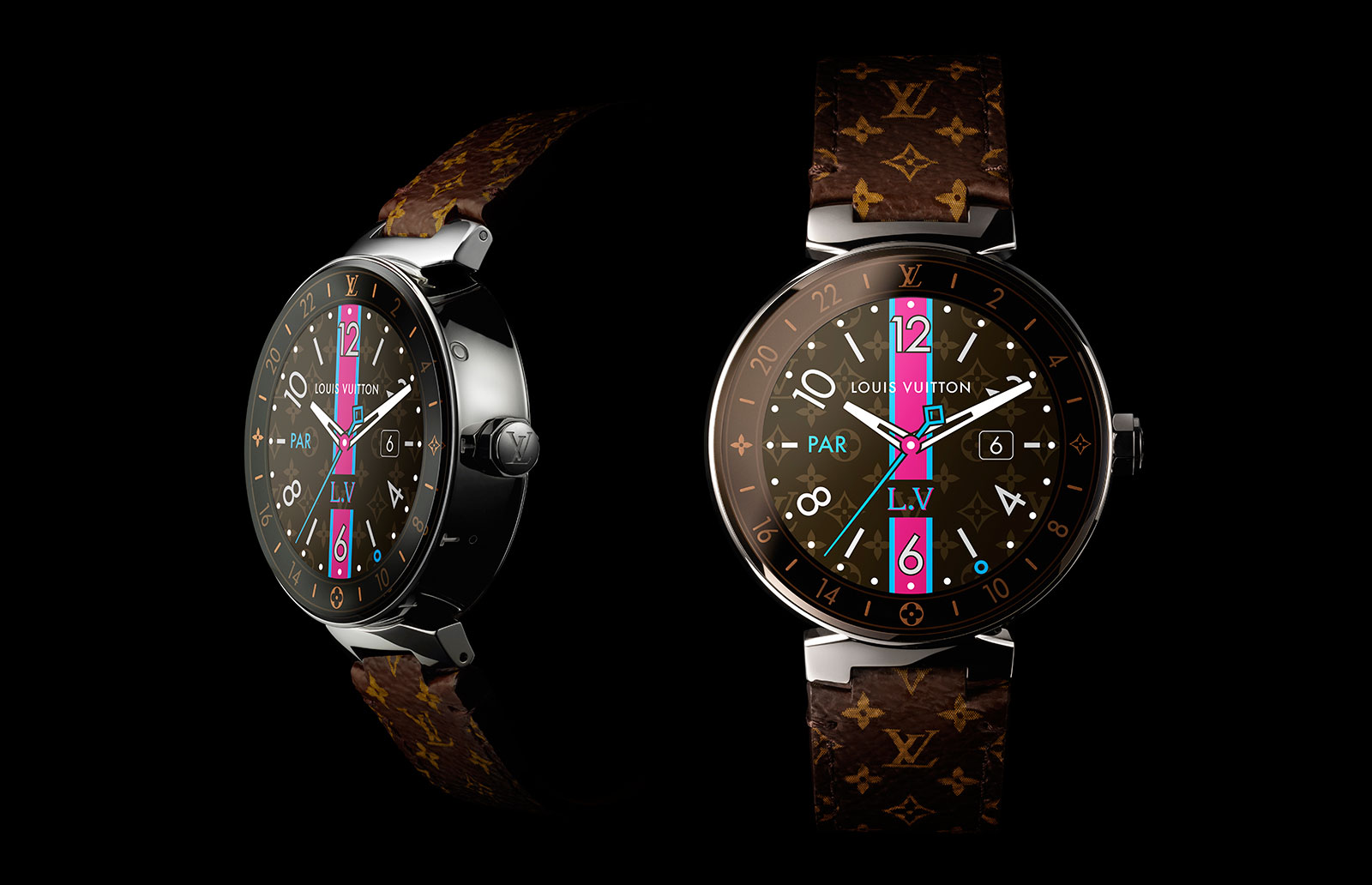 The first wearable from Louis Vuitton is intended to look as much like a conventional watch as possible, coming to market two years after its sister company TAG Heuer unveiled their first smartwatch. Running on Google’s Android operating system and powered by a Qualcomm chip, the Tambour Horizon is likely the first in a suite of connected items to come from Louis Vuitton.

Based on the new, concave Tambour Moon watch case and 42mm in diameter, the Tambour Horizon is largish watch but small for a smartwatch (compared to the recent 46mm Montblanc smartwatch for instance). Compatible with both Apple and Android smartphones, the Tambour Horizon has everything a smartwatch is expected to, including email and text notification, fitness tracking, alarm, and world time, though it lacks a heart rate monitor. It charges via a magnetic dock and will run for a day on a full charge. A multitude of watch faces are available, ranging from the brand’s Monogram to the Escale Time Zone. Further customisation can be done with the easily removable strap – unlocked via button on the rear – that is available in leather, fabric and rubber. Thirty different straps are available, and the straps will also fit the mechanical Tambour Moon watches, as well as be retrofitted to the first generation Tambour watch case. The Tambour Horizon includes several proprietary features, including the Louis Vuitton City Guides. Originally a series of small books in paper, City Guides is integrated into the smartwatch and alerts the wearer to sights, shops, hotels and restaurants nearby. Another unique app is “My Flight”, which helps organise travel information like flight time, gate number, travel duration and so on, though these must be programmed into the watch in advance by emailing the e-ticket to an automated server.

And in a nod to the vast commercial potential of China, the Tambour Smartwatch is entirely compatible with the country’s social media platforms like WeChat and Weibo. Interestingly, the Tambour Horizon is assembled in the United States, with the steel watch case produced in the same Swiss facility where conventional Louis Vuitton watch cases are made. Louis Vuitton did not reveal where the electronic insides are produced.

The Tambour Horizon is available in three different case finishes: Graphite (brushed steel), Black (black-coated steel), and Monogram (polished steel). The steel models cost US$2450 or S$3700, while the black is US$2900 or S$4500. Those prices are for the watch on a black rubber strap, other straps cost extra and additional straps are also available separately.