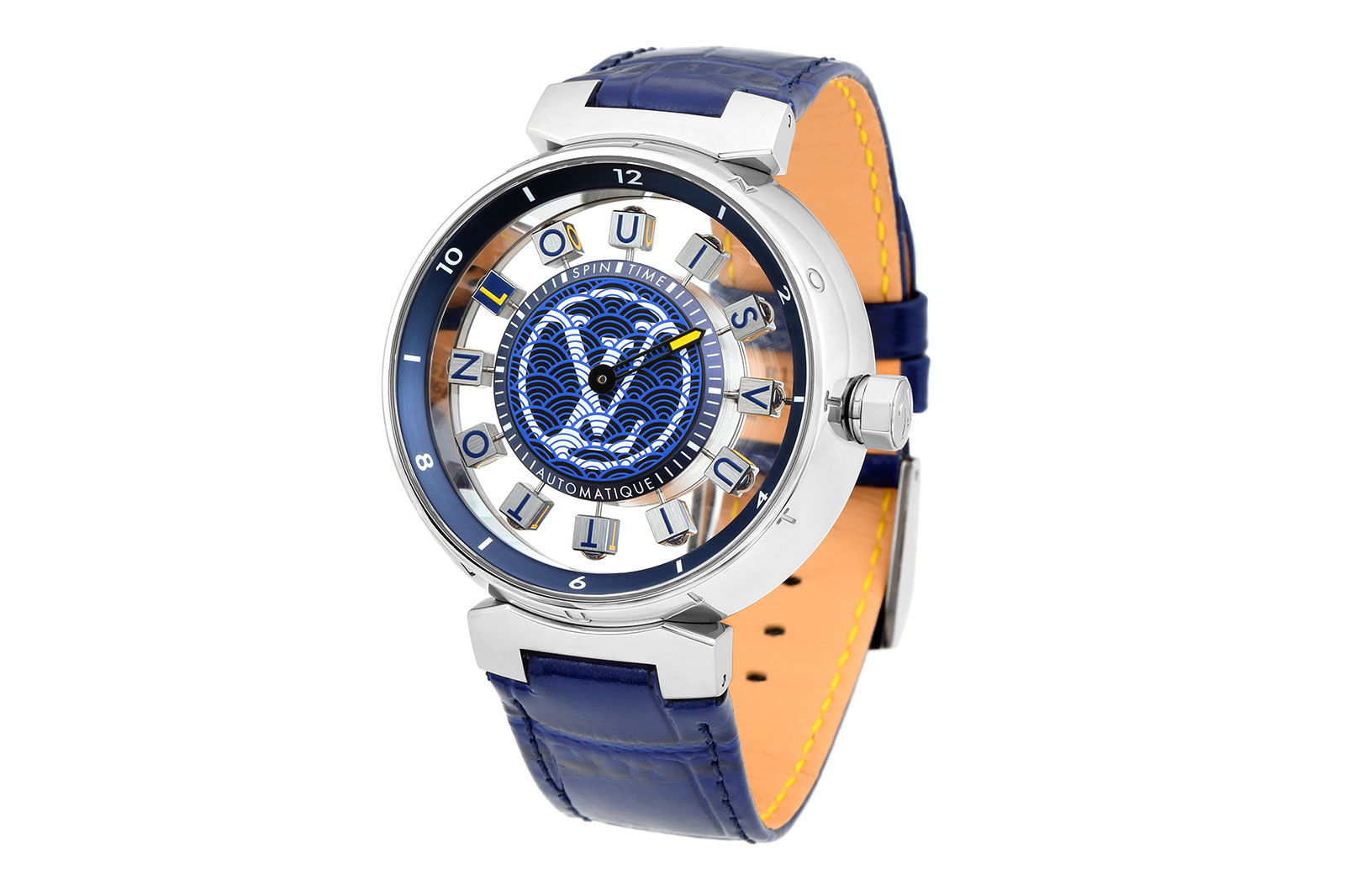 Drawing inspiration from the Japanese culture, the edition is made up of both a men’s and women’s model, each decorated with a motif that is distinctly Japanese. 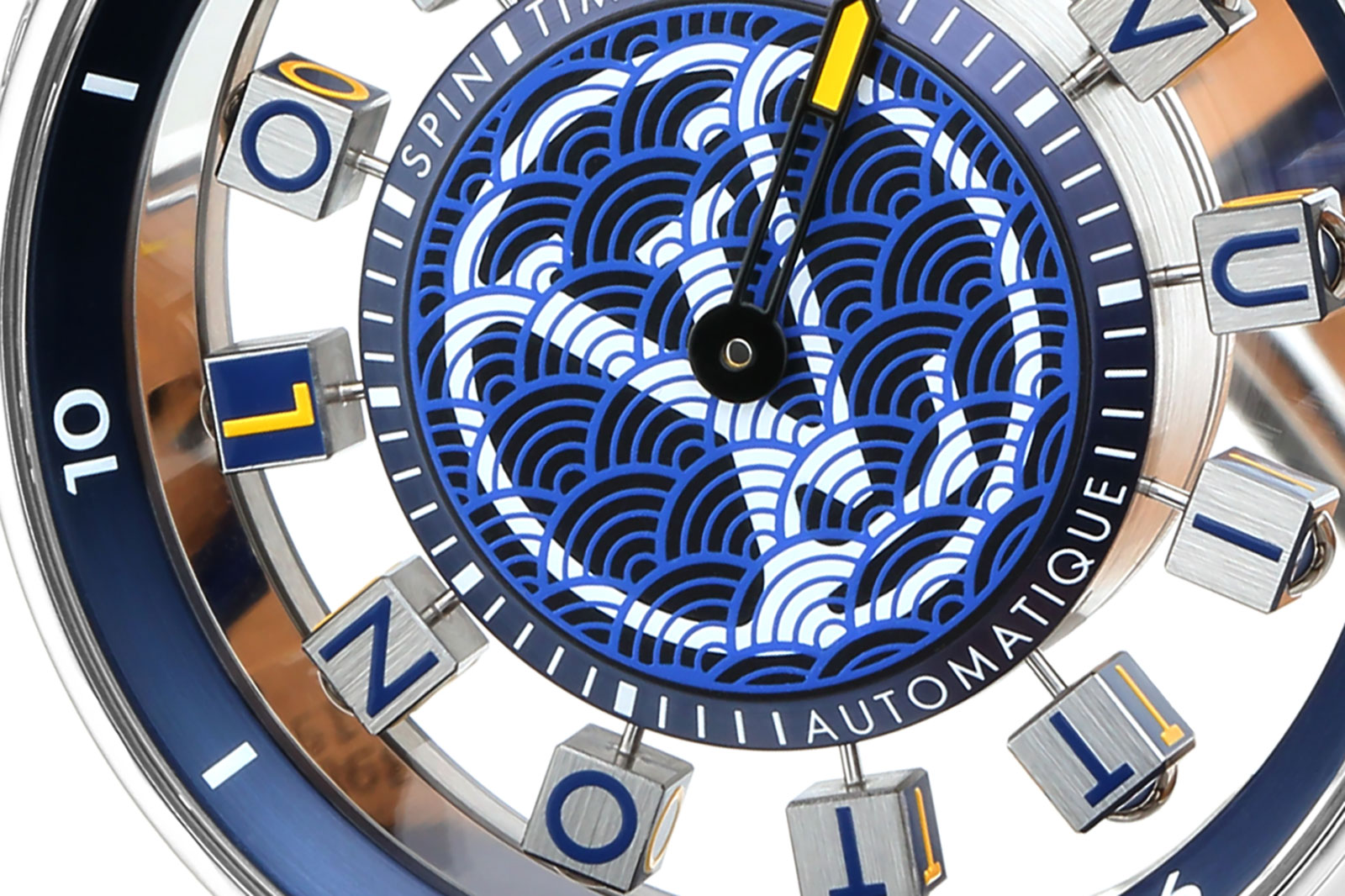 With both versions having the same 42.5 mm Tambour case – tambour is French for drum and the very first case design of the brand – they are largish watches with great wrist presence, but they sit high on the wrist due to the case thickness (which is a consequence of the complication). But thanks to the relatively short lugs the case wears quite well. The case, however, is well proportioned – the large size suits the unique time display, with sufficient empty space to showcase the floating Spin Time complication.

Reminiscent of the work of independent watchmakers like Urwerk and Ludovic Ballouard, the Spin Time display is inventive and different, but also easy to read, illustrating Louis Vuitton’s investment in making watches. But it is expensive, starting at US$80,000 for the men’s version.

The dial is probably the biggest highlight of this Japan limited edition pair. The men’s version has a dial featuring seikaiha, or 青海波 – literally “blue sea waves” – a repeating motif that is centuries-old and frequently encountered in Japan. 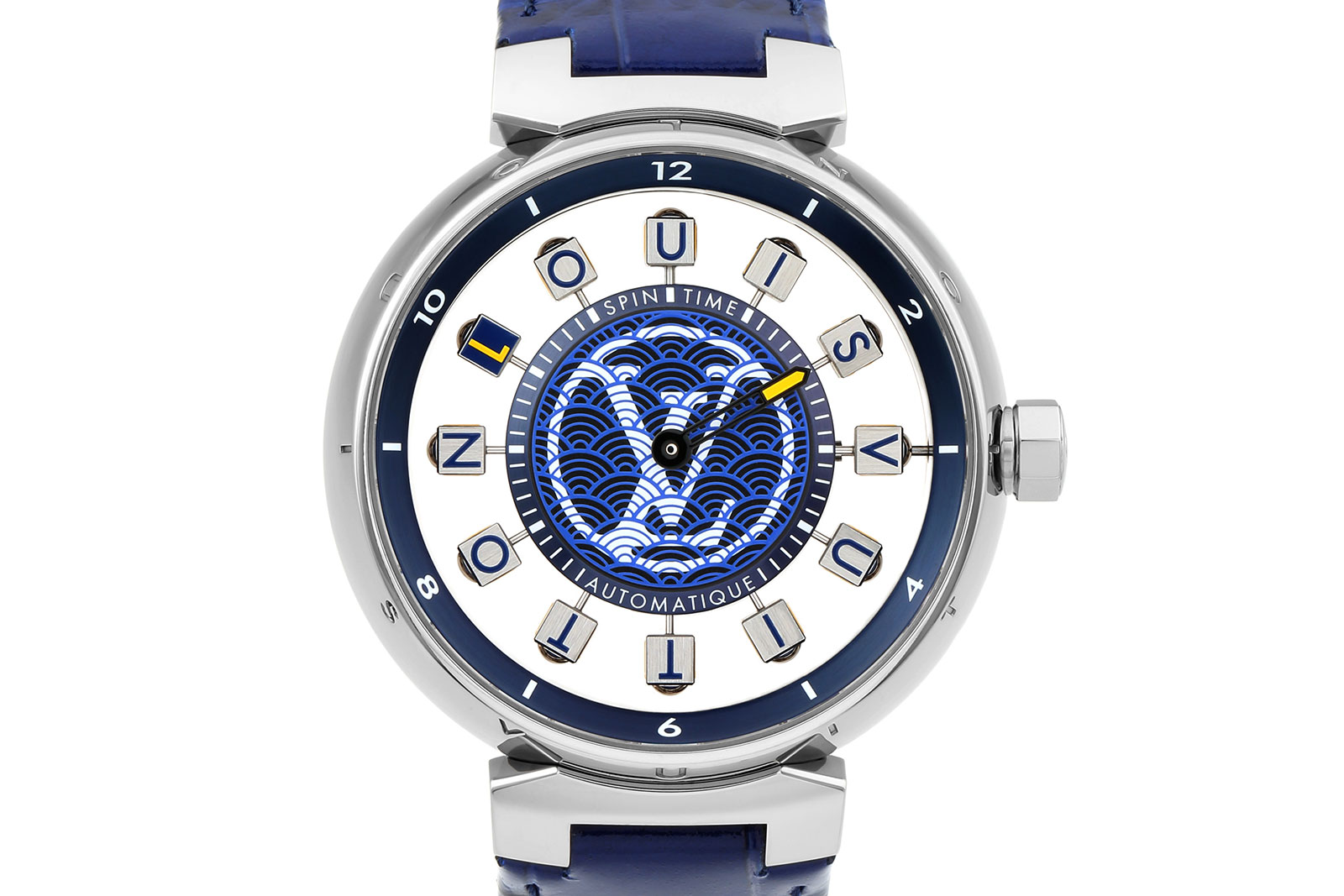 The women’s version is generous in its use of precious stones to create a whimsical dial inspired by the four seasons, with each season represented by a motif incorporating the Louis Vuitton monogram – sakura for spring, fireflies for summer, maple leaves for autumn, and snowflakes for the winter. Altogether, the case is set with 108 sapphires totalling 1.33 carats and six tsavorites weighing 0.46 carats. Additionally, there are 142 white diamonds on the dial and and lugs. 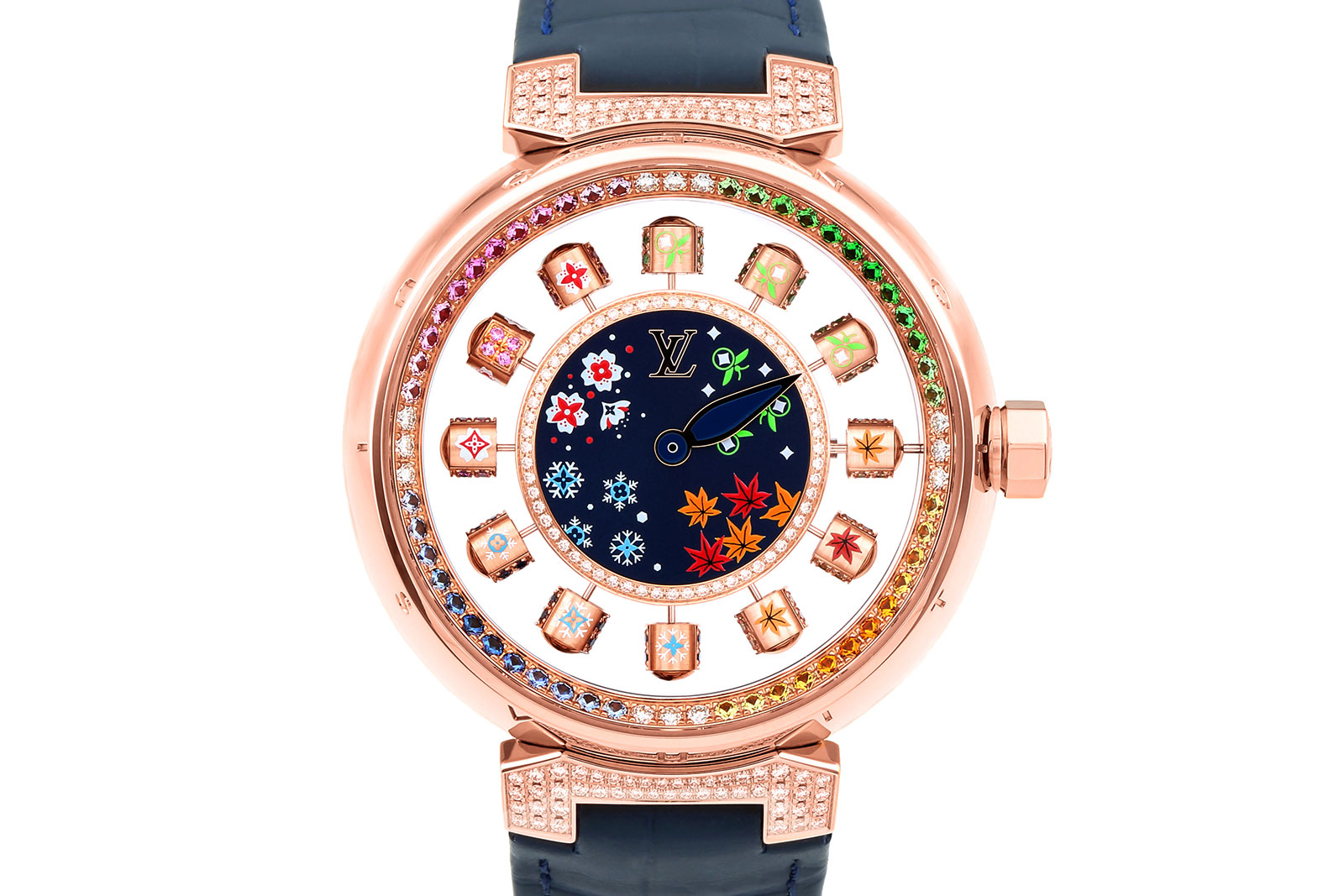 The Spin Time utilises twelve cubes, each featuring Arabic numerals and totems on the opposite faces. At the top of every hour, two of the cubes rotate instantaneously, the cube for the preceding hour rotates to show a totem, while the subsequent cube rotates to show the Arabic numeral to indicate the current hour. The men’s version indicates the current hour with a blue-faced cube, while the women’s version relies on the gem-set face of each cube. 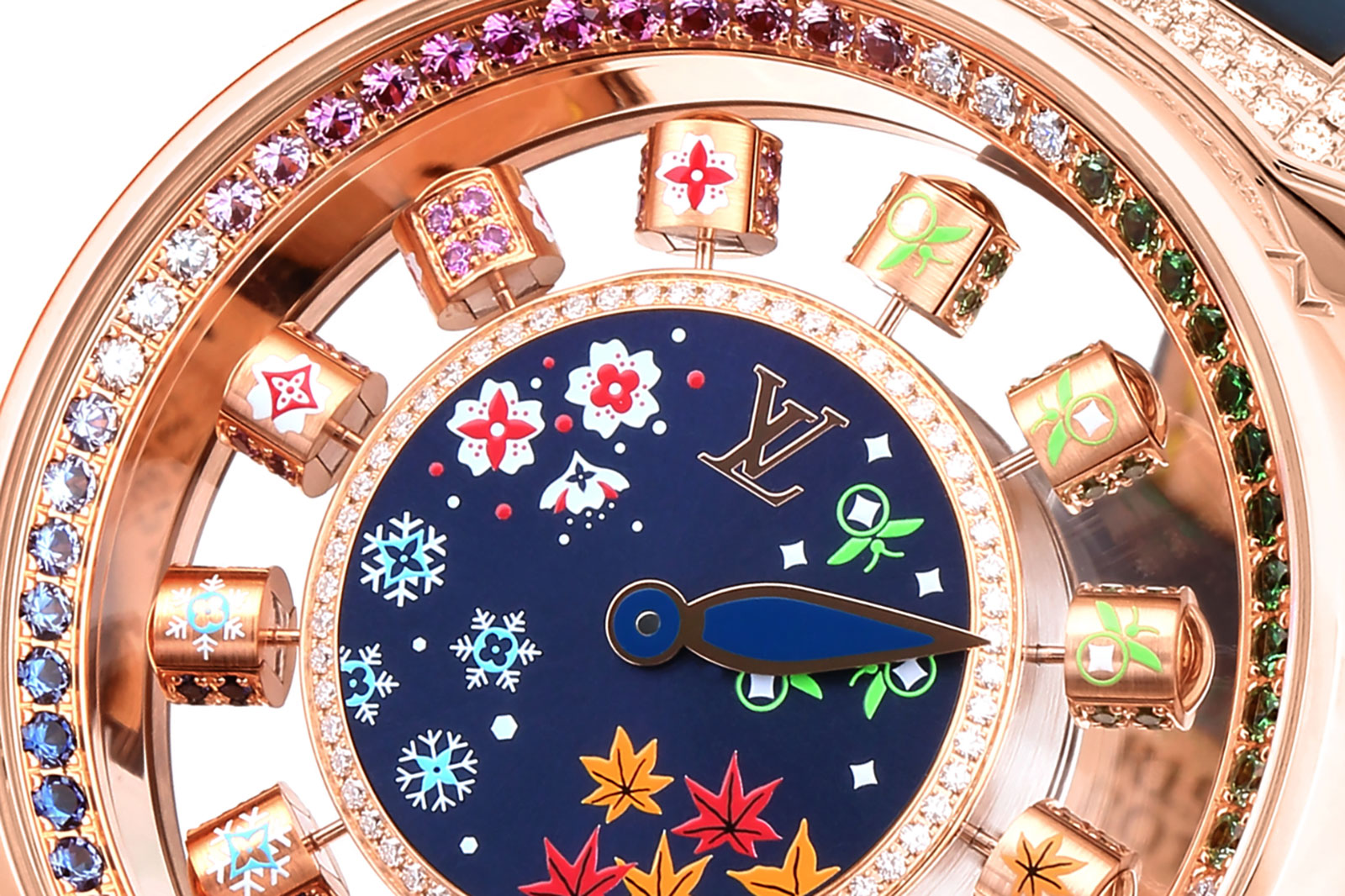 And the Spin Time Air gets its name from the floating construction of the cubes. As each cube is connected to the movement with a long pinion, the result is the cubes seemingly suspended within the case.

The Spin Time Air is powered by the LV88, a movement was developed in-house by LFDT. A small but tall movement, the LV88 floats in the middle of the case, held in place by a sapphire disc, with the stem for the crown being the only connection to the case.

Availability: Already at boutiques in Japan, Southeast Asia, and Oceania