A surprising combination of mechanics and electronics, the Louis Vuitton Tambour Spin Time Air Quantum is the latest watch to emerge from La Fabrique du Temps, the manufacture acquired by luxury giant in 2011. The Quantum is a new take on the brand’s signature complication – a hidden LED ring lights up the 12 cubes of the jumping hours. 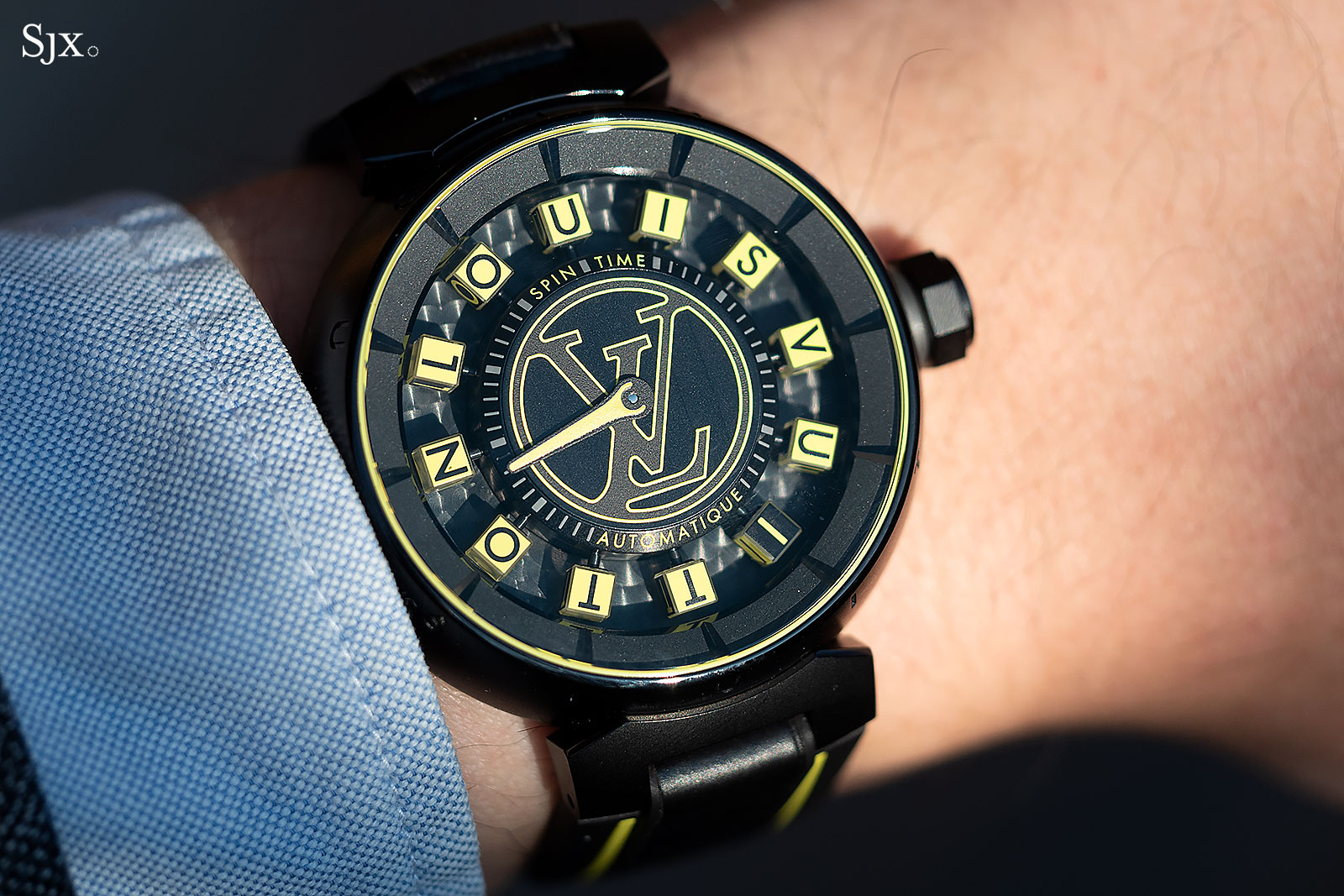 The Spin Time is an original and distinctive concept that doesn’t get recognition it should, largely due to the fact that Louis Vuitton is all about fashion and leather goods. And the complication took more than a decade to mature into what it is.

The Spin Time was launched in 2009 as a regatta countdown, which wasn’t especially interesting (while also being expensive at the time). It was only with the Spin Time Air that the complication became truly noteworthy, but the length of time required to get there meant some momentum was lost.

I like the complication, though it is also hindered by the modest base movement (more on that below).

Basically a Spin Time Air with a dose of levity, the Quantum doesn’t take itself too seriously, but preserves all the mechanics of the Spin Time complication. It’s a smart take on the light-up mechanical watch, the first one that manages a long-lasting bright light.

Though the aesthetic is largely two colours, it is a loud design, especially with the oversized “LV” on the dial. But that is exactly the point, and I do like the over the top nature of many of Louis Vuitton’s designs (for something monochromatic and low key there is always Chanel).

Like many of the brand’s other watches, the Quantum is a large watch, though it feels smaller both visually and tangibly. The black-coated case reduces its visual footprint, while the fact that it’s titanium means it’s lightweight. And it is unusually light, because the case has fairly thin walls due to the width of the cubic display. 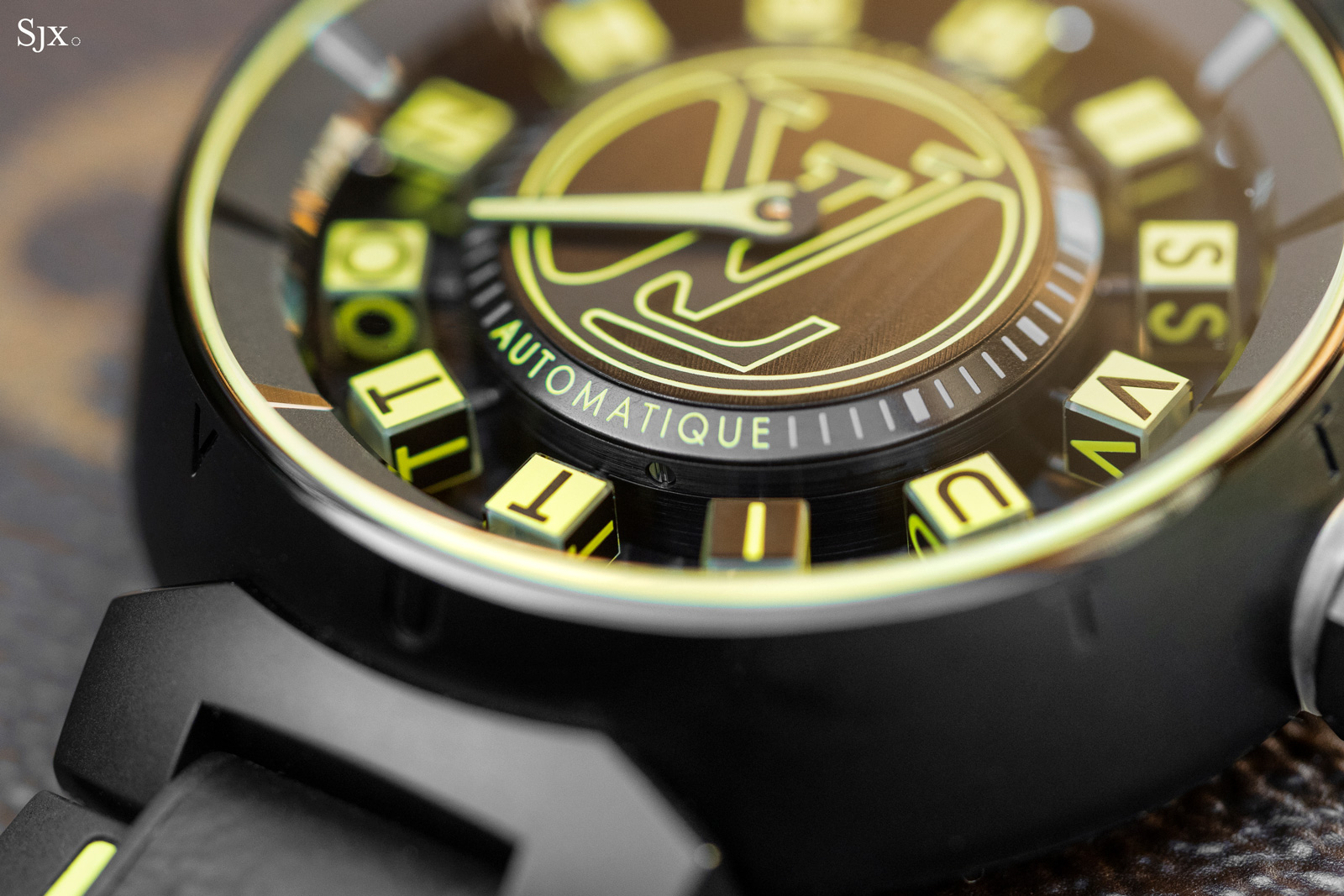 Where the watch does fall short is the base movement, which is an ETA or Sellita automatic. Granted Urwerk started out with the ETA Peseux as a base and Ludovic Ballouard still does, but the expectation today is at least a high-end outsourced movement or a proprietary calibre.

Either would make the Spin Time far more compelling. But given the trajectory of Louis Vuitton’s development as a watchmaker, an in-house movement doesn’t look to be far off. That would elevate the appeal of the Spin Time (though it would probably be accompanied by a equally elevated price hike).

Louis Vuitton debuted the Spin Time in 2009, the same year Ludovic Ballouard introduced his Upside Down. However, the first Spin Time was neither refined nor sophisticated as it was essentially a cubic regatta countdown function with five cubes to count the time before a yacht race. The concept became truly impressive with the “floating” Spin Time Air that debuted a few years ago. 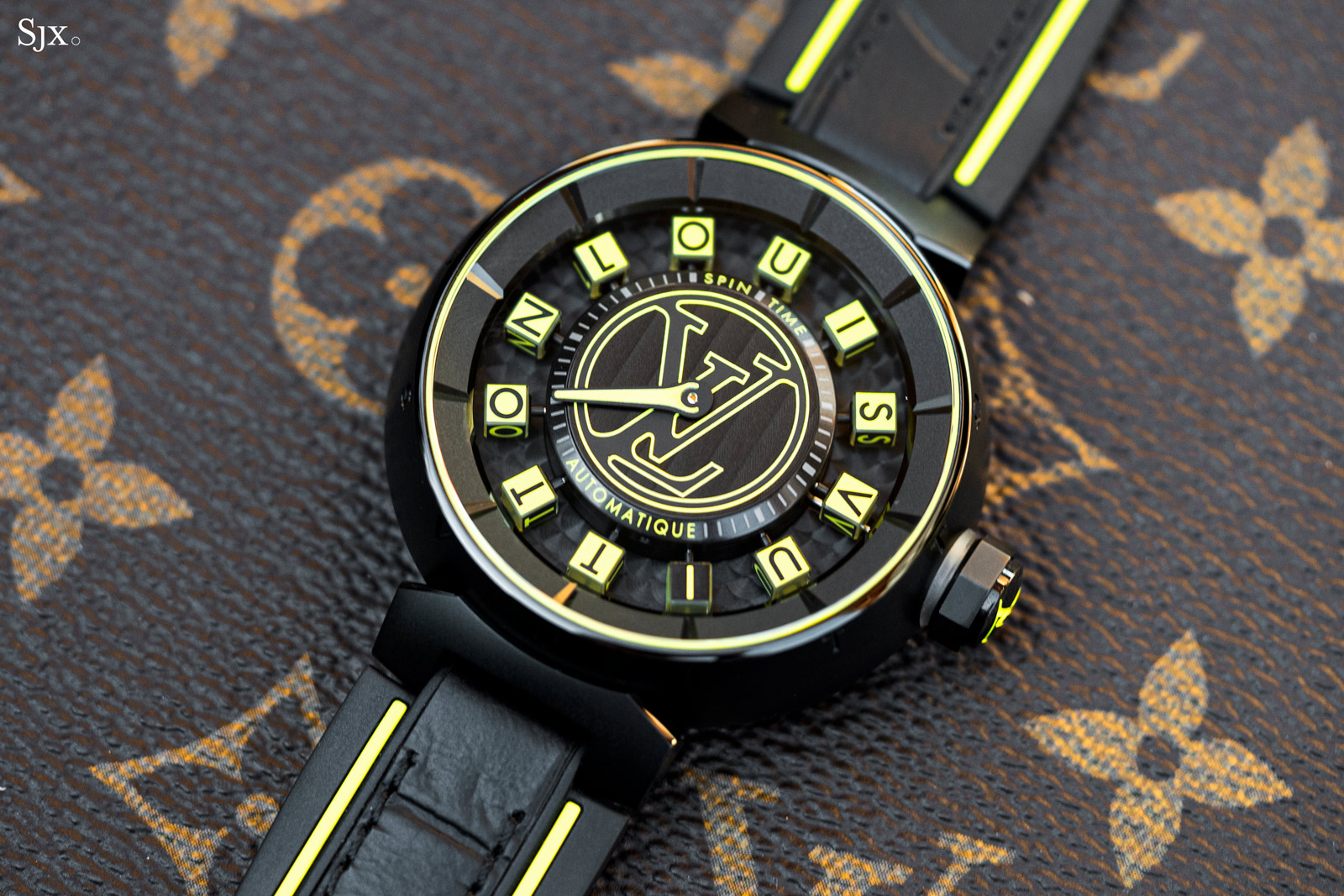 At 42 mm wide and a bit over 12 mm high, the case is not large, though it feels bigger than it is due to the tall, sloping flanks and narrow lugs, though the DLC finish leaves it seeming a bit smaller than usual

The Quantum is essentially a conventional Spin Time Air with the addition of a compact LED ring. Though it’s not the first mechanical wristwatch with a light module – De Bethune and Van Cleef & Arpels have done it before – the Quantum is the first one to have a light function that is durable and bright.

Its luminosity is a consequence of the approach taken. Past watches with similar functions relied on a dynamo, which necessarily produces a dim and short-lived illumination. The De Bethune DB28GS, for instance, uses the mainspring to power the dynamo, which means that the power reserve diminishes rapidly as the LED is activated.

In contrast, Quantum opts for a simple but effective solution, a pair of watch batteries. Activated by a button in the crown, LED ring lights up for three seconds, but also remains lit as long as the pusher is depressed. The batteries are enough to keep it going for three years even with the LED ring being “activated six to seven times a day, every day” according to Louis Vuitton.

The LED ring was developed by a Swiss electronics specialist, which was given a mandate of an unchanged case size as well as easy serviceability. As a result, the LED ring adds nothing to the overall dimensions of the case. Both the standard model and Quantum have exactly the same external dimensions.

And serviceability led to the two standard watch batteries secured by a discrete battery holder. The batteries can be quickly replaced at a Louis Vuitton store without having to touch the rest of the movement. While the standard Spin Time Air has a “mystery” rotor visible, the Quantum has a metallised circuit board emblem on the glass back

The LED ring is an add-on module that has no mechanical connection to the movement, leaving the mechanical aspect of the Quantum unchanged, so the time display operates in exactly the same way as in a standard Spin Time Air. 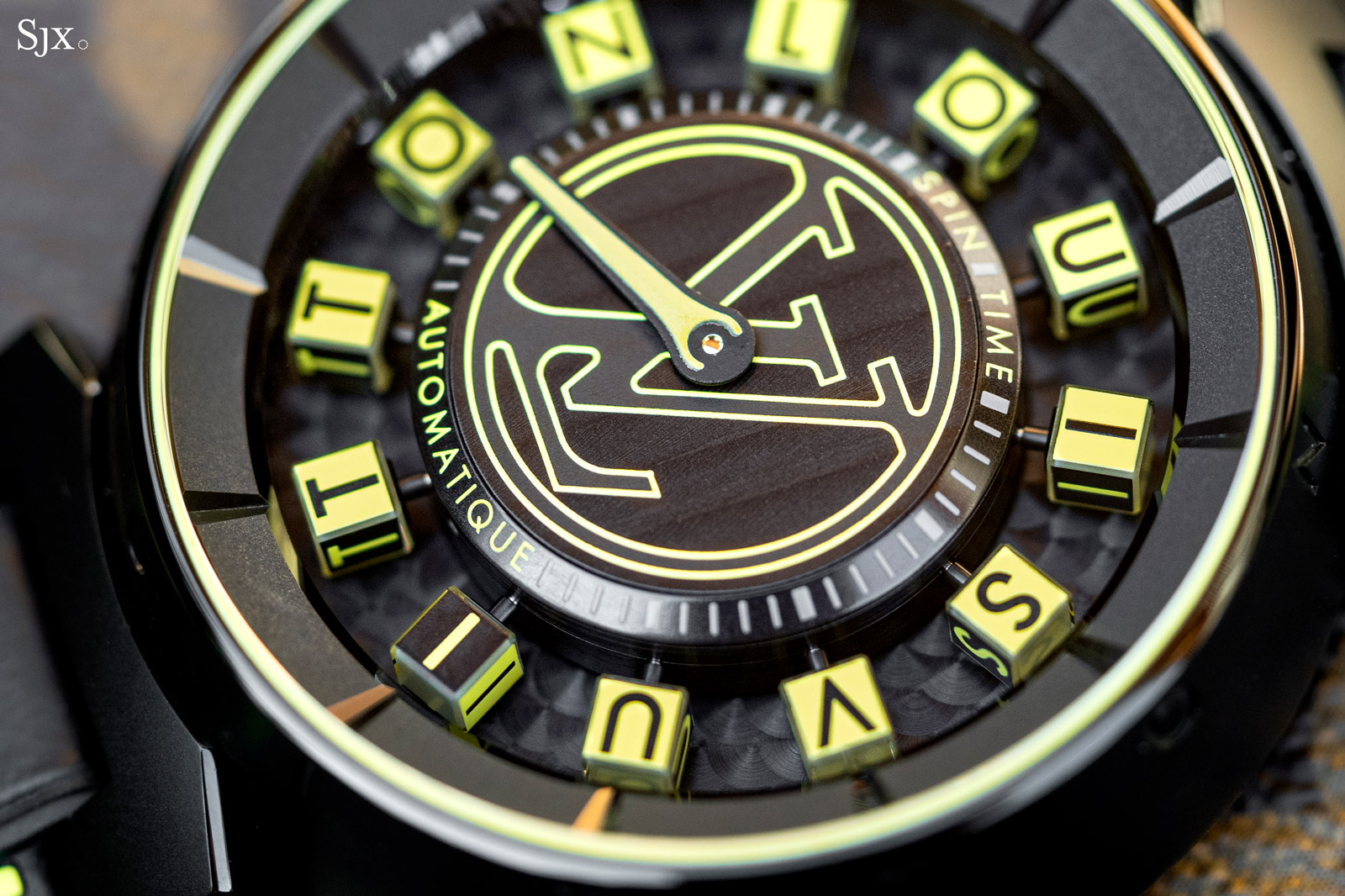 The jumping cube mechanism is a module that sits on the base movement. Louis Vuitton is tight lipped about the base, but it is probably a Sellita SW100 or ETA 2671 (both largely identical, with the former being a “clone” of the latter), workhorse movements developed for ladies watches.

Like most such displays, the Spin Time relies on a Maltese cross gear for the jumping motion, but executed in an unconventional manner. Because the cubes are three dimensional – as opposed to the flat, single-plane display of conventional jumping hours – each cube is driven by a Maltese cross positioned perpendicular to the plane of the movement.

More unorthodox is the mounting of the movement within the case. It is held in place by two sapphire discs, a full disc on the front and another on the back, plus a donut-shaped plate midway along the height of the movement. The standard Spin Time Air with its “floating” display

While the standard Spin Time Air has cubes made of aluminium, the Quantum has them in fused silica, a type of glass that composed almost entirely of silicon dioxide. The high purity makes it especially useful for optical applications. 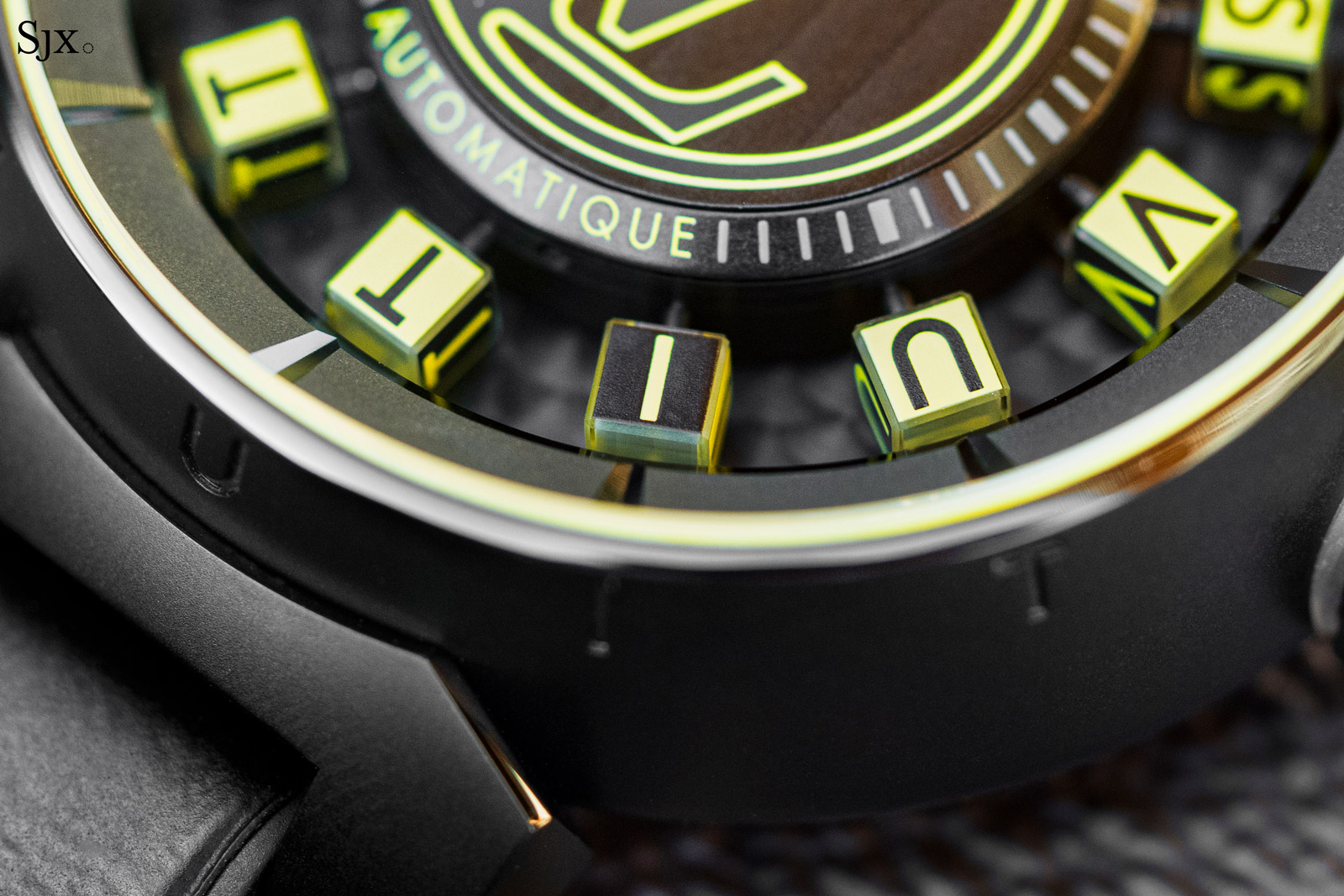 While the four faces of the cubes that indicate the hours are printed with the letters of the brand name, the chamfered edges as well as top and bottom faces of the cubes remain clear. As a result, the white light from the LEDs positioned on the top face of each cube creates the appearance that the cubes are lit  from within.

Though not apparent due to the black finish, the dial is surprisingly detailed, especially with the flange around the cubes that serves as a cover for the LED ring. The flange is frosted but features an inner rim and hour markers that are milled with a diamond-tipped bit, giving them a mirrored finish. With its simple but effective approach of LEDs powered by batteries, the Quantum is the most useful light-up mechanical watch to date. And the concept is a perfect complement for the Spin Time complication. It could be improved with a superior base movement, but that is a matter of time. 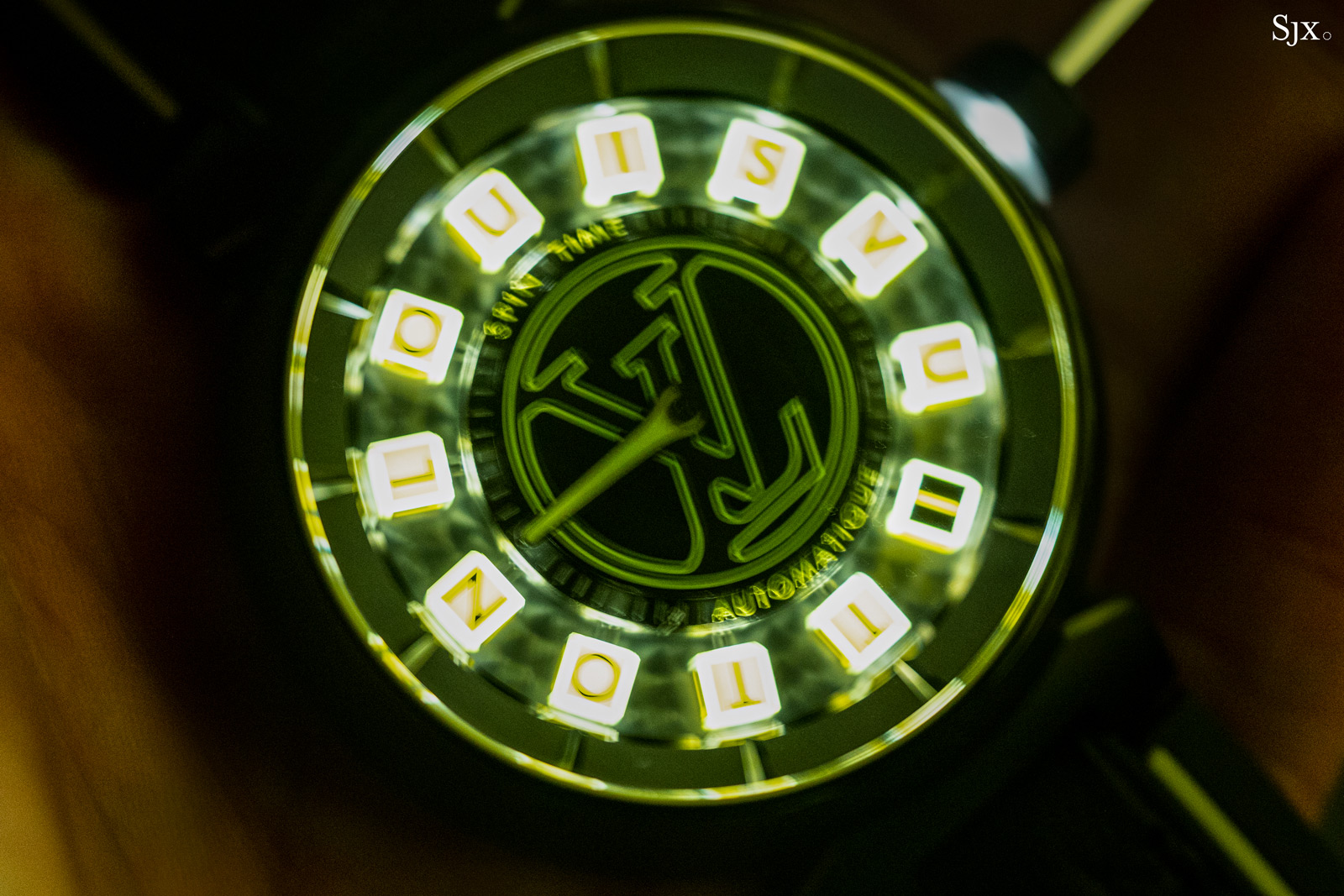