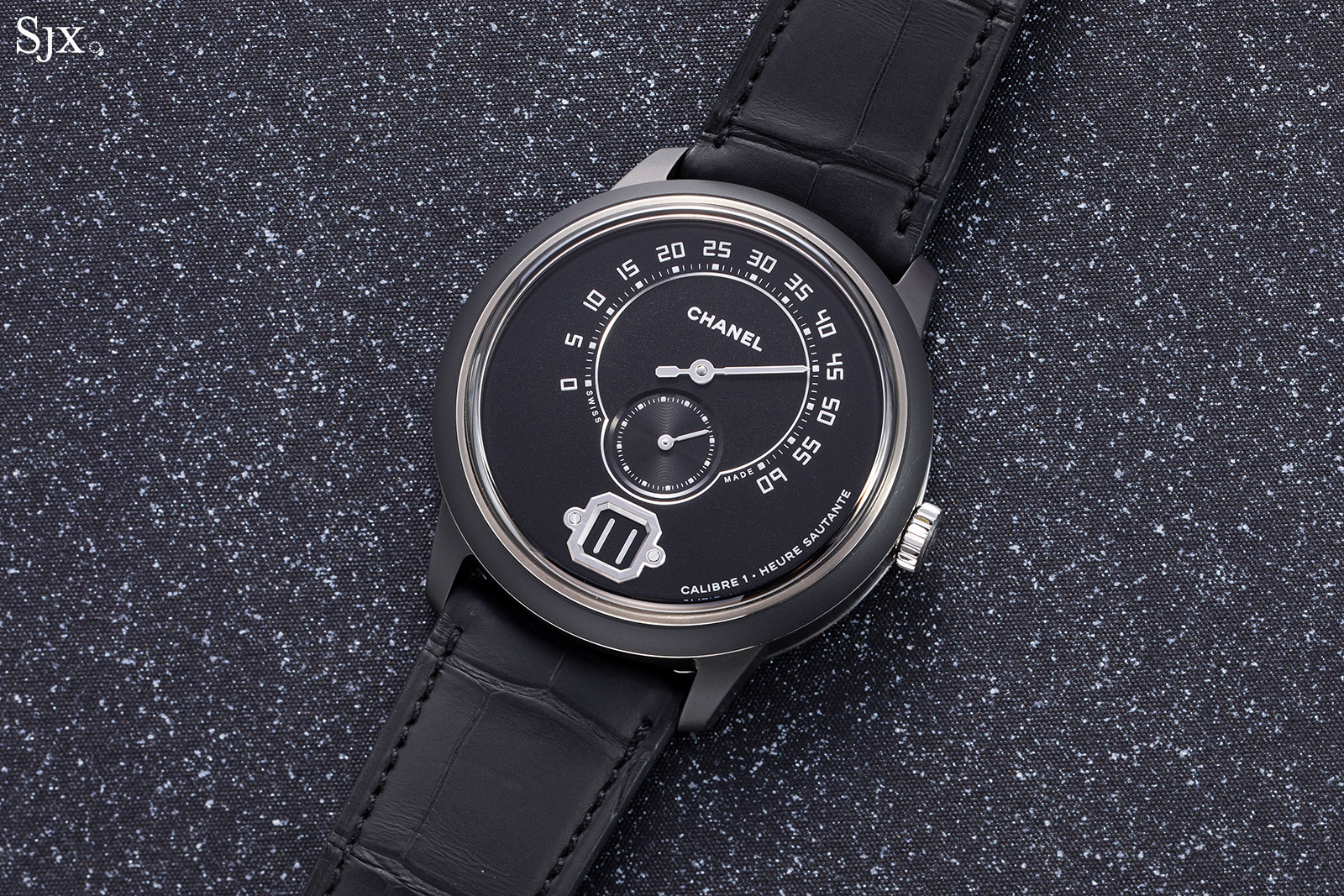 Chanel’s best known watch is unquestionably the all-ceramic J12, now in its refined and upgraded second generation. But its most interesting watch – from a mechanic and design perspective – is the Monsieur de Chanel. Originally offered only in precious metals, the watch was last year given a stylish makeover with the Monsieur Édition Noire that’s clad entirely in matte black ceramic.

A jumping hour with retrograde minutes, the Édition Noire is powered by the Calibre 1, an original, integrated movement produced with help from independent watchmaker Romain Gauthier. But equally important is its design, which is discreetly brilliant.

The watch has the sort of thoughtful aesthetic that pays attention to the whole but also the details – the typeface used on the dial was designed expressly for the watch – that is expected from the grand Parisian fashion house. In fact, the design is more coherent and informed than many watches created by traditional watchmakers. 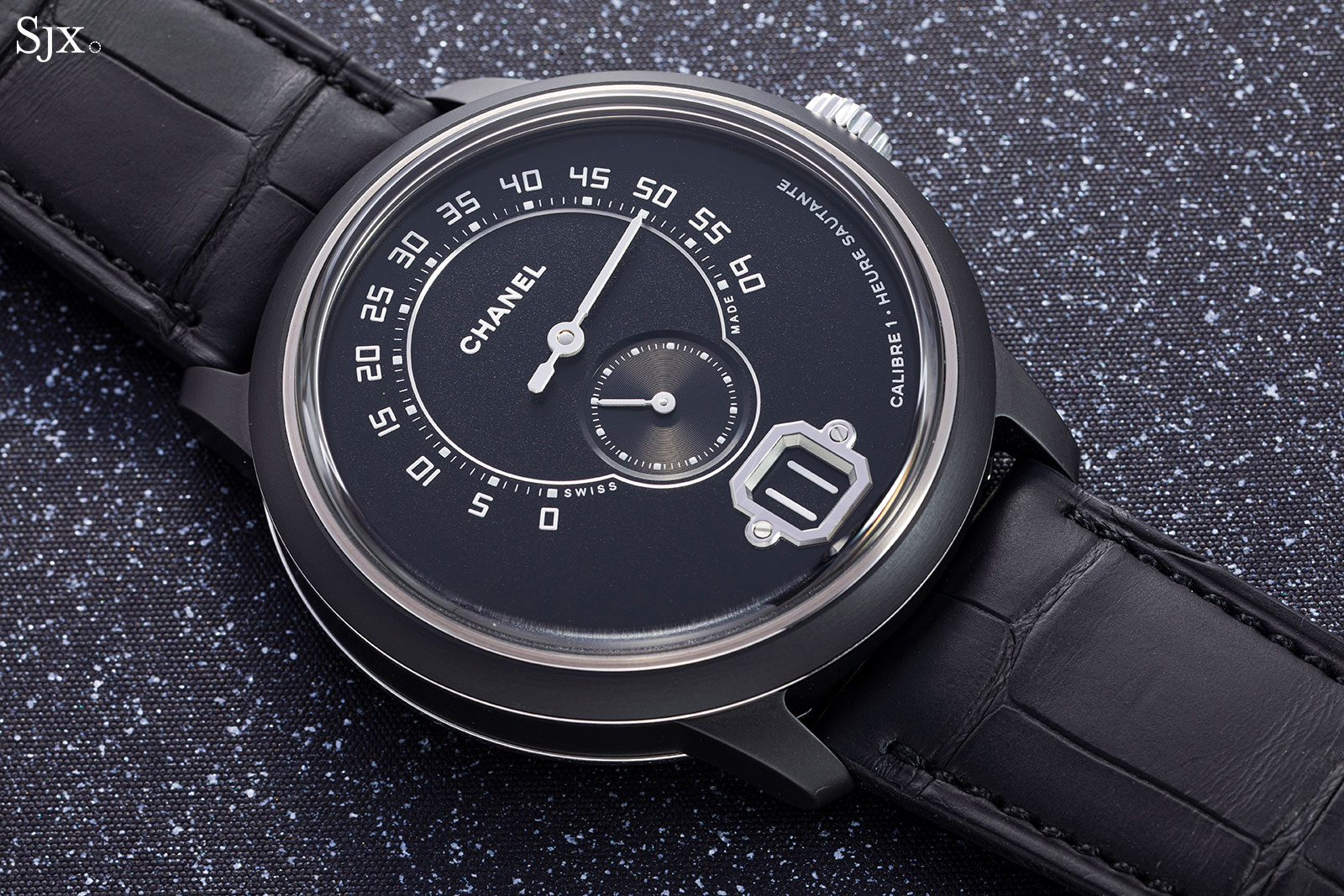 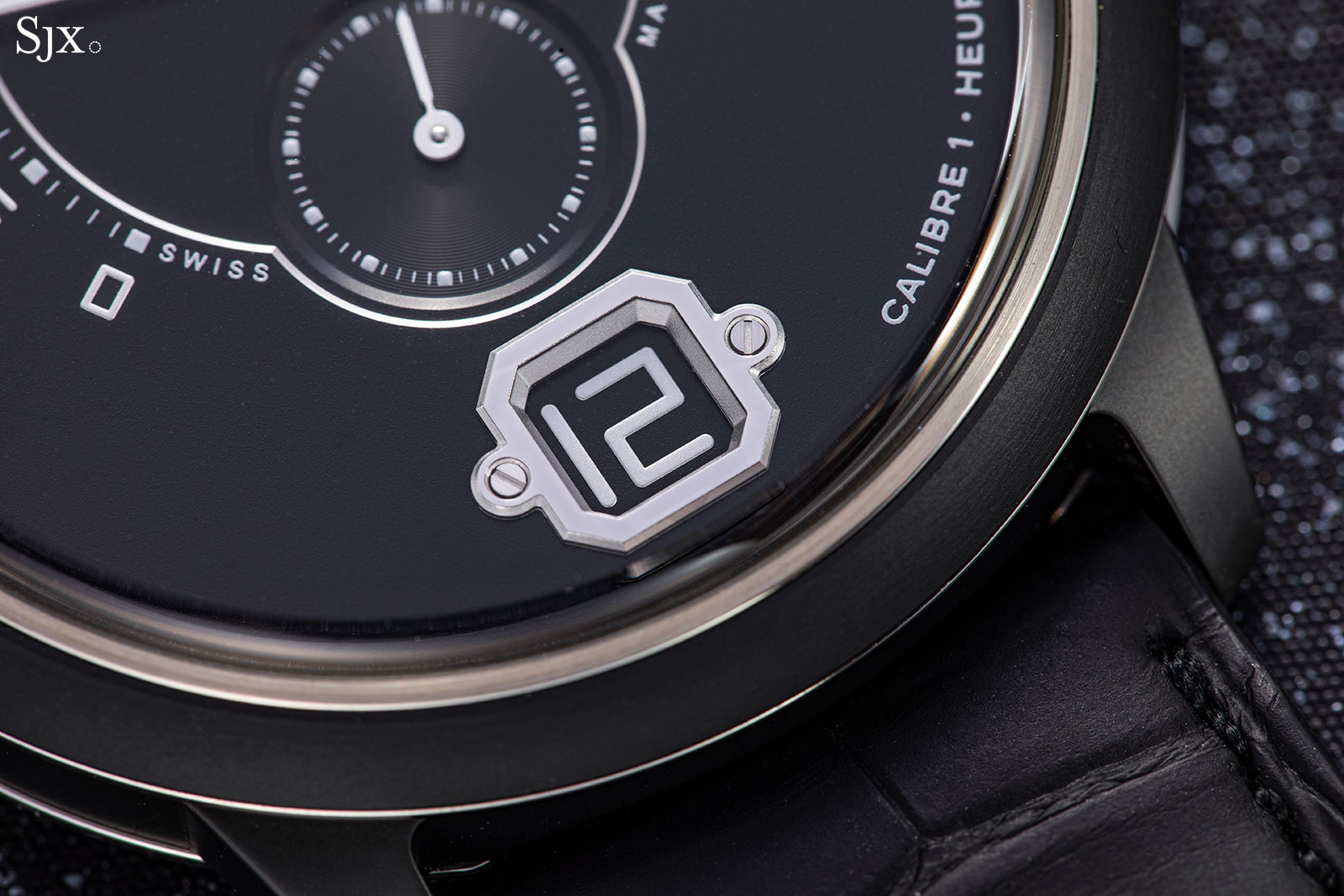 The Chanel elements of the watch are subtle, like the octagonal frame for the hours inspired by the Chanel No. 5 perfume bottle

Like other luxury fashion houses, Chanel has been working hard to make proper timepieces, watches that are well made and equipped with respectable movements. Earlier this year it took a 20% stake in movement maker Kenissi, in a joint venture with Tudor, which now produces calibres for the face-lifted J12.

Kenissi is merely the latest investment in Chanel’s gradual, decades-long expansion in watchmaking. One of its foundational investments took place in 1993, with the acquisition of G&F Chatelain, a case and bracelet maker that Chanel has grown into one of the industry’s largest; its site in La Chaux-de-Fonds is now also headquarters for the company’s watch division.

Then in 1998 Chanel took a minority stake in Bell & Ross, which it has since increased to a majority. And last year, the siblings who own Chanel, Alain and Gerard Wertheimer, acquired a stake in F.P. Journe via their family office, New York-based Mousse Partners.

But the key ingredient of the Monsieur de Chanel and its Calibre 1 was Chanel’s 2011 investment in Romain Gauthier. Though better known for his eponymous watches like the Insight, Mr Gauthier makes well under a 100 watches a year under his own name.

A good part of his business – which has almost two dozen employees – is producing movement components for other brands. One of those clients is Chanel; Mr Gauthier’s workshop is responsible for manufacturing and finishing the crucial bits of the Calibre 1, namely the “wheels, shafts, pinions, drums, barrel covers and balances along with other turning parts” according to Chanel. 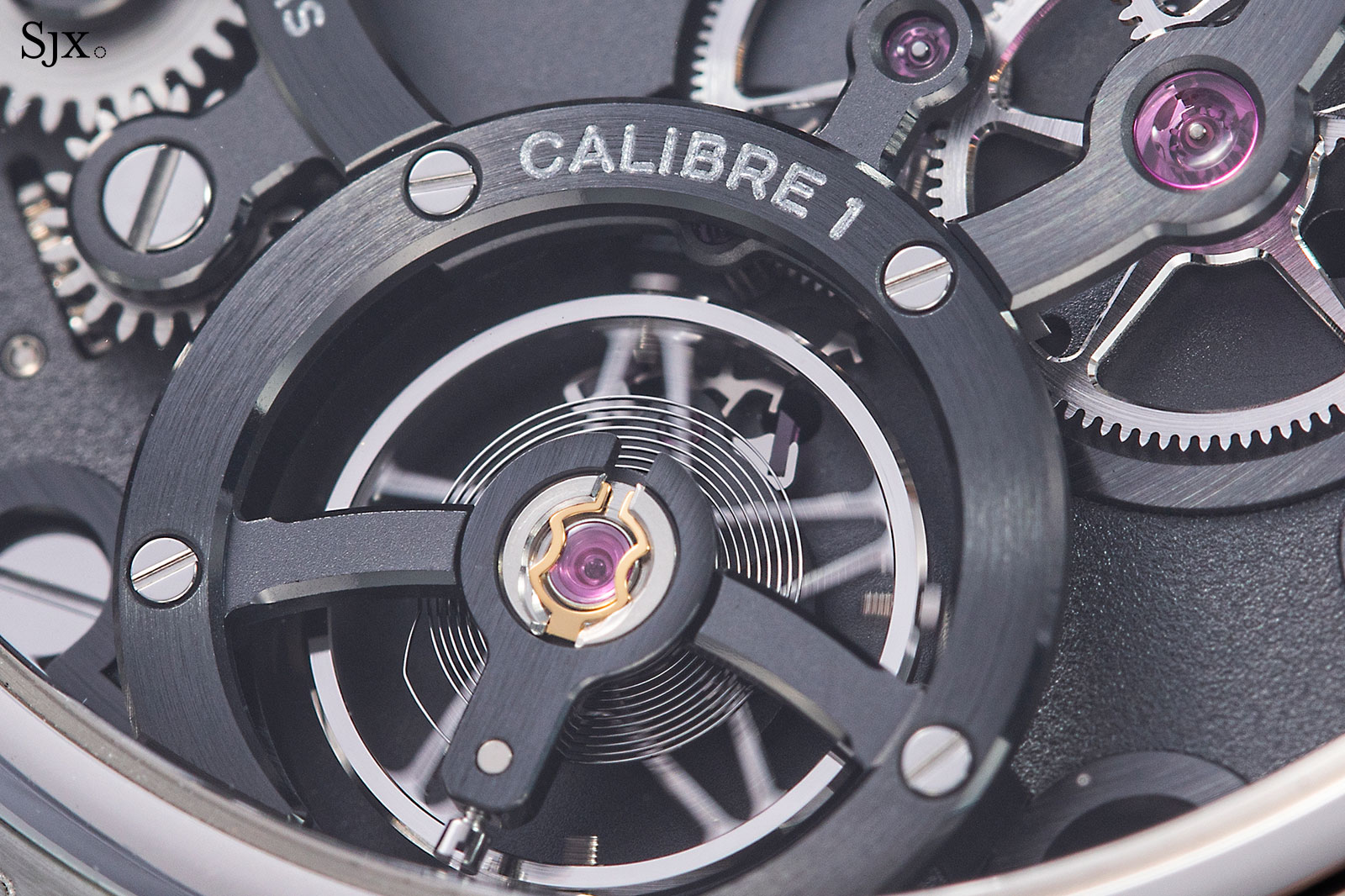 Originally launched in white gold or “beige” gold – an pale gold alloy unique to Chanel – the Monsieur was later joined by luxe versions in platinum, elevated by features like grand feu enamel dials, miniature lion sculptures, and baguette diamonds on the case band. 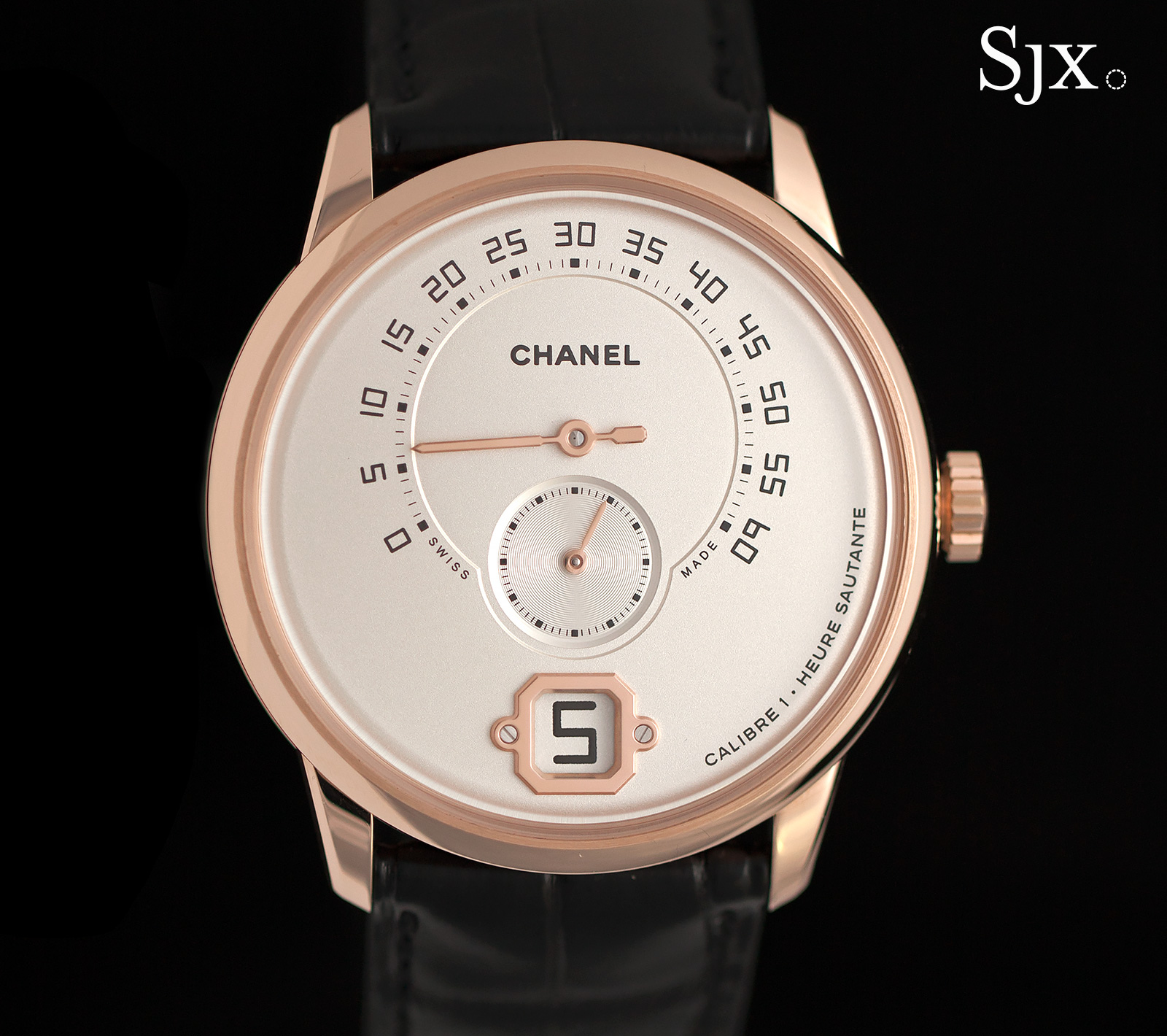 The Monsieur in beige gold

The Monsieur Edition Noire, is the most affordable of the range, priced at US$27,500 – compared to US$35,100 for the same in gold and US$61,300 for the platinum model. Though it is the least expensive, the Edition Noire is the coolest and most distinctive of all the variants.

And the Edition Noire was also different in how it was sold: in an unorthodox move, the watch was offered quietly to Chanel’s top clients in September 2019 via an email invite to register interest on a dedicated website. While most of the 55-piece run was sold during the online offer, a handful of the Monsieur Edition Noire are still available according to Chanel.

An understated and slim watch, the Edition Noire is monochromatic but striking thanks to the clean, geometric dial. It is quite large at 42mm in diameter, but thin at just under 11mm high. So it sits flat and elegant on the wrist, while also looking smaller than it is because of the dark colours. 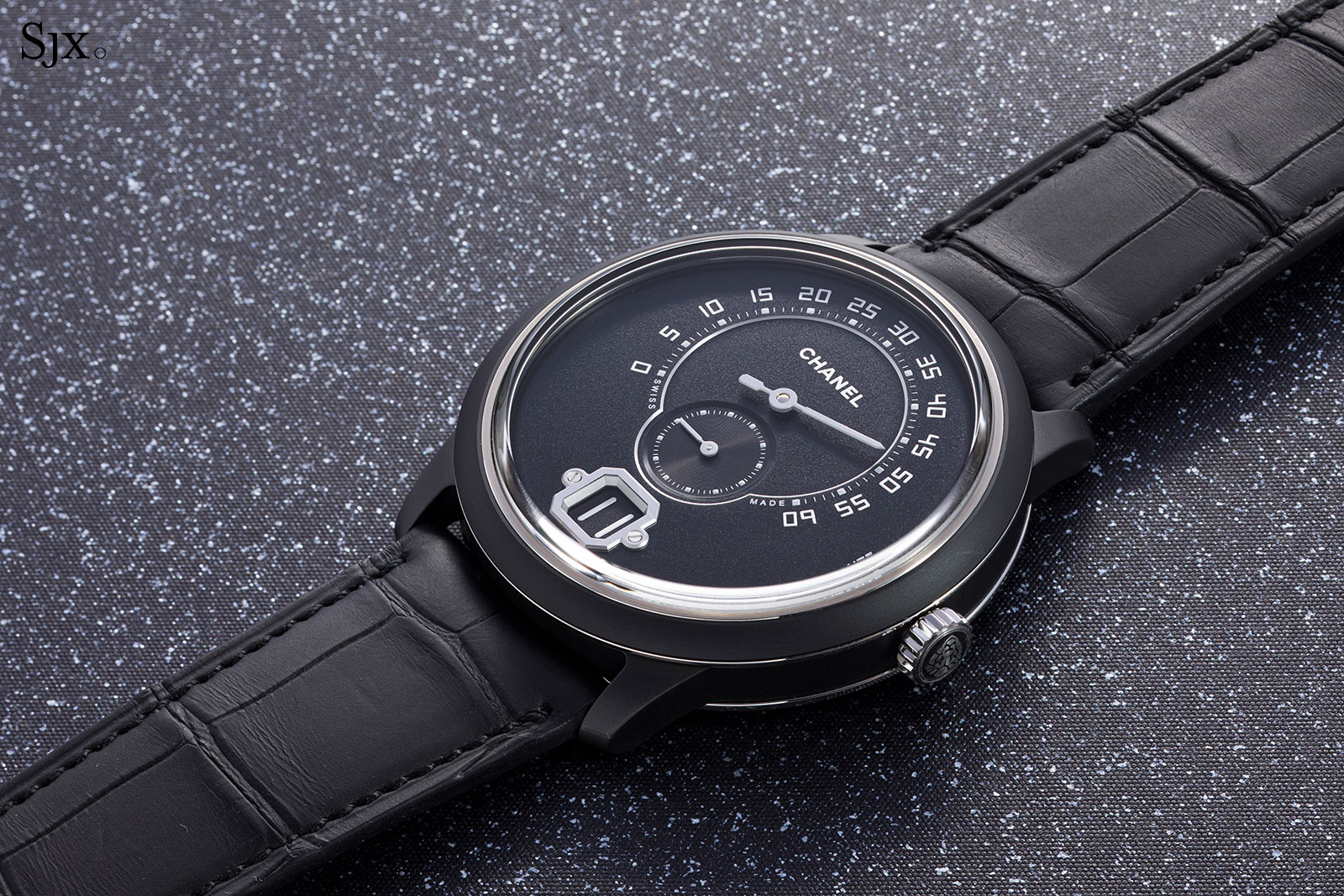 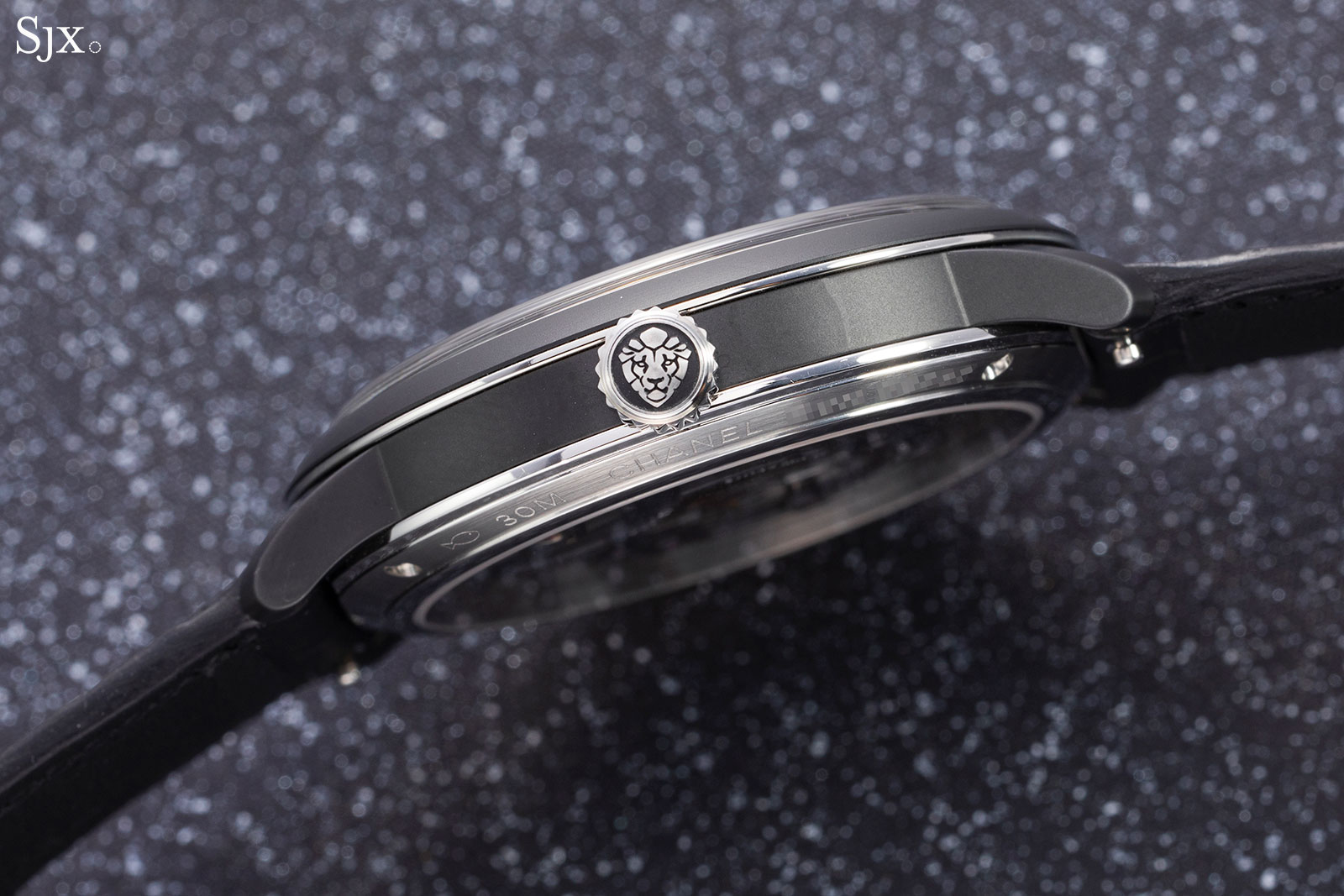 The ceramic case is built in an interesting manner: the case band, which includes the lugs, is made of ceramic, but the case back and bezel are steel.

The bezel and back are secured with screws that screw into the bezel from the back, sandwiching the case band in the middle. And the bezel is capped with a ceramic insert, which is why it appears as ceramic with a steel border.

So the watch is not quite all-ceramic, but attractive nonetheless. 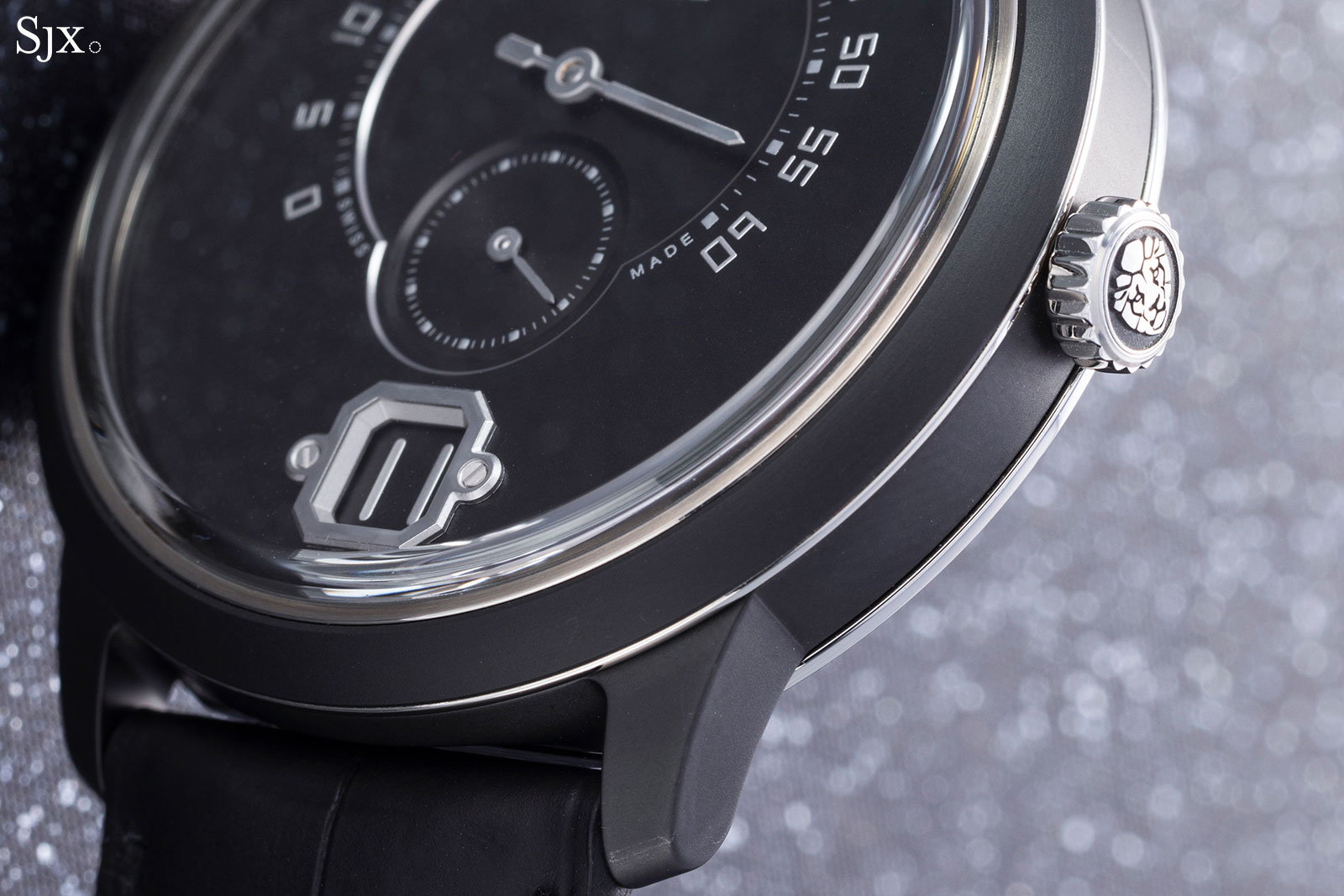 Aesthetics aside, ceramic is fitting from a historical perspective. Though black ceramic is not unusual – it is in fact common – the material is synonymous with Chanel, which helped popularise and democratise it with the bestselling J12 ladies watch (now in its upgraded, second generation).

Being an entirely new design and construction, the watch and movement are an integral whole; all the complications are integrated, rather than modular. The Calibre 1 was designed from the ground up to fit the dial, explaining the cohesive design inside and out.

Perfectly symmetrical in layout, the time display is also arranged vertically as a design choice, in order that it can be read upwards from hours at six to the minutes on top.

Notably, the retrograde minutes travel on an unusually wide, 240° track, an arc much broader than ordinary retrogrades that usually do not cross 90°, and is also adjustable backwards and forwards. Like the dial layout, the wide arc of the retrograde was intentional, in order to complete the circle of the minute track. 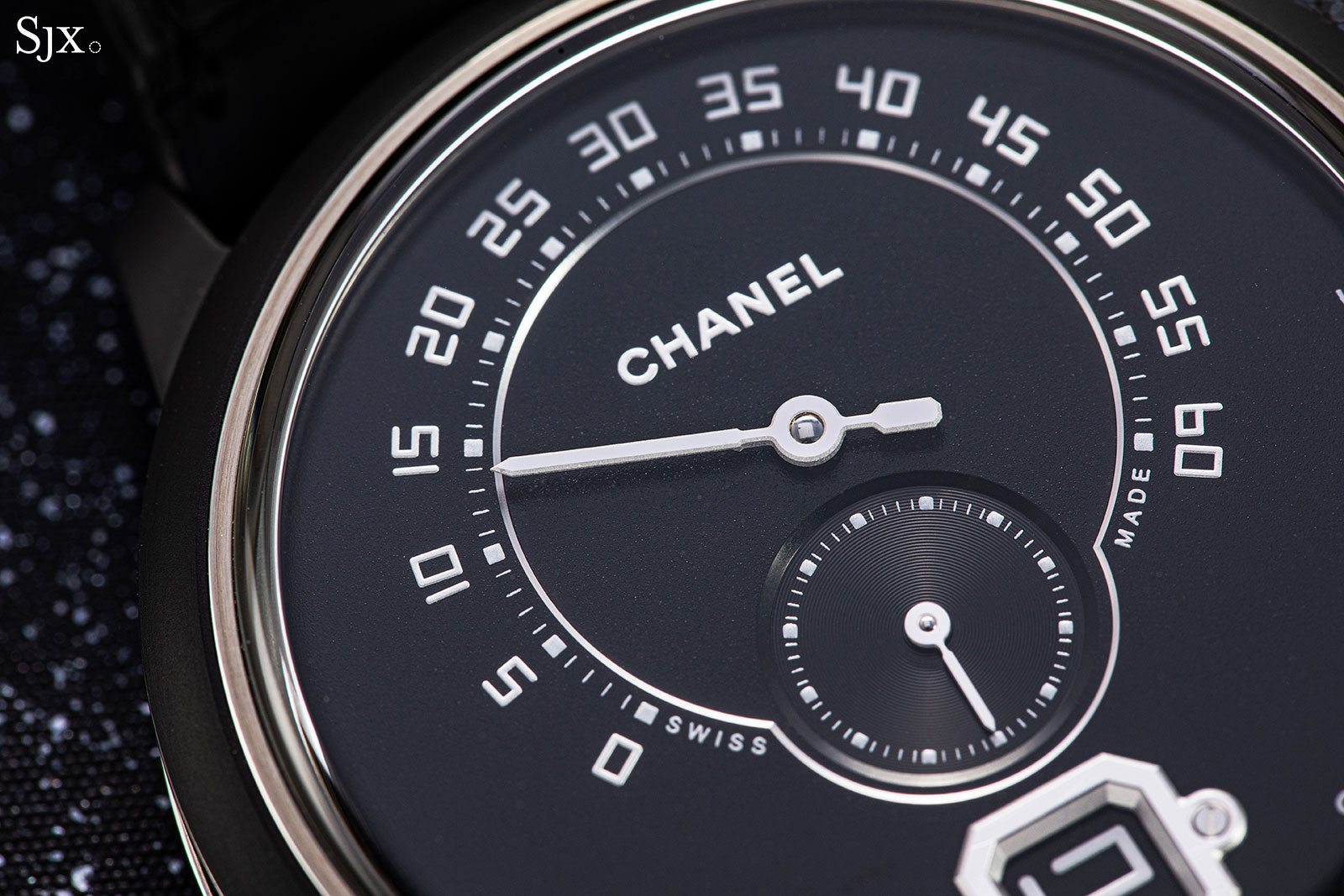 While the dial is visually appealing, reading the minutes takes a bit of getting used to. Oftentimes a double take is needed to read the minutes exactly.

Though the dial is stark, it is smartly detailed. The custom font used for both the hours and minutes echos the Chanel logo, creating a sense of uniformity on the dial. At the same time, the hands and frame for the jump hour have an alternating frosted and polished finish that gives them nuance. 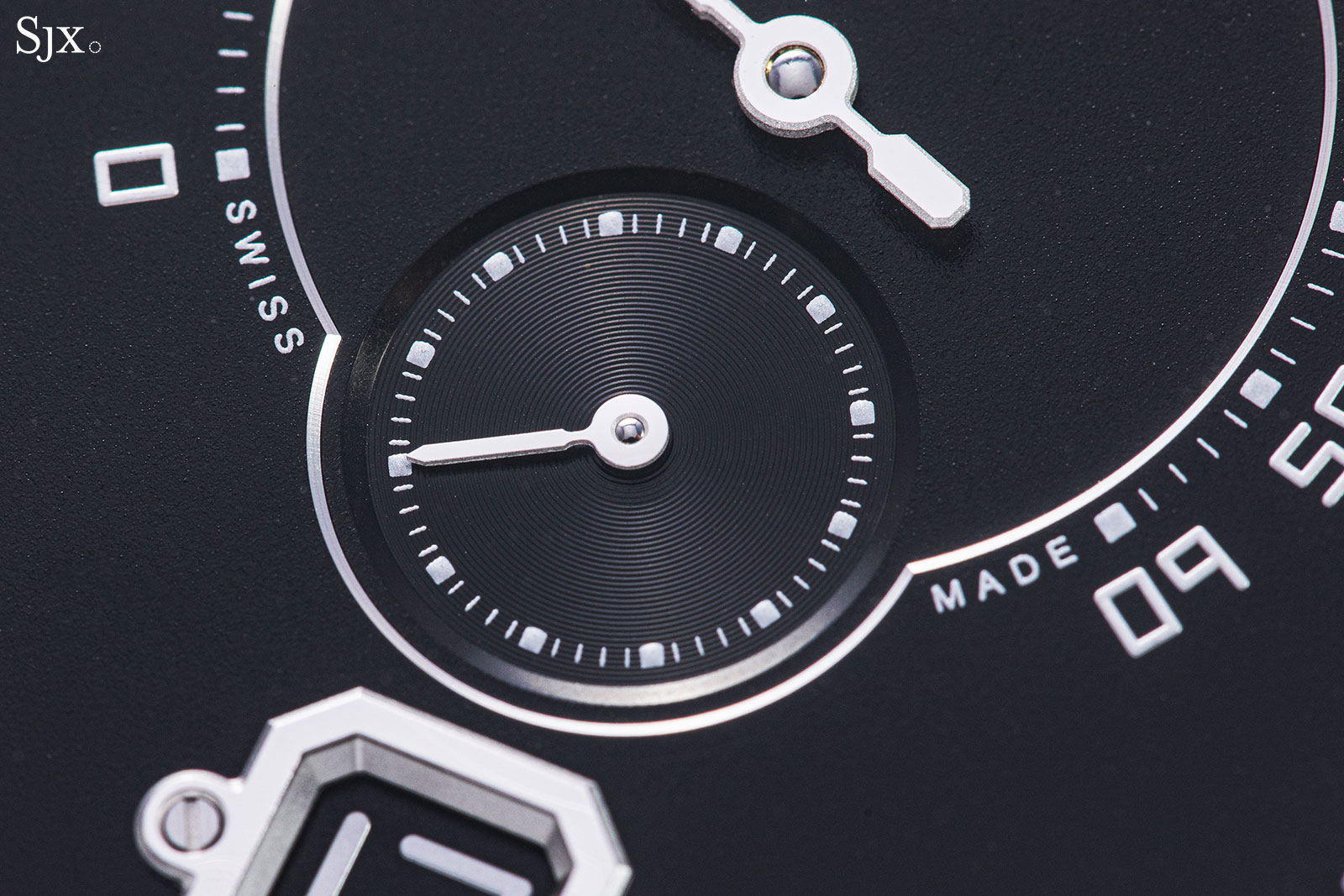 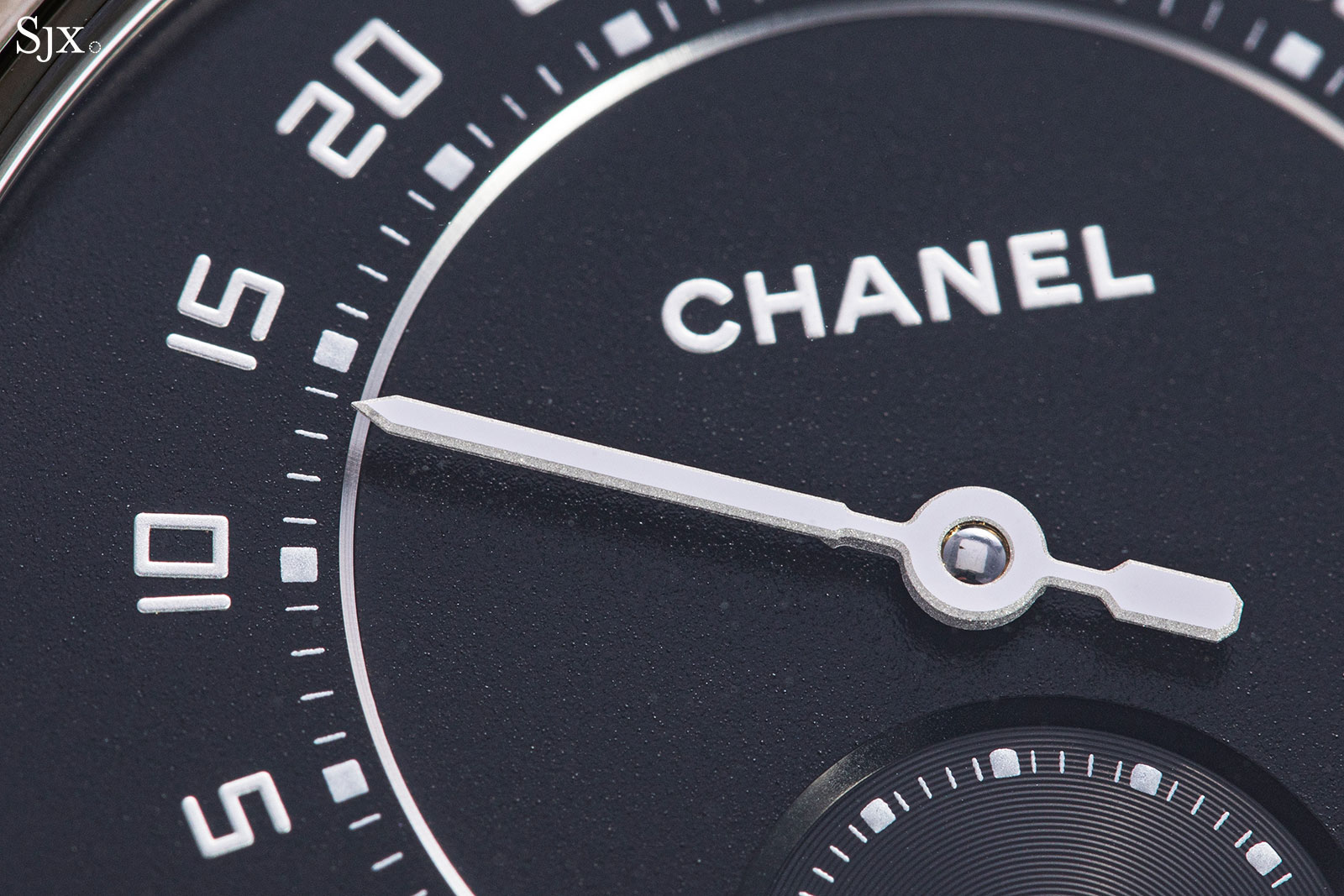 The hands have a polished top surface and frosted, bevelled edges 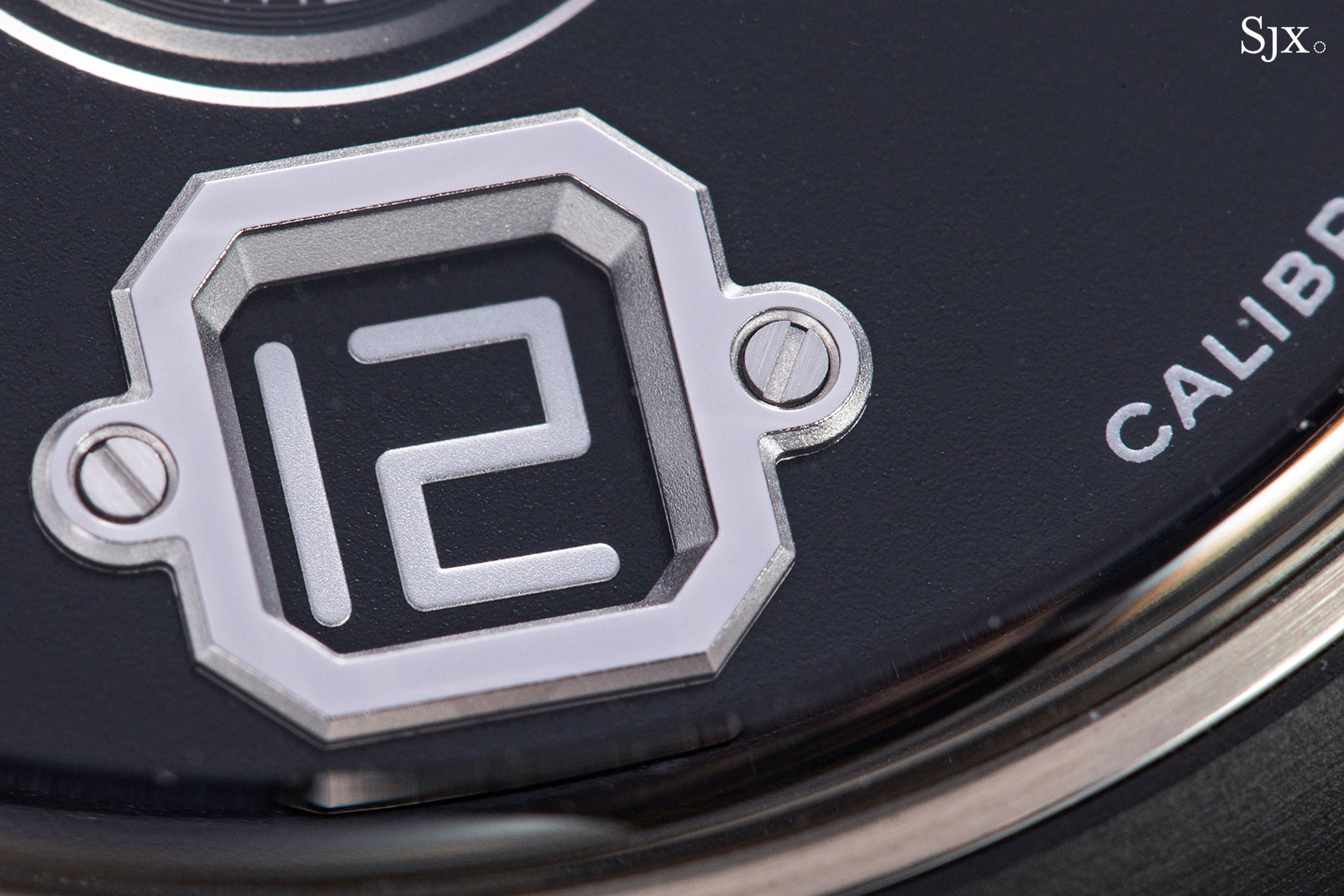 Ditto for the frame around the hour display

Behind all that is the Calibre 1, developed in-house by Chanel – it was, in fact, the first in-house mechanical movement developed by Chanel. An eight-person team at Chanel Horlogerie, located within the G&F Chatelain complex in La Chaux-de-Fonds, was responsible for constructing the movement, although Mr Gauthier helped with the styling of the elegantly circular bridges.

At the launch of the Monsieur in 2016, Nicolas Beau, the chief of Chanel’s watch division, emphasised during our conversation that it was crucial for Chanel developed its own movements in order to lay the foundations for a business in high-end watches, particularly those for men. The Calibre 1 is a strong start. 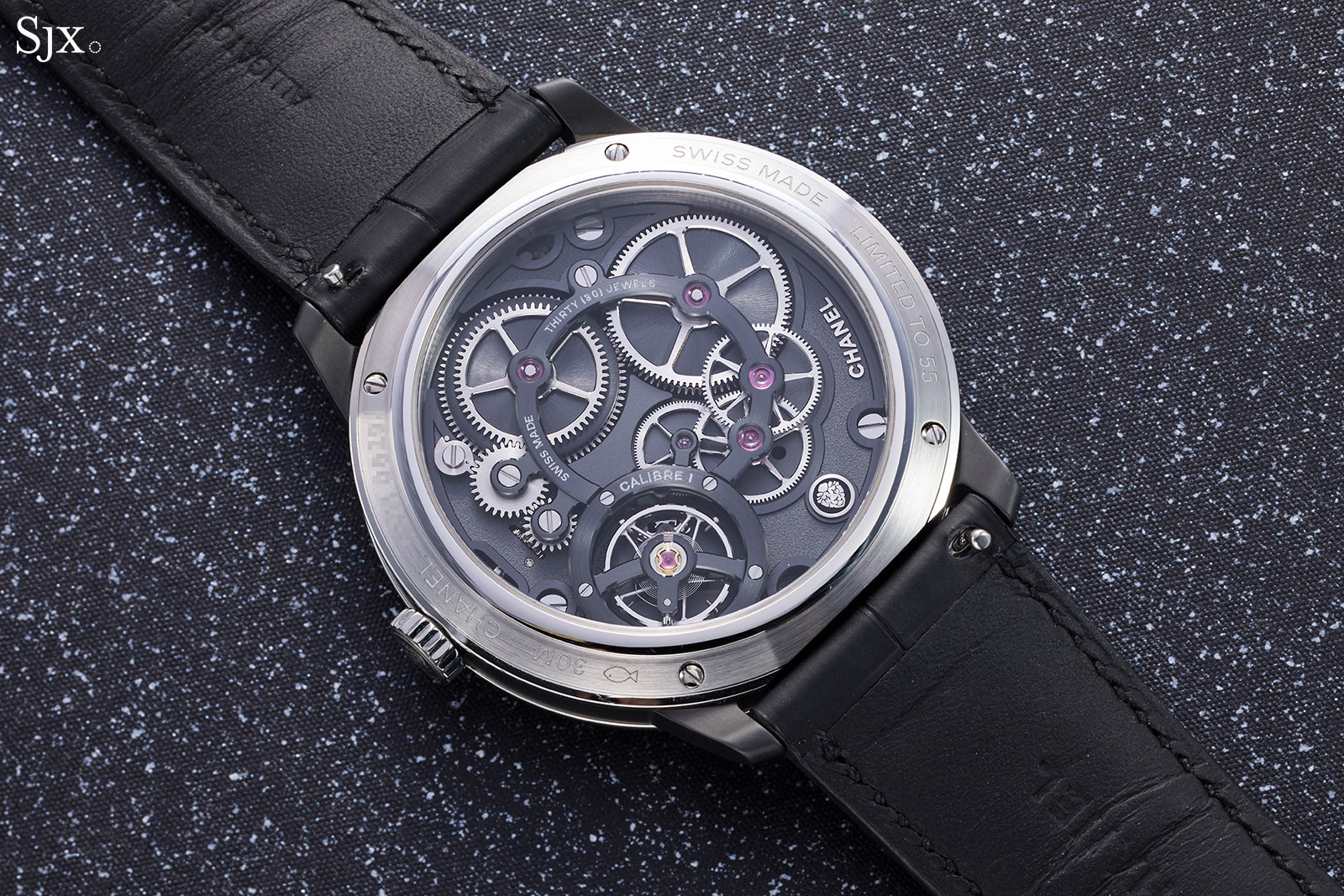 Despite being functionally straightforward – indicating just hours, minutes and seconds – the Calibre 1 is a interesting in construction and design.

To start with, it is equipped with the basics of a sophisticated movement. It has double barrel, resulting in a three-day power reserve, as well as a free-sprung, adjustable mass balance. But the Calibre is also looks good, which is a rare feat. 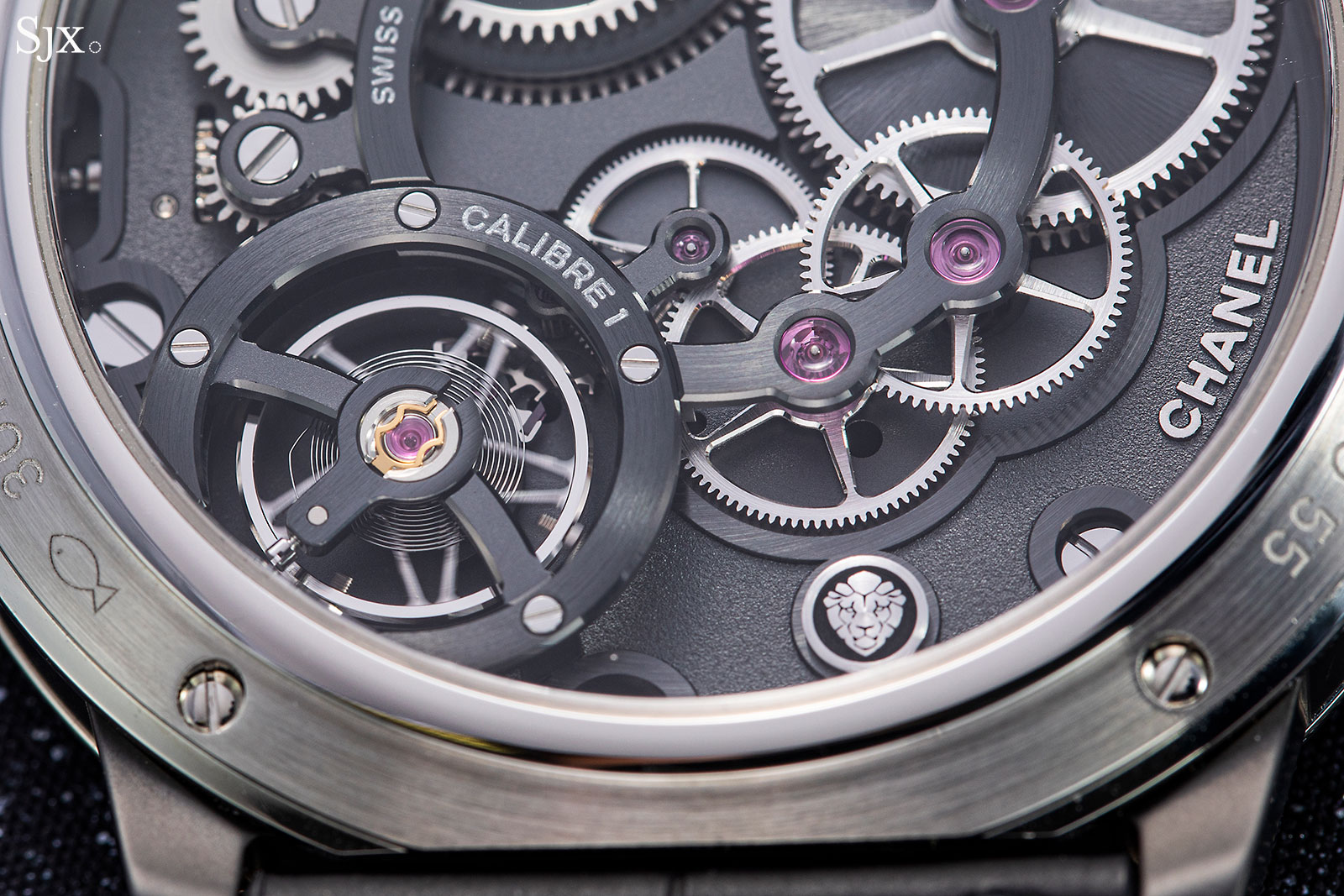 The Calibre 1 has been designed to both look good and possesses Chanel’s house style, and it shows.

Like all other in-house Chanel movements, the Calibre 1 is all about repeating circular forms, with the wheels and balance secured by circular bridges. The later Calibre 3 repeats the same aesthetic, but in a skeletonised, rectangular form movement.

Various Chanel design elements are also incorporated into the movement, most notably with the star-shaped balance wheel. And naturally the colour palette of the Calibre 1 is typical Chanel in style – dressed in monochromatic black and silver. 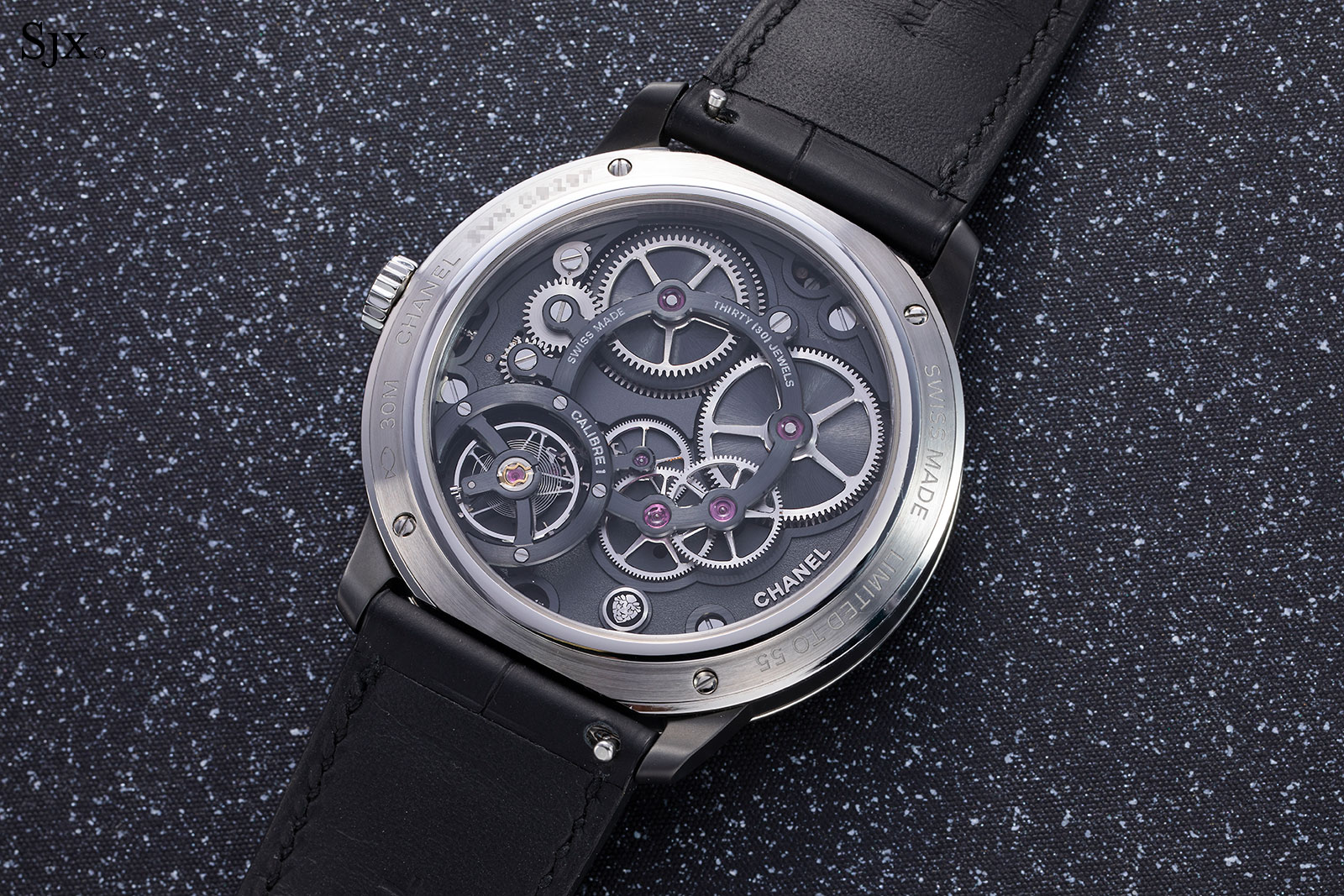 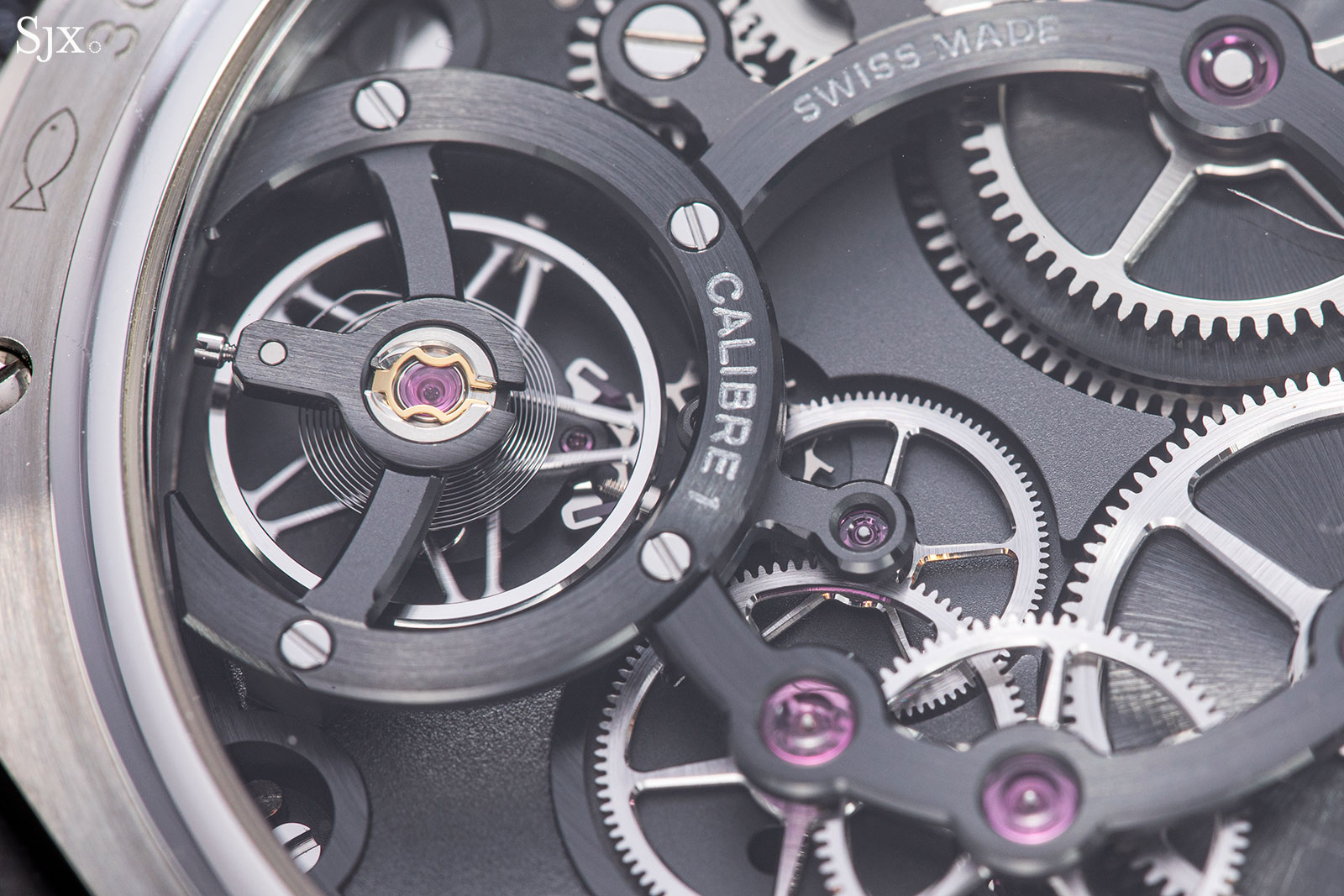 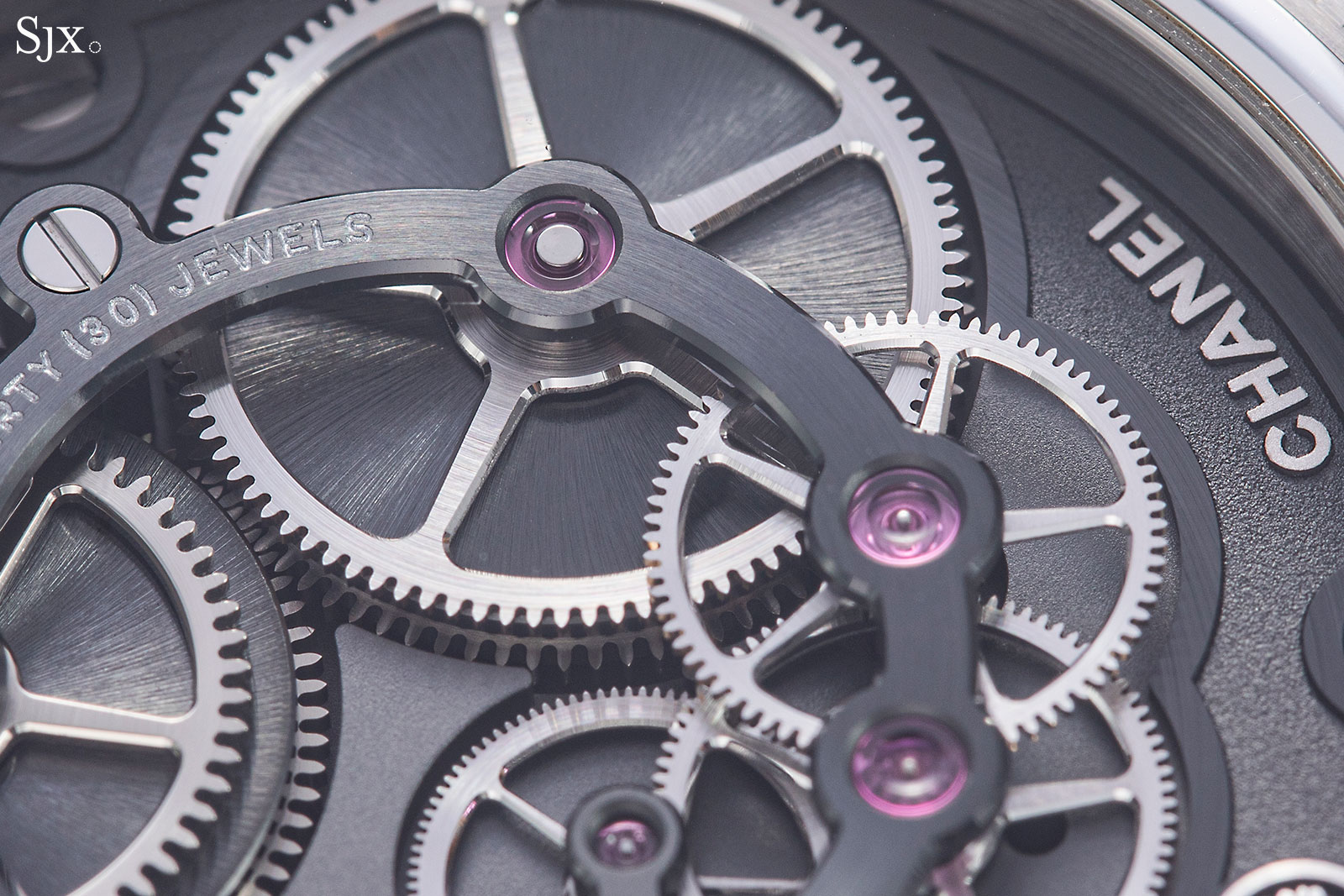 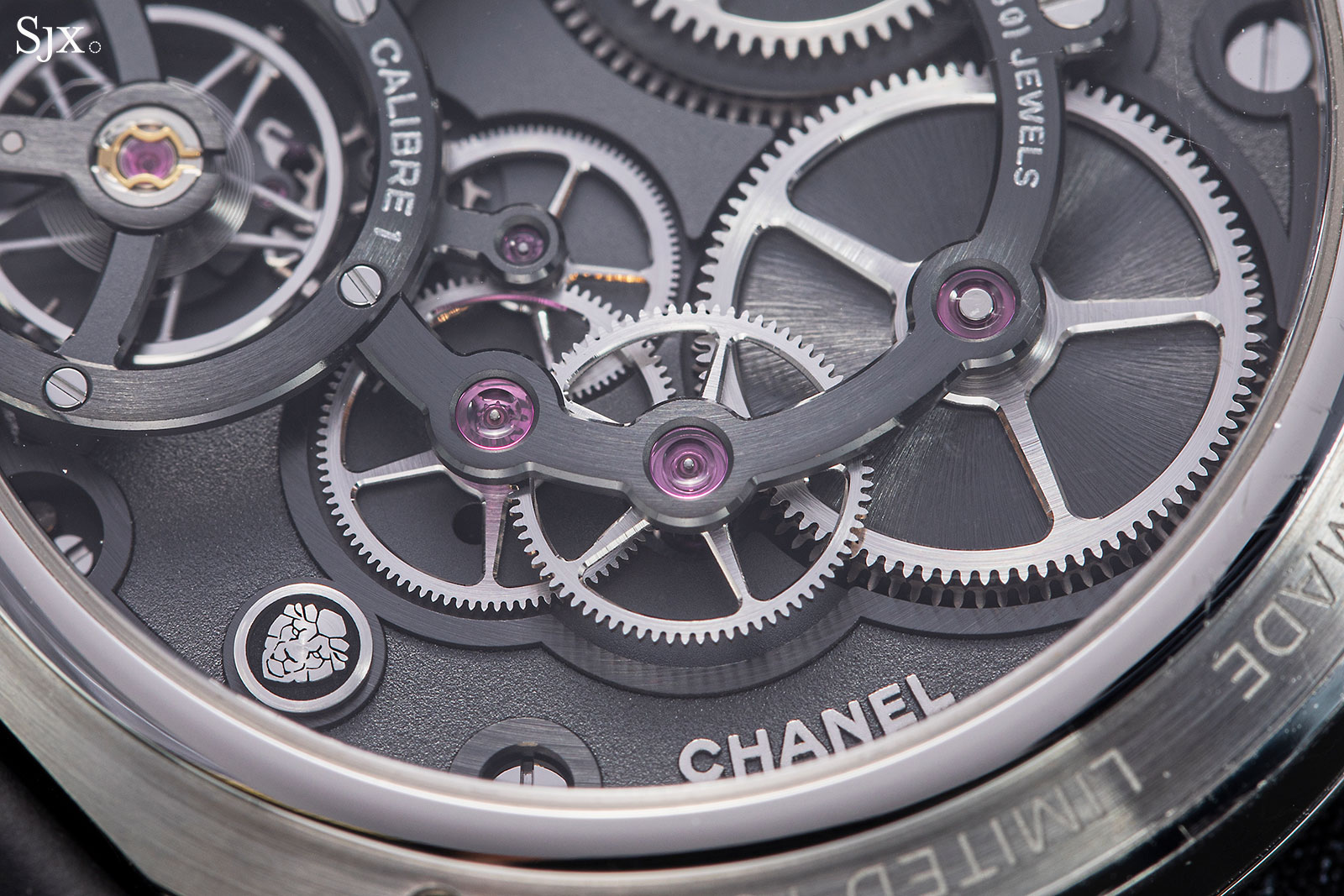 But the finishing is done by machine, resulting in clean, sharp edges. The bevels, for instance, are cut with a diamond-tipped tool using a CNC machine. 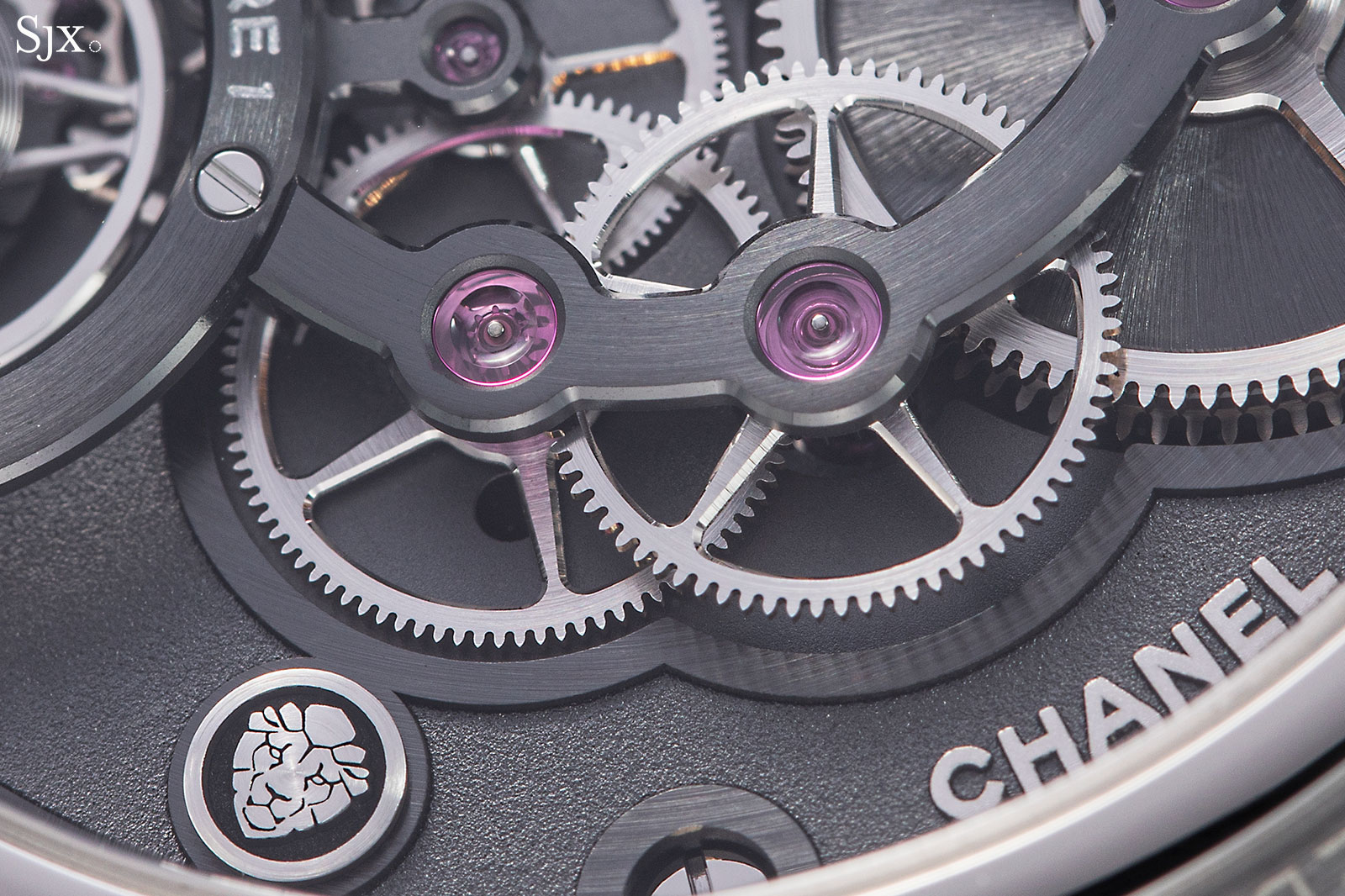 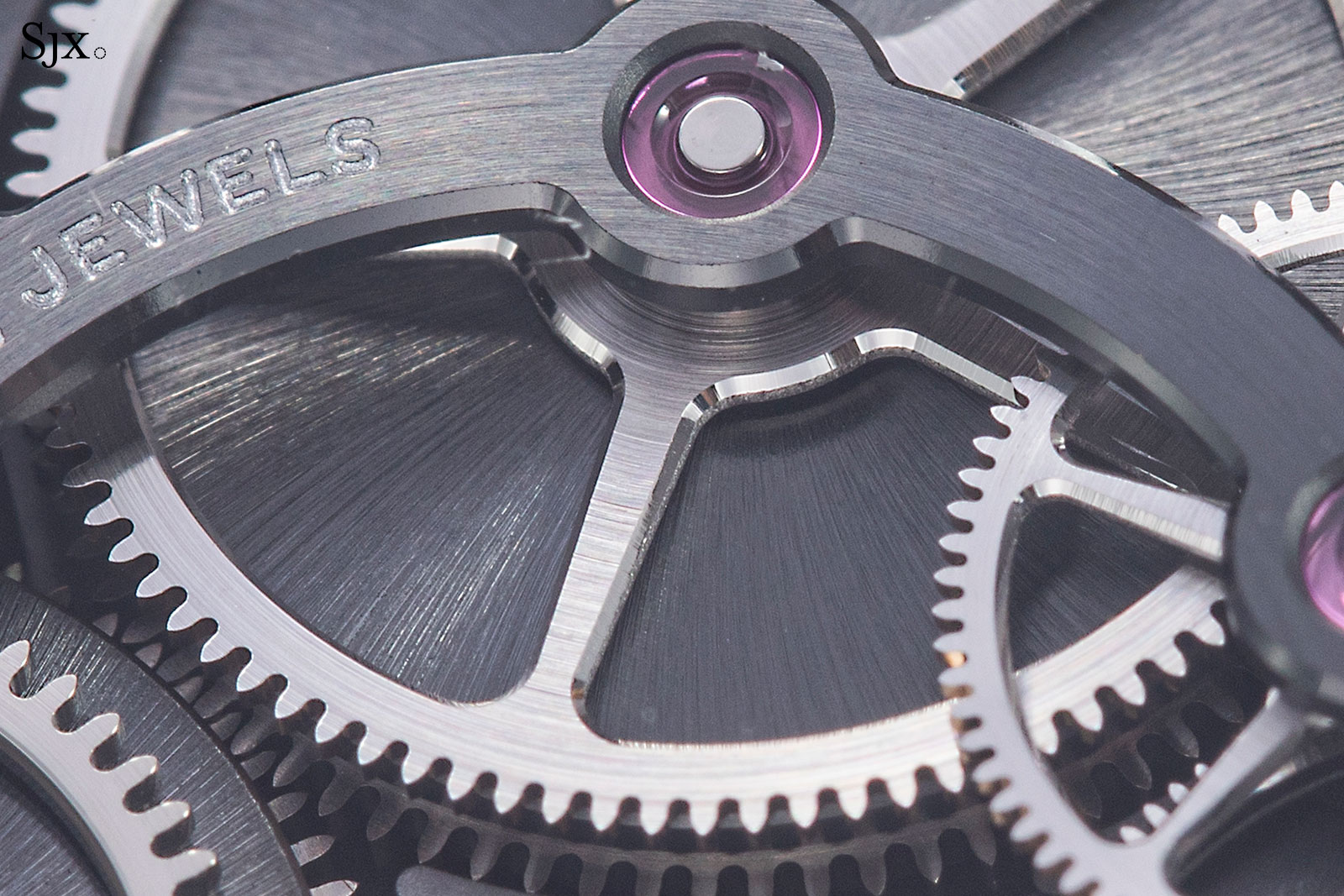 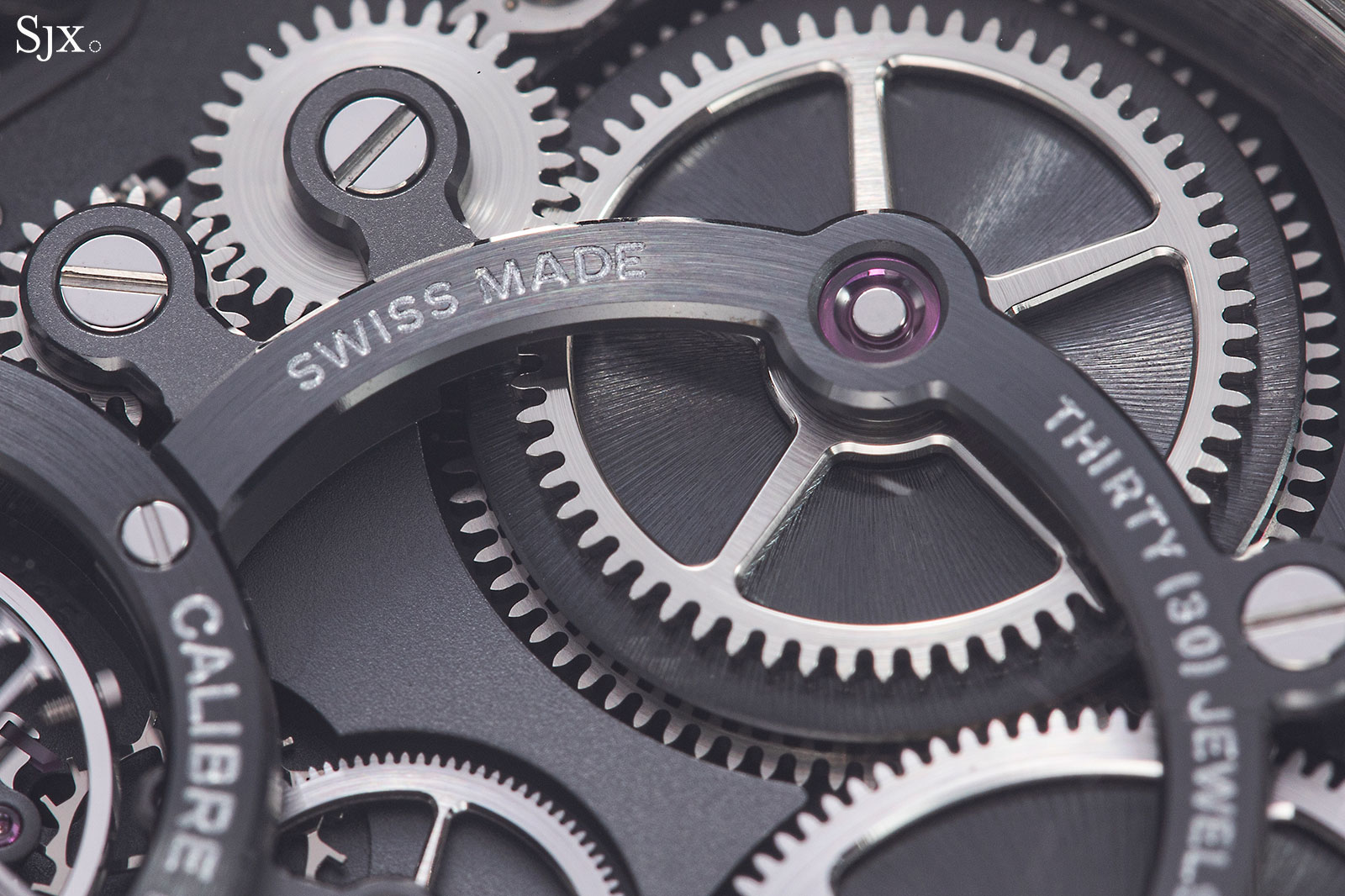 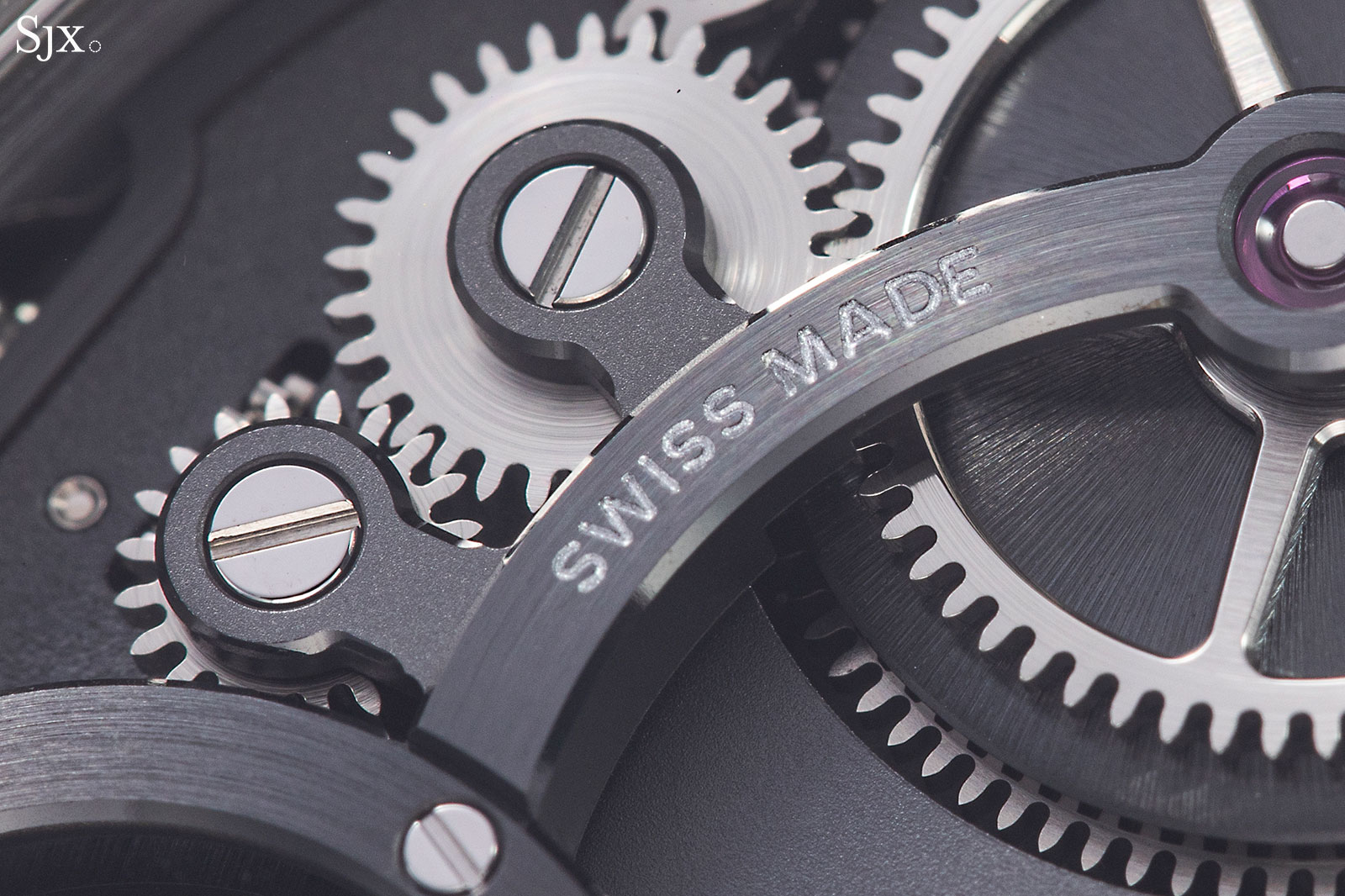 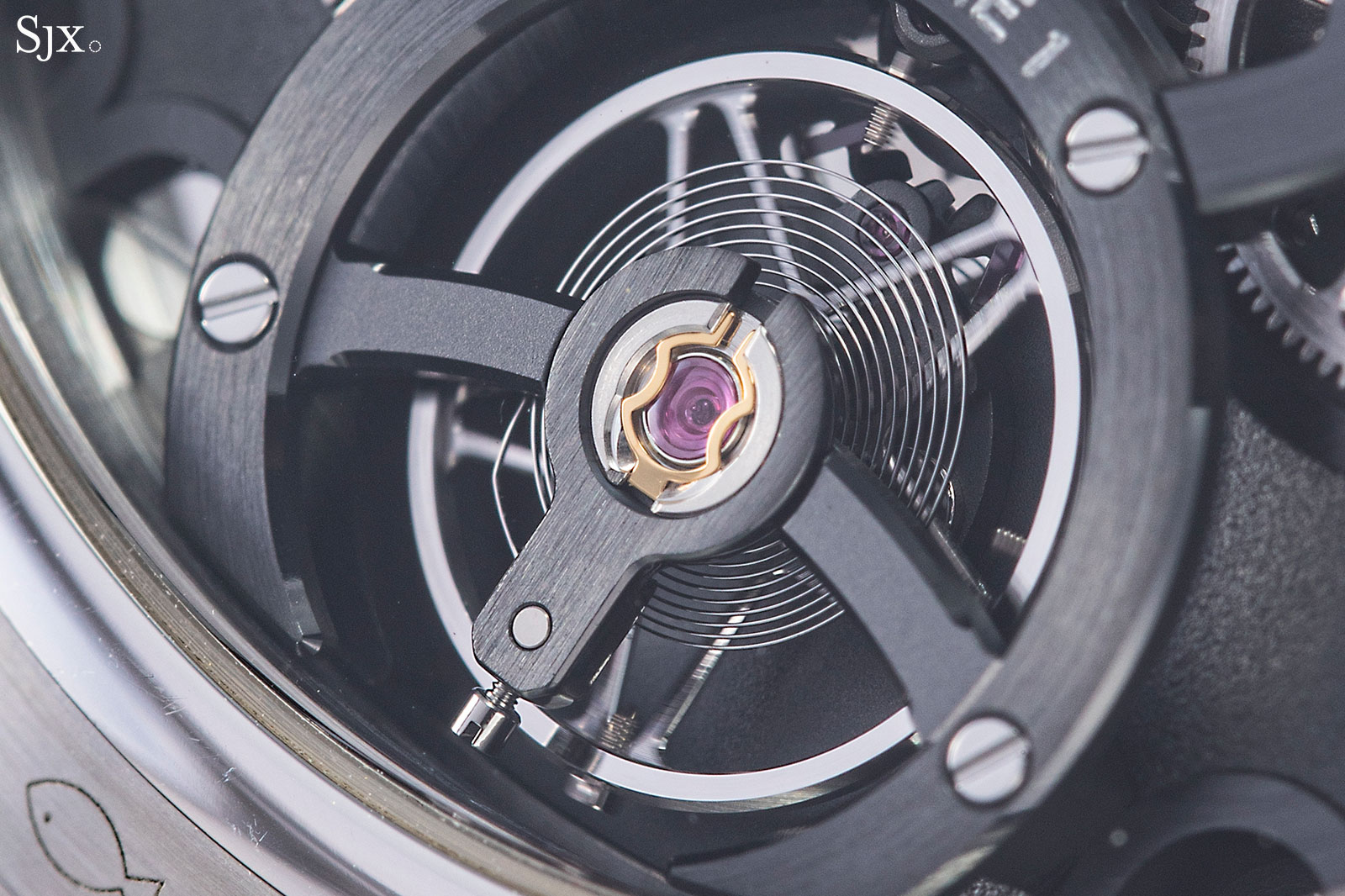 The Monsieur Édition Noire is a well-designed watch that is exceptionally handsome; the look just works. And that’s not just the dial, but also the styling of the movement, which is rare since watchmakers often neglect the aesthetics of the mechanics.

In terms of value, the Édition Noire isn’t an obvious value buy at US$27,500, but it isn’t exorbitantly priced either. It’s compelling enough to be worth considering.

The mechanical men's watch gets a handsome black enamel dial - and a much steeper price tag.