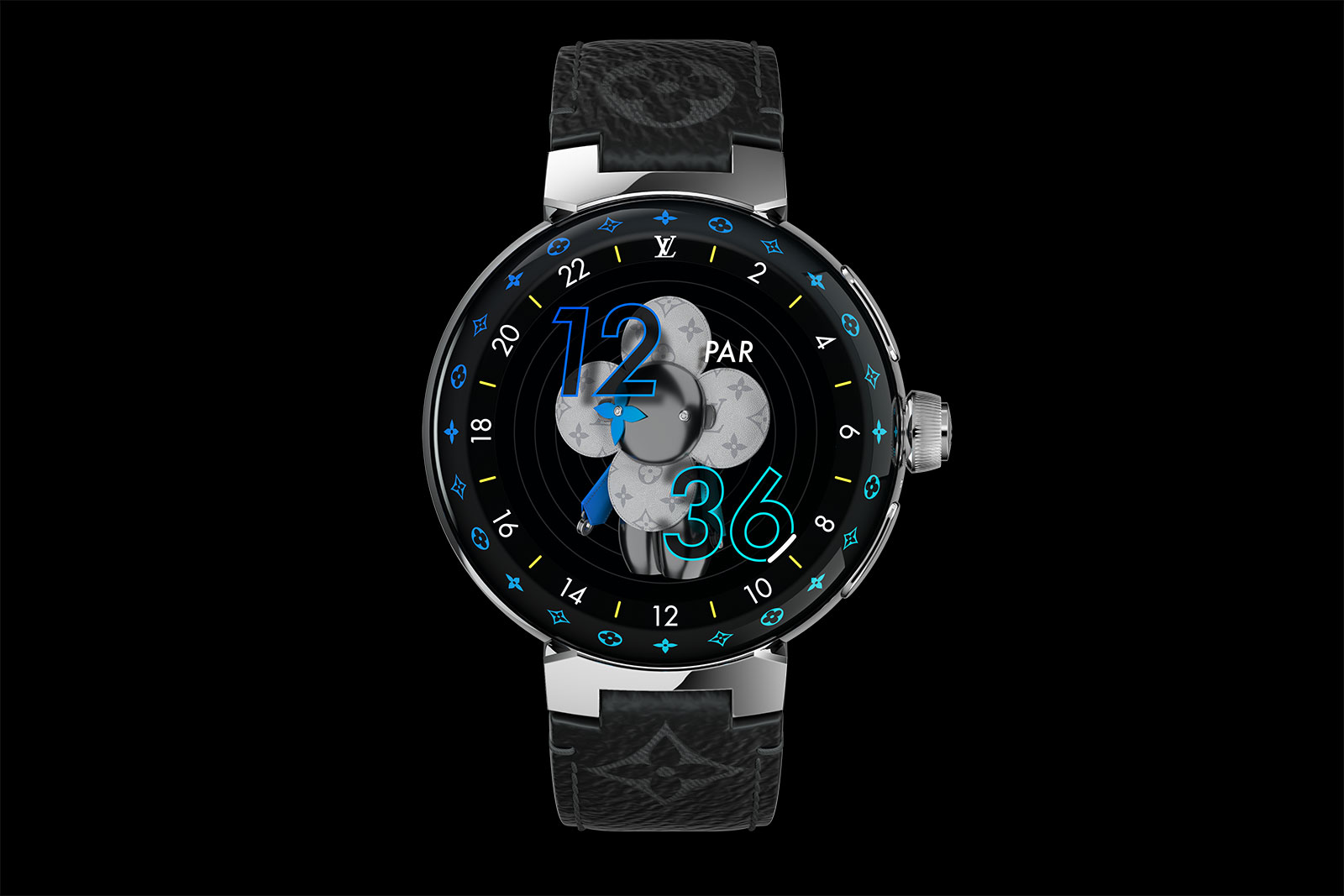 Now in its fifth year of smartwatches, Louis Vuitton has just unveiled the latest generation of its “connected” watch, the Tambour Horizon Light Up.

Still easily recognisable as a Louis Vuitton watch, and looking more like a watch than a device – that is the point of it – the Light Up is a thoughtful evolution of the concept, bringing with it a rounded, edge-to-edge screen and redesigned case. The result is a surprisingly attractive watch, albeit one that is amongst the priciest smartwatches on the market. 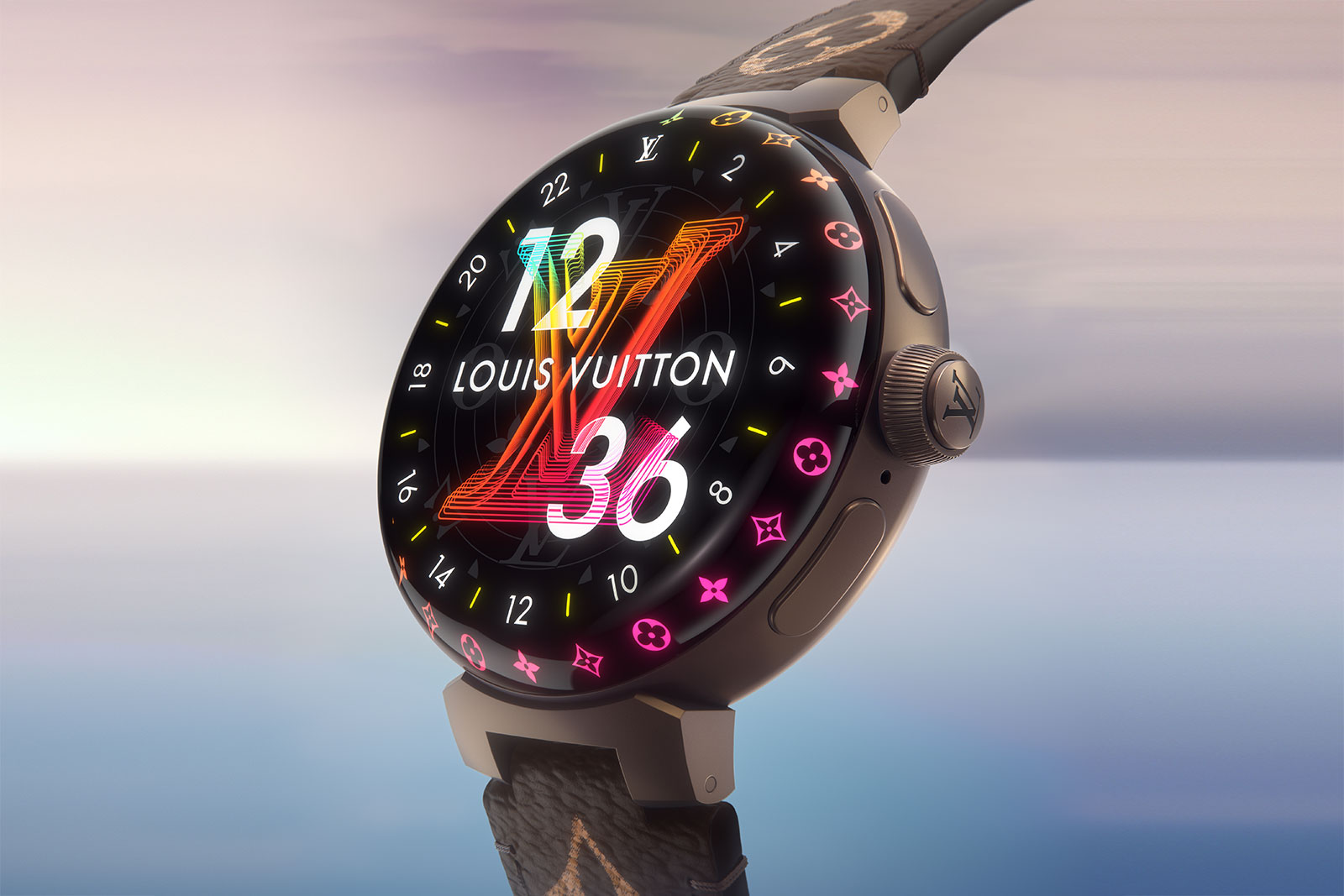 Smartwatches with screens generally fall into two categories. One comes from the likes of Apple and Samsung, gadgets for the wrist that are evidently electronic devices. And the other are those from traditional watchmakers, ranging from TAG Heuer to Montblanc, which are typically resemble large wrist instruments for sports. With its simple case and discreet buttons, the Light Up clearly just wants to be a watch – and it succeeds.

It is a (very) luxe smartwatch, so it’s not for everyone, but there’s no denying that the Light Up is appealing as a watch with intelligent features. With its Ressence-like case and whimsical features, the watch avoids the oversized wrist gadget look, and perfectly encapsulates the brand’s design prowess and house style. 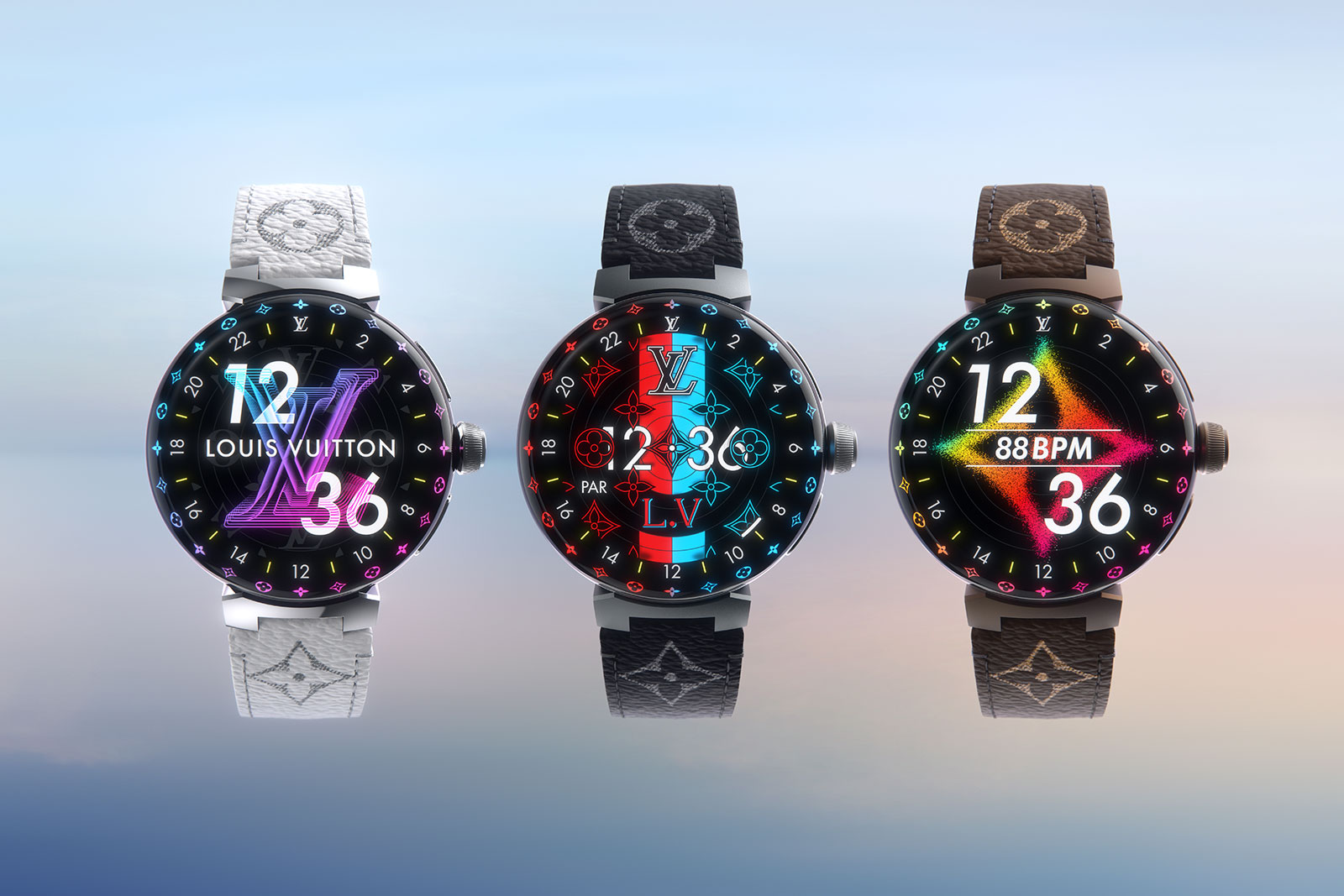 And the Light Up is, of course, more expensive than the typical smartwatch, which is a moot point because it was clearly conceived as a luxury timepiece first and an electronic device second. From that perspective, the Light Up excels, especially in terms of its distinctive styling that is more watch and less gadget. But because it is a gadget, it comes with the experience of seeing the rainbow LEDs do their thing – which drains the battery but is worth it.

That said, the available faces for the Light Up are all digital. A face with hands would be useful, especially given the design of the watch.

The biggest improvement of the Light Up over the previous generation smartwatch is the redesigned case and crystal. Unlike the earlier version had a flat screen (and the concave Tambour Moon case), the Light Up has a curved crystal that flows almost seamlessly into the case, which instantly brings to mind the liquid-filled time case of Ressence – the irony there is that the signature Ressence wristwatch is mechanical but resembles a smartwatch.

And the case middle of the Light Up returns to the original Tambour case that was launched in 2002, the year Louis Vuitton started making watches. French for drum, the Tambour was defined by its broad sloped flanks, which give the Light Up a pebble-like feel. 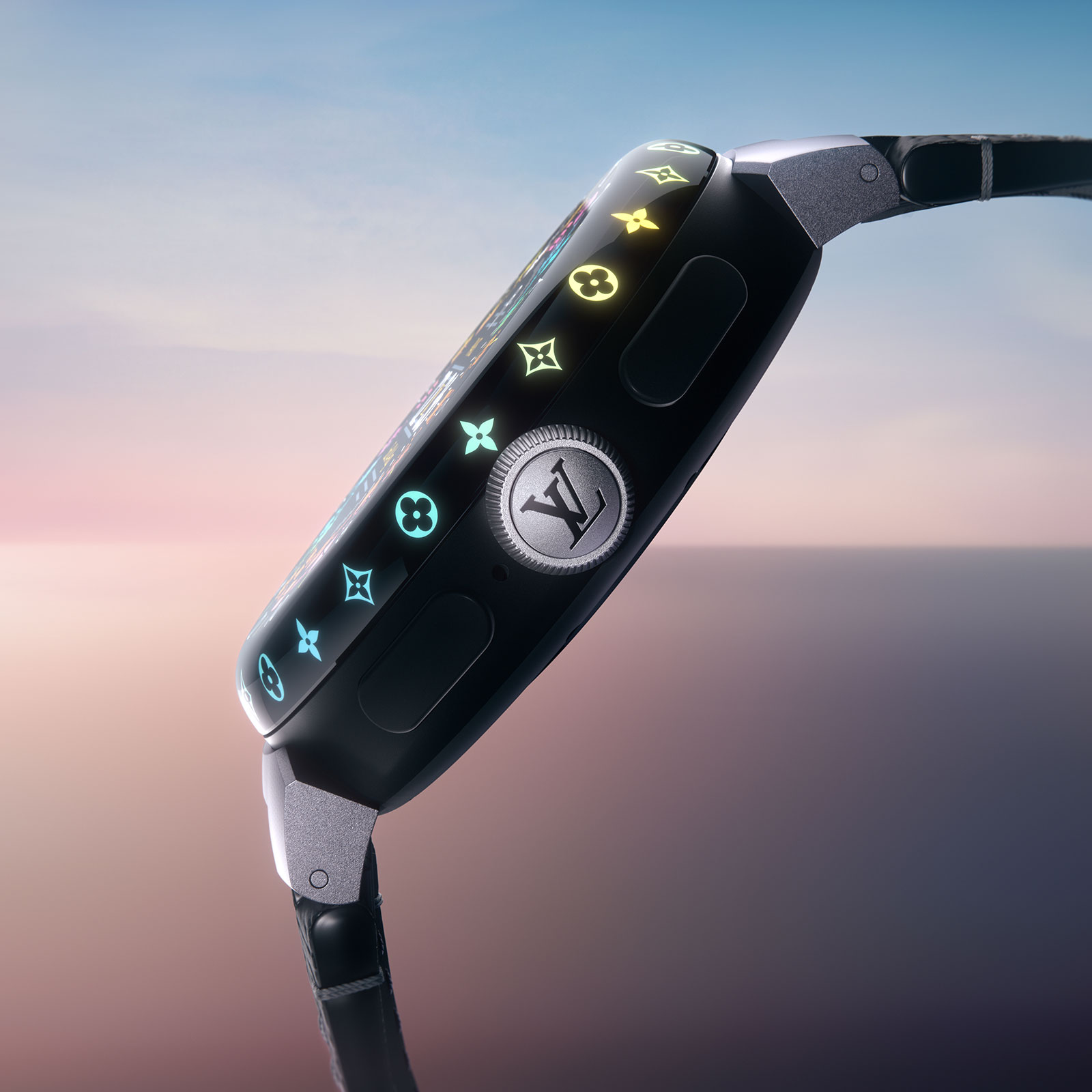 The bears an engraved LV logo filled in black lacquer

Function-wise the Light Up remains similar to its predecessor. So it’s compatible with Android, iOS and HarmonyOS, with smartphone apps available for each operating system.

It has all of the key functions expected of a smartwatch, including the heart rate monitor that was absent in previous generations of the watch. And it boasts several extras unique to Louis Vuitton, such as the “My Travel” app that tracks the logistics of a trip, as well as “City Guides”, a compendium of guidebooks for key cities.

And because it’s a Louis Vuitton smart, a series of whimsical dials are available, including seasonal specials like an animated tiger for the Chinese Lunar New Year. And the faces are complemented by a selection of watch bands, including the signature LV Monogram, leather, and rubber, all of which feature the brand’s propriety quick-release mechanism. 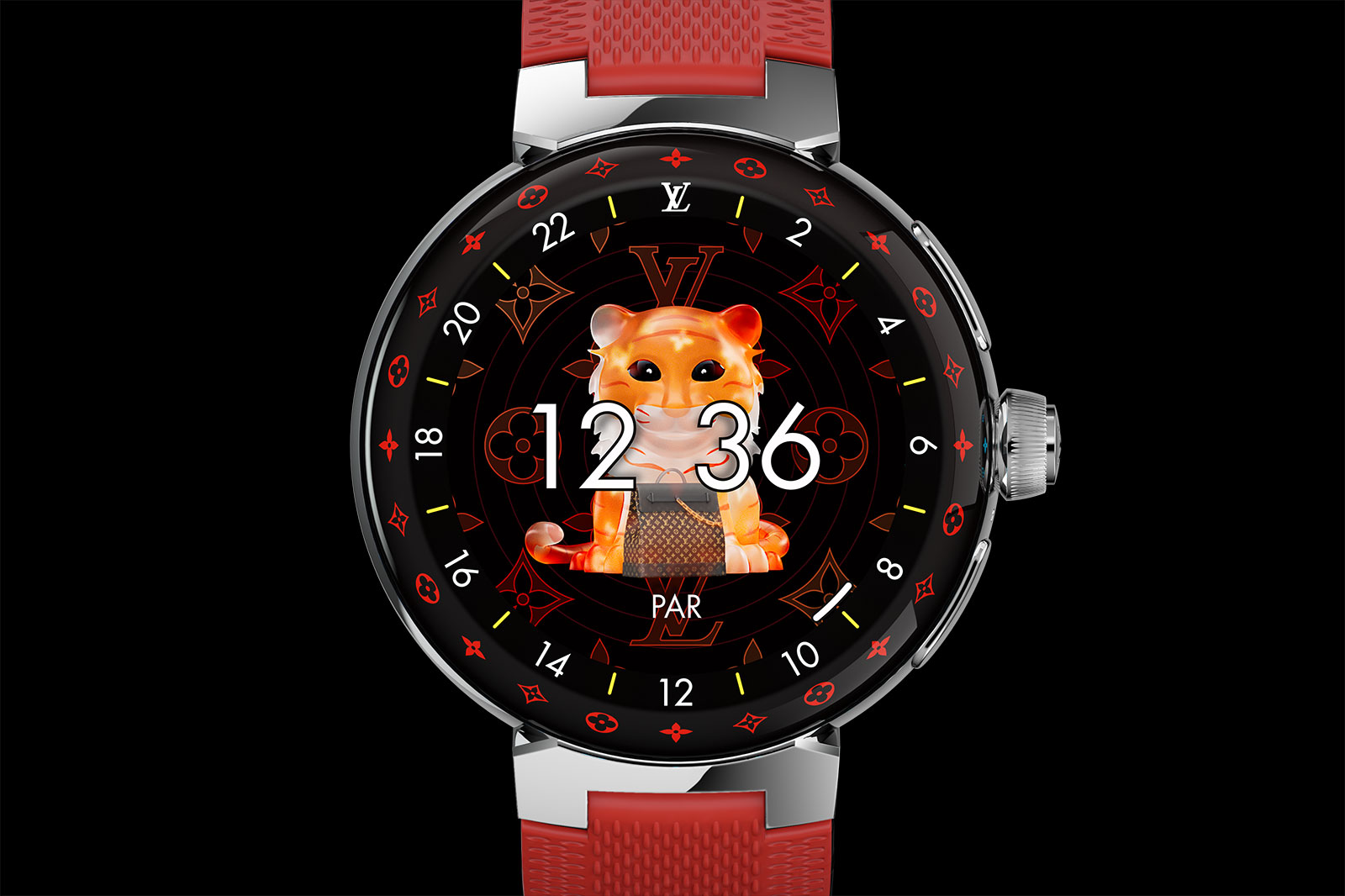 Just in time for the Lunar New Year, with 2022 being the Year of Tiger in the Chinese Zodiac