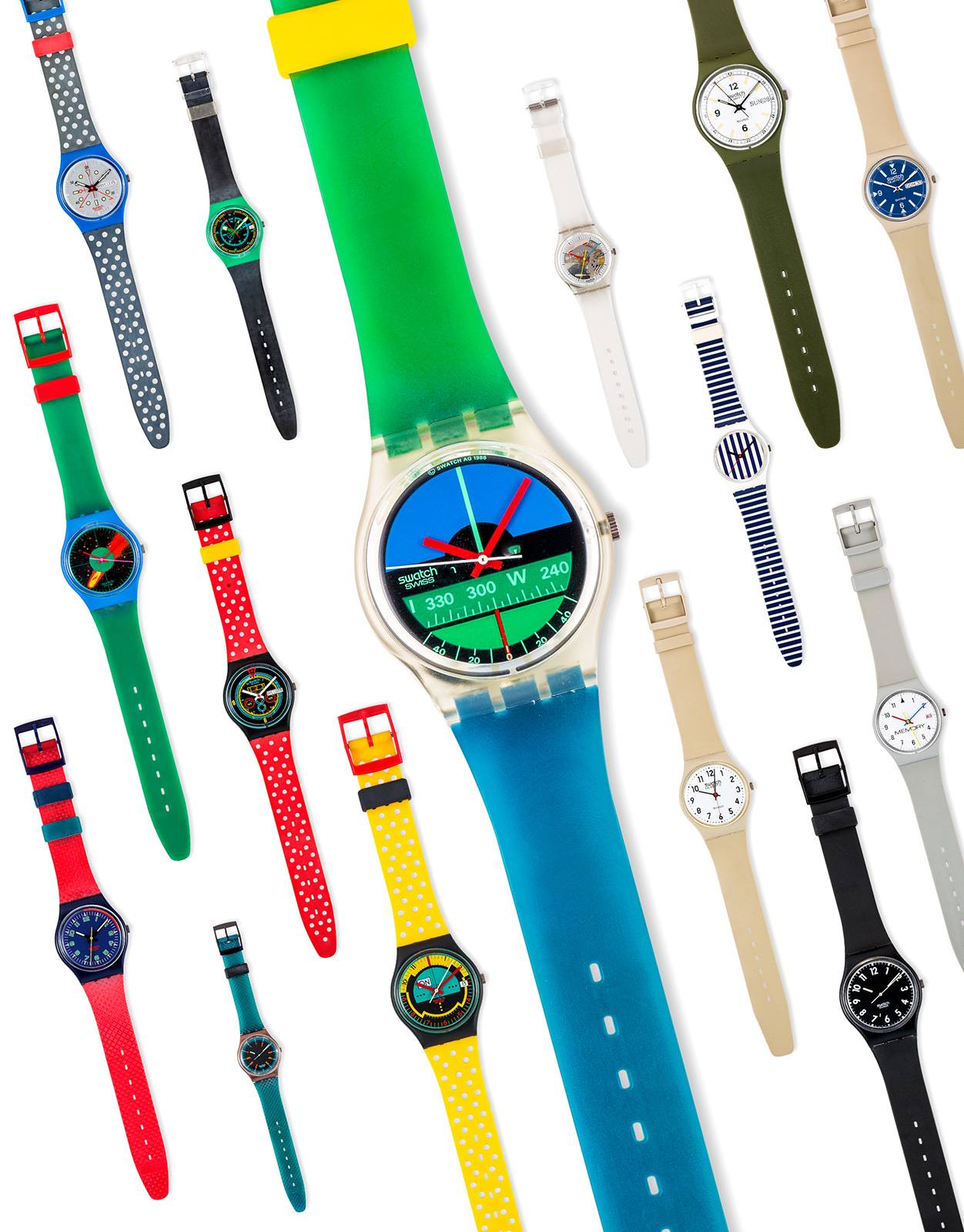 The extraordinary Dunkel Collection Swatch watches has just sold for 46.48 million Hong Kong dollars, or just over US$6 million. With over 5800 timepieces in the collection, it sold for about US$1000 per watch. Sotheby’s in Hong Kong has just sold the Dunkel Collection of Swatch watches for HK$46.48 million, including the buyer’s premium, or more than four times the estimate of HK$10 million. The buyer was a “European institution” according to the auction house.  Comprising some 5800 watches collected over nearly 25 years by European collector Paul Dunkel, the collection is the largest Swatch collection ever sold, surpassing the lot sold by Phillips for HK$51 million in 2011 that was made up of 4363 watches. The Dunkel Collection was made up of 5630 standard Swatch watches, 45 prototypes and 19 Maxi Swatch, plus artwork related to the watches. Not just a watch collection, it was time capsule of popular culture stretching from the eighties till the mid-2000s, given how incredibly popular Swatch once was. 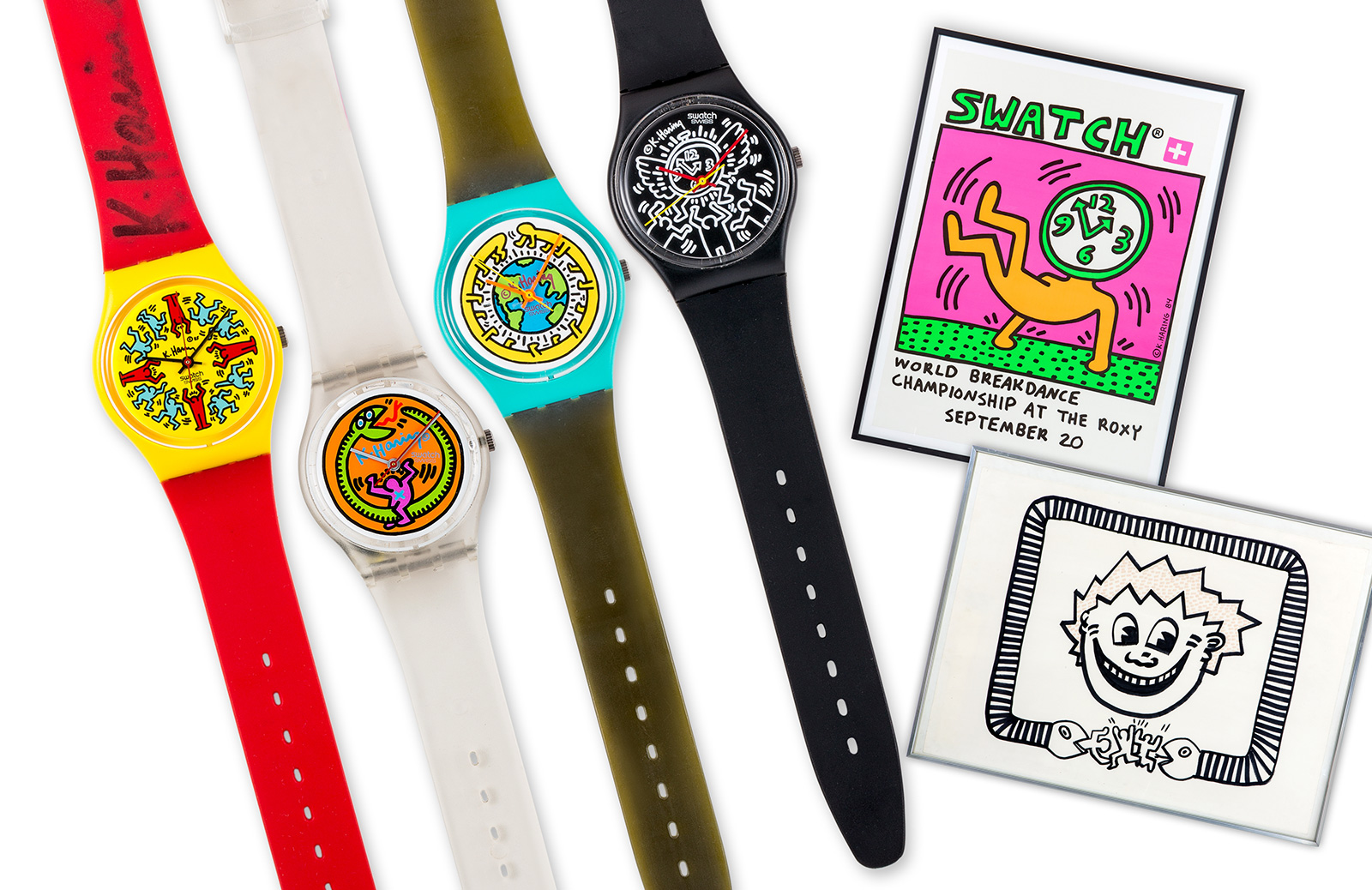 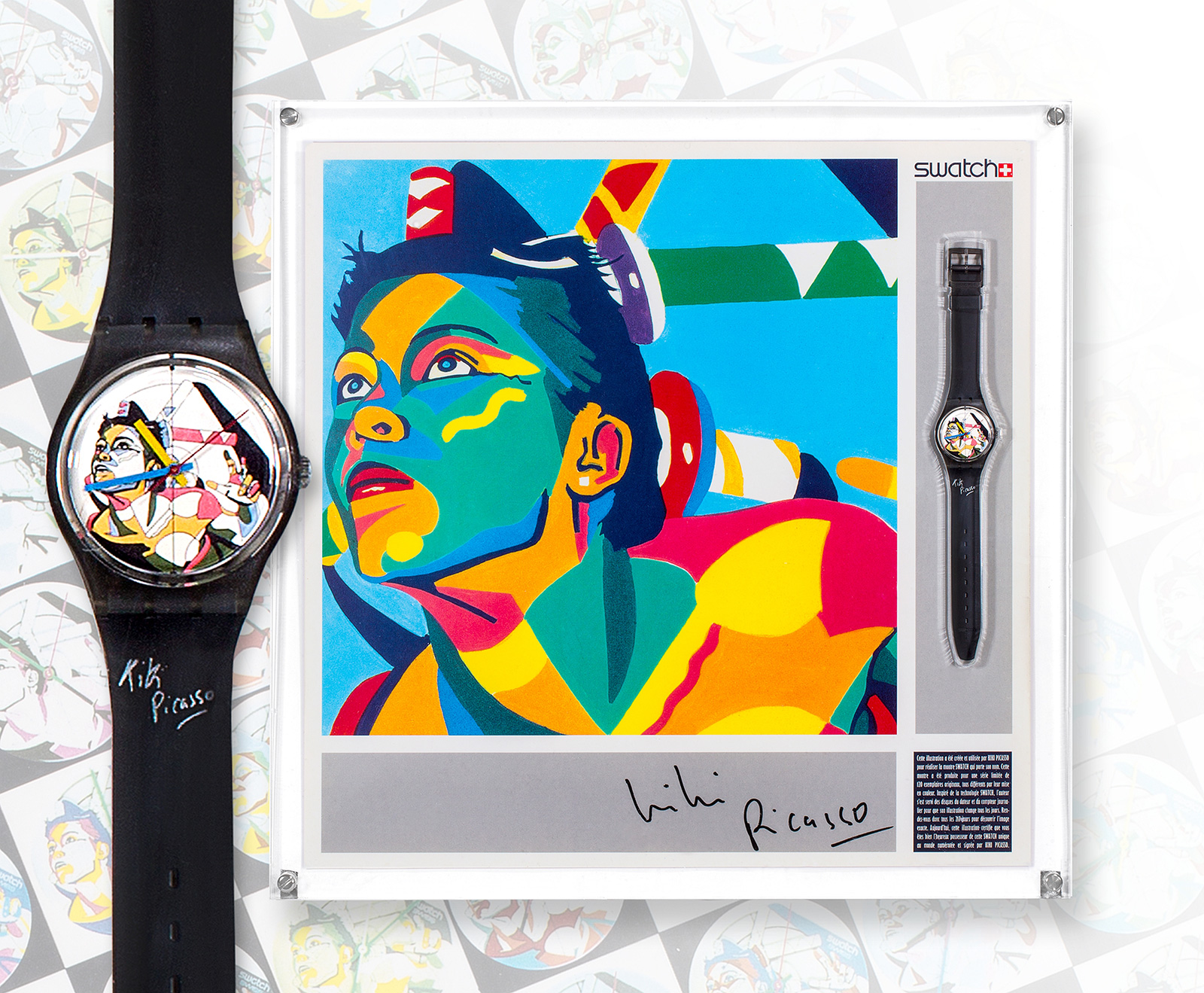 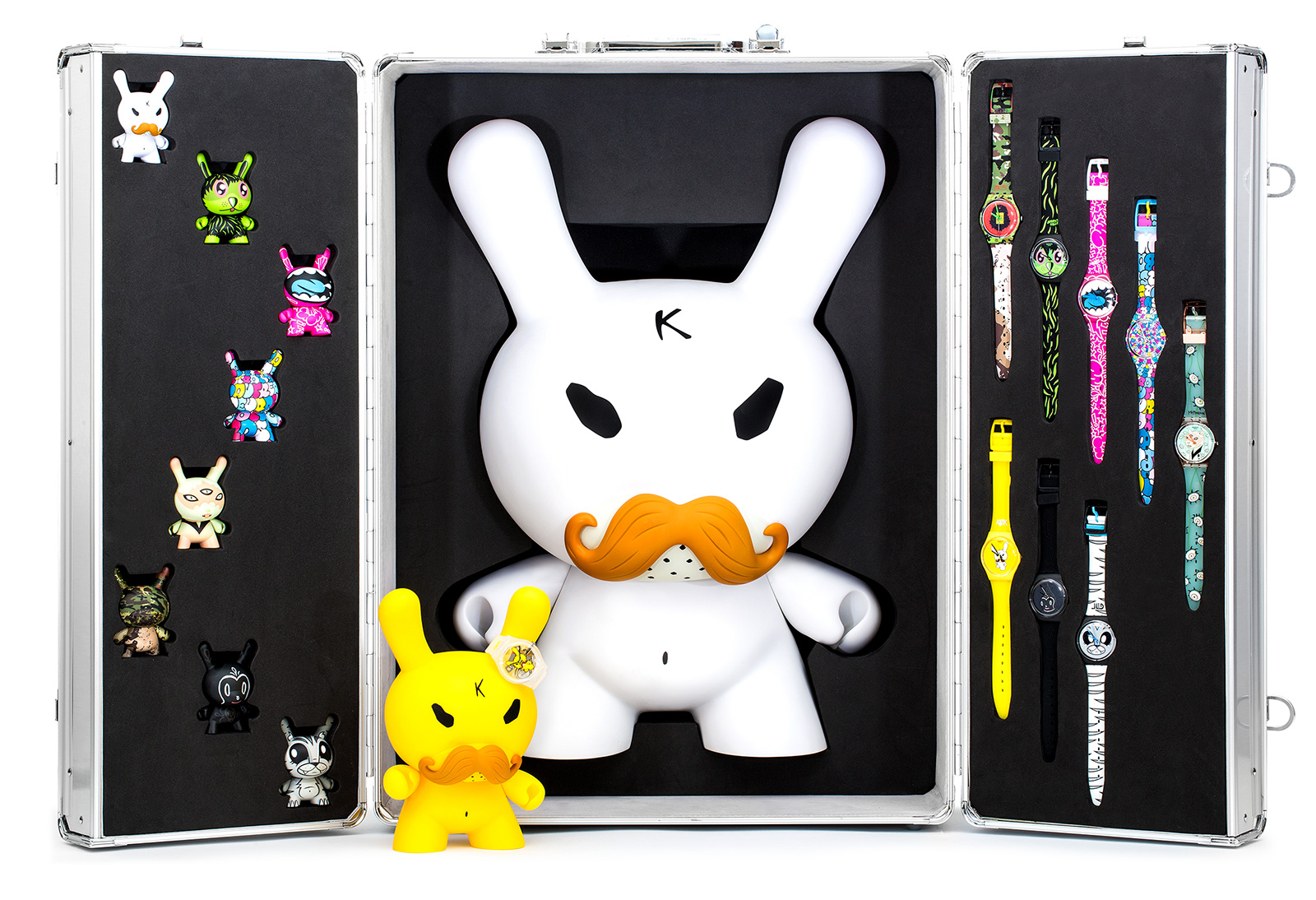 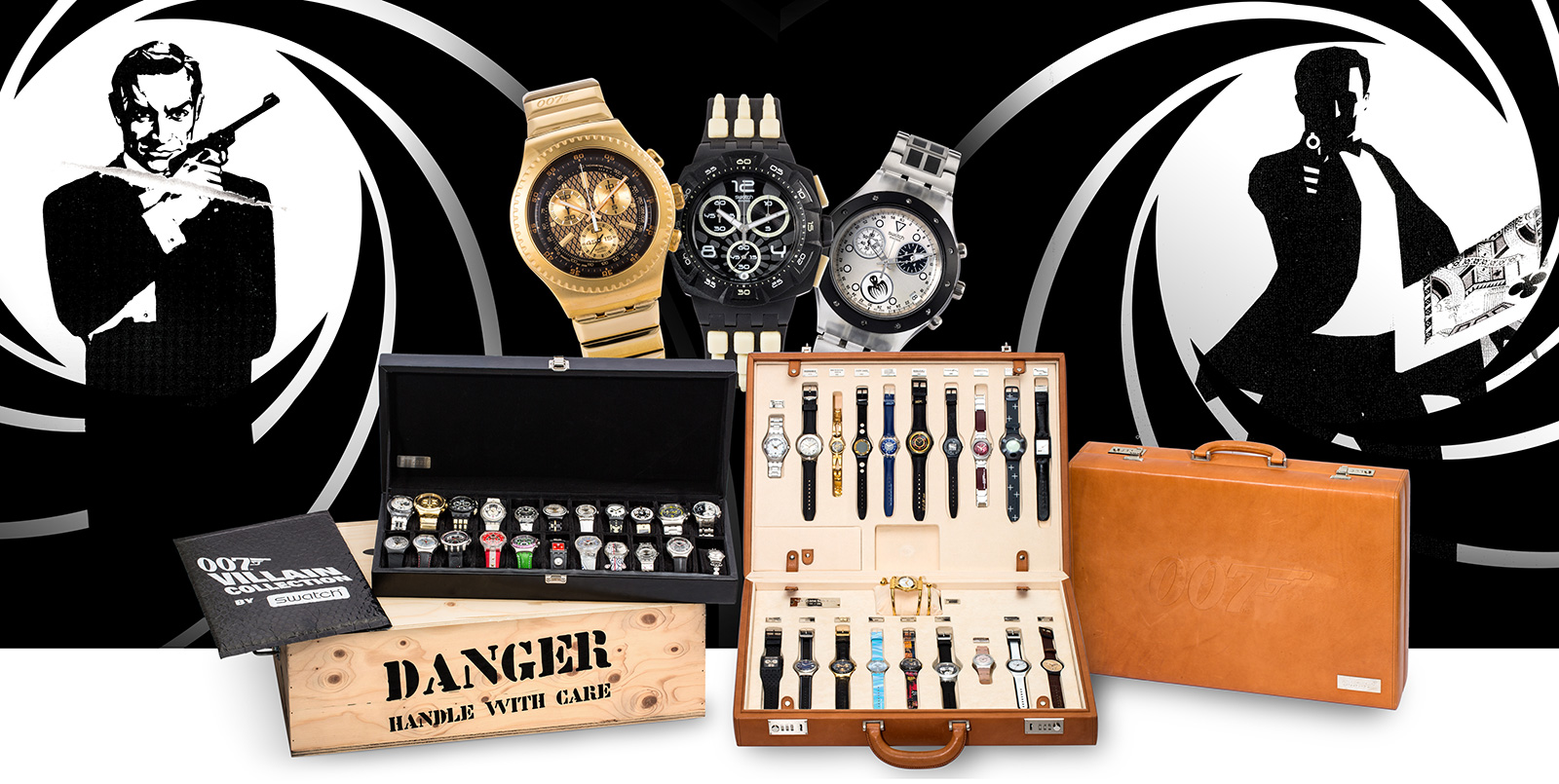 With the hammer price equivalent to US$6.02 million, the collection sold for about US$1038 per watch, a reasonable price to pay for a museum or other institution that needs a collection of such scale.

The disappointing Graves collection soon to be sold at Sotheby's 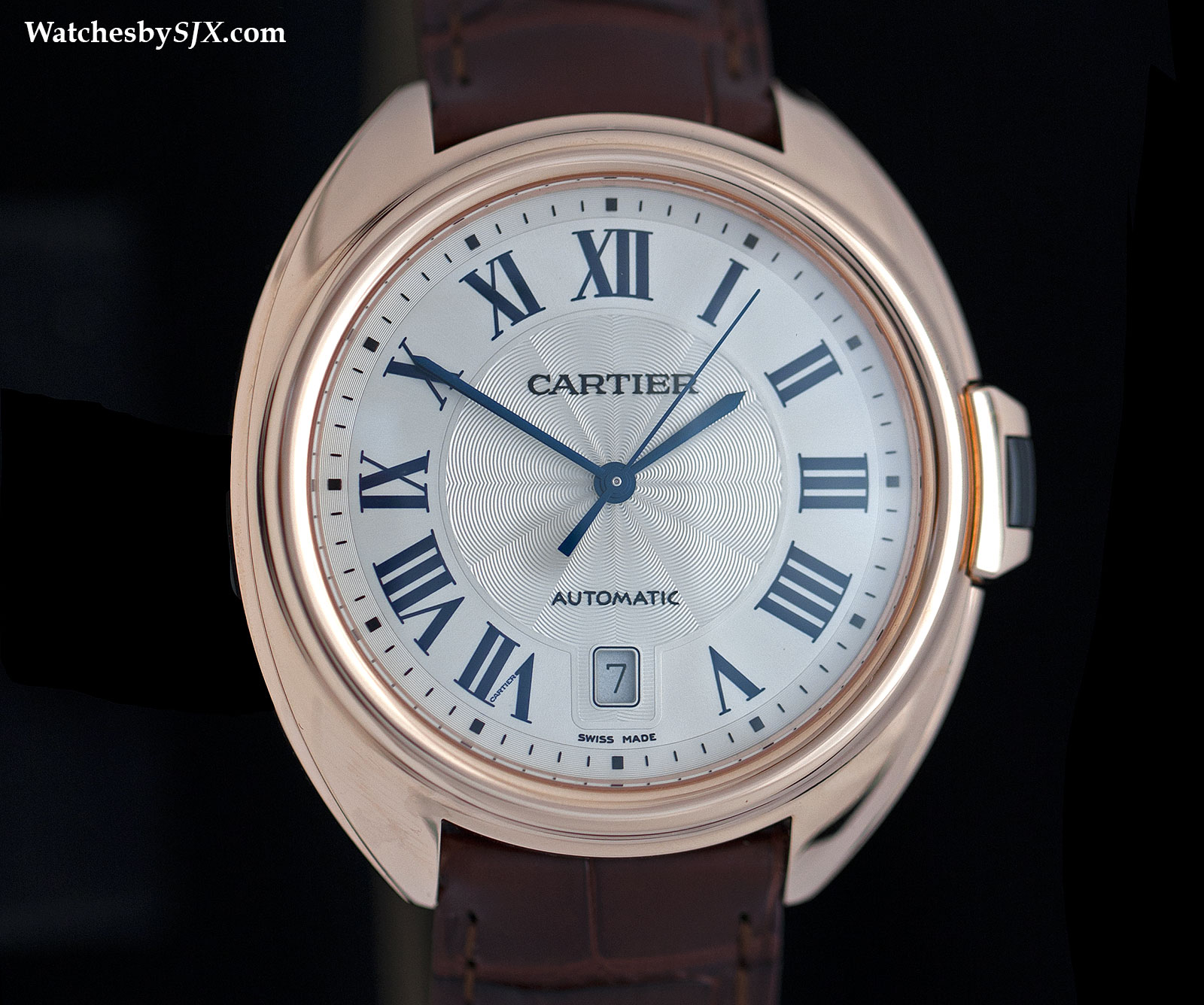 Cartier introduced the cushion-shaped Clé de Cartier at SIHH 2015, along with the new calibre 1847 MC inside, positioning it as the entry level model in its offering of watches with in-house movements. Classics like the Tank and Santos are the foundation of Cartier‘s watch collection, having been in production for over a century. But every few years Cartier will unveil a new case style, ranging from the traditional looking Ballon Bleu to the modern Calibre de Cartier. Unveiled only earlier this year, the Clé de Cartier tends towards traditional design, with a cushion-shaped case and the signature Cartier dial.  Ever so slightly curved, the cushion case is immediately reminiscent of the seventies. This case form was prevalent, most notably for sports chronographs that are popular now; examples include the Heuer Autavia and Zenith El Primero Datron. Its shape gives the Clé de Cartier volume, which is useful since the case diameter is small, being available in 31, 35 and 40 mm sizes for now. 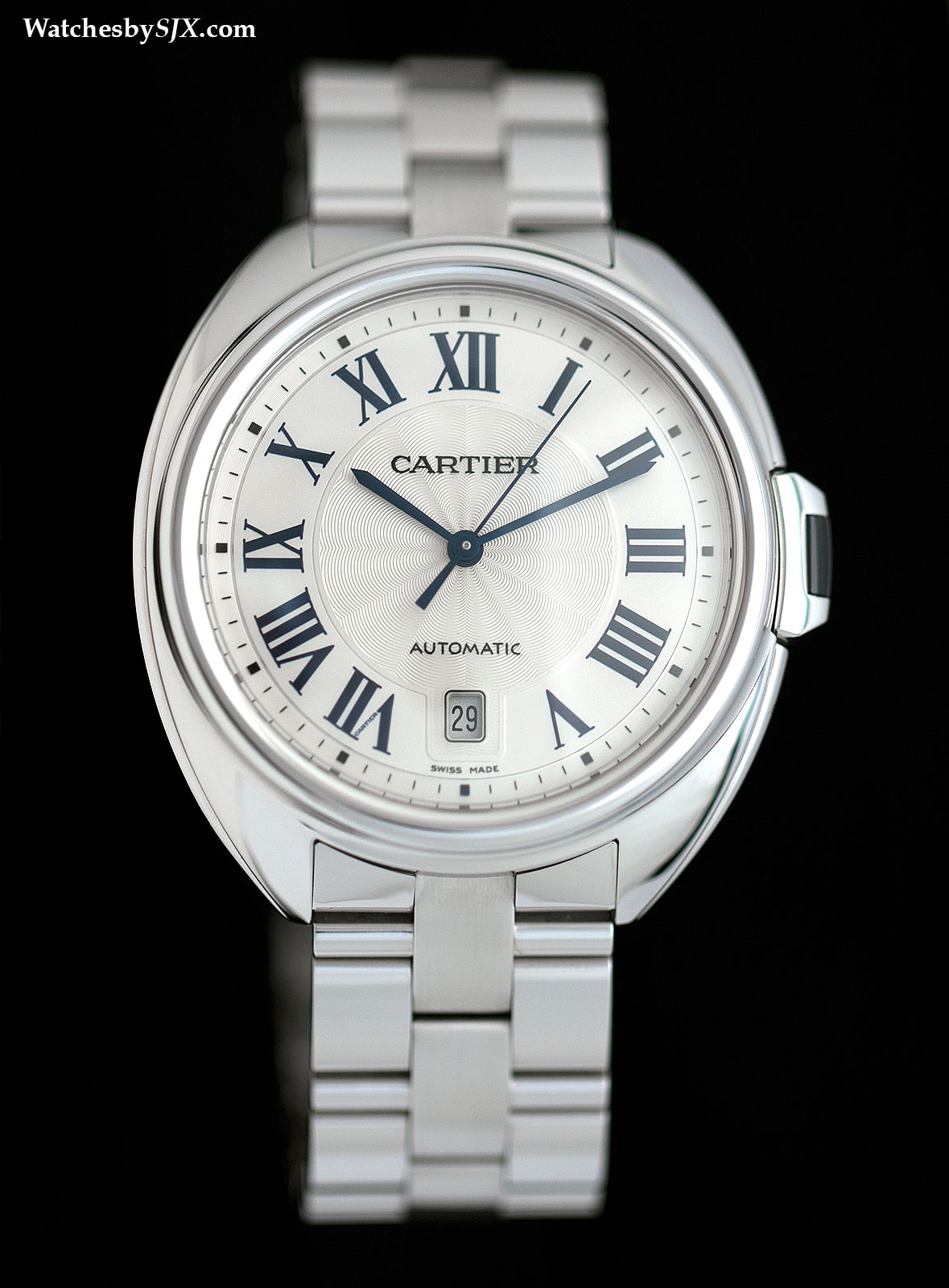 Clé is French for “key”, a reference to the shape of the crown. Oblong in shape and topped with a blue sapphire insert, the crown falls into place correctly each it’s pushed back in, ensuring it will never be misaligned. Operating the crown takes some getting used to for the oblong shape feels radically different from a conventional, round crown, though they function in exactly the same manner. Fortunately its designers elected to keep the classic Cartier style dial, instead of a seventies dial with blocky hands and indices. The sword hands are blued steel, with Roman numerals in dark blue to match. A subtle keyhole motif is integrated into the dial, with the central guilloche portion extending to include the date window at six o’clock. 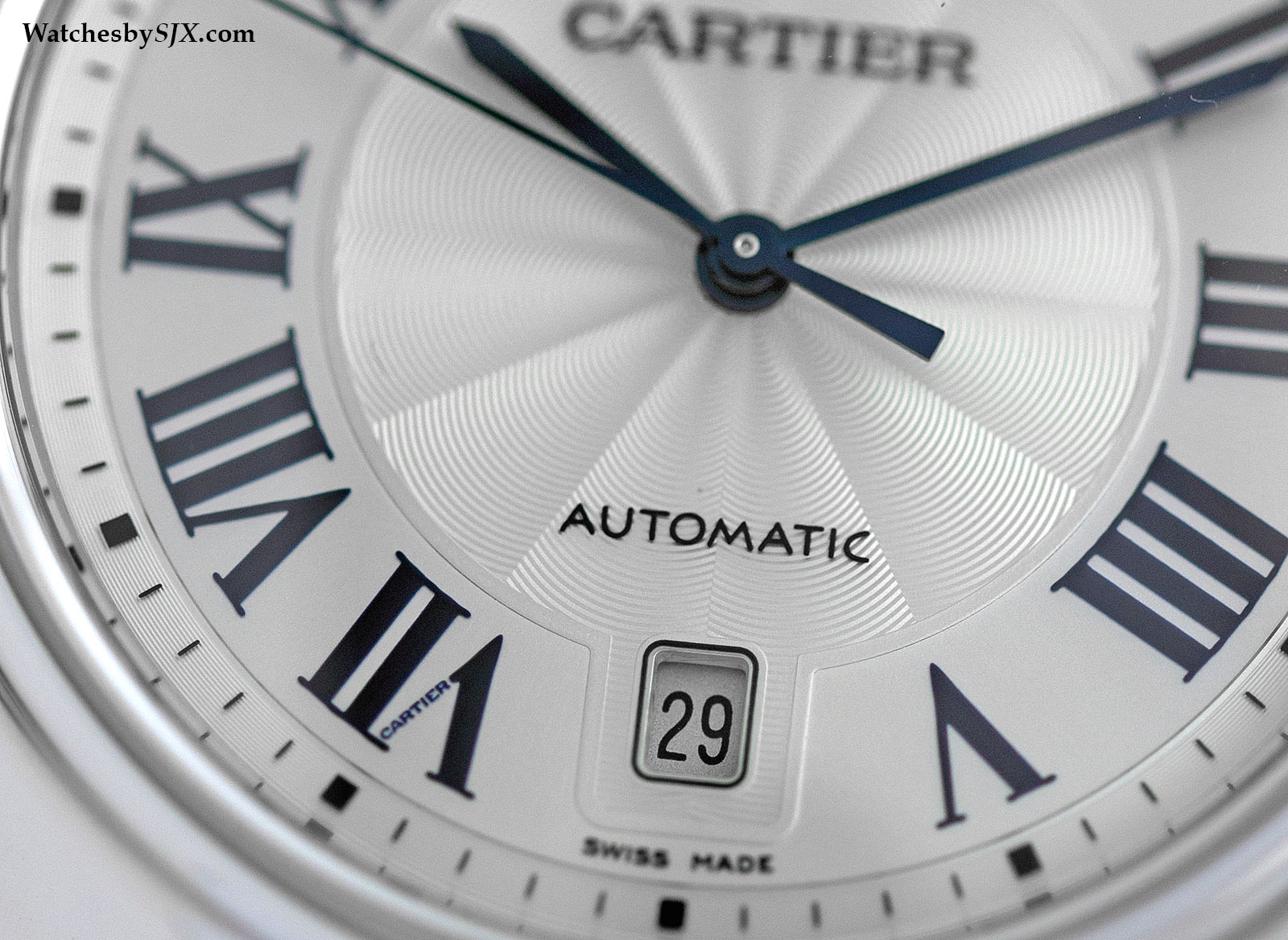 The display back reveals the 1847 MC movement, a newly developed calibre that is intended to be the most affordable in-house movement offered by Cartier. That’s reflected in the price of the Clé de Cartier; the average Clé de Cartier costs 15% to 20% less than a similar model equipped with the 1904 MC movement. That puts the Clé de Cartier in the same ballpark price as ETA movement-equipped Cartier watches. 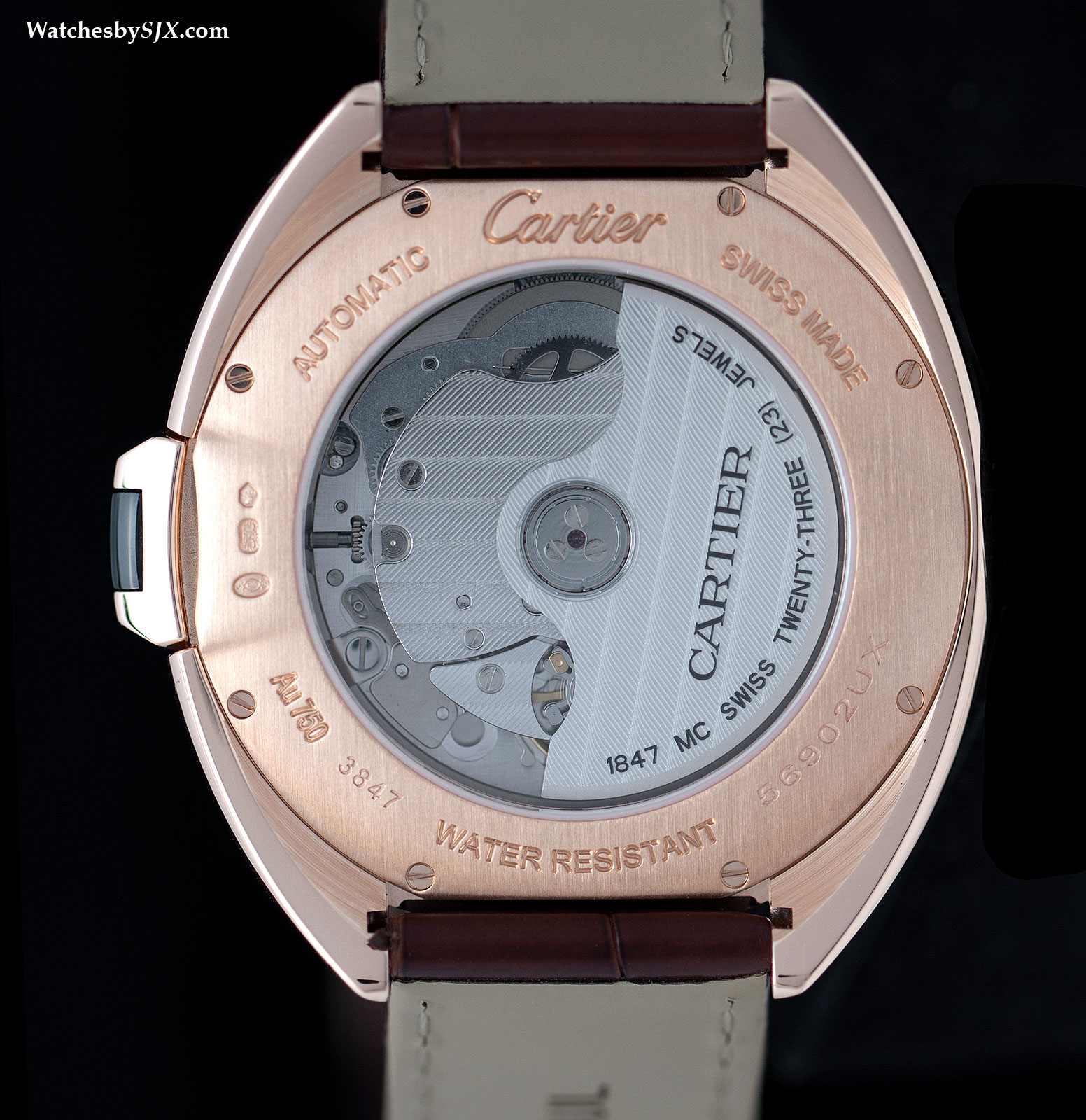 Affordability, however, means that the movement lacks the decoration found on the more expensive 1904 MC. The decoration is basic, with stamped Geneva stripes instead of the traditional polished finish. 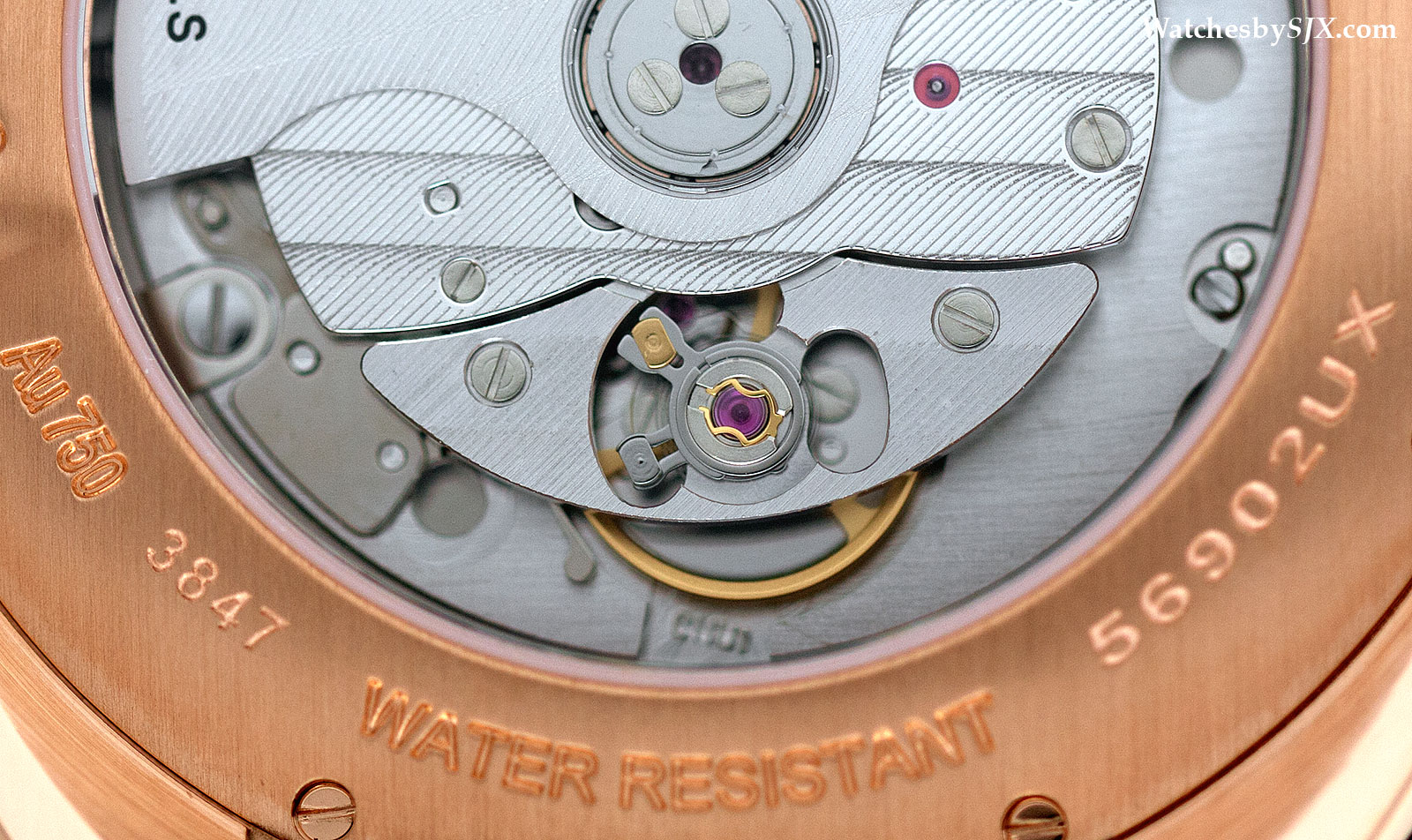 But in terms of construction and functionality, the 1847 MC scores well. The rotor winds in both directions thanks to the efficient and robust Magic Lever mechanism, and the balance wheel is mounted on a bridge (secured on both sides) for stability.  The Clé de Cartier is available only available in rose or white gold for now, in 31, 35 or 40 mm cases, on either a crocodile leather strap or matching gold bracelet. Only the 35 and 40 mm models are fitted with the 1847 MC. Typically the steel models are launched a year or two after the introduction of a new model. 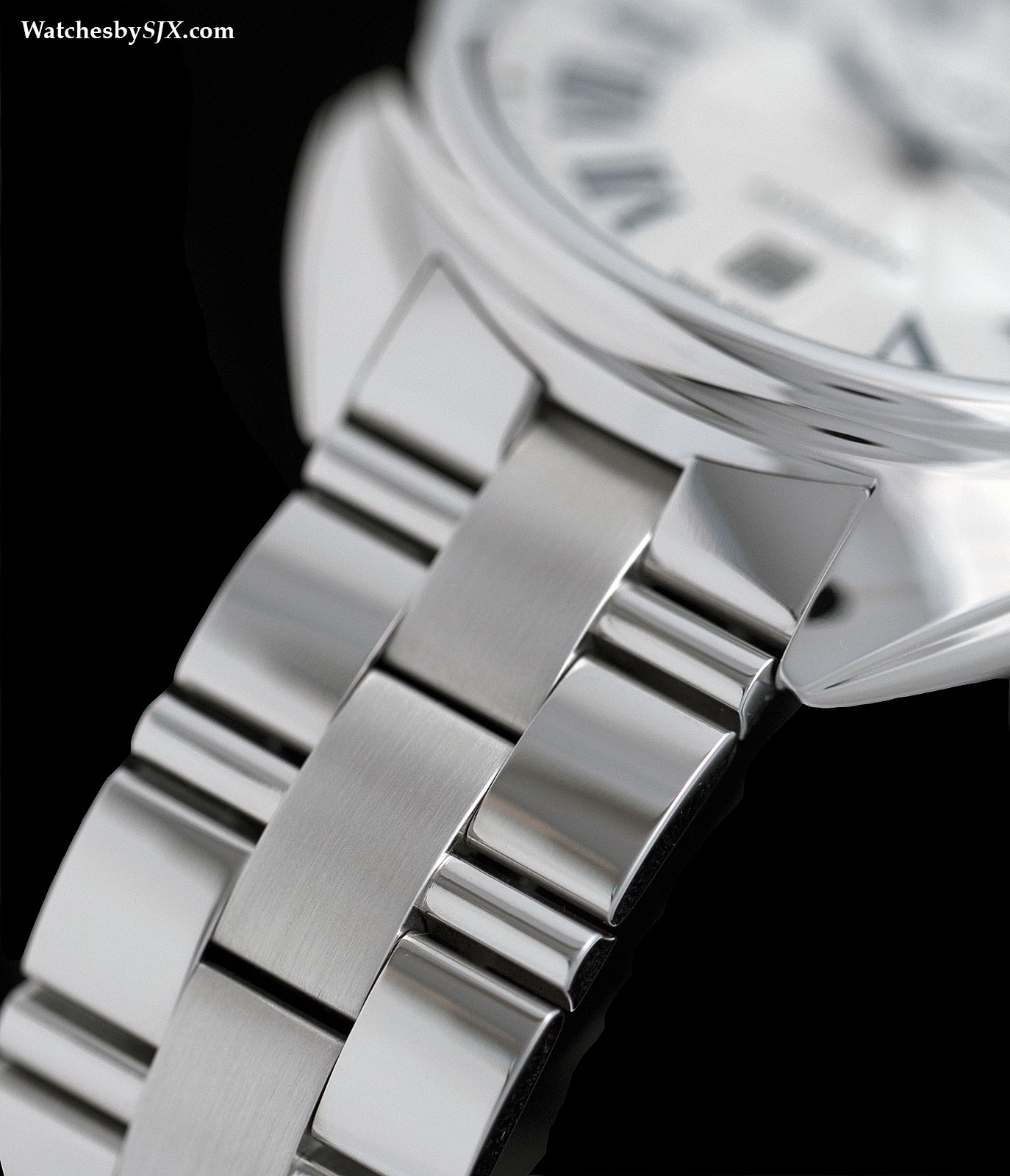 Available in stores starting April, the Clé de Cartier costs €13,760 in rose gold with a crocodile strap, and €27,410 for the same with a rose gold bracelet. Versions with diamond-set bezels start at €40,740 for the rose gold model, while the top of the line model is €126,000, with diamonds on the case, dial and bracelet. 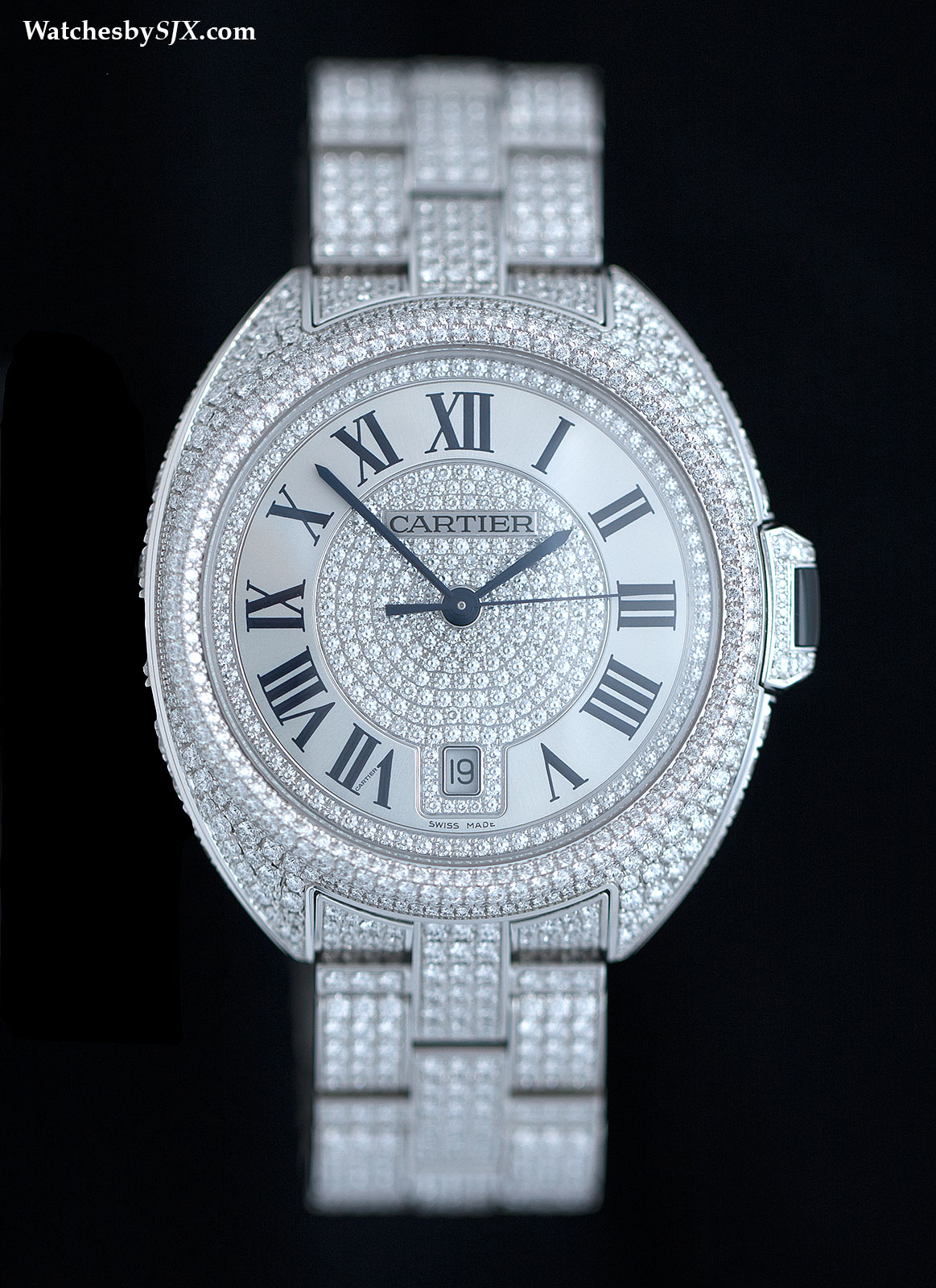 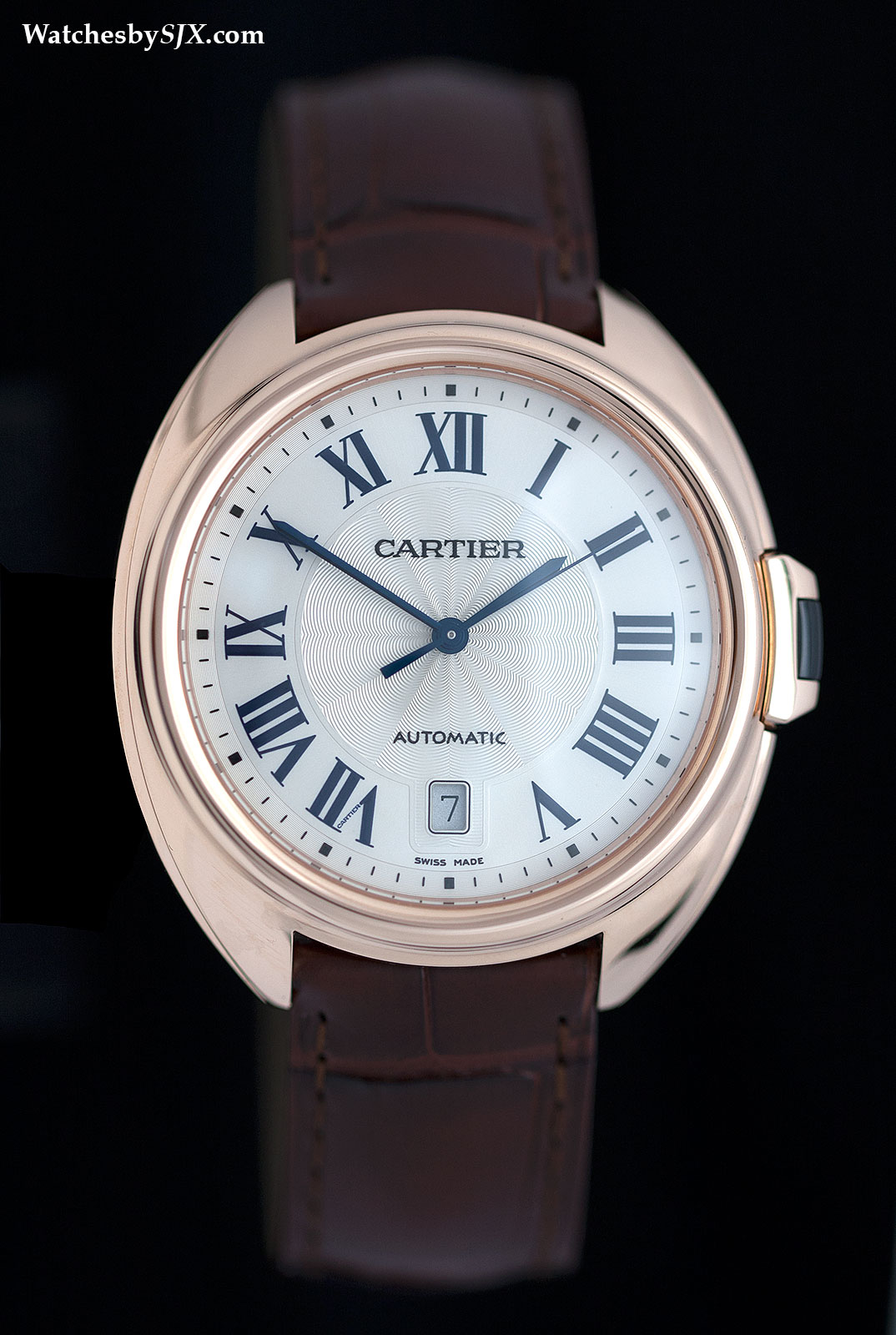