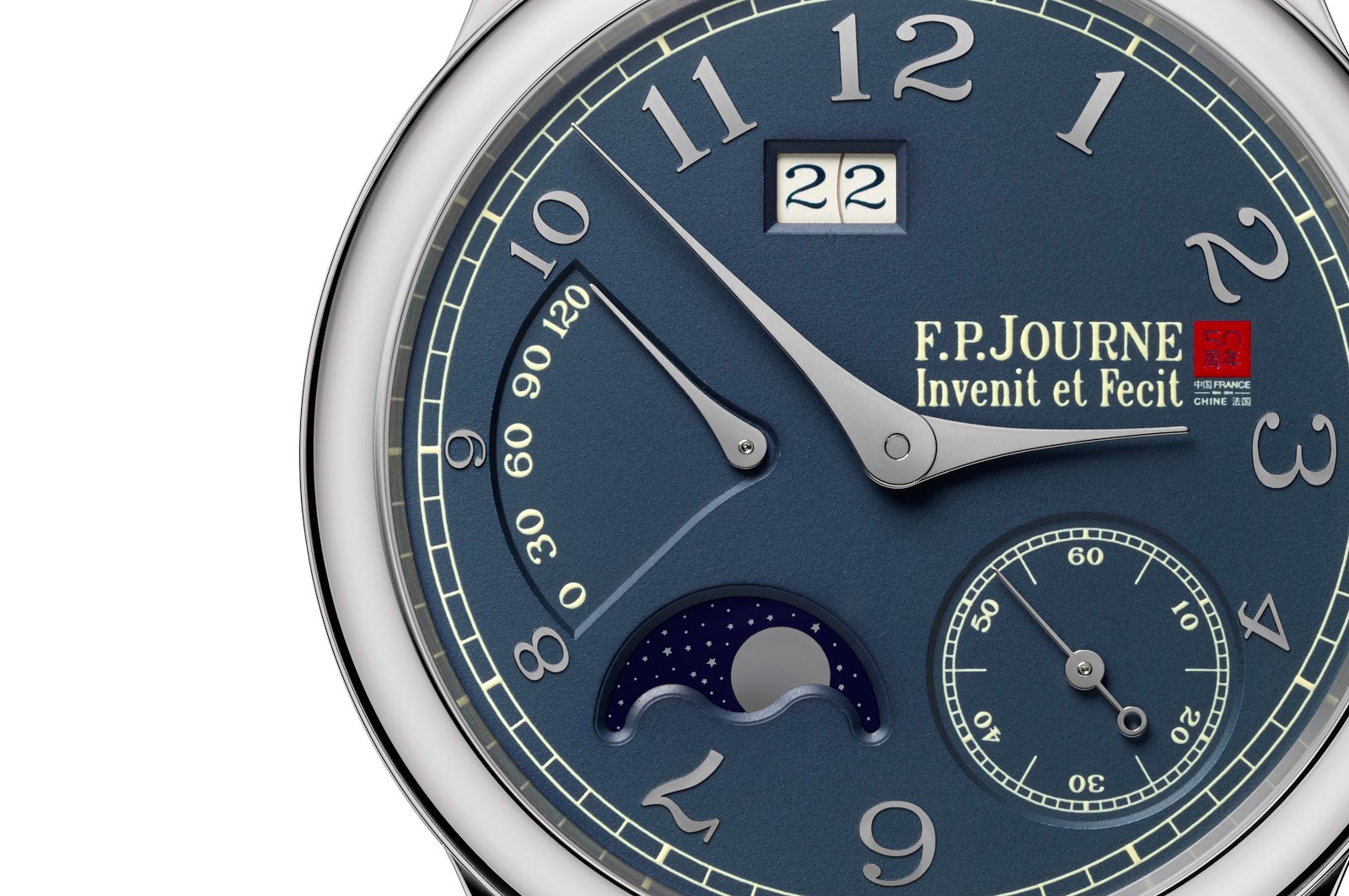 To mark the fiftieth anniversary of diplomatic relations between China and France, F.P. Journe has created a pair of limited edition watches, a blue dial Octa Automatique Lune and an Elégante with a jade dial. F.P. Journe is the official watchmaker of France-China 50, a series of events throughout 2014 held to commemorate 50 years of diplomatic ties between France and China. Though his eponymous brand is based in Switzerland, François-Paul Journe himself was born in Marseilles, and counts French horologists Breguet and Janvier amongst his inspirations. In a period where there seem to be almost as many limited edition watches for the Chinese market as there are people in the Middle Kingdom, F.P. Journe has created a pair of limited edition watches with the subtlest of references to the target market (Zenith’s most recent release was the polar opposite). The first limited edition is the France-China 50 Watch Octa Automatique Lune. With a 40 mm platinum case, this has a matte, dark blue dial, an uncommon colour for Journe timepieces. The numerals are applied white gold, and a tiny France-China 50 logo in red sits at three o’clock. This has all the slim, elegant proportions typical of F.P. Journe, along with well-considered details like the varying sizes of the numerals (notice 4, 7, 8, 9 and 10) to ensure the sub-dials do not cut into them. Inside is the calibre 1300, which is automatic with a 120 hour power reserve, as well as the solid rose gold bridges and base plate which are an F.P. Journe signature.  Ten pieces of the France-China 50 Watch Octa Automatique Lune will be made, with one for each of the ten F.P. Journe boutiques worldwide. However, additional pieces may be produced as special requests. This will retail for 50,000 Swiss francs, or about US$56,800. The second watch is the France-China 50 Elégante with a jade dial. The Elégante is F.P. Journe’s recently unveiled ladies’ watch with a clever electro-mechanical movement. The tortue-shaped case in platinum is paired with a translucent green jade dial that reveals some of the gears which drive the hands. Around the bezel and on the lugs are 54 diamonds totalling a modest 0.62 carats. Proprietary to F.P. Journe, the calibre 1210 of the Elégante goes into hibernation after 30 to 40 minutes, but once motion is detected it starts up and automatically resets to the correct time. This gives it a battery life of 8 to 10 years while in use, and up to 18 years in hibernation.  Only one of these jade dial Elégante watches will be made, however, more may be produced as custom orders. The retail price of the Elégante will be 36,600 Swiss francs, equivalent to US$41,700. 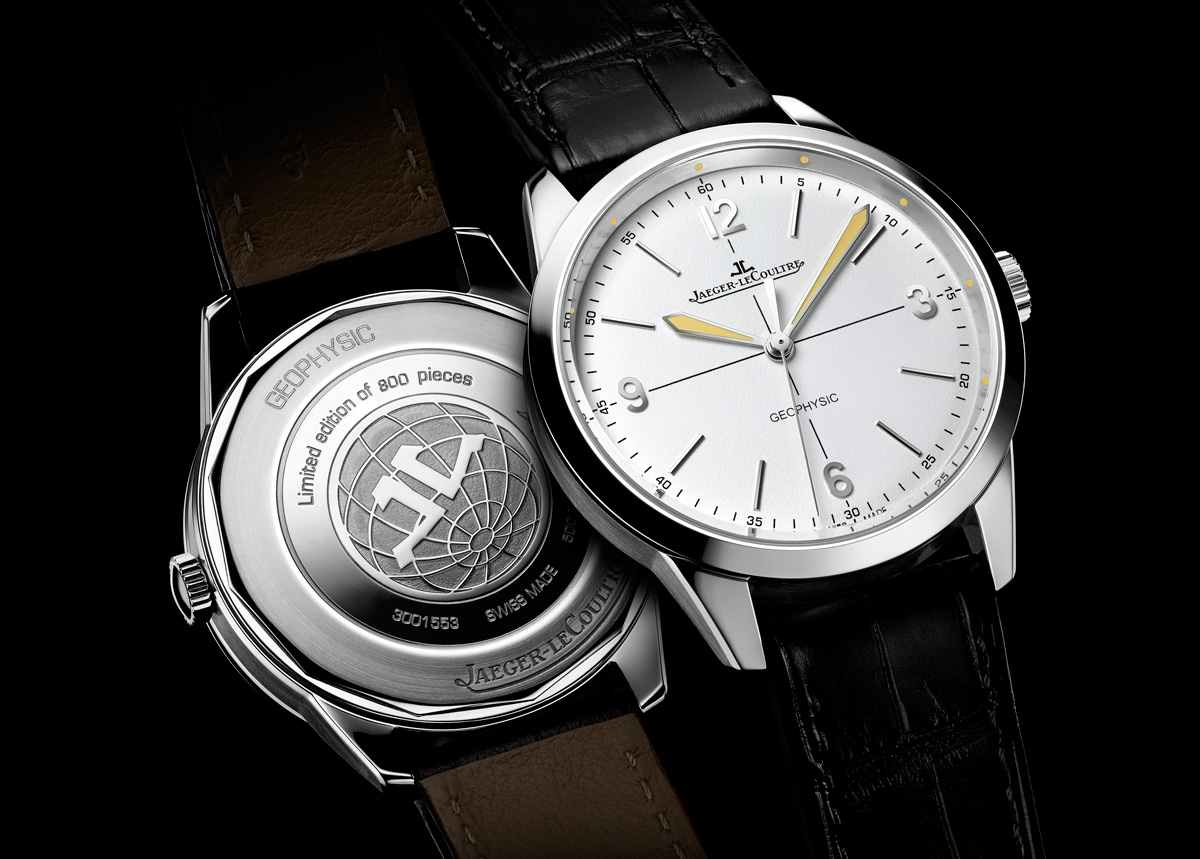 Jaeger-LeCoultre has remade its Geophysic chronometer as a limited edition, sticking closely to the aesthetics of the original but injecting modern features like a larger diameter and the self-winding calibre 898 movement. In 1958 Jaeger-LeCoultre unveiled the original Geophysic to coincide with the International Geophysical Year (IGY). Resistant to magnetism and equipped with the 478BWSbr movement JLC used in its Royal Air Force pilots’ watches, the Geophysic was conceived as a precise, durable and no-nonsense chronometer for the explorers and scientists taking part in the expeditions during the IGY. JLC has just unveiled a remake of the Geophysic, applying the same formula it used for the successful Reverso 1931 – an accessibly priced, vintage-style timepiece equipped with stock, modern movement.  Three versions are available – steel, pink gold or platinum – but all share the same basic specifications. Water-resistant to 100 m, the modern Geophysic is 38.5 mm in diameter, while the original was just 35 mm. Inside is the calibre 898/1, an automatic movement with a 43 hour power reserve. This is encased in soft iron, giving it protection from magnetic fields. While the movement is competent technically and decoratively, it is a stock movement and offers nothing more than the basic Master line automatic watches with the same calibre. All three versions have faux-patina lume on the hands but they are not all the same. The steel and pink gold models have a cross-hair dial, which is less common on the vintage models. The platinum version, on the other hand, has a cleaner dial that is conversely easier to find on the vintage Geophysic.

All three versions have Luminova dots on the chapter ring around the dial, whereas the original Geophysic had tritium dots painted on the underside of the crystal.  Limited to 58 pieces, the Geophysic in platinum will only be sold in Jaeger-LeCoultre boutiques with a retail price of US$32,000 or 42,600 Singapore dollars.