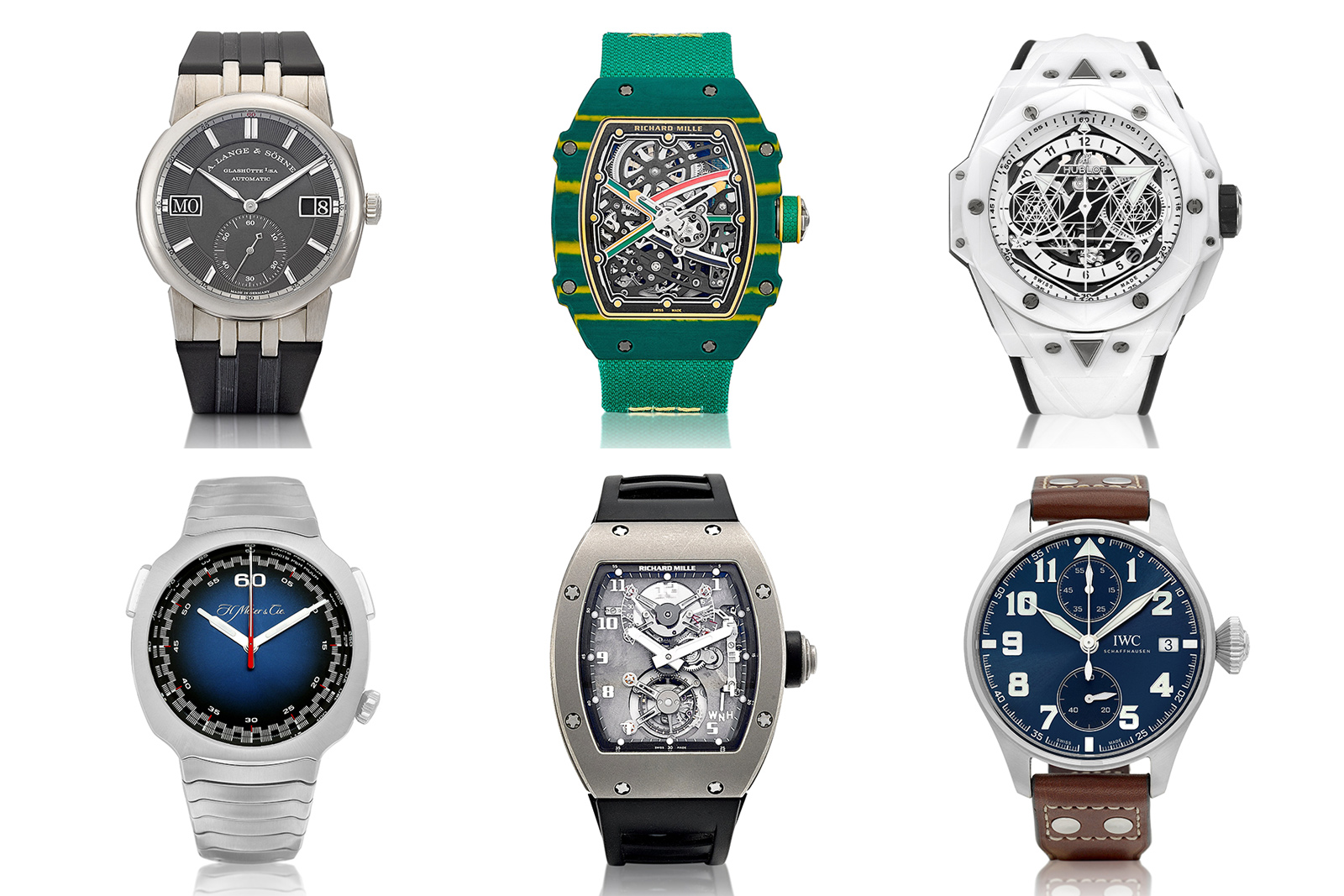 Following our round up of independent watchmaking highlights at the Sotheby’s upcoming Important Watches I auction in Hong Kong, we now turn to something more conventional and even fashionable: high-end sports watches.

But naturally we’re not going to run through the unorthodox examples that need no extra publicity (though one “hype” watch might have slipped in). Our selection of a half dozen includes an early Richard Mille and possibly a value buy, a IWC Big Pilot’s Watch Monopusher Edition that has an interesting and little known movement. 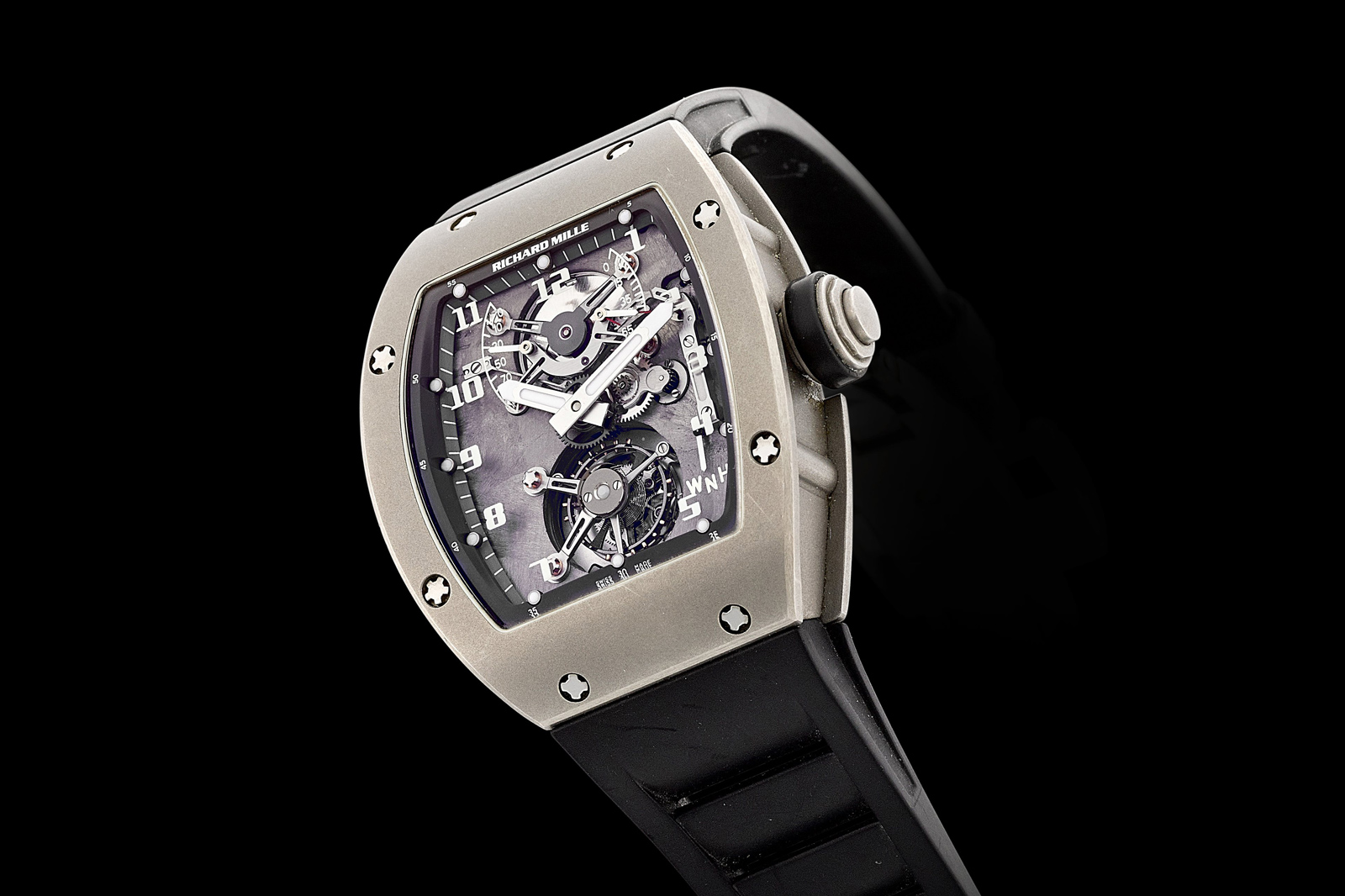 An entirely new collection that debuted just in time for the modern brand’s 25th anniversary, the Odysseus is an outlier for a watchmaker that historically focused on high-end, classical watches. Though the Odysseus sports a design that’s unsurprising for Lange, it is the brand’s first watch with an integrated bracelet.

More notably, the Odysseus was the first regular production Lange watch in steel. But we’re not here to talk about the heavily-hyped steel model, instead this is the model in white gold, which arguably offers more value than the steel version at market prices. 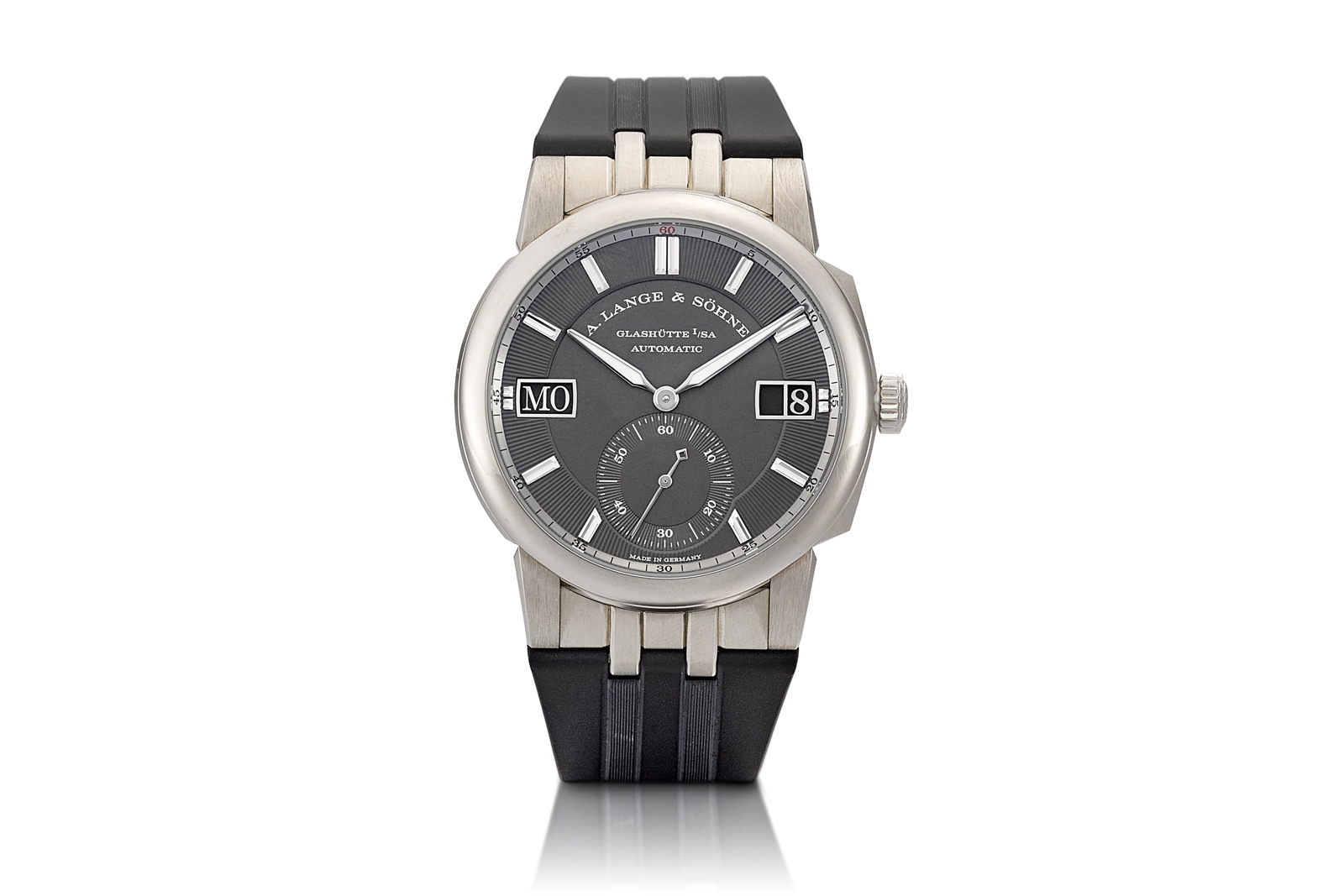 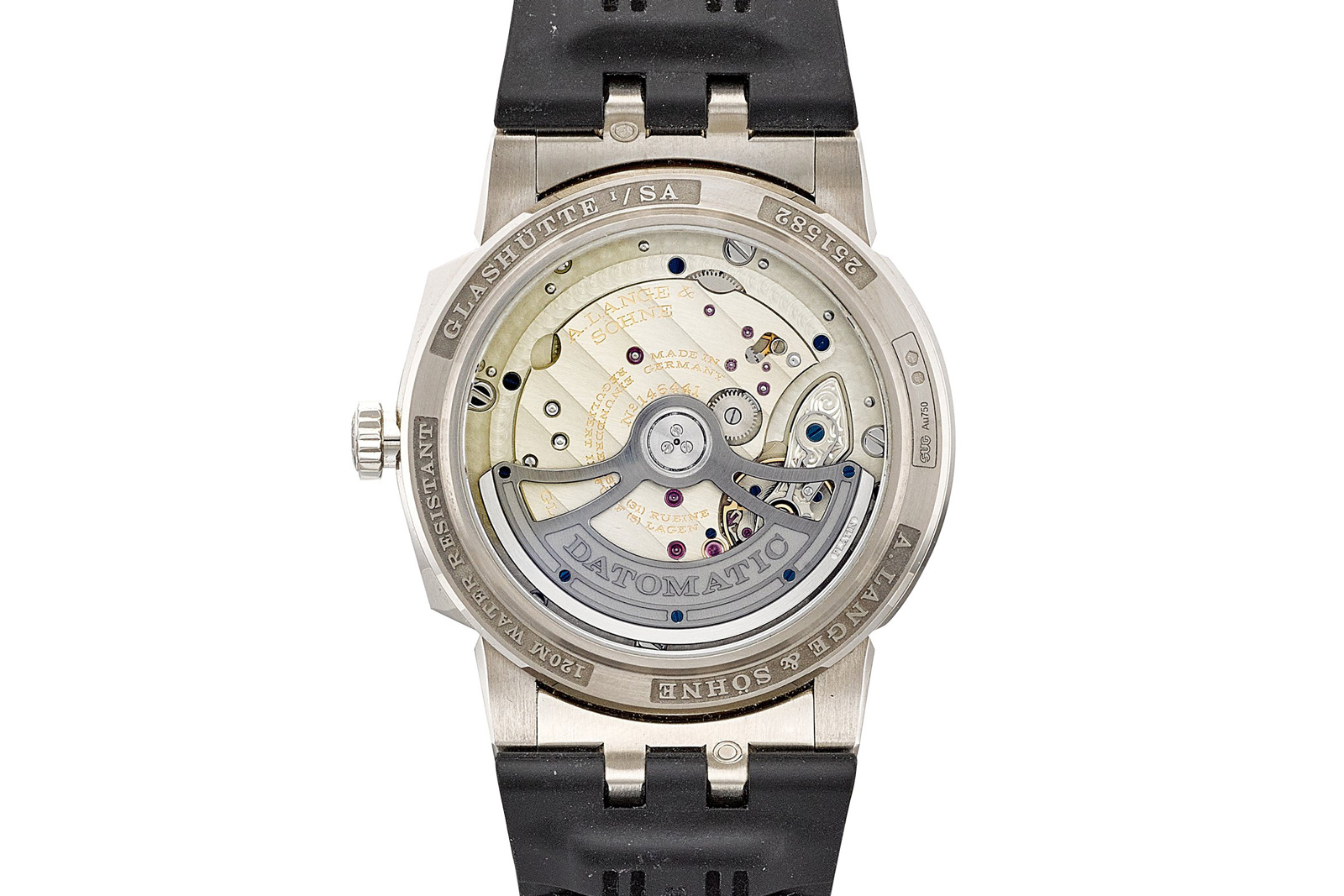 The integrated-bracelet sports watch arena has long been dominated by the Royal Oak and Nautilus, so what makes the Odysseus a contender?

The same character that sets other Lange watches apart from the completion, a tangible quality of build. Technically-minded collectors, as most Lange collectors are, will appreciate technical features unique to the movement that were specifically developed for a sports watch, such as the larger-than-usual balance wheel and a full balance bridge for better shock resistance. 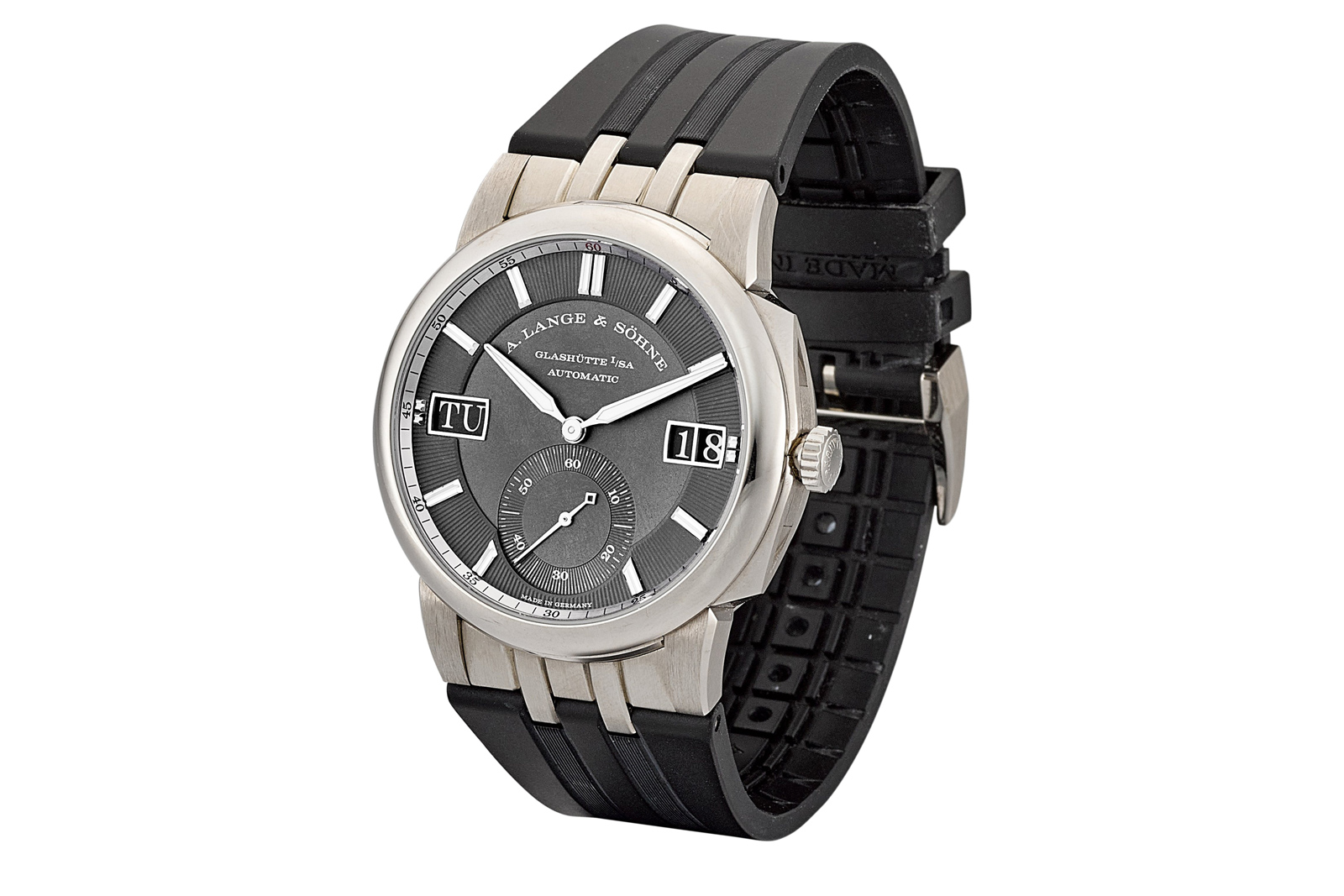 To date, the Odysseus has only been available in steel, white gold, and most recently, titanium. The present example is in white gold and fitted to a rubber strap, which is a better look than the bracelet to some. The watch shows obvious signs of wear, but no major damage. It has an estimate of HK$400,000-700,000, or about US$50,600-89,200.

Perhaps the maker of exotic sports watches, Richard Mille (RM) specialises in outrageous styling matched by impressive wearability, thanks to an ergonomic tonneau case often made of lightweight composites.

The RM 67-02 is amongst the lightest watches ever – and the lightest automatic RM ever – at just 32 grams, equivalent to six sheets of A4 paper. Unusually for an RM, it is also extra-flat, measuring just 7.8 mm from front to back. 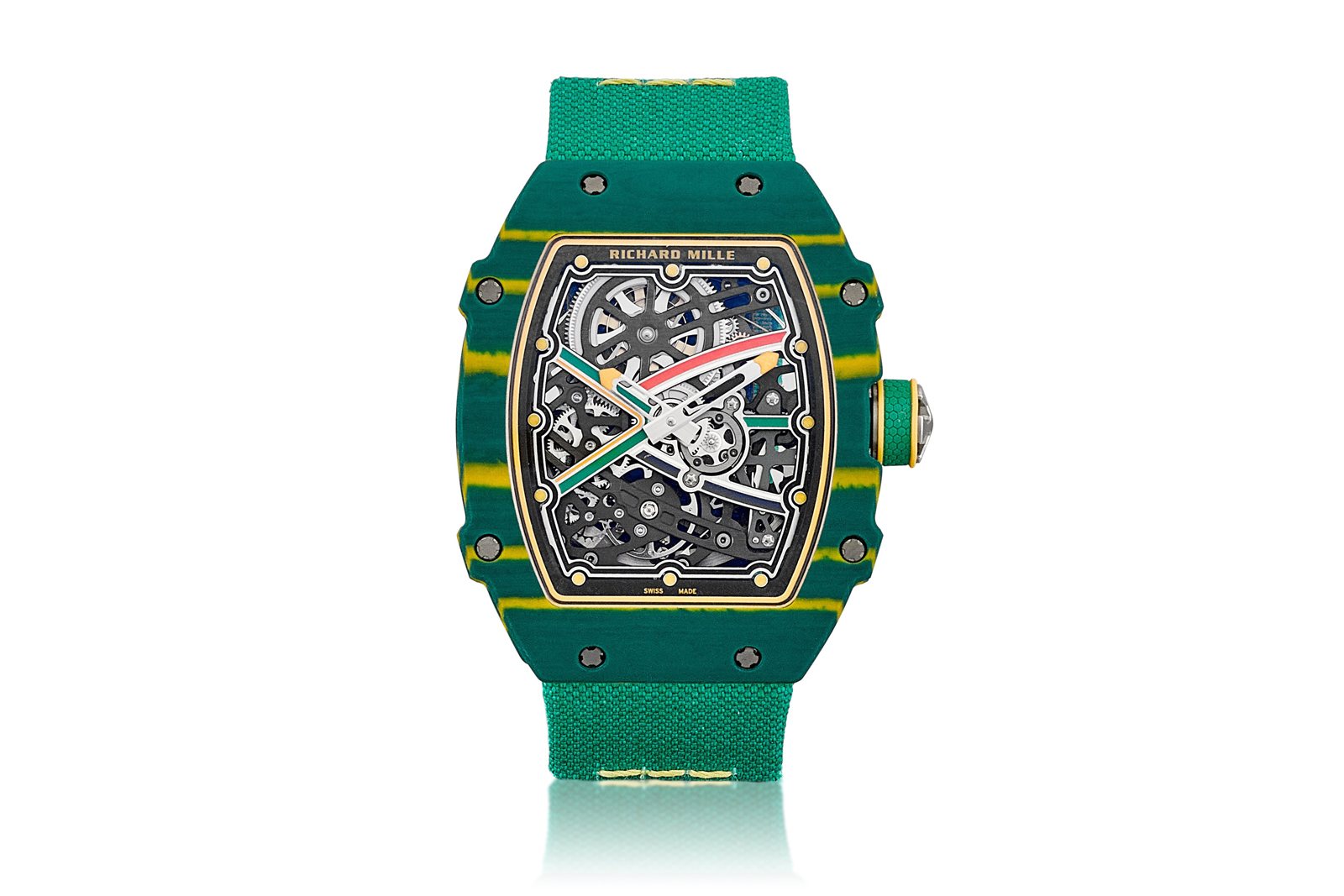 Being light and flat – and attached to a stretchable fabric strap – the RM 67-02 is a perfect sports watch since it feels like nothing on the wrist (though the price might be a consideration).

Indeed, the RM 67-02 was developed specifically for track and field athletes. This version with a green and yellow Quartz TPT case was conceived for South African Olympic champion Wayde Van Niekerk, holder of the world record for the 400 m sprint. 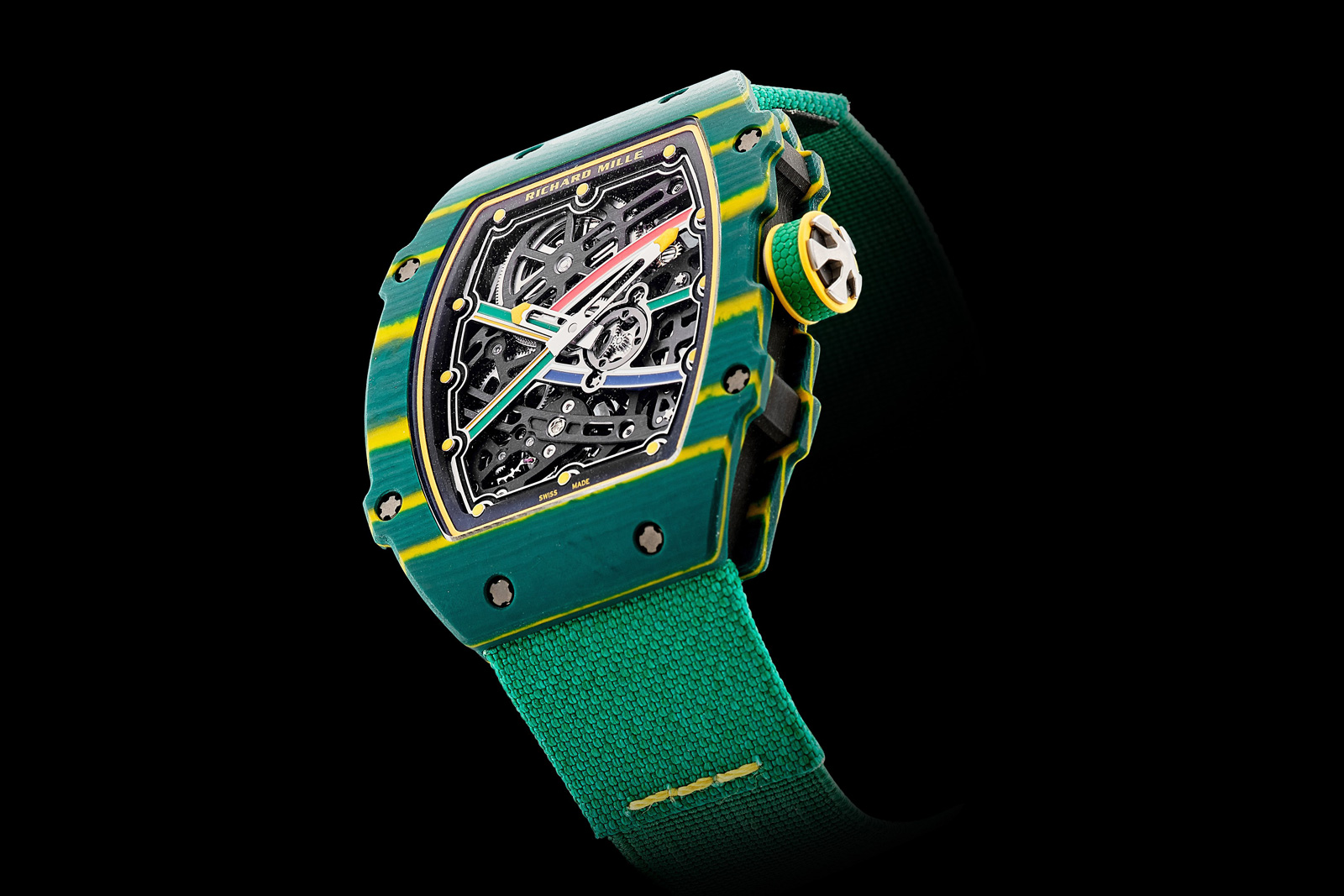 Notably, the RM 67-02 encapsulates the brand’s focus on innovative materials and unorthodox deisgn, exemplified by the Quartz TPT case. Developed with Swiss material specialist NTPT, Quartz TPT is a hard but light composite consisting of alternately-positioned layers of carbon fibre and silica that’s then dyed and baked in an oven.

The resulting block is then milled in a manner that reveals the strikingly organic grain of the material, which is also in the colours of the South African flag. 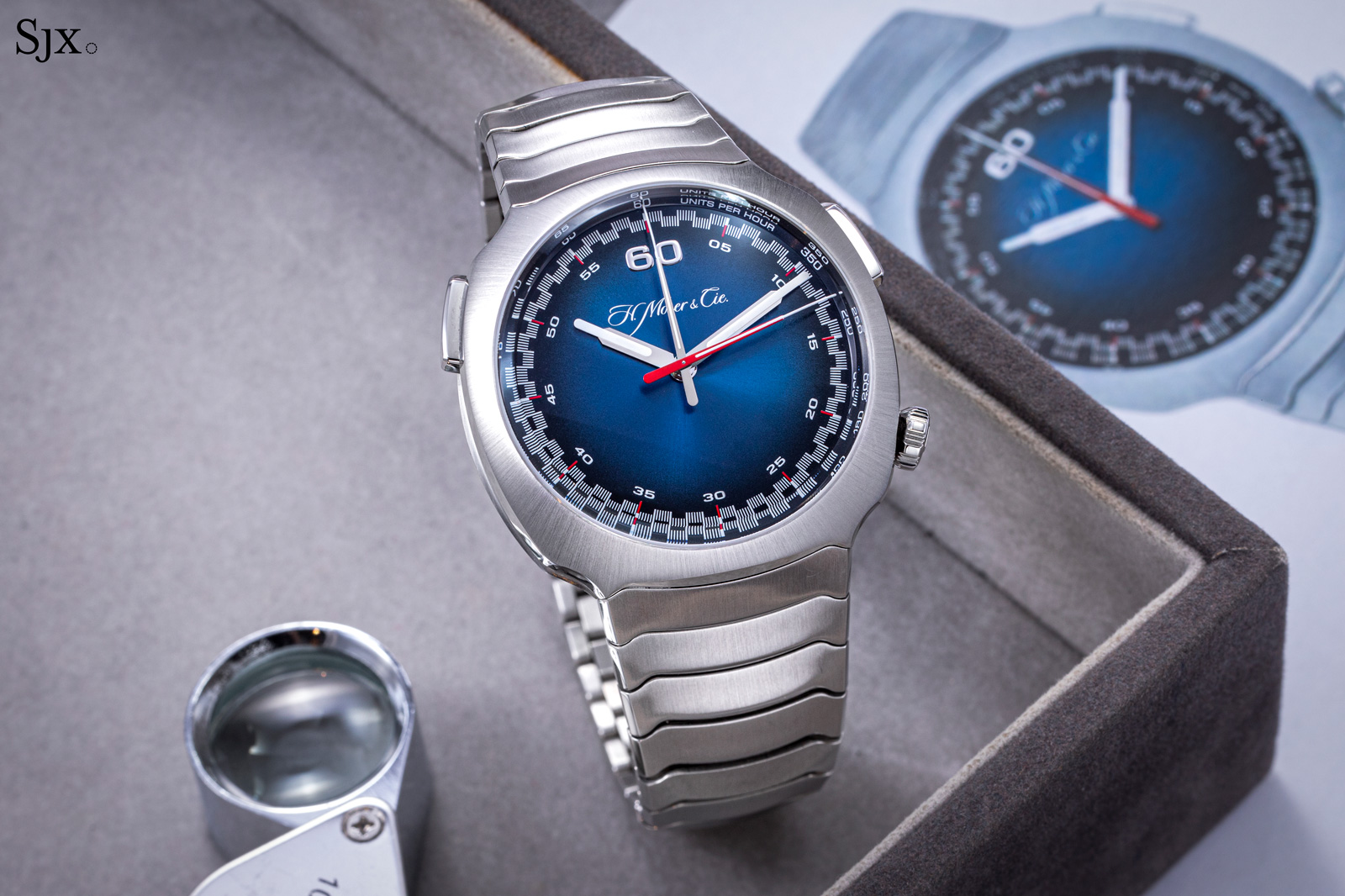 Though the face is deceptively simple, this watch is actually a flyback chronograph that has the elapsed minutes and seconds subtly integrated into the dial. Both elapsed time hands are co-axial with the hour and minute hands, while the elapsed time scales are on the periphery of the dial. 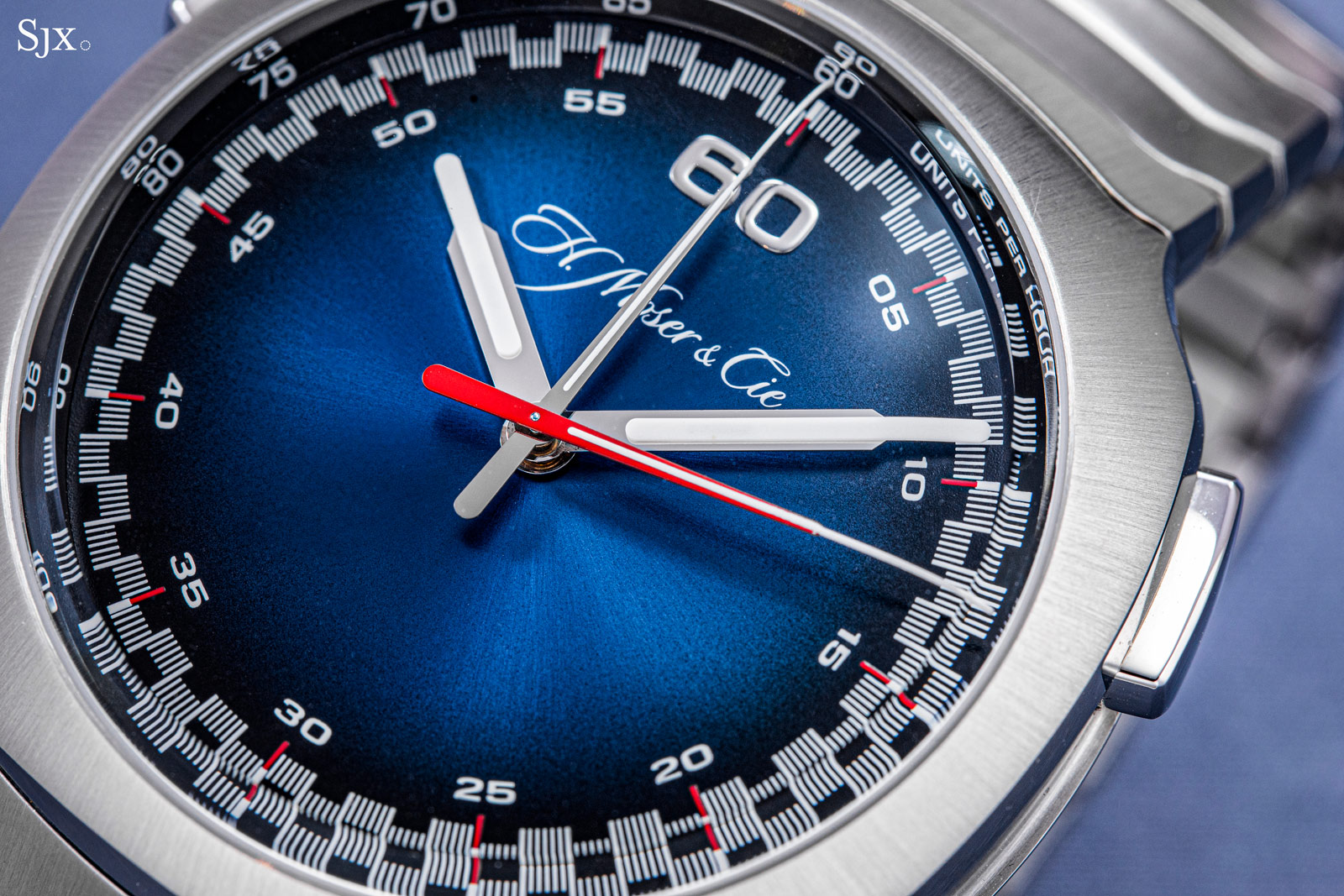 The unconventional design comes courtesy of the ingenious movement within, a self-winding calibre developed by Agenhor that’s perhaps the most innovative contemporary chronograph movement. Notably, the Streamliner was made its debut as a chronograph instead of a time-only watch, which means this is the foundational model for the family. The chronograph was launched in 2020 as a limited edition with a grey dial, follow by the present example with a blue fume dial. Hublot is often made fun of for its over-the-top watches and countless limited editions, but it does do some interesting things in both movements and materials. One such example is the Sang Bleu, a series of watches that feature a complex, geometric dial and case designed by the eponymous Swiss tattoo studio led by Maxime Plescia-Büchi, a watch enthusiast himself. The Sang Bleu II takes Plescia-Büchi’s to the next level by incorporating a chronograph into the design. The repeating, nested triangles are applied to all the hands, for the time as well as the chronograph. While that inevitably chips away at legibility, it does make for striking visuals. In fact, it almost seems like the intention was to camouflage the hands, resulting in a textbook example of form overtaking function – but for good reason. The result is a watch that’s a kinetic sculpture first and time display second.

Ironically, the fact that its time-telling functionality is subtle is perhaps a plus, as it conceals the chronograph, making the complication apparent only to the owner. In the same vein, the chronograph pushers are subtly integrated into the angular case, resulting an almost symmetrical case. While many Hublot chronographs rely on fuss-free Sellita movements, this is powered by the in-house Unico calibre. More specifically, it’s a Unico base movement with a chronograph module that’s been open-worked to reveal the chronograph mechanism, which is visible below the triangular hands.

One of the more interesting IWC chronographs, the Big Pilot Monopusher received surprisingly little recognition. It’s a variant of the brand’s iconic Big Pilot’s Watch, but with a twist. Retaining the 46 mm case and extra-large “onion” crown, the present example is actually a chronograph, though it might not be obvious at first glance. That’s because the chronograph pushers have been condensed into one button integrated into the crown. That’s thanks to an in-house, hand-wind movement that boasts a power reserve of eight days. More importantly, the movement sports an integrated chronograph mechanism that has both a column wheel and lateral coupling. This version is a limited edition from the Le Petit Prince collection that’s distinguished by a metallic blue dial along with applied markers that are unusual for an IWC Pilot’s Watch. The Gothic-style font of the hours numerals is also unique to Le Petit Prince editions. The applied luminous numerals also means the entire dial is “lumed”, unlike the standard Pilot’s Watch models that have only luminous quarters. Like the RM 67-02 above, the RM002-V2 is a thin and compact offering from RM, but it comes from an entirely different era. In fact, the RM002 was launched almost two decades before the RM 67. In contrast to the bright colours of most current RM models, the RM002-V2 has a muted, technical look that’s typical of the brand’s earlier watches. But still remains instantly recognisable as a RM. The RM002 was an improved version of the RM001, the watch that set the template for the RM’s distinctive styling. Both were inspired by Formula 1 cars and feature a tourbillon regulator, an unusual feature for a sports watch when they made their debut the early 2000s. Compared to the RM001, the RM002 has the addition of features such as the crown-function selector and winding torque indicator.

While the initial run of the RM002 had a black-coated brass base plate, the subsequent version featured a carbon composite base plate, hence the “V2” suffix. The marbled surface of the composite is immediately obvious when you examine the movement. The present example is a limited edition version of the RM002 with an “All Grey” facelift that includes a grey dial flange and grey carbon base plate (both are black on the standard model), as well as a matte, frosted titanium case.

All lots will be on show during the preview in Hong Kong during the run-up to the auction, which will happen at the Hong Kong Convention and Exhibition Centre (New Wing).