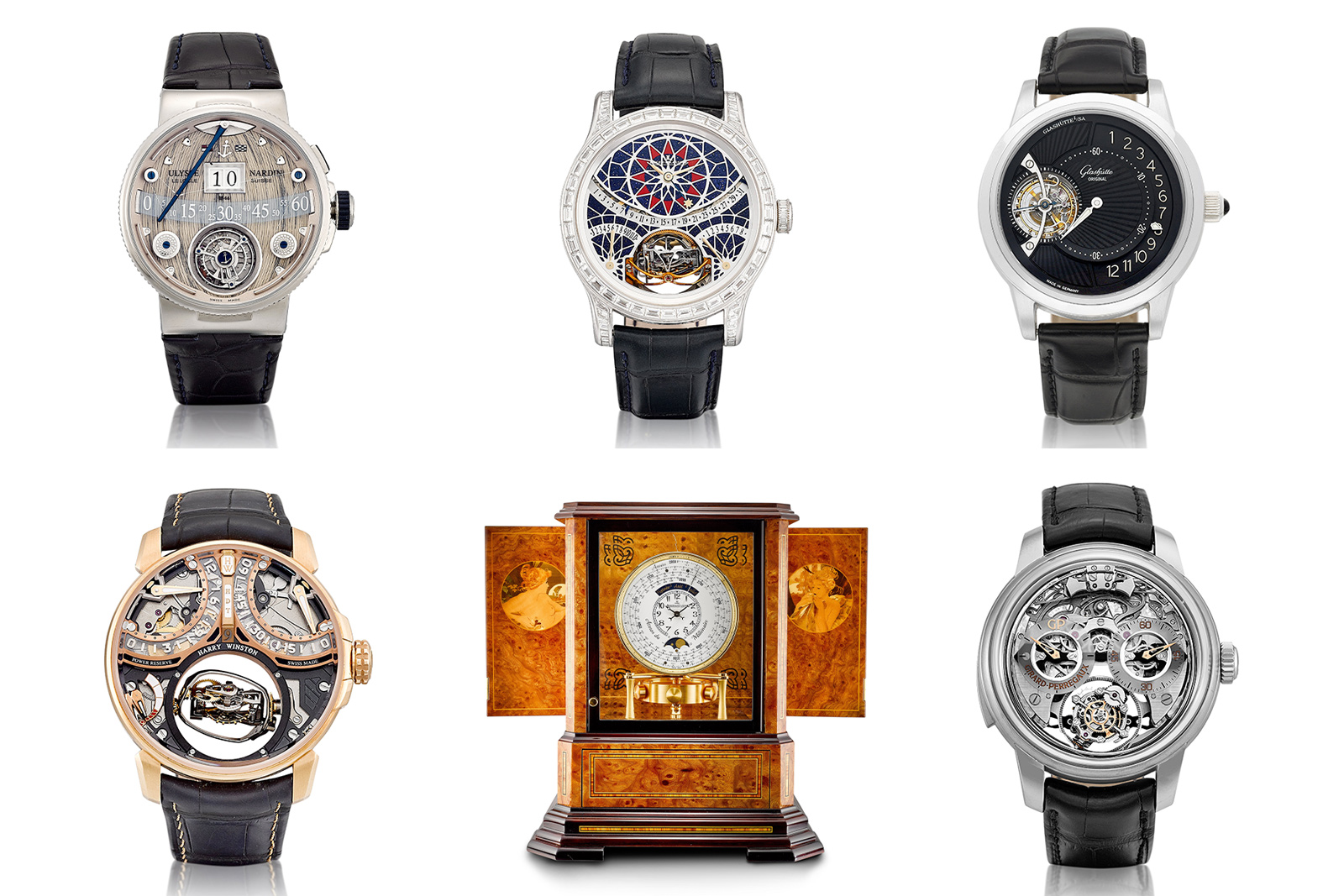 After looking at some of the highlights of independent watchmaking and unorthodox sports watches at Sotheby’s upcoming sale in Hong Kong, our final instalment covering notable lots is all about avant-garde complications – most of which are far more affordable than the original retail prices suggest.

Naturally the selection is by big-ticket mega watches such as the Patek Philippe Sky Moon Tourbillon, but it includes several more creative and intriguing watches that aren’t widely known. Amongst them are a pair of Harry Winstons with exceptionally complex reinterpretations of the tourbillon, along with a Ulysse Nardin featuring a pulley-operated retrograde hand. 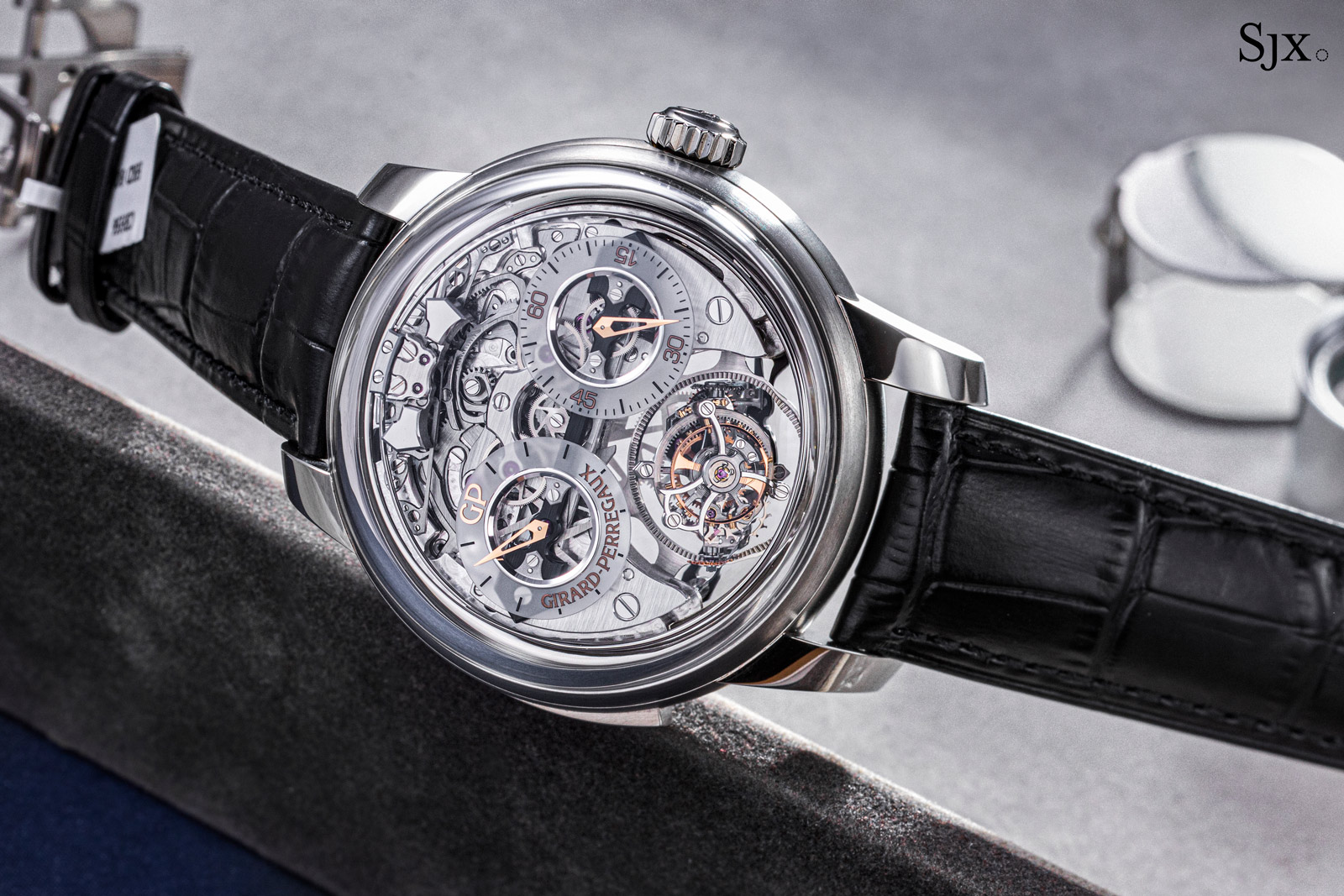 Unsurprisingly, the tourbillon assembly is extremely complicated – it consists of almost 150 parts – and takes centre stage on the dial. The tourbillon sits in a wide-open aperture that gives it maximum visible from both sides of the watch. 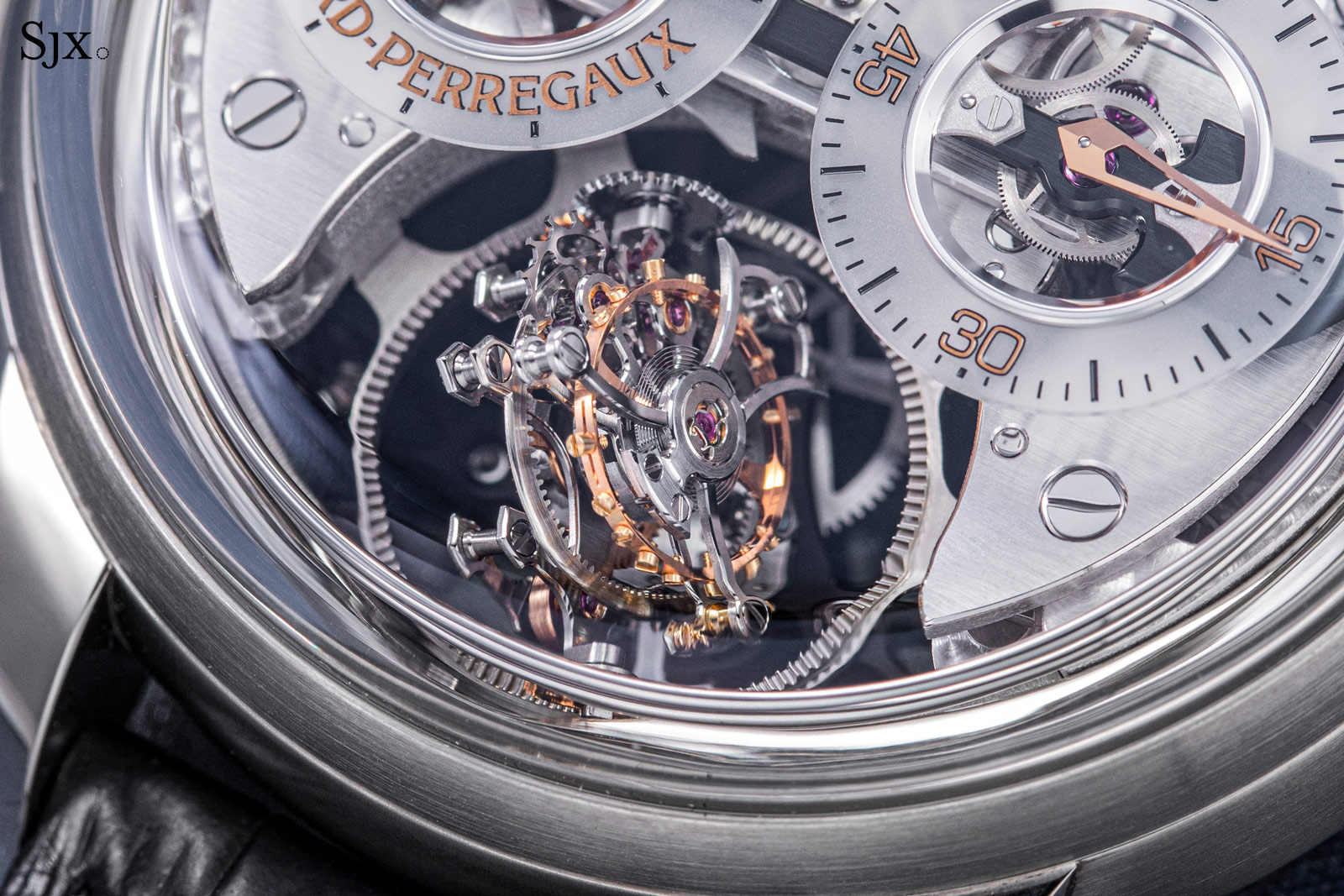 The movement itself has an open-worked construction such its mechanics can also be admired from front and back. The visible mechanics on the dial reveal the watch is much more than just a tri-axial tourbillon. It’s also a minute repeater with the hammer, gongs, and racks on the front of the watch at 12 o’clock, presenting another element for the wearer to admire. 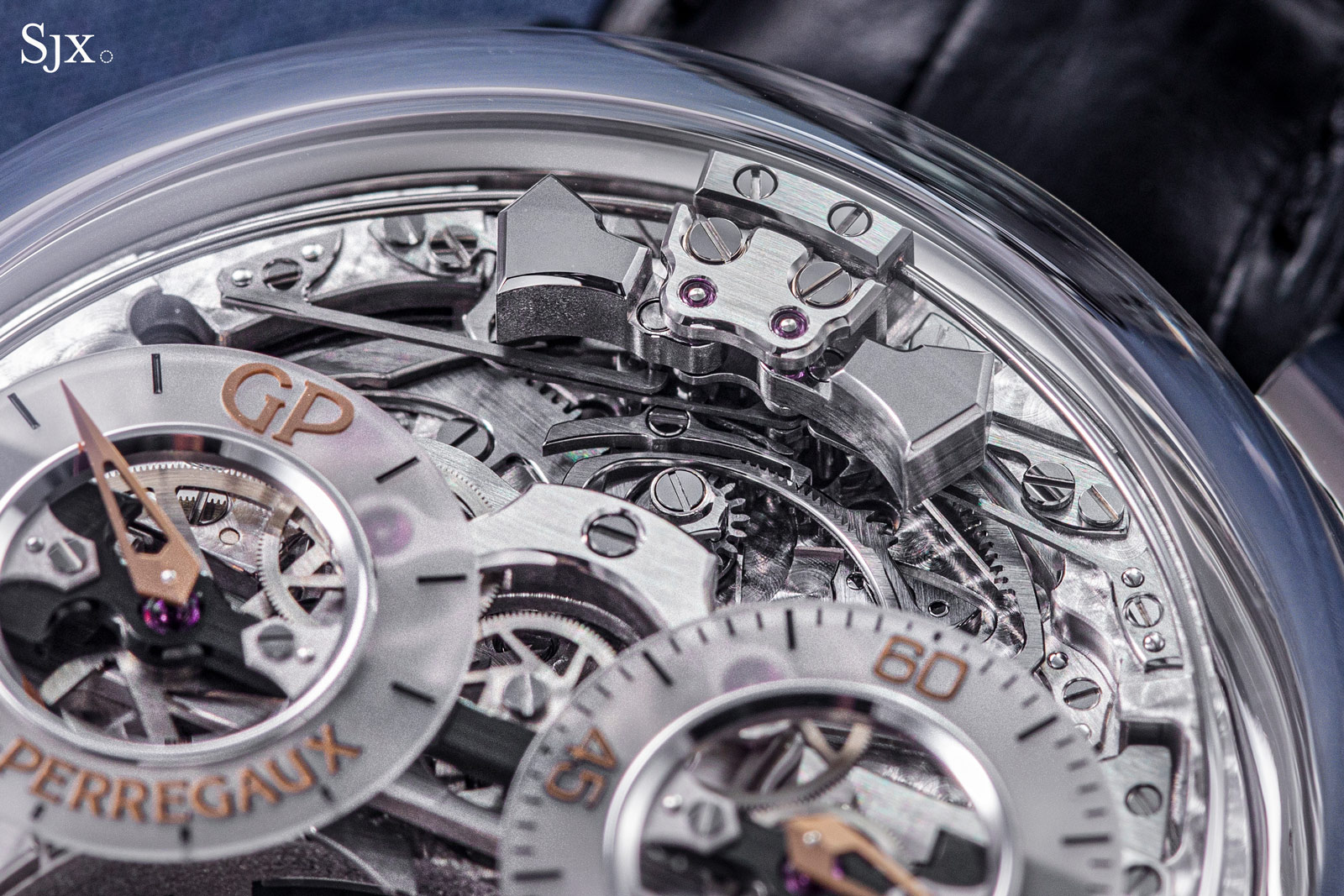 Though the watch is huge at 48 mm in diameter and substantially thick, the scale is justified by the sheer complexity – the movement comprises 518 parts. Wearability, however, is improved by the fact that the case is lightweight titanium, which also boosts the volume of the repeater due to its low density. The Minute Repeater Tri-Axial Tourbillon has an estimate of HK$800,000-1.2 million, or about US$101,900-152,900, a relative bargain for a flagship complication that originally retailed for over half-a-million dollars.

Though Harry Winston is best known for the discontinued Opus series, it also boasts another line up of highly exotic complications known Histoire de Tourbillon. The collection made its debut in 2009 with one edition launched annually, resulting in ten instalments so far.

Notably, most of the movements were created with the help of Greubel Forsey’s sister company Complitime, explaining the conceptual similarity between the calibres found in the Histoire de Tourbillon watches and those of Greubel Forsey. One of the most exotic amongst the ten models to date is the Histoire de Tourbillon 7 introduced in 2016. It has not one but two tourbillons, each a bi-axial construction and both linked by a differential to average out the errors between the two. It takes the concept of the tourbillon to the linear extreme since timekeeping errors will be arguably minimal to begin with, since each balance wheel is already constantly rotated through multiple positions, minimising the effect of gravity. The twin tourbillons are rightly the visual highlight and occupy half of the dial. The indicators sit around the tourbillons, allowing maximum visibility for architectural and dynamic mechanism. Each tourbillon has an outer cage that completes one rotation in just 45 seconds.

Time telling is done conventionally, but the watch does incorporate a novel power reserve indicator in the form of a rotating cone tucked away at six o’clock. 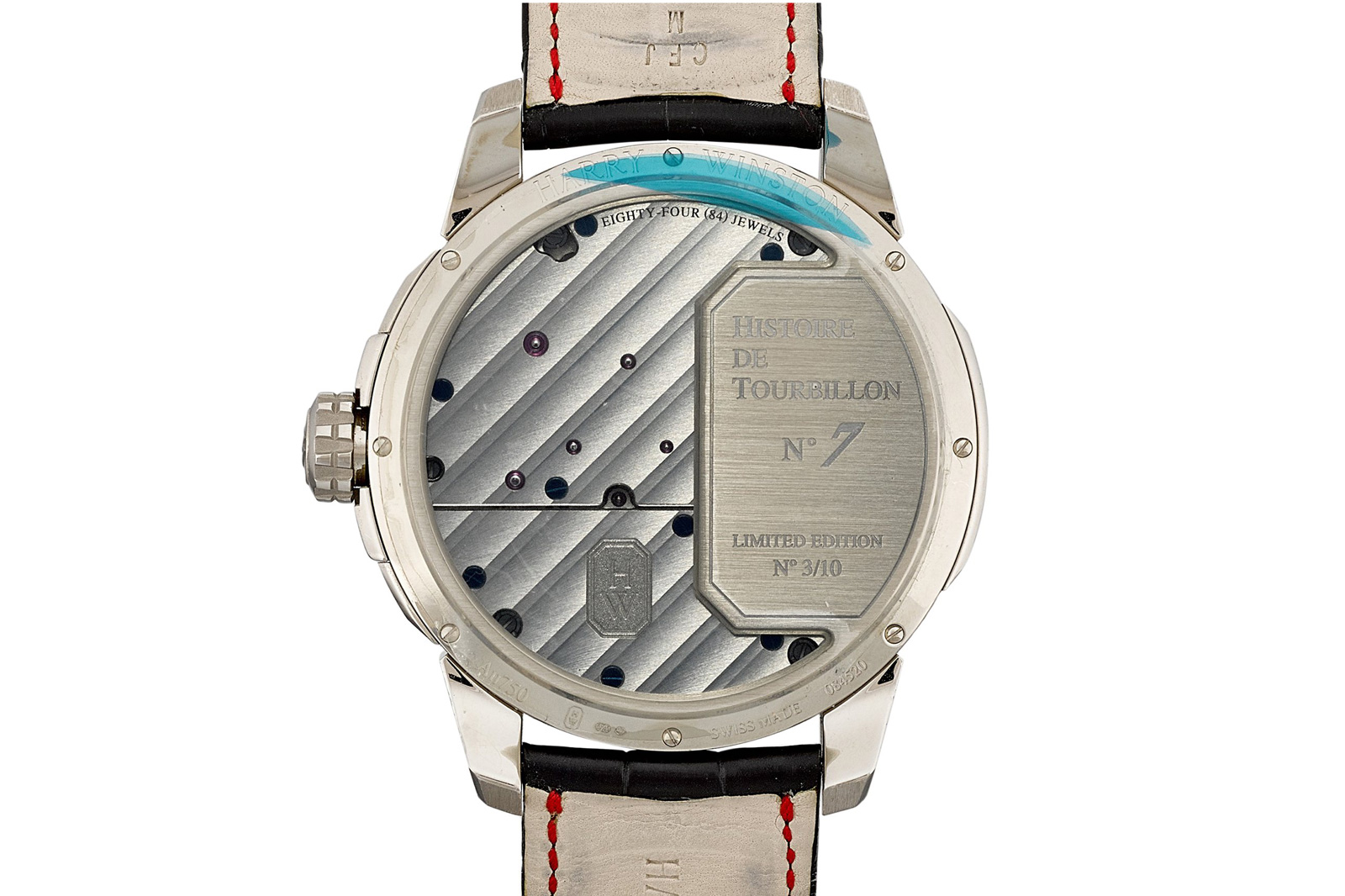 Like all Histoire de Tourbillons, this is a massive watch. he white gold case is almost 51 mm in diameter and over 17 mm high. But turn it over and you’ll see the movement fills up the case entirely, giving the size a technical basis.

Launched two two years after the lot above, the Histoire de Tourbillon 9 halves the number of tourbillons and instead goes with an extra-large, extra-complex tourbillon takes up the bottom half of the dial. The oversized tourbillon is explained by the fact that it’s actually a triple-axis tourbillon, which adds an additional layer of complexity to the regulating organ. Unlike many of the Histoire de Tourbillon models, this has an almost symmetrical design thanks to its twin retrograde displays for the hours and minutes that mirror each other on the upper half of the dial. On the left is the hour indicator, which is actually a jumping hour in addition to being a retrograde display, making it the only only Histoire de Tourbillon with a jumping display. Invented almost a century ago, the Atmos remains impressively clever today with its winding mechanism that is almost a perpetual motion machine. It relies on changes in ambient temperature to wind the mainspring, an ingenious invention that easily elevates the Atmos to the clockmaking hall of fame. 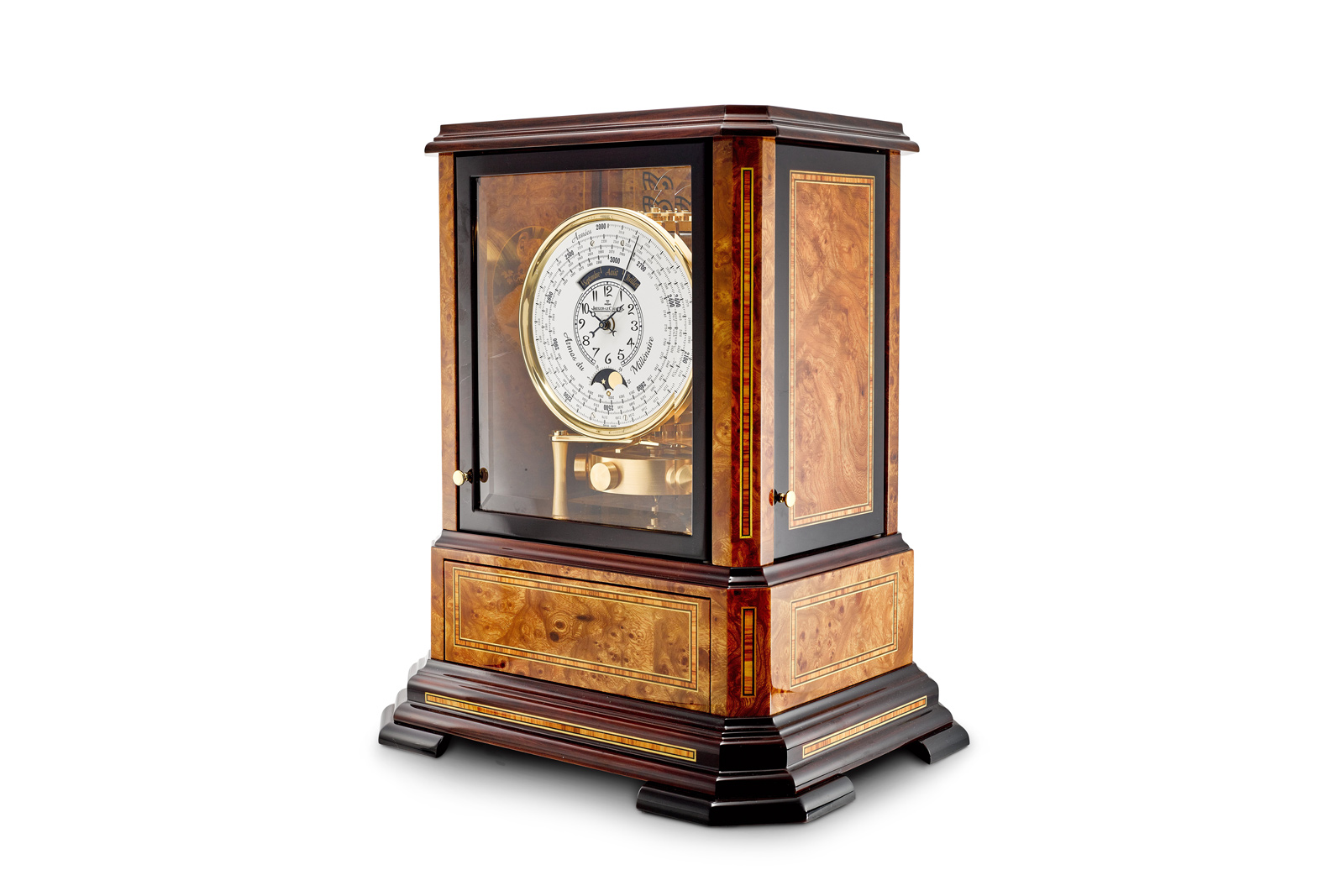 And this is example is certainly one of the grandest Atmos clocks ever made. It’s not just a time-only Atmos, but the Atmos du Millénaire – a thousand-year clock.

Made in 1999 to mark the turn of the millennium, the clock has an 1000-year perpetual calendar display. by comparison, most perpetual calendars in wristwatches are only accurate up to the year 2100 due to a quirk of the leap-year system. The Atmos du Millénaire, however, accounts for this quirk, so the calendar scale on the dial continues up to the year “3000”. The slim year pointer creeps forward so slowly that it requires 330 years to completes one revolution. 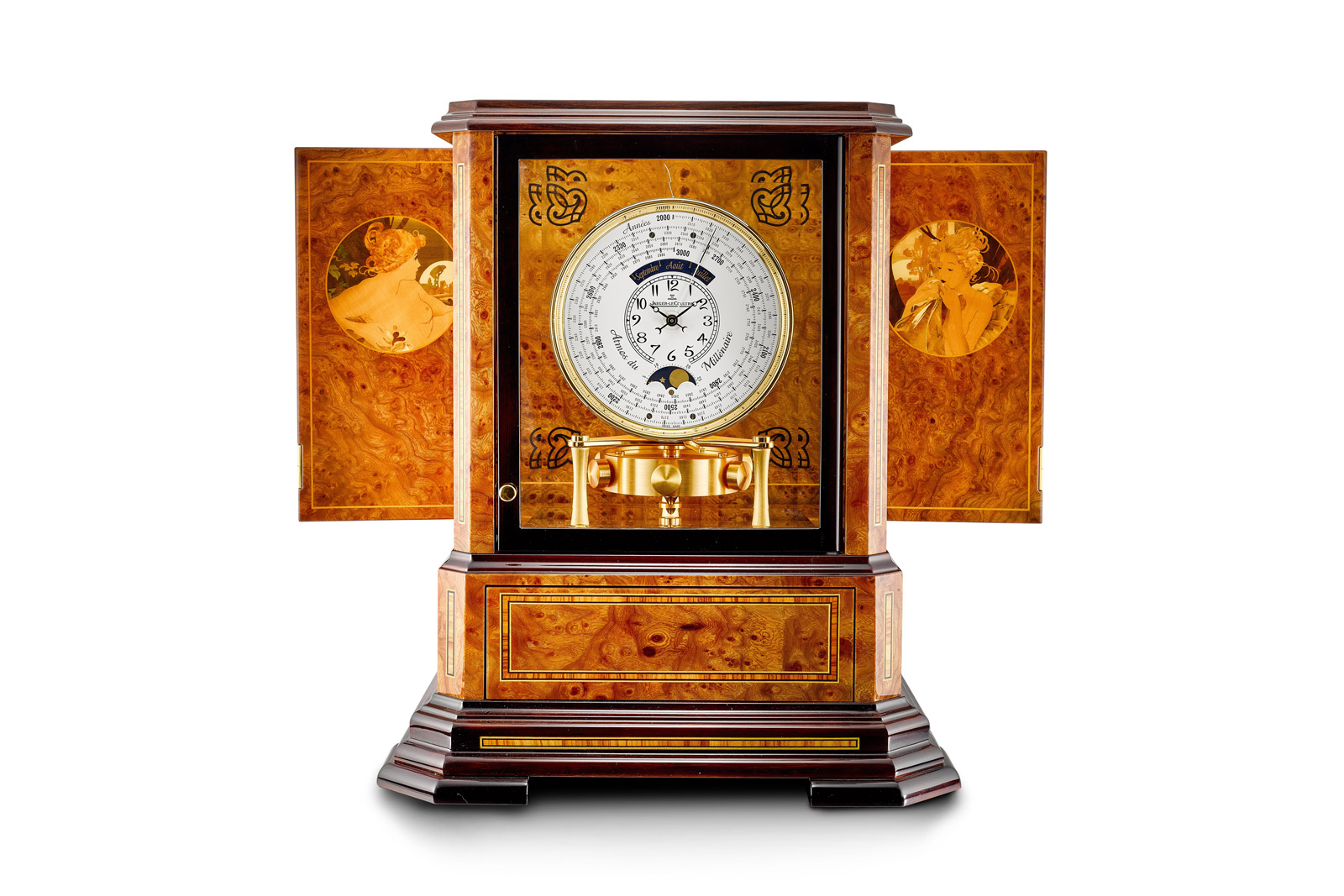 But the true art in the Atmos du Millénaire is in the cabinet that contains the clock mechanism. It’s housed in wooden cabinet panelled in a variety of exotic woods and inlaid with marquetry depicting Art Nouveau motifs inspired by the work of Alphonse Mucha. The Atmos du Millénaire is accompanied a suite of accessories, including two pens, as well as an ink stone and ink stick, along with ten parchments contained within gilt tubes. A tourbillon with a retrograde jumping hours, the movement has been constructed to create an orderly dial layout that gives the watch a clean and appealing look that is also surprisingly legible. The radial guilloche adds flair to the dial

Although it is clearly a modern watch, it evokes the precision regulator clocks made by German clockmakers like Riefler. The hours, minutes, and seconds are clearly indicated with hands on three separate axes, qualifying it as a regulator display, though the indicators are arranged horizontally instead of vertically as is traditional.

In another twist, the hours are indicated by a retrograde pointer that travels along the outer edge of the minute track, giving the dial a clean, functional appearance.

Turn the watch over and the back is the opposite of the dial. The three-quarter plate is fully engraved, by hand of course, with flowery curlicues, while the curved tourbillon bridge is black polished. 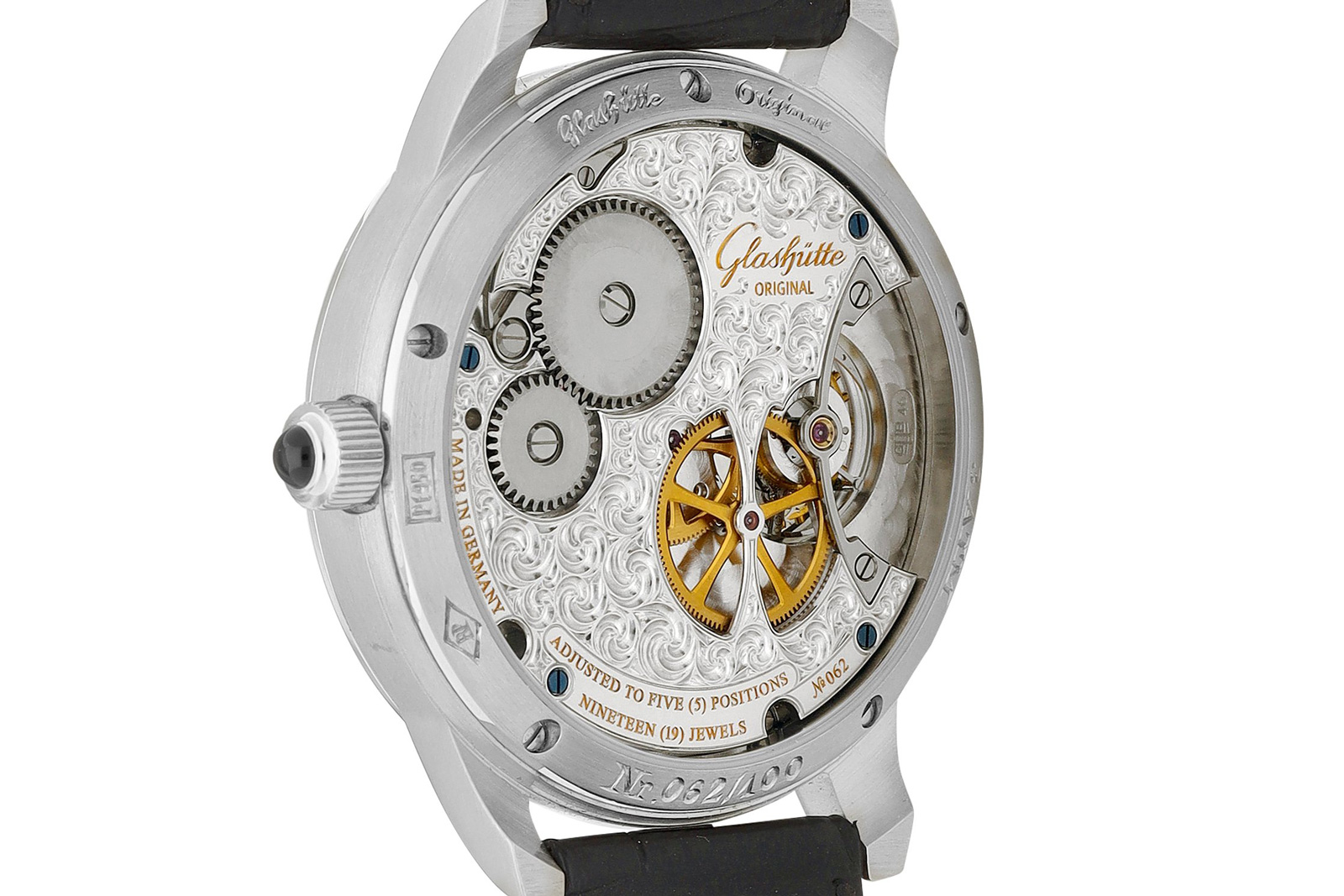 Though several multi-axis tourbillon have appeared in our selection, the Jaeger-LeCoultre (JLC) Gyrotourbillon 1 was a pioneer in this space, having come to market in 2004 – almost two decades ago now – well before most of the competition. Essentially bi-axis tourbillon with a three-dimensional spherical cage, the Gyrotourbillon was one of the first multi-axis tourbillon wristwatches and quickly became a signature complication for the brand. It has since been incorporated into even more complex movements, but this example is equipped with the original, first-generation Gyrotourbillon calibre. 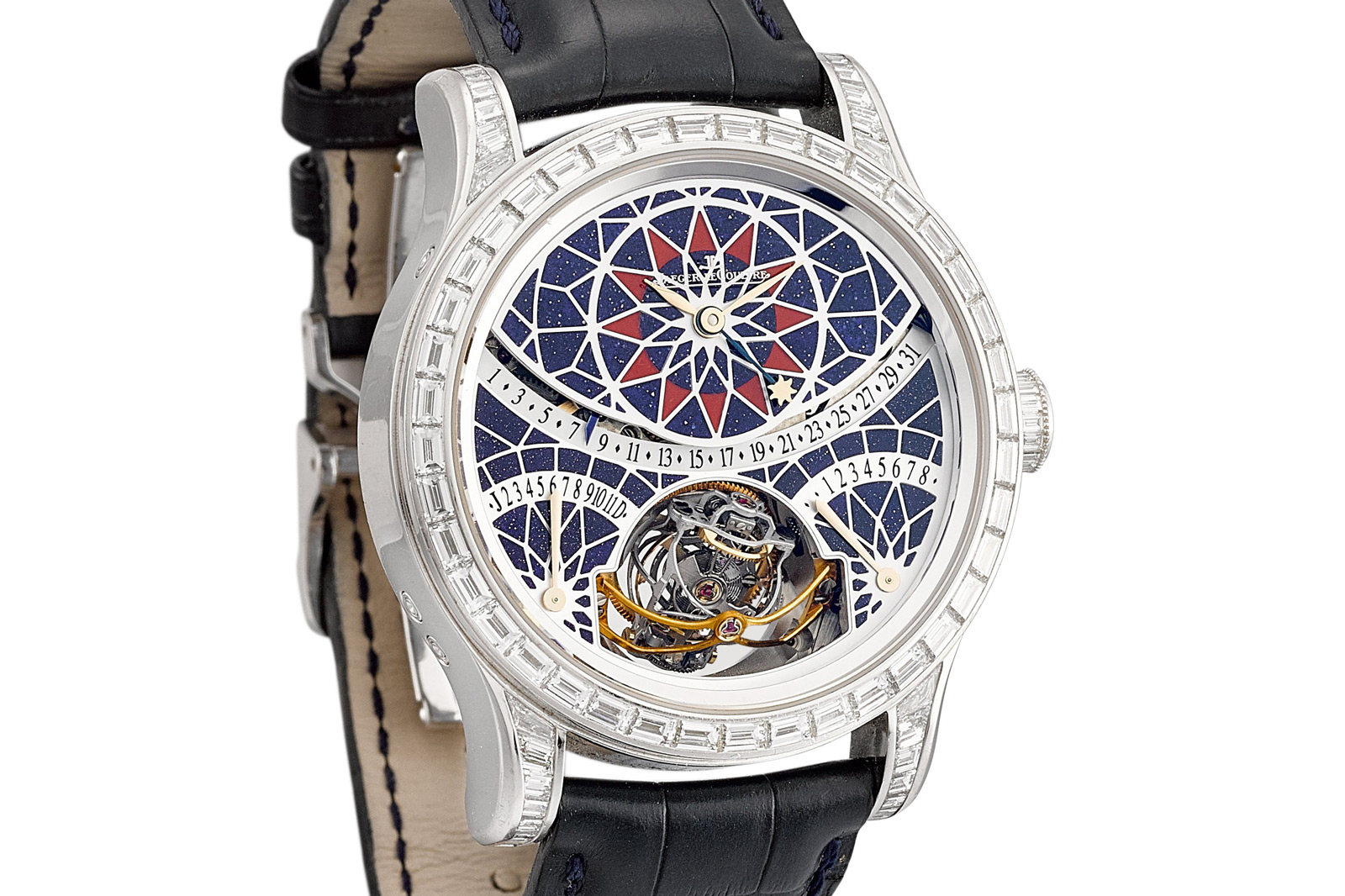 But the first-generation movement was hardly simply. It features a power reserve indicator, perpetual calendar, and equation of time, each indicated by a retrograde hand. On top of that, the calibre boasts a long running time of eight days. Originally introduced in platinum and then rose gold, the Gyrotourbillon 1 usually sported a clean grey dial, but the present example is not for the faint of heart. The dial is an aventurine-and-enamel mosaic, while the case is platinum set with baguette-cut diamonds on almost every front surface. Numbered “2/8”, the present example is one of the rarest iterations of the Gyrotourbillon 1 – and perhaps the most extravagant. It has an estimate of HK$1.2-1.8 million, or about US$152,900-229,300, a fraction of the original retail price (explained in part by the lack of the original box and papers).

Last but not least is the Ulysse Nardin Grand Deck Marine Tourbillon. It has a prominent flying tourbillon, but the rotating regulator isn’t the most intriguing complication in the watch. What makes it truly fascinating is the unique time display that takes inspiration from the rigging of a sailboat. While sailing-inspired watches are many, few manage to truly capture the look and feel of a ship as literally as the Grand Deck. Seeming like an ordinary retrograde display at a glance, the minute hand is actually secured by slender cables that run across the entire dial. The cables form part of a pulley system that facilitates the progress and release of the retrograde hand, functioning in a manner that evokes the boom of a sailboat. While it might be mistaken for a big date, the window at 12 o’clock is a digital jumping hours that’s extremely large and legible, while preserving the symmetry of the dial. As the minutes hand swings back to “0” the top of each hour, the double-digit hour display advances with a crisp click to show the current hour. Taking the nautical theme further is the dial itself, which is actually an example of artisanal decoration. It’s inlaid with wood marquetry made up of narrow strips of wood arranged in a linear fashion to mimic the teak deck of a ship. Numbered “3” in the 18-piece limited edition, the Grand Deck in white gold has an estimate of HK$900,000-1.2 million, or about US$114,700-152,900. With even the high estimate being half of the original retail price, the Grand Deck is potentially a value buy as far as exotic complications go.

All lots will be on show during the preview exhibition in Hong Kong during the run-up to the auction. Both take place at the Hong Kong Convention and Exhibition Centre (New Wing). Taking place from October 16-30, Into the Wild Experience is an exhibition dedicated to the Cartier’s Panthère, the all-encompassing line of timepieces, jewellery, and accessories for both men and women. Covering almost 6,000 square feet across eight rooms, the exhibition explores the origin of the line and showcases its diversity. Named after the big cat now synonymous with the jeweller, Panthère made its debut in 1914 with a ladies’ wristwatch covered in diamonds and onyx spots resembling a jaguar’s fur. The animal has since inspired a remarkable range of objects ranging from rings to watches, many of which will be on displaying during the event. Into the Wild Experience takes place from October 16-30, 2022 at Bayfront Pavilion, Gardens by the Bay. The event is open to the public, but registration is required to attend. For more, visit Intothewild.cartier.sg.