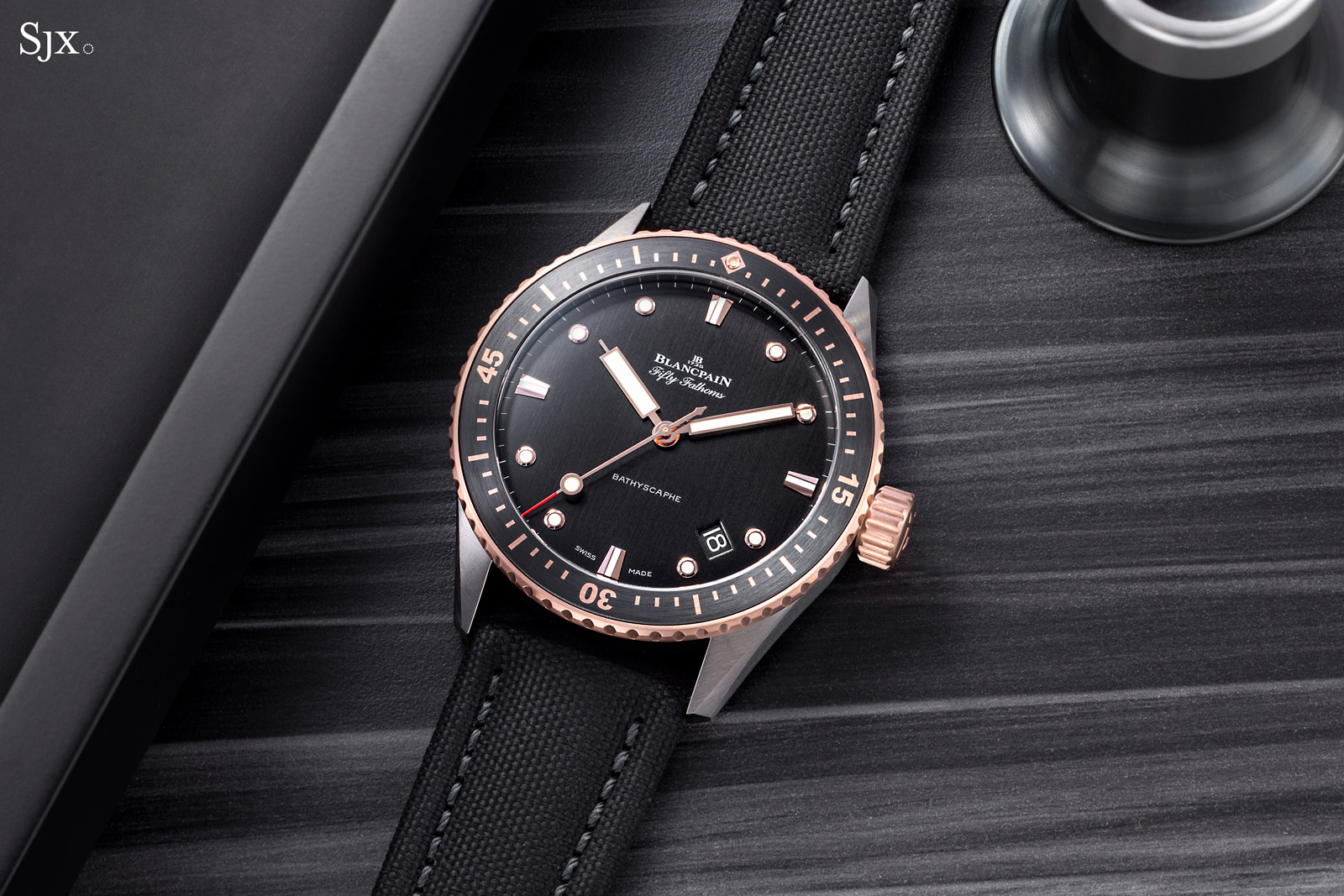 Created for the 50th anniversary of Cortina Watch, which is also marking the occasion with a special Patek Philippe Calatrava, the Fifty Fathoms Bathyscaphe Cortina Watch 50th Anniversary is an elegantly different take on Blancpain’s vintage-inspired dive watch. With a titanium case matched with a bezel and crown in fade-resistant Sedna gold, the Cortina edition dresses up the functional style of the ordinarily no-frills Bathyscaphe.

Originally launched in 2013 as the entry-level – and most compact – model in the Fifty Fathoms collection, the Bathyscaphe was previously only available in single materials, making this two-tone version a first. In fact, the Bathyscaphe Cortina the first Blancpain dive watch with a bi-metal case, but it’ll probably not be the last since the combination is appealing. 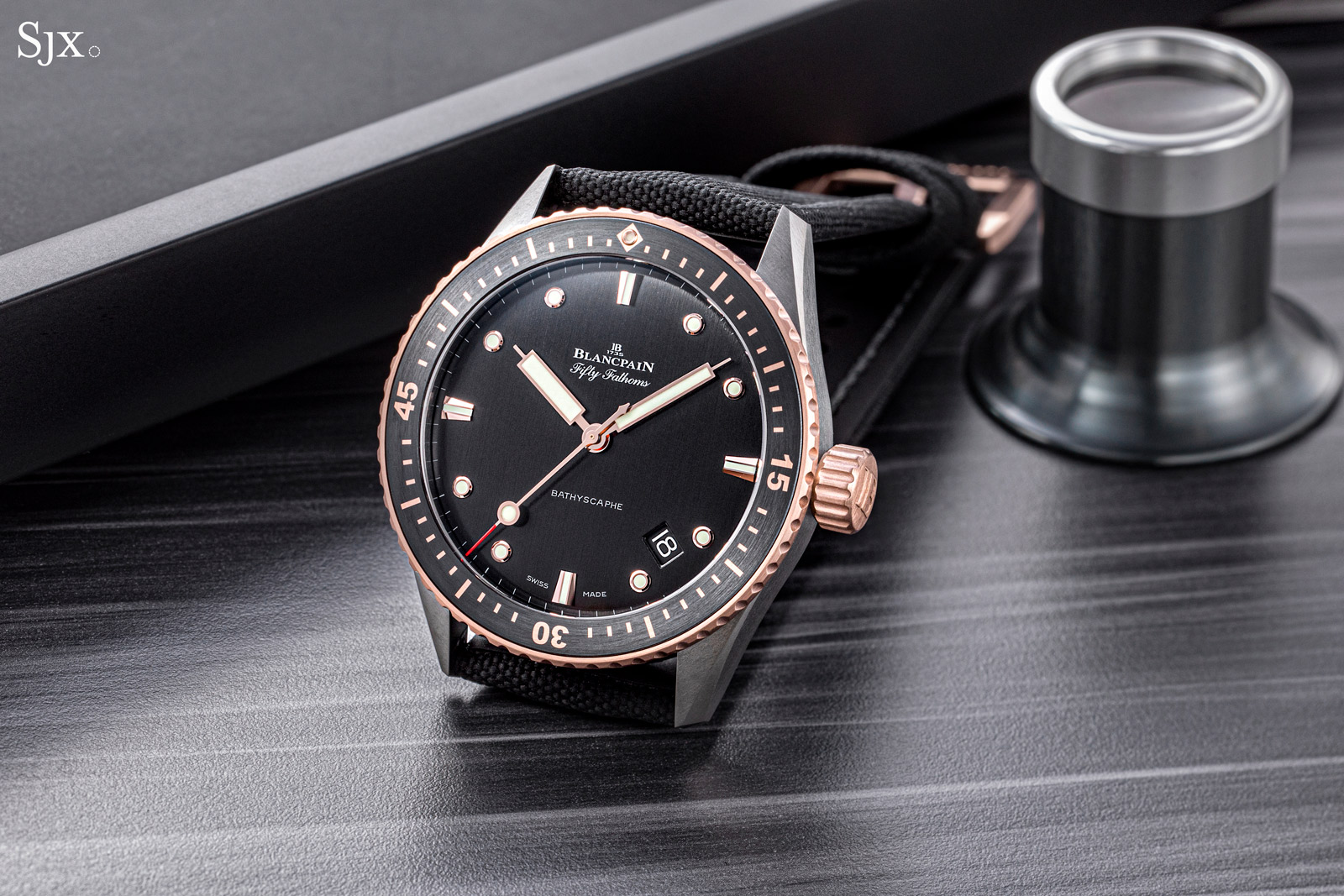 The hands and hour indices are also 18k Sedna gold

The Bathyscaphe is a handsome watch that has good proportions. It doesn’t feel as large as it measures and wears well. And it is especially lightweight in titanium, so it sits easily on the wrist.

In its original variants the Bathyscaphe is muted (in either the steel, ceramic, or titanium versions), or expensive and shiny (in Sedna gold). The Cortina edition is a useful variation on the theme that’s still restrained, but with a little bit of shine. 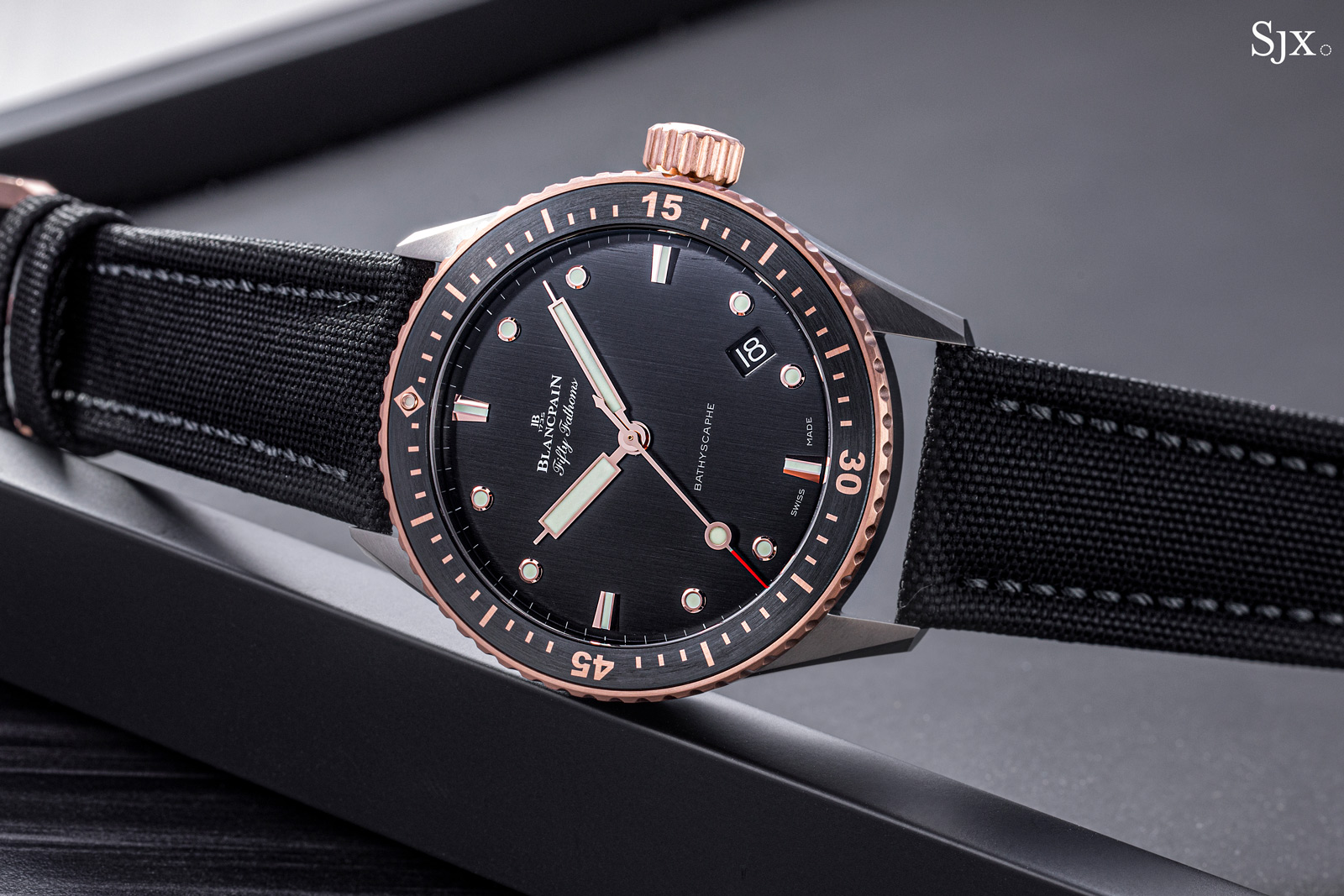 The Sedna gold accents work especially well on the watch because of its retro style. They bring to mind vintage dive watches with “gilt” dials.

Admittedly, however, the retro design is a stereotypical dive watch. Even though the Bathyscaphe is modelled on a vintage Blancpain diver of the same name, the original was fairly generic and typical of the scuba diver’s watches of its period. Still, the Bathyscaphe is an attractive design that’s recognisable as a Blancpain, and here it’s been made even better with the gold accents. 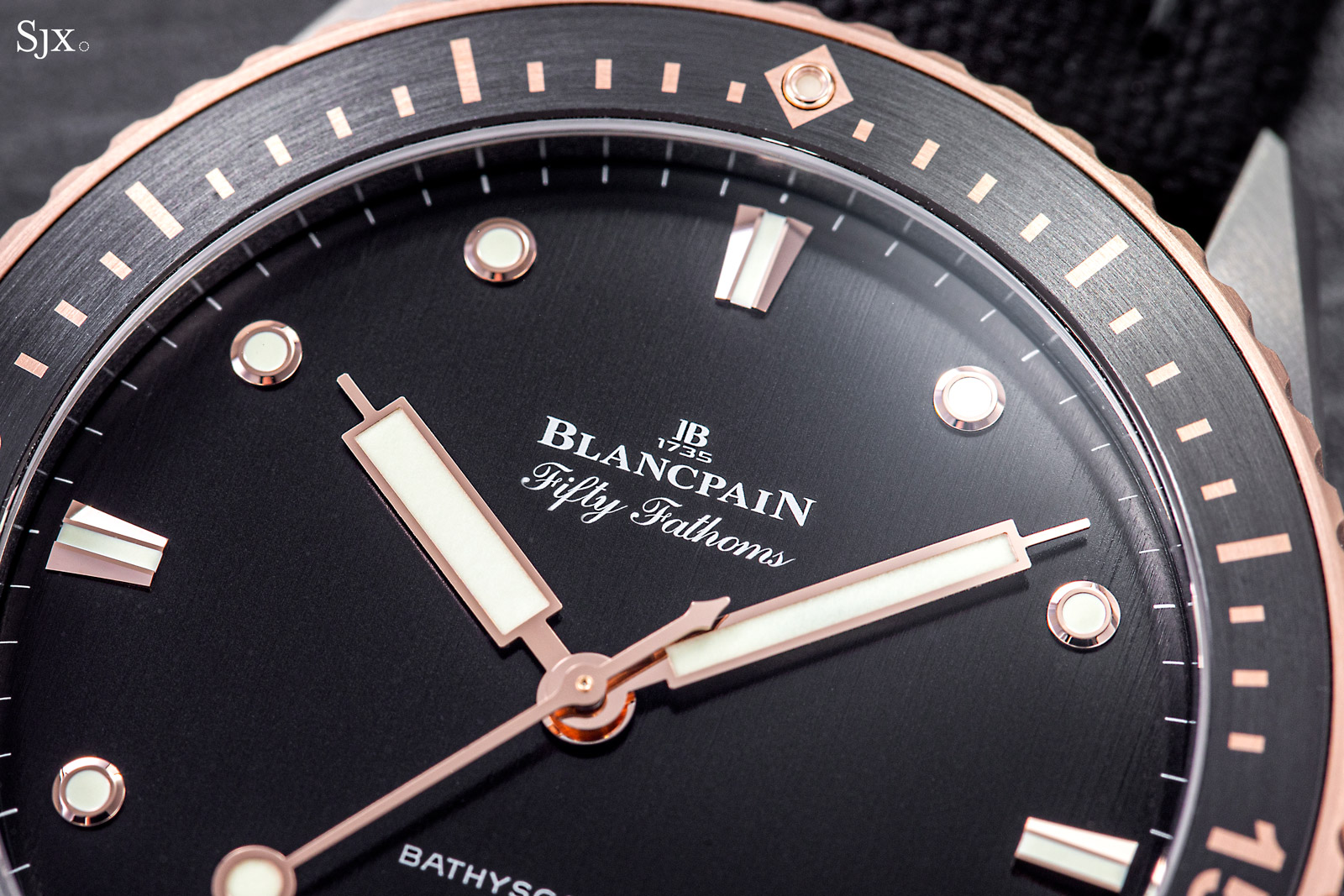 As expected of Blancpain, the Bathyscaphe Cortina is excellent in both fit and finish. The case is precisely milled and finely finished, while the movement is high spec – it has an impressive five-day power reserve – and decorated well. Every element of the watch is executed as well as it should be for the price, with some aspects even better than expected. 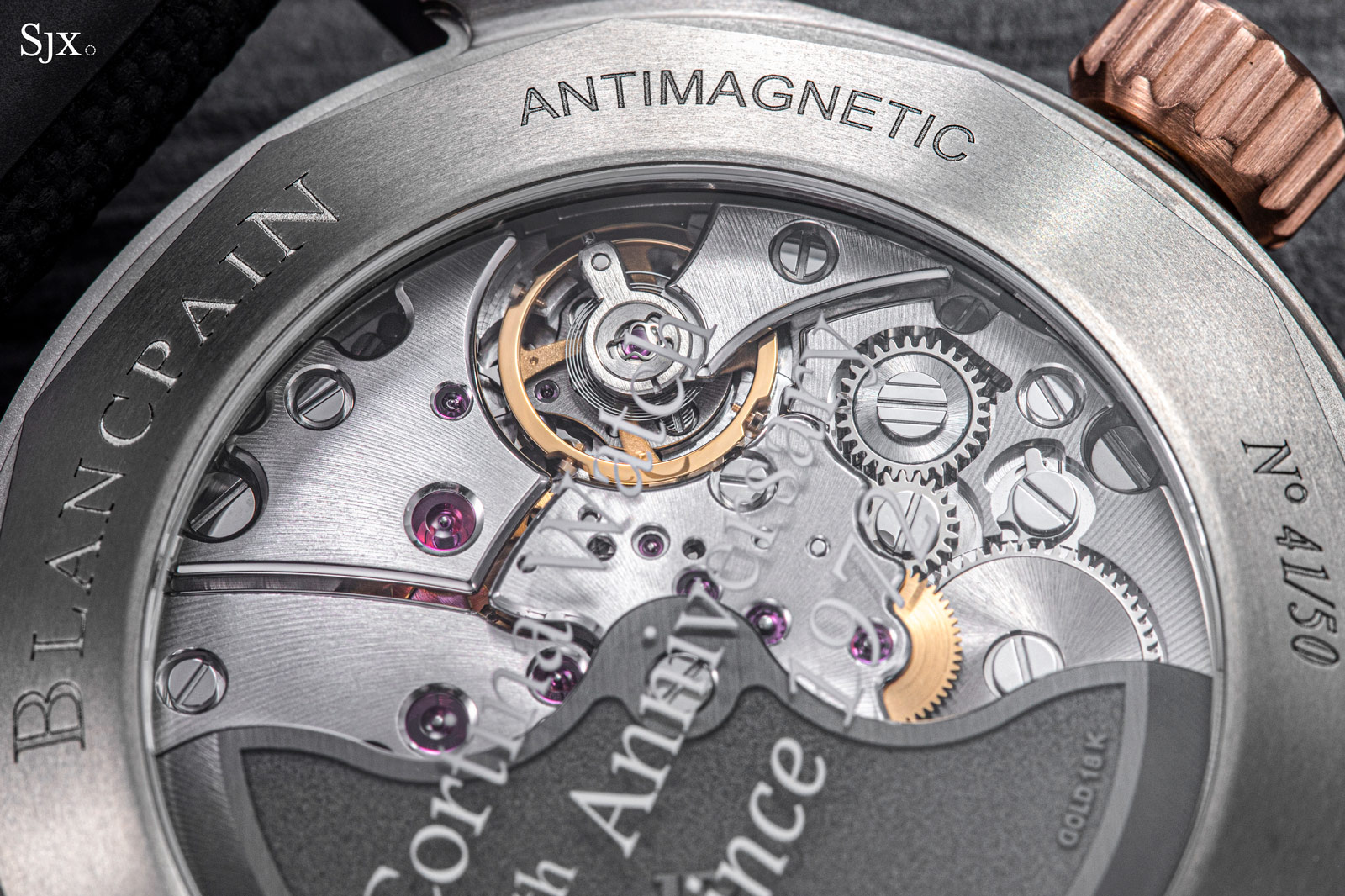 The watch does have a few niggles that I would have done without. One is the glossy finish on the dial instead of matte, and another is the anniversary text printed on the case back that gets in the way of the view. At the same time, I would have preferred a bracelet as standard, instead of the canvas strap.

But overall the Bathyscaphe Cortina is an appealing watch that’s surprisingly well priced considering the materials and quality. Compared to other recent dive watches in the same price range, like the Panerai Radiomir Bronzo, it is strong value. At 43 mm in diameter and 13.4 mm high, the Bathyscaphe is a largish watch but surprisingly feels smaller than it is. The dimensions are pretty much ideal for that it is. Compared to the Fifty Fathoms ref. 5015 that’s 45 mm by 15.4 mm, the Bathyscaphe is positively compact.

The case middle and back are titanium, while the rotating bezel and crown are Sedna gold. That’s just enough gold for it to stand out, but not so much that it’s excessive. From across the room this still looks like a low-key, functional watch. 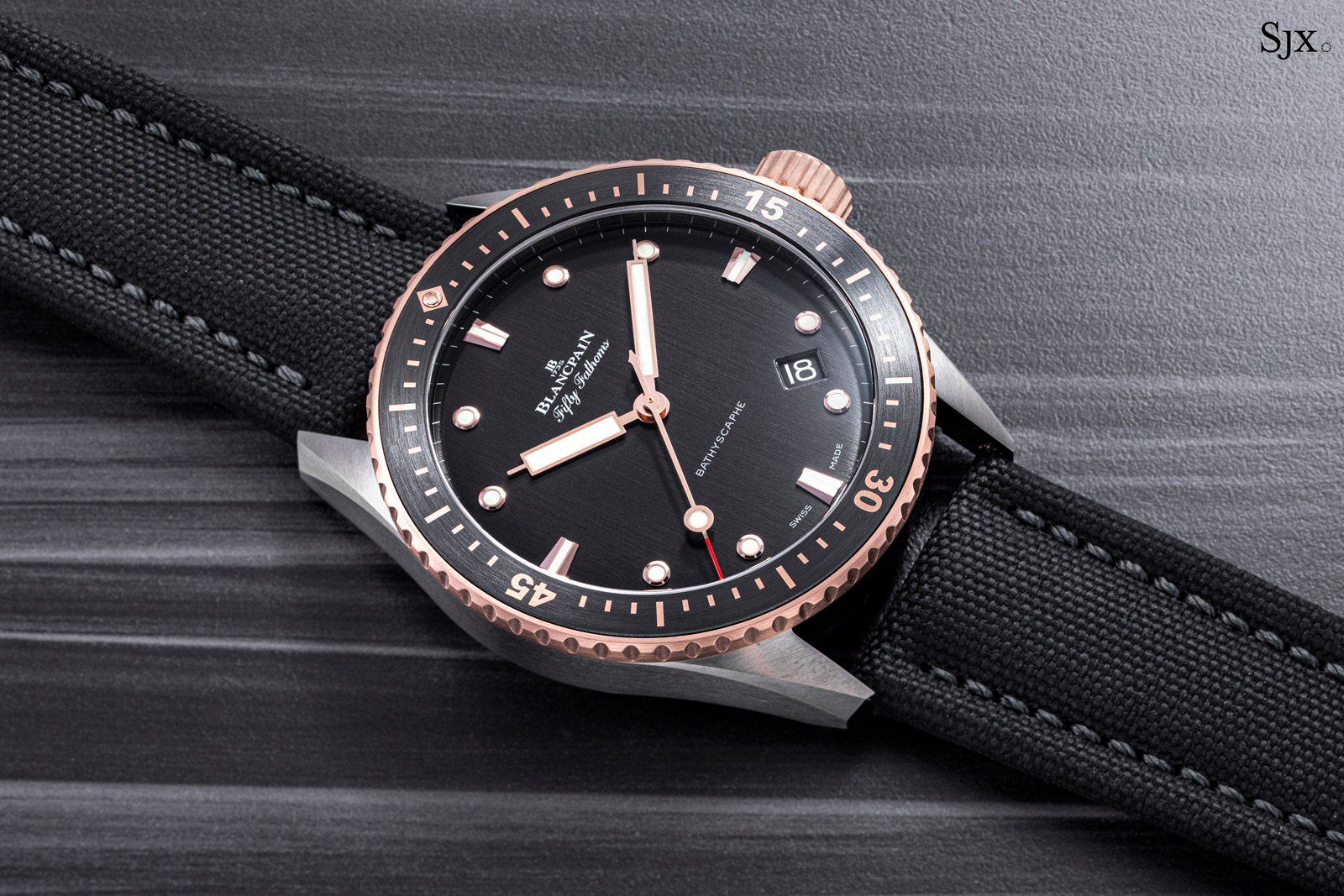 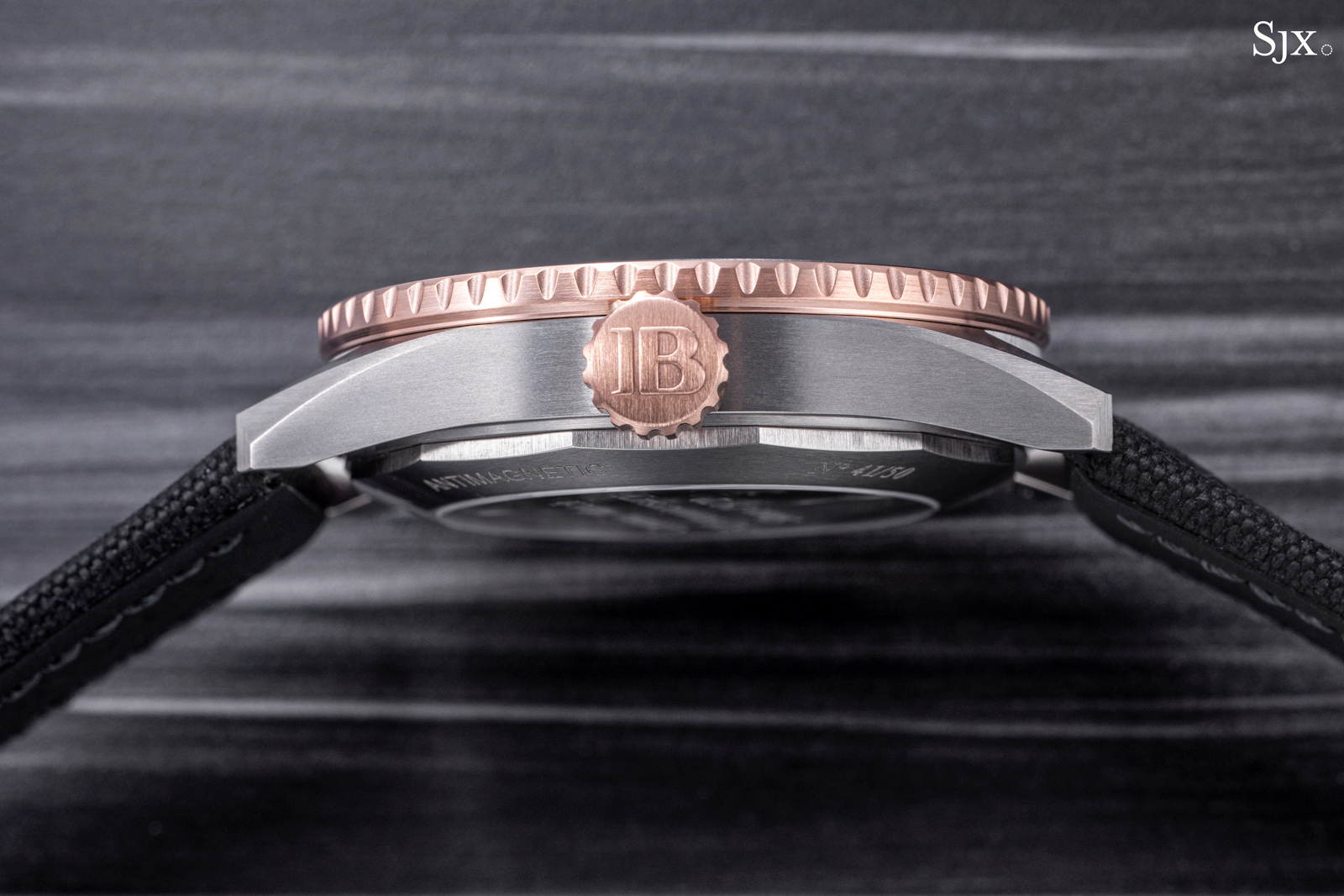 While the Bathyscaphe does have the generic look of a dive watch with a rotating bezel, it is distinguished by its materials and finish.

As is typical with many of the brands owned by Swatch Group, Blancpain pays attention to materials. And so it is with the Bathyscaphe, which uses Ti23 for the case. The most widely used titanium alloy for watch cases is Grade 5, or Ti-6Al-4V.

Ti23, also known as Ti-6Al-4V ELI, is a variant of Grade 5 with a slightly different composition of “Extra Low Interstitials”, hence the “ELI” suffix. This means Ti23 has less oxygen and iron, resulting in improved biocompatibility, toughness, and strength. The tangible benefits of using Ti23 in a watch case are probably nil, but the esoteric alloy is still a point of appeal and illustrates Blancpain’s devotion to materials science (as well as that of its parent). 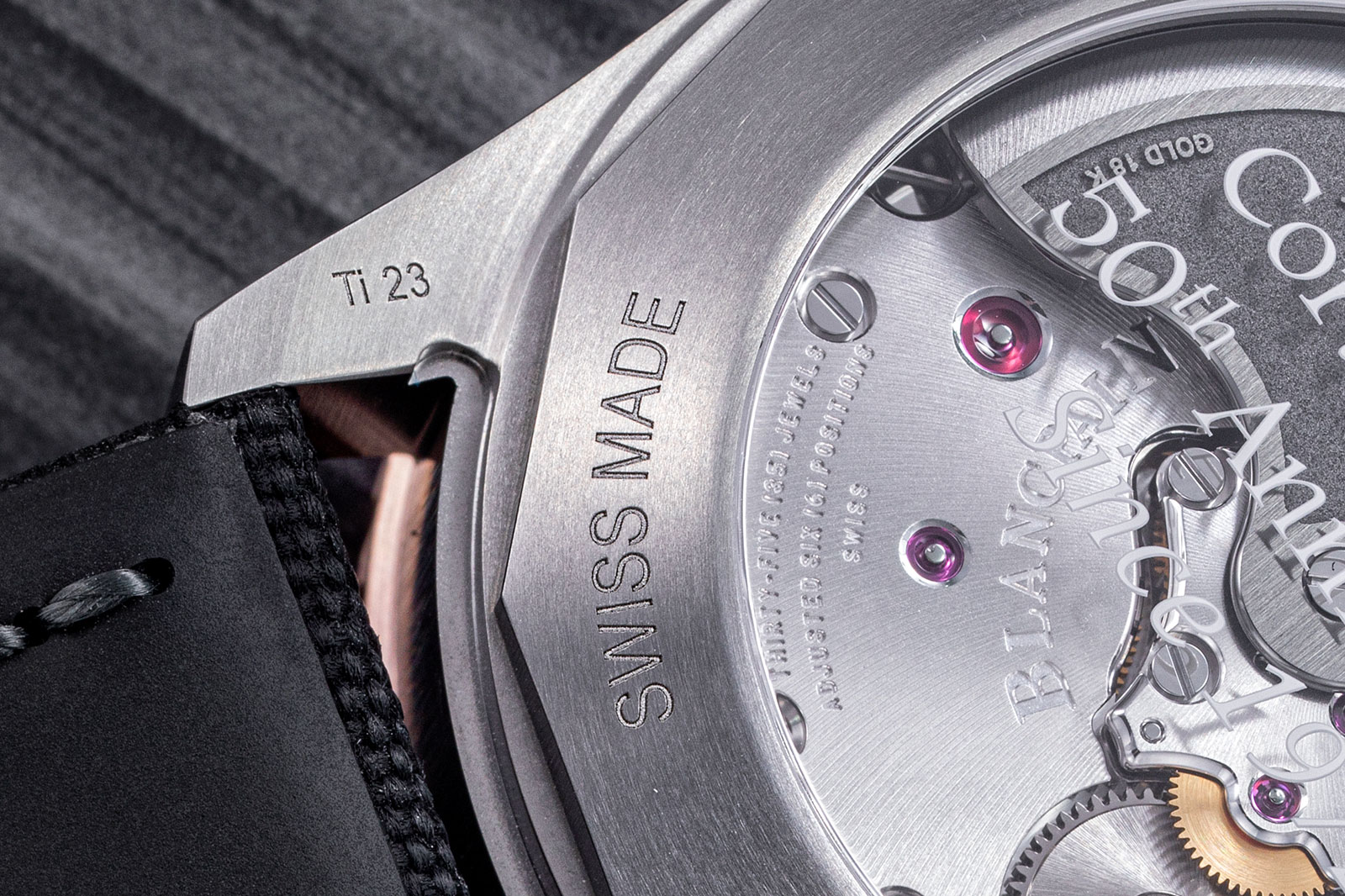 Similarly, the gold accents are not merely ordinarily red gold, but instead Sedna gold. Fade resistant due to the addition of palladium, the proprietary alloy will retain its coppery tinge unlike conventional red gold that dulls over time due to chlorine in the air.

The alloy is mostly associated with Omega, which debuted the metal and uses it extensively across its offerings. Being part of the same group, Blancpain has used the metal for a few of its dive watches, where the alloy’s fade-resistant properties presumably become most useful since such watches will probably spend time in swimming pools. 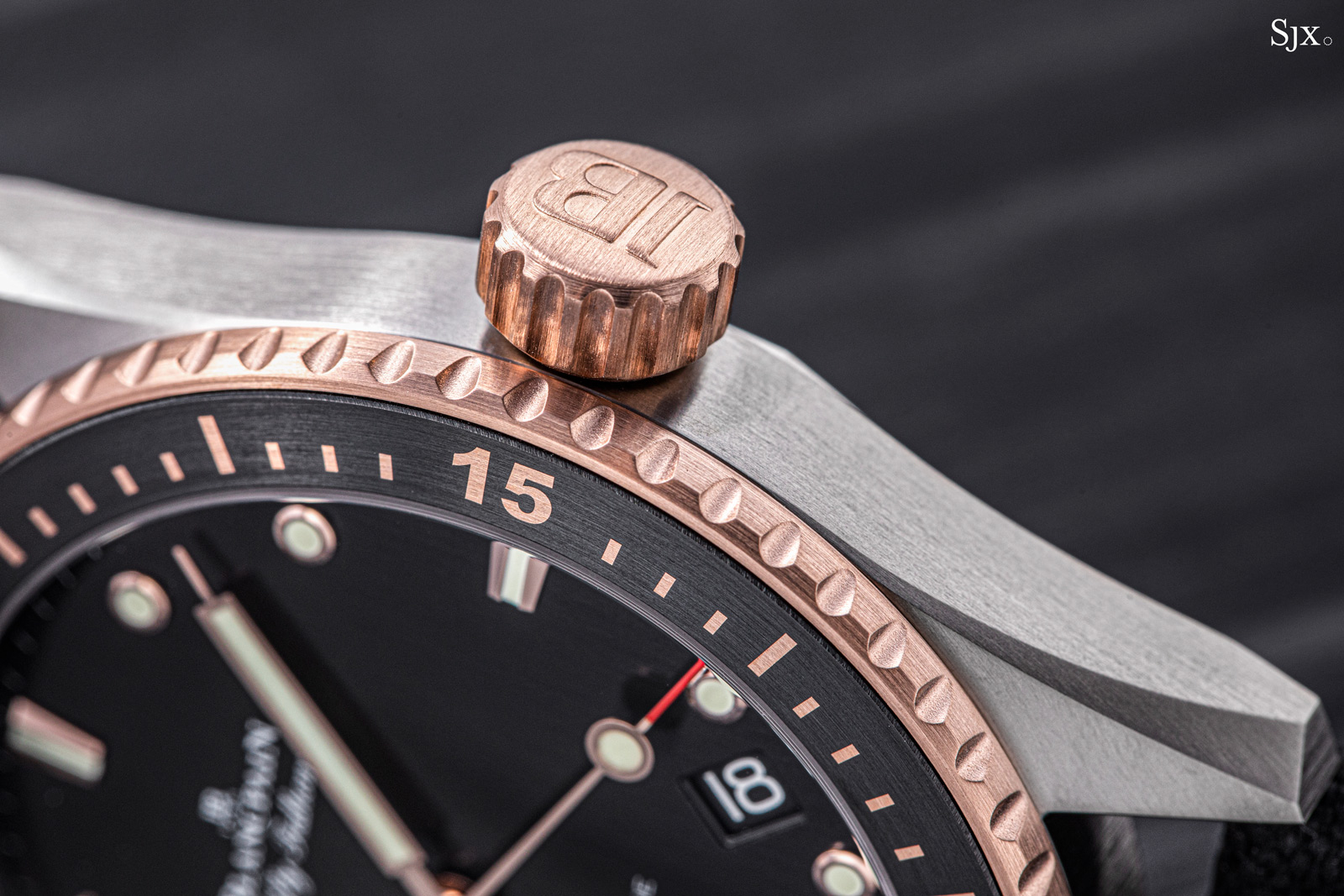 Besides the materials, the case also excels in terms of finishing. The edges and lines are precisely milled and neatly finished to a high standard, a quality of work that is most evident on the ends of the lugs and the ceramic bezel.

Unsurprisingly, the bezel is another example of technology synonymous with Omega. The bezel insert is Ceragold, essentially a ceramic disc with its engraved markings inlaid with 18k Sedna gold then polished so that the gold inlay is flush with the surface. The surface of the bezel is so perfectly finished it is entirely seamless. 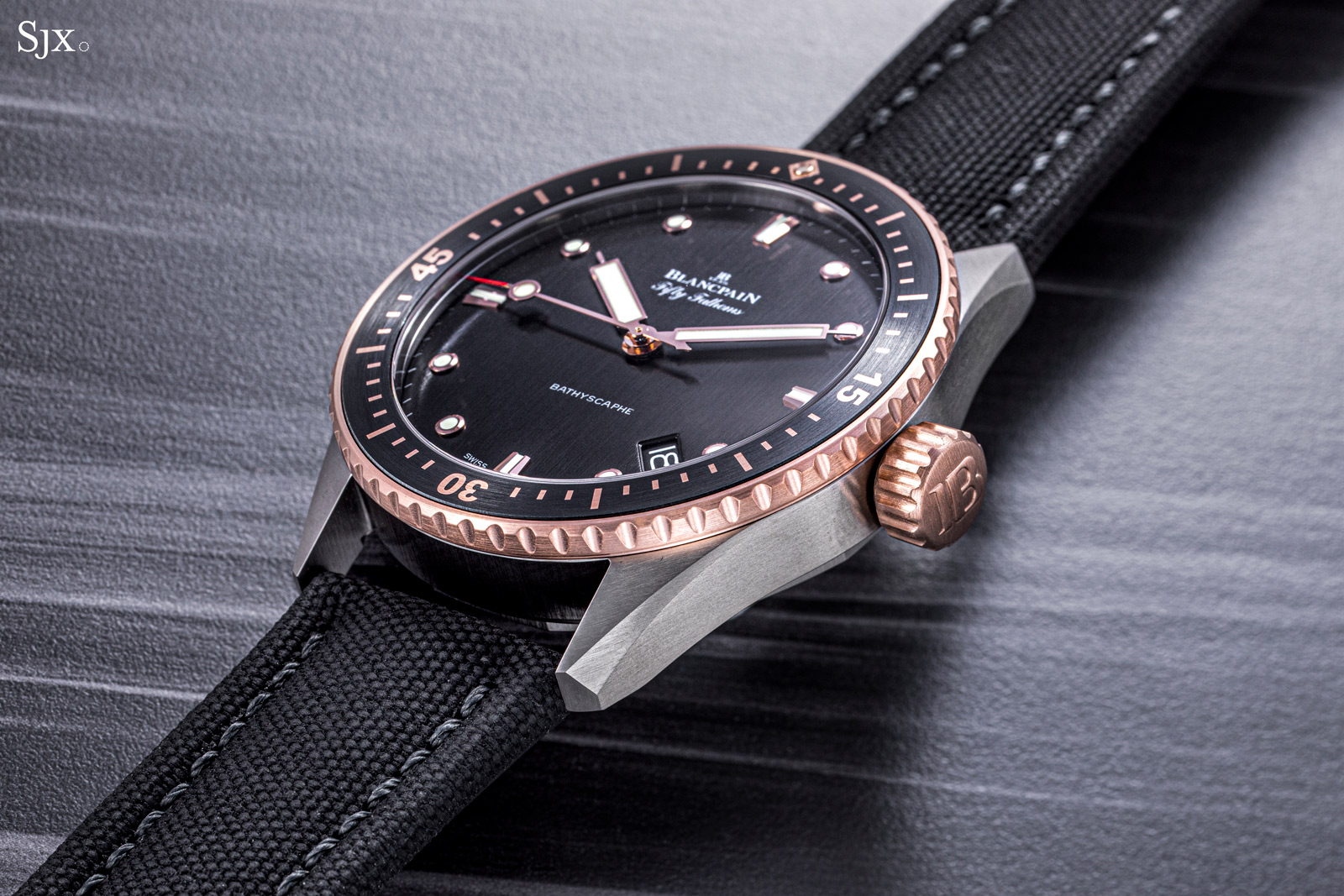 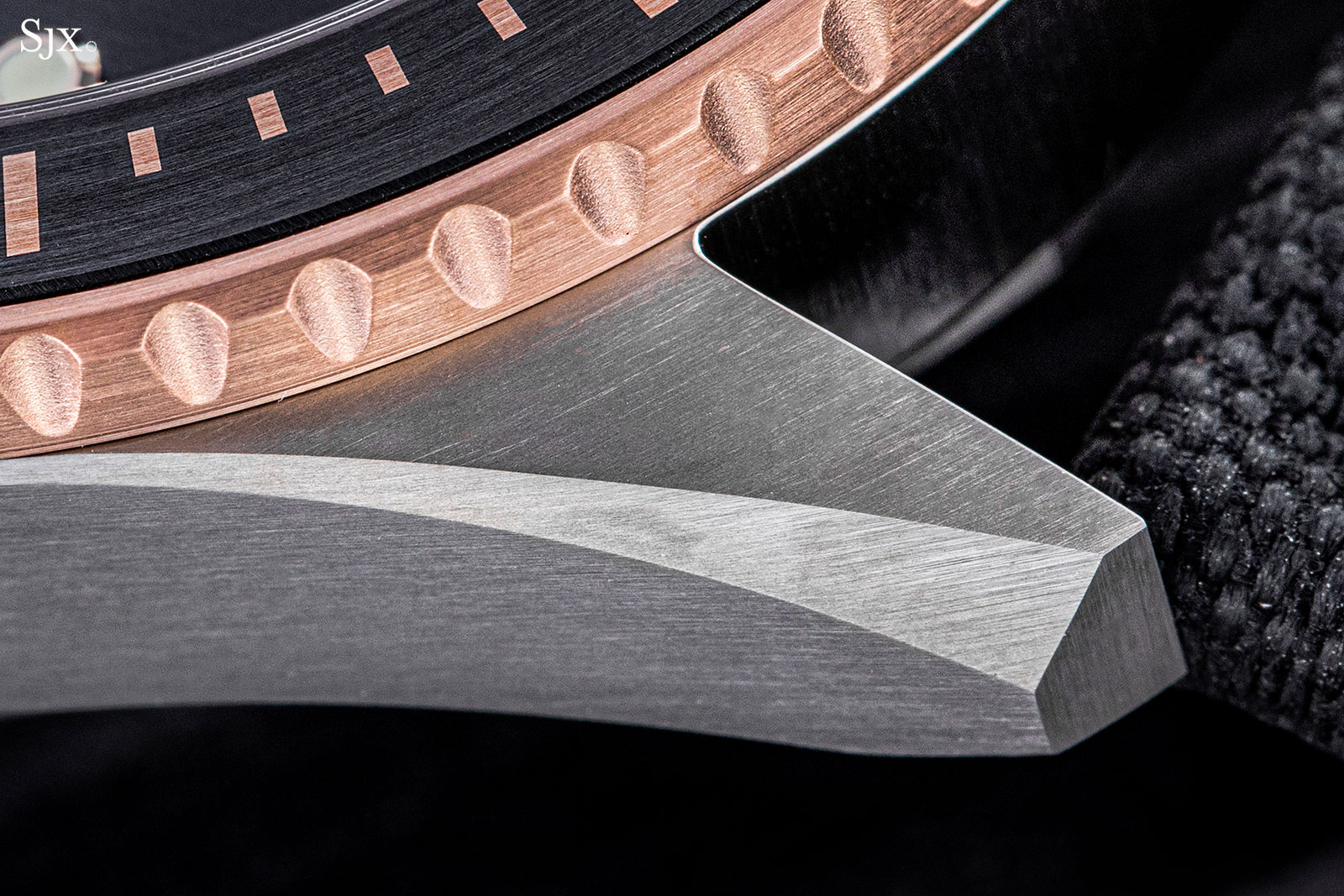 The Bathyscaphe Cortina is sold on a canvas strap with a Sedna gold buckle. A matching all-titanium bracelet is available, but only as an add-on purchase. I would have much preferred the bracelet as standard since it completes the package, both in terms of aesthetics and utility. Also, the compact size of the Bathyscaphe means the addition of a bracelet doesn’t feel like too much metal.

Considering the pin buckle is 18k Sedna gold, I assume doing away with the buckle would have helped amortise the cost of an all-titanium bracelet. On the other hand, a titanium bracelet costs an extra US$2,500 or so on the standard model, so I expect it will cost about US$3,000 to buy separately. That’s a hefty sum but the Bathyscaphe bracelet is solidly constructed and is probably worth the stretch for most. 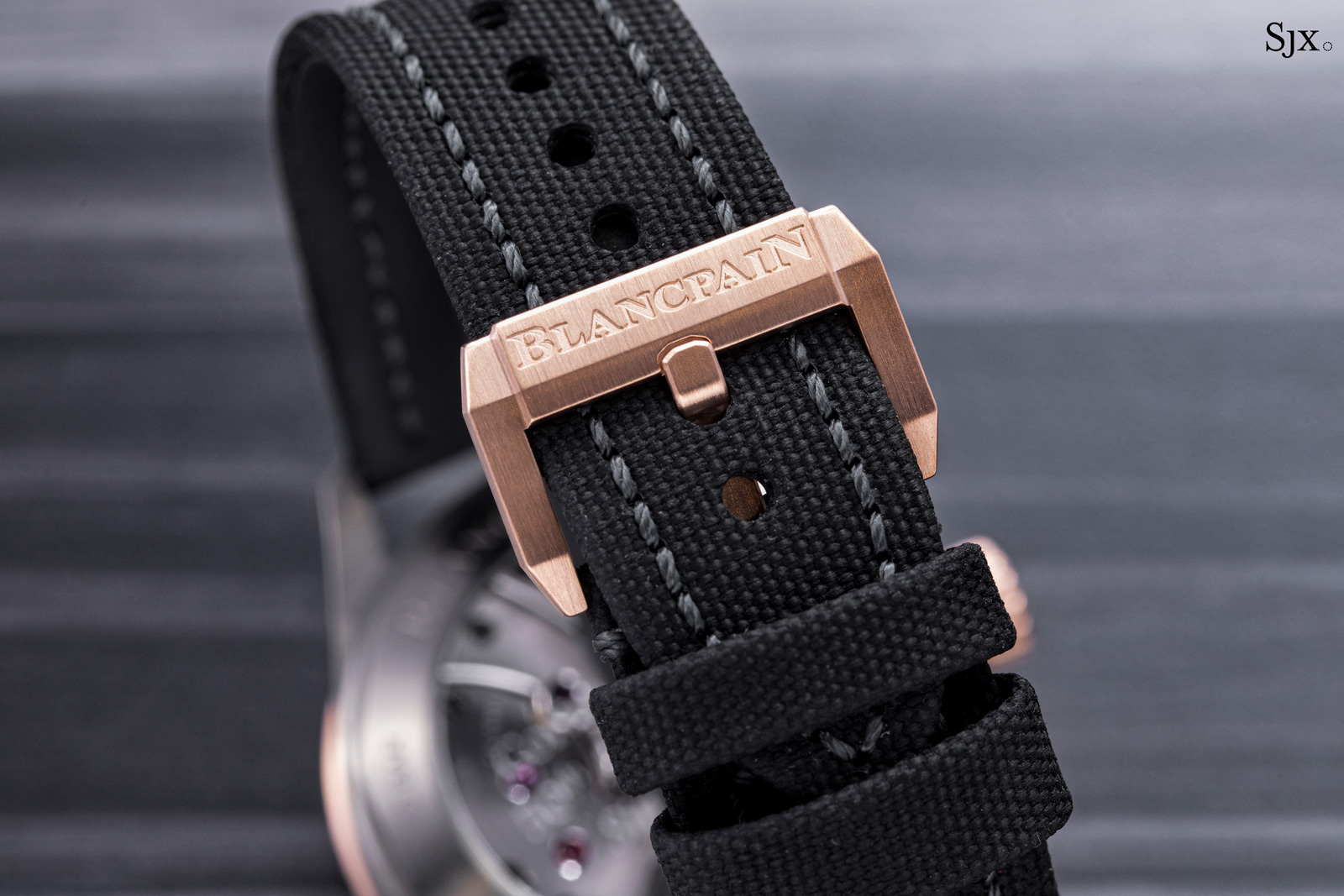 Sedna gold comes courtesy of Omega, explaining the twin brand hallmarks on the back of the buckle

The vertically brushed finish is pronounced, making it apparent even at arm’s length. It gives the dial a slightly industrial aesthetic that suits the style and purpose. 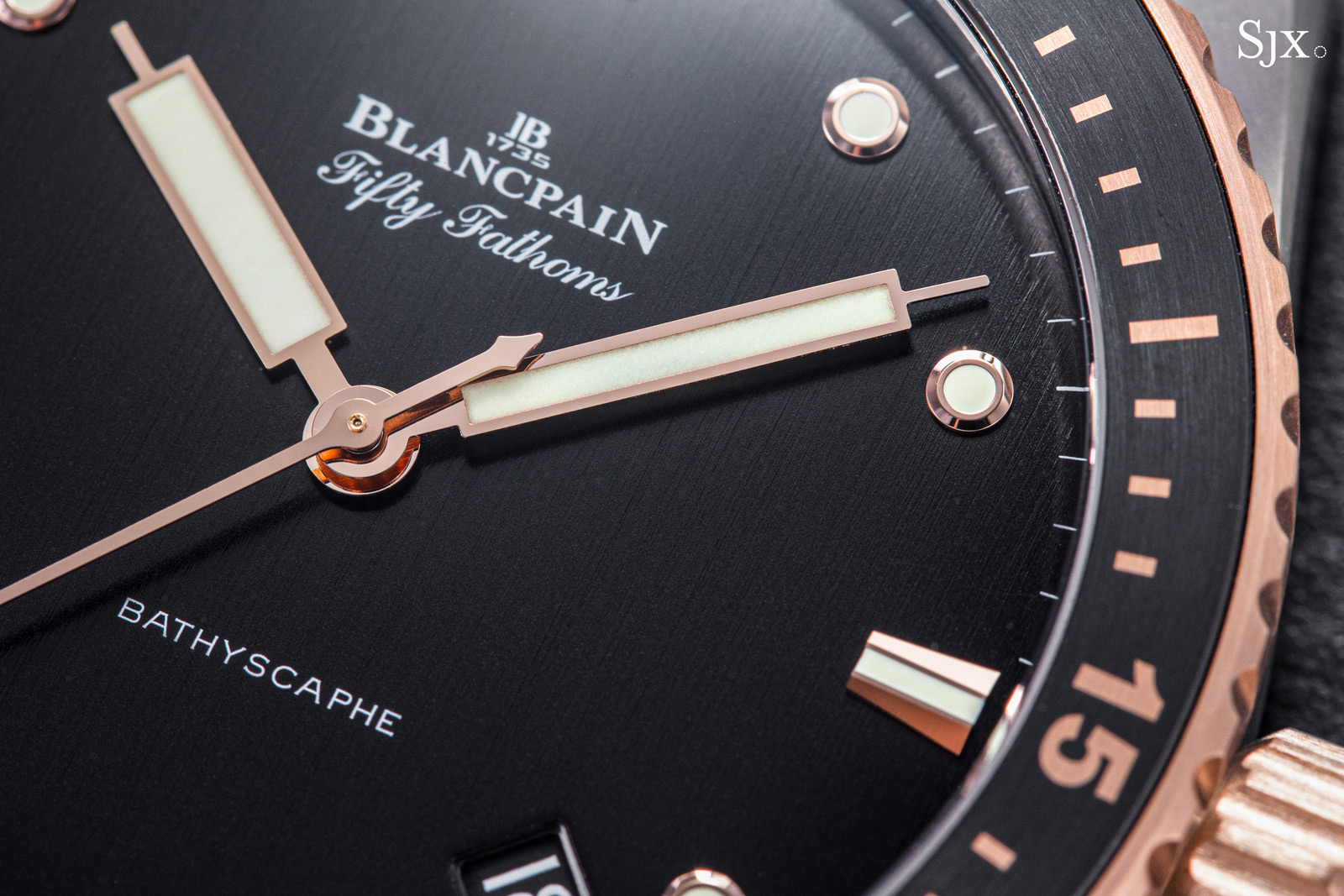 However, the dial also has a glossy finish that doesn’t quite go with the style. A flat, matte black would have complemented the vertical brushing much better.

In fact, the black dial seems slightly shinier than the brushed grey dial on the titanium model. If that was intentional then it was a misstep, but it might just be a consequence of the different colour. But the key point of difference on the dial are the hands and applied hour markers in 18k Sedna gold – these look good. The gold bits are striking, but also improve legibility due to their stark contrast against the black dial. 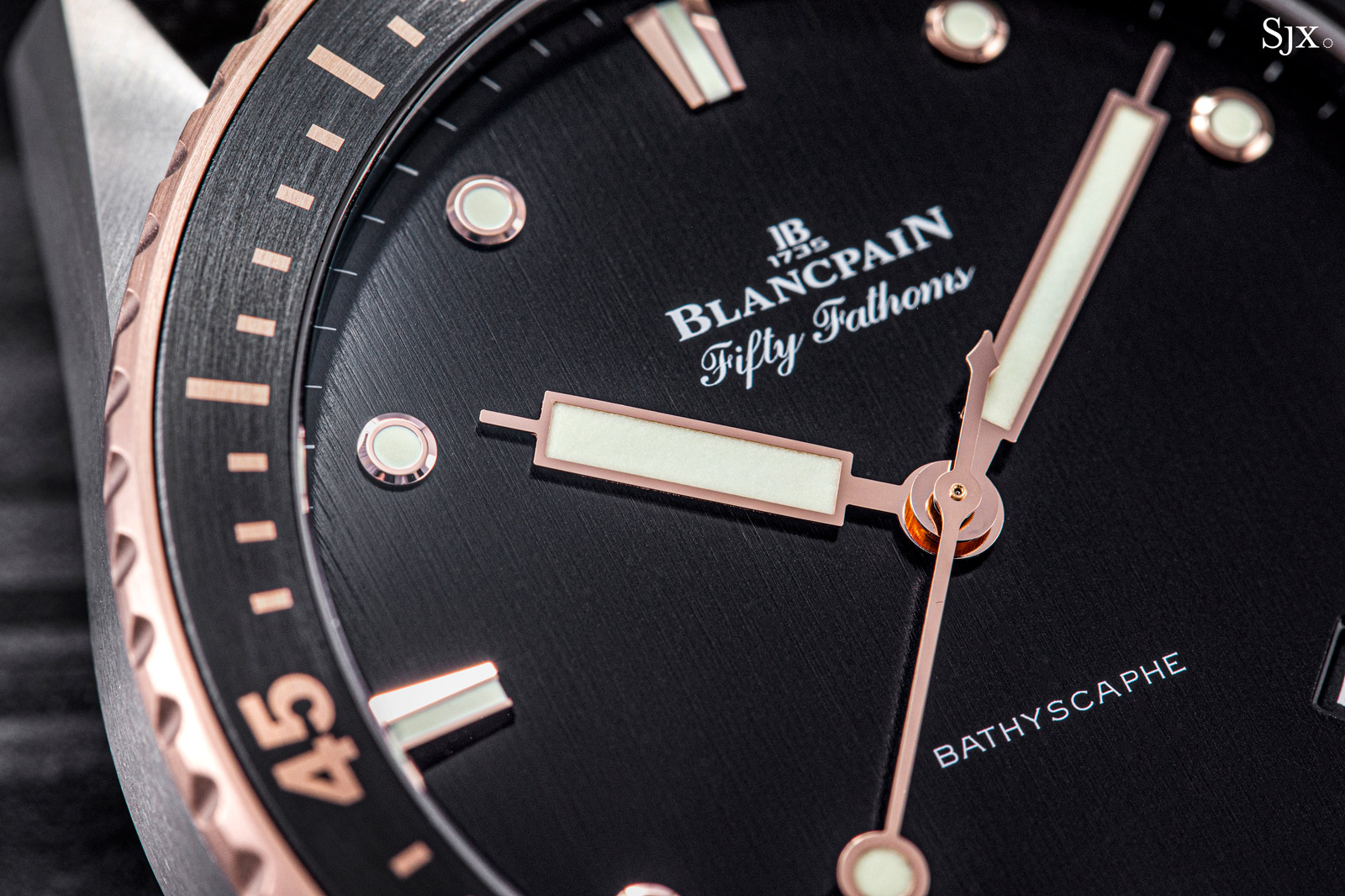 And then there’s perennial point of controversy on vintage-inspired dive watches – should a date be included? Here it sits between four and five but not quite at the edge of the dial, leaving it looking a little awkward.

Fortunately the date disc is black so it doesn’t stand out too much but the design would still be better without it. 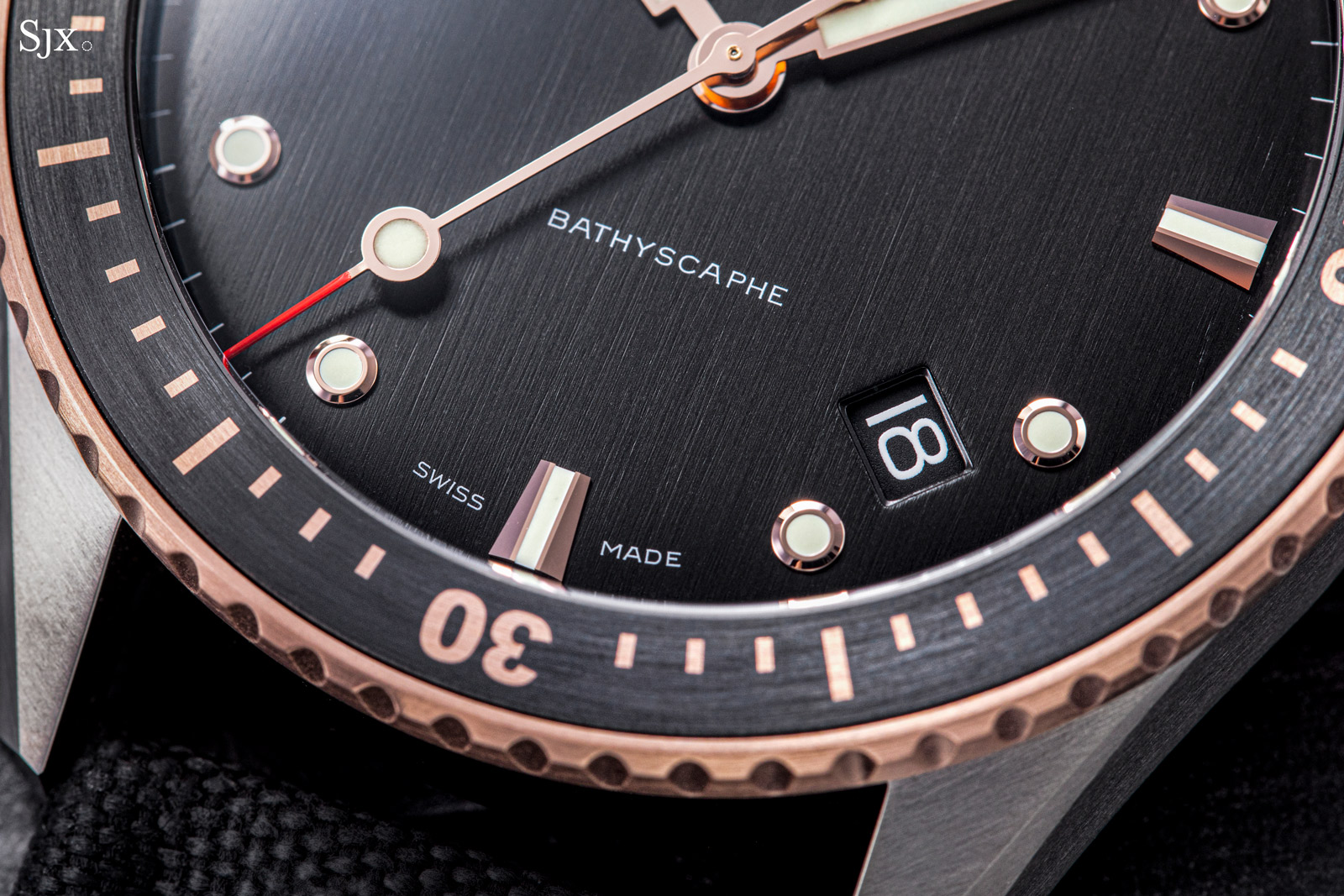 Like the standard model, this is powered by the cal. 1315. The only difference on the back between the Cortina edition and standard version is the anniversary label printed on the underside of the sapphire back, which unfortunately partly obscures the movement details. Still the movement is worth a look because it is executed unusually well for an ostensibly utilitarian watch.

Developed as a sophisticated but workhorse movement, the cal. 1315 the simplest calibre in a family that includes several more complicated movements, including examples featuring a big date or triple calendar. Like many of Blancpain’s movements, the cal. 1315 has a simple, monochromatic appearance but reveals notable details both functional and decorative up close. Although the Bathyscaphe is an entry-level dive watch, the cal. 1315 is impressively high-spec. For one, it has a long power reserve of 120 hours, which is five days, a result of three barrels.

It’s also equipped with a free-sprung, adjustable mass balance of Blancpain’s own design. The balance is relatively small, a key factor behind the long power reserve. 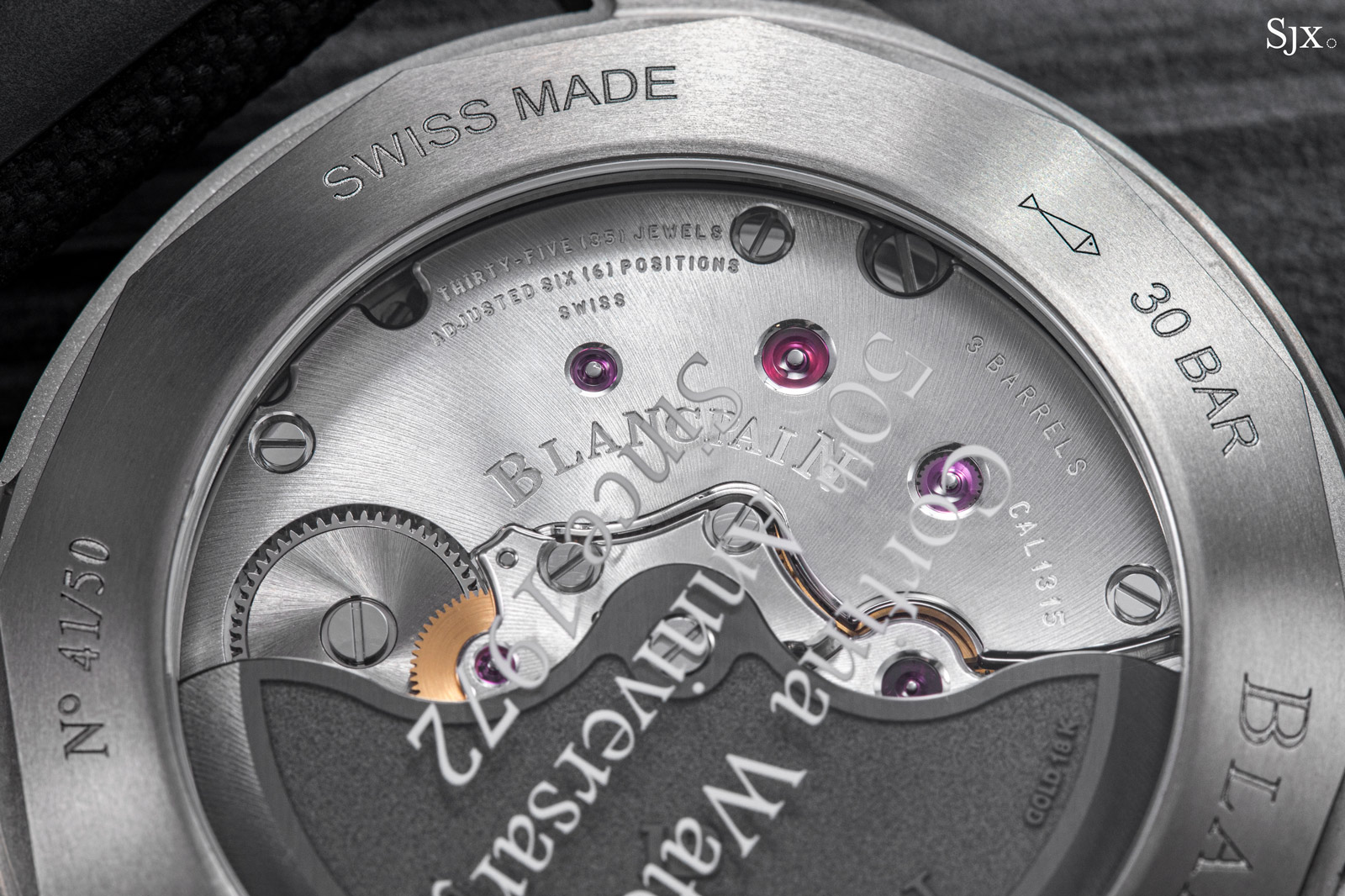 Like many of Blancpain’s current movements, the cal. 1315 is also fitted with a silicon hairspring that’s immune to the effects of magnetism, explaining the “antimagnetic” label engraved on the case back.

The movement decoration is appears simple because it lacks contrast. The most obvious decorative element is the solid gold rotor, but even that has been dressed in a discreet matte grey.

But under magnification the movement is evidently finished well, especially considering the nature of the Bathyscaphe and its price. The bridges have a fine radial graining with prominent, polished bevelling. Because the bridges are numerous, there is a substantial length of bevelling across the movement. The bevelling appears to have been first done by machine, then given a once over by a hand-held polishing tool to create a rounded, mirrored finish.

The densely arranged bridges mean that little beneath is visible, but based on images of disassembled Blancpain movements I’ve seen, I expect the hidden components to be equally neatly finished. Excellent in all tangible respects of finishing and details, the Bathyscaphe Cortina is good looking and well priced. It also manages to look recognisably different from the standard version thanks to the Sedna gold elements. A bracelet, however, would have been ideal.

Limited edition: 50 pieces
Availability: Only at Cortina Watch
Price: 20,700 Singapore dollars including GST (equivalent to about US$15,000)

For the golden jubilee of Cortina Watch.