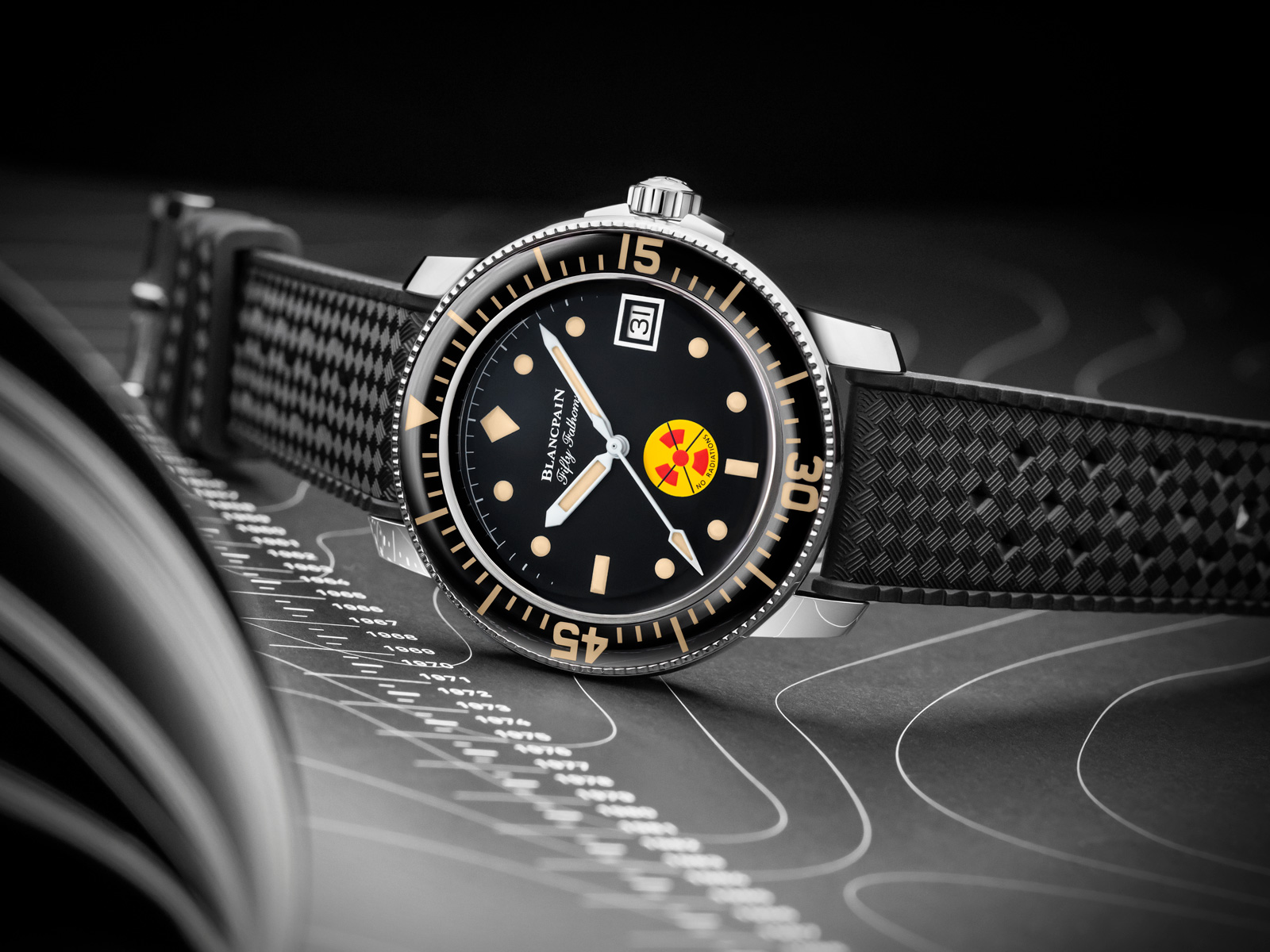 Blancpain’s iconic dive watch introduced in 1953, the Fifty Fathoms was named after the maximum depth then considered to be safe for divers, about 91 m. The Fifty Fathoms also claims the title of being the first purpose-built dive watch, though Rolex contends that its Submariner came first.

Produced in a great many iterations, the Fifty Fathoms has become highly collectible in good number of variations, including those bearing the “No Radiations” logo – used in the early 1960s to indicate that radioactive radium was no longer used for the luminescence of the dial. That watch has now been revived by Blancpain as the Tribute to Fifty Fathoms No Rad, a limited edition that channels the spirit of the 1960s original, but executed in modern-day Blancpain quality. 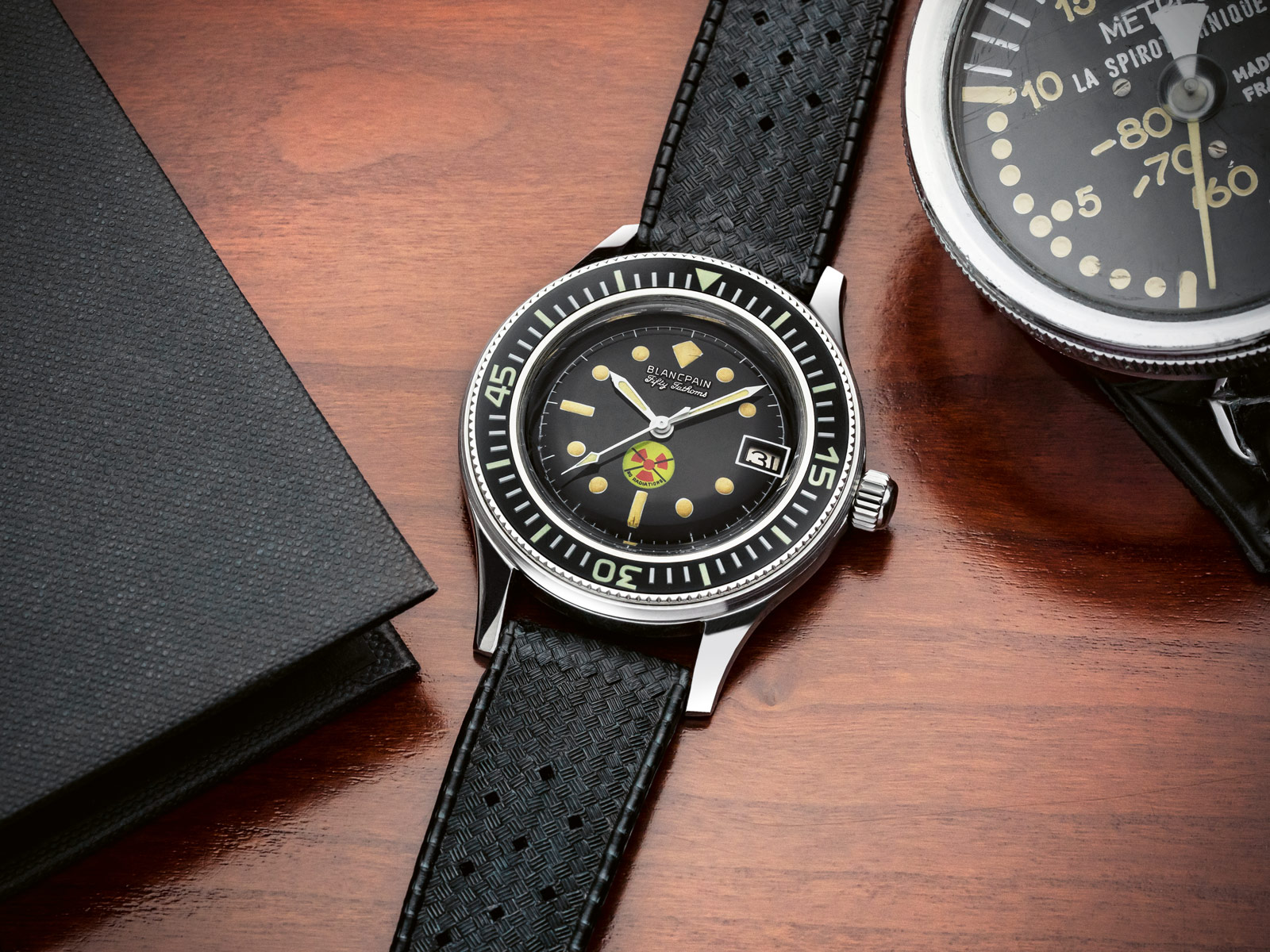 An example of the vintage Fifty Fathoms “No Radiations”

A staple of Blancpain’s line up, the Fifty Fathoms has been revived in various guises over the last few years, with the latest “No Rad” being the latest of several vintage remakes. The abundance of Fifty Fathoms limited editions – all similar but slightly different – have diminished its uniqueness somewhat, but the “No Rad” is nonetheless compelling.

For one, the design has some provenance: the vintage “No Radiations” is a rare watch that’s exploded in value on the secondary market. And the “No Radiations” dial is quaint and quirky, but also historically significant in the transition from radium to tritium, creating an undeniably cool aesthetic that captures the essence of its era when Scuba diving was a novelty and radium was the norm for watches. 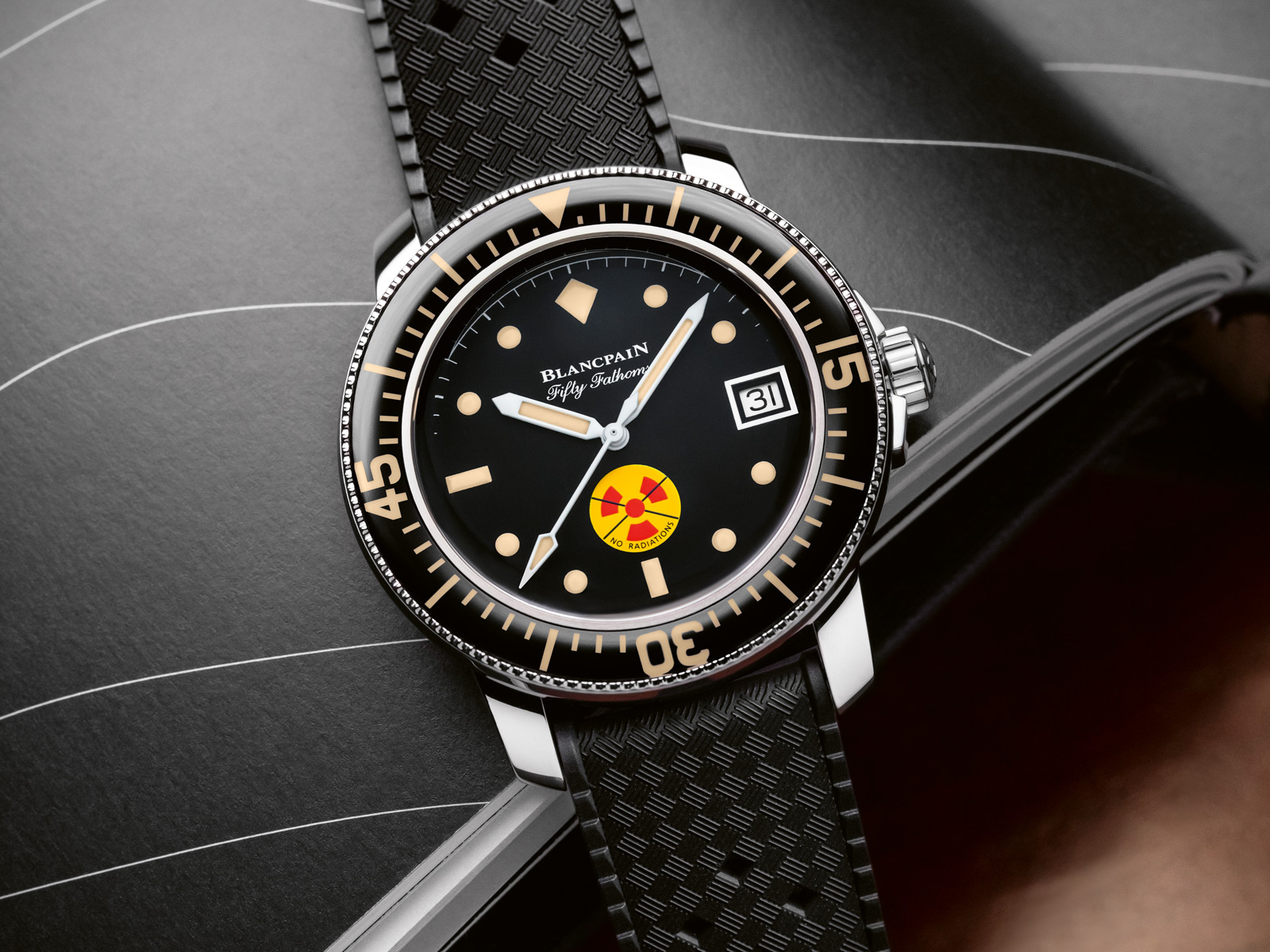 This is the second “No Radiations” limited edition, the first having been released in 2010. However, the new “No Rad” is undoubtedly the better-looking of the two. With its pencil hands, (way) smaller case, and ivory Super-Luminova to mimic a vintage watch, the Fifty Fathoms No Rad has a distinctively vintage feel, though clearly a modern watch.

At US$14,100, the Fifty Fathoms No Rad is similarly priced to recent Fifty Fathoms limited editions, and actually slightly cheaper than the previous “No Radiations” model of 2010.  That’s a fair price for an attractive rendition of the Fifty Fathoms, especially one that is limited to 500 pieces. 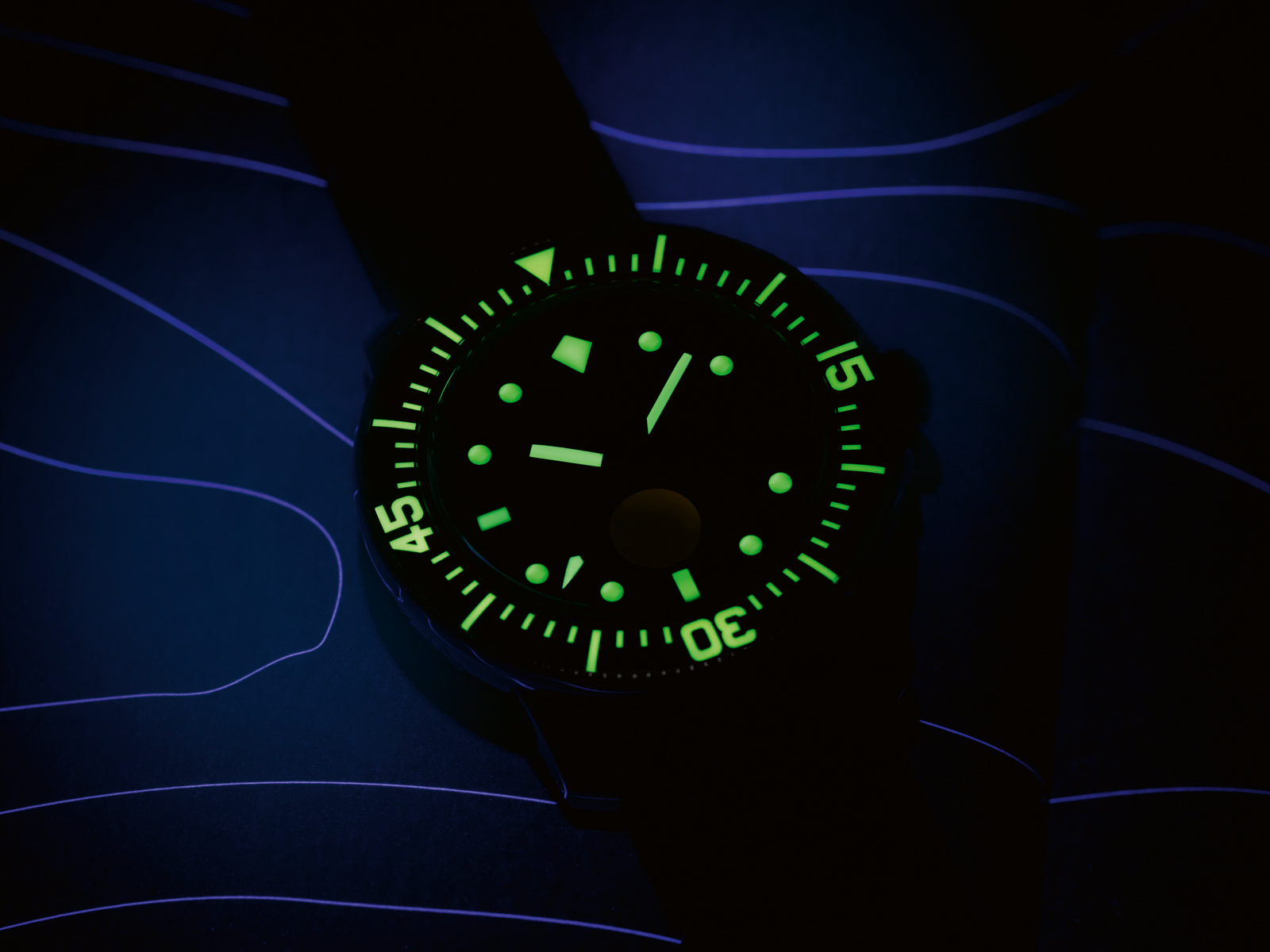 The most distinctive aspect of the Fifty Fathom No Rad is the yellow and red “No Radiations” logo that’s practically identical to those found on the vintage originals. Also modelled on the vintage model is the matte black dial with a diamond-shaped marker at 12 o’clock, and a date window outlined in white. 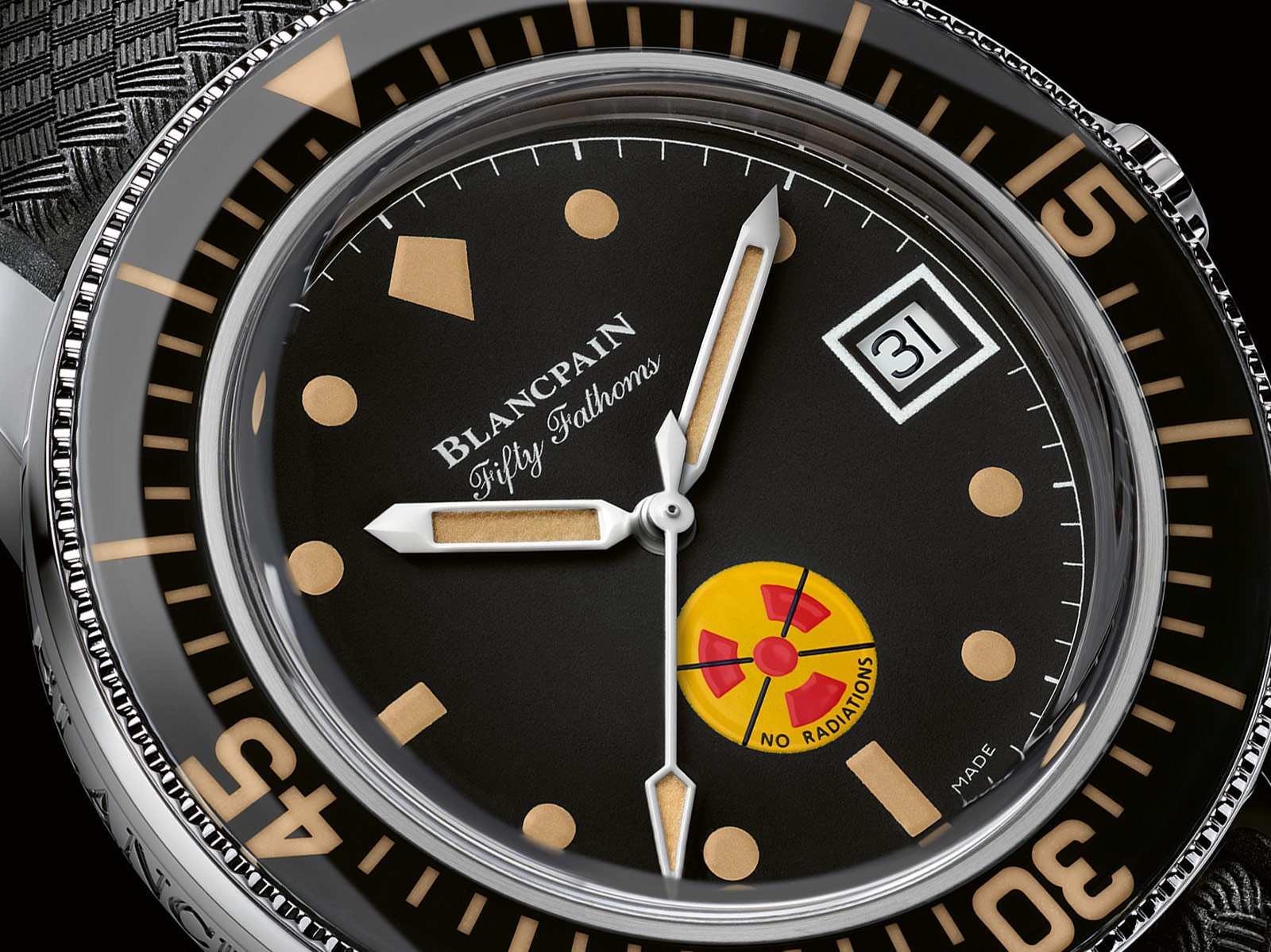 Likewise, the domed bezel – with a 60-minute scale – is a nod to early Fifty Fathoms models, which had minute markers all along the scale for a more precise reading of elapsed time. But while the originals were fragile bakelite, the bezel on the “No Rad” is covered with a sapphire insert, a hallmark of modern Fifty Fathoms watches. 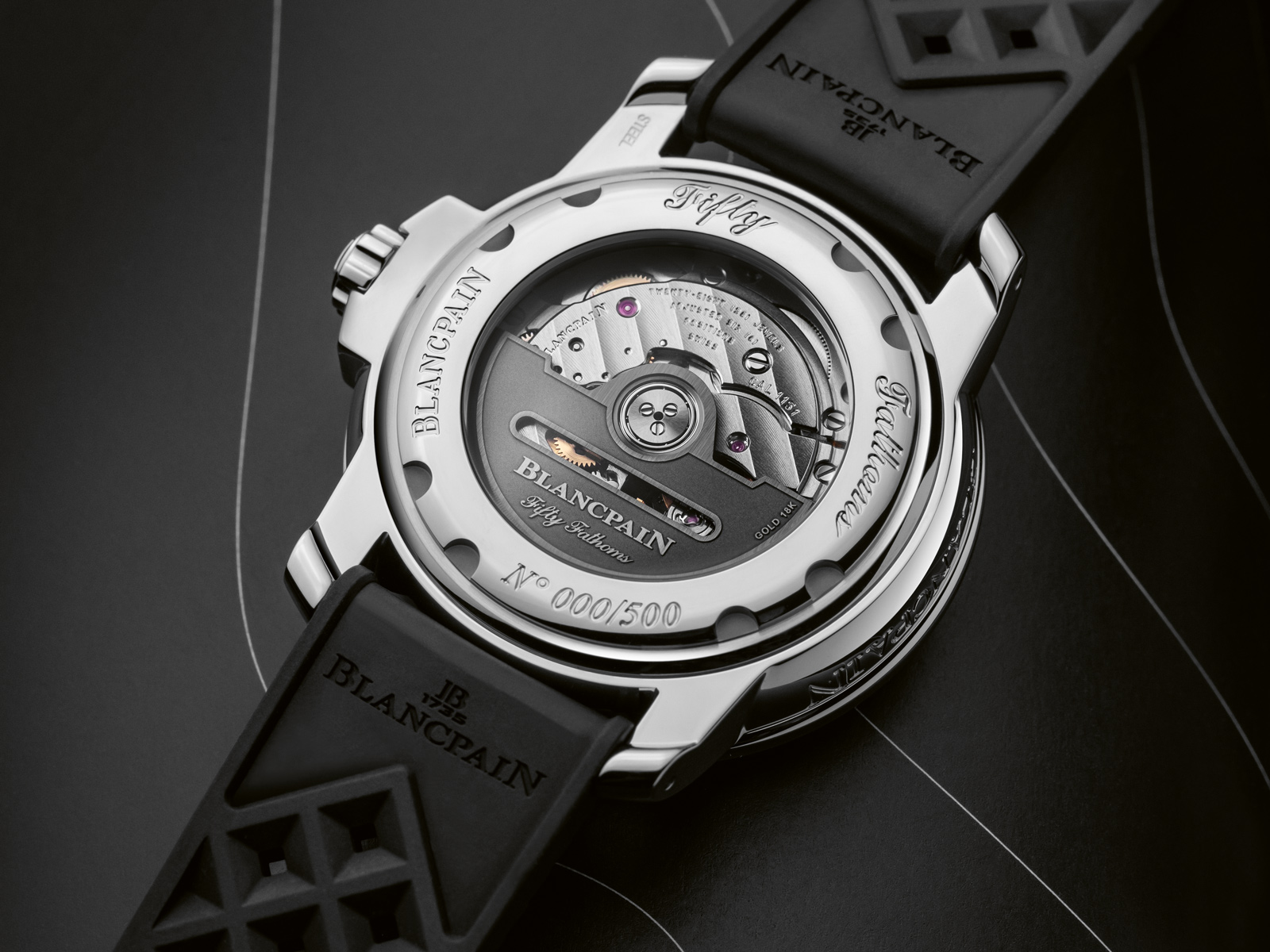 The watch is powered by the cal. 1151, which was once made by Frederic Piguet, the movement maker that is now part of Blancpain. It features a silicon balance spring and a dual-barrel construction that gives it an impressive four day power reserve. Though the movement is clearly modern, it incorporates a nod to the original. The 18k gold rotor has a “cartouche” shaped aperture, just like the rotor on the original Fifty Fathoms, which was ostensibly for increased shock resistance.