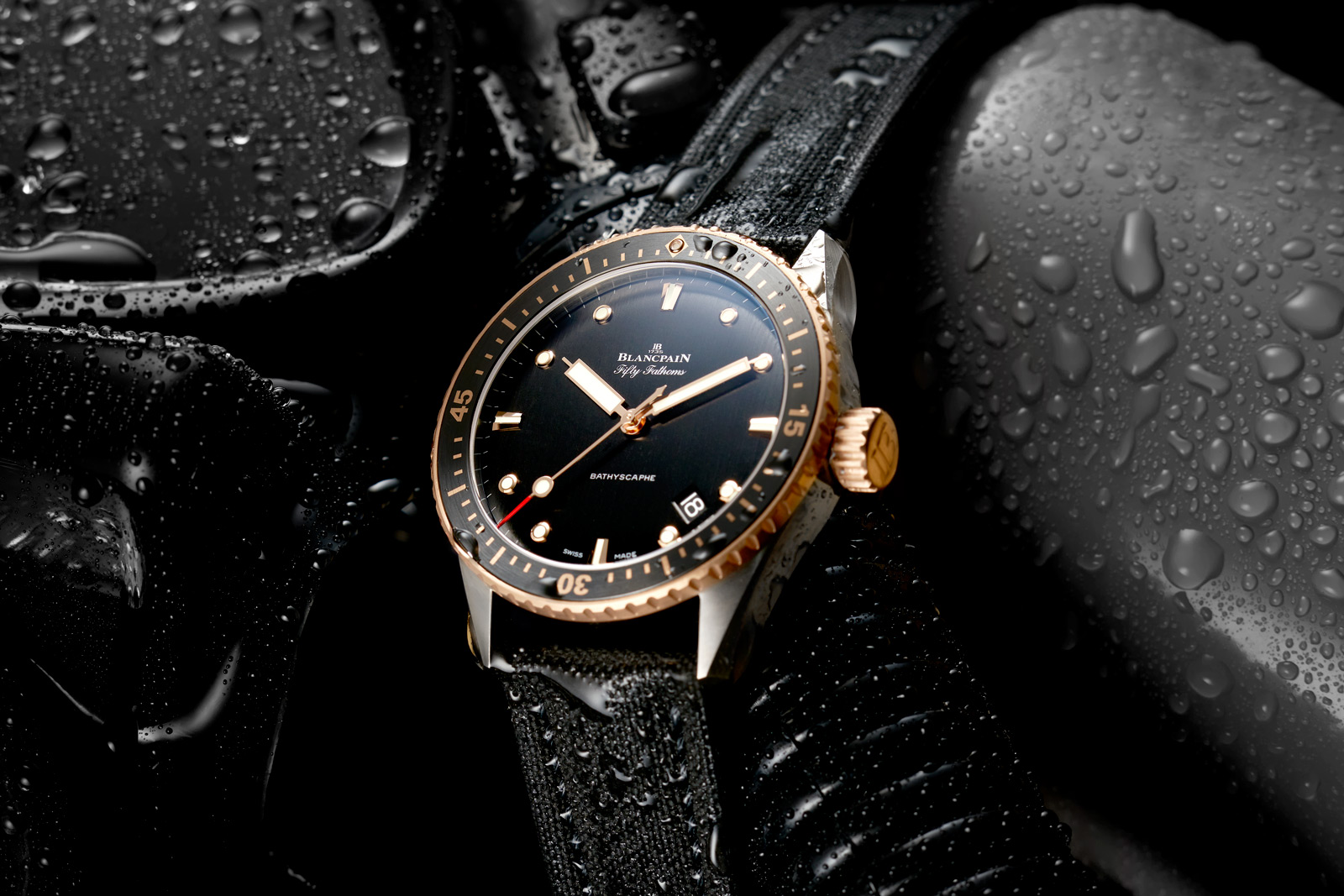 Singapore retailer Cortina Watch is marking its 50th year in 2022 with progressive launches of anniversary editions, which started with the Patek Philippe Calatrava ref. 5057G that made its debut at the beginning of the year. Now it’s the turn of the Blancpain Fifty Fathoms Bathyscaphe Cortina Watch 50th Anniversary, the first of the brand’s dive watches to feature a two-tone case in titanium and 18k Sedna gold.

The Bathyscaphe is probably the best looking amongst Blancpain’s Fifty Fathoms range of dive watches. It has the right degree of retro style, while also being relatively compact and wearable. And it avoids being too different, too vintage, or too big, as many of other Fifty Fathoms divers are; the Bathyscaphe is just right in many ways. 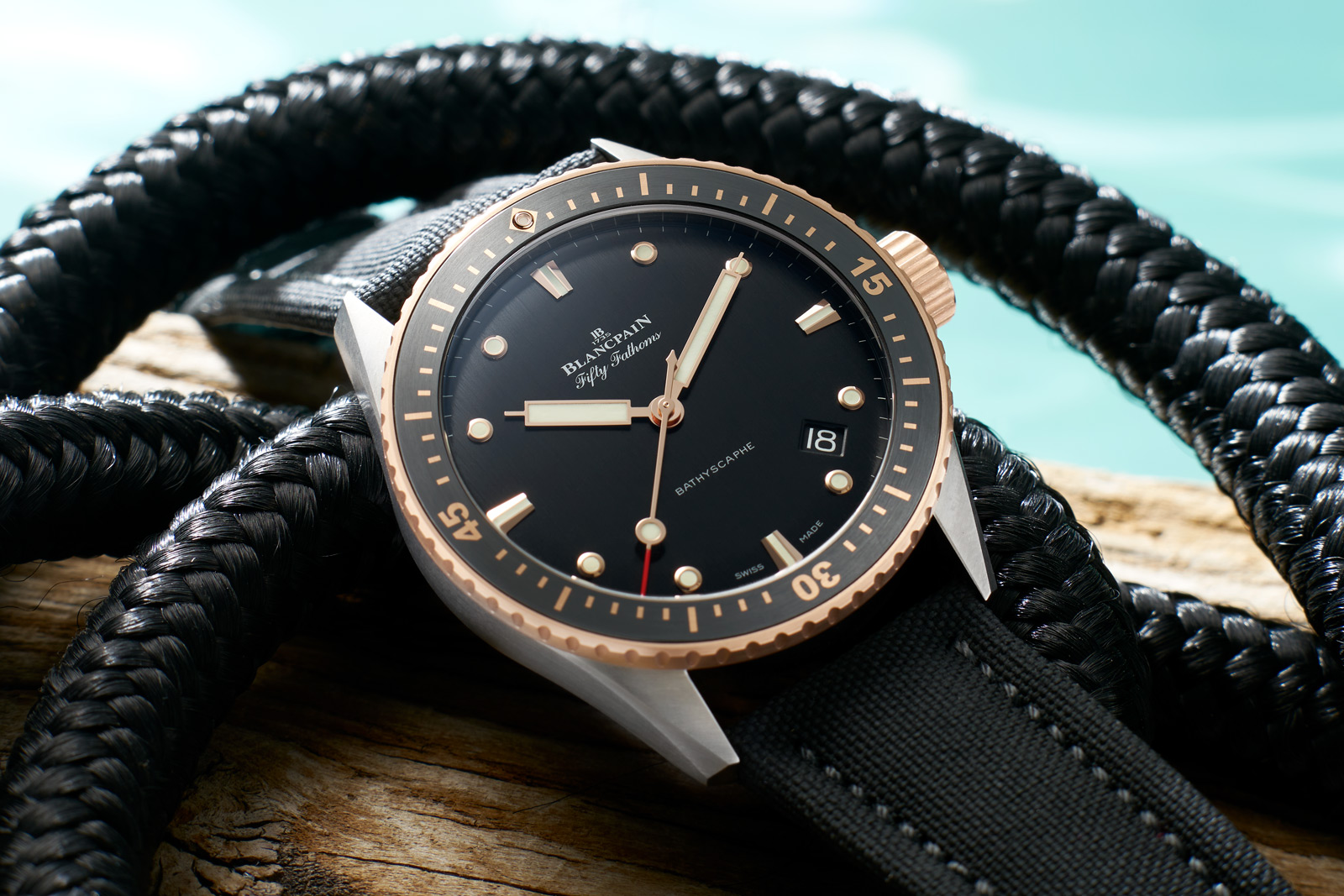 The new edition is a modest variation on the original, but a good one. In contrast to the almost-monochromatic standard model, this version looks a little fancier without being over the top thanks to its gold elements.

At the same time, the gold parts are balanced; the bezel, for instance, is set off by the gold crown. But the look is restrained with the brushed bezel insert and dial, so it doesn’t stray too far from the original.

What the watch is missing, however, is a bracelet as it is delivered on a fabric strap as standard. Blancpain does have a titanium bracelet available as an additional purchase, however, it is not two tone though it should pair well with this watch. 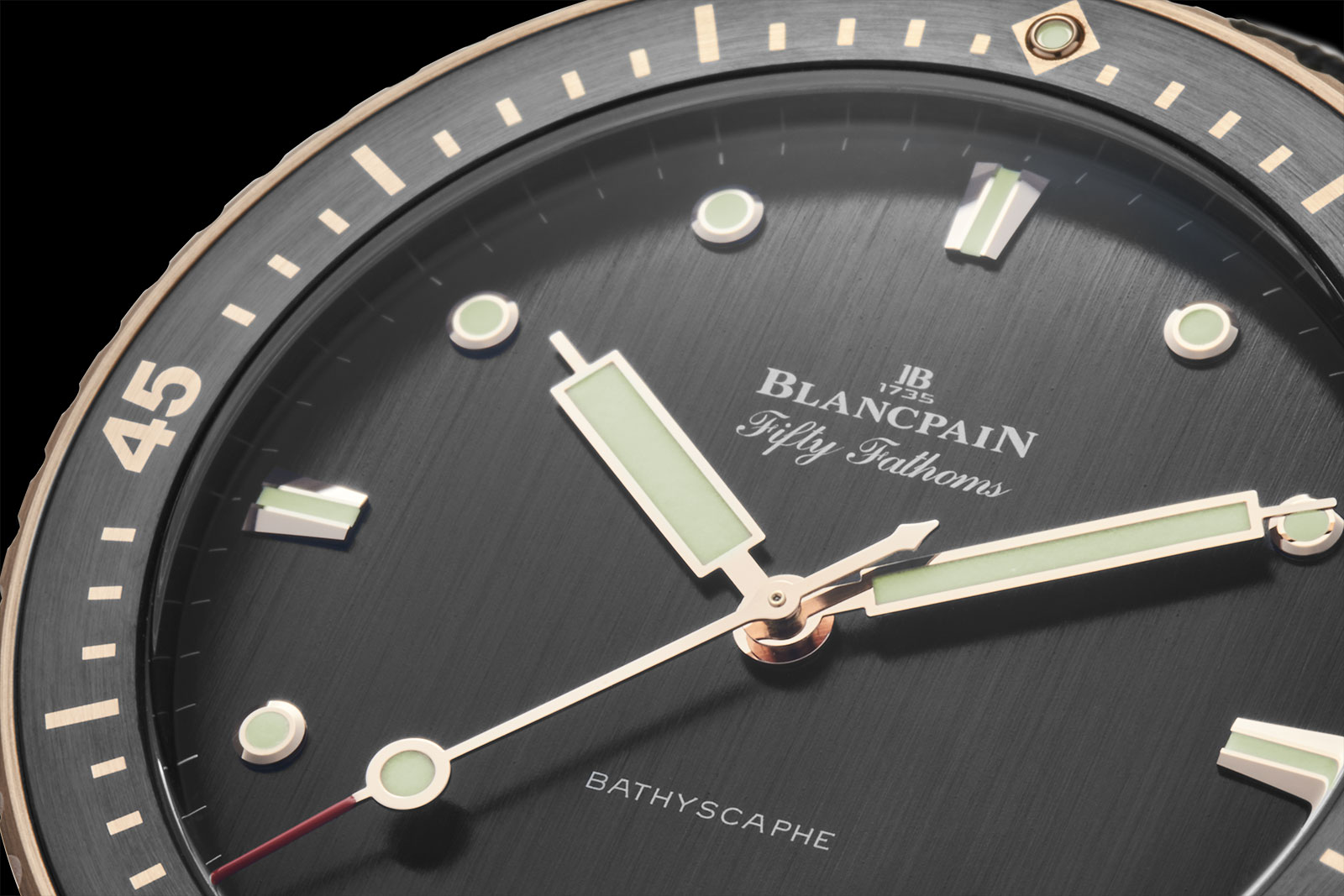 Though inspired by the vintage dive watch of the same name, the modern-day Bathyscaphe is, well, a modern watch and not a remake. It retains many design cues of the vintage original, but still looks and feels like a contemporary watch.

The standard Bathyscaphe is a fairly muted watch in grey and black. This edition dials it up with the bezel, crown, hands, and hour indices in 18k Sedna gold. 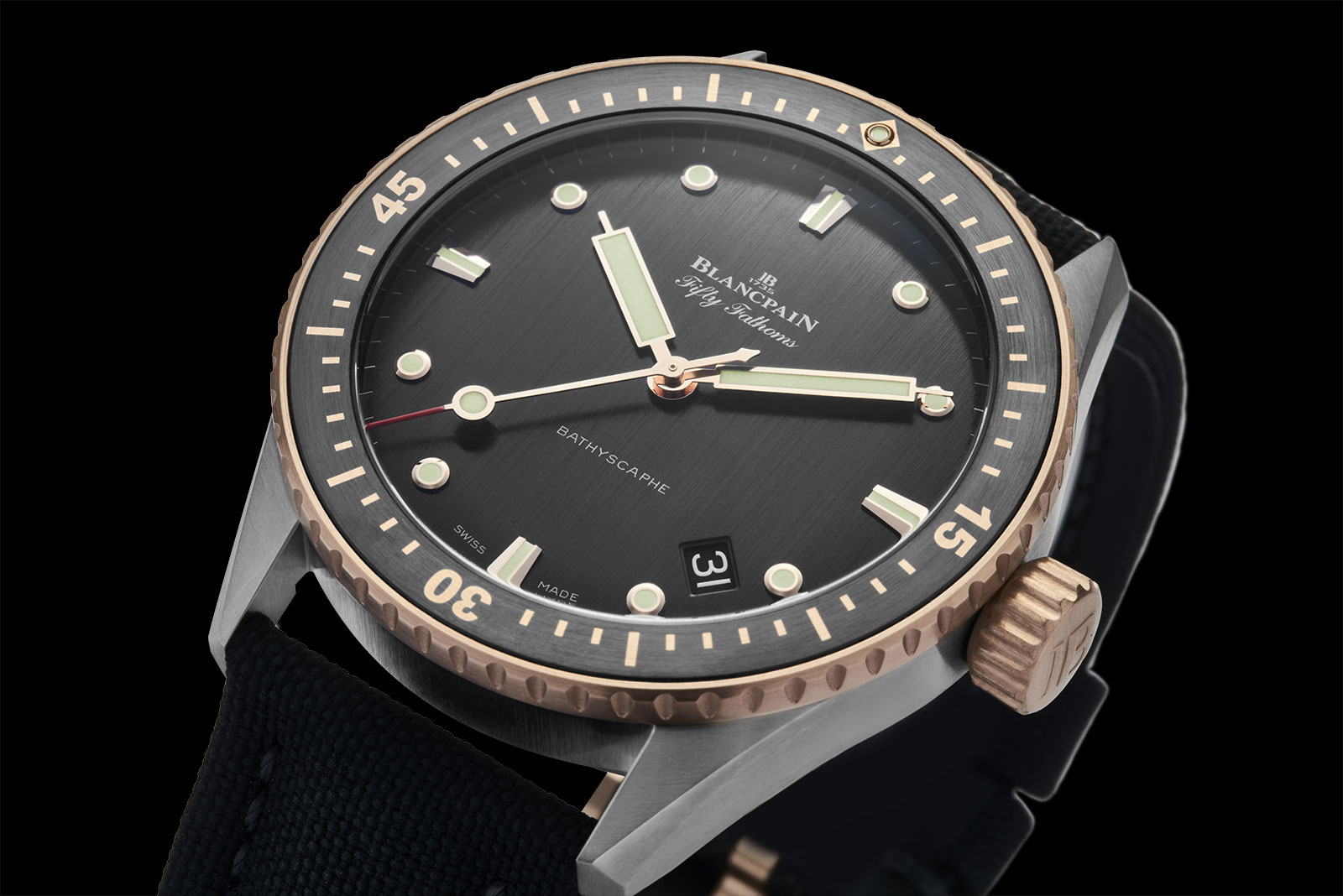 The alloy is better known as Omega’s proprietary rose gold alloy that includes a healthy amount of palladium, preventing it from fading with time as typical rose gold alloys do. Blancpain has used Sedna gold in the past, but only for the entire watch case and not in a two-tone combination until now.

Another bit of Omega tech in the watch is the bezel insert, which is brushed ceramic. The markings on the bezel are Ceragold, which is 18k gold that’s embedded and bonded to the ceramic base, then polished so that the markings are flush with the bezel surface. Omega is of course Blancpain’s sister company in Swiss watch conglomerate Swatch Group. 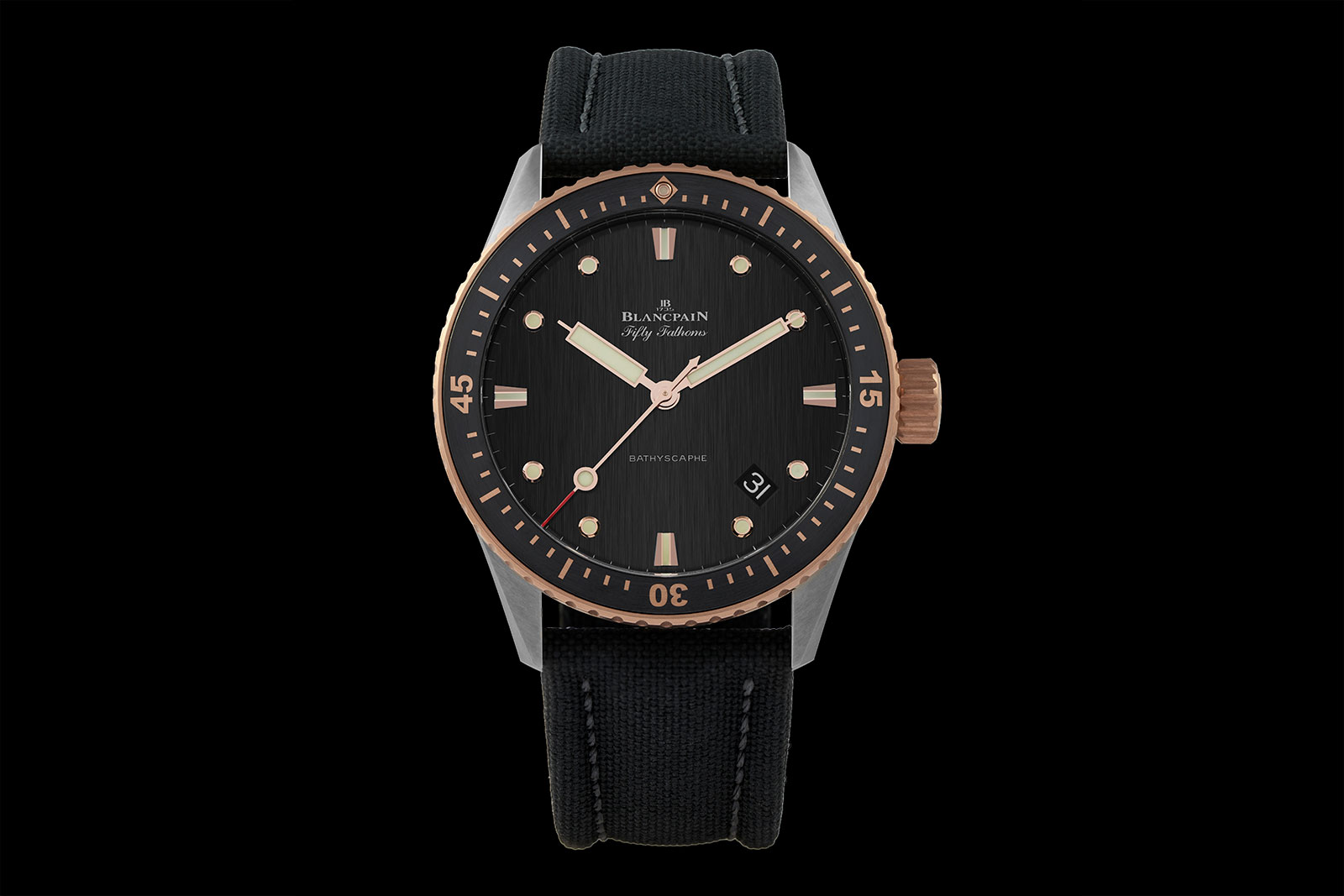 Despite being a relatively unusual edition, the anniversary branding is discreetly placed only on the case back in the form of printing on the underside of the crystal. Unfortunately it gets in the way of the view.

The movement is the cal. 1315, Blancpain’s in-house calibre with a lengthy, five-day power reserve. Like all Blancpain movements, it has a clean, workmanlike finish that is amongst the best in the category. 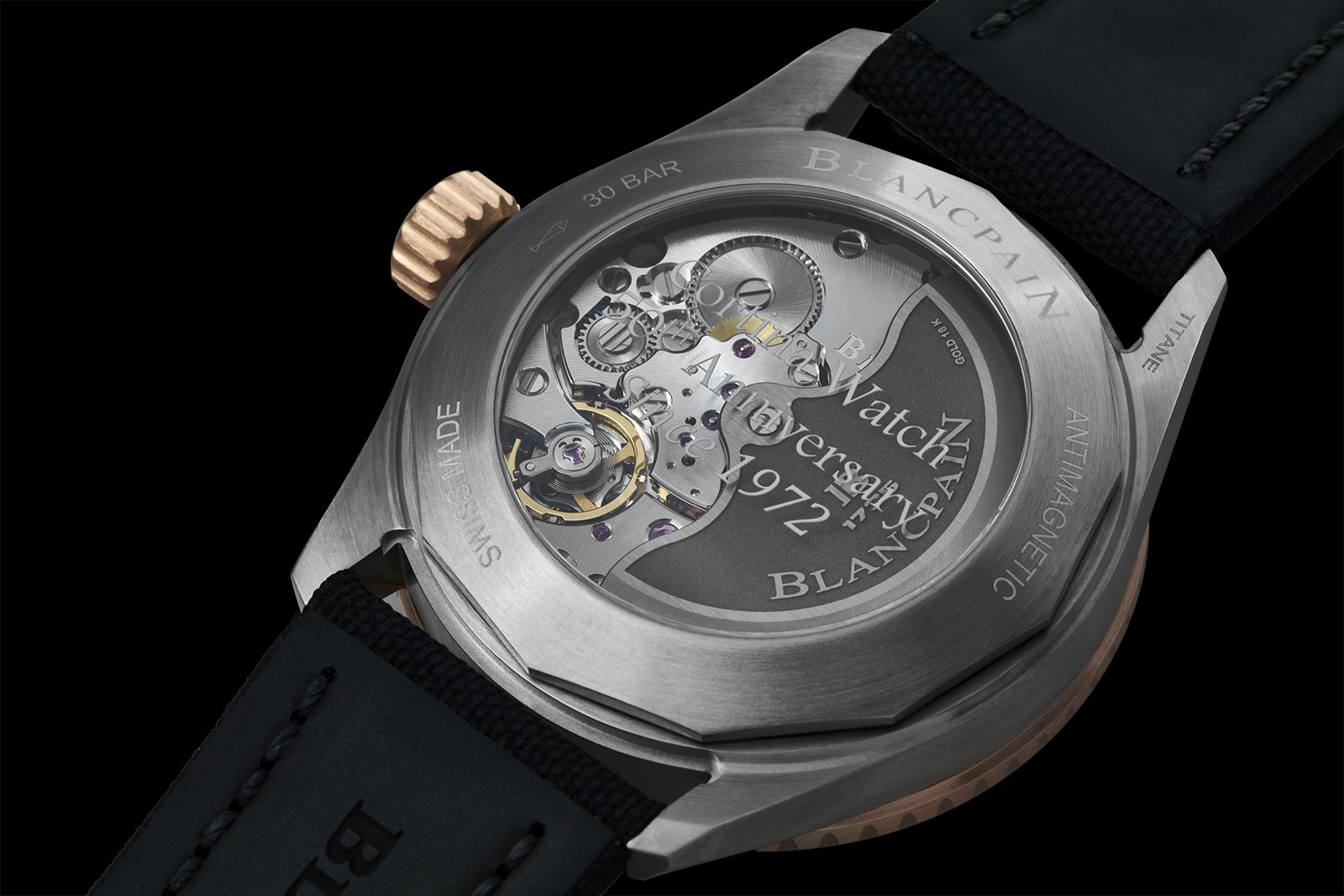 Limited edition: 50 pieces
Availability: Only at Cortina Watch
Price: 20,700 Singapore dollars including GST (equivalent to about US$15,000)