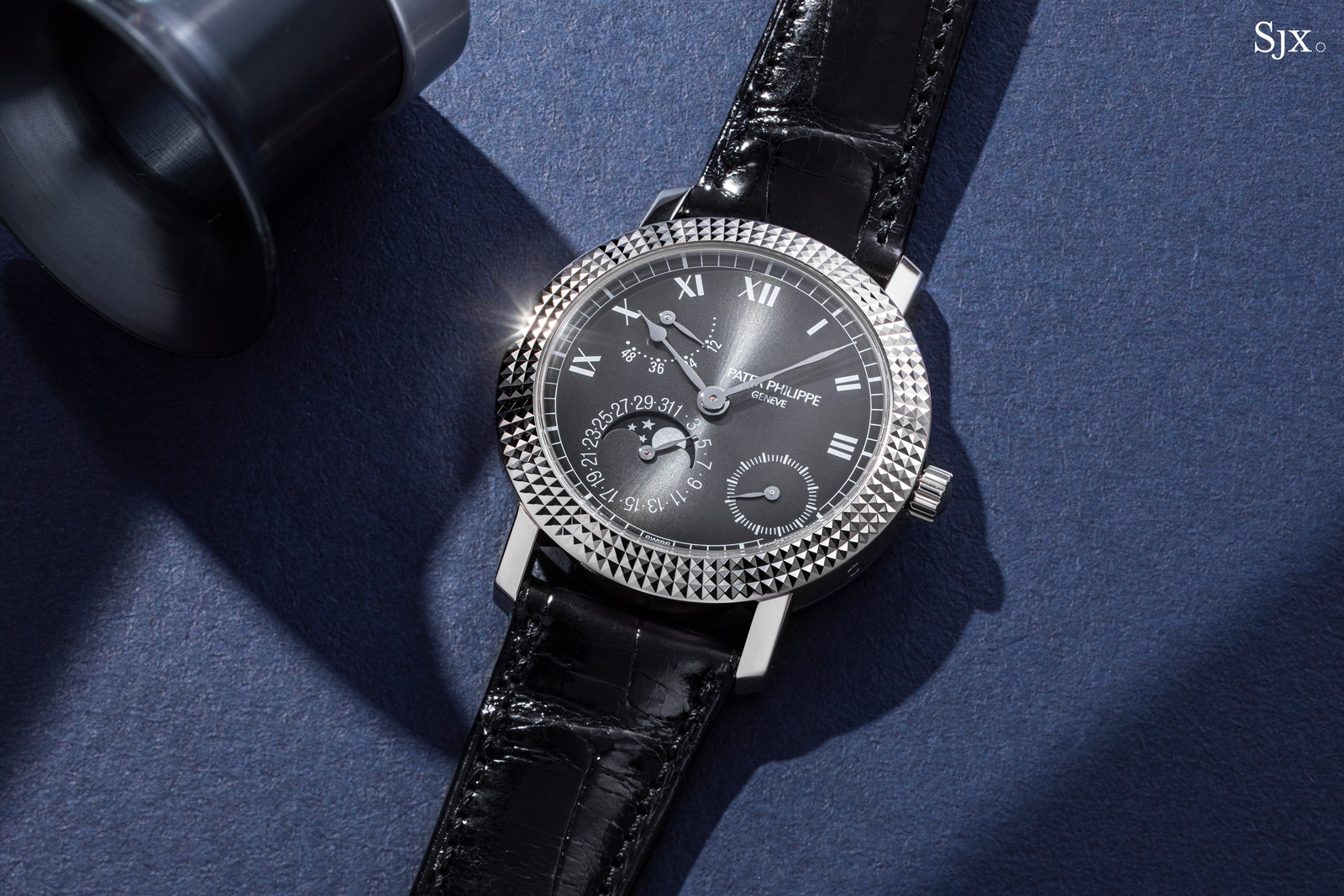 Conceived for the jubilee of Singapore-based retailer Cortina Watch, the Patek Philippe Calatrava Ref. 5057G-010 is a throwback to the nineties in both size and size, but given a contemporary flavour with a dial in smoked grey.

In fact, it is a remake of the original model, the ref. 5057R that was in rose gold. Interestingly, the reference was specifically created for Cortina’s 25th anniversary in 1997, giving the ref. 5057 the distinction of being a reference unique to a retailer. 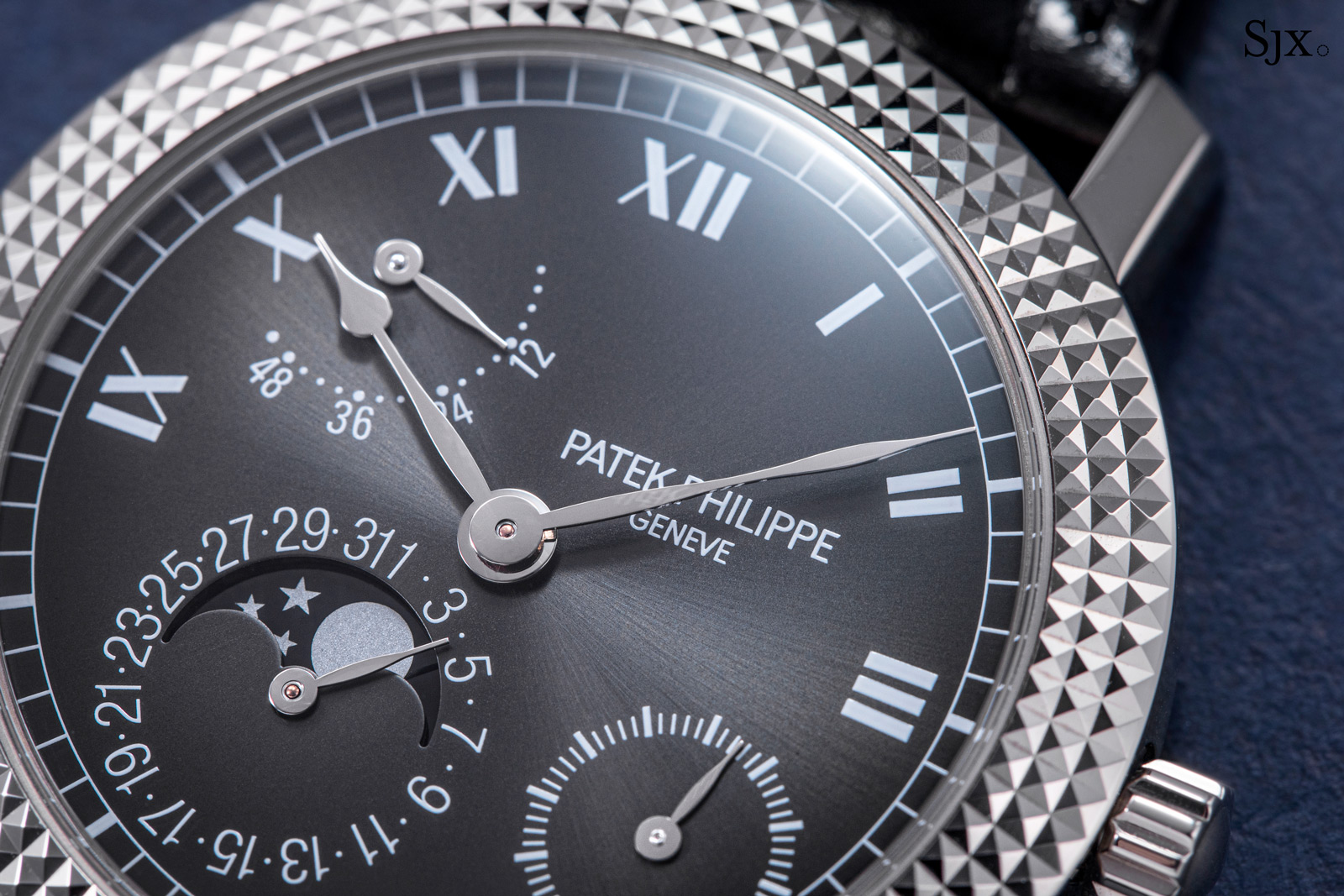 Though it’s small by modern standards – it’s a bit over 36 mm in diameter – the ref. 5057G instantly stands out with its nineties style. The triple-row hobnail bezel and straight lugs instantly evoke Patek Philippe’s aesthetic of that decade. They set the ref. 5057G apart from the brand’s current offerings that have a more modern style. 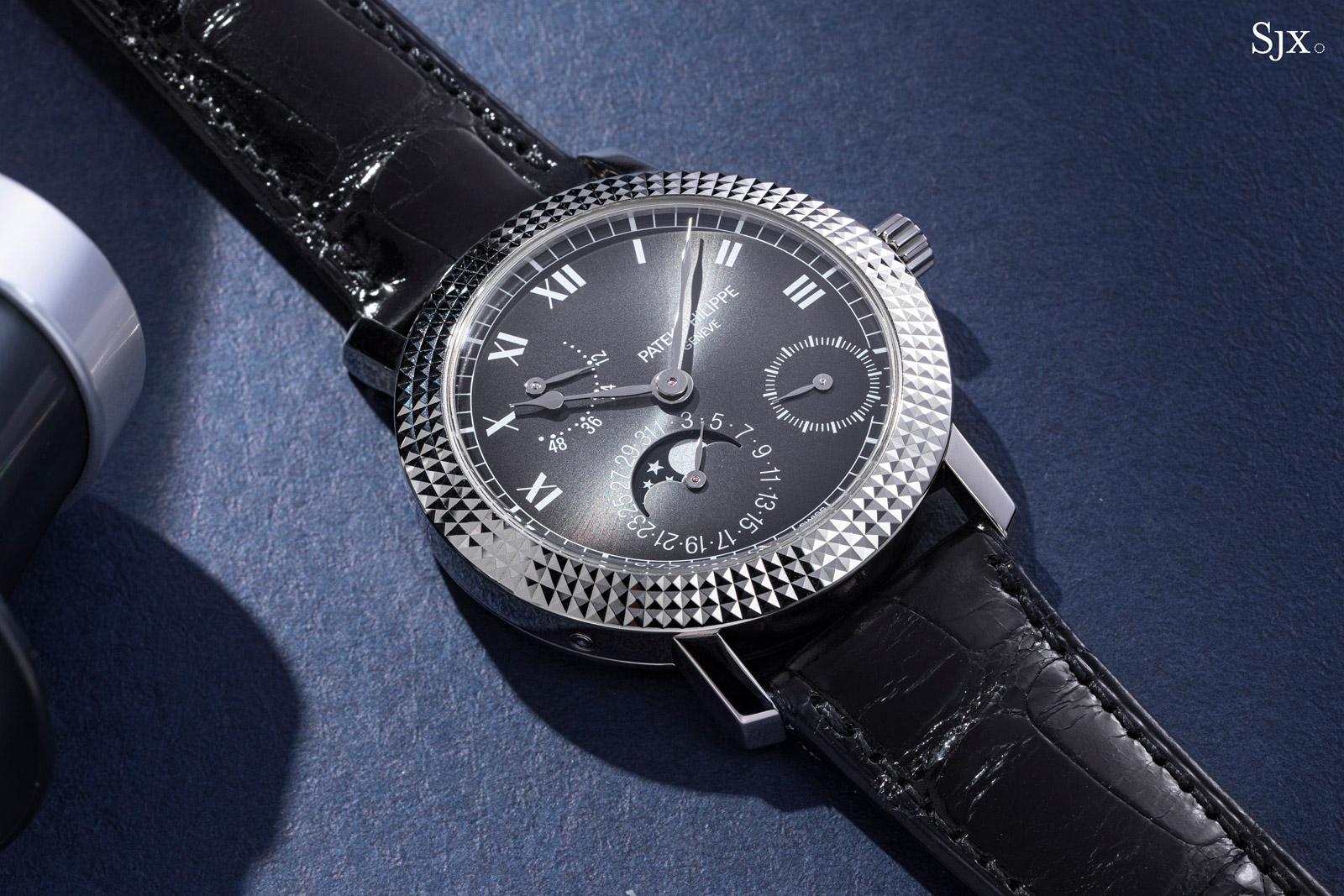 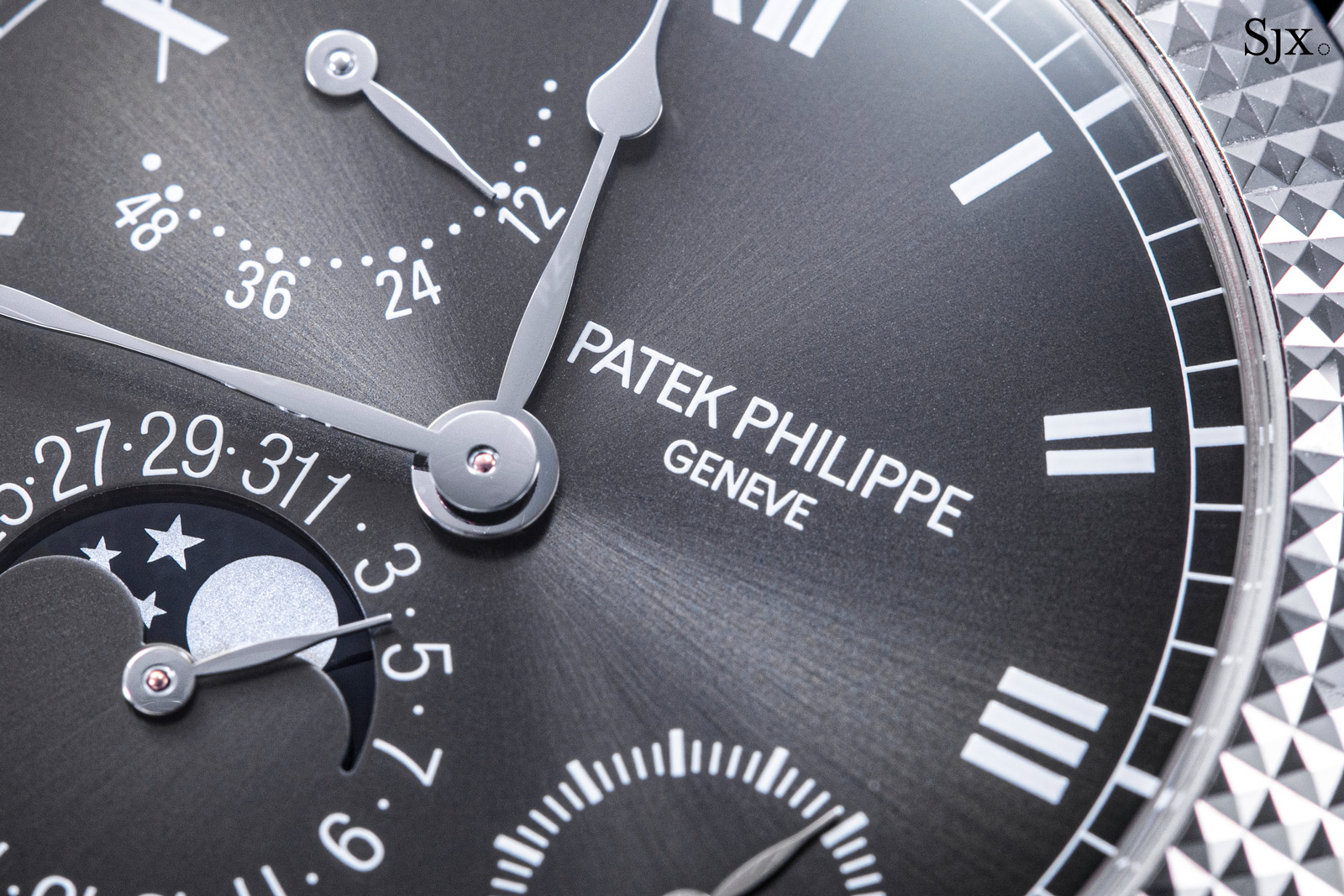 I like Patek Philippe’s style of that era, so I like the ref. 5057G. With the wide hobnail bezel, it’s a bit fancier than it should be, but that’s the appeal. And the bezel is the very feature that gives the watch presence. It catches the light well and is essentially “bling” for an otherwise conservative design. 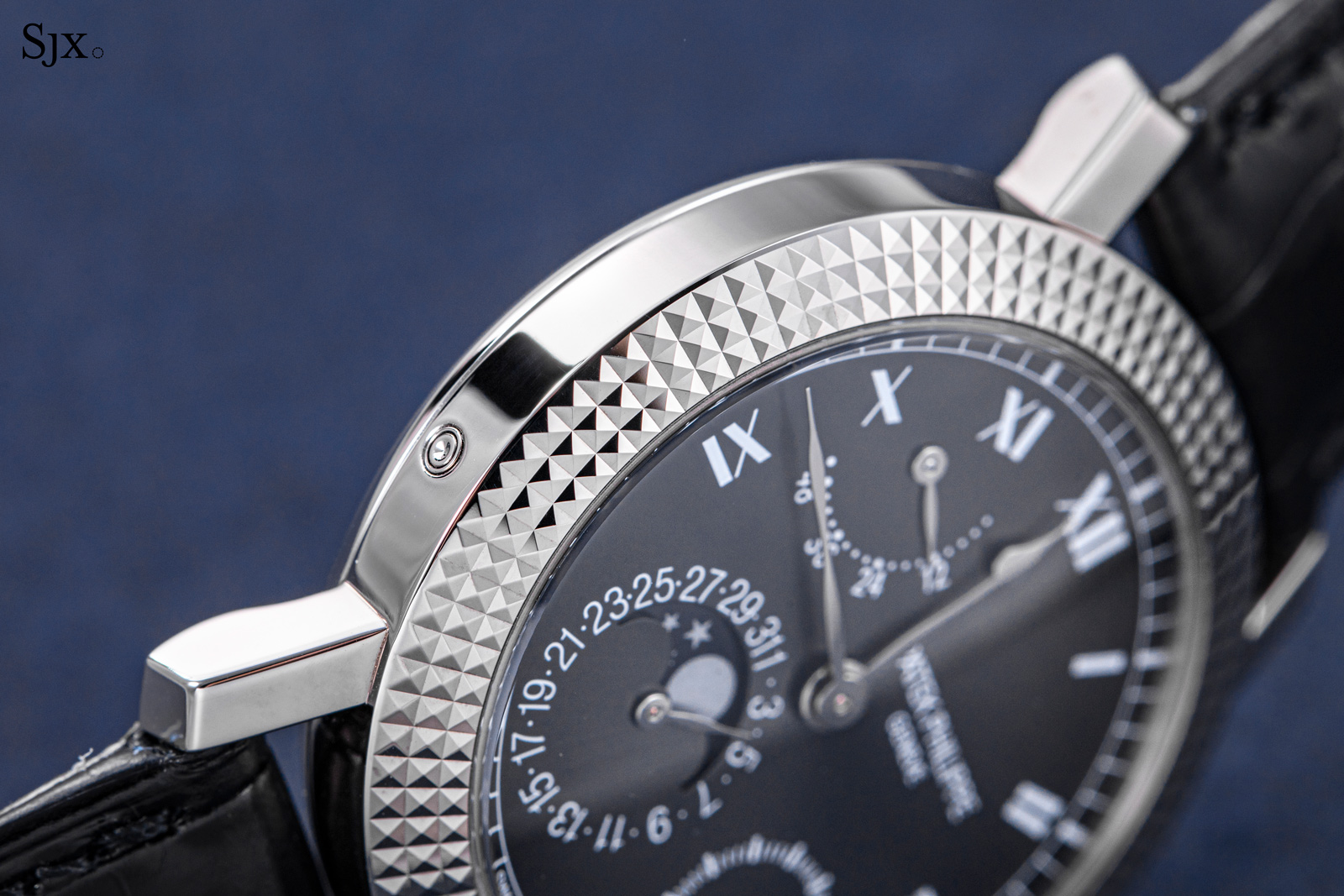 At the same time, the ref. 5057G is more attractive than the original model in rose gold, which lacked contrast due to its white-on-rose gold palette. By today’s standards the original is old fashioned.

The ref. 5057R of 1997 that was created for Cortina’s 25th anniversary and also a limited edition of 100 watches. Image – Phillips

Though the ref. 5057G retains exactly the same case, it has just enough tweaks to the dial. The radially brushed, smoked grey dial on the ref. 5057G create both contrast and reflectivity, which are a big part of its appeal. The ref. 5057G is also appealing because it is unique amongst current Patek Philippe models. Not only is the reference itself unique, being exclusive to Cortina, but the movement within is also uncommon. The cal. 240 PS IRM C LU inside is only found in one other model, the Nautilus ref. 5712. 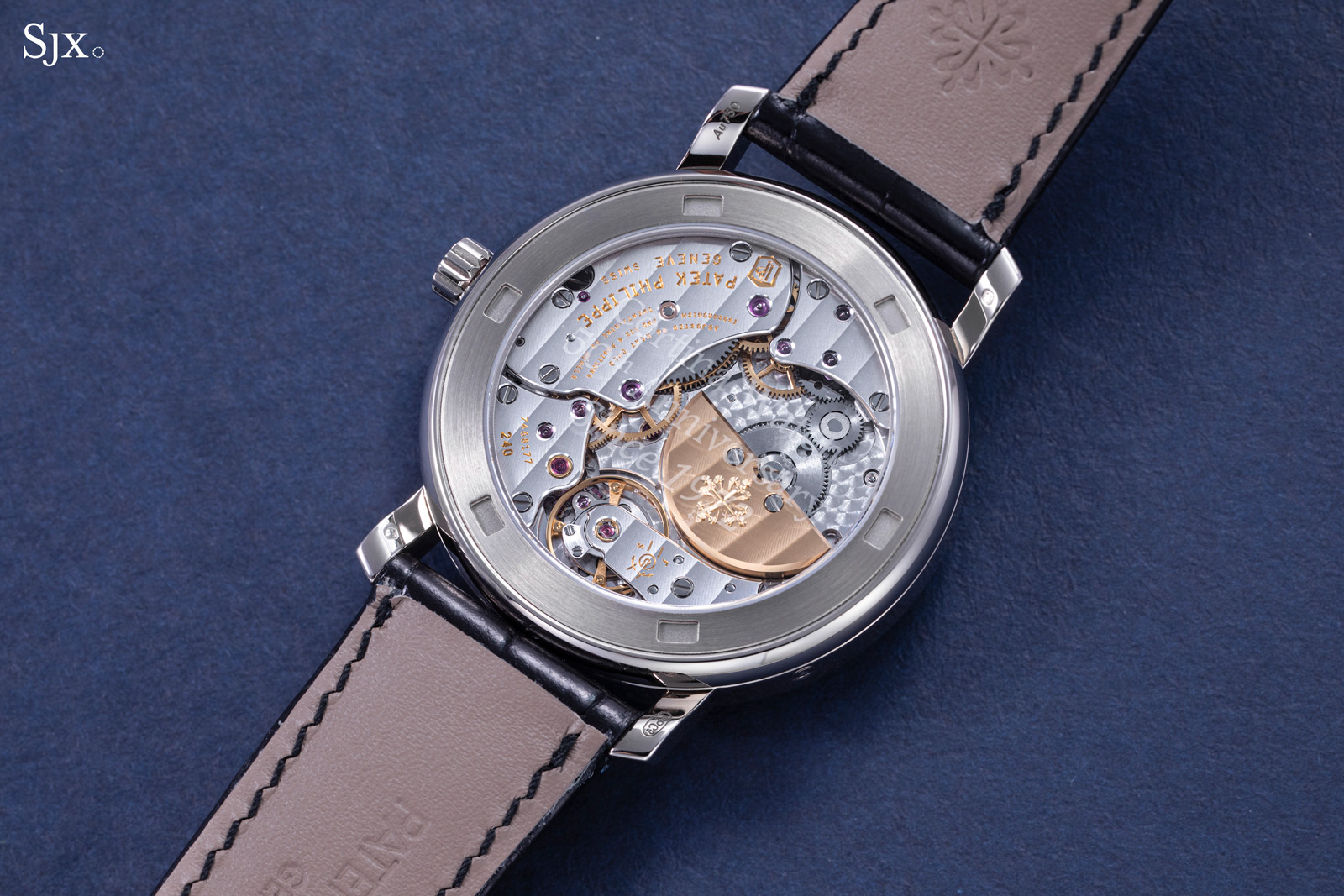 Also worth noticing is the discreet commemorative text on the underside of the case back. It’s translucent, meaning it isn’t too obvious

The only drawback to the design is the fact that it doesn’t incorporate any of the refinements and upgrades that Patek Philippe has implemented since the nineties.

The case, for instance, lacks the sculpted lugs that recent models features. At the same time, the dial is merely printed and goes without the applied markers that are now found even on entry-level Calatrava models like the ref. 6119. Like several of Patek Philippe’s other watches of the nineties, the ref. 5057G has an extravagant bezel. It’s finished with three rows of hobnails, making it unusually wide for a relatively small case.

The bezel occupies about a quarter of the case diameter, which compresses the size of the dial, but increases the visual presence of the watch. 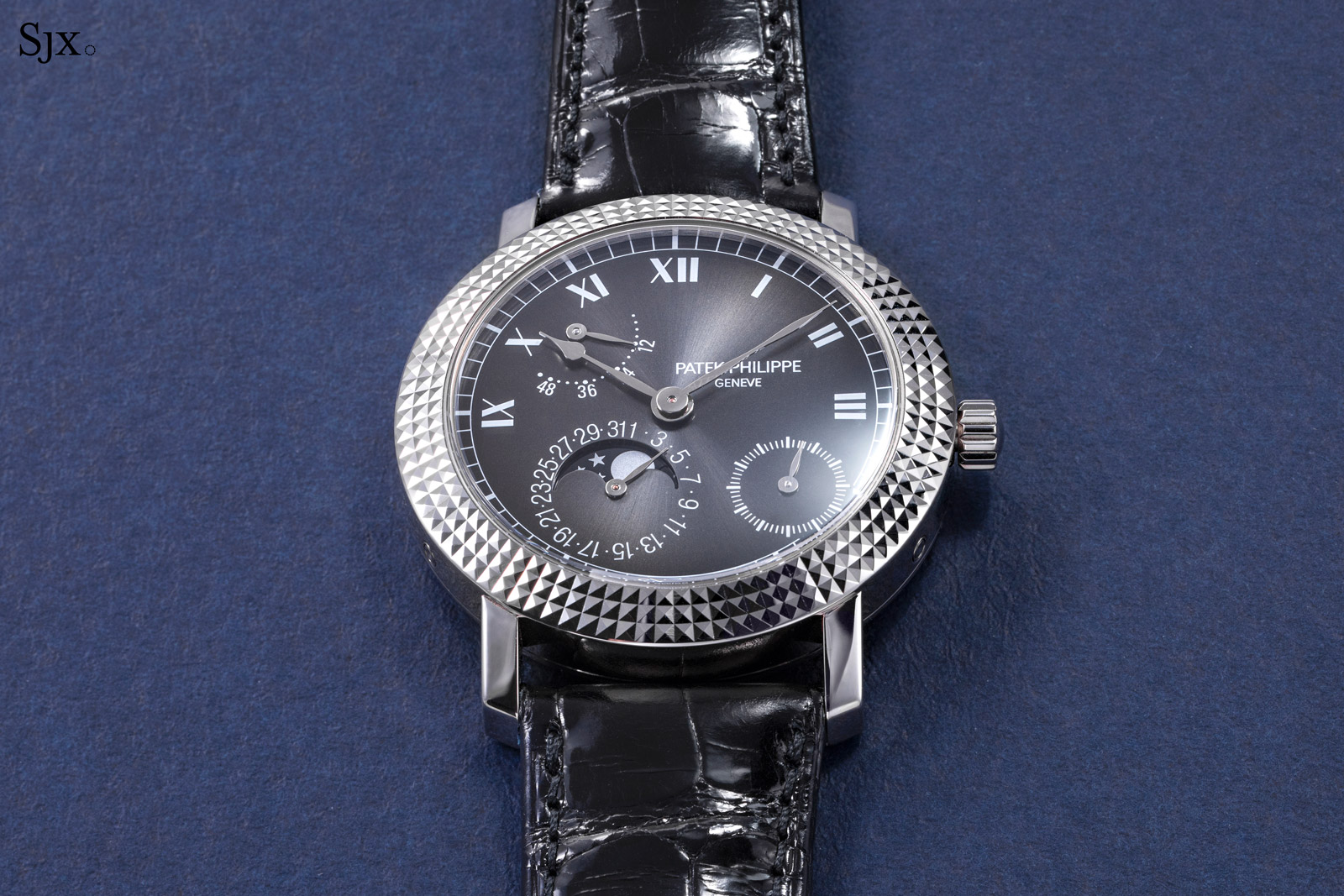 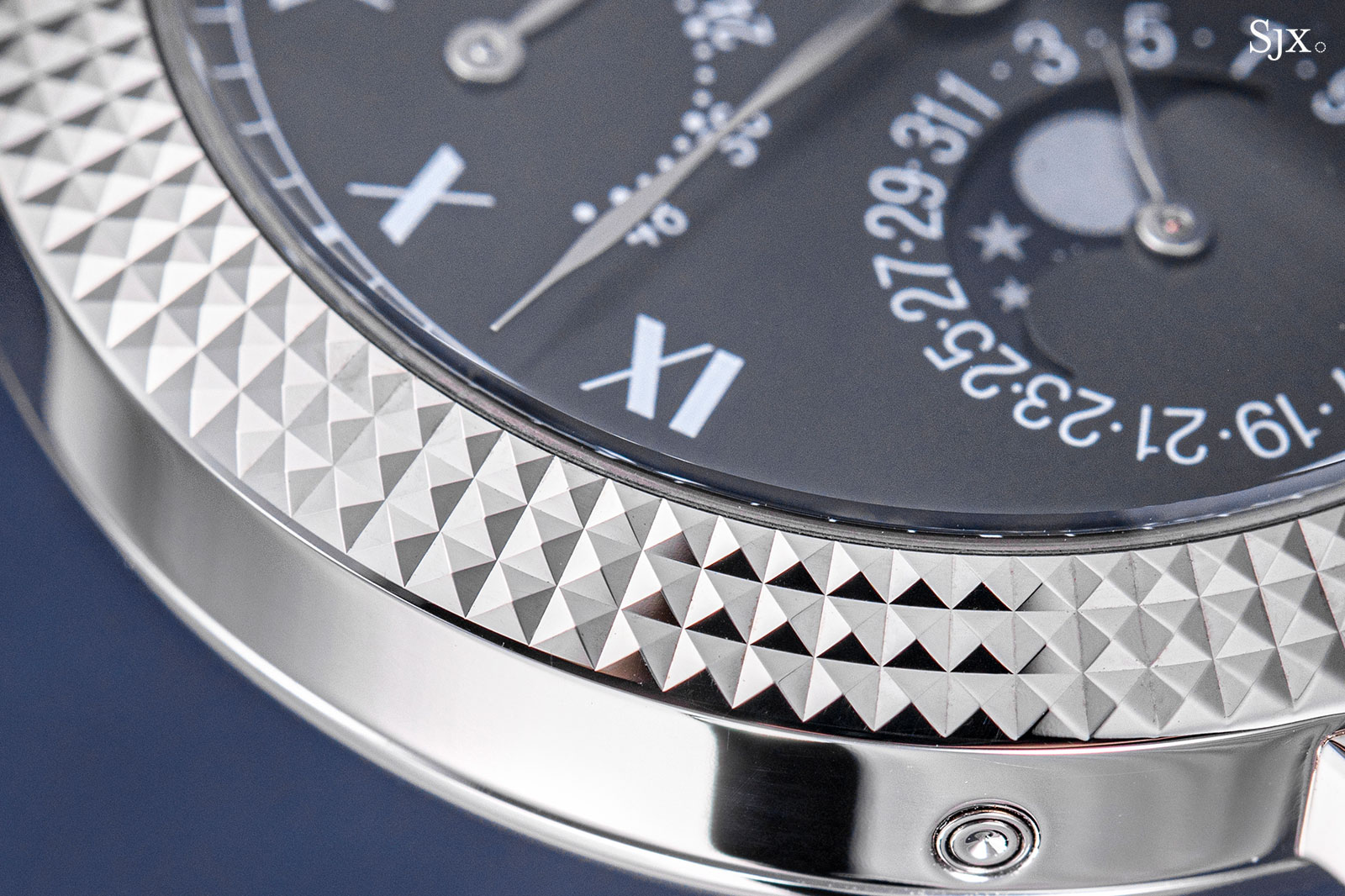 The hobnail bezel is sharply executed

The bezel is certainly integral to the case, which is only 36.15 mm in diameter. That makes it the smallest than any Calatrava in Patek Philippe’s current catalogue. While it is small, it isn’t too small. The size is just right for what it is. 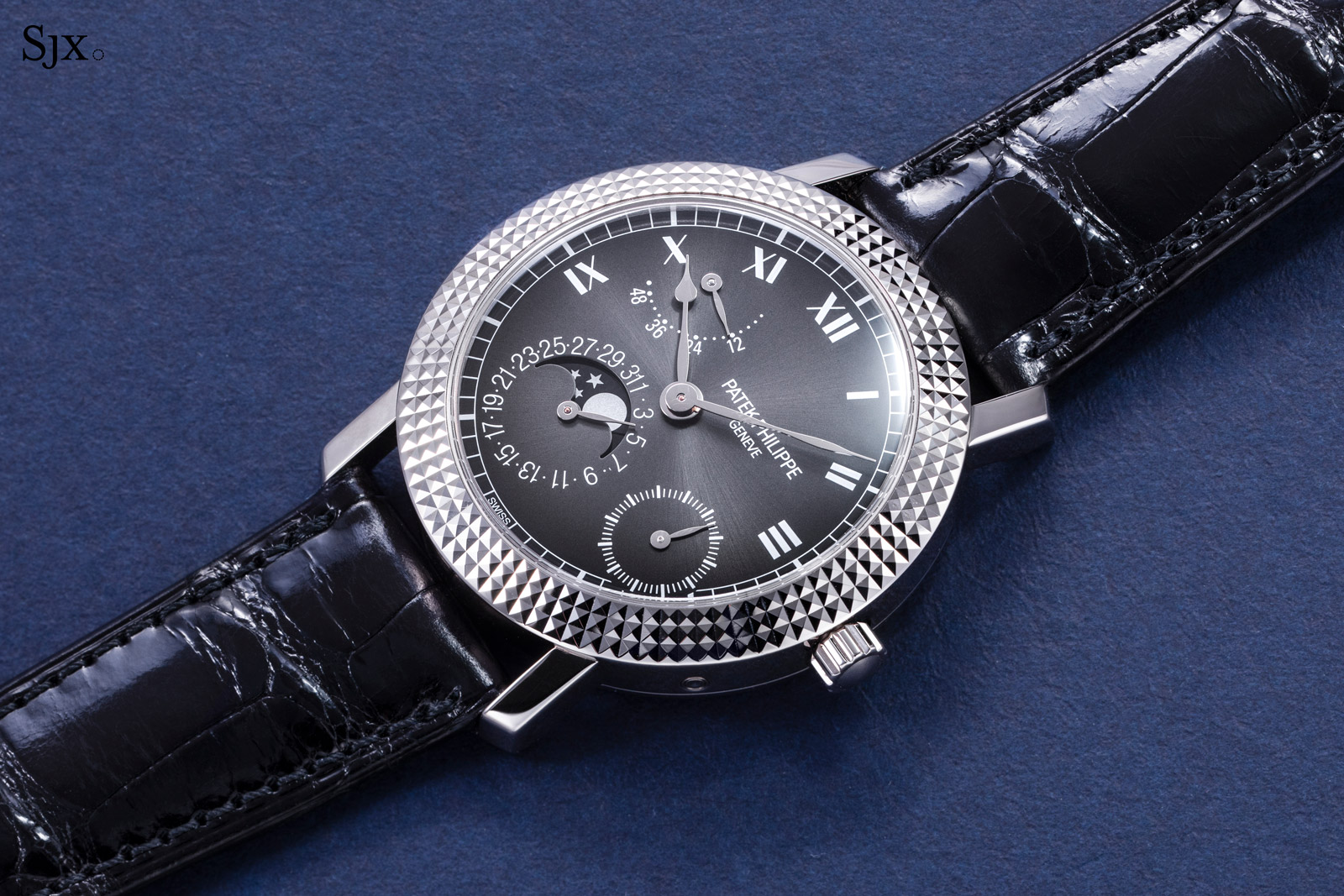 That said, the retro style and size also means the construction is nineties in manner. The case construction is simple, probably too simple for a watch of this price today. The lugs are soldered to the case, but they are plain. I would have appreciate some minor upgrades to the case style. The dial is composed primarily of classical elements, but the colours and finish give it a modern feel. In fact, the design is identical to that of the first ref. 5057R in rose gold, so it is literally a nineties design, but the finish and colours are very much rooted in today. It’s radially brushed and treated with a galvanic process to create the grey finish. And then finally it’s varnished to create the graduated finish at darkens towards the edges.

Already relatively simple, the finish is also familiar since it’s been used by other brands. But it is attractive. The grey finish works especially well with the clean white print, particularly the large Roman numerals. I would have liked to have luminous Roman numerals and hands. Pure-white Super-Luminova would be entirely in keeping with the overall aesthetic, while giving the dial a surprising and subtle twist. That leaves the cal. 240 PS IRM C LU entirely visible. It’s a decades-old calibre but still fit for purpose thanks to its thinness as well as continuous upgrades over the years. Amongst the obvious upgrades is a silicon hairspring. This specific version of the cal. 240 features a date, moon phase, and power reserve indicator. Although it was once found in several references, the ref. 5057G is the only current model equipped with this movement, aside from the Nautilus ref. 5712, which is a very different watch. The finishing is typical of modern-day Patek Philippe calibres. Every component is clenaly and carefully decorated, although much of it is done by machine with only a few aspects appearing to have been done by hand. That said, the quality of decoration is comparable to that of Patek Philippe’s peers like Vacheron Constantin and Audemars Piguet. Note the bevelling and countersinks on the base plate, an indication of the careful and comprehensive finish, even if it is mostly done by machine

The ref. 5057G is an appealing watch on many levels – aesthetics, proportions, and rarity. While the old-school case lacks the sophistication of newer constructions, the hobnail bezel has charm. In fact, it’s probably the strongest element of the design.

There isn’t much to criticise save for one detail: the retail price of about US$55,000 is steep for a watch that is fairly simple in terms of mechanics, though that is pretty much within the ballpark for Patek Philippe.

Elegantly dressed in grey and white.