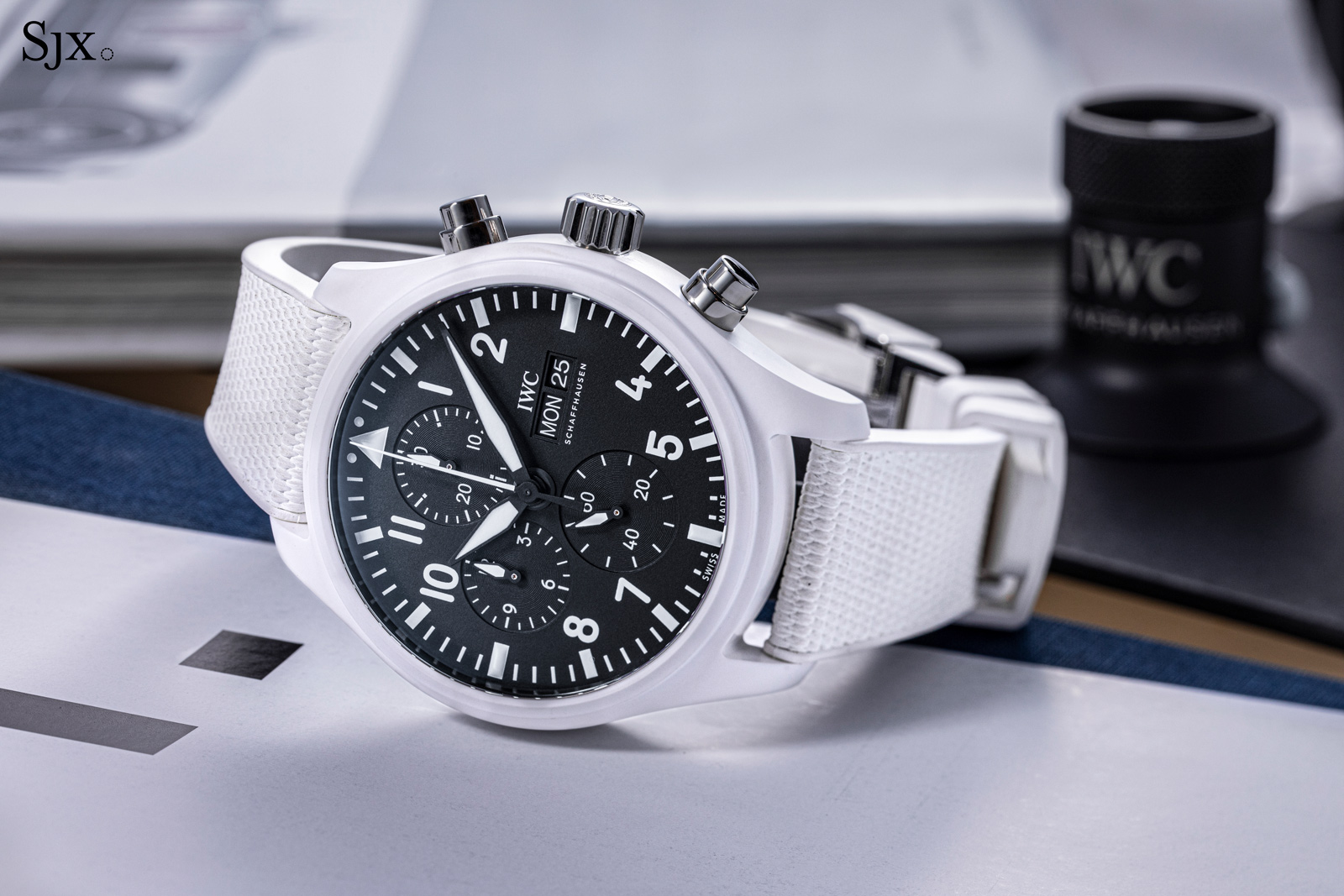 Launched in 2007, Top Gun is IWC’s line up of all-ceramic pilot’s watches. But since its inauguration over a decade ago, the Top Gun has largely relied on a singular colour of ceramic – black in either a matte or glossy finish. IWC did offer a few models with coloured ceramic cases, but they were limited editions, until now.

At Watches & Wonders 2022 IWC revealed ceramic cases in white or green with a pair of Pilot’s Watch Chronograph Top Gun Edition – both regular production models. Instantly evoking stormtroopers from Star Wars, the “Lake Tahoe” edition has a case of white ceramic, while the “Woodland” edition is in forest-green ceramic. Both are 43.5 mm in diameter and contain the in-house cal. 69380.

The two new models double the range of ceramic colours offered by IWC. They join the Pilot’s Watch “Mojave” editions launched in 2019 that had an unusual sand-coloured ceramic case, and last year’s “Laureus Sport for Good” in blue ceramic. Long the brand’s bestselling line, the Pilot’s Watch has been a focus of IWC in recent few years. The brand has made safe bets with iterating on popular models that have received upgrades such as in-house movements, new dial colours, or more compact cases in new materials.

In comparison the latest pair of chronographs are more adventurous. Intrinsically interesting because of their colours, the white and green ceramic cases are relatively uncommon for chronographs in this price range. White ceramic is more common than green, but even then it’s typically found on ladies’ watches like those made by Chanel, or far pricier timepieces from the likes of Audemars Piguet or Richard Mille. For anyone who likes the standard pilot’s chronograph but wants something more uncommon this is it. While the highlight of the pair is the case material, it’s worth noting that the new colours were achieved with no compromises to the watch’s functionality and performance.

Both chronographs are still very much a “tool watch” with their low-key palette, and also retain all the important features that characterise IWC’s pilot’s watches, such as resistance to negative pressure and magnetism.

And among the pair the “Stormtrooper” in white is the standout. It is also unique because steel can coated to achieve a similar green hue, something that is not possible with white, at least with the same bright tone. Besides being more eye-catching as colour, the white model calls to mind the quartet of “Inspiration4″ chronographs made for the astronauts who crewed a SpaceX commercial space flight last year. Those had an identical case but a blue dial painted to resemble outer space. After the astronauts returned to Earth, all four watches were sold at auction to benefit charity, leaving them out of reach.

One of the key features of the new chronographs is accessibility – they are regular production models with reasonable retail prices. While IWC’s fancy ceramic models are often limited editions, “Woodland” and “Lake Tahoe” join the catalogue as standard-production models, albeit with a cap on production of up to 1,000 pieces per year.

As for the watches themselves, I do have a few nits to pick. For one, I wish they were smaller. The case diameter of 44.5 mm is enormous, especially compared to the steel pilot’s chronograph that’s 41 mm. That said, the larger case is necessary in part due to the material, which is more robust when thicker and also requires a metal inner case to contain the movement.

And while some IWC pilot’s watches were overloaded with fighter jet elements, now they are completely missing. I miss some of the details found on past special-edition pilot’s watches, such as the fighter-jet counterweight on the central seconds of the “SFTI” chronograph. Though it did not invent the ceramic watch case, IWC was an early adopter of the material, having introduced a ceramic case as early as 1986 with the Da Vinci Perpetual Calendar ref. 3755 that was available in either black or white ceramic. IWC also created prototype ceramic cases in a variety of pastel colours in the 1980s, including blue, green, and even pink, though none of them every made it into production. The new chronographs are a belated followup to those 1980s prototypes. 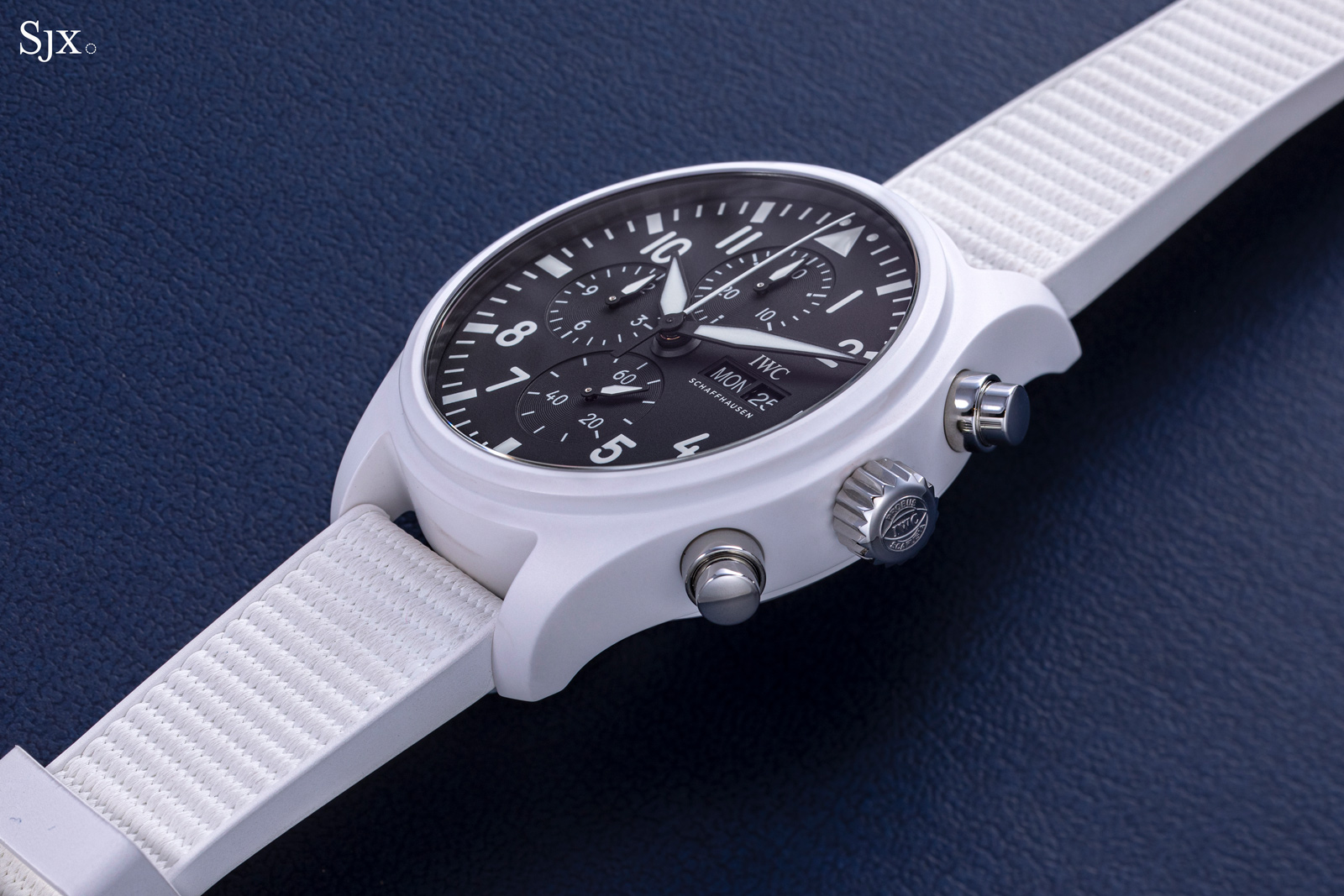 Both chronographs are largely identical, with some minor material differences that separate them.

The cases have the same profile with identical finishing of simple, uniform micro-blasting that creates a finely grained surface. I imagine the case will be even more appealing with more contrast on the surface finishing. One potential upgrade here would be polished bevels along the lugs, which are found on the steel case pilot’s chronograph.

That said, IWC finishes all its ceramic cases in this straightforward manner, in part due to cost constraints. Audemars Piguet boasts far more elaborate finishing on the cases and bracelets of its ceramic Royal Oak models, all of which cost several multiples of the typical IWC. 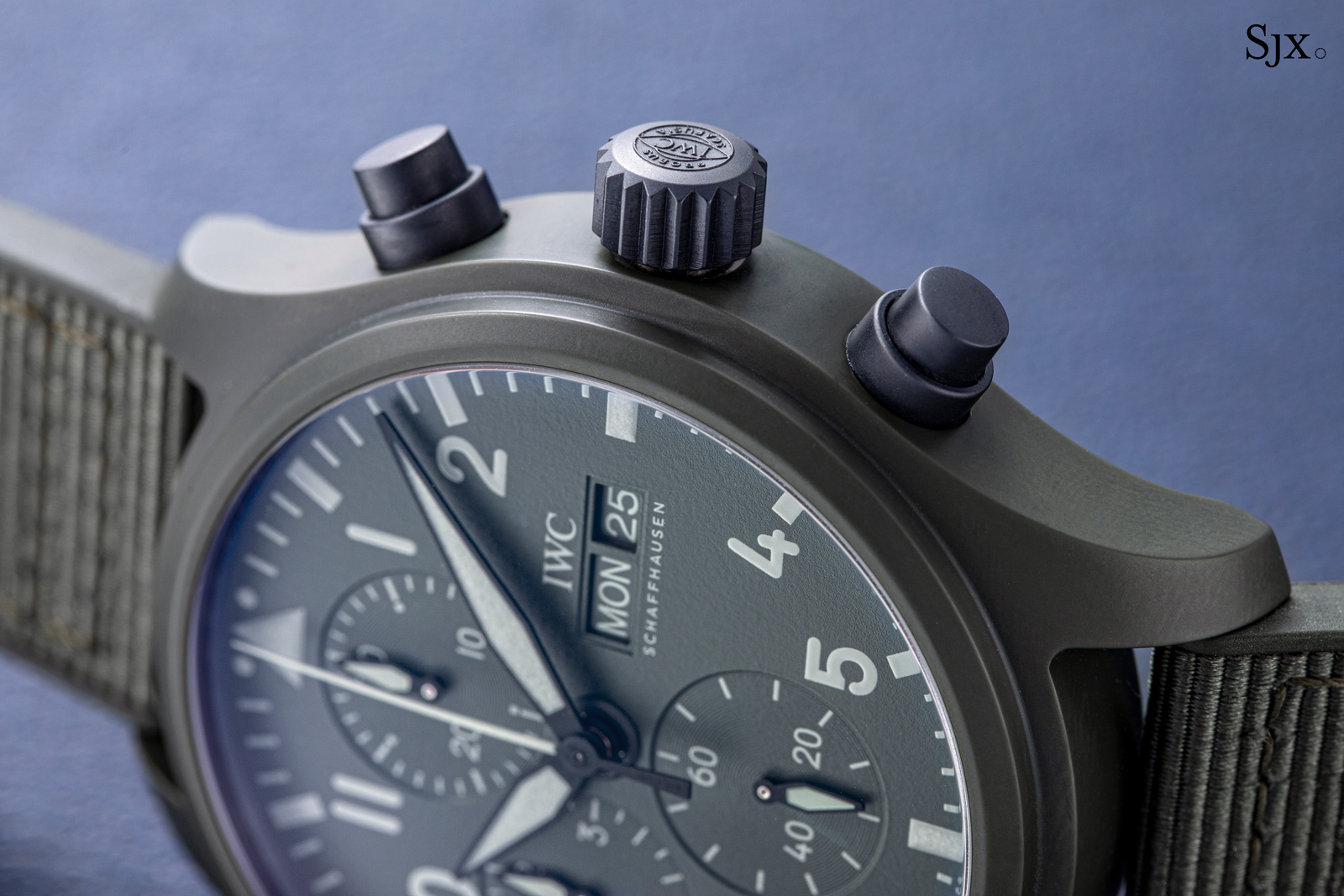 On both chronographs the screwed-in case back, as well as the crown and pushers, are not ceramic. That is the norm for ceramic watches since the material cannot withstand torsional stress (as would happen when a case back is screwed into a case). As a result, ceramic is usually used only for static components.

Interestingly, these components are in different materials for each of the new chronographs. The “Lake Tahoe” has its case back in titanium, while the “Woodland” has the back in Ceratanium. Used for the entire case in IWC’s top-of-the-line pilot’s watches like the Tribute to 3705, material is essentially titanium that’s been baked in an oven to form a ceramic coating over its surface that gives it better scratch resistance as well as a charcoal finish. Heating the titanium case in a kiln causes a chemical process that forms a ceramic layer on the case surface, resulting in Ceratanium. Image – IWC 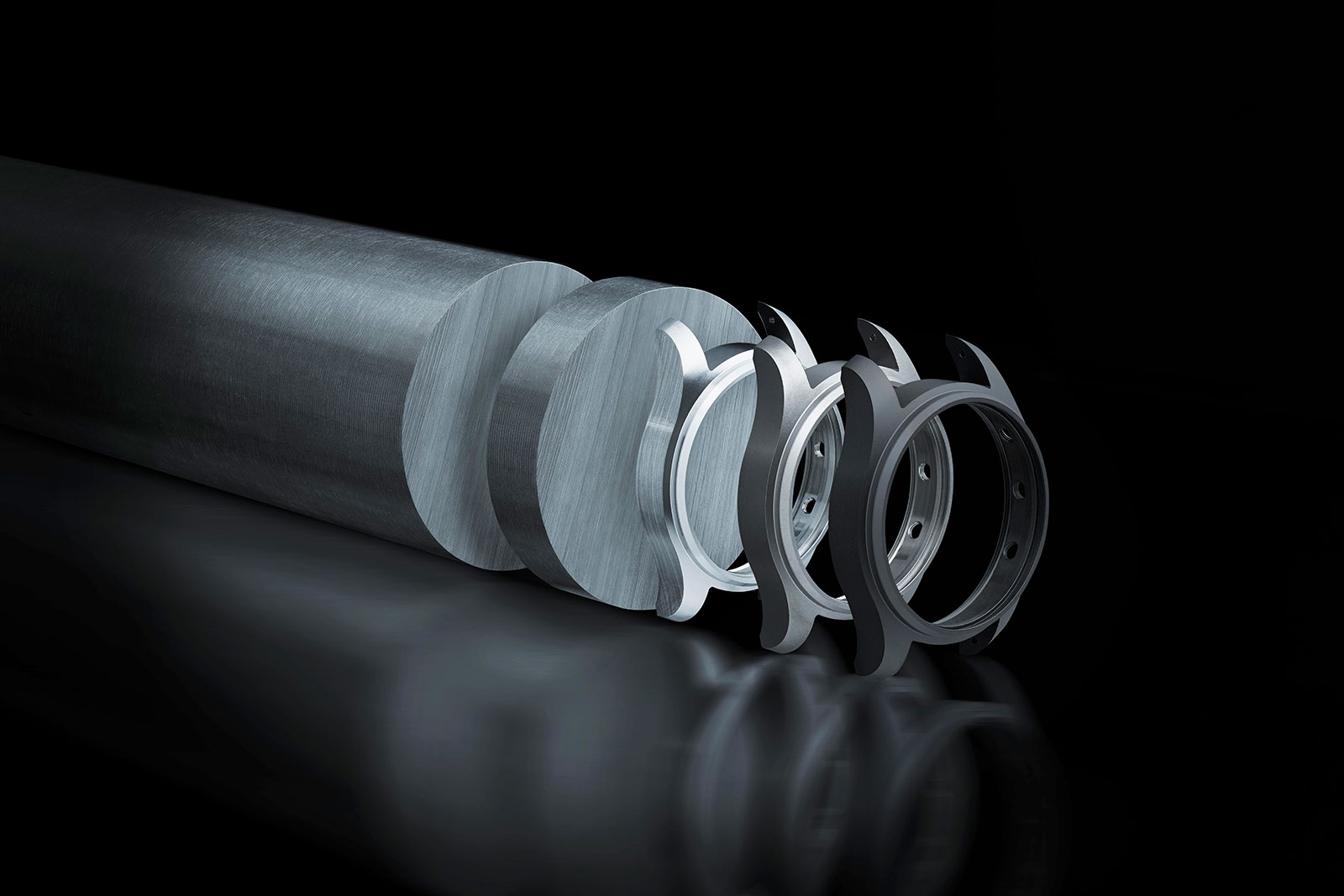 From bar of titanium to finish case in Ceratanium. Image – IWC

While the differences in material is a matter of aesthetics rather than function – they were chosen to match the colours of the case and dial – Ceratanium is certainly more interesting of the two (and also slightly more costly, though both chronographs are priced identically). Ceratanium for the case back, crown, and pushers

That said, because the metal components of “Lake Tahoe” are steel, it gets a steel folding clasp. The upside of the steel folding clasp is the appeal of its contrasting brushed and polished surfaces, a surprising level of detail on a simple part that gives it a refined feel.

The “Woodland”, in contrast, gets a Ceratanium pin buckle to match the case. It’s functional but lacks the polished refinement of the steel folding clasp. 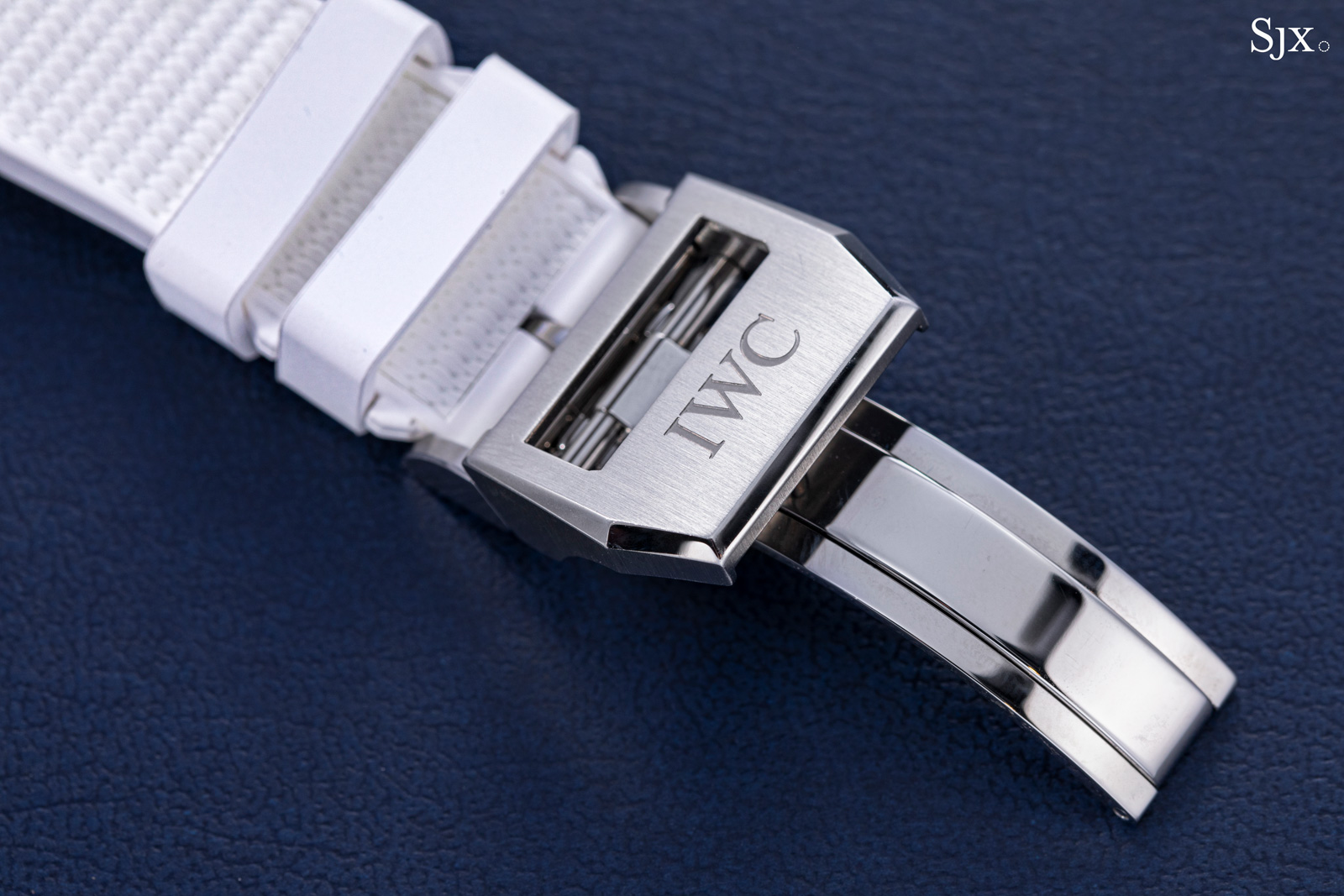 Like the ceramic case that is offered in two guises, the dials are executed in colours to match. “Lake Tahoe” keeps it simple and high contrast – the matte white ceramic case is matched with a matte black dial featuring white markings. It’s probably too white and stark for actual use in a cockpit, but it sure looks cool.

“Woodland”, on the other hand, is on point for a military-inspired watch with its green-on-green palette, especially since both the case and dial are in a muted, matte finish that brings to mind olive-drab fatigues. 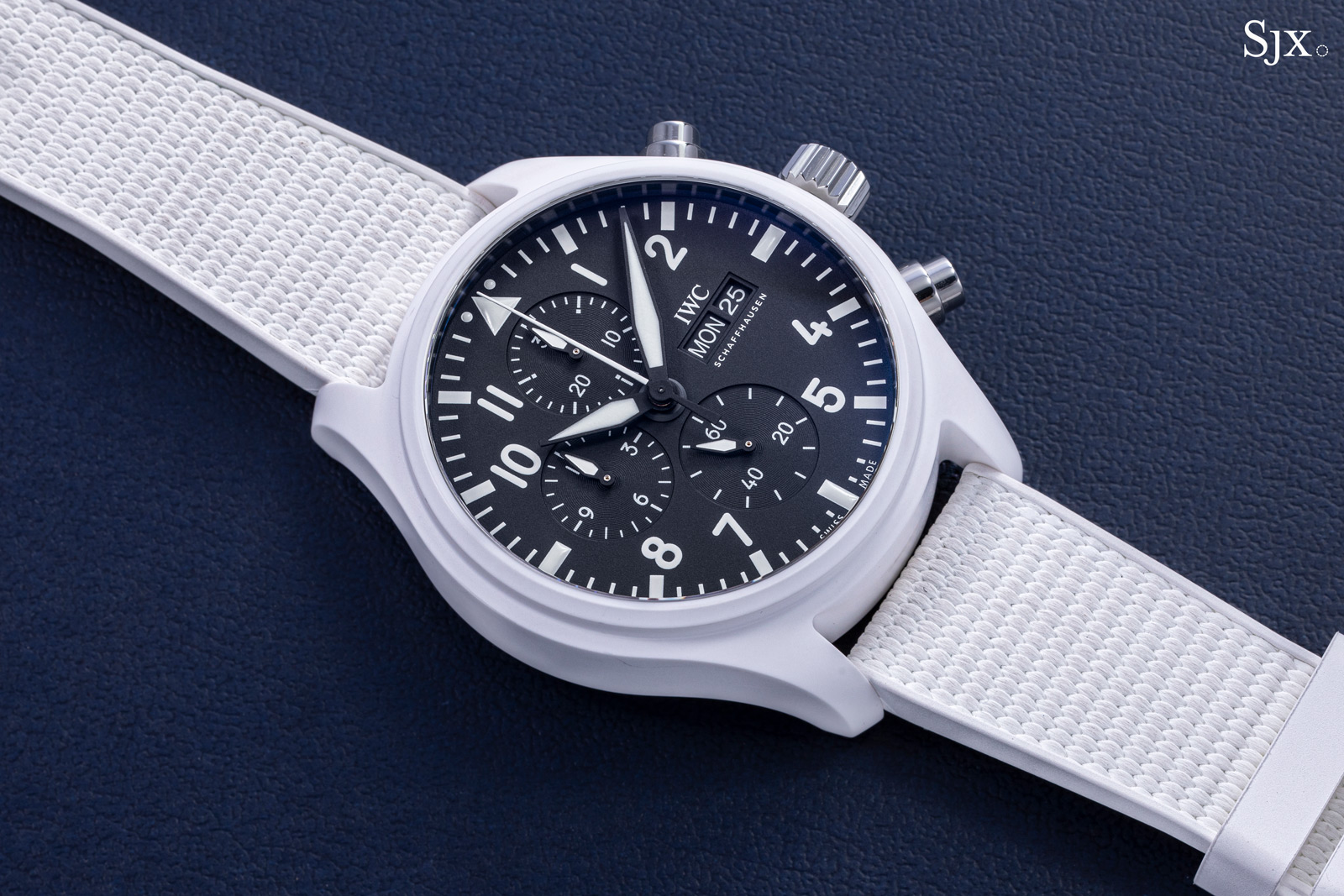 As with all IWC Pilot’s watches, legibility is excellent, thanks to hour and minute hands that are large and luminous. The stark contrast between the dial and its markings also help readability.

Modelled on the lozenge hands found on the B-Uhr IWC supplied to the German airforce during the Second World War, the hands are wide and functional, conveying a sense of confidence that suits the instrument-inspired aesthetic perfectly. I find the hands to be one of the best in terms of design and execution among pilot’s watches in this price segment. Both dials are finished in the same manner, with a finely-grained texture on the main dial and stamped, concentric guilloche on the counters. The counters are slightly sunken, as is the date and day frame, which give the dial more visual depth. The dial layout on both is similar to that of the smaller, 41 mm Pilot’s Chronograph, but sharp-eyed enthusiasts will notice the chronograph counters sitting more closely around the central axis. That stems from the larger case diameter relative to the movement.

Shrinking the case diameter would help with the proportions but as noted above, IWC’s ceramic cases are typically larger than their counterparts in steel. A wider bezel would also reduce the dial size, but that would come at the expense of the signature Pilot’s Watch aesthetic, since the thin bezel is a key characteristic of the family. Fortunately the dial uses oversized minute track and Arabic numerals similarly modelled on the B-Uhr dial. They fill up the space on the dial, leaving it looking balanced.

At the same time, the day and date display sandwiched between the two lines of the IWC logo is an appealing and practical detail. Found on the first-generation Pilot’s Chronograph from the 1990s, the calendar display is one of my favourite details in the brand’s aviation chronographs. At the same time, it helps disguise the position of the date window, which sits at a distance from the edge of the dial. Inside the watch is a movement that lives up to the robust, functional qualities of the external components. It’s one of IWC’s latest-generation, in-house movements, the cal. 69380.

For starters, the cal. 69380 preserves the same dial layout, with counters at six, nine, and 12 along with the day and date windows opposite. The layout has been a fixture of IWC’s pilot’s chronographs since the beginning, making it an important element of the model’s identity. The movement is hidden under a solid back in the ceramic chronographs, but the steel version of the Pilot’s chronograph has a display back that reveals the near-identical calibre

But the cal. 69000 family is fundamentally different from the 7750, with a completely different arrangement for the gear train. That can be observed from from the location of the seconds hand, which is at six o’clock. Just below it is the fourth wheel that drives the seconds. In the 7750, the running second is at nine instead. A longish pivot with wheels at both ends, the oscillating pinion is connected to the fourth wheel on one side, and to the chronograph seconds wheel on the other. This is less complex than the horizontal clutch and also takes up less space, making room for the automatic winding module on top. The movement is equipped with a column wheel

Instead of the cam found in the 7750, the cal. 69380 has a column wheel, giving it a more tactile feel when operating the chronograph. The winding is also improved with a simple, high-efficiency pawl-based system that’s similar to Seiko’s Magic Lever.

But perhaps the most interesting upgrade is in the escapement. Both the pallet lever and escape wheel are fabricated via LIGA, a high-tech additive manufacturing process that enables precise shaping, allowing them to be skeletonised for weight savings. The lighter parts means more of energy stored in the barrel can be utilised power the oscillations of the balance wheel, ensuring more stable timekeeping.

Executed in appealing colours and excellent materials, the new ceramic Pilot’s chronograph is equipped with a smartly engineered, workhorse movement. Though the case diameter might be too large for some, it is an excellent option for collectors who fancy the design of IWC’s pilot’s watches but find the base models in steel too mundane.

Availability: At IWC boutiques and authorised retailers
Price: US$10,700, or 15,900 Singapore dollars