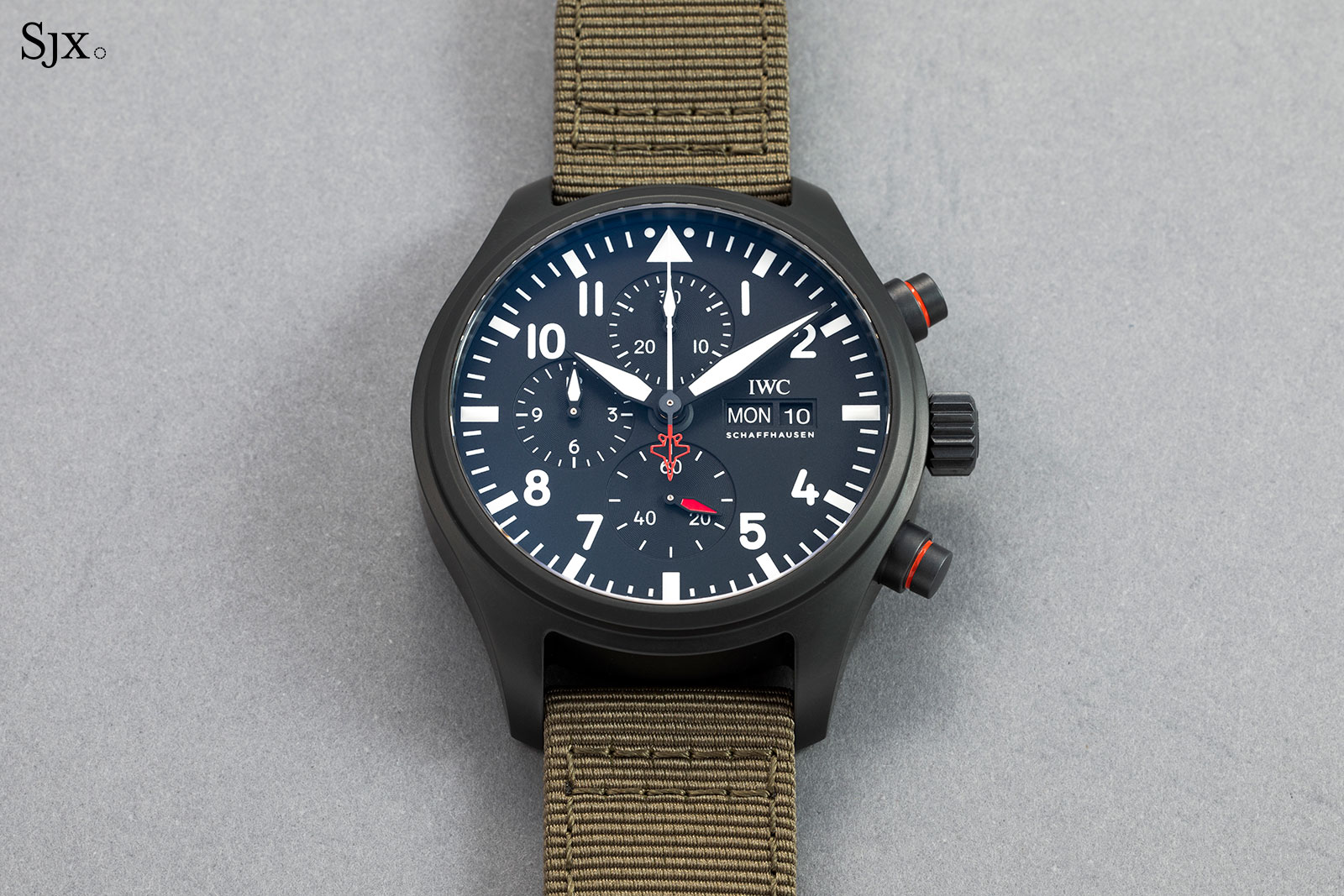 IWC is not the only maker of pilot’s watches, but it is perhaps the best known. The brand’s line up of aviator’s timepieces is all encompassing, from basic three-handers to chronographs, and paradoxically for an aviation instrument, even perpetual calendars.

But the latest pilot’s offering is straightforward. The IWC Pilot’s Watch Chronograph Top Gun “SFTI” is a chronograph with a ceramic case, but its pushers, crown, and case back are Ceratanium, which is essentially titanium coated with ceramic. And more notably, it’s a limited edition of 1,500 watches that will be sold publicly, but is based on a similar watch created in 2018 that is available only to graduates of the United States Navy Strike Fighter Tactics Instructor (SFTI) programme, better known as TOPGUN. 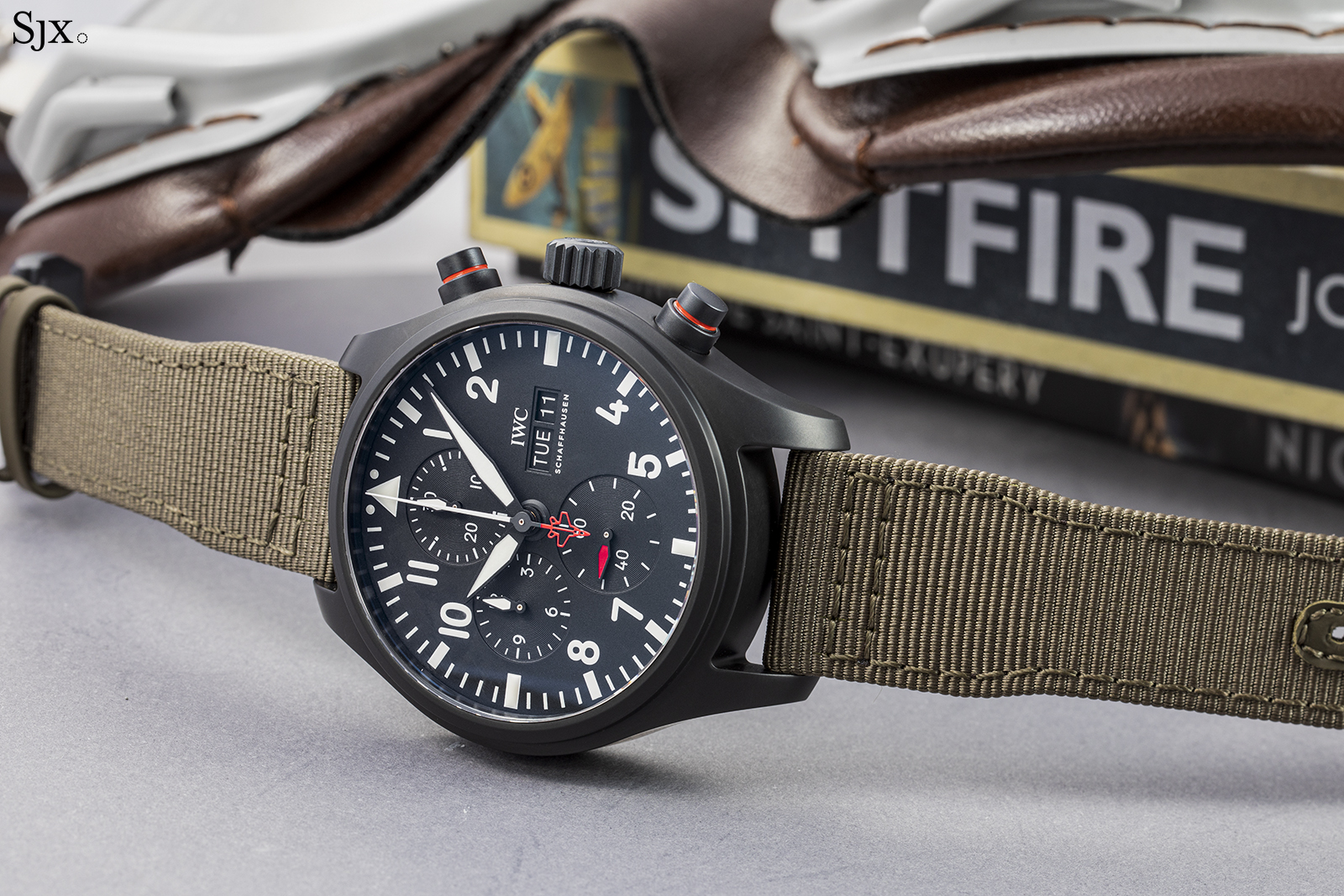 IWC is not short on pilot’s watches, even special or limited-edition pilot’s watches. The brand has rolled out many, many iterations, variations, and editions. But the Pilot’s Watch collection is a bestseller so that’s commercially inevitable.

But that doesn’t take away from the intrinsic appeal of a pilot’s watch. And IWC has been especially successful at tweaking the no-nonsense design to make it interesting in a way that appeals to the boy in every man. Some of the appeal isn’t sophisticated, but it is there – like the red fighter jet silhouette as the seconds hand counterweight. 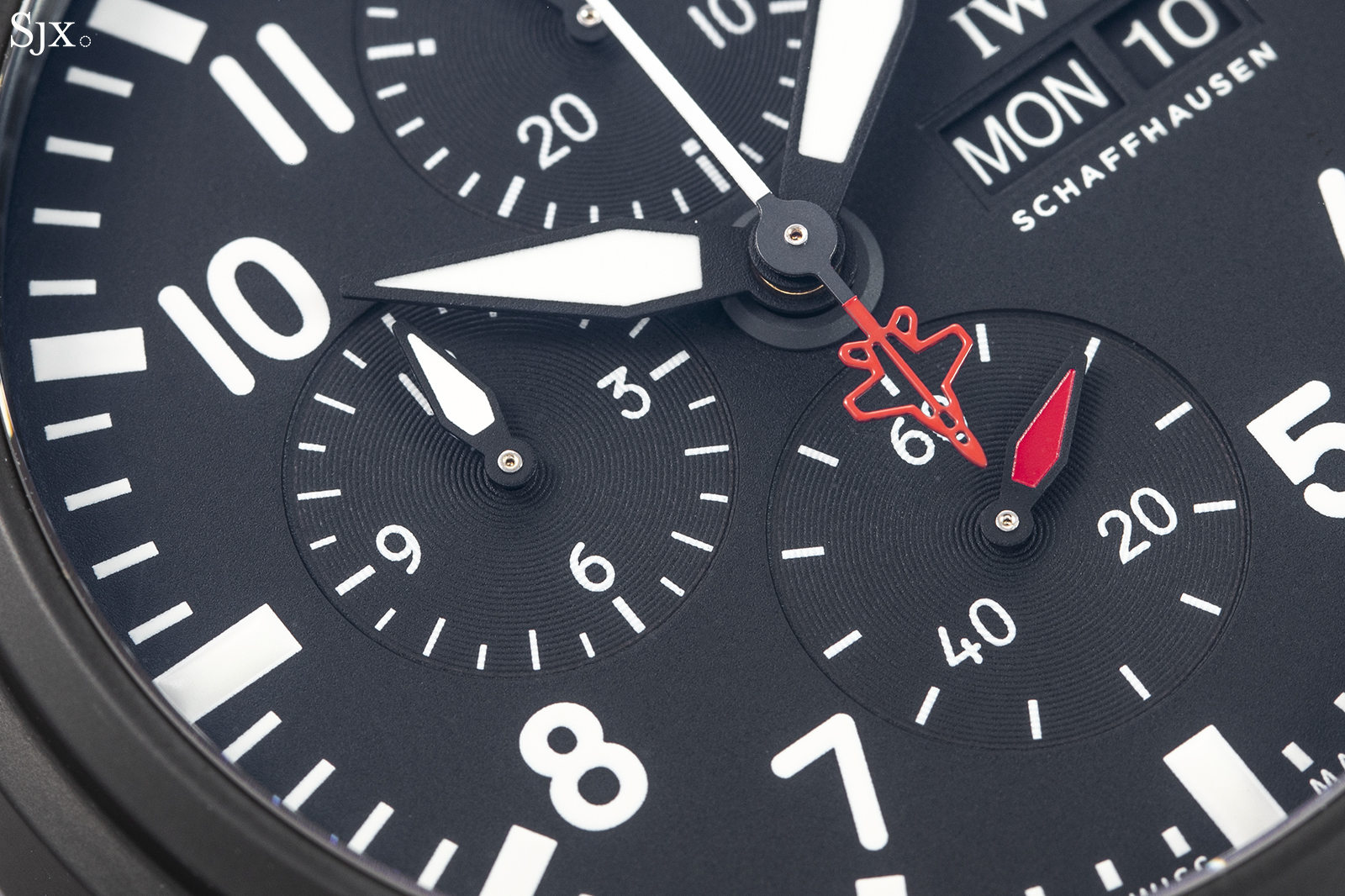 The base-model IWC Pilot’s Chronograph in steel has that appeal, and in black ceramic case, it looks even better. The addition of the Ceratanium bits on the SFTI version also complete the all-black case. Earlier generations of ceramic pilot’s chronographs had naturally-grey titanium crowns and pushers that contrasted again the black case. 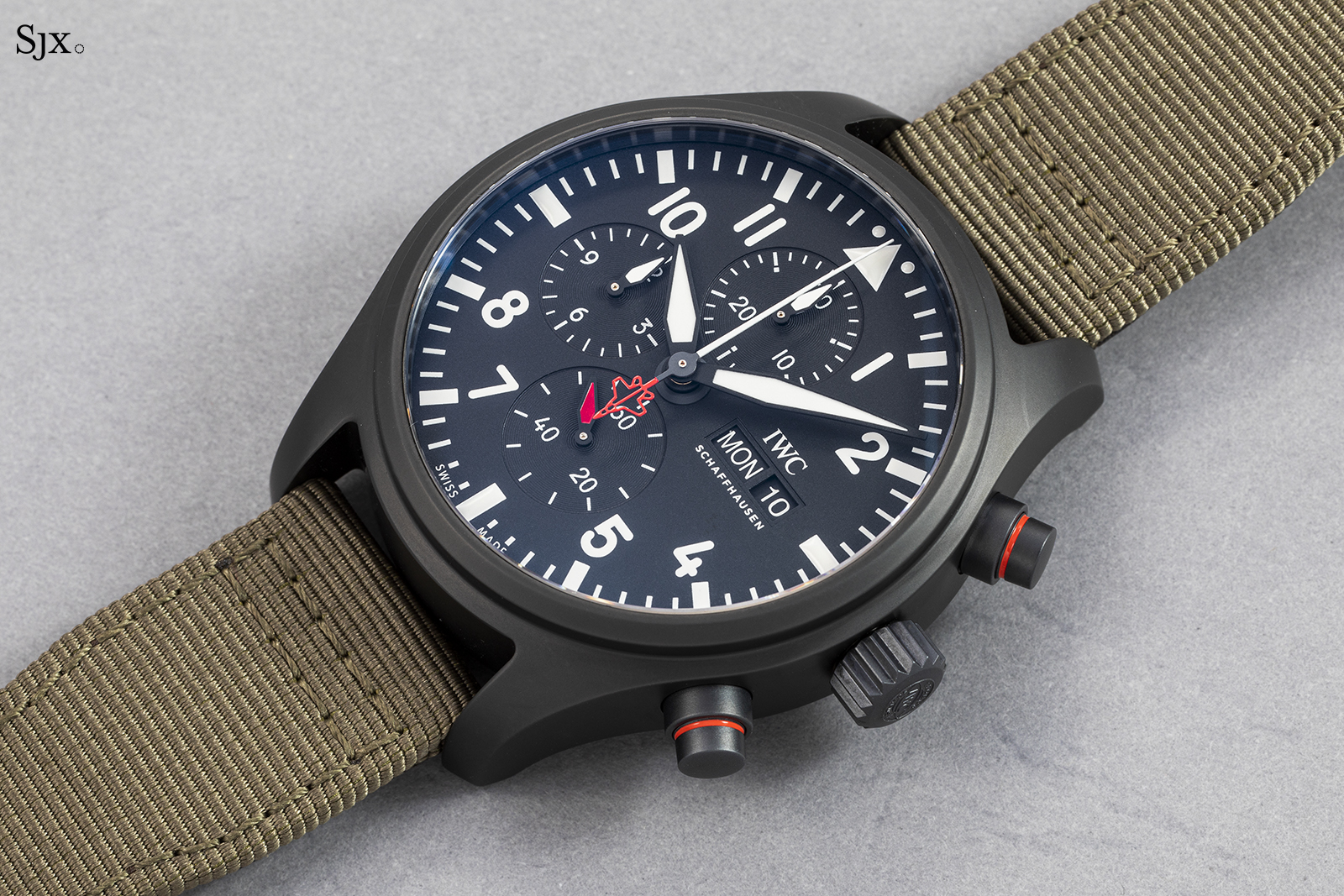 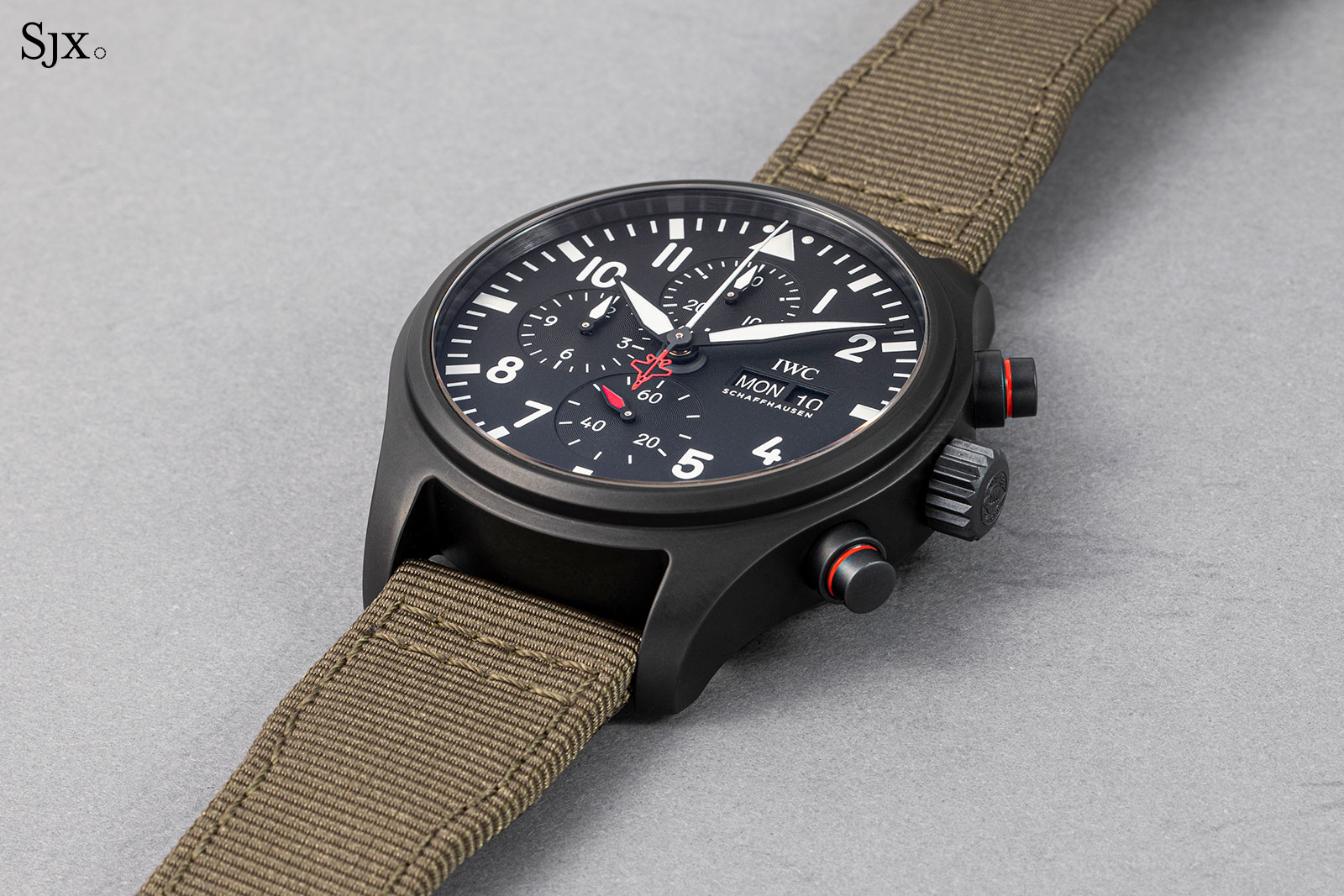 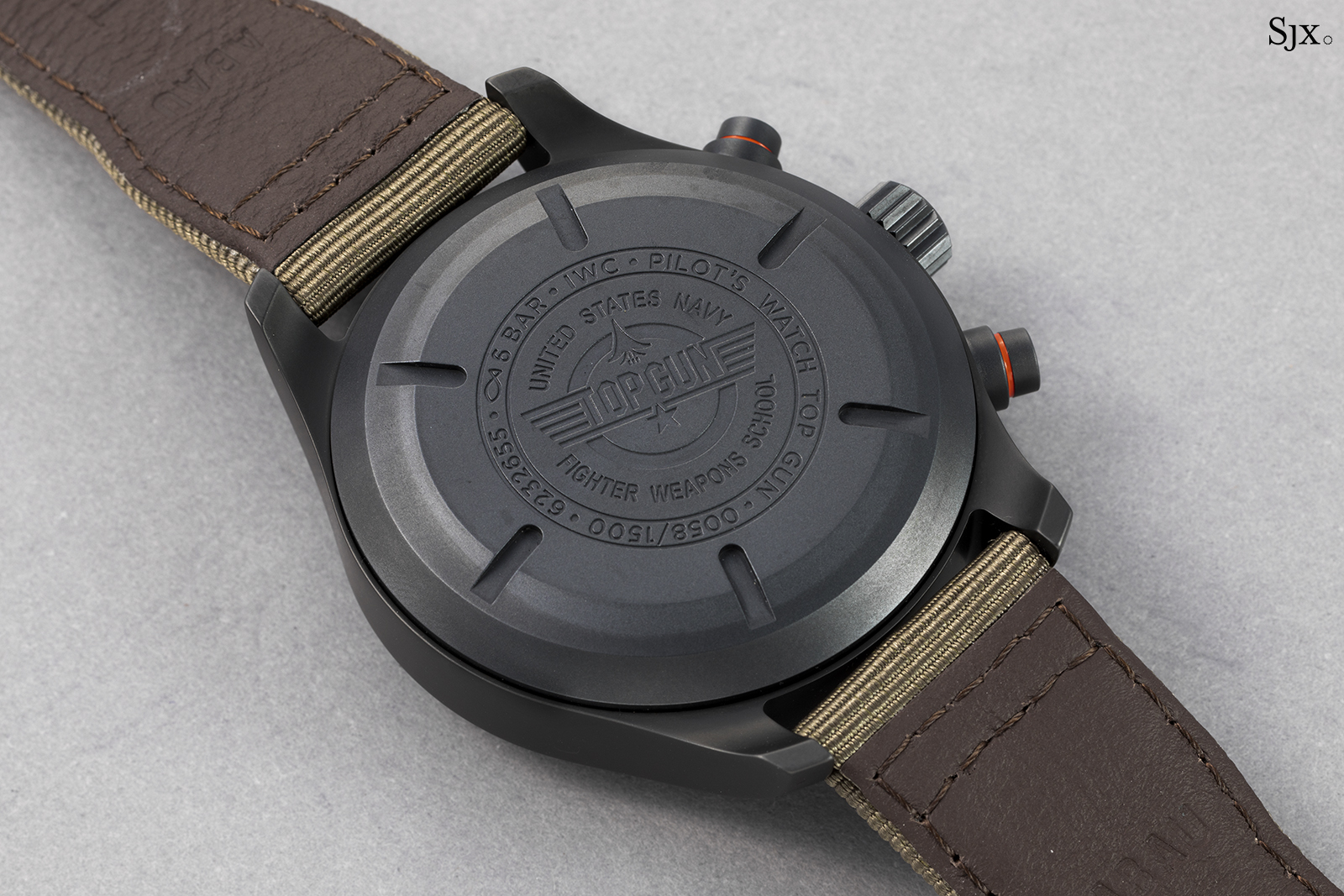 While the differences between the SFTI edition and standard Top Gun chronograph aren’t major, the Ceratanium parts are a nice touch. More significant is the fact that this is modelled on the watch that can only be purchased by graduates of the United States Navy Fighter Weapons School – a little bit of the glamour of a naval aviator has no doubt rubbed off on the watch.

And the premium demanded by the SFTI edition is significant but reasonable: its retail price is US$10,000, which is 17% more than the regular production variant. 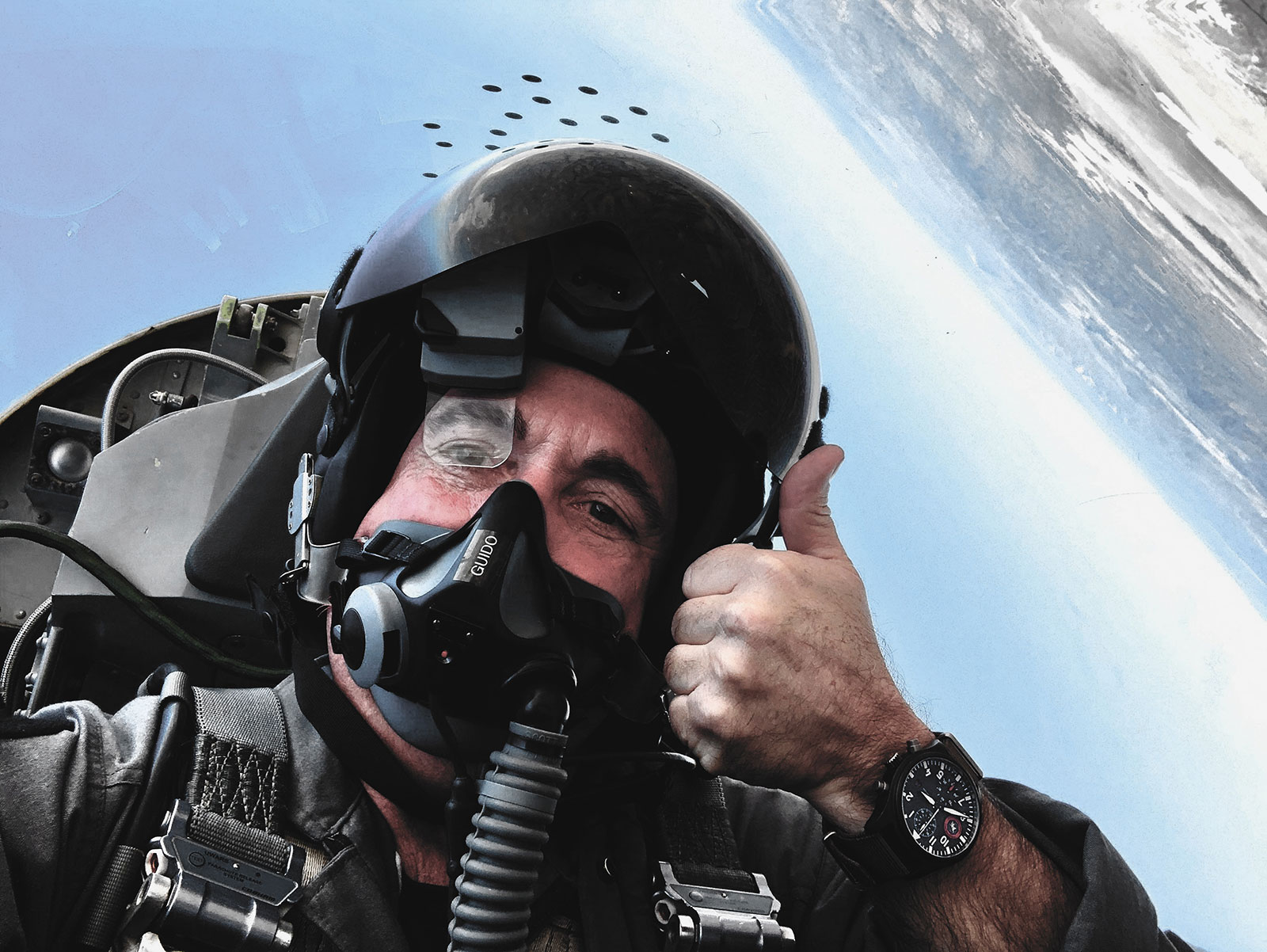 Jim DiMatteo, a retired US Navy captain who’s now an IWC “friend of the brand”, with the graduate-only edition on his wrist. Photo – IWC 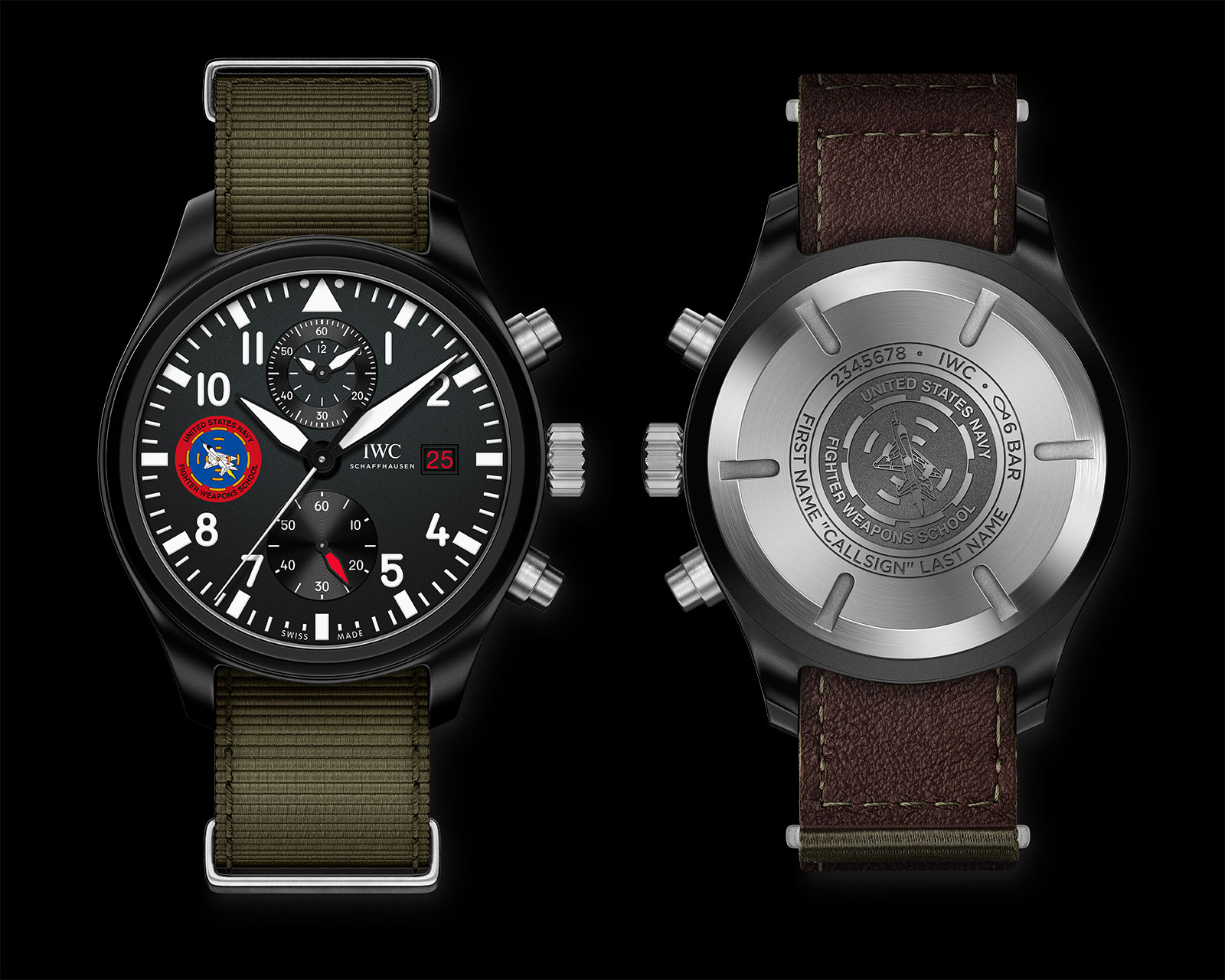 Launched in 2007, the Top Gun collection takes its name from the US Navy training course for fighter pilot instructors, an ordinarily obscure military programme was made world famous by the 1986 movie starring Tom Cruise. Now a centrepiece of the IWC Pilot’s Watch line up, the Top Gun watches started with the Double Chronograph ref. 3799 with a ceramic case. It has since evolved into the Double Chronograph in Ceratanium that was launched last year. 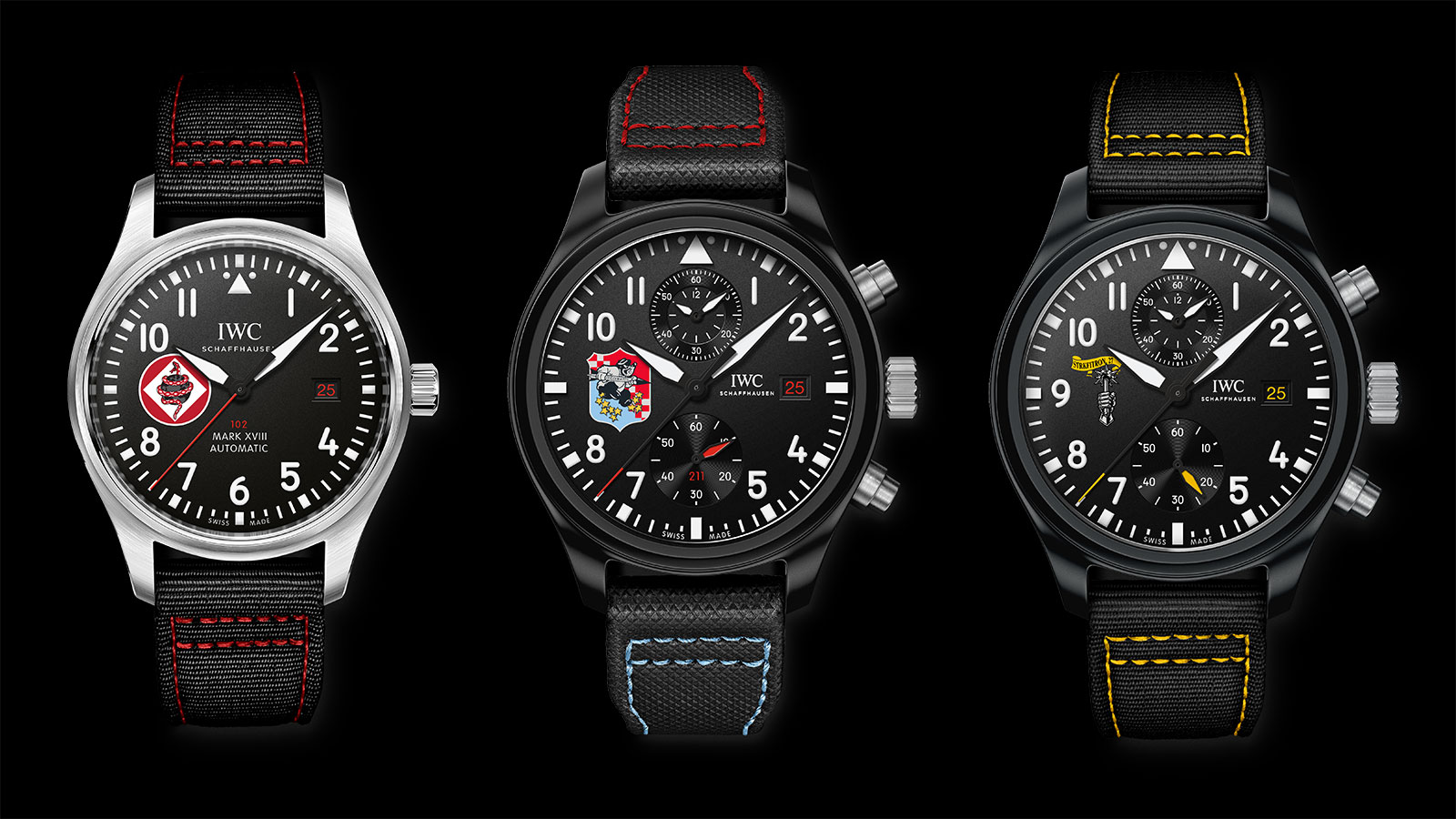 The SFTI edition remains largely similar to the regular-production Top Gun chronograph, save for a few minor changes in colour. And it is distinguished from the watch available to TOPGUN graduates at nine o’clock. While the civilian SFTI edition has the hour register at nine, the actual TOPGUN watch has the programme’s emblem in its place, since fighter pilots presumably have no need to record elapsed hours. 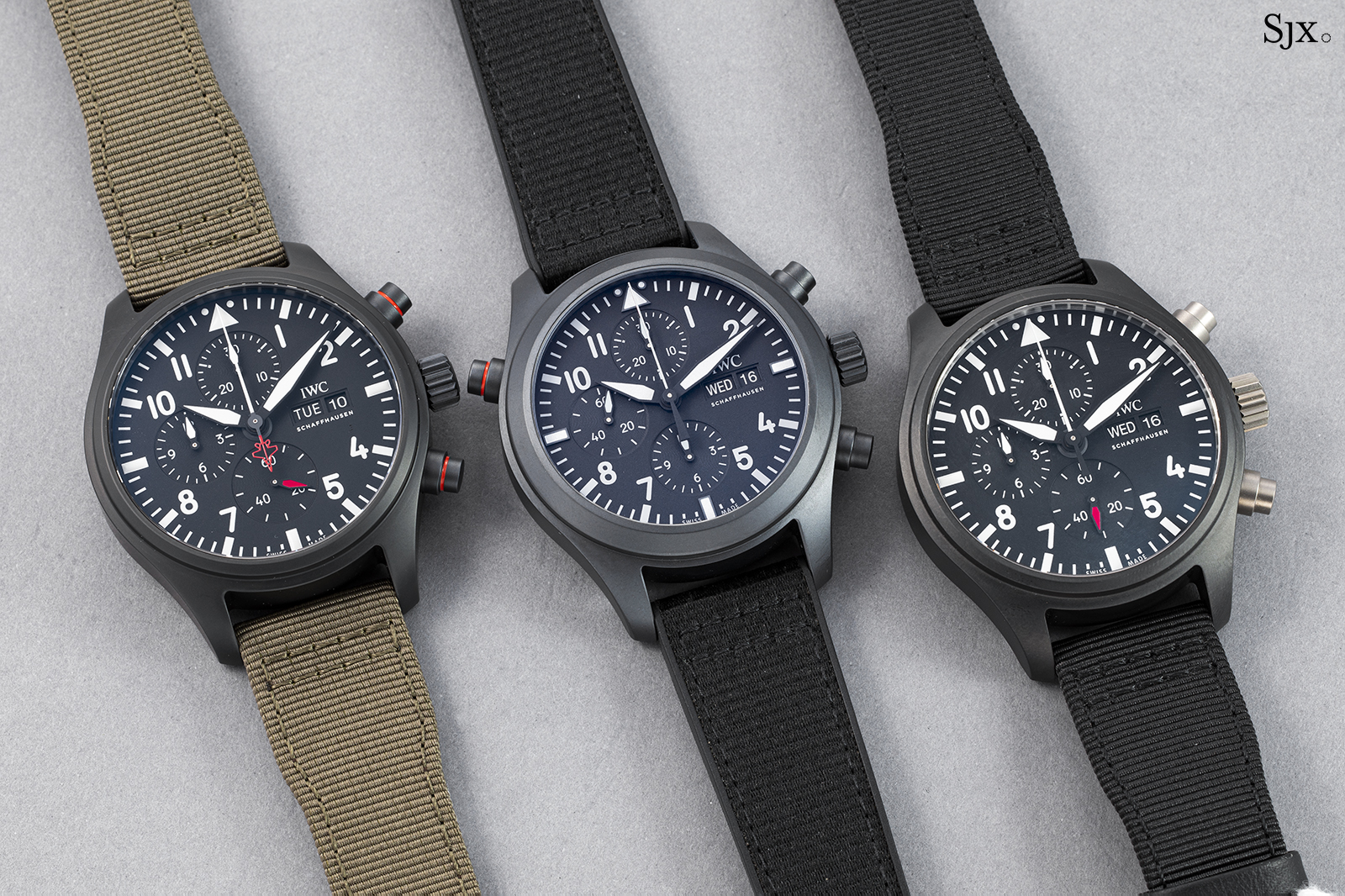 From left: The SFTI edition, the Double Chronograph Top Gun in Ceratanium, and the standard Pilot’s Chronograph

The SFTI edition gets red rings around the base of each pusher, which have no functional purpose but do look good, especially since they pick up on the red accents on the dial. 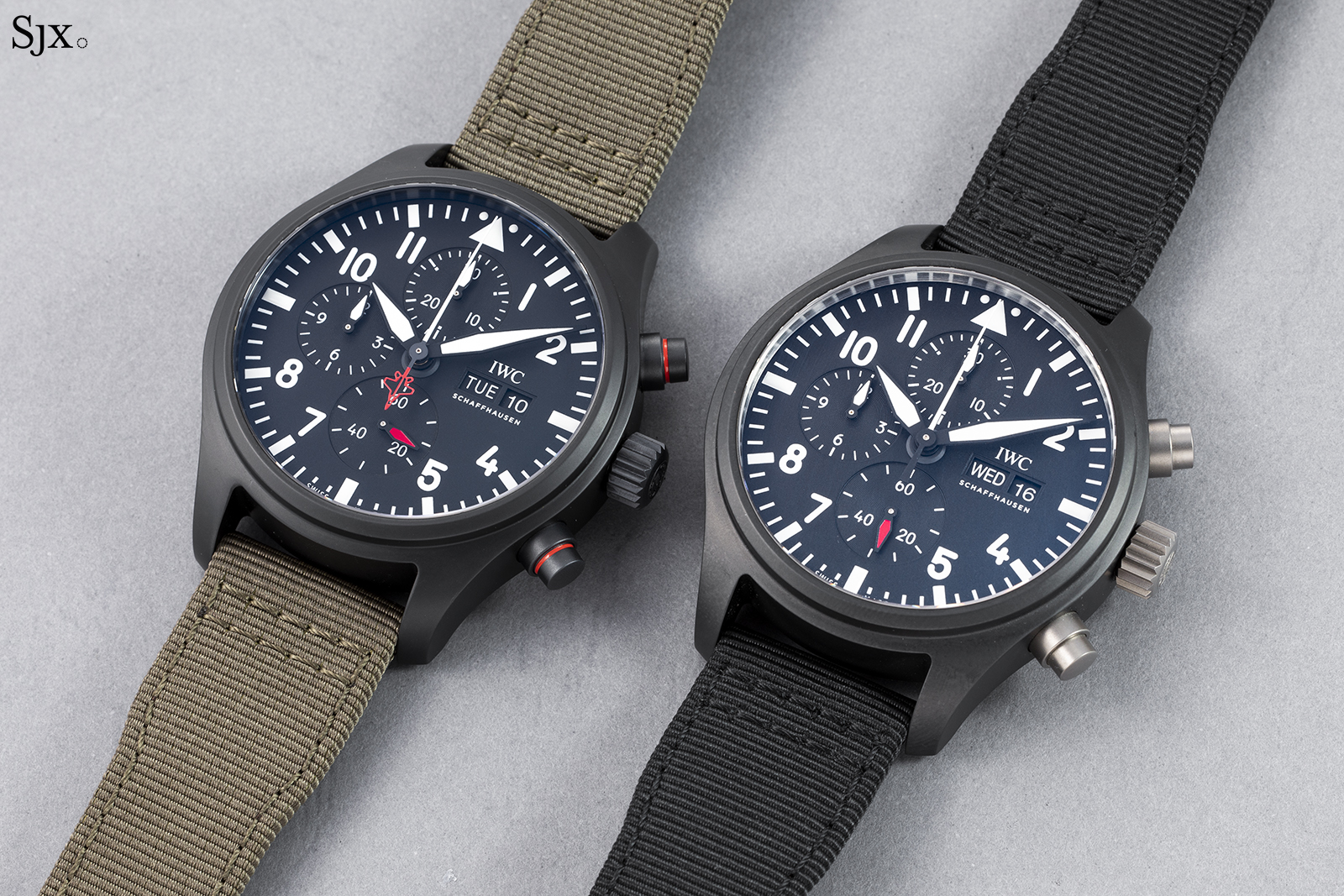 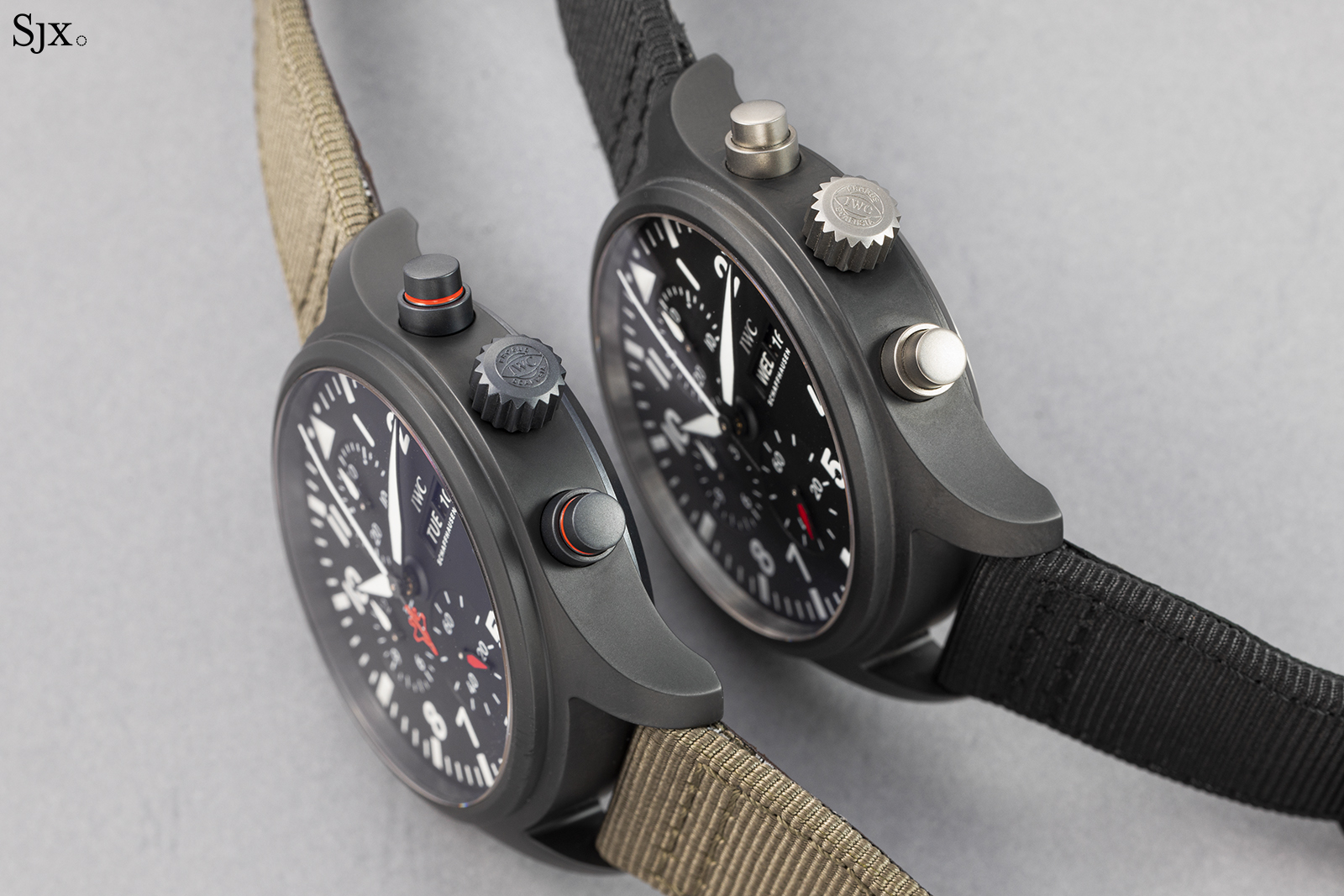 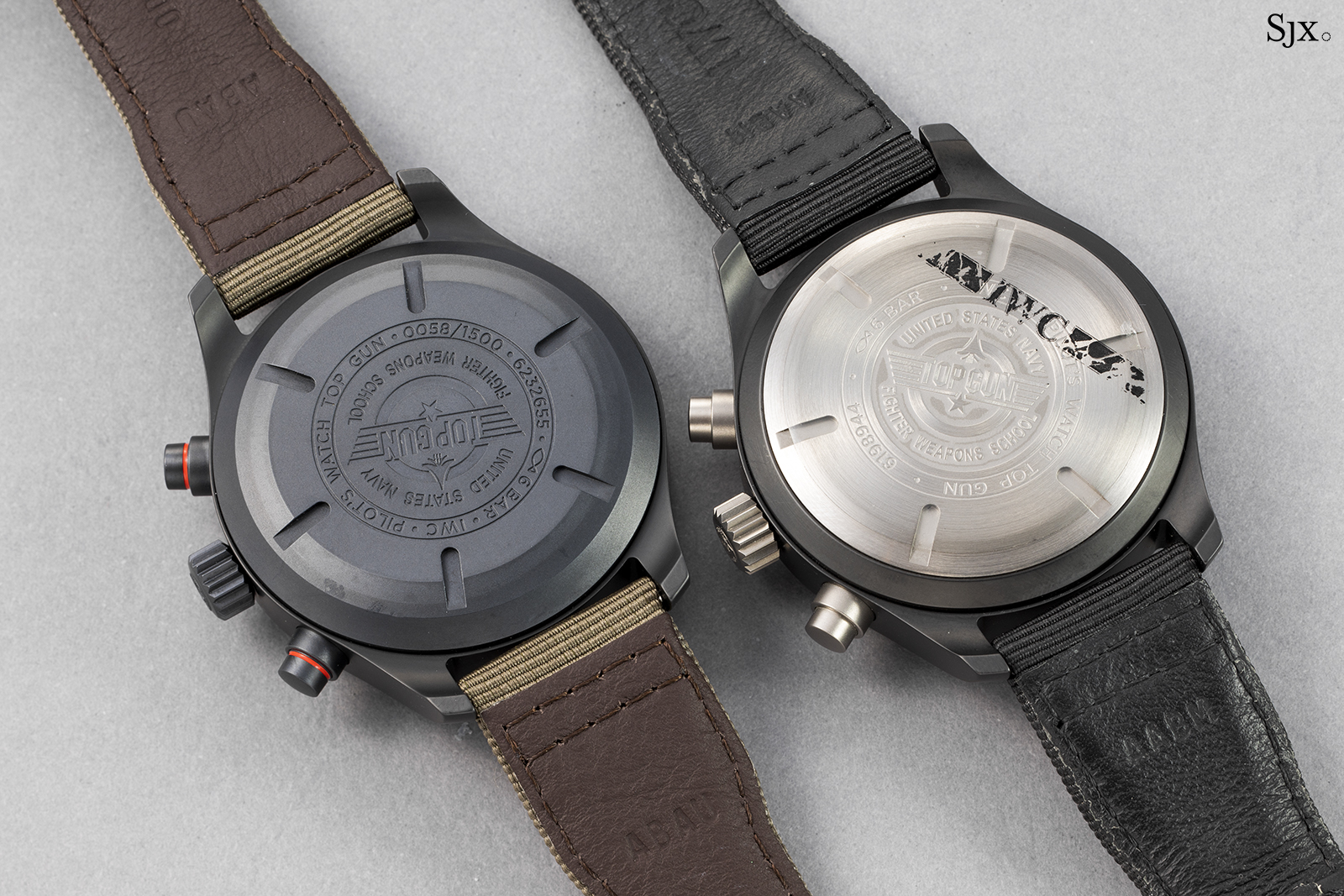 Other than colours, the case architecture and dial layout of the SFTI are identical as those on the regular-production chronograph.

That means a simple, no-frills ceramic case that contains an inner titanium case that the case back screws into (since it cannot screw directly onto ceramic, a material that cannot withstand torsional fore). The ceramic is matte, smooth, and looks at home on military-style watch, though it has to be pointed out that ceramic is more brittle than metal. While it is scratch resistant, ceramic can chip or crack with extreme force, whereas a metal alloy case would dent or deform. 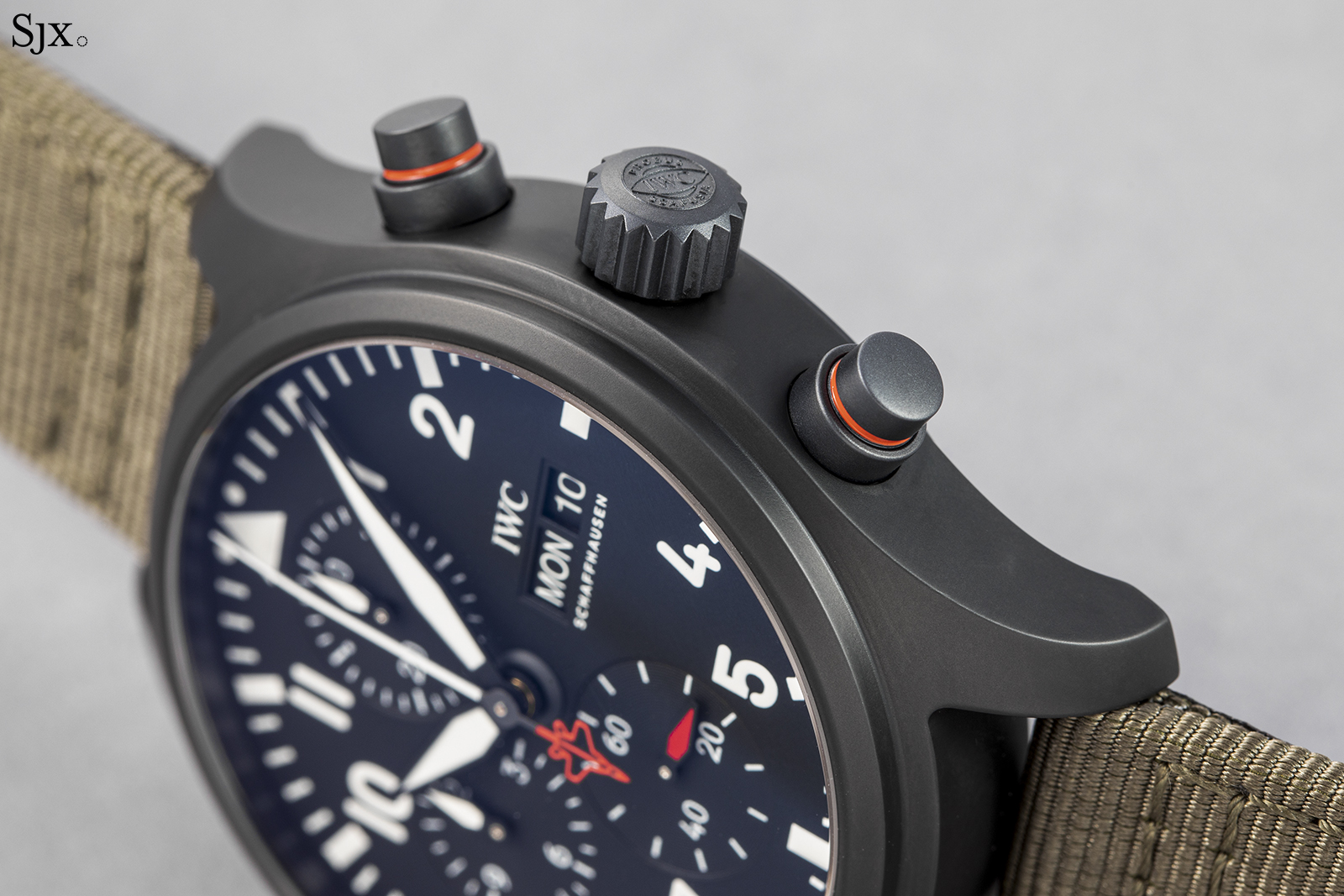 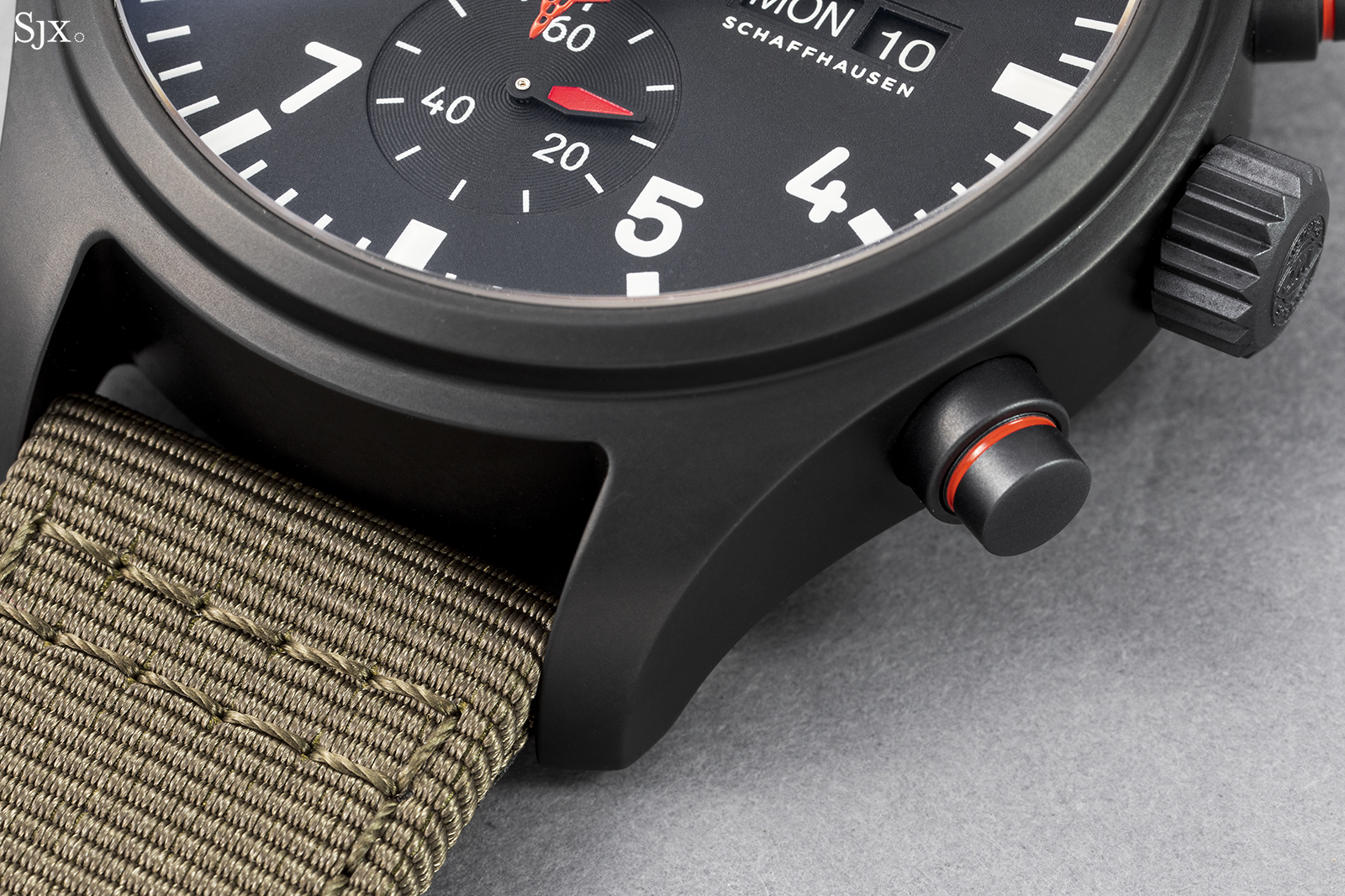 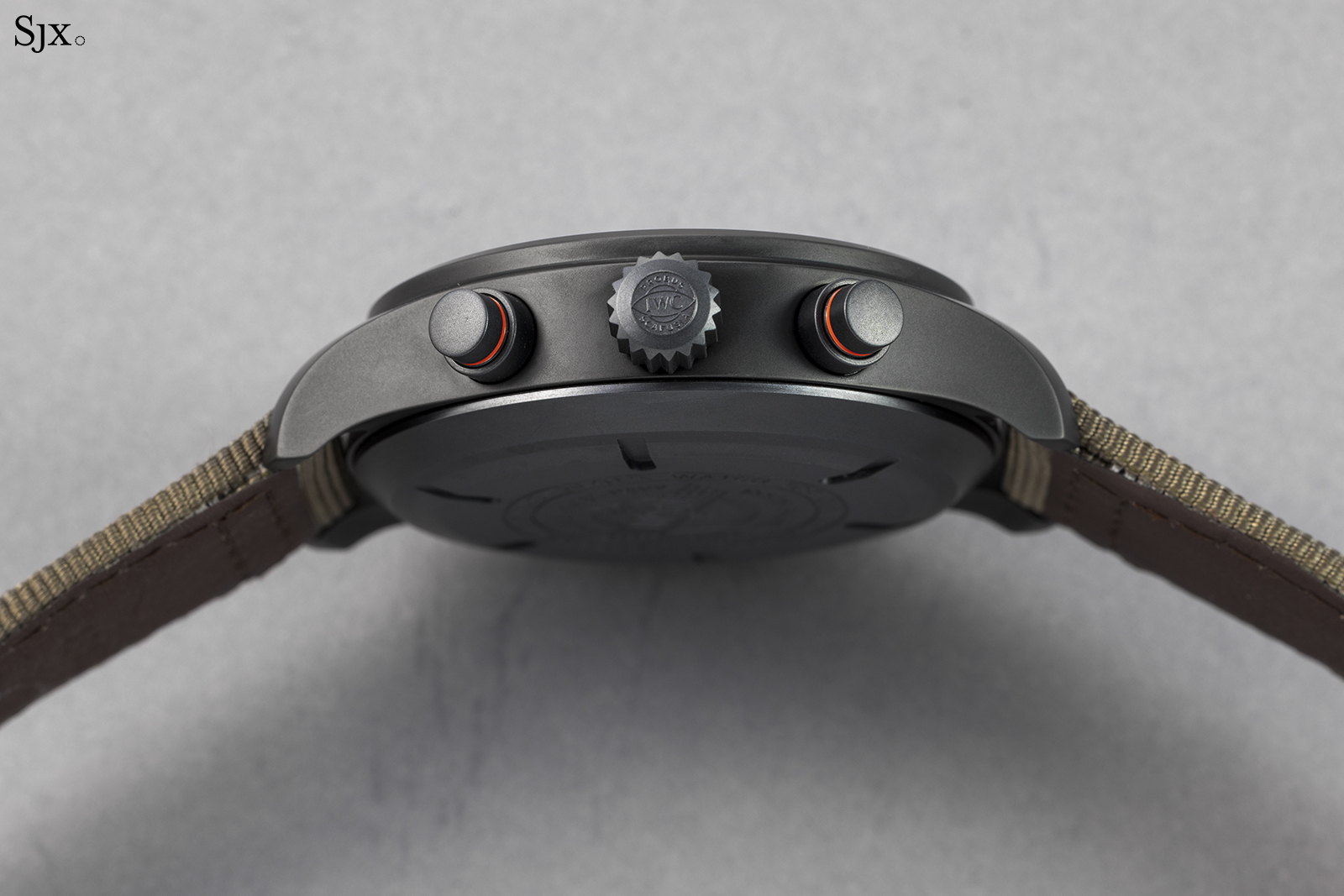 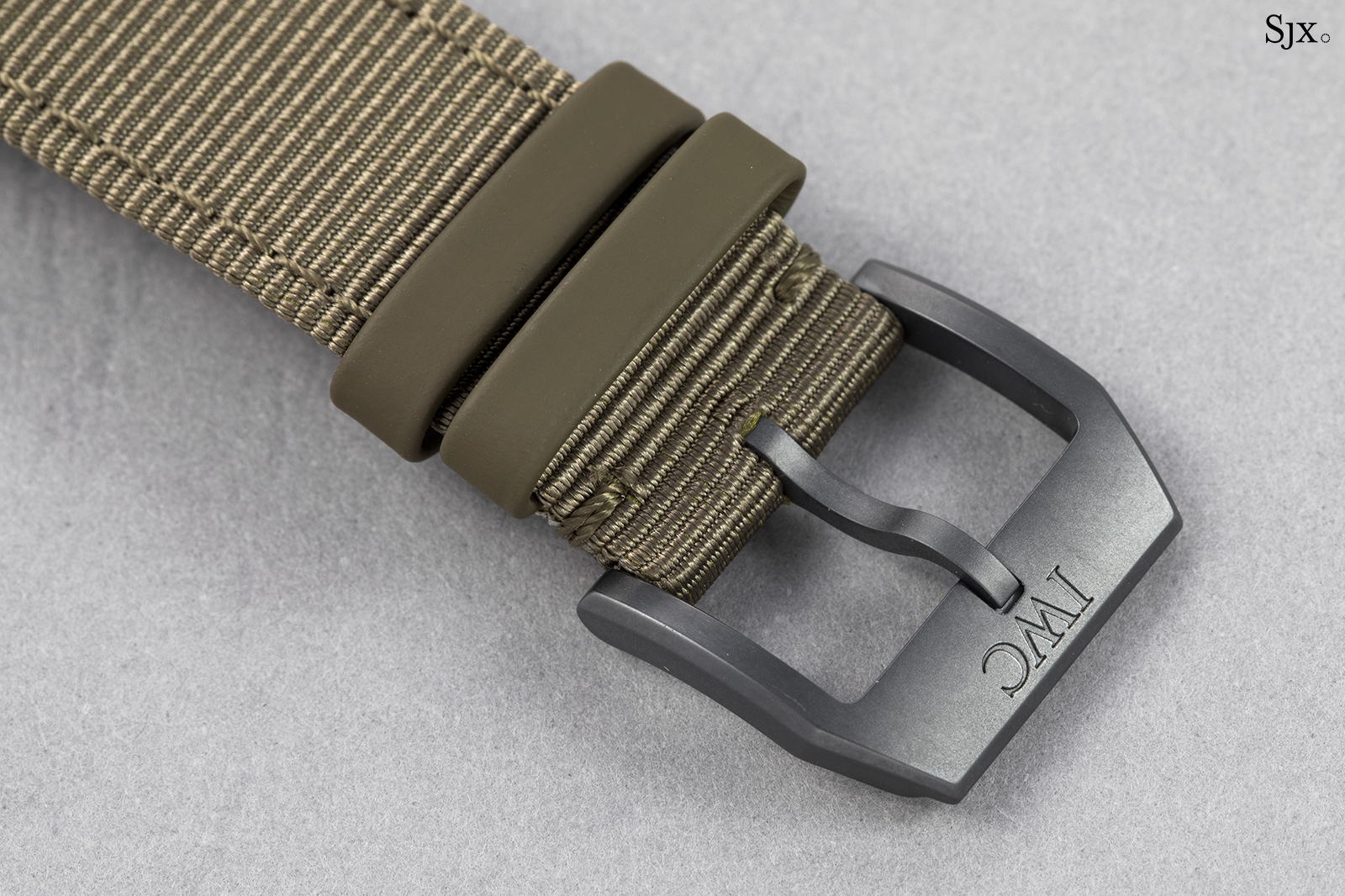 And a Ceratanium buckle

Inspired by the dial of the Beobachtungsuhr, or “observation watch”, which IWC produced for the Second World War Luftwaffe, the SFTI edition is simple, crisp, and easily legible, like the rest of the brand’s pilot’s watches. The jet-shaped counterweight is a little bit of a gimmick, but because it’s open-worked, it is surprisingly subtle. 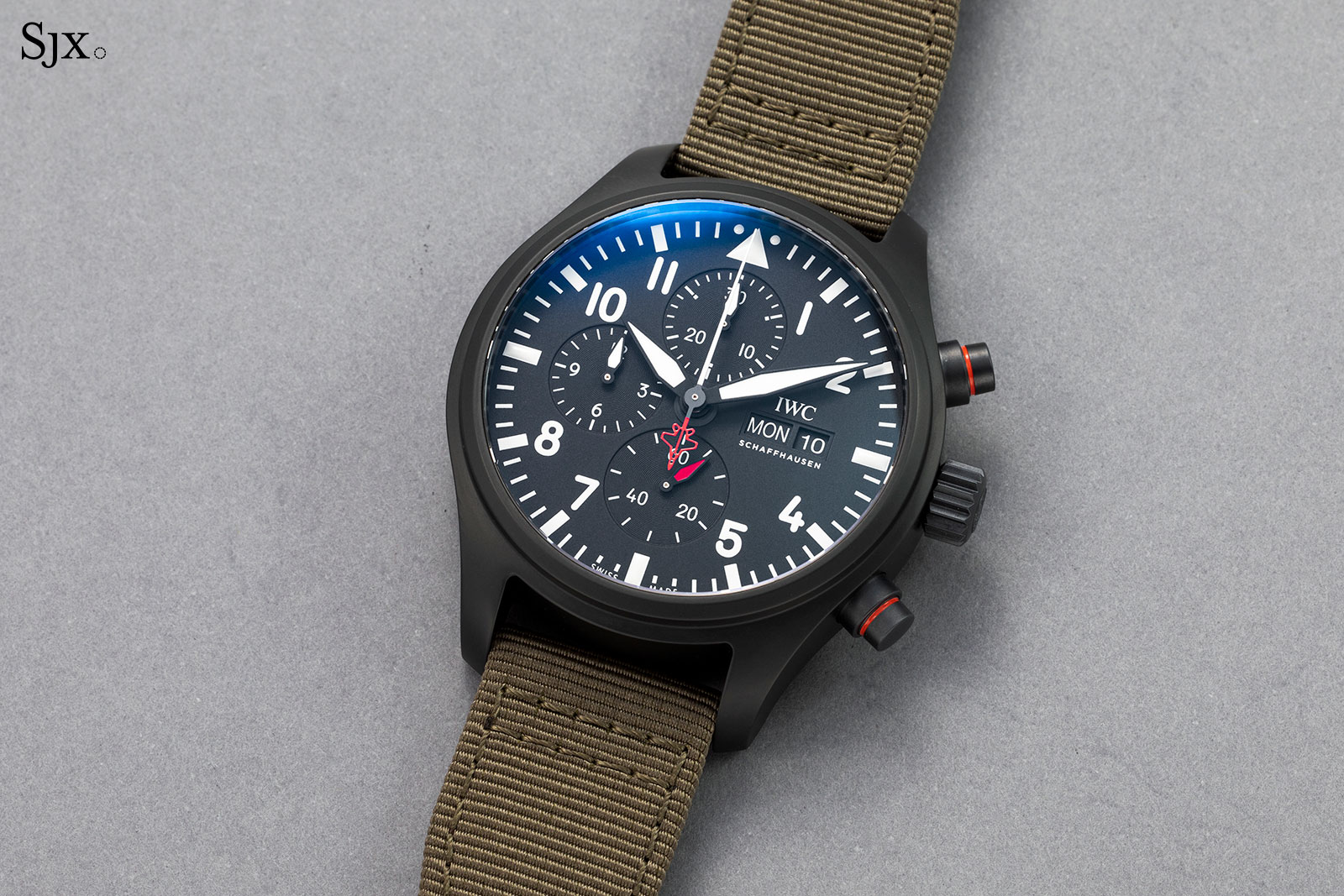 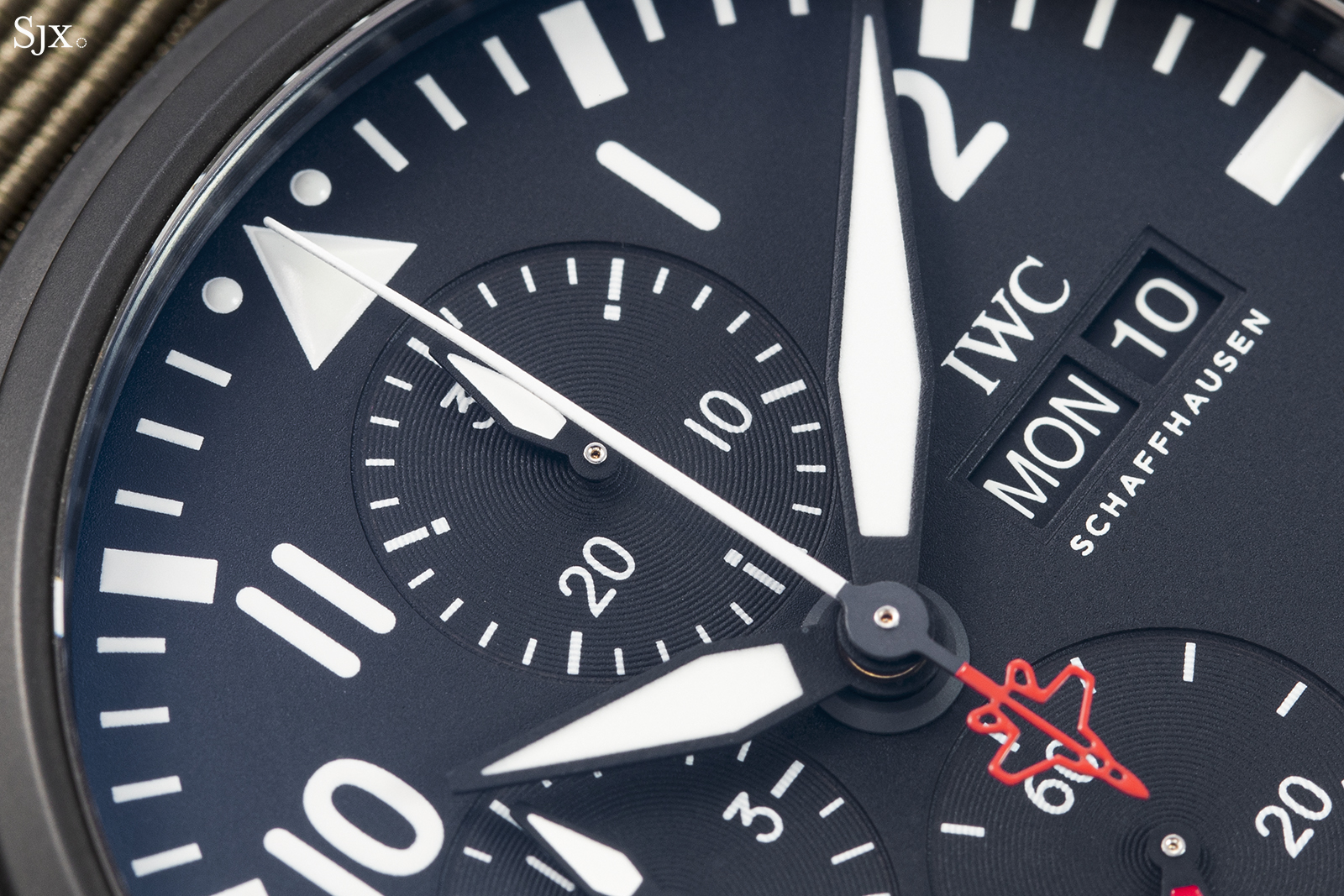 Concentric azurage on the sub-dials

Inside the watch is the in-house cal. 69380, a relatively new movement developed to replace the ETA Valjoux 7750 that was once the standard movement for the IWC pilot’s chronograph – a necessary upgrade since the pilot’s chronograph has suffered from steep price increases over the generations. Distinguishing between the two movements is easy on the dial: the 7750 has its running seconds at nine o’clock, while the cal. 69380 has the seconds at six as it is coupled directly to the fourth wheel. 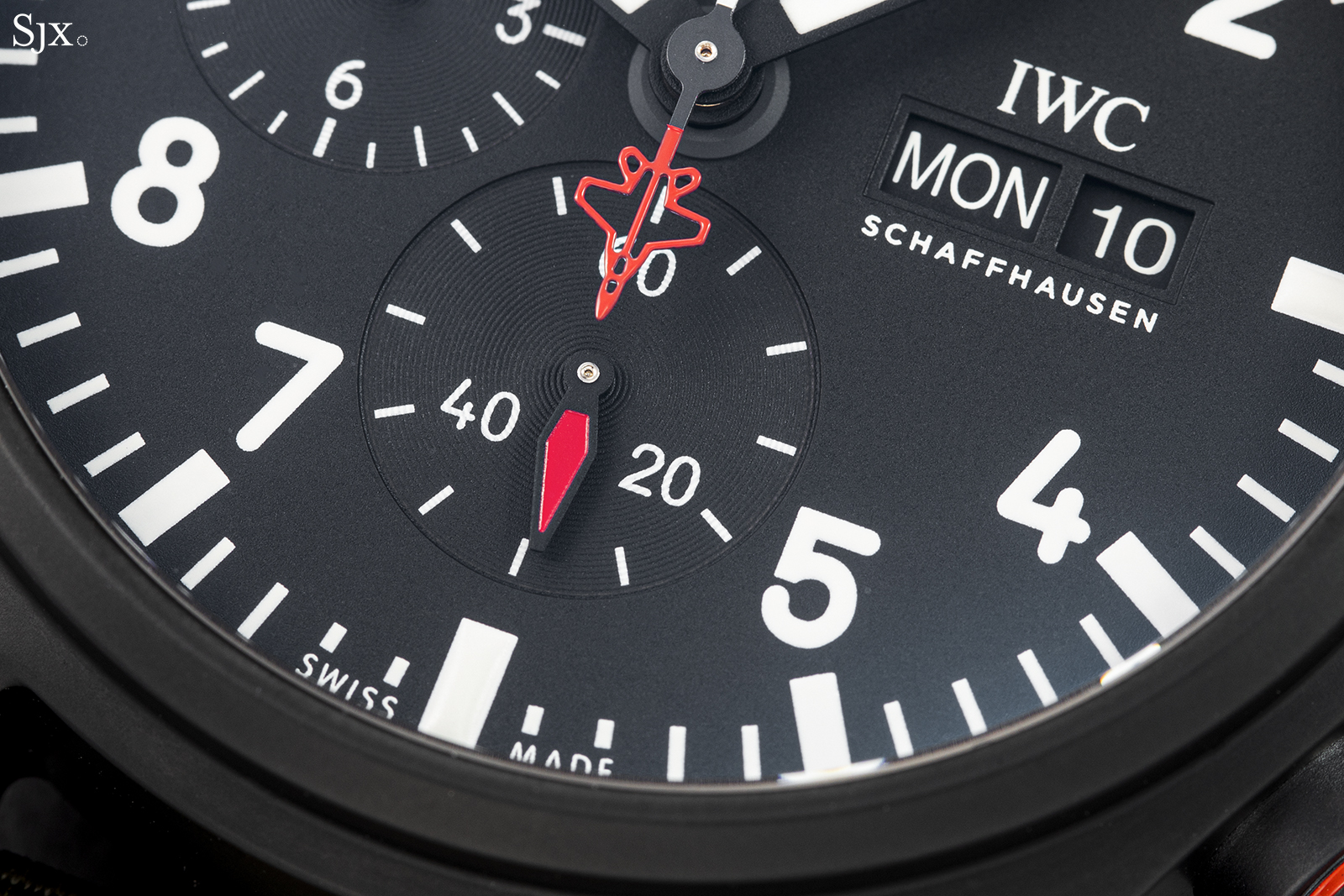 Being part of the 69000 family of movements, the cal. 69380 is similar to the cal. 69355 found in the new Portugieser Chronograph. It is superior to the robust but cost-efficient 7750 in several ways, include having a column wheel instead of a cam, along with a bidirectional, pawl-winding system similar to the more complicated Pellaton winding mechanism of IWC.

As an aside, the cal. 69380 also has an hour counter at nine o’clock, which the cal. 69355 found in the Portuguese Chronograph does not. That’s accomplished by coupling the hour register hand to the mainspring barrel, which conveniently makes a rotation every 12 hours (and completes about four rotations before hitting empty).

The design tweaks for the SFTI edition are well done – the use of Ceratanium parts give the watch a more uniform look that suits the naval-aviator theme better. It is a handsome watch with many of the characteristic qualities of IWC’s pilot’s watches, namely solid engineering and appealing design. 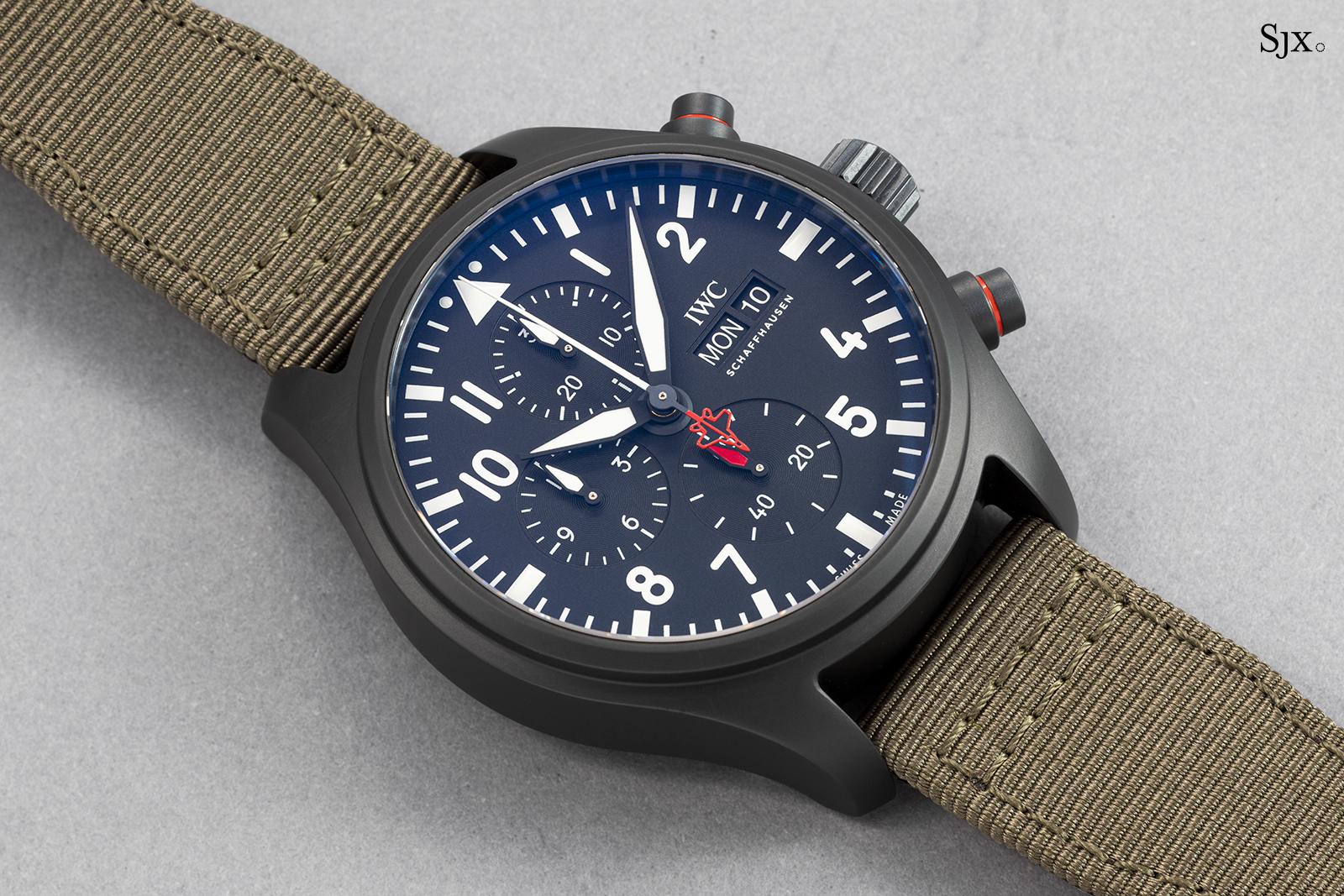 However, the changes are incremental, although accompanied by a modest price hike relative to the standard version. That said, I would have preferred the SFTI edition replacing the regular-production model instead of being a limited run, which might have made it more affordable thanks to economies of scale.

Correction October 16, 2020: The retail price of the SFTI edition is 17% more than the standard-production model, and not 30% as stated in an earlier version of the article.