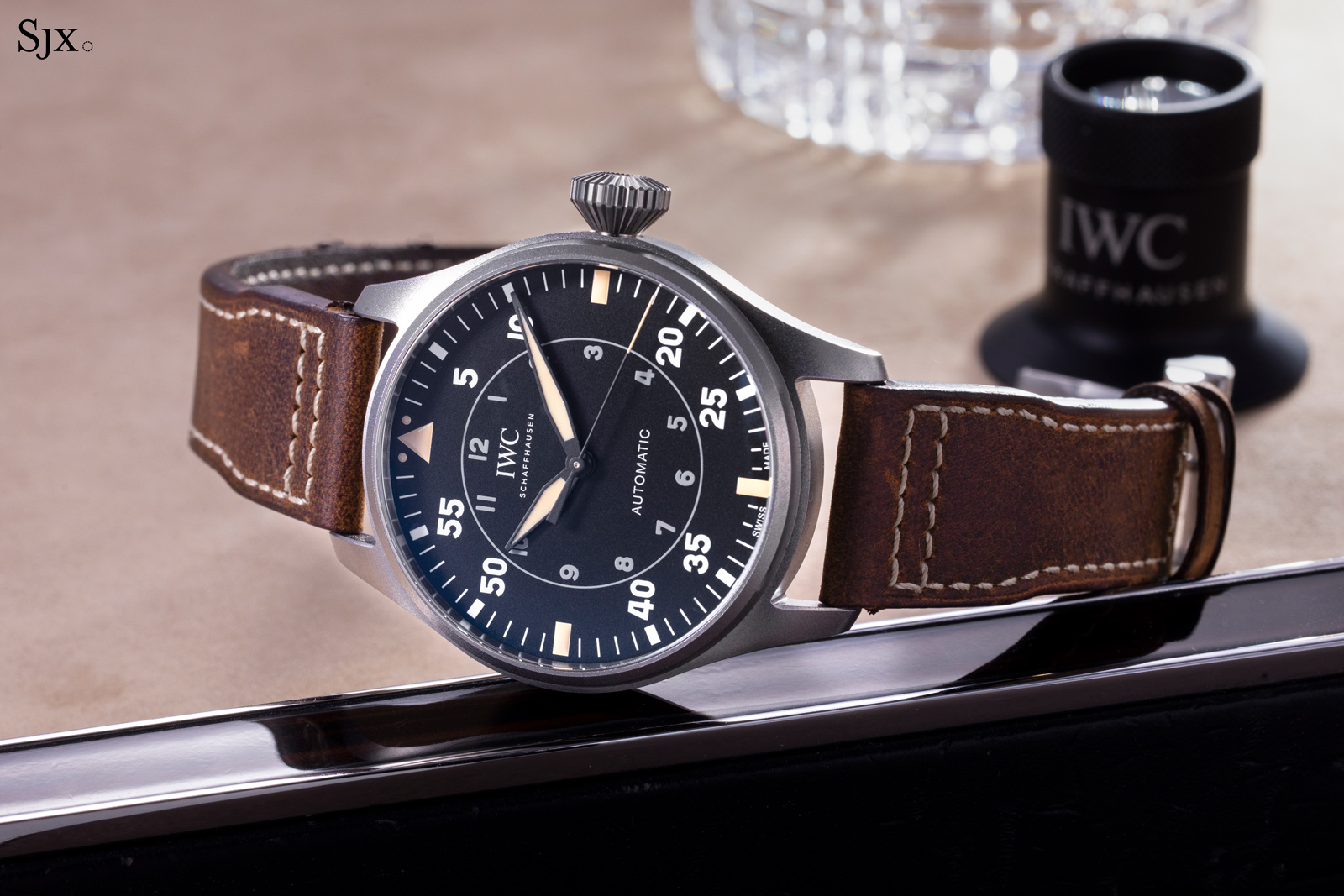 Just last year, IWC debuted its smallest Big Pilot’s Watch to date. Smaller, but not small, the latest Big Pilot is 43 mm, leaving it very much large and legible, but more wearable.

The brand quickly followed up with the Big Pilot’s Watch 43 Spitfire, which shares the same proportions but in new styles and materials. Two variants are available: titanium or bronze, but the standout is definitely the model in the lightweight metal. 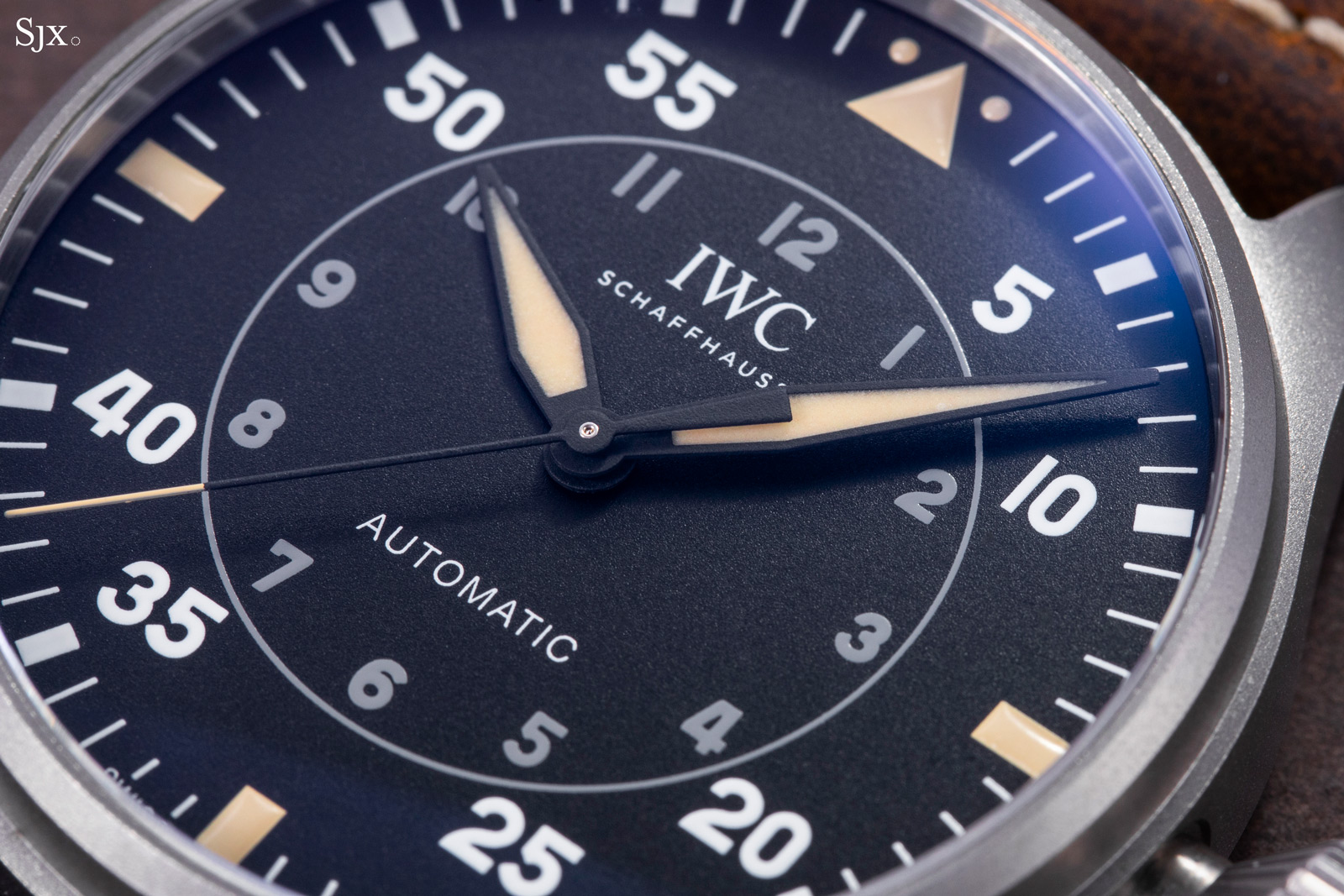 With the original version selling well, the addition of the Spitfire editions is natural. The aesthetic of Spitfire editions is clearly different from the that of the standard model in steel, which is good news for enthusiasts who want something more interesting. History fanatics, however, might frown at the dial design. 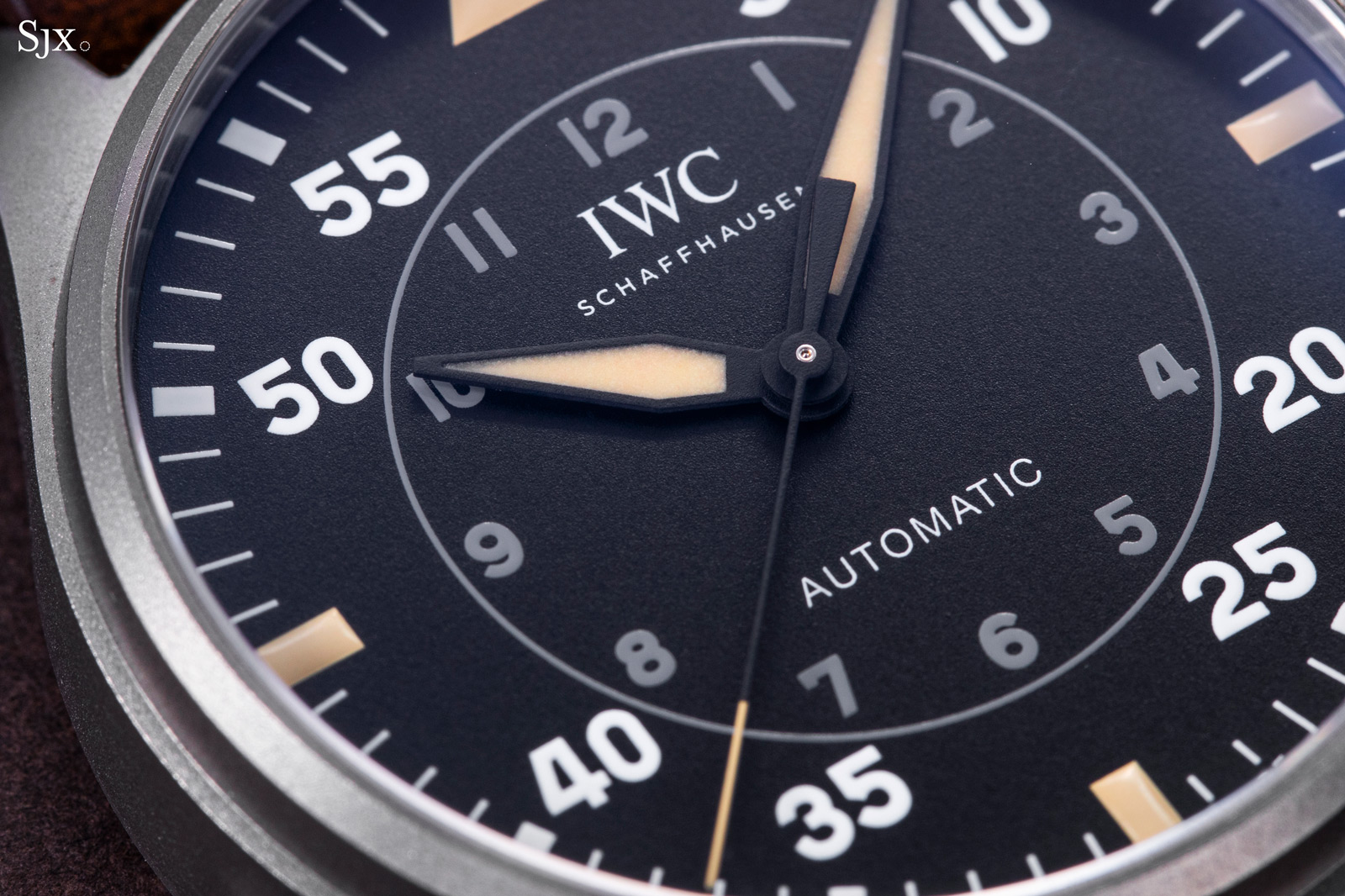 Of the two Spitfire versions, the one in titanium stands out for its unusual, historically-inspired dial (though it’s not exactly historically accurate since IWC didn’t produce a B-uhr with such a dial; more on that below). And it also has an atypical case finish that mimics a worn, vintage case.

On the other hand, the bronze version is identical to the steel model save for the bronze case and green dial – in fact it sticks to the same formula applied to the other Spitfire models such as the chronograph. The bronze version feels like another predictable variant, but the titanium model is novel. Naturally, the Big Pilot’s Watch 43 Spitfire Titanium costs more than the standard model, but the premium is modest. It is approximately 7% pricier than the steel version, which is good value considering the case material and dial design. That said, the steel model isn’t particularly affordable to begin with, as it was priced at the upper end of the price spectrum for a time-only watch with a basic, in-house movement (as opposed to the seven-day calibre found in the full-sized Big Pilot).

Like the steel Big Pilot’s Watch 43, the Spitfire in titanium has a no-date, no-frills dial. But the titanium version does have a distinctly more vintage appearance with its beige luminescent material, which can feel like an affectation. It isn’t a bad look, but it is one that’s been used too often everywhere.

That said, the titanium version have have a more apparent military style thanks to sectored dial with oversized minute numerals, a layout that is unique among the Big Pilot family, across both large and small models.

In fact, this dial has never been found any IWC pilot’s watch, ever.

The design calls to mind the baumuster B, or “Type B”, dial of the beobachtungsuhr, or “B-uhr”, the oversized navigator’s watches supplied to the Luftwaffe, or German Air Force, during the Second World War.

However, IWC only produced B-Uhr with the “Type A” dial, which provided the inspiration for the quintessential Big Pilot’s Watch. A simpler design that is typical of most pilot’s watches, the Type A dial was produced in 1940, before being replaced by the “Type B” dial.

(The Type B dial was found on B-Uhr produced by A. Lange & Söhne, Laco, Stowa, and Wempe, which also made watches with the earlier Type A dial.) A vintage IWC B-Uhr with a Type A dial

The historical confusion is compounded by the fact that “Spitfire” refers to the famed fighter plane of the Royal Air Force during the Second World War. That said, IWC did supply watches to both the British and German militaries during the conflict, so the mix and match is perhaps passable.

From a purely aesthetic perspective, the dial works well. It has an appealing, aviation-instrument look, while also maximising the use of the real estate in the large case.

The Type A dial can seem too plain in a 43 mm (or 46.5 mm) case. Having more elements on the dial, as the Type B design does, helps fill up the expanse. 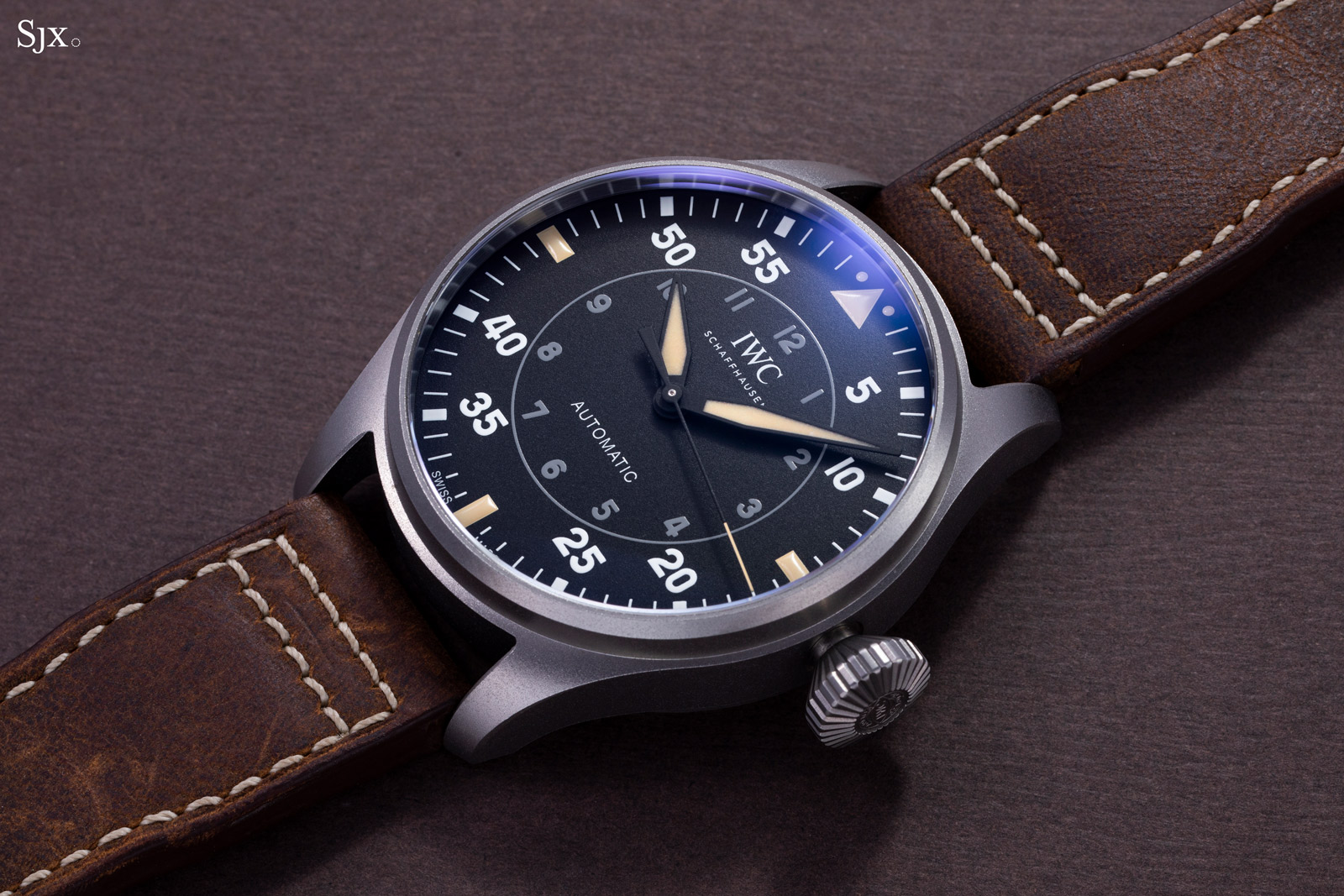 The dial is also executed in a subtle range of colours and textures that vary with its constituent elements. The dial itself is a matte black, with a granular surface apparent up close. The hands echo the matte black finish, making this the only Big Pilot’s Watch 43 with black hands. And the dial features three types of markers, each in a different colour, in order to distinguish the indications on the dial according to their relative importance.

The innermost ring and hour numerals are a discreet grey. Its Arabic numerals do improve legibility, but the grey font convey the fact that hours are not the most important indication on the dial. That’s because pilots need the minutes and seconds at a glance, but not the hours. In contrast, the Arabic numerals for the five-minute scale are much larger and prominent, being printed in bright white.

And the markers at the quarters are rectangles in faux-patina lume, while the 12 o’clock marker is in the traditional B-Uhr style of a triangle and two dots. The quarter markers aid in determining the vertical orientation of the watch and also found in vintage B-Uhr.

But the Spitfire dial does away with the minute numerals at the quarters, which the vintage examples have. It’s not immediately obvious, but the emptiness and imbalance at the quarters is apparent once you notice it. 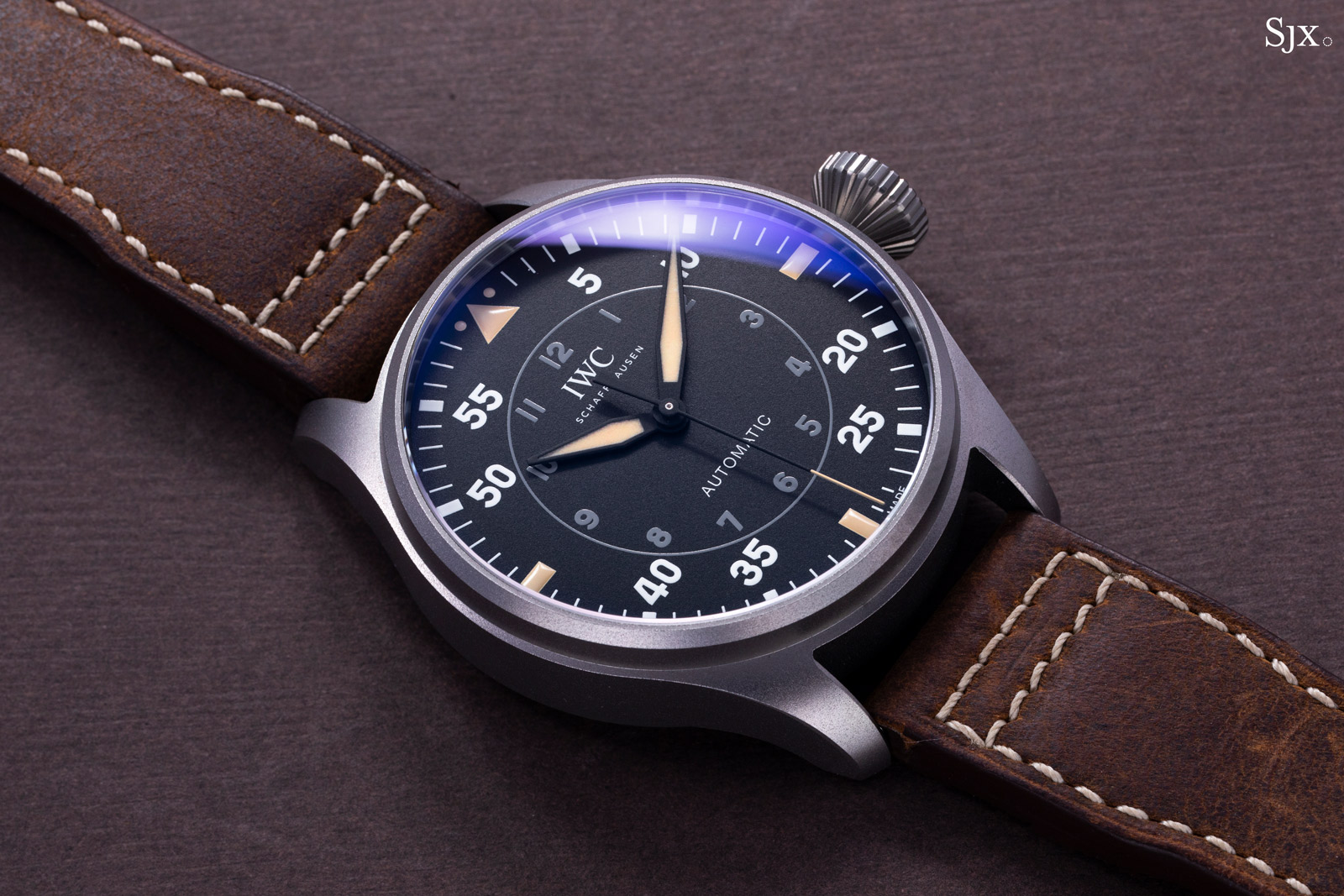 Aside from the dial, the other highlight of the Big Pilot’s Watch 43 Spitfire in titanium is the case. While titanium is a common material in watchmaking, it’s rarely found in IWC’s catalogue today, especially for the brand’s pilot’s watches. 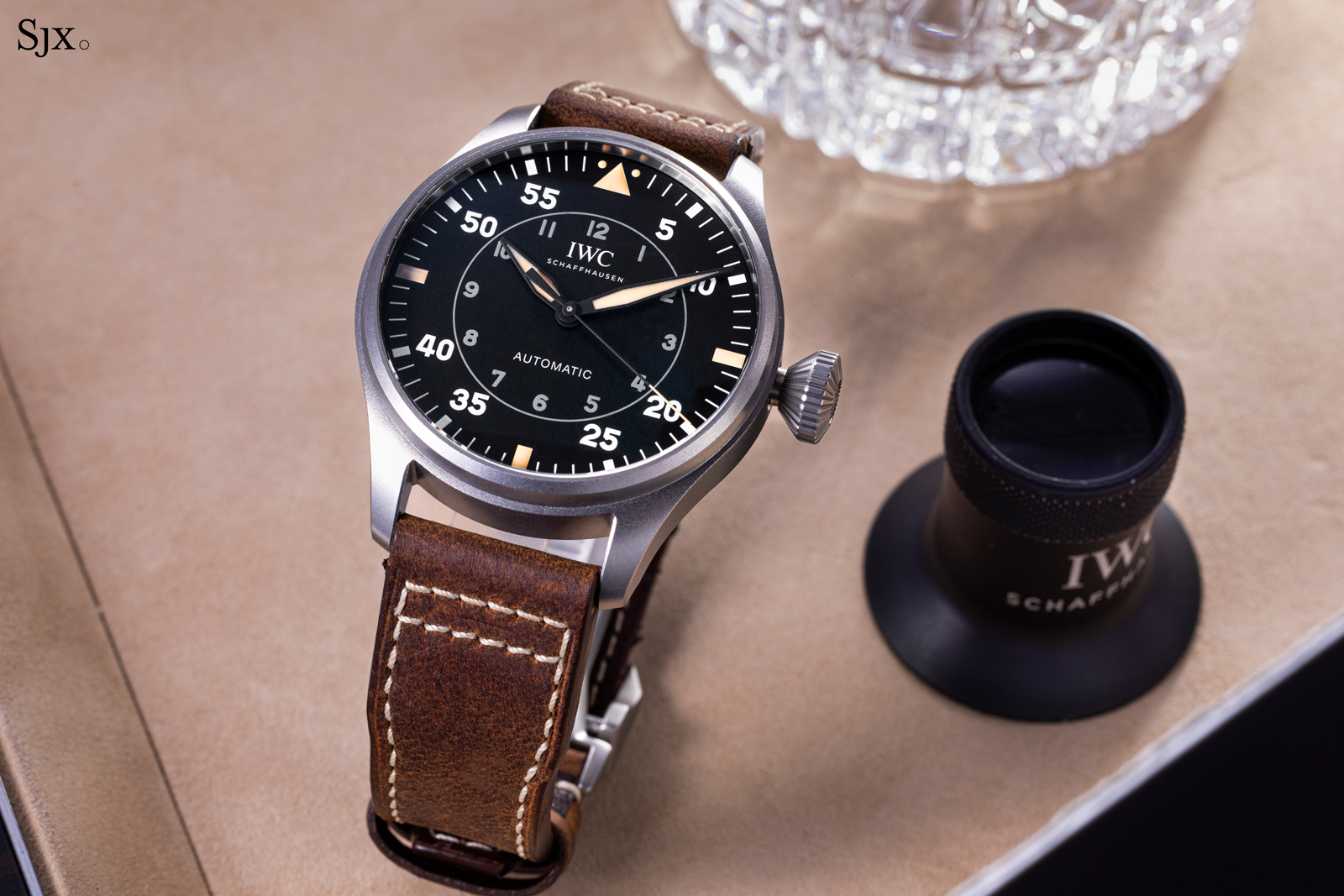 Beyond the material itself, the Spitfire case is also unusual for its finish. The case has an even, gently worn look meant to evoke a vintage watch.

The process of making the brand-new titanium case look old starts with it being entirely polished, followed by sandblasting, giving it a finish that’s finely grained and matte but slightly reflective at certain angles. This finish was first used by IWC’s sister company, Panerai, when it launched the Radiomir 8 Days PAM 992. But because Panerai applied the treatment to a steel case, the Radiomir PAM 992 appears to have a finer and shinier finish. 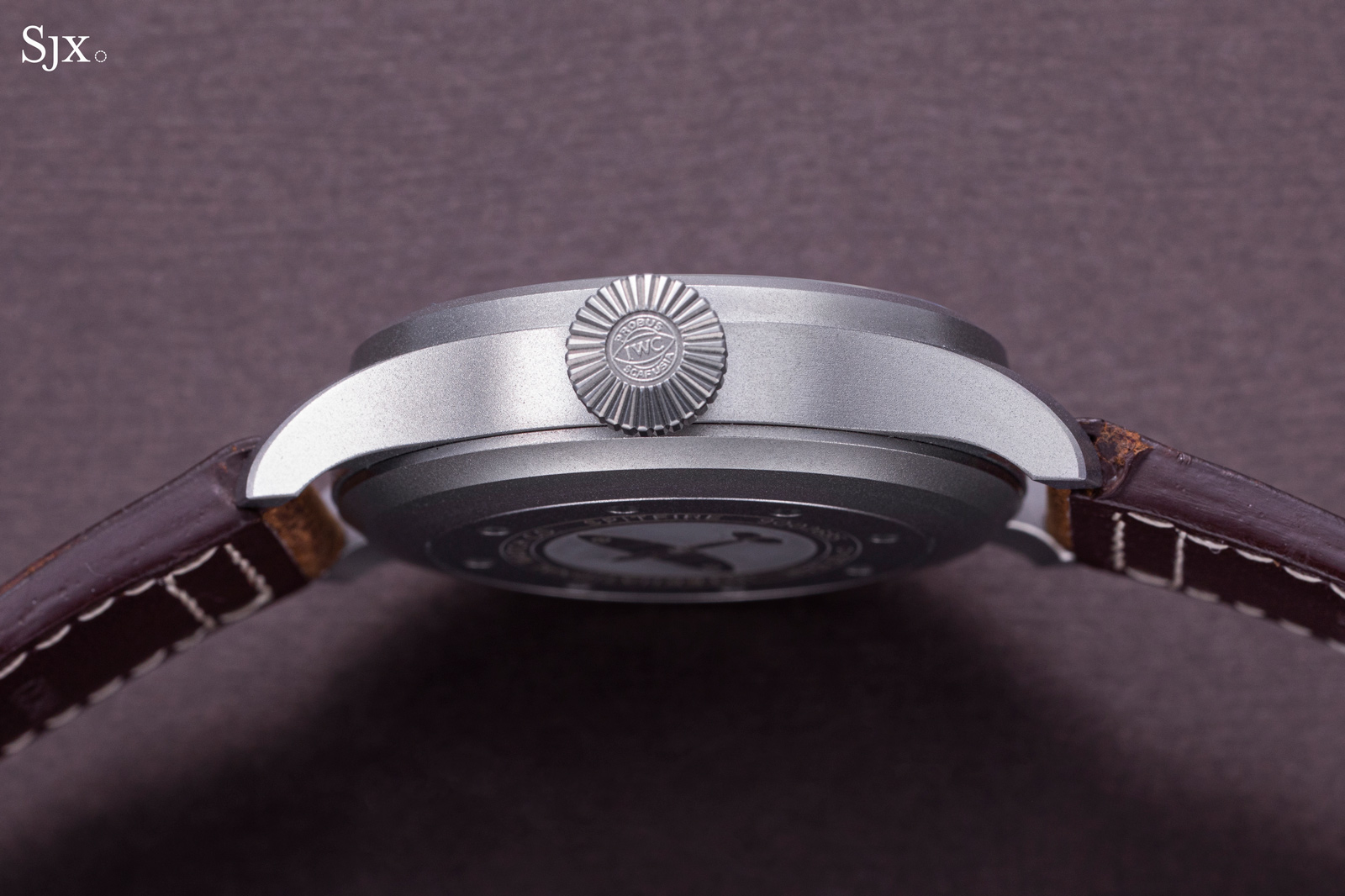 That said, the pronounced grain on the Spitfire case is works better, since the watch has a more instrument-like style than the Radiomir PAM 992. The Spitfire’s muted finish goes well with its military-inspired style, but that also means the case forgoes the attractive polished bevels along the lugs found on the steel Big Pilot’s watch.

Another point of appeal of the Spitfire in titanium is the closed back, which is more traditional for an aviation instrument than the sapphire back found on its steel counterpart. And the solid case back has a practical advantage, albeit a marginal one. It allows for a soft-iron inner case, or Faraday cage, that protects the against magnetism. 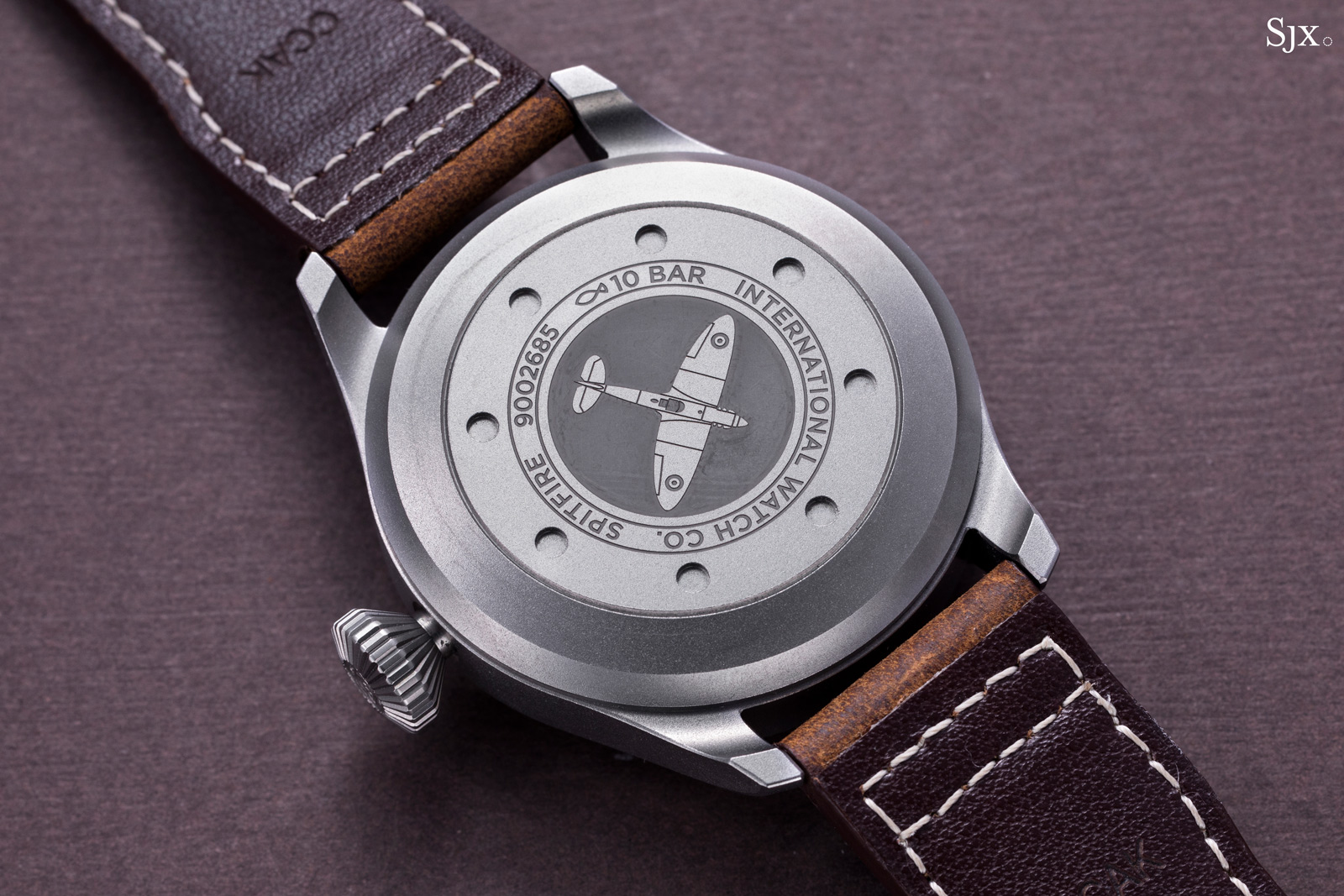 The case back bears an engraving of the Supermarine Spitfire

Beating inside the case is the cal. 82100, a mid-range movement made by IWC.

Though less accomplished than the seven-day movement found in the full-sized Big Pilot, the cal. 82100 is nonetheless a good looking movement thanks to its partially open-worked bridges and symmetrical layout. And it’s also technically able, featuring a free-sprung balance, along with a Pellaton winding mechanism.

Invented by longtime IWC engineer Albert Pellaton, the mechanism is a robust and efficient set up that IWC has used for decades, but upgraded in recent years winding wheels and pawl in wear-resistant ceramic. 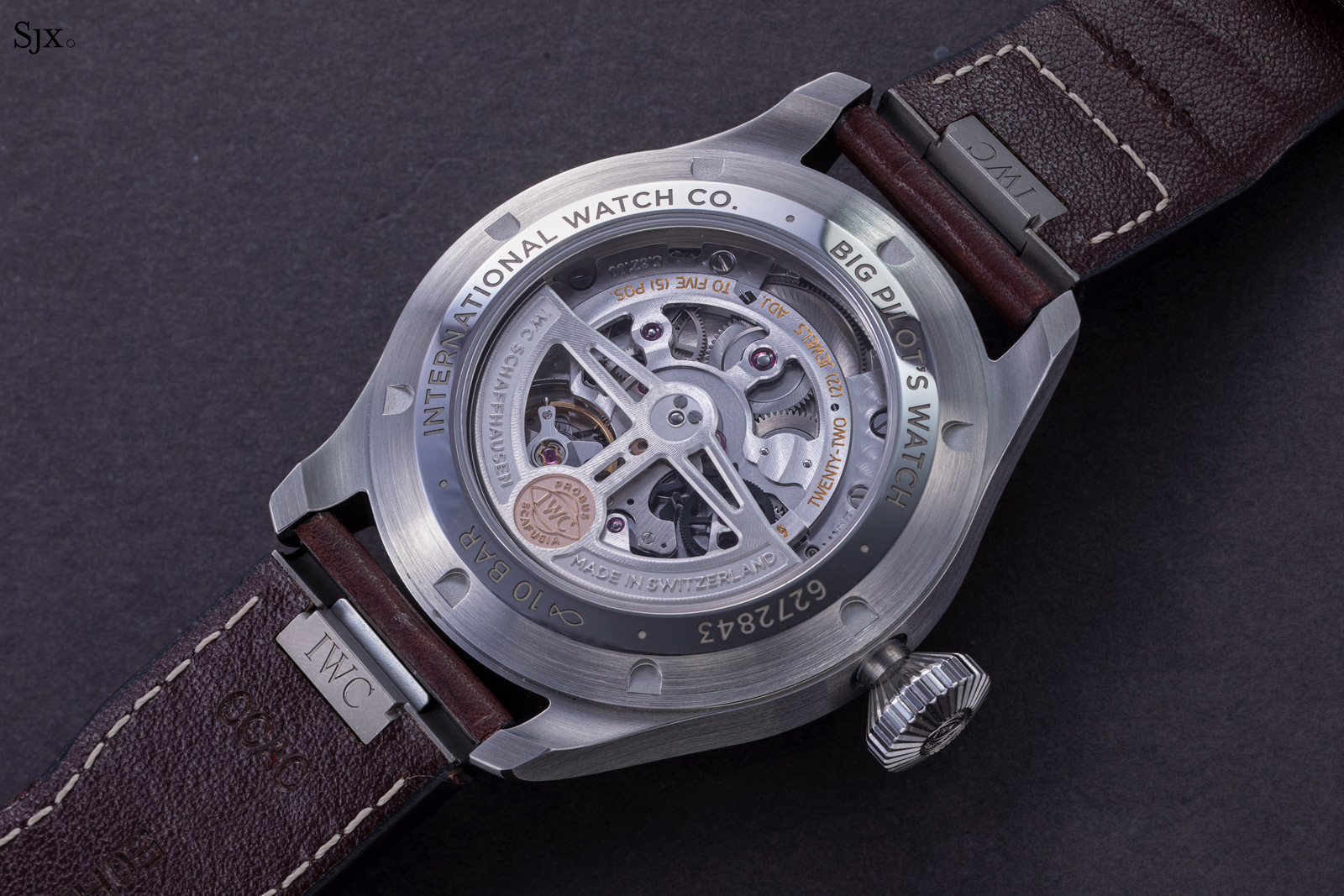 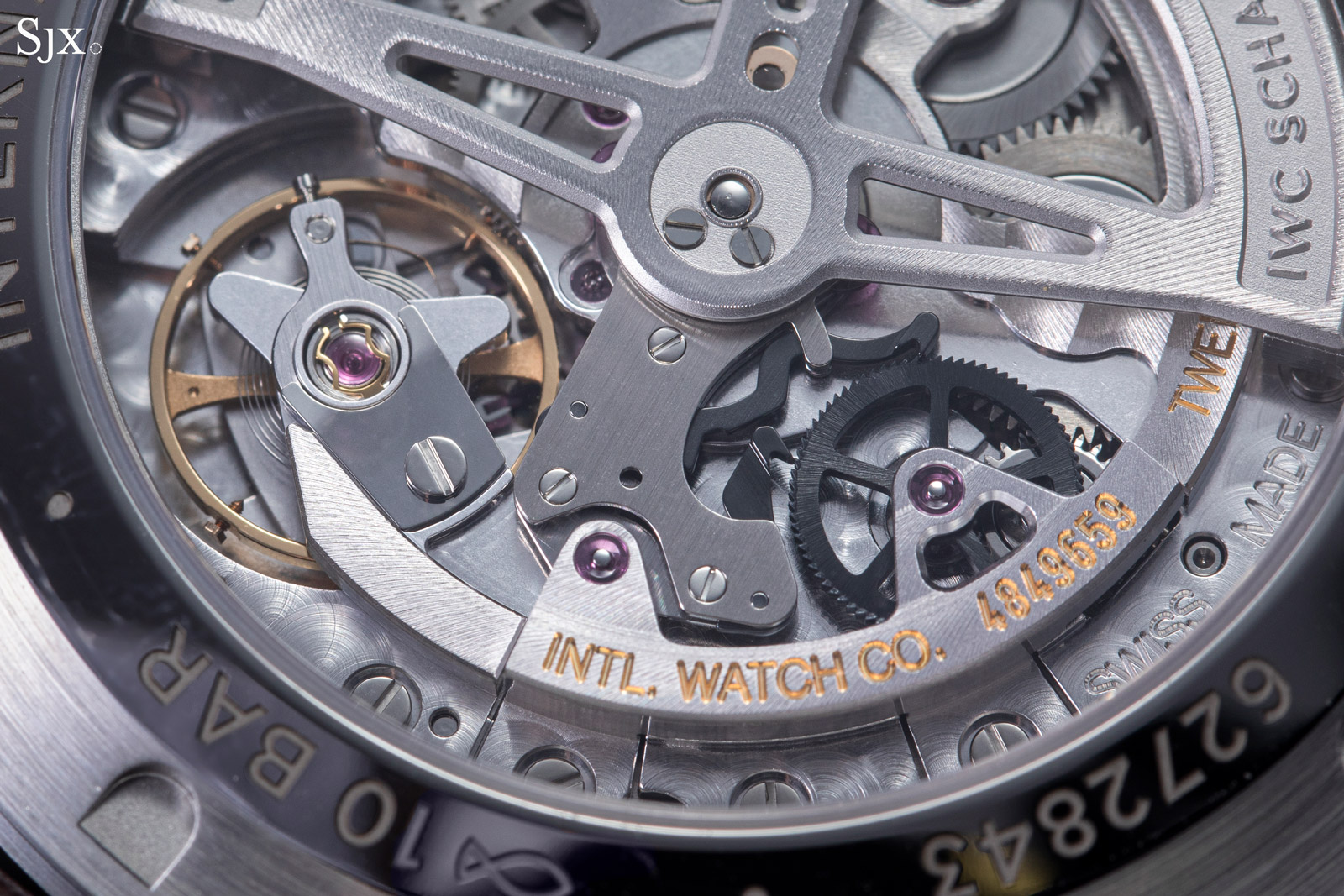 The ceramic pawls and winding wheels

Also, the Spitfire editions also get the proprietary, quick-release leather strap that can be removed by depressing the tab on the back of the strap. But the Spitfire pictured, being a prototype, is fitted to a standard strap.

IWC’s debut of the Big Pilot’s Watch 43 is a commercially savvy move, since it transforms one of the brand’s bestsellers into something more wearable, while retaining the a similar look and feel. And though simplified compared to its bigger brother, the movement within preserves most of the fundamentals of the brand – an in-house construction with features like Pellaton winding.

The Spitfire edition in titanium is a good follow-up to the steel model, being identical in size but executed in an unusual manner, which is a feat given the sheer number of pilot’s watches that IWC puts out. It has a case and dial that’s different – in a good way – which easily makes it the most striking iteration of the Big Pilot 43. 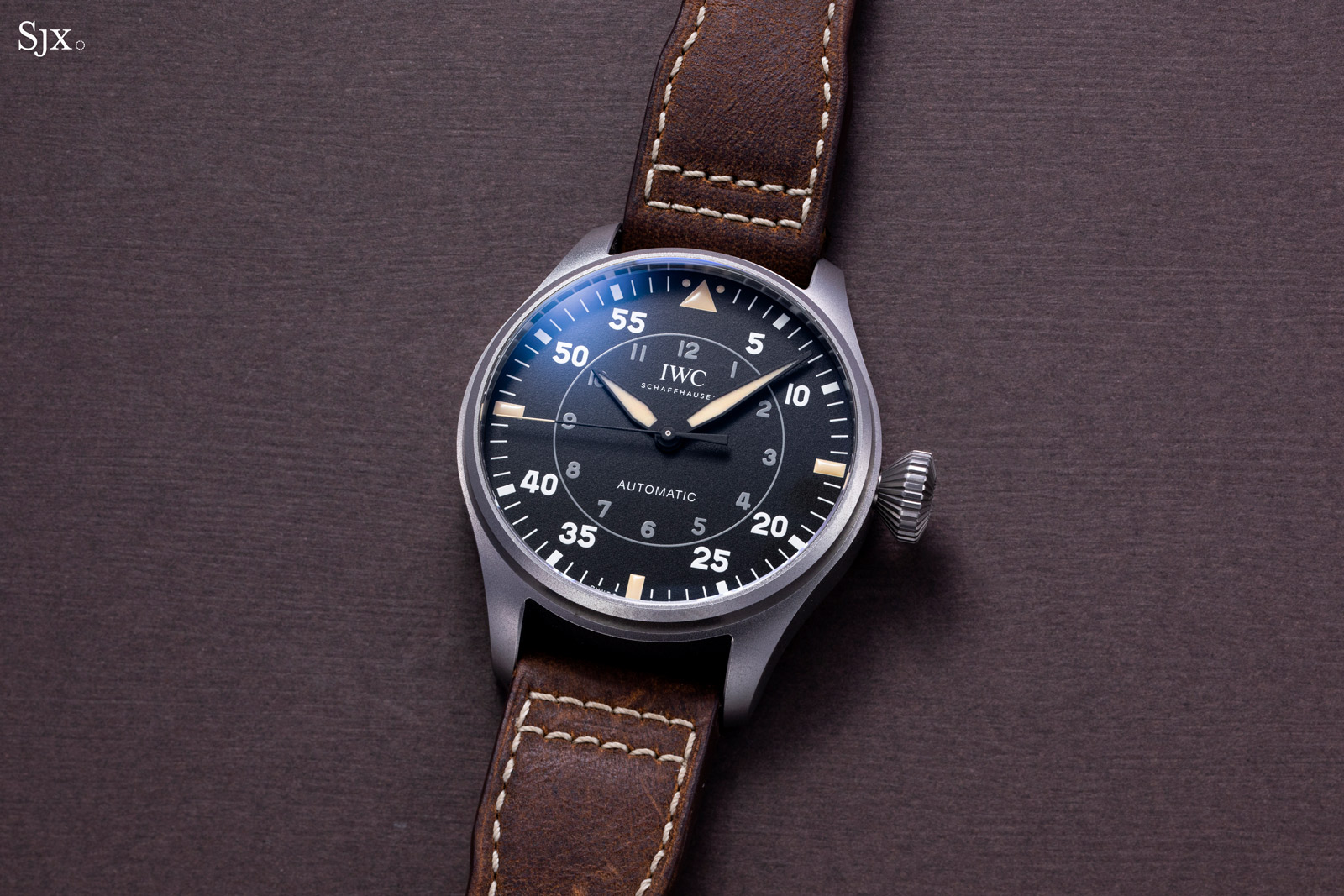