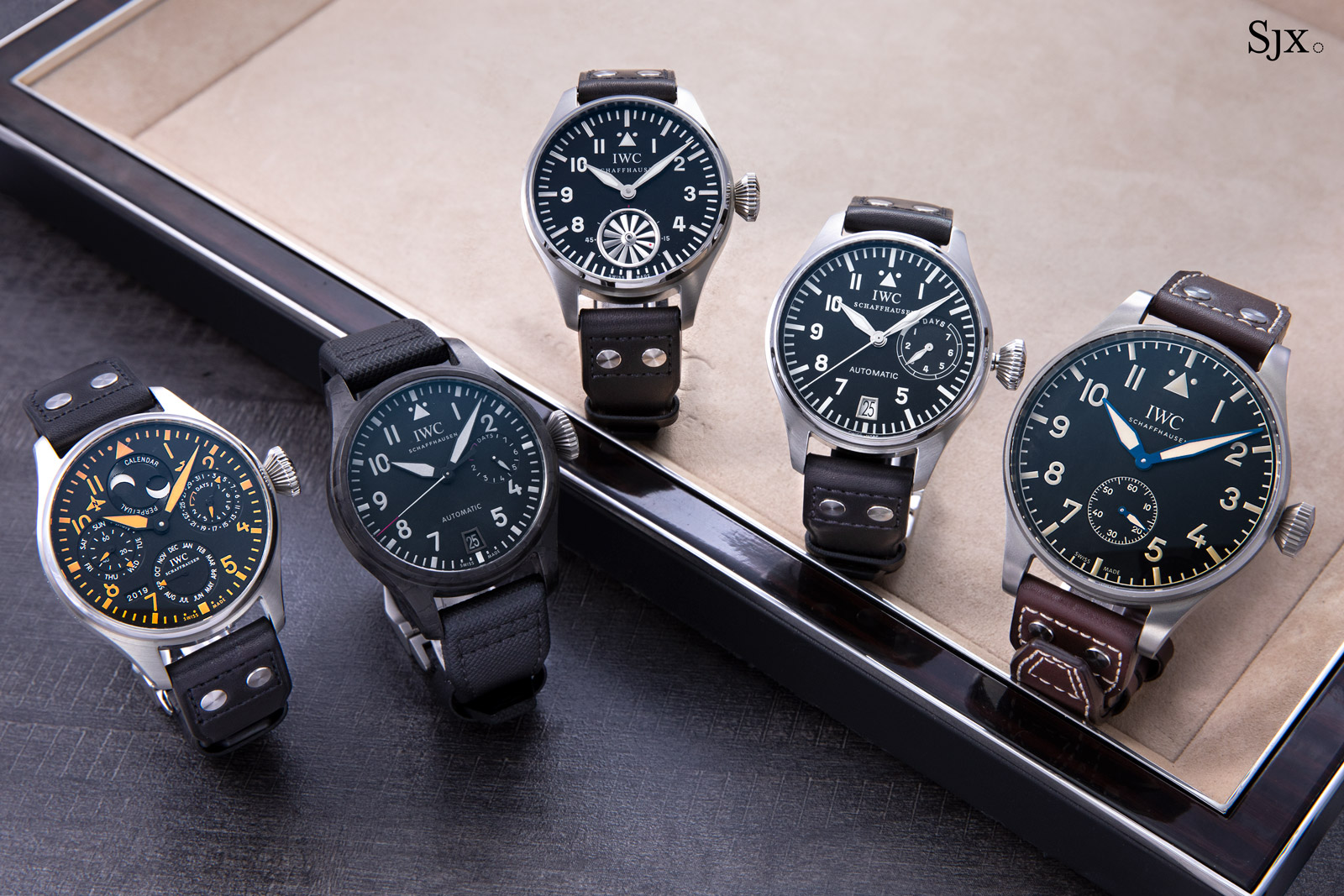 Fully booked before it even opened, the IWC Big Pilot Exhibition in Singapore recently closed its doors and the 31 Big Pilot’s Watches that were on show have returned home to the IWC Museum in Schaffhausen. But for those who missed the show, we round up some of the historically significant examples that were on displayed. The lineup naturally includes the very first Big Pilot’s Watch ref. 5002, and also the ultra-rare Markus Bühler “Turbine” ref. 5003.

(And the Big Pilot Roadshow will happen in various cities in the United States starting September; details at the end of this article.)

The modern-day Big Pilot can be traced back to the gigantic beobachtungsuhr (or”B-uhr” for short) that IWC supplied to the German air force in 1940. The one that started it all was the Big Pilot’s Watch ref. 500201 (widely known as the ref. 5002) that debuted at Baselworld in 2002.

Codenamed “Big Pilot’s Watch – Mark XXI” while in development, the Big Pilot was due in part to the commercial success of the compact Mark 12 pilot’s watch. At the same time, it was also devised as a platform for the recently-launched, seven-day automatic cal. 5000, a movement large enough that the resulting pilot’s watch had to be, well, big. And big it was, though the ref. 5002 was smaller than the second world war original that was 55 mm. Still it retained many of the elements that defined the vintage B-uhr – onion crown, Arabic numerals, and an unusual 12 o’clock marker.

But some of the vintage-inspired details found in the ref. 5002 never continued in subsequent models, namely the oversized minute track that gave the dial an appealingly functional style. 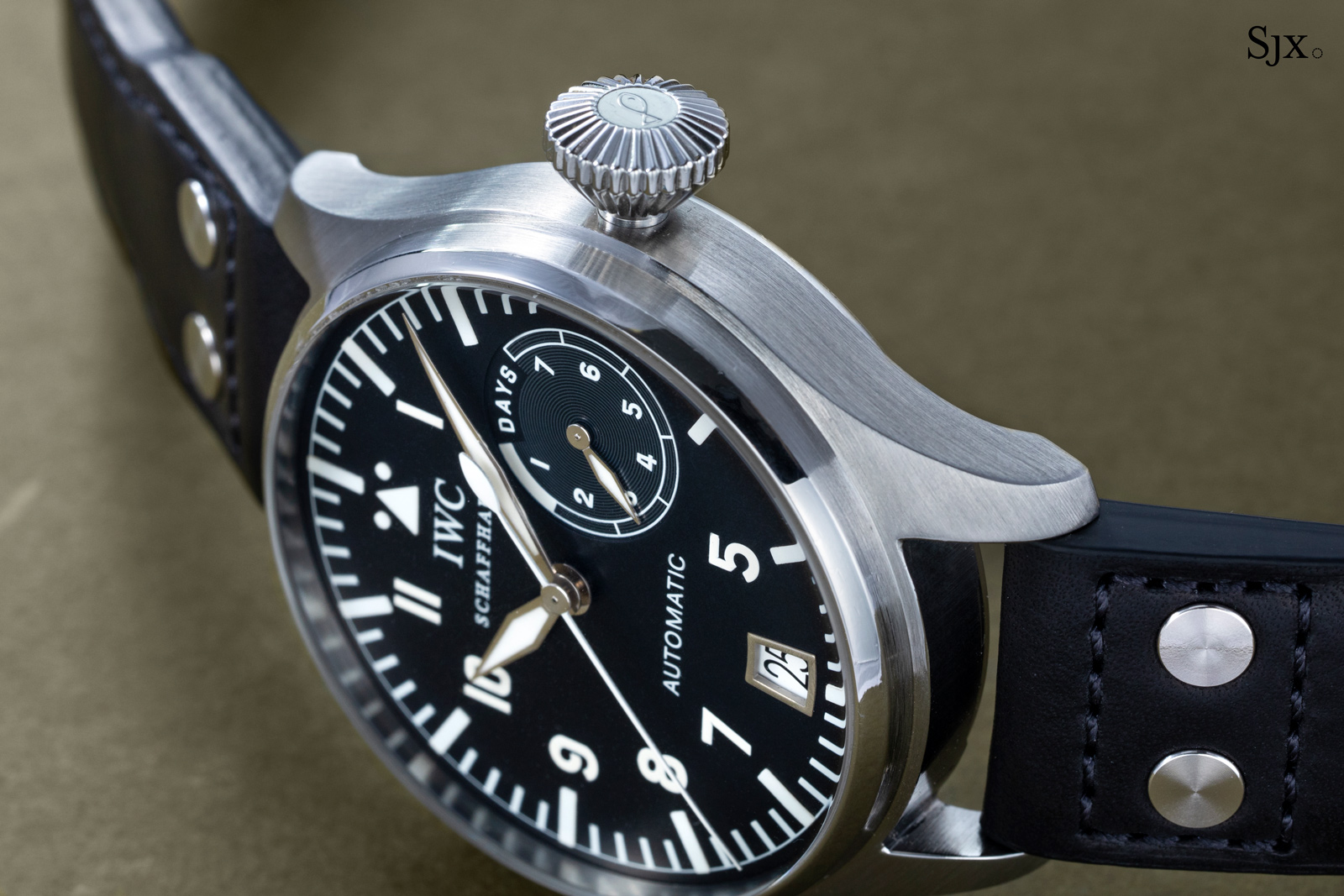 Note the “fish” symbol on the crown, historically found on IWC’s water-resistant watches

More than its size and style, the ref. 5002 was notable for the movement within. In fact, at the time of its launch the Big Pilot was one of the rare few sports watches that debuted with an impressive new calibre. The only automatic movement with a weeklong power reserve at the time, the cal. 5001 showcased IWC’s prowess in movement engineering.

While the movement premiered two years earlier in the Portugieser Automatic 2000, its presence inside the Big Pilot made it famous beyond watch geeks, because the Big Pilot was a watch perfect for the prevailing taste of the era, which was inclined towards very large sports watches. And remember, this was two decades ago – the Big Pilot was one of the few mechanically-sophisticated sports watches on the market. The calibre was hidden behind a solid back, necessitated by the soft-iron inner cage to protect the mechanics from magnetism

Though conceptually incongruous in an aviator’s watch, the perpetual calendar has become synonymous with the Big Pilot. It was the first complication installed in the model, coming two years after the launch of the original ref. 5002. The very first models were a pair of limited editions in 2006 for retailers Cellini and Sincere, in titanium and platinum respectively.

The perpetual calendar was logical extension of the line, since it sits on the same seven-day automatic. And though it relies on the common four-register layout, the calendar mechanism is unique to IWC. Invented by IWC’s longtime technical chief Kurt Klaus in 1985, all of the calendar indications are in sync, and can only be set forwards via the crown, which eliminated many of the hassles of the traditional perpetual calendar setup. This smart and impressive construction, however, did have one downside – advancing the calendar beyond the current date meant having to wait for the date to catch up. 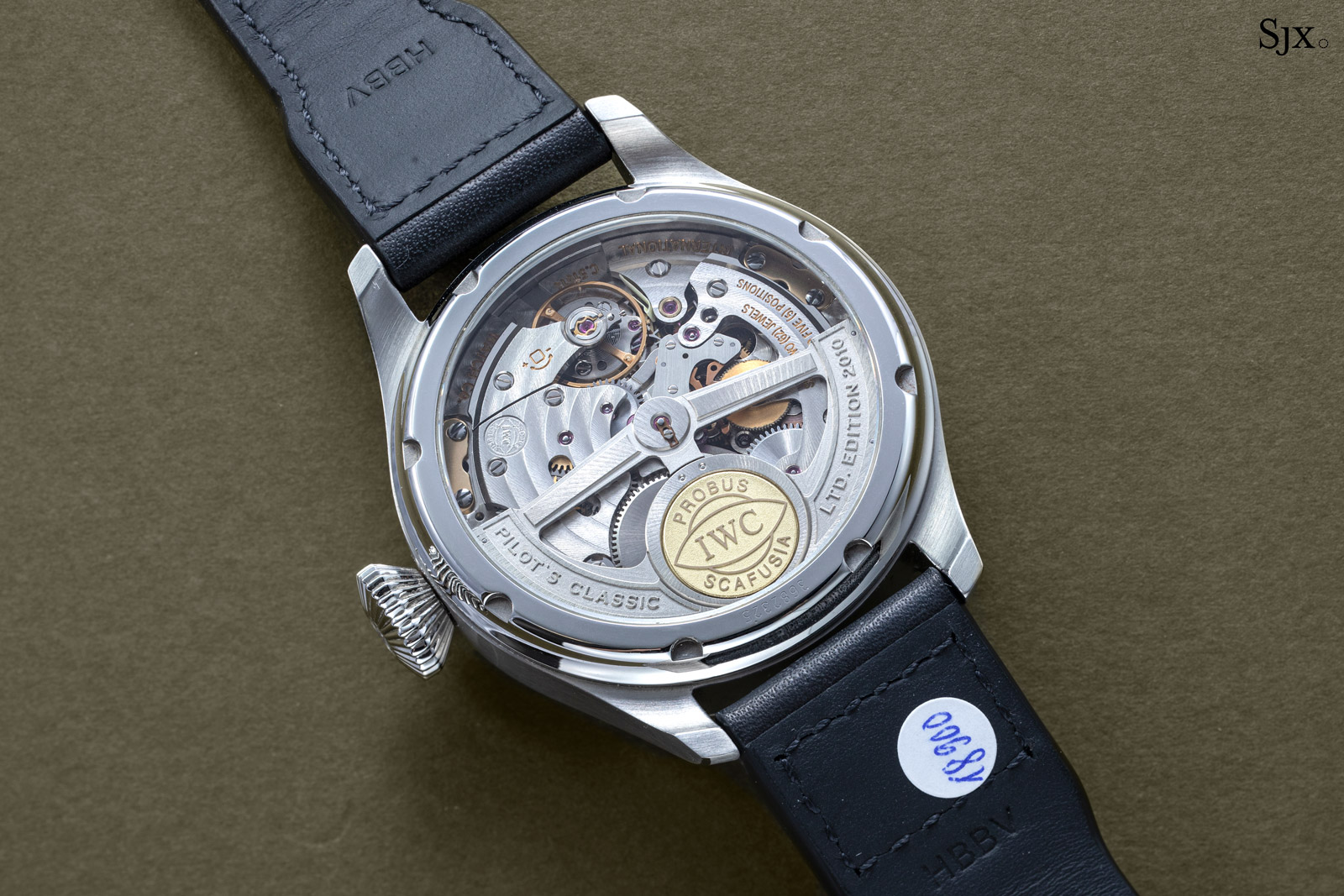 The ref. IW502618 pictured here arrived at 2010 – it was a boutique-only limited edition – so it’s not one of the first versions, but it was an example of where the Big Pilot was heading.

In contrast to the no-frills, B-uhr style of the ref. 5002, this edition opted for a more casual style with funky orange details. This would eventually become the prevailing aesthetic for the Big Pilot, a look exemplified by the Lewis Hamilton edition created for the British Formula 1 champion in 2019. 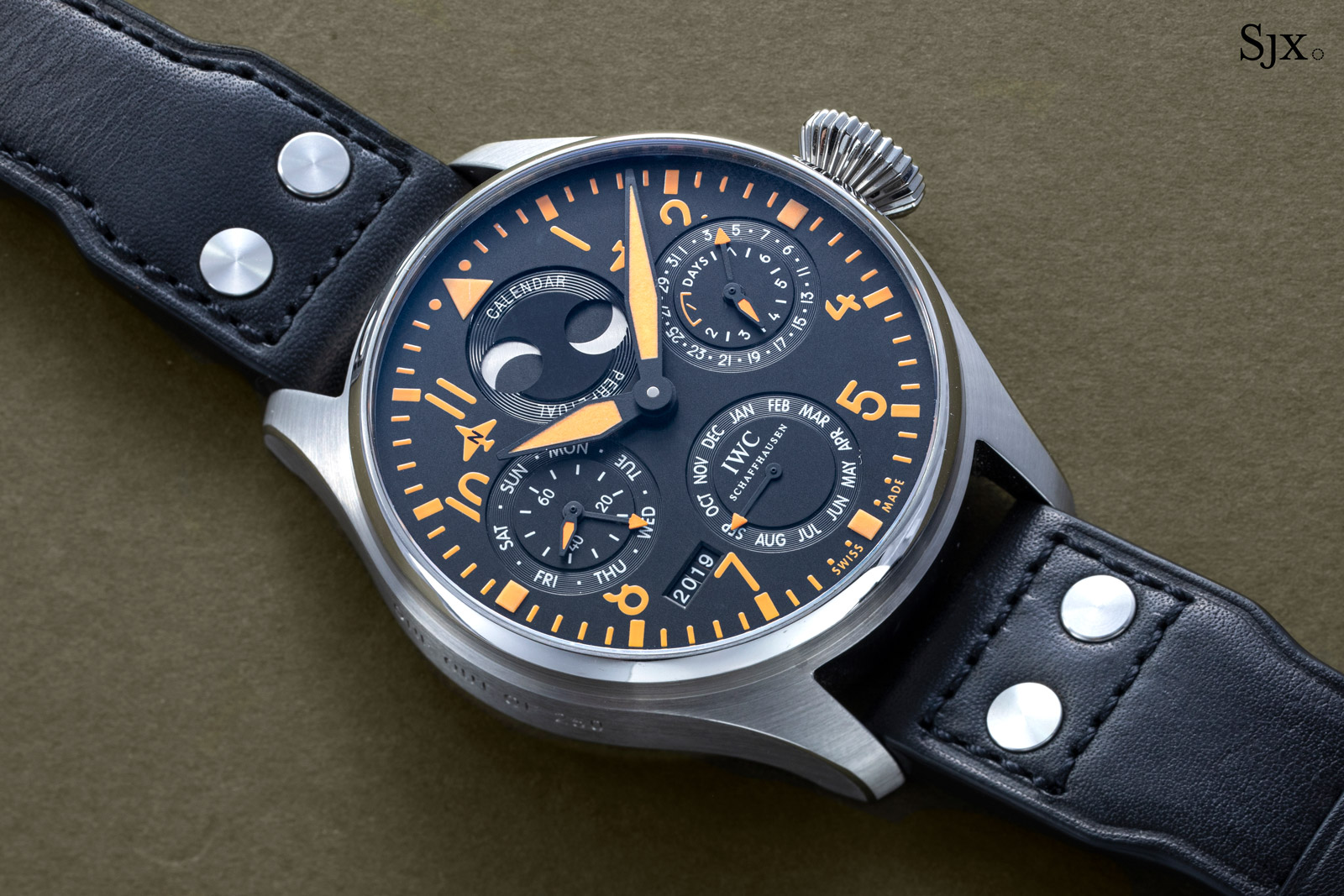 If there was a unicorn amongst Big Pilots then this would be it. The most intriguing watch on show at the exhibition was undoubtedly the Big Pilot’s Watch Edition “Markus Bühler” ref. IW500301. It was a limited edition of just 12 conceived by the eponymous watchmaker who was then an apprentice at IWC. His winning entry was a hand-wind, pocket-watch movement modified to incorporate a turbine wheel on both the front and back, in the form of the constant seconds and barrel ratchet wheel respectively.

IWC decided to launch a limited edition of a dozen pieces that was launched in 2008. The Big Pilot “Bühler” is interesting enough we’ll cover this in-depth – with lots more photos – soon enough.

The only contemporary Big Pilot that was as big as the WWII original was the Big Pilot’s Watch Edition Heritage Watch 55 ref. IW510401. Just like the vintage “B-uhr”, the Heritage Watch 55 is a massive 55 mm wide, but despite the identical sizing, it is further from the original in terms of design than the ref. 5002.

Launched in 2016, the ref. IW510401 was one half of a pair of limited editions. Both shared the same design, but only this version has the oversized case though produced in a smaller run of just 100 pieces. The other was a large but more wearable 48 mm, and an edition of 1,000 watches. Because the case is extra-large, it was sensibly made of titanium for lightness. At the same time, the titanium case evokes the matte, sandblasted case of the vintage original.

That said, while the case of the Heritage Edition has the same diameter as the original, it is clearly thinner thanks to the movement within. 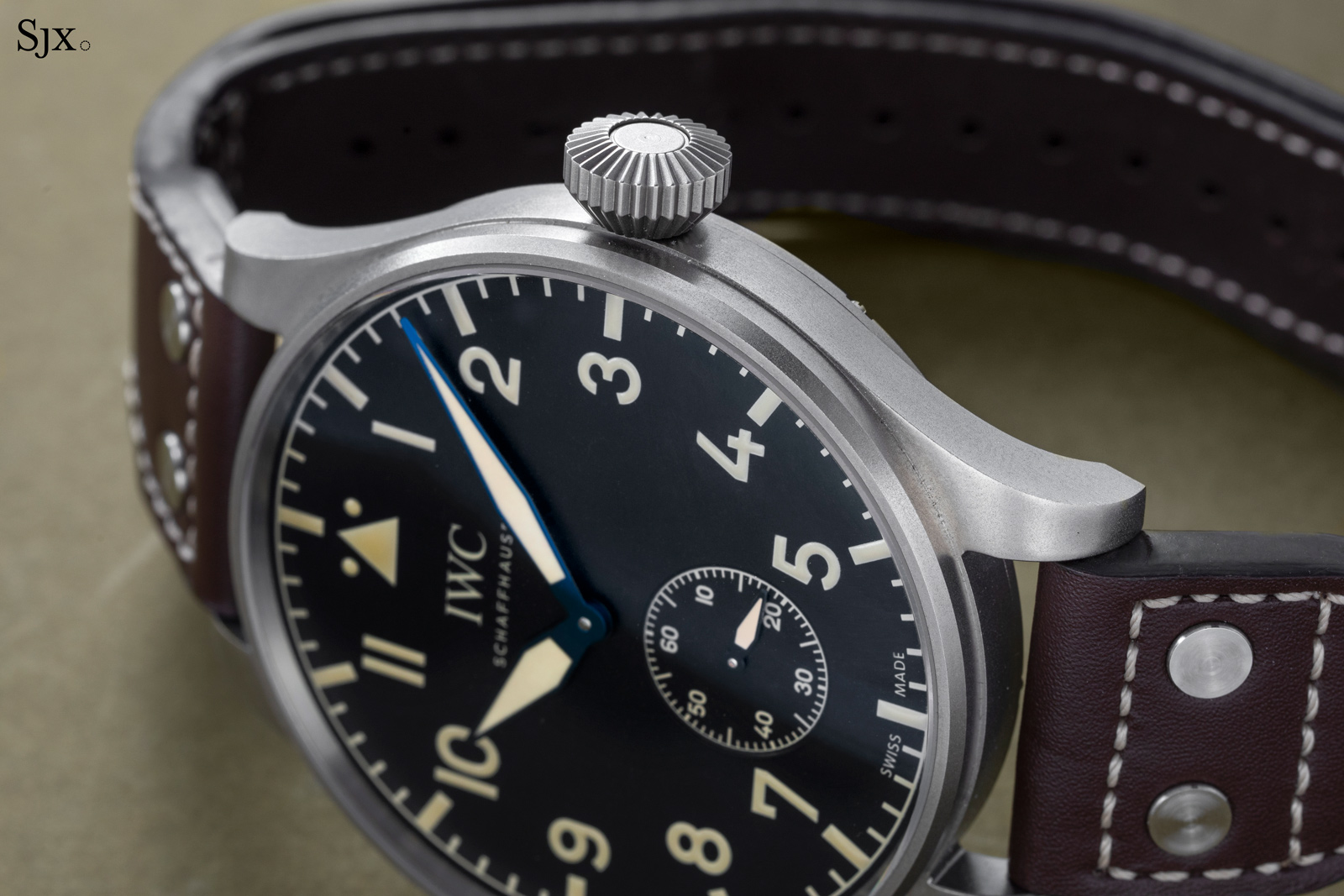 Amongst its most notable feature is an extra-long, needle-like regulator index that’s half as long as the movement diameter. Another feature of the movement is a small seconds at six, which gives the Heritage Edition a decidedly different look from the vintage original with its central seconds. 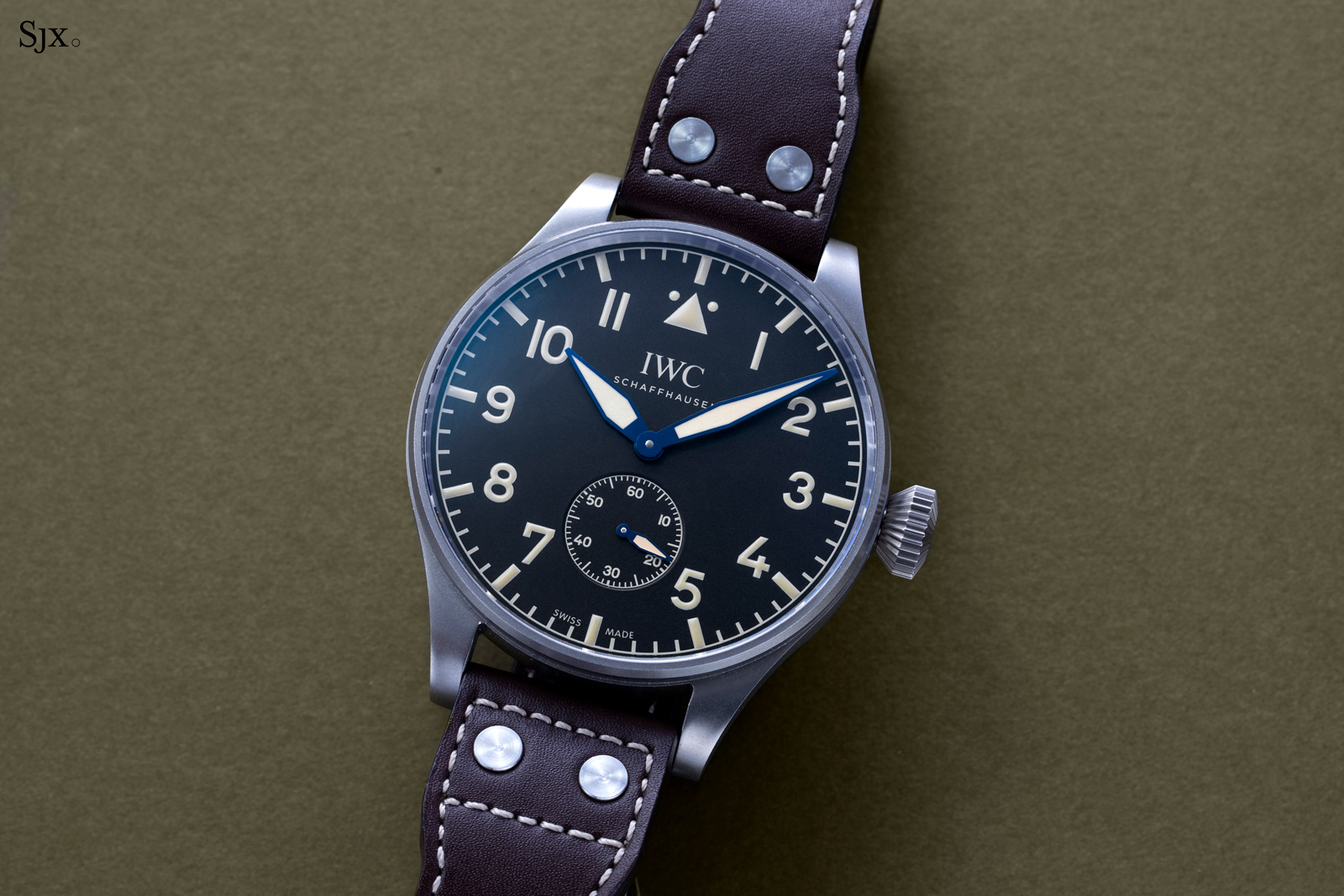 One of the most unusual and coolest Big Pilots ever is also one of the least known. Dropped quietly last year, the Big Pilot’s Watch Edition “Black Carbon” ref. IW506101 is pretty much an insider’s watch, conceived by enthusiasts who attended a design workshop organised by the brand in Hong Kong (and the resulting 100-piece edition was primarily available to those enthusiasts). 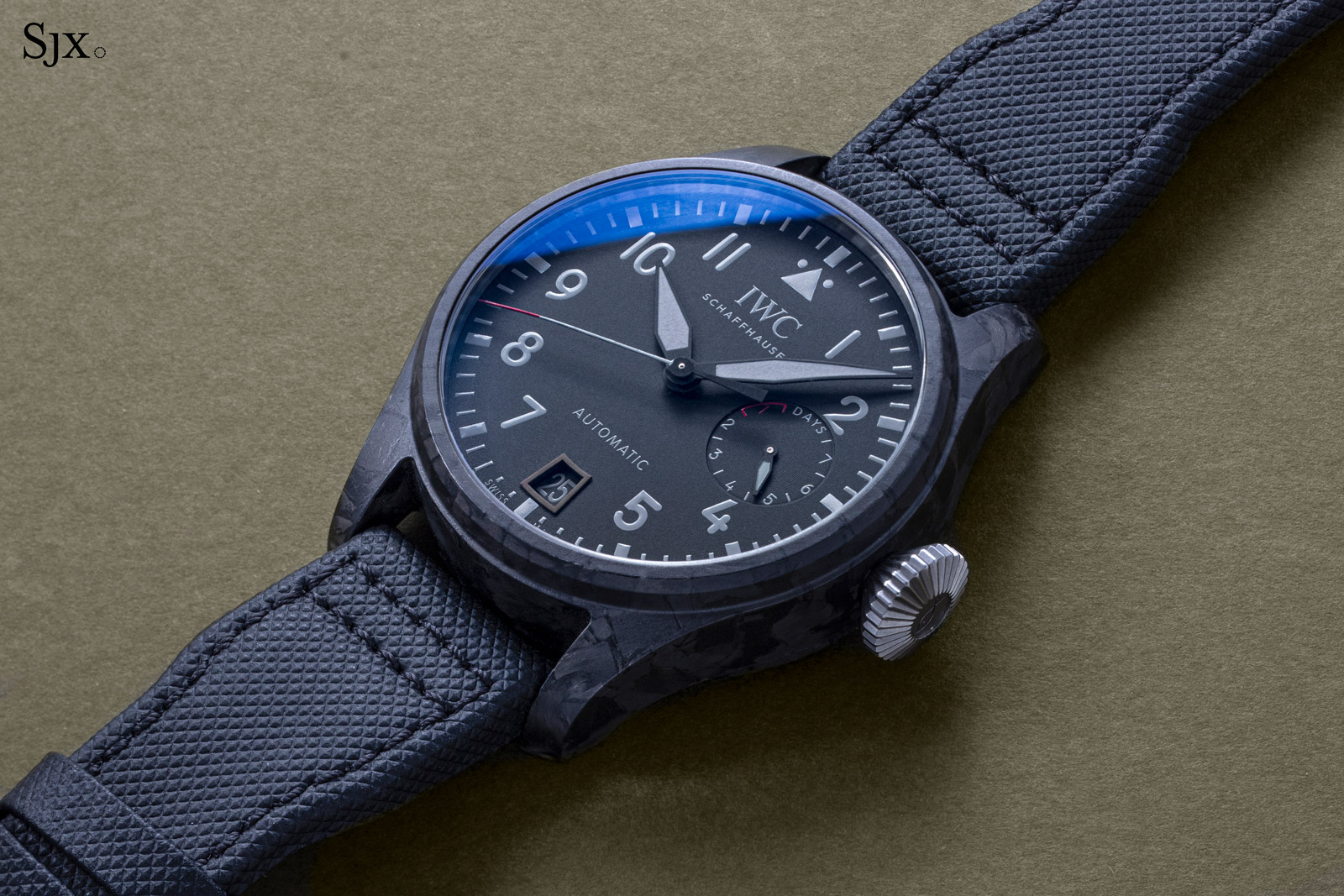 Perhaps the most telling detail that the watch was conceived by diehard IWC aficionados is the “fish” crown. Found on IWC watches from the 1950s to the mid-2000s – the ref. 5002 was the only Big Pilot to feature it – the “fish” emblem indicated water resistance, but was later replaced by the “Probus Scafusia” brand logo.

Despite its long absence, the “fish” emblem is fondly remembered by enthusiasts. Not only is it found on the crown of the Big Pilot “Black Carbon”, but also on the case back. 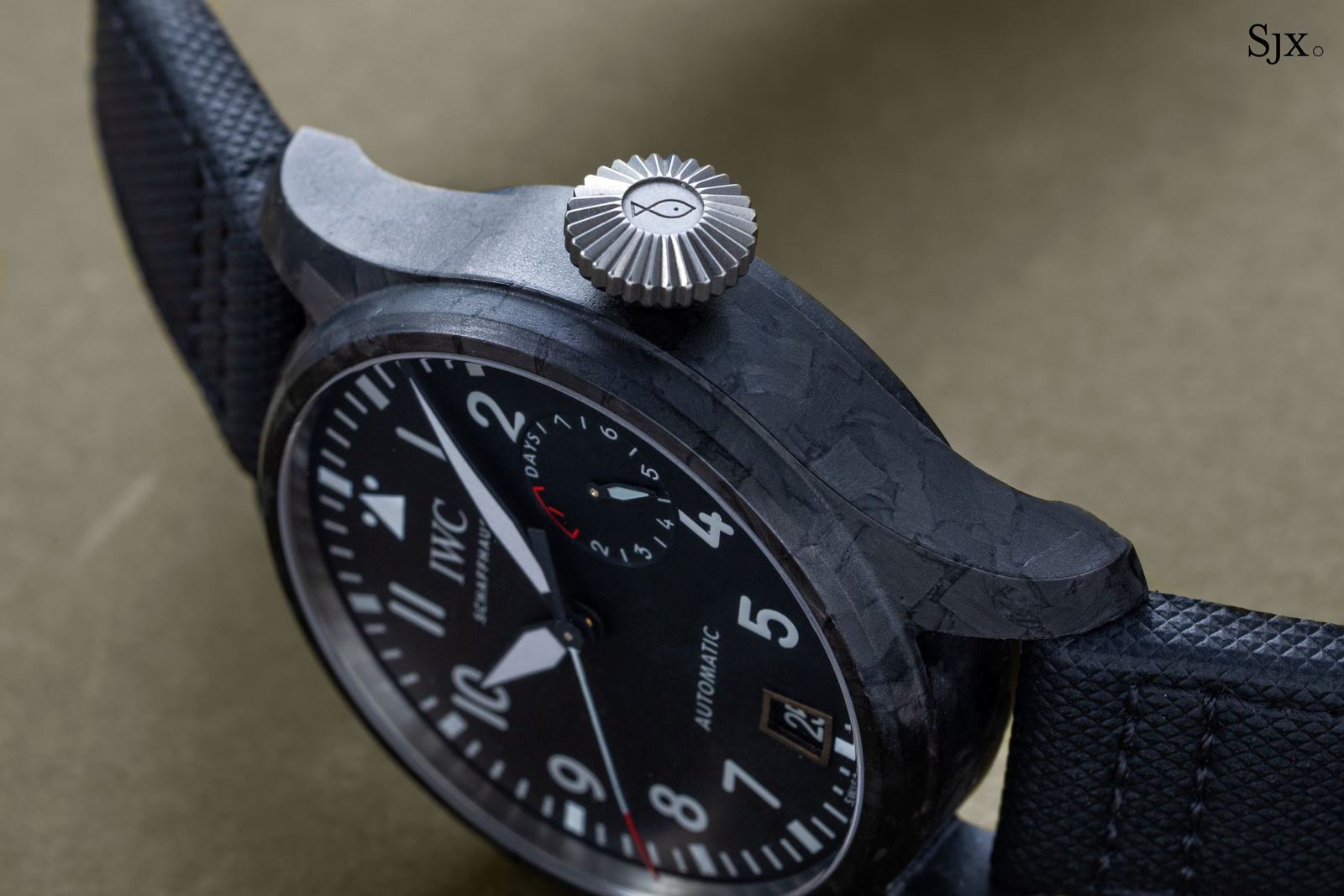 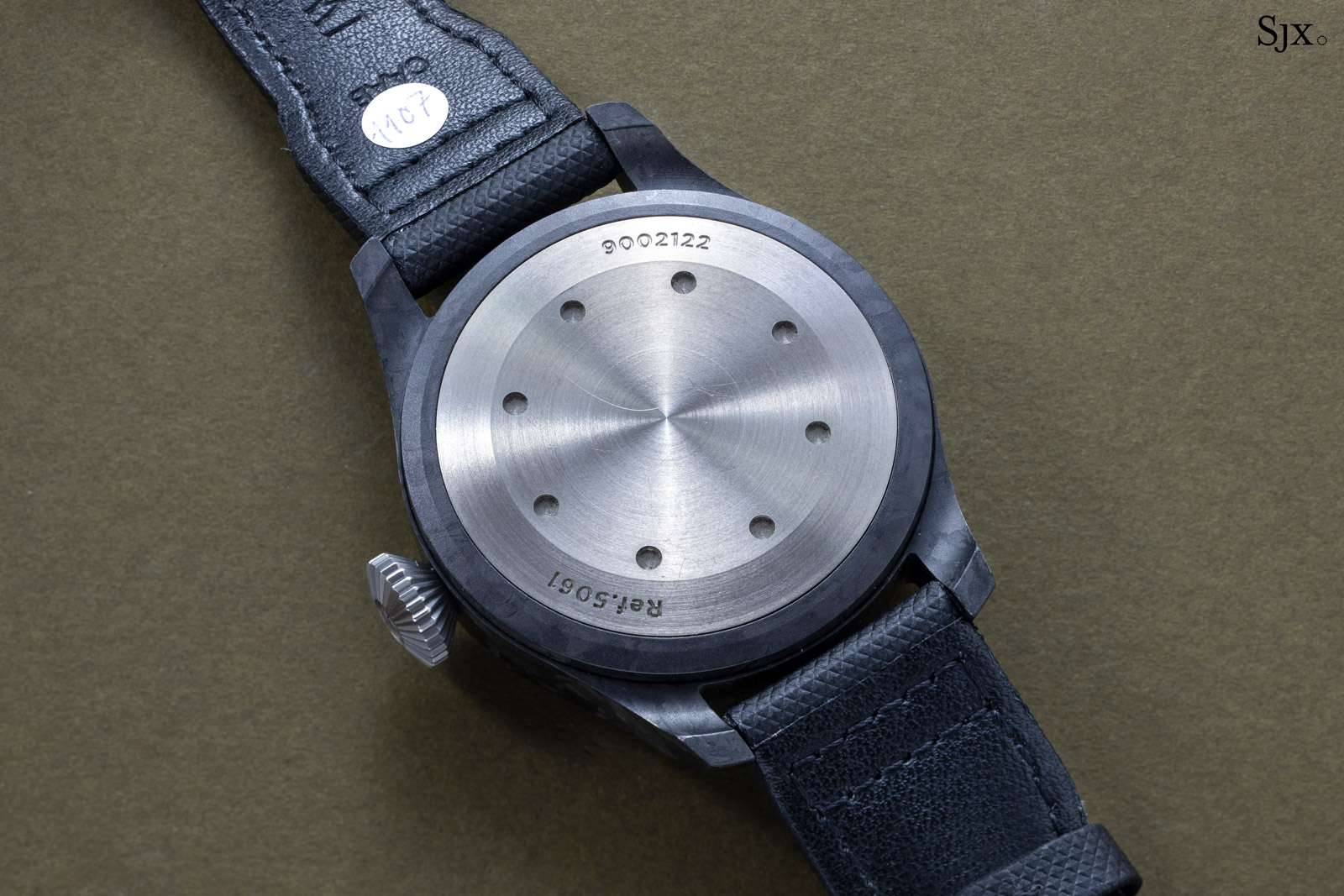 The case back of the prototype is unmarked, but the production version features a large “fish” crown The “fish” crown back of the production version

Still, the Black Carbon is a notable Big Pilot. For one, it’s the first – and will probably be the only – Big Pilot with a carbon composite case.

It helps that it’s also good looking. The marbled surface pattern of the composite case gives the watch an ultra-modern, sporty look that fits the all-black palette well.

That said, the nature of carbon composite means that the case lacks the sharply defined edges and corners of its metal-alloy counterparts, which is perhaps one reason why IWC is unlikely to be repeating this. 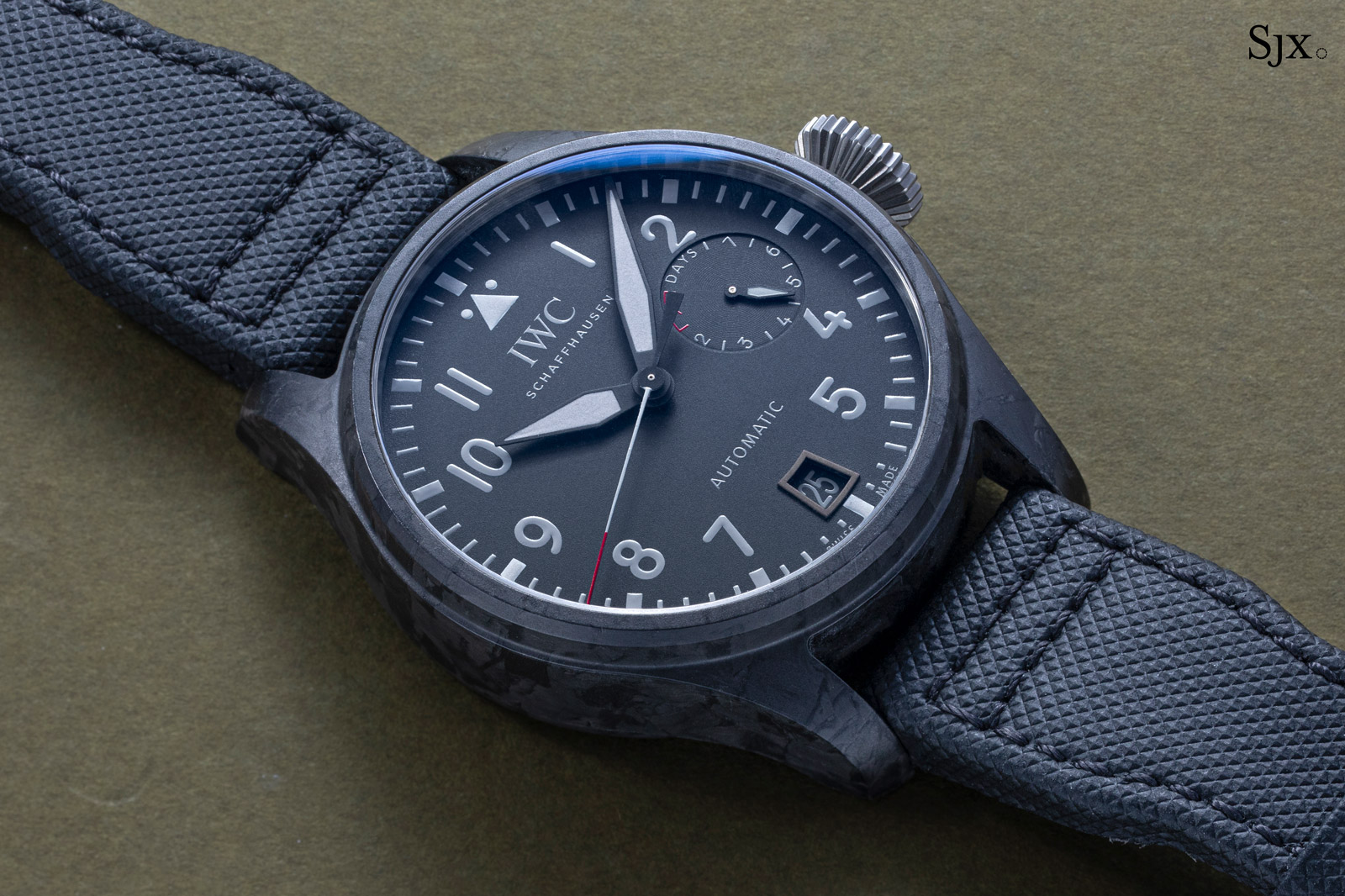 For American readers, the Big Pilot Roadshow is taking place across the United States starting late September. The list of cities and dates is available on IWC.com.