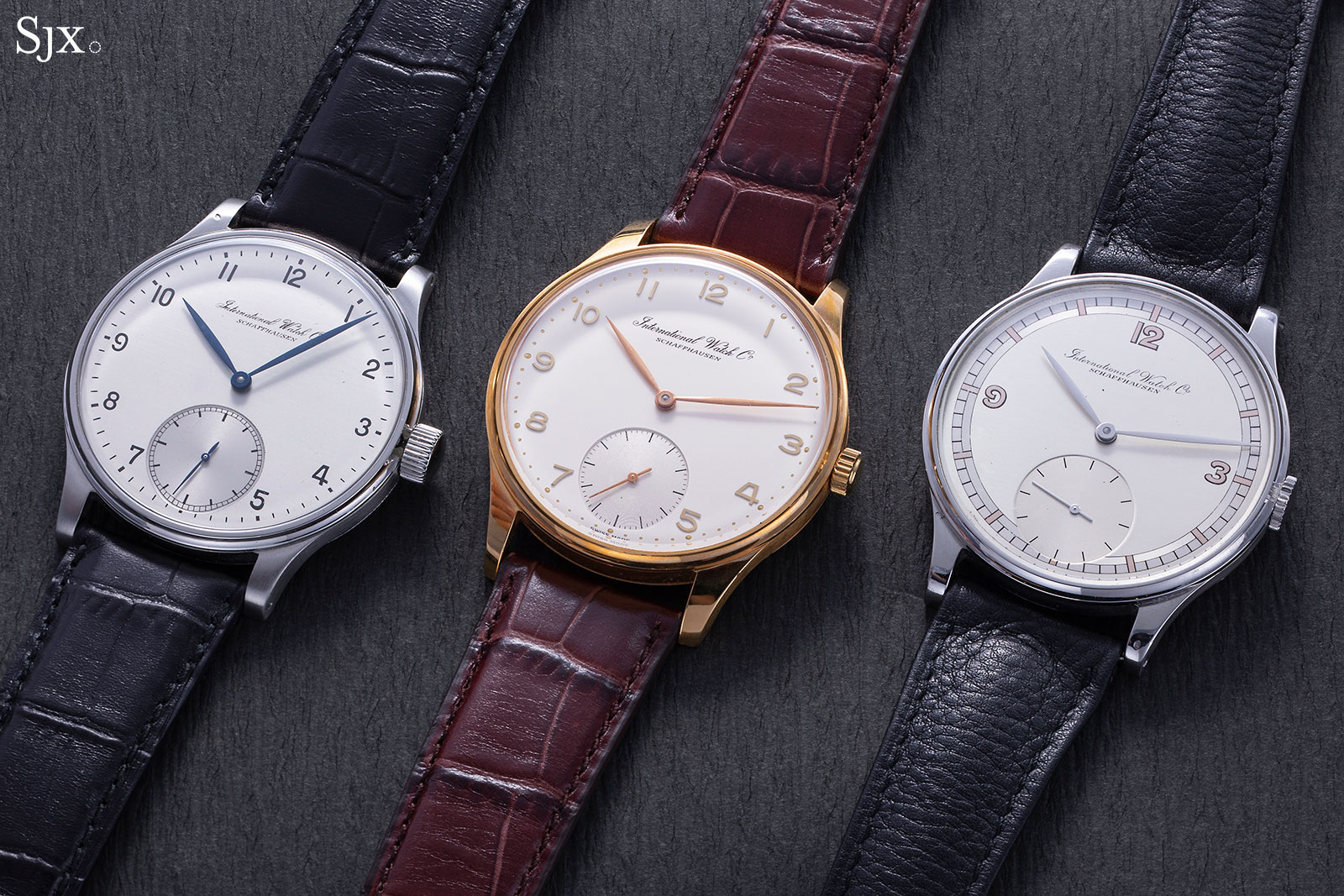 Organised in conjunction with retailer Sincere Fine Watches, Inside IWC History is a walkthrough the milestones of IWC, explained with a series of important watches from the brand’s museum.

Happening at the Ngee Ann City mall from now till October 27, the exhibition is the largest to date held by the brand in Southeast Asia, with some 18 watches on show. The watches detail the three key families of IWC – Portuguese, Pilot’s Watches and Portofino – tracing the lineage with landmark watches. From the legendary Mark 11 to the Portugieser ref. 325, the exhibition showcases some of the most iconic vintage IWC watches, but also includes more recent watches, most notably from the Portofino line-up, which is one of the newest creations. The timepieces on show are an instructive guide through which the brand’s current watches can be better understood. 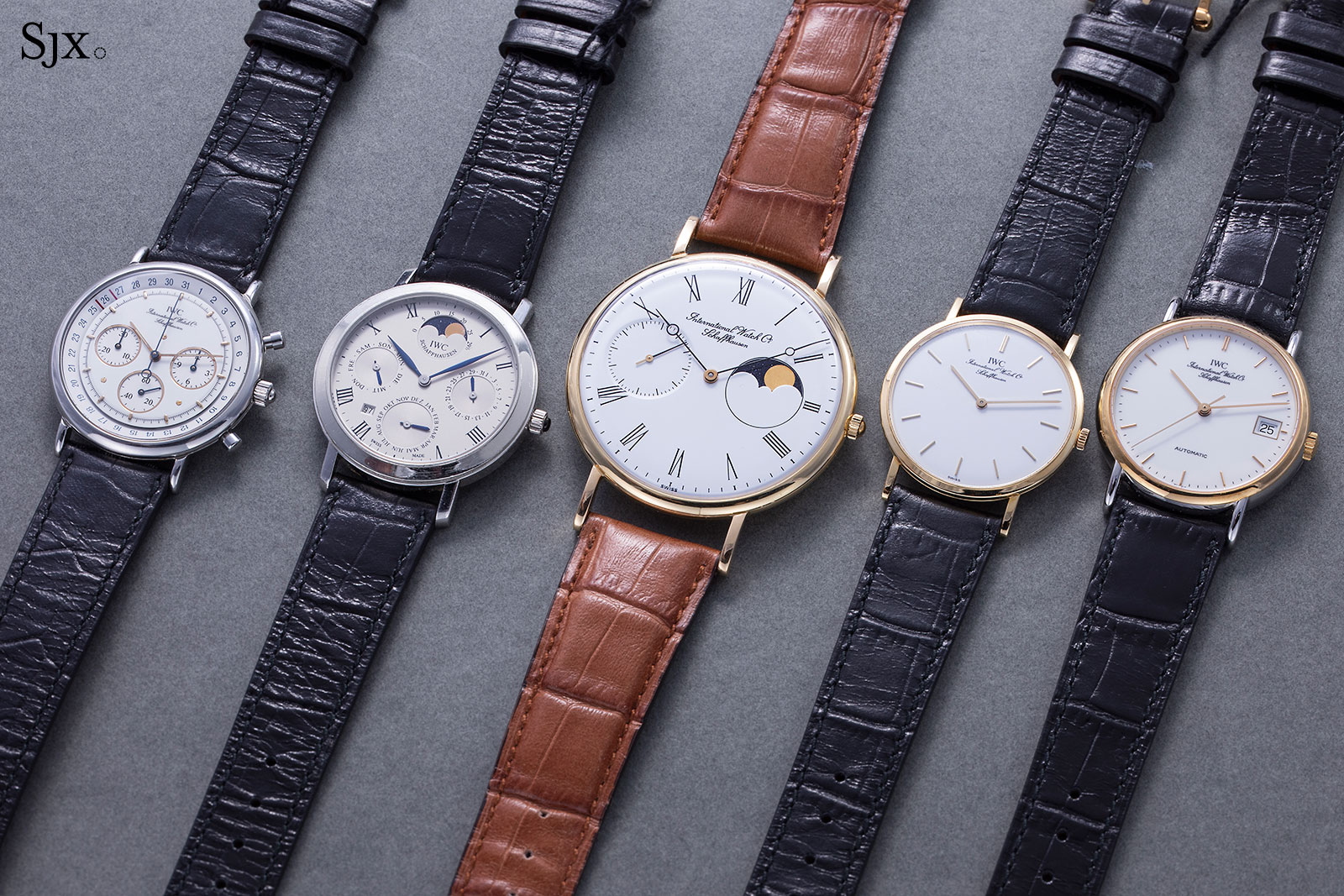 The Portofino line-up, including the significant ref. 5251 (centre)

The first “special watch for pilots”

Wristwatches designed specifically for aviation have defined most of IWC’s 151-year history, and it all began in 1936 with the “special watch for pilots”. Ernst Jakob Homberger, then the managing director of IWC, had two sons who were aviation enthusiasts and licensed pilots, so he decided to produce a watch purpose-built for aviation. 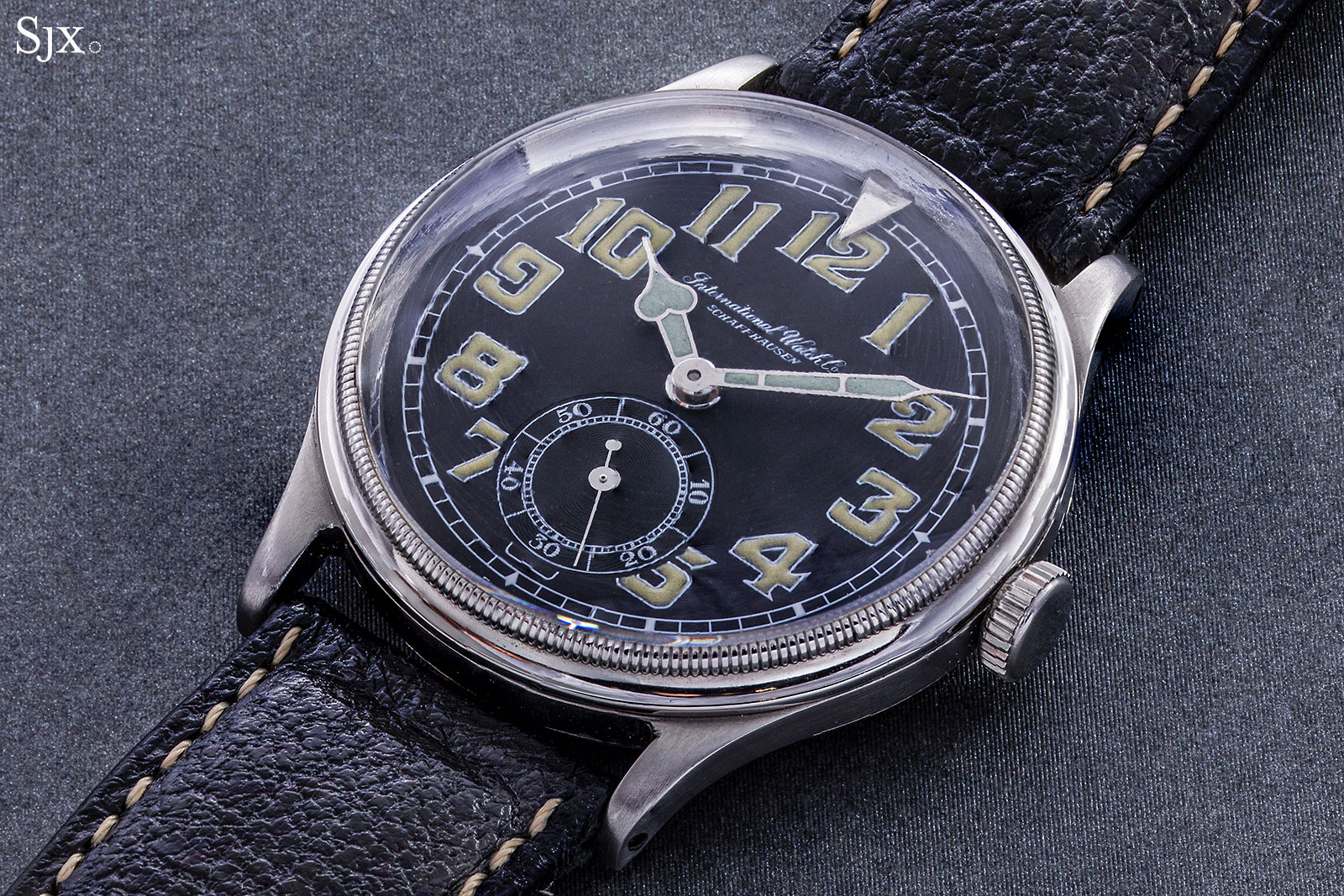 Even though it was intended for civil aviation, the watch was notably robust and advanced. Sometimes known as the “Mark IX” by enthusiasts, it had a 37.5mm steel case fitted with a rotating, fluted bezel that could measure elapsed time, and large Arabic numerals on the dial for great legibility. Most impressively, it was equipped with an anti-magnetic escapement and could withstand tremendous temperature fluctuations ranging from +40 to -40 degrees.

Just four years after the launch of its first pilot’s watch, IWC began supplying the beobachtungsuhr, or B-uhr, to navigators of the Luftwaffe, the second world war German air force. Only five companies produced the B-uhr, IWC and four German watchmakers, A. Lange & Söhne, Wempe, Laco and Stowa. Though the watch was typically made with two dial variations – Baumuster A or Baumuster B (“type A” or “type B”) – IWC only adopted the former. 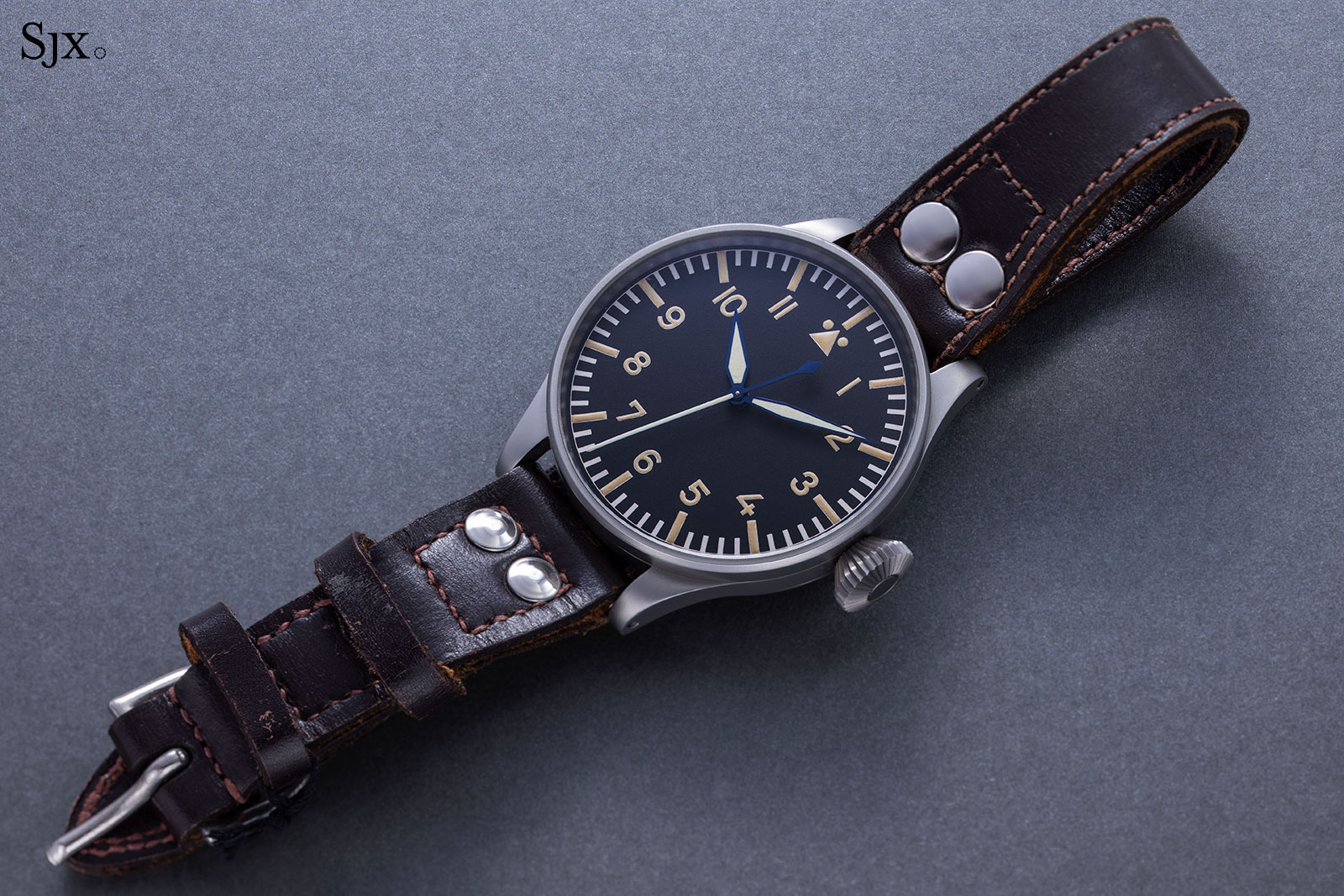 The “Type A” dial featured Arabic numerals for each hour except 12. Instead, the marker was replaced by a large, upward-pointing equilateral triangle with a dot on either side. 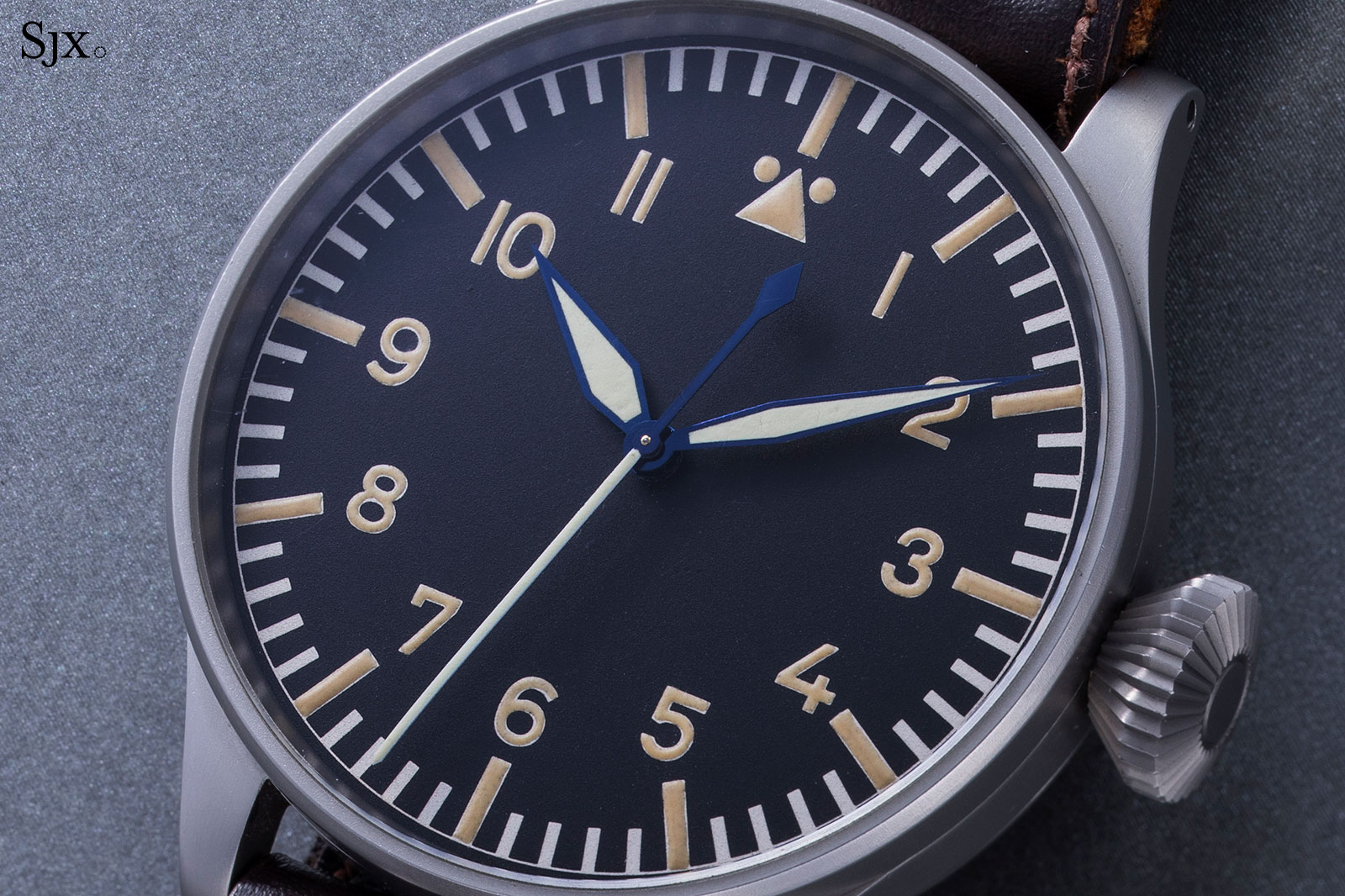 The hands were, by necessity, lengthy due to the massive size of the watch. The case was 55mm wide as it contained the pocket watch cal. 52 T.S.C, originally a movement with subsidiary seconds modified with an indirect seconds train to have a centre seconds. And to aid setting and winding with gloves on, all B-uhr featured oversized, “onion” crowns.

In the 1950s, having proven its credentials during the war, and on the heels of the “special watch for pilots” and the B-uhr, IWC began supplying to the British Royal Air Force (RAF) one of the finest time-only military watches ever. The post-war Mark 11 was a milestone in the history of pilot’s watches for the clarity of its design, and more so for the technical sophistication demanded by the RAF. Inside was the chronometer-grade cal. 89 movement that featured a hacking seconds, and was designed by Albert Pellaton, IWC’s famed watch engineer who also invented the Pellaton automatic winding system.

More crucially, the Mark 11 was the first watch to incorporate a soft-iron cage (or Faraday cage) around the movement to protect it against magnetic fields, a feature deemed crucial due to the increase in high-powered electronics in aircraft. The superior performance of the Mark 11 ensured it remained in service for almost 40 years, up until 1984. 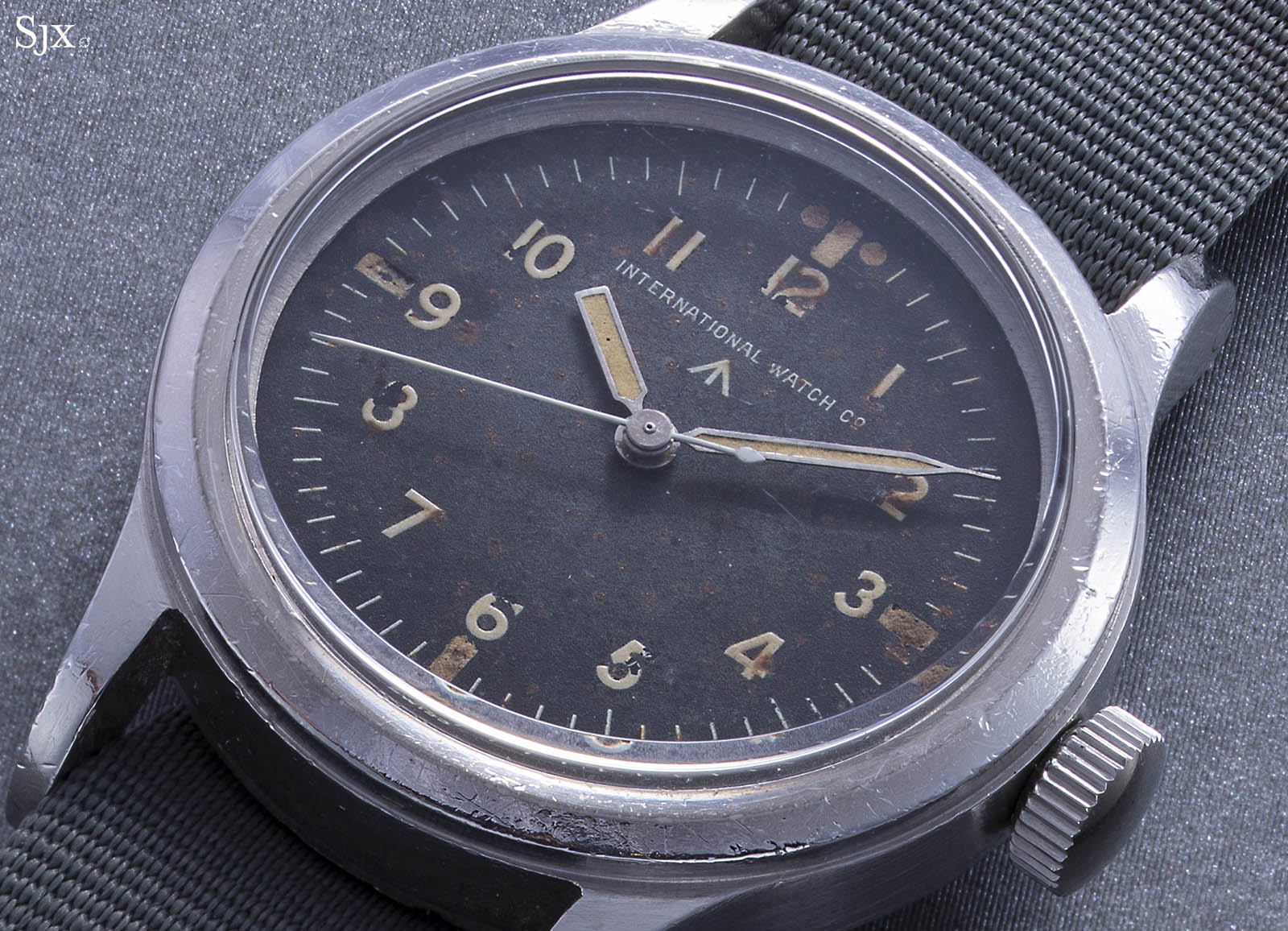 The Mark 11 was originally issued with dinky Bonklip bracelets which were later replaced in 1954 with “NATO” straps. Pictured here is a Mark 11 on Nato with a “12” as well as baton flanked by two dots.

That dial design eventually evolved to have a triangle at 12 o’clock for better clarity, which is found on the second Mark 11 in the exhibition. This also features a broad arrow and a circled “T”, which indicated the use of tritium instead of radium for the luminous paint on the dial and hands. 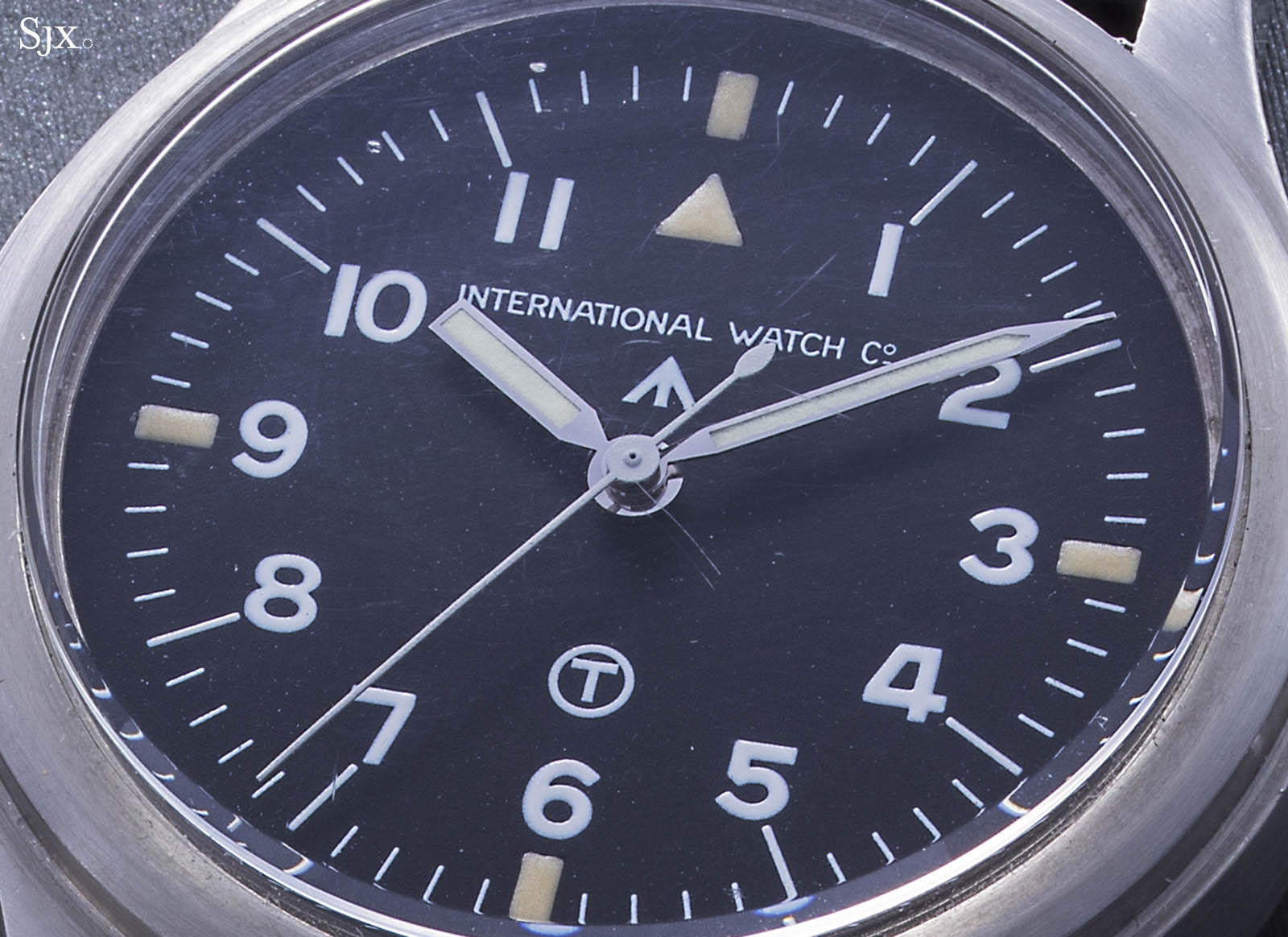 Introduced in 1994 during the late and great Gunter Blümlein’s leadership of IWC, the Fliegerchronograph ref. 3705 was the brand’s first ceramic pilot’s watch. While black-coated cases were more common during that era, IWC was a pioneer in ceramic cases, beginning with the Da Vinci Perpetual Calendar Chronograph of 1986. 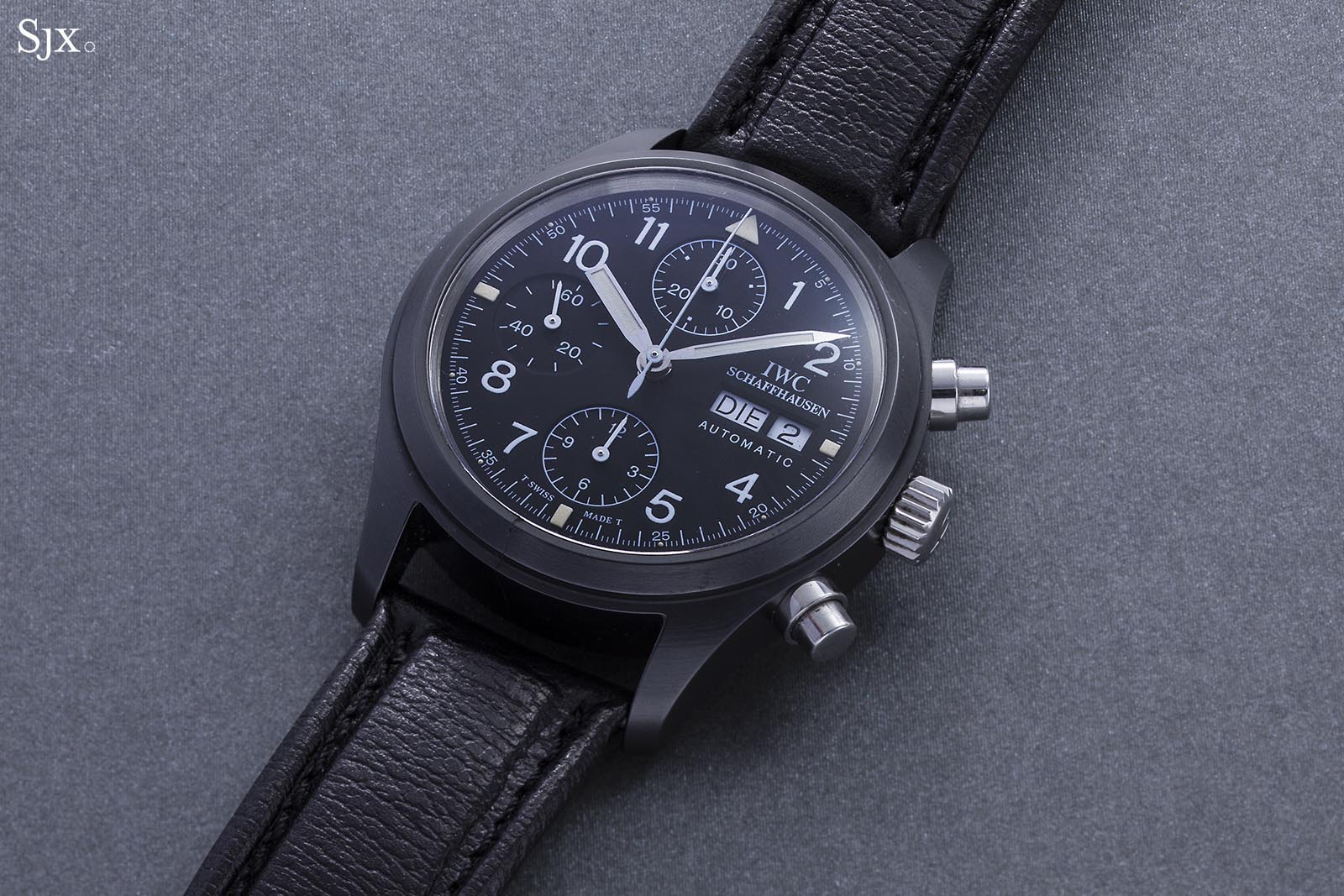 Although ceramic is brittle, it is hard, can withstand high temperatures and resist compression and chemical erosion. As a result, examples of the ref. 3705 still look pretty much the same today, save for the aged tritium markers. 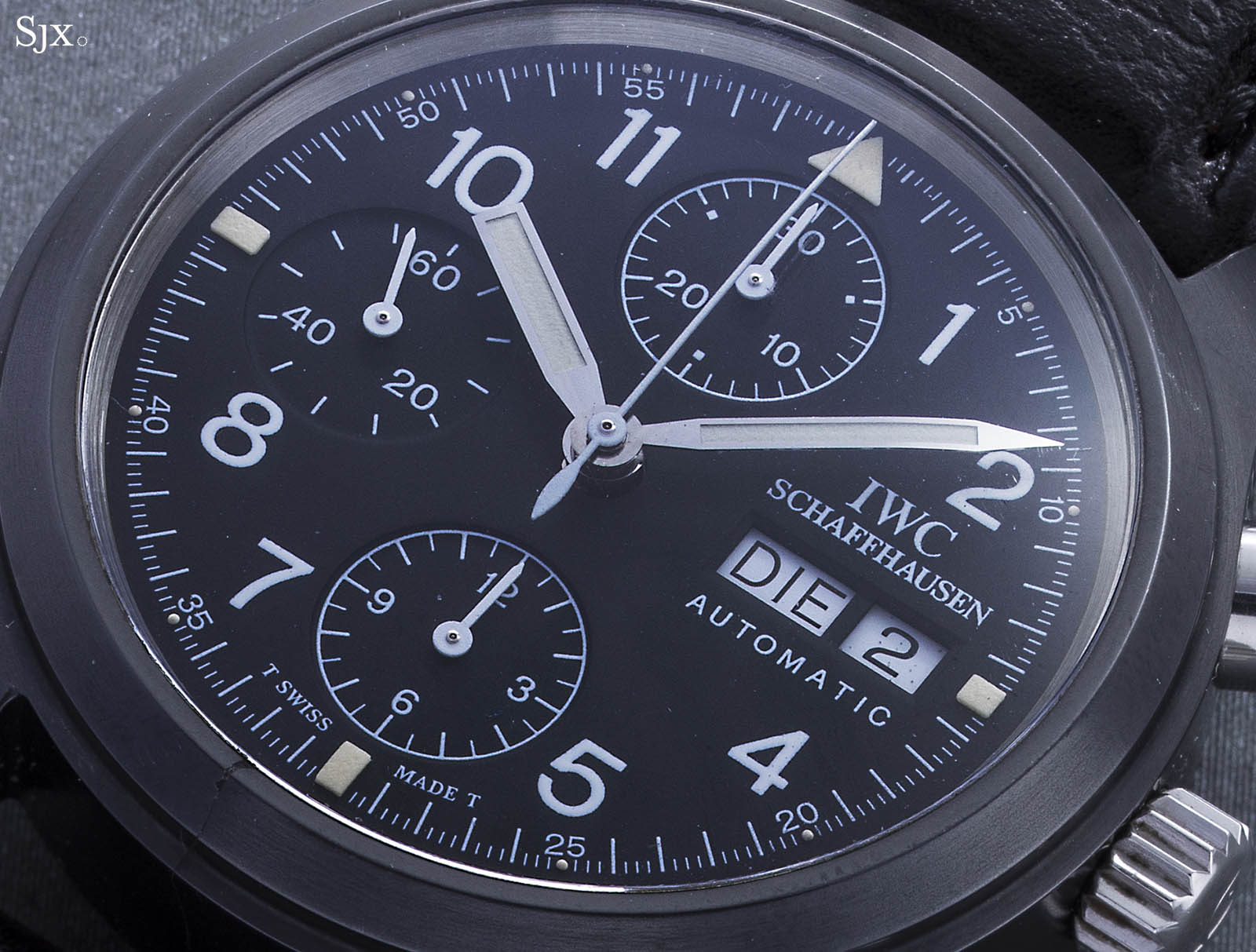 The ref. 3705 was produced for only four years, only 999 were made (with one additional example believed to have been designated as a prototype), as the standard model with a steel case proved more popular. Both the ceramic and steel models were powered by a modified Valjoux 7750.

The watch that inspired the Portofino collection was first introduced in 1984 – though the Portofino name was not adopted until 1988 – with the ref. 5251. A huge watch, even by today’s standards – the dinner plate-like case is 46mm – the ref. 5251 was essentially a pocket watch turned into a wristwatch. In fact, IWC produced a near-identical ref. 5250 pocket watch at the time. Both were equipped with the Lépine pocket watch cal. 9521. Due to the nature of the movement – the winding stem and small-seconds are arranged in a line for a Lepine pocket watch – the small second is at nine o’clock, creating a pleasing symmetry with the moon phase display at three. The ref. 5251 was produced with a white enamel dial paired with a yellow gold case in a run of only 350 examples or so.

Introduced in 1994, the Romana Perpetual Calendar ref. 2050 is still among the slimmest perpetual calendar wristwatches ever made at 3.15mm. Originally known only as the Romana and not yet a Portofino, the watch was powered by the hand-wound, ultra-thin Jaeger-LeCoultre 849 that was combined with the perpetual calendar module invented by Kurt Klaus in 1985 for the Da Vinci.

The case measured just 36mm in diameter, and due to its size, the perpetual calendar mechanism was modified slightly. One of the changes made was the year display: it had a double-digit year indicator instead of a full, four digit year as on the Da Vinci. Perhaps due to its size, which went against the grain of the steadily increasing watch sizes of the 1990s, or perhaps because its sister company Jaeger-LeCoultre had carved out a strong niche for itself with the Master Perpetual Calendar, the Romana was in production for only three years, until 1997.

Following a special request in 1939 by two Portuguese watch agents, IWC began production of a large wristwatch that housed one of the brand’s most accurate and reliable pocket watch movements, the cal. 74, which was then upgraded to become the cal. 98 and eventually the cal. 982.

As opposed to the Lépine cal. 73, the hunter cal. 74 had a savonnette construction, with its crown at a right angle to the fourth wheel that drives the seconds, and thus ideal for a wristwatch.

It was produced with an array of dials, including a sector, a plain dial, and one with a simple railway-track-style chapter ring. Pictured here is a ref. 325 from 1954, which bears a distinctive Portuguese import hallmark on the top left lug. In 1993, the Portuguese was reintroduced in a limited-edition of 1750 pieces to mark the brand’s 125th anniversary. It was made in rose gold (pictured here), stainless steel as well as platinum, and had a transparent case back that showcased the cal. 9828, which was an evolution of the cal. 982.

As with any IWC perpetual calendar, the movement of the Portuguese ref. 5021 is central to the significance of the watch. Introduced in 2003, the ref. 5021 was equipped with the in-house 51612 movement (derived from the cal. 5000 family) that fills its entire 44mm case. It features a Pellaton winding system, a 7-day power reserve but more crucially, it boasts Kurt Klaus’ landmark perpetual calendar module. The perpetual calendar mechanism is notably comprehensive, featuring the day, day of the week, date, month, four-digit year, and double moon phase displays that move and adjust in perfect sync. Even better, all of the adjustments are performed via the crown. All functions of the mechanism were the same as the Da Vinci with one exception; it had a double moon phase display that is accurate to a day in 577 years versus the standard 122.5 years of the Da Vinci. This is because the larger diameter provided room for more teeth on the moon phase gear.

The IWC limited-edition Portugieser Automatic 2000 was launched in the year 2000 in platinum, red gold and stainless steel. This example is one in stainless steel with a “reverse panda” dial. Importantly, the Portugieser 5000 was the first IWC wristwatch with a movement, the cal. 5000, that was fully conceived in-house, marking a new chapter for the brand. The cal. 5000, with a small seconds at nine o’clock and a power reserve indicator at three, was a technically interesting, large-diameter movement that not only had a seven-day power reserve but it also revived the Pellaton winding system. This time, the system had two winding pawls instead of one, each winding the large mainspring depending on the direction of the rotor’s motion.

Inside IWC History takes place at the Ngee Ann City atrium from now till October 27. It’s open daily from 10:00am to 9:30pm, and admission is free.