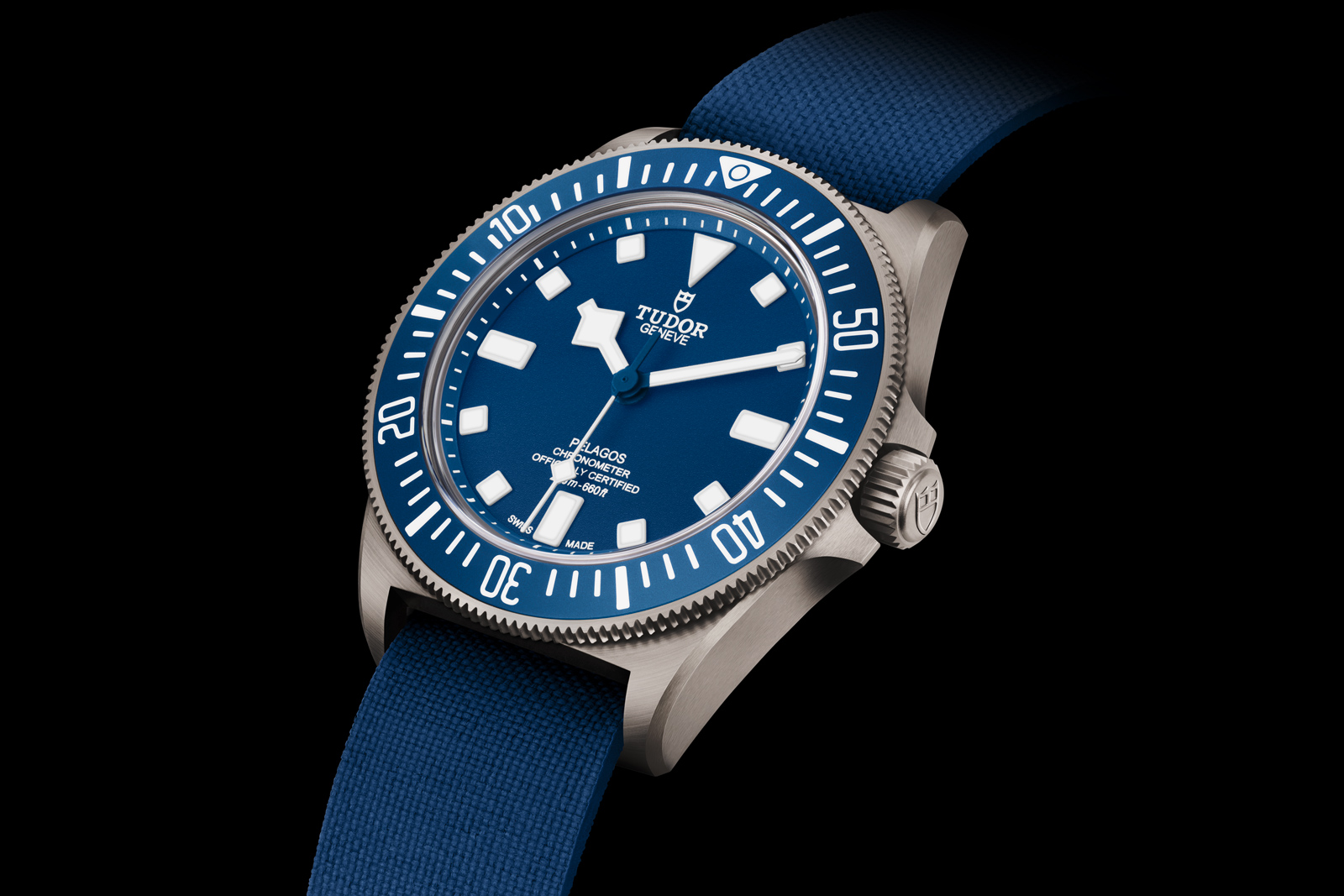 Earlier this year Tudor resurrected its partnership with France’s navy, the Marine Nationale, some two decades after it last supplied military-spec Submariners to the navy’s divers.

Now the brand has finally revealed a project two years in the making, the Pelagos FXD “Marine Nationale”. Developed together with the members of the Commando Hubert, the navy’s elite combat divers, the Pelagos FXD is an actual military issue timepiece – the unit’s divers wear the same watch during operations – with fixed bars and a no-nonsense aesthetic. 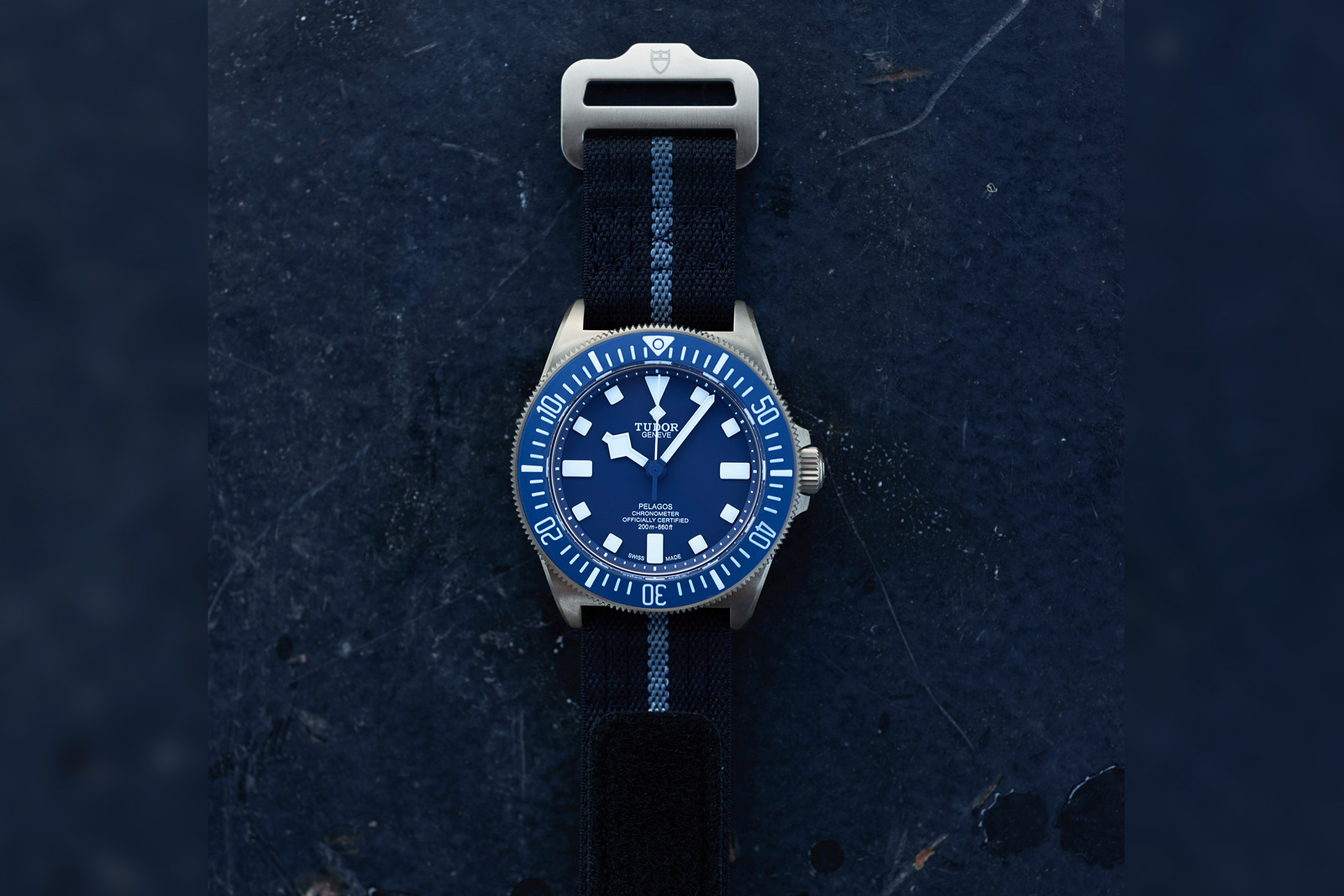 The Pelagos FXD is a time-only diver just like the Submariner ref. 9401/0 “MN” issued to divers of the French navy in the 1970s

Images of a Commando Hubert graduation ceremony appeared online several months ago, revealing the watch. So the Pelagos FXD was expected, but still manages to surprise. It is clearly a nod to the ref. 9401/0 “MN” of the 1970s – nicknamed “snowflake” after its hands and dial – and is as close to a vintage Submariner as a modern Tudor can be. But it still has a few extras appeal to military watch aficionados. 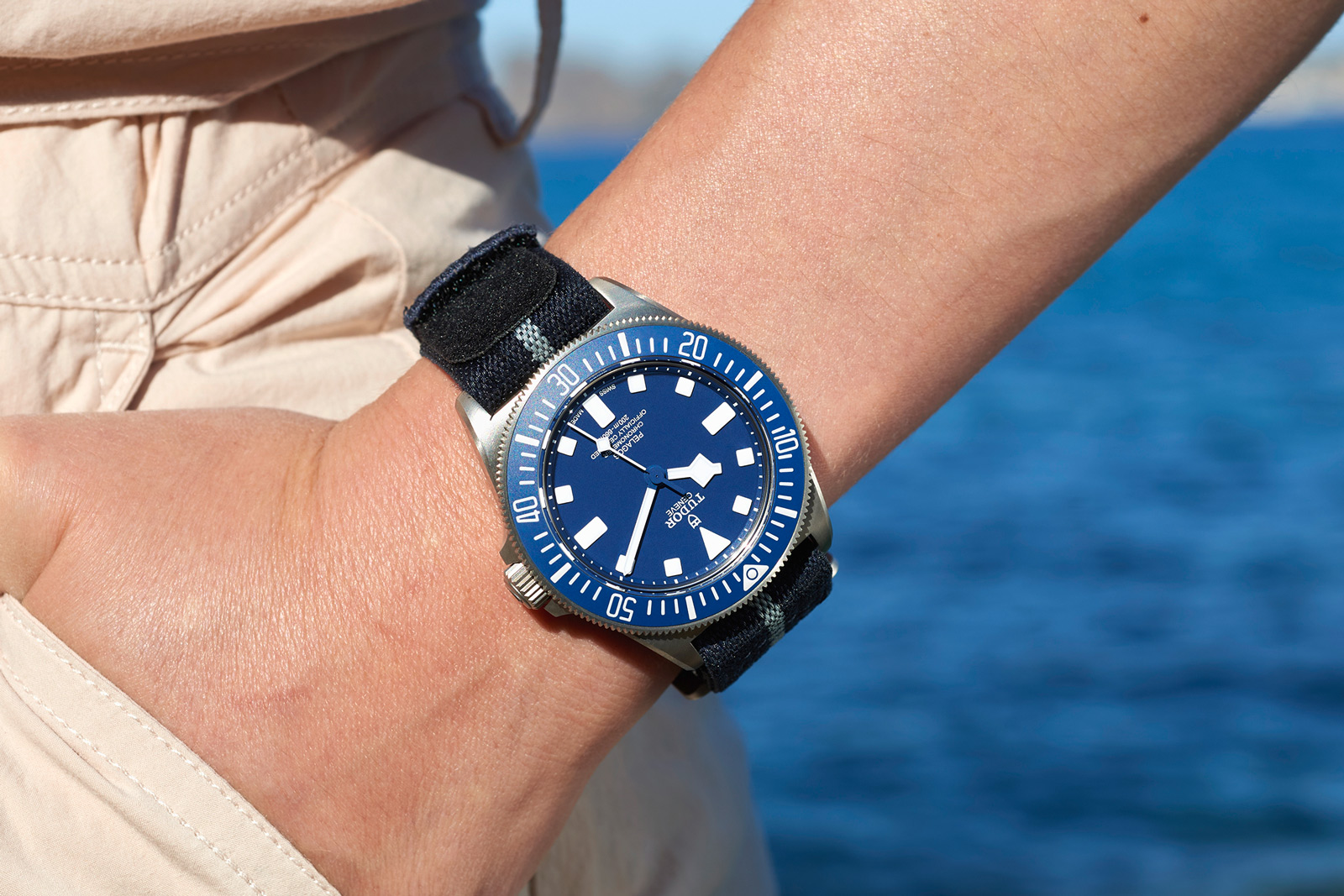 Most notable are the lugs, which are a reinterpretation of the fixed bars found on vintage military-issue dive watches. They form one piece with the case, making the connection between the case and strap far more robust. It’s certainly over-engineered for anyone who isn’t a combat diver, but it is a genuine element that’s neither decorative nor artificial.

In fact, the fixed lugs arguably put the Pelagos FXD in the same category as the quirky P01 – both are “tool” watches that are clearly catered to a niche audience, though the Pelagos FXD is the only one that is legitimately military spec. 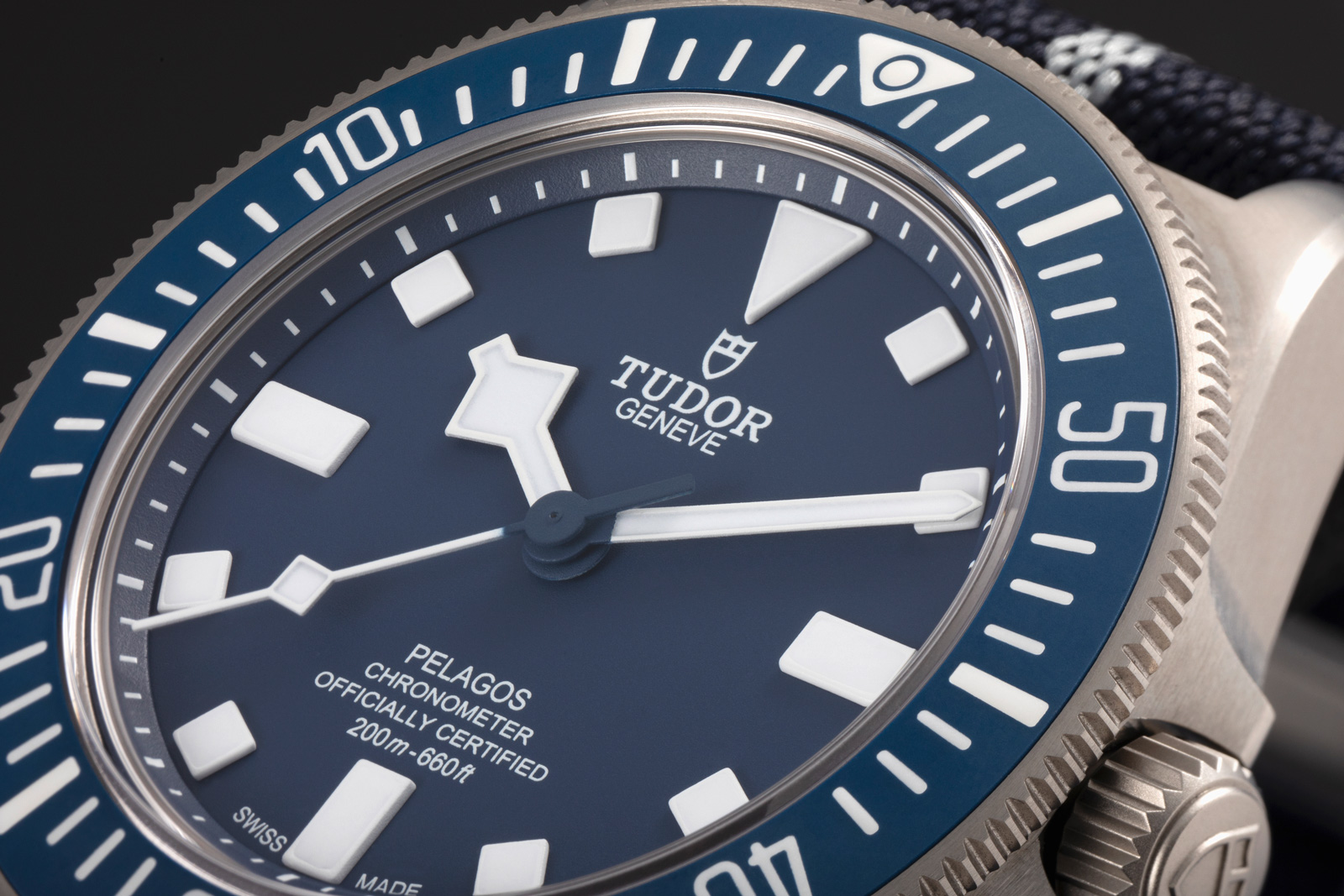 Another important detail is the omission of a date, which is a first for a Pelagos since its debut in 2012. And the bezel is entirely new, being a bidirectional, countdown bezel that is slightly wider than usual – a crucial tool for combat divers performing underwater navigation.

And because the date has been omitted, the Pelagos FXD is 1.5 mm thinner than the standard model, giving it a surprisingly flat profile on the wrist for a true “tool” watch. 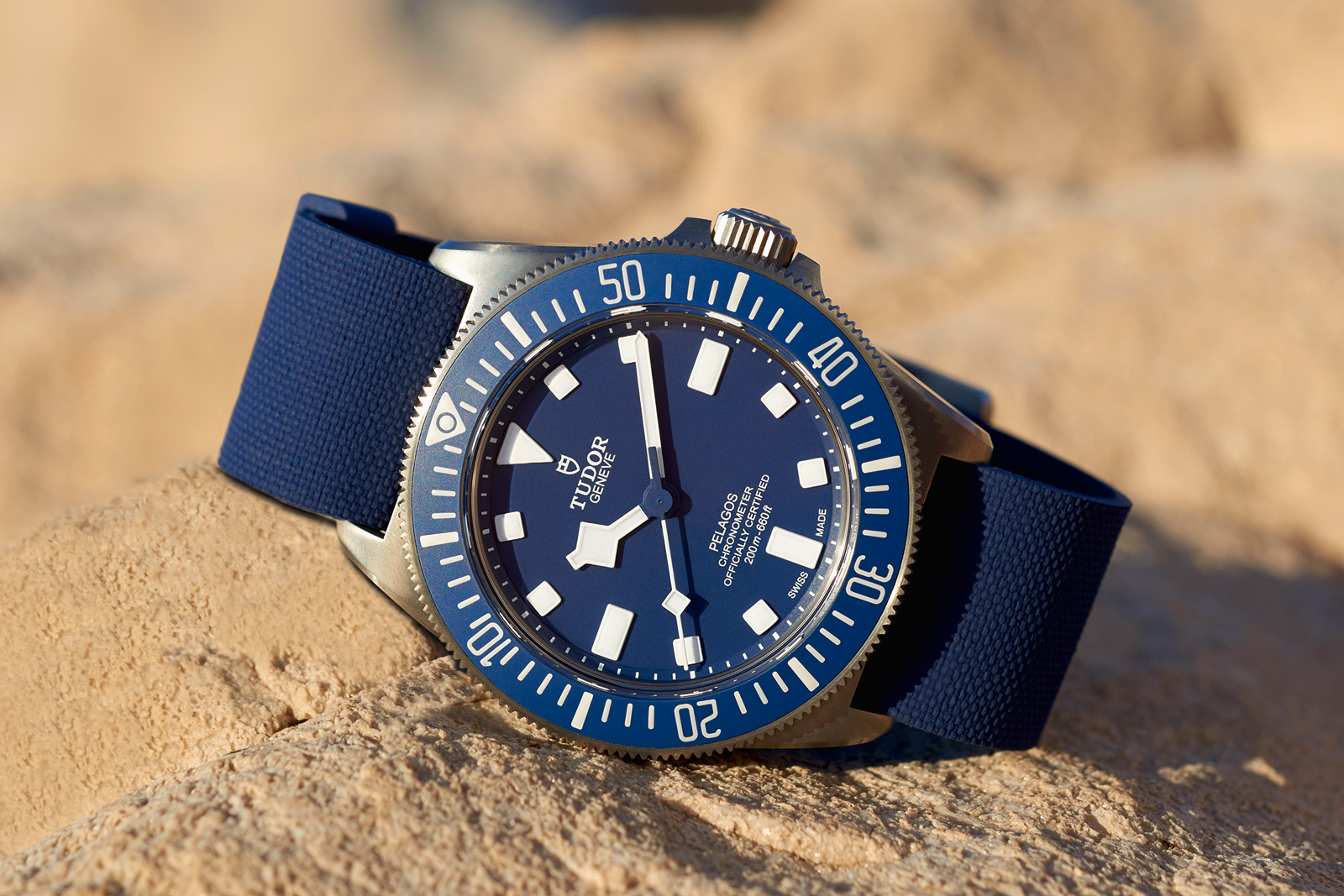 The FXD on the rubber strap, which has a conventional pin buckle

Can the Pelagos FXD get better? Maybe but not by much. It has a water resistance of 200 m, which is more than enough for combat divers – the vintage Submariner “MN” had the same rating – but less than the 500 m of the standard Pelagos. At the same time, it isn’t METAS-certified like the Black Bay Ceramic launched a few months ago.

At US$3,900, the Pelagos FXD is competitively priced just all Tudor watches. In fact, it’s one of the brand’s highest-spec’d watches, making it one of Tudor’s most compelling offerings. 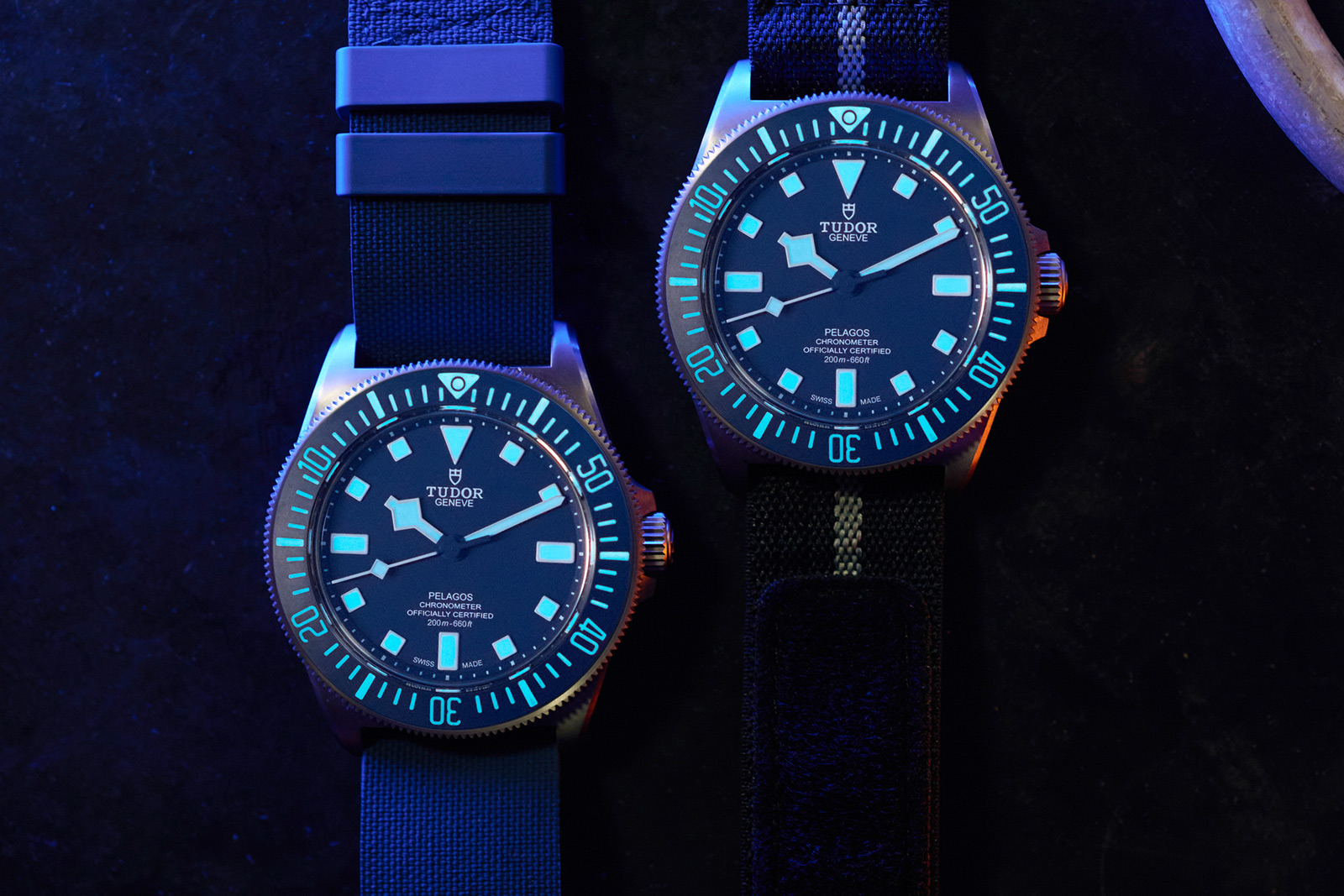 Tudor started supplying watches to the French Navy almost since the brand started making dive watches. In fact, the relationship began in 1954 – just a year after Rolex introduced the Submariner – when it supplied the navy with the ref. 7922, the brand’s first-ever dive watch.

But the quintessential Tudor military-issue diver is definitely the Submariner ref. 9401/0 “MN” that two decades later. Crucially, the ref. 9401/0 had a few features that set it apart from a Rolex dive watch, making it unique to Tudor. Most obvious are the blue dial and bezel, but the “snowflake” hands and square markers are its defining feature.

Being the iconic dive watch of the French Navy, the ref. 9401/0 “MN” was a natural choice as the inspiration for the Pelagos FXD. 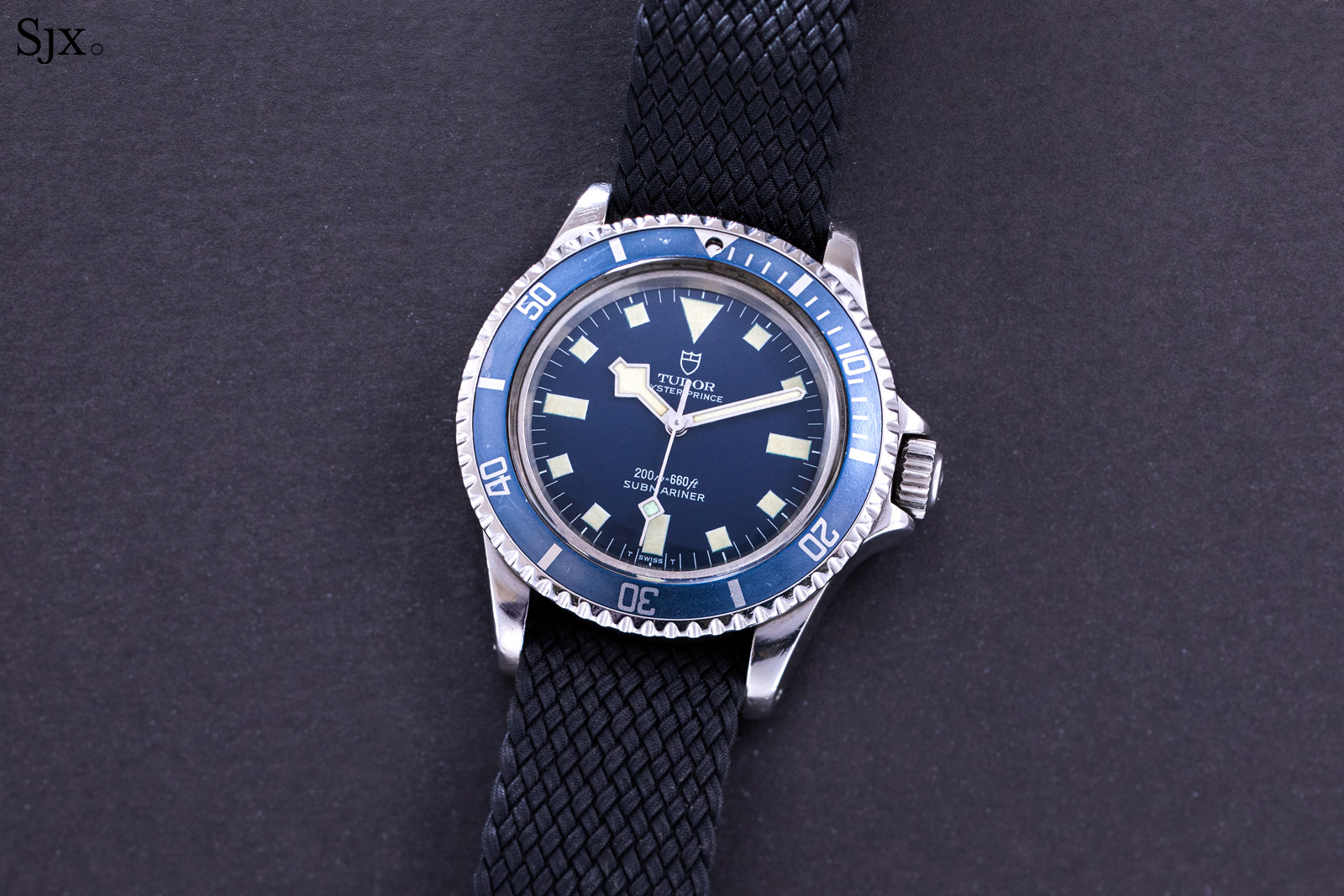 One of the most important historically inspired details is the engraving on the case back, which is unusual for a modern-day Tudor, which typically have plain backs.

The back is engraved with Marine National logo, and also “M.N.21”, short for “Marine Nationale” and the year of production, a reference to the French navy’s numbering convention on the vintage Tudor “MN” watches. 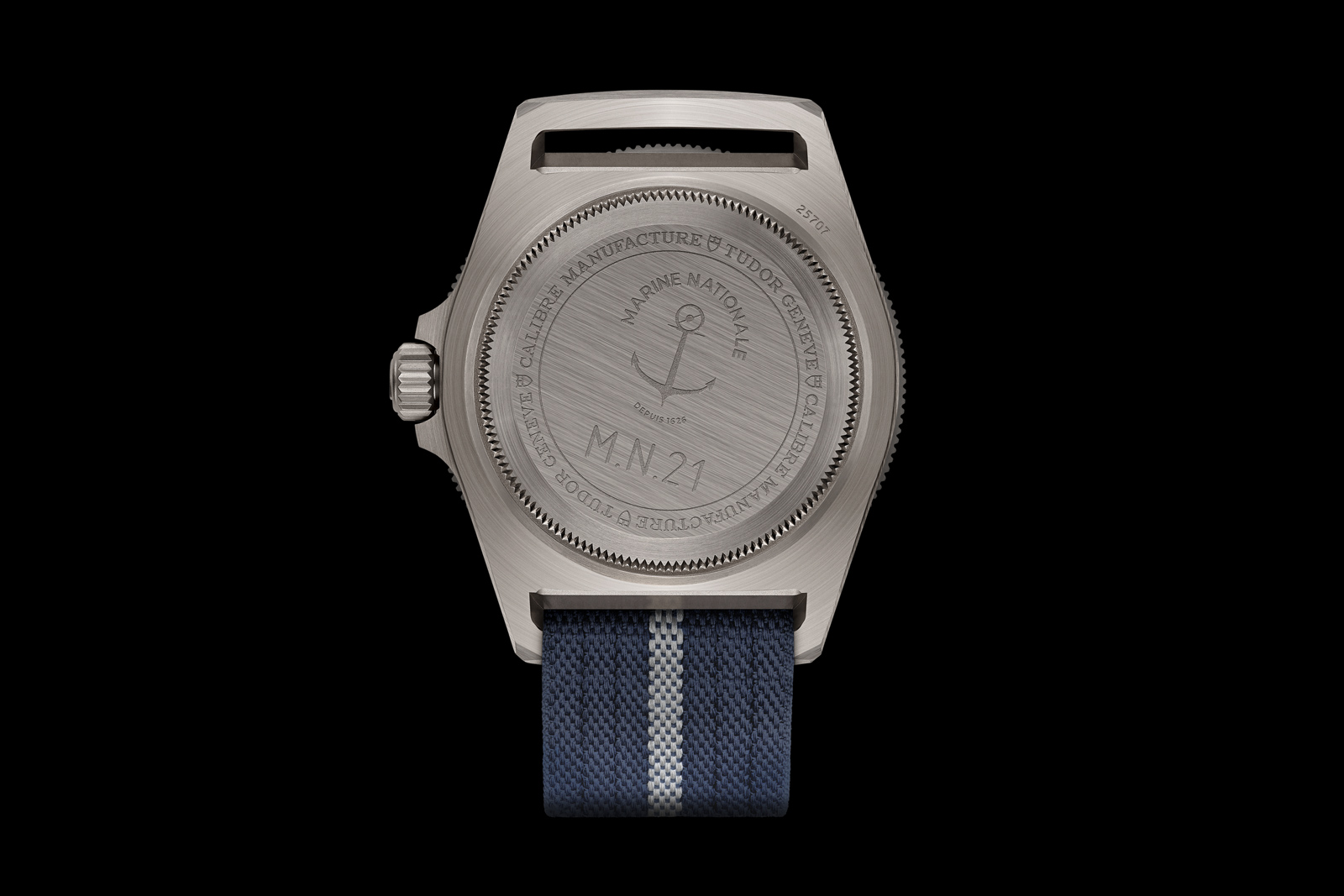 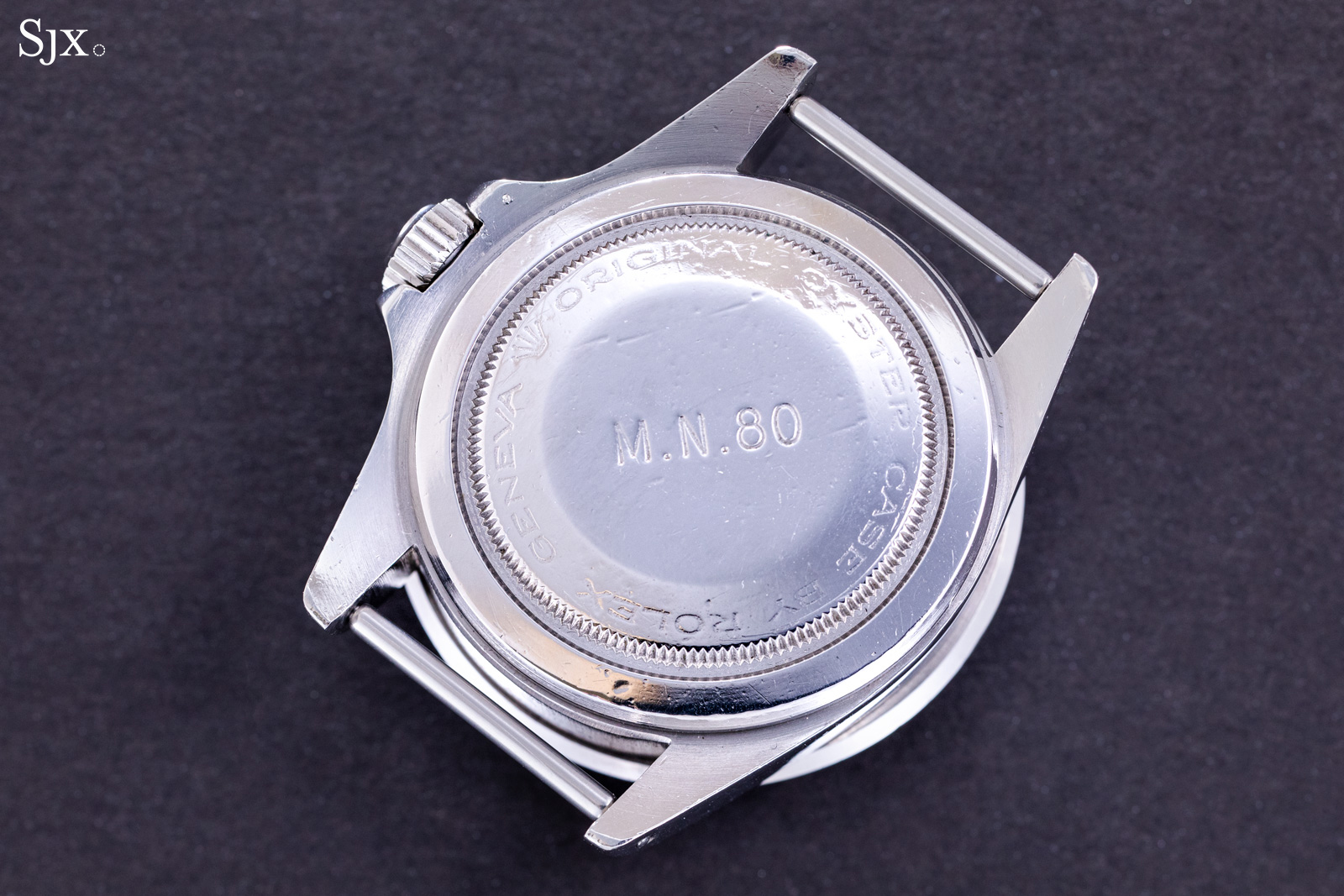 Vintage military-issue dive watches were similarly marked with “M.N.” followed by the year of issue, for instance “80” 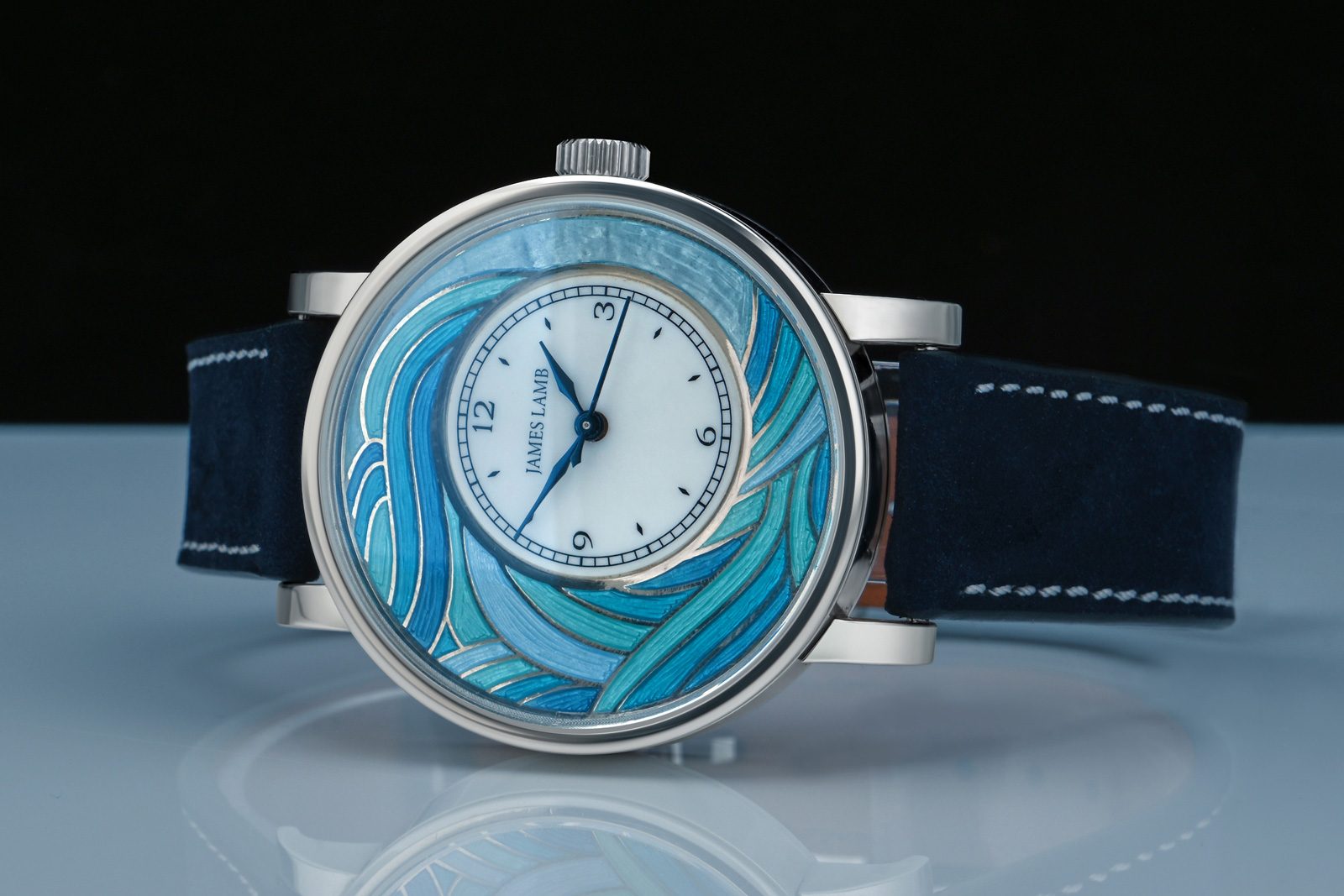 An engineer by profession who was accredited as a watchmaker by the British Horological Institute (BHI) a decade ago, James Lamb has just launched his eponymous brand with the Origin.

Because he operates a workshop fully equipped with lathes and jigs, Mr Lamb is able to make his own cases and crowns. He even supplies the winding crown for American guillocheur J.N. Shapiro’s watches.

Naturally, Mr Lamb makes the case of the Origin, a simple, classical wristwatch that is largely artisanal, save the hand-wind Sellita movement within. The case is made from a block of silver – mostly with traditional tools – while the dial is champlevé enamel with white ceramic insert. Quirky but restrained, the Origin is a rather interesting propositional relative to most offerings in its price range. The enamel dials are striking in colour and also appealing in style thanks to the separation of the enamelled and time-telling sections, which makes it easier to admire the enamel and read the time.

But the highlight, at least from a technical perspective, is the case, because few independent watchmakers fabricate their own cases. Made of Argentium – a tarnish-resistant silver alloy – the case is fabricated with traditional tools such as a lathe. Because it is hand made the old fashioned way, the case can be customised almost entirely, resulting in a range of case diameters from 37.75 mm to 39.5 mm, in 0.25 mm increments. 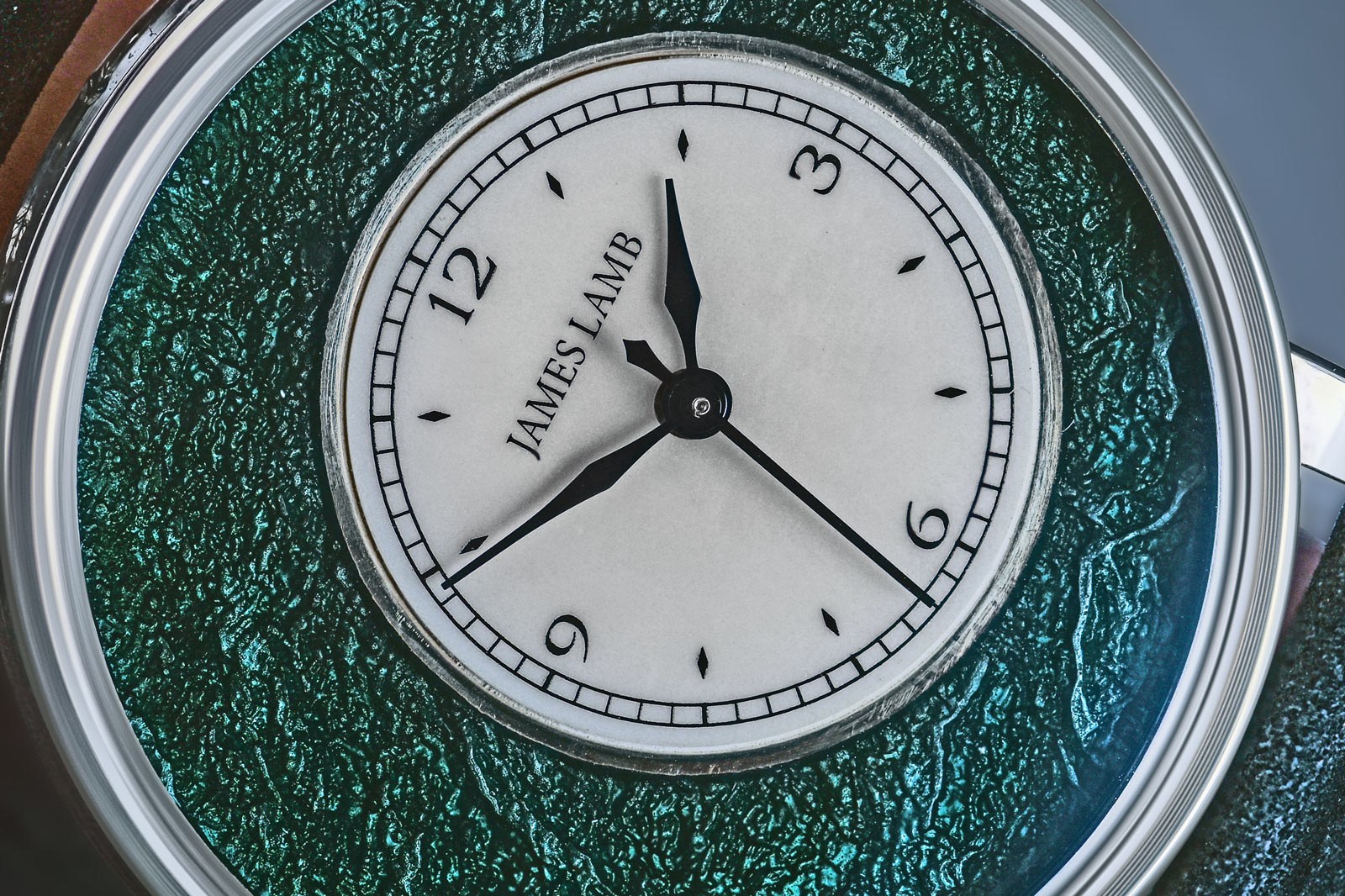 Unsurprisingly given its artisanal nature, the case is simple in form and design. That, along with the fuss-free Sellita calibre, might make it less compelling for a movement-focused collector. That said, the enamelled dial and case are unusual and appealing in terms of craft.

Priced at around US$9,500, the Origin might seem pricey for the mechanics, but it is a reasonable proposition considering the challenges of case fabrication, especially for a one-man, independent outfit.

The name of the watch is a reference to its inspiration – traditional watchmaking.

The case certainly takes that inspiration seriously. In a series of images on his website, Mr Lamb illustrates the process of case making, starting with a thin, rectangular strip of silver that is bent into a ring, forming the blank for the case middle. The ring is then soldered shut to form a closed loop.

At the same time, the lugs are profiled and soldered to the case, creating a distinct transition between the case middle and lugs. 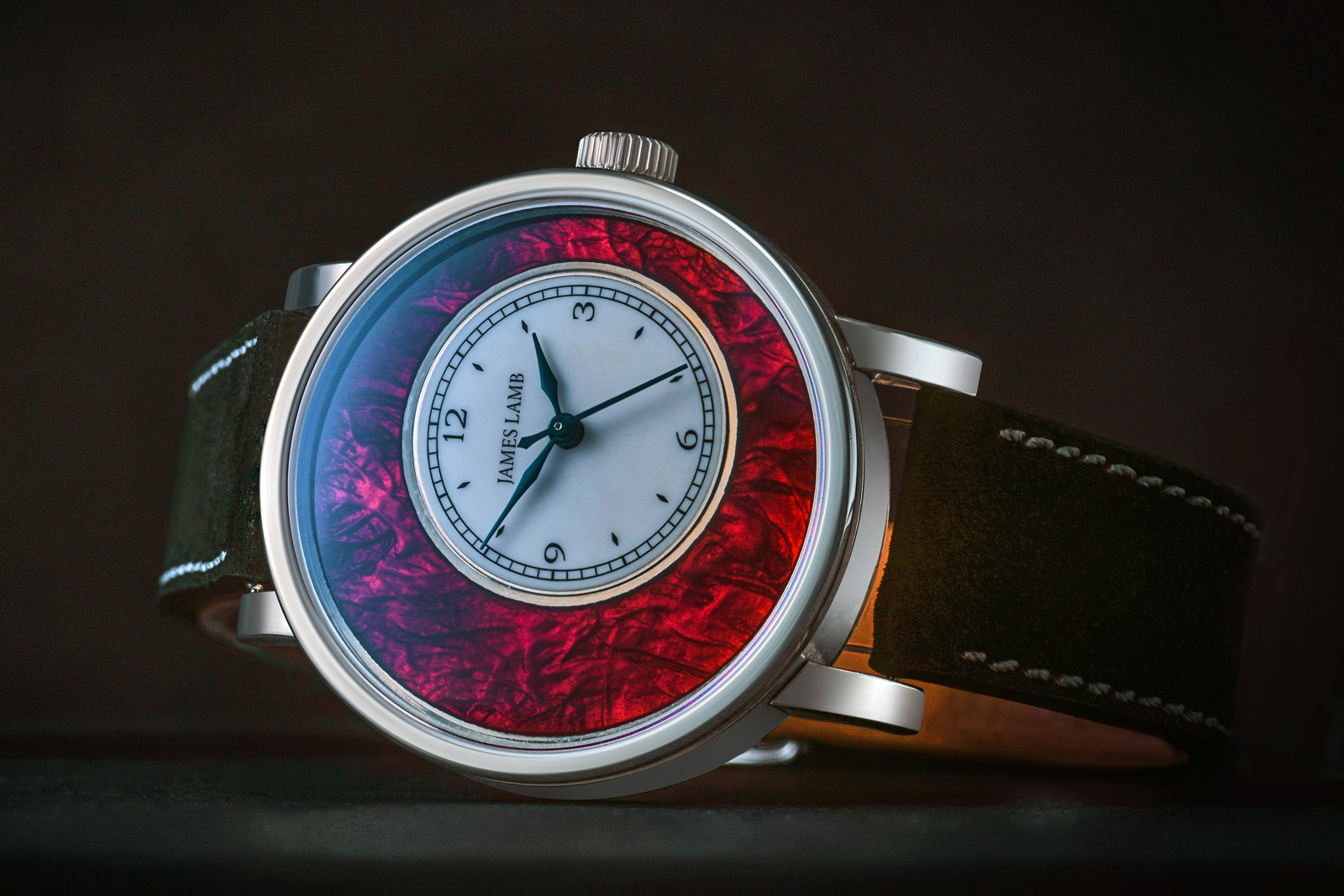 Notably, the dial blank and movement ring are also made in house. The movement ring is unusual as it has an asymmetric cut-out to accommodate the off-centred movement.

The solid silver dial blank is milled to create two recesses, one for champlevé enamel and the other for the white ceramic insert.

While the blank is made by Mr Lamb, the enamelling is done by another English workshop. Four enamel dials are available, each in a different colour and motif inspired by the elements of ancient Greek, namely air, water, fire, and earth. The only stock element of the Origin is the movement, albeit one that’s been finely regulated and lightly decorated. It’s a Sellita SW 210, which is based on the ETA 2801.