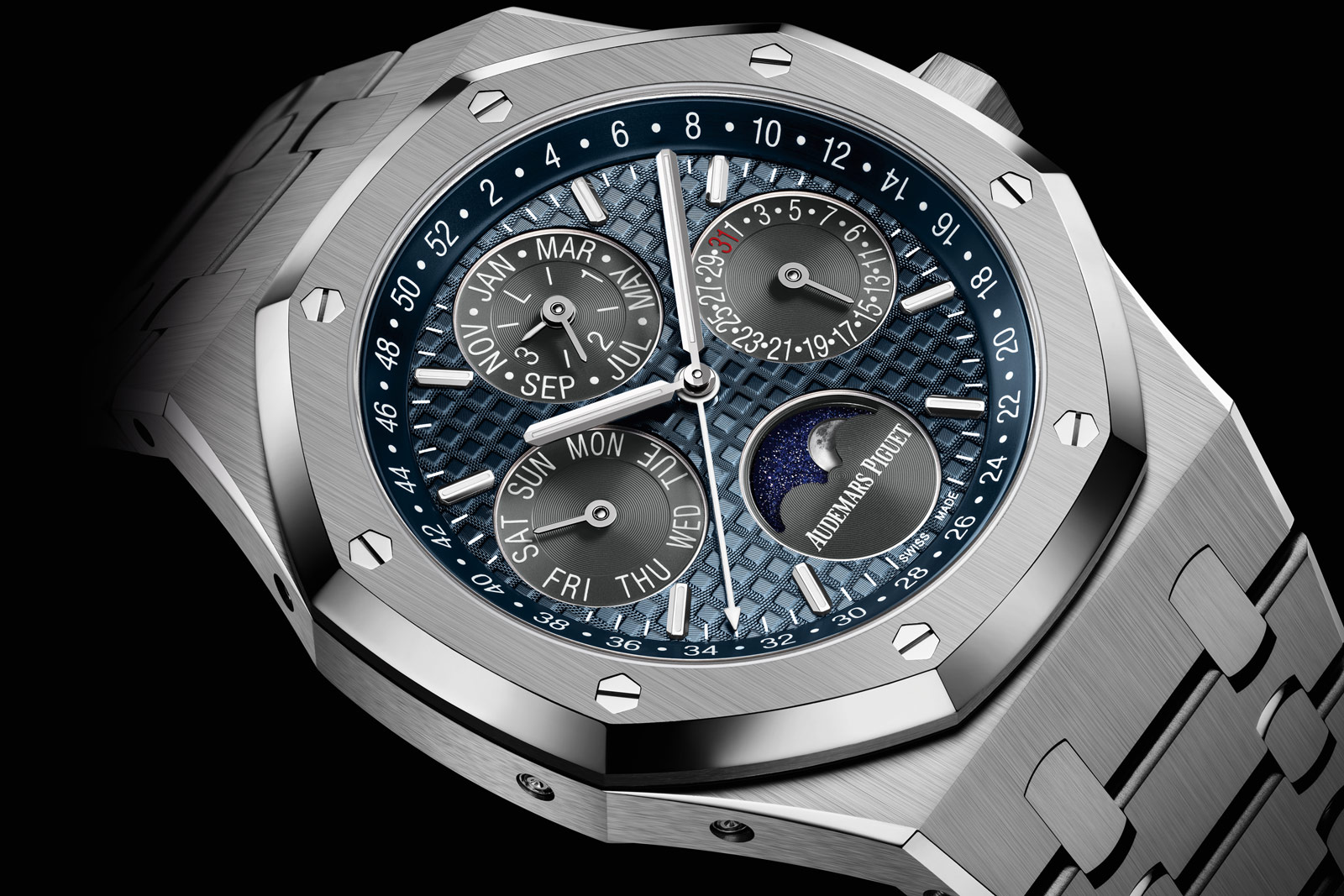 And the brand has just taken the covers off a special edition for the American market (at least initially, with other countries getting a shot at the watch later on): the Royal Oak Perpetual Calendar 41 mm in titanium with an unusual, two-tone tapisserie guilloche dial in grey and blue. 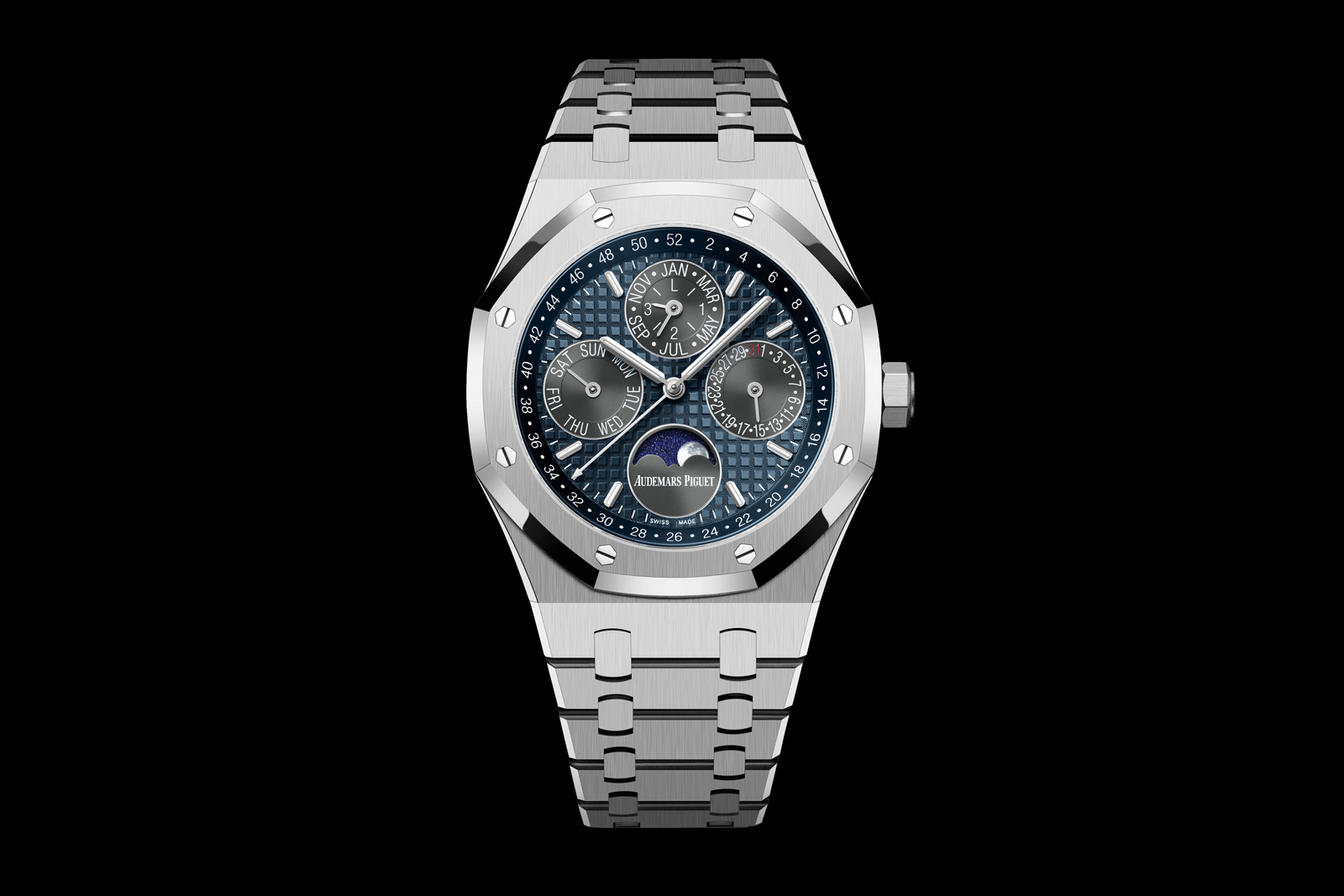 The blue tapisserie dial is so familiar that the new Perpetual Calendar doesn’t seem new on its face. In fact, it might pass for the steel version with a blue dial, with only the grey sub-dials setting the two apart. That said, the latest Royal Oak perpetual is a good-looking watch, with a handsome, restrained style and colours that echo the original “Jumbo” ref. 5402.

Traditionally, Royal Oak Perpetual Calendars have sub-dials that match the dial, but contrasting calendar registers actually makes sense since they distinguish between the functions. The two-tone dial on the latest model does that, while adding visual contrast. At the distance the two colours might not be obvious, but they will certainly be apparent up close. 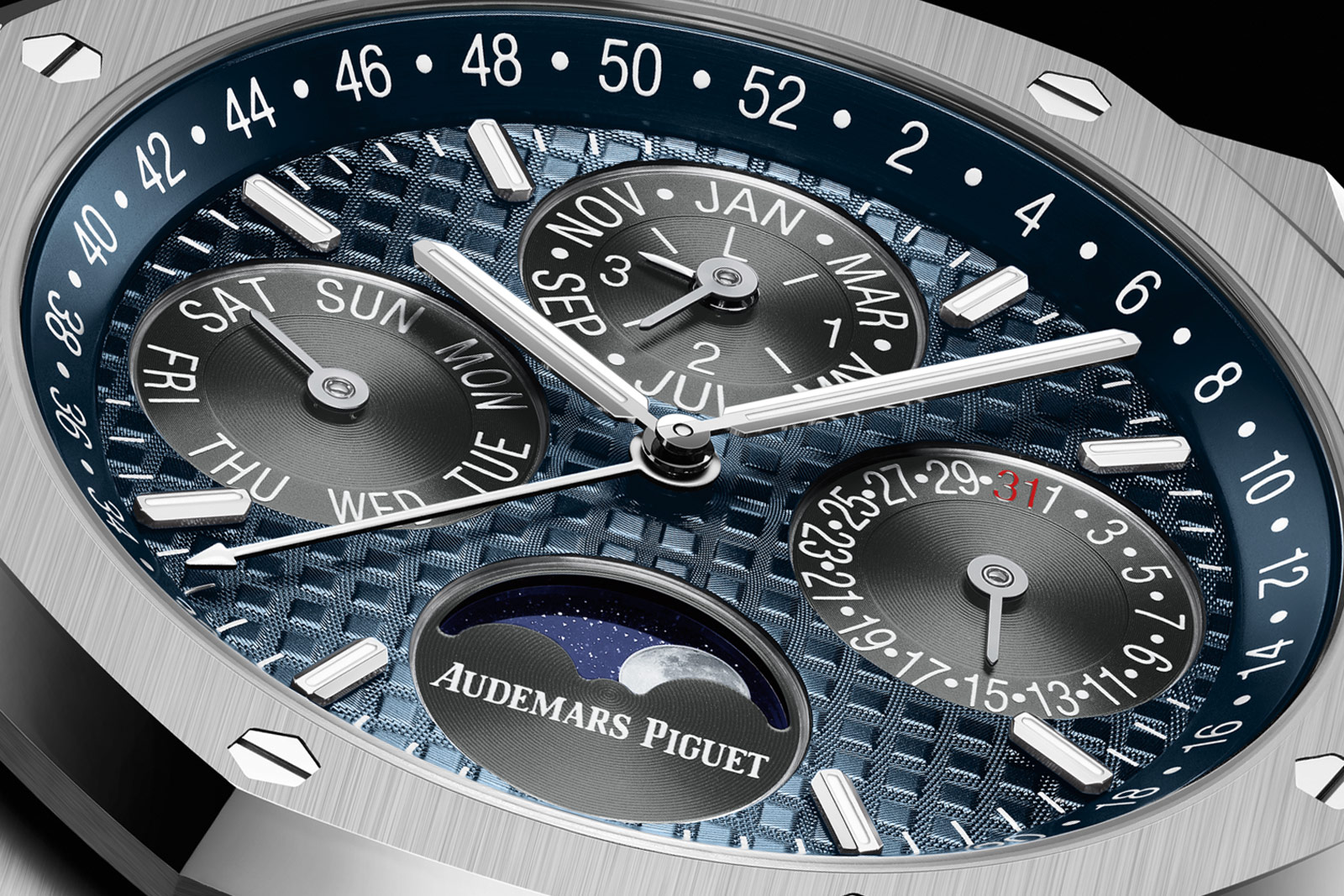 The hands and markers are white gold

In addition to the contrasting sub-dials, the case metal is also relatively uncommon for a Royal Oak – the very first Royal Oak Perpetual Calendar in titanium only arrived a year ago. Since then, there’s been another titanium version, a Japan-only edition with a “salmon” dial, making this U.S.-market edition the third to date. That’s relatively few, which makes this special, despite there being a lot of Royal Oak limited editions in general.

Retailing for at US$80,000, the new Perpetual Calendar is fairly priced, as is typical for complicated Royal Oaks, like the tourbillon or minute repeater. In fact, it costs the same as the standard version in steel, which also has a blue dial, making the latest a no-brainer – but that is pretty much moot, because obtaining one is a challenge in today’s hot market. 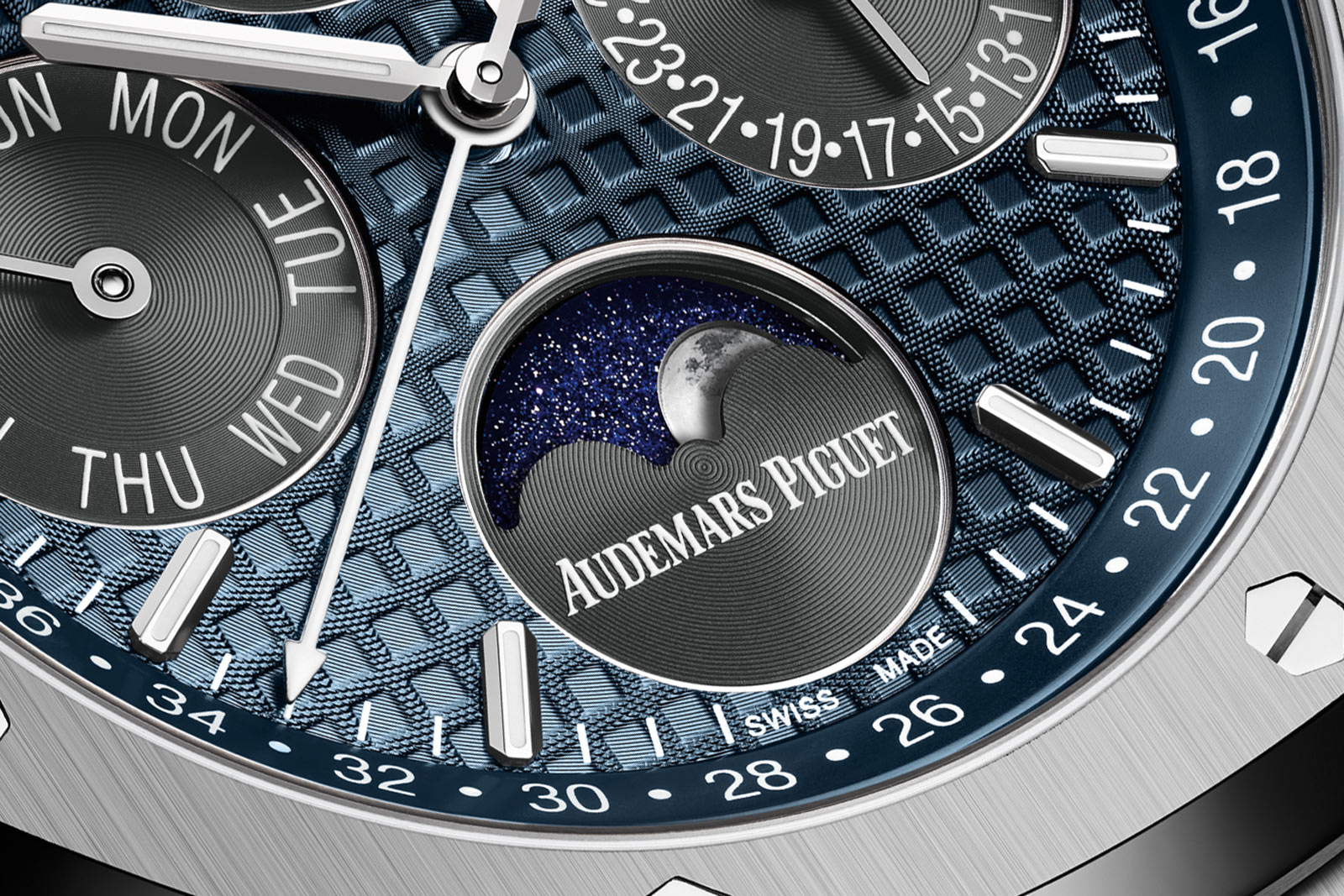 The moon phase display is photorealistic, with a cratered moon and tiny constellations in the stars

Perhaps the most important complication for AP, the perpetual calendar has been a specialty of the watchmaker since its early days. AP was the first to incorporate the leap-year indicator in a wristwatch, and then relied on the complication to help it survive the Quartz Crisis, during which its ultra-thin perpetual calendar of 1978 was a bestseller.

Fast forward to the present day and the Royal Oak Perpetual Calendar still retains the familiar layout of the ultra-thin perpetual calendar. It’s the classical look for a perpetual calendar, with quadruple sub-dials, each indicating one unit of time, save for the register at 12 o’clock, which doubles up by showing both the leap year and month. 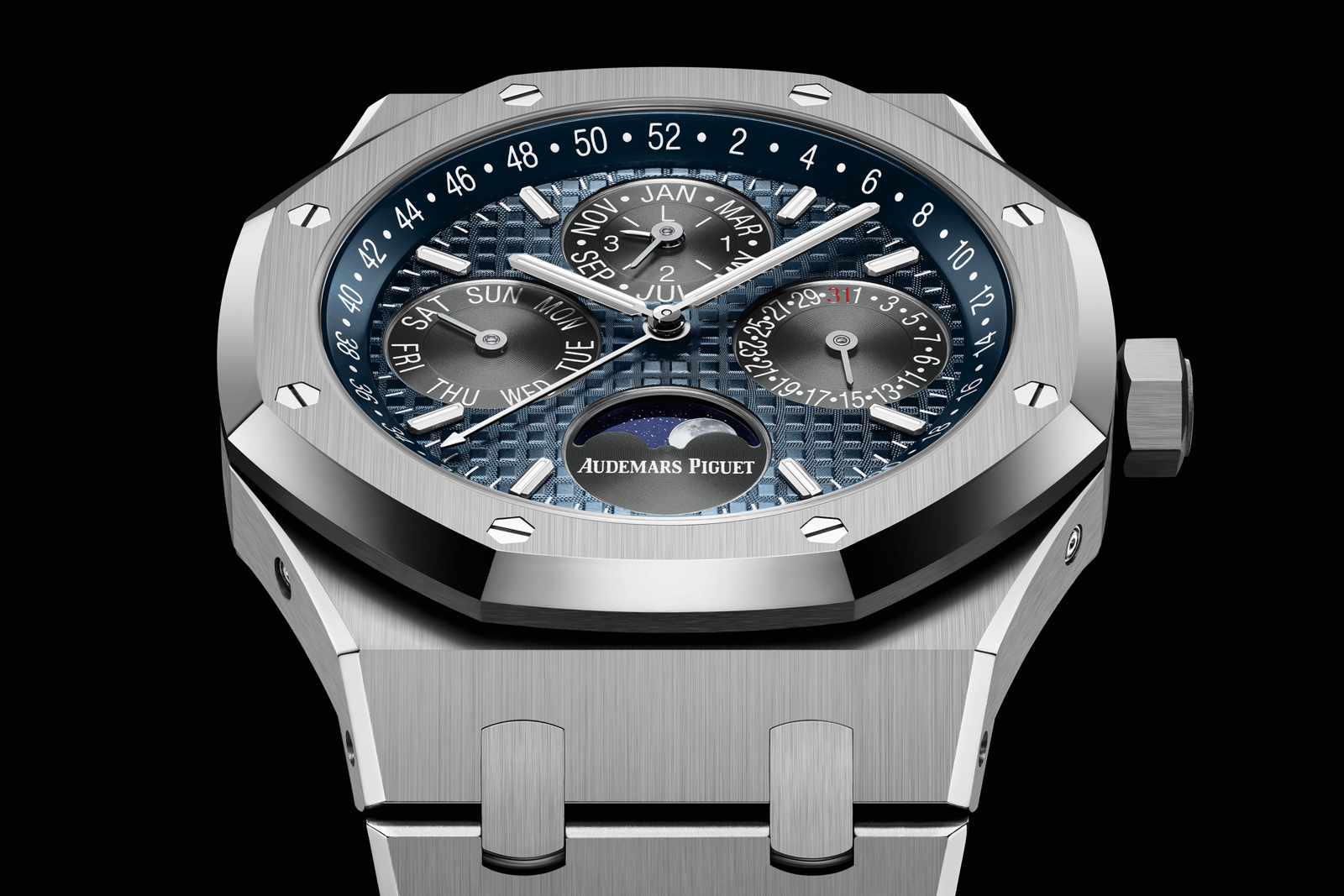 While the display with quadruple sub-dials is appealingly symmetrical and timeless, its mechanics are dated, at least from the perspective of practicality. Because the perpetual calendar module is lever-based, the calendar can’t be set in the hours around midnight. And it has to be set through the recessed correctors incorporated on the case sides, a process that requires a tiny stylus.

And the correctors are also a reason that the water resistance of the watch is minimal at just 20 m, which is even less than that of a Royal Oak Minute Repeater.

The old-school construction due to the historic cal. 2953 within. Derived from the JLC cal. 920 from the 1960s, the calibre is a fine, slim movement – but its refinement comes at the cost of a short, 40-hour power reserve. And the calendar mechanism is similarly derived from that found in the 1978 perpetual calendar wristwatch.

But given AP’s historical prowess in perpetual calendars, and its progressive roll out of latest-generation calibres across all models, it’s reasonable to anticipate an all-new perpetual calendar movement eventually. 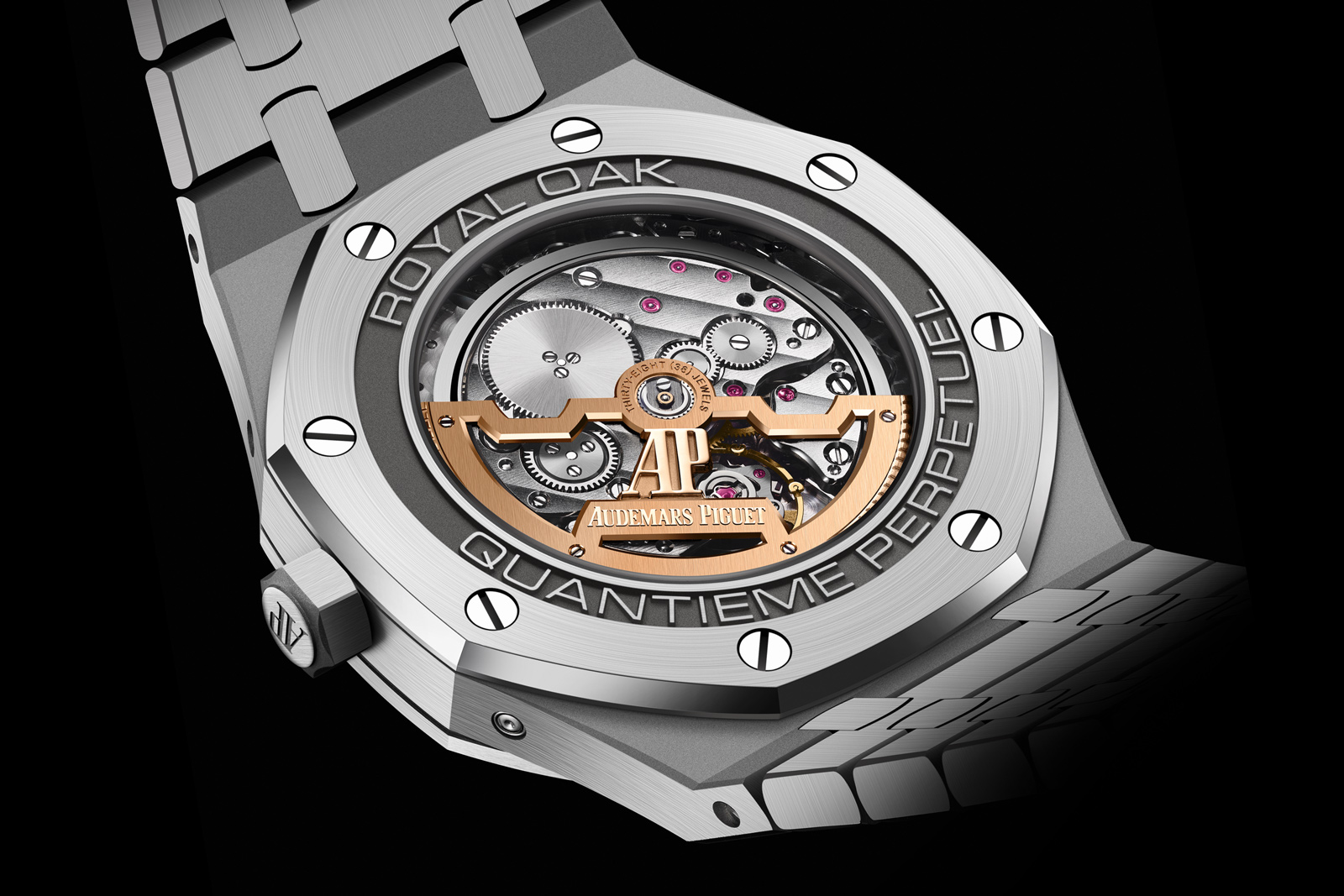 Limited Edition: No
Availability: Starting September in the U.S., and limited quantities in other countries from October
Price: US$80,000, or 115,500 Singapore dollars