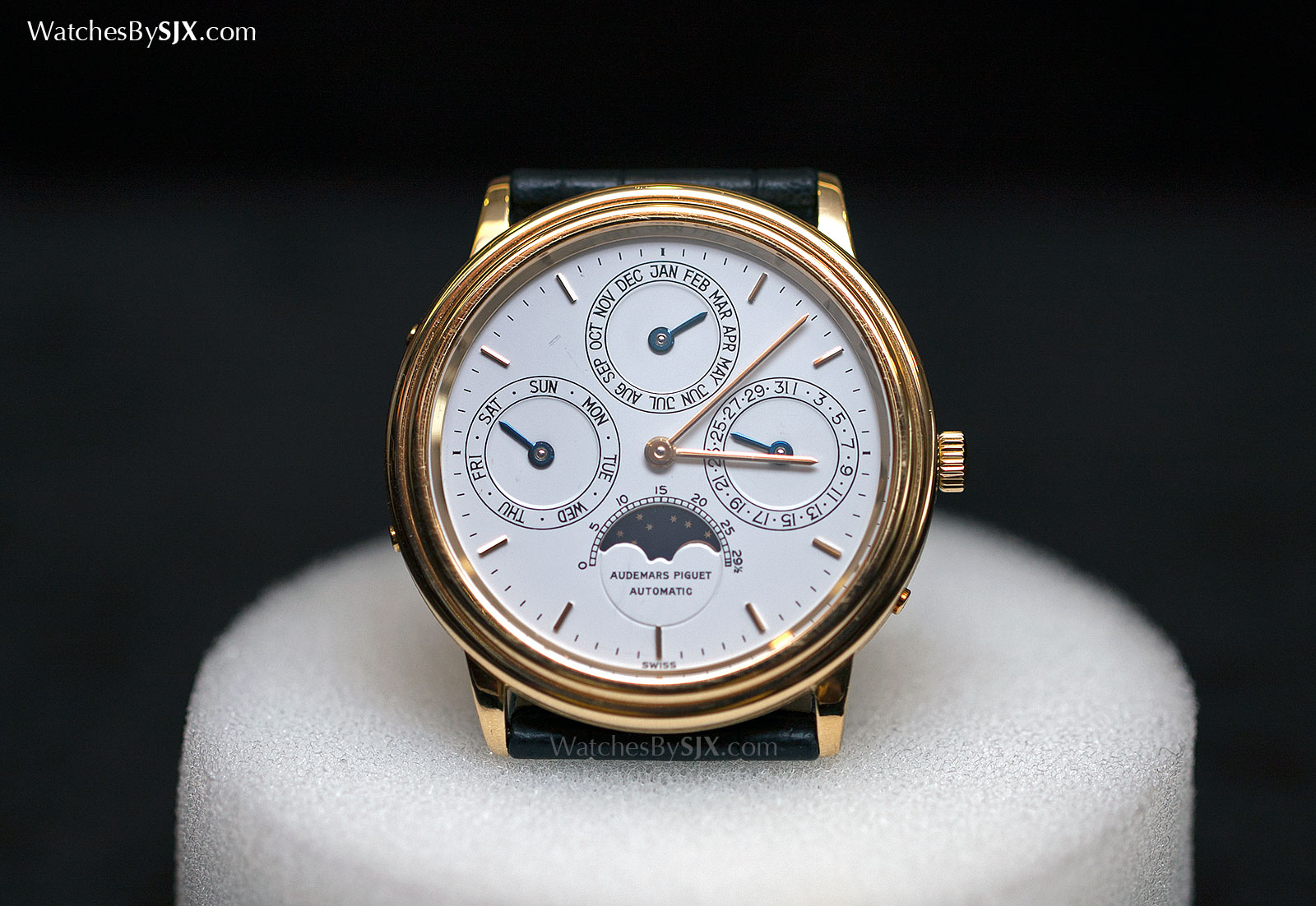 The 1923 pocket watch beside the Tradition perpetual calendar of today Platinum, cushion-shaped with a gorgeous Art Deco dial, the pocket watch provided inspiration for the modern day Tradition line of complicated watches. The watch indicates the full calendar, as well as the moon phase and leap year, displayed on a solid gold dial with striking italicised Breguet numerals that are also made of gold. Featuring a similarly styled dial is another treasure from the museum, the complete calendar equipped with the calibre 10GHSM. Produced from 1924 to 1937 (but sold from 1925 to 1954, revealing how slowly these moved back in the day), this was the first calendar wristwatch made by Audemars Piguet. Though not a perpetual calendar, it is still extremely rare, with only 108 having been made. Though this model had no reference number, being produced before Audemars Piguet labelled its models, it is known from photos numbered 180 and 180B in the Audemars Piguet archive. All watches of this series shared the same movement, a hand-wound movement with triple calendar functions plus a moon phase built on a movement blank made by LeCoultre. These masterpieces sold for SFr1515 in platinum, and SFr625 in gold, when they were new. While all the watches were equipped with the same movement, they had different dials and cases (though the cases were all approximately rectangular) this specific watch is perhaps the rarest of the entire series, being the only one known with applied numerals on the dial. It was made in 1928 and sold two years later to Bittmann & Co., a now defunct jeweller in St Moritz, the tony Swiss resort town. Intriguingly, the engraving on the reverse was modified many decades after the watch was originally sold. The original lettering on the back read “Paul H. Fassnacht New York 277 Park Ave”, meaning it was likely the property of a Mr Paul H. Fassnacht, a German immigrant who became the president of an engineering company with several patents to his name. The later modification to the engraving implies the watch was then gifted to Marlo and Klaus Mecke in 1961; Mr Mecke appears to have been an importer of chemicals. Around the same time, Patek Philippe made the first ever perpetual calendar wristwatch with a one-off creation in 1925, followed by the first serially produced perpetual calendar in 1941. Audemars Piguet only introduced its first perpetual calendar wristwatch in 1950, a model that would eventually be known as the ref. 5516 once Audemars Piguet began using model reference numbers. The ref. 5516 is important because five years later the model was improved, becoming the first perpetual calendar wristwatch with a leap year indicator, a feature that is standard on modern perpetual calendars. Patek Philippe took some 26 years to add the leap year indicator to its perpetuals. Only 12 of the ref. 5516 were made, with nine having a leap year function. To learn more about the ref. 5516, read our in-depth story published in August 2015. And then as all students of watch history known, the quartz crisis came along. Throughout the quartz crisis, Audemars Piguet was one of the few high-end watchmakers that continuing doing what it had been doing since the 19th century, albeit on a shoestring budget and declining sales. While it could pass for something from decades earlier, this extraordinary grand complication pocket watch dates from 1970, a year after Seiko introduced its first quartz watch, one that would eventually go on to kill the Swiss watch industry. While there were presumably no takers for such a complicated watch, Audemars Piguet made it anyway, several in fact. This features a minute repeater, split-seconds chronograph, perpetual calendar, powered by the calibre 17JSMCCRVQ movement (with all the letter suffixes indicating the functions). In 1978, the Swiss watch industry having been decimated, Audemars Piguet unveiled the watch that, in the words of museum curator Sebastian Vivas, saved the company. The extra-thin perpetual calendar had a movement just 3.95 mm high, a record at the time. It was an in-house perpetual calendar module, built on the Jaeger-LeCoultre calibre 920, the slim automatic movement best known for being the movement inside the original 1972 Royal Oak and first Patek Philippe Nautilus of 1976. With barely anyone else making any sort of traditional, complicated timepiece, Audemars Piguet found success with the extra-thin perpetual calendar, selling some 400 a year at the peak of its popularity. This specimen dates from 1981 and is the archetype of the model, with a yellow gold case and white lacquered dial. Fancier models were made, including versions with skeletonised movements, others in platinum and later on, the same movement inside the Royal Oak case. Those dismal days are long gone, but Audemars Piguet still uses the same perpetual calendar movement in its timepieces, proving that good things last for a long time.

Many thanks to Sebastian Vivas, curator of the Audemars Piguet Museum, for his assistance with this article.