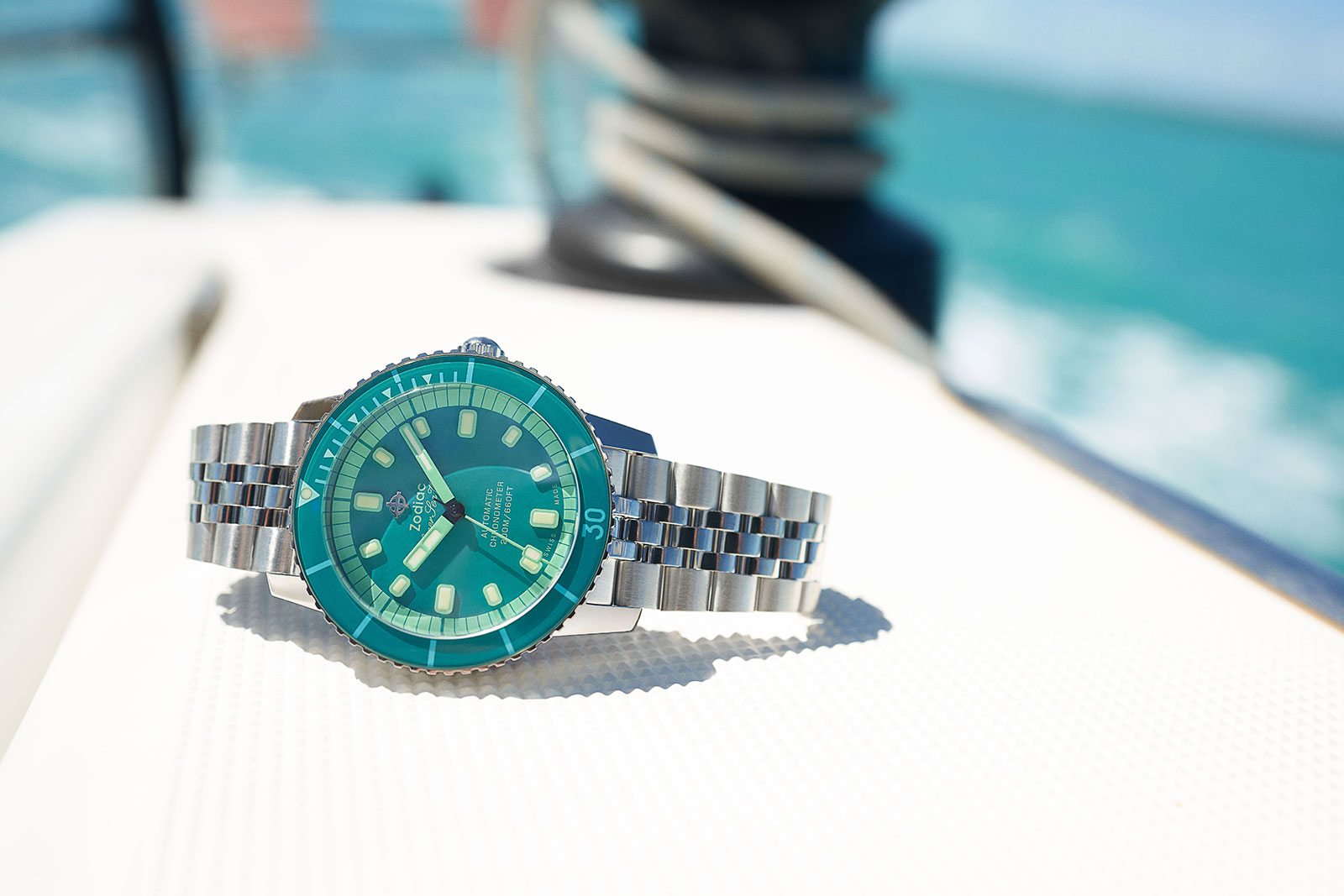 Zodiac has in recent years revived most of its best-known sports watches, namely the Sea Wolf divers produced from the 1950s to the 1970s. Appealing because they are reassuringly retro and eminently affordable, the Sea Wolf remakes are mostly offered in the same colours as the vintage originals were.

But now Zodiac has just debuted the Super Sea Wolf Aquamarine Dream, a special edition conceived in collaboration with Ariel Adams, the founder of American watch magazine aBlogtoWatch. Inspired by the marine colours of Nassau during a 2019 trip to the Bahamas, Ariel’s creation is rendered in several shades of green-blue, right down to the hue of Super-Luminova and the “tropic” style rubber strap. 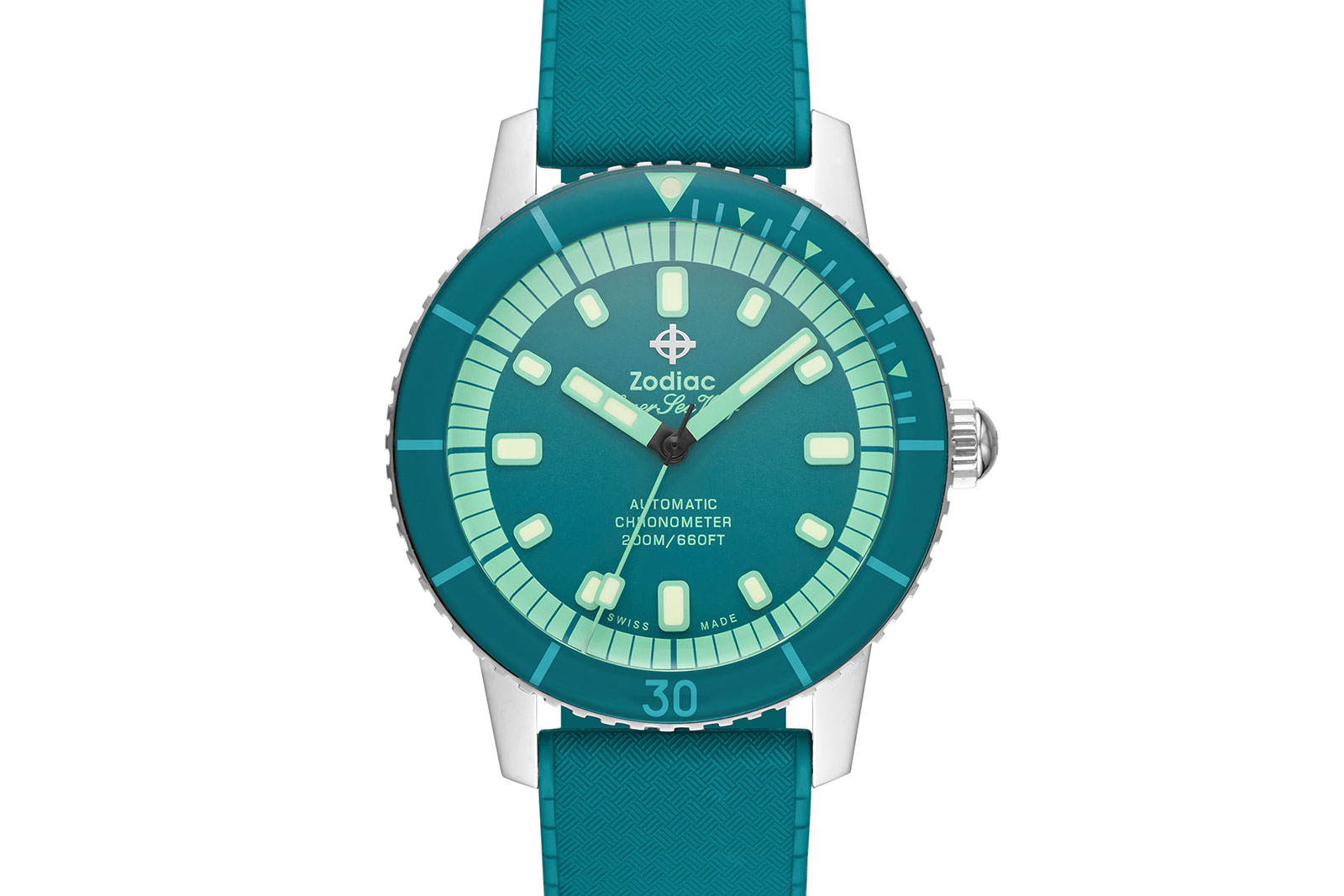 Ariel founded aBlogtoWatch (ABTW) in 2007, making him a watch-blog pioneer. I’ve known Ariel for about a decade or so and respect him for his frank, accessible approaching to covering watches. Granted, I don’t always agree with his opinion, but certainly appreciate the unpretentious style of ABTW, especially Ariel’s editorials and podcasts.

Priced at just under US$1,500, the Aquamarine Dream combines cheerful and vintage-inspired looks along with an accessible price tag – an honest product I would expect from Ariel. It reminds me of another recent remake that I like, the Longines BigEye in titanium, which also preserves the design of the vintage original but adds a healthy dose of modern colour and texture.

Notably, it is not a limited edition, and although the initial batch is sold out, it can be reserved in advance as additional production runs are in the works. 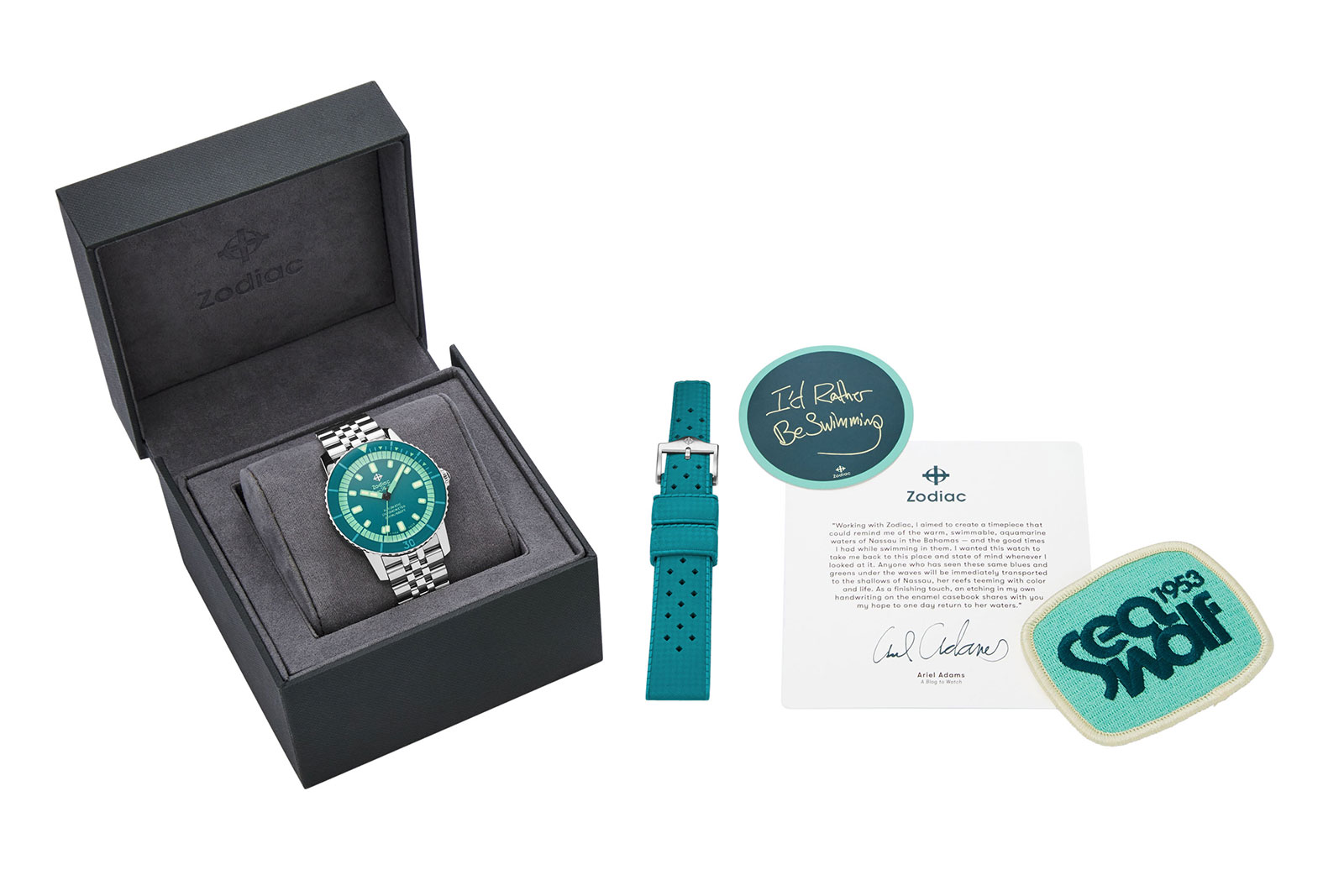 The Aquamarine Dream is a variant of the Super Sea Wolf, a 200 m dive watch modelled on the 1960s original of the same name.

Featuring the same shape and profile as the vintage original – but scaled up – the steel case is 40 mm, compared to the 36 mm or so for the original, but still moderate in size by modern standards. 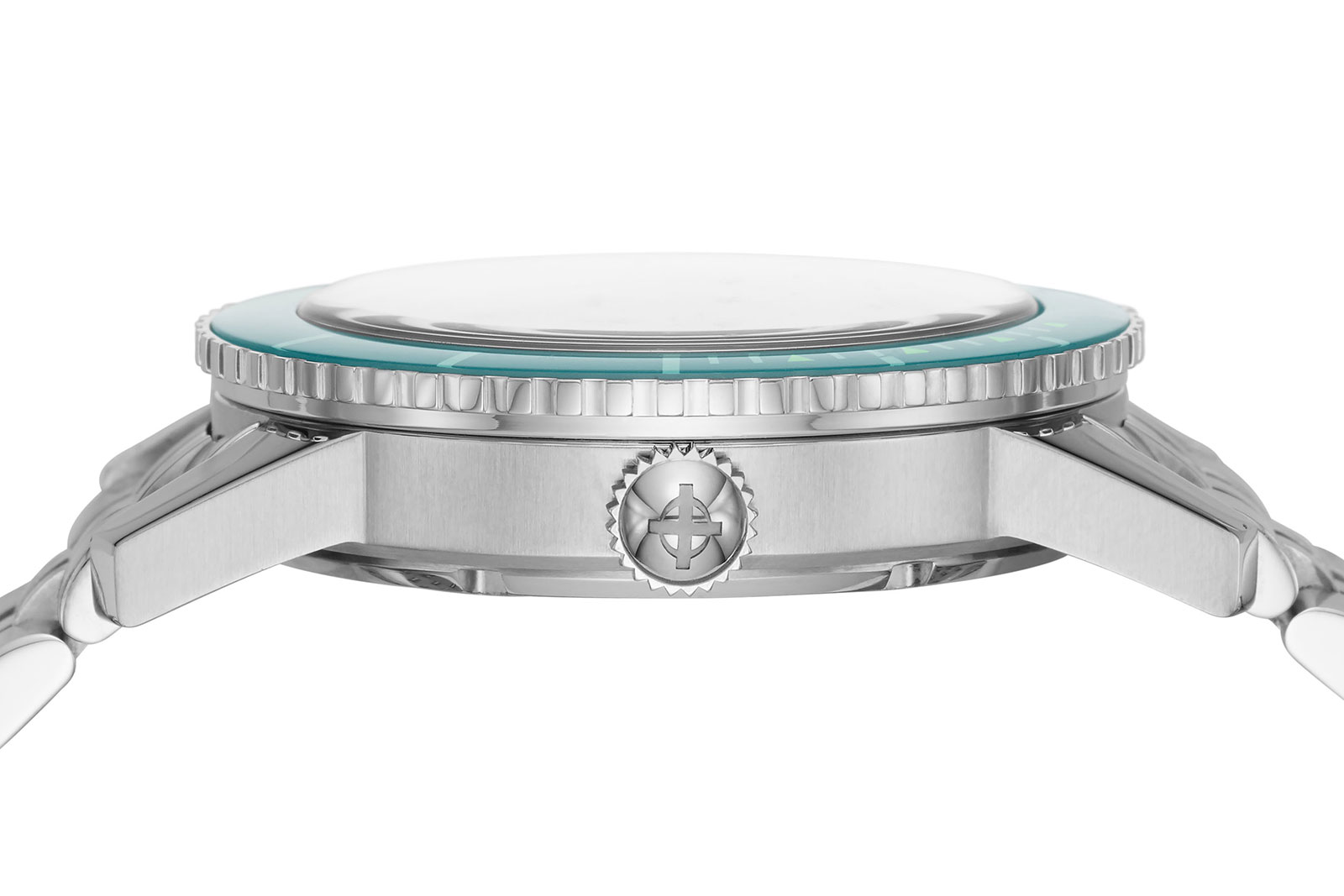 While the case has a sapphire crystal, the bezel is fitted with a hardened mineral glass insert that mimics the Bakelite bezel found on the original. A scratch-resistant sapphire insert would have been a welcome upgrade, but mineral glass, while more prone to scratches, is stronger and less prone to cracking.

And the screw-down case back features a lacquer medallion reproducing Ariel’s handwriting: “I’d Rather Be Swimming”. 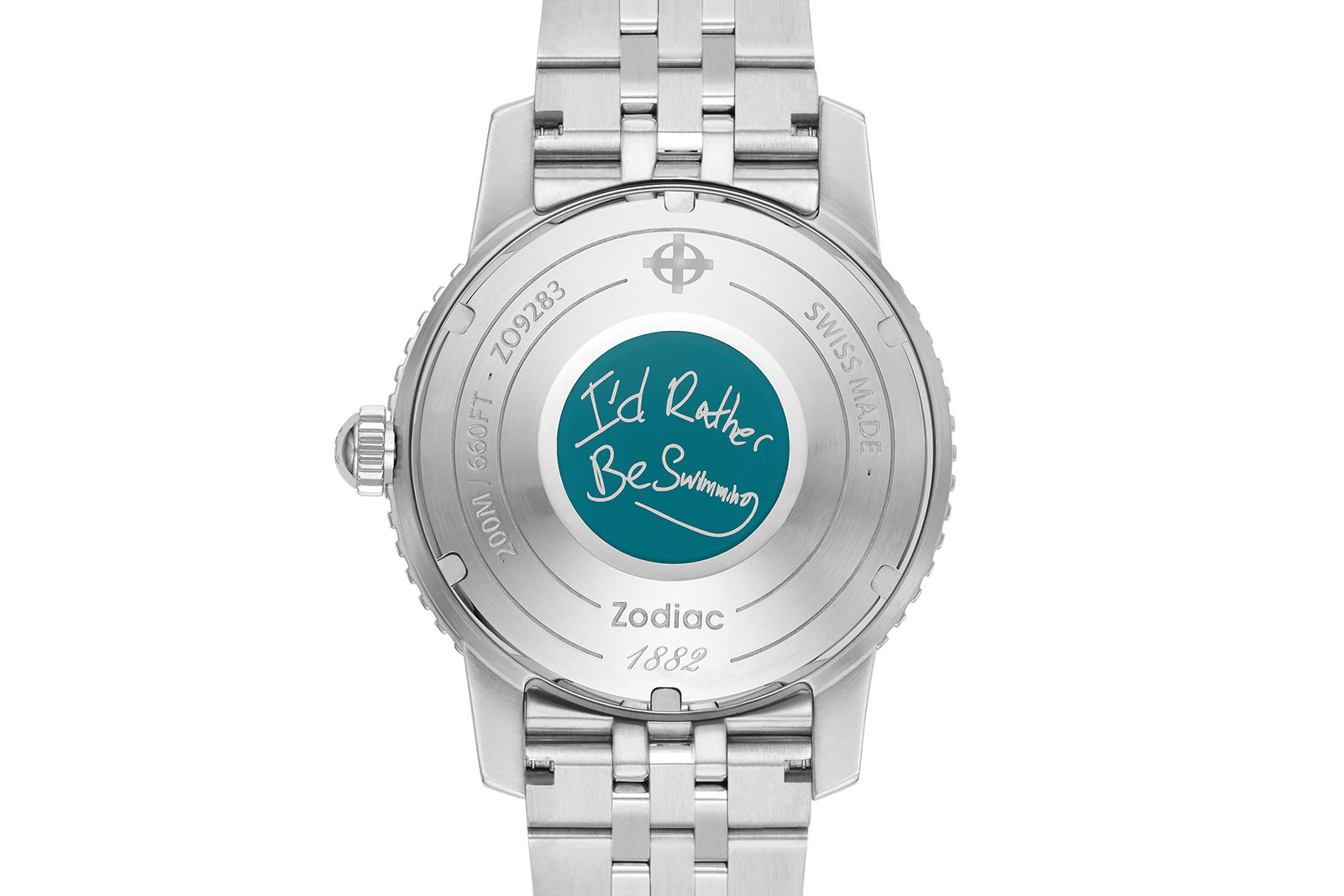 Underneath the solid back is a proprietary movement of sorts, the STP3-13, a dressed-up clone of the ETA 2824 produced by Swiss Technology Production (STP), a sister company of Zodiac.

Zodiac is owned by Fossil, the American watch conglomerate that owns a variety of brands, including Skagen and Michele, while manufacturing others under license, including Emporio Armani, Michael Kors and Kate Spade. 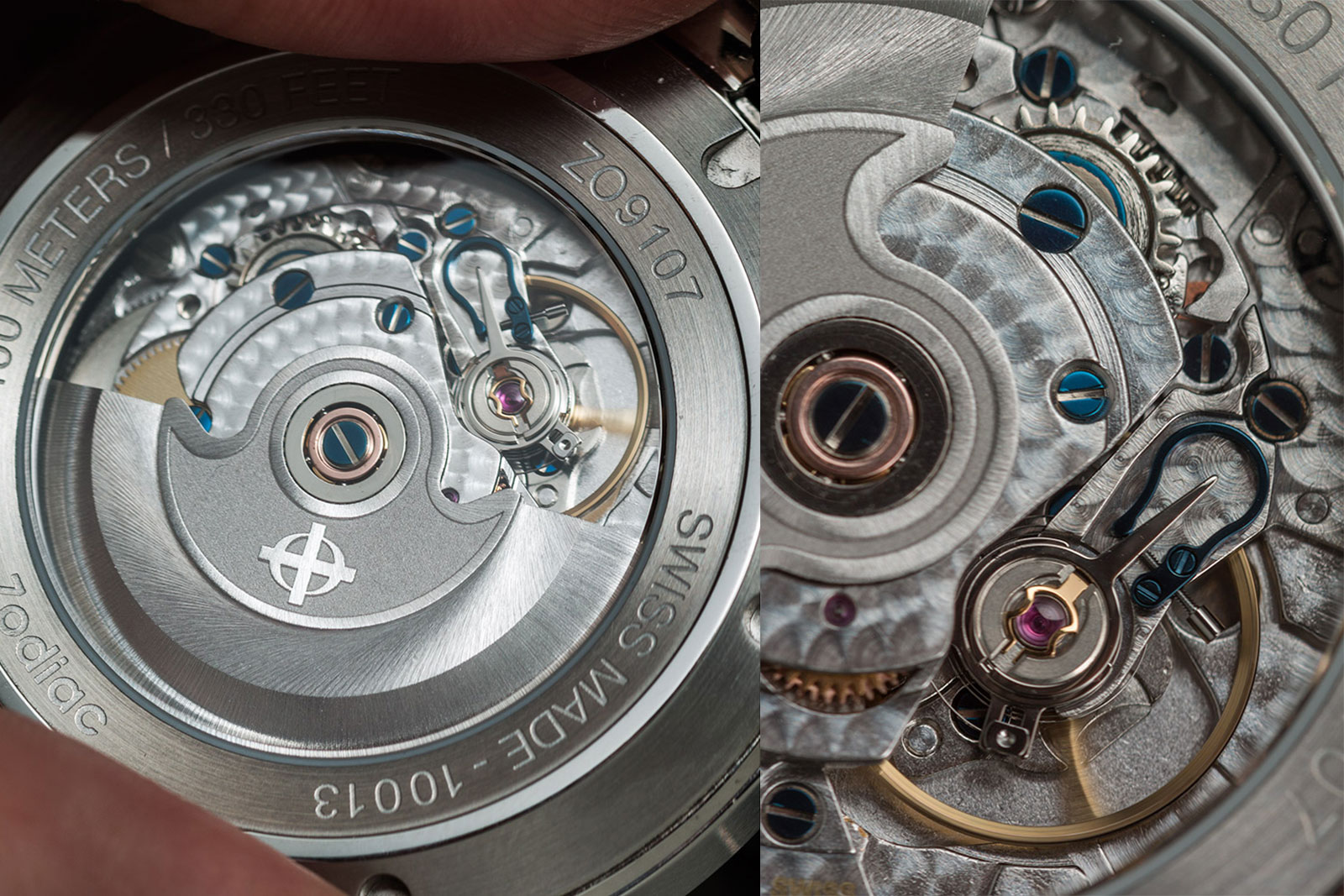 The STP3-13 as seen in another Zodiac model, recognisable as an ETA 2824 but upgraded with a swan’s neck regulator index and screws in blued steel. Image – aBlogtoWatch

Fossil acquired STP in 2012 to ensure a supply of Swiss-made movements for its upper end brands. Now STP produces movements for several Fossil brands along with several smaller marques and “micro brands” like Sartory Billard.

Located in the canton of Ticino that borders Italy – where costs are lower than in traditional watchmaking regions – STP makes a cost-efficient family of movements that are all based on the architecture of the ETA 2824. aBlogtoWatch detailed a visit to the STP facility in 2016.

The Aquamarine Dream is powered by one of these calibres, the STP3-13. Though hidden under a solid back, the movement resembles an ETA 2824, and has identical specs, including a power reserve of 40-ish hours.

Limited edition: No, but only available via preorder for now
Availability: Direct from Zodiac online or authorised retailers
Price: US$1,495