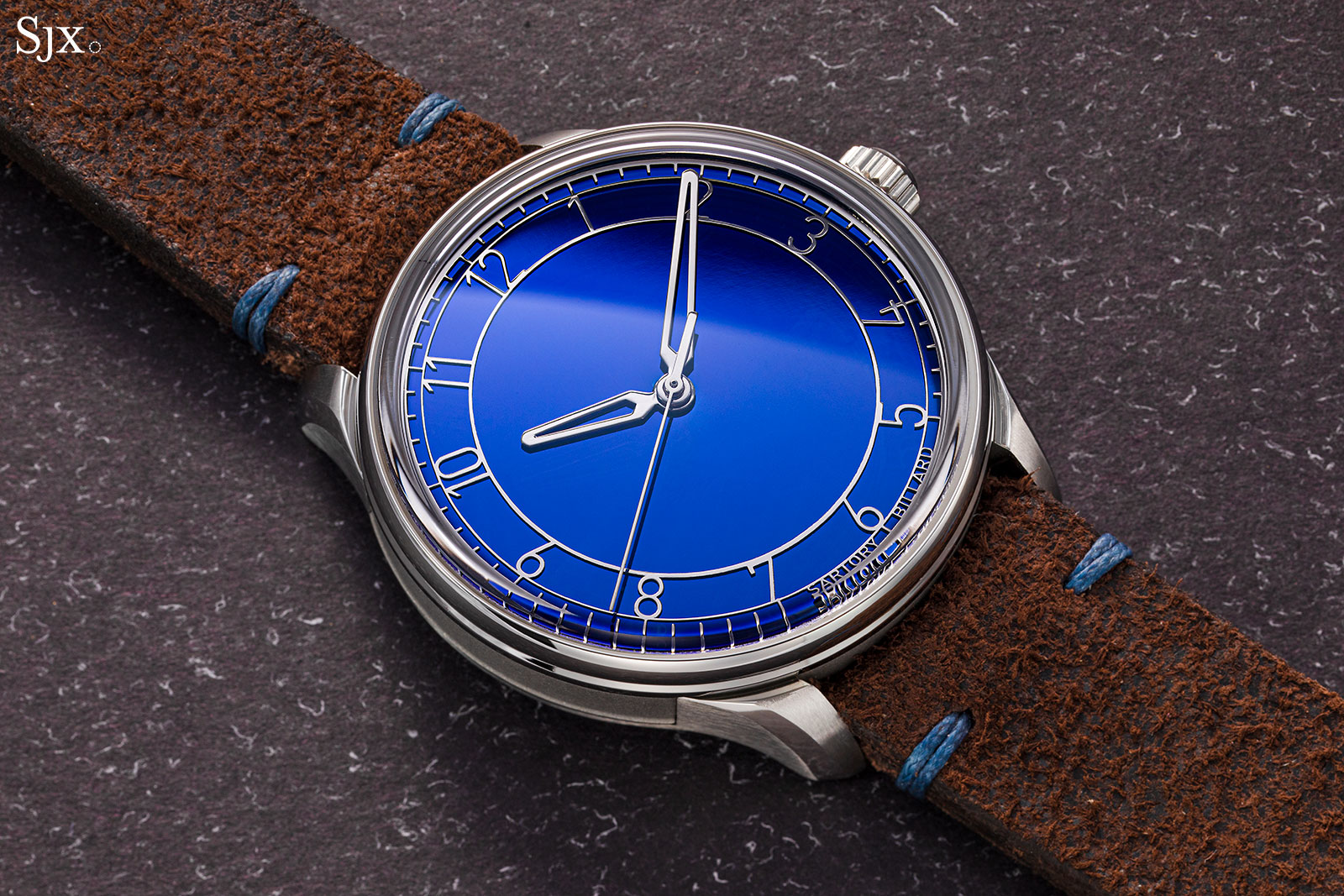 An industrial designer who once worked for French telecoms giant Alcatel, Armand Billard designed phones, petrol pumps, and diving goggles before starting Sartory Billard in 2015. He soon had a line-up of three different models, but nothing that stood out. Last year Mr Billard finally conceived the watch that would make the brand, the Sartory Billard SB04.

The SB04 is built around a familiar but potent formula: devoting most of the effort and investment into into the external parts of the watch. So the SB04 has an elaborate dial and well-finished case containing a cost-effective movement, resulting in a good-looking watch that’s affordable and highly customisable. 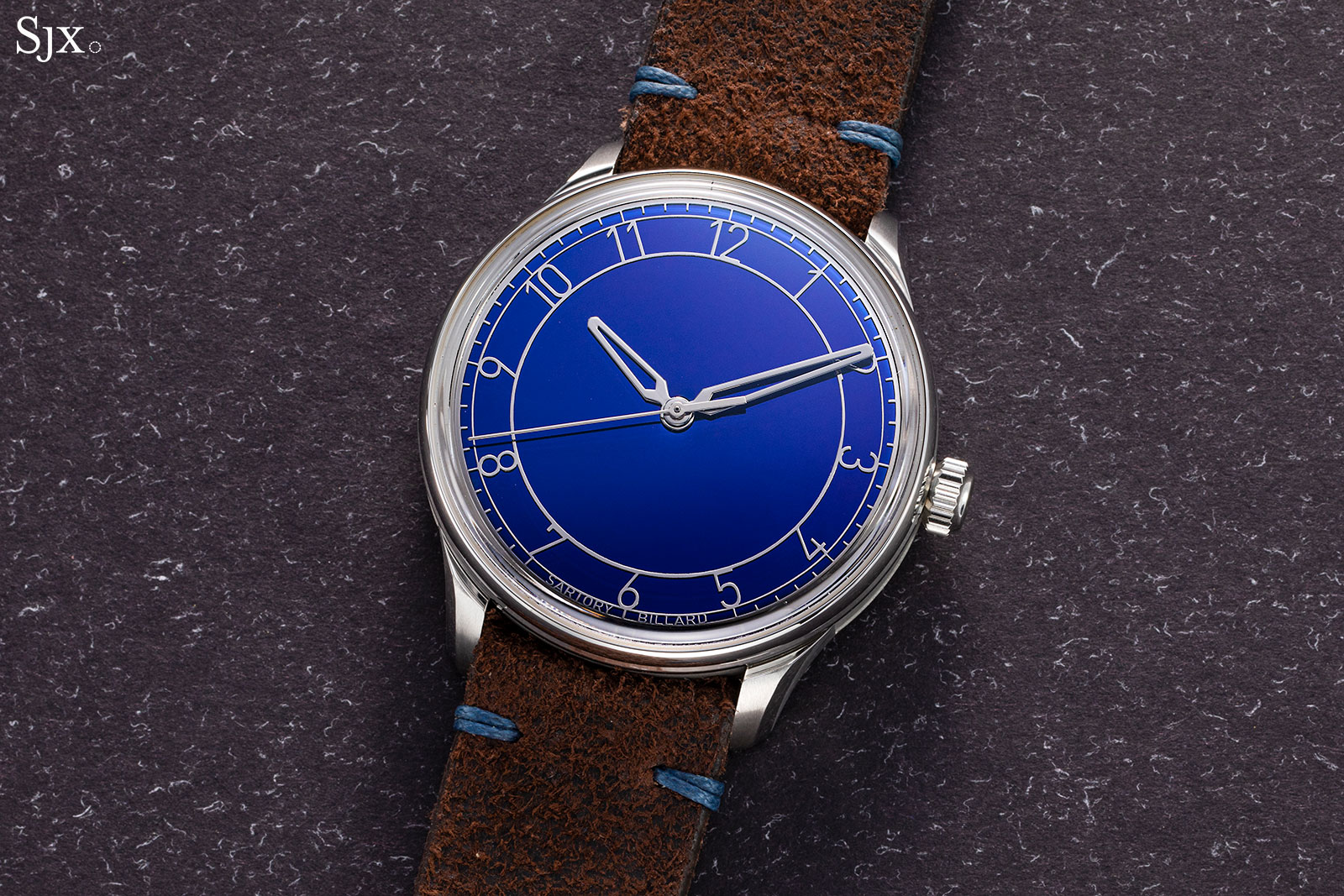 The SB04 with a blued titanium dial 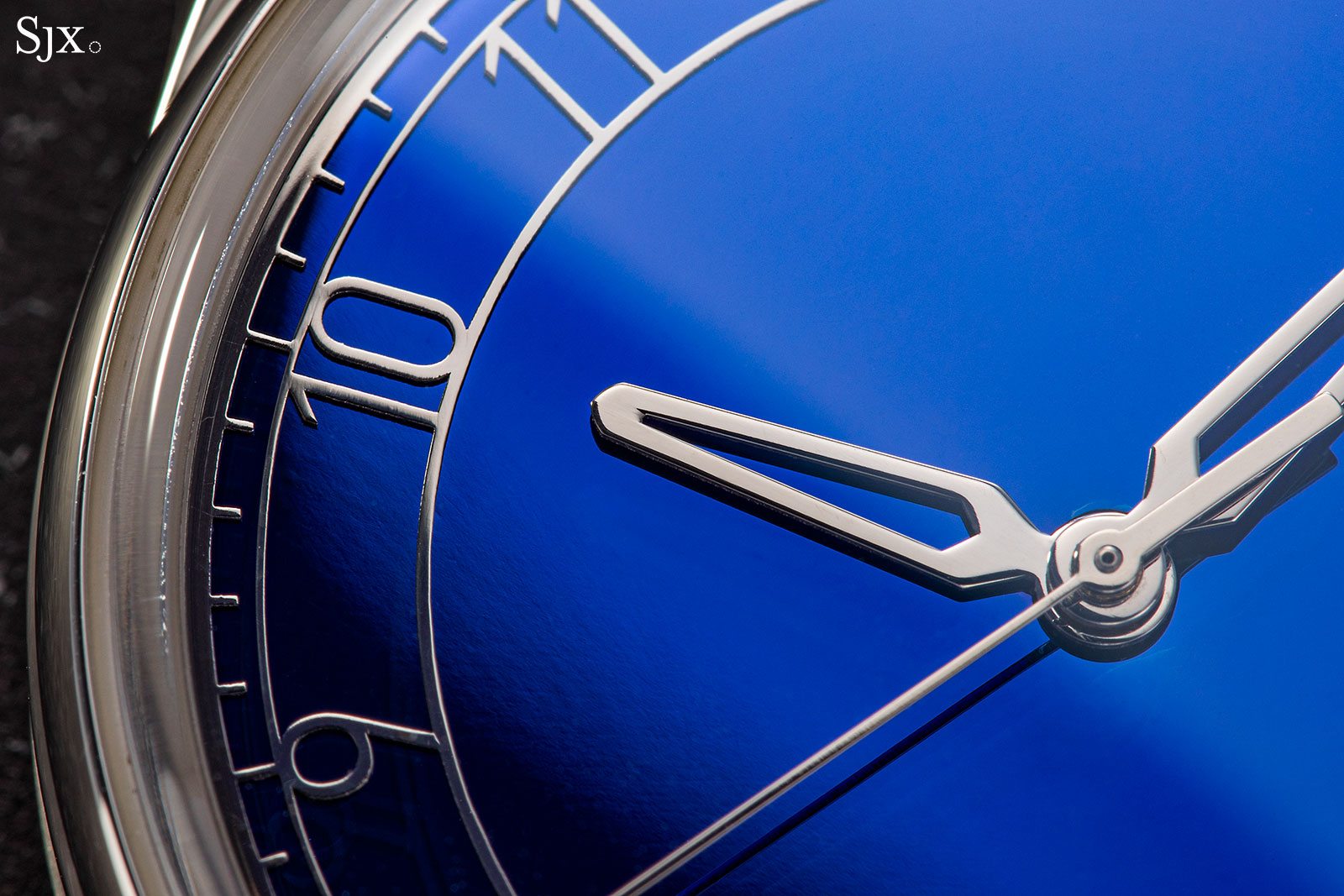 Unusually for a watch in this price range – a bit under US$3,000 – the SB04 incorporates several hand-made parts, most notably the hands, chapter ring for the hours, and the decorative ring around the rotor. As a result, the watch punches above its price class in terms of looks, particularly in the details of the dial and case.

Though moderately sized at 40 mm in diameter – its 11 mm height is a bit thick however – the SB04 has good presence on the wrist, mainly because of its design features like the wide and richly-coloured dial, narrow bezel, and domed crystal. And because of its short, curved lugs and lightness, the SB04 wears easily and well.

While the case is available in steel or titanium (with other materials to come), the dial is the primary aspect of the watch that can be customised. The dial material, finish, chapter ring, as well as hands can be tweaked for each customer. The SB04 is available with a variety of dials, ranging from Damascus patterned steel to carbon fibre composite, but the signature finish is highly-polished, heat-treated titanium that’s available in a variety of colours including burgundy and purple. The most popular colour, however, is a familiar one: a metallic blue created by heating titanium to create an oxide layer on its surface. 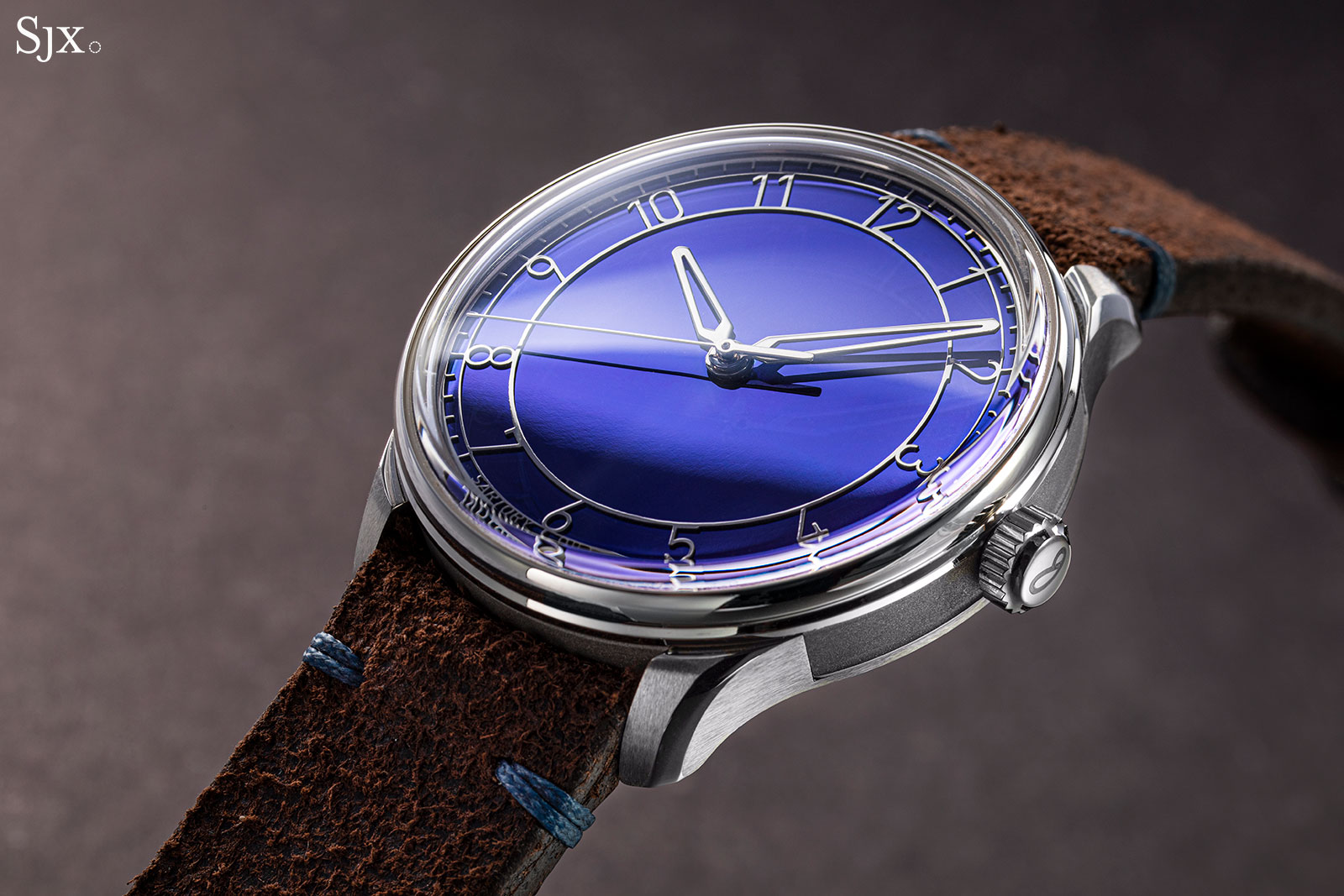 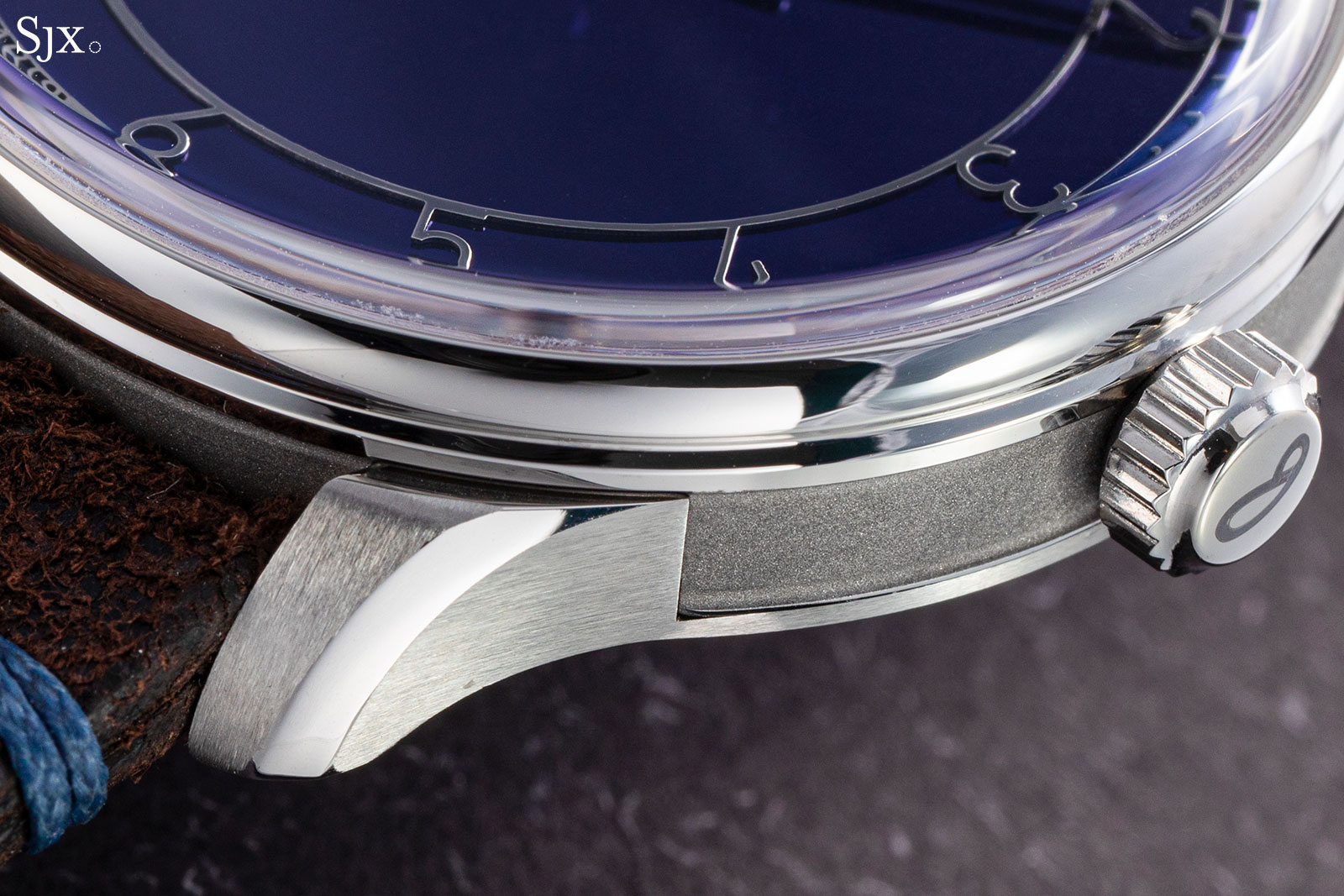 Made by a supplier in Switzerland, the titanium dial is an incredible, brilliant blue that is heavily reminiscent of De Bethune’s trademark heat-blued titanium that it uses for both dials and cases. Greubel Forsey also offers something similar, but achieved with a blue-coated, solid-gold disc instead of heated titanium.

The similarity to what other brands are doing is a good thing, because Sartory Billard is the only brand offering such a dial in an affordable watch, especially since the dial in the SB04 is heat treated to create the blue finish, a more tedious process than coating or painting.

It’s worth pointing out that while the heat-treated dials are now being made by a specialist, Mr Billard is working on producing them himself. Having bought a small oven and other tools, Mr Billard is refining the technique and hopes to be able to perfect the heating method within a few months. At the same time, Mr Billard is also experimenting with another process that relies on a chemical bath and electric current to create the same blue oxide layer. 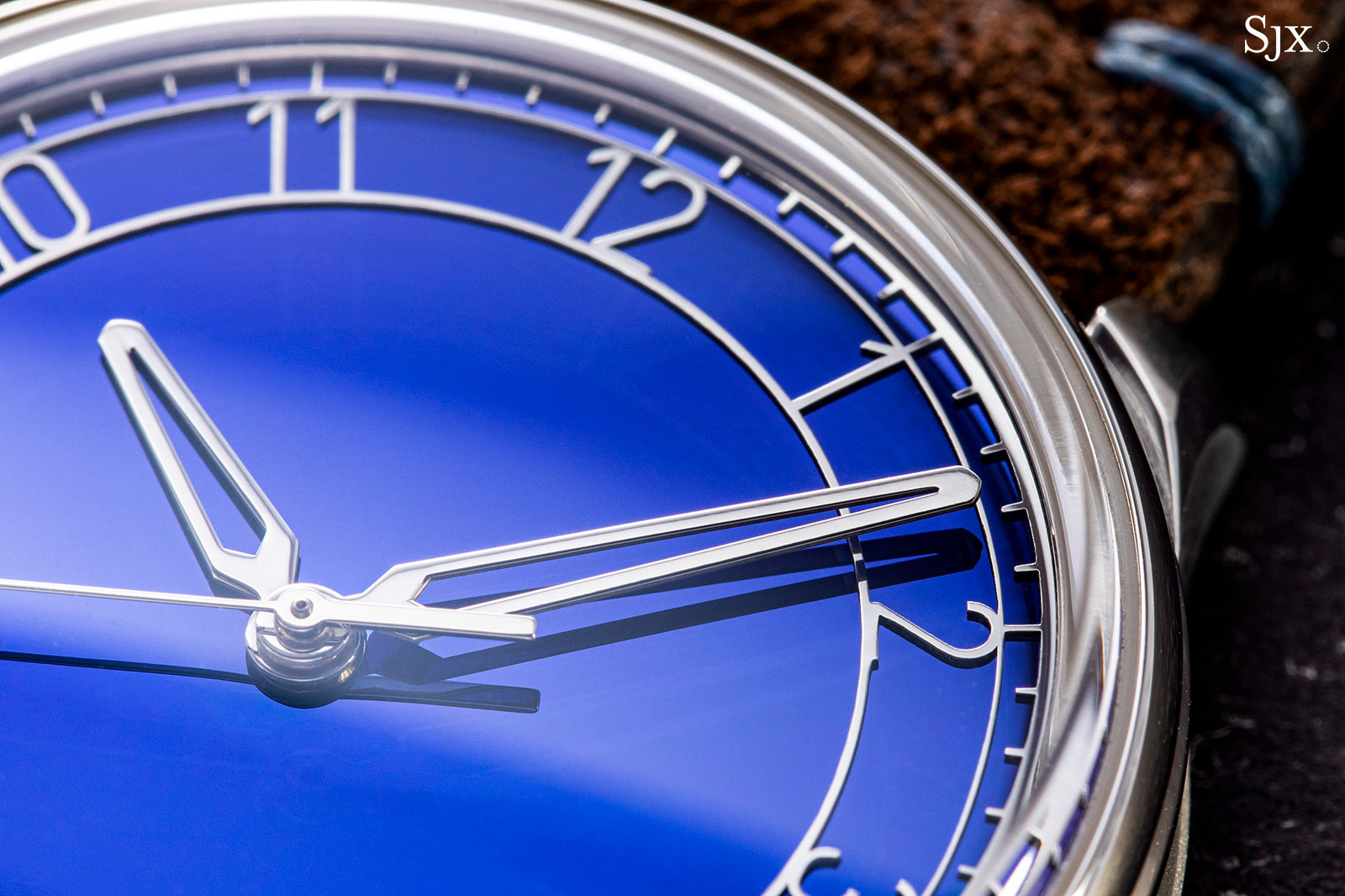 The dial is wide and simple but avoids looking flat thanks to the applied chapter ring for the hours. Made by Mr Billard himself, the chapter ring is first cut with laser from a thin sheet of steel.

More importantly, the chapter ring is then refined manually, with the deburring, polishing, and brushing all done by hand. The hands are made with the same process – laser cutting followed by hand finishing. It’s because the chapter ring and hands are hand made that Armand is able to customise them extensively without increasing the price. 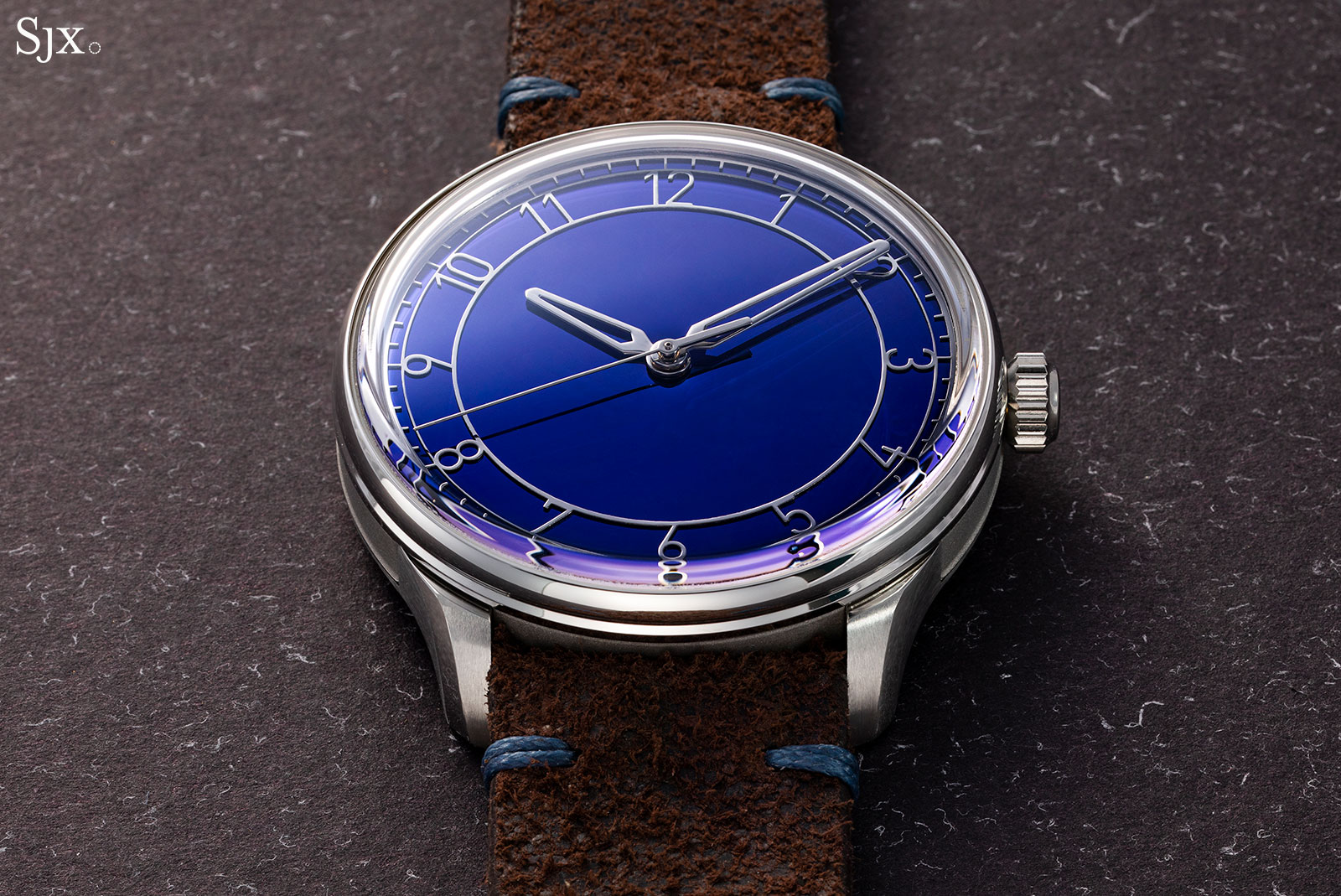 The chapter ring sits a hair’s width above the dial, casting a narrow shadow on the dial surface, which gives it more depth Both the chapter ring and hands represent an impressive amount of hand finishing in a relatively inexpensive watch, though the manual finishing inevitably means slightly inconsistencies that are visible at high magnification.

But these inconsistencies, like the uneven finish on the chapter ring, are part of the hand-finished appealing, which is uncommon in this price segment. Most similarly priced watches, in contrast, rely on elementary but consistent parts produced by specialists. Something else visible at high magnification – but invisible at arm’s length – is a slight “orange peel” texture on the mirror-polished dial surface.

Almost always found on highly-polished titanium (and sometimes platinum), the “orange peel” surface is common even on extremely expensive watches, with only a tiny number of brands – notably Seiko and Citizen – having perfected the art of polishing titanium to a perfect micro finish. As a result, it’s not so much a flaw as it is a fact of life. Pictured here in steel, but also available in titanium, the SB04 case is produced in Switzerland. It’s construed in an unconventional manner, being a two-part case held together by four screws.

The bezel and case middle are a single piece and form the upper half of the case, with the lugs and case back being the other half. The upper half sits in the lower half, and four screws on the back join the two parts together. 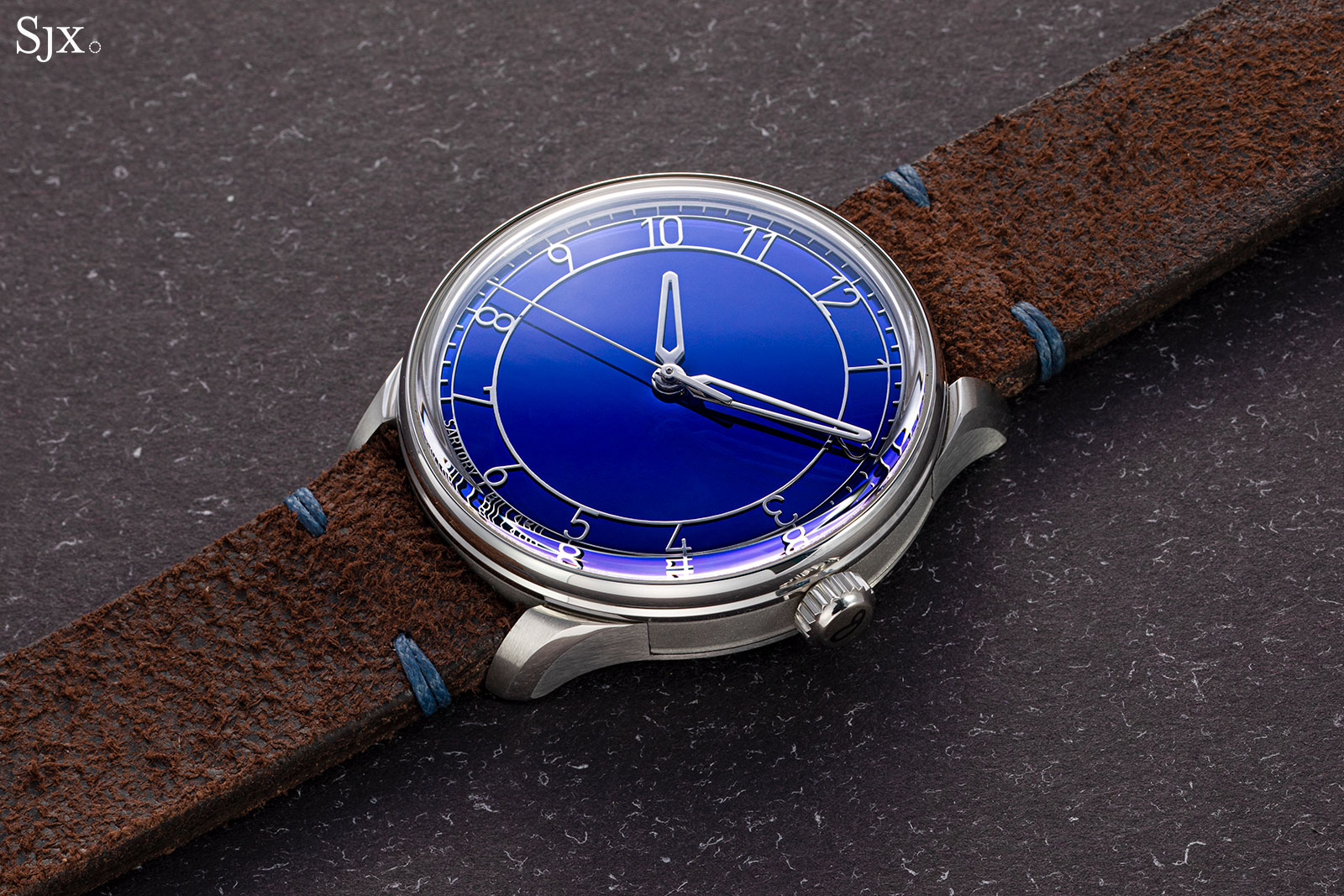 The advantage of this construction is the increased complexity of finishing, since the separate pieces can be finished differently before being put together, allowing for lots of contrasting surfaces.

As a result, the level of finishing that exceeds most comparably-priced watches. The bezel, for instance, is mirror polished while the case band is frosted. At the same time, the lugs and back are brushed, which creates a pleasing contrast of finishes, especially on the case profile.

Because the lugs are one piece with the case back, finishing them is easier than if they were joined to the case middle as is convention. So the lugs sport a sharply executed finish with brushed surfaces on the top and side separated by a wide, polished bevel with neatly-defined edges. But the construction also has its downside – the visible seams between the lugs and case middle, and to a lesser degree, the joint between the case middle and back. That could be solved with reducing the tolerances for the case parts, but such a solution would likely be impractical for a watch that costs this much. Fine but not flat

The case is a good size that’s large enough for modern taste without being too big. But it is pretty thick at 11 mm. In comparison, most sports watches, like the Rolex Submariner for instance, are only 12-13 mm high, while elegant chronographs like the Patek Philippe ref. 5170G are a bit under 11 mm.

And the construction of the case also makes the SB04 look thicker than it actually is, in part due to the high bezel and domed crystal. The watch would be a lot more appealing in terms of proportions if the case were only a little bit thinner, say just below 10 mm. But for now, that is not possible given the movement inside. The movement is a low-cost but reliable workhorse, albeit one that has been dressed up more than usual. It’s the STP3-13 produced by Swiss Technology Production (STP), a Swiss movement maker owned by Fossil Group, the American watch conglomerate that owns brands like Fossil and Zodiac while also making fashion-brand watches under license, including Armani and DKNY.

The STP3-13 is essentially a slightly improved clone of the ETA 2824, with the key improvement being a slightly longer power reserve (44 hours versus 38 hours) as well as a swan’s neck regulator index (which is arguably an aesthetic upgrade rather than truly functional addition). Here the movement has been finished extensively, with Geneve stripes on the rotor, perlage on the bridges, as well as the several screws and the swan’s neck regulator index in blued steel. The decoration is doubtlessly done by machine, but it is visually attractive, and definitely a step up from most watches in the same price range.

Most notable is the deeply fluted ring attached to the rotor, which catches the light as the rotor spins. Even though it is only decorative, the ring is a major visual upgrade, giving the movement a distinctly different feel from the standard 2824 clone, especially when combined with the swan’s neck regulator. The watch pictured is a prototype, so the movement isn’t perfectly clean By all account STP’s movements perform well when they are regulated properly, and are as reliable as the equivalent ETA movement. The only downside of the STP3-13 (and any other ETA 2824 substitute) is its height, hence the fairly thick case.

Priced a bit below US$3,000, the SB04 is strong value for money. While it costs more than the average “micro-brand” wristwatch that’s often below US$1,000, the SB04 offers a lot more in terms of dial and case quality.

More importantly, the effort put into building and finishing both the dial and case are visible, which translate into a tangible, visual appeal. And a thinner, manual-wind version would be perfect.

Availability: Made to order, with customisation options offered
Price: €2,700 excluding taxes (equivalent to US$2,900)