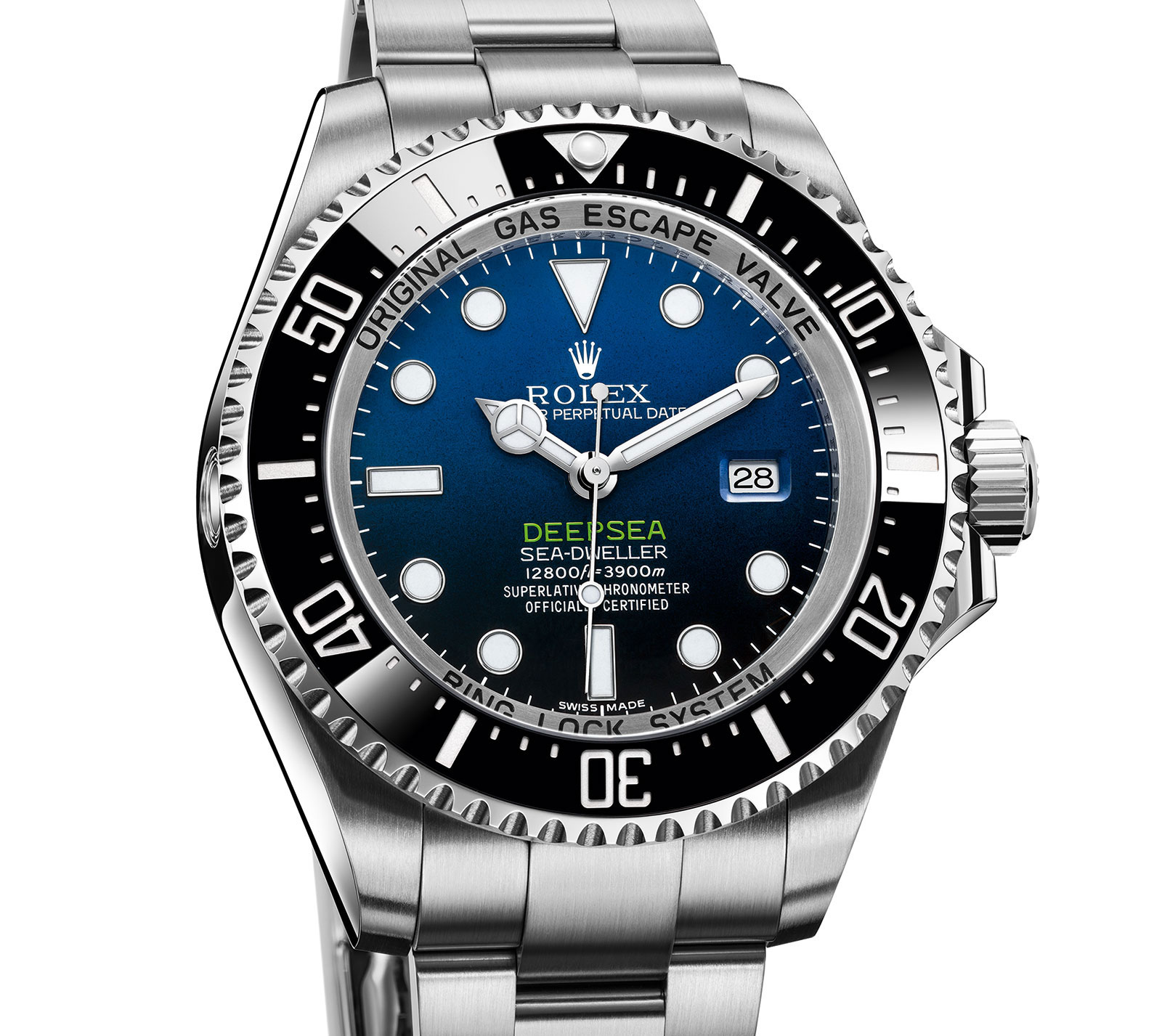 Historically Rolex maintained a Henry Ford-like philosophy of “any colour so long as it’s black” for its sports watches, leaving collectors to pursue watches with discoloured black dials. That has changed in recent years – witness the Milgauss Z Blue with an electric blue dial unveiled at Baselworld 2014. The Technicolor strategy continues with the new Rolex Deepsea D-Blue (ref. 116660-0003), featuring a dial in a graduated shade of blue to black. The D-Blue is meant to mark the watchmaker’s partnership with James Cameron and the Deepsea Challenge expedition. Two years ago Cameron, the film director of Titanic and Avatar fame, reached the deepest point on the Earth’s surface. His solo expedition inside the Deepsea Challenger submersible r eached 10,908 metres (35,787 feet), a world record and something not attempted since 1960. During the dive Cameron had a Rolex Deepsea on his wrist, and mounted on the outside of the Submersible were three experimental Rolex Deepsea Challenge wristwatches, enormous 51 mm watches rated to 12,000 m. Despite the tremendous anticipation after Rolex unveiled a teaser for the new Deepsea, its latest dive watch merely boasts a new dial colour – the rest of the watch is the same as before. The new D-Blue dial of the new Deepsea is meant to evoke the depths of the ocean, going from a deep blue at the top to pure black at the base of the dial. And the “Deepsea” lettering is in green, the same colour as the Deepsea Challenger submersible under water. Like the original Deepsea wristwatch, in the darkness of the depths, the dial glows blue thanks to the Chromalight Luminova markings. Aside from the dial colour, the Deepsea D-Blue is exactly the same as its black-on-black brother. With a helium escape valve at nine o’clock, the 44 m steel case has a Ringlock construction which ensures water tightness to 3900 m, or 12,800 ft. The bezel insert is black ceramic with platinum coated numerals and markings. And the bracelet is also exactly the same, equipped with both the Glidelock ratcheting adjustment and Fliplock extension. Introducing The Rolex Yacht-Master Ref. 116622 In Steel & Platinum With A Blue Dial