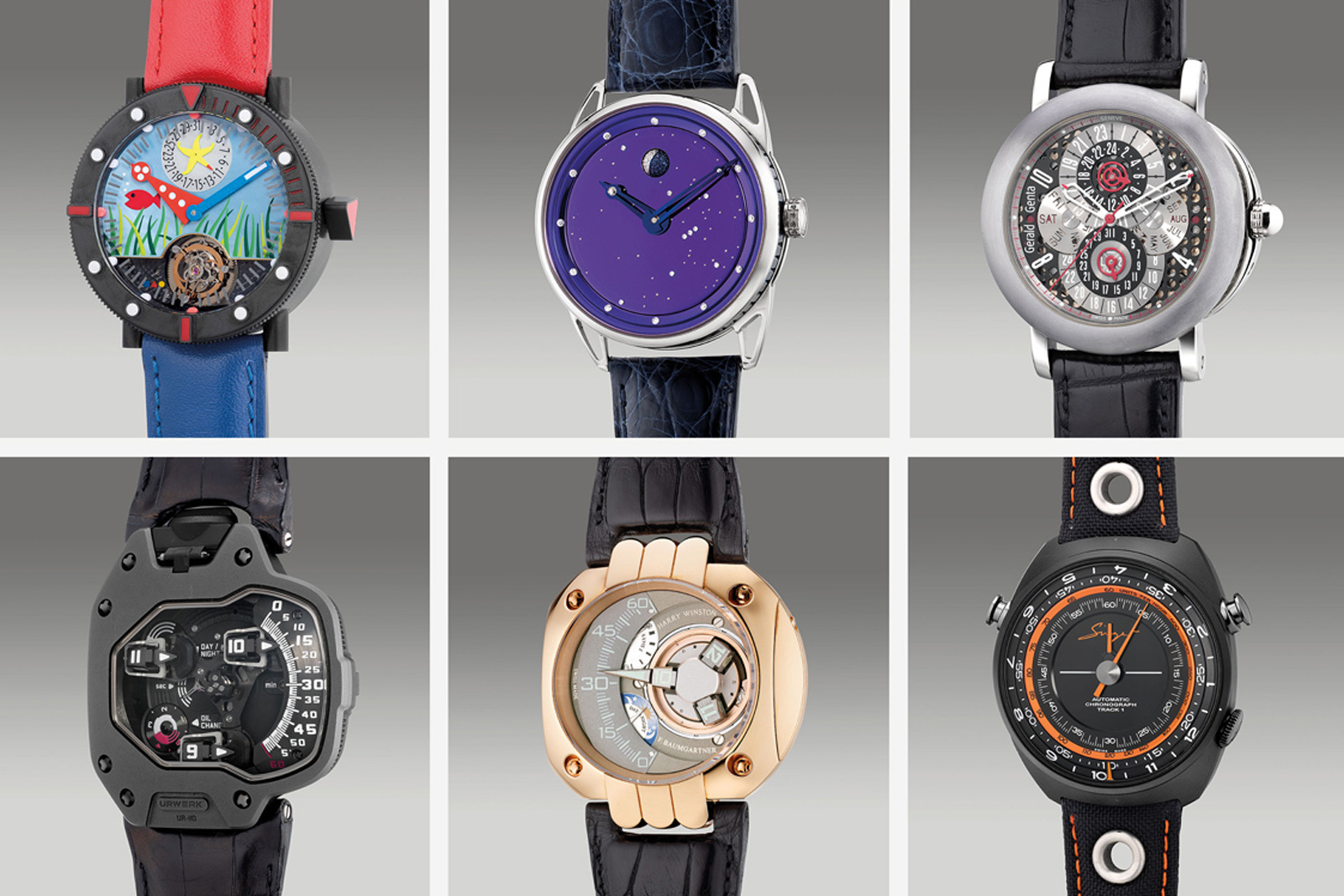 Having rounded up some of the interesting and probably overlooked at Phillips’ upcoming Hong Kong watch auction, we now take a look at some of the independent watchmaking highlights in the sale.

In his 1990s heyday, Alain Silberstein was rebellious and avant-garde, standing in stark contrast to the strictly conservative style that dominated high horology at the time. This watch is from the early 2000s, but still very much a quintessential Alain Silberstein creation. 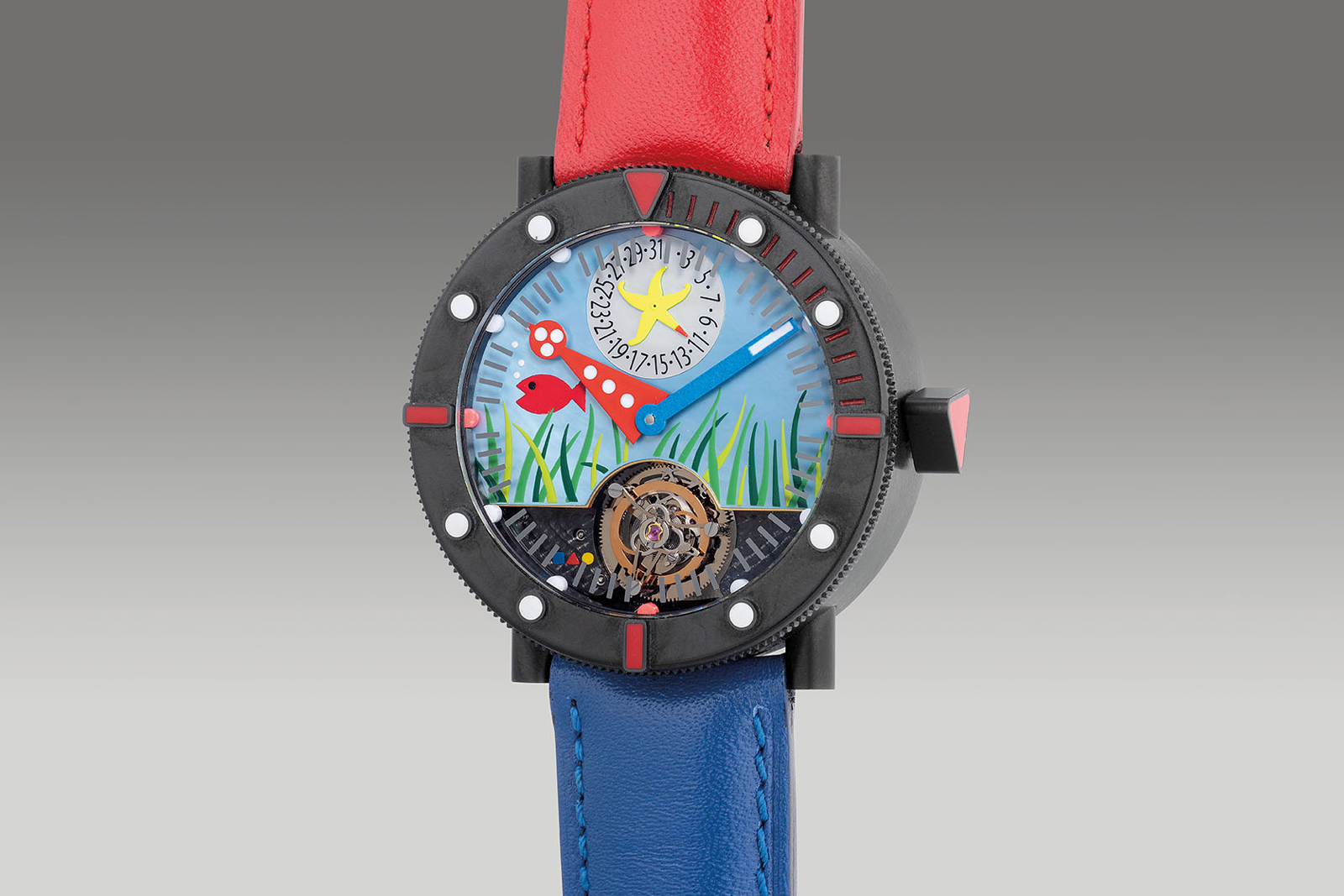 The dial is quirky and playful – the deep sea rendered in cartoon. Despite its whimsical style, its design is excellent. Made up of myriad elements in terms of colours and shapes, the whole is greater than the sum of the parts. The diving bezel evokes a porthole, through which a fish and starfish amidst the seagrasses can be observed. And the dial motif is painted on mother of pearl, reinforcing the marine theme.

Like all Silberstein tourbillons of the period, this is powered by a movement made by Swiss Time Technologies (STT), a company once known as Progress Watch that established to produce affordable tourbillon movements. STT was later acquired by Bovet, and is now known as Dimier 1738, which supplies most of Bovet’s complicated movements. 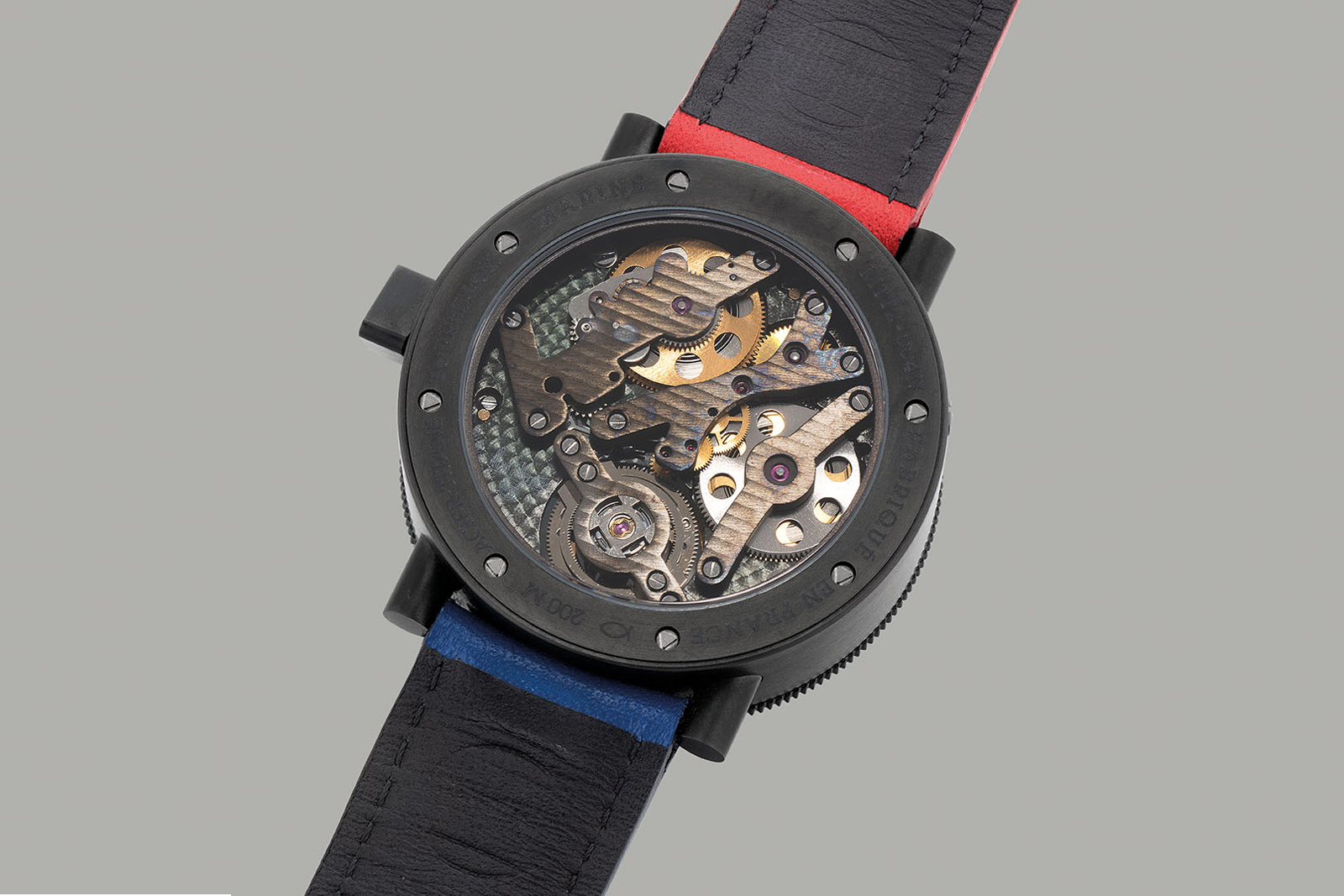 This Tourbillon Marine is the first of its nine-piece edition, and is completed with all original accessories. Offered with no reserve, it has a modest estimate of HK$70,000-140,000, or about US$9,000-17,900, making it one of the best value propositions in the sale – full lot details here. 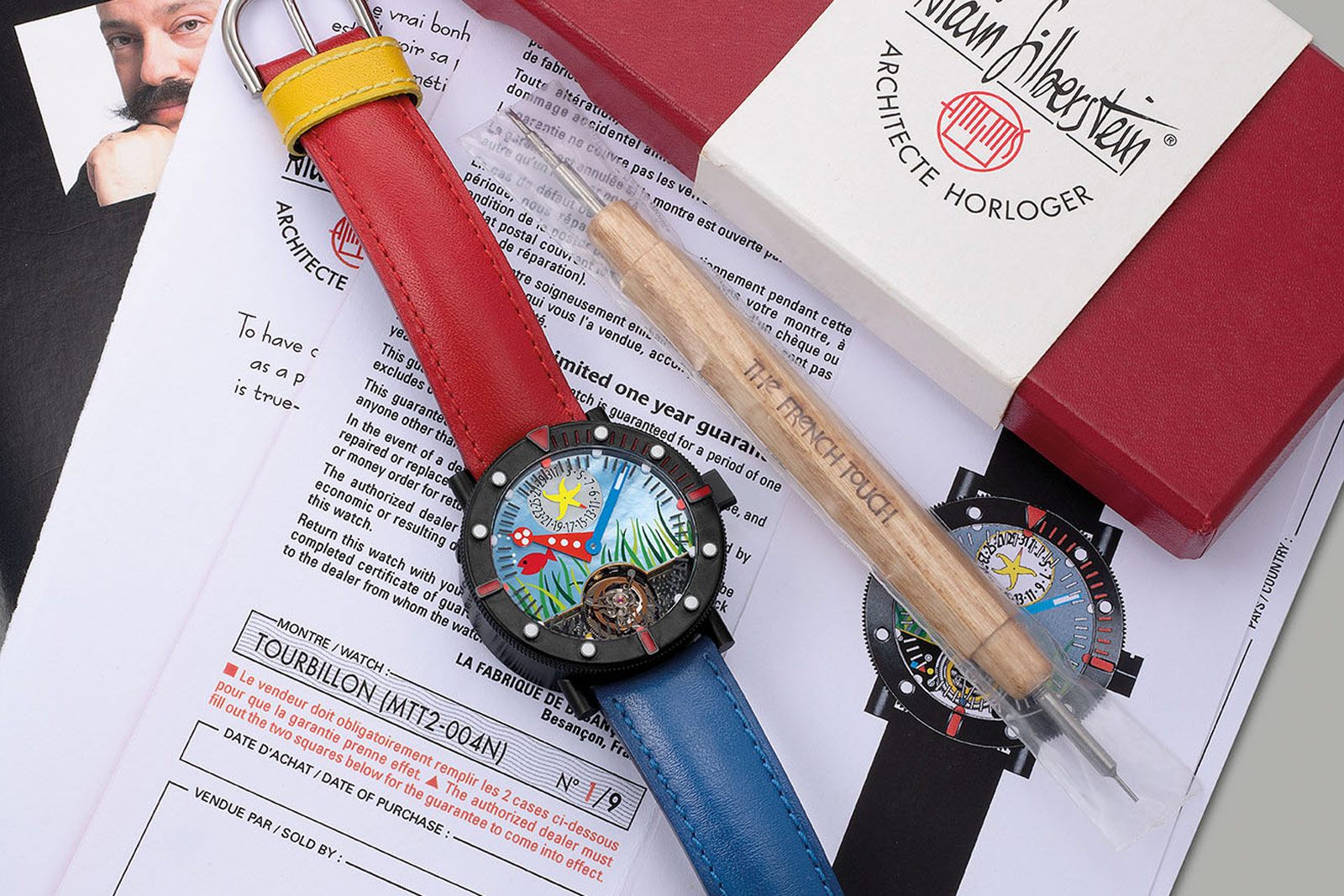 If Alain Silberstein was representative of 1990s independent watchmaking, then De Bethune is quintessentially 2000s. Along with contemporaries such Urwerk and Richard Mille, De Bethune is one of the most prominent independent brands today, albeit on a far smaller scale.

The present example is discreet – it’s a wearable 40 mm case with a striking but simple dial done in the brand’s trademark night sky motif. But up close, the DB25 Starry Night reveals subtle flamboyance. 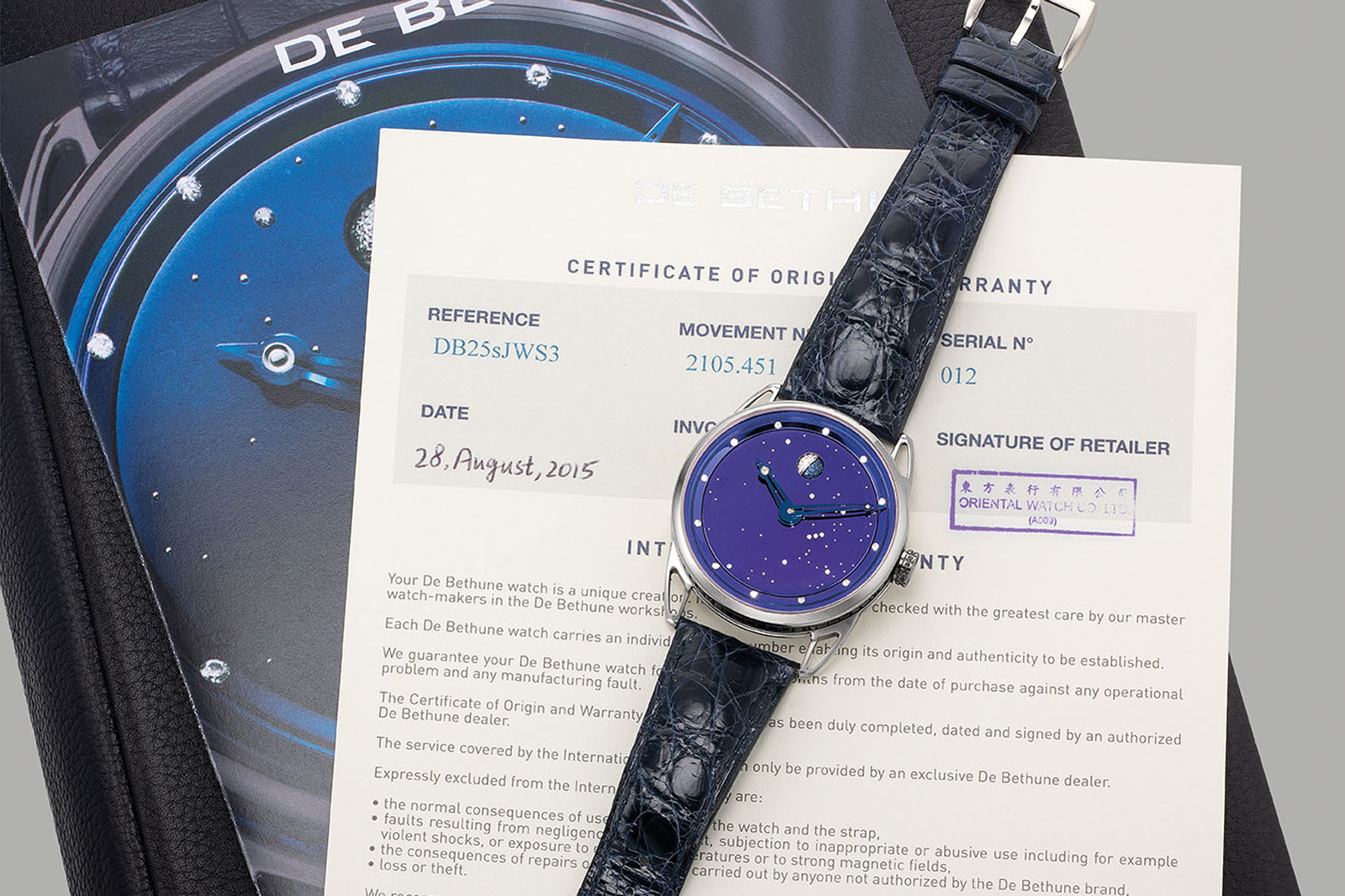 Most obvious are the baguette-cut sapphires that ring the case flanks, inspired by early 20th century formal-dress pocket watches. Furthermore, the dial is set with a handful of brilliant-cut diamonds to go along with the white gold studs, all representing stars of the night sky. Similarly, the spherical moon phase is covered in 44 diamonds and an equal number of sapphires. 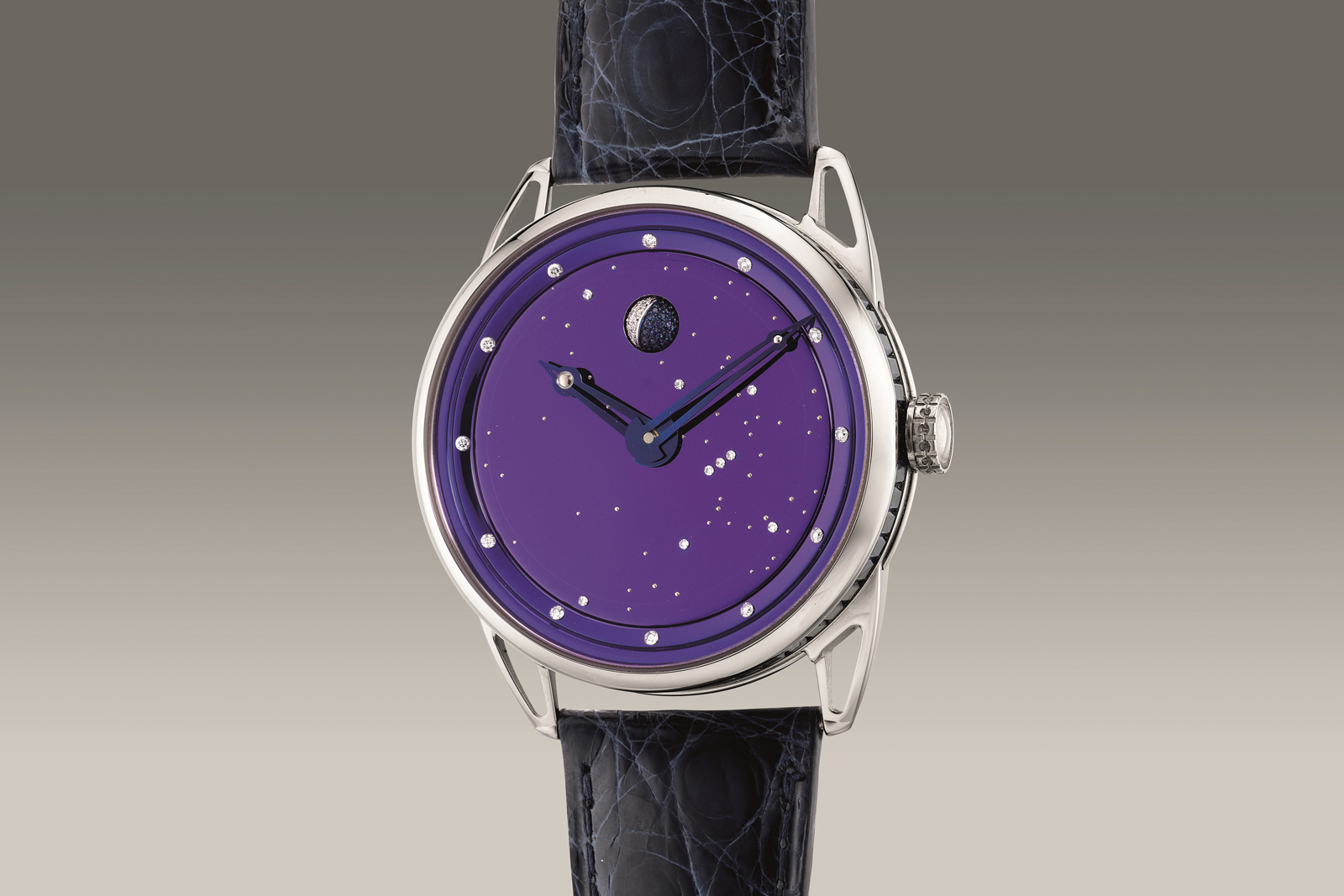 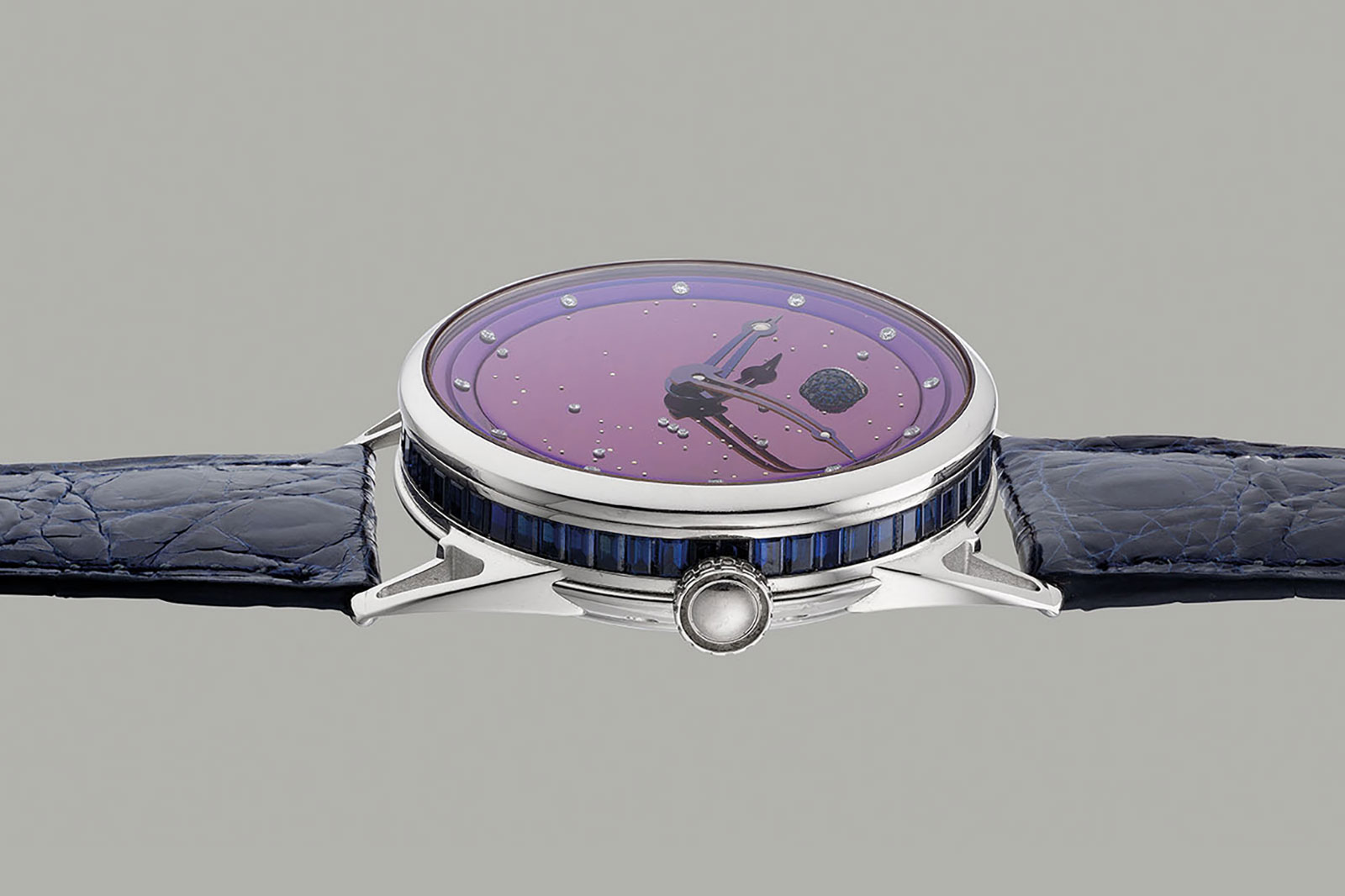 Under the subtly bling dial is a surprisingly advanced movement. Not only does it have six days of power reserve, the calibre incorporates several patented features, including a triple para-chute shock absorber, titanium balance wheel with white gold weights, and a silicon hairspring with a proprietary terminal curve.

The finish of the movement draws on 19th century Chinese market pocket watches, with mirror finishing on the delta-shaped barrel bridge as well as the base plate. 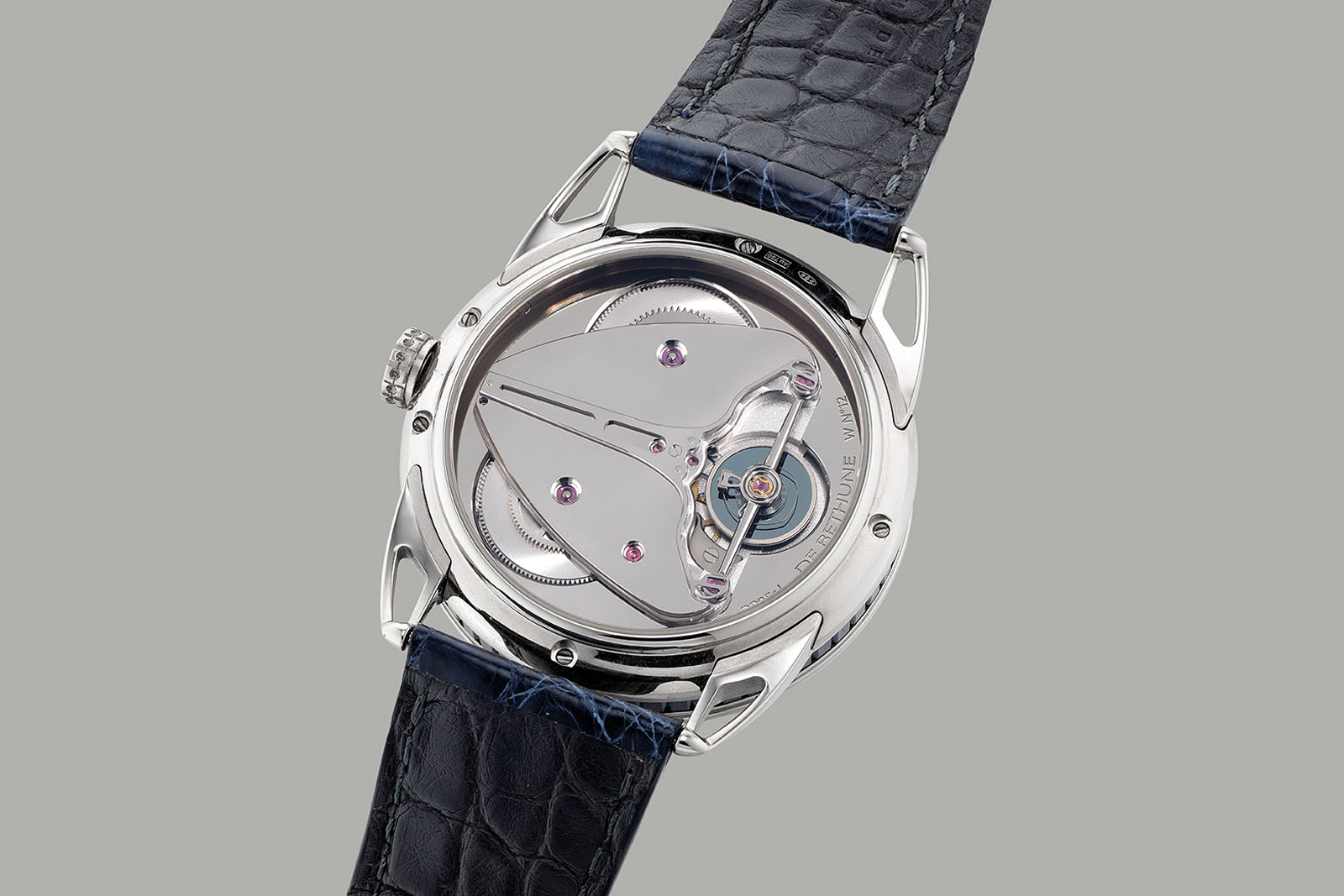 The late Gerald Genta was definitely an outlier amongst watch designers, being successful early in this career, and even now, almost five decades later. His twin 1970s designs – the Royal Oak and Nautilus – are some of the hottest watches now.

Genta’s success allowed him to set up his own brand in 1969 and went on to produce extraordinary complicated watches such as the Grand Sonnerie. He later sold his brand to Singapore retailer The Hour Glass, which then sold it on to Bulgari. 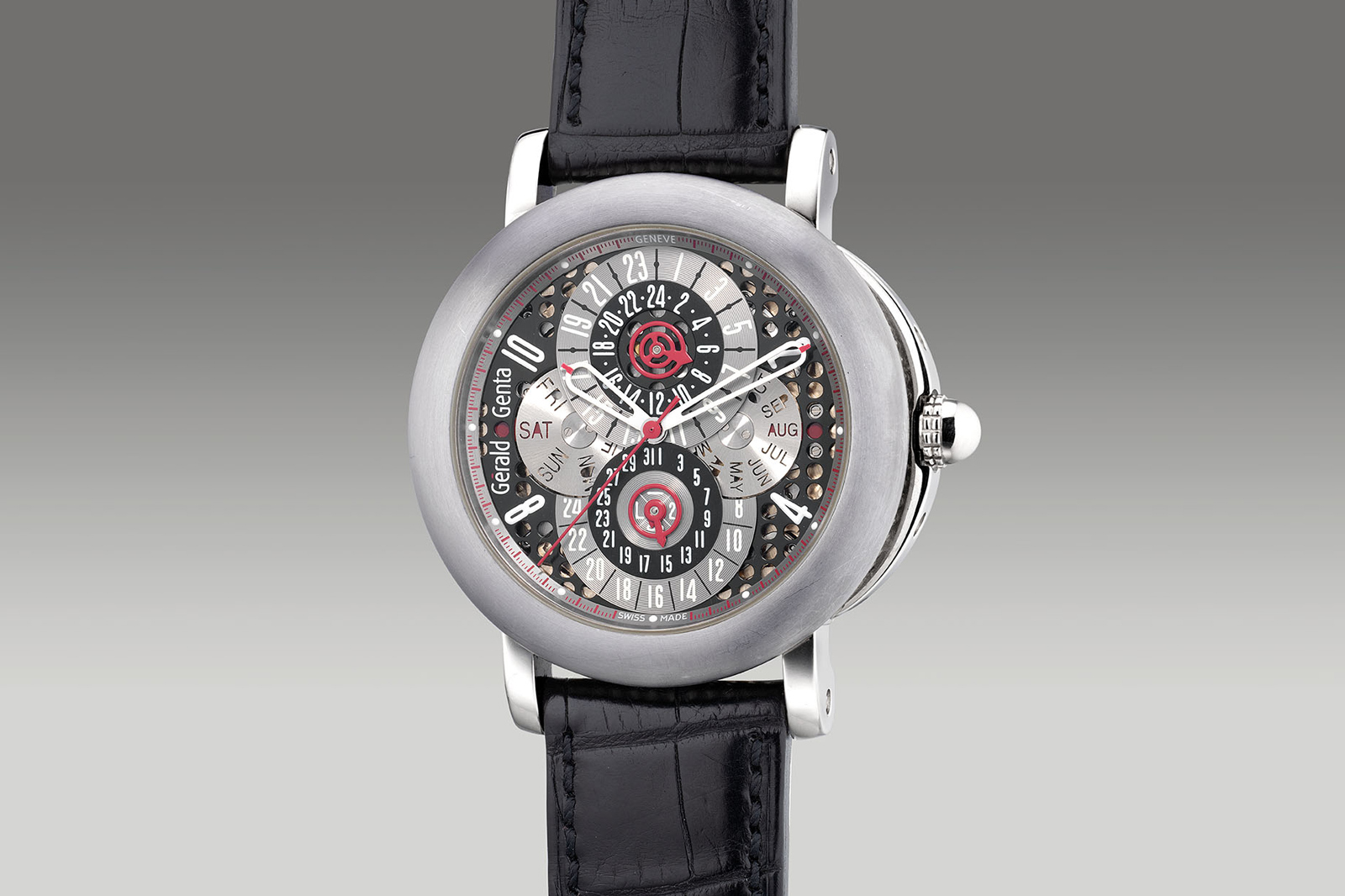 This Arena Perpetual Calendar is a Bulgari-era watch that adopted the round case designed by Genta himself in the 1990s, but on a larger scale and in unusual materials.  It has a distinctive aesthetic, along with an extra-large case of 46 mm that is white gold with a tantalum bezel. 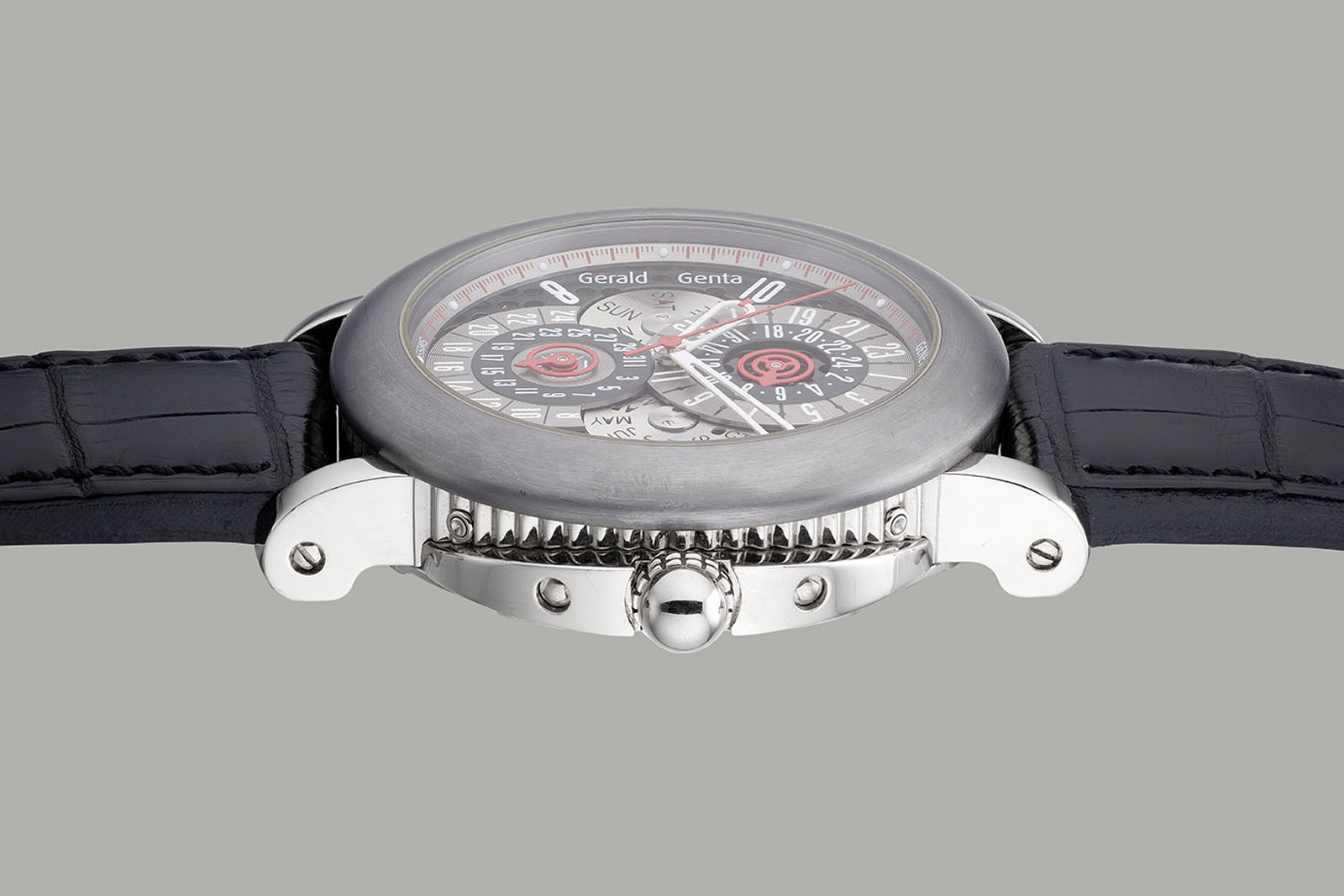 The white gold case has vertical fluting on its flanks, a detail still found in the current Bulgari-Gerald Genta lineup

The watch is unusual in style, being relatively sporty in size and build – the case is rated to 100 m – but still being a classical perpetual calendar.

The dial is partially open-worked with a perforated pattern revealing the calendar mechanism underneath. Also open-worked, both the day and month discs are exposed in their entirety. And thanks to a large case, the dial accommodates an second time zone display at 12 o’clock along with the date at six – both large enough to be instantly legible. 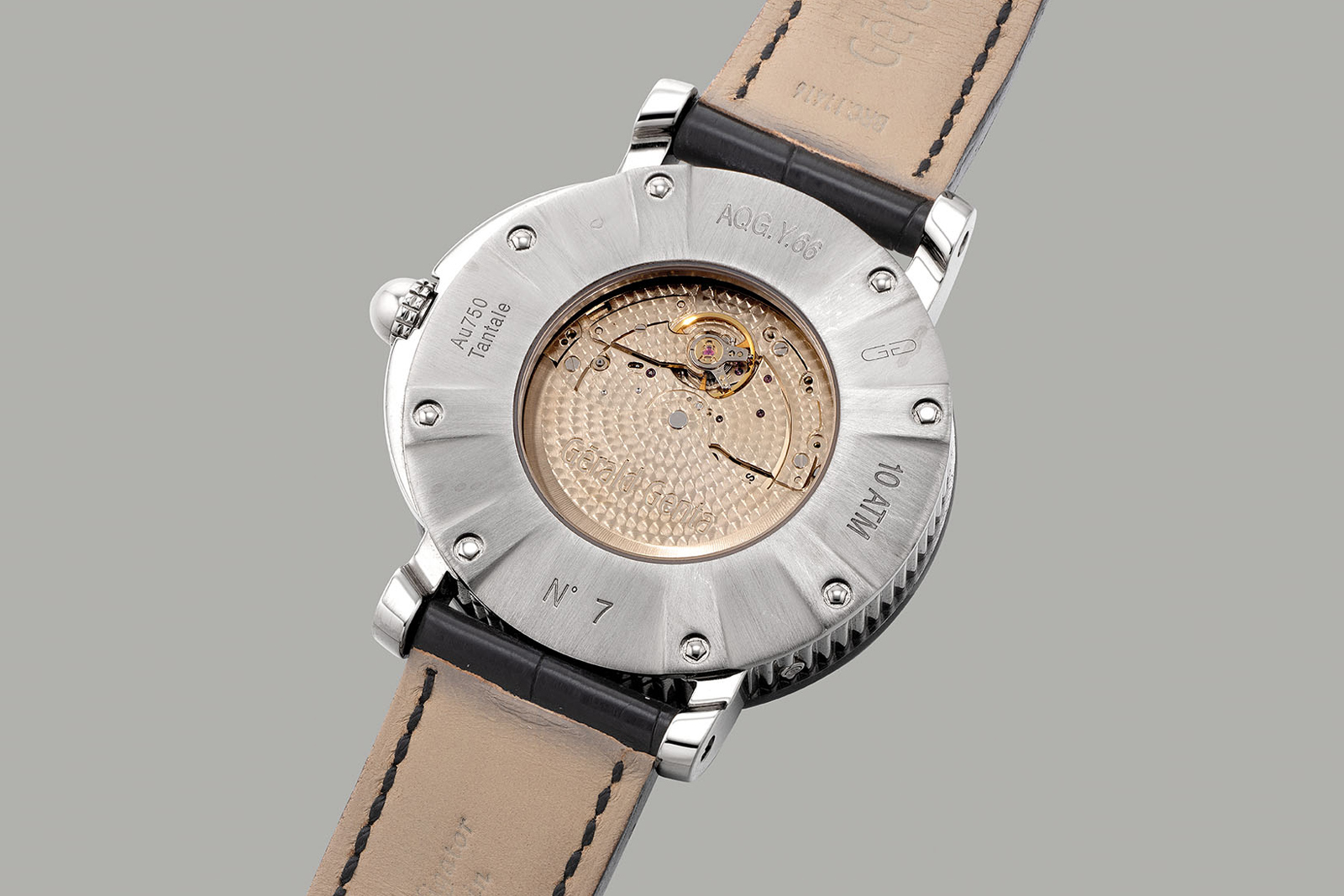 A pioneer in atypical displays of time, Urwerk’s defining complication is the satellite cube complication that debuted in the collaborative Harry Winston Opus V of 2005, which follows below.

Urwerk later followed up with its very own satellite-cube watch with the UR-201 of 2007. Though the complication was historically restricted to the top-of-the-line models of the “UR-2” series, namely the UR-210 and UR-220, Urwerk once installed it a “UR-1” series model.

Something of an outlier in the Urwerk catalogue, the UR-110 isn’t as fancy as the watches of the “UR-2” series – it lacks a retrograde minutes display – but still boasts the satellite-cube hours. 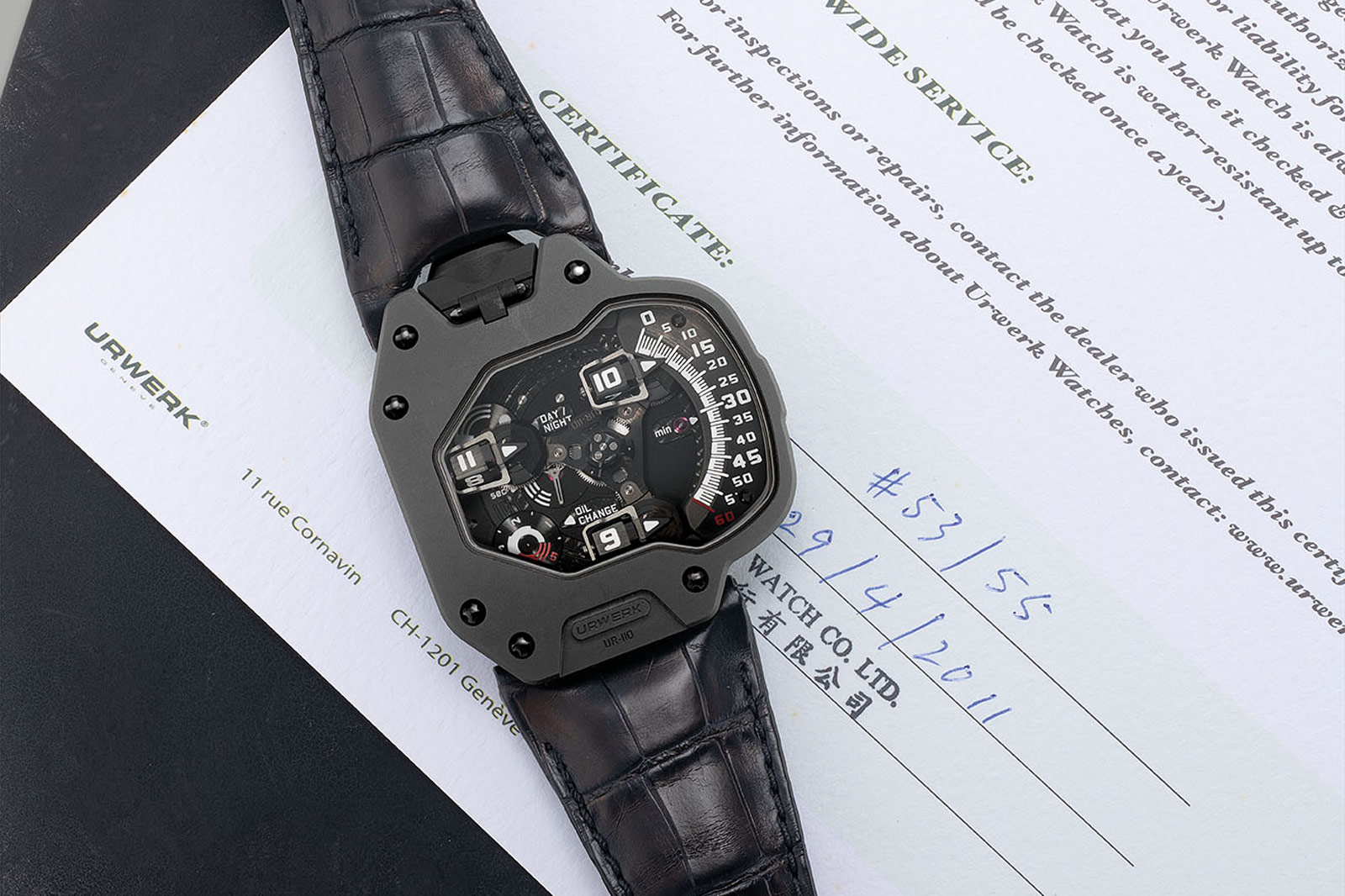 Patented by Urwerk, the satellite cube is very much a highly complicated mechanism, but telling time is eminently easy – the cube displays the hour, while the tip points to the minute.

The triple satellite cubes tell the hours, with each cube having four faces, thus adding up to twelve hours. Each cube rotates on its own axis, as well as orbits around the centre of the dial on a carousel.

And the case is interesting in its own right, with an avant-garde, asymmetric form that’s distinct from other Urwerk models that are typically symmetrical. 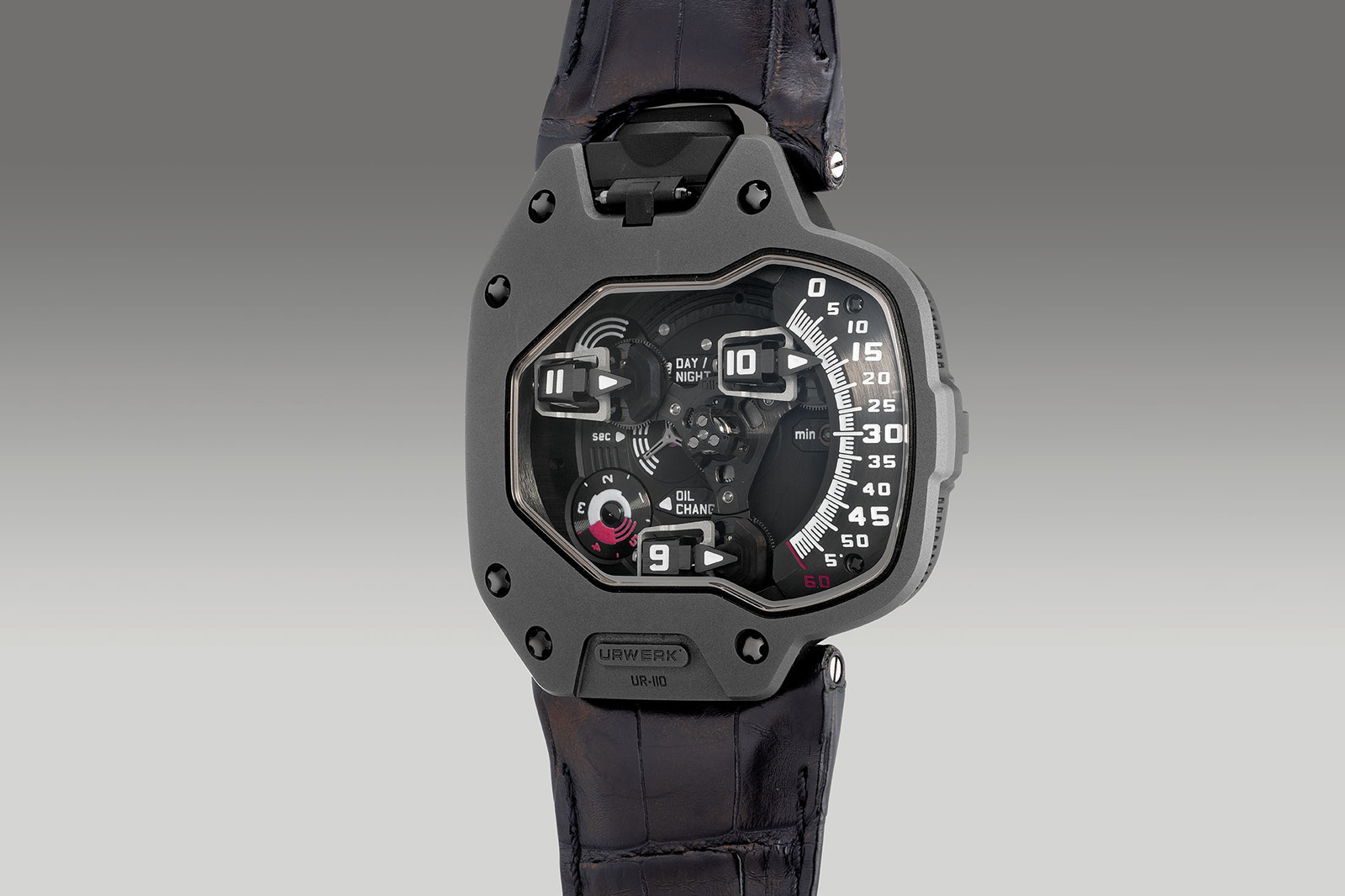 On the back is an intriguing regulating system for the winding rate. Made up of a pair of “turbines” or spinning discs, the system controls the winding rate according to the activity of the wearer to maximise winding efficiency and minimise wear on the winding mechanism. 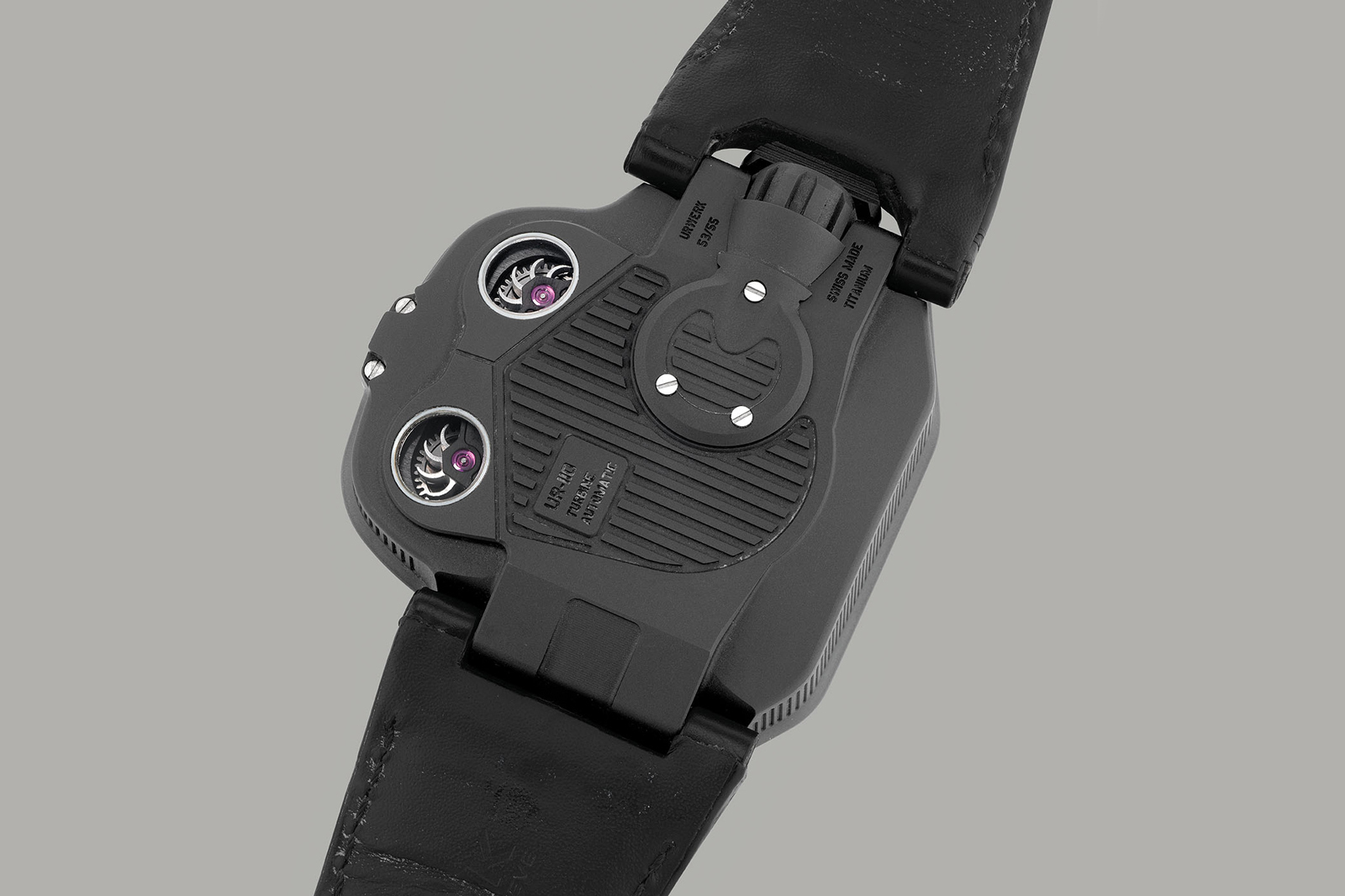 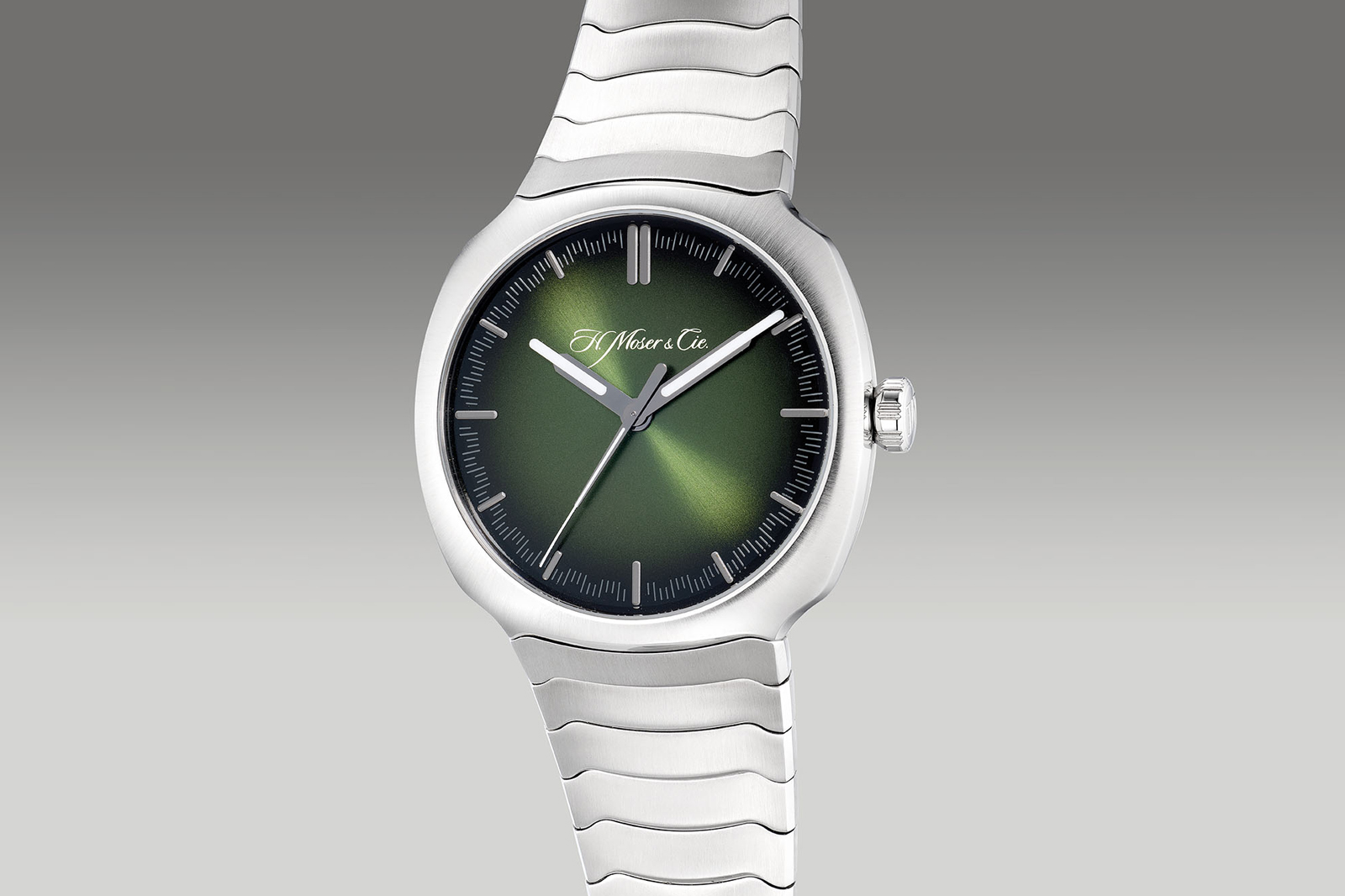 Interestingly nuanced, the case and bracelet bring to mind designs of the late 1970s and 1980s. The case architecture is squarish in broad strokes but enhanced with with fluid, curved edges. And despite having a stepped case side that evokes sandwich construction, the case is one piece. Flowing into the case is a bracelet with broad links that echoes the case shape, making it a truly integrated bracelet. 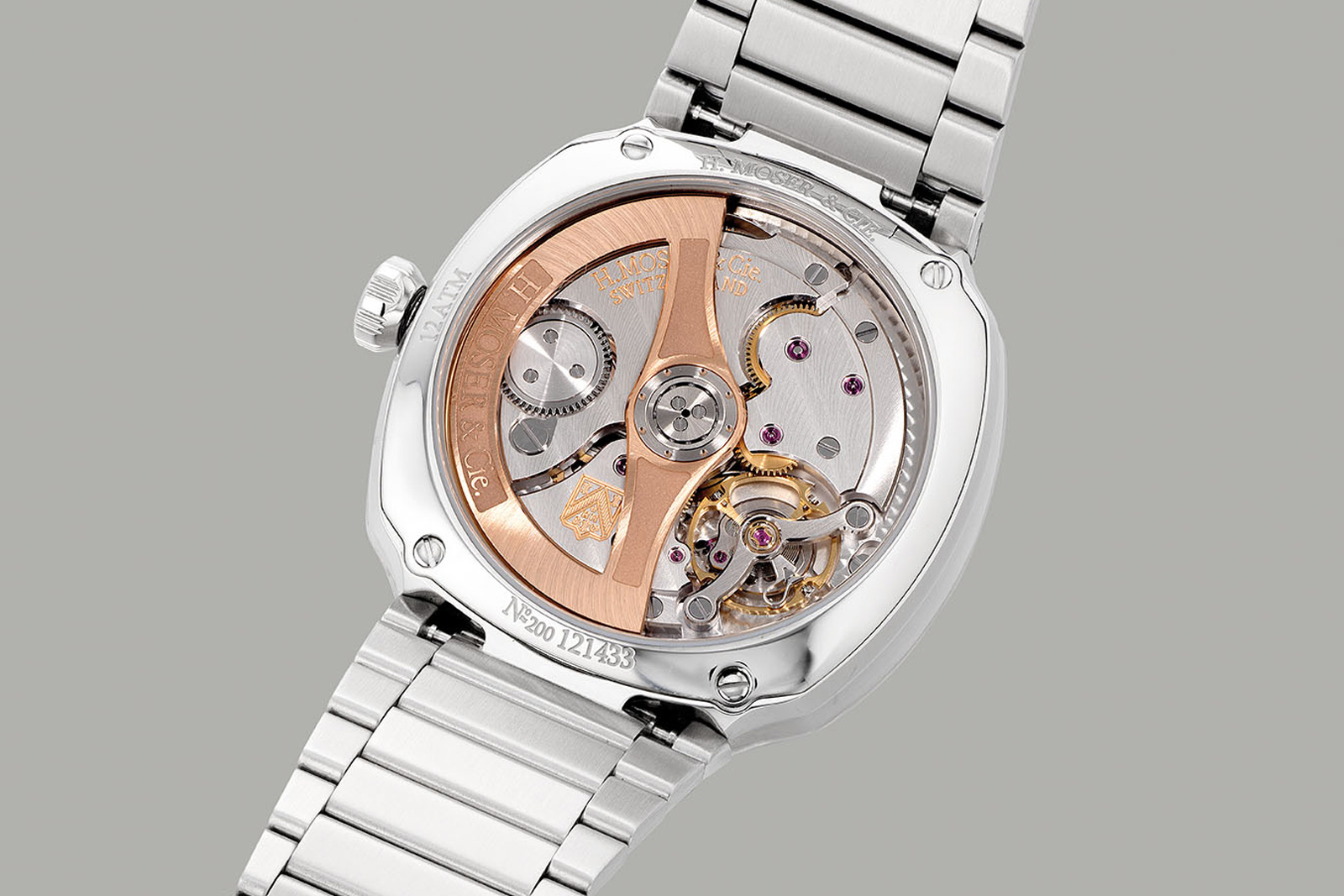 While the case is novel, the dial is quintessential Moser – a fumè affair in smoked green. The colour was unconventional when the watch was launched last year – most of integrated-bracelet sports watches were dressed in blue – the colour has become fashionable this year, which conveniently adds to its desirability. 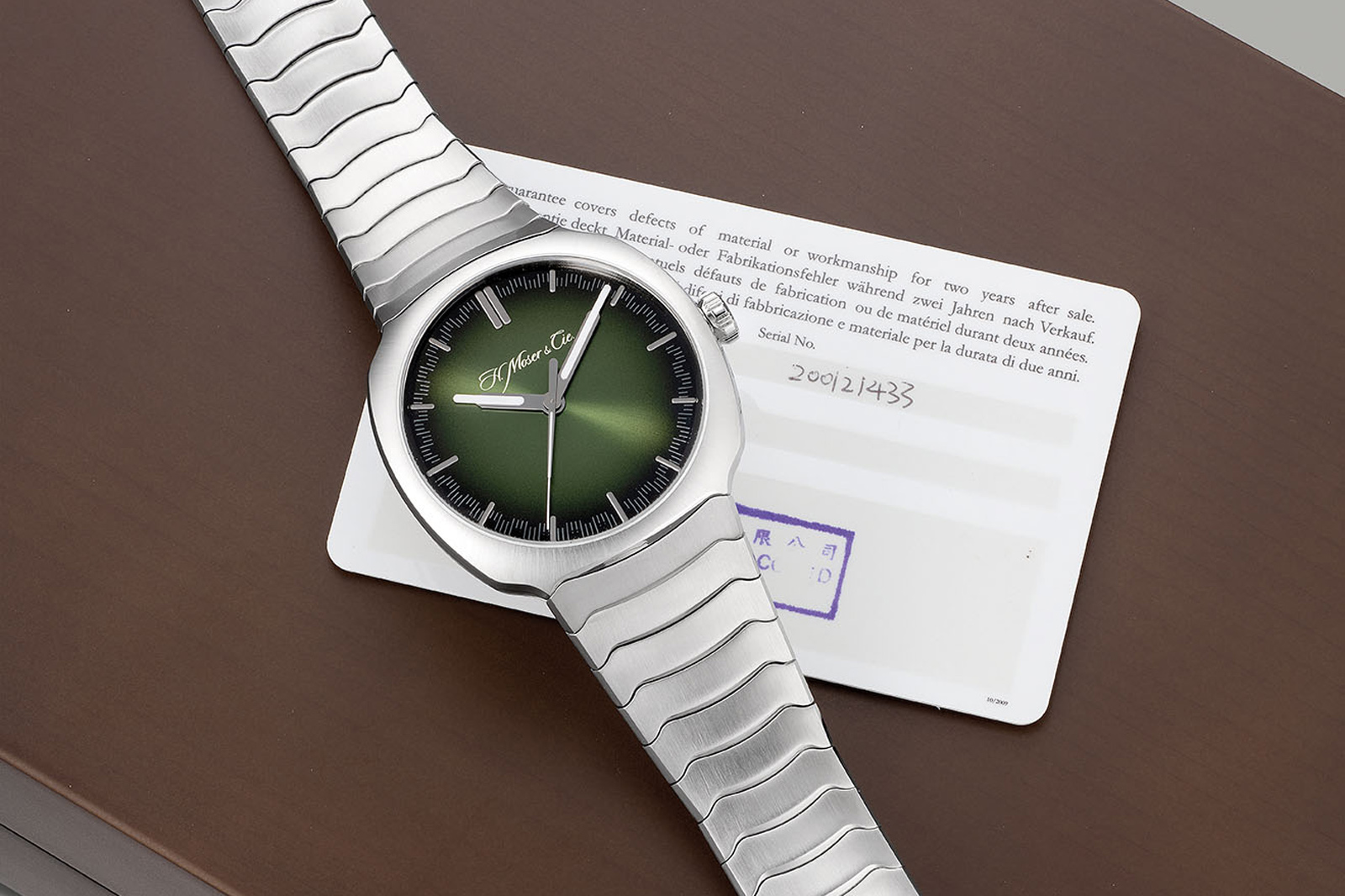 Urwerk’s most important complication, the satellite-cube display premiered in 2005 in the Harry Winston Opus V.

While the satellite cube display is no doubt the most potent feature of the Opus V, the aesthetics of the watch are impressive. The look is strikingly different from Urwerk’s house style, yet contains enough of the watchmaker’s DNA to make it an Urwerk. The pink gold is hefty and stunning – massive enough that it’s unwieldy on the wrist – evoking a richness that brings to mind classical Greek architecture, which was exactly the inspiration behind the three bands on the lugs that are modelled on the archway that fronts Harry Winston’s New York store. 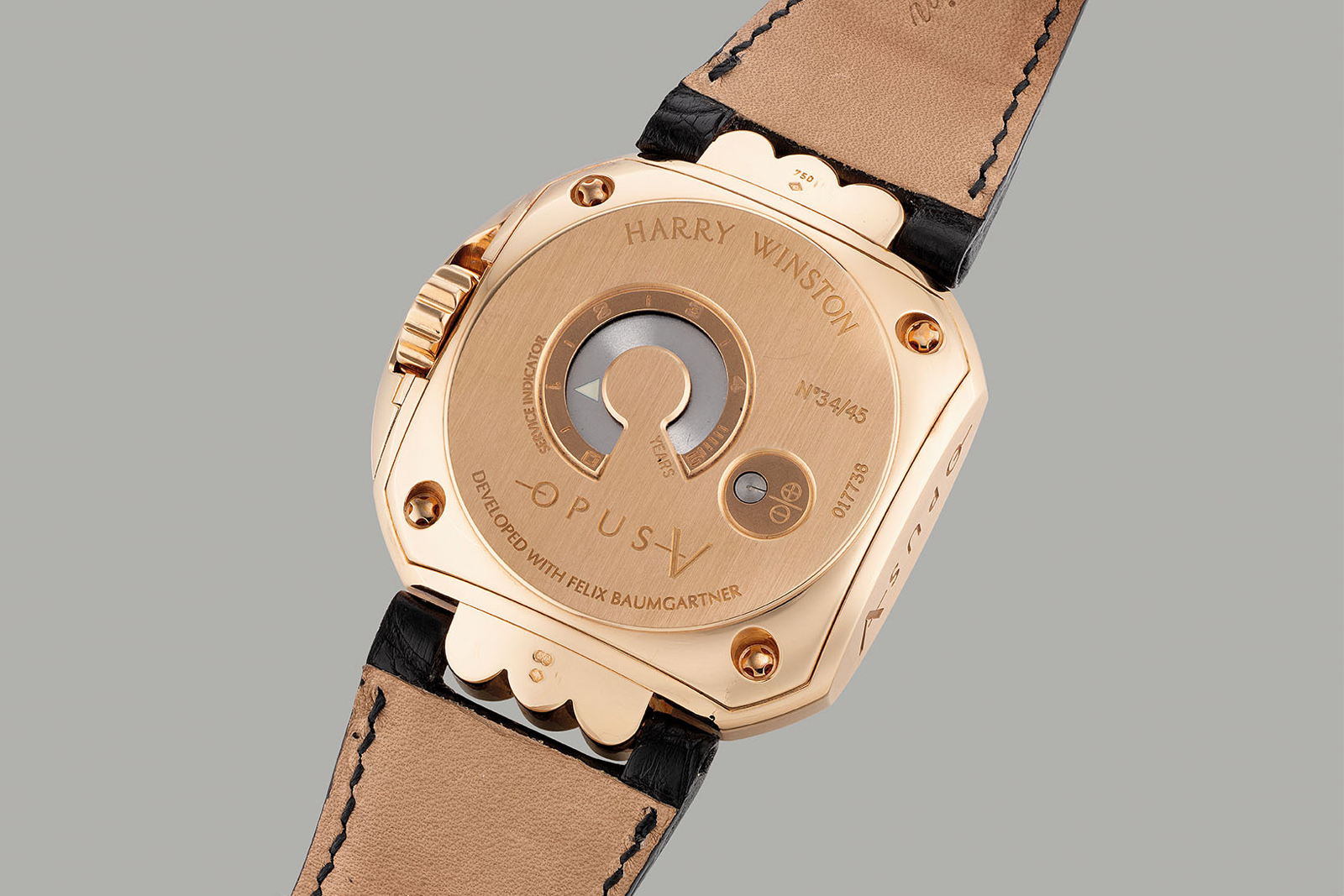 Best known for its heavily-modified Porsche 911s – specifically the 964 of the early 1990s – Singer Vehicle Design ventured into watchmaking four years ago. Despite its youth, Singer Reimagined’s debut was a significant one: the Track 1, a chronograph impressive in both design and engineering.

Modelled on 1970s auto-racing chronographs, the Track 1 is a “bullhead” chronograph –meaning its pushers are at one and 11. The present example is a Hong Kong Edition of the Track 1, dressed in a high-contrast orange and black that evokes the livery of race cars. It’s made even more unusual with the starkly clean dial, possible thanks to the innovative Agenhor chronograph movement within. One of the most the most legible and intuitive chronographs on the market, the Track 1 shows the elapsed seconds, minutes, and hours on the same central axis.

Time-telling, on the other hand, is moved to the outer edge of the dial – the orange pointer at six indicates the hours and minutes, both on discs.

The Agenhor movement is cleverly designed and engineered to a high level. For starters, it’s an automatic movement with its rotor in between the base plate and the dial, leaving nothing to obscure the chronograph mechanism on the back. Beyond its novel architecture, many key sections of chronograph mechanism were re-invented, such as the “AgenClutch”, which combines the best features of the vertical and horizontal clutches, namely precise engagement and a flat layout. In short, it’s one of the most innovative modern chronograph movements. H. Moser & Cie. was revived in 2005 with the Perpetual 1 as its flagship watch for good reason – it is a novel and clever perpetual calendar that remains unrivalled in its minimalism.

Somewhat unbelievably, the dial packs in the date, month, and power reserve indicator, while the leap year indicator sits on the back. The smartest – and simplest – feature is the month indicator, which makes use of a tiny hand on the central axis that uses the 12 hour indices to show the months. 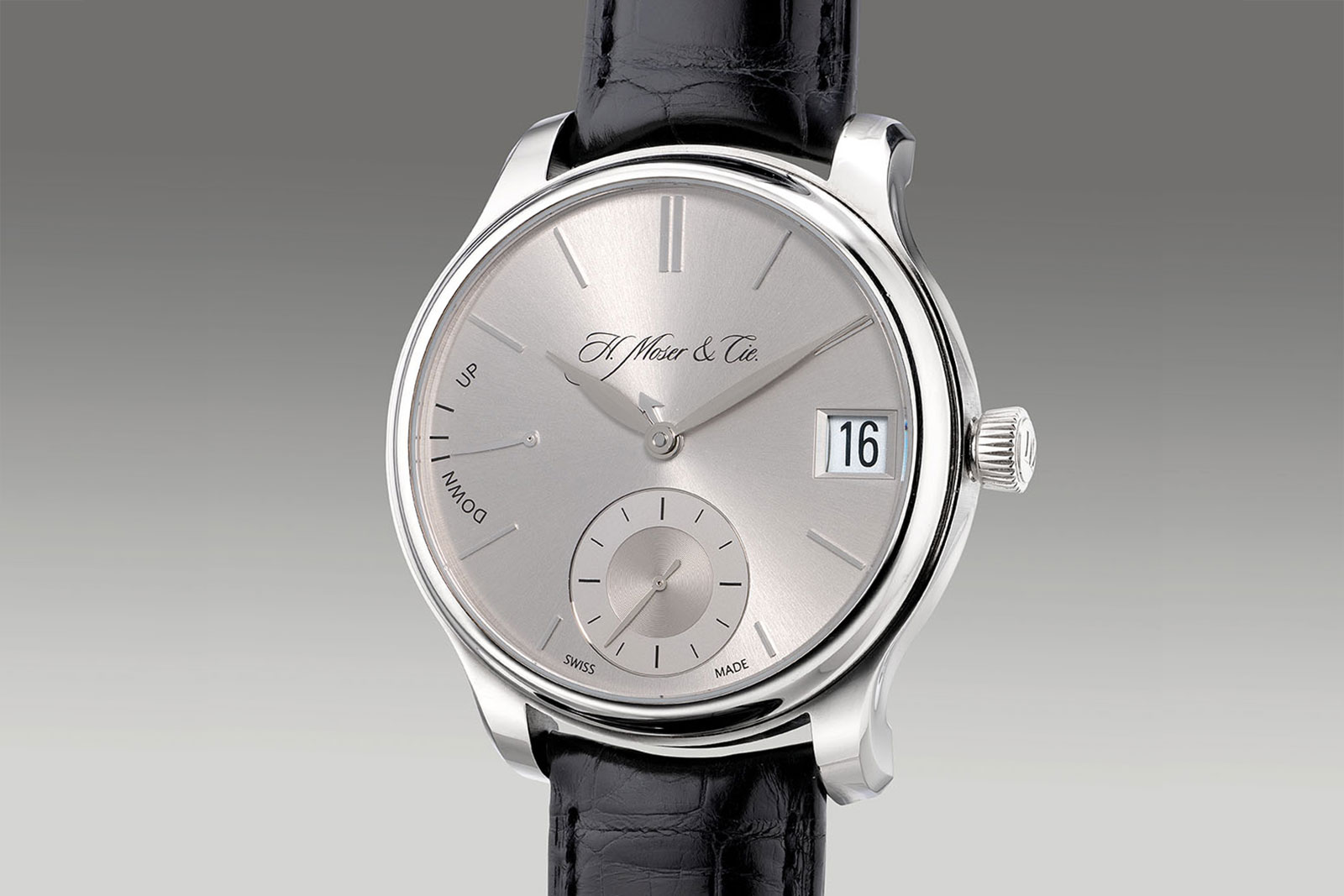 But its practicality goes beyond mere readability, as its has a convenient, week-long power reserve, particularly for a perpetual calendar that requires setting. Admittedly, it’s less of a hassle to set the Perpetual 1 than its peers – everything can be set backwards and forwards via the crown. 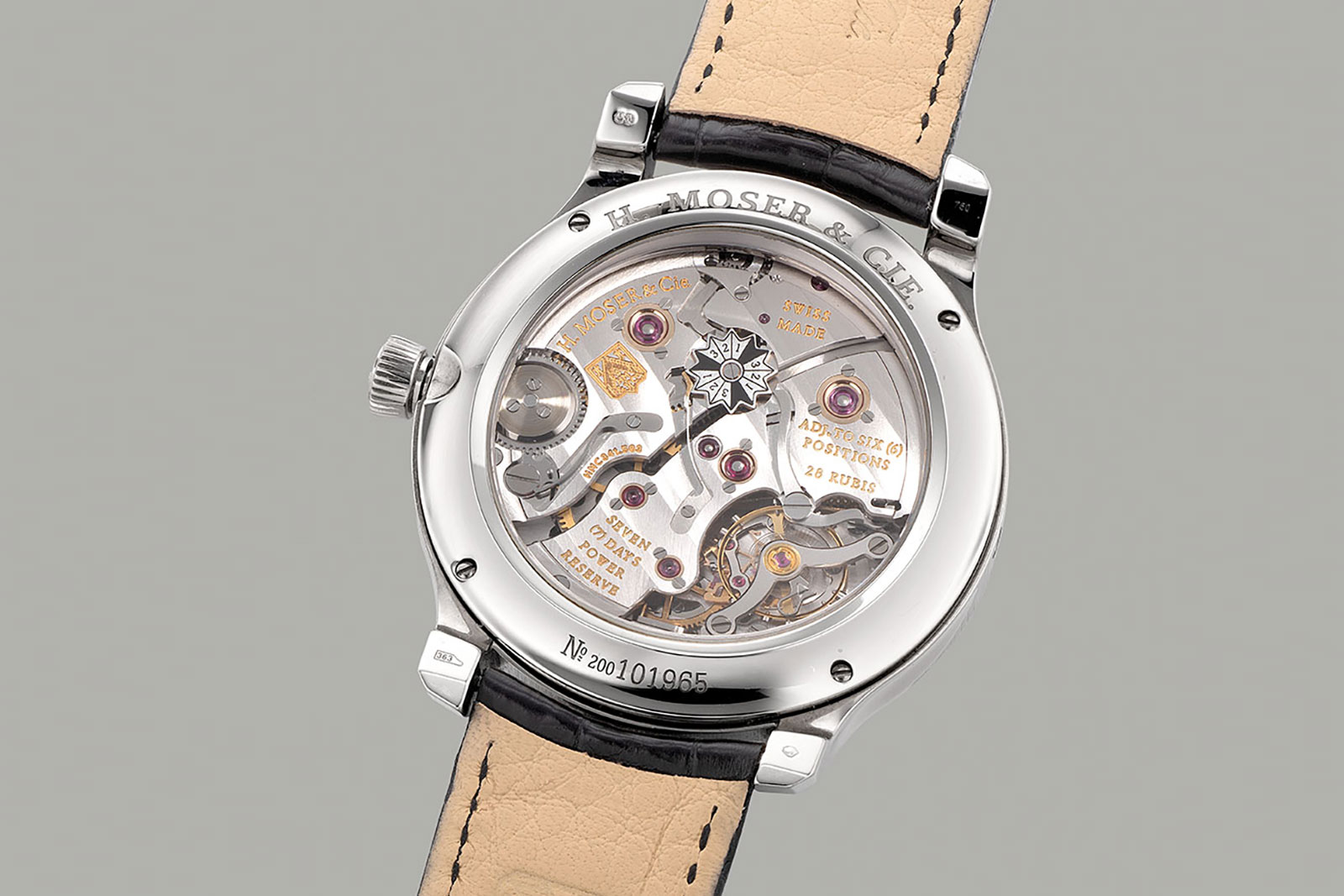 This example is an early-generation model, with a tone-on-tone aesthetic of a radially-brushed silver dial matched with a white gold case. Later versions of the perpetual calendar typically feature smoked dials, which are now a Moser trademark. 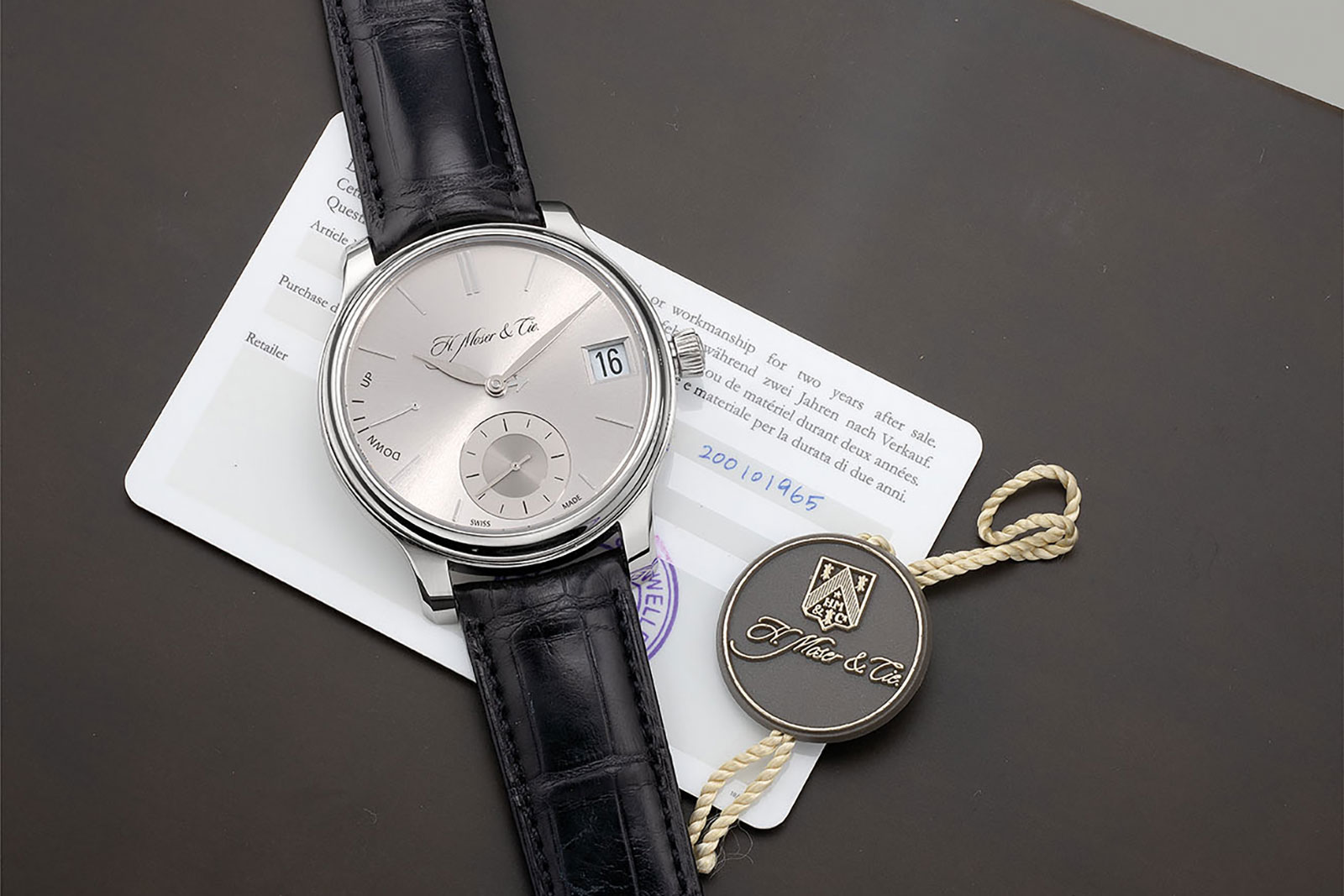 The classical dial finish means this is less fashionable than the later models with fume dials, but that brings the upside of affordability. This has an estimate of HK$115,000-195,000, or about US$14,700-25,000, which is tremendous for the complication – full lot details here.

All lots will be on show during the preview in Hong Kong during the run-up to the auction.

Both take place at the JW Marriott in Hong Kong.