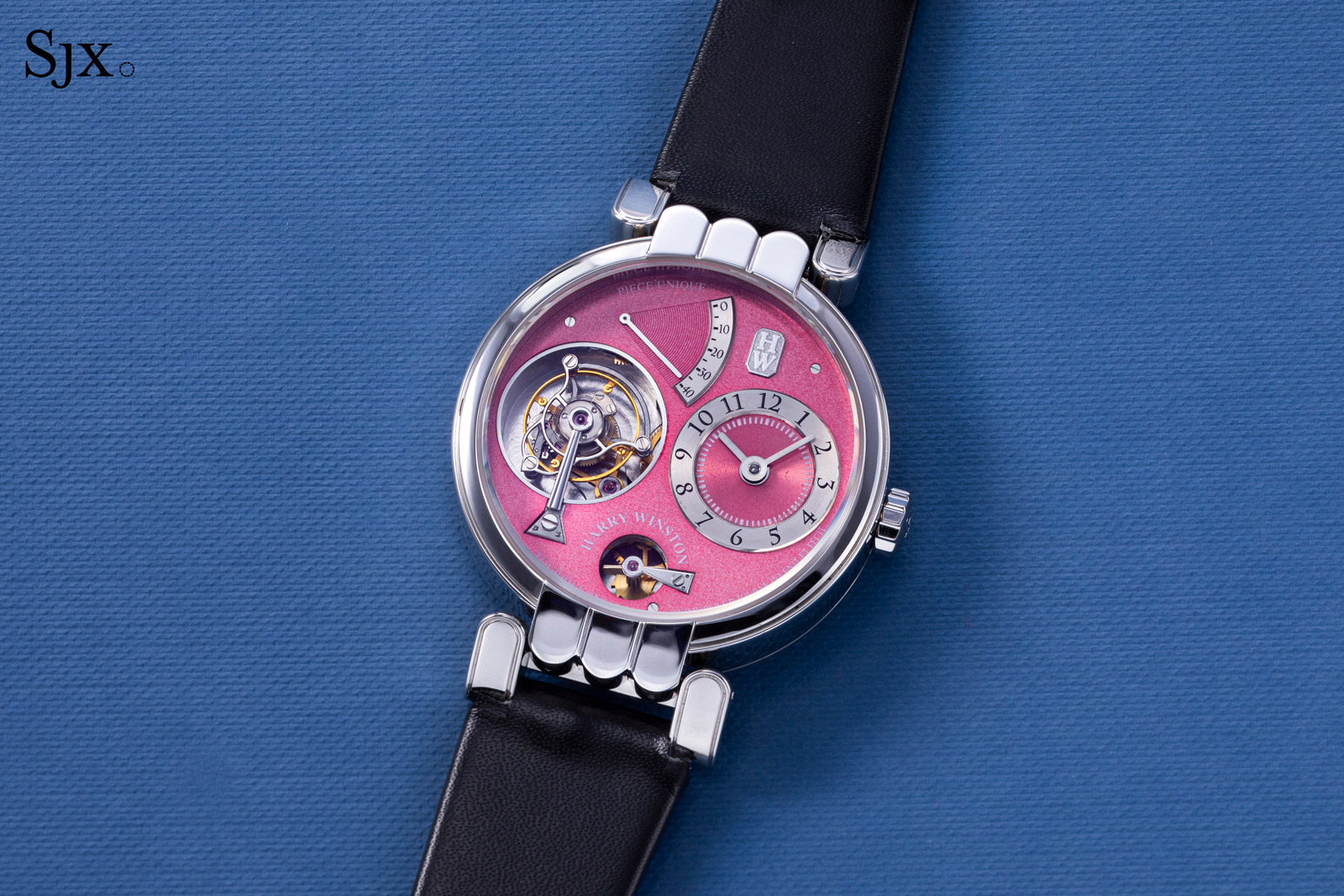 A variant of the fourth-generation F.P. Journe Tourbillon Remontoir d’Egalite, the Opus 1 Tourbillon was part of the inaugural project of the Opus series, the annual independent-watchmaker collaboration invented by Max Büsser of MB&F fame.

Named after the Opus One vineyard that’s also a joint venture between Americans and Europeans, Opus established Harry Winston as a bona fide watchmaker. Though Harry Winston has now put more emphasis on its primary jewellery business, its past Opus projects are mostly interesting and important examples of contemporary watchmaking. 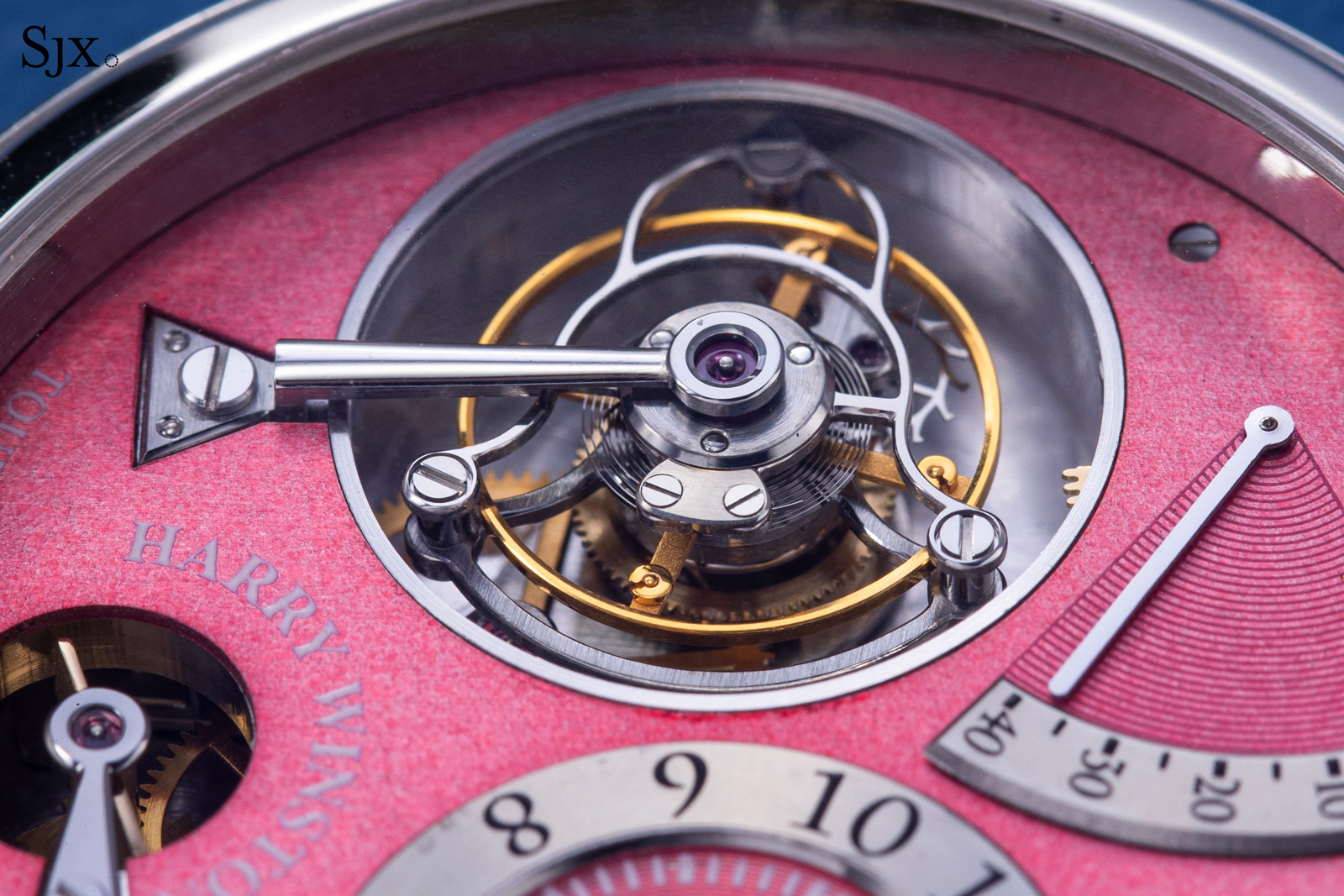 The Opus 1 was made up of three models – the Tourbillon, Resonance, and Reserve de Marche – each based on the equivalent F.P. Journe model, meaning an identical movement but a platinum case in the trademark Harry Winston style.

Phillip’s Hong Kong watch auction this weekend includes an Opus 1 Tourbillon, which is worth a closer look, if for no other reason than the fact that it’s one of the rarest variants of the early F.P. Journe tourbillon.

The Opus 1 – any one of the three versions – is a peculiar watch. It is fundamentally an F.P. Journe, yet feels nothing like an F.P. Journe. If you closed your eyes and compared the two in tactile feel, they’d be entirely different watches. But the dial layouts and movements are, of course, entirely the same.

I wore another Harry Winston model that’s identically-sized for a long period, and the Opus 1 certainly feels smaller than the equivalent F.P. Journe, despite being the exact same 38 mm diameter. 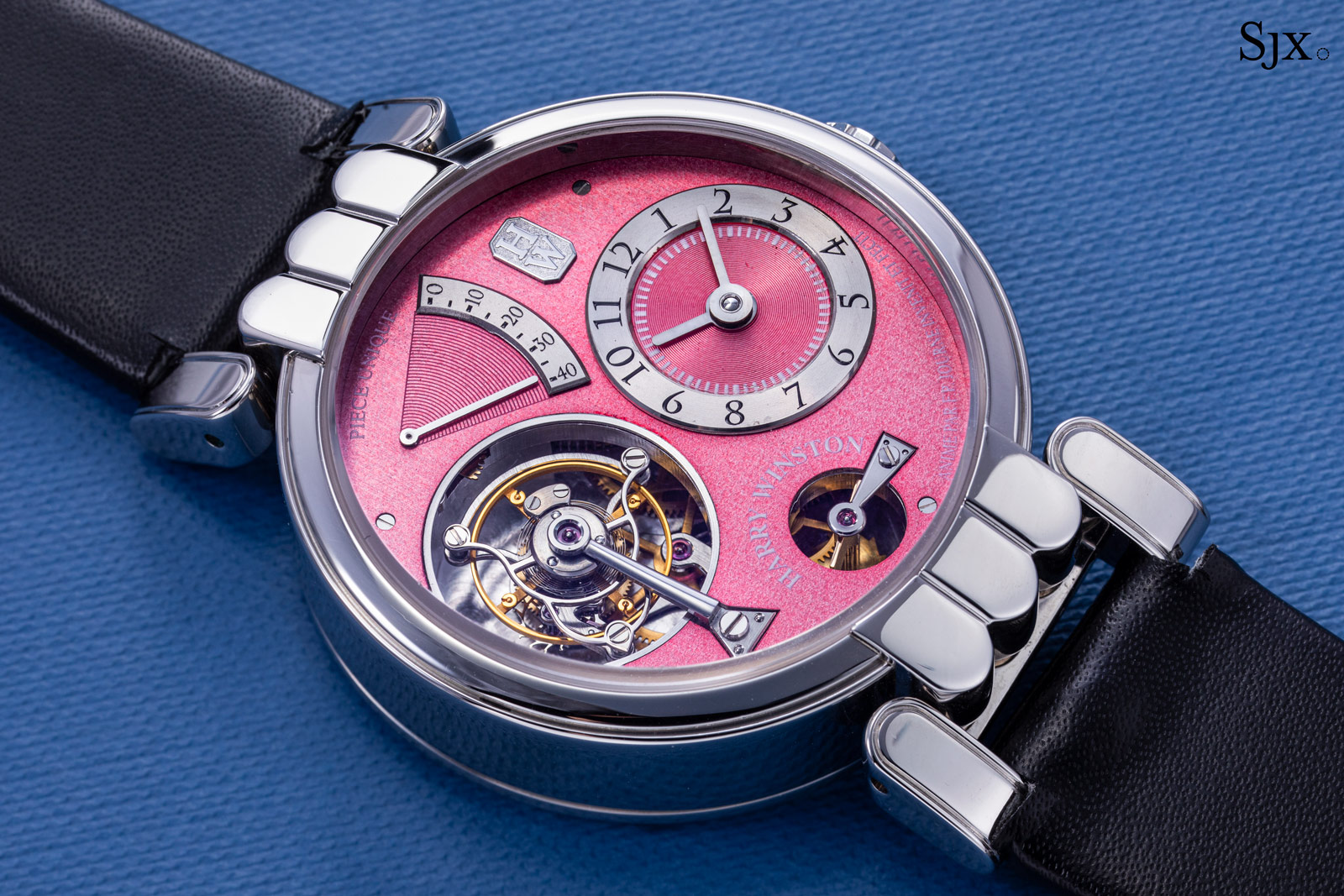 The disparity is perceived size is due to proportions – the Opus is quite a bit thicker than the F.P. Journe – and the chunky, hinged lugs that help shrink the case in relative terms.

Because of its proportions of the Opus 1 have a stout presence, and none of the Breguet-inspired elegance that characterises F.P. Journe watches. 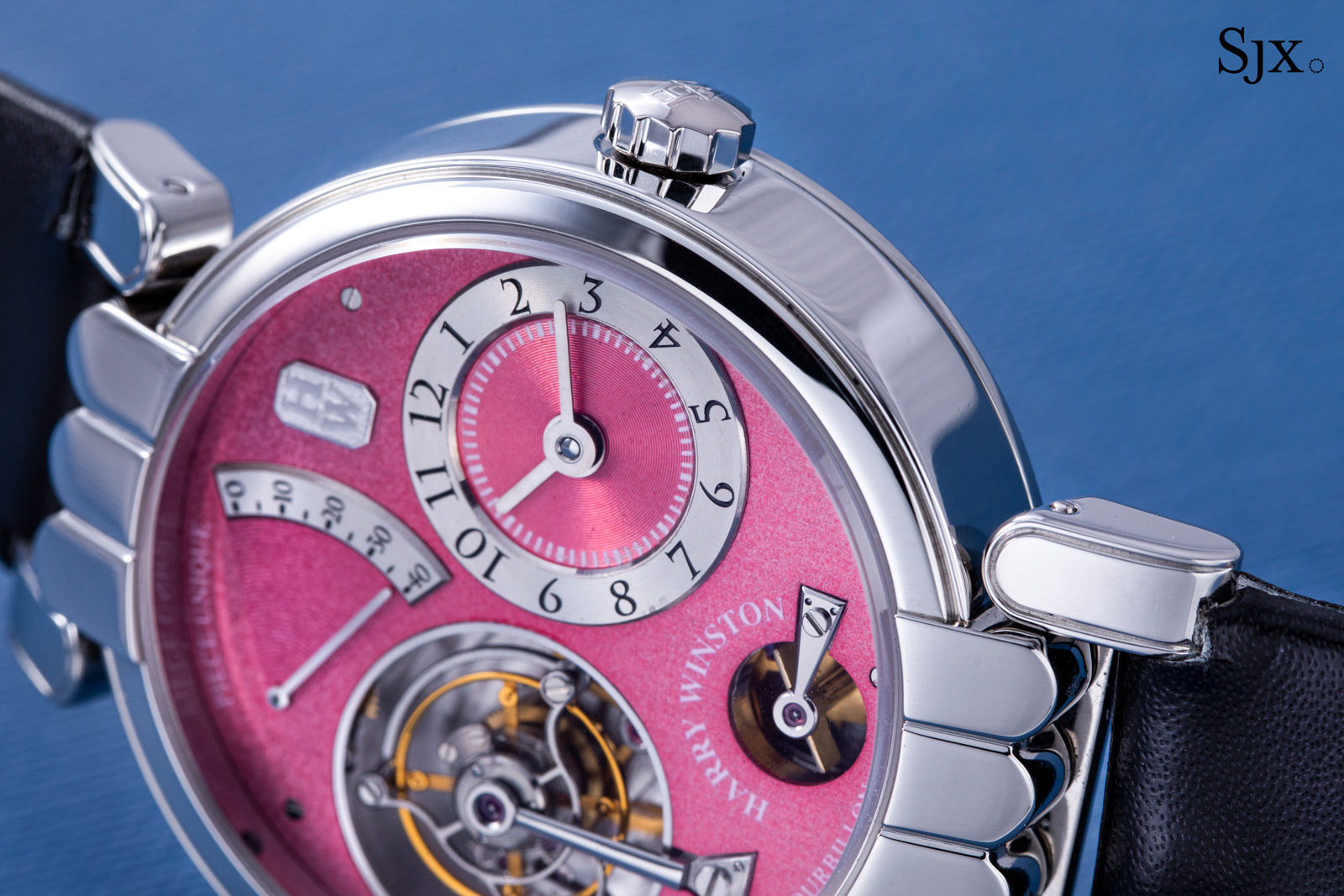 Only six each of the respective Opus 1 models were made, with each unique in dial colour (and a handful set with diamonds). They are all exceptionally rare watches.

But an Opus 1 tourbillon sold only a month ago at Phillips in Geneva for the equivalent of US$500,000 including fees, which is not that far off the value of an late-ish F.P. Journe tourbillon with a brass movement. 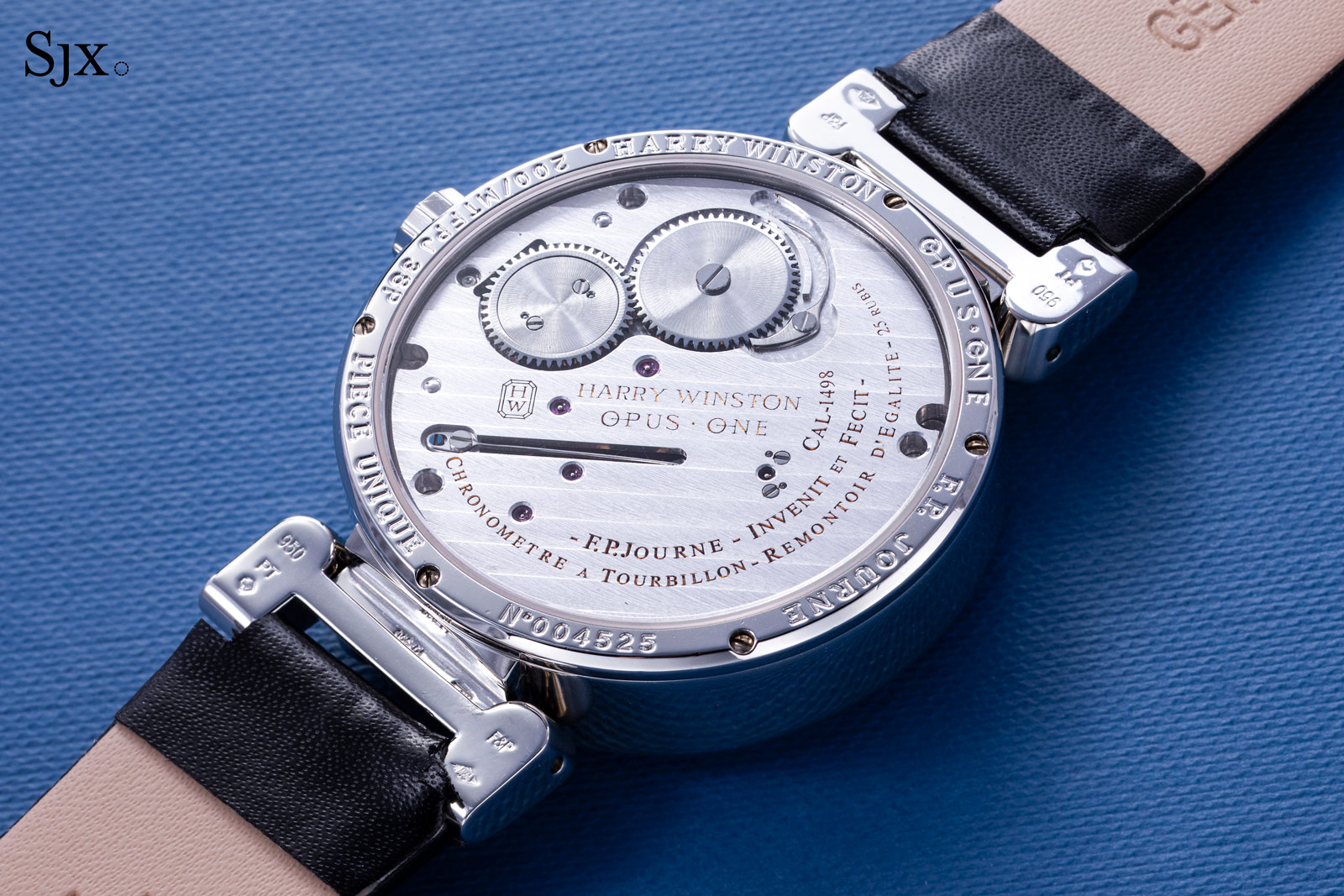 That leaves the Opus 1 feeling undervalued, but the value is likely because the watch falls into a twilight zone of being neither an F.P. Journe nor a Harry Winston, instead it’s mostly F.P. Journe with a lot of Harry Winston.

The F.P. Journe brand is certainly more desirable for a watch aficionado, while the Harry Winston name is a bit of a drag in that respect, since the jeweller is now largely a jeweller, having dialled back its efforts at serious watchmaking.

Going forward, however, the Opus 1 watches are entirely Harry Winston. F.P. Journe will not service them – this was confirmed by the brand several years ago – so they can only be serviced by Harry Winston. The reason for this due in part to a long-ago legal tussle between Mr Journe and Swatch Group, which owns Harry Winston. Mr Journe unsuccessfully sued Jaquet Droz, also owned by Swatch Group, for allegedly copying his dial designs.

In practical terms, that means nothing. The quality and technical competence of servicing at Harry Winston is unquestionably excellent, albeit at a price, and they do a fine job repairing even the most complex of the Opus series, like the Opus 3.

Still, the US$500,000 achieved by the turquoise-dial Opus 1 is a meaningful sum, indicating that some enthusiasts recognise the intriguing nature of the Opus 1. At the same time, it is likely this example will sell for more, because the pink dial is more striking than the dark turquoise dial of the watch that sold last month.

The distinguish feature of the Opus 1 – and nearly all Harry Winston watches – is its pivoted lugs connected to a tri-fluted mounting on the case band.

Surprisingly massive for a relatively small watch, the lugs are chunky by design – they are modelled on the stone arch above the doorway to Harry Winston’s historical store on Fifth Avenue in New York City. 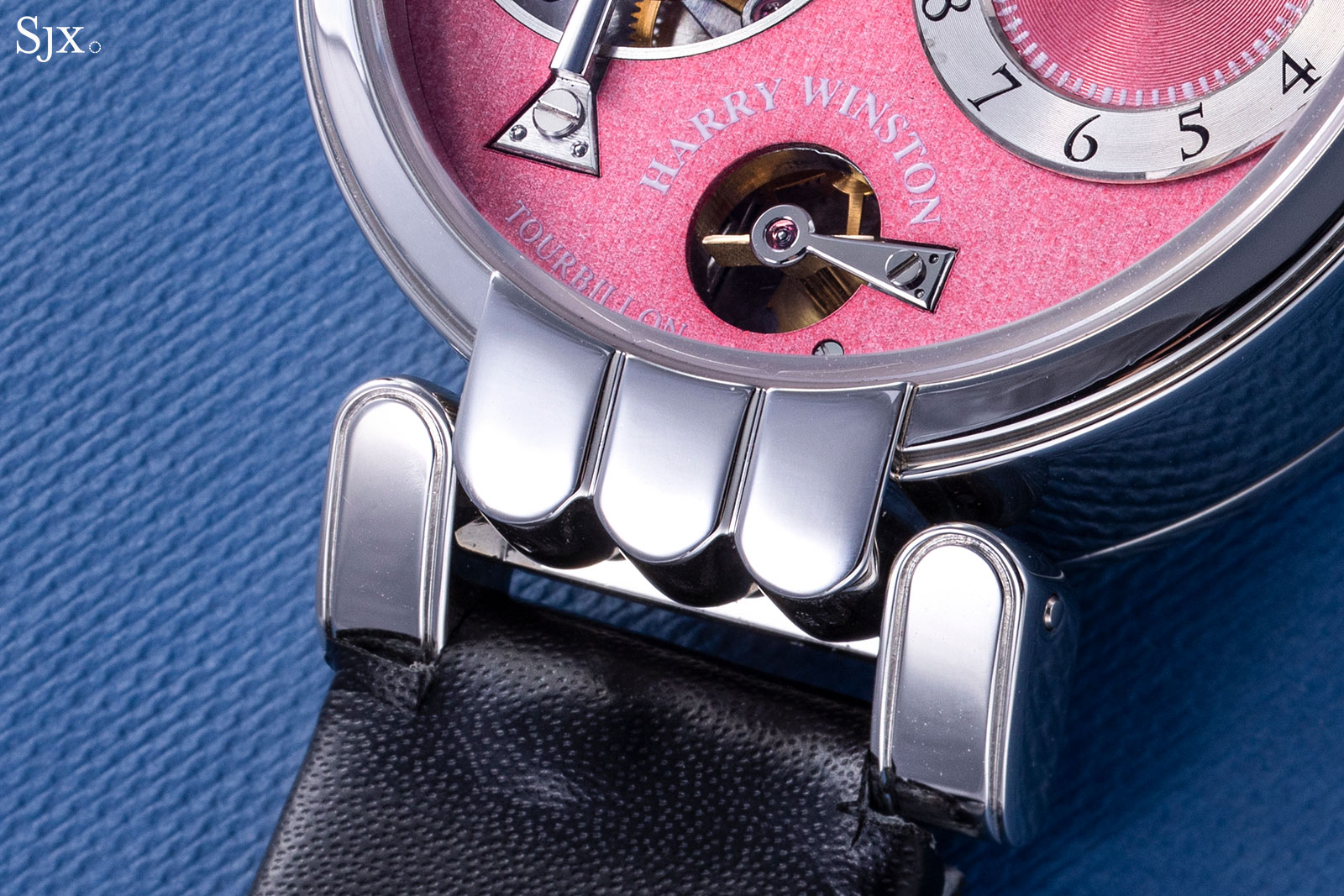 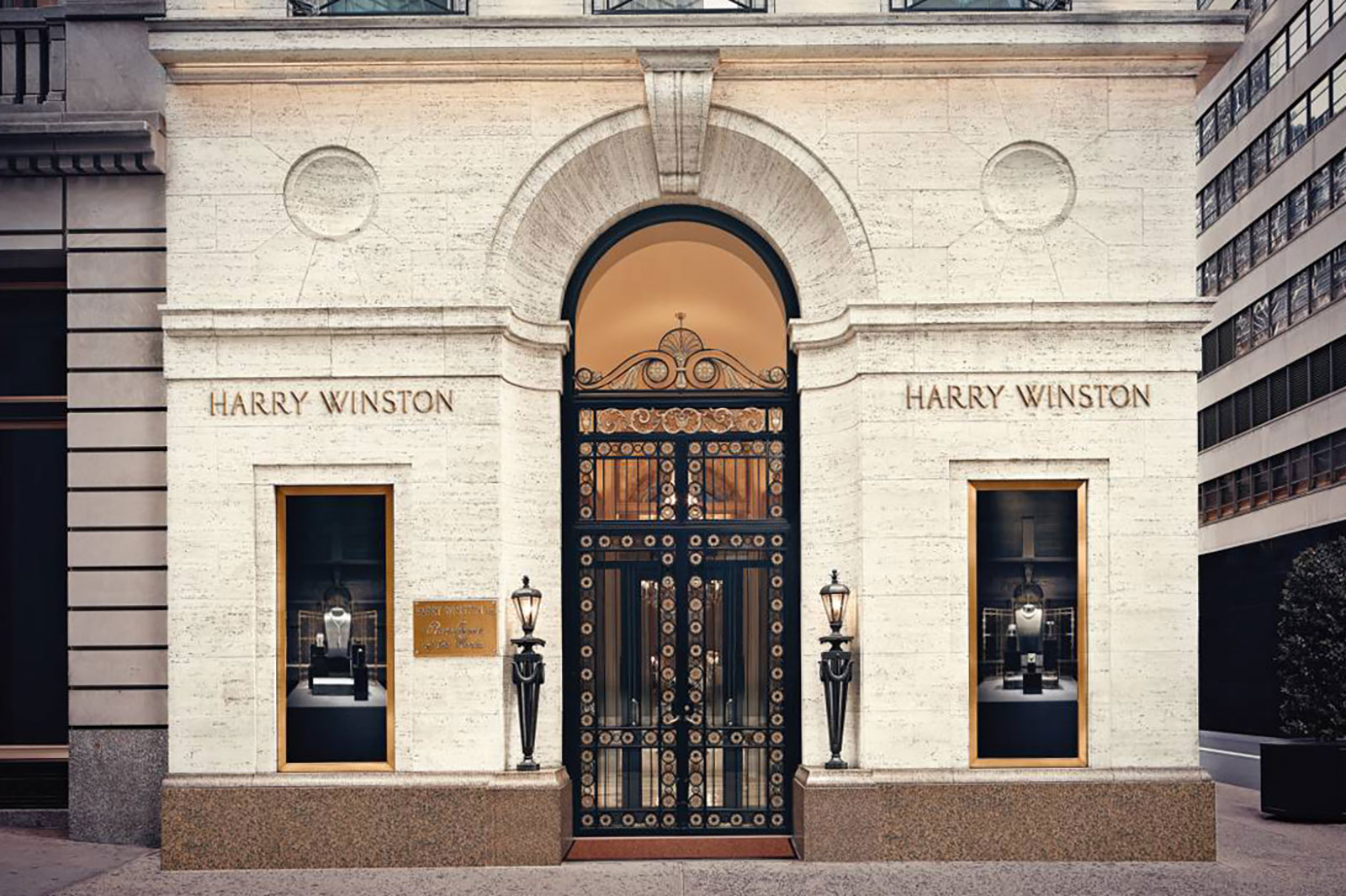 The lugs give the watch a solid feel that’s magnified by the thickness of the case, which is about a fifth taller than that of the equivalent F.P. Journe tourbillon. The Opus 1 is 12 mm high, while the F.P. Journe is 9.9 mm.

While 2 mm doesn’t sound like much, it’s substantial relative to the case height. As a result, the dial sits fairly deep into the case, as evidenced by the vertical walls on the inside of the bezel.

It feels like a great deal of unused vertical space. The height appears to have been a purely aesthetic choice that was made to preserve the typical, cylindrical Harry Winston case proportions and the large lugs. 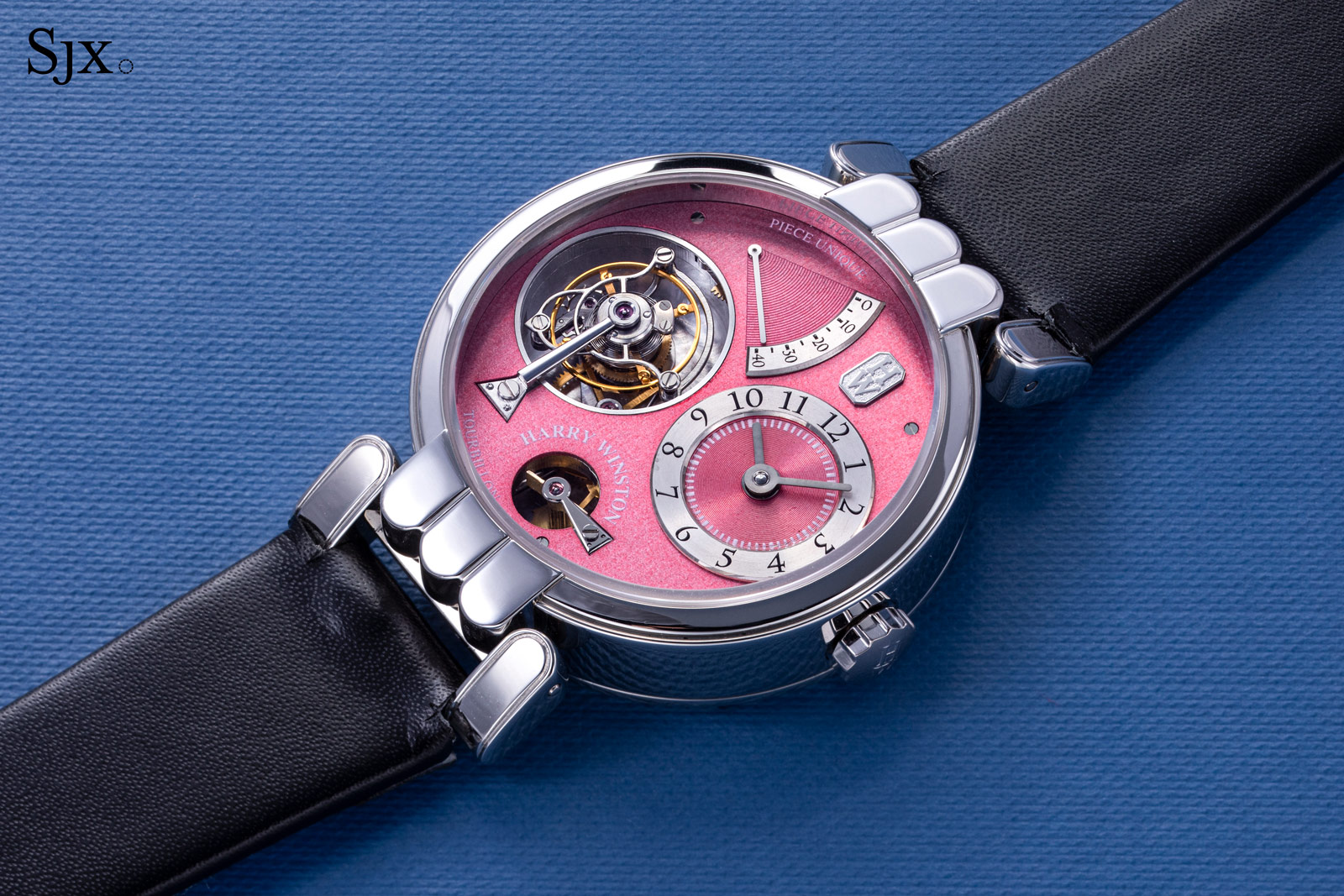 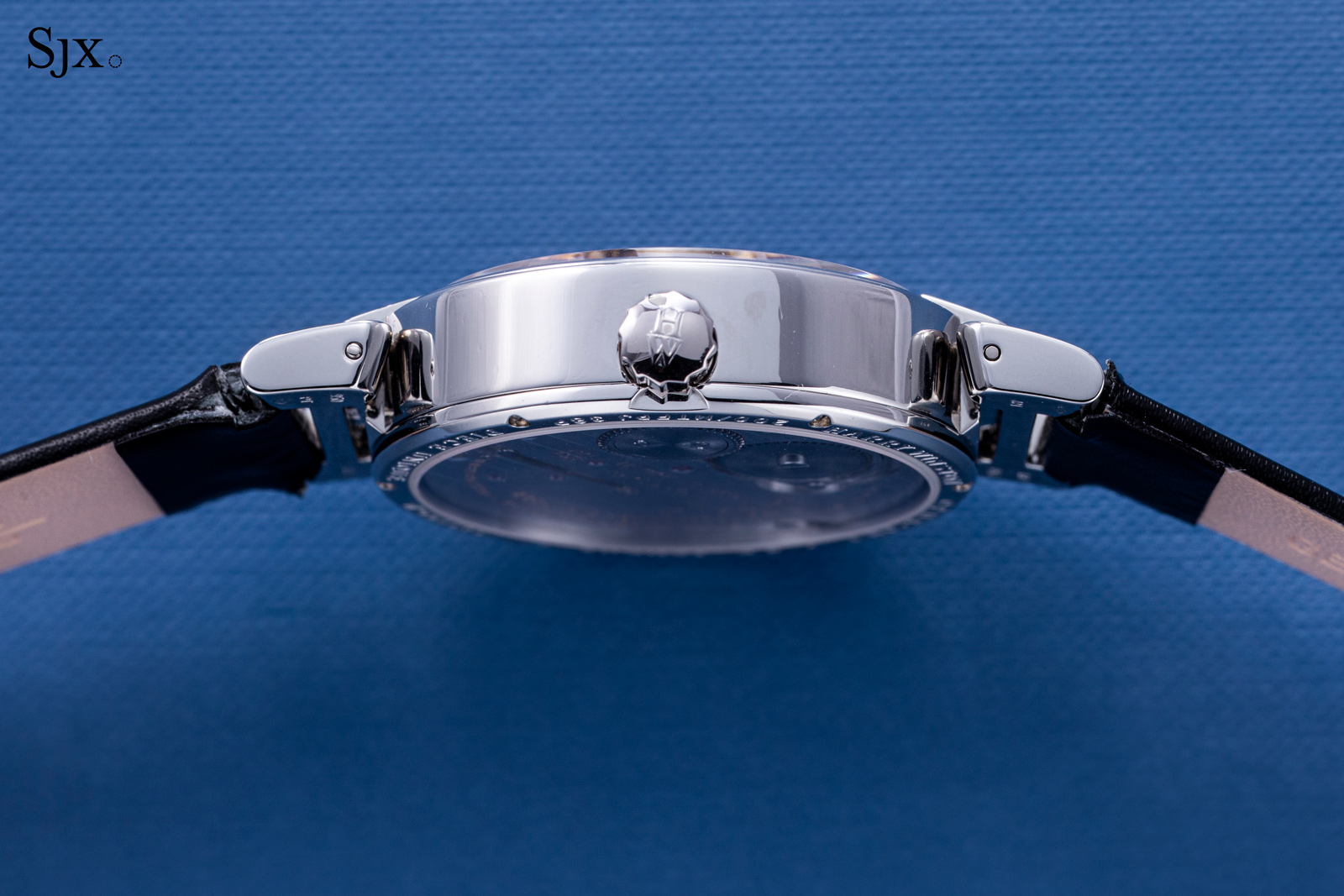 Every example of the Opus 1 was bestowed a different dial, making the face a key feature of the watch. The Opus 1 tourbillon was made in six dial colours – dark blue, black, silver, grey, turquoise, and pink – with the first two having diamond-set cases.

All Opus 1 models had exactly the same dial configuration as the equivalent F.P. Journe model since the movements were shared, but the Opus 1 looks like a wholly separate watch.

As with many early F.P. Journe watches, the Opus 1 dials have a varied colour and texture that indicate they were finish by hand. 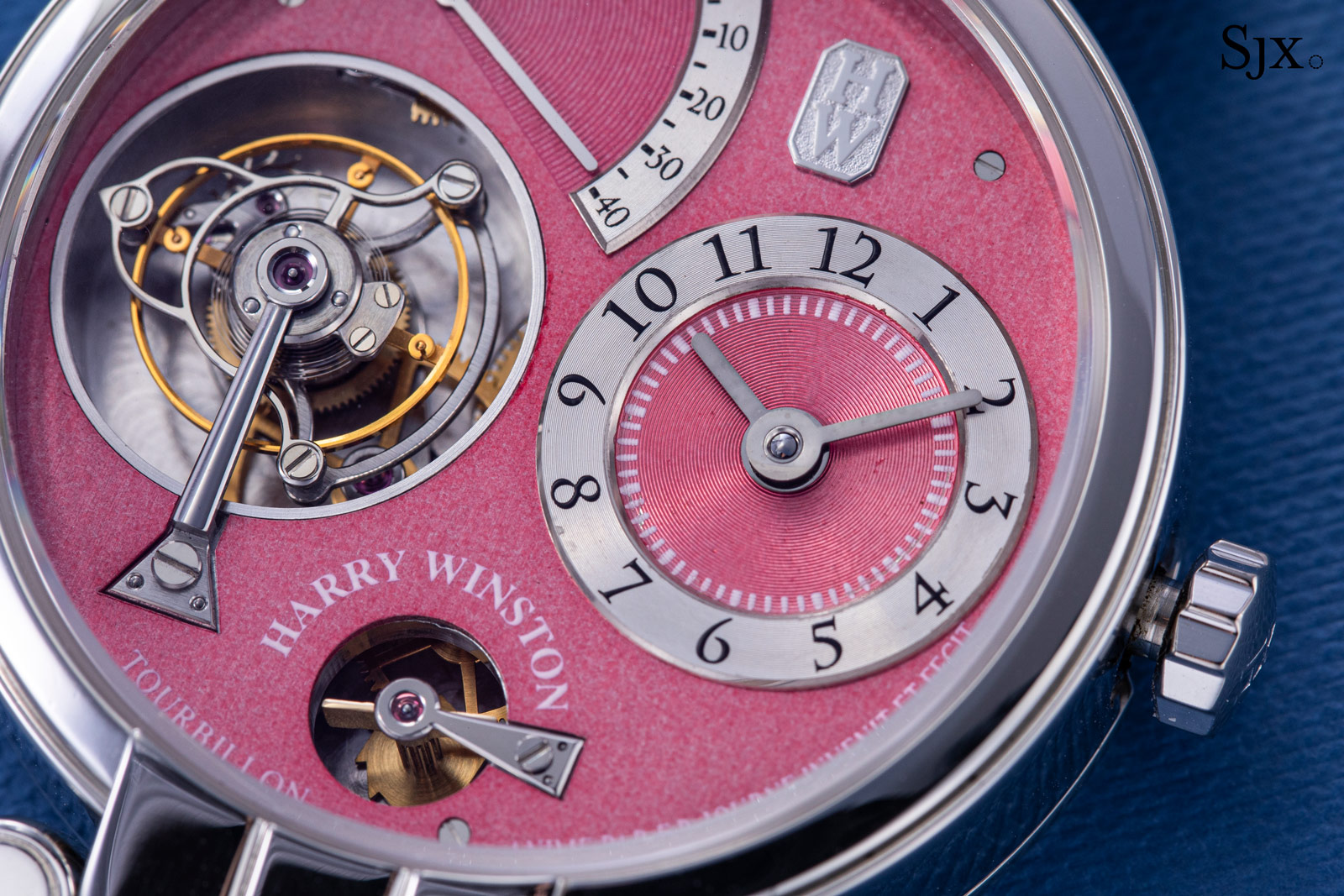 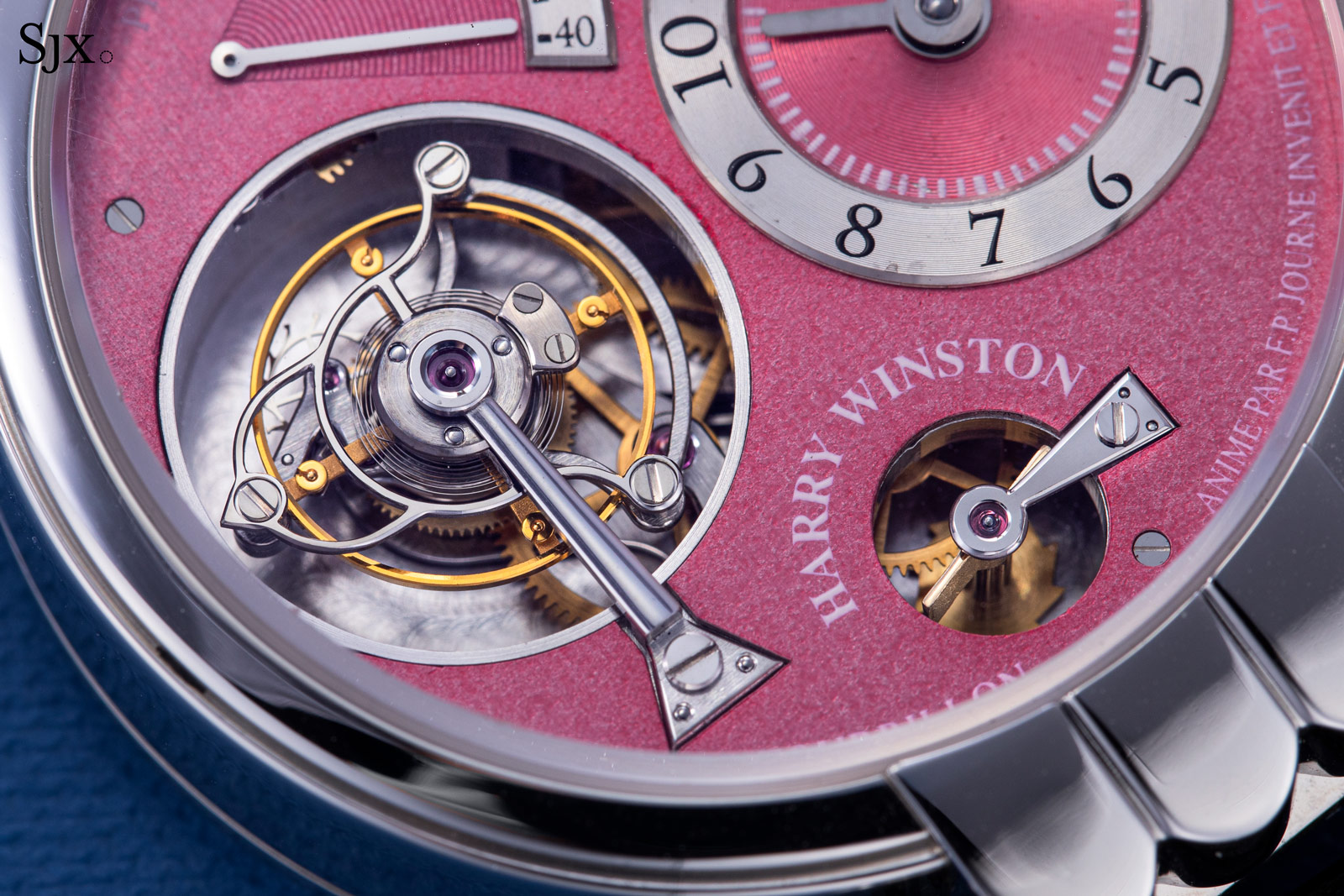 Although its layout is the same as on F.P. Journe tourbillon, the dial details are quite different. The chapter ring for the hour and power reserve indicator are both applied. Featuring bevelled edges, the applied scales sit quite high above the dial surface.

And the Opus 1 relies on hands that are flat like those used in F.P. Journe watches, but they are a plain baton shape, leaving them looking uninspired. 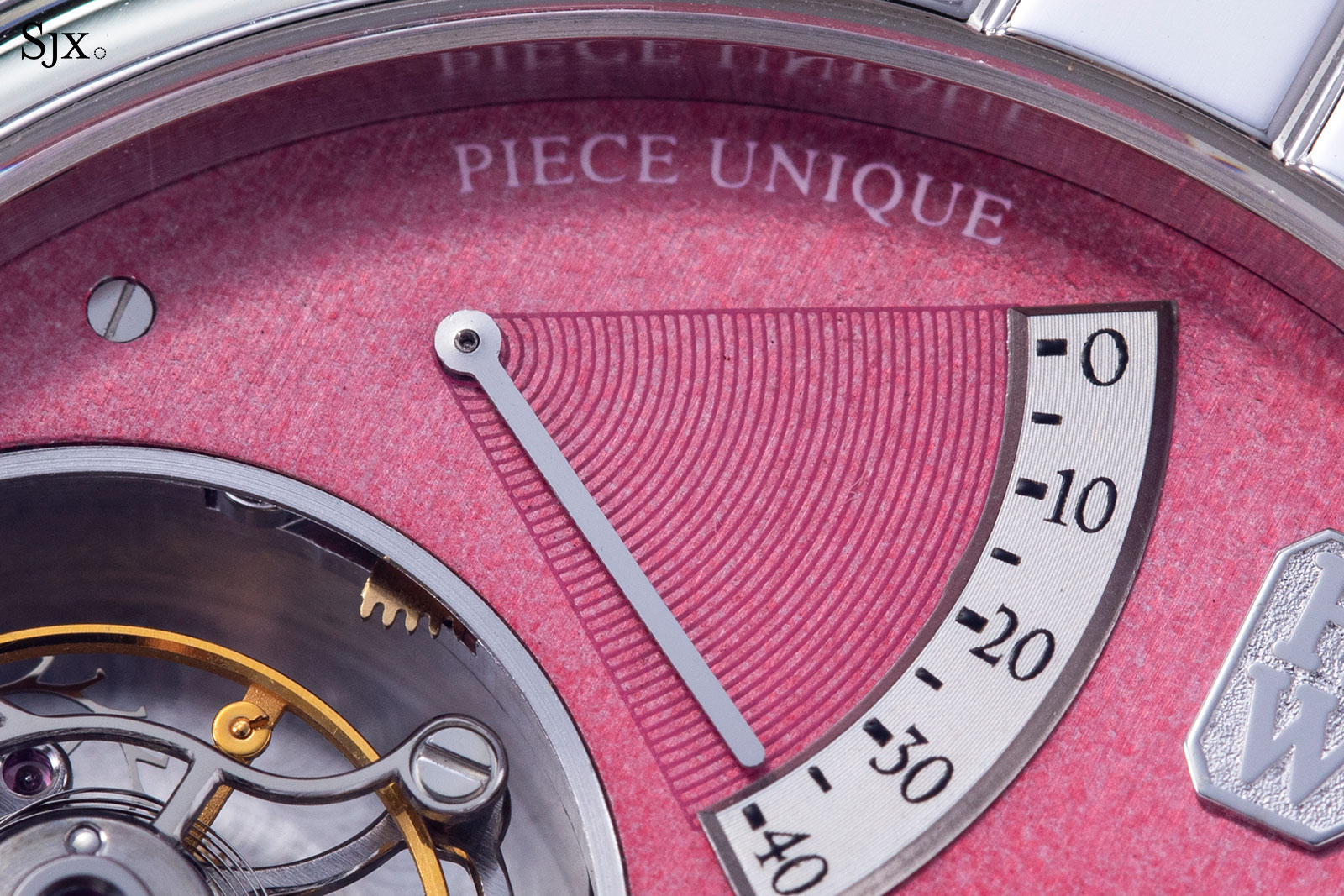 Inside the Opus 1 is the F.P. Journe cal. 1498, exactly the same movement found in the Tourbillon Remontoir d’Egalite.

The movement is alike in nearly every detail, right down to the Geneva stripes that are parallel to the aperture for the constant force blade spring. 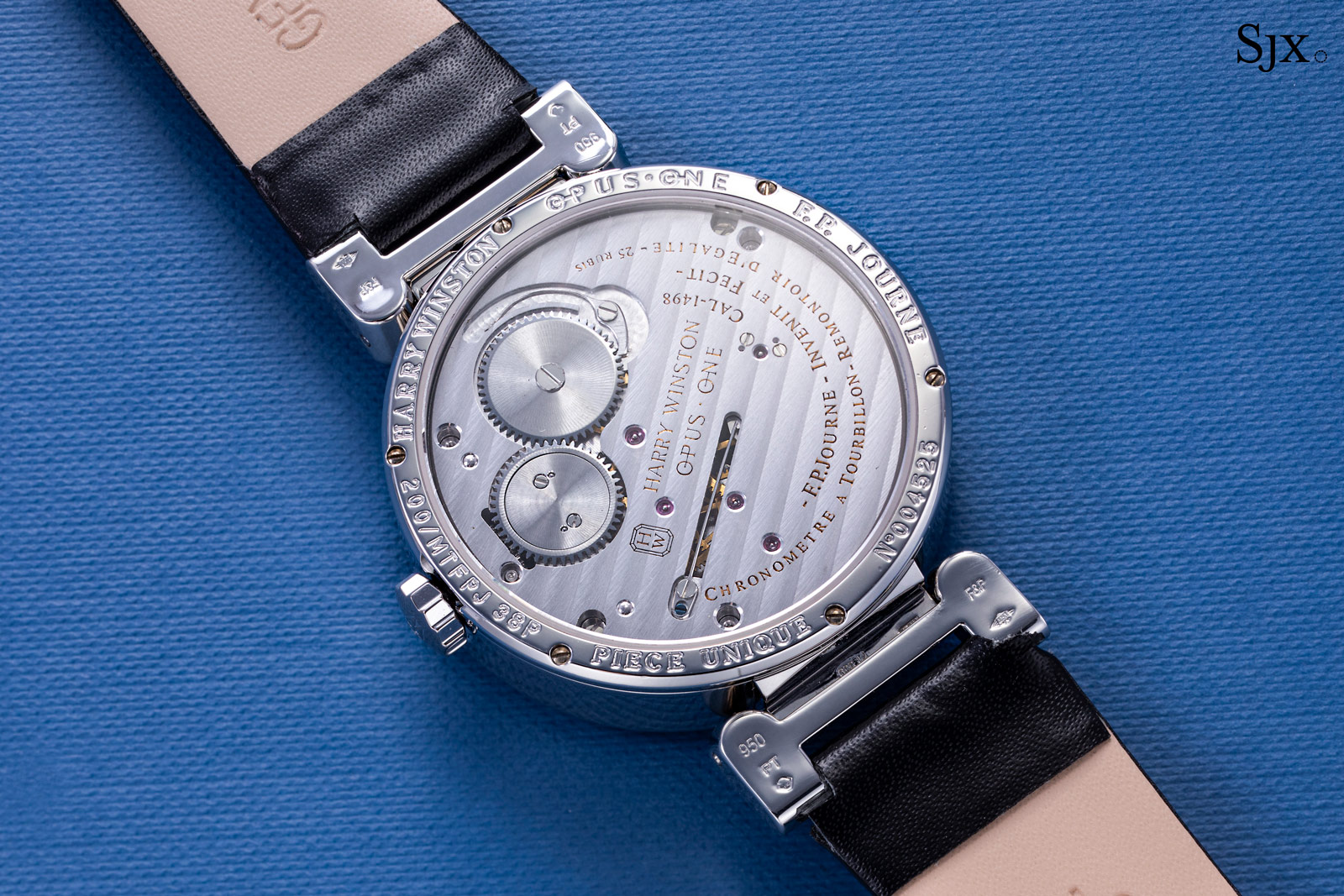 Instantly recognisable as the cal. 1498 The crown and barrel ratchet wheels, along with the winding click

The only detail that sets apart the Opus 1 is the Harry Winston branding and model name.

But they are engraved on a spot that is conveniently empty on the original F.P. Journe movement, which implies was added on subsequently to bridges that were already completed.

Like many watchmaking projects of that era – before independent watchmaking was a fad – the Opus 1 surely the result of some improvisation, and this engraving is no doubt an example of that. 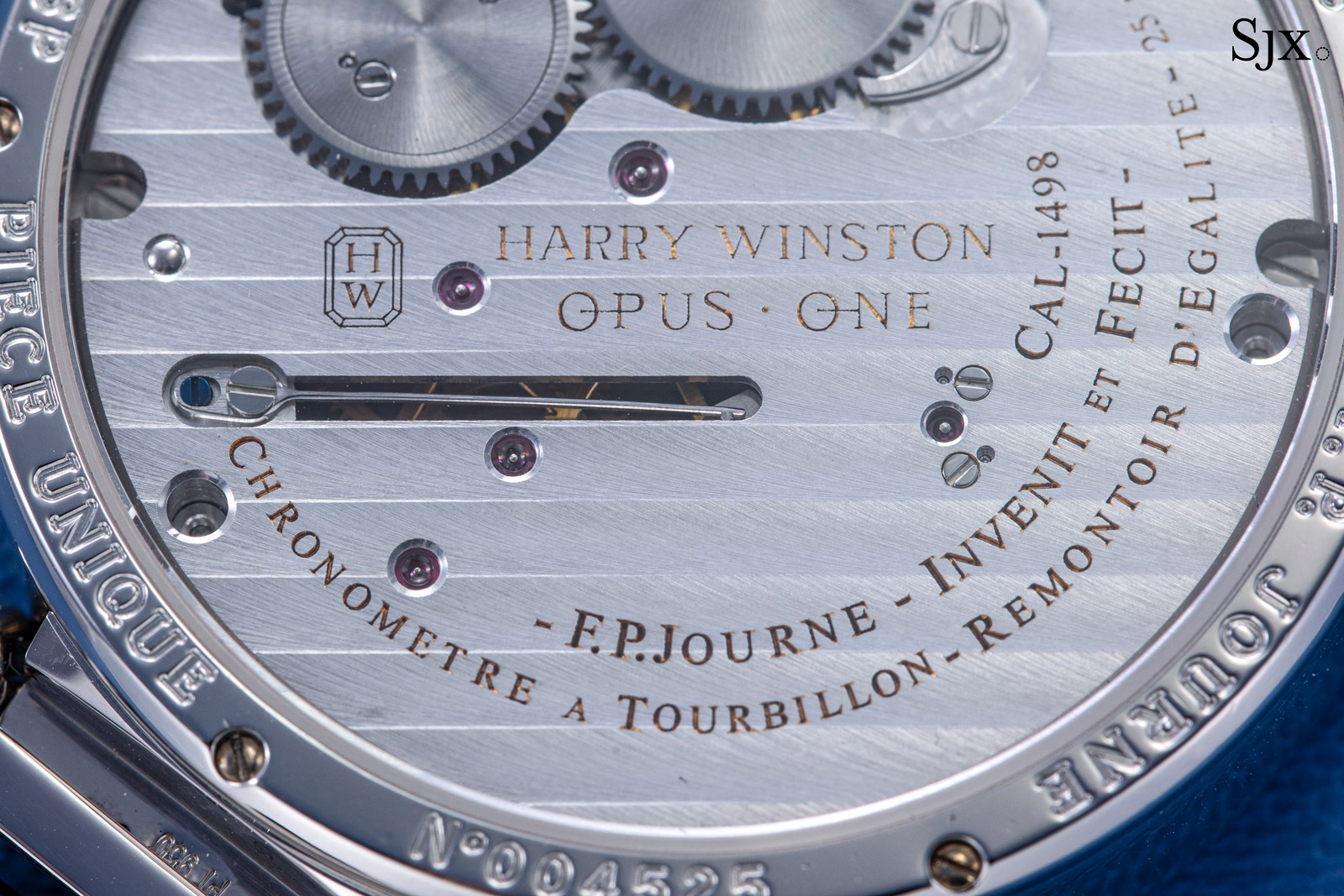 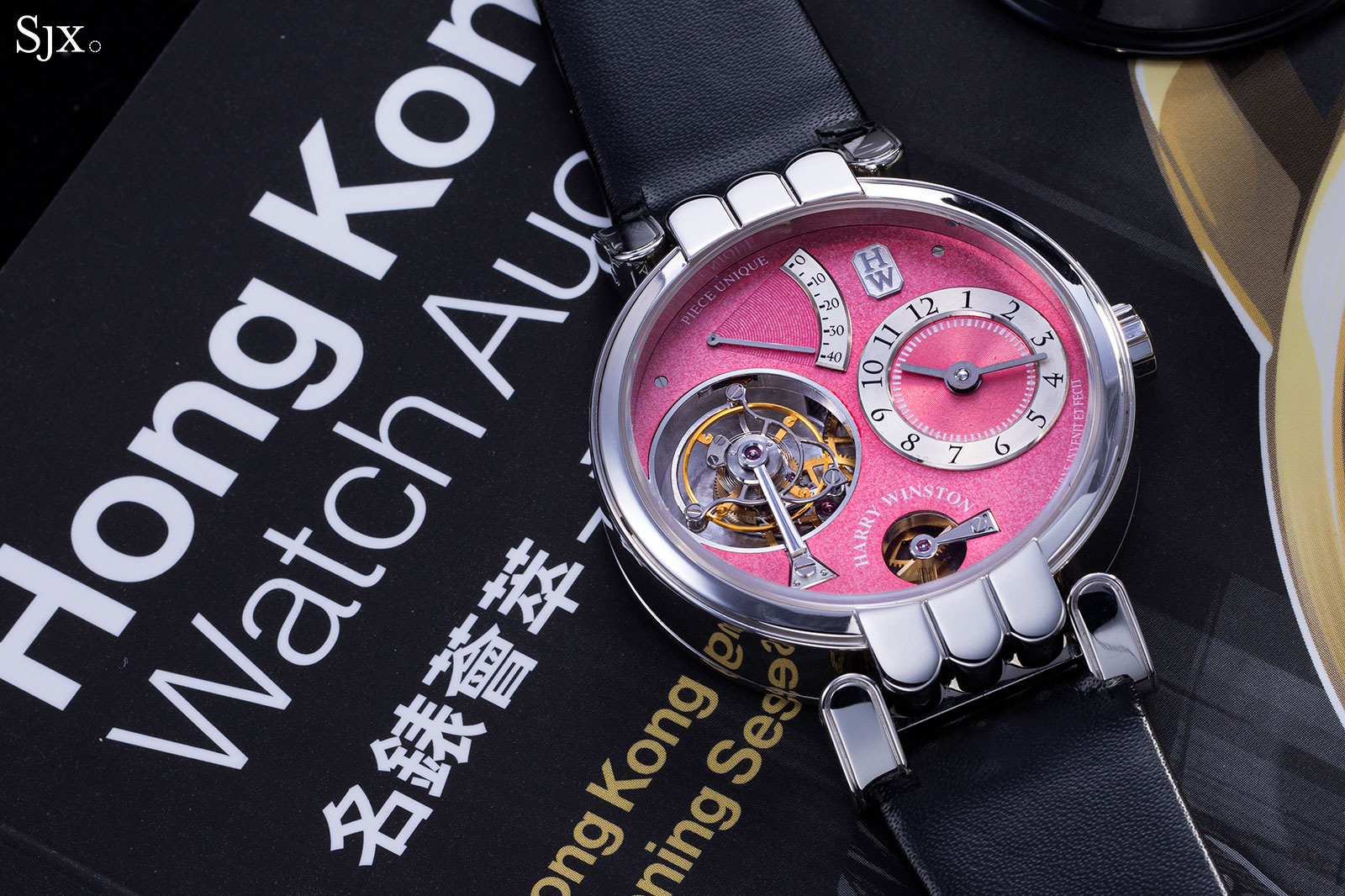