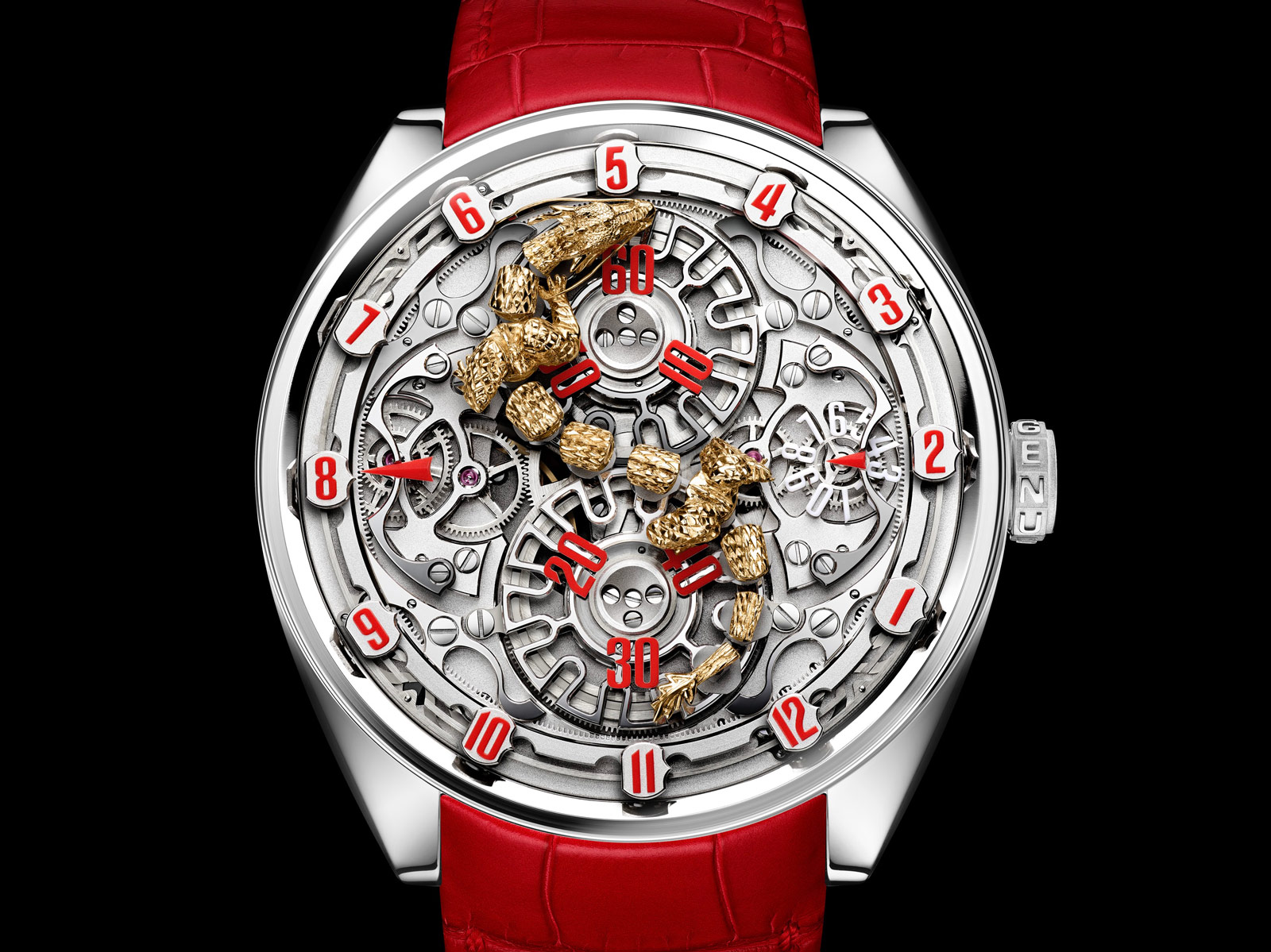 A young company founded just two years ago, Genus is all about exotic expressions of time. Though the brand is young, Genus cofounder Sébastien Billières is an industry veteran, having established a workshop that specialises in producing complicated movements for major brands exactly a decade ago.

The brand made its debut with the GNS1 – essentially a time-only watch made ultra complicated by virtue of its unique time display – a snaking procession of pointers travelling in a figure of eight that create a dynamic tension unlike anything else. Genus has now taken the concept further with the GNS Dragon, which layers a miniature sculpture over the original in the form of a segmented gold dragon. 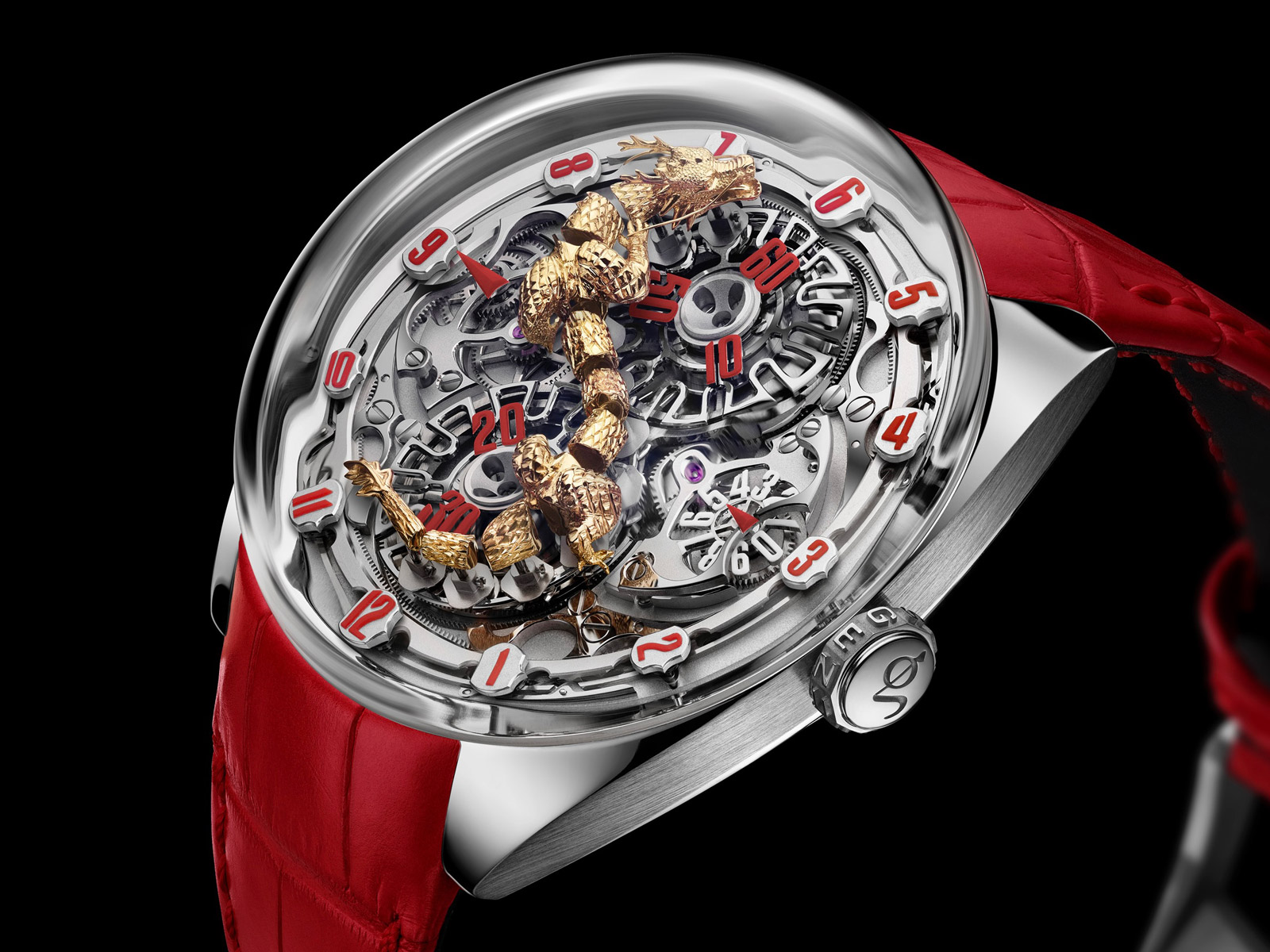 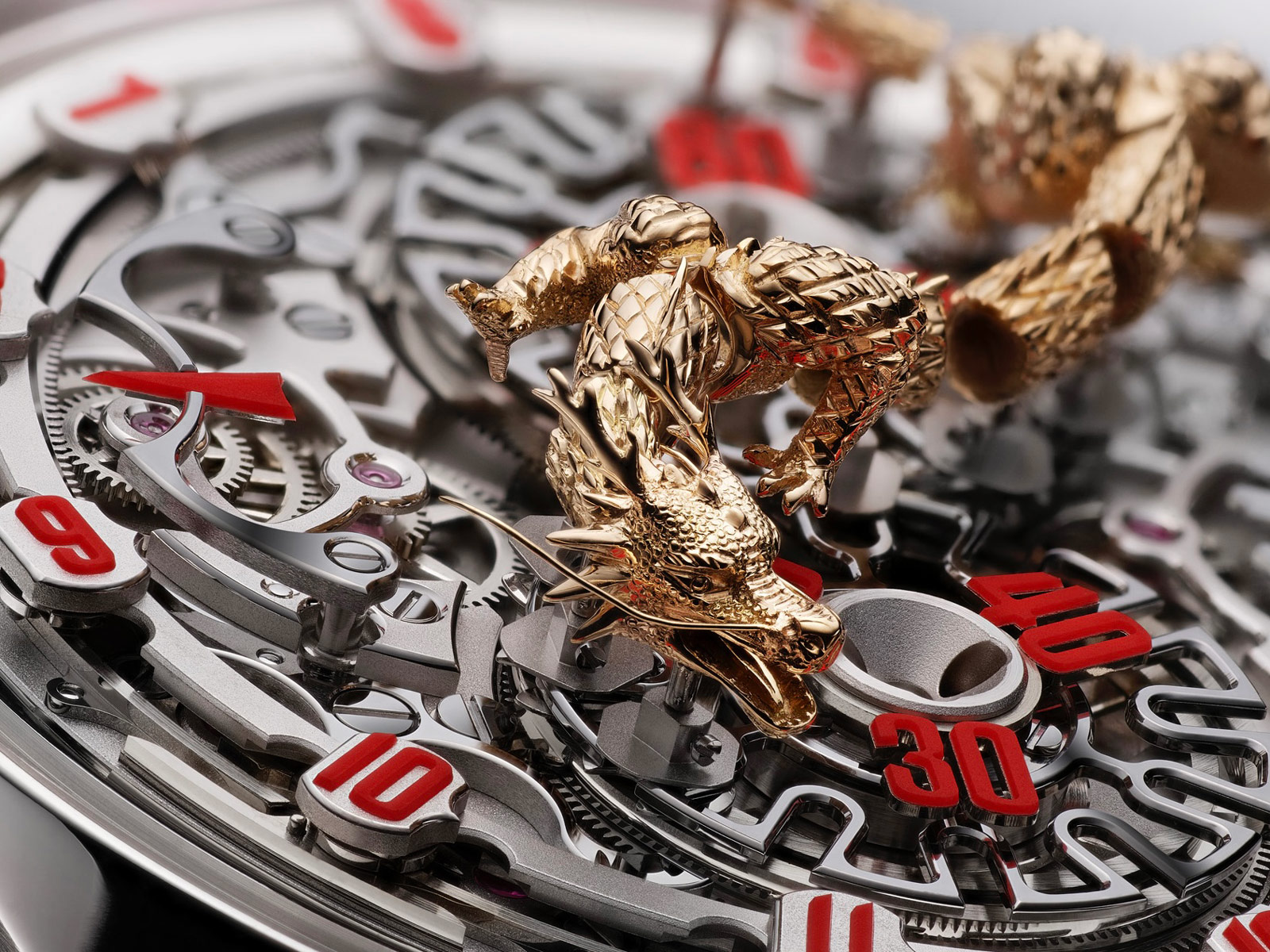 The rise of independent watchmakers with atypical time displays started two decades ago – personified by brands like Urwerk – so Genus is rather late to the game, but it still made an impressive entrance. The original GNS1 was a fresh perspective in a crowded arena, the very sort of diversity that makes this hobby fun.

And the GNS1 is a serious watch in terms of quality and construction – it also did win the Mechanical Exception award at the 2019 GPHG. While the focal point is the intriguing time display, the movement finishing is excellent; not quite artisanal haute horlogerie like Akrivia, for instance, but nevertheless done by hand and done well, particularly in the genre of avant-garde watches. 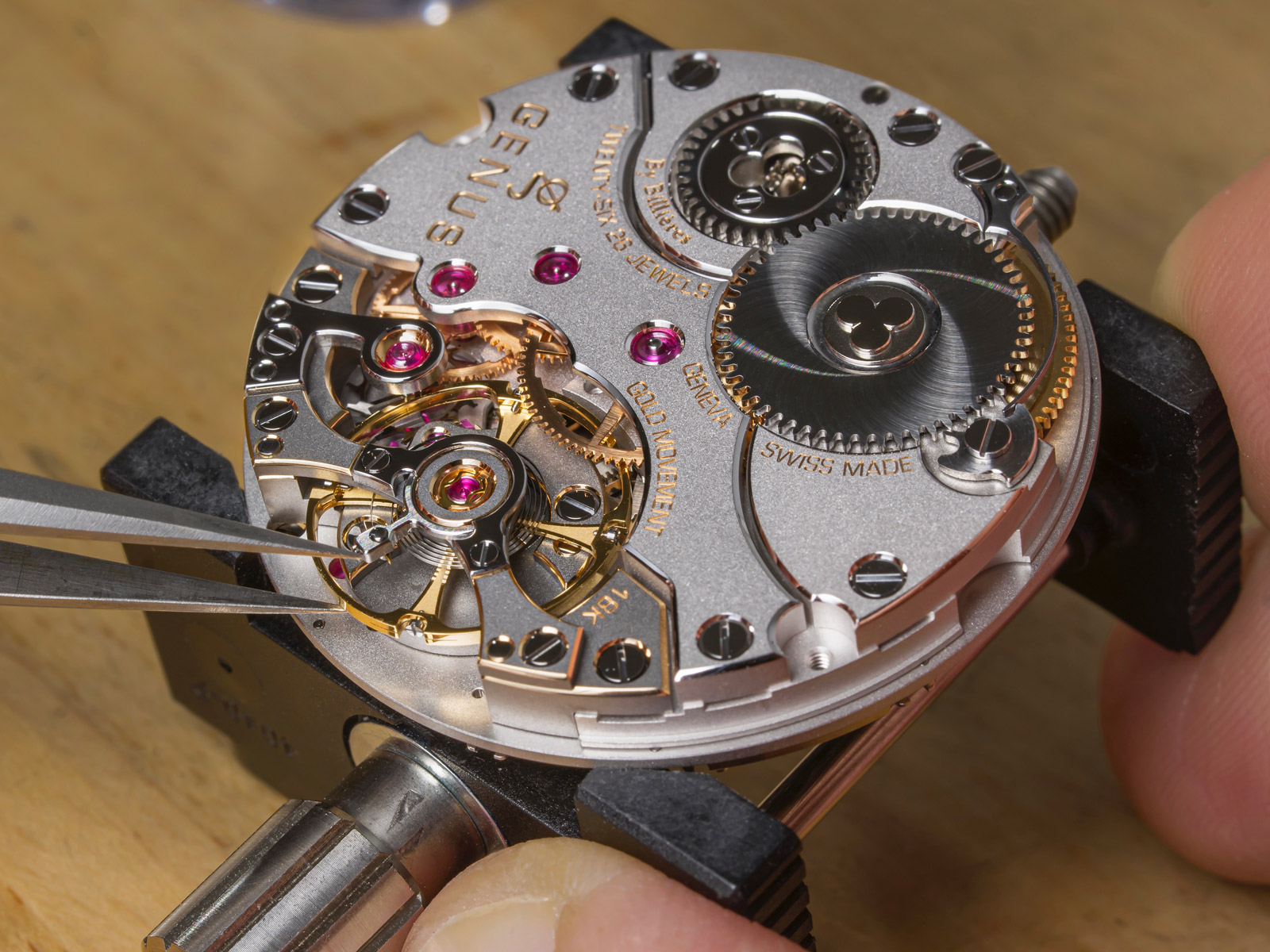 Made of solid 18k gold, the bridges have wide, polished bevels and countersinks

The highlight of the new model is, of course, the dragon. Special-edition iterations of such a watch are a given, but this is a thoughtful iteration that suits the theme and style of the complication.

Crafted from solid gold, the dragon adds significant dimensionality to the dial, and unlike most decorative elements, adds to its functionality. The dragon enhances legibility, being in gold and relief, with an easy distinction between the dragon’s head from the rest of its body, making reading the minutes easier.

But the segmented appearance of the dragon is slightly jarring. The gaps between each segment of the dragon’s body are large, making it seem cut up; it unfortunately brings to mind the image of a freshly-sliced sausage.

At around US$160,000, this watch isn’t that much more than the standard GNS1, which is fair. But it is a lot relative to much else on the market. So it is very much something for the collector who finds an Urwerk too tame. 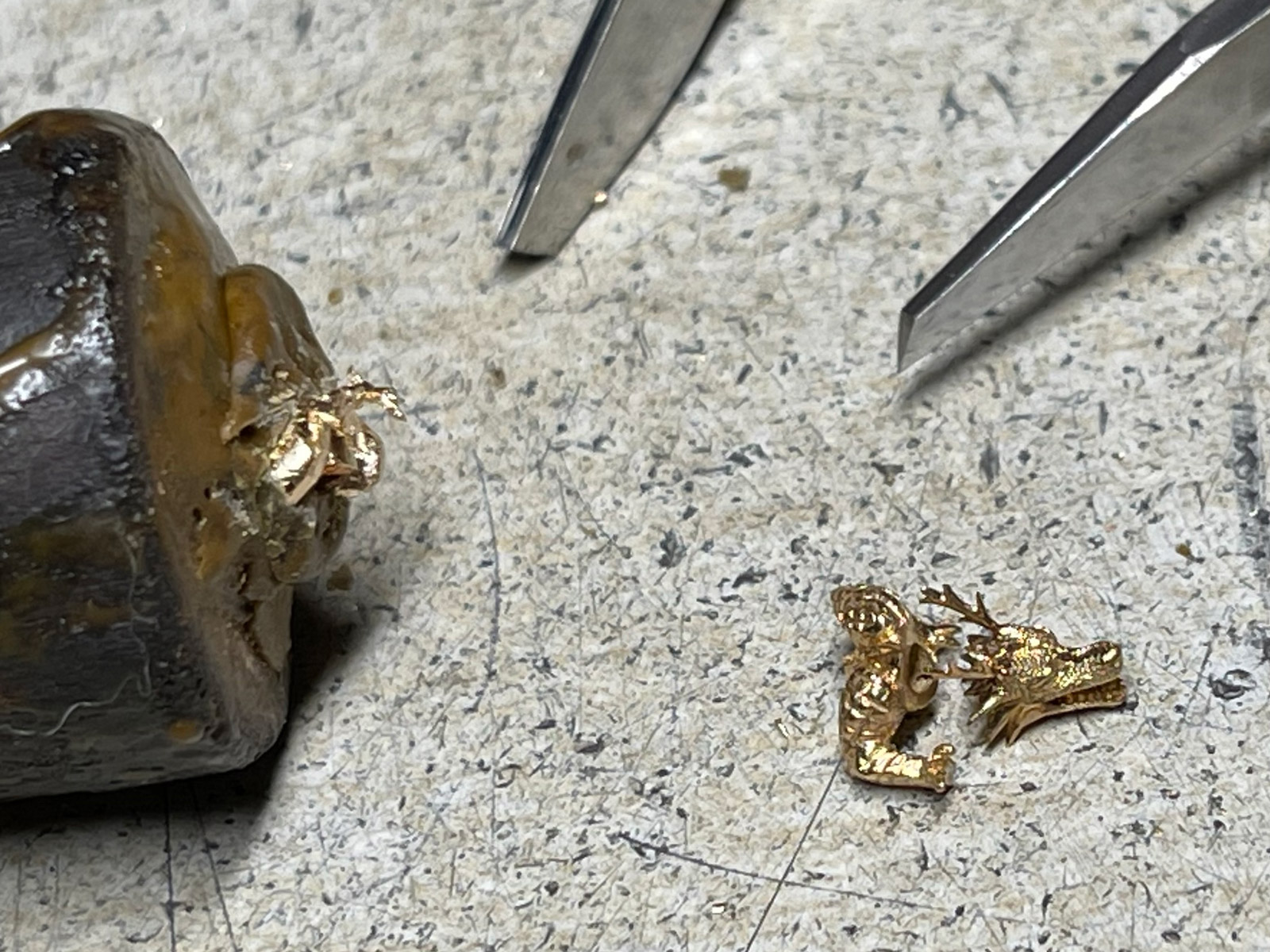 Dragon in the making

What is the time now?

The dial is exceptionally complicated – the time-display mechanism actually is that complicated – but reading the time is easy. Hours are read via the fixed red hand at nine o’clock against the slowly rotating outer hour track. Not only does the hour track make one revolution every 12 hours, each numeral is essentially a satellite, turning slowly on its own axis to keep all the hour numerals vertically aligned.

The minute display is broken up into the tens and single digits. At the centre, the tens are further separated into two circular, 30-minute segments, forming a figure-of-eight. The dragon sculpture forms a train that travels along the figure-of-eight track, with the head pointing to the tens unit of the minutes.

Like the hours, the single digits of the minutes are indicated with fixed pointer at three, with a minute wheel beneath rotating once every 10 minutes. 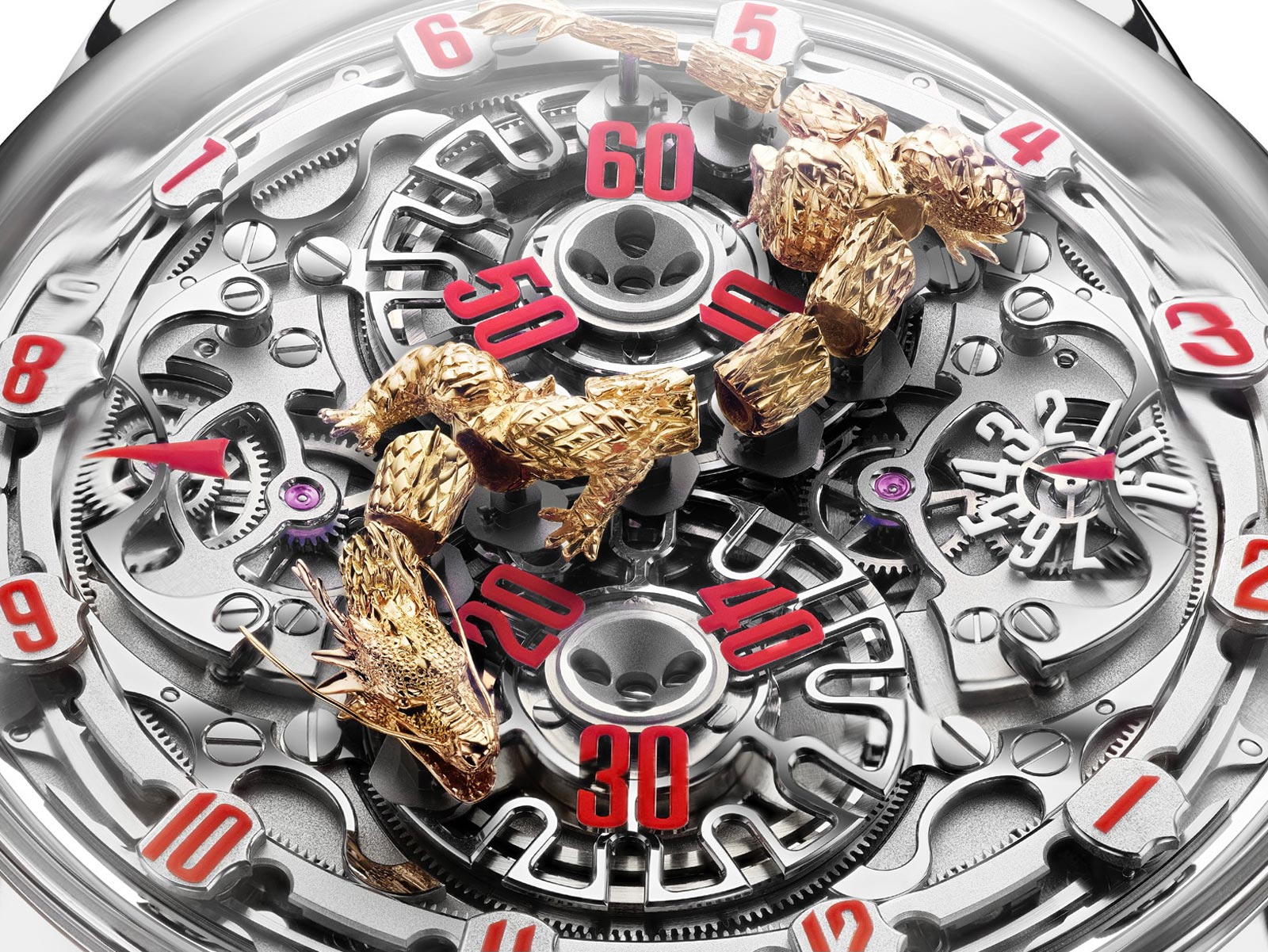