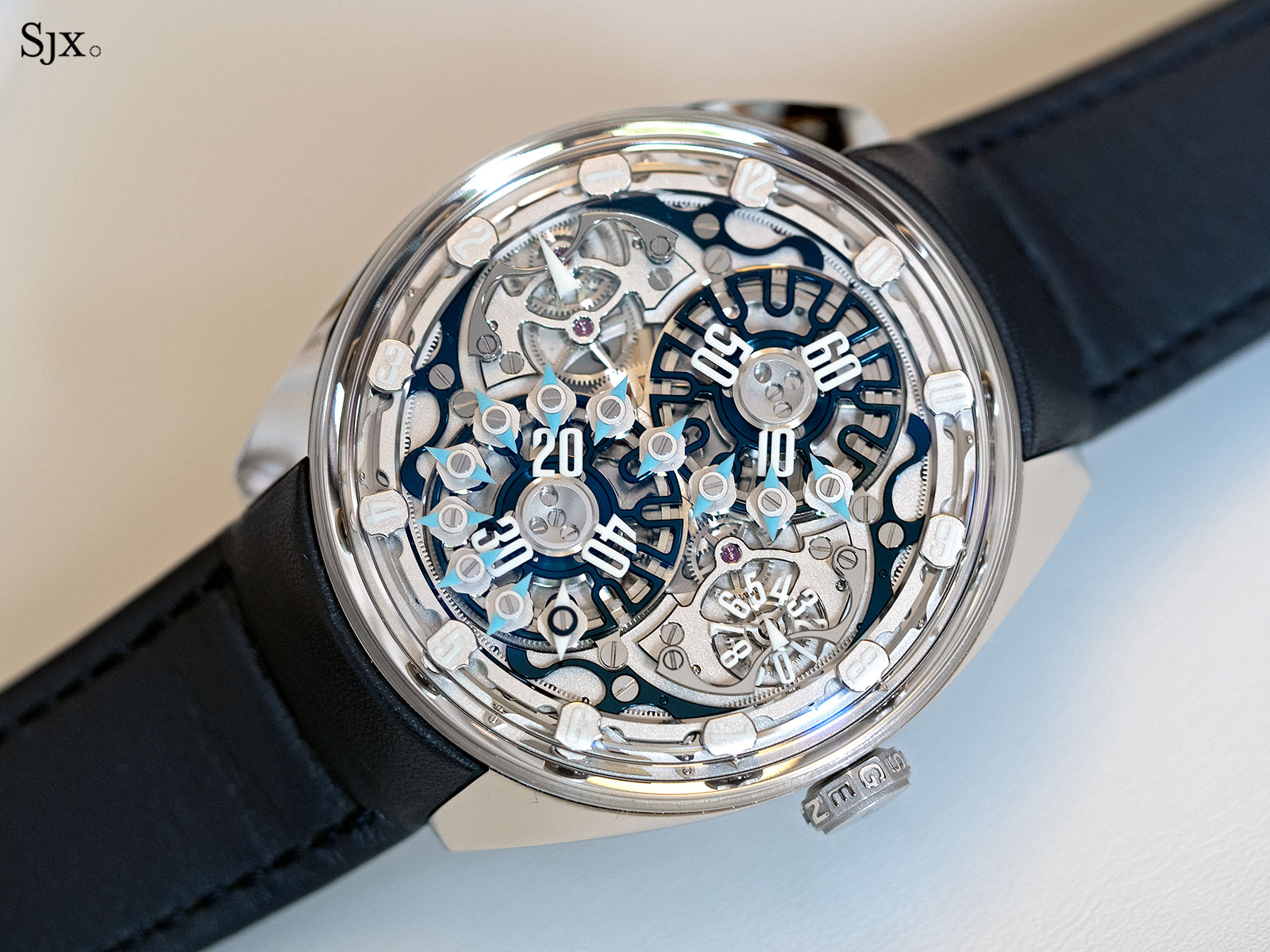 While it’s a new brand that just made its debut, Genus is founded on the watchmaking talent of an industry insider who has spent a lifetime working on complications. Its first watch is the GNS 1 that tells the time with an ultra-exotic complication with the minutes travelling across the dial like a train.

Conceptually the GNS 1 harks back to the burst of creativity that started in the early 2000s, when watchmakers went all out with imaginative complications to display the hours and minutes. This was the heyday of the Harry Winston Opus series and the birth of brands like MB&F and Urwerk. 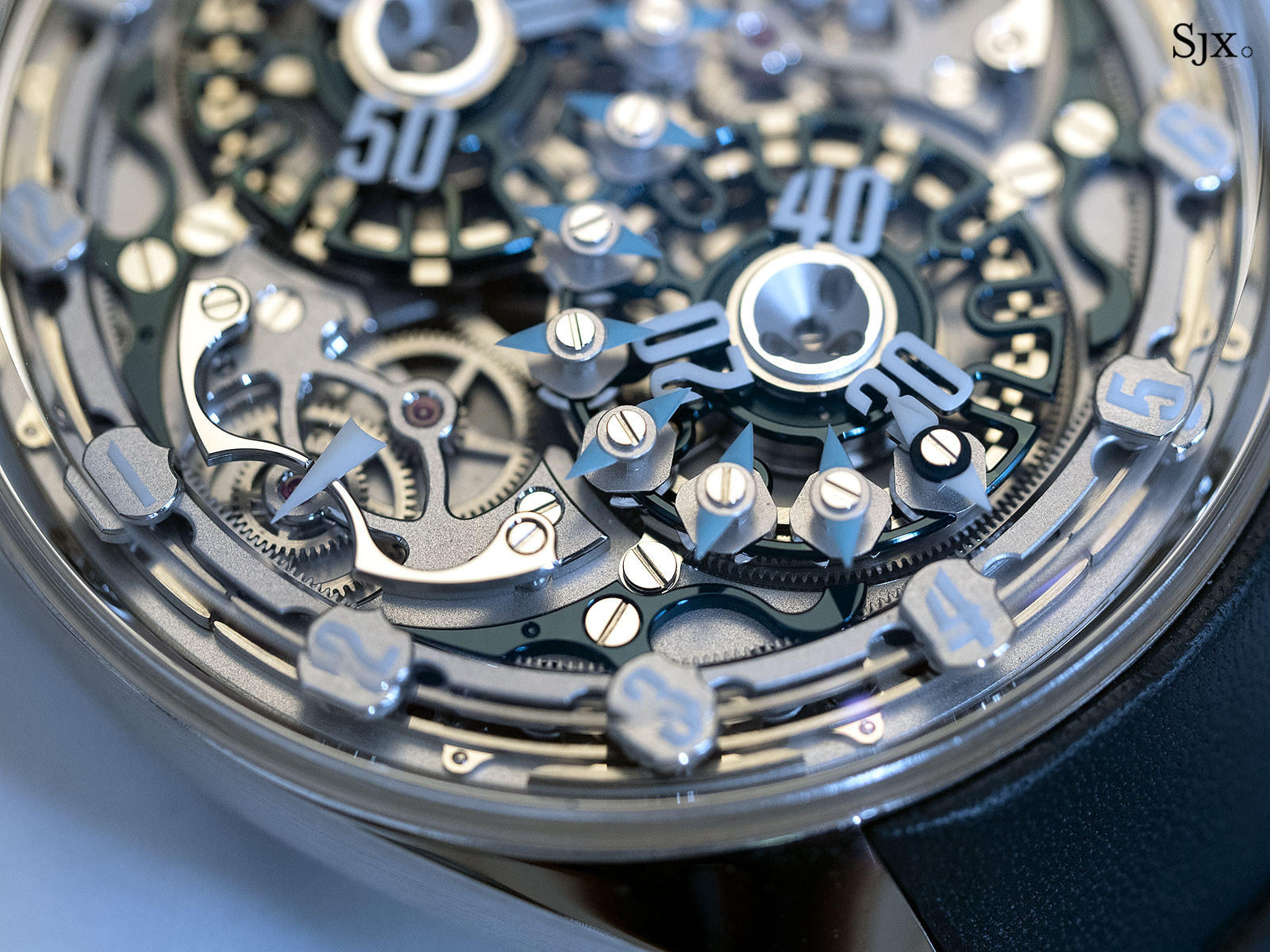 The son of a watchmaker, Mr Billières started his career at Roger Dubuis in 1999, followed by a stint at Urwerk. In 2011, he set up GMTI, which specialises in primarily in assembly and servicing of complicated movements for major watch brands.

According to Mr Billières, the GNS 1 is the realisation of his long-held ambition of creating his own watch, after spending his career doing it for others.

The GNS 1 is essentially an exceptionally avant-garde display of the hours and minutes. Even when static the face is impressively complex, and fascinating to watch in motion. But as is often the case with such watches, legibility is not the best. 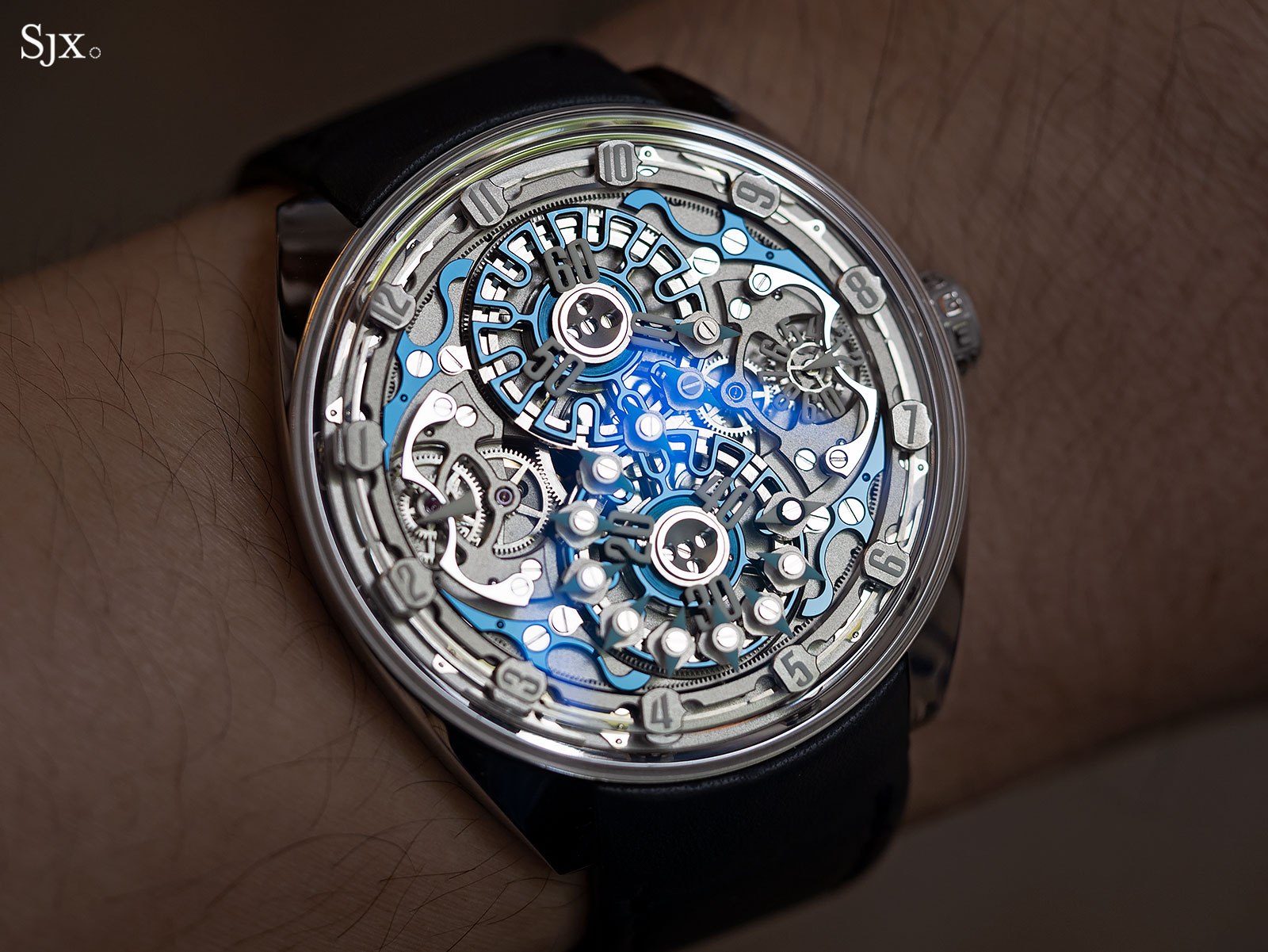 The hours are the easy bit, a fixed pointer at nine o’clock indicates the current hour, which is shown on satellite. Twelve satellites, one for each hour, make one revolution around the dial ever 12 hours. And each satellite makes a quarter rotation every three hours in order to keep the numeral aligned vertical. 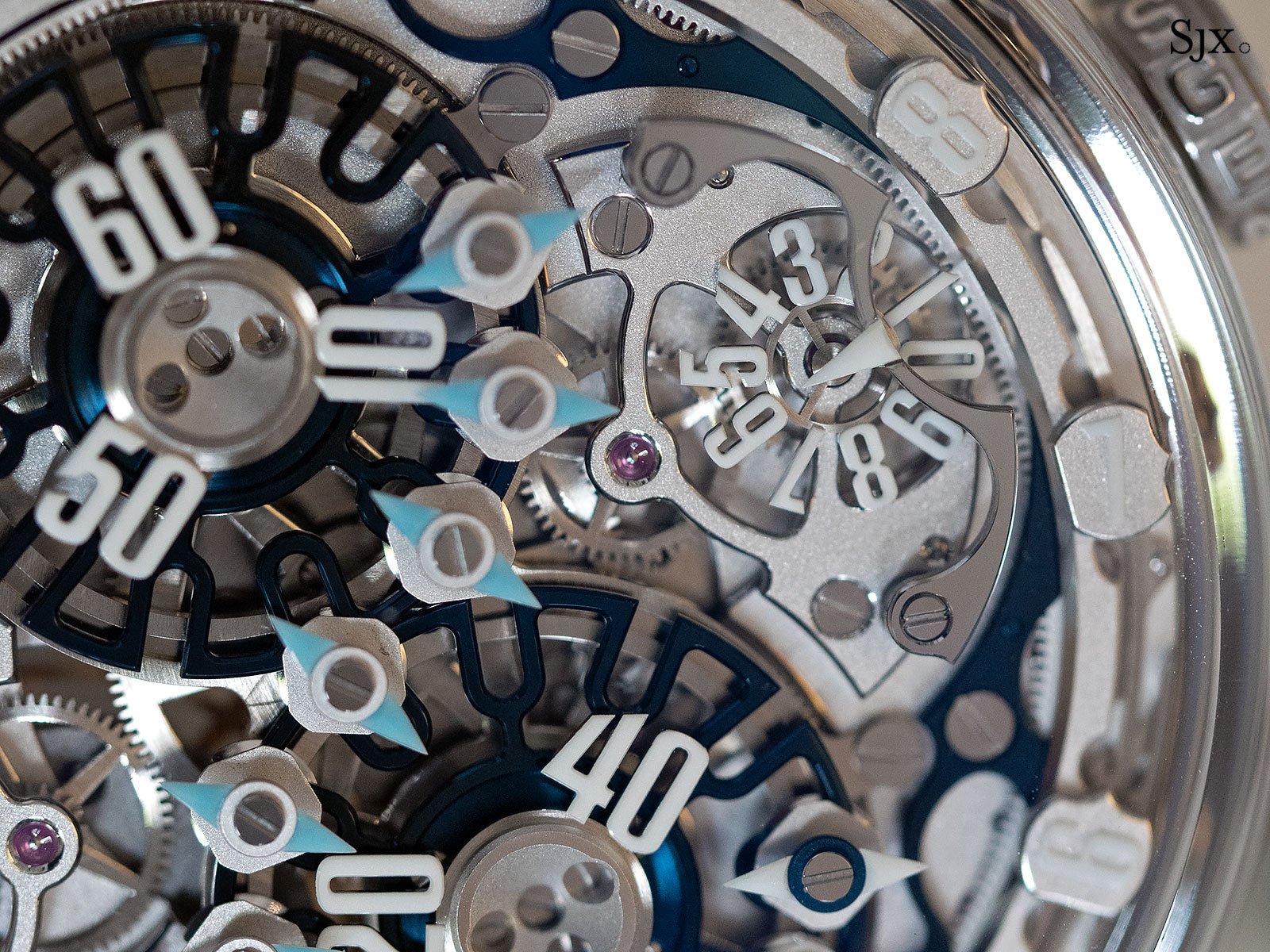 The single digits of the minutes on the extreme right

The centrepiece of the entire display is the minute display in the centre. This is made up of a travelling train of lozenge-shaped pointers, with the leading pointer indicating the minutes. The train moves along a figure of eight shaped track – which is also the symbol of infinity – with each half of the track rotating in a different direction.

As it is with other exotic time indications, the display would be incredible if it moved quickly, but that is mechanically impossible due to the energy needed.

This video illustrates exactly how it works.

The time display module on the front is complex, and made even more complex due to the intricate styling of the bridges, levers and wheels, which are designed to have lots of pointy bits and curves. 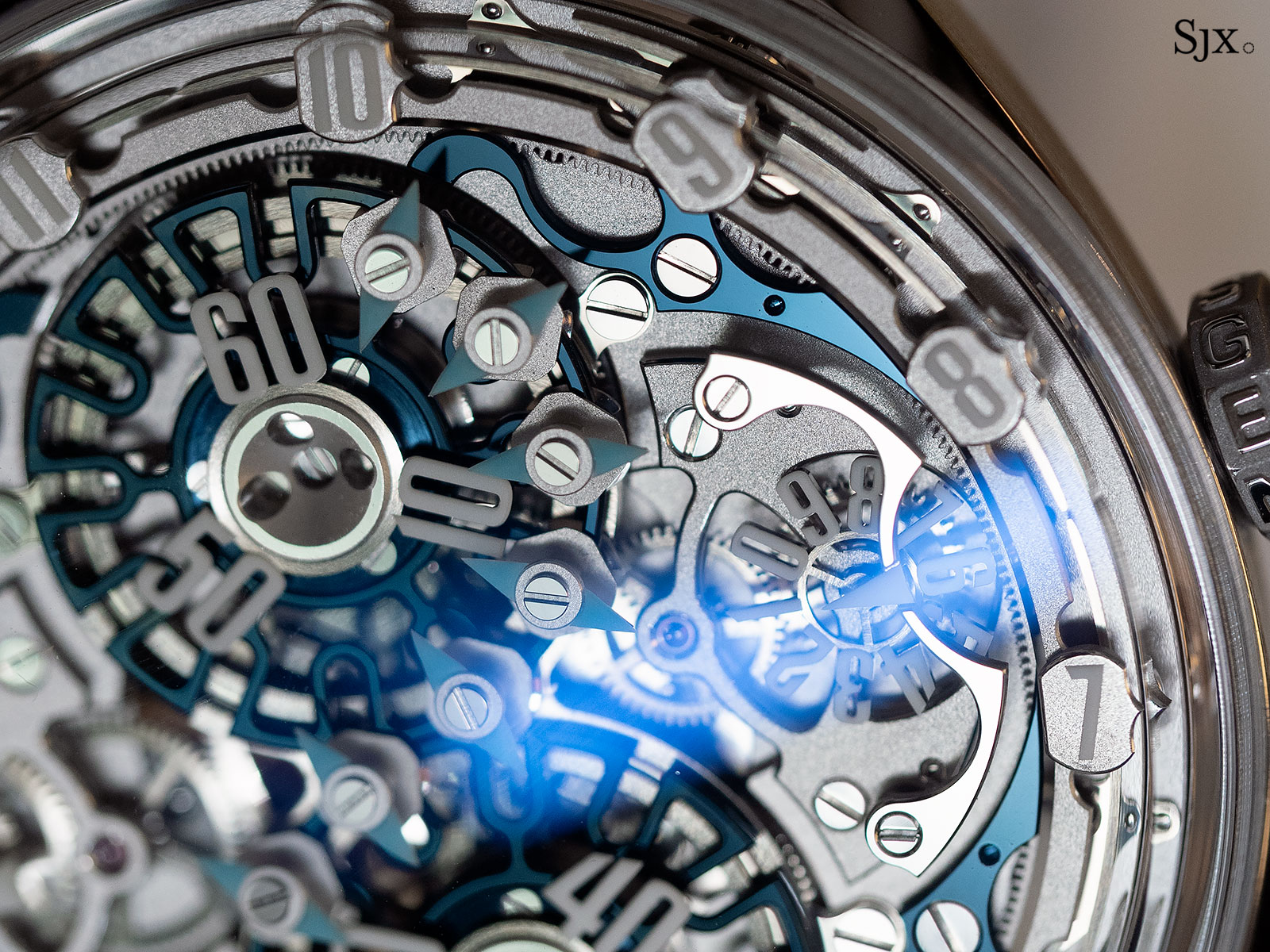 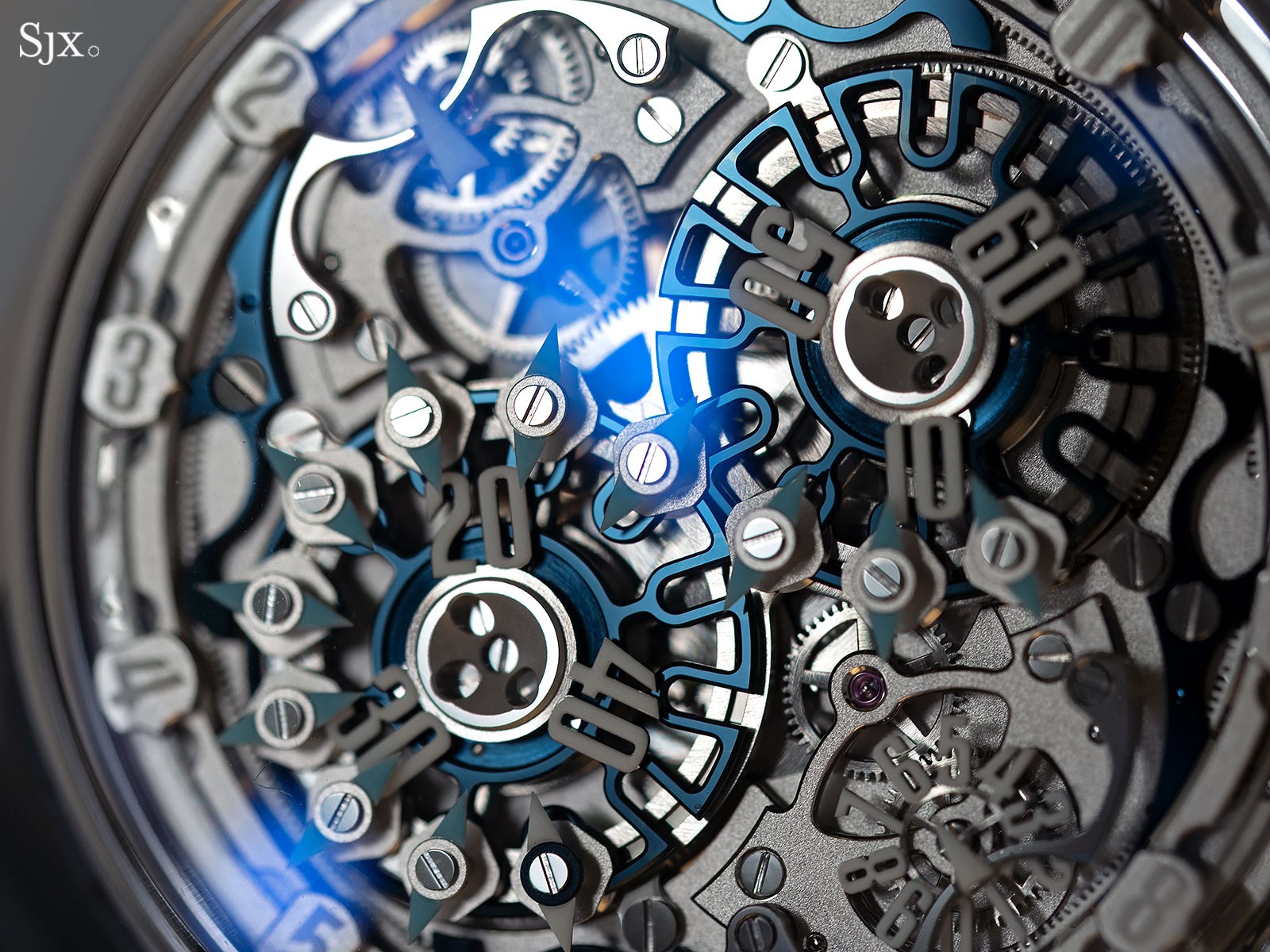 Though the visual detail overwhelms everything else, the decoration is finely executed when examined up close. In fact, the finishing is done to a higher degree than the average watch in the avant-garde segment of watchmaking.

All the bridges have frosted surfaces and contrasting, polished bevels on all edges. Each of the wheels have grained tops and chamfered spokes, while most screws and jewels sit in polished countersinks. 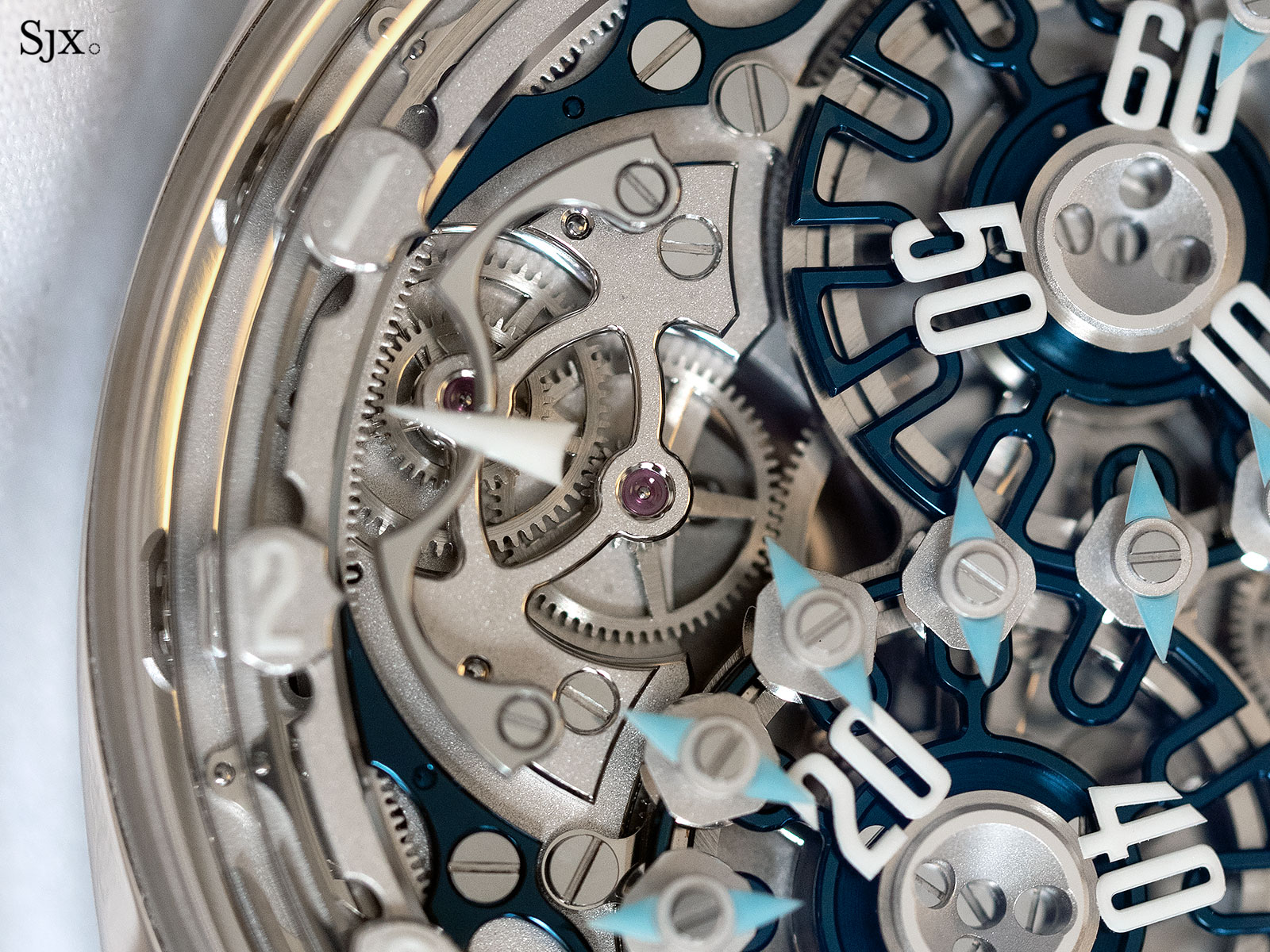 From the back the view is more traditional, with the base movement having a layout that is reminiscent of pocket watch calibres like the Unitas 6498, with a large balance wheel, and exposed crown and barrel ratchet wheels. And like many pocket watch movements, it runs at 18,000 beats per hour, or 2.5Hz. According to Mr Billières, the base movement is also an in-house creation.

Though the layout is traditional, the construction is unusual: the escapement is modular and replaceable. Top of the line H. Moser & Cie. movements include a similar feature, which allows the escapement to be swapped for a freshly lubricated and regulated module during servicing.

All of the bridges, cocks and base plate are made of 18k gold, but finished differently due to the modular escapement. So while the barrel bridge and going train bridge are rhodium-plated and frosted, the balance bridge and escape wheel cock are ruthenium-plated for a dark grey finish. 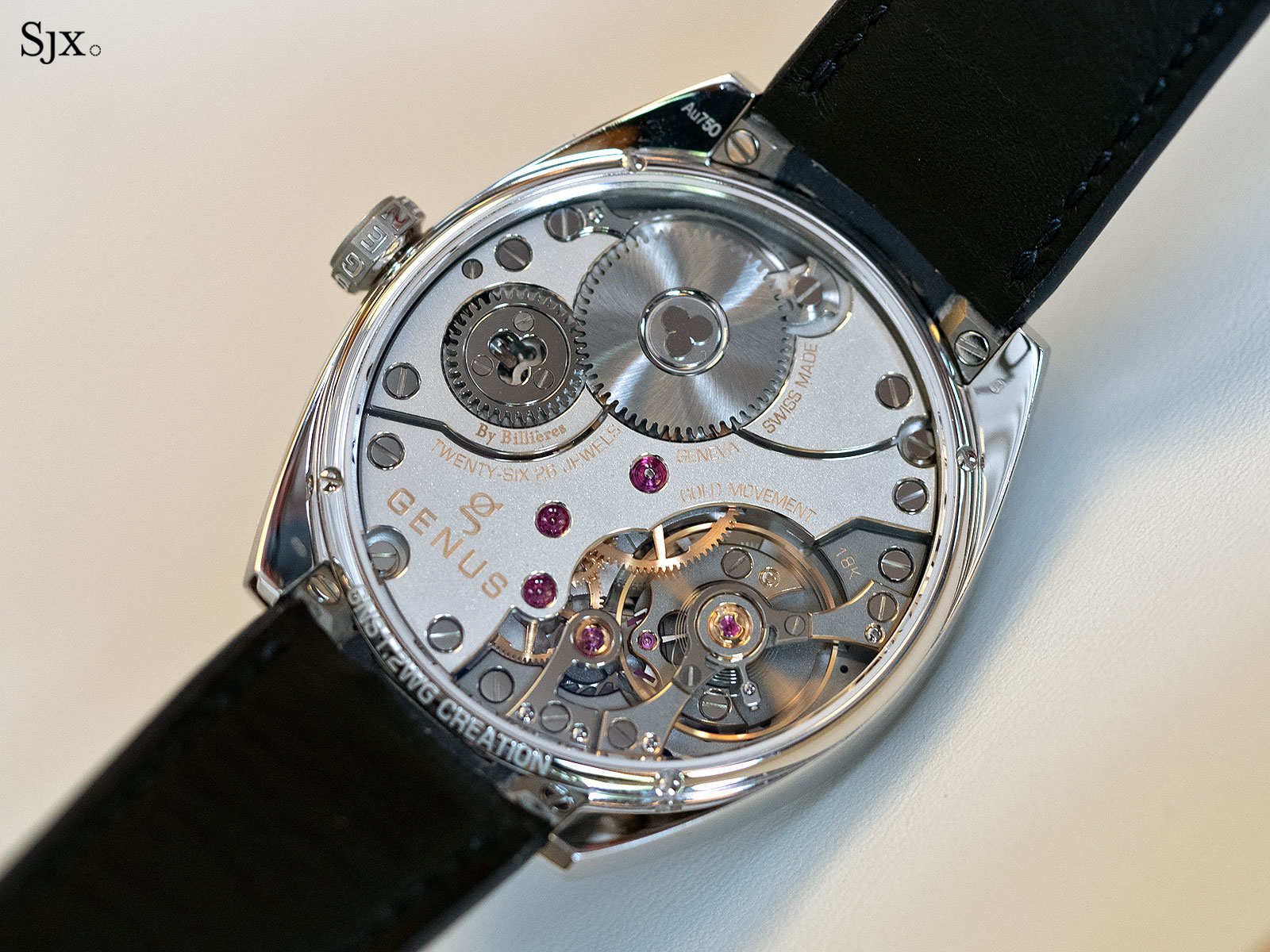 The finishing on the back is as good as it is on the front, but easy to observe due to the more conventional shape and treatment of the components.

One decorative detail the movement does lack is inward angles on the bevelled edges of the bridges and cocks, both on the front and back. 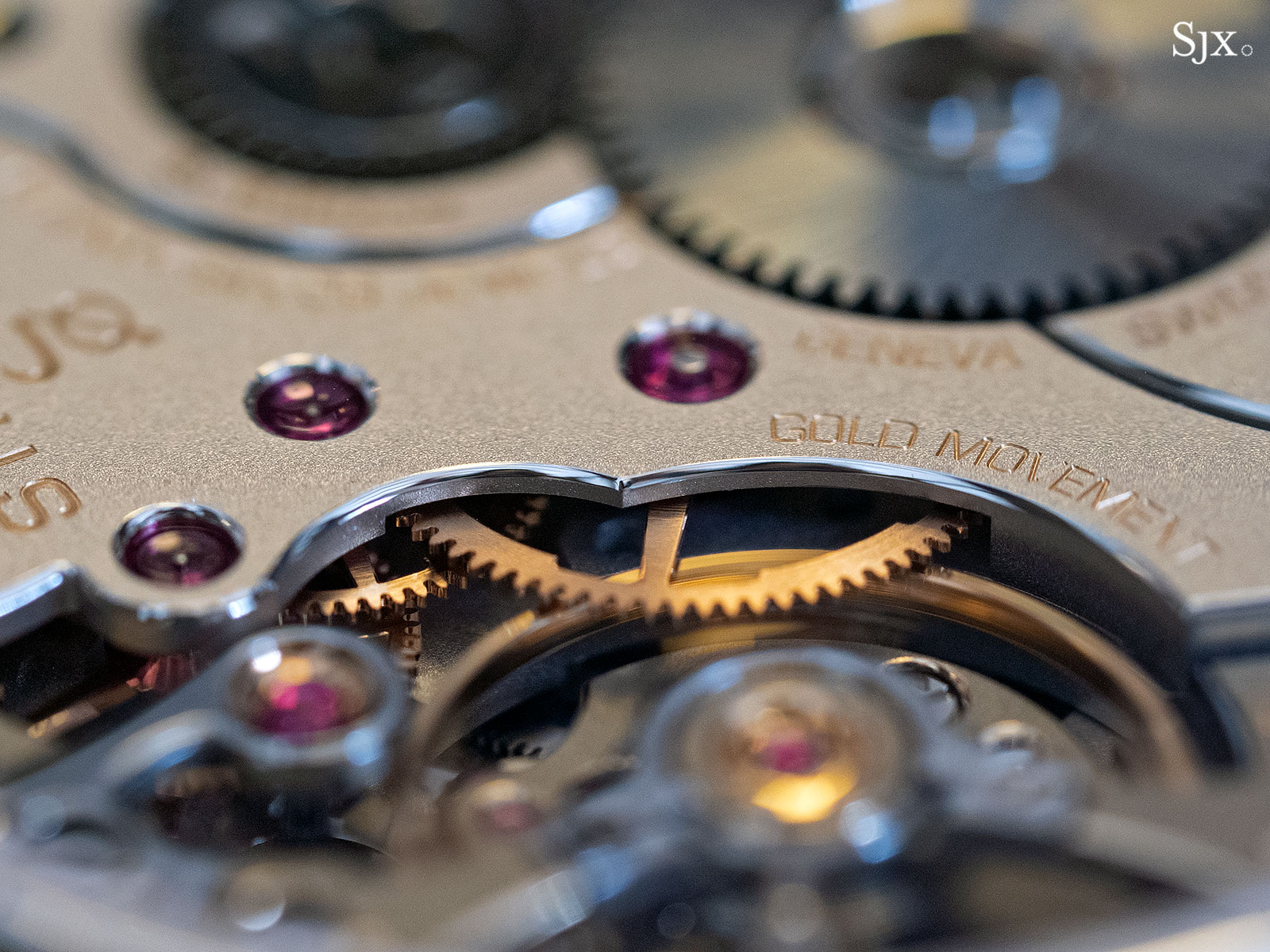 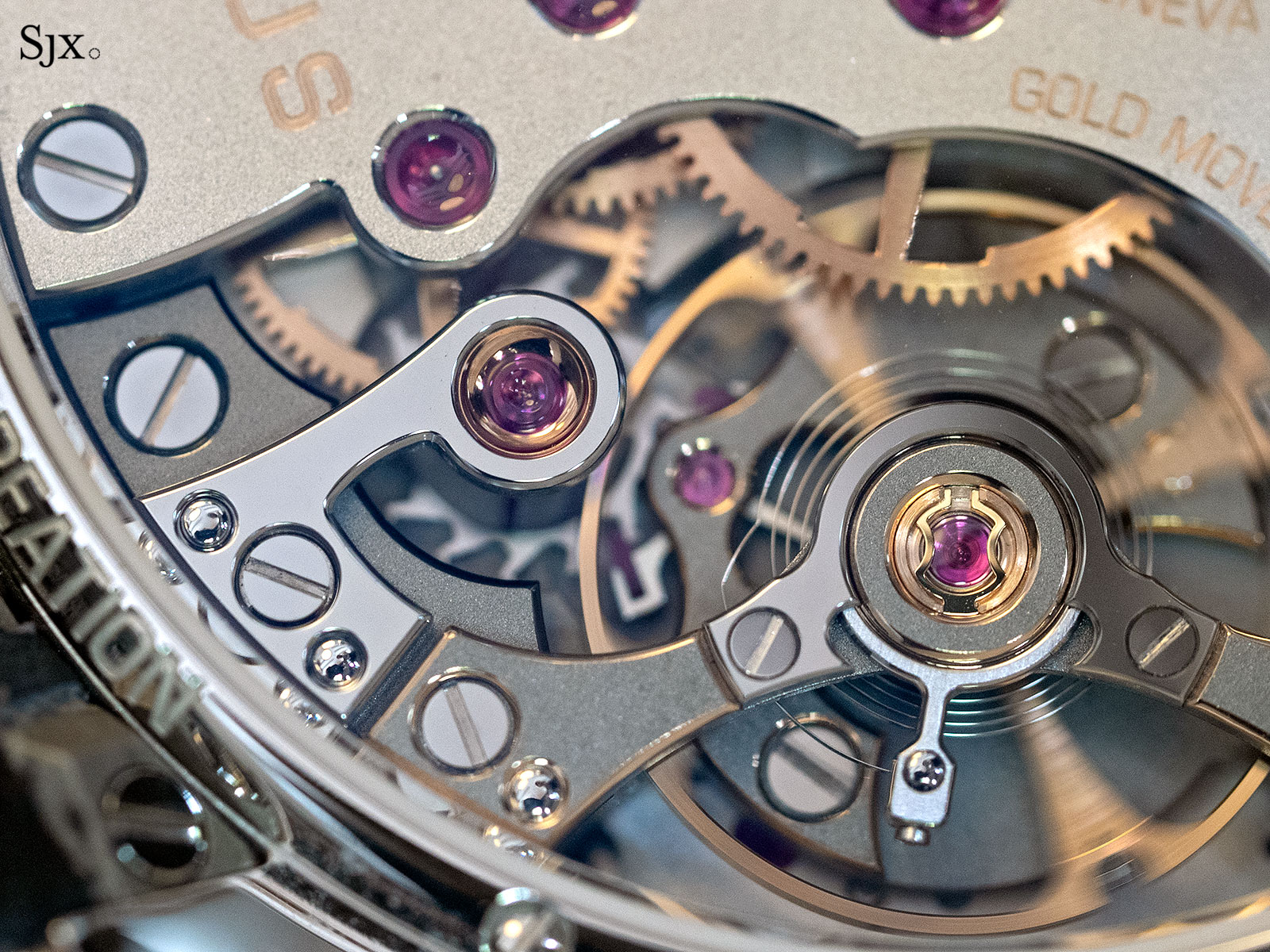 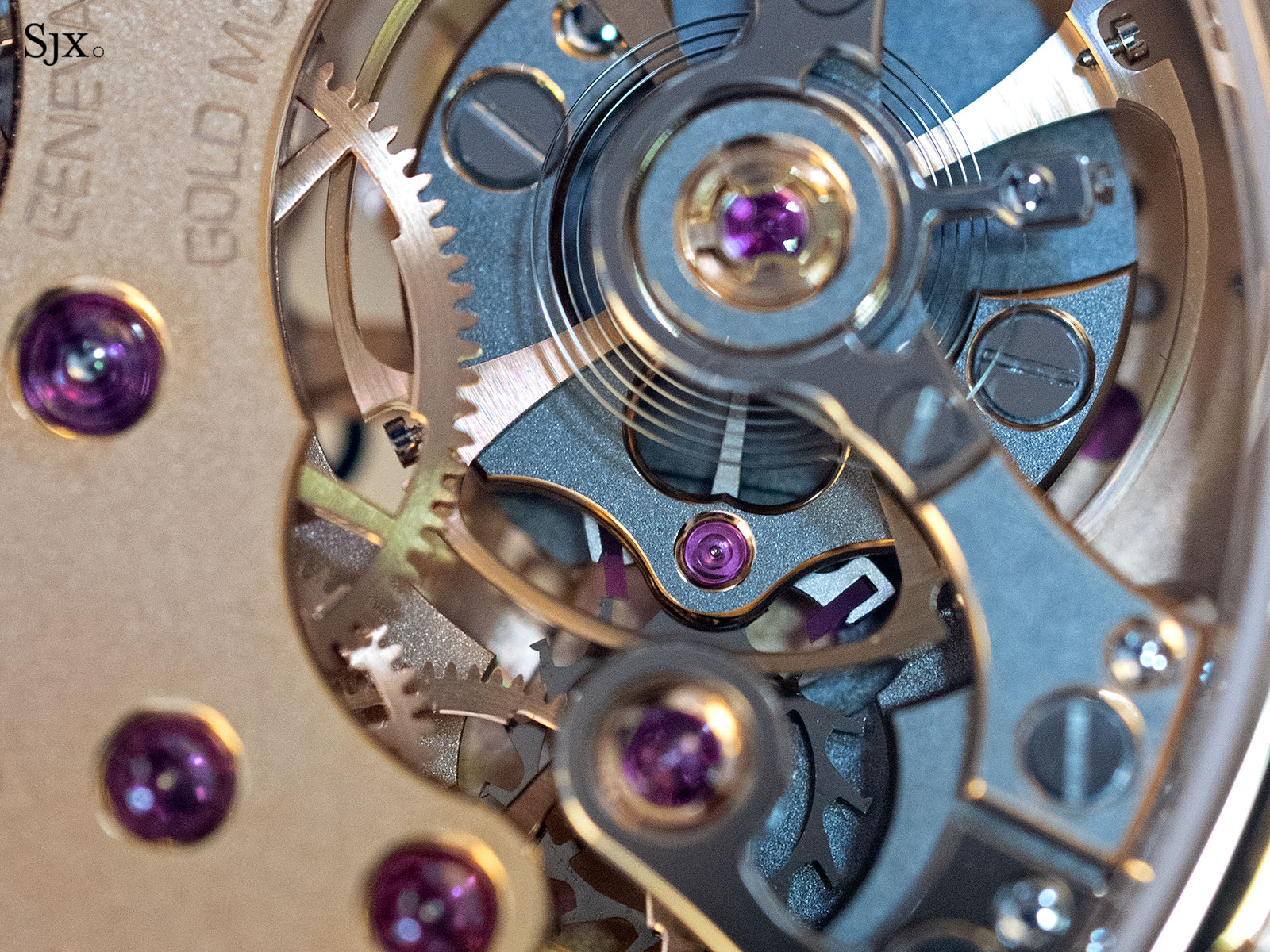 The finishing on the movement is matched to the case colour, so the rose gold case contains a movement with rose gold bridges. The watch is large, measuring 43mm by 13.1mm, but sits well on the wrist. That’s because the lugs are short and curved, allowing the case to hug the wrist. And a good deal of the height is a result of the “box type” sapphire crystal that rises up over the case, so it does not seem as thick as the numbers indicate.

And despite its size and being in 18k gold, the watch is not overly heavy as the case walls are kept to a minimum since the movement is a large 38mm in diameter. 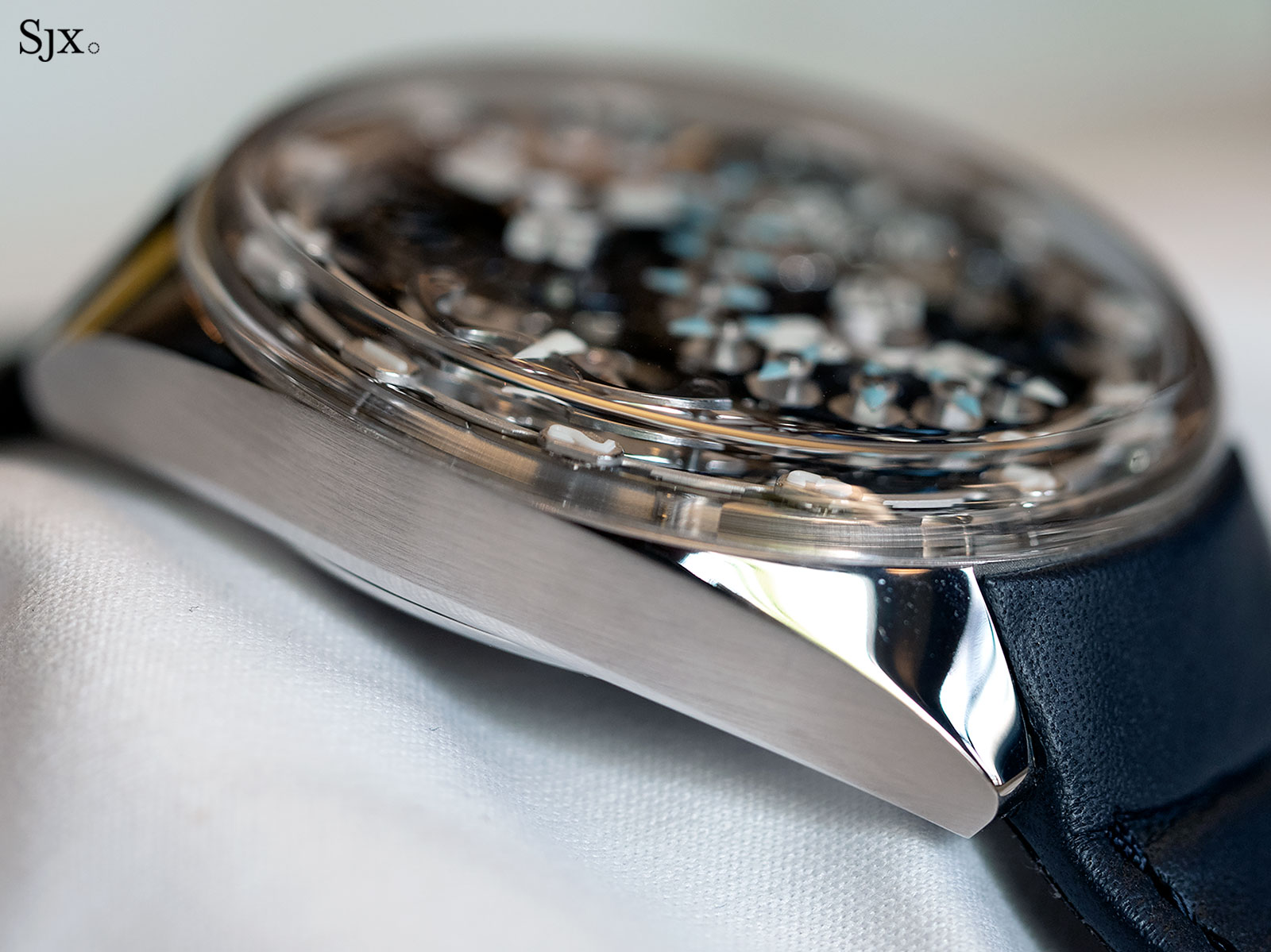 Had this watch been launched a decade earlier, perhaps as one of the Harry Winston Opus instalments, it would have been a hit. Today many avant-garde watches have come and gone, so it is more difficult to stand out, but the GNS 1 still manages to impress. The mechanics are ingenious, complex and executed to a high degree of finishing. In short, it is unique; there is nothing else like the GNS 1 on the market.

Though it was launched with a stupendously high retail price of 288,500 Swiss francs, Genus repriced the GNS 1 in late 2019. It now costs 148,000 francs, which is not cheap but within reason.

According to the brand, the reason for the price reduction is that the cumulative orders for the GNS 1 have reached a level where the brand enjoys enough economies of scale such that the price can be substantially reduced.

The GNS 1 is available direct from Genus. As pictured in white gold (ref. GNS1.2WG), it is limited to eight pieces. Other variants will be available in the future.