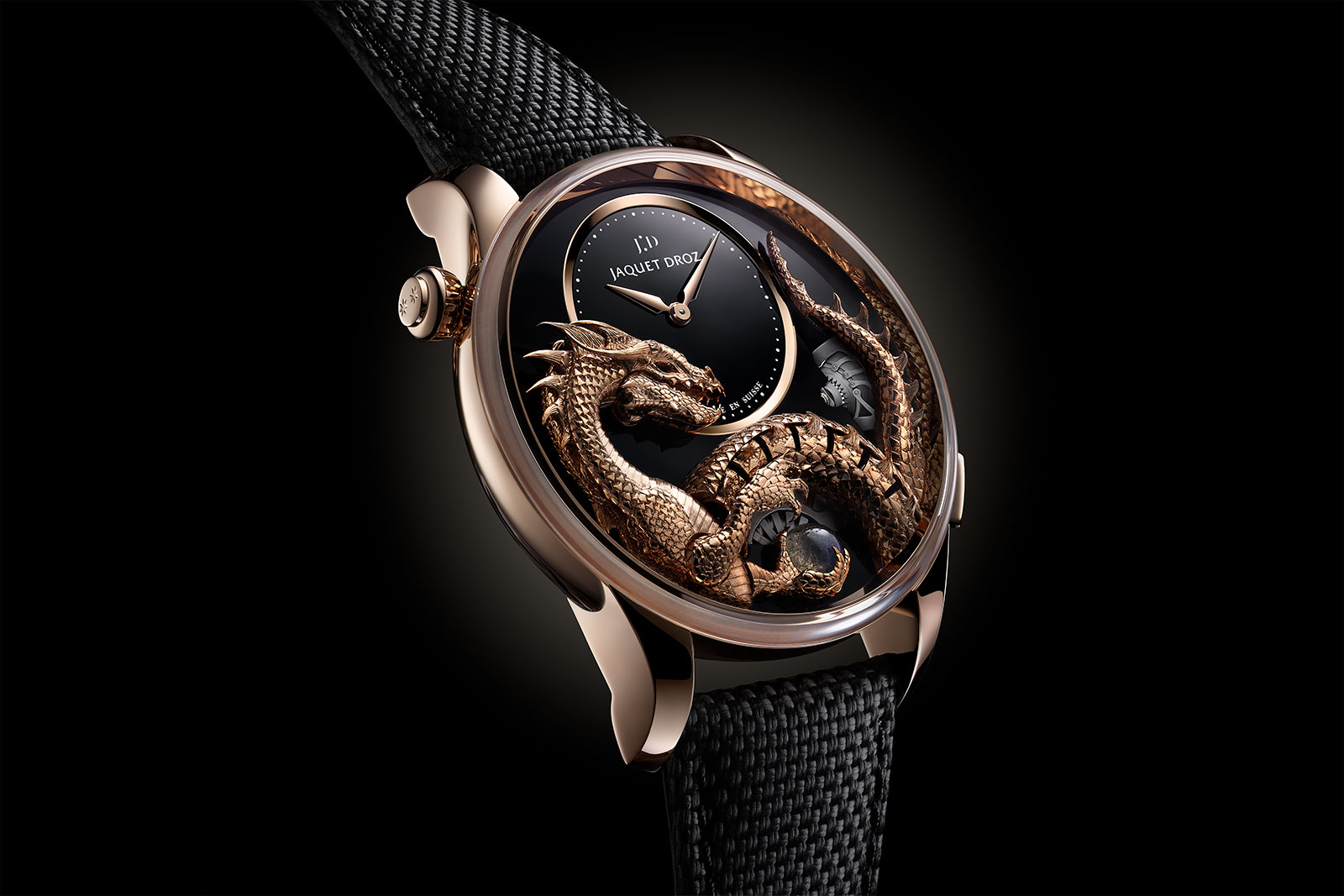 Already a prolific maker of wristwatches with tiny, intricate automatons – with tropical birds and magic lotus being part of its repertoire – Jaquet Droz has turned to the realm of Middle Earth for its latest creation. Featuring an automaton with nine mechanical animations, the Jaquet Droz Dragon Automaton was designed by Canadian illustrator John Howe.

When it comes to dragons and fantasy lands, Mr Howe’s credentials are impeccable. Amongst his past roles was one of the two chief designers of The Lord of the Rings trilogy. And aside from the Dragon Automaton, another of Mr Howe’s most recent works was designing The Lord of the Rings: The Rings of Power, the Amazon production that’s the most expensive television series in history.

Dragons are a common theme on watches, but usually of the East Asian kind and typically in the Year of the Dragon of the Chinese Zodiac – a simple reflection of where most demand for luxury watches originates. A dragon of the European fantasy genre is less common; in fact, I cannot recall another watch that depicts themes from the fantasy genre.

This makes the Dragon Automaton unique, both figuratively and literally. The motif is usual and esoteric so its appeal will certainly be niche at best. 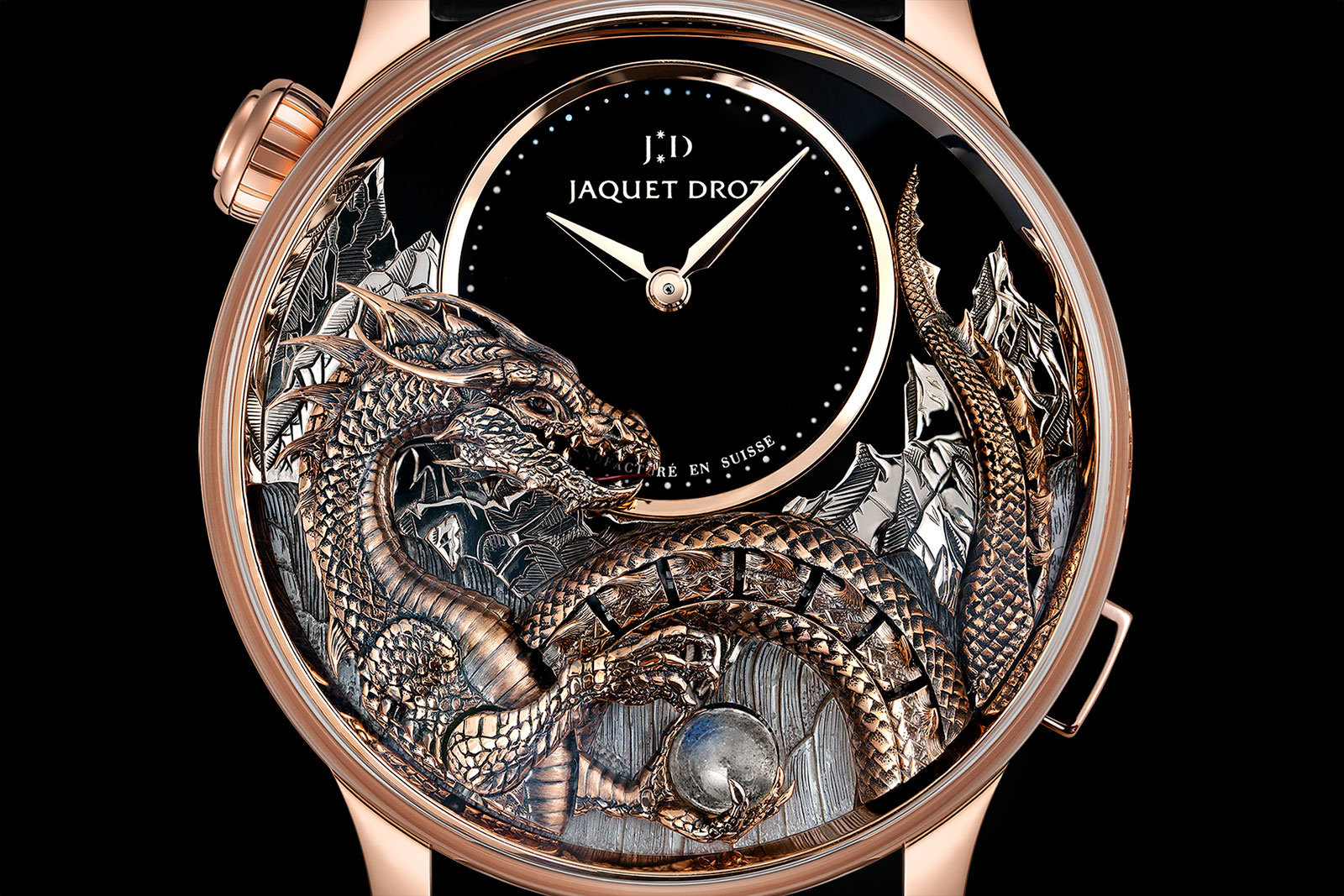 But that is exactly the point, since each Dragon Automaton will be a one-of-a-kind creation that’s made to order, with the client  able to customise the dial in terms of materials and decoration. Such custom watches are Jaquet Droz’s focus now, so this watch is a perfect fit for the brand’s philosophy.

It is also tangibly impressive because Jaquet Droz excels at automatons and intricate dial decoration. But that impressive mechanical complexity comes at a cost – the watch is enormous at almost 17 mm thick and also well into six figures in terms of price. 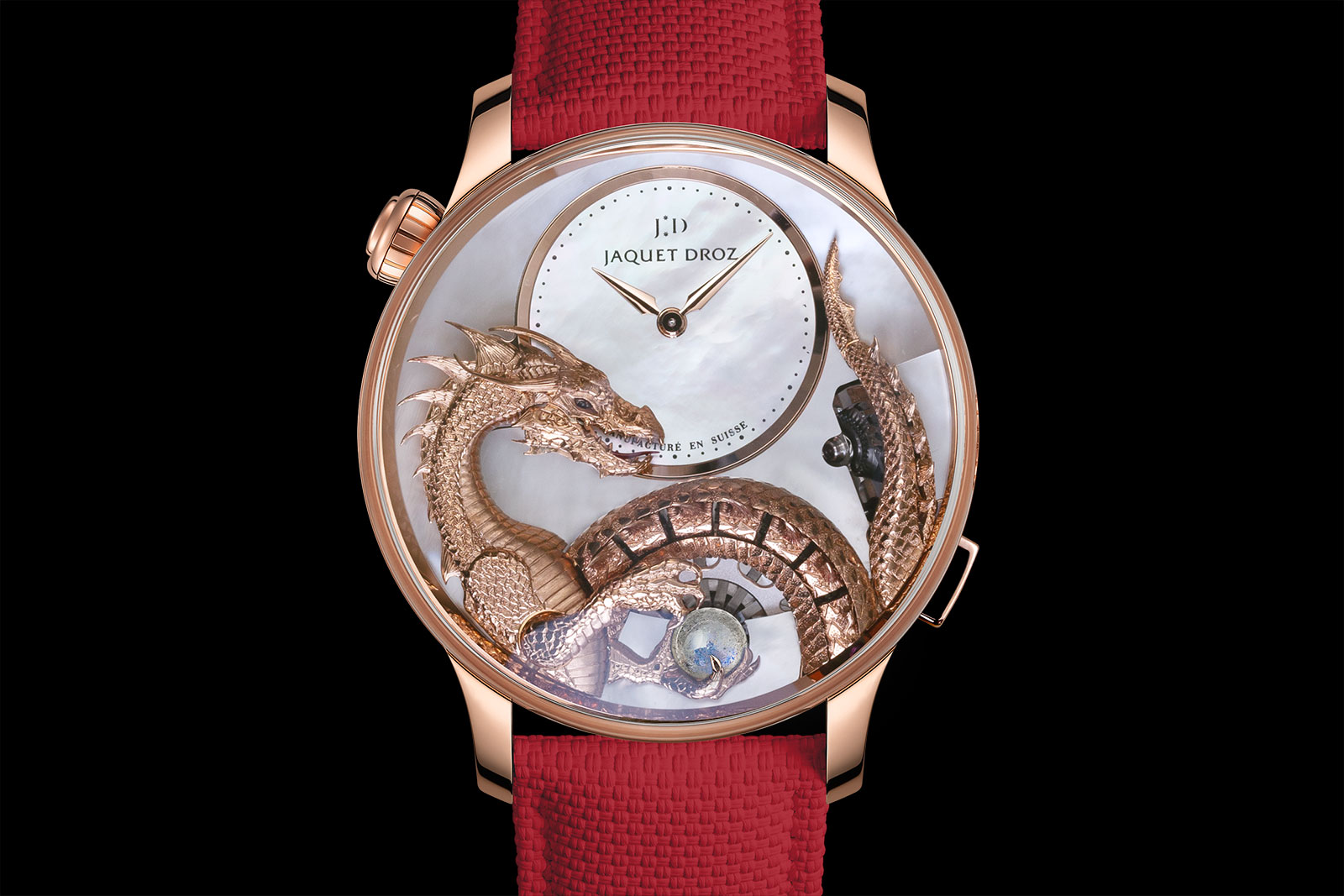 The version with a mother of pearl dial

Although Canadian by birth, John Howe has lived in Neuchatel for three decades, putting him a thirty minute’s drive from La Chaux-de-Fonds, the home of Jaquet Droz. Over his career Mr Howe has created the illustrations for various books relating to J.R.R. Tolkien’s fantasy series, but his best known work is unquestionably the distinctive visual atmosphere that define The Lord of the Rings films and television series.

His role in the creation of the Dragon Automaton was similar. He envisioned and drew the dial motif, which was the refined in collaboration with Jaquet Droz, which finally transformed his vision into a miniature mechanical wonder. 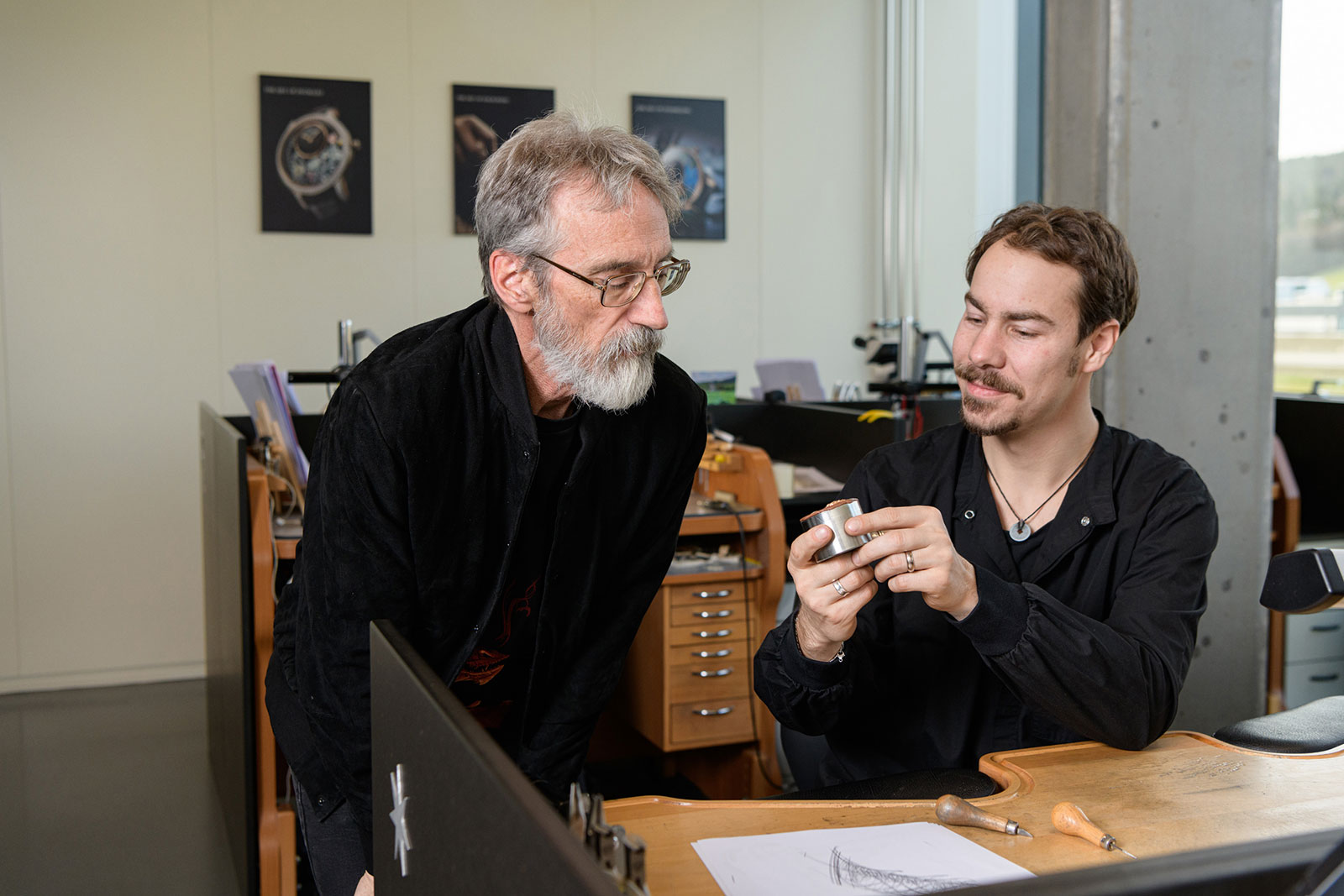 The pusher at four o’clock activates the mechanical dragon on the dial, which is made up of nine individual animations: “The sacred animal’s spine undulates like its tail; its eye and jaw open and close; its tongue moves; its crest rises and falls; its claws grasp a continuously rotating stone.” 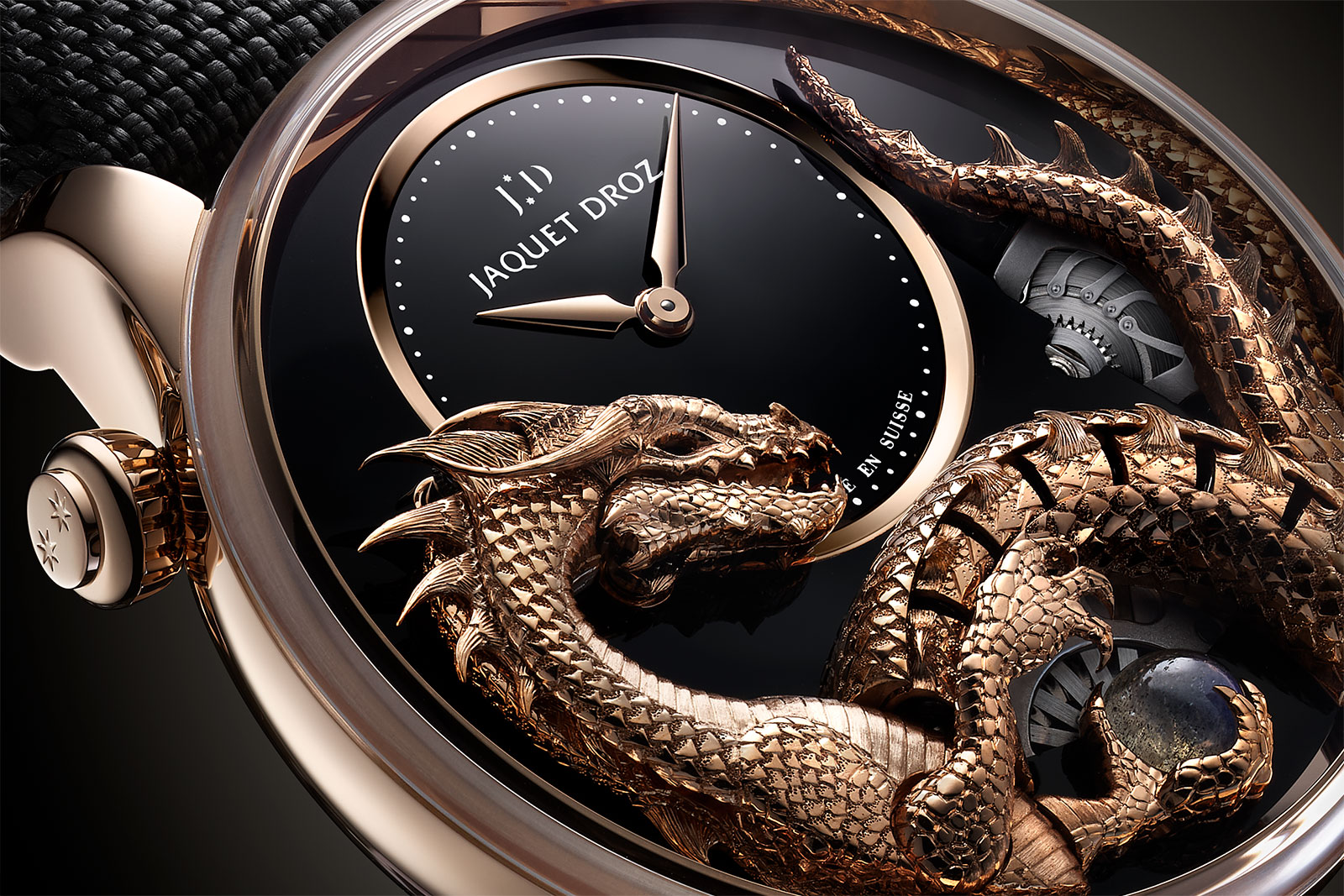 Each of them start and stop at random during the 10-15 second cycle of the automaton, so the motion of the dragon is unique each time. According to Jaquet Droz, this makes the Dragon Automaton amongst the most complex wristwatch automatons ever made – a credible claim.

While the automaton itself is a permanent part of the motif, the rest of the watch can be customised. Amongst the choices are the dial material, engraving on the dragon and case, or even a case of clear sapphire crystal. 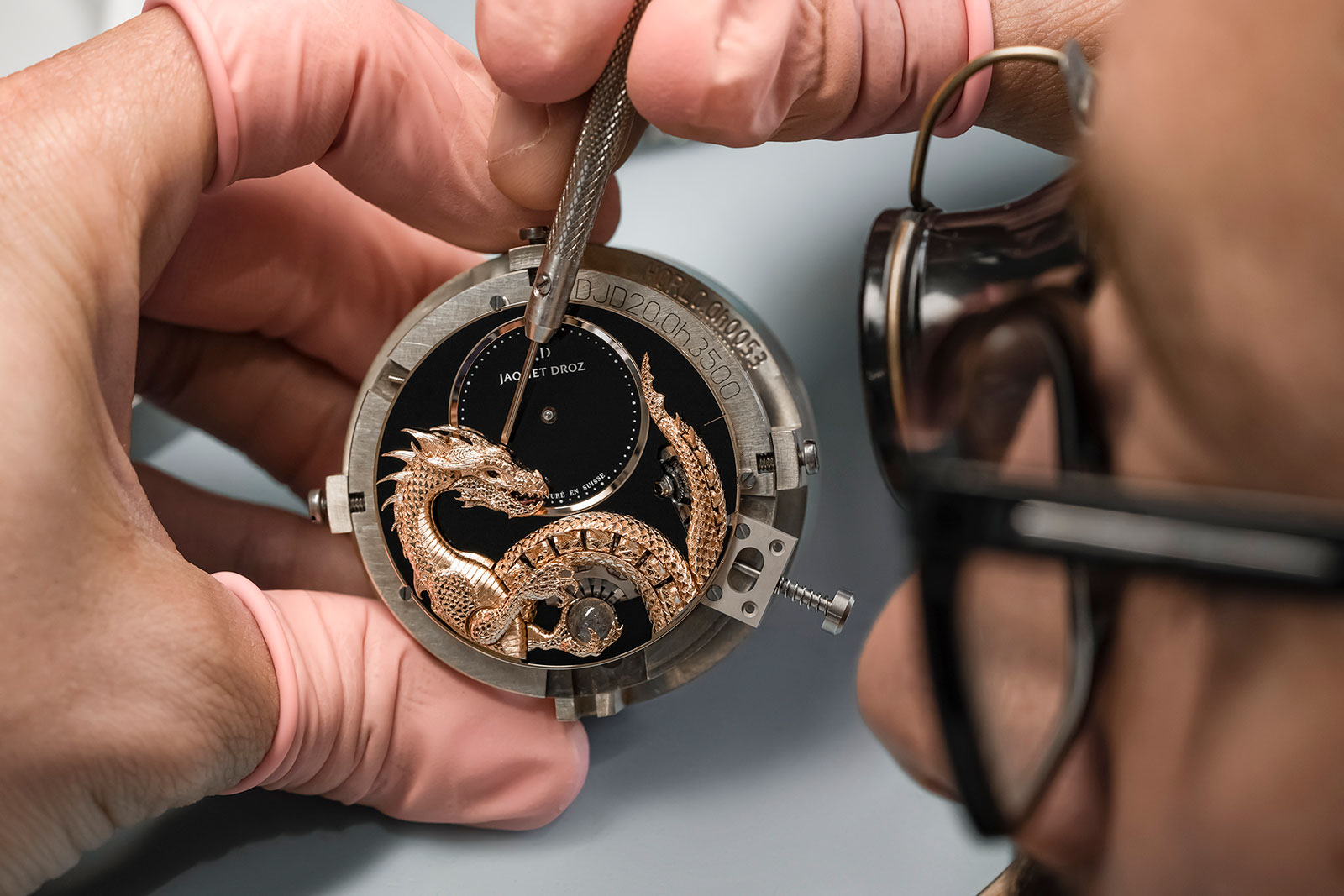 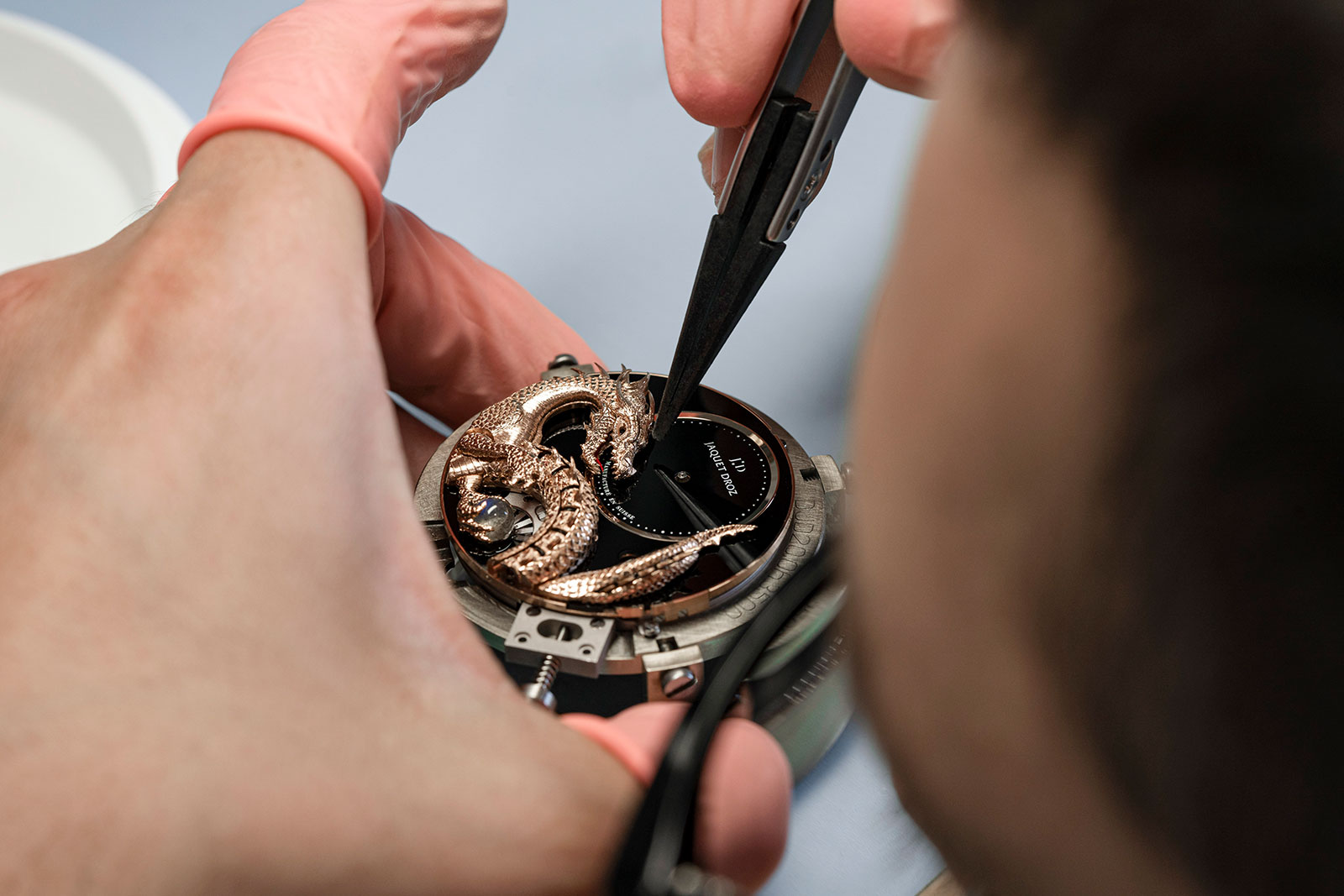 Realising the miniature automaton required a two-part movement. The time-telling portion is actually a small automatic calibre originally developed for a ladies watch. Having a power reserve of only 38 hours because of its compact size, the base movement is visible at 12 o’clock on the back. 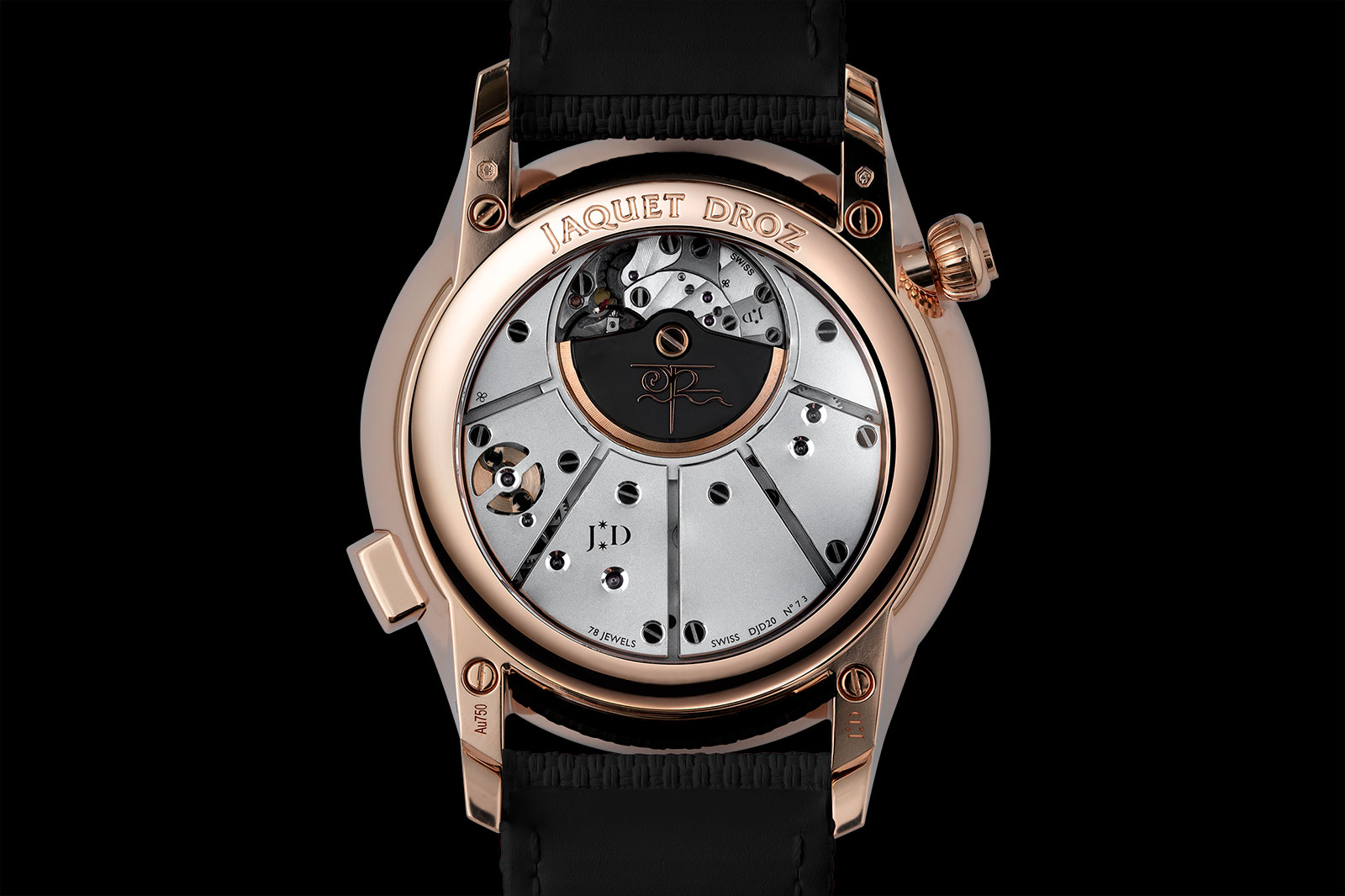