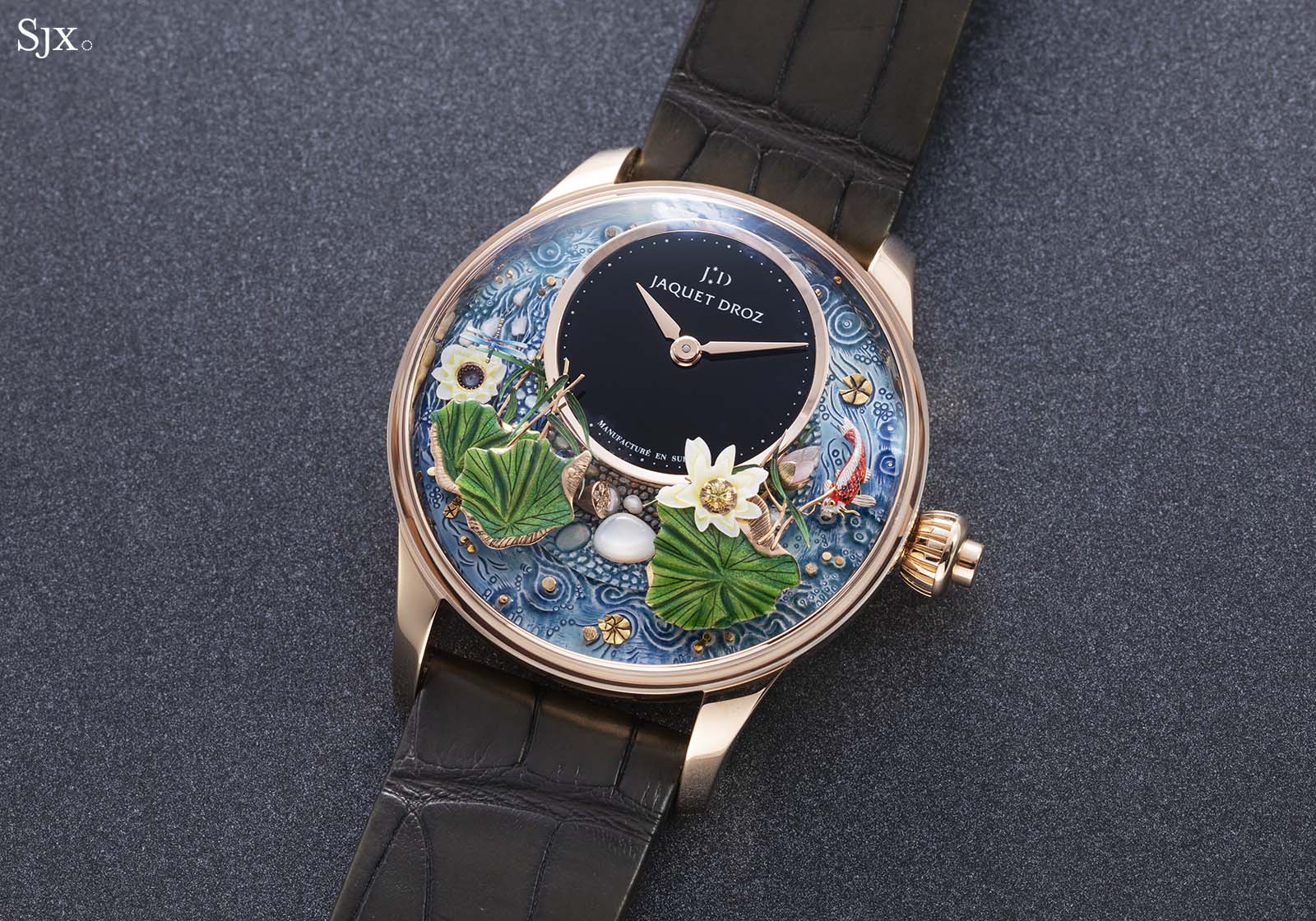 Even though Jaquet Droz is a part of Switzerland’s largest watchmaking conglomerate – its parent Swatch Group also owns more mainstream names like Omega and Longines – the brand has consistently demonstrated an independence of thought with its impressive range of automata wristwatches – the latest being the Magic Lotus Automaton.

Jaquet-Droz built automata that were shockingly lifelike for the period, with his greatest invention being The Writer. A seated figure capable of writing a pre-programmed sentence up to 40 characters long, The Writer was such a feat that during the Spanish Inquisition, its maker was suspected of using witchcraft to create the uncanny contraption.

Over two centuries later, Jaquet Droz has developed several modern-day interpretations of its allegedly supernatural devices, often wristwatches that combine an automaton with a minute repeater – and even in monumental pocket-watch format. The recent Magic Lotus Automaton, on the other hand, is much simpler, but one of the most unusual and intriguing. It is not a minute repeater, but manages to be brilliantly conceived and effective.

Despite not having a repeater, the Magic Lotus Automaton is still a mechanical bombshell – so it is massive, measuring a 43 mm wide and 16.96 mm high. The size of the watch stands in stark contrast to the delicate details of the dial, and it is makes a big statement on the wrist.

The pink gold case is in typical Jaquet Droz style, with a simple design and polished finish so as to ensure it does not detract from the mechanical scenery on the dial. Though straightforward, the signature Jaquet Droz case design does incorporate two details that make it a bit more elegant, though not by much given the size. One is the sloping case sides – the case middle is like a shallow bowl – and the sharp, downward arch of the lugs. In short, the case is well designed despite being simple. 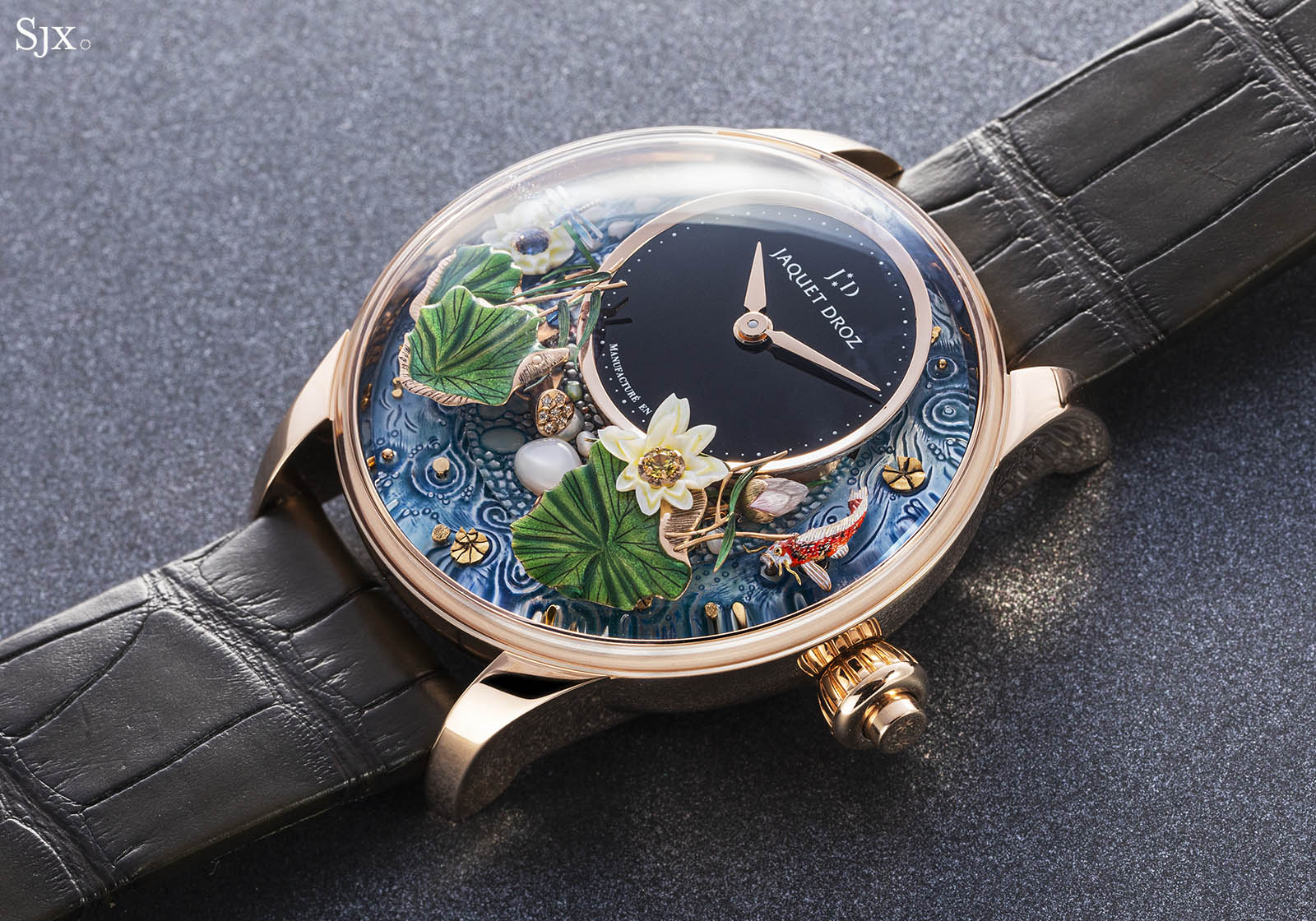 The watch is also available in 18k white gold 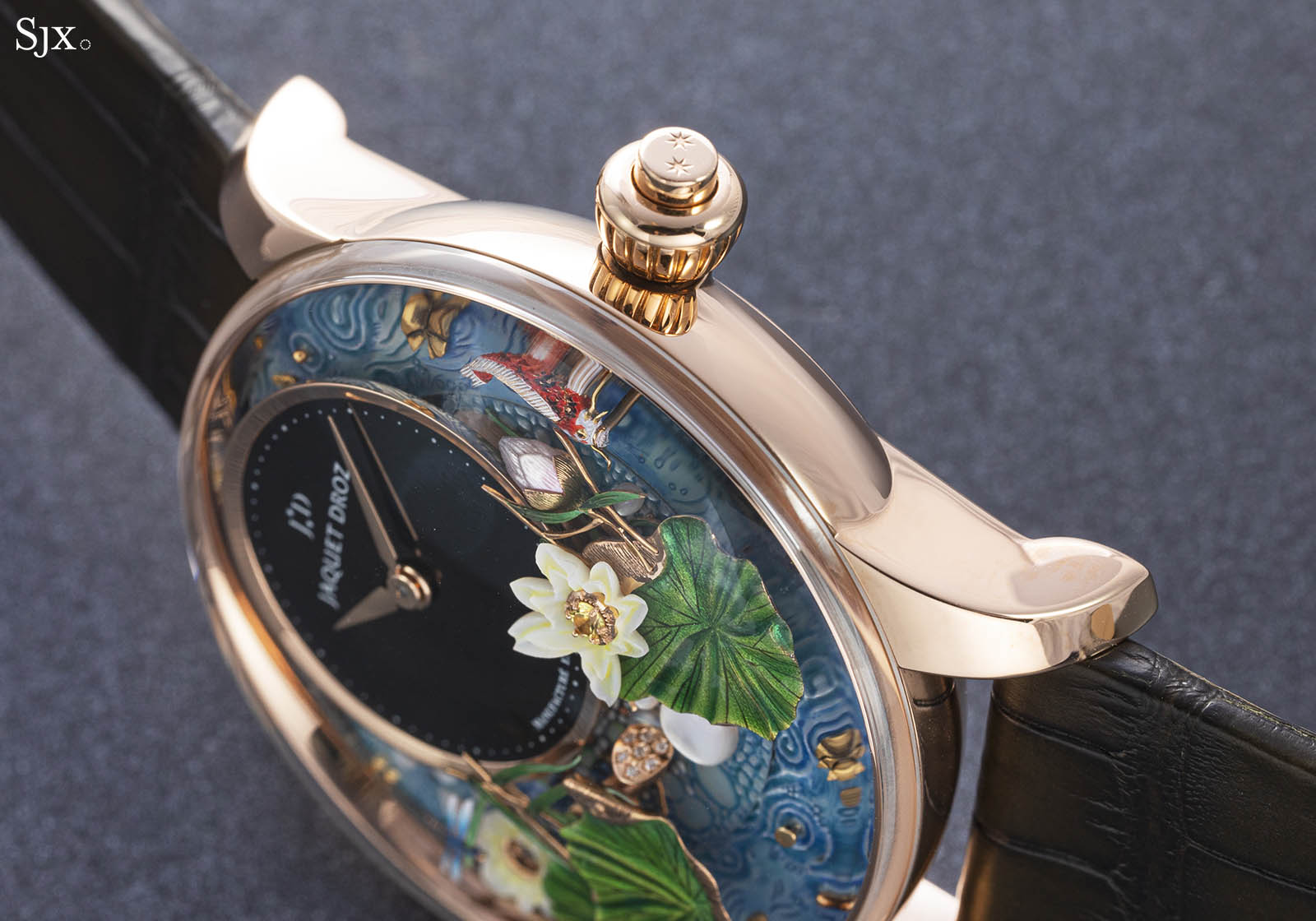 Taking inspiration from a zen garden, the dial depicts with a gently flowing stream that circles the dial – literally –  made up of a rotating disc that completes two revolutions a minute. Mounted on the disc is a koi that swims with the current, its tail swishing back and forth. As the koi travels around the dial, it swims under three-dimensional foliage, an allegory of the four seasons represented by seasonal flowers and plants.

Apparent only upon closer examination are the subtle motions of the koi – not only does the its tail move from side to side, the fish seemingly dips its head each time it passes under the lotus leaves. The highly naturalistic portrayal of the koi is perhaps the most impressive aspect of the watch, accomplished with a set of stacked discs within the automaton mechanism.

The subject of four patents, the movement that brings the garden to life is made up of two parts: the base movement and the automaton module on top. And the module is essentially a secondary movement on its own, a donut-shaped mechanism for the animation, with its own going train and power source within the centre of the donut.

Its complex nature means the entire movement has a total of four barrels: two in the base movement, which has a 68 hours power reserve; and another two in the centre of the donut that power the automaton for four minutes.

Turning the crown in one direction winds the base movement, and the automaton in the other. And engaging the pusher integrated in the crown activates the four-minute animation of the automaton – one of the longest mechanical sequences ever developed by the brand. 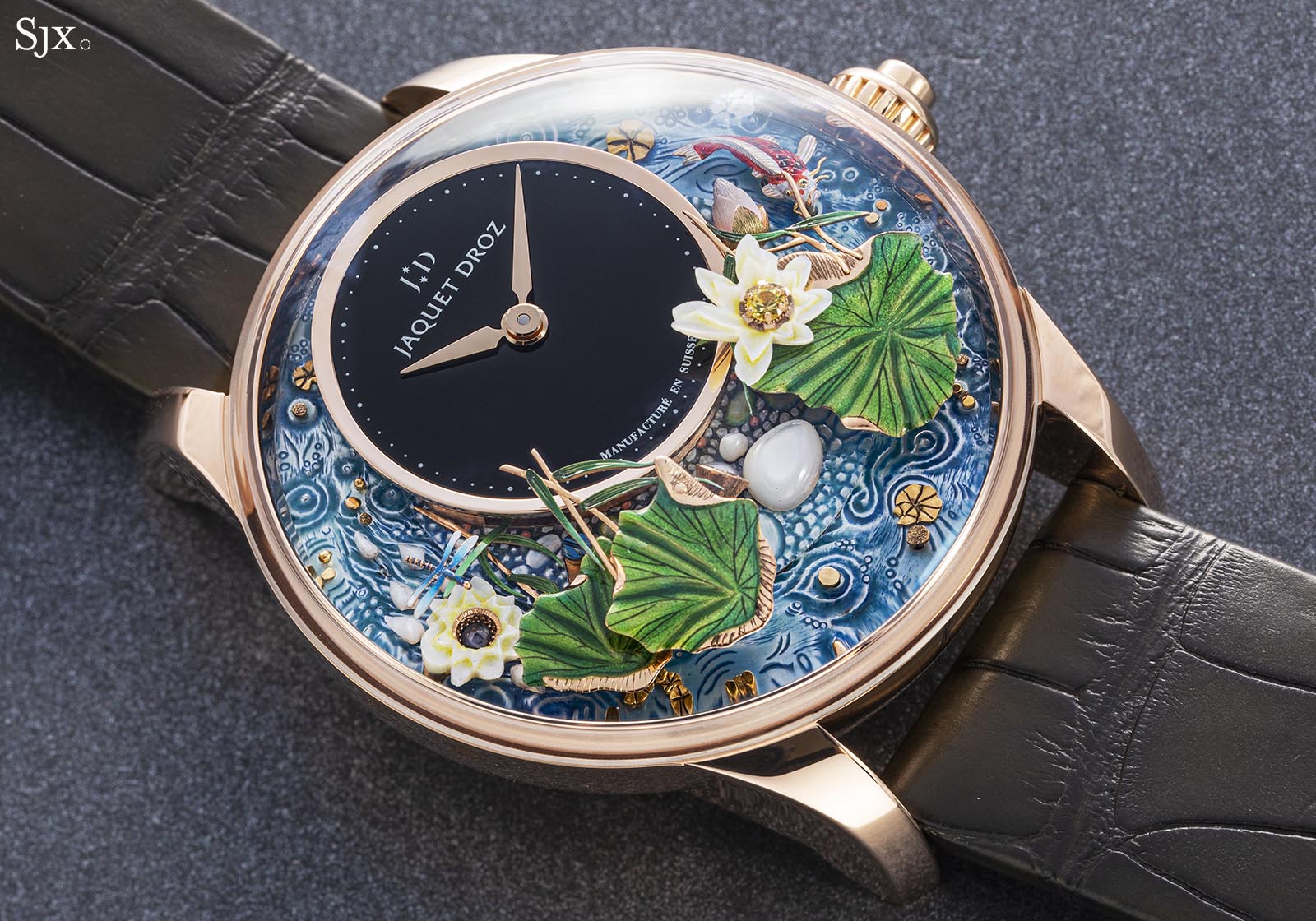 Also located within the centre of the donut is the secondary gear train drives the peripheral disc depicting the flowing water. Under the disc is the complex, donut-shaped mechanism that drives all of the animations on the dial.

The sideways motion of the koi’s tail is achieved with fixed outer ring with a wavy profile, effectively a large cam that has a radial feeler pressed against the fixed ring’s edge, controlling the motion of the tail as the feeler travels around the wavy periphery.

On the other hand, the descent and ascent of the koi is controlled by three pairs of racks that drive a vertical screw mechanism that raises and lowers the head of the koi in a fixed rhythm. 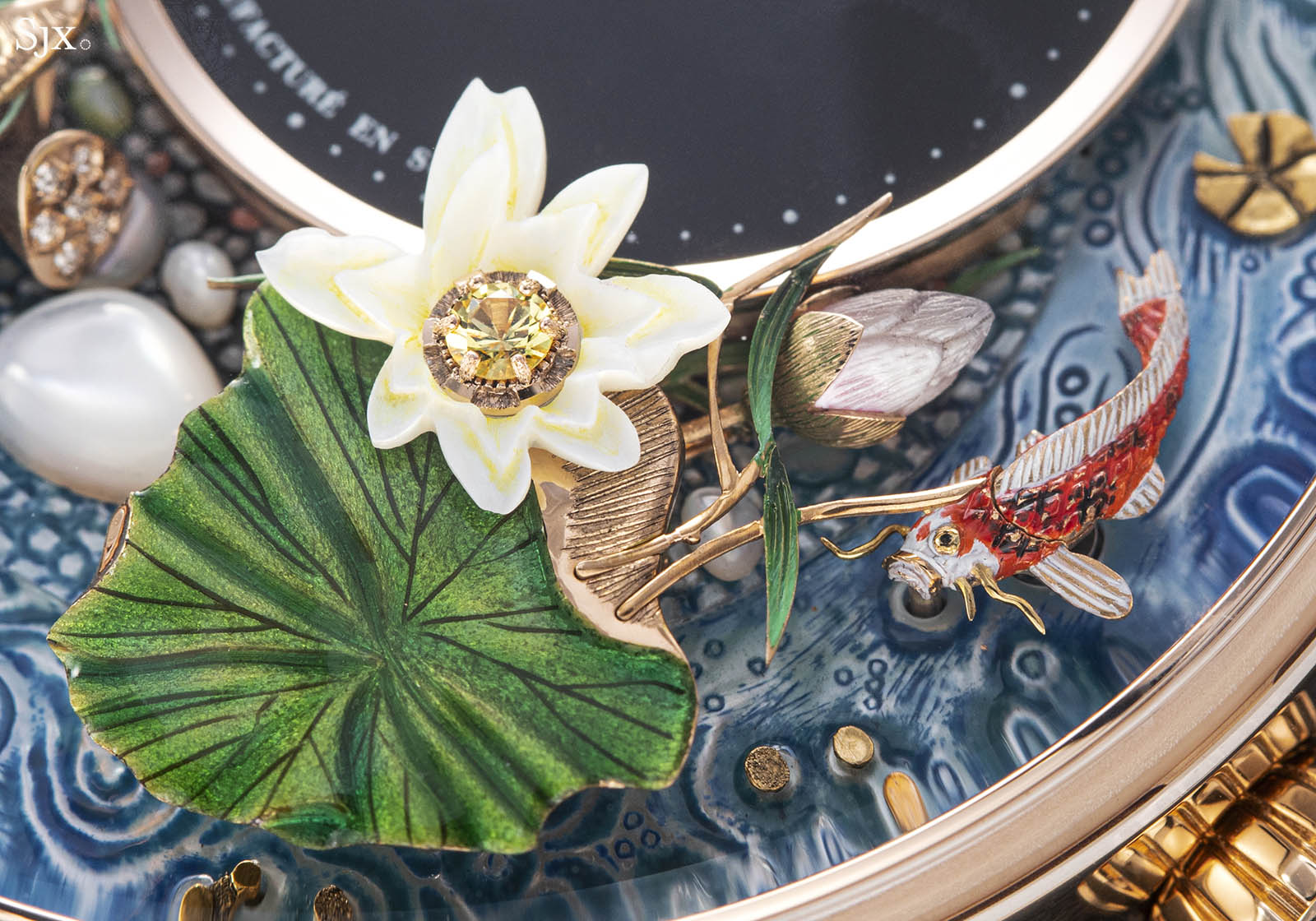 Even more intriguing is the is the colour-changing lotus flower that floats on the water, moving with the dial’s rotation. As the flower passes under the lotus leaves or sub-dial, the gemstone in its centre changes from a blue to a yellow sapphire, and then to a ruby, seemingly in no particular order.

A small geared ball integrated into the river disc is the secret behind the lotus: the three different gems are embedded into the ball, which rotates as it passes under the leaves or sub-dial. The ball relies on a Maltese cross for its periodic rotation, working in a similar manner to satellite time display found on the Urwerk UR-100 for instance. 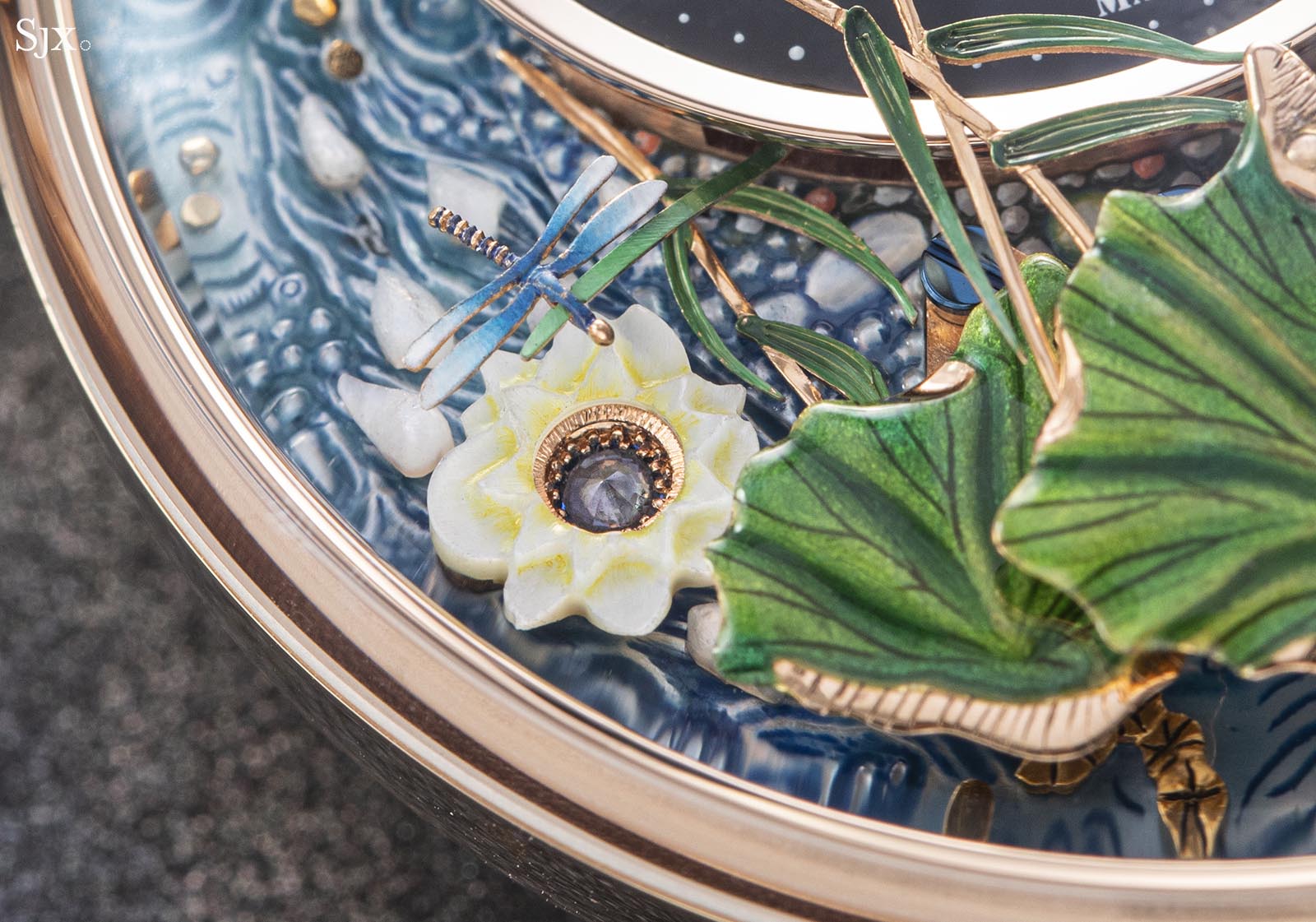 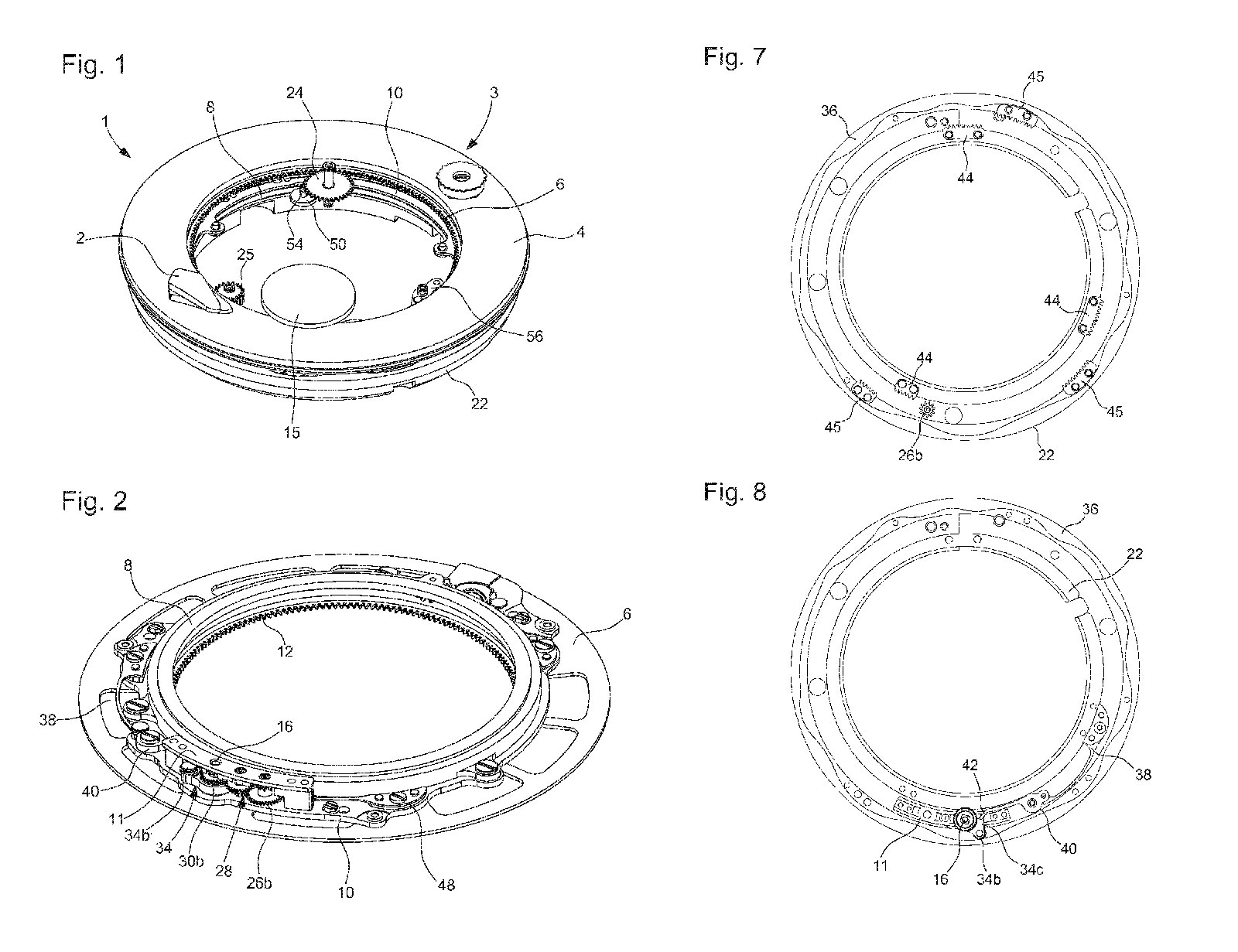 Diagrams from the Jaquet Droz patent EP3561610A1 for the automaton, showing the donut-shaped mechanism (figs. 1 and 2); and the wave-shaped cam that swivels the koi’s tail and the three pairs of racks (45 and 45) for the koi’s head (figs. 7 and 8)

All that horological dexterity is masked by intricate métiers d’art and gem-setting that require almost 210 hours to complete.

Even the tiniest elements are made of precious materials and decorated by hand. The dragonfly, for instance is made of solid pink gold, as well as engraved and enamelled by hand, as are the lotus leaves that are finished in a translucent green enamel. And the plain, jet-black sub-dial for the time is not merely lacquer, but is actually polished onyx.

The four flowers on the dial represent represent the four seasons, a symbol of the cycle of life. Spring is depicted by an unopened lotus bud at three o’clock made of mother-of-pearl carved in relief.

On its left is a lotus flower in full bloom, symbolising summer. Again its petals are mother-of-pearl, but this time finished with a thin coat of translucent paint. The yellow sapphire in its centre is secured with gold prongs, symbolising the pistil and stamens of a flower in bloom. 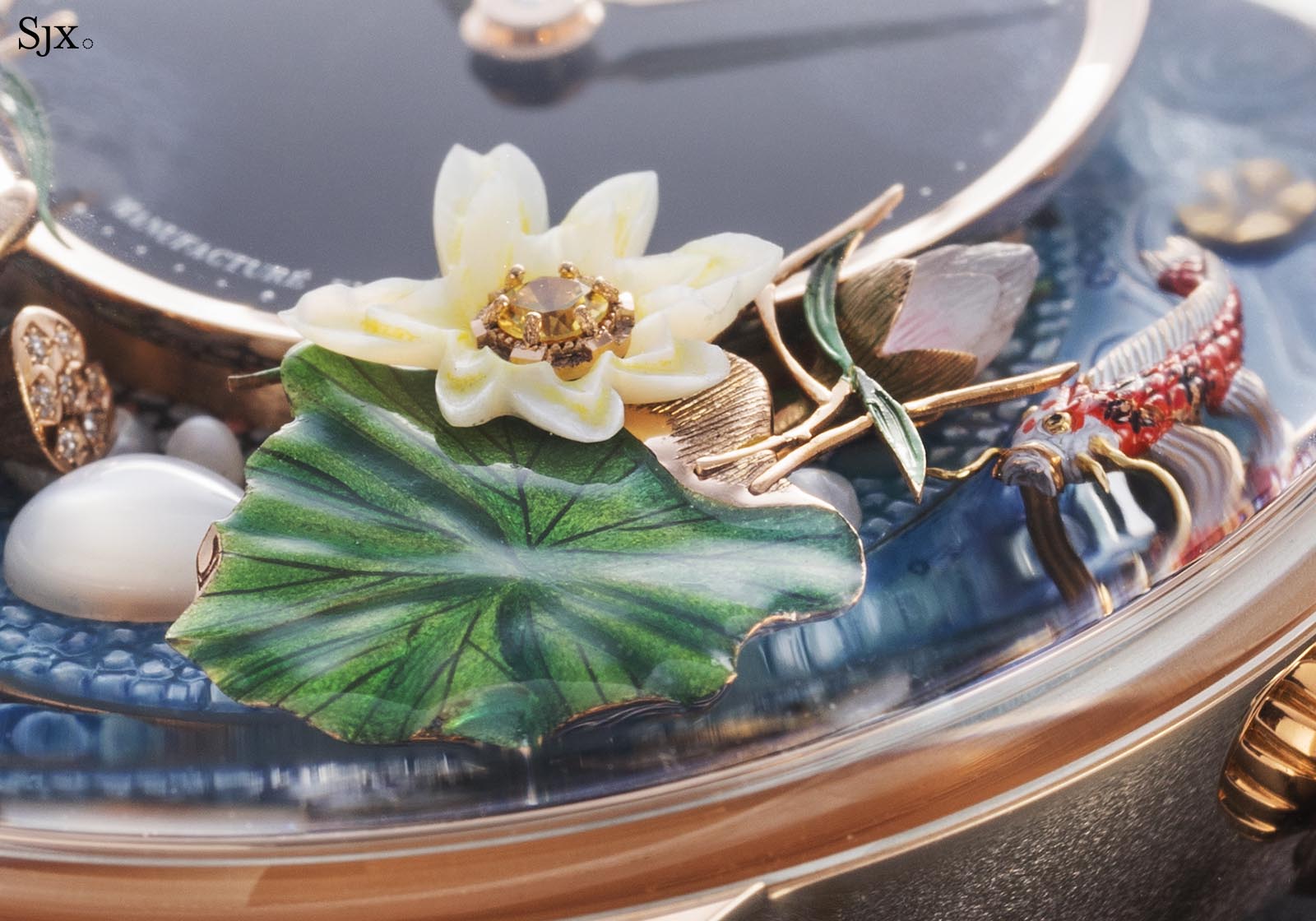 The flower that rests on the rotating disc represents fall. It is made of mother-of-pearl with a the colour-changing gem in the middle. And lastly, right below the off-centred dial is a seed pod signifying winter. It has been set with seven diamonds that represent the seeds. 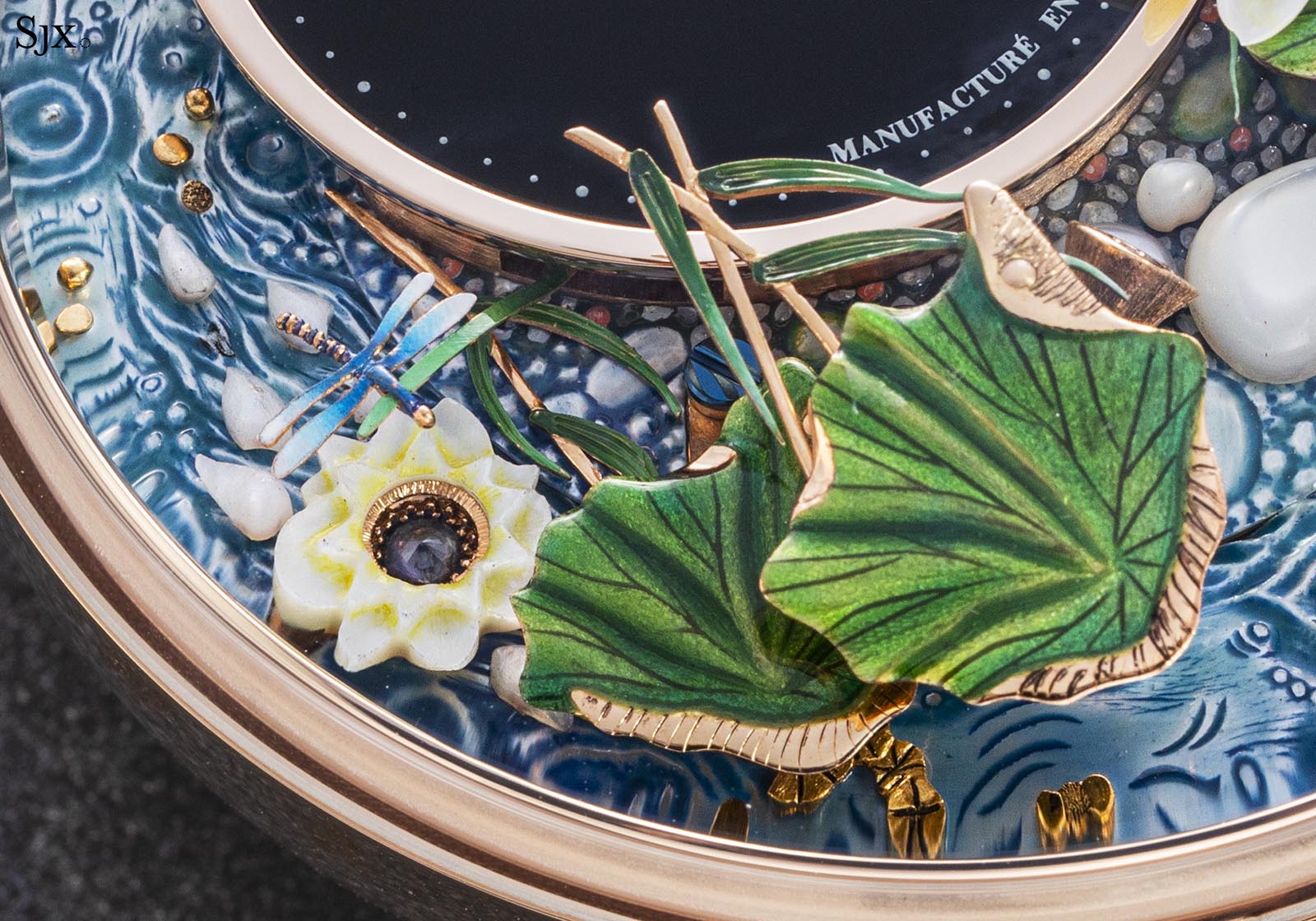 The colour-changing gem with the dragonfly at its resting position, indicating the automaton is fully wound 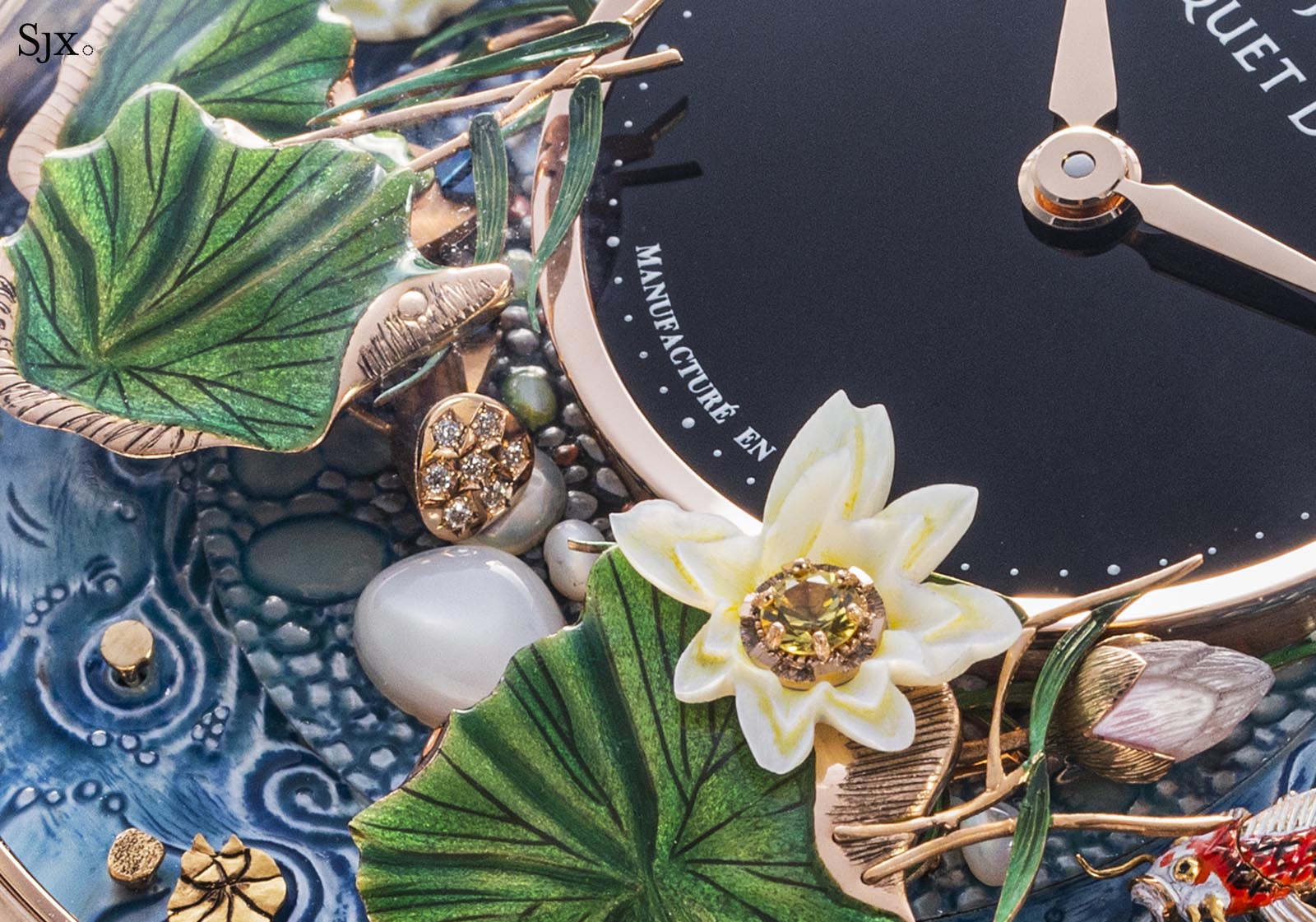 The tiny seed pod with its seven diamonds at centre, just below the sub-dial for the time

The Magic Lotus Automaton is powered by the automatic cal. 2653 AT2; variants of the same movement power the brand’s other automaton wristwatches.

Rather incongruously – because of the amount of elaborate, artisanal work on the dial – the movement is high-tech and equipped with a silicon pallet fork and hairspring. It is, however, not surprising, as the guiding philosophy of Jaquet Droz (as well as its sister brands like Breguet) is to combine traditional craftsmanship with cutting-edge mechanical watchmaking. 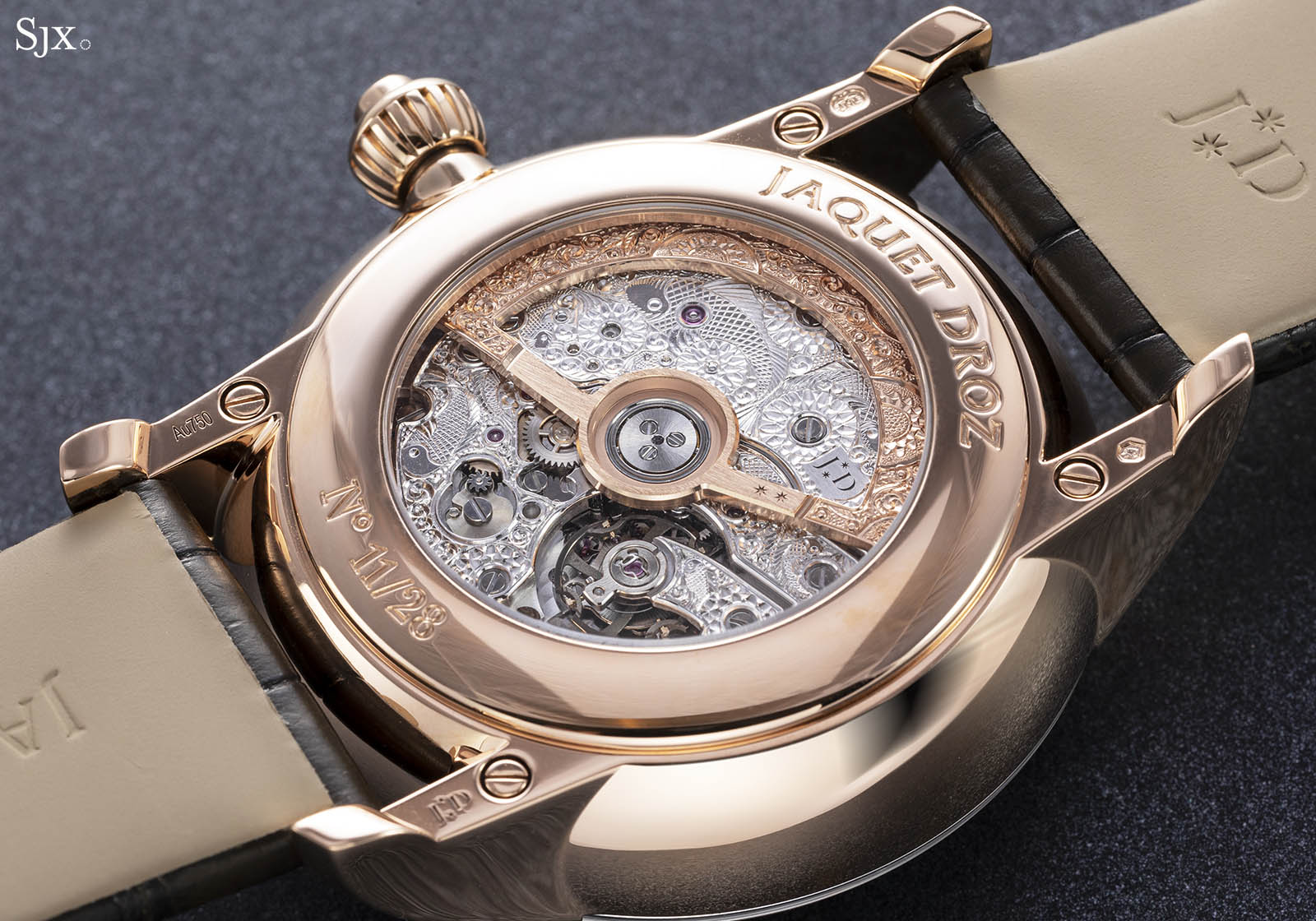 Craftsmanship is found not just on the front, but also on the back of the watch. The open-worked, pink-gold oscillating weight, as well as the bridges and cock, are all richly hand-engraved with motifs inspired by nature, echoing the details of the dial by incorporating carps and flowers. While it comprehensively covers practically every surface, the engraving on the movement is more abstract, and not quite as refined, as the decoration on the front. 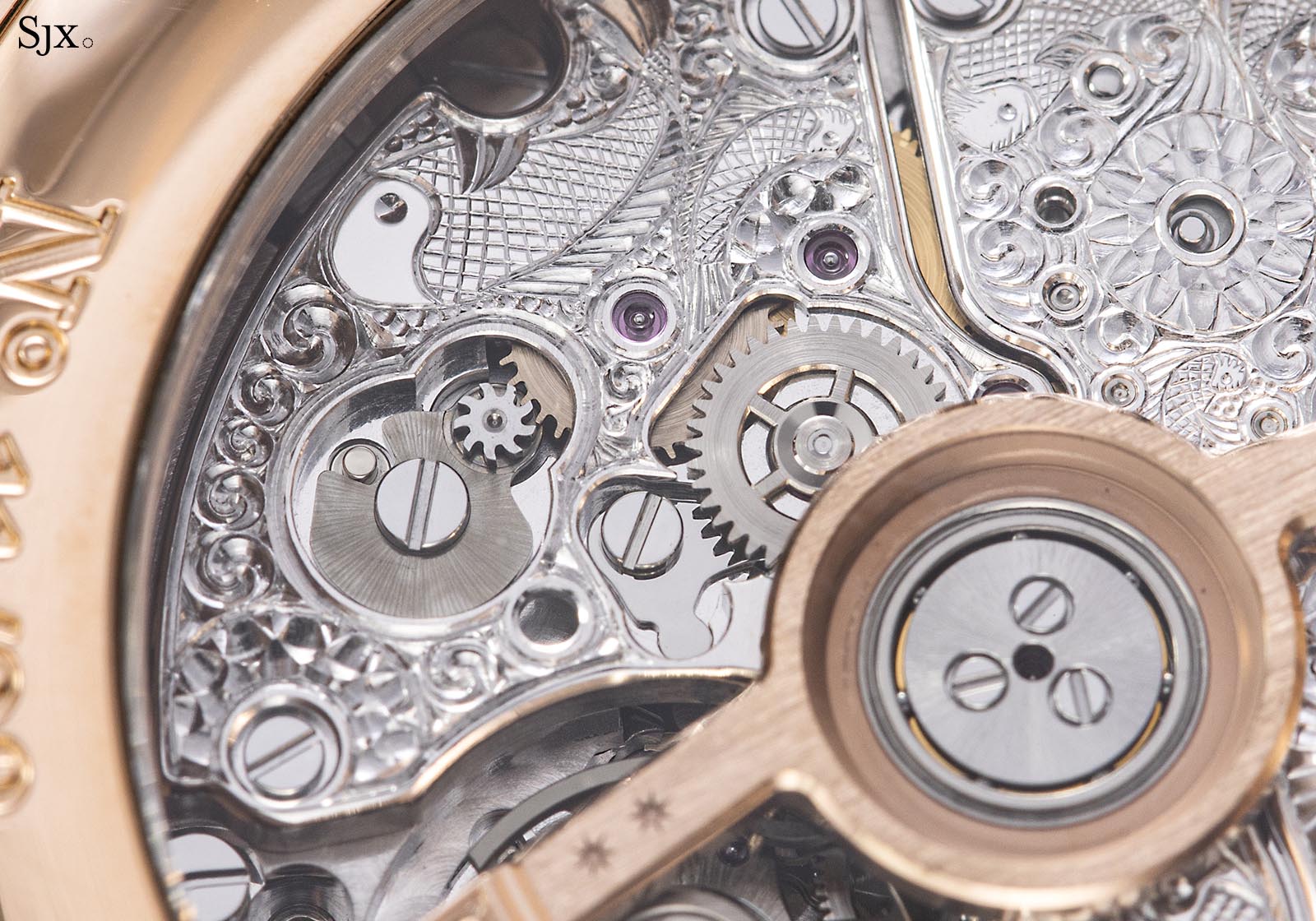 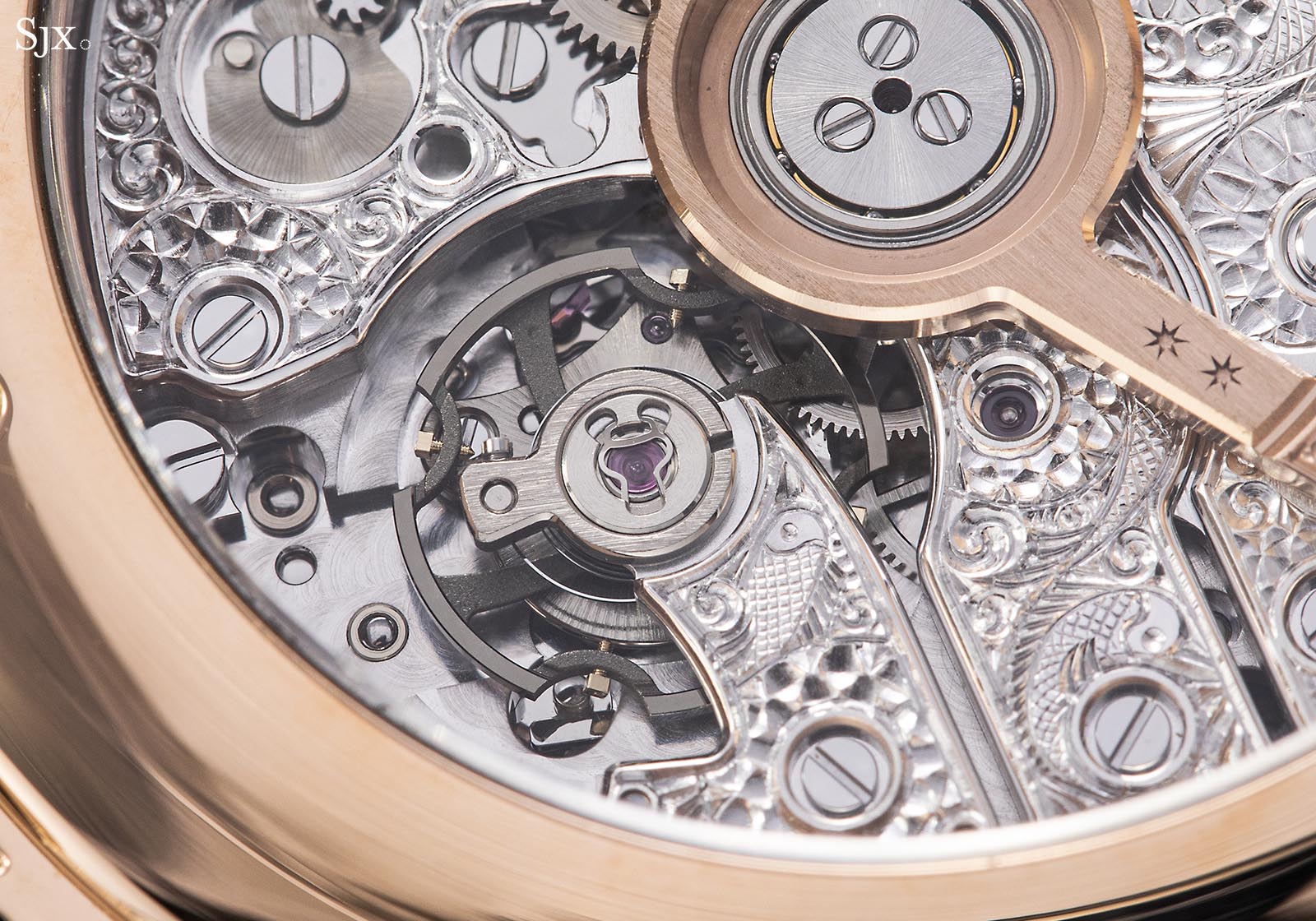 Jaquet Droz’s automata offer a heady cocktail of métiers d’art and clever horology. The Magic Lotus Automaton is no different, save for its subtlety and exceptional conceptual refinement.

The use of simple, yet unexpected and effective solutions to achieve a nuanced interaction between the automata and the motif of the watch makes it one of the most intriguing and elegant watches within the brand’s present repertoire.

As for the price of slightly over US$230,000 – allegedly supernatural devices don’t come cheap. That’s par for the course for such a watch. It’s a lot of money but fair as such things go. For the collector fascinated by mechanical toys, this is an off-the-beaten-path step up in terms of creativity and novelty as compared to the usual fare of tourbillons and perpetual calendars.