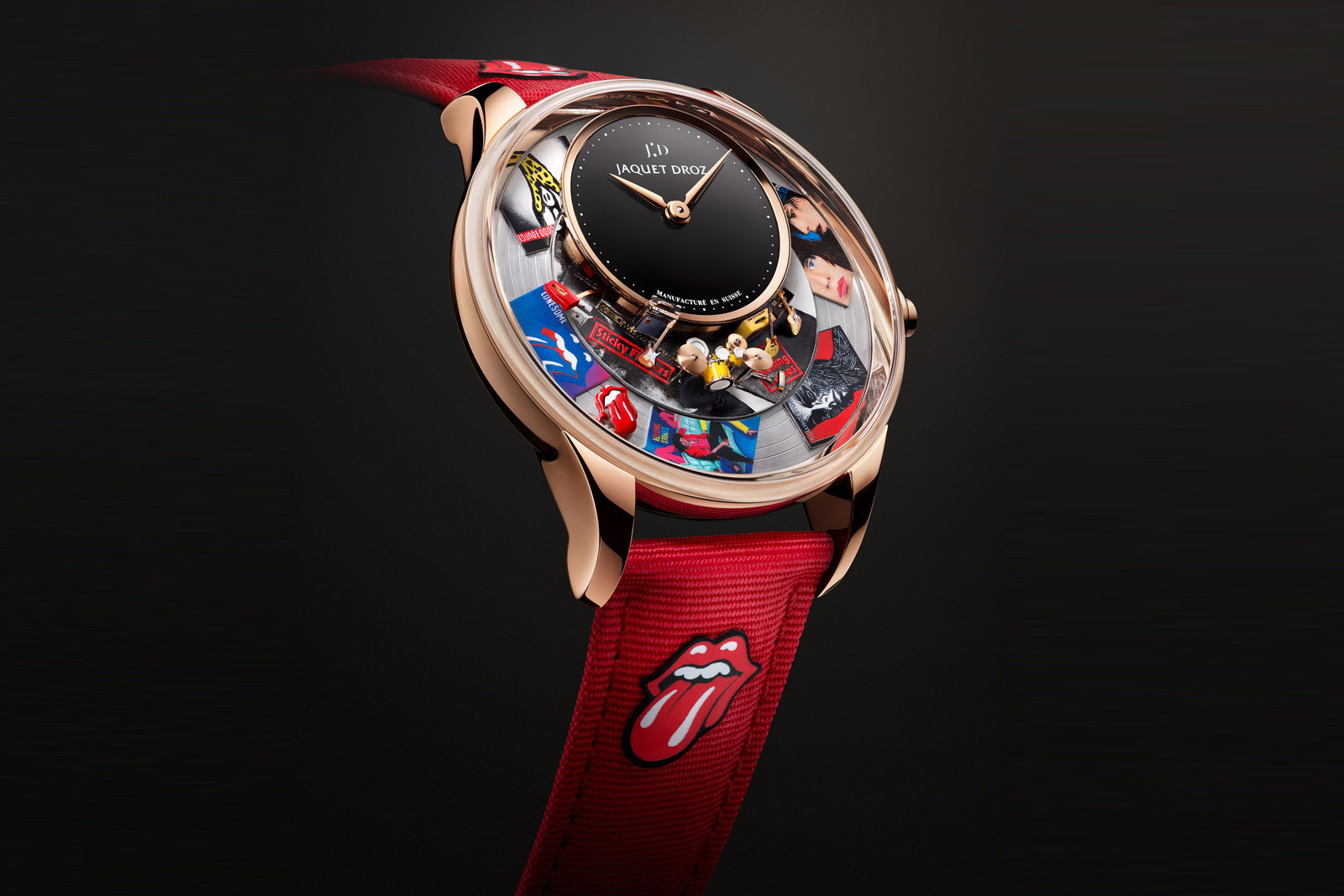 Since playing their first note in 1962, the Rolling Stones have become one of the most iconic rock bands of all time, with music that has transcended generations and left a lasting impact on pop culture. Led by the charismatic Mick Jagger, the Rolling Stones are now in their 60th year, an occasion that is being marked by Jaquet Droz with the Rolling Stones Automaton.

A signature timepiece of Jaquet Droz, the automaton watch is  traditionally decorated with themes from the natural world (and occasionally the fantasy realm of dragons and elves). But the tribute to the Rolling Stones instead reproduces their instruments and rebellious album covers on a rotating vinyl record. 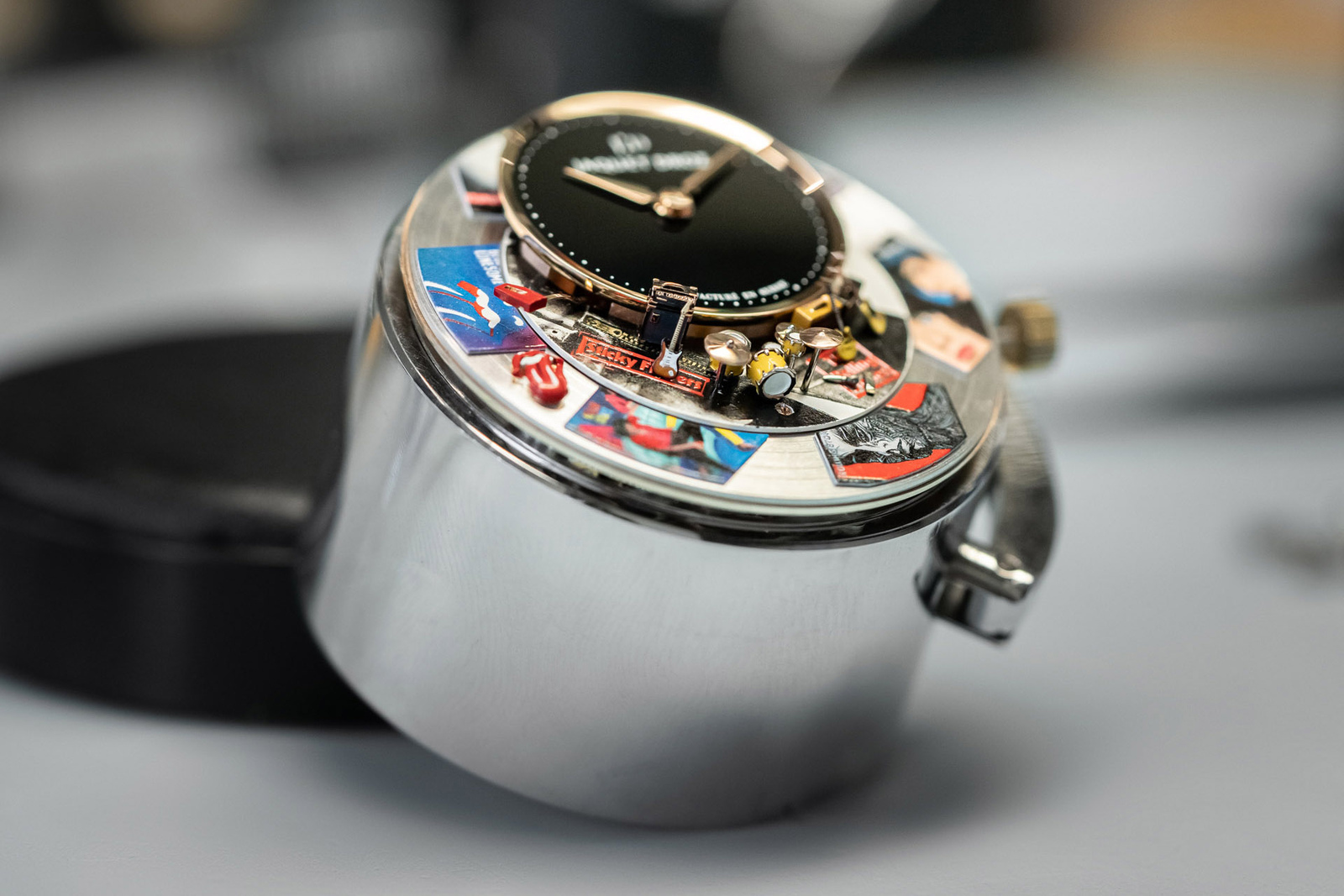 Automatons by Jaquet Droz are beguiling thanks to the attention to detail evident in each watch, most of which are made to the client’s specifications and thus unique. The Rolling Stones Automaton very much personifies that ethos but in a very different way. It combines the brand’s trademark micro-automaton with late-20th century pop culture and manages to captures the spirit of the rock icons.

Admittedly, there was some trepidation when I first saw the watch. It did seem a bit kitschy and more like a concert souvenir than a piece of mechanical art. And it departs from Jaquet Droz’s usual fare of elegant, artisanal timepieces like the Magic Lotus Automaton. But then again, the watch is clearly targeted at a very specific audience: the diehard “Stones” fan who appreciates fine watchmaking to the tune of six figures. For someone like that, what better way to pay tribute to the band? 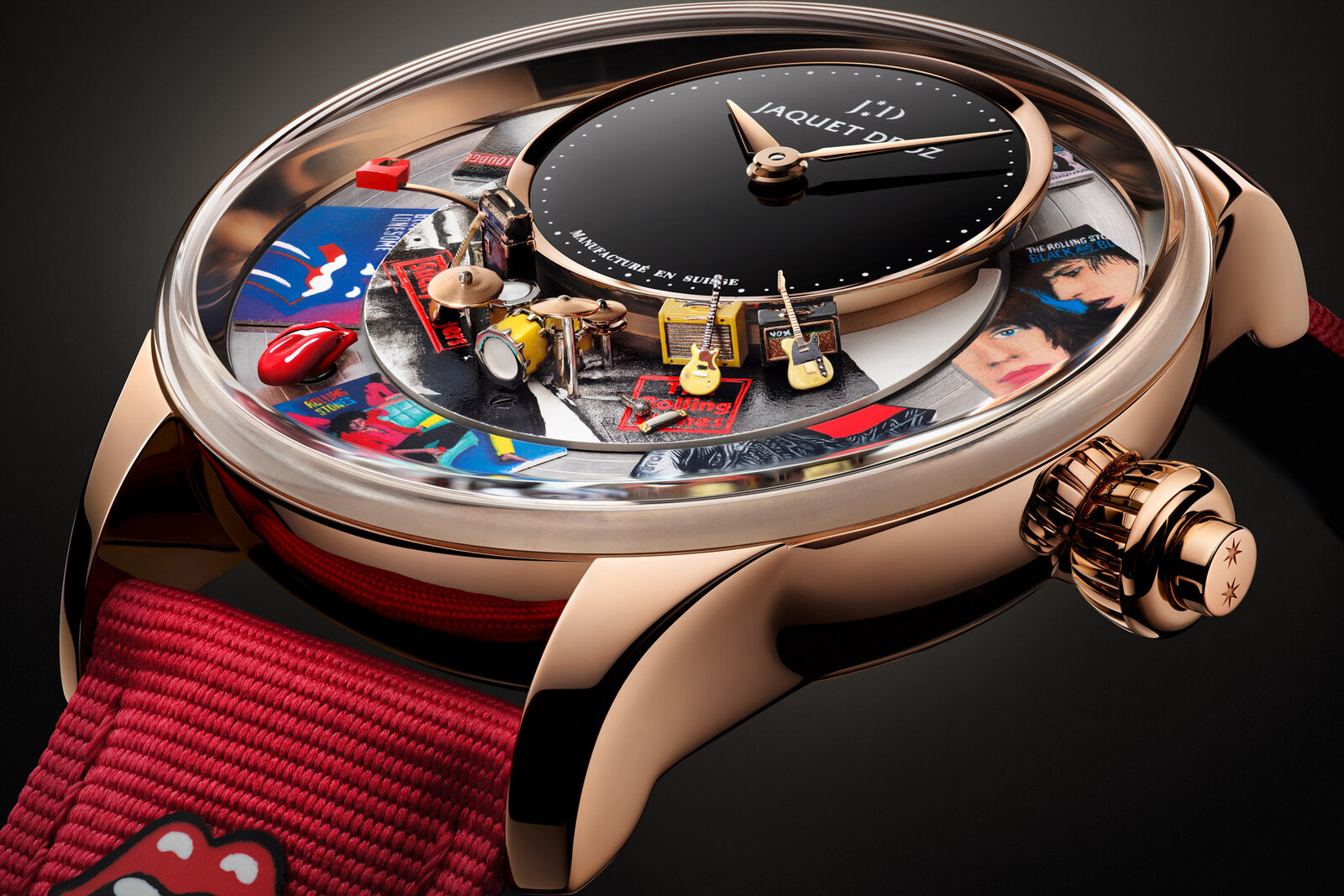 Tribute to the rock legends

The Rolling Stones Automaton is a miniature homage to the brand’s music. Each band member’s musical instruments are intricately replicated on a tiny scale, including Keith Richards’ famous five-string guitar, Mr Jagger’s harmonica and microphone, along with the minimalist drum set used by the late Charlie Watts.

And around the mini instruments are the band’s album covers on a vinyl record, which can be customised by the buyer. Jaquet Droz offers a selection of 23 albums, including chart toppers like Sticky Fingers and Exile on Main St.

The vinyl record is the automaton and meant to evoke a record player. When the automaton is activated by the pusher in the crown, the vinyl disc will spin for at least 30 seconds. And as the disc revolves, the red tongue emblem of the band sways up and down at nine o’clock. On full wind, the automaton can be activated eight times before requiring winding. 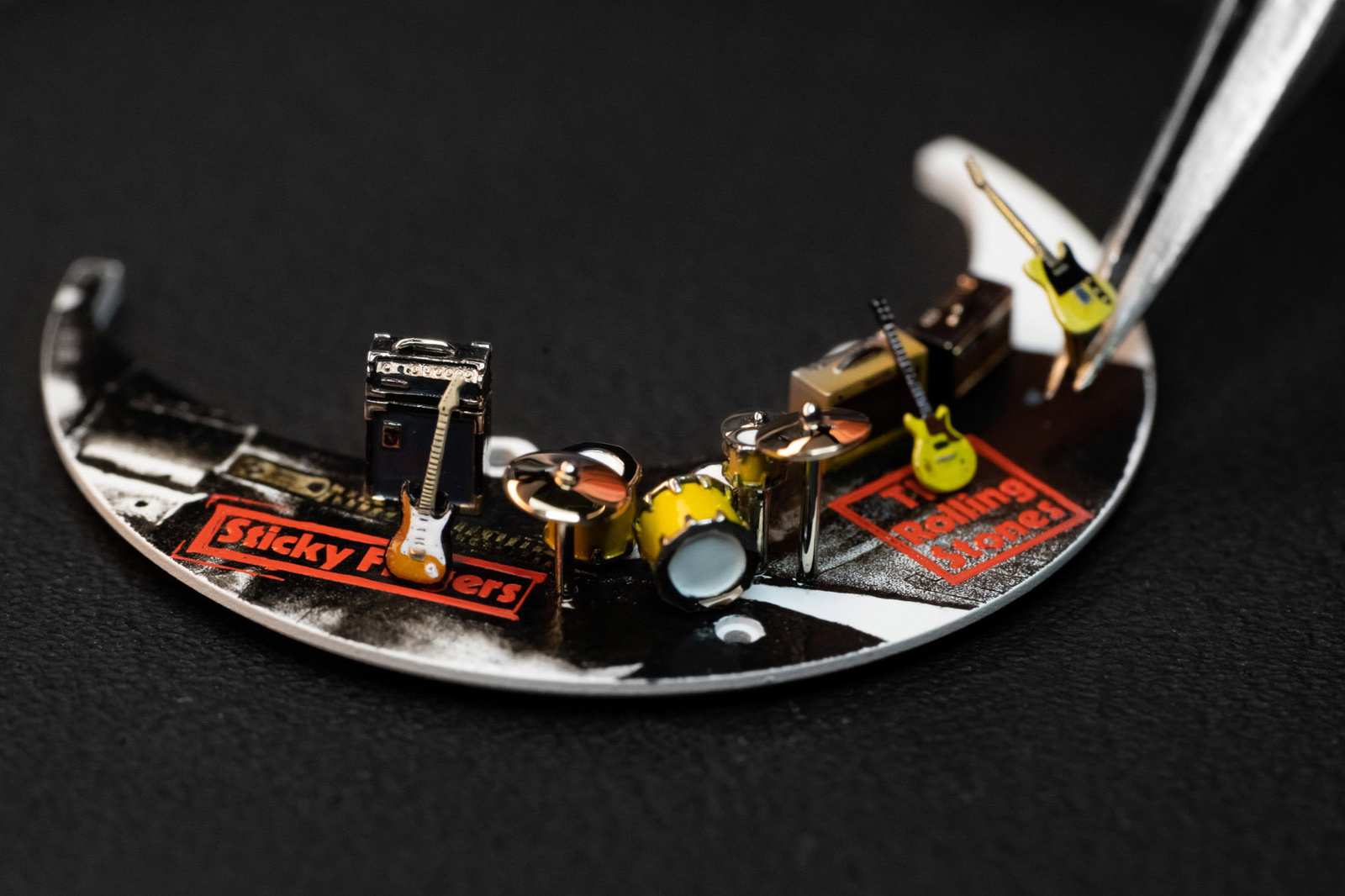 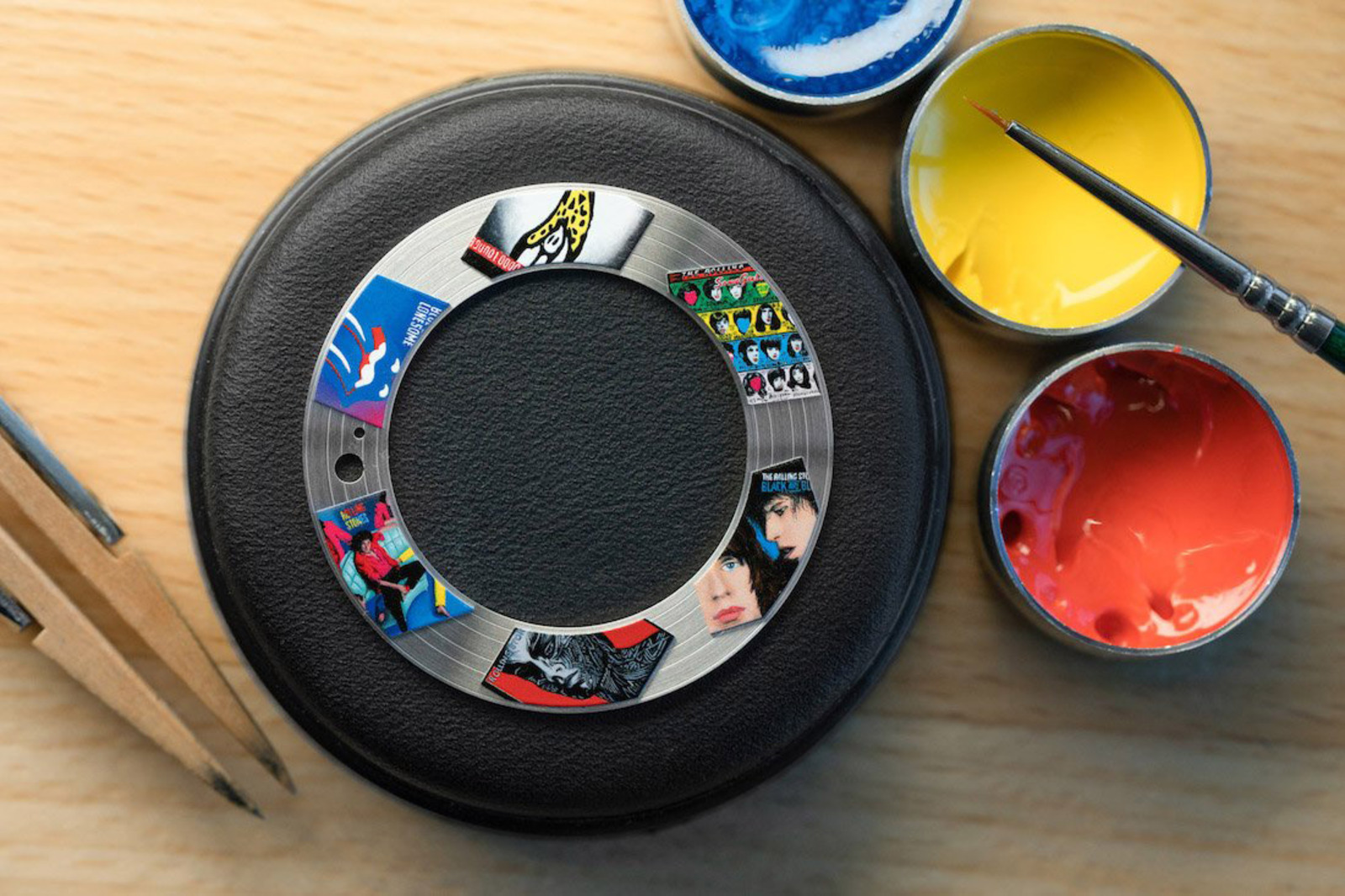 While the Rolling Stones motif sets this apart from the typical Jaquet Droz automaton, the watch is otherwise identical in terms of dimensions and mechanics. So to describe it as large is an understatement. At 43 mm in diameter and 16.96 mm high, it makes a statement on the wrist. But the size contrasts with the minute artistry on the dial, which is literally a rock concert sitting on the wrist.

At the heart of the Rolling Stones Automaton lies the manual-wind cal. 2653 AT2, a variant of the movement that powers the brand’s other automaton watches. Each timepiece will feature an engraved rotor that bears the name of a Rolling Stones album, as well as the year and place it was first recorded. 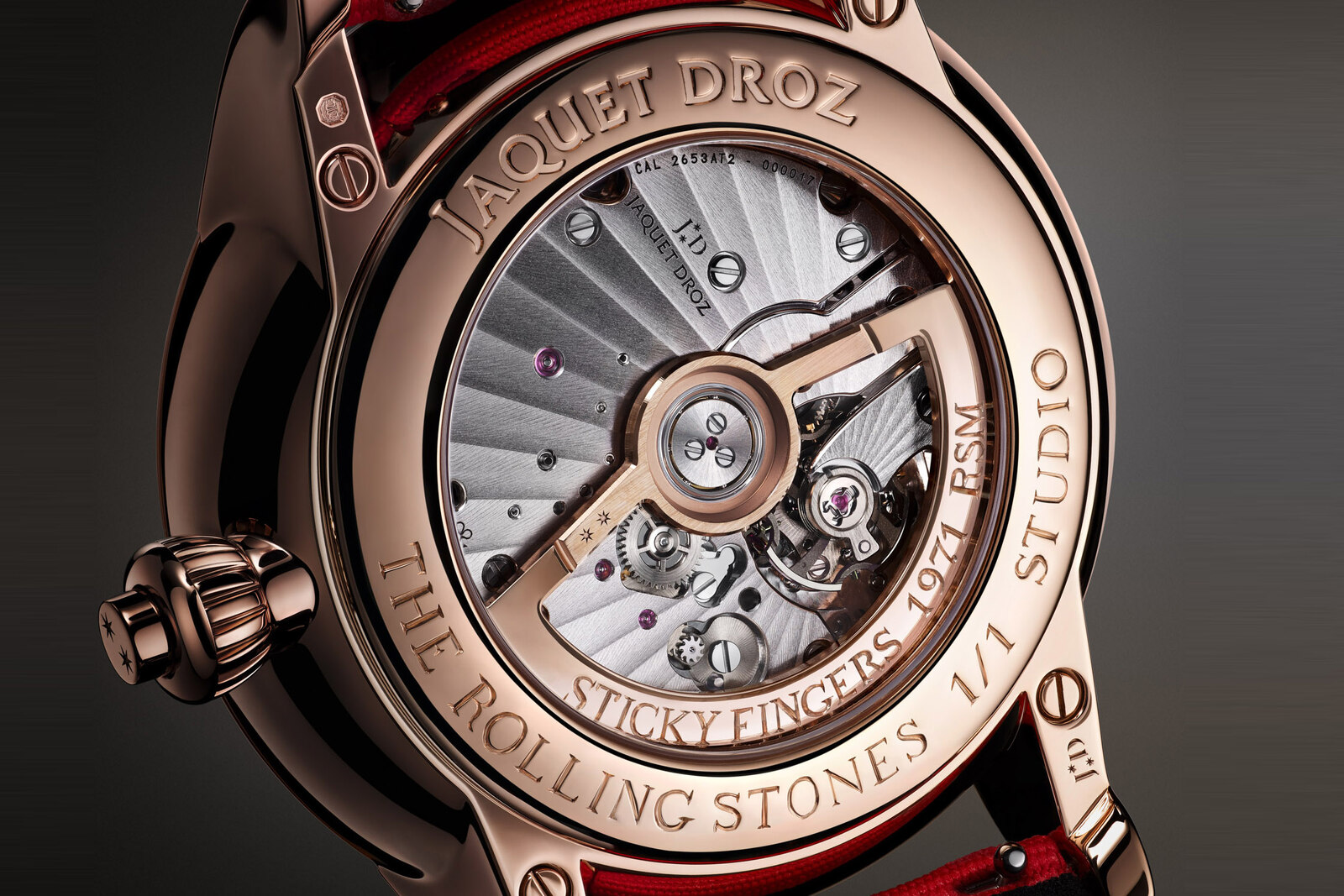 Limited edition: Each made according to client’s specifications
Availability: From authorised retailers and boutiques
Price: Unavailable

From the man who illustrated The Lord of the Rings.