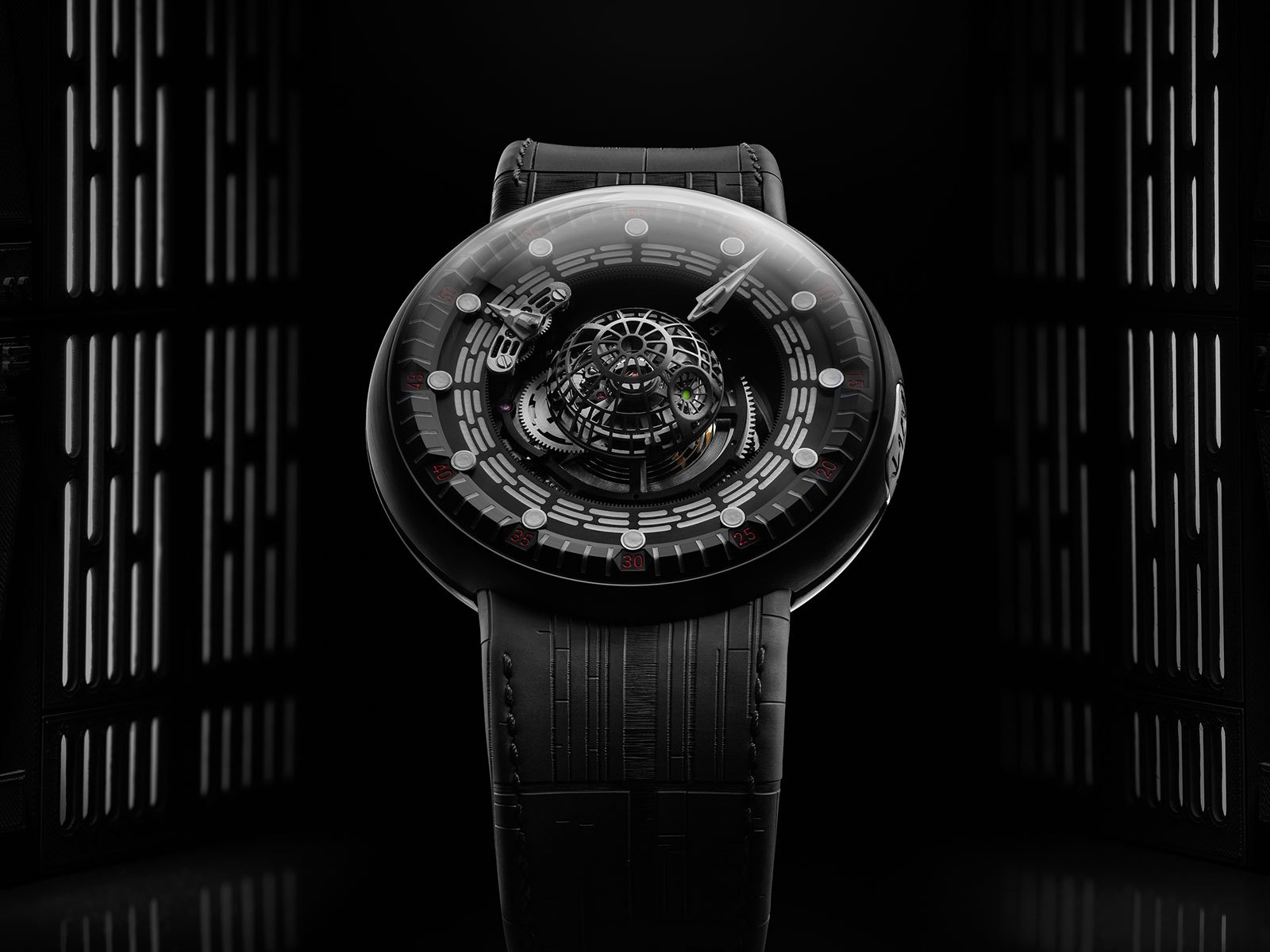 A startup that “specialises in creating innovative and exclusive art objects”, Kross Studio made its debut with the Batmobile clock, and has now turned to an even grander piece of pop culture for its first wristwatch. Modelled on the planetary genocide engine from Star Wars, the Death Star Tourbillon has a skeletonised globe on the dial that’s actually the cage of its central tourbillon.

Created in collaboration with Lucasfilm, the Disney subsidiary that owns the movie franchise, the watch is actually part of the Death Star Ultimate Collector Set that includes a kyber crystal prop from Rogue One: A Star Wars Story, the 2016 film about the conception (and sabotage) of the original Death Star. Together, the two are very much something for the diehard Star Wars fan who happens to like watches. 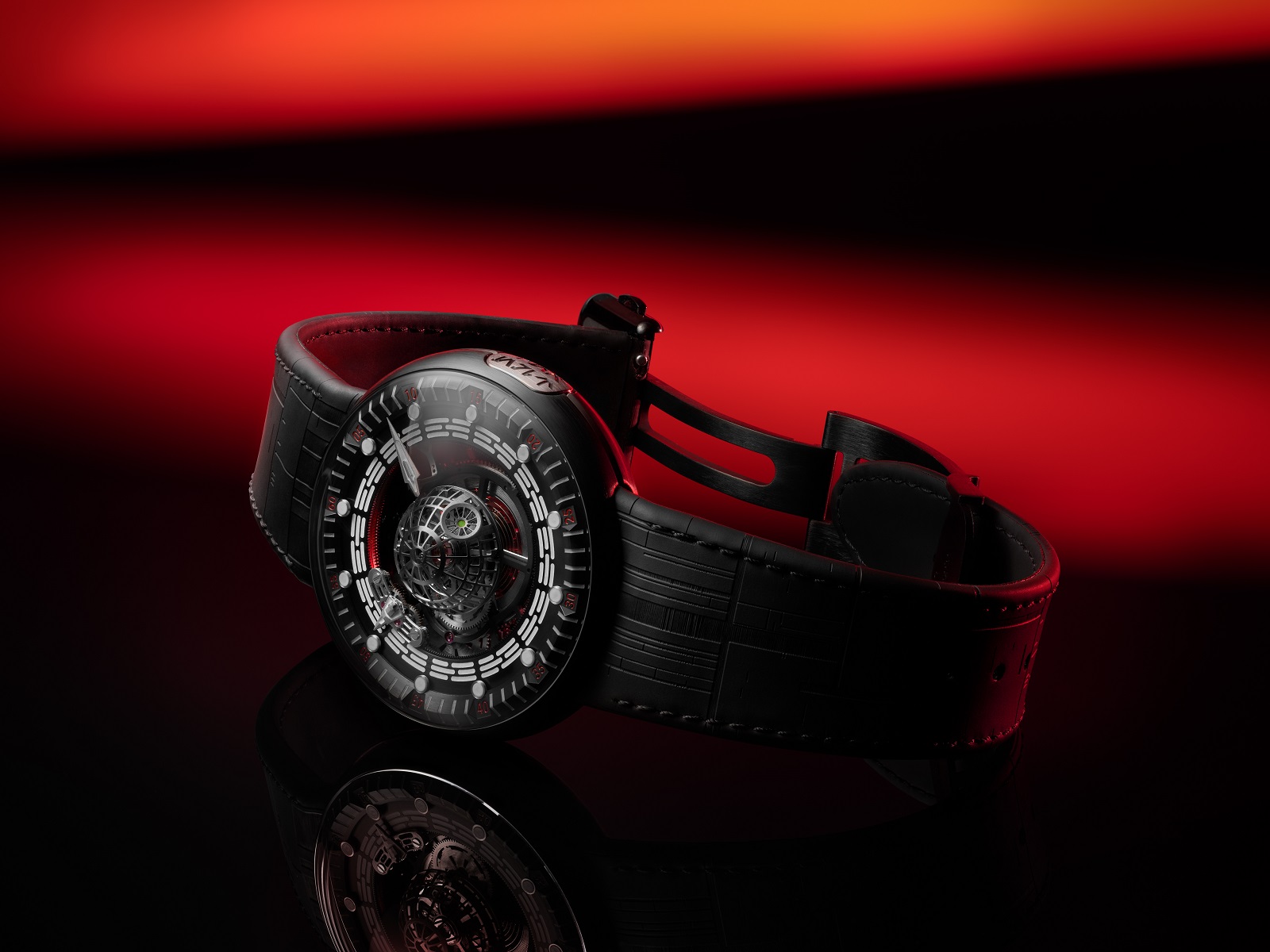 If Kross Studio’ quirky tilt towards pop culture feels similar, that’s because several of its founders are alumni of RJ-Romain Jerome, the defunct brand known for its Hello Kitty and Pokemon watches, including Marco Tedeschi, who was RJ’s chief executive prior to its demise, and Sergio Silva, the former head Romain Jerome’s manufacture.

And the Romain Jerome connection is integral to the watch as well. Specifically, the idea for the central-tourbillon movement was actually conceived by Mr Tedeschi while he was studying micro-technical engineering at the École Technique de la Vallée de Joux (ETVJ). He later refined the idea and patented it in 2006. And in 2019, Mr Tedeschi realised the idea with the Romain Jerome Spider-Man Tourbillon, but the brand went bust before the watch entered production. Now an improved version of the same idea is the centrepiece of the Death Star Tourbillon. 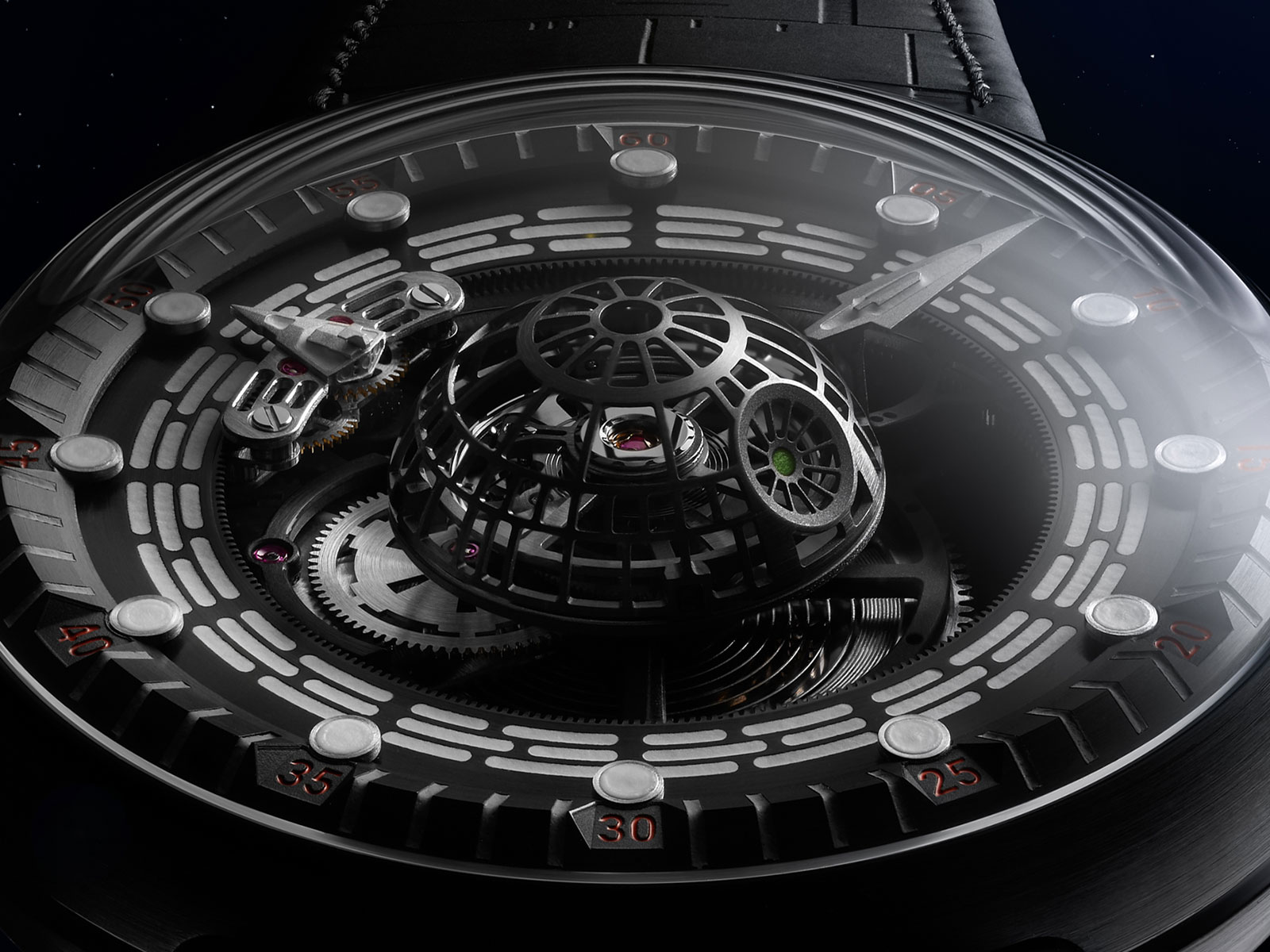 Though high-end Star Wars watches have been done in the past, the Death Star Tourbillon is by far the most complicated to date. Despite its fictional inspiration, the watch is very much serious horology.

Developed in-house by Kross Studio, the movement is surprisingly evocative of Star Wars. The dome-shaped tourbillon cage is instantly recognisable as the Death Star. Combined with a litany of Star Wars-inspired elements, the Death Star Tourbillon is a sharply-executed tribute to the films that will no doubt appeal to Star Wars fans, while having enough horological content to please a technically-minded watch enthusiast.

But it is an expensive watch, with a hefty US$150,000 price tag – its main sticking point. While that’s within the ballpark for an unusual tourbillon, it’s a big ask for a newish brand. 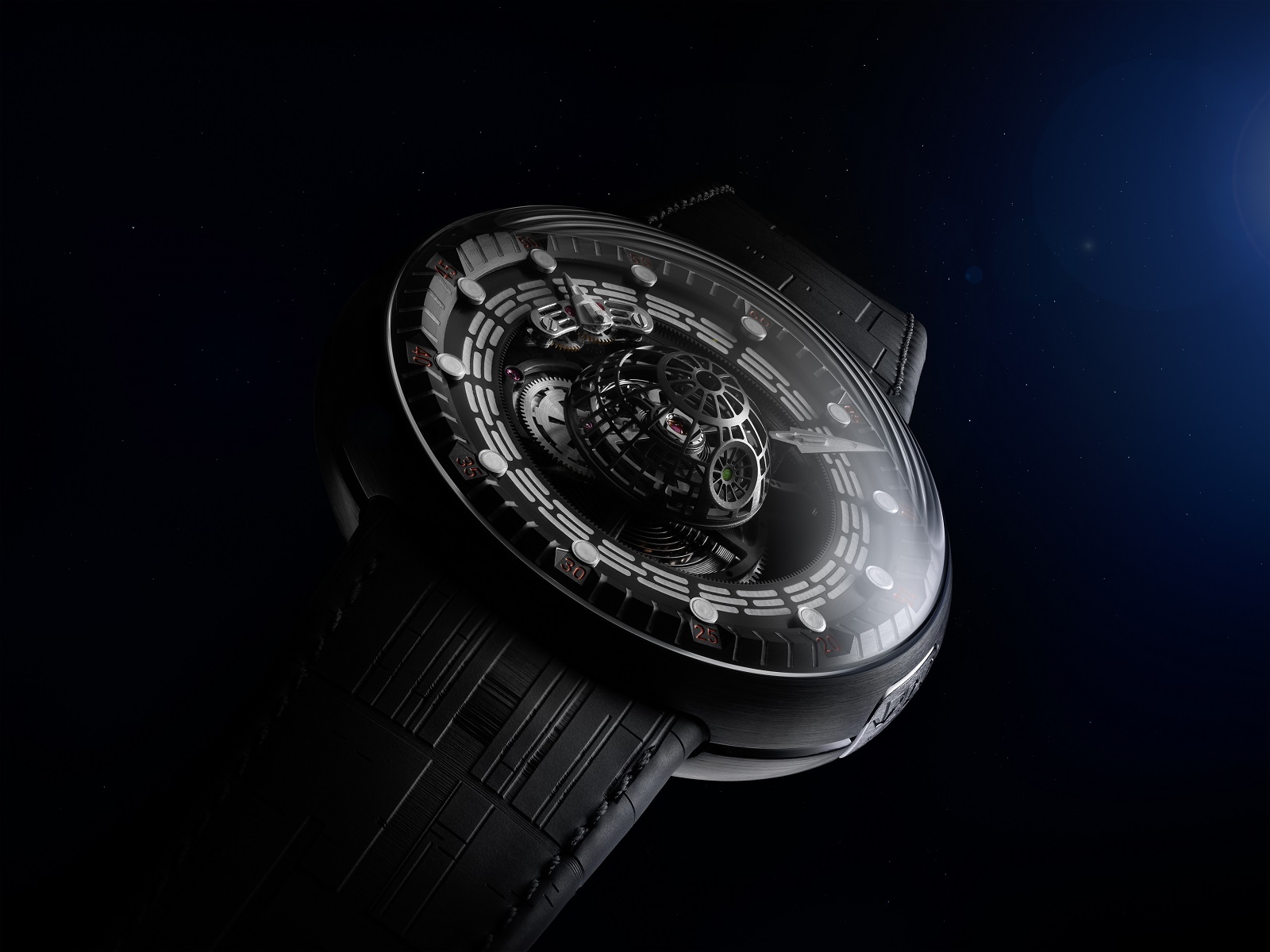 The central tourbillon has a large, domed cage designed to mimic the northern hemisphere of the Death Star, right down to the kyber crystal-powered laser cannon capable of destroying an entire planet.

In addition, the hour hand of the watch is shaped like an Imperial-Class Star Destroyer – the quintessential vehicle for the Empire’s projection of power – while the minute hand is modelled on a Super Star Destroyer, one of which was Darth Vader’s flagship. The hour ring features Super-Luminova that glows a bright blue – reminiscent of the control panels in Imperial spaceships. 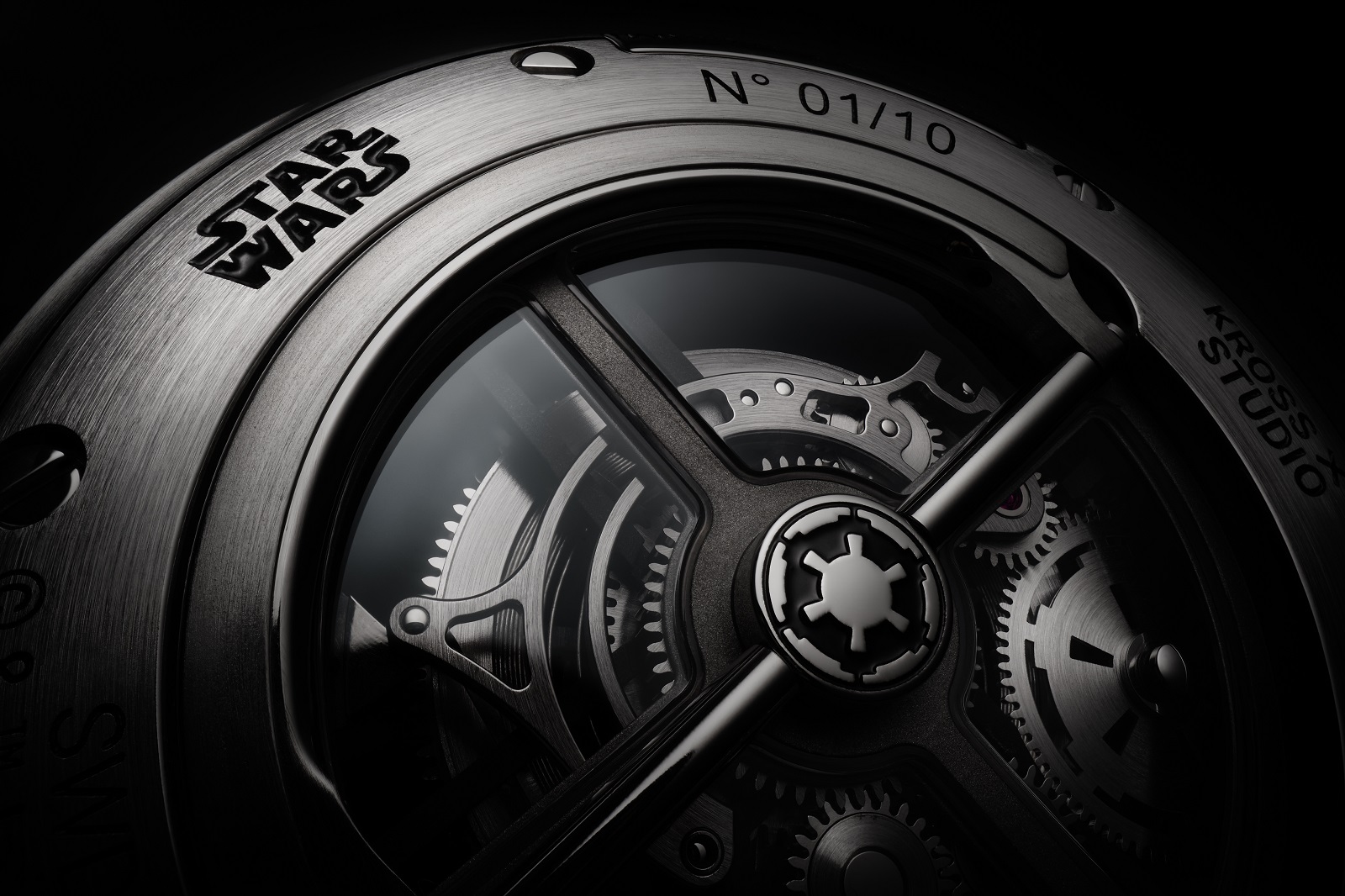 The titanium case is a large 45 mm, and covered with black diamond-like carbon (DLC) coating. A recessed button on the case – engraved with “Time set” and “Push to release” in the fictional Aurebesh script from the film – releases the D-ring crown that’s embedded in the case back, allowing for winding and setting via the ring.

Inside is the MKS-7000, a manual-winding movement that boasts five days of power reserve, as well as the central tourbillon.

The Death Star Ultimate Collector Set also includes a kyber crystal prop from Rogue One: A Stars Wars Story. Both the watch and crystal are packaged in a tube that replicates the kyber crystal containers seen in the films. 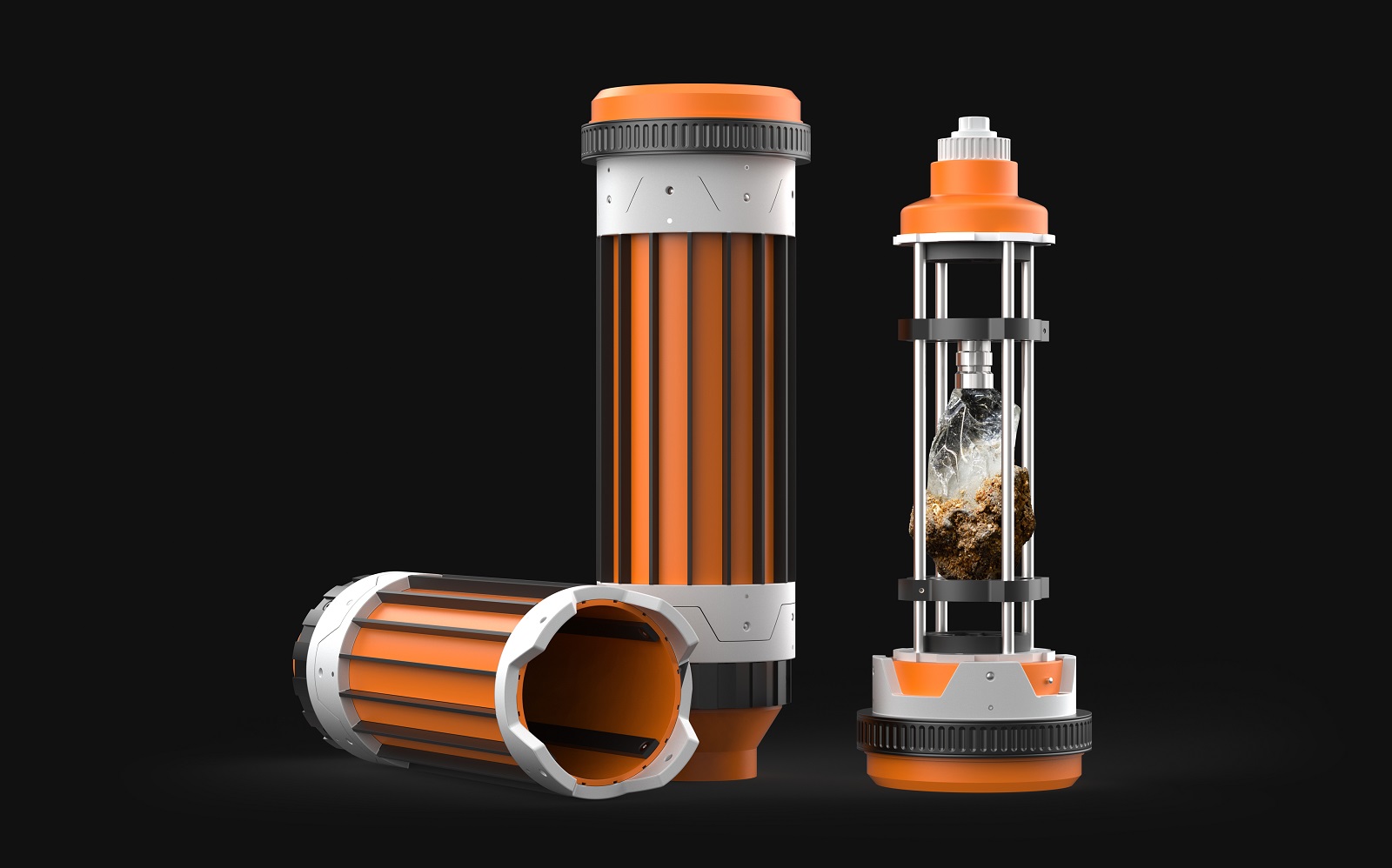 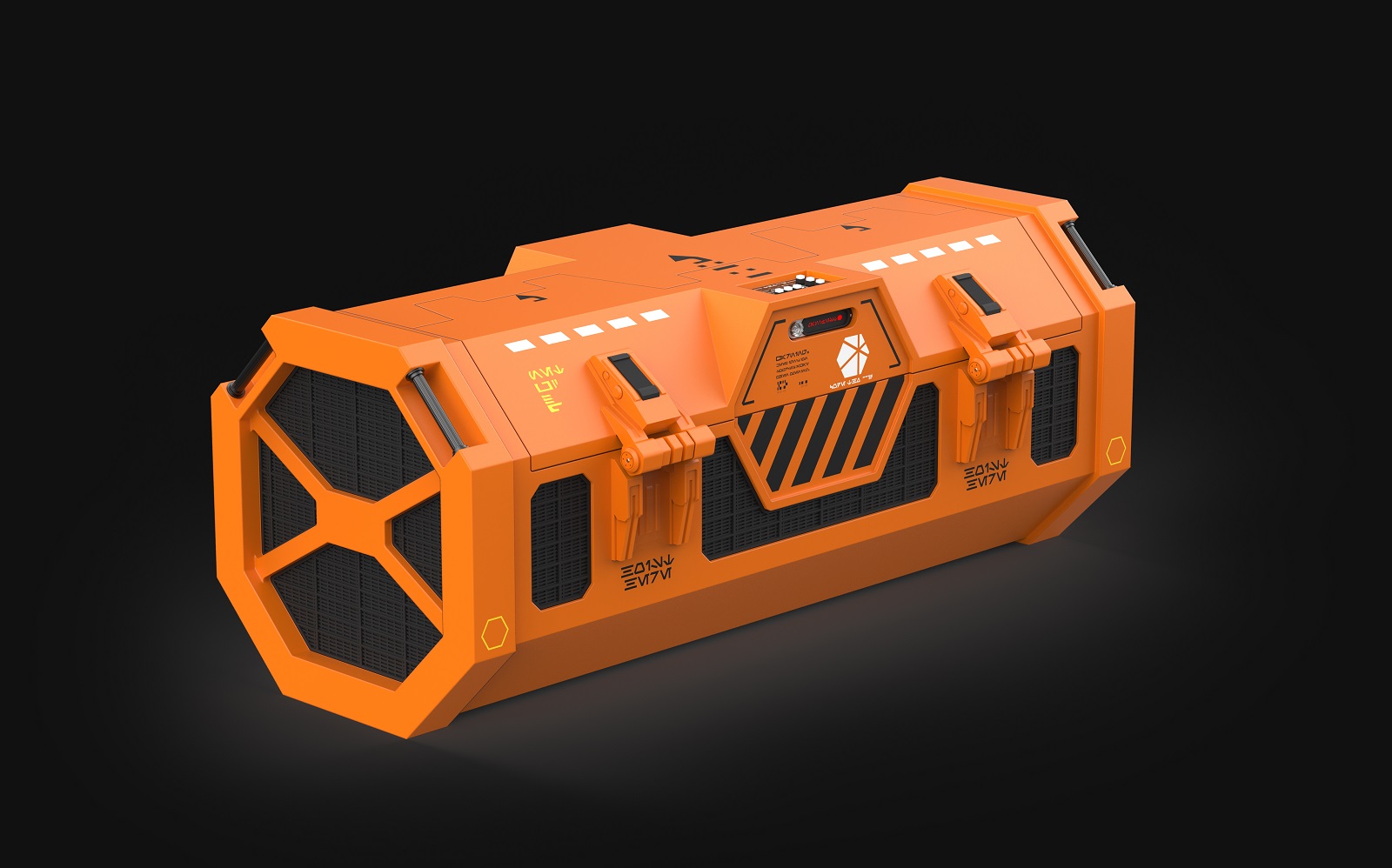 The watch box shaped like a kyber crystal container

The iconic Batmobile returns with a 30-day movement.