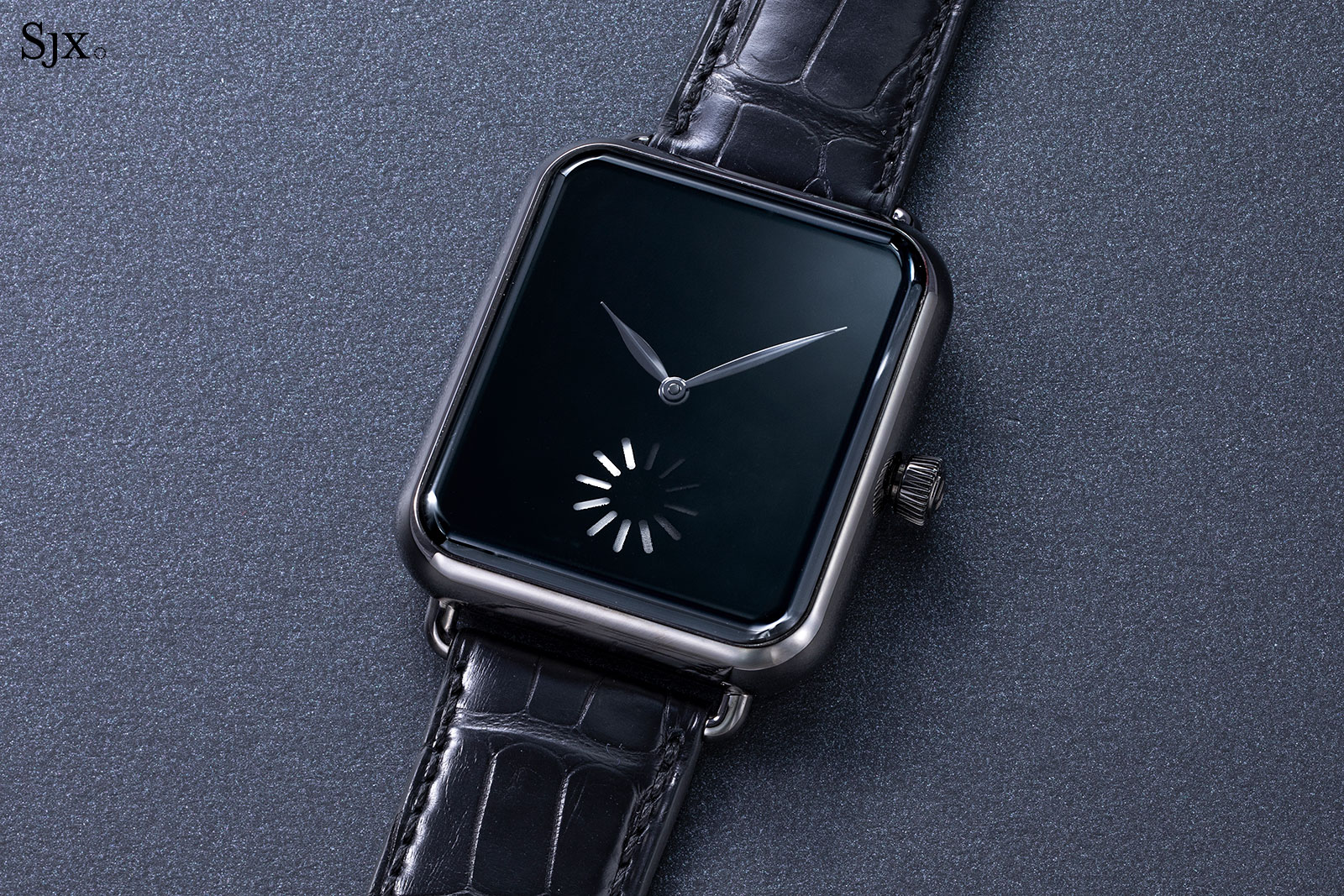 The brand of humour peculiar to H. Moser & Cie. has been expressed in many ways – some of which resulted in legal blowback – but the best known was always the Swiss Alp Watch of 2016. Essentially a high-end mechanical wristwatch that resembles the Apple Watch, the oblong timepiece is now taking its curtain call with a final, 50-piece run.

Featured an endlessly black dial coated in Vantablack – the blackest of black substance that absorbs almost all light – the Swiss Alp Watch Final Upgrade continues the entertaining aesthetic of its predecessors, with a little added humour in the form of a subsidiary seconds that takes the form of the spinning “loading” indicator found in Apple products.

Derived from an earlier iteration of the Swiss Alp Watch with an all-black, “sleep” dial, the final edition is a droll watch that’s easily the most amusing of the series.

Though the Swiss Alp Watch has the same form as the Apple Watch, it is notably larger. Despite being a truly minimalist watch, it does sit large and chunky on the wrist. Legibility is surprisingly excellent despite the near-monochromatic dial, as the polished, dark-grey hands have good contrast against the Vantablack dial. 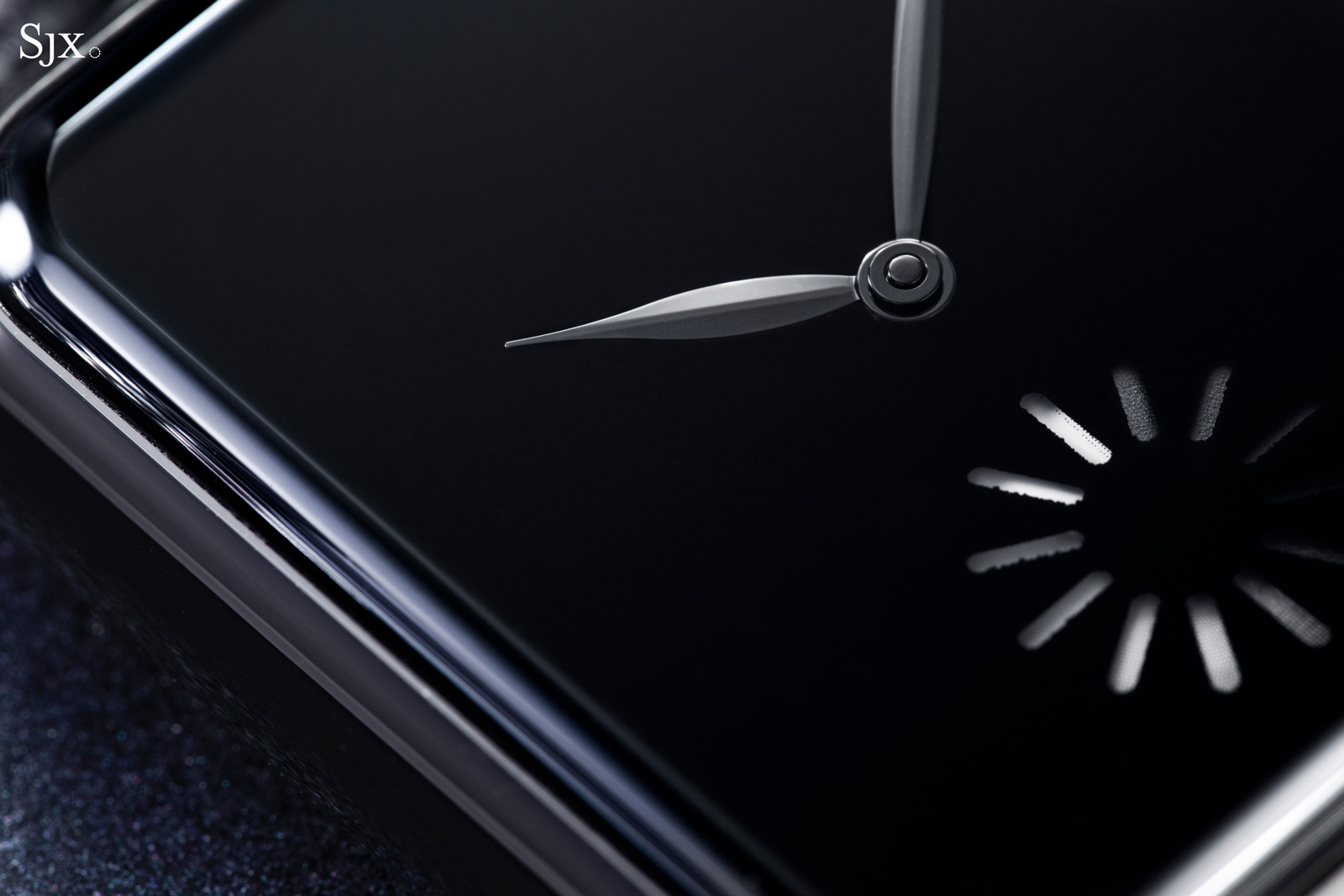 But the Swiss Alp Watch is no horological joke. In fact, it is equipped with one of Moser’s top end movements, the HMC 324. It’s a rare movement Moser has used only in one other model that didn’t sell very well.

Unusual for being tonneau shaped, the HMC 324 boasts a four-day power reserve, along with the brand’s interchangeable escapement module that can be swapped during servicing. And it is also top spec in terms of timekeeping features. Not only does the HMC 324 have the in-house Straumann overcoil hairspring, it is also kitted out with an escape wheel and pallet lever in hardened solid gold. 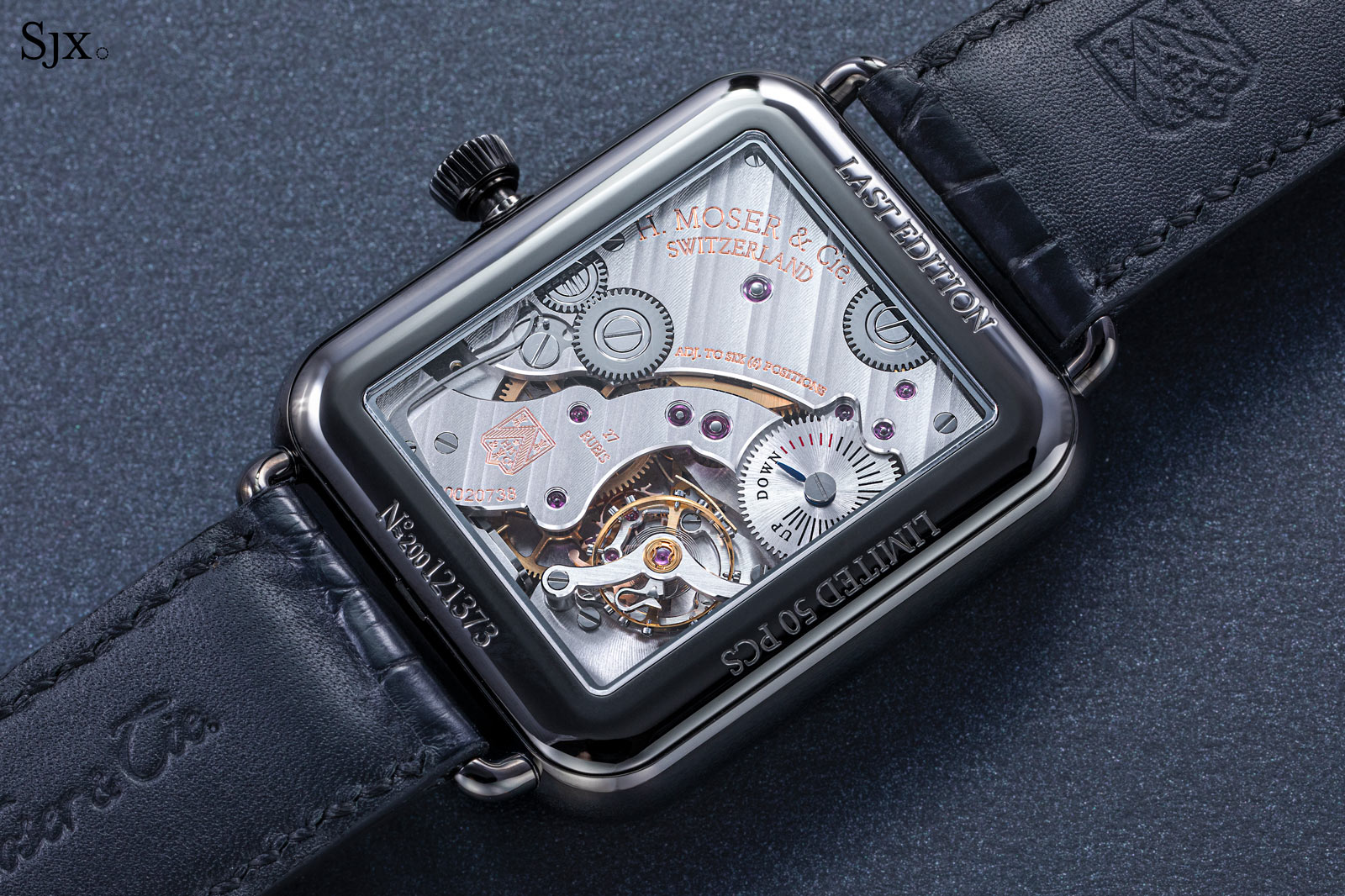 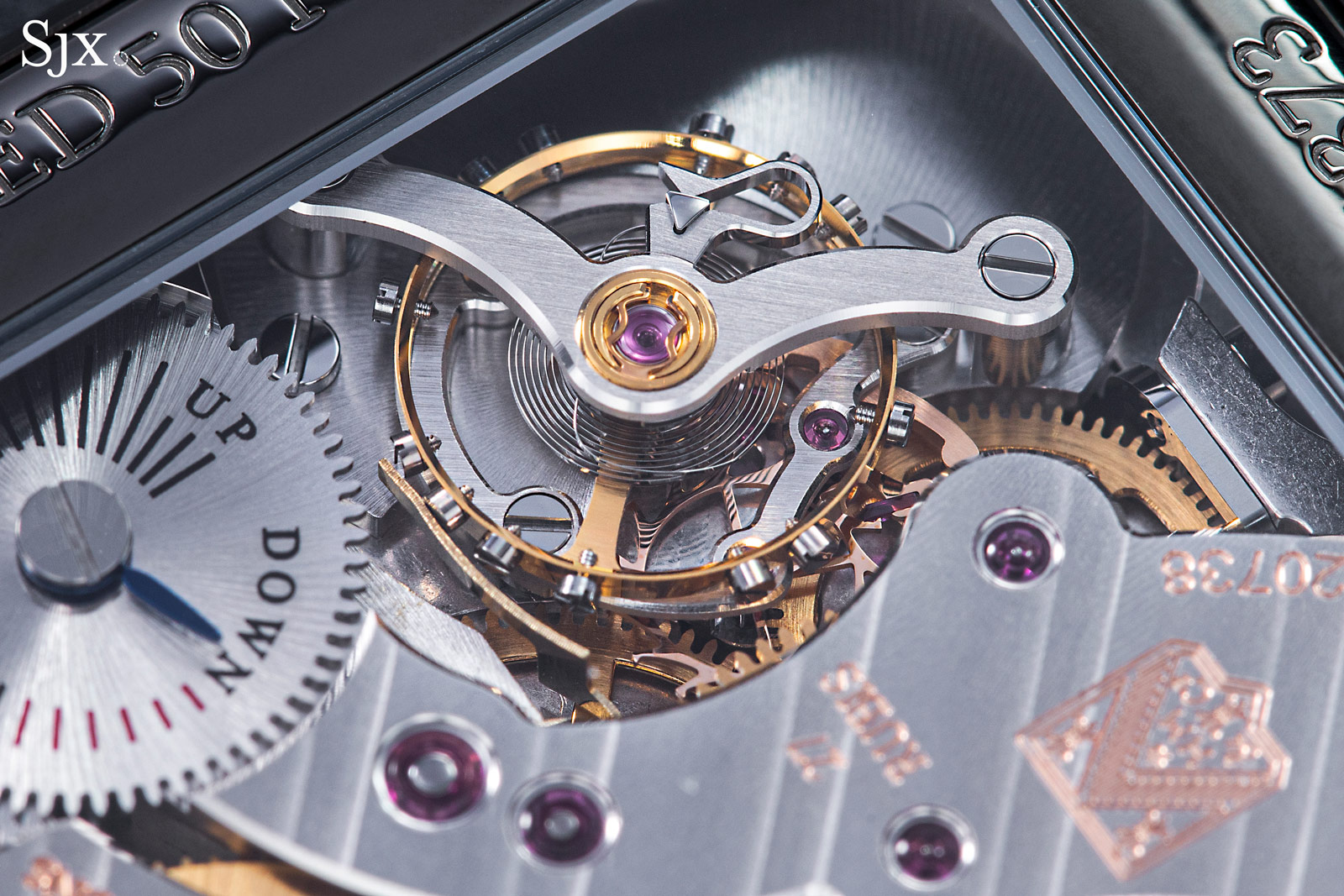 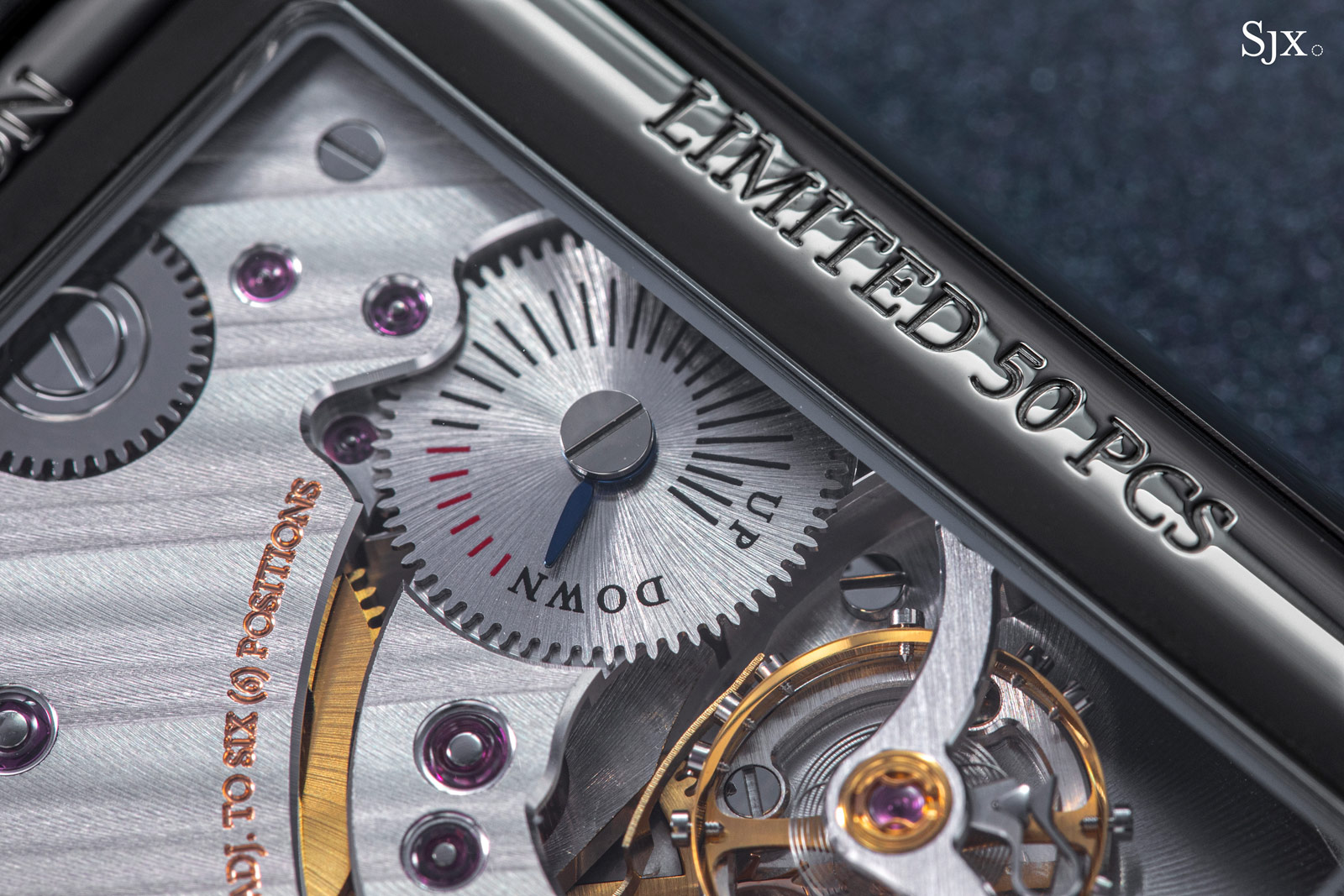 The only shortcoming in the design is the activity-indicator seconds hand, which by necessity makes one revolution a minute. Its rate of travel isn’t quite fast enough to be visually compelling, although that doesn’t take away from the clever design.

Though the watch is ostensibly humorous because of its reference to a smartwatch that’s helping to eradicate the lowest end of Swiss watchmaking, it is also ironic because the Swiss Alp Watch is very much a traditional Swiss watch – expensive haute horlogerie for the enthusiast.

The Swiss Alp Watch Final Upgrade costs US$30,800, which seems like a lot for a steel watch that’s a smart joke. But it is fair enough considering the excellent HMC 324 movement, as well as the Vantablack dial, which is surprisingly expensive to fabricate due to the fragile nature of the black coating.

In size and shape the new Swiss Alp Watch is identical to its predecessors. It looks very much like an extra-large Apple Watch, enough that it’s difficult to distinguish between the two at a distance. The thick crystal is bevelled on its edge, as on the Apple Watch

The 38.2 mm width and 44 mm length of the case don’t seem much on paper but it’s large watch that feels thicker than it measures due to the shape of the case. The case is 10.5 mm high, which is less than a typical chronograph, but it feels thick, in part due to the small and low-set lugs.

The case is entirely polished steel that’s been coated with black diamond-like carbon (DLC), giving it a glossy, dark grey finish. It’s a simple affair that’s well done but not especially complex, which is reasonable since the key bits of the watch are the dial and movement. 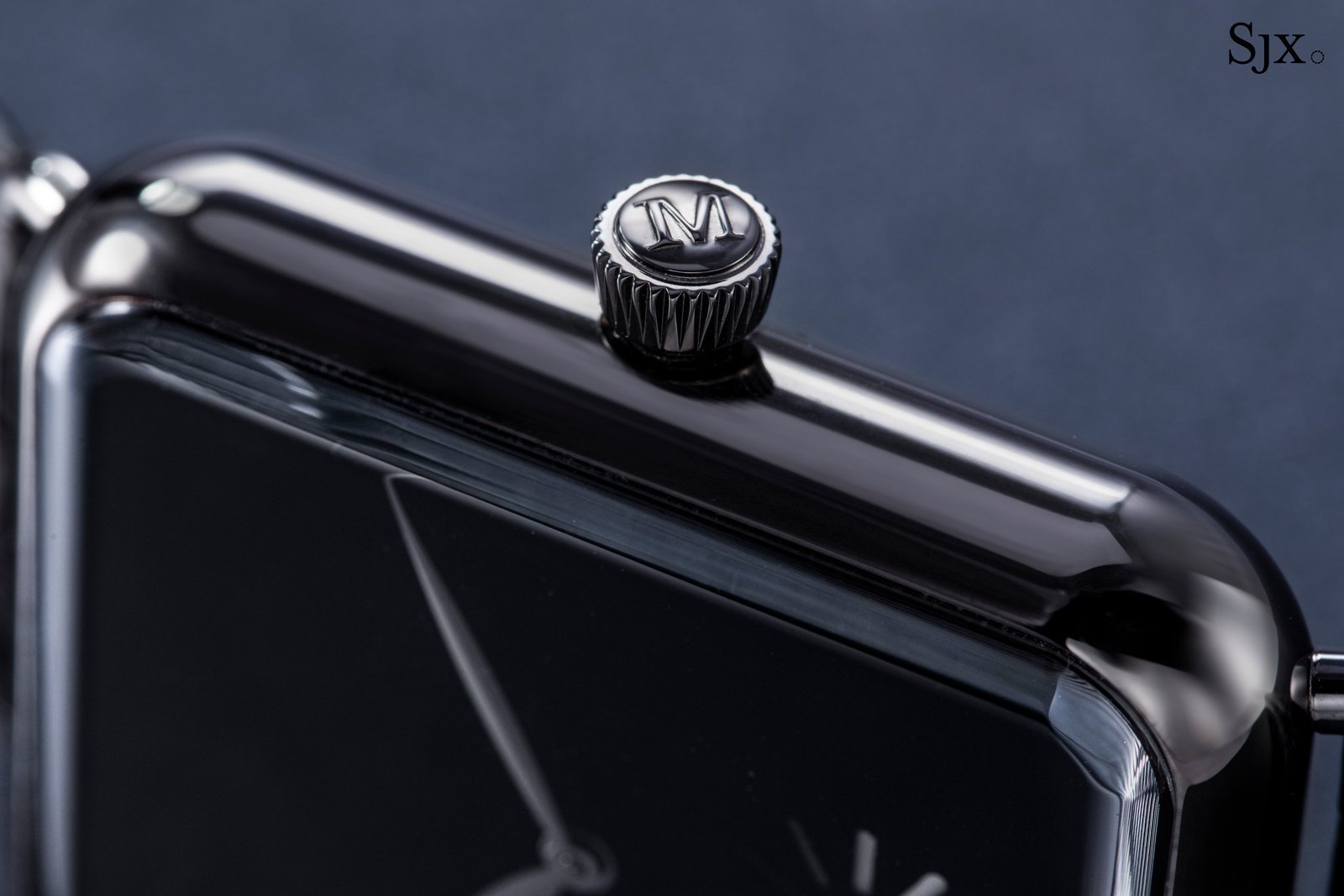 Vantablack is one of several ultra-dark substances, and not even the blackest, but it is the best known, having been licensed to sculptor Anish Kapoor and used to coat an entire BMW. Moser has used the substance for several models in the past, ranging from a moon phase to a tourbillon.

Produced by British nanotechnology outfit Surrey NanoSystems, Vantablack is made up of millions of carbon nanotubes, which are akin to tiny hairs that trap light, allowing it to absorb 99.965% of ambient light in certain conditions. A Vantablack surface is akin to extremely fine fur, leaving it delicate enough that it cannot be handled like a conventional dial – simply brushing a finger across the surface permanently damages it. As a result, the Swiss Alp Watch has to assembled with extreme care in a semi-clean room, so as to ensure the dial is free of even the tiniest bit of dust. In the metal, and in practically any lighting, the dial is an incredibly deep black up close. Across a room the colour – or lack of colour – is not discernible. But bring it to arm’s length and the dial reveals its peculiar nature of being black enough to seem as if there’s nothing there.

In fact, the only thing that gets in the way of the black finish is the crystal, which reflects light at certain angles, making it clear that there is actually something making up the dial. Simple but effective, the constant seconds is a source of constant amusement, although it moves as a seconds hand, which makes it noticeably slower than an actual “loading” indicator. Rejigging the gearing to boost its speed would have been ideal, though that was likely not feasible from a technical perspective, at least within reasonable cost.

The nature of Vantablack, however, means that the narrow apertures for the seconds are fuzzy around their edges. Made of a clear material, probably sapphire crystal, the dial is coated in Vantablack except for the apertures, resulting in the fuzzy borders. The uneven edges are not apparent without magnification, so it is not a shortcoming per se, but it is there. Though classical, the HMC 324 inside has a distinctive aesthetic thanks to a handful of details, namely the alternating wide and narrow Geneva stripes as well as the moustache-shaped balance bridge.

Originally developed for the Henry, a little loved wristwatch in a cushion-shaped case, the HMC 324 is an impressive movement on several levels. It is derived from the round HMC 321, but the HMC 324 is a form movement with a gentle tonneau shape. Though they’re simply arranged, the bridges have an elegant flow about them, along with a power reserve indicator on the going train bridge. And though having a large, single mainspring, it still has enough juice for a longish, four-day power reserve. The movement’s key feature is the interchangeable escapement, once a signature feature on all Moser movements but now only found on the brand’s high-end calibres. It was conceived to shorten servicing lead times, because the escapement can be swapped for a freshly lubricated and regulated module during an overhaul.

Also proprietary to Moser is the Straumann hairspring produced by its sister company Precision Engineering and named after the dental engineering company that once owned Moser. Here it’s formed into a Breguet overcoil, as is traditional in high-end movements.

Like other top-of-the-line Moser movements, the HMC 324 also features a solid-gold escape wheel and pallet lever, making it one of the few, if not the only, wristwatch in the current line up with a gold escapement. The solid-gold escapement is admittedly identical in terms of function, but it is an extra that elevates the movement a little. The solid gold escapement parts are visible just below the screwed balance, which is attached to a Breguet overcoil hairspring A small lever to the left of the balance wheel frees the interchangeable escapement, which slides out from the base plate

While the movement is a step up from the calibres found in the brand’s more affordable watches, the decoration is similar. It is cleanly executed, mostly by machine but with a handful of hand-applied details.

All of its elements are attended to correct, including those that are less obvious. These include the chamfered arms of the gears as well as the bevelled slots and edges of screws. Even the escape wheel bridge below the balance wheel has bevelled edges and countersunk holes, albeit edges that have been milled by machine. The Swiss Alp Watch Final Upgrade is a clever and amusing watch that reflects Moser’s irreverent approach to watchmaking, but also its technical competence. Though the watch is pricey, it’s saved by the high-spec and in-house movement.

While the novelty of the Apple Watch resemblance might fade over time, the movement’s appeal will remain, so it will be a shame if it disappears after the Swiss Alp Watch exits the catalogue.