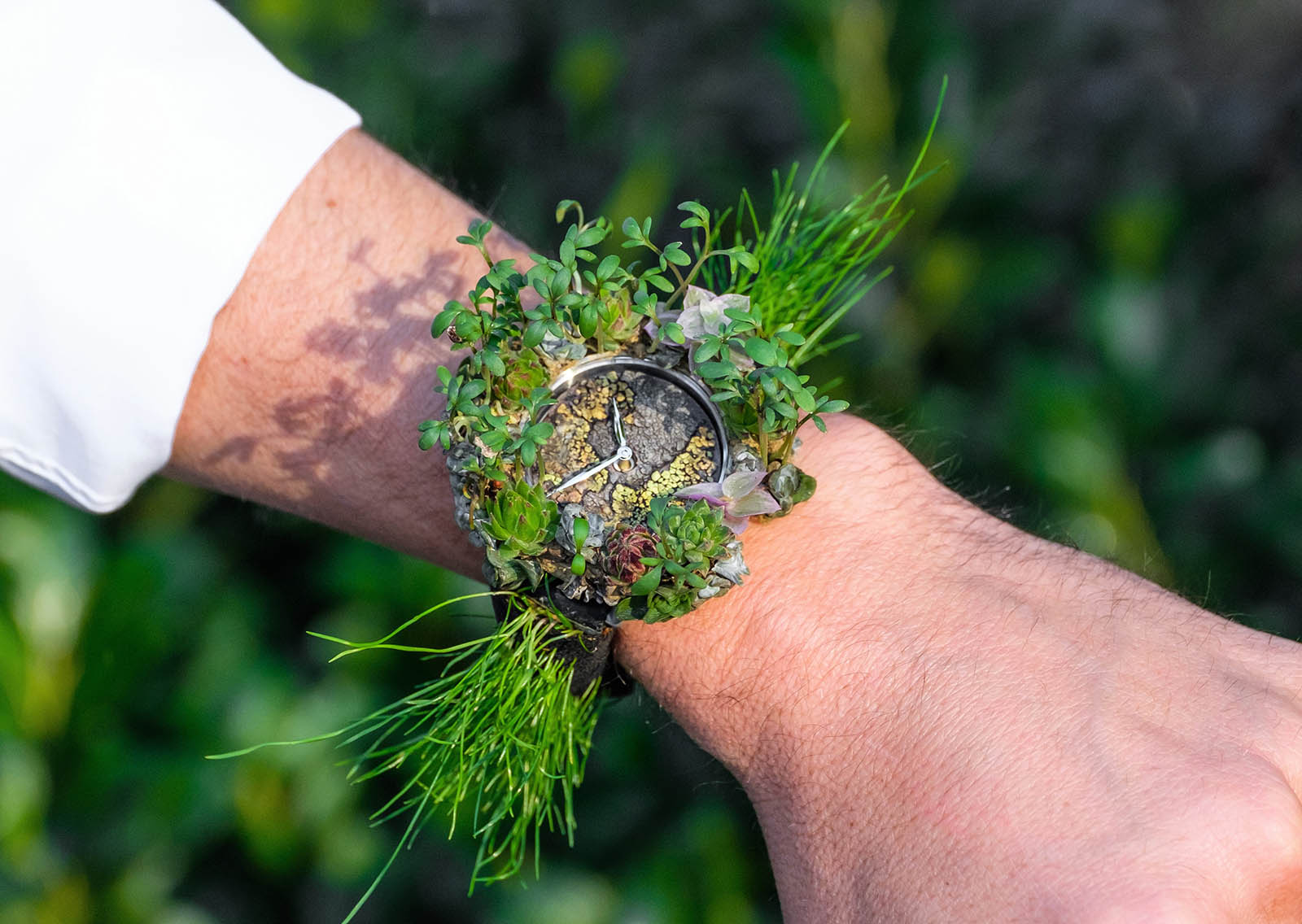 H. Moser & Cie. has once again unveiled an amusing timepiece – the grass-covered Nature Watch – trolling the rules governing the “Swiss made” label while delivering an environmental message. The company has made such provocative watches an annual affair, with the Nature Watch following the Apple Watch parody Swiss Alp Watch, the dairy-infused Swiss Mad Watch, and the explicit Swiss Icons Watch that took things a little too far and was retracted soon after.

Like its predecessors, the Nature Watch is once again intended as a headline grabber more than anything else. A unique piece that is not for sale, the Nature Watch is essentially a steel wristwatch adorned with greenery and wears like a wrist corsage, composed of “succulents, moss, mini Echeveria, cress, spiderwort and onion sets, with a dial in natural mineral stone and lichen from the Swiss Alps, and a strap made from grass.” The press release continues, “It was created using plants native to Switzerland, grown in the gardens of our Schaffhausen-based Manufacture. Our entire team – watchmakers and non-watchmakers – had a hand in cultivating it.”

Excluding the plants, the case measures 42mm in diameter and 9.4mm in height. It houses the hand-wound HMC 327 caliber, which has a three-day power reserve and is equipped with a Straumann hairspring. According to Moser, the company is actually practicing what it preaches. The brand is committed to fulfilling the requirements of the Responsible Jewellery Council, using Fairtrade materials as often as possible, including Fairtrade gold for cases, as well as ensuring “zero-carbon footprint in manufacturing our timepieces by using more efficient methods and procedures, and by offsetting the residual footprint by buying carbon credits.”

And important, amidst all the preaching and a slightly gimmicky watch, Moser is actually doing some good. Because many ecological problems are often linked to the poor and disadvantaged, the brand has partnered with Room to Read, an NGO dedicated to improving literacy and gender equality in education by building schools and libraries, and distributing books.

In the coming months, Moser will reveal several unique timepieces that will be sold to benefit the charity, but is also doing more immediate good: it will donate 10 children’s books for every visitor to the H. Moser & Cie. booth at SIHH 2019. The Nature Watch will be on show at the booth.