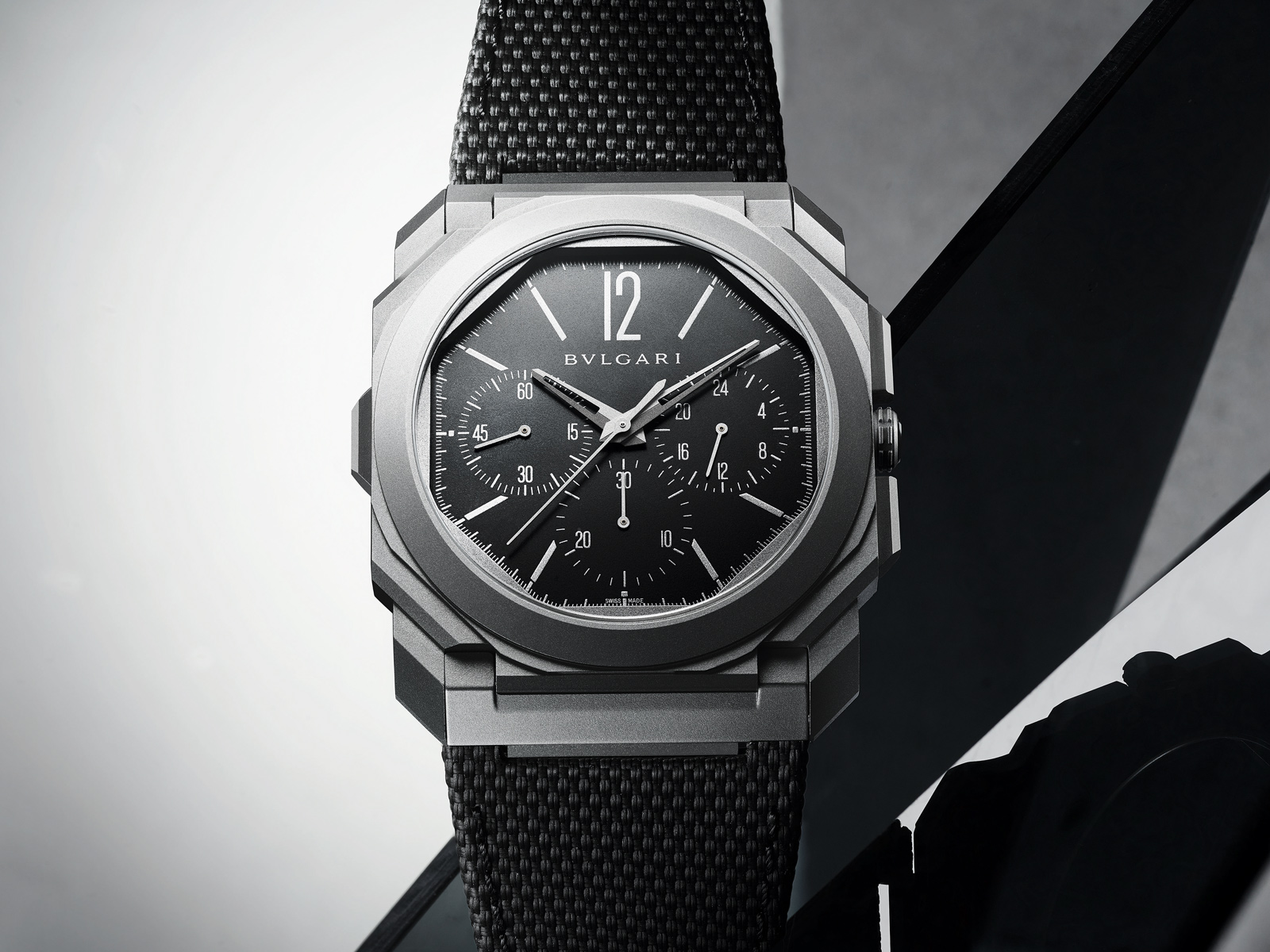 Bulgari’s race to the flattest started in 2014, when it started unveiling one complication after another of record-setting slimness, culminating with the thinnest-ever automatic chronograph two years ago.

While the original version is monochromatic and all titanium, the new Octo Finissimo Chronograph GMT Titanium is a twist on the theme. It’s fitted to an integrated rubber  strap, in a first for the model that leaves it even more featherweight. 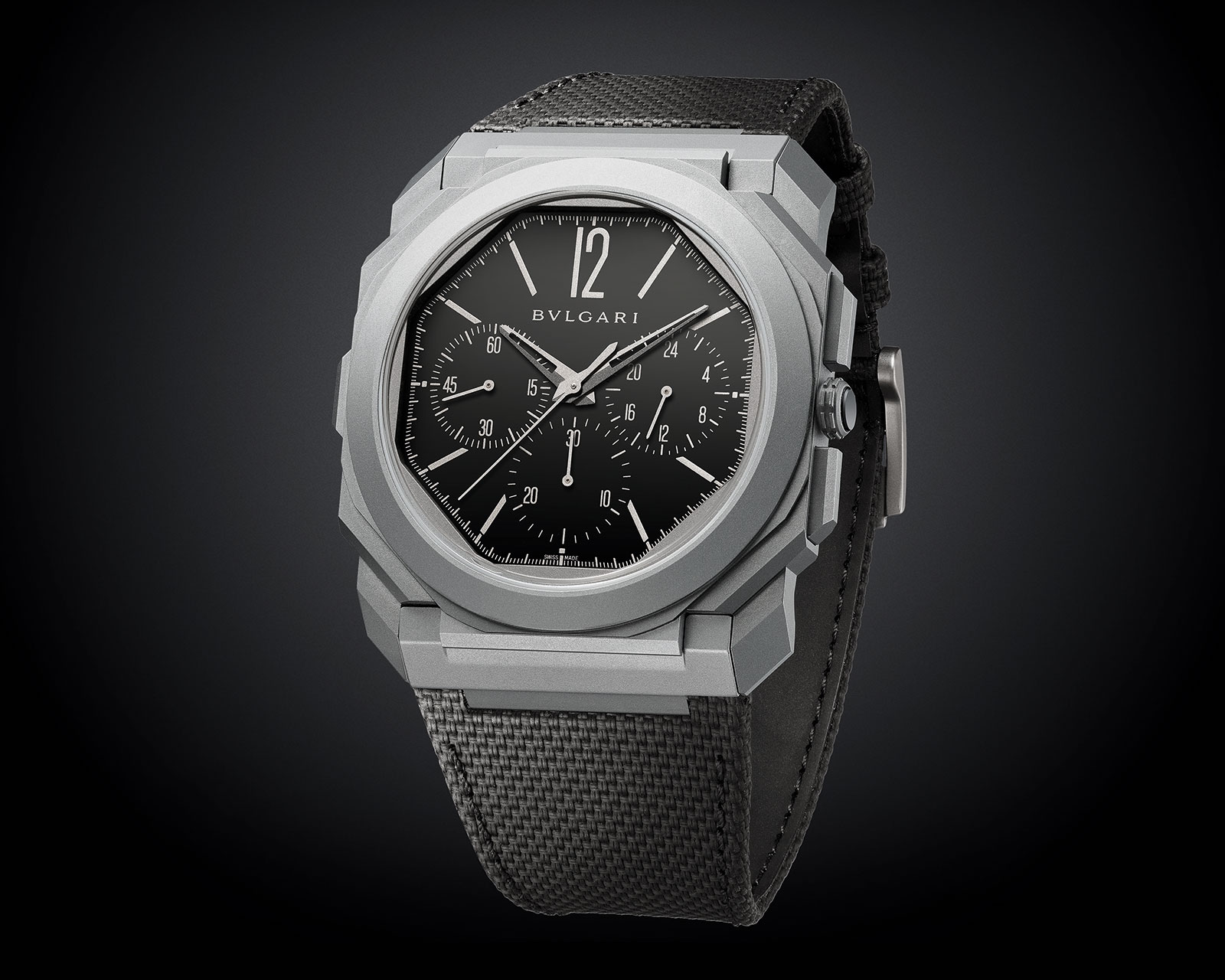 Admittedly – at least from a technical standpoint – the new Octo chronograph isn’t as exciting as it was when the model was first launched. This is just a facelift, but it’s a good one.

Though similar to earlier versions of the Octo chronograph, the new model stands out for its palette, which arguably gives it more wrist presence. The original version has an integrated metal bracelet that flowed well in terms of visual continuity. But the strap is compelling for the opposite reason: it makes the extra-thin case stand out, increasing the visual contrast while making the watch look a bit fancier. 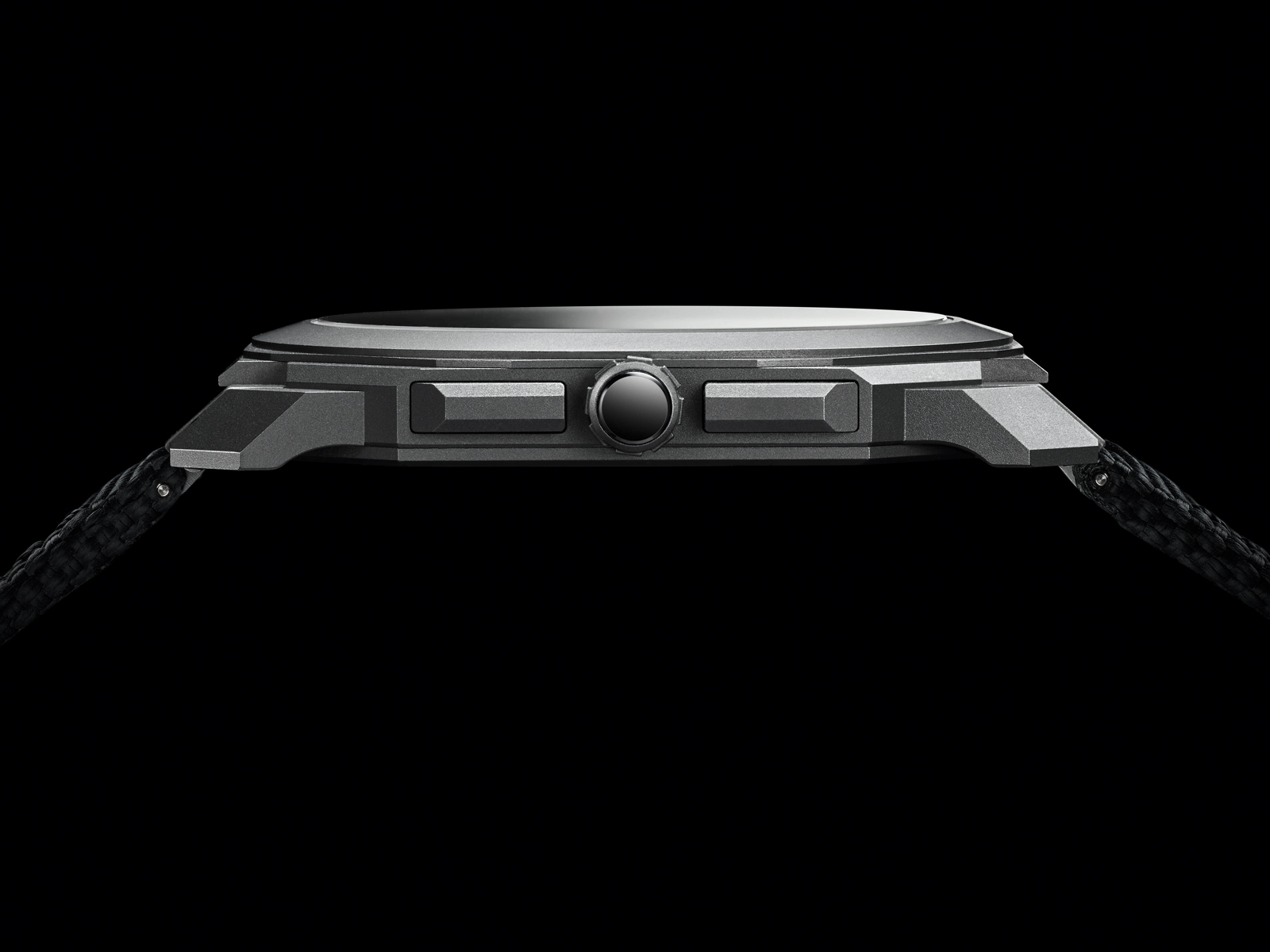 The elimination of the bracelet will surely change its tangible feel on the wrist substantially. Because of the lightweight materials – a titanium case and strap in rubber – the watch will feel almost non-existent on wrist, taking the ultra-thin nature of the Octo one step forward.

And like the time-only version of the Octo, the Chronograph is fairly priced in most iterations. This costs US$17,200, making it one of the most competitively priced luxury-sports chronographs on the market. Though it lacks the fine finishing of its higher-priced competitors, the Octo chronograph makes up for it in design flair.

Thanks to the BVL 318 inside – which is only 3.3 mm high – the Oct chronograph clocks in at an unbelievable 6.9 mm. That’s probably as thin as an automatic chronograph built with traditional materials can be. 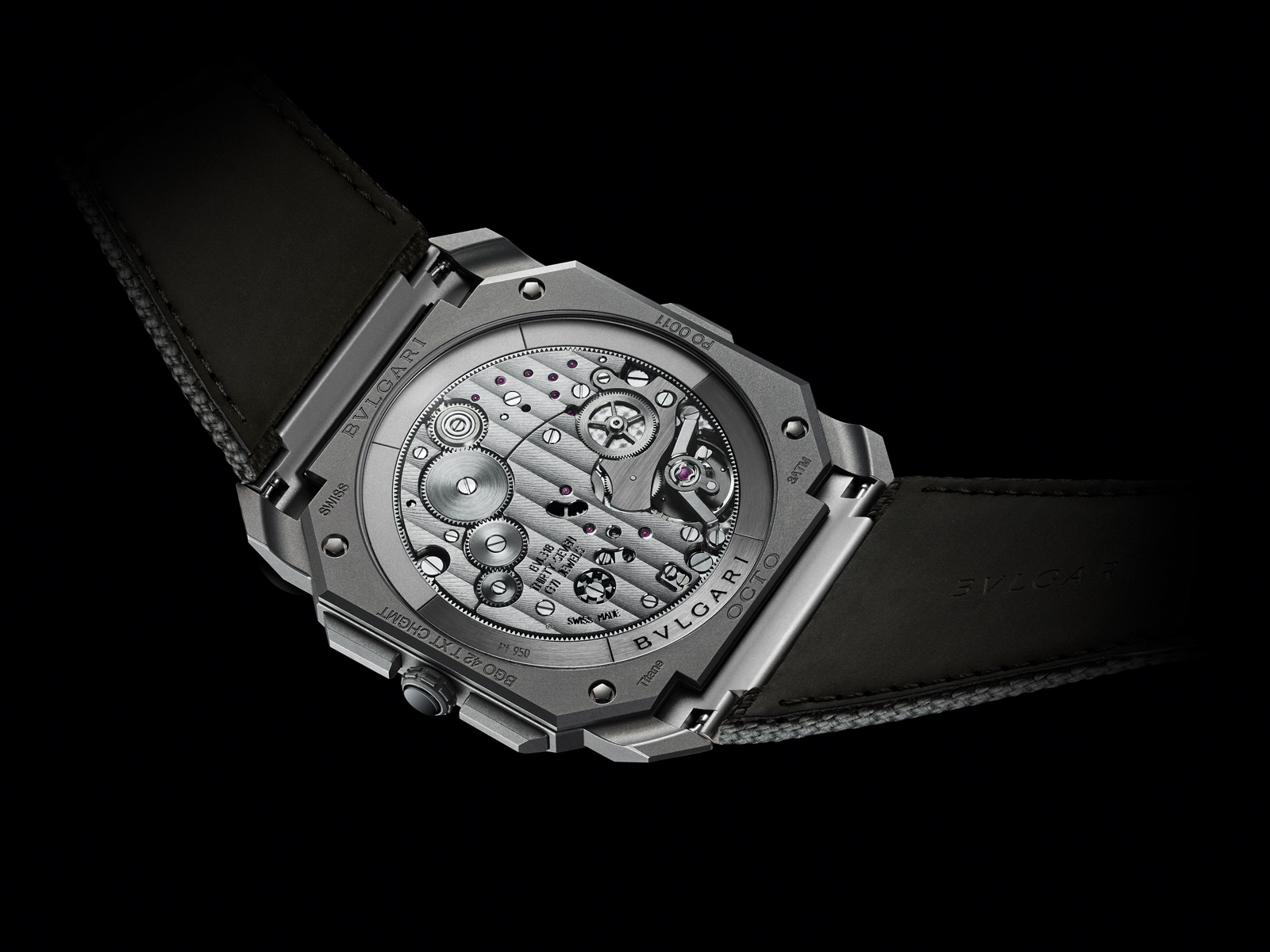 One reason for its slimness is the horizontal layout of the components, which are spread out rather than stacked up, explaining why the movement is a rather wide 37.2 mm. The winding rotor, for instance, is peripheral, a narrow ring made of aluminium and platinum mounted on the perimeter of the movement. 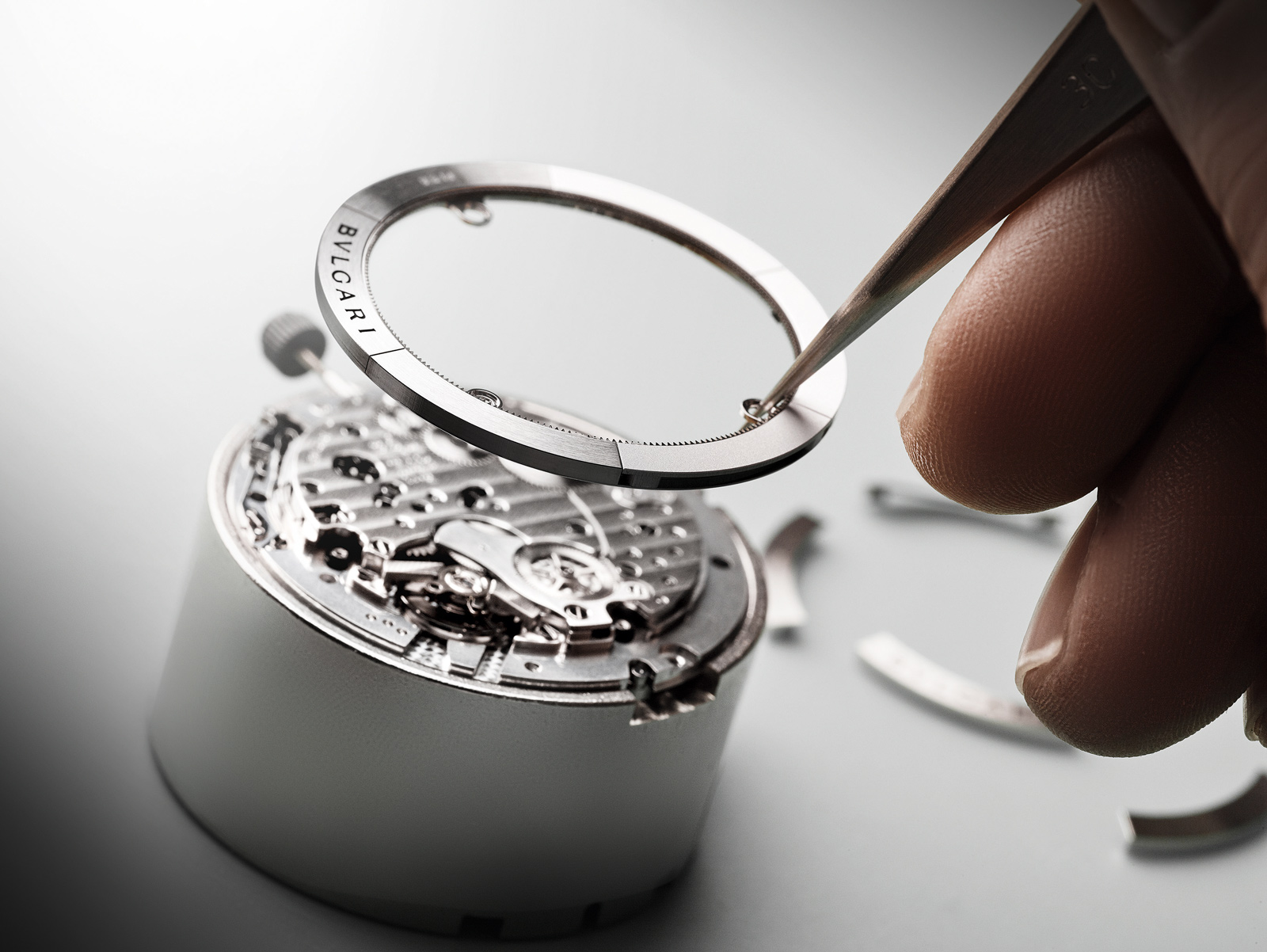 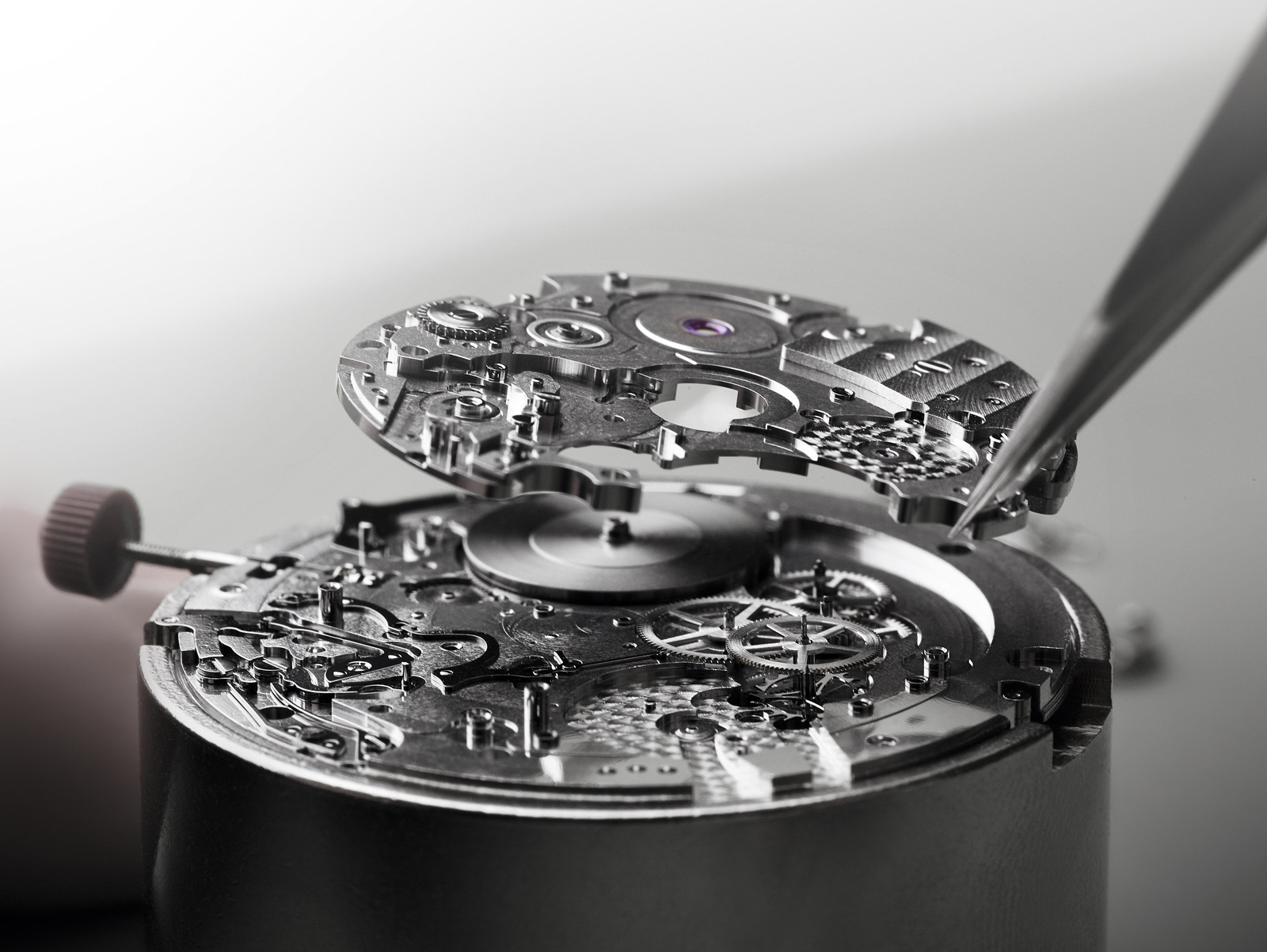 Limited edition: No
Availability: From Bulgari online shops, boutiques, and retailers
Price: US$17,200, or 24,300 Singapore dollars 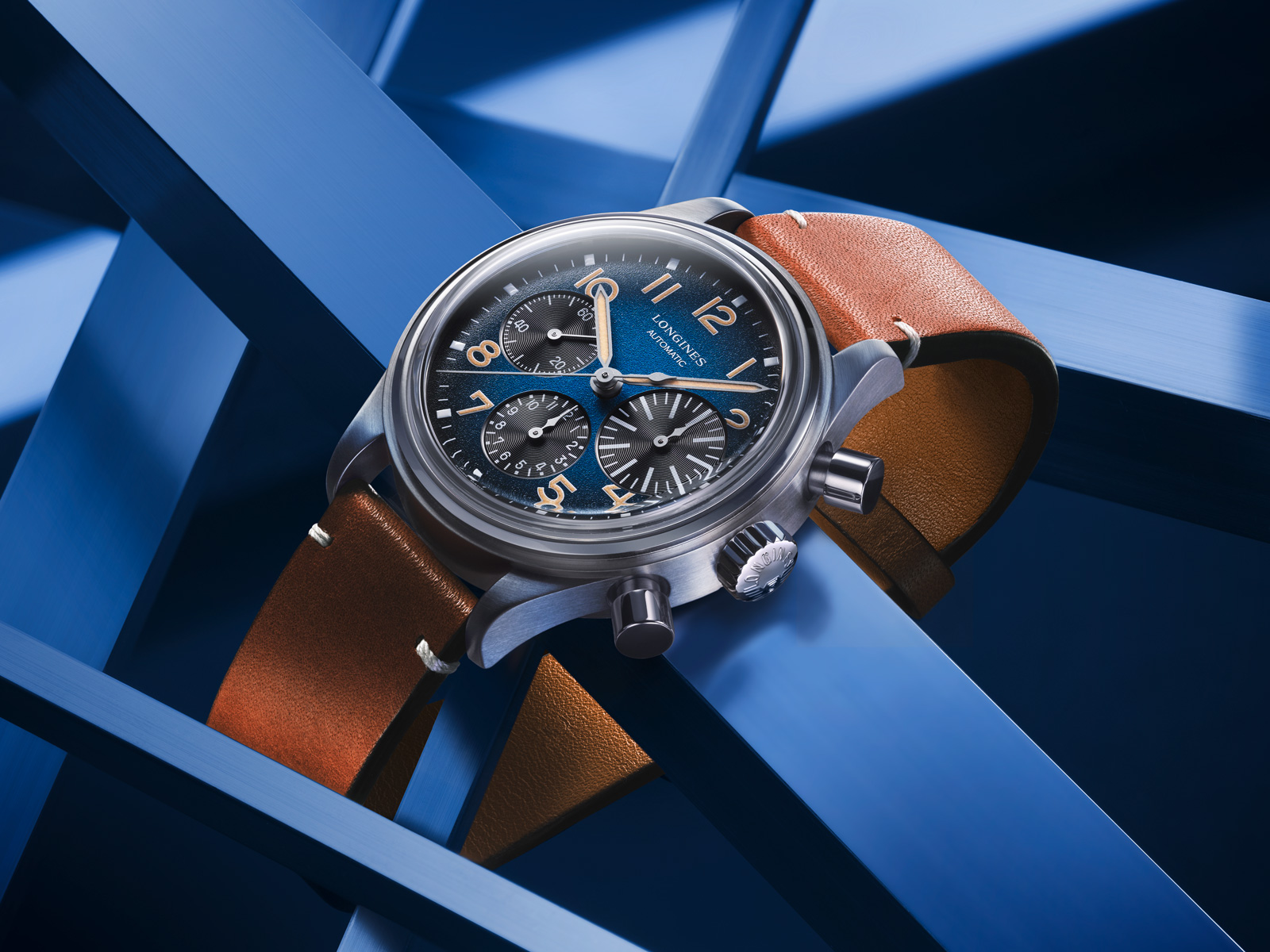 When Longines first remade a 1970s pilot’s chronograph as the Avigation BigEye Chronograph, it was well received for being a faithful re-interpretation priced affordably, as most other Longines reissues are.

While the 2017 model was a dead ringer for the vintage original, Longines has just facelifted the watch, giving it a titanium case and gradient blue dial. That gives the Avigation BigEye Titanium more modern look, which along with the upgraded case, results in a steeper price that’s about a quarter more than that of the steel model. 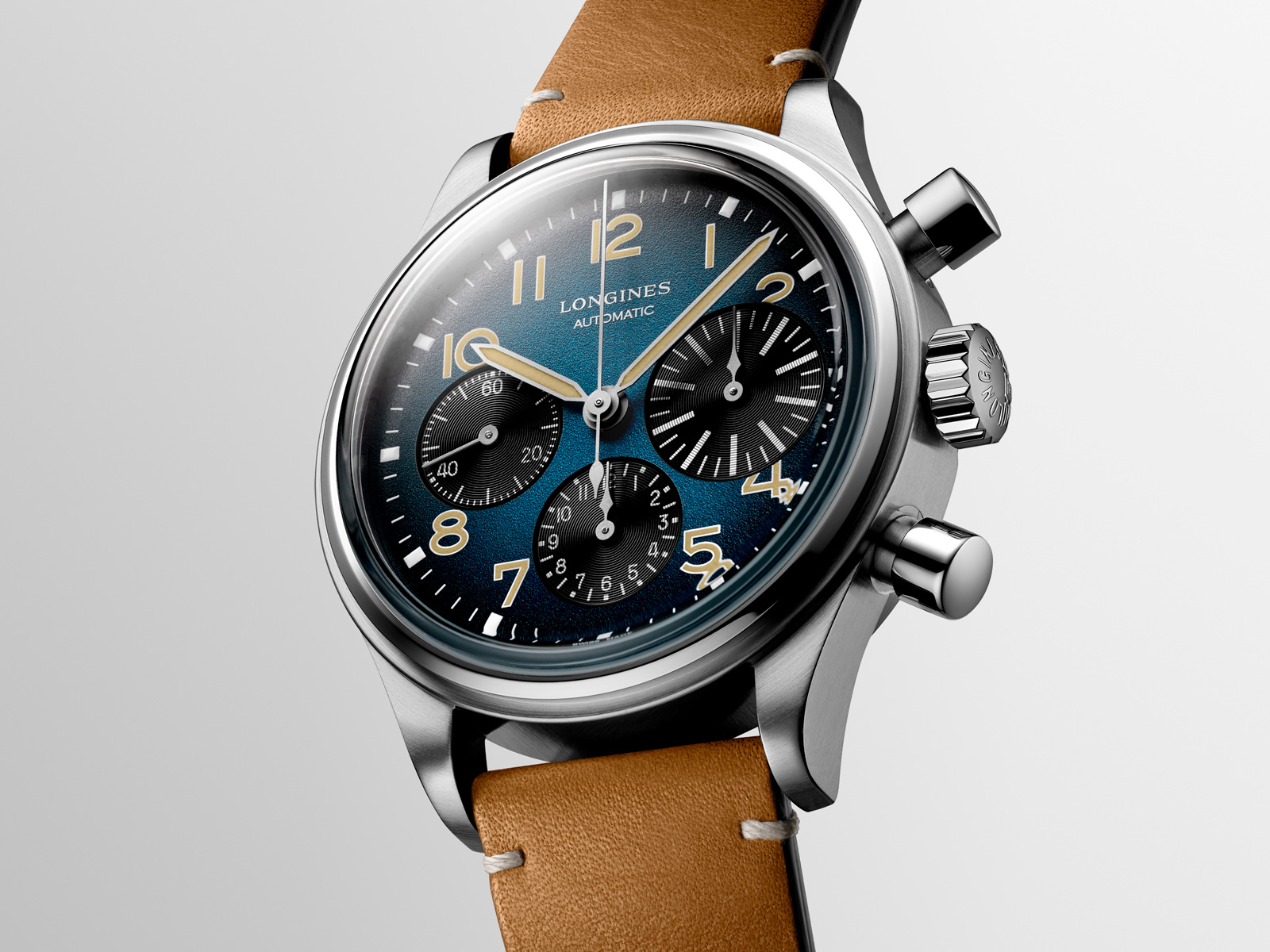 Longines has been hitting it out of the park with its recent remakes – the Silver Arrow, Classic “Tuxedo” Chronograph, and Heritage Classic “Sector” Dial – that are smartly designed and good value, and despite the hike in price, BigEye Titanium is no exception.

While the steel BigEye had a utilitarian look like the 1970s original, the titanium version is decidedly more contemporary. The gradient blue dial is bold, and also fashionable today, with a sandblasted texture adding further visual intrigue.

I like the juxtaposition of the black sub-dials against the blue gradient finish, though the faux patina on the hands and indices might be a bit too affected, especially with the modern look. Despite the tweaks, the BigEye Titanium retains the same legible design, thus preserving the historical raison d’etre of its design. 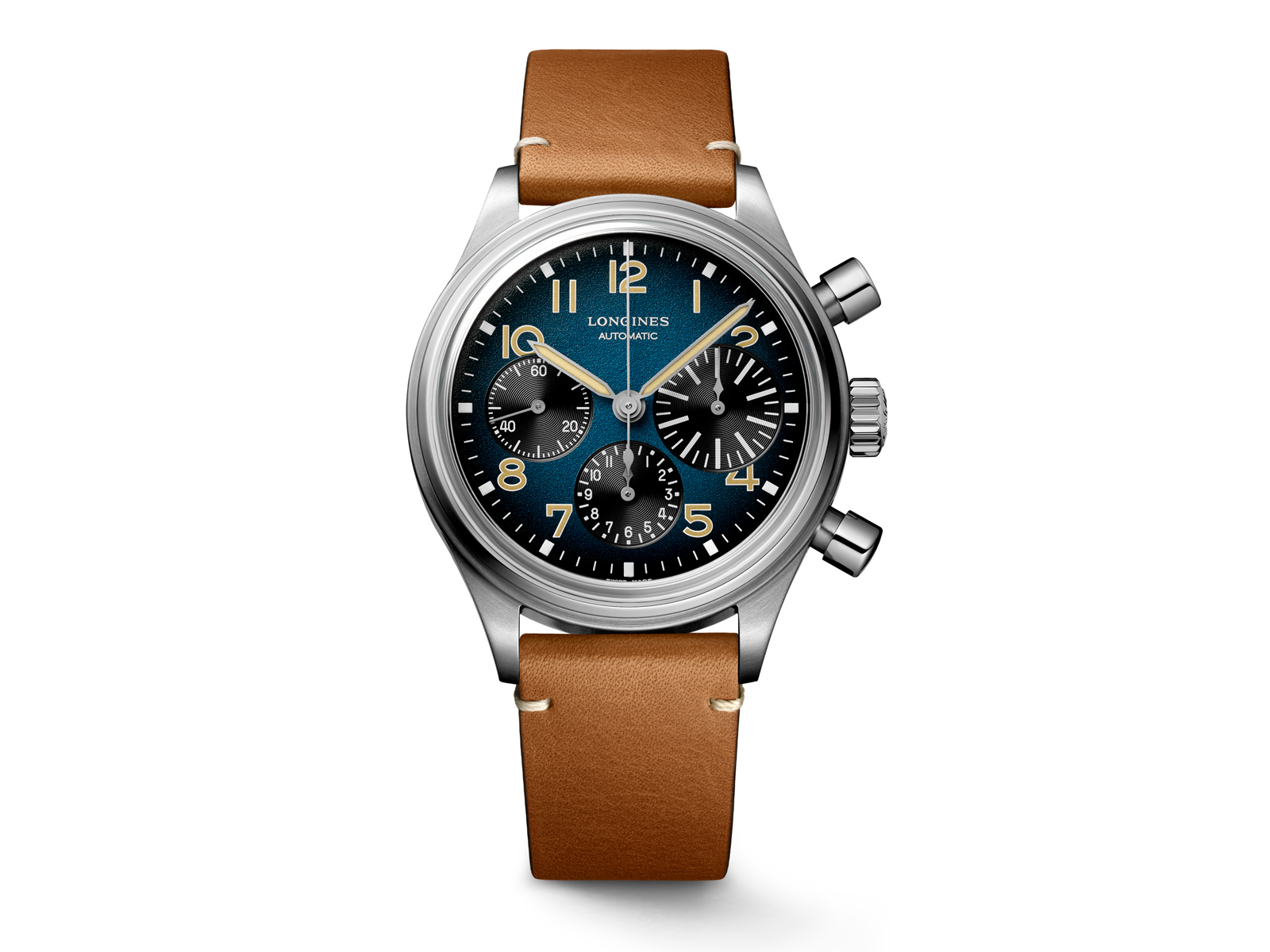 Another notable feature is the titanium case, which makes the new BigEye the brand’s first titanium chronograph in decades. A lightweight alloy with a dull grey finish, titanium is appropriate for a pilot’s watch – the metal is also nonmagnetic – and more broadly, a sign that the brand is experimenting with different case materials, beyond the typical steel that’s the norm in its price point.

Powered by a column-wheel chronograph movement with a silicon hairspring, the Avigation BigEye Titanium is probably one of the best chronographs in its price segment. It does costs substantially more than the steel model, but the novelty and practically of the titanium case justifies the premium. 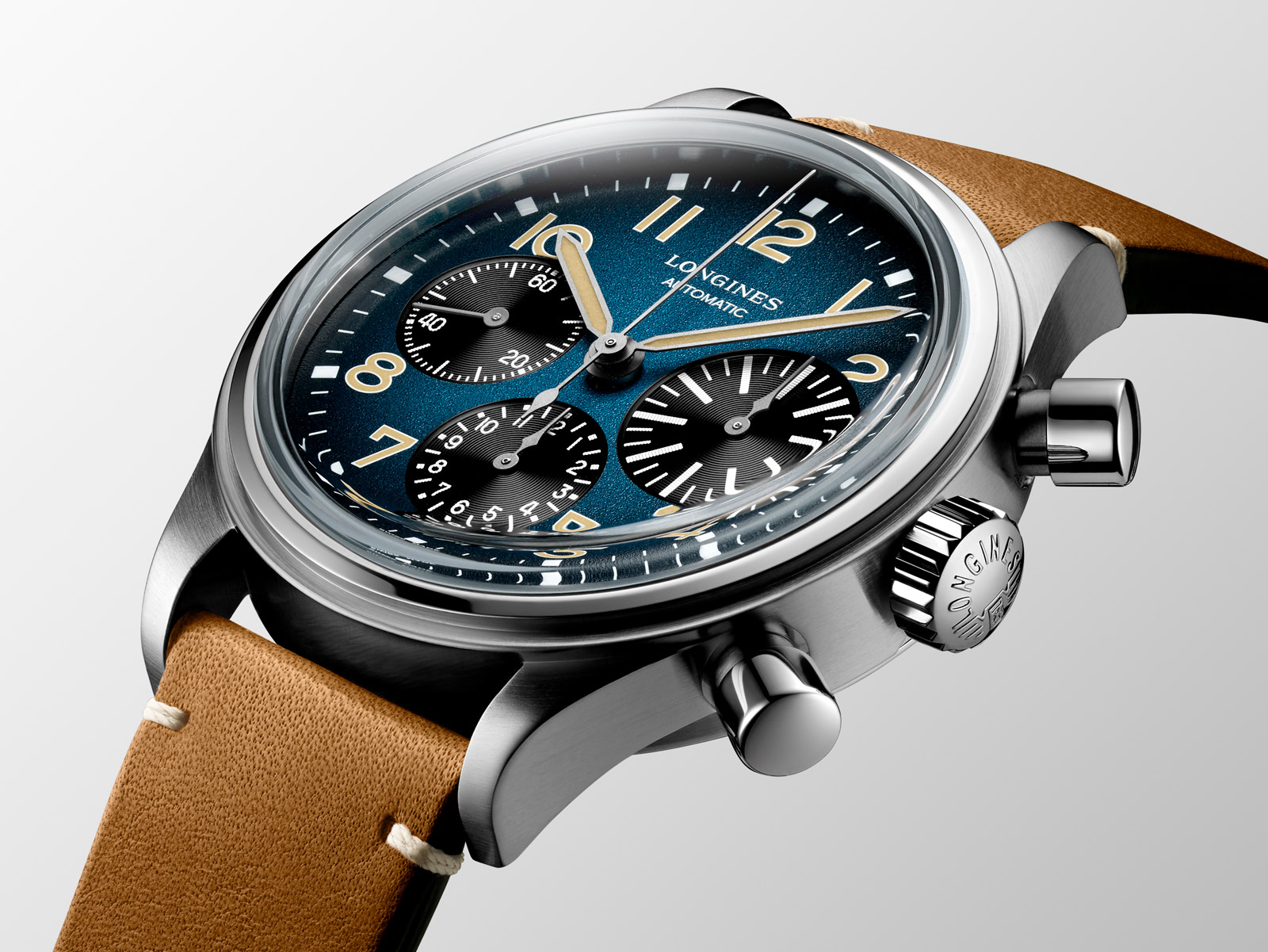 Aside from the blue dial and titanium case, the BigEye Titanium is largely identical to the steel model of 2017. It’s most prominent is feature is the oversized 30-minute register at three o’clock, hence the “BigEye” moniker.

But because this retains the same dial design as the steel model, the minute counter remains as confusing as before, with the elongated hashmarks mysteriously graduated in three-minute segments, instead of the conventional five. 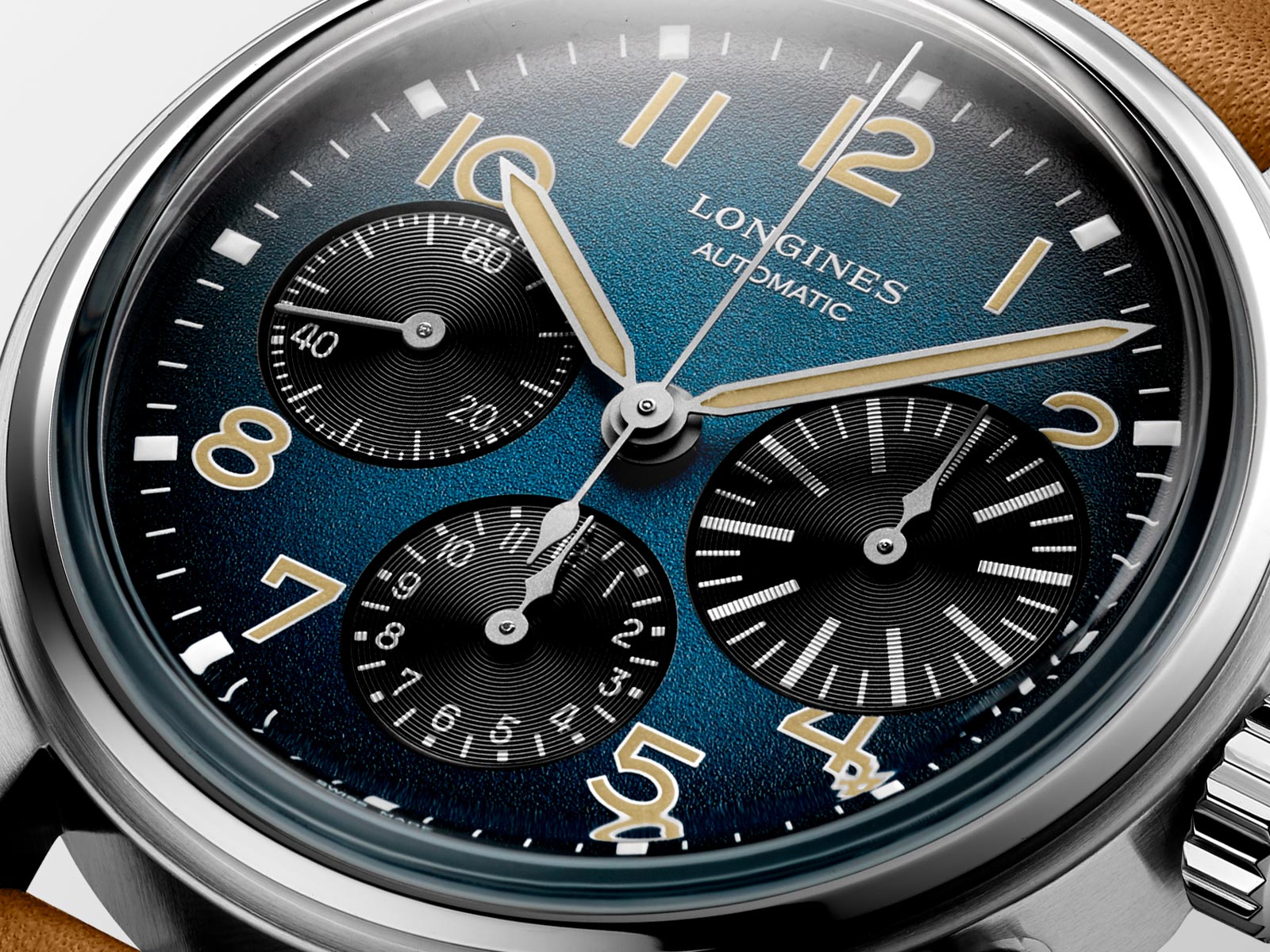 The case of BigEye Titanium is relatively simple in form and finish, being mostly brushed save for the polished bezel, crown, and pushers. Like the 2017 model, the BigEye Titanium has a diameter of 41 mm and a thickness of 14.5 mm – proportions that suit its aviation watch styling.

It sticks closely to the design of the vintage original, with extra-large pushers and a stepped bezel. And it’s fitted with a “box type” sapphire crystal that mimics the look of the domed acrylic crystal found on the original. 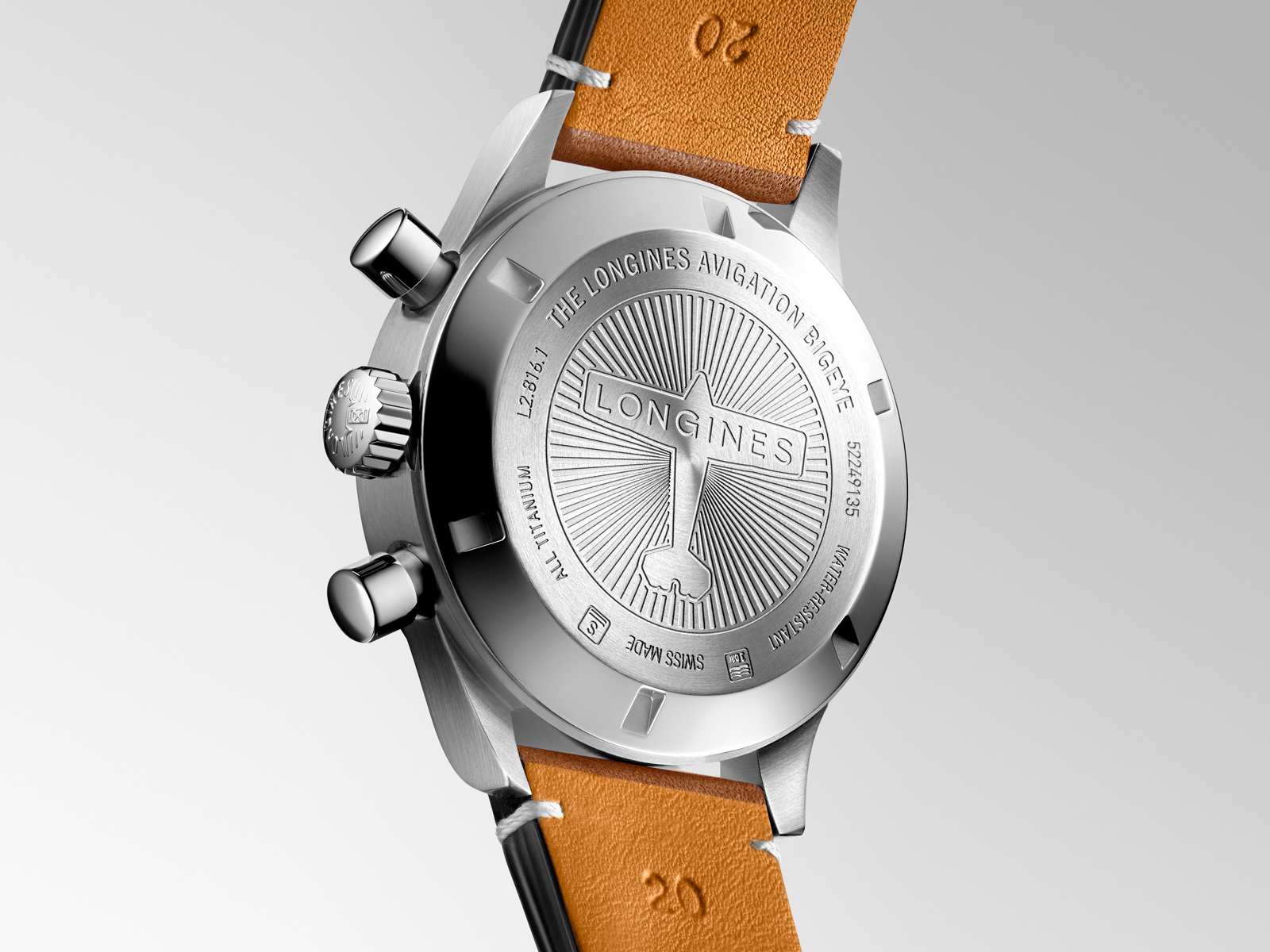 The BigEye Titanium is powered is the cal. L688, a heavily modified version of the Valjoux 7750. Like all Longines movements, the L688 is made by ETA exclusively for Longines.

It features a column wheel instead of the usual cam to start and stop the chronograph, as well as an extended 54 hours of power reserve. And as the movement uses a silicon hairspring, it benefits from a five year warranty, as compared to the usual two. 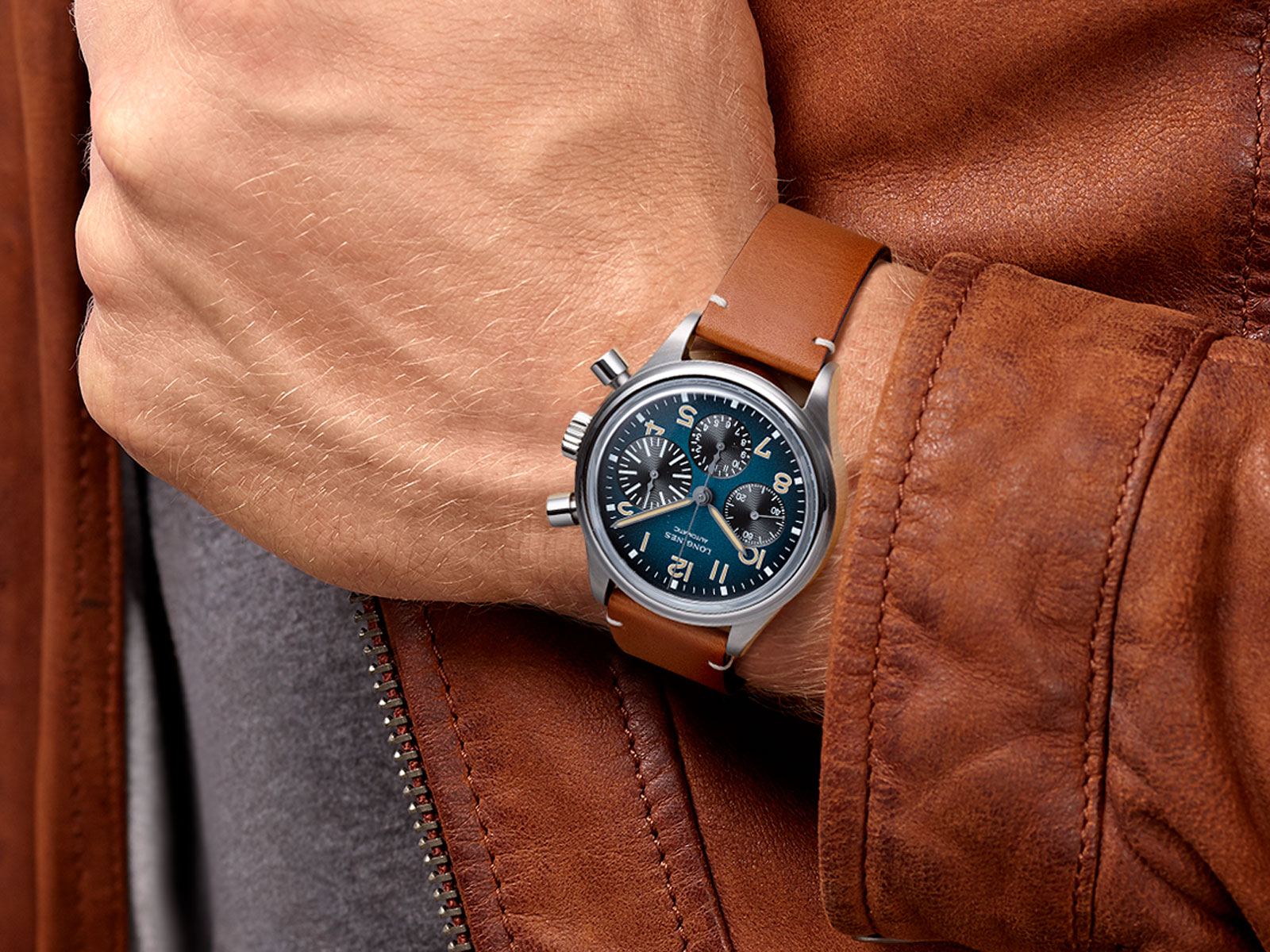