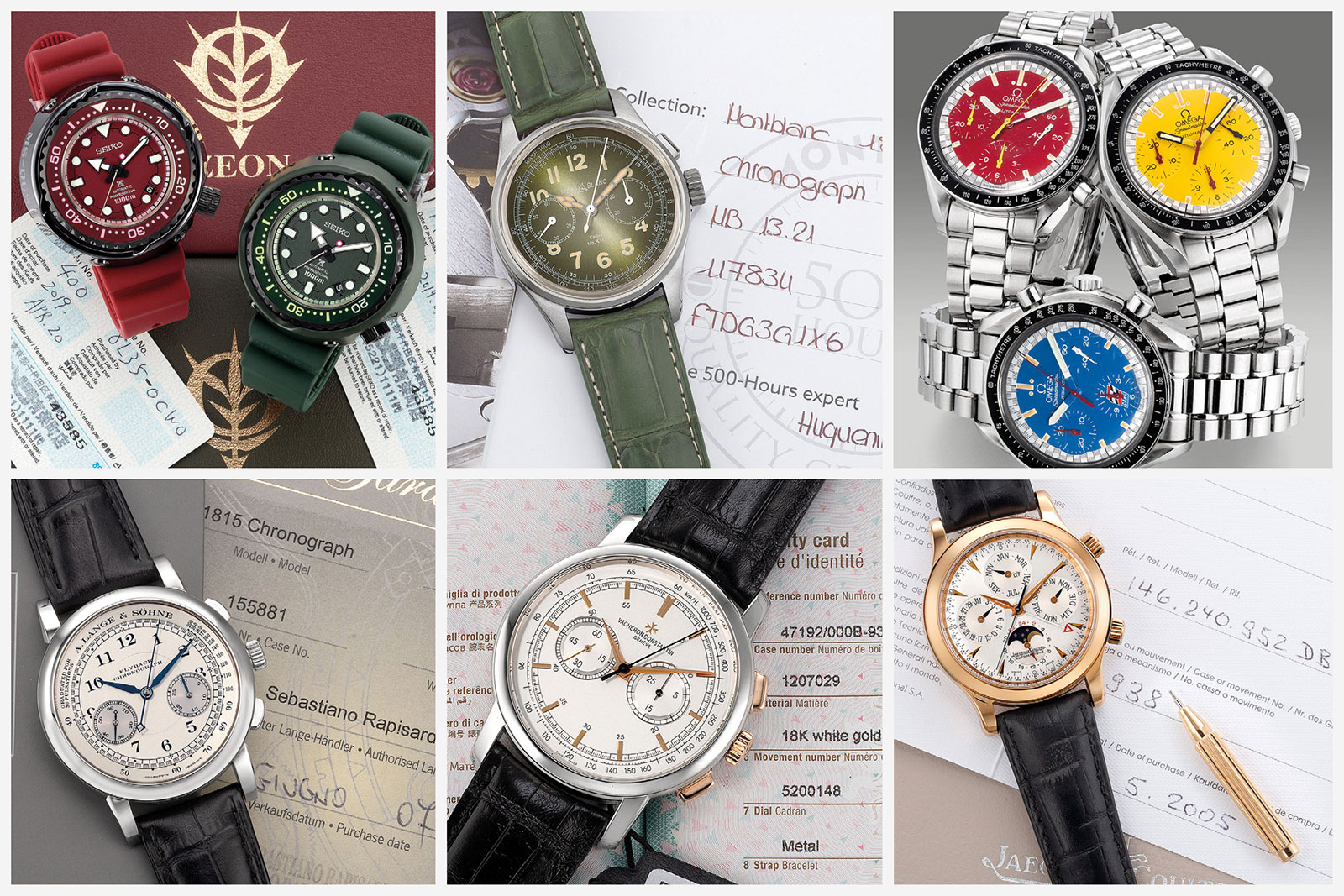 Happening at the end of the month, The Hong Kong Watch Auction: XI is a 250-lot auction with a diversity of offerings, including a good number of grand complications as well as a full complement of the recently-launched Rolex Oyster Perpetual with candy-coloured dials.

But for the enthusiast with more esoteric tastes, the sale also includes a selection of affordable independent watchmaking, as well as value buys from more mainstream brands – here’s a look at a couple of highlights, ranging from a surprisingly well-priced Grand Lange 1 Luna Mundi to a white-and-rose-gold Vacheron Constantin chronograph.

An anime series about humans doing battle in giant robots, Mobile Suit Gundam is one of the most famed examples of Japanese pop culture, even having a Wikipedia page titled “Cultural impact of Gundam“. Seiko rolled out several limited editions for the 40th anniversary of the franchise last year, including this pair dedicated to the villains of the series, the dome-headed robots known as Zaku. 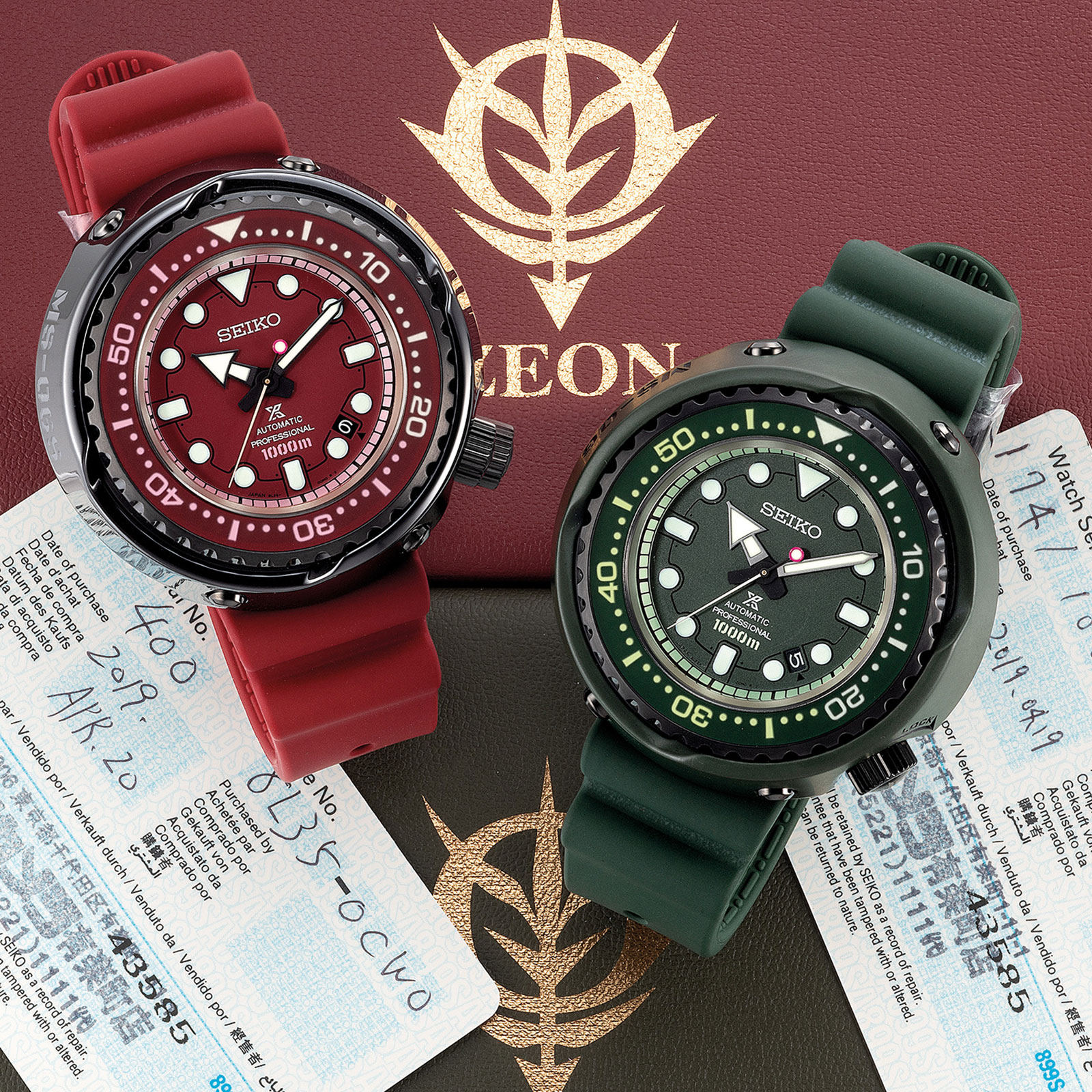 Bulbous and vaguely military in form, the Prospex “Tuna” – arguably the most iconic of Seiko’s many dive watch designs – is surprisingly well matched to the Zaku robots. Resembling a tuna can, the watch case is actually double walled, made up of an inner titanium case protected by an outer ceramic shroud.

These were each limited to 1000 pieces, and clad in the colours of a character from the cartoon. Both are brand new and accompanied by the original box and warranty card.

A bestseller in the late 1990s when Michael Schumacher had just joined Scuderia Ferrari, marking his rise to multi-year world champion, the Speedmaster Reduced Racing is often known as the Michael Schumacher edition, because the Formula 1 driver had just signed on as an Omega brand ambassador at the time. 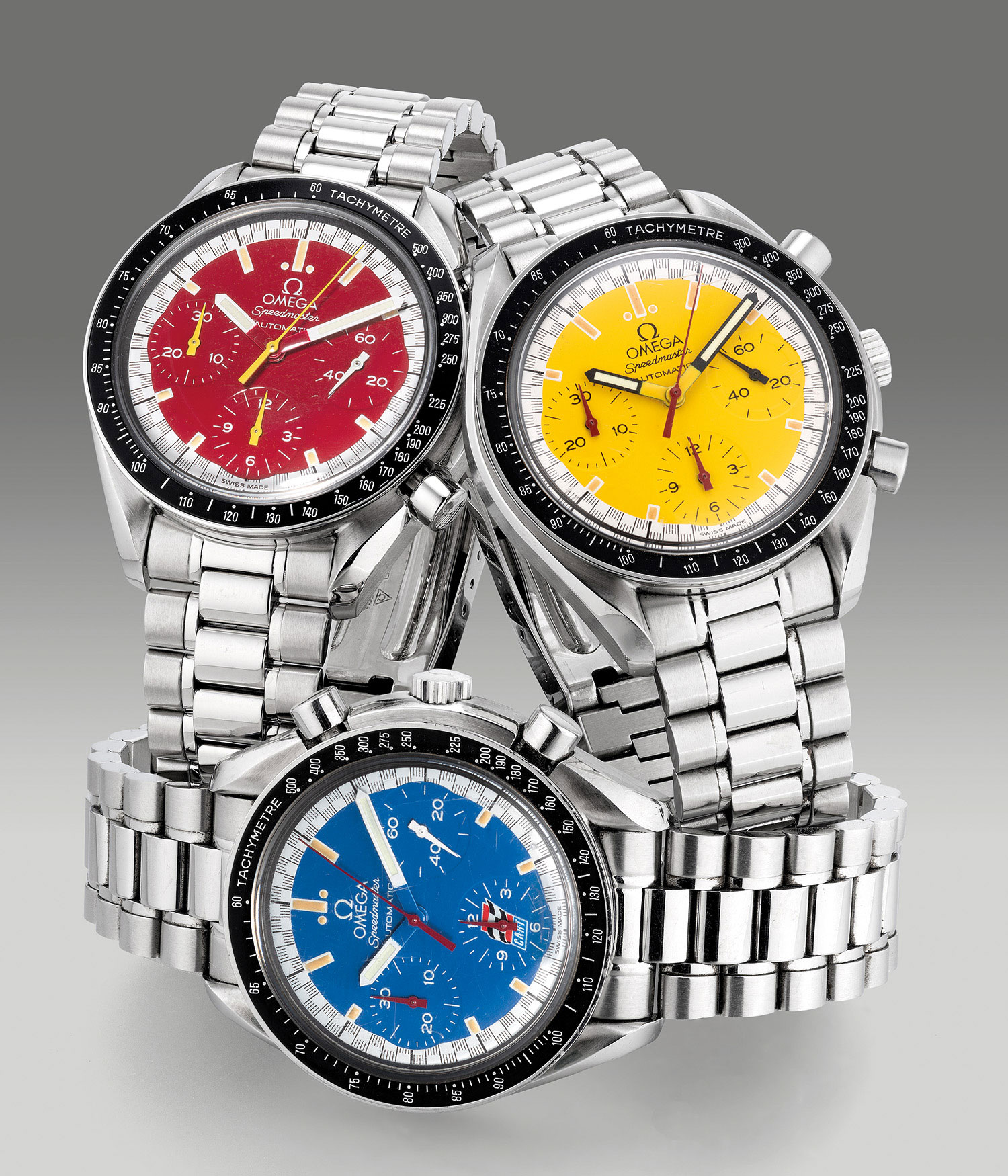 The “Reduced” suffix in the name comes from the 39 mm case, which is 3 mm smaller than the Speedmaster Professional Moon Watch. Size aside, the Speedmaster Reduced is also automatic, powered by the ETA 2894 movement, in contrast to the hand-wind Lemania 1874 in the Moon Watch. 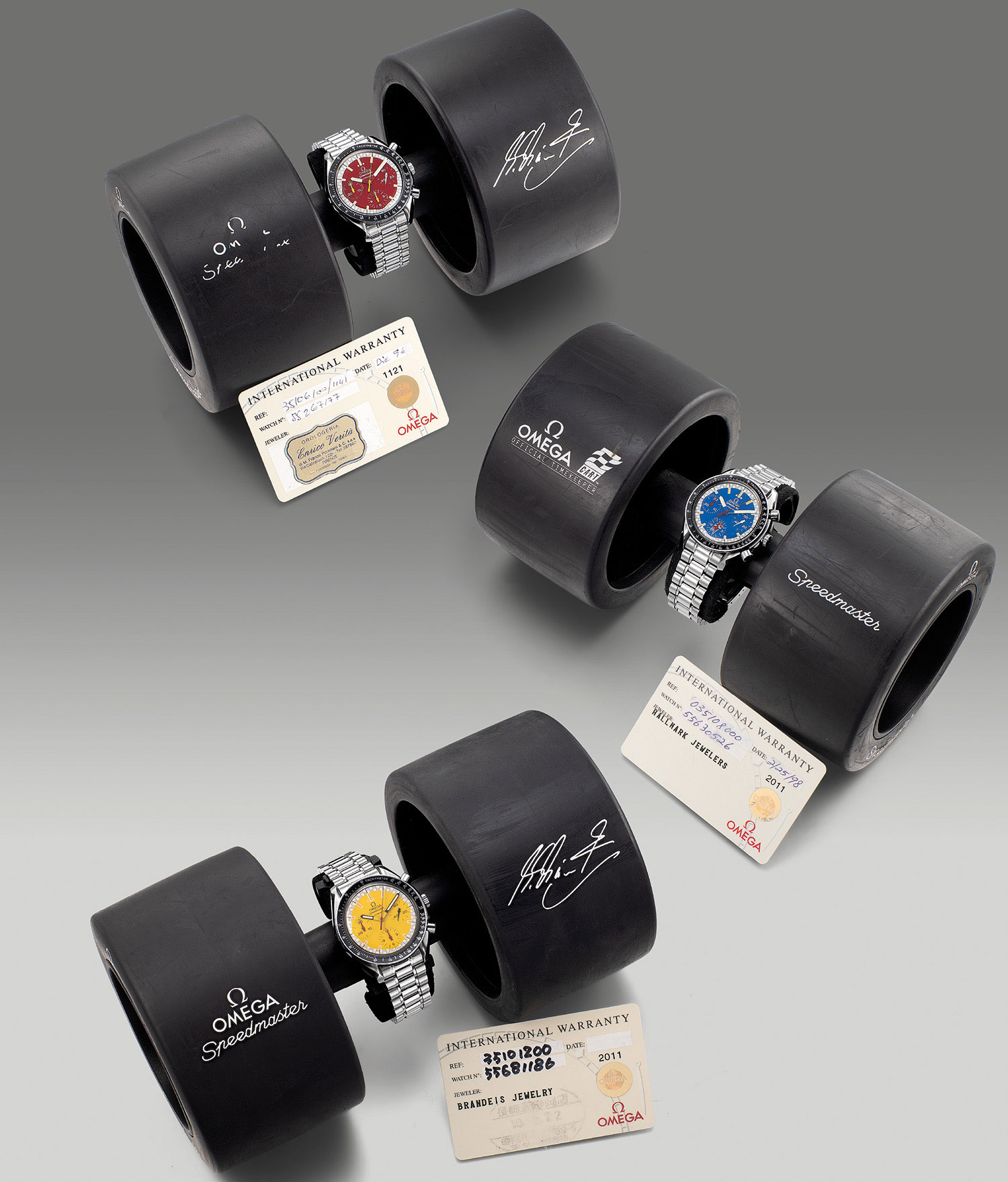 Widely advertised and impossible to miss during their production run from 1996 to 1999, the Racing watches were offered in a trio of bright colours, packaged neatly into a three-piece set in the auction. All of them include the original tyre-shaped box, as well as their respective warranty cards.

Beautifully artisanal and subtle in a typically Japanese manner, the dial of this L.U.C XP is decorated in maki-e, the traditional art of Japanese lacquer. Specifically, the technique taka maki-e, which uses powders to build up layers on the surface, creating a relief motif. 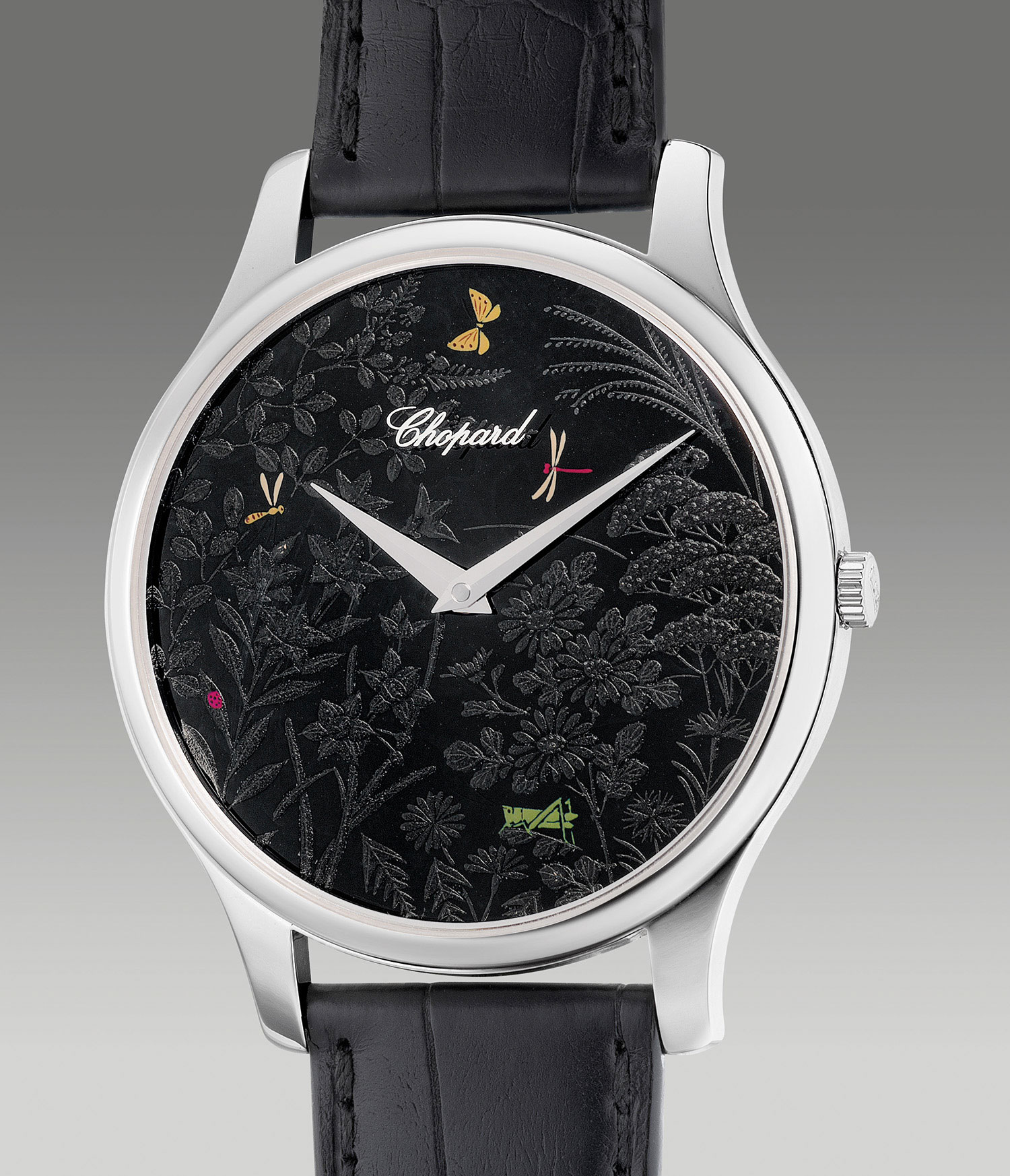 Created with sap from the lacquer tree as well as precious materials like gold and silver powder, the maki-e dial is hand painted by Minori Koizumi, an artist who works for Yamada Heiando, a century-old firm that’s the official supplier of lacquerware to the Japanese Imperial Household.

Despite being elaborately decorated – very much metiers d’art except from East Asia – the watch can be a formal-dress watch. At the distance, the dial appears to be plain black, with its intricate details only revealing themselves at arm’s length. It depicts tiny insects in great intricacy against a relief background of foliage in black ash powder.

The case is 18k white gold, and contains the cal. 96.17-L, a slim, in-house calibre with a sophisticated construction that’s not as widely appreciated as it should be. 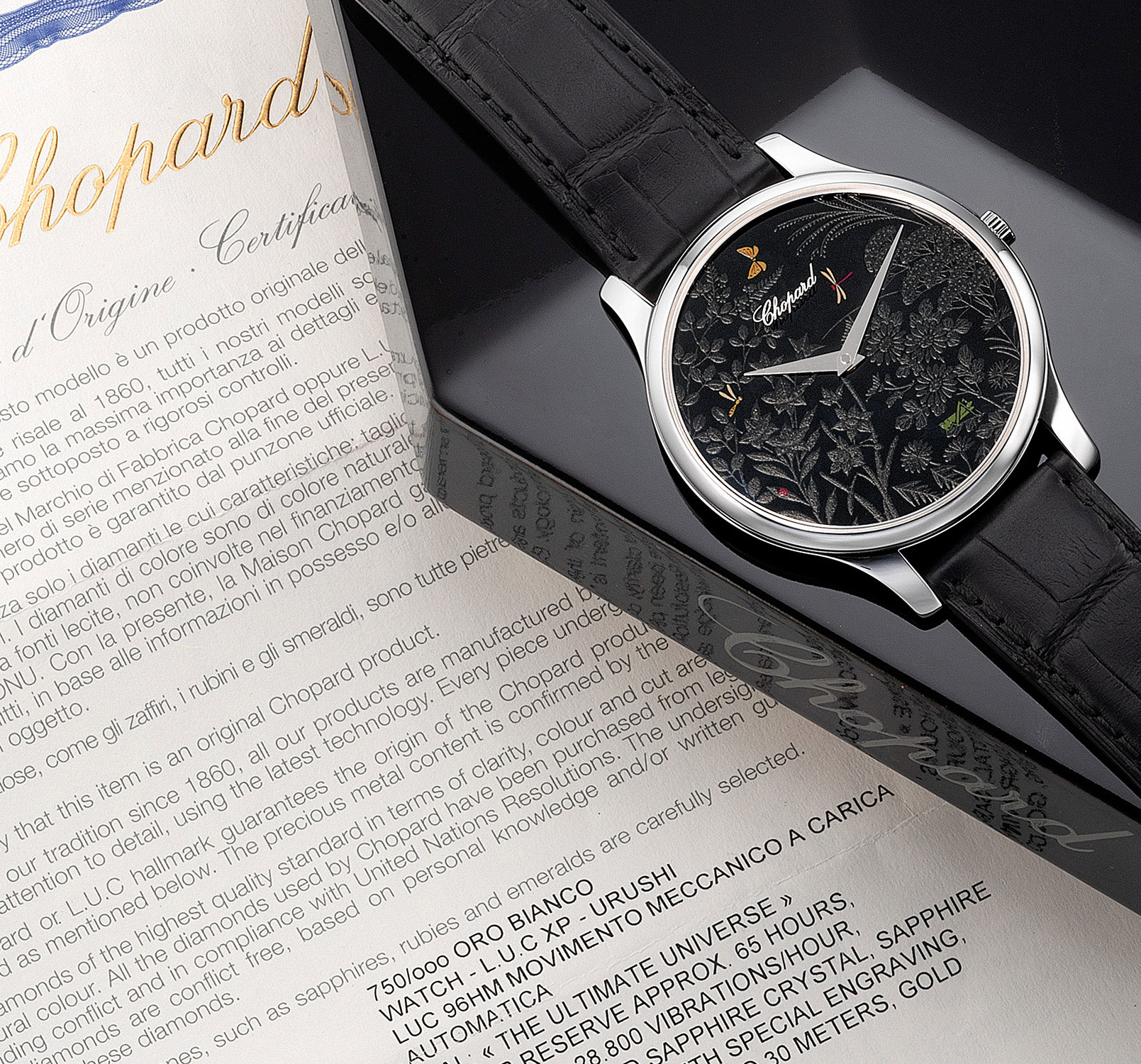 As Lange chronographs go, the 1815 version is unquestionably the best value. Widely liked for being affordable while still possessing the gorgeous L951 chronograph movement, the 1815 Chronograph is essentially a simpler version of the Datograph.

The 1815 does not have an oversized date like its bigger brother, but it is a flyback chronograph, with the same mechanical landscape visible through the display back. 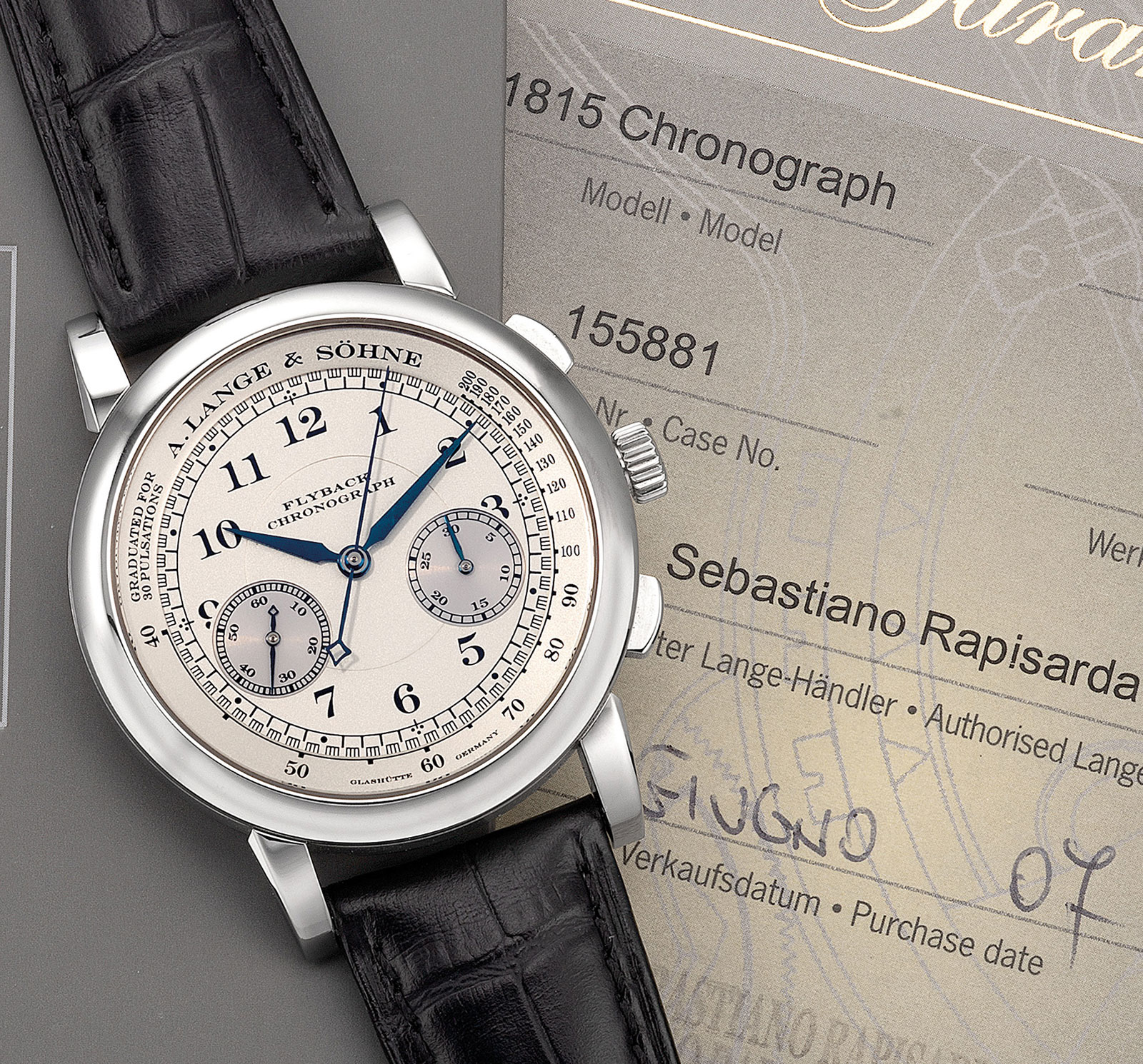 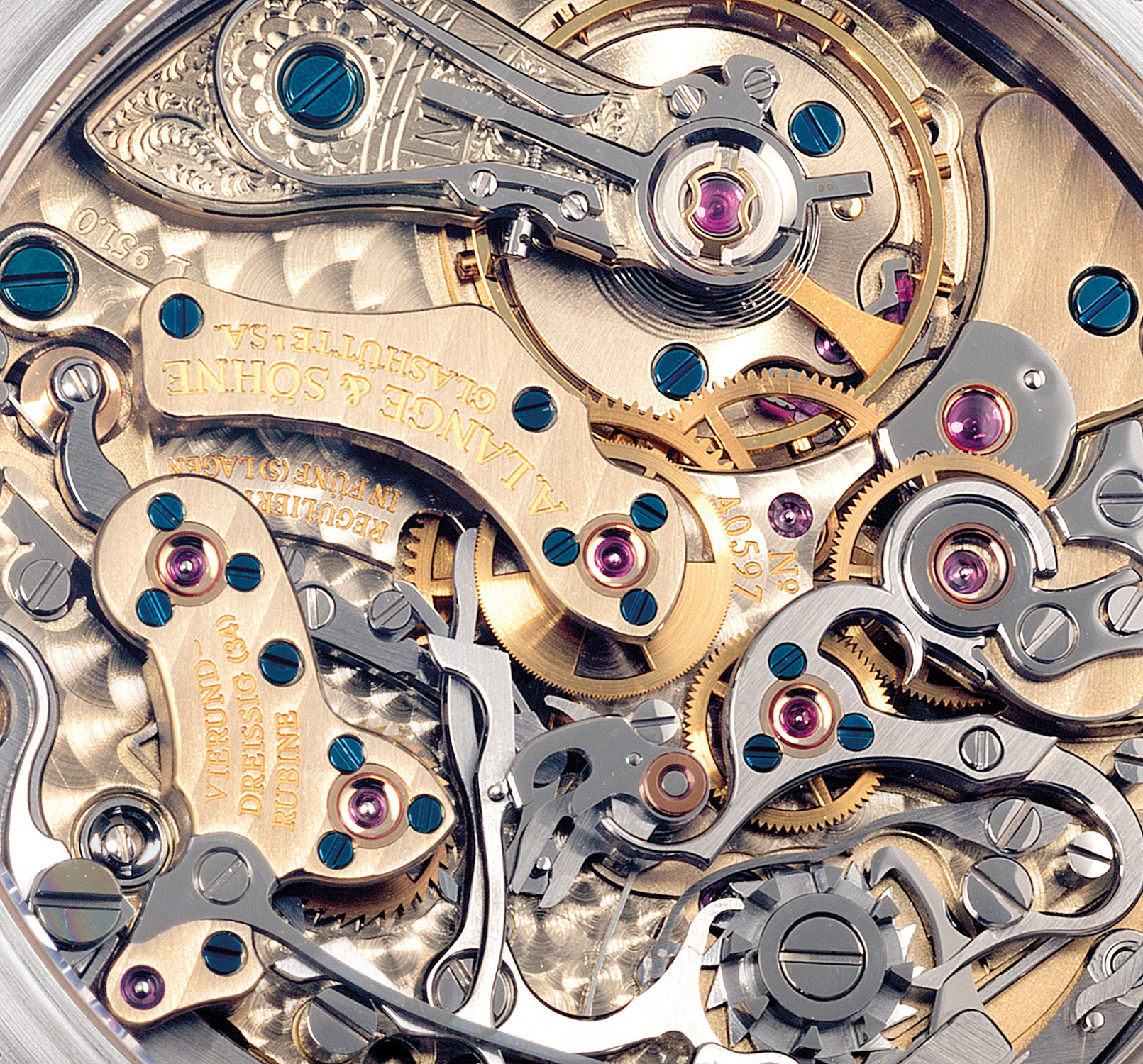 This is a first-generation 1815 Chronograph in white gold with a silver dial. It has a clean and almost monochromatic look, with the blued steel hands offered the only hint of colour.

The Patrimony Traditionnelle Chronograph is no longer in production, but was in the catalogue long enough it is encountered fairly often on the secondary market, but inevitably in white or rose gold. This example is uncommon because it is in white and pink gold. Beyond this model, it’s a combination that’s unusual in high-end chronographs in general.

Historically found on certain chronographs of the mid 20th century, the two-tone combination comes from a white gold case with the crown and pushers in pink gold, along with pink gold hour markers and hands. 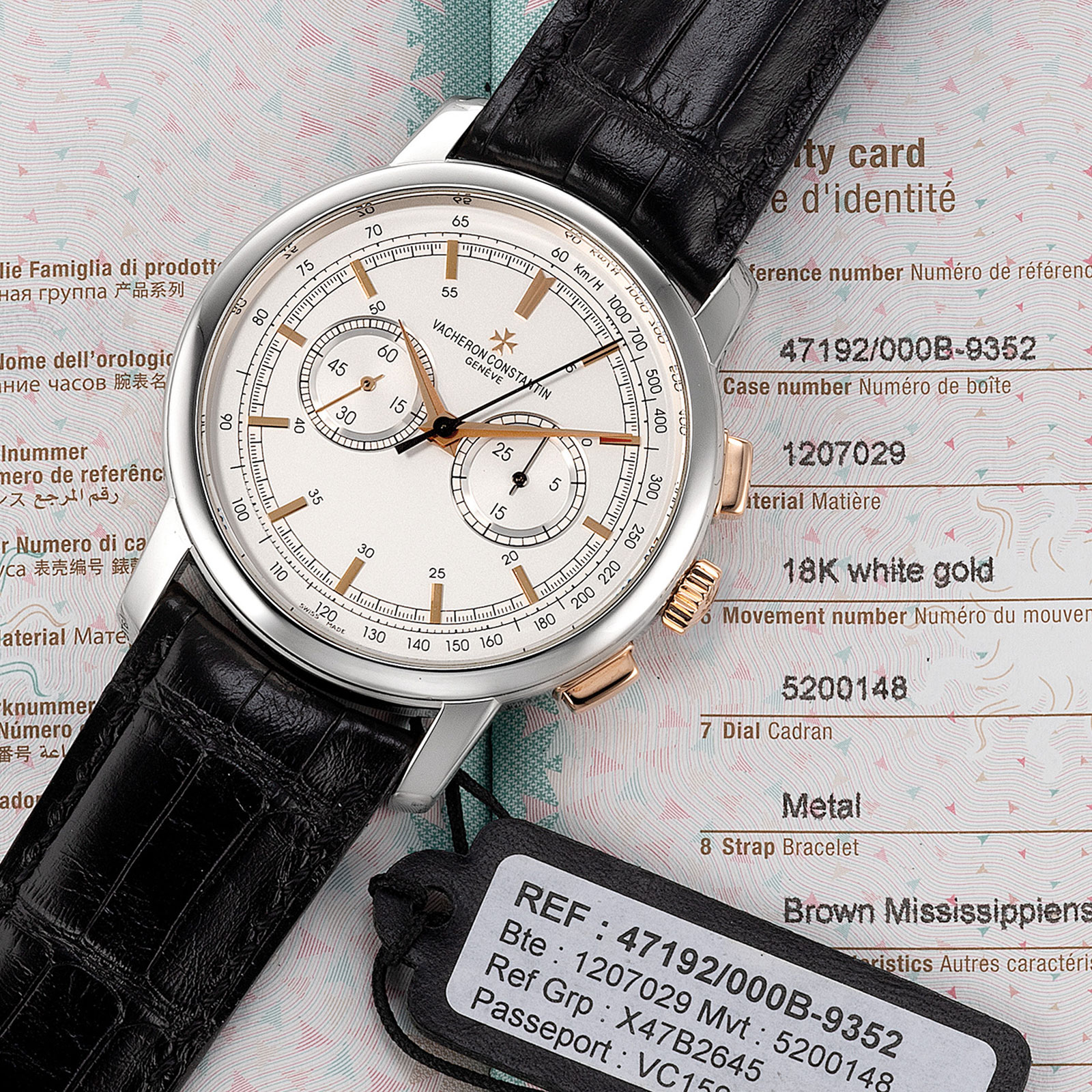 A large but thin watch with an elegant profile, the Traditionnelle Chronograph is powered by a movement derived from the Lemania 2320, perhaps the most famous column-wheel chronograph movement of the late 20th century that was found in watches made by practically every high-end watchmaker, including Patek Philippe and Breguet. 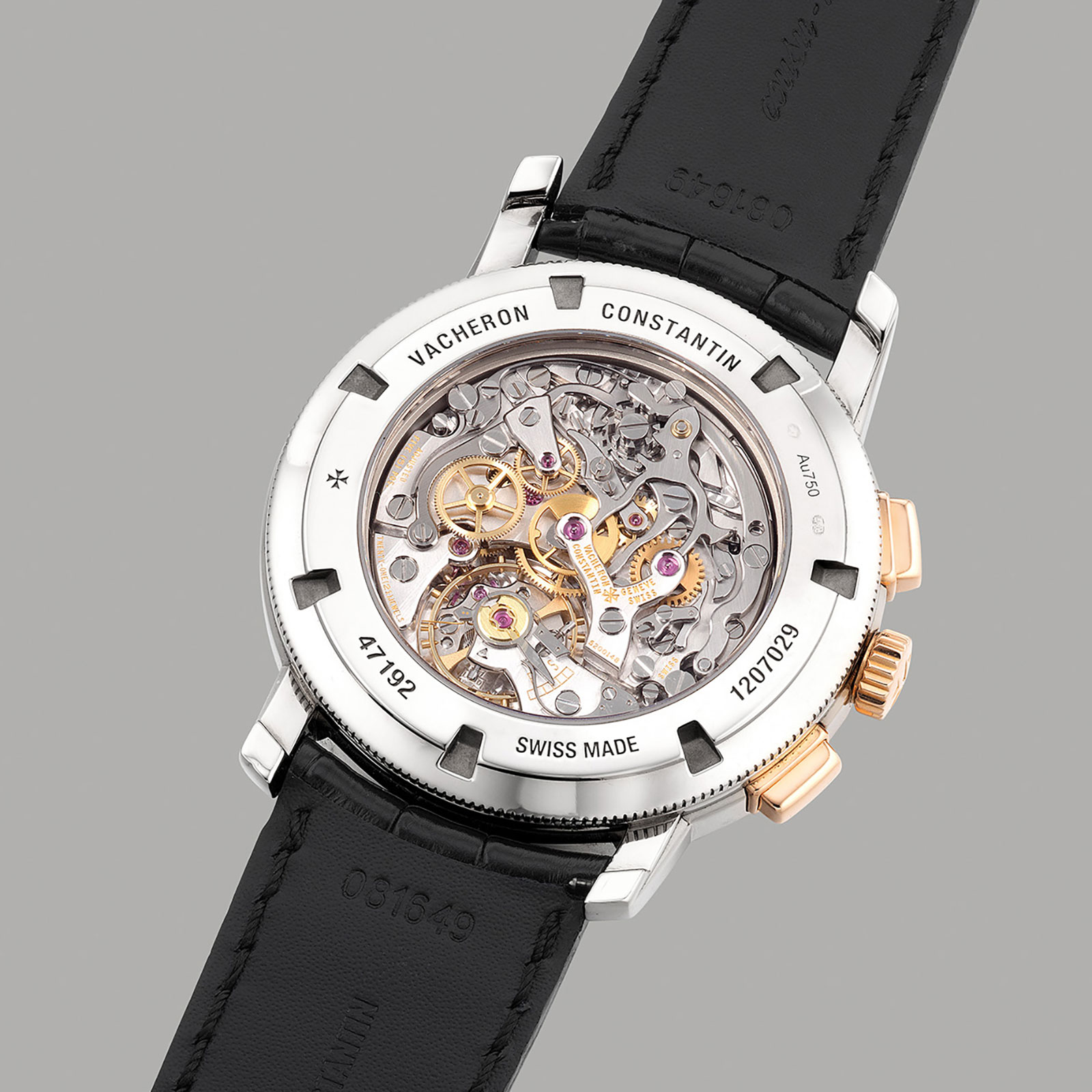 Ordinarily part of a two-piece set that sells for about US$90,000, this Grand Lange 1 Luna Mundi is just half the set, making it extremely affordable – and comparable in price to a standard Lange 1 in fact.

Launched in 2003, the Luna Mundi was a limited edition of 101 sets. Each set was made up of two watches – a Grand Lange 1 Moon Phase in white gold with a display calibrated for the Northern Hemisphere, and a similar watch in pink gold but calibrated for the Southern Hemisphere. This is one of the pink gold watches, and has the Southern Cross constellation on the dial. 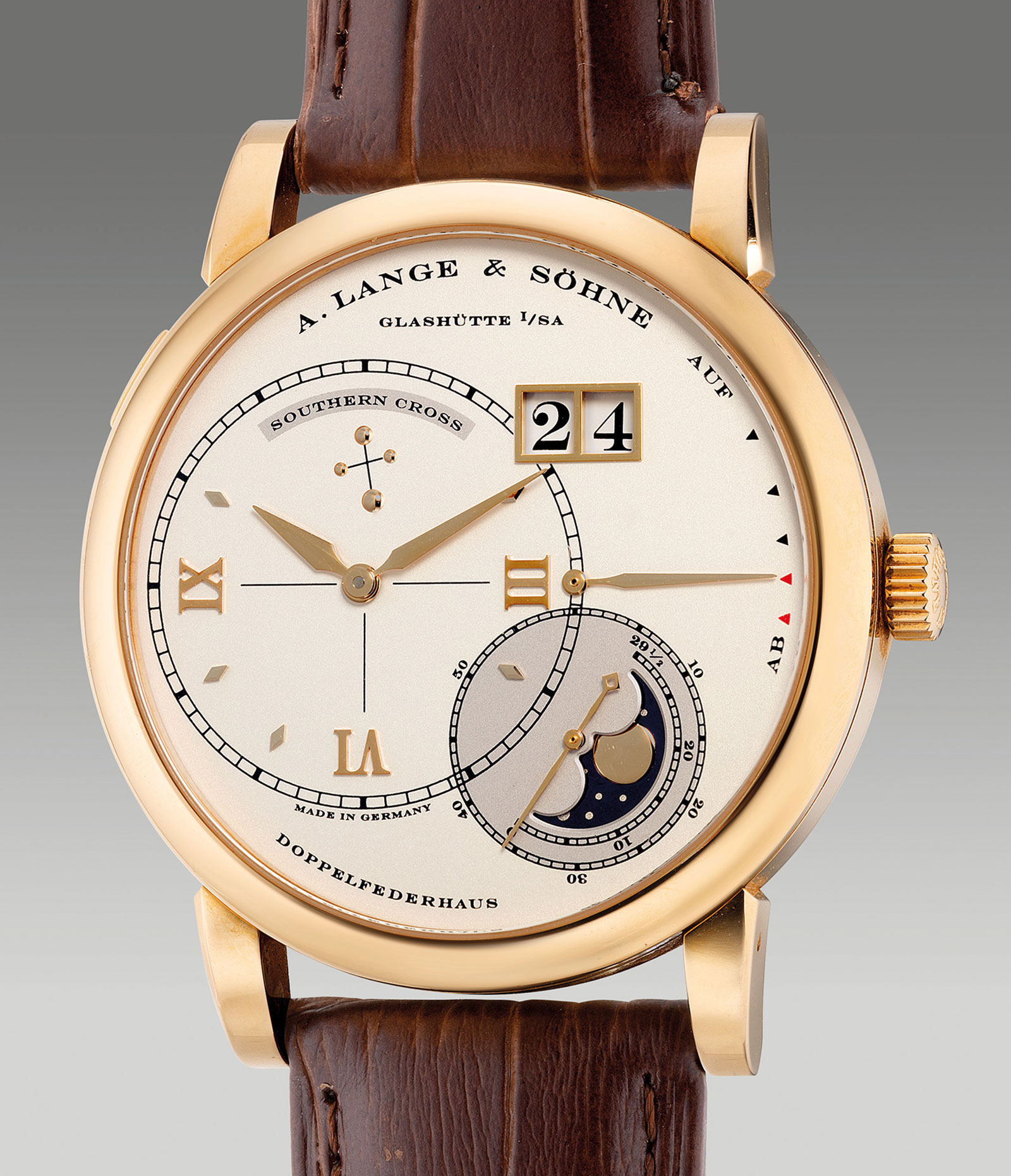 Another both watches do essentially the same thing but for different regions, the pink gold version has a handful more parts in the movement, primarily because the moon phase disc rotates anticlockwise. 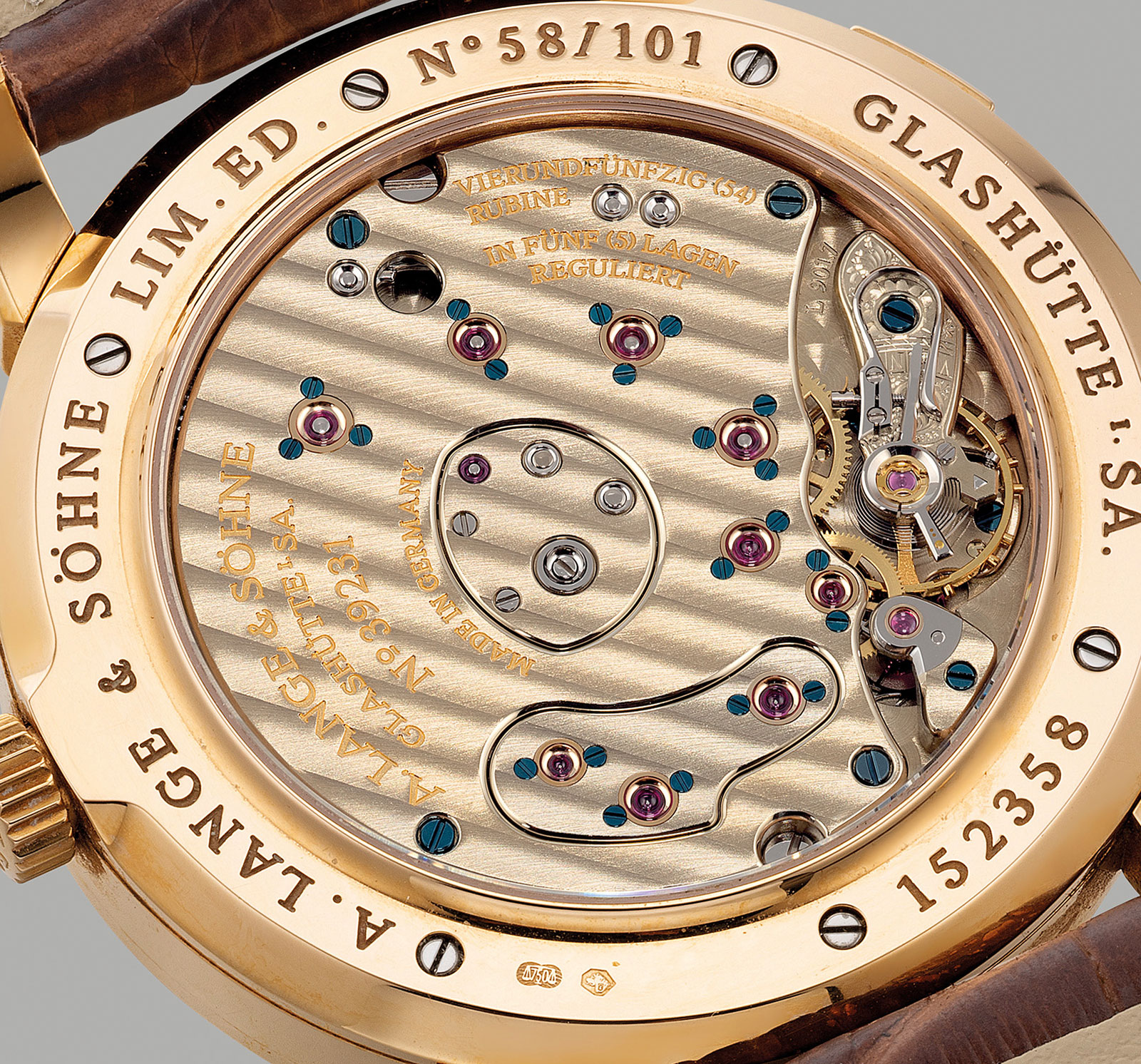 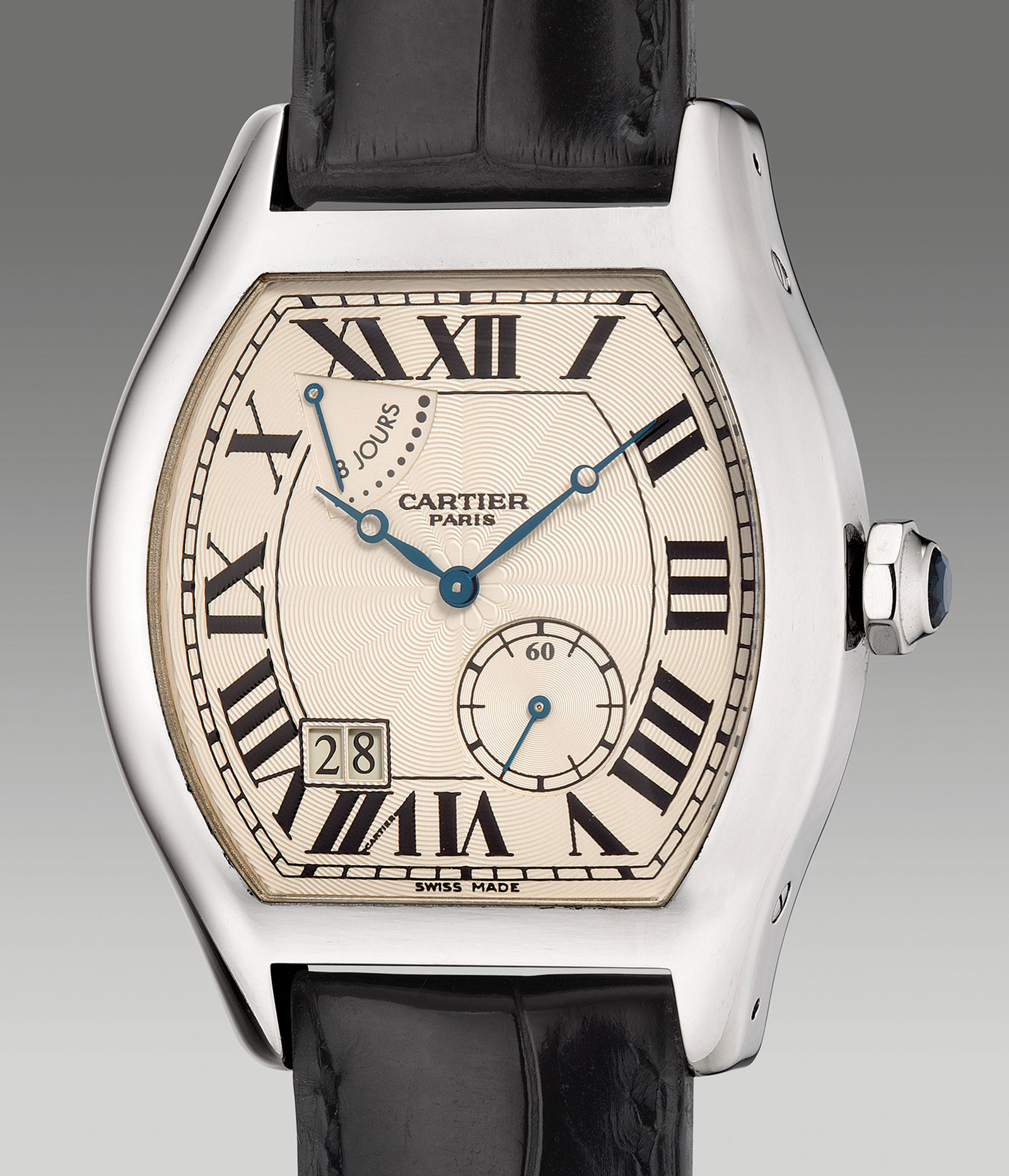 Part of the upscale Collection Privee Cartier Paris (CPCP), the Tortue XL 8 Days is powered by the 9910 MC, which is actually a Jaeger-LeCoultre cal. 876. Unveiled in 2003, the cal. 876 was the first eight-day movement made by Jaeger-LeCoultre in the 21st century.

Mechanically the Cartier version of the movement is identical, having both a big date as well as power reserve indicator. But the decor has been customised for Cartier, with all of the bridges having a stamped double “C” emblem that is a hallmark of the CPCP line. 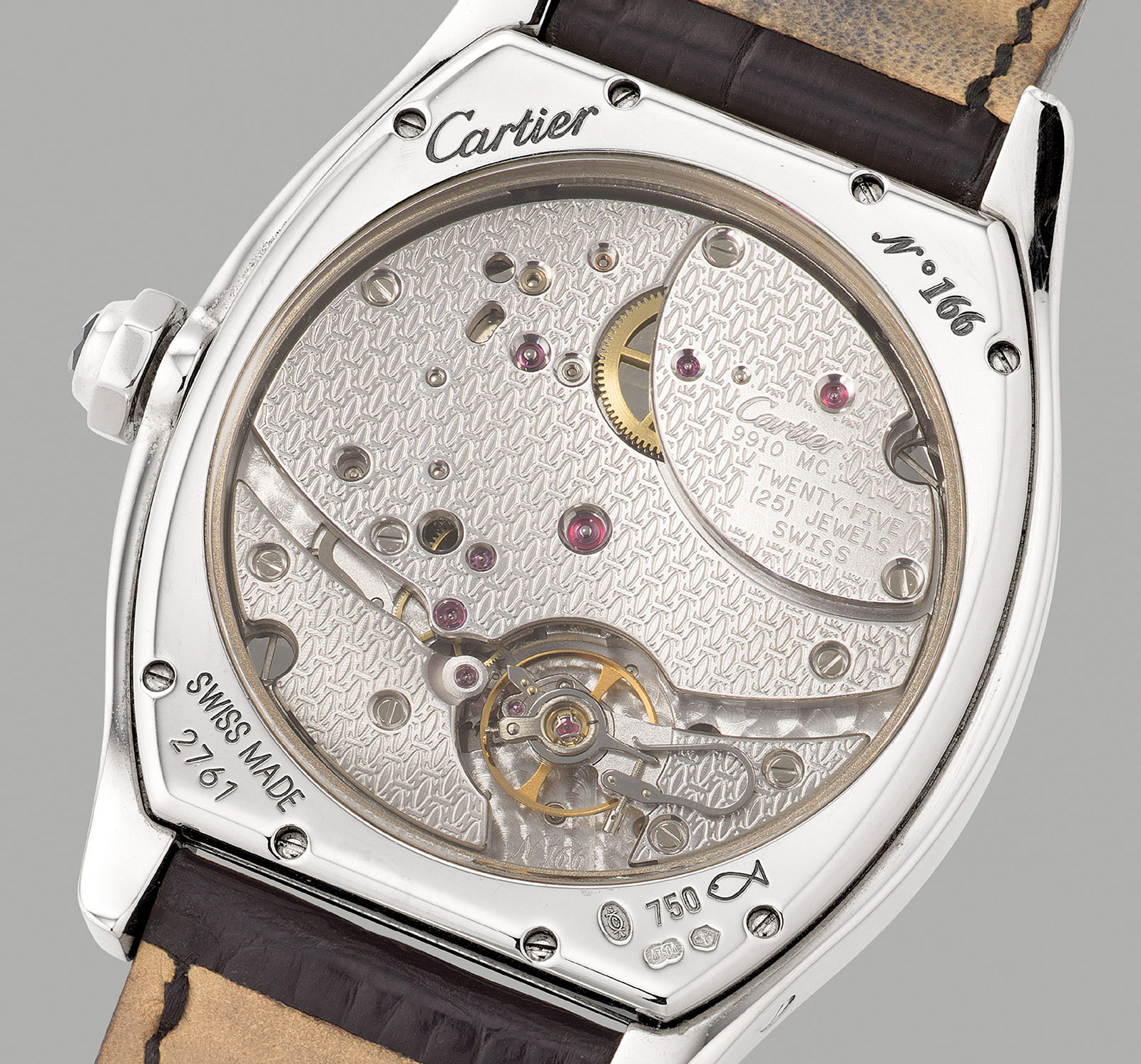 Launched two years ago as a 100-piece limited edition, the 1858 monopusher has a classical, 40 mm case and metallic olive dial, giving it a retro-inspired look that is still clearly contemporary. 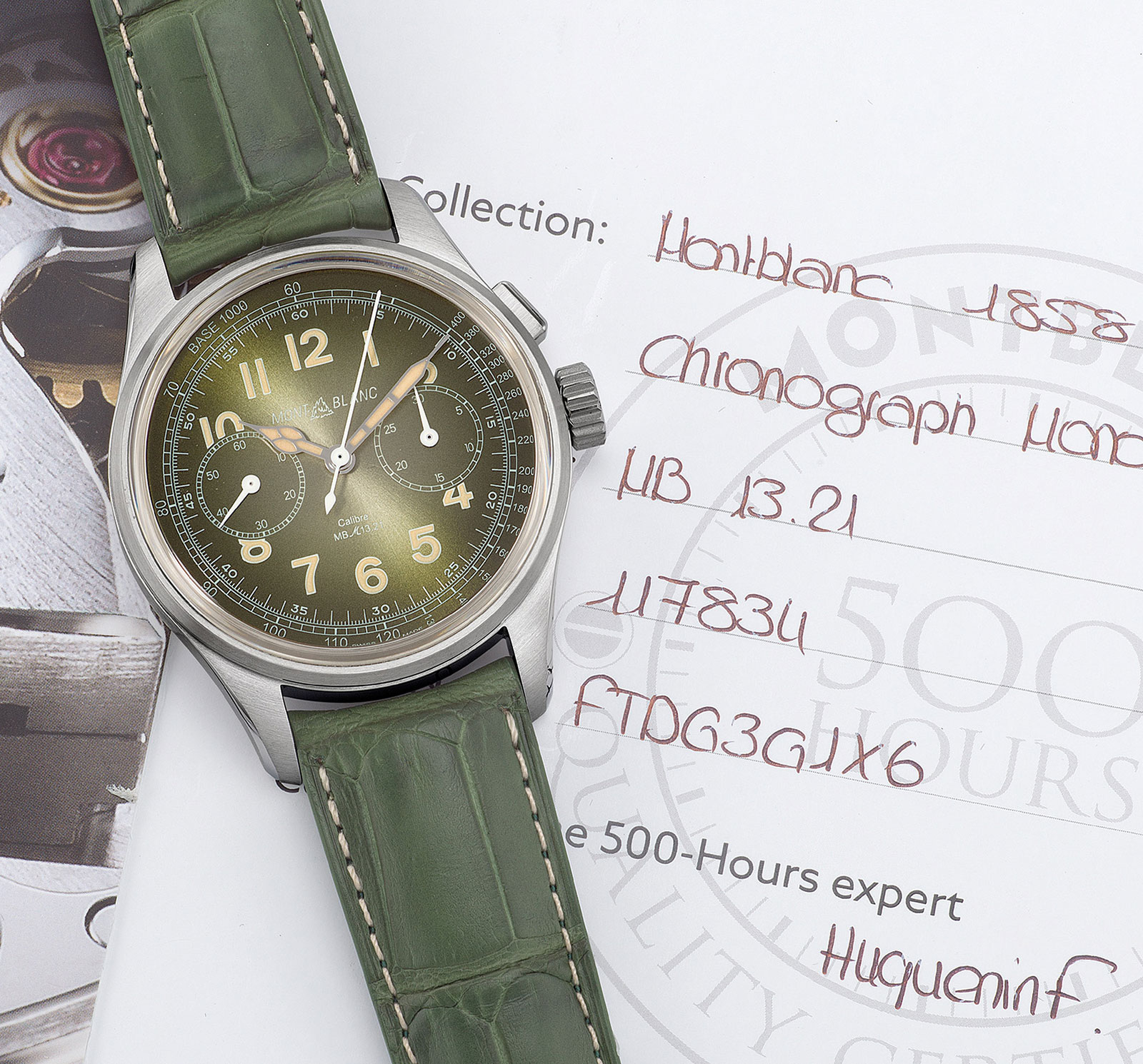 But the highlight is the MB 13.21 movement inside, which is actually a 1940s Minerva calibre reproduced in the modern day – explaining its strikingly traditional aesthetics – and then finished to an extremely high level. In fact, the movement is arguably the best-finished chronograph at this price range, especially with the estimate that starts at just US$12,000. Jaeger-LeCoultre is perhaps the best known maker of mechanical alarm wristwatches, having been one of the first to debut such a complication with the original Memovox in 1951.

A large and imposing watch, the Master Grande Memovox is the ultimate alarm watch – combining the cal. 909 with its signature buzzing alarm with a perpetual calendar module with a year indicator.

All of the calendar indications are on sub-dials as is traditional,

It’s an unusual combination of complications, but arguably a highly practical one: the time, full calendar, as well as a reminder or wake-up function.