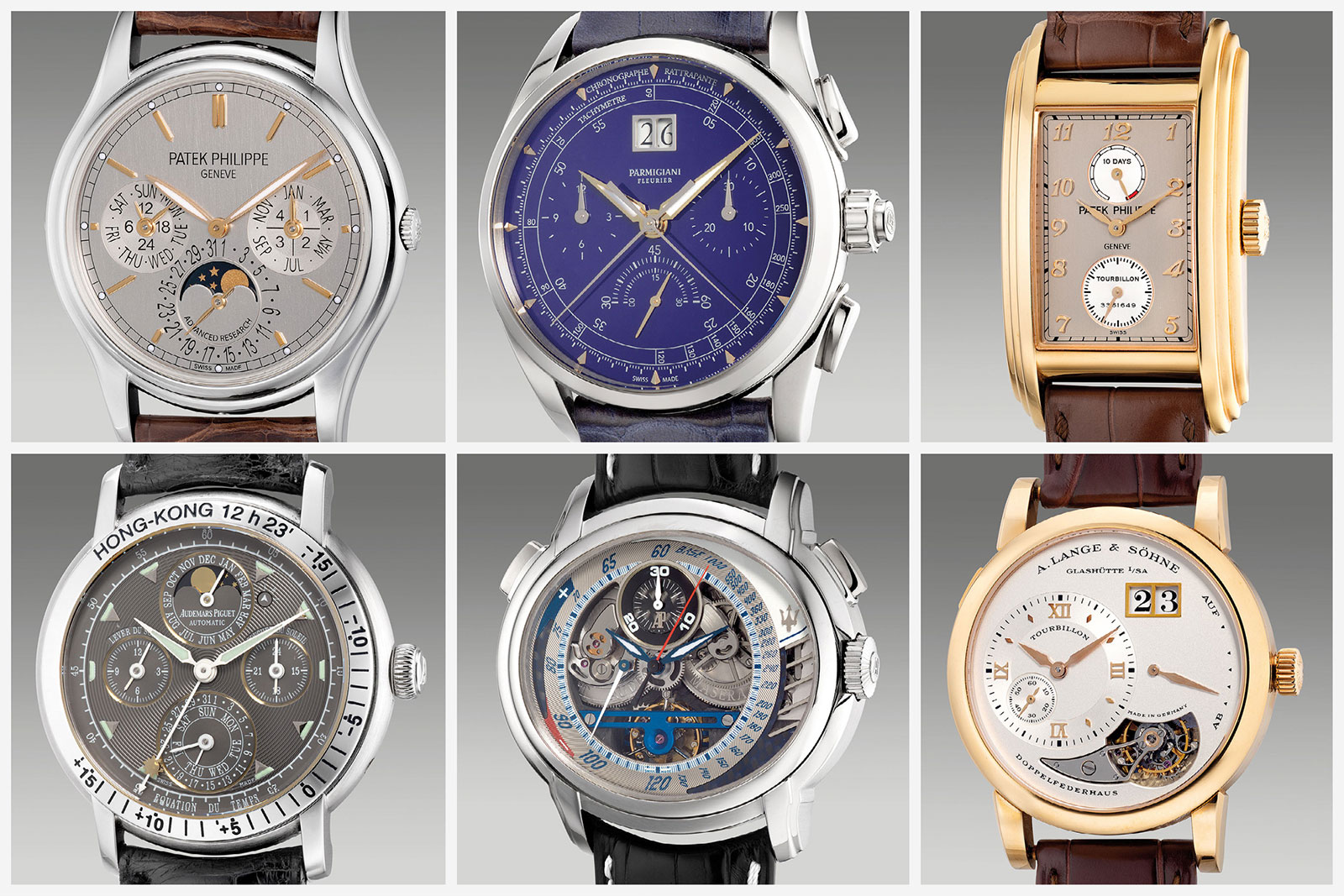 Here’s a look at a few standouts amongst the complicated watches on offer – particularly watches that might go under the radar. It includes the Patek Philippe ref. 5101R 10-Day Tourbillon powered by an under-appreciated but gorgeous movement inspired by the brand’s observatory chronometers, along with the Audemars Piguet MC12, one of the coolest complications in any shape but an octagon to leave Le Brassus.

Despite being overwhelmingly famous for its octagonal luxury-sports watch, Audemars Piguet has produced highly-complicated watches in other case styles. Amongst the most interesting is the Millenary C12, a cutting-edge watch when it was launched in 2006 and inspired by the Maserati MC12 supercar (which was based on the Ferrari Enzo).

Equipped with a hand-wind chronograph movement with a tourbillon, the MC12 is unusual both mechanically and aesthetically. Most obvious is the oval case with a “bullhead” chronograph layout, with the pushers at one and 11 o’clock, which is usually associated with auto-racing chronographs.

The dial is open and the movement partly skeletonised – revealing the two huge barrels – while also utilising exotic materials also found in supercars, like a carbon composite main plate and blued-anodised aluminium bridges. 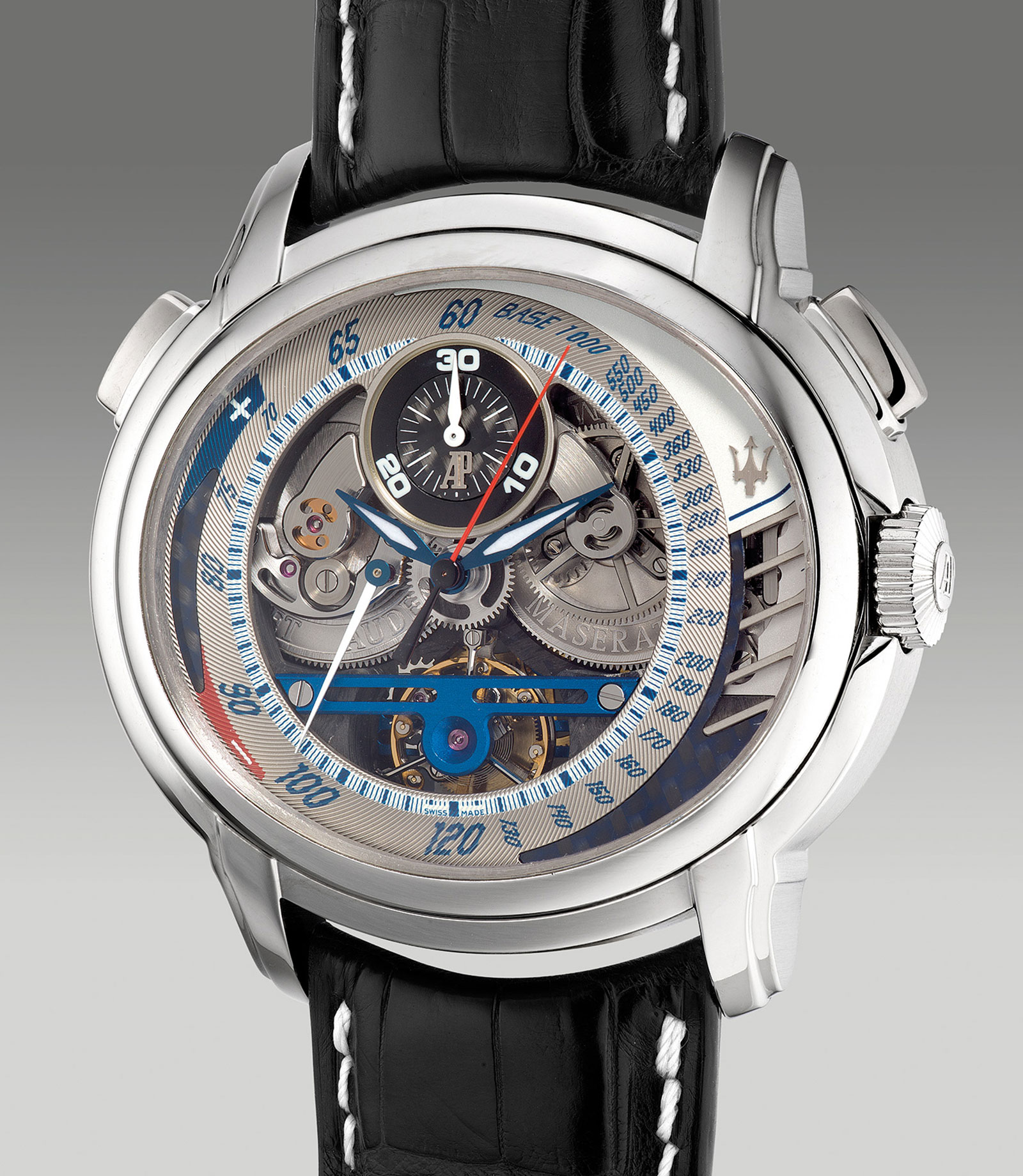 In addition, the movement is has 10-day power reserve – remember this was launched some 14 years ago, making it truly avant-garde at the time. But despite the modern aesthetic, the movement features hand-finished details, such as the black-polished tourbillon cage.

With its 47 mm case made of platinum, the watch has a massive wrist presence. But being wide rather long because of the oval form, it wears well for a watch of this size. Complete with its original box and papers, this has an estimate of HK$390,000-780,000, or US$50,000-100,000, about a quarter of its original retail price. The proceeds from its sale will go to The One Drop Foundation, a charity that helps create access to drinking water in poor communities around the world. Full lot details here.

Another highly complex movement in an unusual case is the Patek Philippe ref. 5101R. Strikingly Art Deco in style, the ref.5101R is one of my favourite lots in the sale. Beautiful, classical, and understated, the watch encapsulates the essence of the brand. When the curved, stepped, and rectangular case is impressive, the highlight is the movement. Marvellously finished, it is also constructed with delicate finesse. The layout is symmetrical and clean, yet possessed of fine details like the inward angles on the bevelling of the barrel bridge, as well as the gorgeously shaped and finished tourbillon bridge.

And the tourbillon bridge is a highlight in itself. Rather than tracing the perimeter of the aperture for the tourbillon cage, each side of the base of the bridge have expressive, pointed corners that are accented by wide bevelling and black polishing. 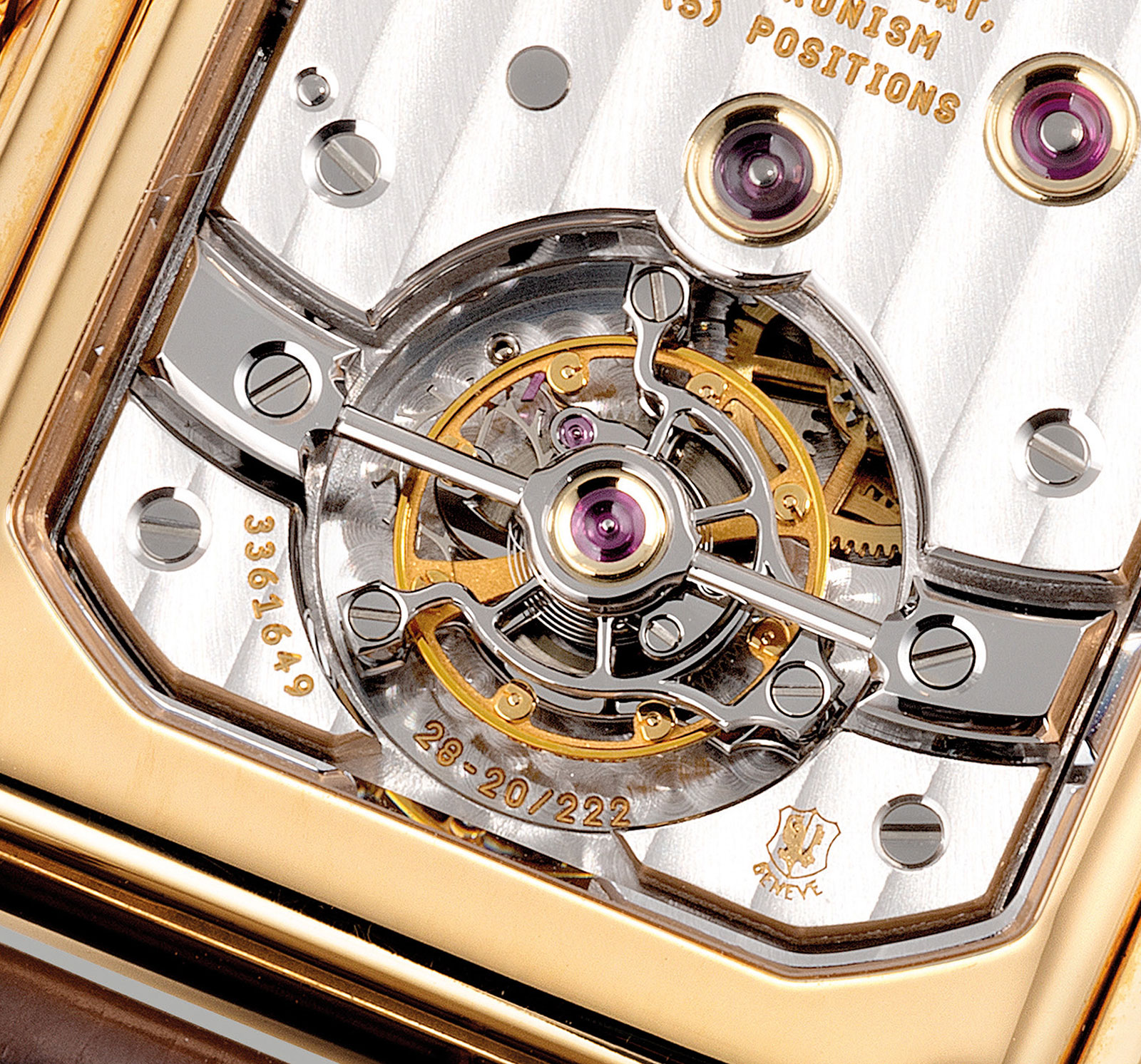 The signature round watch from Audemars Piguet before the Code 11.59, the Jules Audemars line included a variety of complications, including the uncommon equation of time with perpetual calendar.

Because Earth’s axis of rotation is tilted and its orbit around the sun is eccentric, the time it takes for Earth to complete one rotation relative to the Sun changes from day to day – in other words, the length of day is constantly changing. Nevertheless, the length of a day is normalised in mean solar time, which is the conventional, 24-hour day. The difference between the two measurements is the equation of time, which can be as much as 15 minutes. As the current equation of time is location specific, a watch with the complication either needs to be adjustable like the uber-complex Krayon Everywhere, or calibrated for a specific location, as this example is for Hong Kong. That said, the gearing for the location can be changed at the owner’s request, which will also require a change of the bezel.

Being a function related to astronomy, the equation of time often is usually paired with calendar complications – this includes a perpetual calendar as well as sunrise and sunset times. But because the movement is based on an ultra-thin cal. 2121, which was originally a Jaeger-LeCoultre movement, the watch remains slim even with the complications. The quintessential A. Lange & Söhne wristwatch is the Lange 1 with its off-centred dial, a design that is preserved in this watch, which is equipped with a tourbillon. Anchored by a wedge-shaped bridge that traces the curve of the sub-dial for the time, the tourbillon is partially hidden by the dial, making it relatively discreet. 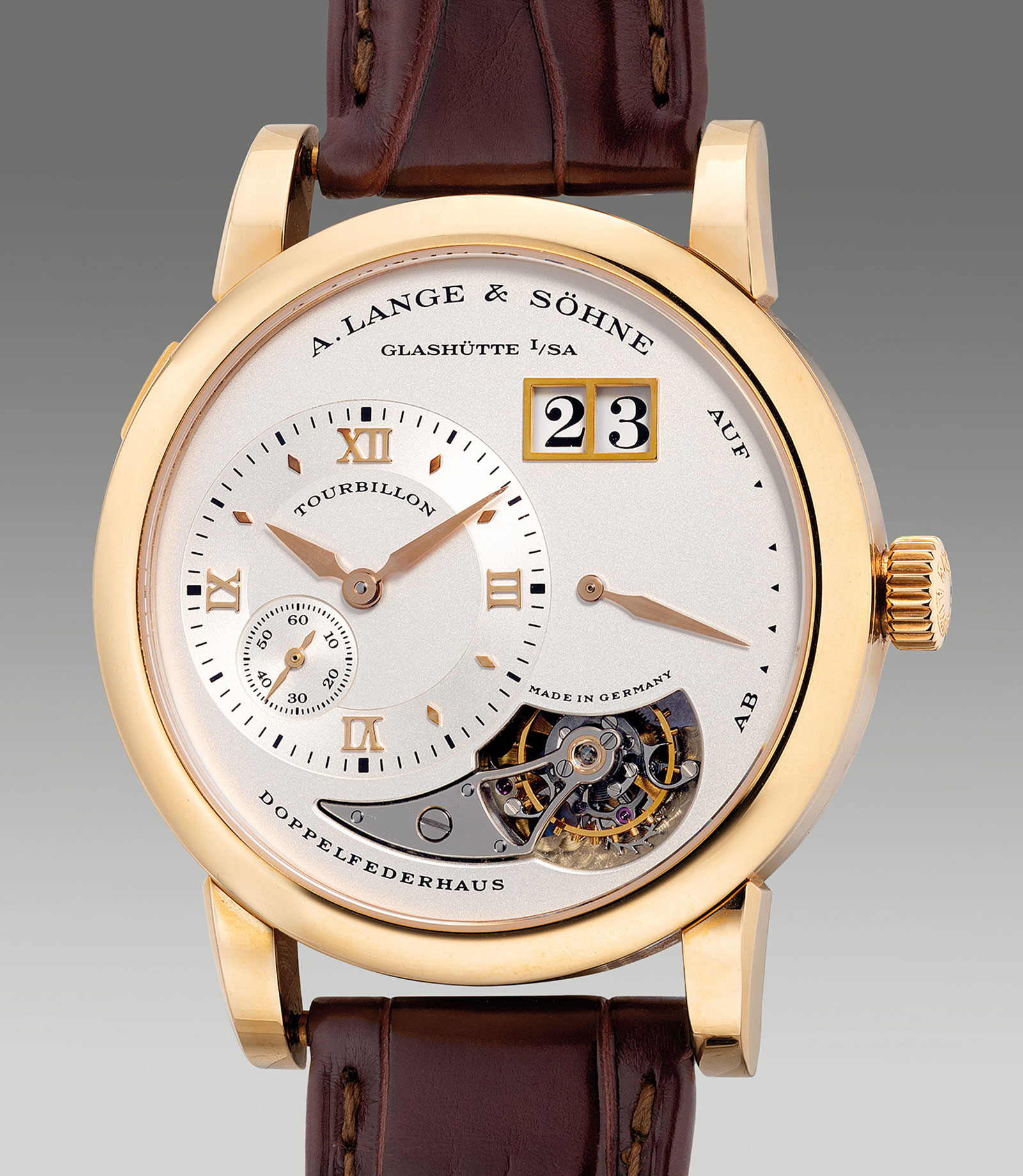 Launched in the early 2000, the Lange 1 Tourbillon was limited to 250 pieces in pink gold and 150 pieces in platinum. It never really caught on – perhaps because the tourbillon is not entirely visible – despite having many significant qualities synonymous with Lange – namely the unique dial design and excellent movement finished. 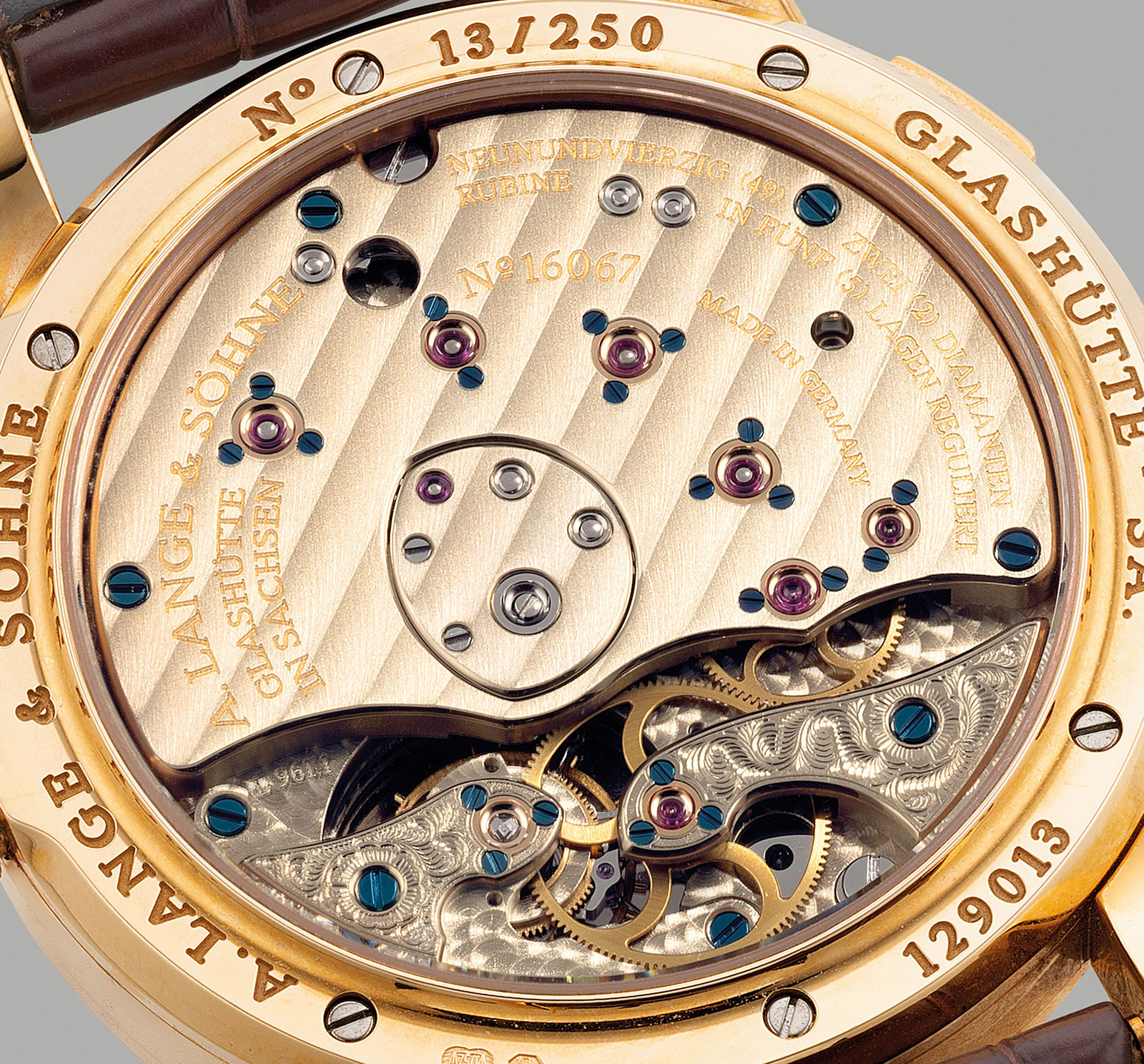 Initiated in 2005, the Advanced Research programme started out as collaboration between Patek Philippe and Swiss institute CSEM to develop silicon parts for mechanical watch movements. Spanning a little over a decade, there were five instalments in Advanced Research, each successive watch progressively equipping a large portion of the movement with silicon parts, although the most recent Advanced Research model explored compliant mechanisms instead.

The fourth watch of the series, the ref. 5550P is special for two reasons. For one, it marked the first time the entire regulating organ – the pallet fork, escape wheel, balance wheel, and balance spring – was entirely made of silicon. 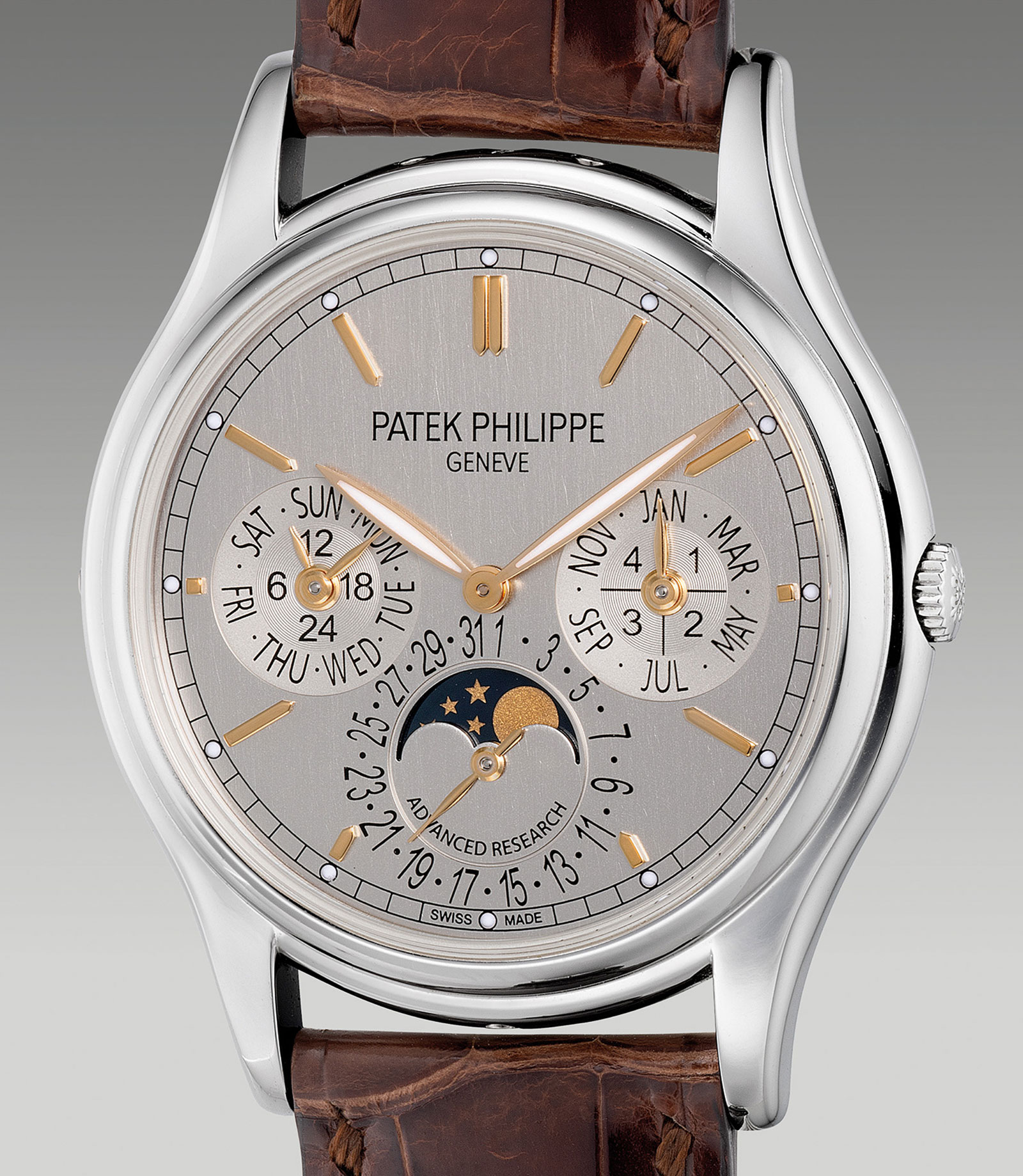 Resistant to magnetism and temperature fluctuations, silicon is useful in achieving better timekeeping. At the same time, the material improves the efficiency of the movement, which is evident in the power reserve of the movement almost double compared to a stock cal. 240 Q. The second reason the ref. 5550P is unique is the complication: it’s the only perpetual calendar in the Advanced Research series, having been preceded by three annual calendar watches and succeeded by a dual-time watch. And it is also the watch in the series equipped with the cal. 240 featuring a micro-rotor. 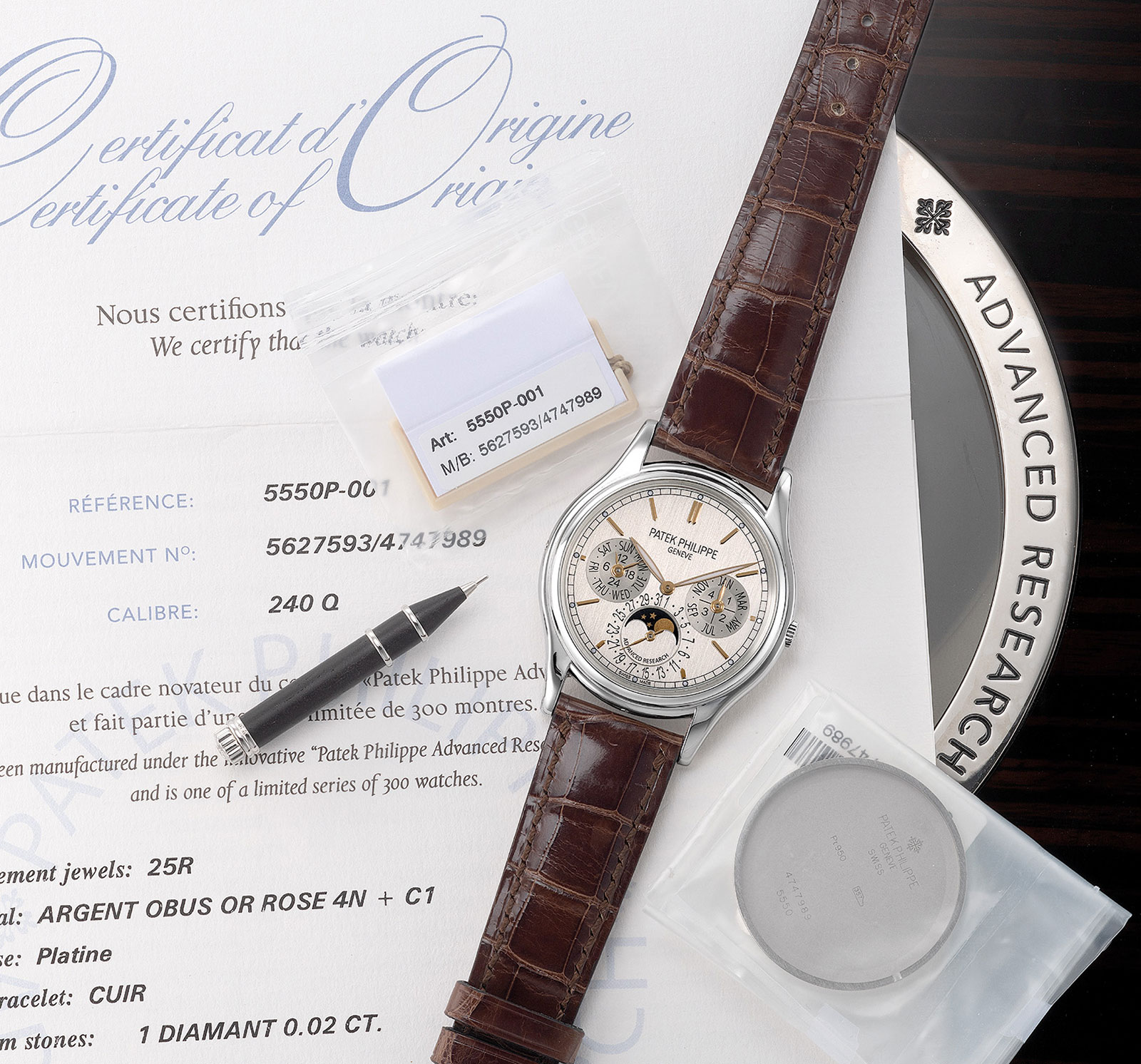 This watch has all of its original packaging and accessories – no doubt an important for a limited edition – and is estimated at HK$390,000-780,000, or US$50,000-100,000, which is relatively modest sum considering the technical qualities of the watch, its significance in Patek Philippe history, as well as its rarity, with only 300 pieces made. Full lot details here.

Complicated pocket watches are almost always overlooked, which means they can be had for relatively little. This Audemars Piguet perpetual calendar pocket watch is expertly skeletonised and exquisitely finished – making it strong value with its estimate of just HK$120,000-195,000, or US$15,400-25,000.

Very much a timepiece typical of the 1980s – just after the Quartz Crisis as the renaissance of mechanical watchmaking began – the watch has a traditional perpetual calendar layout, with four sub-dials indicating day, date, month and moon phase. It has a clear sapphire dial revealing the skeletonised perpetual calendar mechanism. 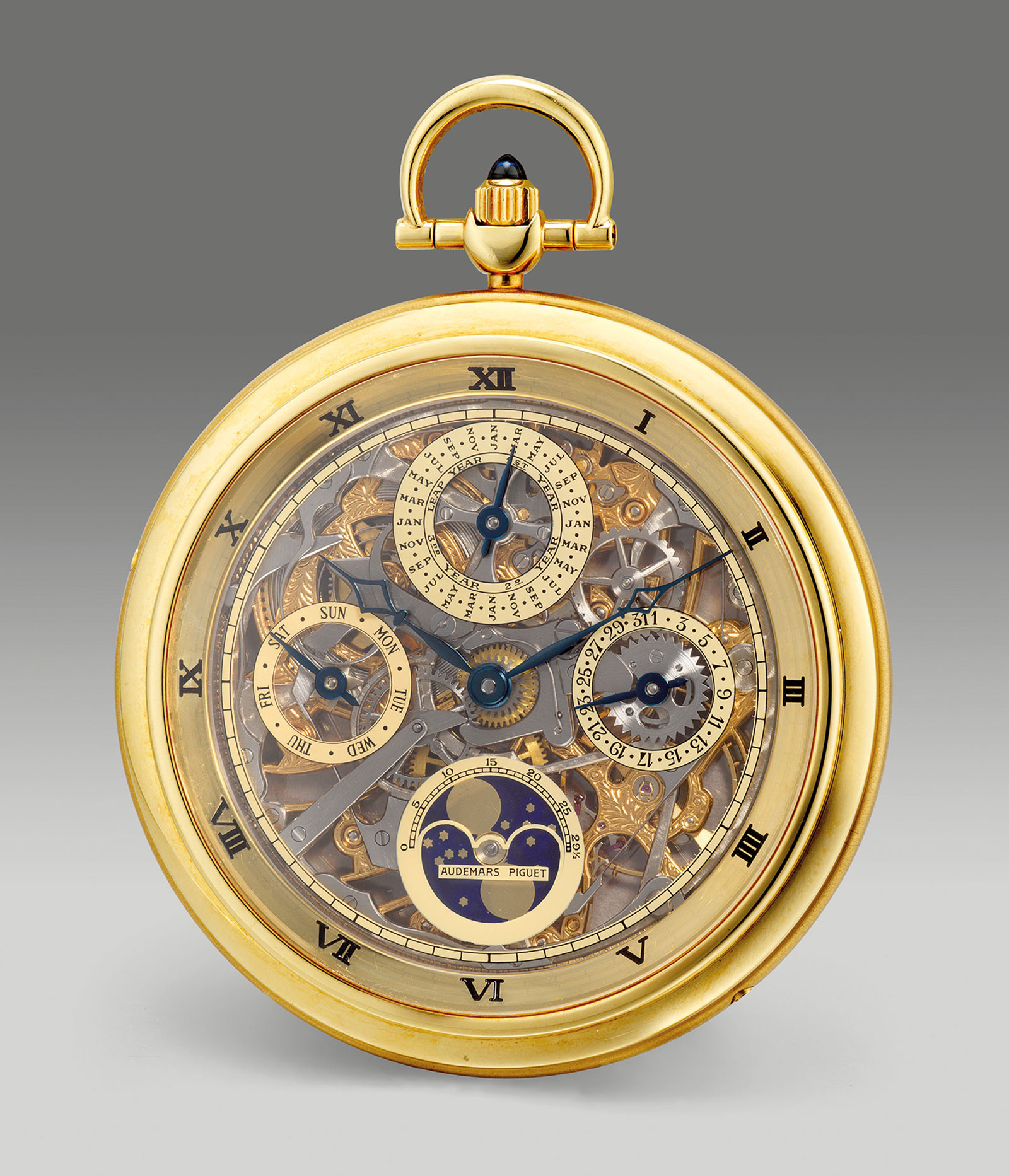 But this is about more than complex mechanics. Skeleton movements of this era were especially refined, and almost entirely finished by hand – from sawing, cutting and filing, to polishing and engraving. The open dial reveals the generously hand-engraved bridges and straight grained steel levers, while the back shows off the slim bridges that have been reduced to the minimum. Full lot details here.

Launched just last year, the Montblanc 1858 Split Second Chronograph is unusual in having a bronze case and a highly-decorated movement, since the metal is more commonly found on “tool” watches. But it works, with tone of the case echoing the multi-scale dial, which is heavily vintage inspired by Minerva wristwatch chronographs of the 1930s. 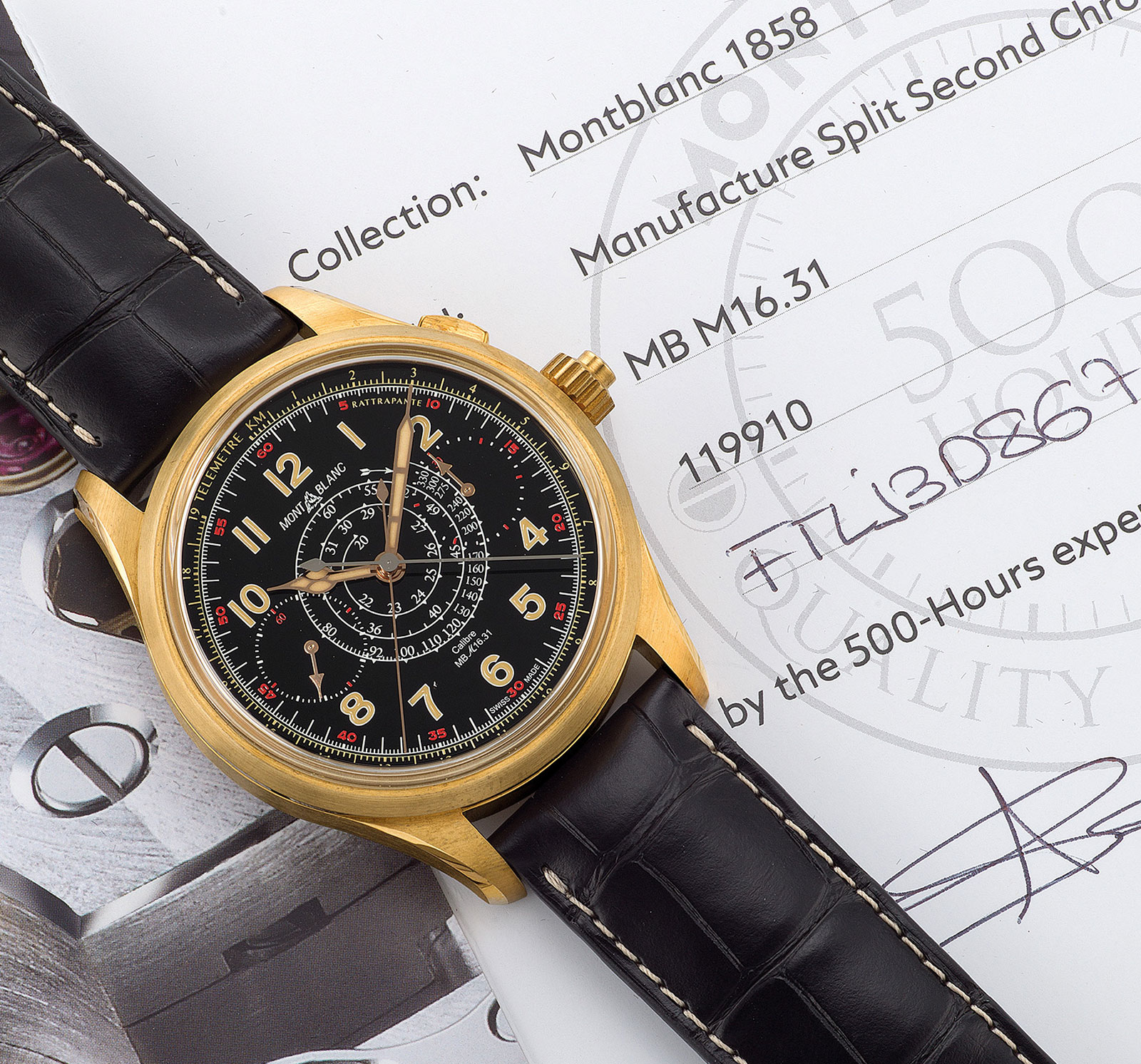 But the best part is found on the back, where the cal. MB M16.31 is revealed in all its glory. Originally a 1930 Minerva movement, the calibre has been refined, improved and decorated extremely well. Already impressive for being a mono-pusher, split-second chronograph, the movement is further enhanced with its exquisite finishing, exemplified by the wide and precise bevelling on the steel levers of the chronograph mechanism and the polished teeth of the barrel ratchet wheel. Already something of a bargain at its original retail price of about US$30,000, this is now even more attractively priced, with an estimate that starts at HK$120,000, or US$15,400. It also has all of its boxes and papers. Full lot details here.

Launched in 2016 to celebrate the 20th birthday of the brand, this chronograph is a lavishly executed watch inside and out. It’s a split-seconds chronograph with a dial in grand feu enamel, case in white gold – and a movement with its bridges and base plate in 18k red gold. In fact, it is arguably one of the best buys in the catalogue, with a low estimate that is a mere tenth of the retail price. But as is usual with high-end chronographs, the view from the back is a treat. The impressive cal. PF361 was the brand’s first integrated, in-house chronograph movement. It has a generous 65-hour power reserve while running at a high frequency of 36,000 vibrations per hour.

More importantly, the movement is impeccably hand-finished, as exemplified by the near-symmetrical and skeletonised bridge that are solid 18k red gold, all of which incorporated numerous interior angles on their finely bevelled edges.