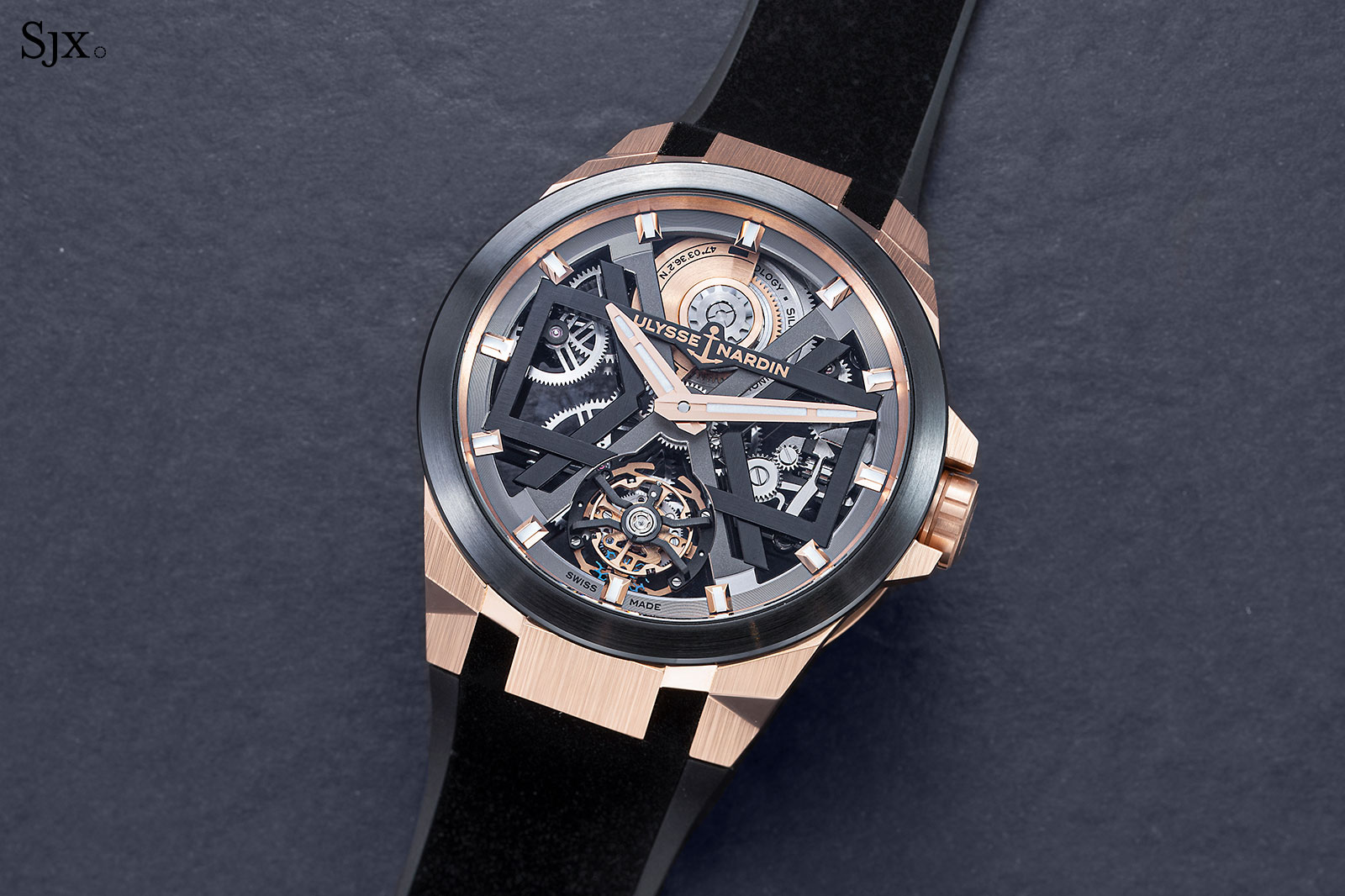 Ulysse Nardin (UN) excels at excellent in-house movements, even for its most affordable, time-only watches. Its watches cases, on the other hand, are typically straightforward – they do the job, but are far from fancy.

Just launched at Geneva Watch Days, the Blast Tourbillon is a step in the fancier-case direction. Fronted by a strikingly facetted – and contrast finished – upper plate, the case of the Blast is novel without being too much (though it is a bit much combined with the “X” skeleton movement). And the Blast also sits surprisingly well on the wrist despite its large size.

But true to UN’s technically-oriented watchmaking, the Blast is not merely new livery for an old movement. Instead the UN-172 movement within is a new calibre featuring an extensively skeletonised construction – that retains the “X” motif the brand is overly fond of – as well as the signature full-kit silicon oscillator.

The Blast combines an interesting case with an elaborate movement – automatic, skeletonised, and a tourbillon featuring a silicon escapement and hairspring – for not very much money as such things go. With the base model retailing for US$44,000 for the base model, the Blast is priced well. 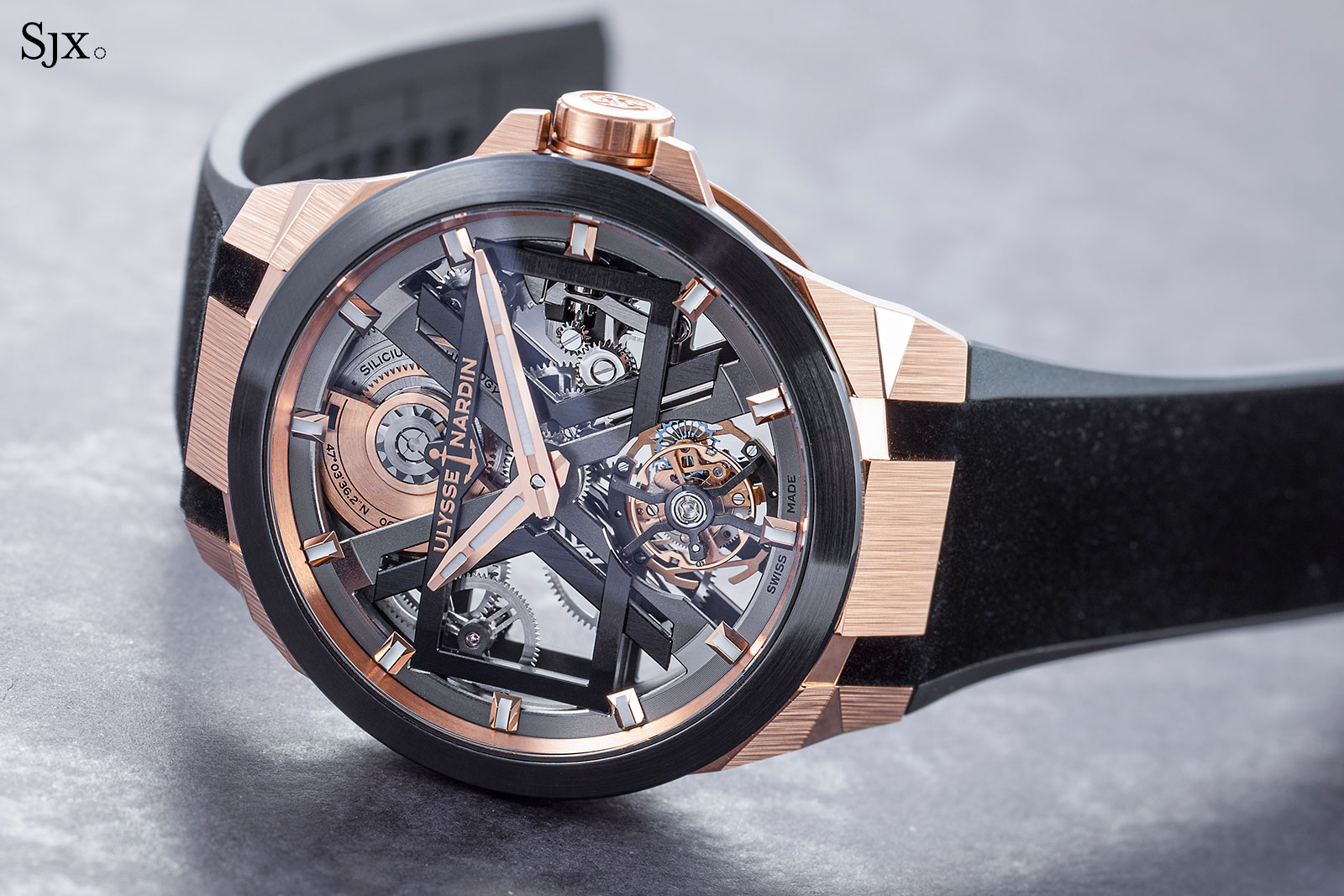 The case is the highlight – finished well and wearable despite its size. The Blast is a big watch at 45 mm in diameter, though it feels notably slimmer than its 13 mm height, partly due to the case height-to-diameter ratio. The fit is good for a watch of this size, mainly because the integrated strap is angled downwards. 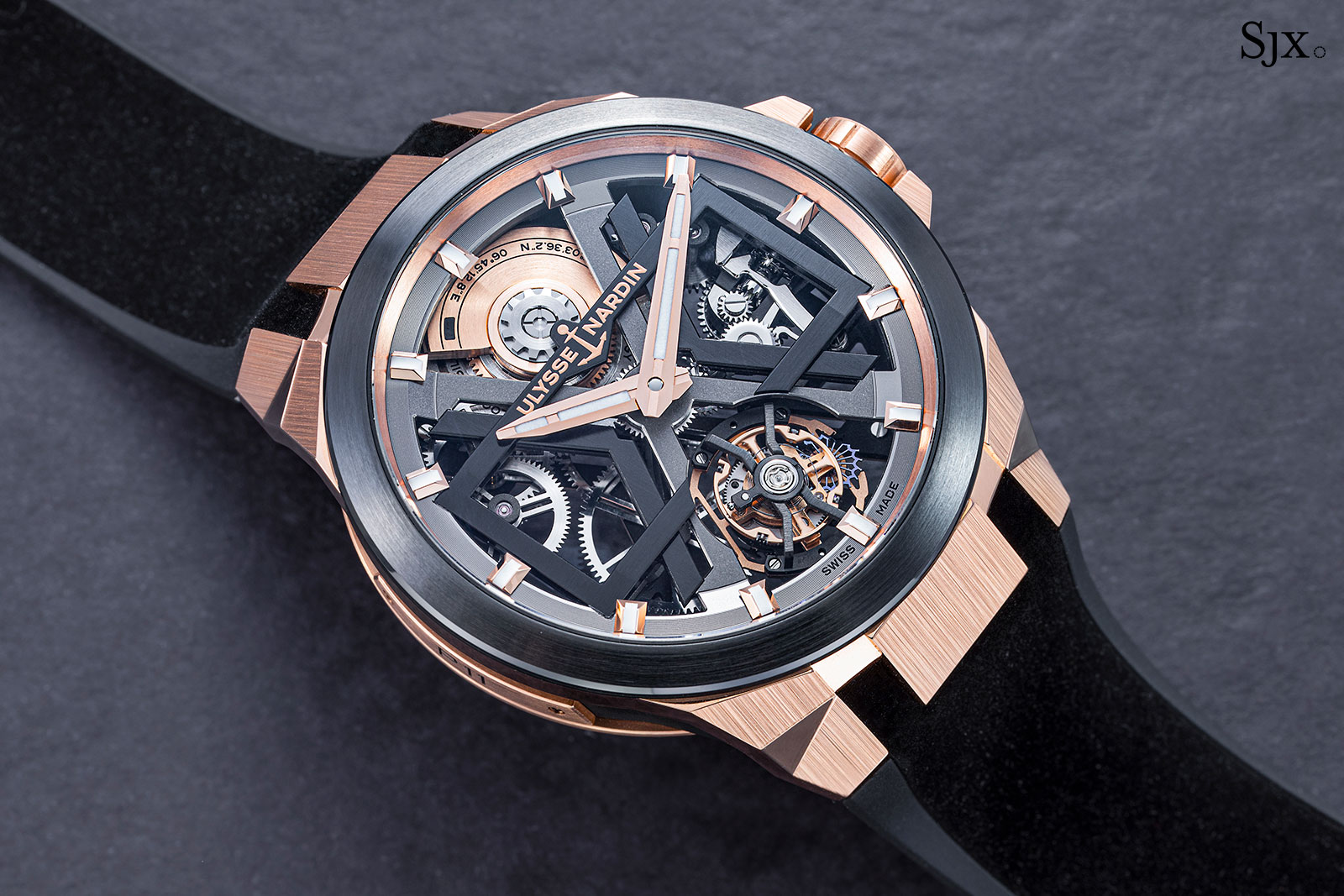 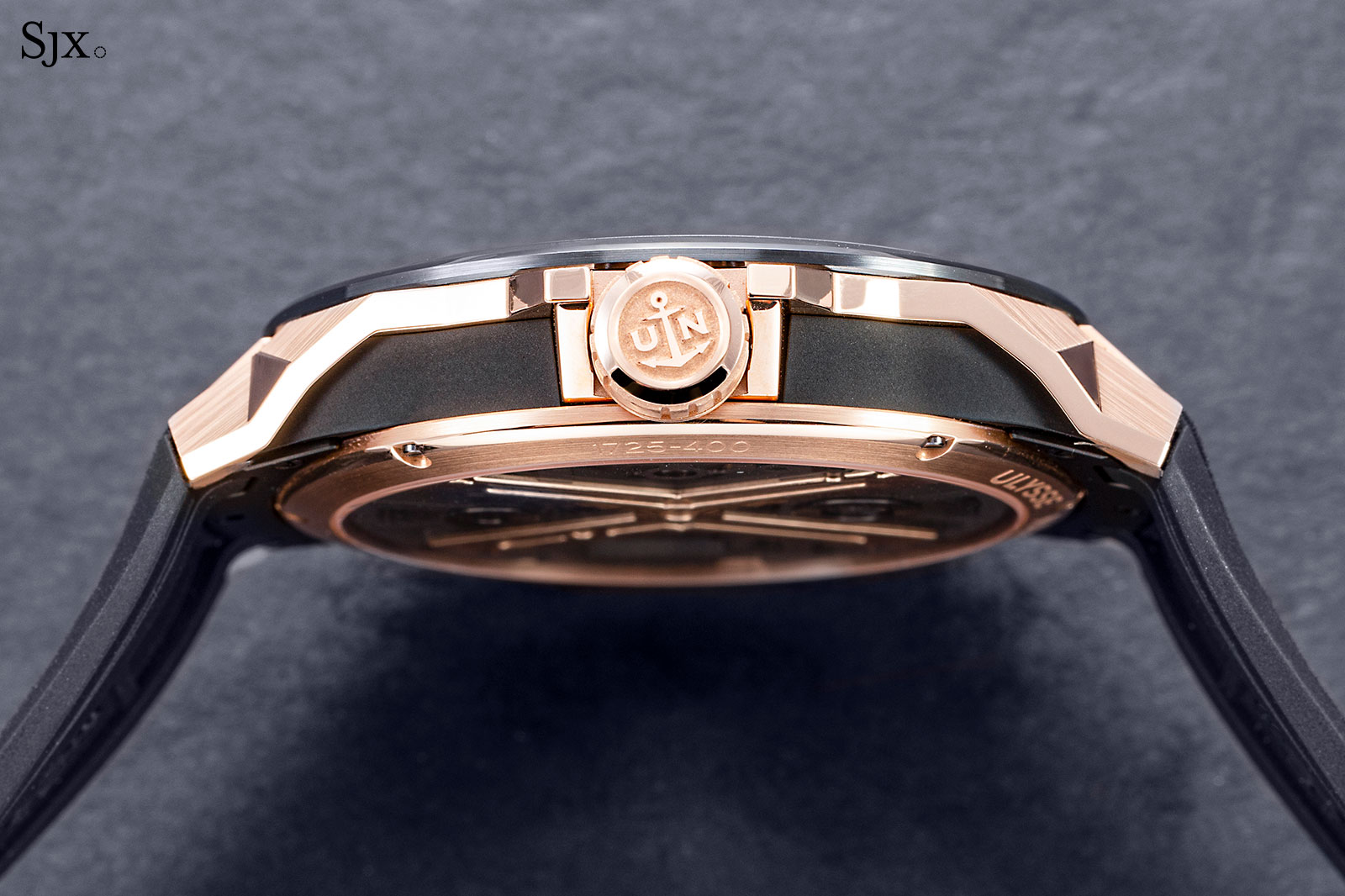 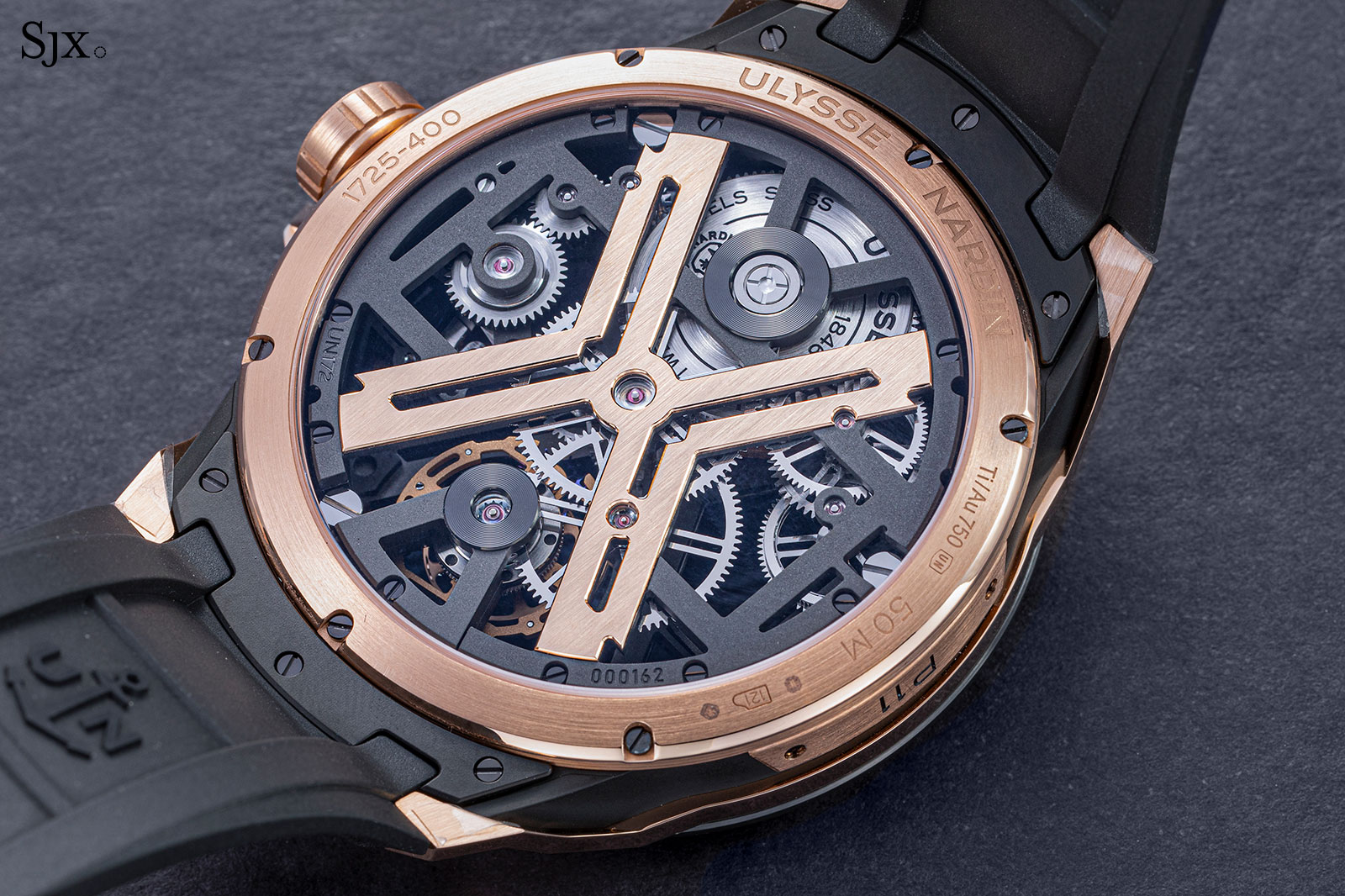 Size aside, it also makes a statement on the wrist. The facetted case is striking, although the open-worked, “X” dial takes attention away from the case. UN has made the “X” motif a central theme of its designs; I am not a fan of the excessive use of “X” – especially when combined with a rectangle – but it’s pretty much unavoidable in the brand’s line-up now.

The design aside, the movement is fully kitted out with all of UN’s innovations, including an in-house, adjustable mass balance wheel, plus a full assortment of silicon parts – escape wheel, pallet lever, and hairspring. It’s a high level of technical content for an accessibly-priced tourbillon. 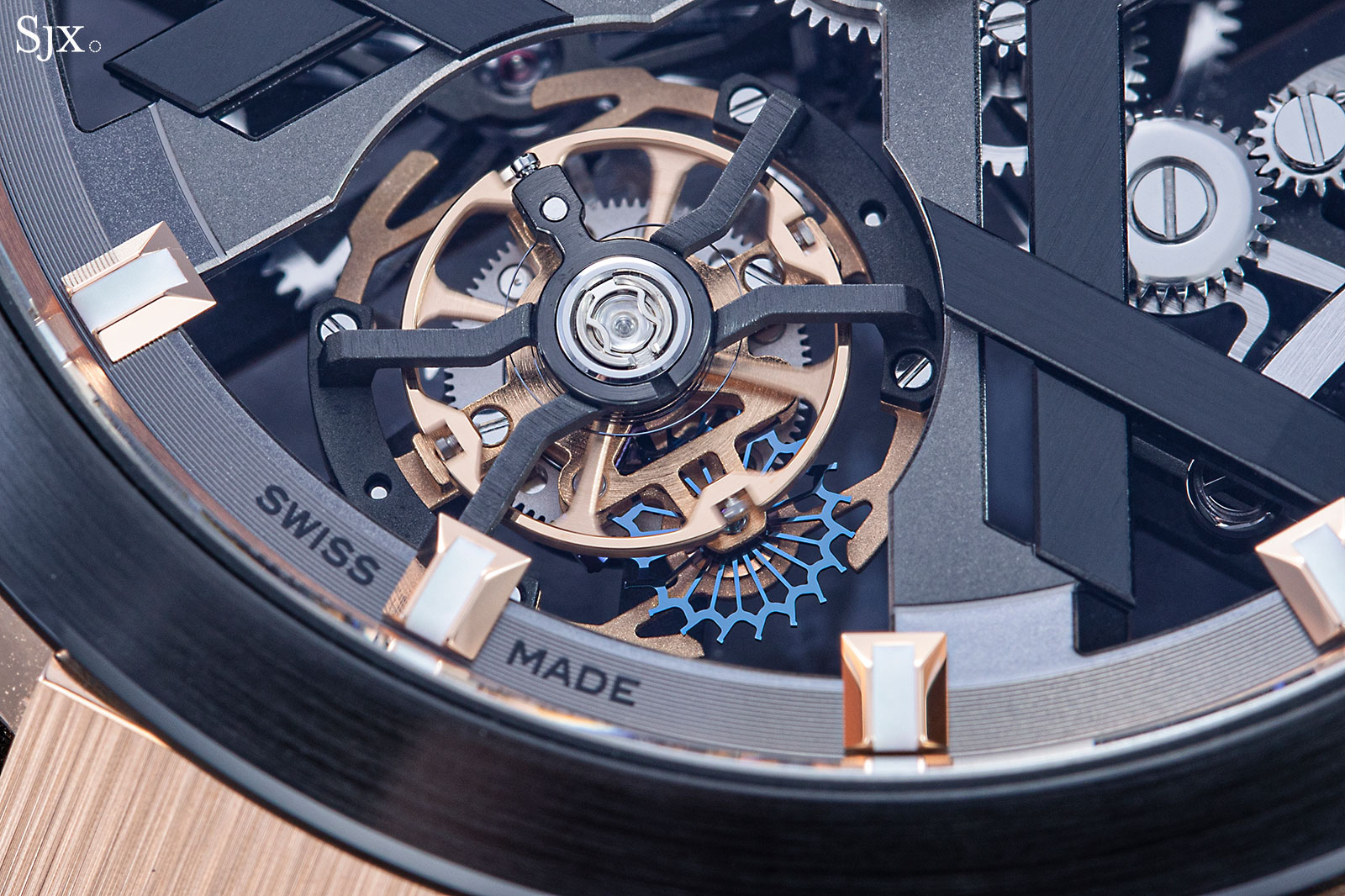 But because both the case and movement are elaborately styled, the two are a bit too much together. I would have preferred the case – which is surprisingly different for a round case – with a plainer dial, or matched with the Freak X, which is more unusual than a tourbillon. 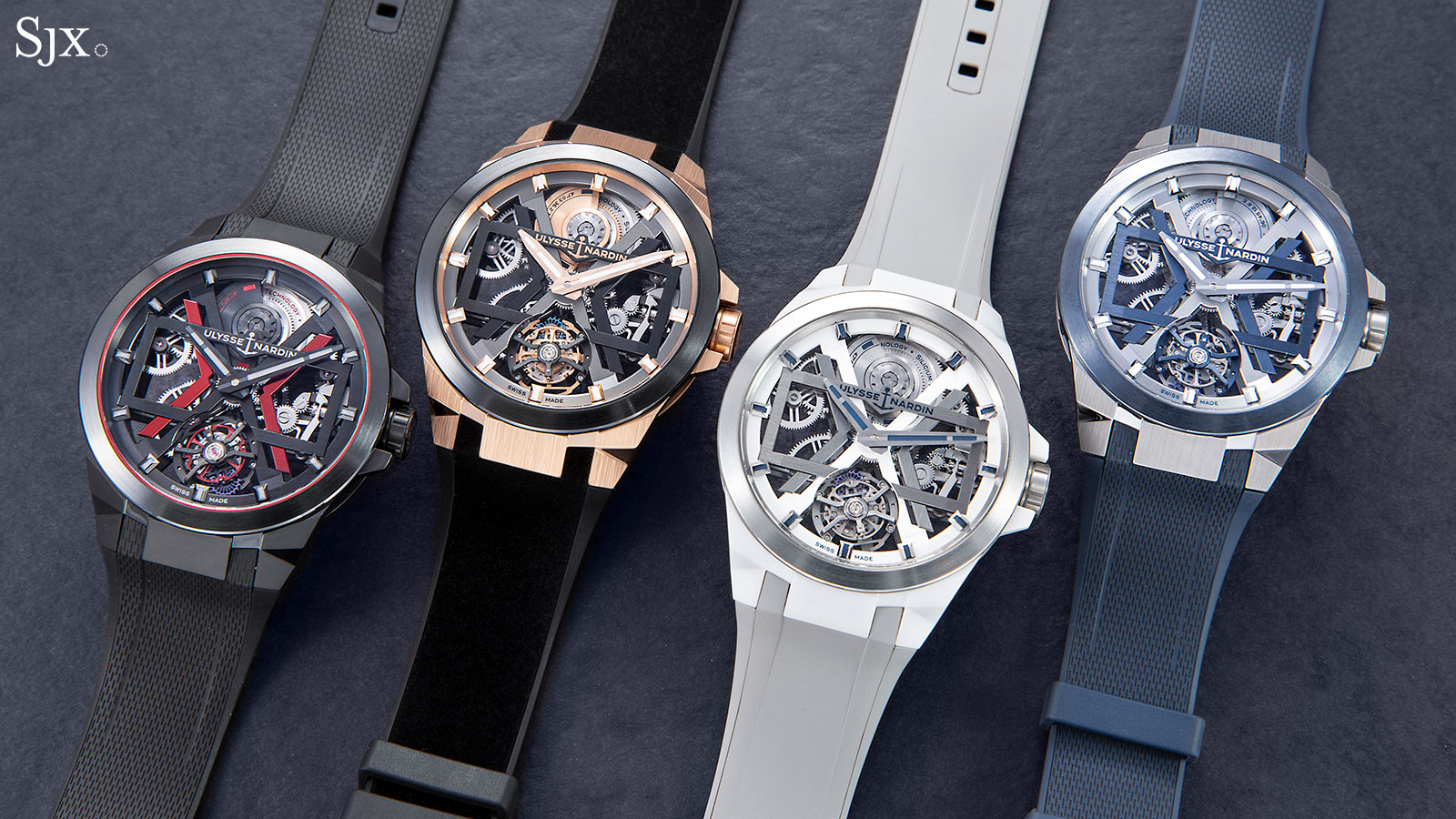 Probably the best looking design from UN in a long while, the case is finished to a high standard. It’s not initially obvious, because the focus of attention is the skeletonised, “X” movement, but the quality of the case is excellent.

The case is essentially a facetted front plate over the middle and back, plus the bezel around the dial. The highlight is the front plate, which has a strikingly facetted form that’s modelled on the F-117 Nighthawk stealth fighter according to UN. In comparison, the cases found on other UN watches range from the clunky to the plain. 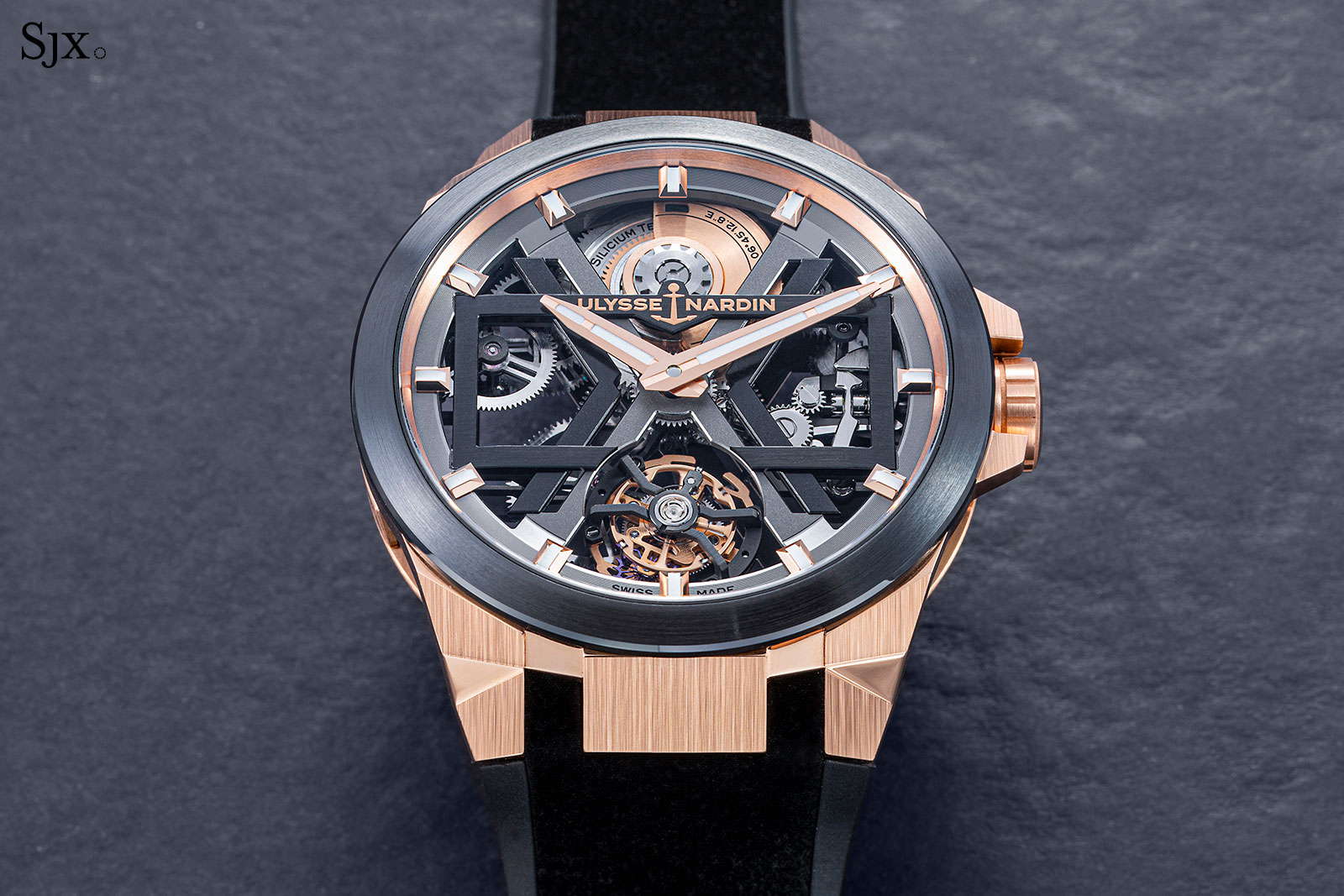 Seen from the side, the case reveals a layer construction that can be found elsewhere; it’s essentially the same multi-material, modular set up that’s standard practice at Richard Mille and Hublot. But here UN has smartly managed to avoid looking derivative by avoiding the tonneau shape or porthole design.

Importantly, the case band is titanium that’s coated in diamond-like carbon (DLC), hence the black finish. I am glad it it is not carbon-fibre composite, which is overly fashionable and sometimes feel out of place in a high-end watch. The bezel is black ceramic, and neatly finished with a brushed top and side, separated by a polished bevel The form and finish of the front plate is excellent, with alternating brushed and polished surfaces across the angled planes that have neatly defined borders between them.

And rose gold is the ideal material for showing off the case finish. Though identically finished, the ceramic versions don’t have the same lustre as the gold model. 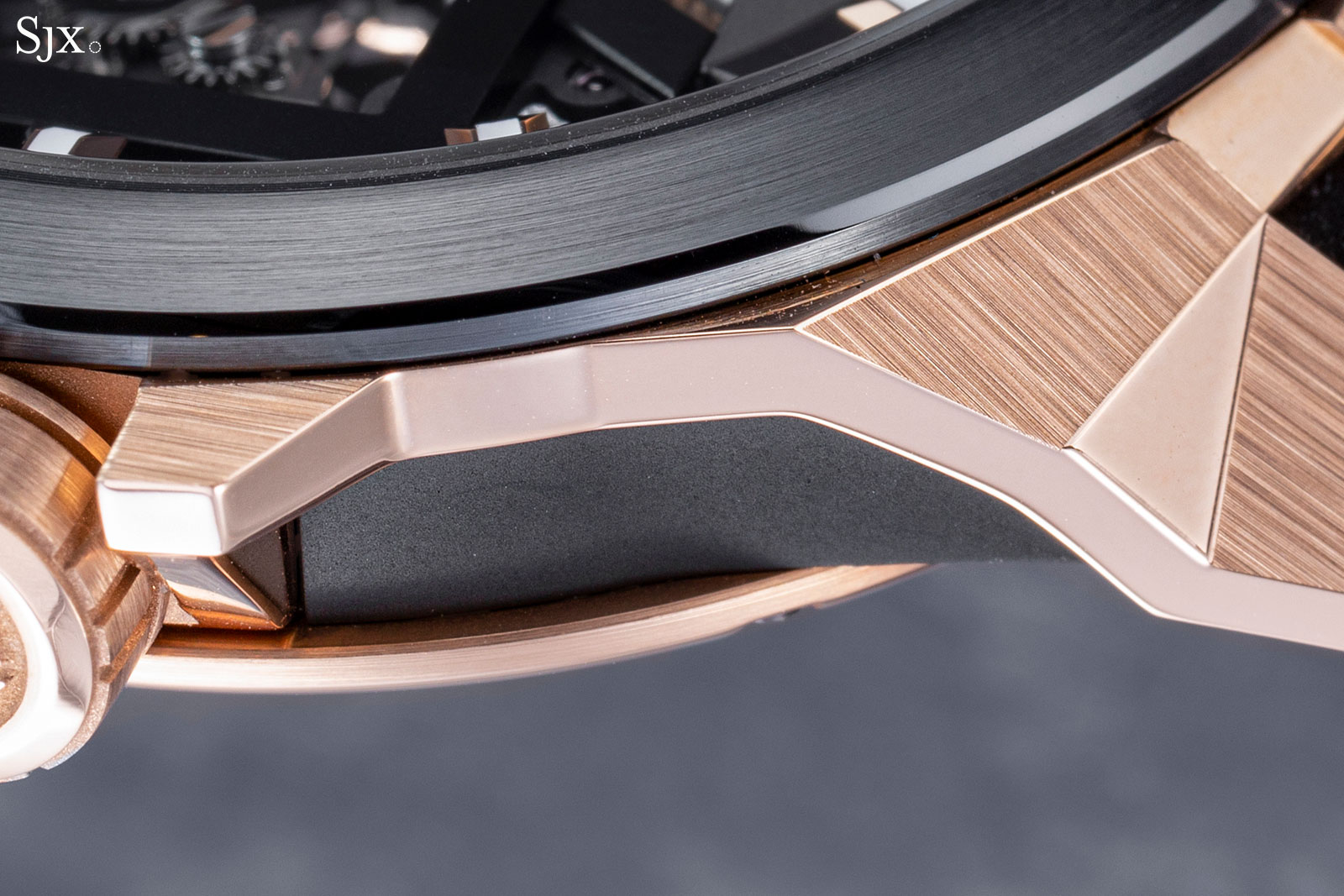 While the case finish scores well, especially given the price of the watch, it could be elevated to another level with polished bevels on the edges of the front plate. Done correctly, that would give the face of the watch the refined, jewel-like appearance found on the Audemars Piguet Royal Oak.

Accomplishing that for the same retail price is no doubt impossible, though it would probably be a worthwhile upgrade for a 10% hike in the price tag. That, unfortunately, is similarly impossible given the economics of Swiss watchmaking, but one can dream. Also new for the Blast is simple yet cleverly-designed folding clasp. Built with double, connected pivots on each end of the blade, the clasp opens in a symmetrical fashion as each “wing” pushes and pulls its opposite as they open.

An effective and useful feature, the clasp is more practical than some of the other designs on the market that try too hard to be different and instead end up bulky or fiddly. That said, the buckle portion of the clasp, essentially a pin buckle that secures the strap, is angular and chunky because it is designed to echo the shape of the case. The UN-172 movement is a new calibre, and like nearly all UN movements, done entirely in house. It is a new movement – according to UN development took 18 months – but it no doubt uses ideas and elements from UN’s diverse stable of calibres. And although the UN-172 is found in a relatively affordable tourbillon, it is technically impressive – but you have to look beyond the big “X”. Almost symmetrical, the movement is impressively airy – the open working and layout was smartly done. The going train is on the right of the barrel, and the keyless works just beside the crown, as is convention for movements with the barrel at 12 and tourbillon at six. Beyond the obvious and extensive open working that reveals most of its mechanics, the movement is automatic with a three-day power reserve. Because it’s wound via a gold micro-rotor that’s discretely positioned on the barrel at 12 o’clock, such that the self-winding mechanism isn’t immediately apparent. The centrepiece of the movement is the flying tourbillon, which continues the theme with an X-shaped cage. Its construction is especially useful in showing off the silicon parts of the tourbillon, with the escape wheel and hairspring being easily visible. Like most complicated watches at this price point, the decoration of the movement is mostly done by machine – with a some hand finished components – but it is neatly and attractively done in a style that suits the design.

One element that stands out is the use of different surfaces finishes to create depth in the movement. The various parts of the “X” on the dial, for instance, are grey and frosted or black and linearly brushed.

All of the bridges feature bevelled edges, albeit ones that have been cut by a CNC mill. The levers of the keyless works, on the other hand, have polished bevels that appear to have been done by hand. One bit of the movement that’s overdone is the text on the barrel and rotor. There’s just too much of it on the front as well as the back.

UN movements excel in both function and features – especially in their respective price segments – but have usually been matched with watch cases that are good, but not quite as great.

The case of the Blast is different without being over the top, making it an attractive design – and one that is also well finished. Admittedly the flying tourbillon movement is not especially interesting since tourbillons are too common, but the Blast is reasonably priced for what it is. In fact, it is arguably a strong value proposition, being a skeleton tourbillon with an upscale case for about US$45,000.

If the Blast is an indication of where UN is going – in short, cooler cases to go with its excellent proprietary movements – then the brand will surely have more compelling watches in the pipeline.