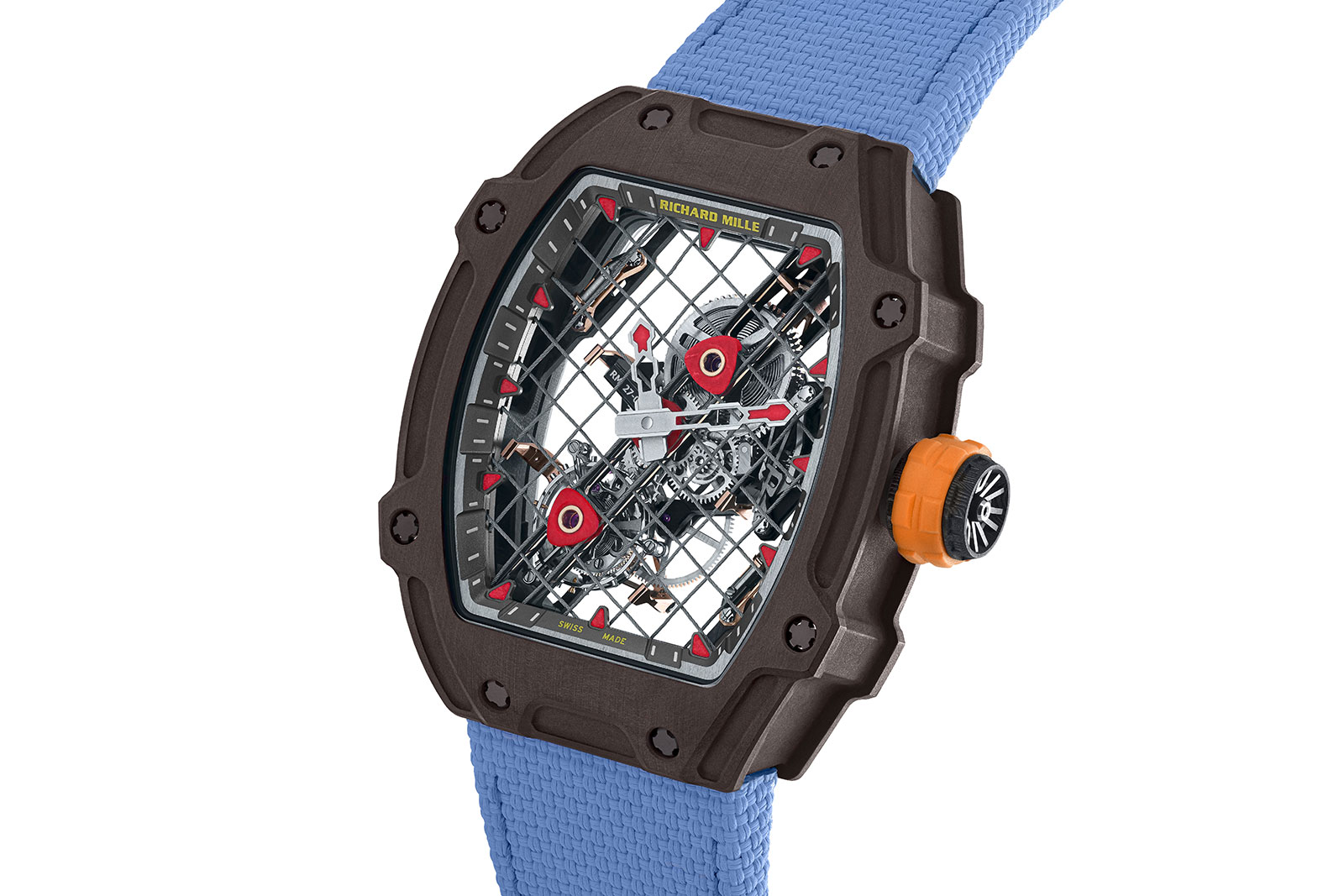 Conceived for the 10th anniversary of the partnership between Richard Mille and Spanish tennis champion Rafael Nadal, the RM 27-04 Tourbillon Rafael Nadal is an ultra-light, ultra-exotic, and ultra-expensive mechanical wristwatch.

Equipped with a hand-wind movement suspended on a dense network of steel cables within the case, the RM 27-04 has the greatest shock resistance of any Richard Mille wristwatch, or about 12,000 g. And its case is carbon composite, which combined with the skeletonised movement, means it weighs as much as a few sheets of paper. While the recent RM 72-01 chronograph went in a different direction than usual for Richard Mille – it’s equipped with a new, in-house movement with an unusual, double oscillating pinion construction – the RM 27-04 is very much in keeping with the brand’s spirit. 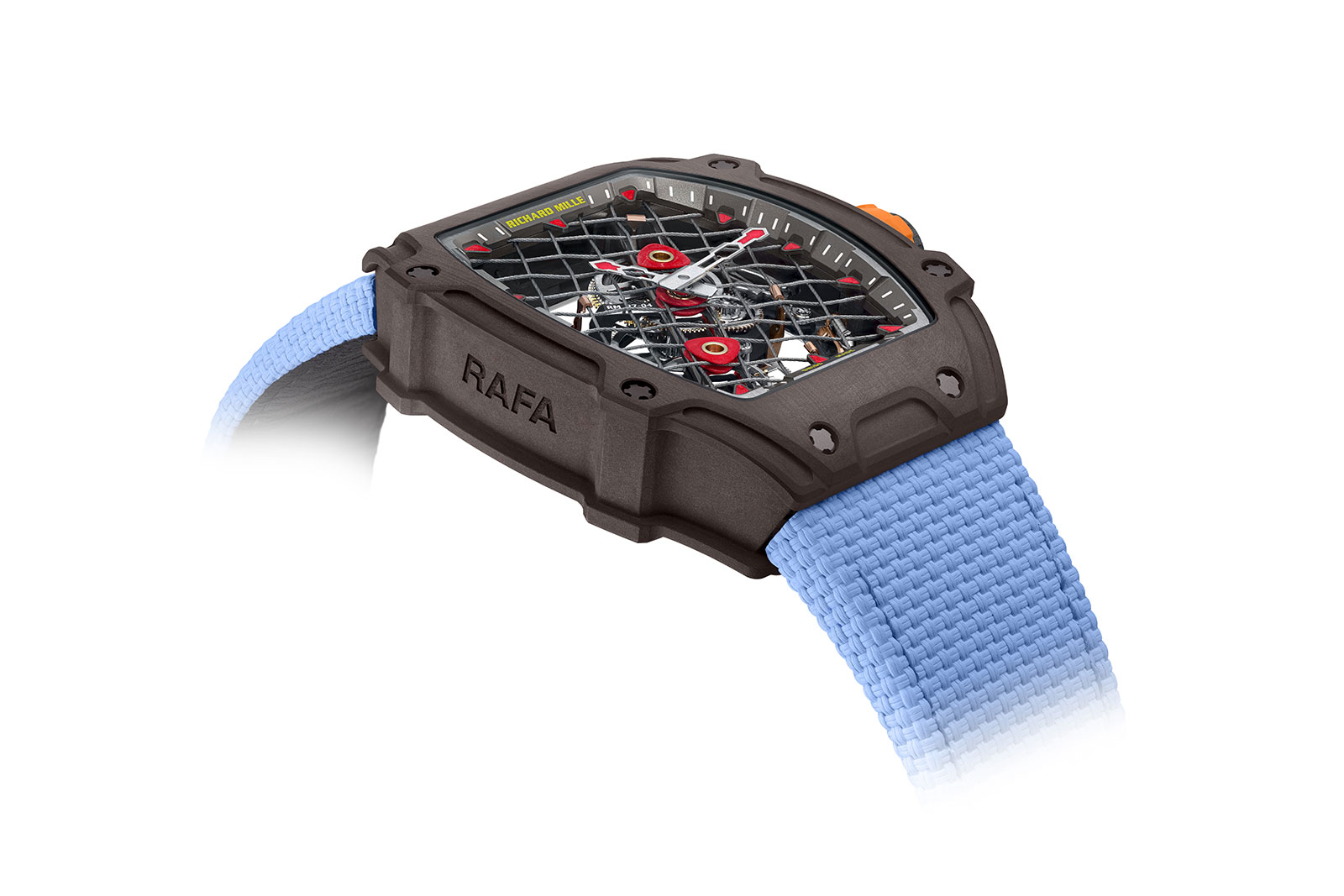 The RM 27-04 is a more extreme version of what Richard Mille has done before, with more cables, more skeletonisation, and more advanced composites. And it is also US$1 million, give or take. Judged by what the brand does, the RM 27-04 is a successful product in concept and execution.

But more broadly speaking, Richard Mille has been all about such watches for several years now, so the RM 27-04 doesn’t feel that exciting or interesting.

Weighing just 30 g including its strap – equivalent to about six sheets of A4 paper – the RM 27-04 takes the cable-suspension movement idea first used in the RM 27-01 – and then goes much, much further. 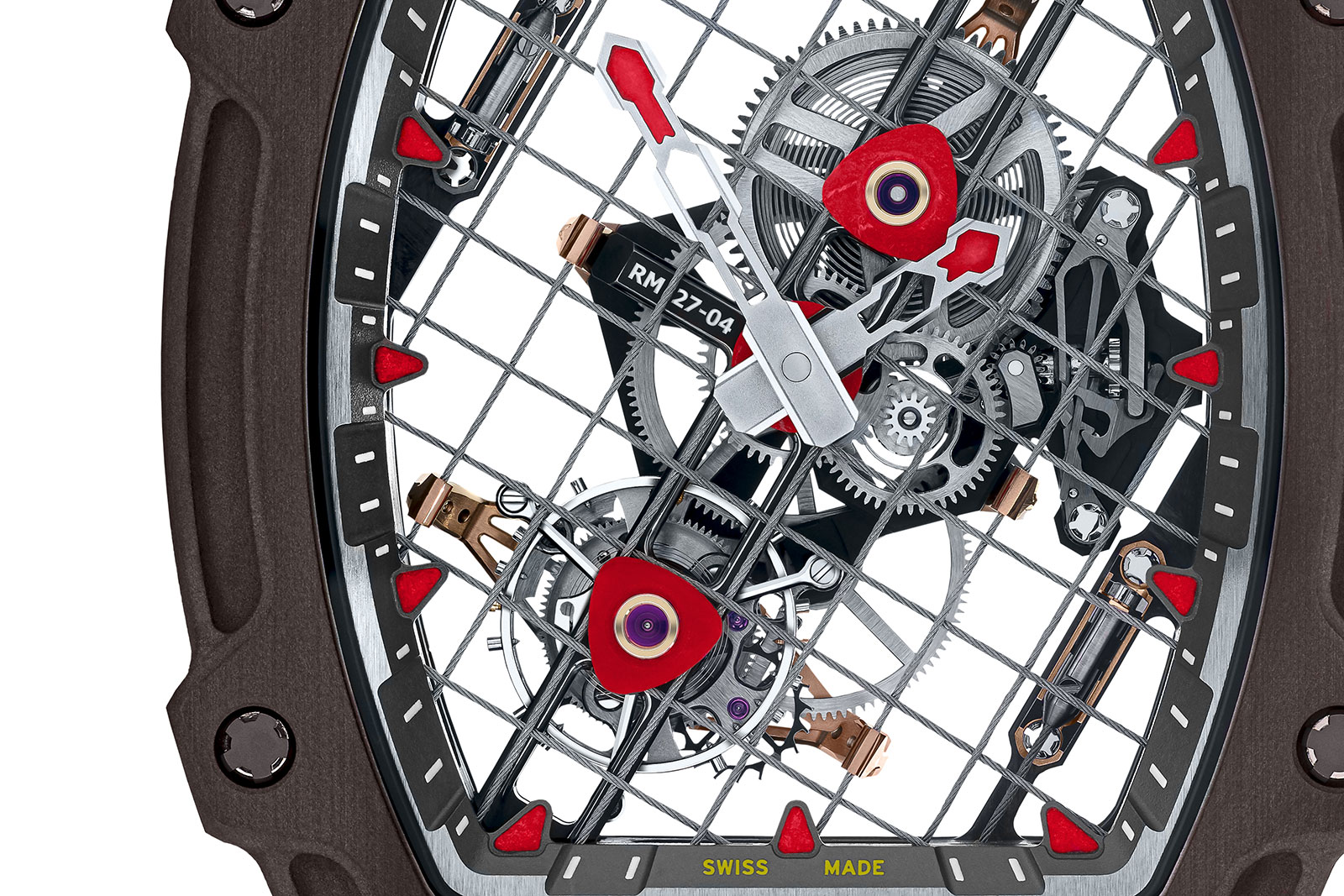 Like a tennis racquet, the RM 27-04 movement is anchored by a grid of interwoven braided steel wire just 0.27 mm in diameter. The wire is first anchored at via a rose-gold turnbuckle at five o’clock, then crisscrosses the movement, looping in and out of the bezel 38 times, and is finally secured with another gold turnbuckle located at 10 o’clock – all done by a watchmaker.

The movement, in turn, is secured to the wire mesh with five titanium hooks, which are screwed to the underside of the base plate. The five titanium hooks coated in gold, along with the turnbuckles on the edge of the movement

According to Richard Mille, the wire-suspension construction gives the movement an exceptional shock resistance of over 12,000 g. In comparison, the navigation circuitry inside the artillery shell for a 155 mm howitzer is built to withstand 15,500 g (according to defence contract L3 via Wikipedia). 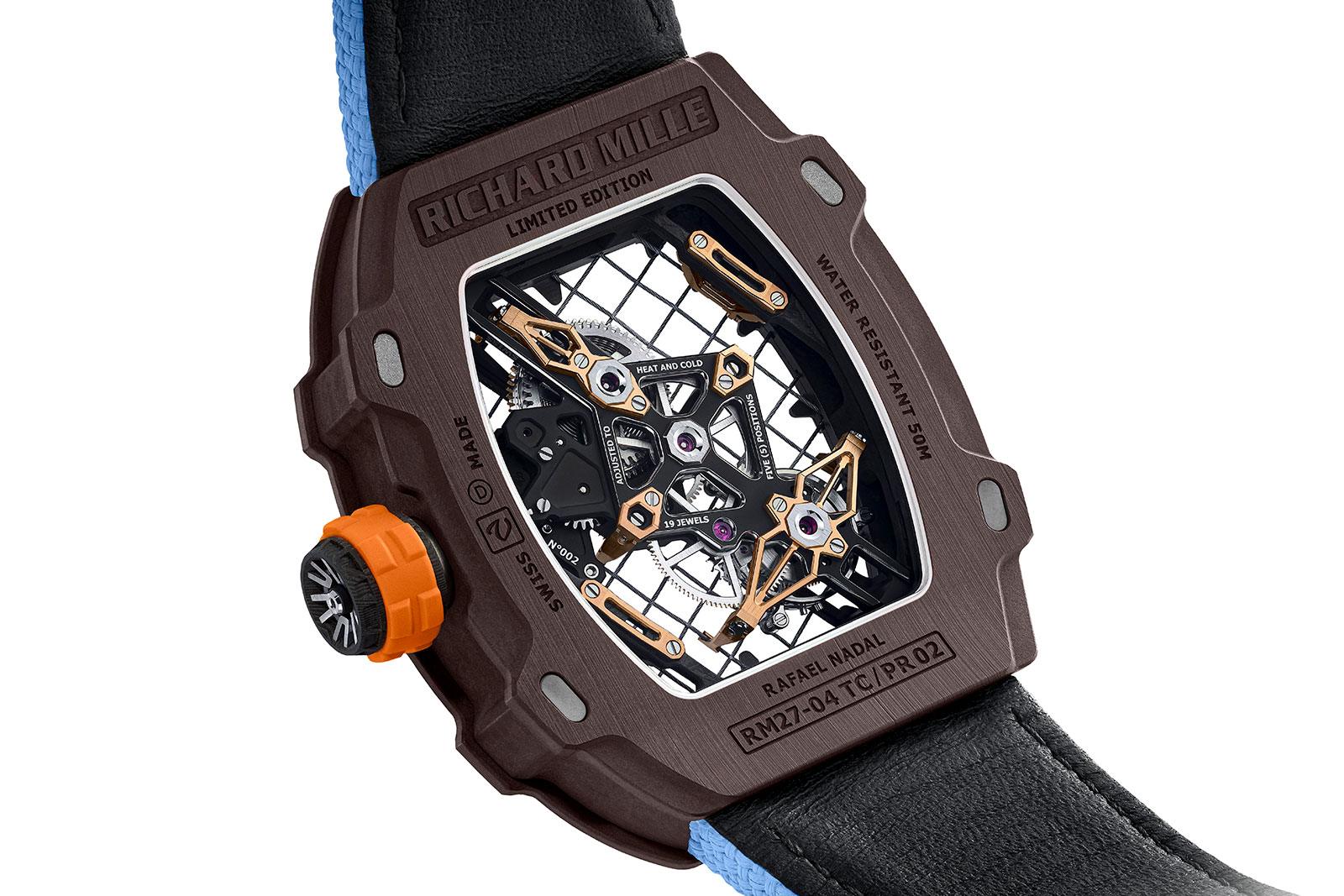 And in traditional Richard Mille style, the case is a carbon composite – carbon fibres suspended in a polymer. This time it’s a new composite named TitaCarb, which is distinguished by a relatively high carbon fibre content of 38.5% of its volume. The case is a single piece, with both crystals attaching directly to the case after the movement has been installed. 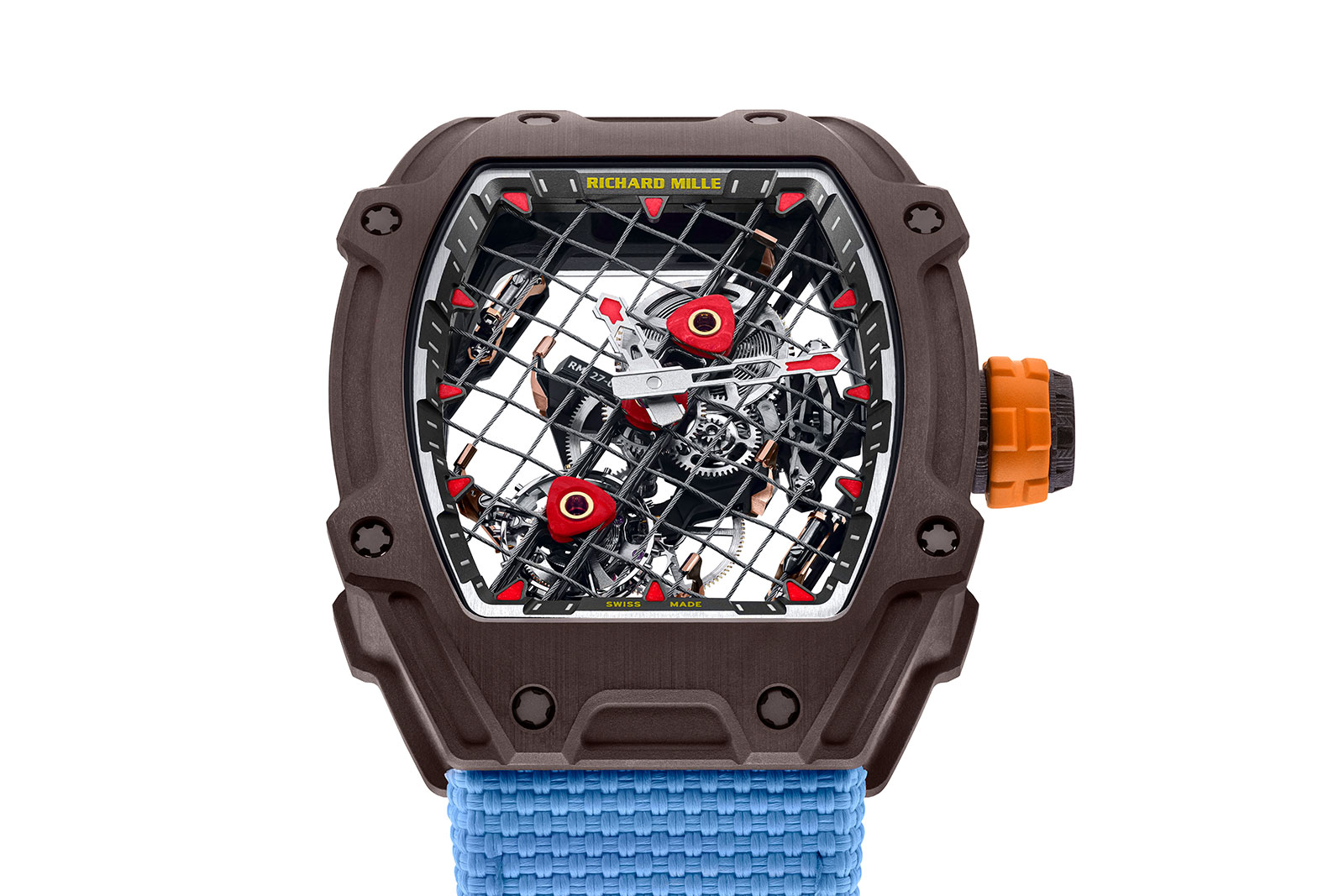 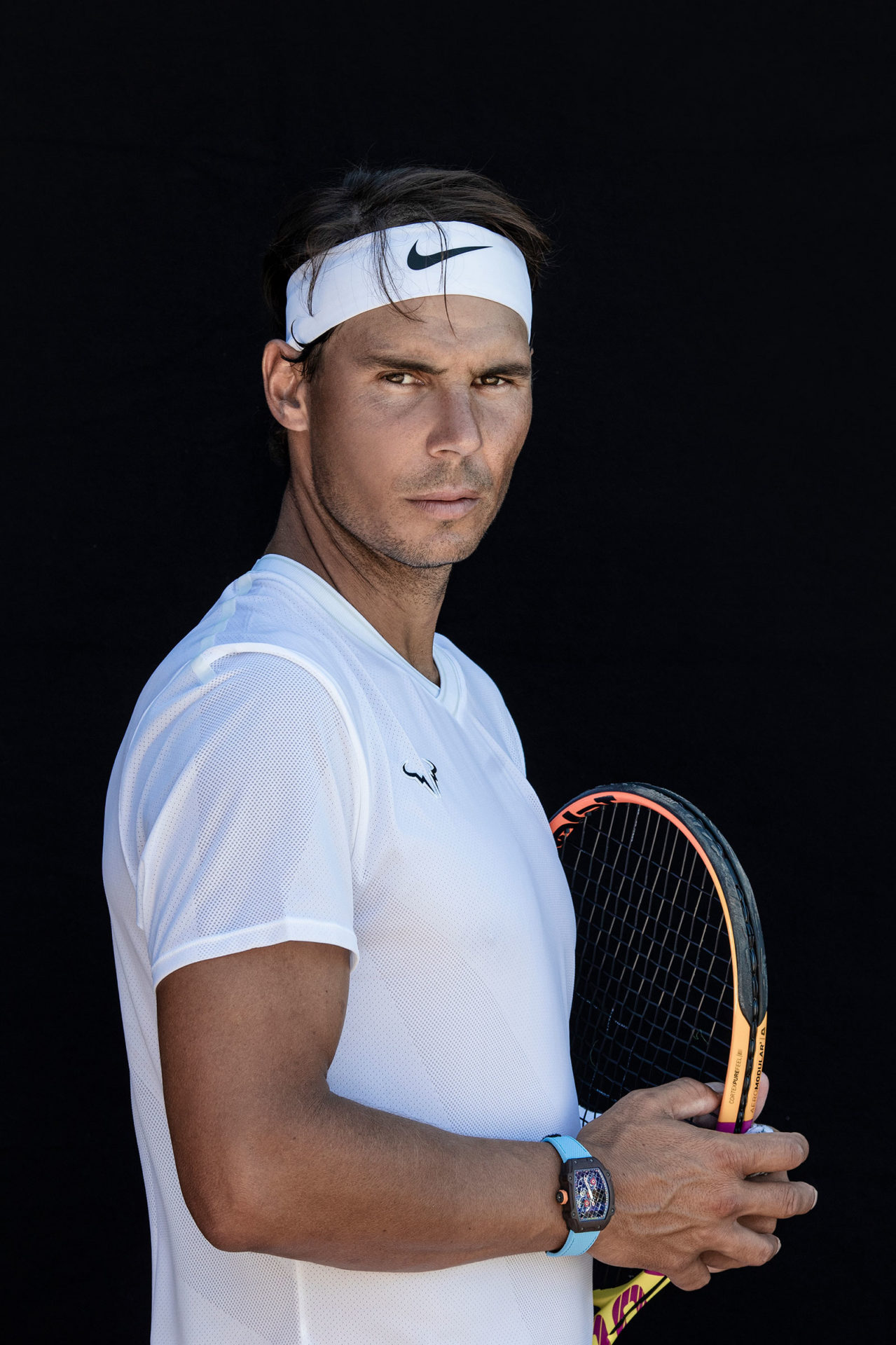 Originally a watchmaker, Piaget made its first foray in jewellery in the mid-20th century (which was also the period it debuted its ultra-thin movement, a feat Piaget has since surpassed by a large margin).

One of its signature jewellery timepieces is the Limelight Gala, a quirky but elegant watch available only with a quartz movement, till now. Piaget has finally unveiled a mechanical version that preserves the same asymmetric style, the Limelight Gala Automatic. 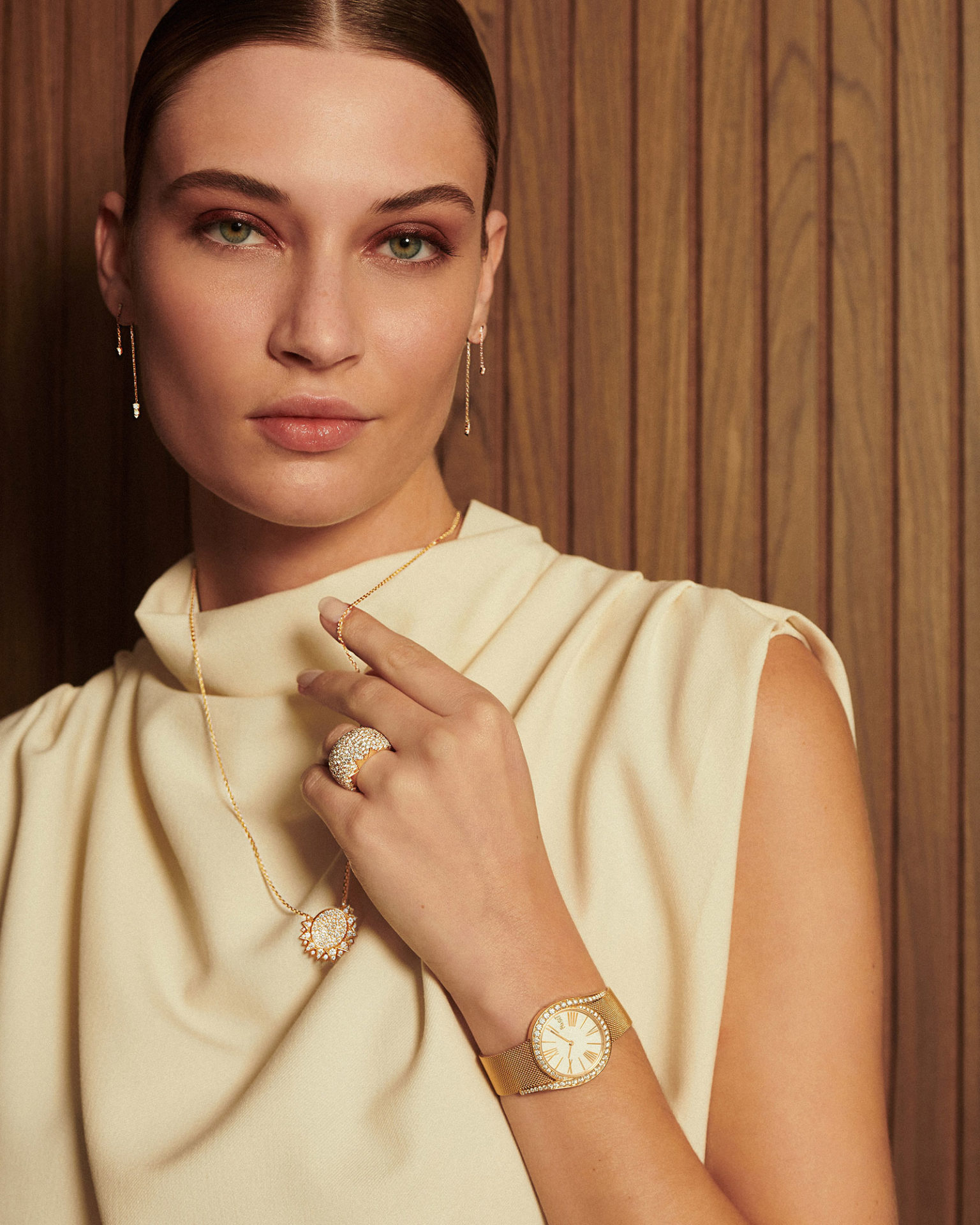 While evening watches are often conveniently conceived as pick-up-and-go quartz accessories, a mechanical alternative is an intuitive addition to the line given the growing appreciation for old-school watches. 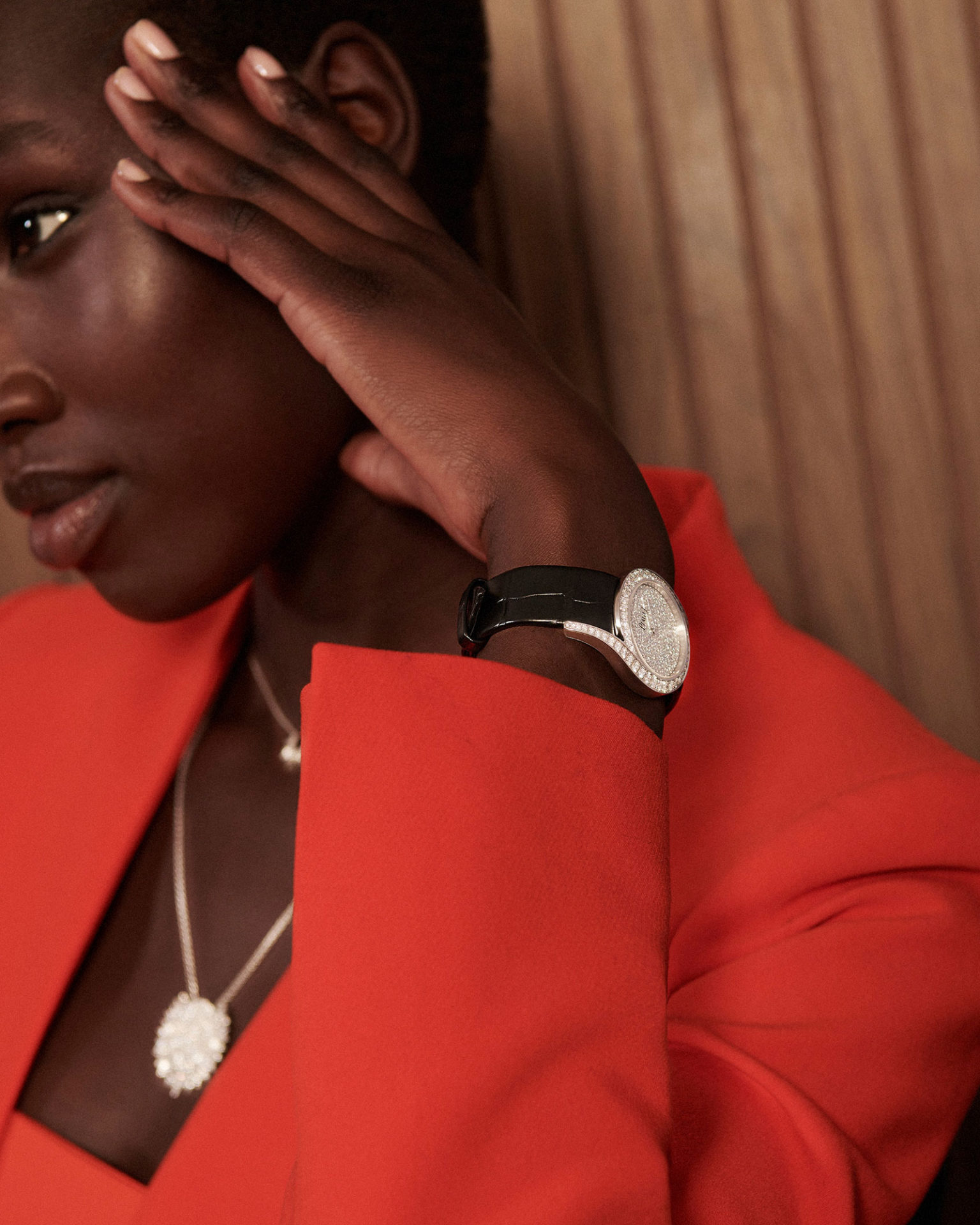 Even though the cal. 501P inside the new Limelight Gala is a razor-thin movement of the likes found in the Altiplano automatic, it is small enough for a 32 mm case, larger than the traditionally-tiny norm for evening wear but still agreeable. The larger size, as well as the fact that the cal. 501P is a workhorse movement, making the new Limelight suitable as a daily-wear watch.

That said, the cal. 501P is a workhorse – it’s also found in the entry-level and sporty Polo S – which means it doesn’t seem upscale enough for the higher-end versions of the Limelight, which costs a little over US$50,000. The new Limelight Gala is priced steeply, starting at from US$35,000 for the base model with a diamond-set bezel. The new mechanical Limelight Gala is largely similar to its quartz counterpart, characterised by asymmetrical lugs. All five watches feature the same diamond-set bezel and lugs, with the differences in the dial and strap.

The simplest variants are equipped with a clean, silver dial finished with a grained texture. Though simple, the dials are well detailed with applied indices that give it some visual depth. They are available in white gold and rose gold, with either a leather strap or a gold mesh bracelet. The highlight is definitely the diamond-paved variant, set with varying sizes of diamonds, creating a texture slightly reminiscent of clouds. The diamonds on case, dial, and buckle total 3.5 carats The Limelight Gala case features lugs that seemingly flow into the case from top and bottom. A thoughtful design feature is the hidden crown that sits in a recess underneath the bezel, creating a seamless case outline. And through the sapphire crystal back the attractive but largely mechanically decorated cal. 501P is visible.