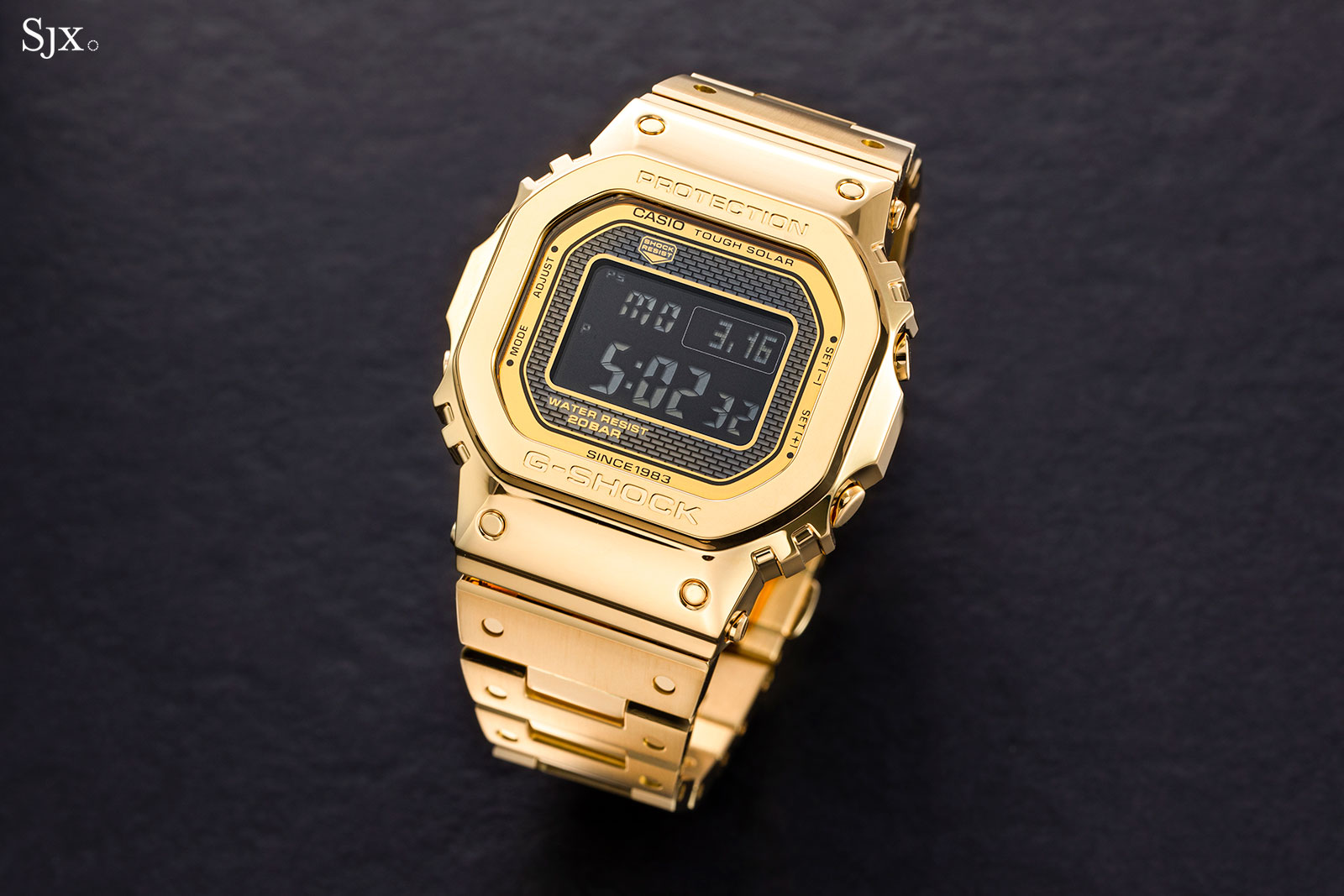 Casio has been on a roll with the G-Shock Full Metal, which is essentially the original G-Shock DW-5000 of 1983 but reproduced in steel or titanium with a matching metal bracelet. Originally launched in gold-plated steel, the Full Metal has since been iterated endlessly – from titanium to “grid” to steel to aged gunmetal – making the concept a little less interesting because there are now so many variants.

And then there is the G-Shock Dream Project “Pure Gold”, the most expensive G-Shock ever made, executed entirely in 18k gold, from screws to clasp. A watch that took over a decade to materialise, the idea for a solid-gold G-Shock originated in 2007 with the founder of Japanese watch retailer Eye Eye Isuzu, Yasuyuki Iima, who wanted “a symbolic product for the iconic digital wristwatch born in Japan”.

Mr Iima’s suggestion was the genesis of the “Dream Project” of G-Shock inventor Kikuo Ibe. And when the solid-gold G-Shock was finally delivered in late 2019, Mr Iima received the very first example.

One example of the Dream Project was delivered to Singapore – you’ll find the arrival and unboxing here – and I got to examine it up close. 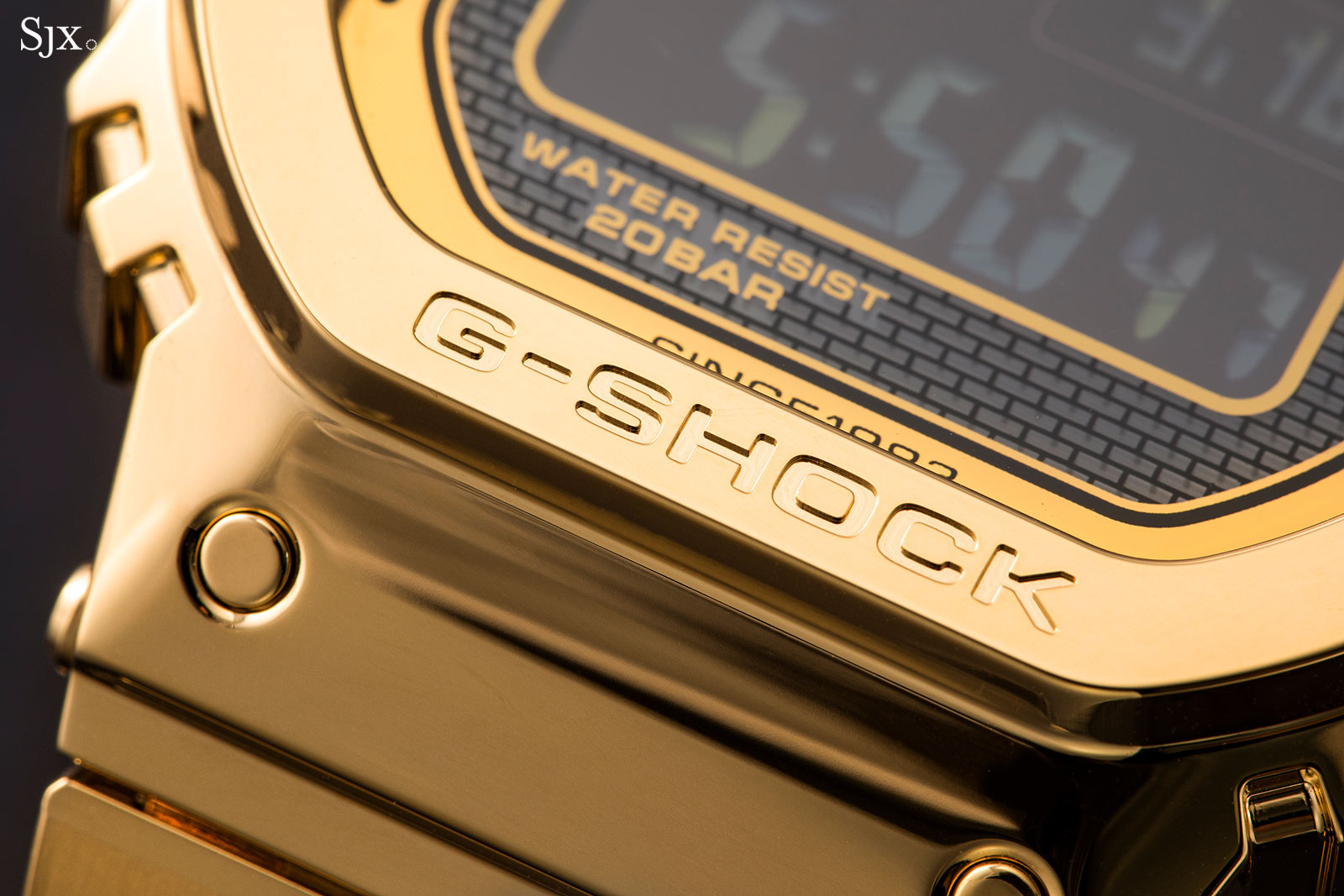 The Dream Project is a magnificent and preposterous watch that costs US$70,000 – an iconic watch executed in a ridiculously over-the-top manner, akin to installing the W16 engine from the Bugatti Chiron in a Volkswagen Beetle. And that makes it cool.

Dense, shiny, and very gold, the Dream Project makes no sense at all, yet it is fundamentally compelling, both tangibly and conceptually. The watch is reassuringly heavy in the hand, and wonderfully shiny. And it also evokes a warm nostalgia; for someone who grew up in the 1990s, the G-Shock was arguably a defining watch of the era. 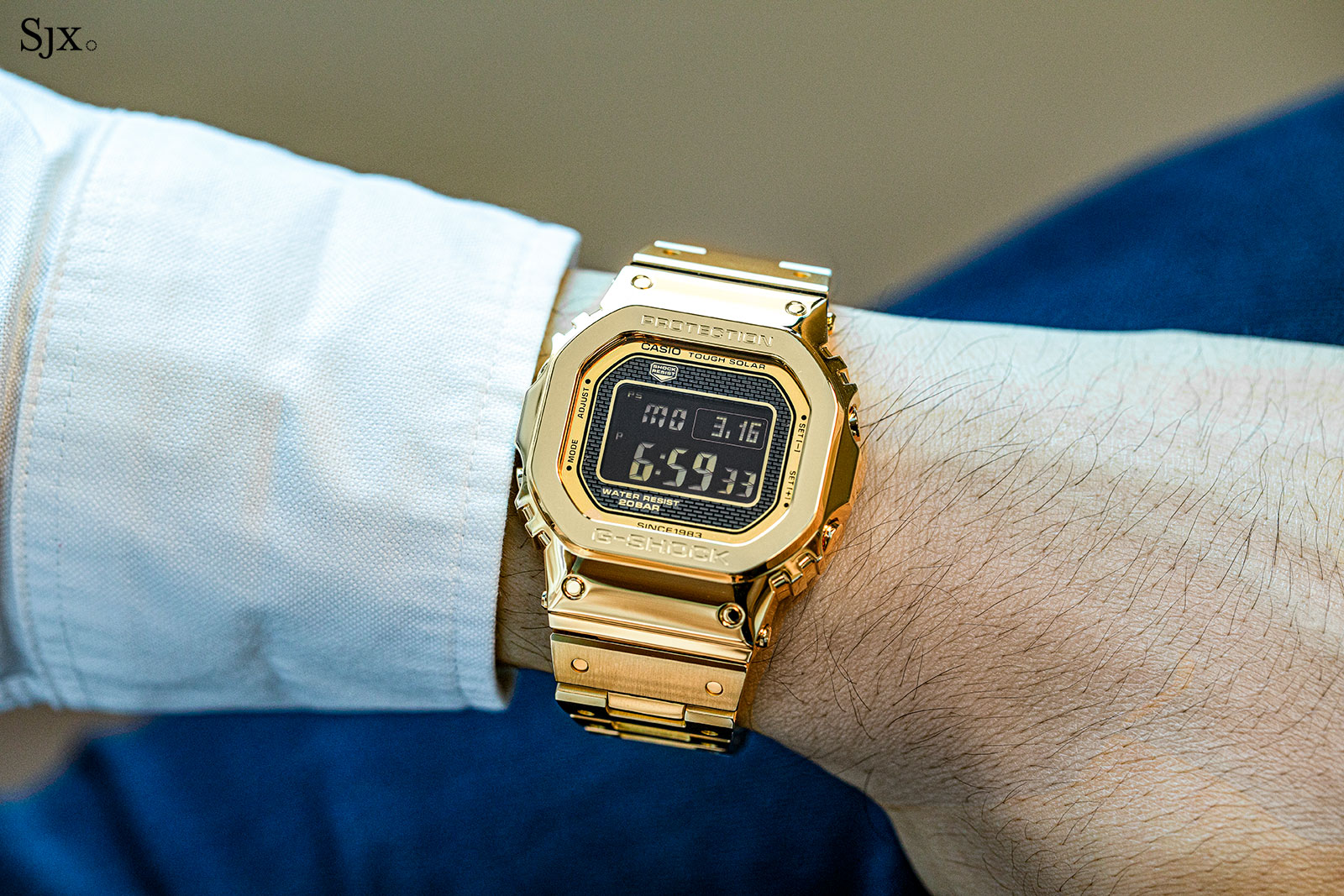 Is it worth US$70,000? Absolutely not in any rational sense, but for the watch collector who has everything, the Dream Project might have a greater allure than a Richard Mille or Audemars Piguet. Only 35 were made – all were sold in a flash – so it doesn’t really matter what anyone thinks of it, but here it is in all its glory. 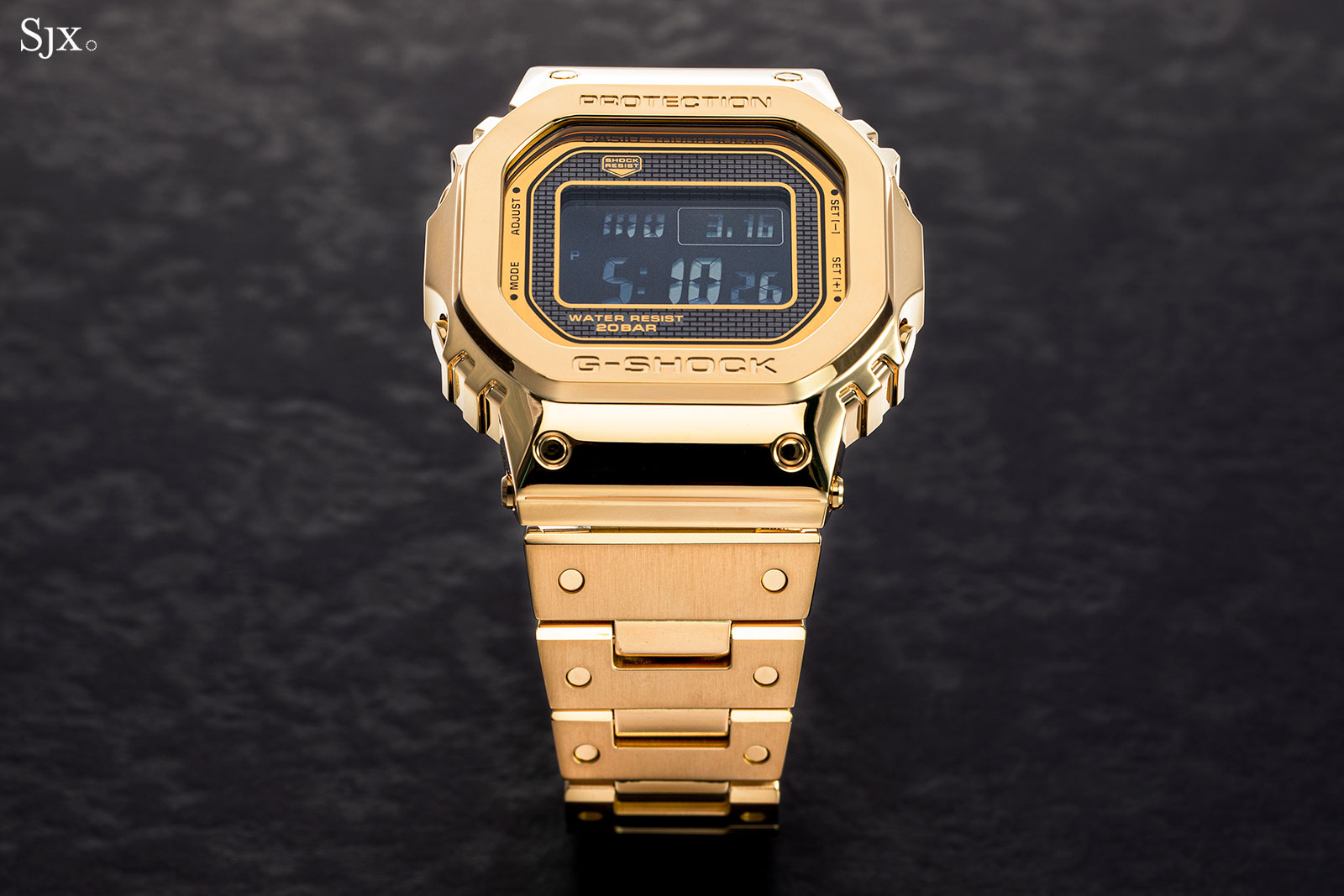 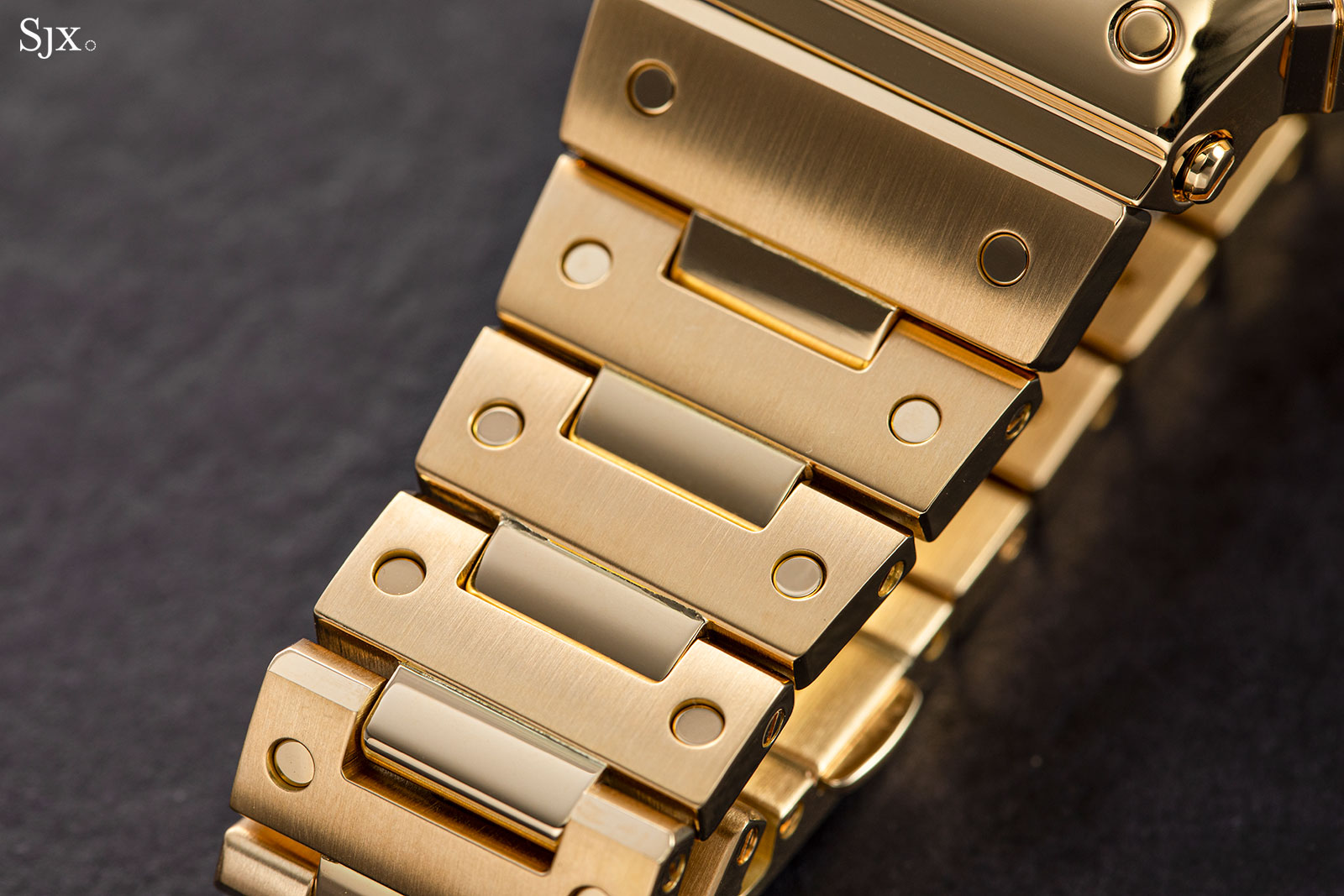 The Dream Project is delivered in a very Japanese package: a large box made of paulownia wood, the traditional gift box material in Japan, containing a cast-iron teapot with the handle lid shaped like the watch, along wood coaster modelled on the case back. Functionally the Dream Project is identical to a basic G-Shock, so it is a solar-powered, digital multifunction with functions like alarm and chronograph, though it lacks fancier features like Bluetooth connectivity. The “inverted”, white-on-black LCD face is almost identical, though it is slightly cleaner, with less text all around the dial.

Importantly, the Dream Project has the same shock resistance as a plastic G-Shock. That means if chucked out the window, the watch will remaining entirely functional – but the gorgeous gold components will no doubt be severely marred. Where the Dream Project impresses is its physical characteristics – heft, density, and sheer gold-ness. The watch is identical in size to the standard model, which means a diameter of a little under 44 mm, or large but not overly so. But in solid 18k yellow gold it looks and feels like a lot of gold, which is very much a good thing.

The Dream Project weighs 297 g, or about 10 oz, about the same as a Rolex Daytona in platinum. Like the Daytona, it feels dense, because it is heavy but not extremely big. The reason for the weight is the double-case construction that’s the defining feature of the G-Shock case. Originally conceived to maximise shock resistance, the G-Shock case is made up of an inner and outer case separated by a rubber insert that acts as a shock absorber.

In the Dream Project, the inner and outer cases are both 18k gold, as is the screw-down case back, as well as all of the solid bracelet links – a generous serving of yellow gold. As it did with the steel or titanium Full Metal models, Casio replicated the look and details of the plastic G-Shock in 18k yellow gold, from the wide, flat bezel to the “vents” on the side of the case. But everything is in 18k gold, and consequently constructed differently from the plastic or steel models. 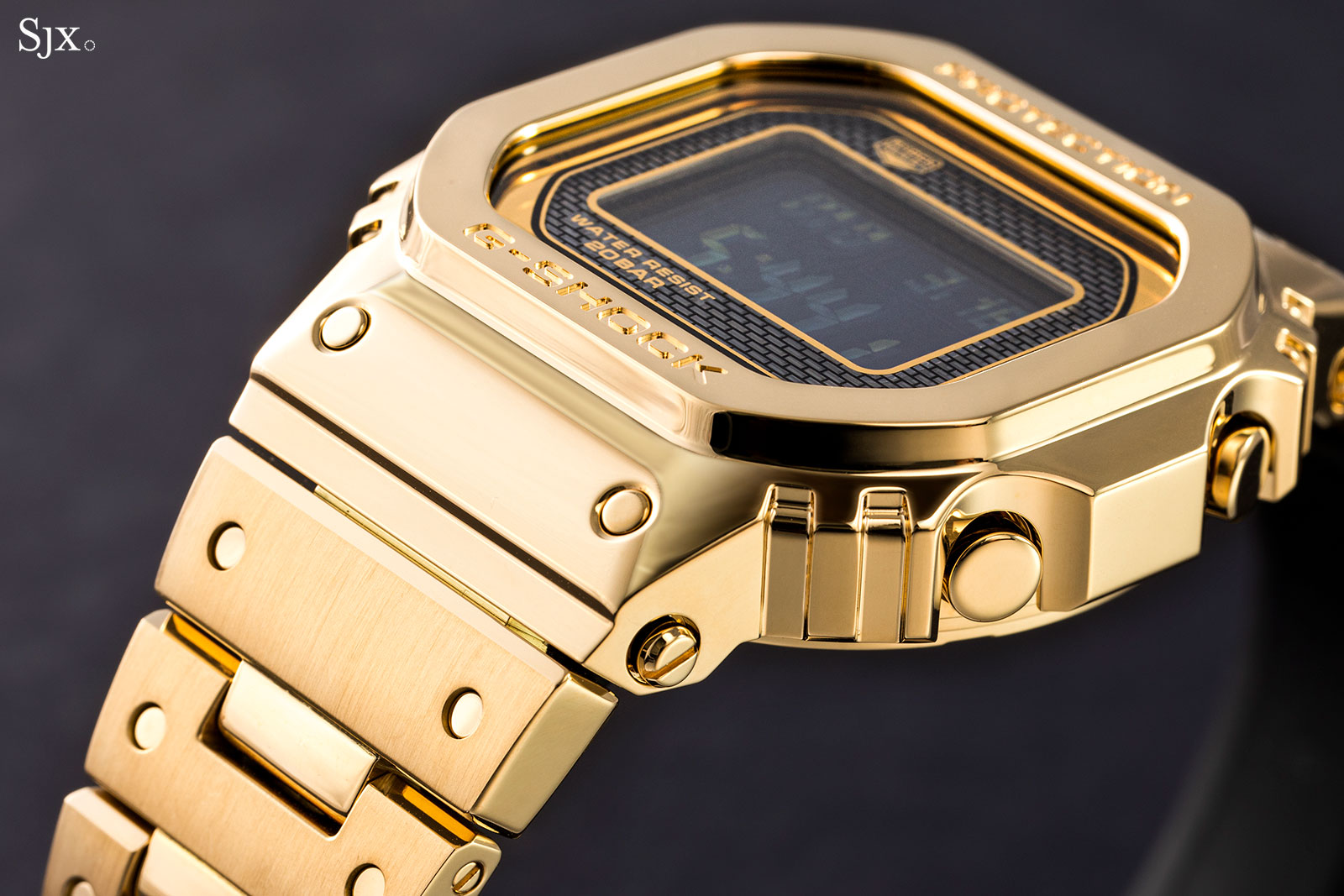 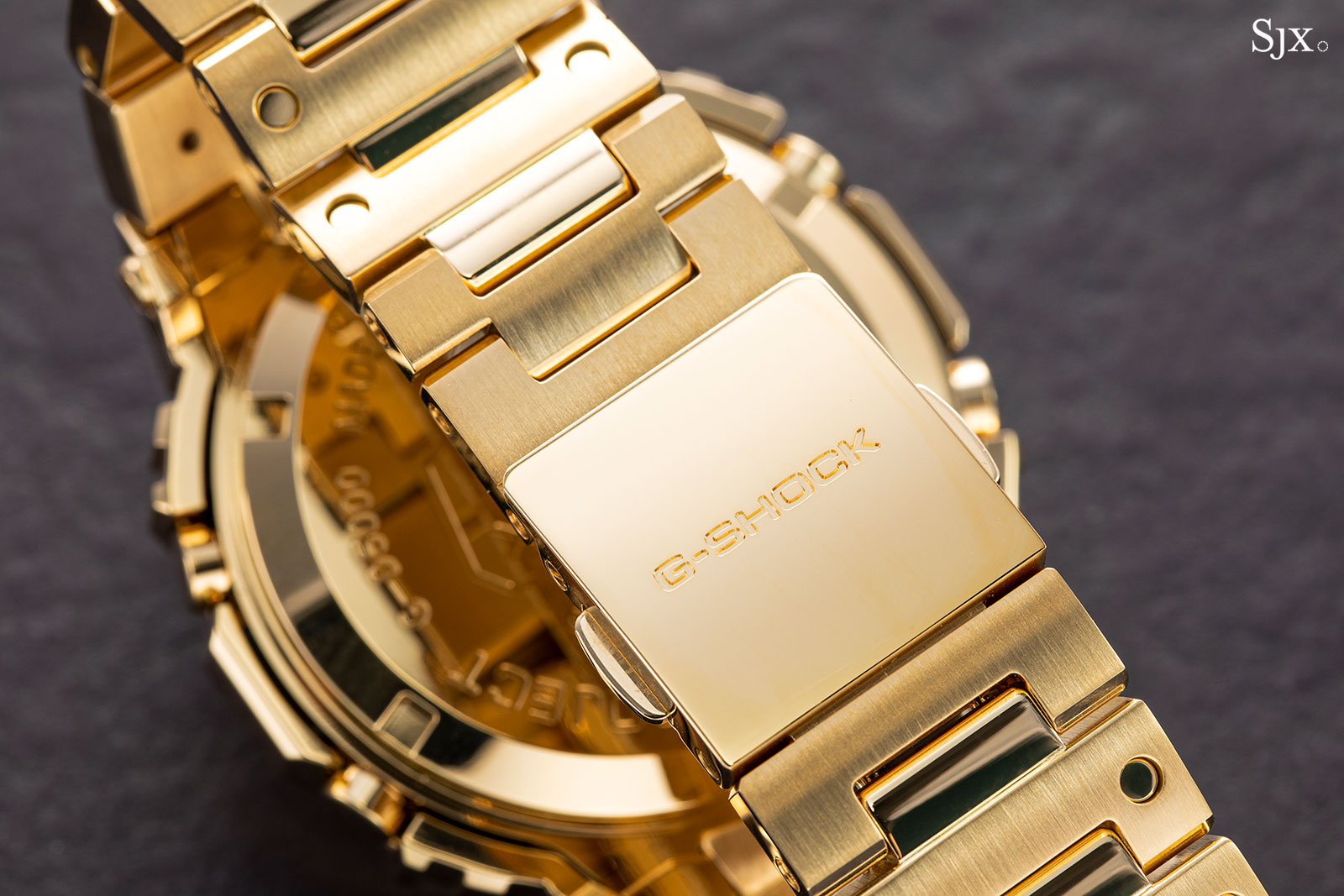 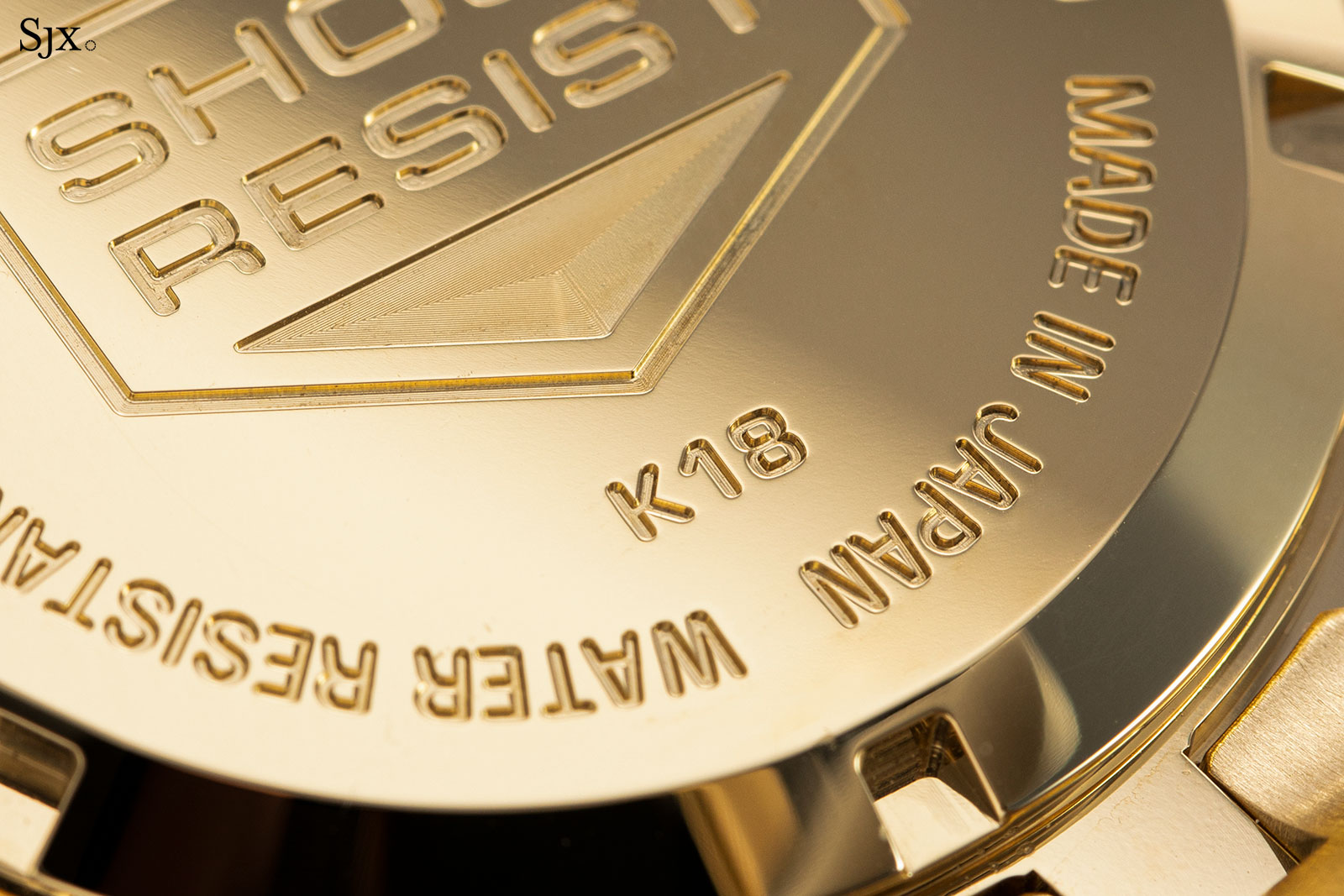 Even the dimples on the strap are reproduced, but in a far more elaborate manner. On the plastic version the dimples are moulded, while on the Full Metal they are cast or forged along with the links. On the Dream Project, the dimples are actually a screw-and-nut set up: the dimple on the front is the top of a nut that is secured by a small screw on the back of the link. 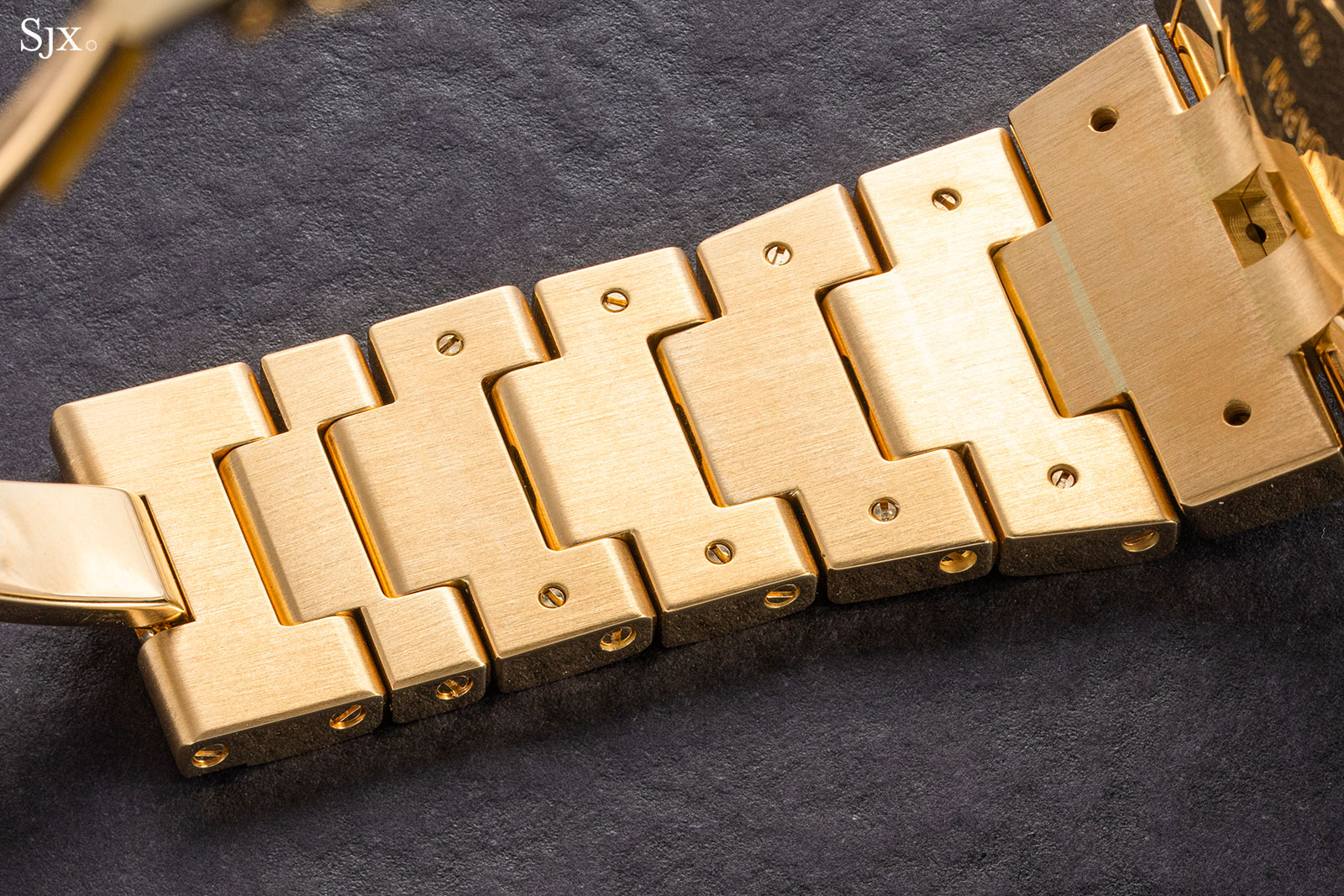 In fact, at the time of the launch, Casio stated the Dream Project was made on a special production line set up just for 35-piece run. The differences in production techniques are obvious upon examination.

One of the most obvious is the engraving on the back. While standard models have lightly-etched, laser-engraved markings, the Dream Project has deeply-engraved markings executed via CNC milling. Under magnification the markings reveal the marks left behind by the drill bit as the cuts away the material. 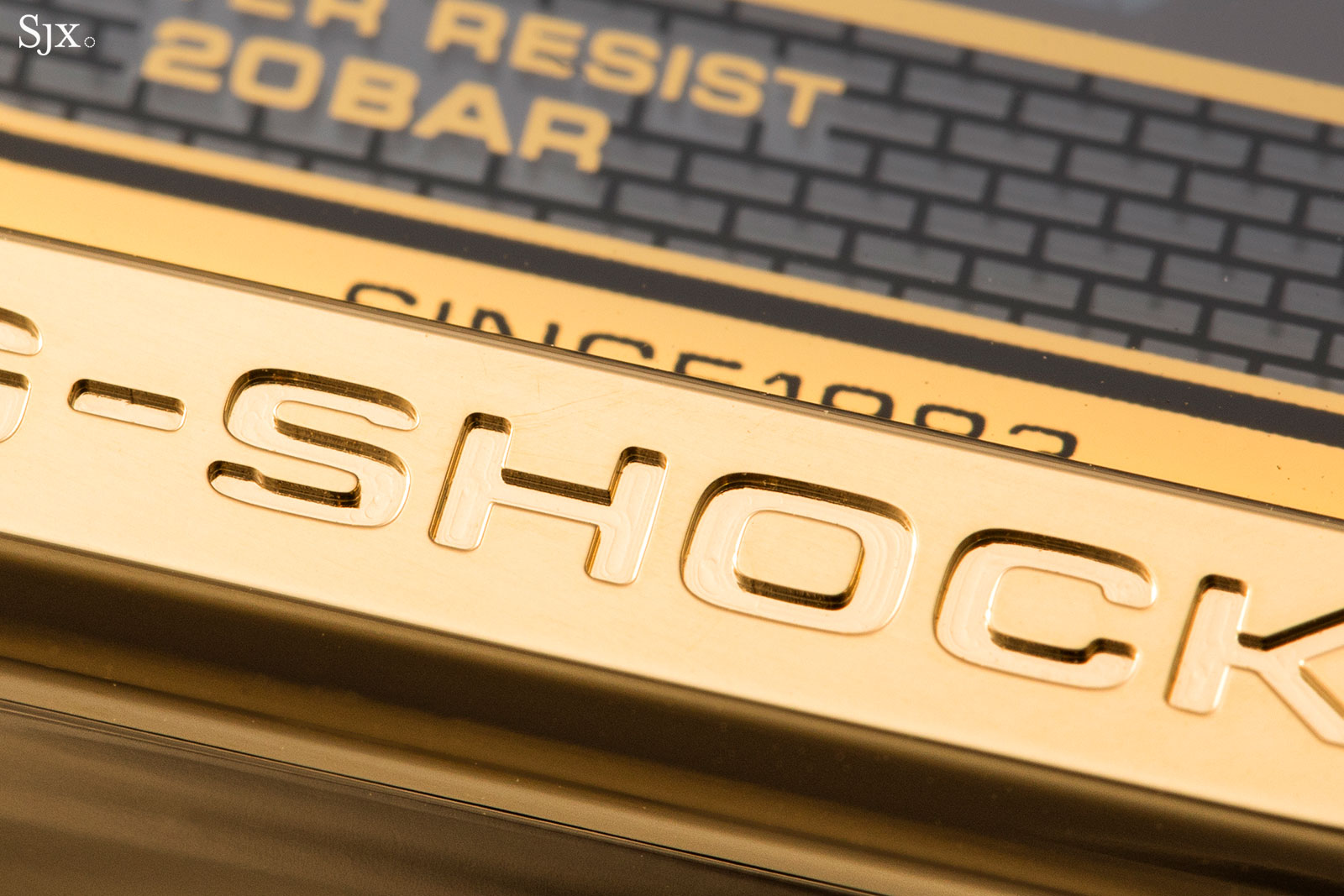 The engraving on the bezel is similarly milled, leaving telltale machining marks

The finishing of the case and bracelet is superior to standard G-Shock watches, but still far from the quality found on similarly priced mechanical watches, perhaps reflecting the fact that this is the first time Casio has made a solid-gold watch. All of the components feel neat and industrial, rather than refined, which is fitting for the uber G-Shock.

The case is largely mirror polished, while the bracelet is partially brushed. All of the surfaces are finished well but simply, and faint machining marks can still be seen on some parts, like the lower edge of the case middle where it meets the back. 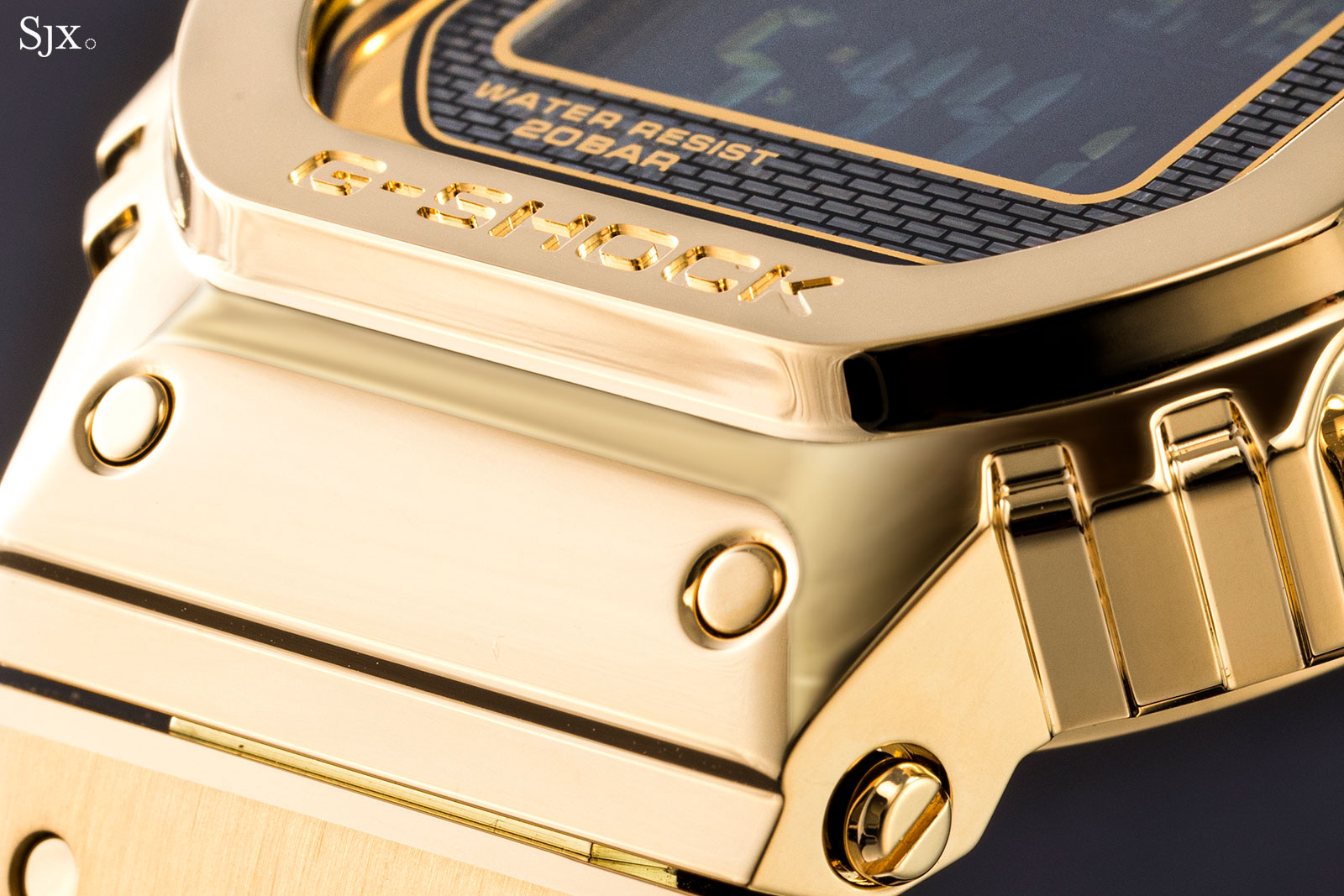 The machining marks are visible just below the button But the watch is awesome because it is preposterously elaborate perspective on 1990s nostalgia. It takes a certain kind of crazy to buy a G-Shock for that much money, but it is very much a good kind of crazy. Correction August 11, 2020: The Bugatti Chiron has a W16 engine, and not W12 as stated in an earlier version of the article.