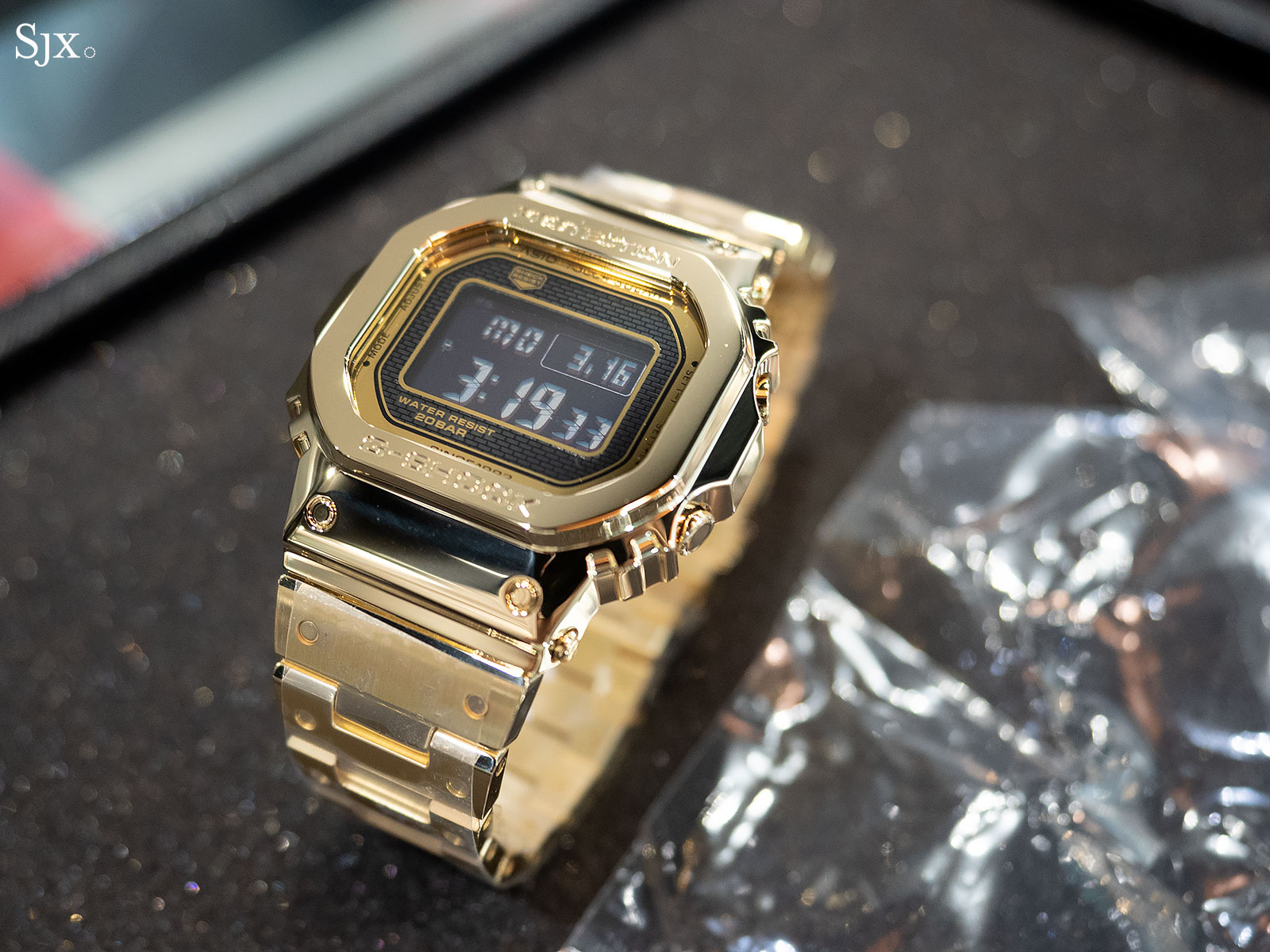 Preposterous, outrageous, and very, very cool, the G-Shock Dream Project ‘Pure Gold’ G-D5000-9JR was announced last year. The watch cost US$70,000 – about the same as a Patek Philippe ref. 5172G chronograph or a Voutilainen Vingt-8 in steel – which was a shocker. But with only 35 made, the Dream Project sold out faster than you can say DW-5000.

Though the watches were allocated to clients via ballot in May 2019, the first watch was only delivered in January 2020, with the rest of the watches trickling out at a gradual pace until late 2021 when the final watch will be completed.

The very first watches were delivered to retailers in Japan, but one recently arrived in Singapore, the only one sold in the city state. Most countries only got one, with very large markets like the United States getting two, and the rest going to Japan.

Made entirely of 18k yellow gold – it weighs 297 g or about 10 oz – the Dream Project was first exhibited at Baselworld 2015 as a concept watch. According to watch magazine Chronos Japan, the idea for a gold G-Shock came from Yasuyuki Iima, the president of Eye Eye Isuzu, a noted watch retailer. His suggestion led to G-Shock inventor Kikuo Ibe embarking on a “dream project” – the solid-gold G-Shock.

The watch took five years to make it to market primarily because of the challenge in making it as shockproof as a standard G-Shock – basically the watch’s functionality has to survive being thrown out a third-storey window. And naturally, the very first Dream Project was delivered to Mr Iima, the retailer who first mooted the “dream” a decade ago.

Having been constructed much like the G-Shock “Full Metal”, with inner and outer cases in solid 18k gold and a shock-absorbing rubber bumper in-between the two, the “Dream Project” passes the G-Shock test but nonetheless arrives in well-protected, elaborate packaging that is distinctively Japanese. 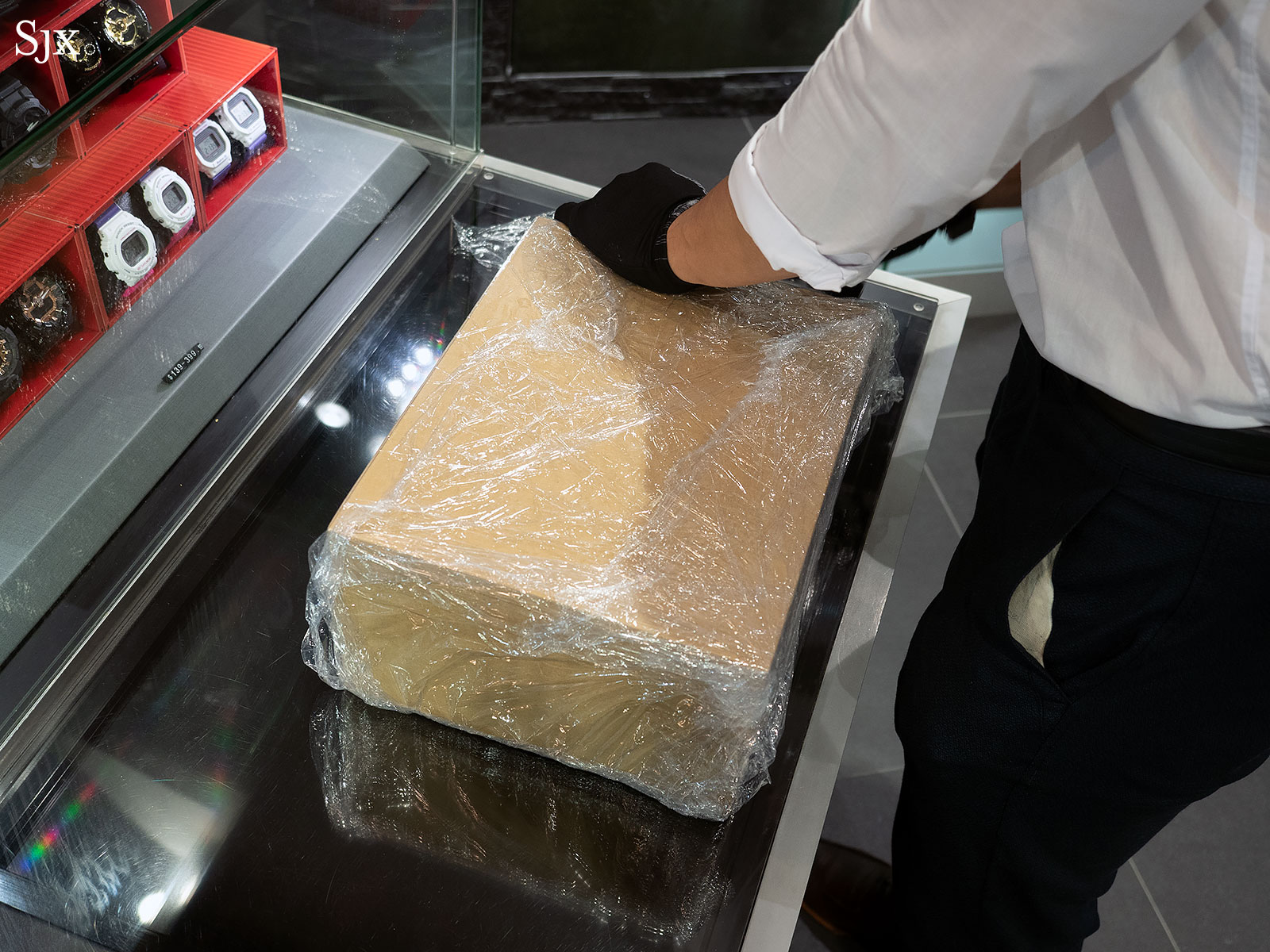 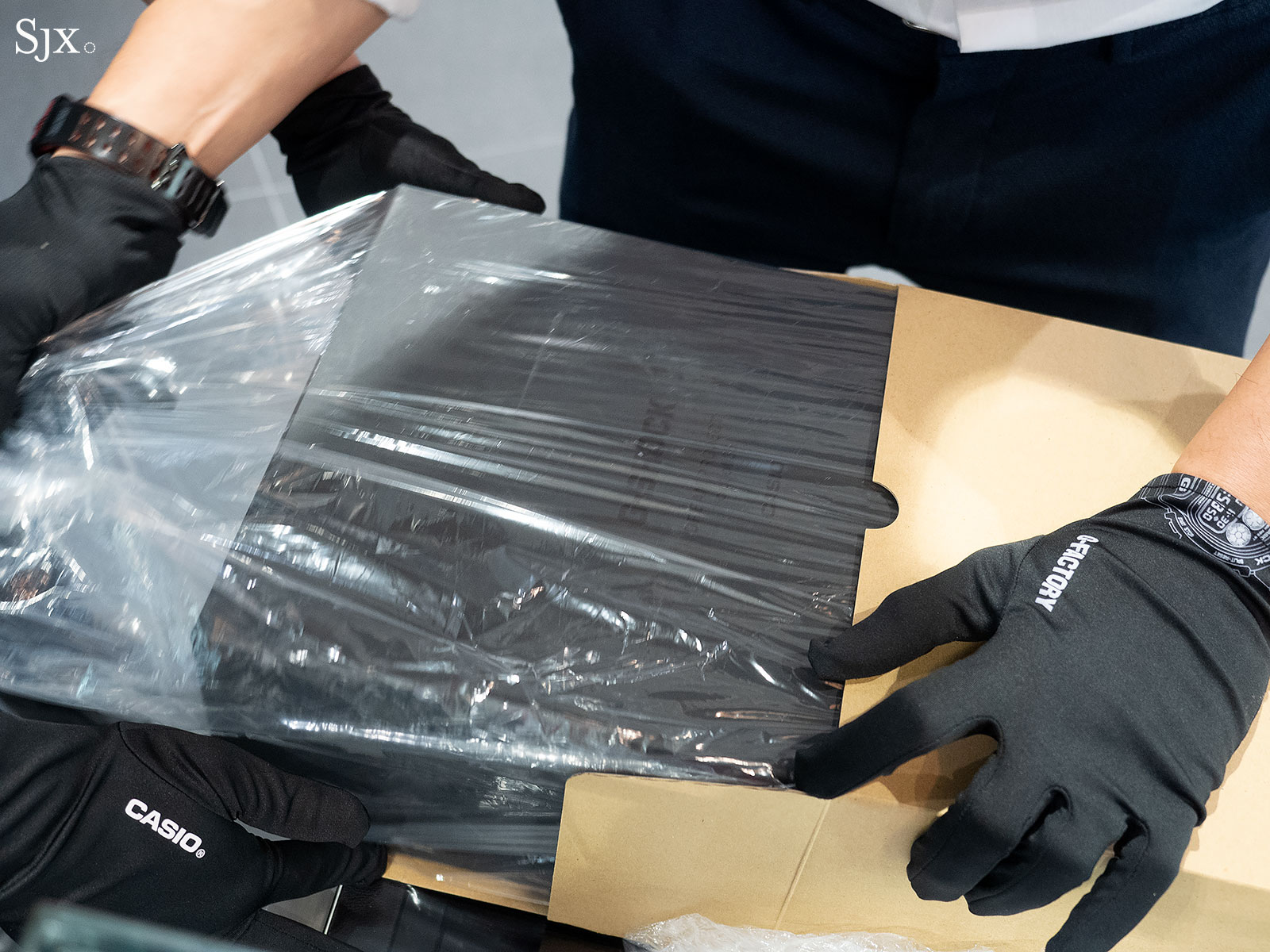 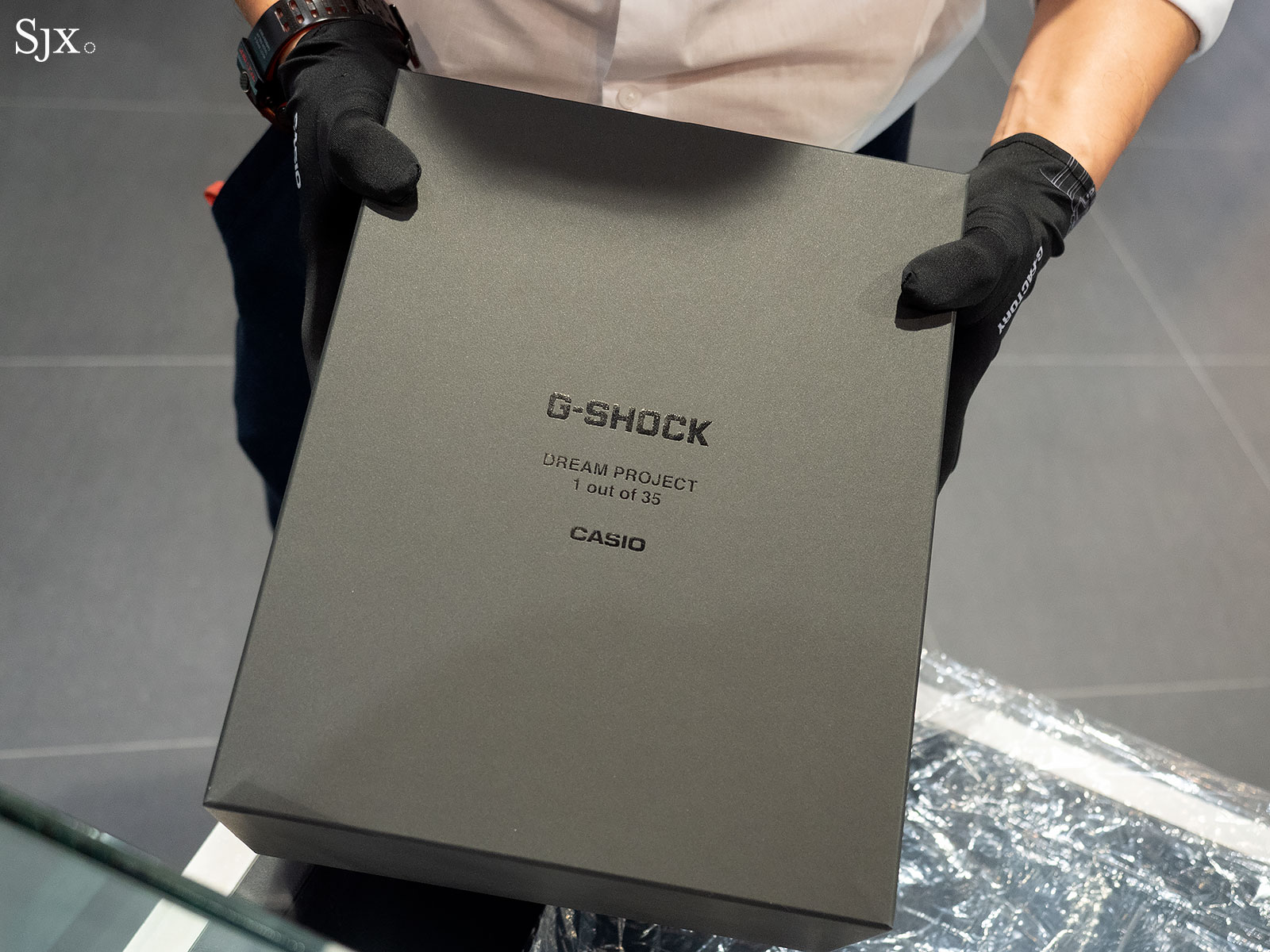 While the outer box is ordinary cardboard, the inner box is made of paulownia wood, the quintessential material for presentation boxes containing fine Japanese goods.

A light but surprising strong wood, paulownia wood is believed to protect items from moisture, mould, and other damage. Practically any high-end, traditional Japanese item is delivered in a paulownia wood box – a kiri-bako – from maki-e tea caddies to kimonos. 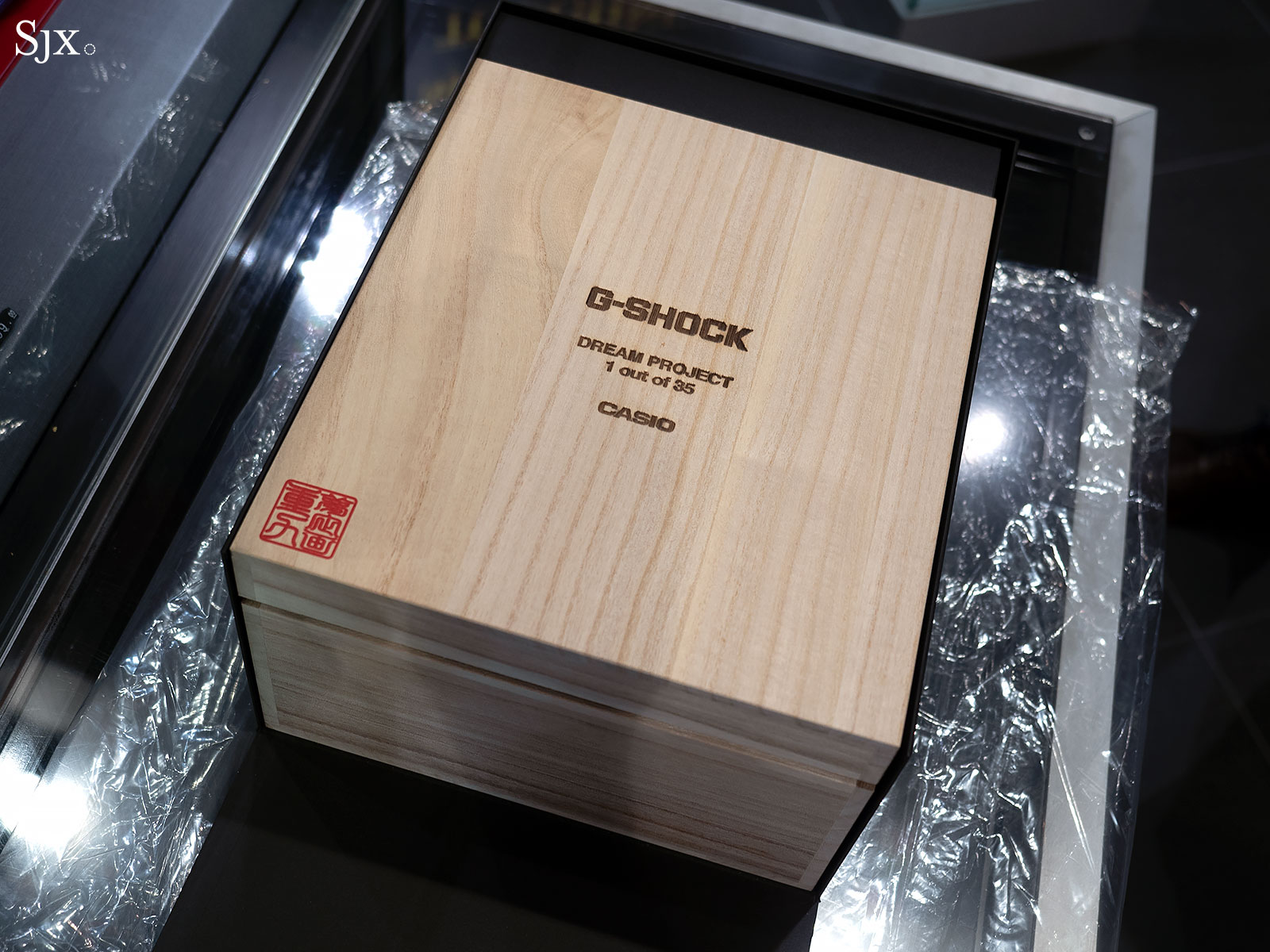 The seal, or ‘hanko’, on the lower left corner reads “Gravity Dream Project”

Within the kiri-bako sits another traditionally Japanese object produced by a typically Japanese family business: it’s a piece of Nambu tekki, or Nambu cast ironware. Specifically, it’s a kettle, or tetsubin, produced by Oigen, an iron foundry in Oshu that’s been in business since 1852 and is now run by the fifth generation of the founding family.

The kettle has been custom made for the Dream Project, with the handle on the lid cast in the shape of the watch, which also makes it appearance on the underside of the lid. 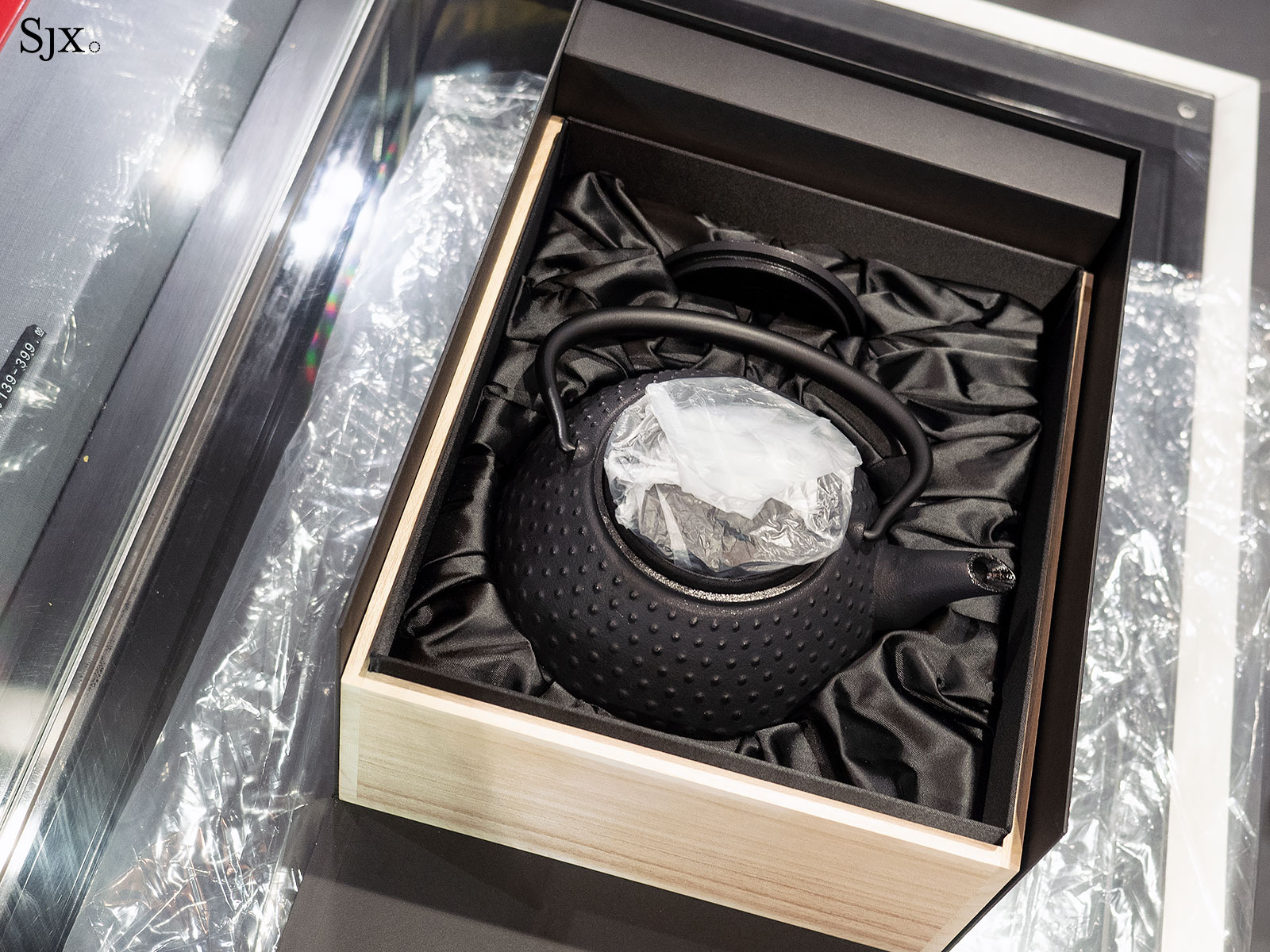 The kettle filled with something that’s definitely not tea 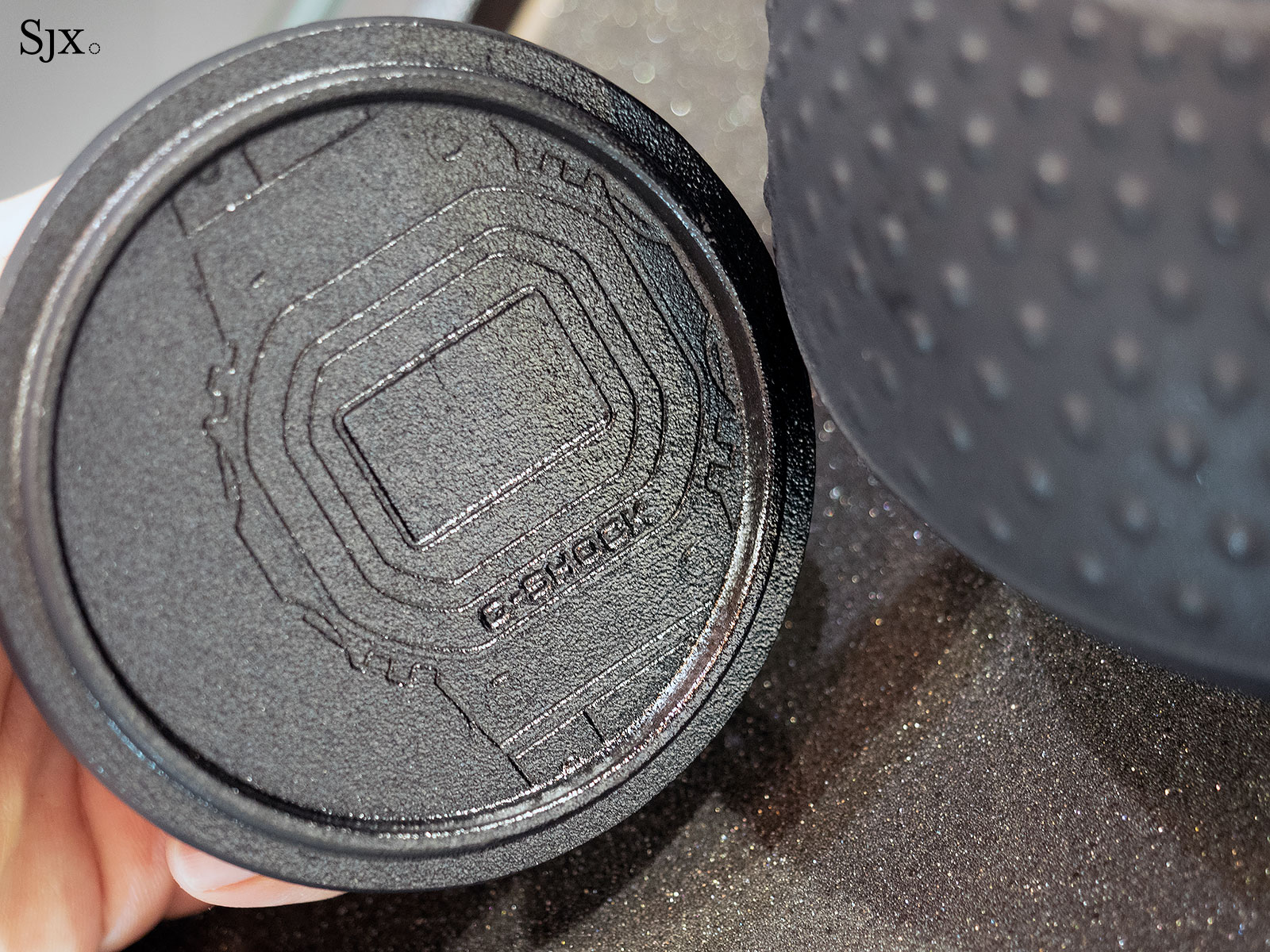 The underside of the kettle lid 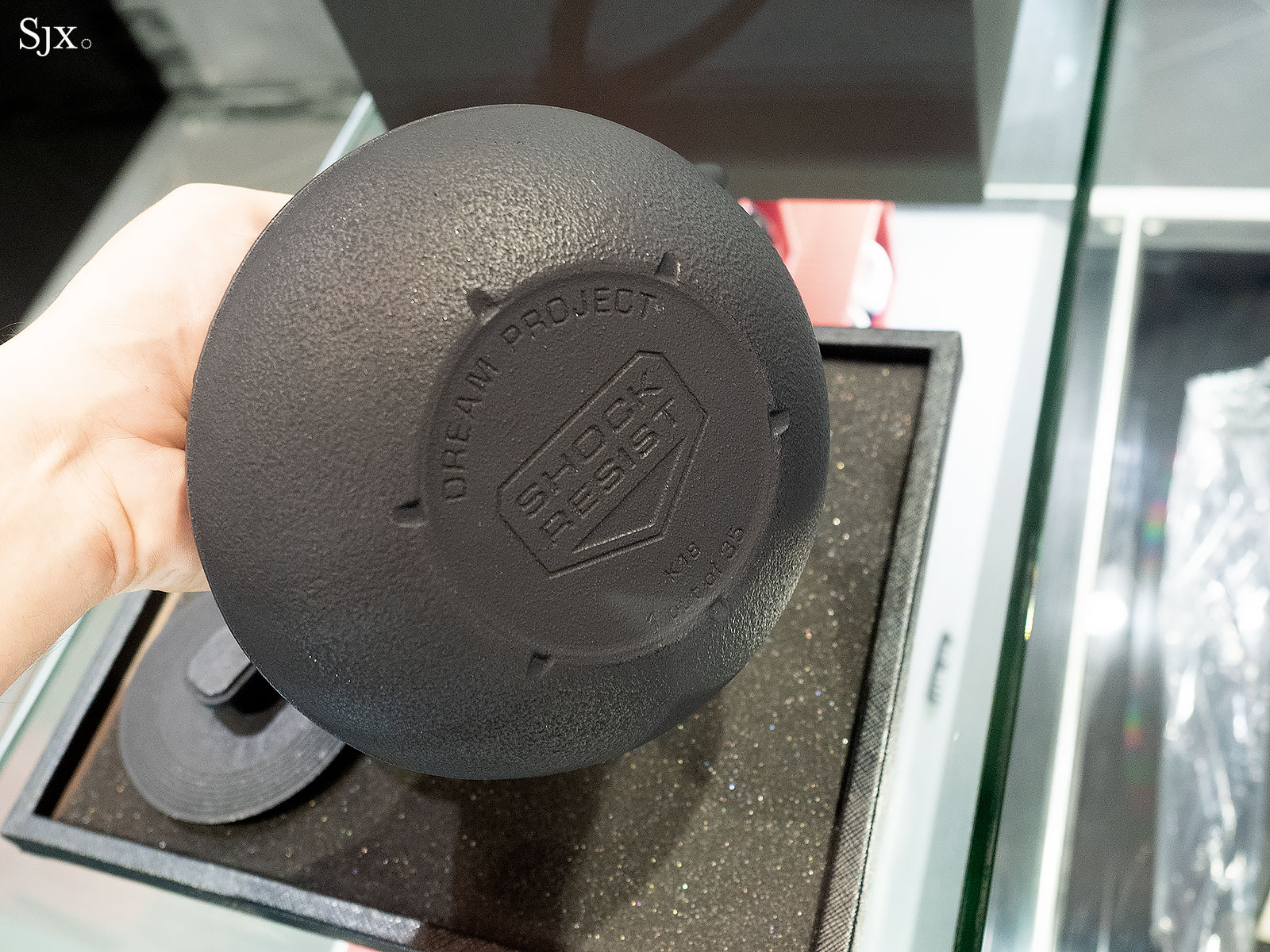 And also customised for the Dream Project, the underside of the kettle 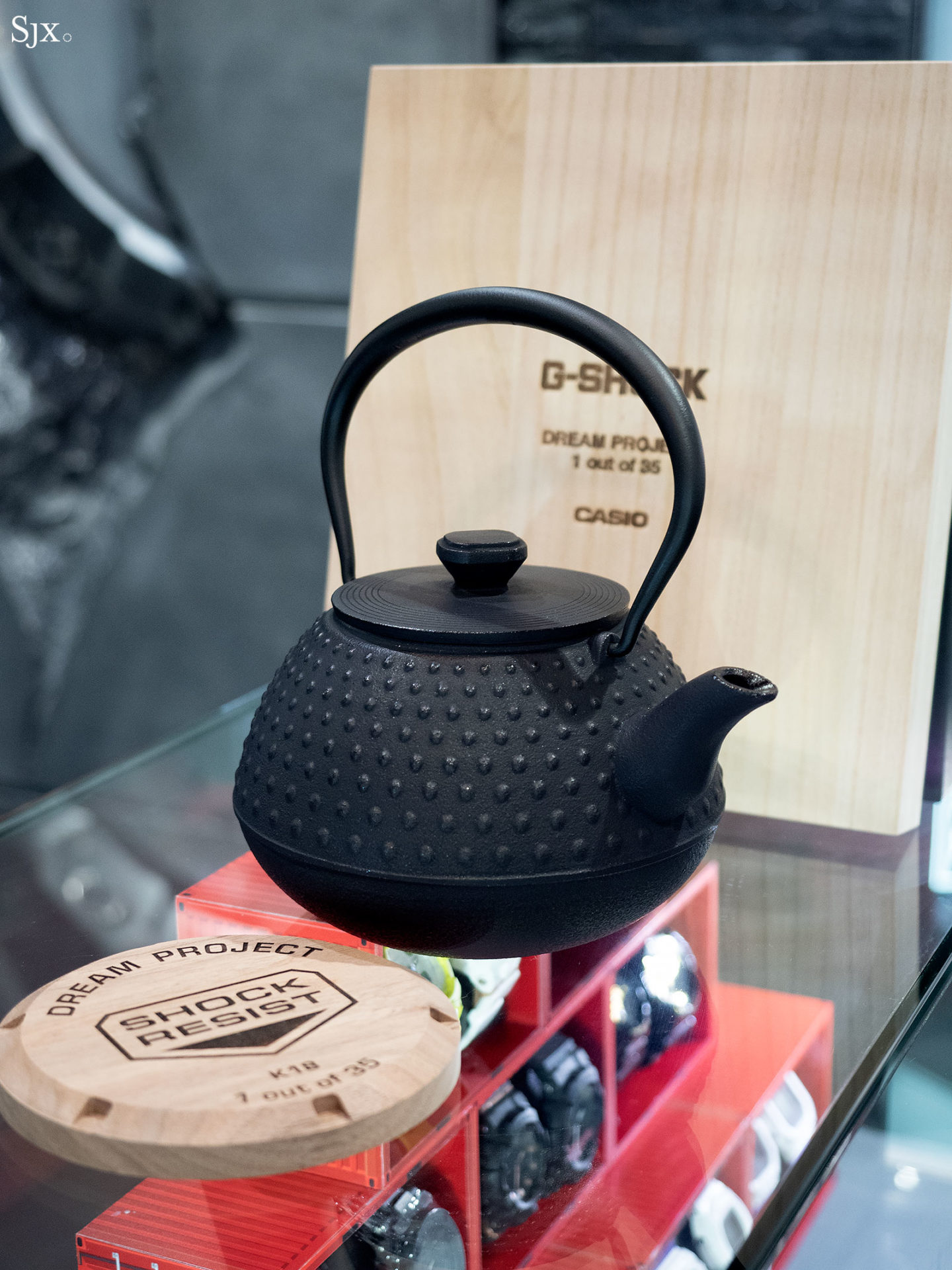 The kettle, complete with wood coaster

And within the kettle sits the Dream Project in a great bit of irony – the solid-gold whopper covered in iron and plastic. 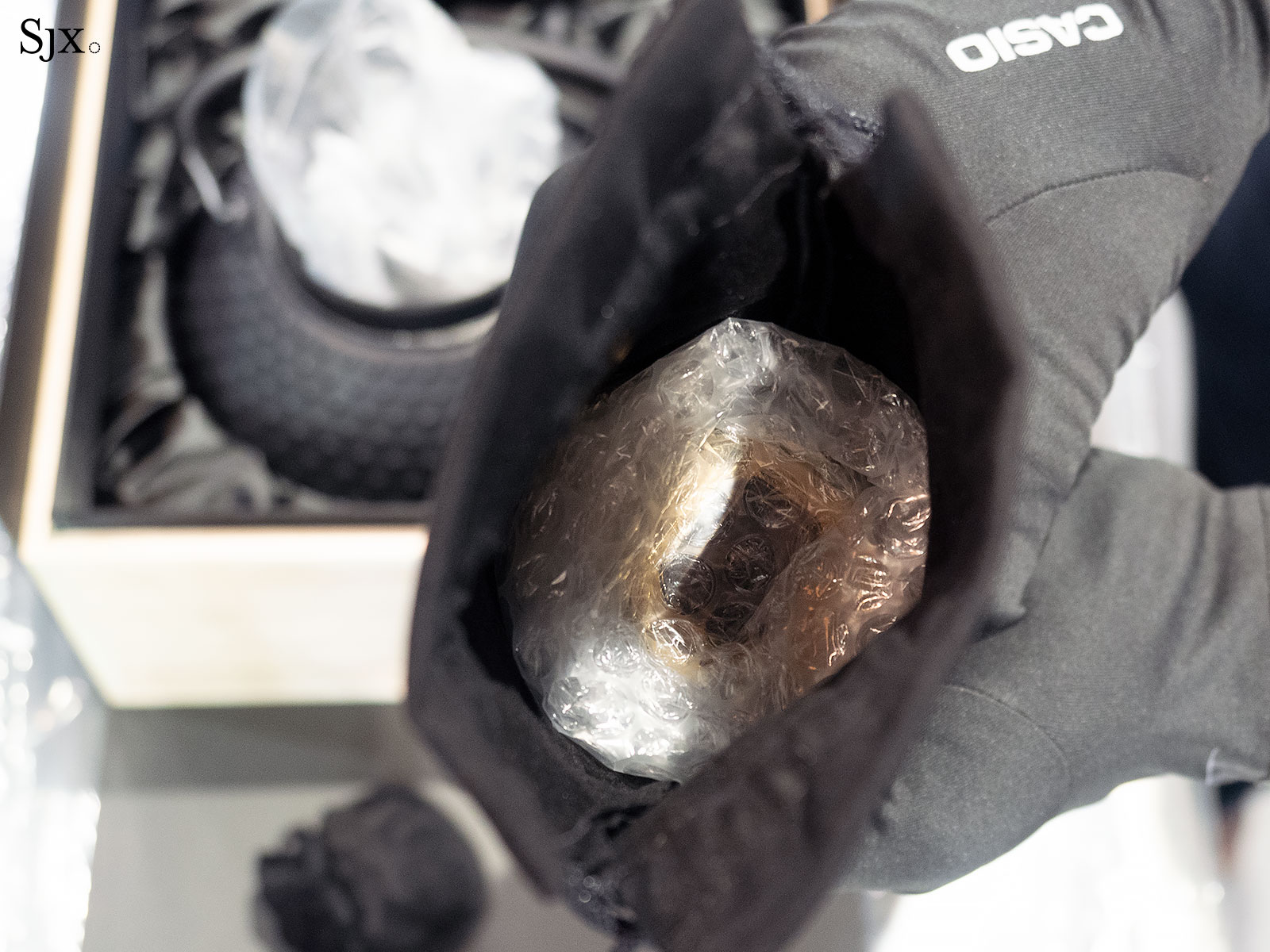 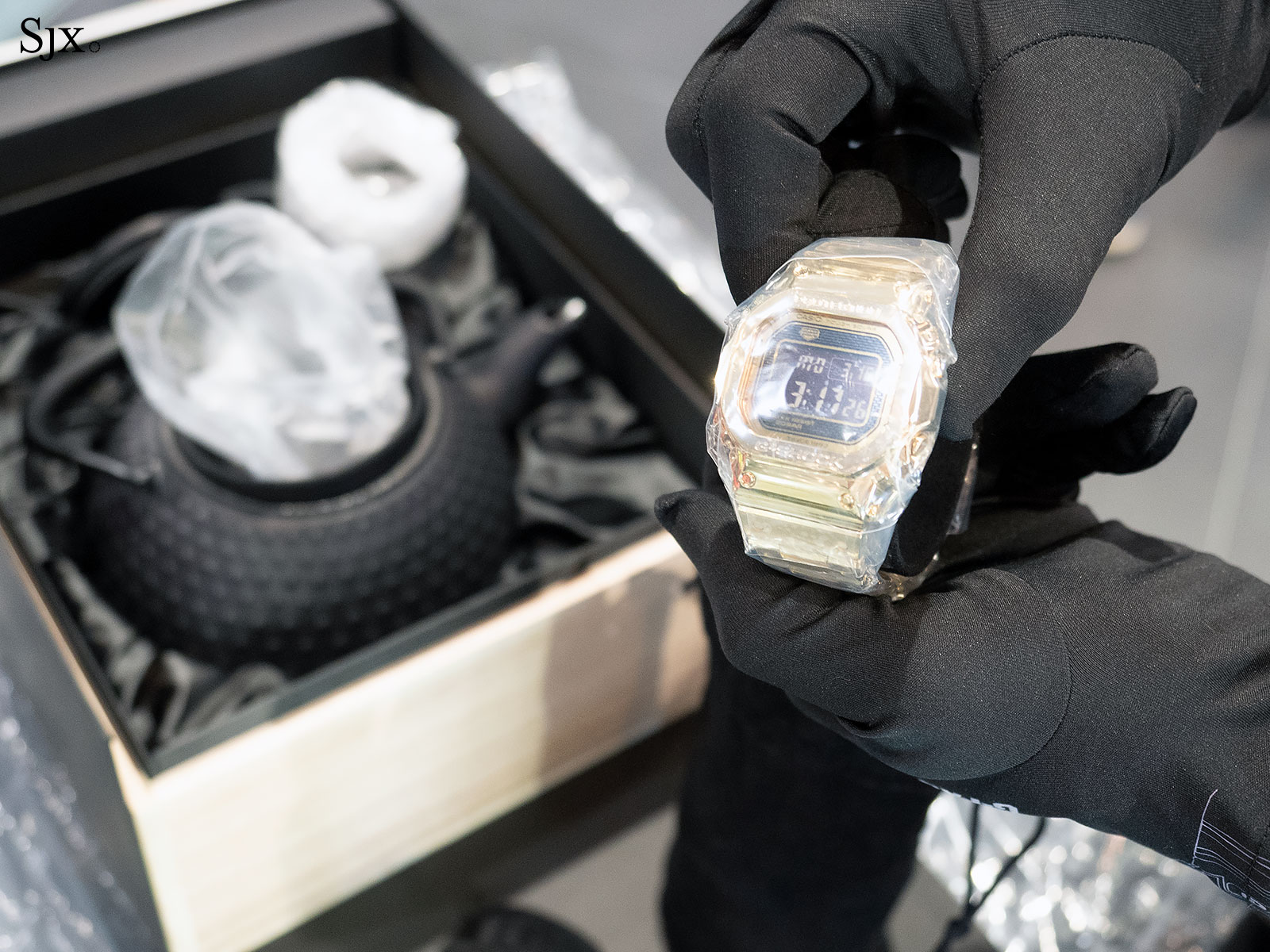 Out of the plastic the Dream Project is resplendent and shiny.

The case is entirely mirror-polished 18k yellow gold, while the bracelet, also 18k yellow gold naturally, has an alternating brushed and polished finish on the links.

There’s a lot of yellow gold in this watch – especially since the electronic module inside is more compact than a mechanical watch movement – and it feels like gold. The Dream Project is a bit of a paradox – it’s the most expensive G-Shock ever by some margin, yet it is also low key because most would be hard pressed to differentiate this from the standard, gold-plated G-Shock “Full Metal”. But whether it’s a paradox, contradiction, or even a plain ridiculous idea, the Dream Project is cool.

In any case, the verdict doesn’t really matter, because G-Shock Dream Project is entirely sold out.