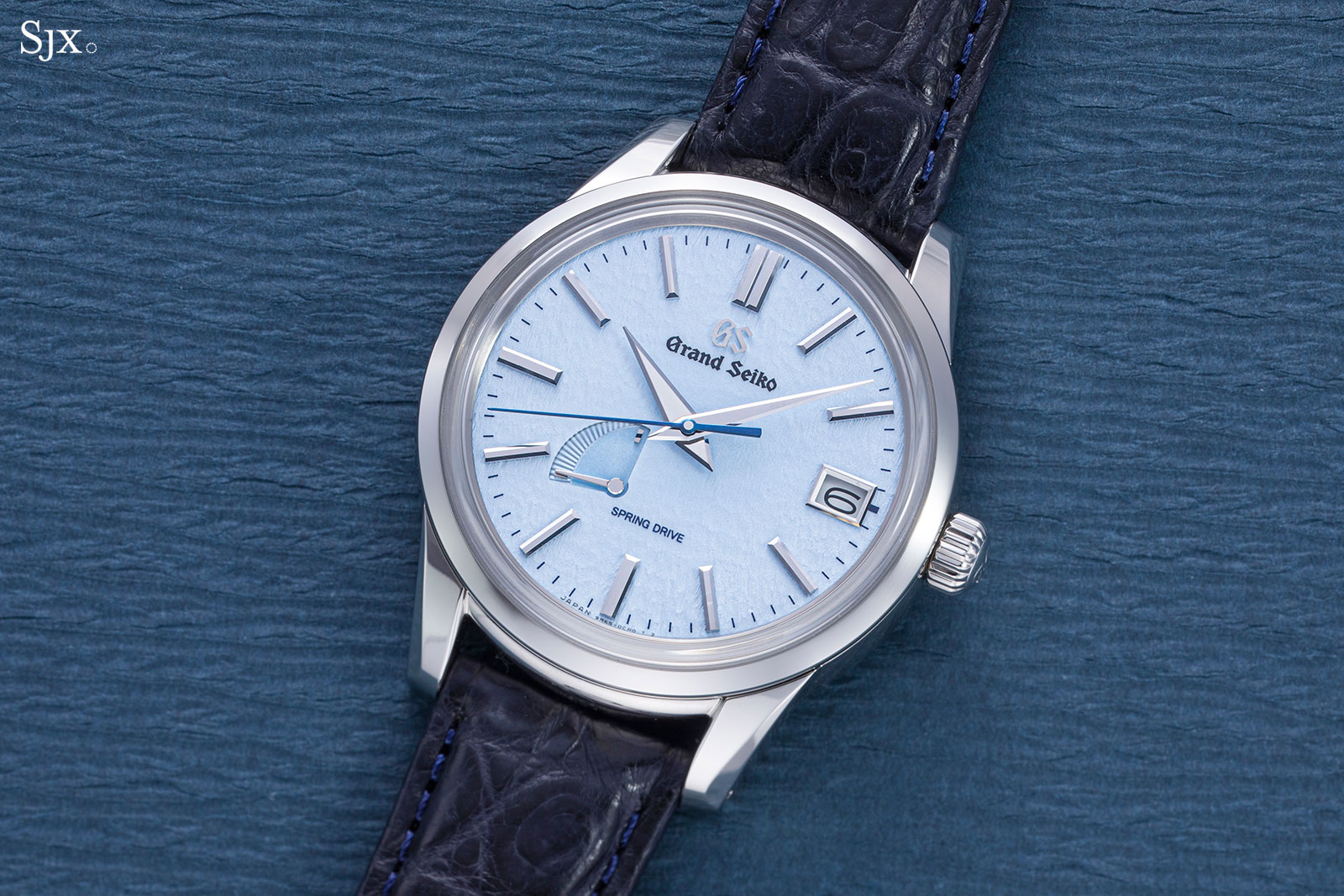 One of the all-time best-selling Grand Seiko watches is the Spring Drive “Snowflake”, which gets the name from the its distinctive textured dial. And until recently, the snowflake dial was only available on models with bracelets, save for a few pricey limited editions with gold cases.

That changed last year when Grand Seiko debuted the Spring Drive “Blue Snowflake” SBGA407. It combines the famous dial with a more classical case, and a good deal of practicality – date, Spring Drive accuracy, and a surprising 100 m water resistance.

While most Grand Seiko watches are pretty discreet on the wrist, the “Blue Snowflake” makes a statement due to its colour. The styling is most definitely old school, but the pale-blue dial is both modern and unusual; it’s an unorthodox colour for a man’s watch, especially one that leans towards the dress-watch category, but it works. 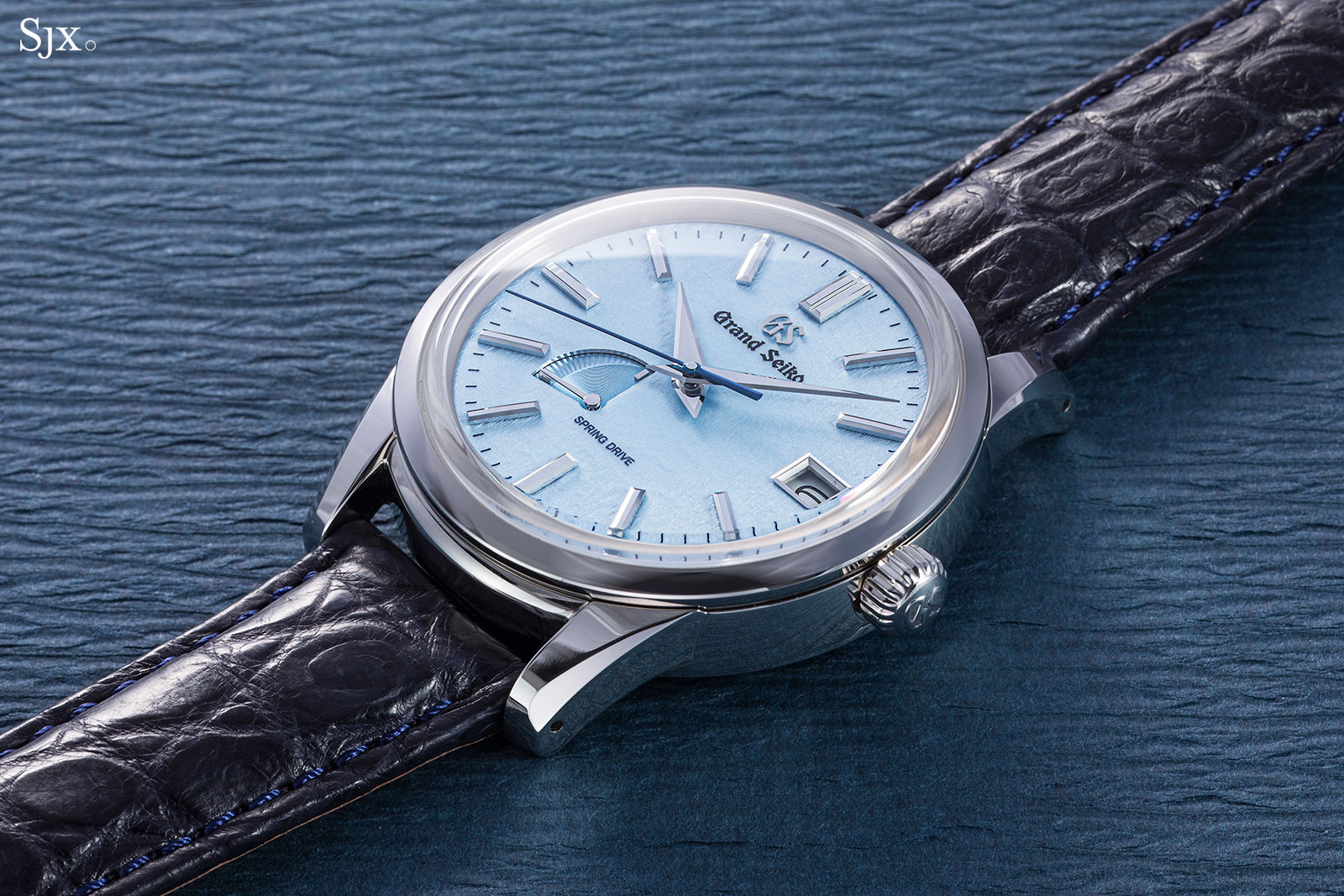 And the “Blue Snowflake” is also a manageable but modern size. The case is a bit over 40 mm in diameter, and fairly thick, while the bezel is narrow. The result is a watch that wears well and has a good presence on the wrist (with one caveat that is common to Grand Seiko watches on straps: the band has odd proportions, with one side being unnecessarily long).

Finished with a fine, vertically grained texture, the dial was meant to evoke the freshly fallen snow on the mountainous landscape during winters in Shiojiri, the small city in Nagano prefecture that’s home to the Shinshu Watch Studio (located within a Seiko-Epson facility) that produces Spring Drive watches. Even though the dial was brass, the variegated surface looked almost soft, like snow. 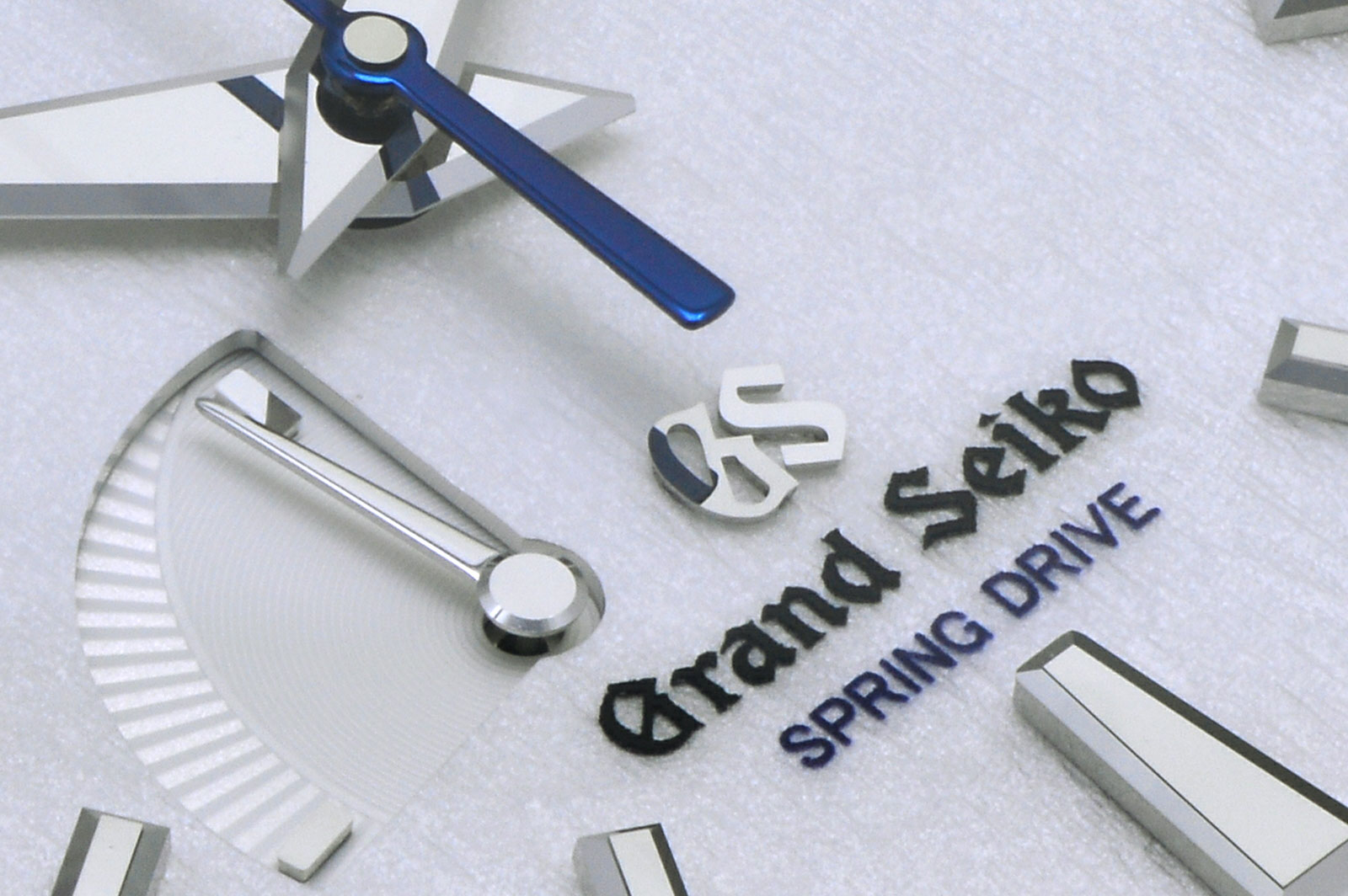 The impetus for the dial arose in 2004, the same year the very first Grand Seiko Spring Drive made its debut. With the snowy peaks around Shiojiri as inspiration, the development team combed the company archive for something that might work. And they found it in the oblong 56GS of 1971, which had a textured dial and case. 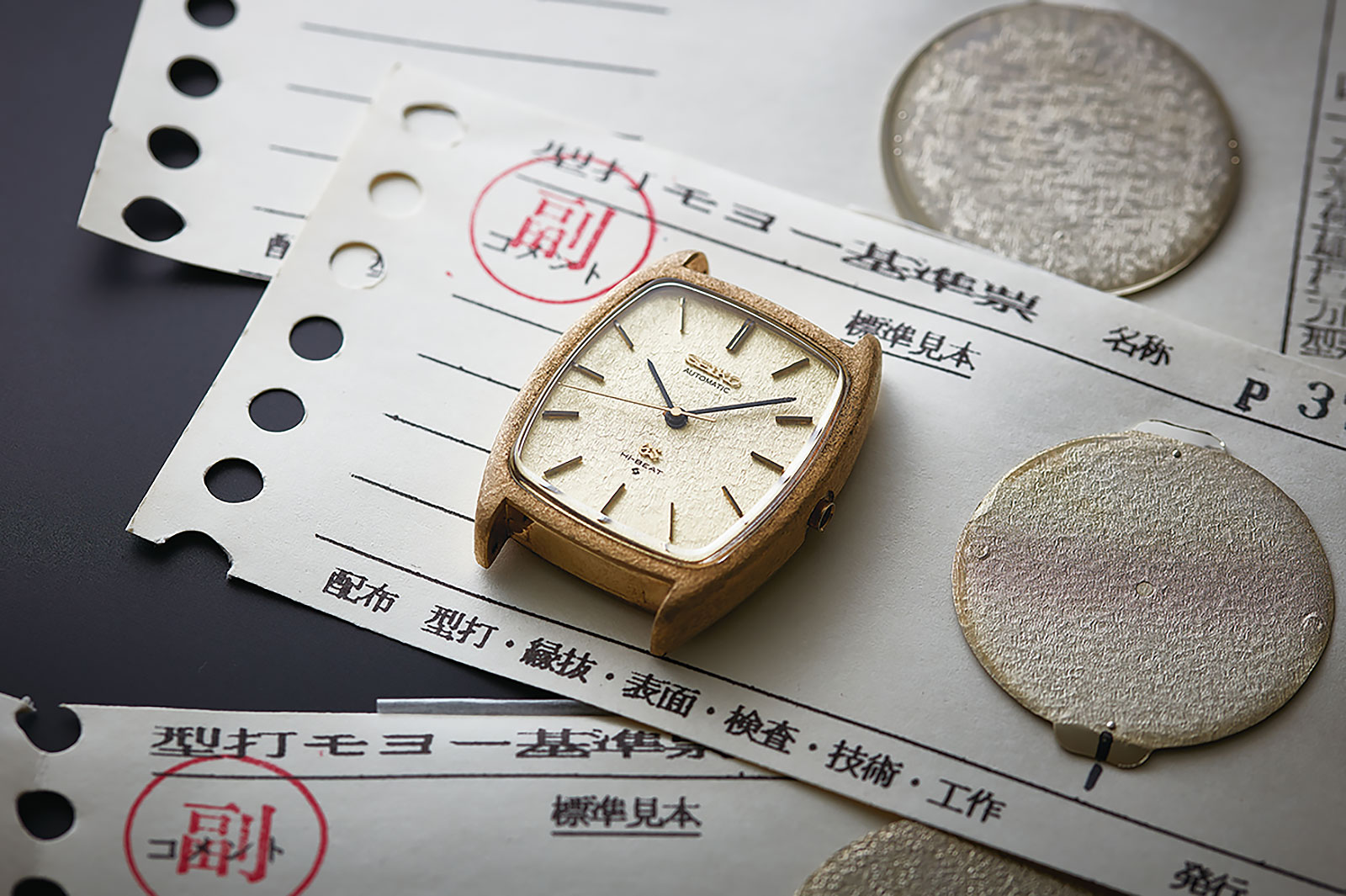 With the vintage dial as a guide, the “snowflake” dial was born. It starts as a dial blank, essentially a brass disc, that’s stamped by a 200 tonne press, creating the distinctive texture. The next key step is plating it with a specific silver alloy that creates the white finish. And along the way the dial is also drilled, printed, and applied with hour markers, for a total of 80 steps from brass disc to finished dial.

Since then Grand Seiko has introduced several variants of the “Snowflake”, including one with gold markers and hands (SBGA259) as well as a variety of limited editions. Last year, Grand Seiko debuted the “Blue Snowflake” SBGA407, the first of the series on a strap instead of bracelet, and also the first one in a smaller, less sporty case, giving it a notably different look from its counterparts.

The new “Snowflake” is essentially a colour variant of the original, retaining the same gentle texture but now in a powder blue colour that stays faithful the original inspiration of snow-capped mountains. Achieved by varying the plating on the dial blank, the colour is a soothing shade that shows off the texture well.

Less stark than the bright-white, original “Snowflake” dial, this dial is an uncommon colour, especially in a man’s watch. Because of its strap and case design, the “Blue Snowflake” is more of a dress watch than the other “Snowflake” variants, but the dial colour has the opposite effect. On the wrist the watch looks and feels like a lively, contemporary watch. 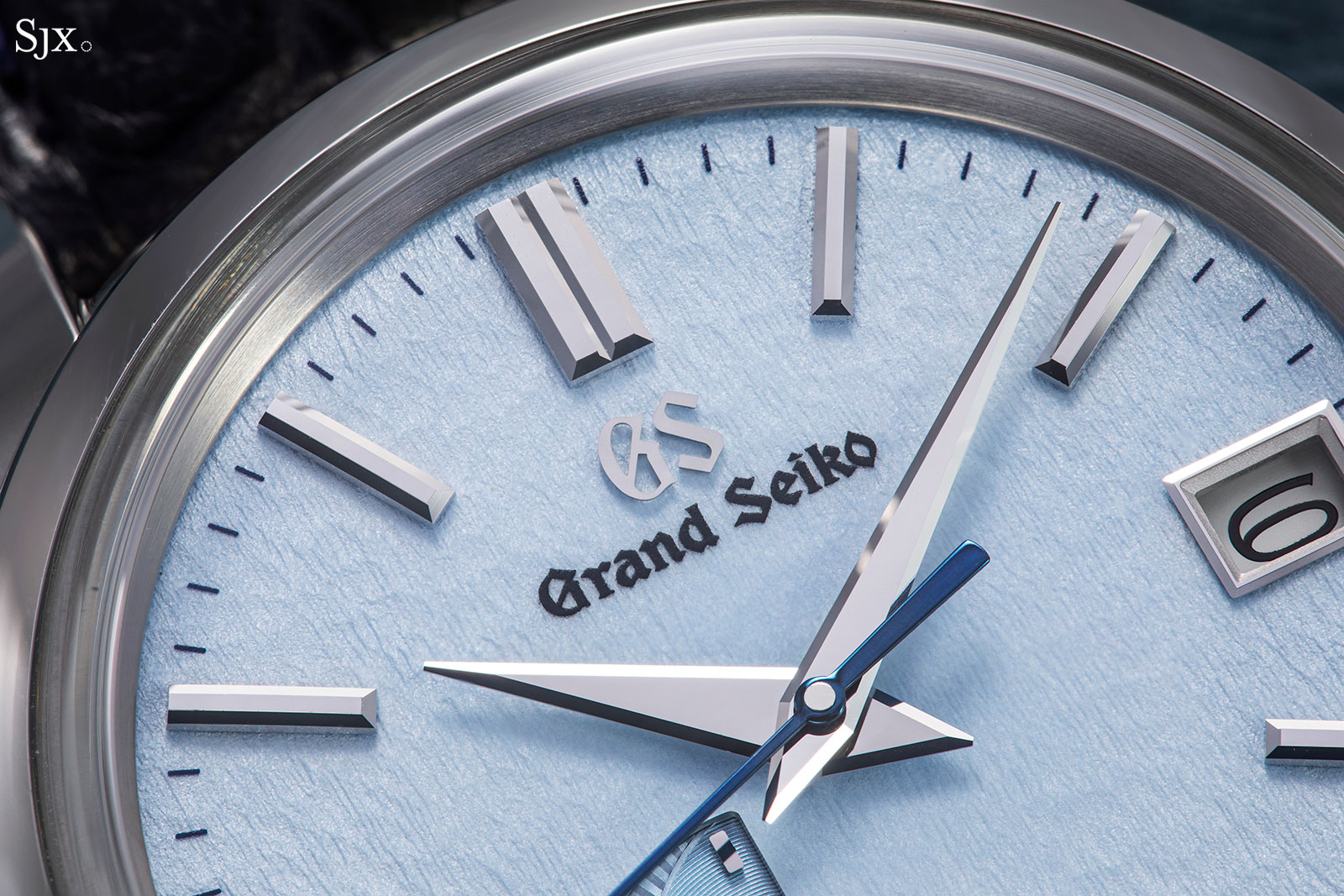 The entire dial is elegant and subtle in design and details. Take the power reserve for instance: the indicator is faintly shaded so that the scale darkens towards the bottom where it indicates fully wound. 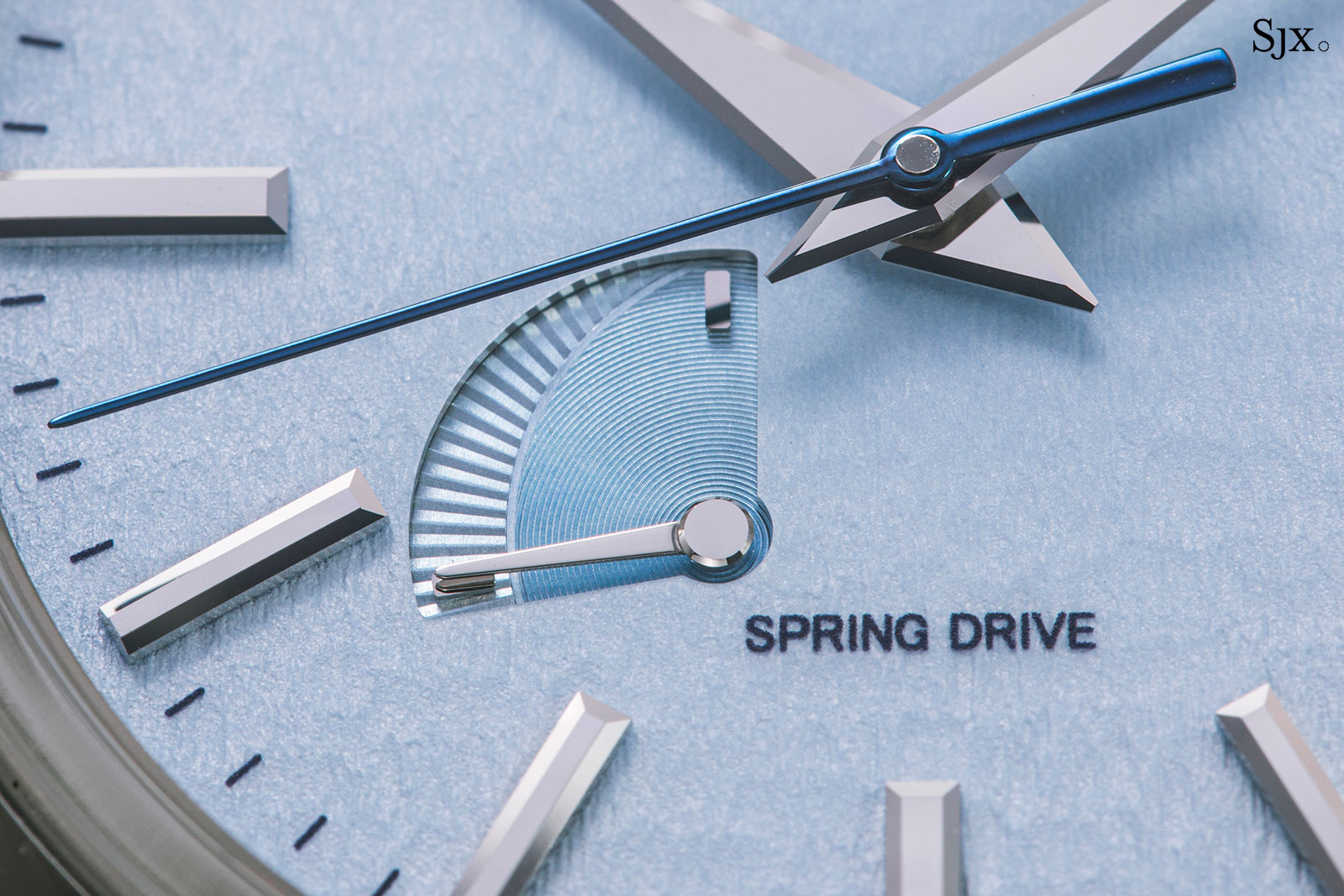 While the colour is fairly novel for a Grand Seiko, the quality of the dial is typical. Every element is sharply executed and finely finished, even under magnification. Both the hands and hour markers are machined with a diamond-tipped tool, resulting in precise edges and mirrored surfaces – a quintessential Grand Seiko feature.

The date window, on the other hand, is a less important detail that captures the thought that goes into the design, as well as the quality of manufacturing. It bevelled edges with contrasting surfaces – polished on the outer edge and sandblasted on the inner edge.

The two surface finishes are not merely for aesthetics; the matte inner edge is to avoid reflections around the date numeral, while the polished outer edge serves to highlight the window and make the date display stand out. Unlike the Grand Seiko “Thin Dress”, for instance, which has a newly-designed case, the “Blue Snowflake” relies on a classic Grand Seiko case style that’s been in the line-up for almost two decades, having first been used for automatic Grand Seiko models. Unlike the newer case designs that have fancier styling and varied surface finishing, this case is straightforward but does everything just right – and incorporates a few details that make it better. 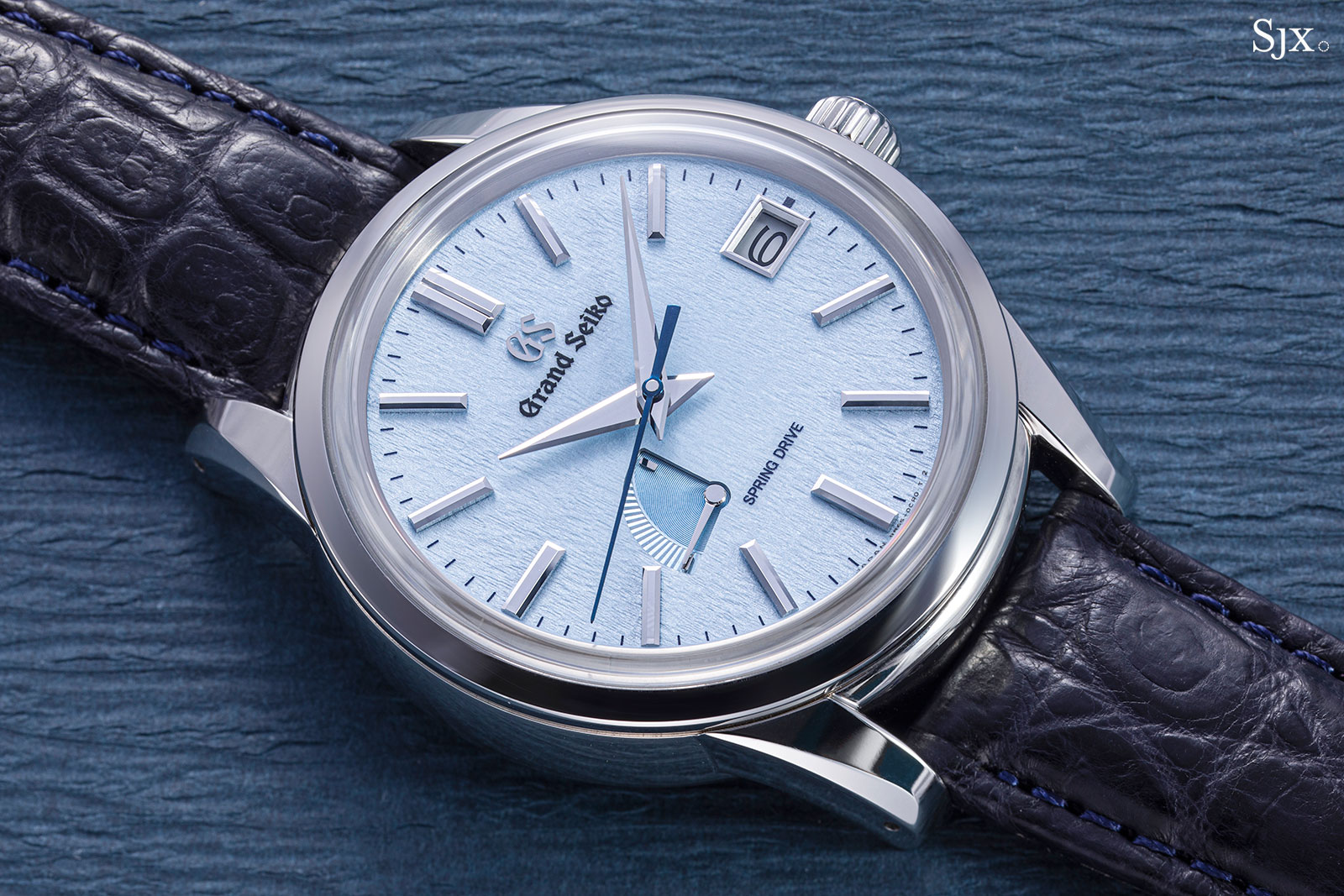 The case is a moderate size, at a little over 40 mm in diameter, but most crucially, it is proportioned well. The lugs are just nice in length and size, while also having tapered bevels on the outer edges for a bit of refinement – this is the details that make it better. 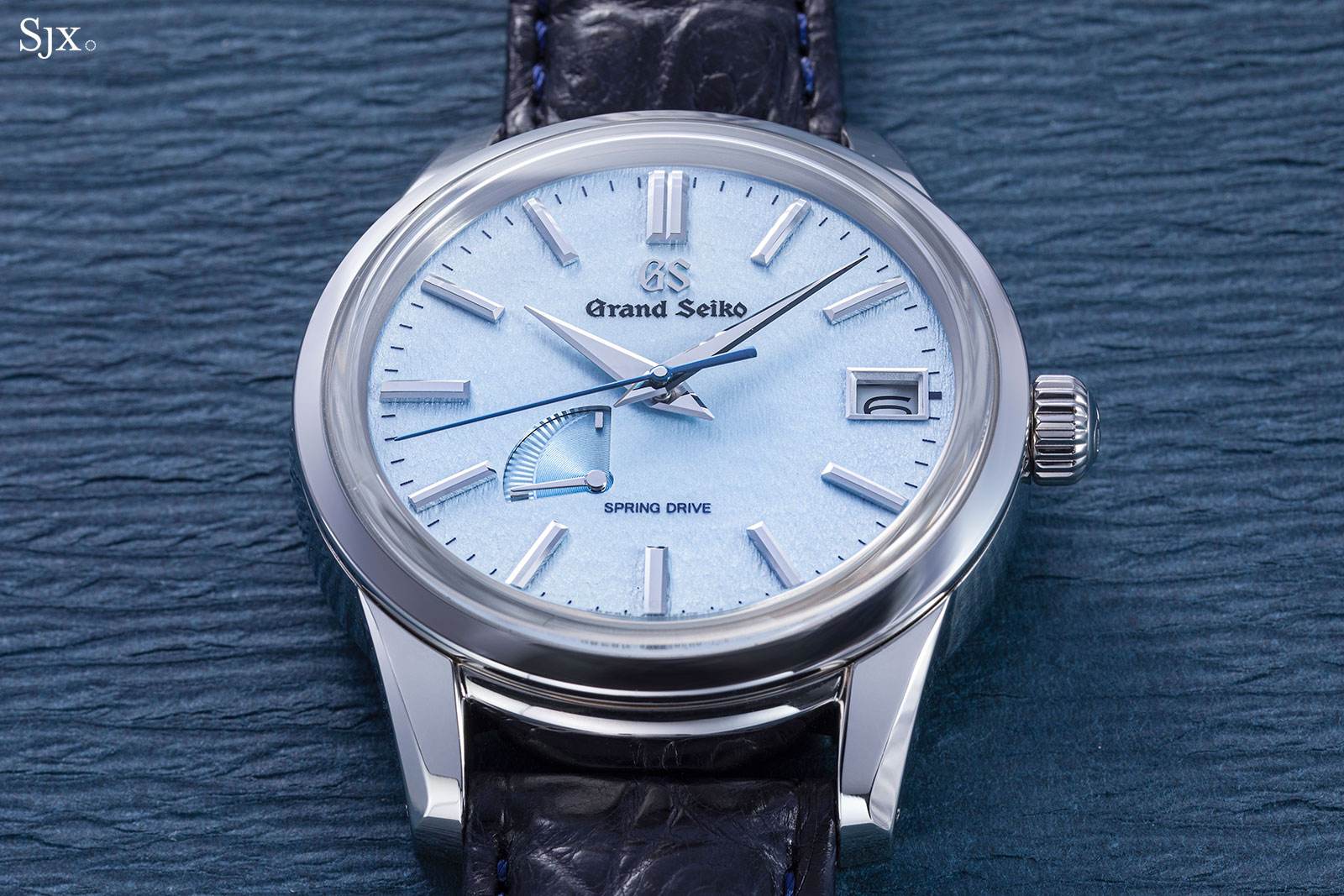 The Zaratsu-polished lugs catch the light perfectly, with the reflections on their surfaces being practically distortion-free

Notably, the lugs sit relatively high on the case hand, touching the base of the bezel while being a distance from the case back.

This smart detail helps camouflage the height of the case, which at 12.8 mm is fairly thick, since the height below the lugs isn’t obvious visually, so on the wrist the watch looks thinner than it actually is. Importantly, the case is robustly constructed, despite having the looks of a dress watch case. It’s sturdy, rigid, and rated to an impressive 100 m of water resistance.

The case has a uniform mirror polish on every surface, front and back. It’s not interesting in the sense that there’s no variety, but it works perfectly for this case style.

And more importantly, the polished finish is done extremely well, especially on the lugs – which are treated differently from the rest of the case.

The four lugs are finished with the Zaratsu technique, which relies on a lapping machine that produces an exceptionally flat polished surface with minimal distortion. Based on machines once produced by Swiss machine-tool maker Gebrüder Sallaz, the machine is proprietary to Seiko, though similar equipment is produced by Japanese specialist Hayashi Seki and used by other Japanese watch brands. As a result, the surfaces of the lugs are subtly different from the other surfaces – compare the lugs to the flat bezel for instance – but the difference is only discernible up close.

The “Blue Snowflake” is powered by the 9R65 – the same calibre found in the original “Snowflake”. It’s a long-lived, highly practical movement that tells the time, while also having the date and power reserve.

Because it’s a Spring Drive – a mechanical movement with an electronically-regulated oscillator – the 9R65 runs near-perfect. The movement is rated to within a second a day – and 15 second a month – but in practice a Spring Drive movement runs almost spot-on. 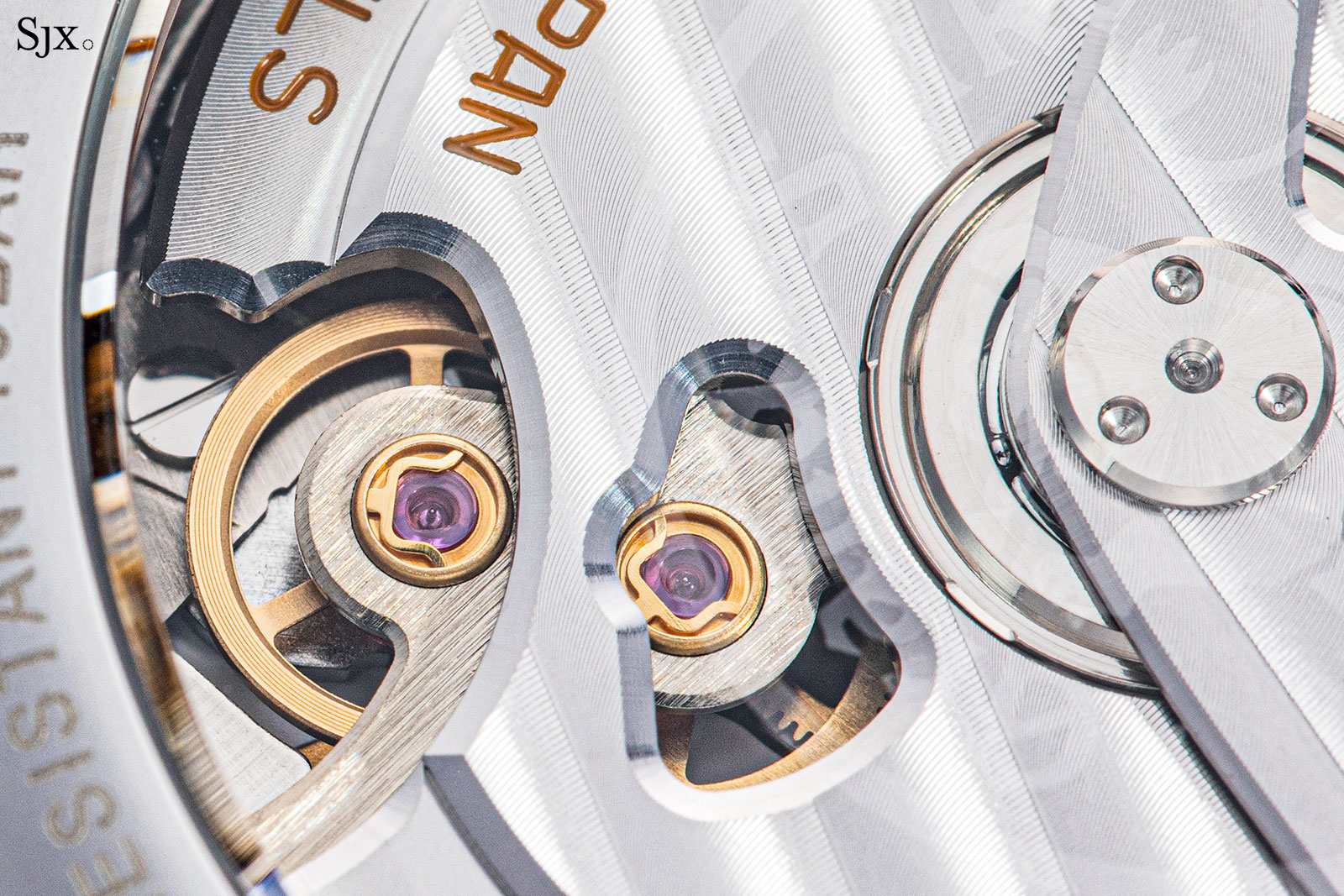 A display back shows off the movement, which sits under a lightly etched Grand Seiko lion emblem on the underside of the sapphire crystal. The look is very much the Grand Seiko look (though the recent launch of the new-generation 9RA5 movement changes that; more on that below). For someone used to conventional Swiss decoration – usually machine-executed finishing done to resemble hand-finishing – this is an unusual style. But there is beauty in the meticulous, mechanical look; the movement is a machine that functions flawlessly, and looks that part. Half of the Y-shaped, Magic Lever winding pawl is visible, right beside the large screw for the barrel ratchet wheel

The approach to the movement is exemplified in a part that most people would never notice – the winding click. A beautifully-executed piece of kit, the click has a mirror polished top, along with polished, bevelled edges. Even though winding click appears to be hand finished, it is actually forged – creating via a stamping process the results in a denser, harder part. It is both functional and beautiful – and created by mechanical production methods. With the recent launch of the next-generation 9RA5 movement in the 60th Anniversary Spring Drive Diver SLGA001, the 9R65 will presumably be phased out in favour of a new calibre, though in practical terms there’s no need to – the 9R65 does what it is supposed to do, and does it well.

The “Blue Snowflake” ticks all the boxes for an excellent, everyday watch, combing a robust case in a manageable size and reliable timekeeping thanks to Spring Drive. And it is a good-looking watch with a dial finish that’s unique to Grand Seiko.

In addition, the “Blue Snowflake” also ticks all of the boxes given my personal tastes in Grand Seiko. I have always like the snowflake-pattern dial, but with only a handful of exceptions, I prefer Grand Seiko watches on straps. And I’ve always liked this particular case style; it’s is a little old fashioned but that’s the appeal.

The only thing I’d wish for is a return to the old-style Grand Seiko dials, which had both the Seiko and Grand Seiko logos – a feature that provided more vertical balance to the face of the watch. But now that Grand Seiko is its own brand, so that’s an impossibility.