Just before the new year, Swiss competition regulator COMCO, also known by its German acronym Weko, announced a provisional suspension of ETA’s right to sell movements to third-party brands. Once the dominant supplier of mechanical movements in Switzerland, ETA and its parent Swatch Group have been embroiled in a decades-long dispute with COMCO over the movement maker’s allegedly anticompetitive practices.

Now the dispute between Switzerland’s largest watchmaking group and COMCO has taken a fresh turn with the Swatch Group filing a complaint with the Swiss federal court on January 20, demanding a repeal of COMCO’s decision to suspend sales, a move first reported by Swiss newspaper Neue Zürcher Zeitung (NZZ).

An example of an ETA movement with upgraded features that ETA only supplies to sister brands; seen here inside a Hamilton

According to the competition agency, the suspension of sales is meant to further weaken ETA’s market power as a major movement supplier, while allowing space for other movement suppliers to ramp up production and build their order books. The suspension remains in force until summer 2020, when COMCO will reach a final verdict on ETA’s rights and obligations.

COMCO did allow a narrow exception to the ban, allowing ETA to sell its movements to small- and medium-sized watch brands that are existing clients. But the exception came a stipulation: Swatch Group has to treat all clients equally, which means selling movements to one small brands requires it do the same for another. This was another requirement that deeply irks the group’s management.

Having made its outrage at the COMCO ruling known, Swatch Group points out that it requires nine to 12 months to fill orders for movements, meaning the sales suspension prevents ETA from supplying movements to anyone until 2021 at the earliest. In its complaint, Swatch Groups wants the suspension lifted, giving it not just the right to sell its movements to whoever it wants, but also the ability to sell as many movements as it wishes.

COMCO has until February 25 to respond to the procedural motions of the complaint. With an annual output of just over four million watches, Tissot is Switzerland’s largest watchmaker by volume, with the bulk of its watches being affordable and quartz. But it has also carved out a niche with equally affordable mechanical watches starting at a bit under US$400 for the Swissmatic (a close relative of the Swatch Sistem51 movement).

One step up is the Powermatic 80, an automatic movement that more closely resembles a traditional calibre – with more metal components and less plastic bits. A complicated model within the family, if it can be called that, is the Tissot Chemin des Tourelles Powermatic 80 GMT. It’s a dual time zone automatic starting at just US$875 – a value proposition that is also unusual in being one of the few GMT watches price below US$1,000.

Chemin des Tourelles is the street in Le Locle where Tissot has had its factory since 1907 (though the brand was founded in 1853), sitting beside the facilities of Mido, Montblanc, and Vulcain. Unsurprisingly, the Chemin des Tourelles GMT is traditionally styled, though surprisingly large; the collection also includes a similarly affordable time-only automatic as well as a chronograph.

The case is simple in form but appealing, with a surprising degree of detailing. The look is enhanced by the polished bevel on the outside edge of the lugs, which also have a notch where they join the case. And the case and bezel also have contrasting brushes and polished surfaces, making the whole more visually interesting. While the finish is basic, it leaves the watch looking better than if the surface was uniformly finished. 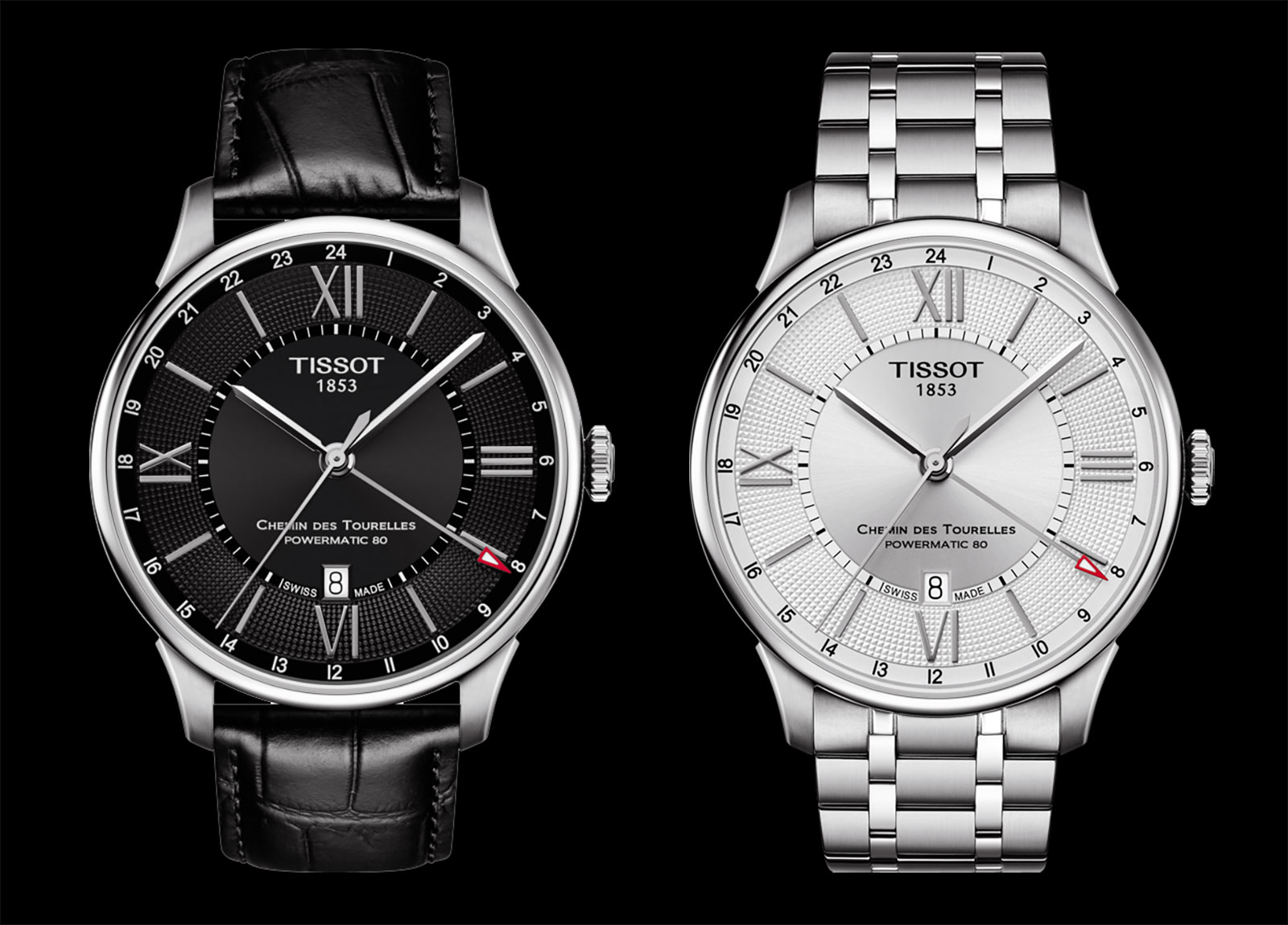 Pictured is the model with a gold-plated steel case, which is the least attractive of the variants because the gilt case looks inexpensive. The standard steel case works much better, and costs less.

Regardless of finish, all of the cases are 42 mm, larger than they need to be. Because the watch is so large, it feels less refined than it could be if it was say, 39 mm. The excess diameter is most obvious from the back, where the movement is tiny relative to the case.

One possible reason behind the size of the case is its height, a result of the movement inside. At 12.52 mm it is fairly thick, but does not seem so relative to the diameter. Reducing the diameter, on the other hand, would increase the apparent height of the case. 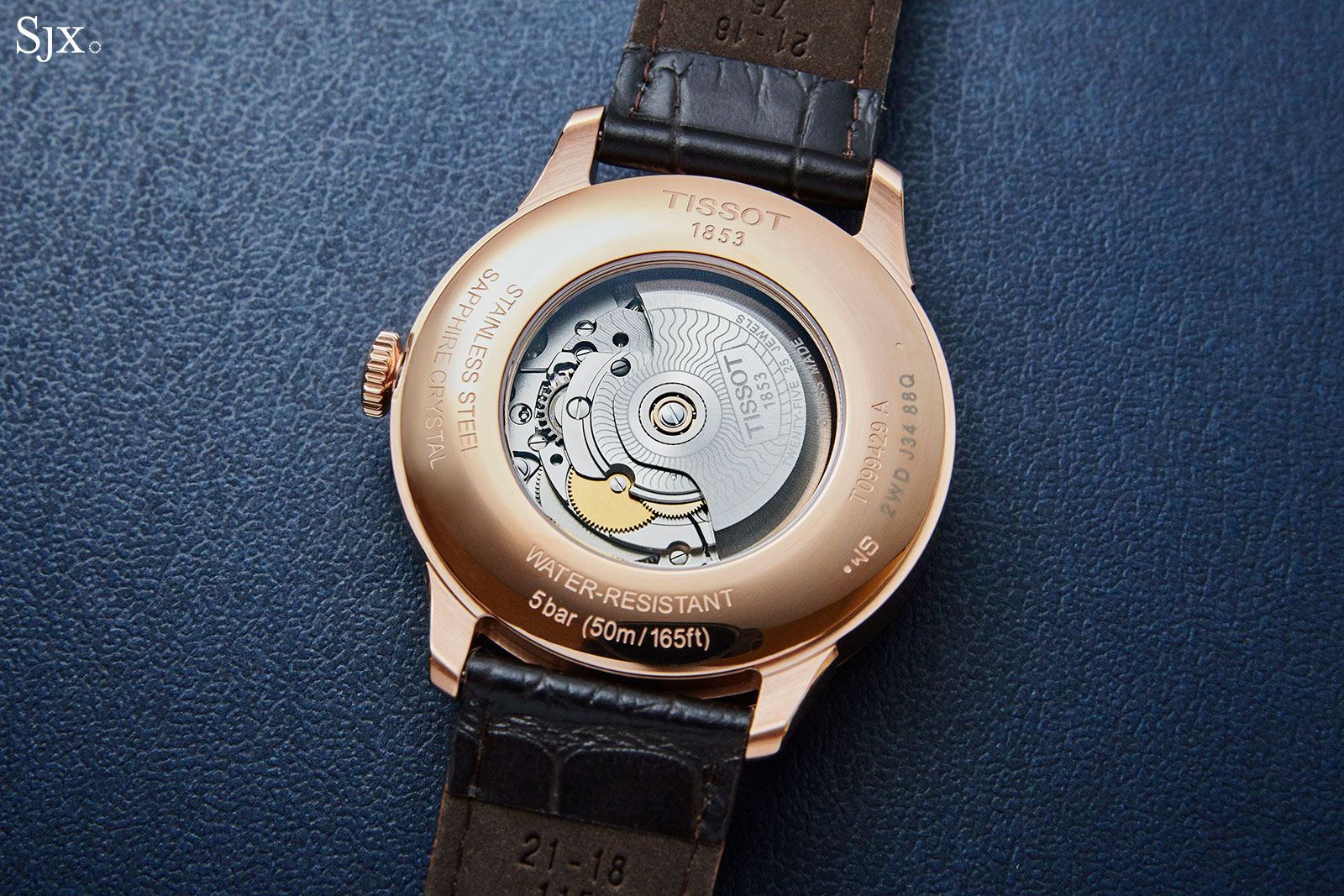 The dial is conservative in style, but avoids being boring with a stamped hobnail pattern on the chapter ring set against the radial brushing of the central portion. Add to that the applied hour markers and the result is a simple design that works well.

What doesn’t work is the position of the date window, which is small and so far up it is practically halfway to the hands – a consequence of the large case and small movement. And the dial also has too much text at six o’clock. 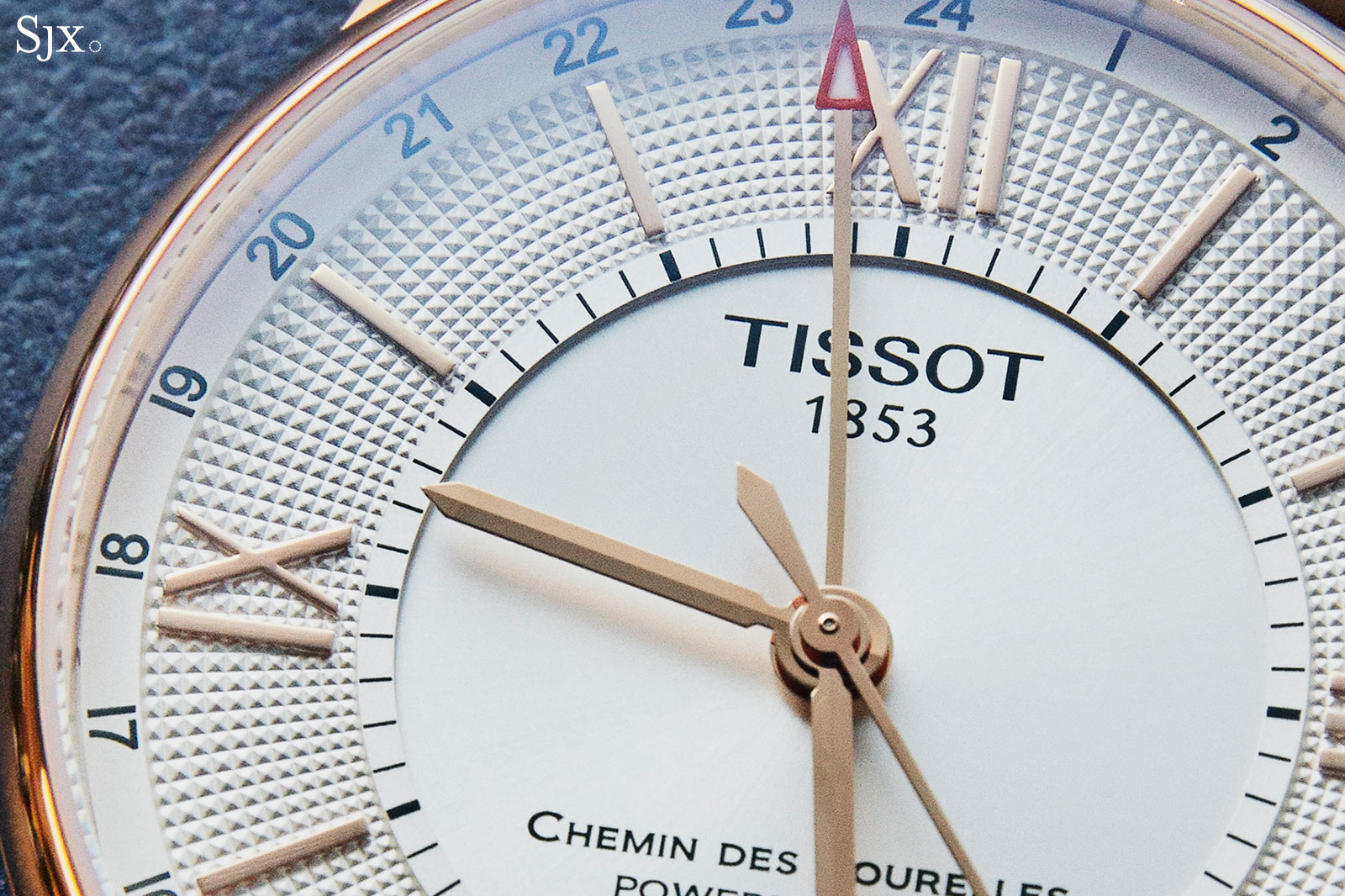 Function-wise the watch is straightforward: winding and setting is done via the crown, including for the date and second time zone. That’s courtesy of the Powermatic 80.661 inside.

It isn’t much to look at – the movement is a robust but low-cost calibre and looks the part – so the display back is unnecessary. But the Powermatic 80 is a solid offering for the money. The movement is actually an ETA C07.111, from the C07 series of movements that is actually an upgraded ETA 2824. The improvements improve functionality and ease of production, including an extended 80 hour power reserve, reduced balance frequency, and an escapement made of a self-lubricating polymer (basically plastic). And the balance is free-sprung balance wheel, featuring twin regulating weights that are presumably set by machine during assembly.

A diagram of the balance wheel. Source – Nivarox patent

Tissot’s parent, watchmaking conglomerate Swatch Group, supplies such upgraded movements only to its own brands. As a result, all its entry-level brands – Tissot, Hamilton, and Certina – offer watches equipped with C07 movements.

While all are priced similarly, they have mostly distinct styles. Hamilton, for instance, does best with retro, military-inspired watches, while Tissot’s offerings are mostly classical, like the Chemin des Tourelles. The base model Chemin des Tourelles with three hands and date

For someone seeking a traditional-looking mechanical watch – with a second time zone – the Chemin des Tourelles GMT is probably the most affordable option on the market. Though the styling is plain, the details on the dial give it a bit more life. And yes, the size is unnecessary, but probably inevitable from a commercial perspective given the broader preference for larger watches.

That being said, the watch is strong value for money, particularly with the GMT function that is uncommon at this price point.

Availability: From Tissot boutiques and retailers
Price: US$975 in rose-gold plate; US$875 in steel