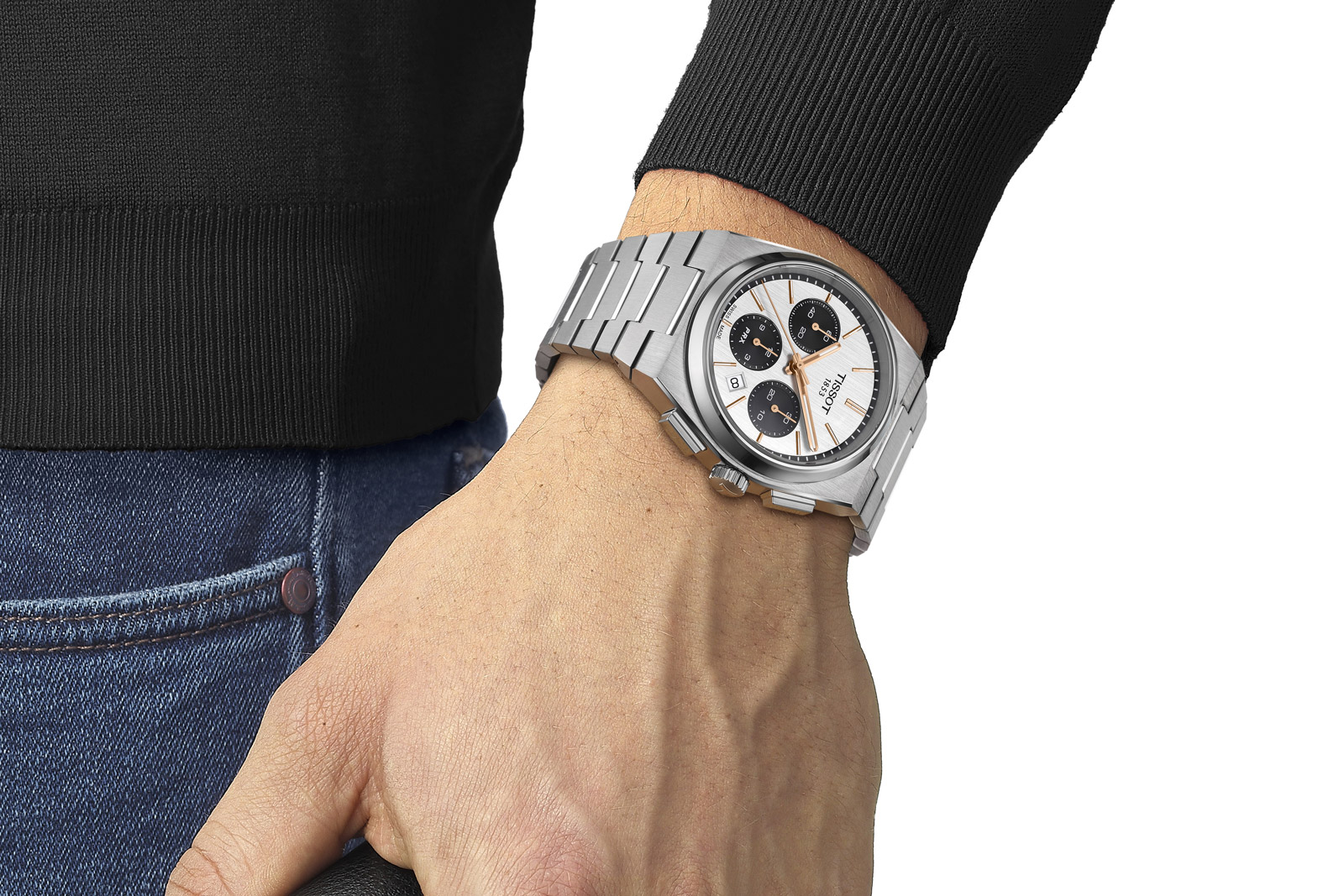 Originally a late seventies model that was relaunched in 2021, the Tissot PRX was unsurprisingly a smash hit, largely because it is one of the most accessible Swiss-made watches with an integrated bracelet. And now Tissot has elaborated upon the design with the PRX Chronograph Valjoux.

The PRX Chronograph is a logical but attractive iteration of the original idea. The angular case and bracelet that characterise the PRX are perfect in a larger size with a sporty, contrast-register dial.

More notably, Tissot made the smart choice of moving away from the typical (and sometimes boring) black and white for the “panda” and “reverse panda” dials, instead opting for more striking combinations – particularly the silver dial with gold markers. 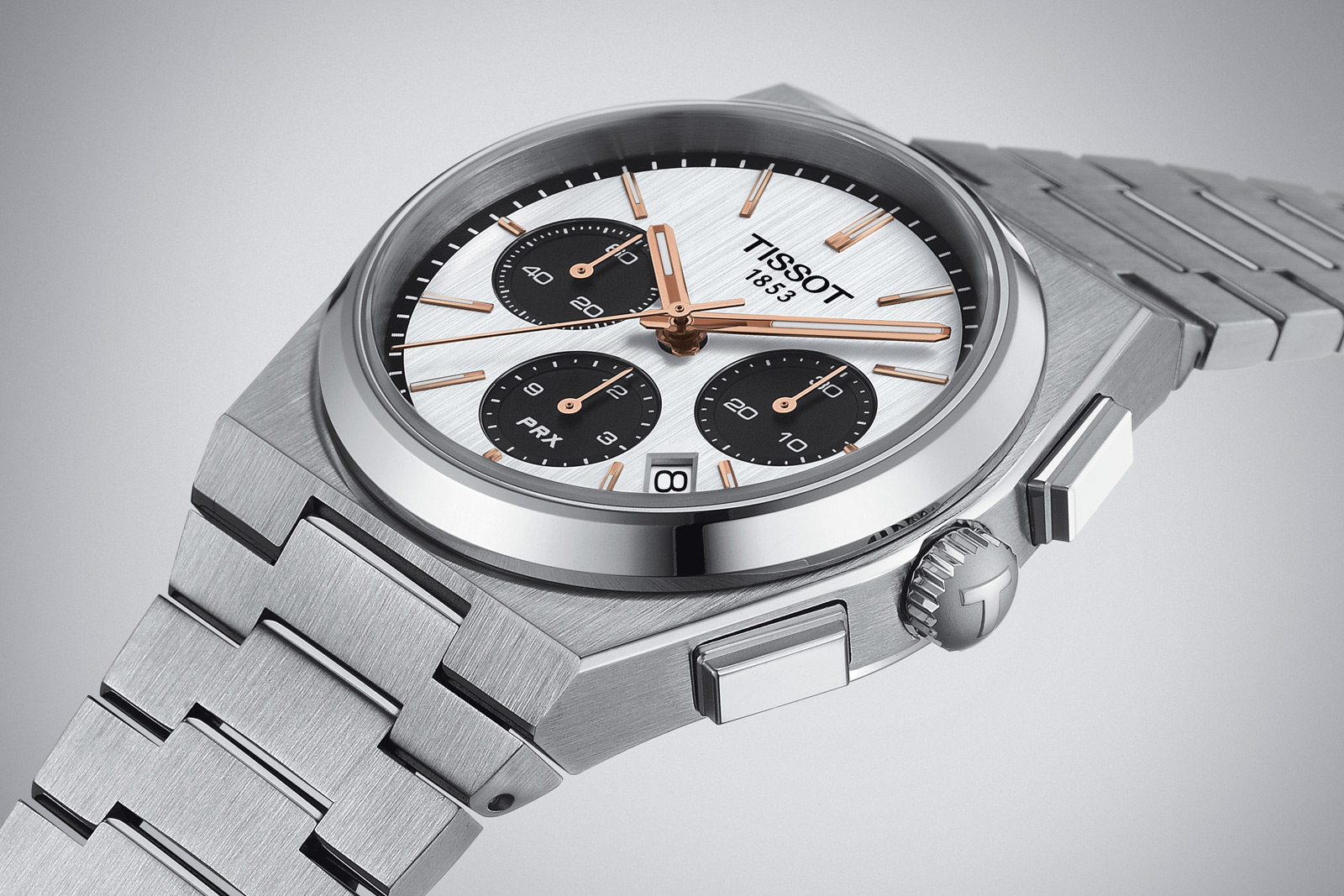 While the construction of the base-model PRX is simple, the chronograph gets more interesting as there is more real estate for details.

The stepped, rectangular pushers, for instance, are especially attractive because they echo the case shape, while also having slight bevelling along the edges that add a bit of visual refinement. 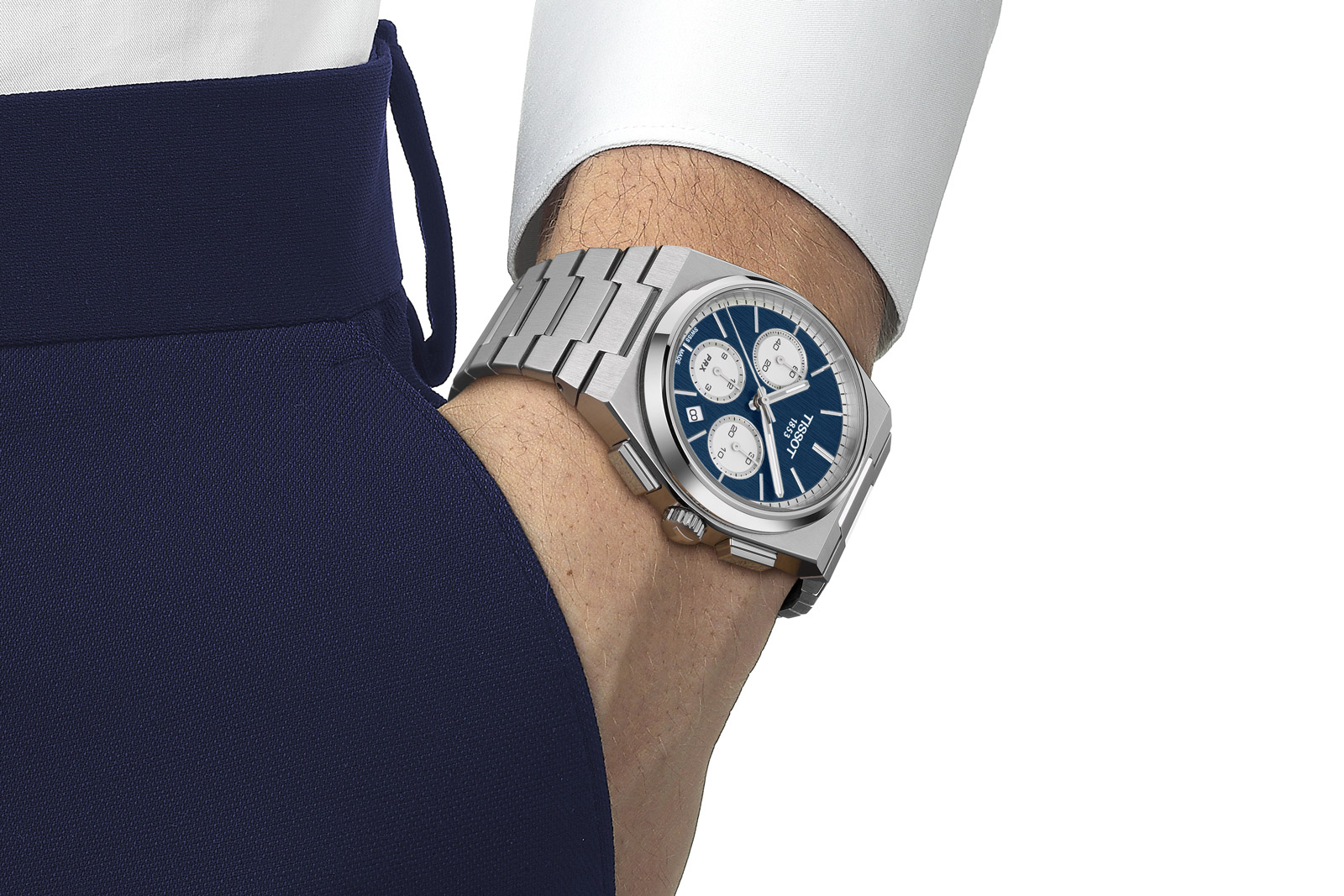 While the design appealing, it’s weighed down by the case thickness, which is almost 15 mm. That said, given the case is wide at 42 mm in diameter, it has good-enough proportions.

Another nit to pick is the awkward position of the date, but that can only be fixed with a much smaller case (or much larger movement), both of which are not viable at this price point. 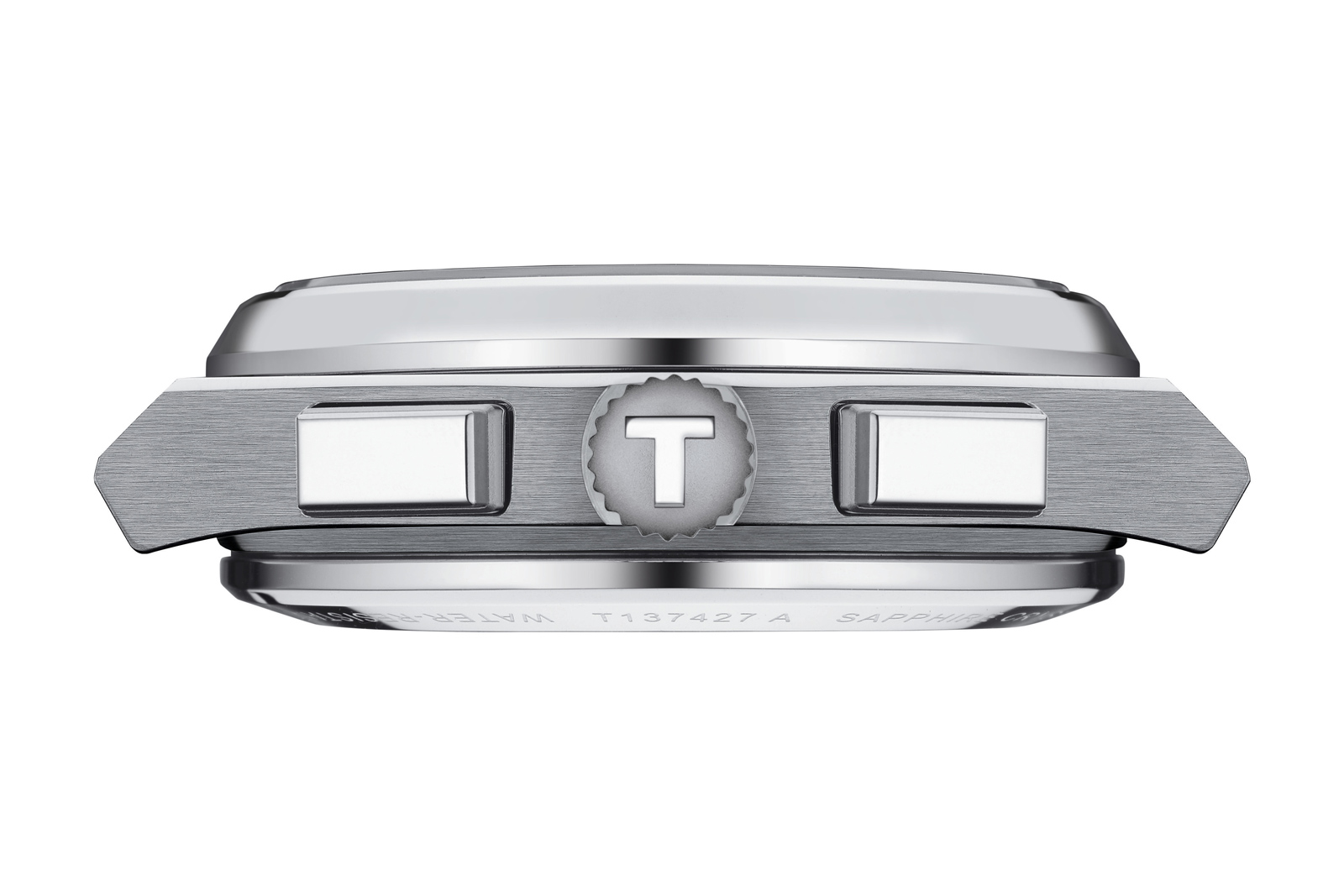 The PRX Chronograph are priced at US$1,750, which is more than twice the time-and-date PRX, but it is within the ball park for an entry-level, ETA-powered chronograph. In fact, it is relatively affordable compared to similar offerings from other brands, which makes it as much of a value proposition as its smaller brother.

Even though it was clearly conceived as a budget-minded, integrated-bracelet sports watch, the PRX Chronograph boasts several details that speak to the brand’s effort in making affordable, solid timepieces.

The dial is vertically brushed on both versions, a slightly more unusual finish than the radial, “sun-ray” brushing found on many contemporary watches (including the smaller, 35 mm PRX). But the highlight are the counters, which are recessed and bordered with a polished rim, and stamped with a concentric finish. 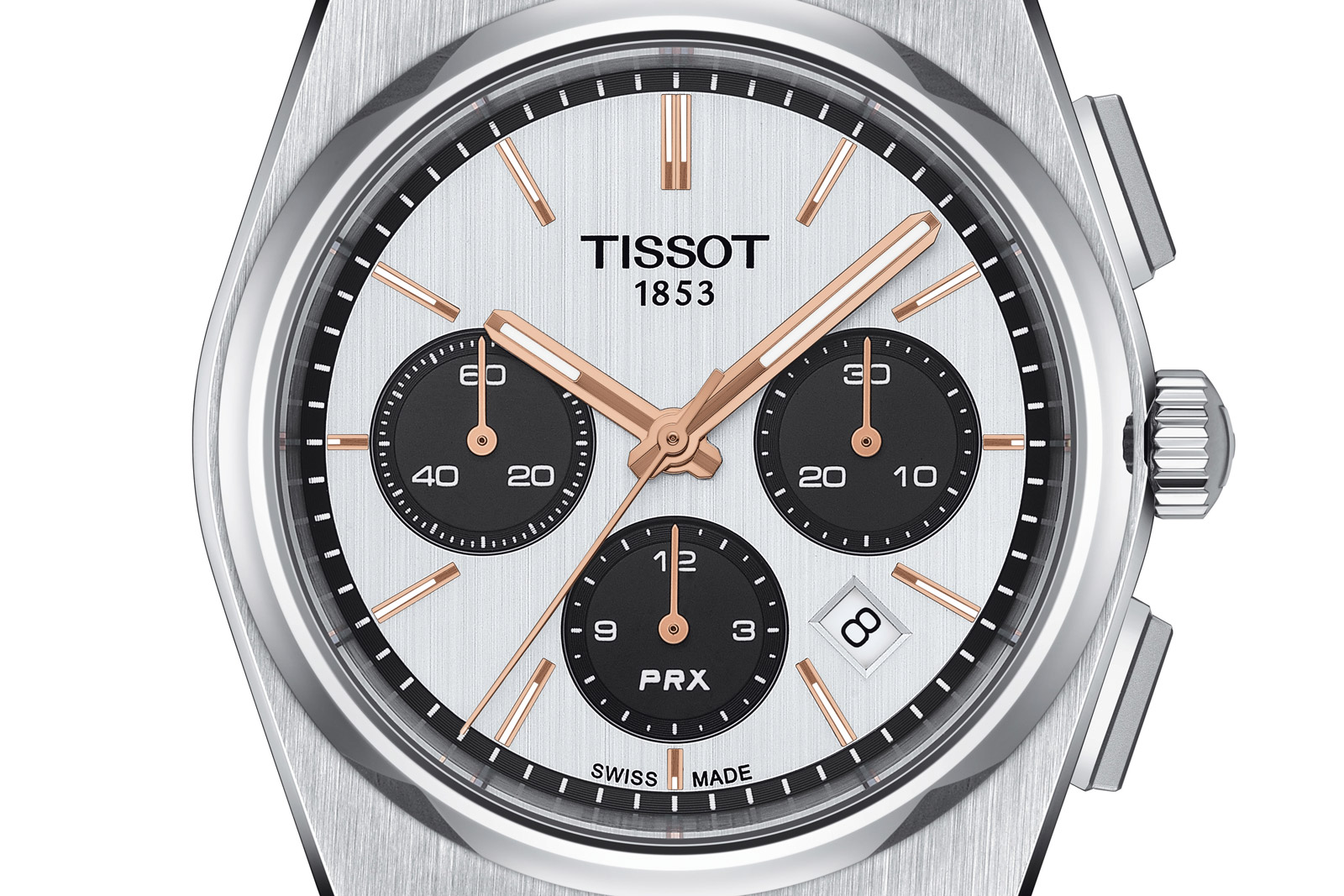 Inside the watch is the Valjoux A05 H31, which is essentially an ETA Valjoux 7753 that’s been upgraded with a power reserve that’s almost 50% longer, bringing the running time to 60 hours.

The ETA 7753 is of course based on the ubiquitous ETA 7750, except that the minute counter has been moved from 12 to three o’clock, which makes for a more classical arrangement for the sub-dials. 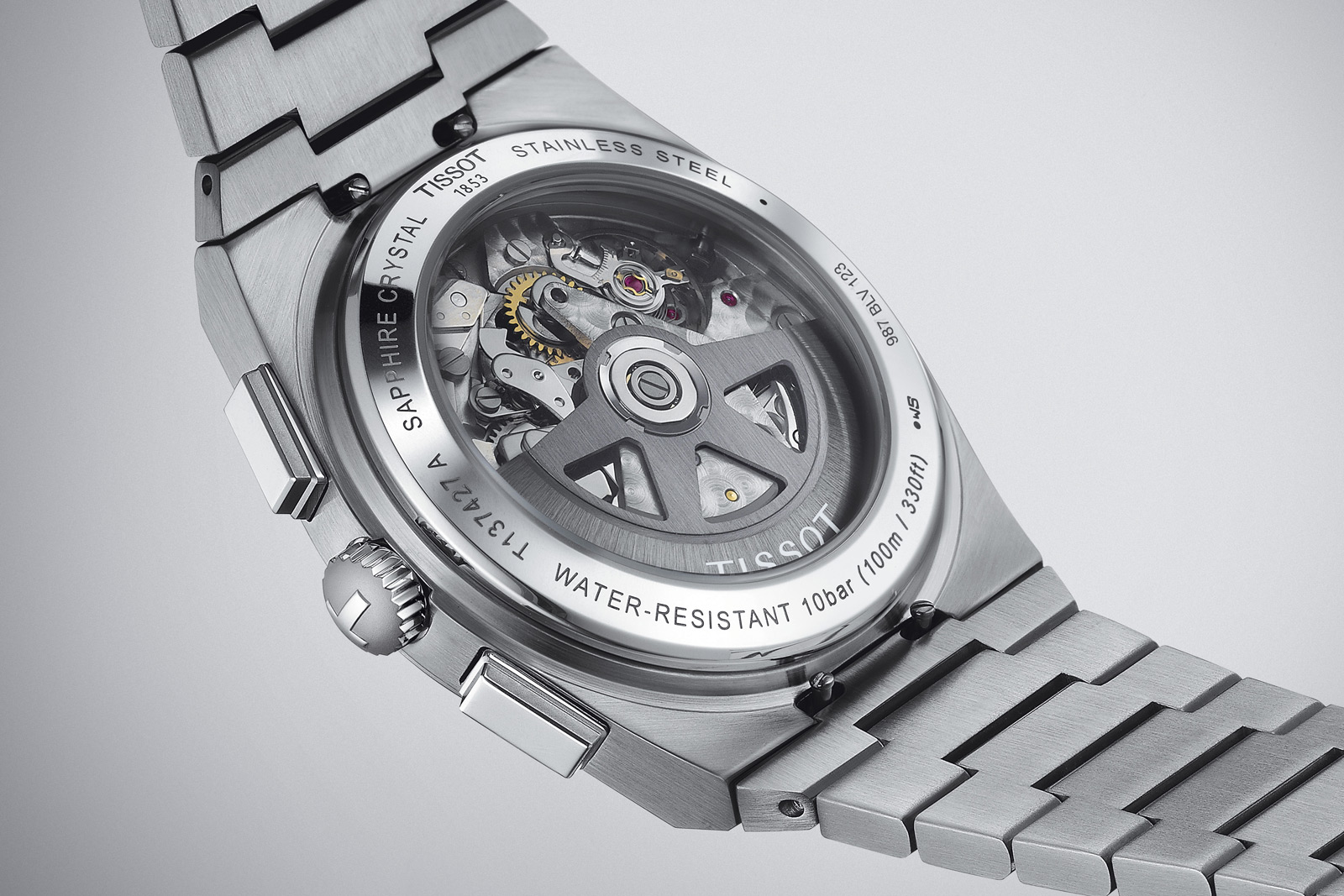 While the finishing of the movement is basic and less than attractive, the rotor is fancier and skeletonised

Availability: At boutiques and retailers
Price: US$1,750