Launched earlier this year as a follow-up to the time-only PRX, the PRX Automatic Chronograph is a natural evolution for the line-up. But unlike its little brother, the chronograph is not modelled on a vintage model, making it more creative, though it still retains the same styling as the base model. 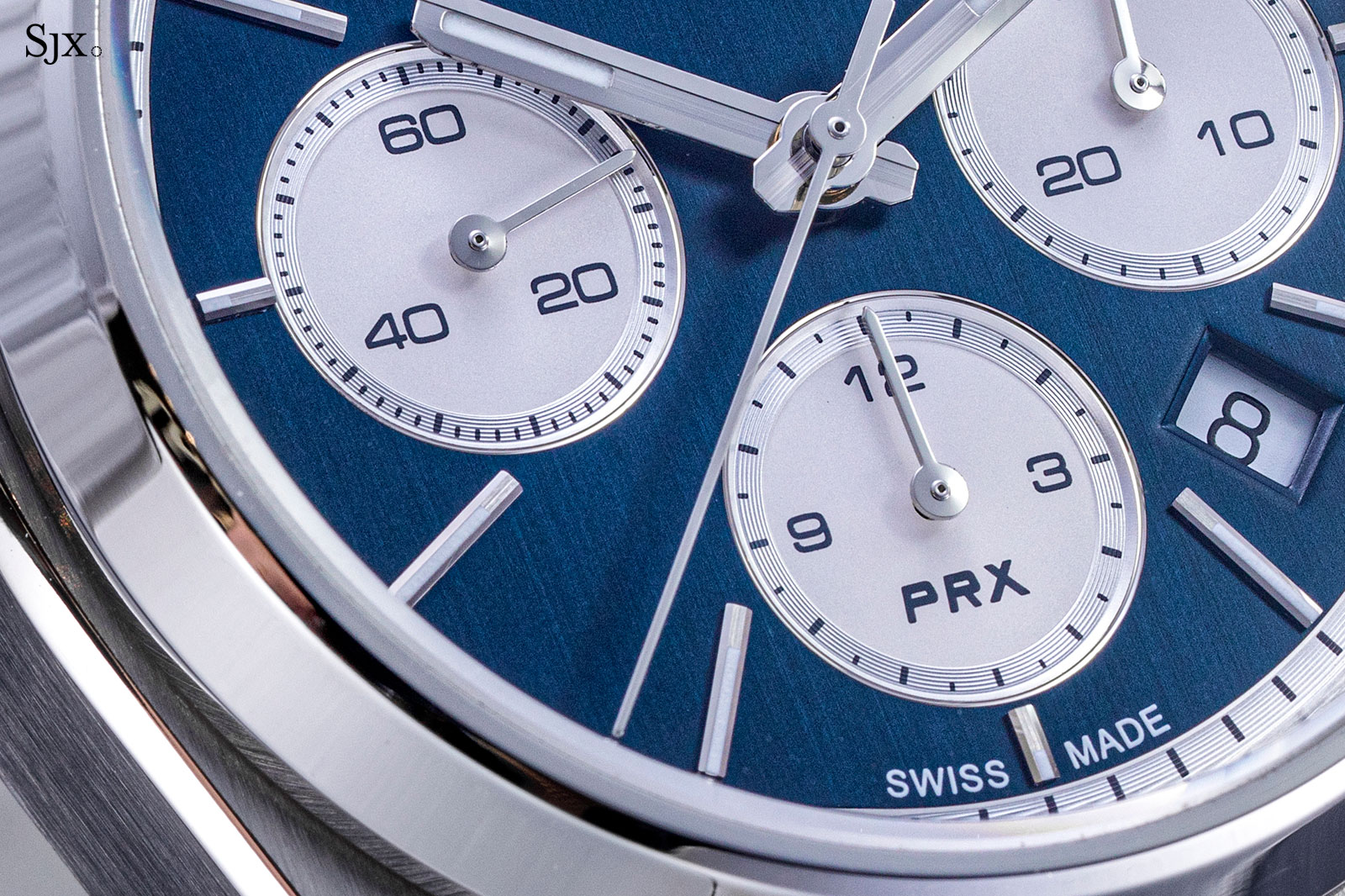 When I put the PRX Chronograph on my wrist, I instantly found it more appealing than most of Tissot’s offerings. In fact, the chronograph is even more appealing than last year’s time-only PRX. That was unexpected because the time-only model seems to do better on paper. The original PRX is smaller, thinner, plus it has a patterned dial, all desirable features in an integrated-bracelet sports watch.

But it is perhaps those very features that might seem like shortcomings – the simpler design and large size – that make the chronograph appealing. Many Tissot watches are over-designed, but despite being one of the more complicated watches in the Tissot catalogue, the PRX Chronograph is just right. Any more and it might have been too much.

At the same time, it’s exactly the size that gives the chronograph an edge over its time-only counterpart. Thanks to the tall movement, the width-to-height ratio is improved; the chronograph has sturdy and robust proportions. In contrast, the time-only model feels a little flat.

The larger case also gives the watch a solid heft in the hand, resulting in feeling of quality feel that’s arguably lacking in the time-only model – though that is just a perception, and both watches have similar build quality in reality. Other features that contribute to its appeal are only obvious upon closer inspection. They include the thoughtful details on the case, such as the chronograph pushers that are bevelled, brushed, and polished. And also polished rings around the sub-dials that add a bit of visual refinement to the face.

Though the chronograph is almost three times as expensive as the time-only PRX, it is worth the stretch, just because it feels so much better in tangible terms. It costs more, but it also feels like more.

And even at its price, the PRX Chronograph has little competition in its segment, so it still retains the excellent price-to-quality ratio of the time-only model, except at a higher price point. 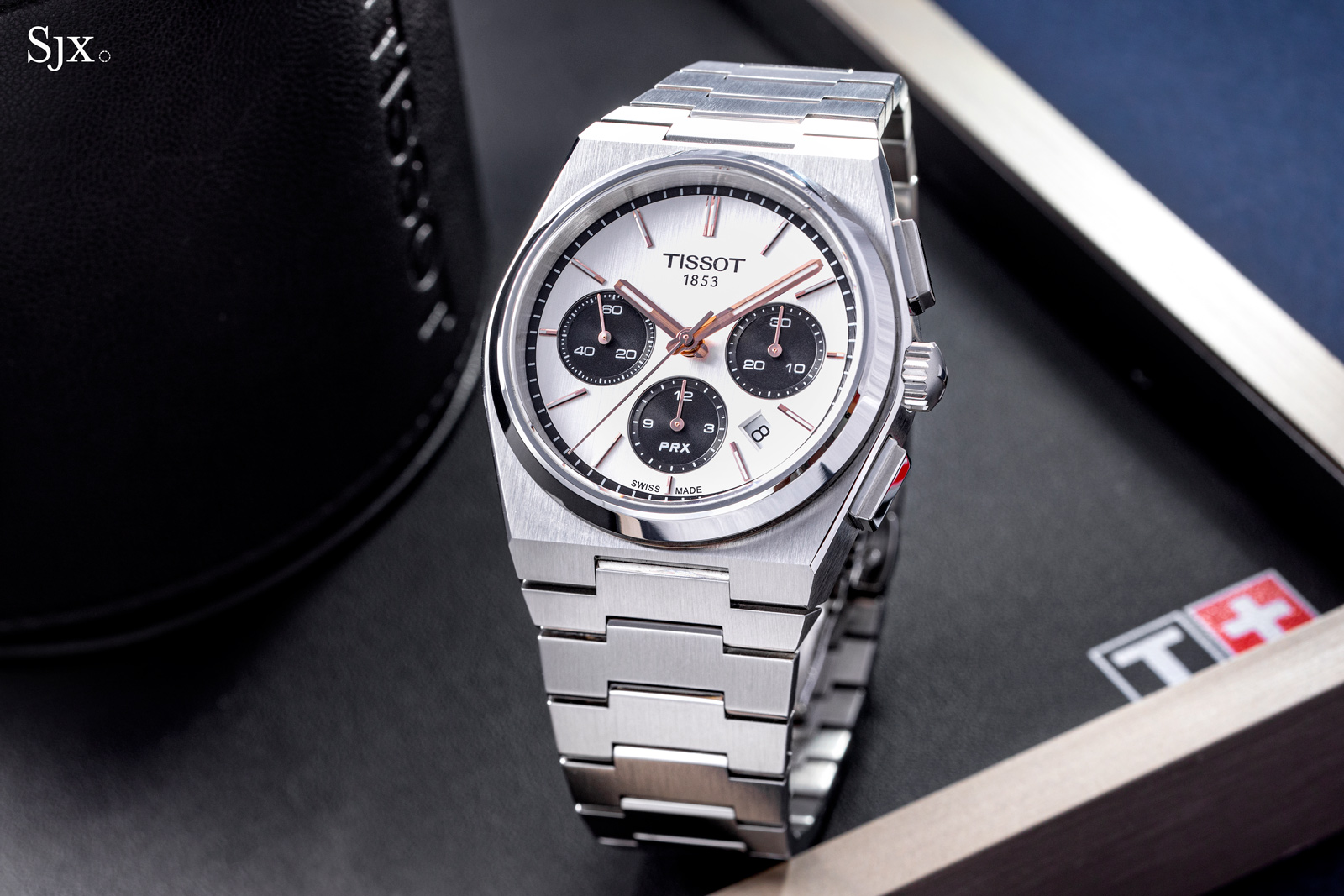 The PRX Chronograph is very much like the time-only model in terms of design, but scaled up in every respect. The case is wider and taller, while the links of the bracelet are longer and thicker to match the case. Despite the size, the PRX Chronograph wears well, thanks to the short and stubby lugs, as well as the integrated bracelet.

Scaling up a design can easily go wrong, especially one of that is vintage inspired. Done poorly and the result will look neither modern nor vintage, but instead just unconvincing. But the 42 mm case of the PRX Chronograph is a success, perhaps the best in the whole PRX collection, which includes time-only versions in 35 mm and 40 mm. 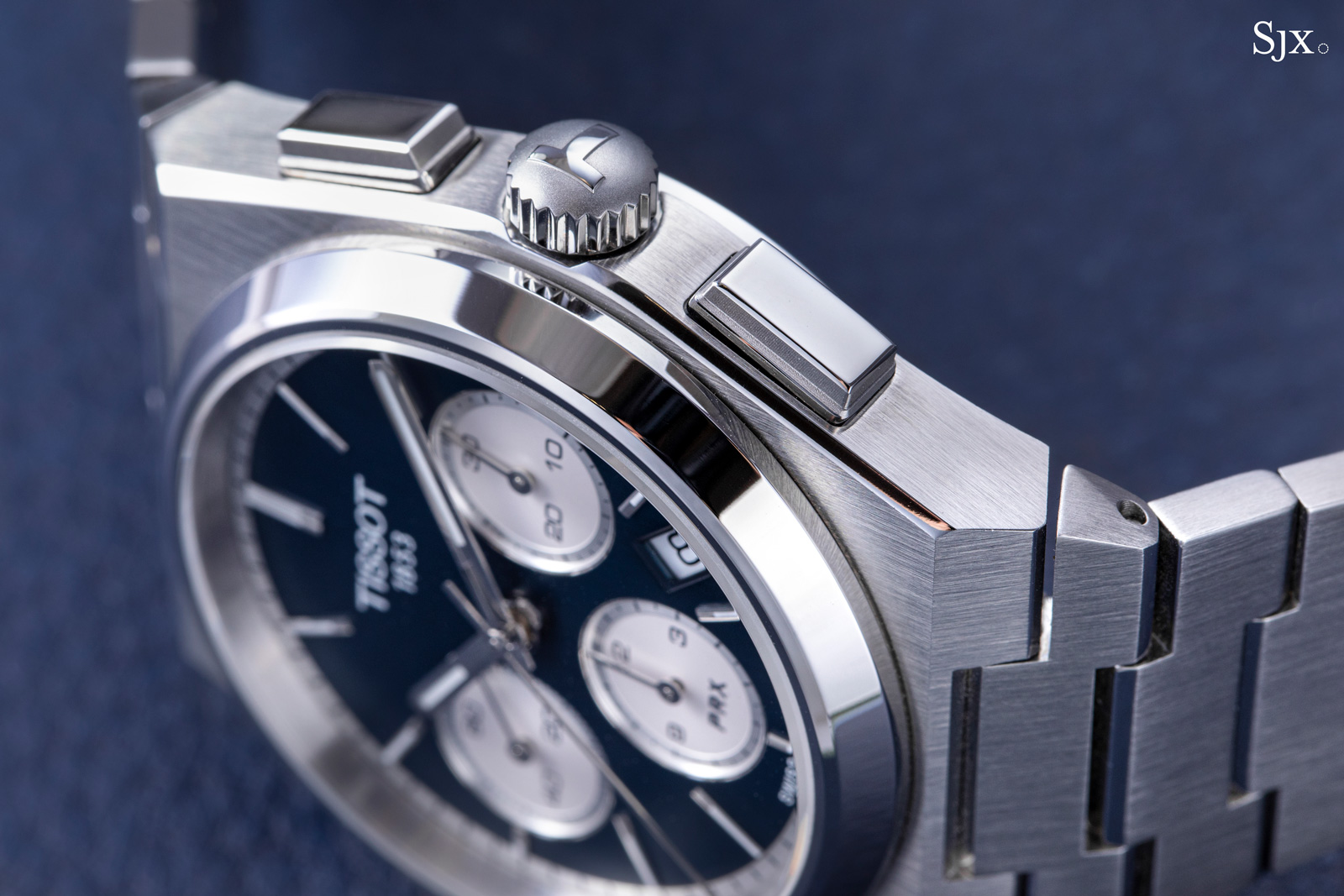 The PRX Chronograph demonstrates that wearability doesn’t only depend on case width or thickness, but a combination of factors. One is the aspect ratio – the proportion of width-to-thickness – which is well balanced in the PRX Chronograph.

The bigger case and resulting weight gives it a feeling of value, but it is probably a feeling that is unique to the chronograph. The 42 mm case would certainly look out of place on the time-only model, which will probably seem unnecessarily bulky with an overly empty dial. On the chronograph the dial is filled up with triple registers that create a busy, instrument-like look perfectly suited to the large case. 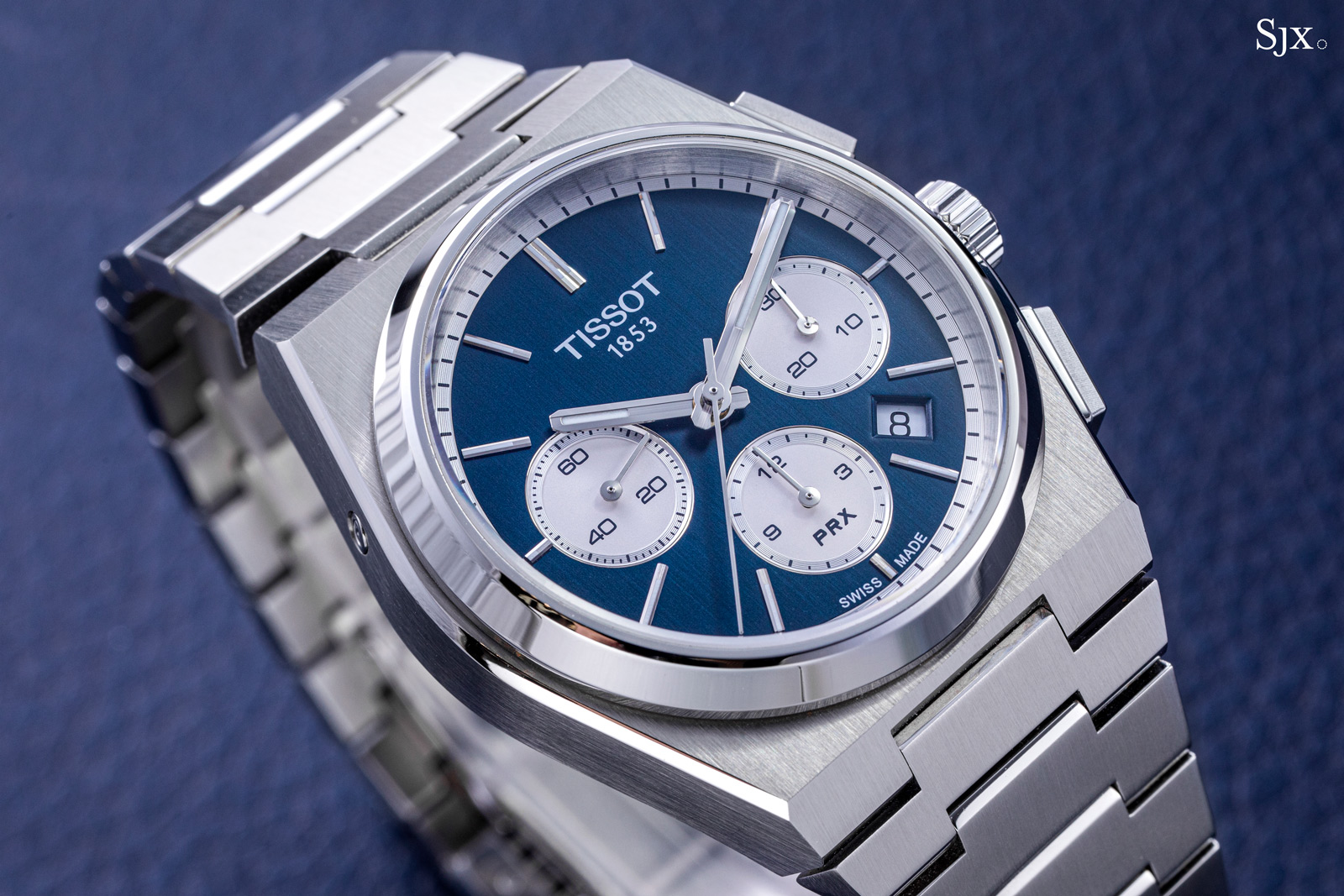 While the case is undoubtedly thick – 14.5 mm high – it doesn’t feel that thick, even when viewed from the side. That’s because of a smartly designed profile that accommodates much of the height in the bezel and case back. In fact, bezel is so tall that it’s almost the same height as the case middle. As a result, the thin case middle creates the impression of a thinner case.

The tall bezel is one of the few features that are lacking in the PRX Chronograph. It is steeply sloped and finished in a rudimentary manner. The quality of finish is good enough given the price, but the width of the bezel makes it obvious. 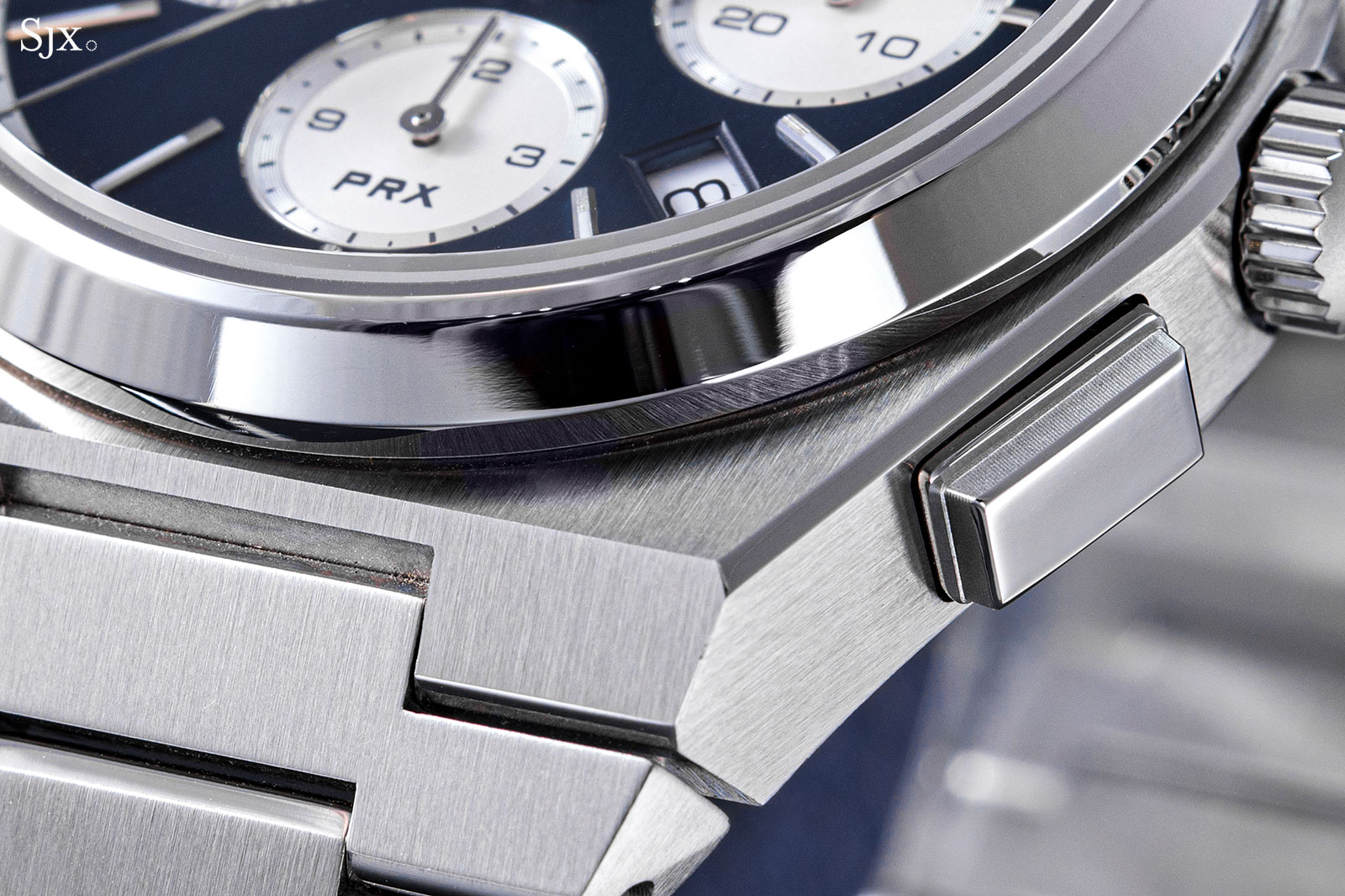 In contrast, the brushed surfaces is better finished, probably because linear brushing is easier to do well than mirror finishing. All of the matte surfaces are neatly finished and also flat, which means the case was most likely milled rather than stamped.

Another highlight of the case are the pushers, which have a surprisingly level of detail. Although the quality of finishing is basic, it is still surprisingly elaborate. The pushers sport vertical milling lines on their sides

Overall, the quality of the case is excellent for the price. The bracelet, on the other hand, is merely good enough. It’s certainly improved over that in the time-only mode, but not executed to the same standard the case. This is especially evident on the reverse side of the bracelet links.

Still, the PRX Chronograph as a whole feels good on the wrist, and that is what matters. Though the PRX Chronograph lacks the waffle-pattern dial of the time-only model, it more than makes up for that with other details that stem from the chronograph function, namely the registers.

The chronograph registers are ringed by a polished border and slightly recessed, while the scales are stamped with a fine concentric pattern that contrasts with the lightly grained centre. All three elements of the register – border, scale, and centre – are on different levels, so they give the dial some depth. The rest of the dial is simply but neatly finished. The applied markers, for instance, are three dimensional and decorated with brushing and polishing.

Both versions of the PRX Chronograph have a simple vertical brushing on the dial that is distinct yet fine. Most dials are typically brushed in a radial manner, so the vertical brushing here makes it slightly different. That said, the brushed finishing is more obvious on the silver dial; on the blue dial it is barely apparent at a distance. Less attractive, however, is the printing on the dial. The typography is simplistic and the font size too big

Another element that can be improved is the date, which looks awkward as it sits closer to the registers than the edge of the dial.

I do appreciate the date for its functionality and also as a design element – it helps fill up the dial. But I also wish it was better positioned, which is admittedly a challenge.

The position of the date can’t be changed while retaining the current case and movement, so the only solution would have been to integrate it into the six o’clock register. That would have camouflaged the date and also created a more symmetrical dial. The see-though back reveals the Valjoux A05 H31, essentially an ETA Valjoux 7753 that’s been upgraded to have a longer power reserve of 60 hours, a 50% increase over the stock version of the calibre that has a power reserve of 42 hours. The bracelet is equipped with twin tabs as a quick-release mechanism, which implies straps will eventually be available

Unlike most upgraded ETA movements that have a silicon hairspring and reduce frequency, the A05 H31 retains a standard hairspring and a high frequency of 28,800 vibrations per hour, or 4 Hz. That implies the longer power reserved is the result of a new mainspring alloy or optimisation of the barrel and going train, or a combination of the two.

While upgraded, the A05 H31 still retains many of the features of the stock movement. So it has a standard smooth balance and Etachron regulator index instead of the fairly advanced free-sprung balance found in the Powermatic 80.111 of time-only PRX.

But considering the proven reliability of the Valjoux chronograph movement, retaining most of its original features is probably a good thing. One of the biggest functional shortcomings of the PRX Chronograph is a result of the movement inside – it has no quick-set date.

But the 7753 has its minute register repositioned from 12 to three o’clock, so it loses the quick-set mechanism since the real estate there is now occupied by the register.

Instead, the 7753 has a recessed pusher at 10 o’clock that advances the date. That means a stylus is needed to operate the pusher and also means the case loses its sleek lines. Date aside, the movement also falls short in terms of visual appeal. The finishing is basic at best and would have been better hidden behind a solid back.

In fact, the simpler movement in the time-only PRX was plain but neater. Here the bridges are finished with widely-spaced and somewhat uneven perlage, while the time-only model has a simple, blasted finish that is equally industrial but cleaner. The PRX Chronograph is an example of a successful redesign, one that scales up and improves on an original. The vintage-inspired designs is appealing, as is the solid construction and thoughtful details. Availability: At boutiques and retailers
Price: US$1,750, or 2,550 Singapore dollars