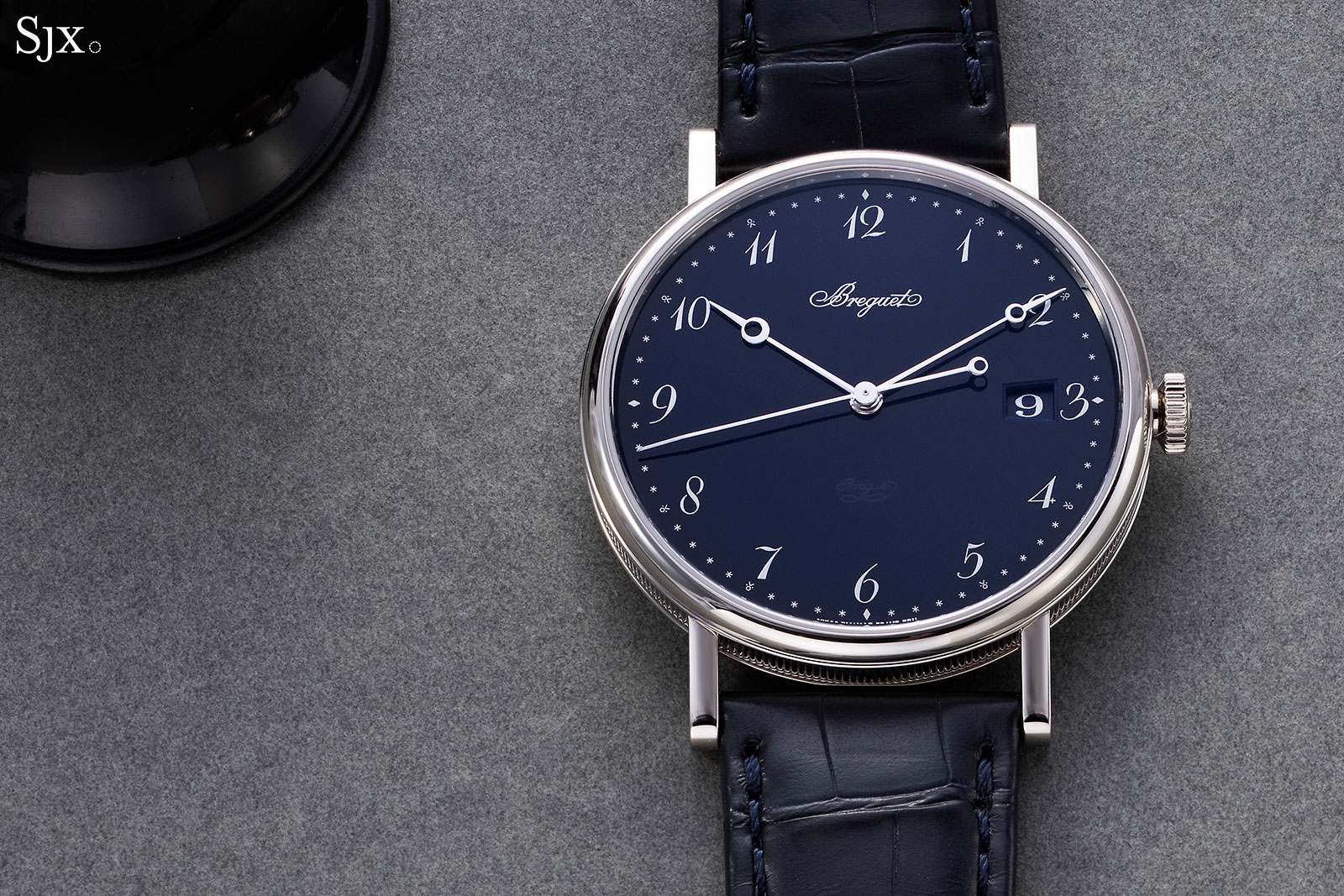 Breguet is often at its best when it does traditionally styled watches with a twist, something exemplified by the Classique 5175 limited edition made for its Tokyo boutique in 2017. The design was classical, but the dial was blue enamel, instead of the usual white (or occasionally, black). This year Breguet revived the same look – albeit with a date window – for the new Classique 5177, once again in blue enamel.

A longstanding model in the catalogue, the Classique 5177 was launched in 2006, but in more traditional livery – white enamel, or guilloche in either basketweave or hobnail. The latest iteration, however, is the most striking of the lot, managing to be both traditional and different. 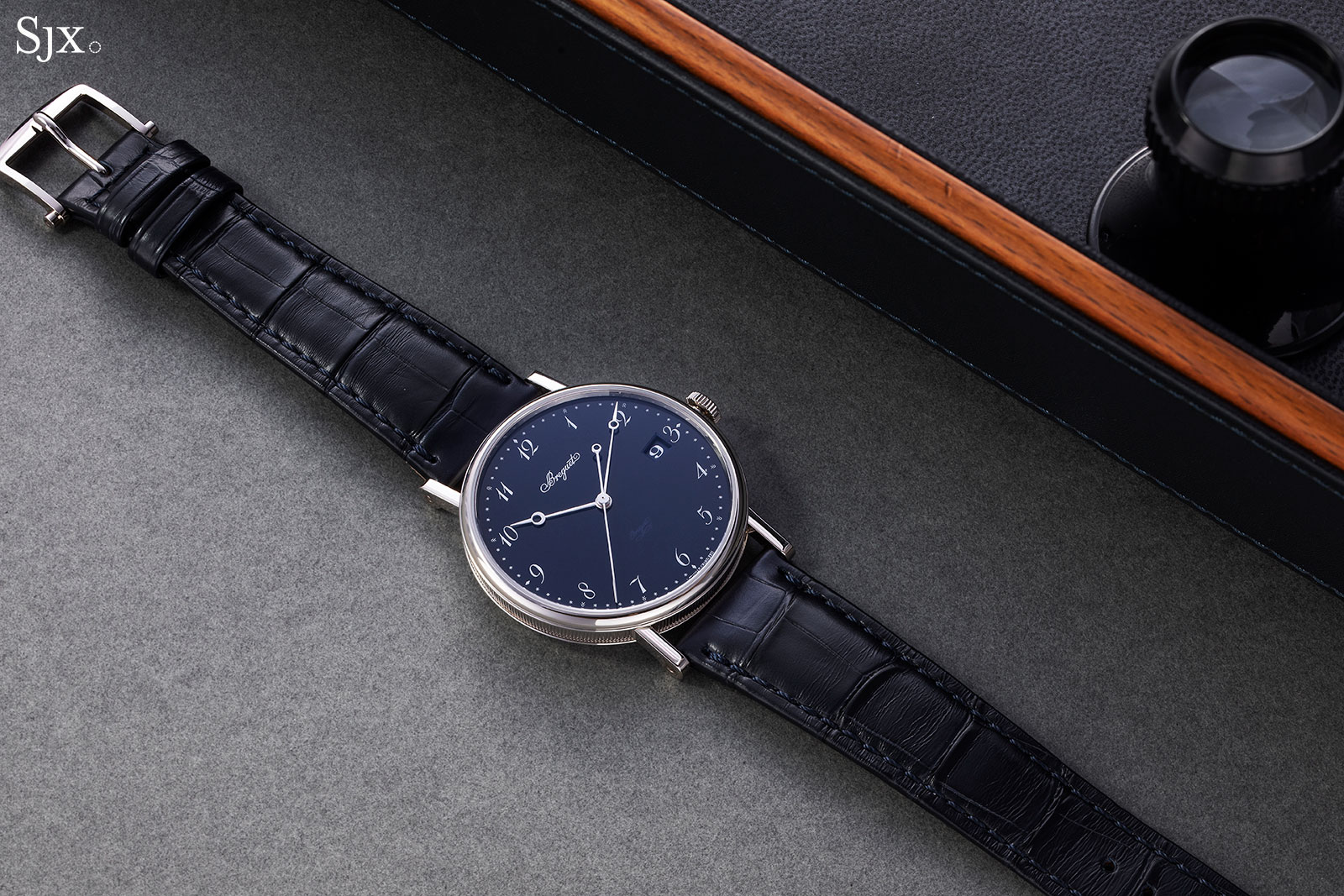 At 38mm by 8.8mm, the case is perfectly proportioned as a modern dress watch; not too big and not too small. Like all Breguet watches it has long, narrow lugs, which give it a slightly larger footprint than its dimensions imply.

On the wrist the watch sits graceful and flat, proportions that give it a look of proper formality, especially when combined with its restrained design. 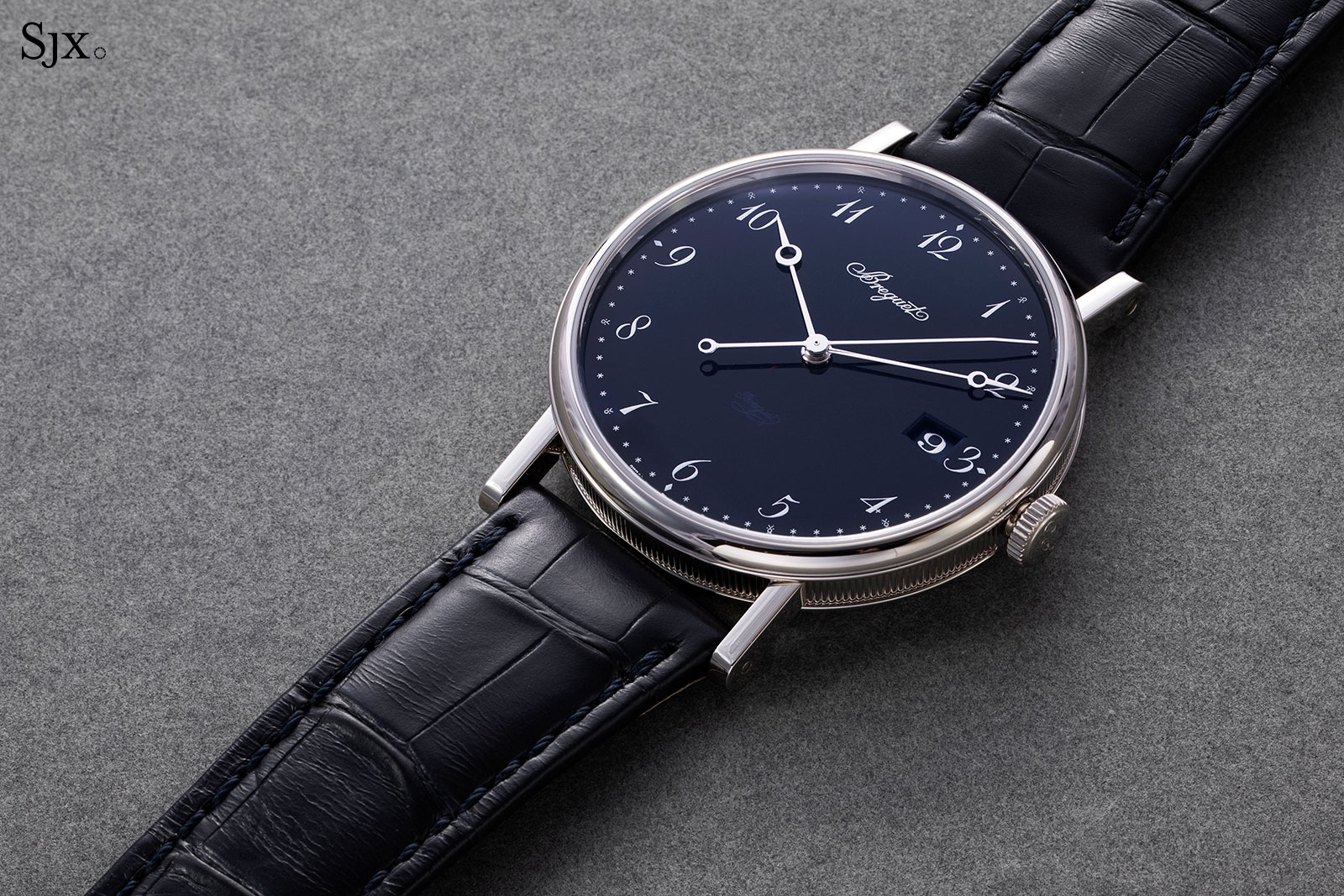 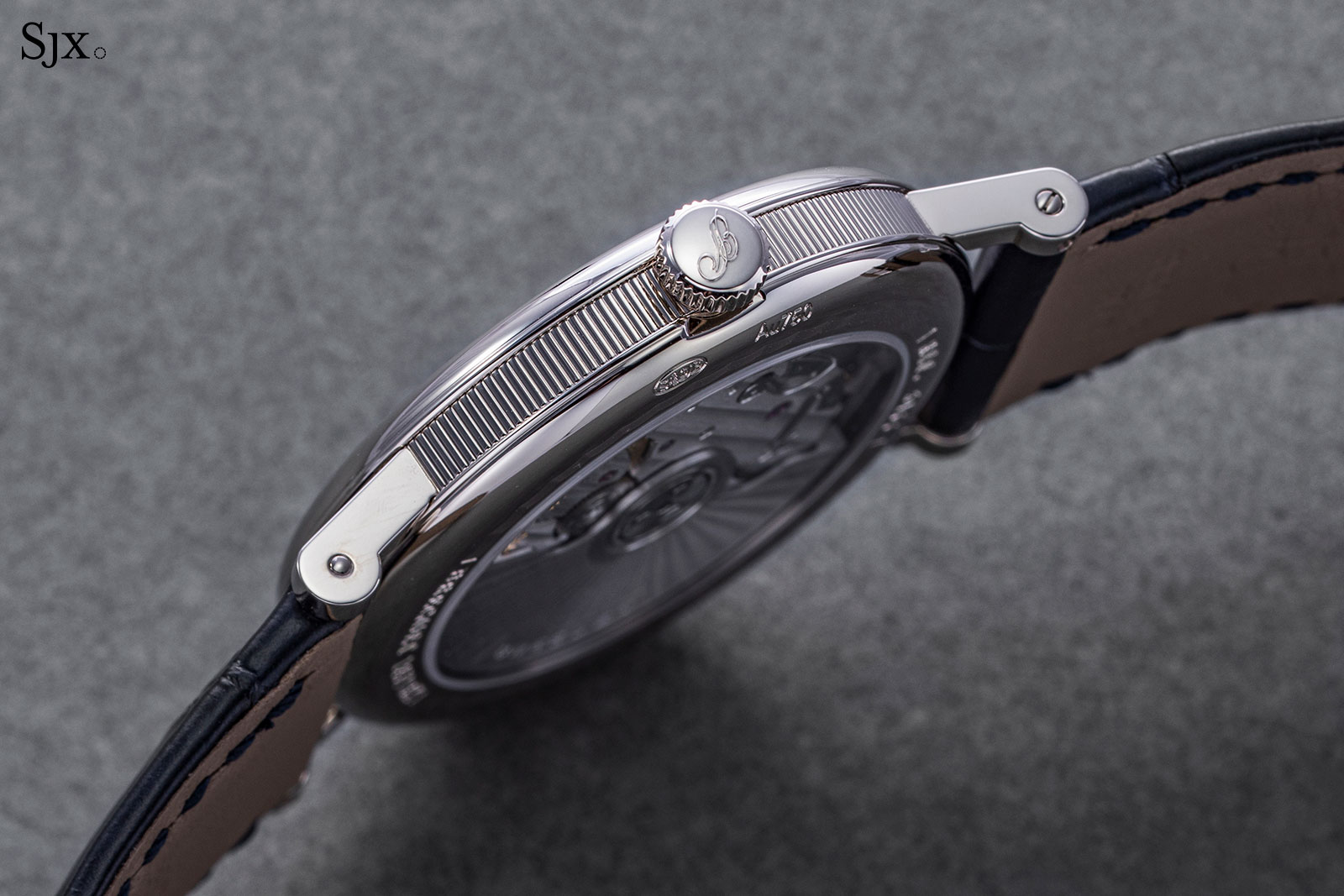 The profile of the traditional Breguet watch case, with a fluted case band and soldered lugs

All the details of the new 5177 are old school, inspired by 19th century Breguet pocket watches. The obvious ones are the Breguet-style numerals and hands, while the less obvious, and more charming, elements include the star-shaped minute markers and the Breguet “secret” signature above six o’clock.

Only faintly visible, the small “secret signature” was devised by Abraham-Louis Breguet as a means of combating counterfeits, which were numerous at the time because of Breguet’s immense success. Now the “secret” signature is lightly etched by laser on modern Breguet watches, and found on both enamel and guilloche dials.

The hands are the usual pomme hands found on Breguet watches since time immemorial, with an especially long counterweight on the opposite end of the seconds hand, giving it a more elegant air. Up close the hands are flat and highly polished; the finish of the hands is sufficient for such a watch, and on par with its peers. Thicker, rounded hands, however, would have really taken it to the next level, but such hands have to be hand made, and are today only found on watches made by a handful of independent watchmakers like Moritz Grossmann. 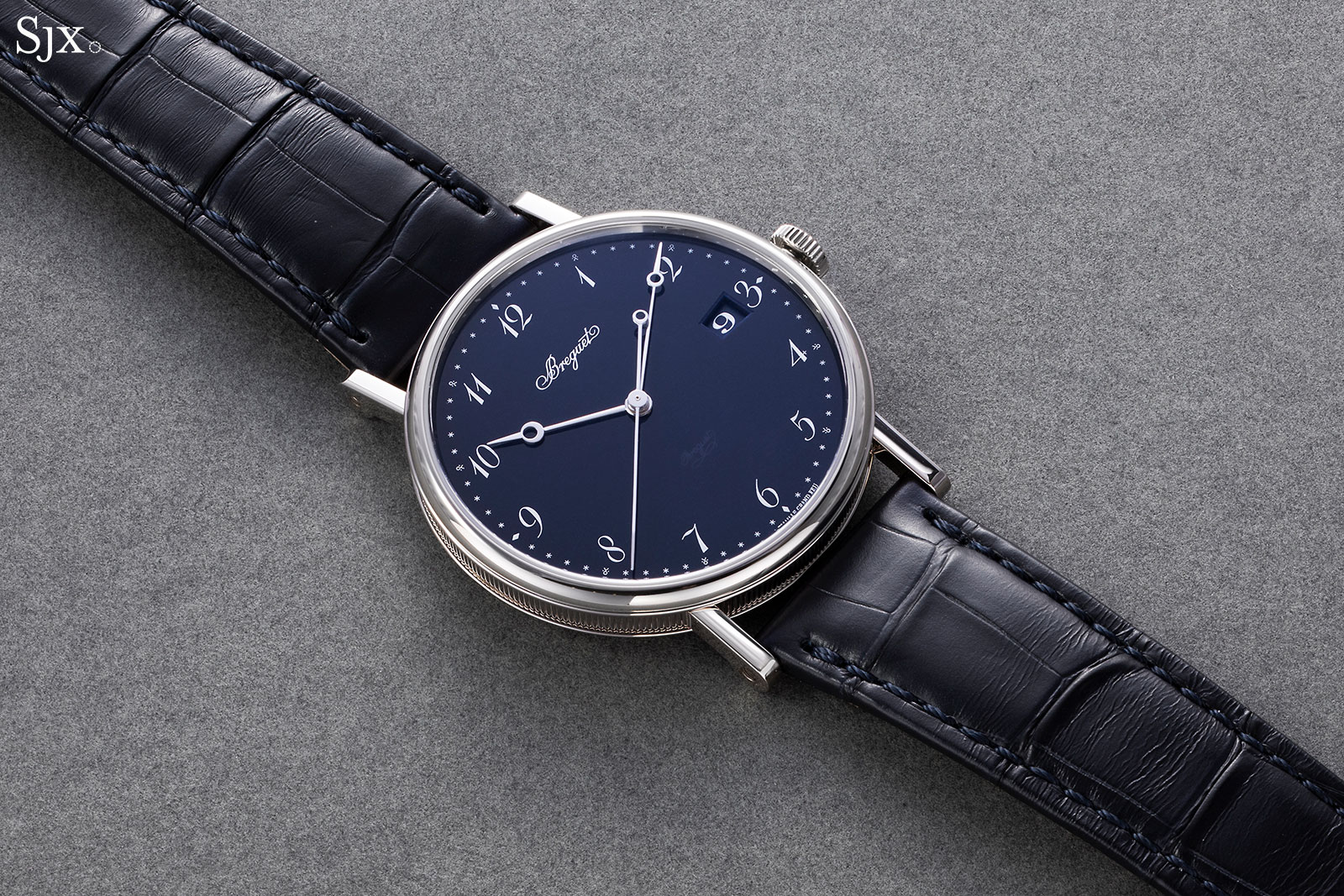 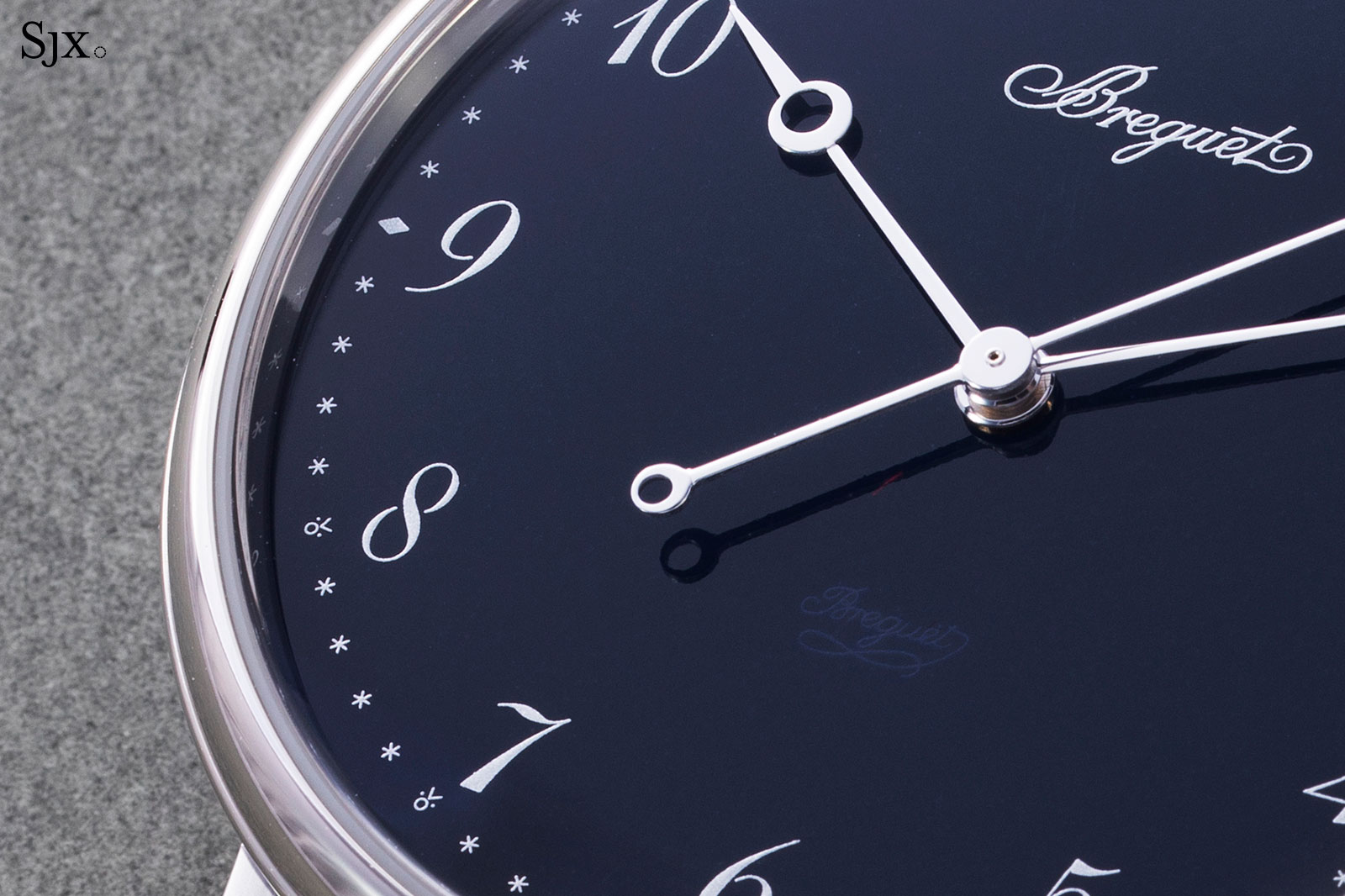 The “secret” signature is faintly visible just below the hands 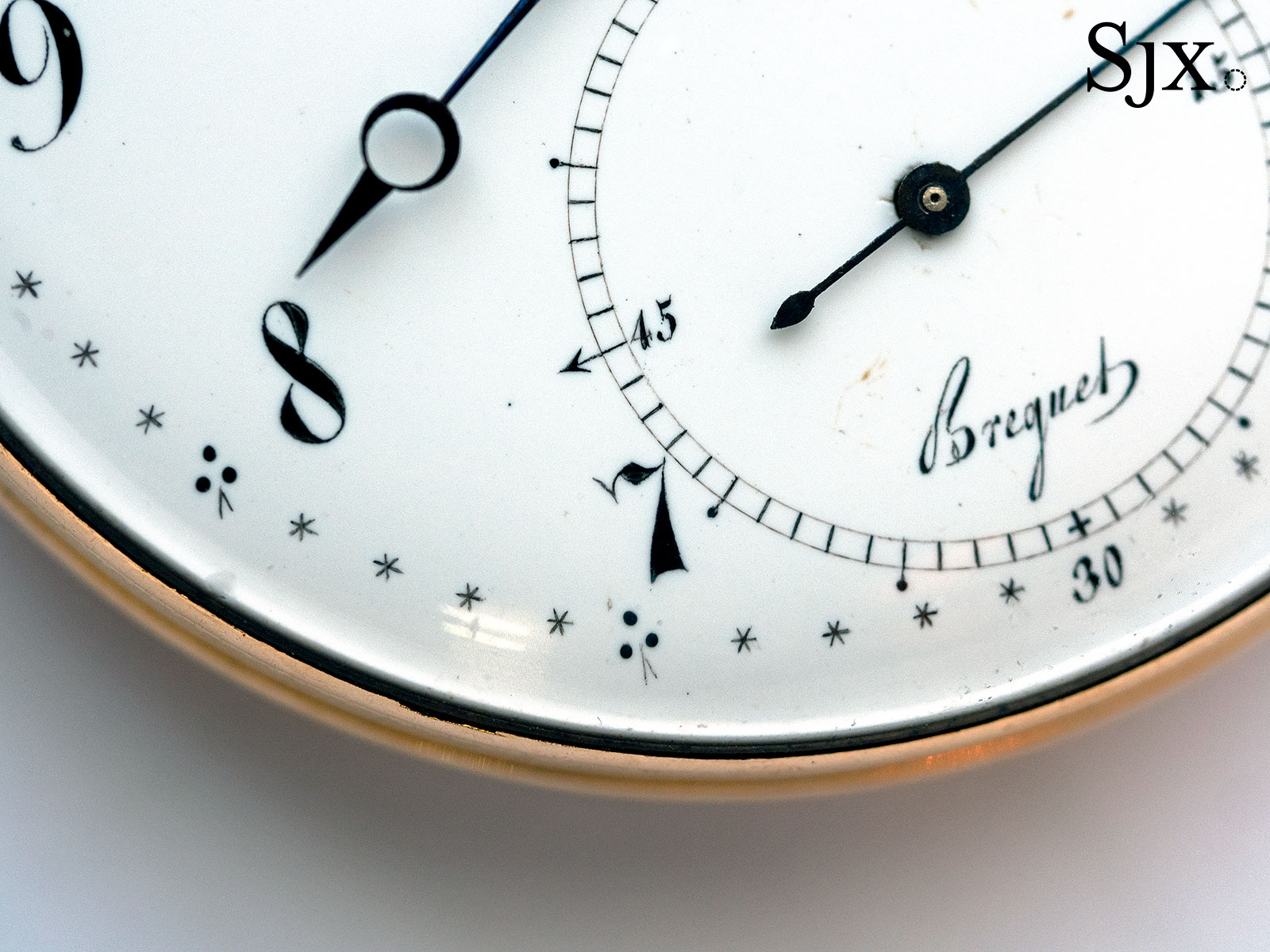 And the historical inspiration: the dial on Breguet no. 9, a perpetuelle pocket watch completed in 1791

Nothing about the design is surprising – it is quintessential Breguet, which is a good thing – but the colour scheme is unconventional and appealing. Instead of the common enamel colours, the dial is dark blue, with the markings done in granular, powdered silver paint, matched with rhodium-plated hands, creating a clean, serene look. 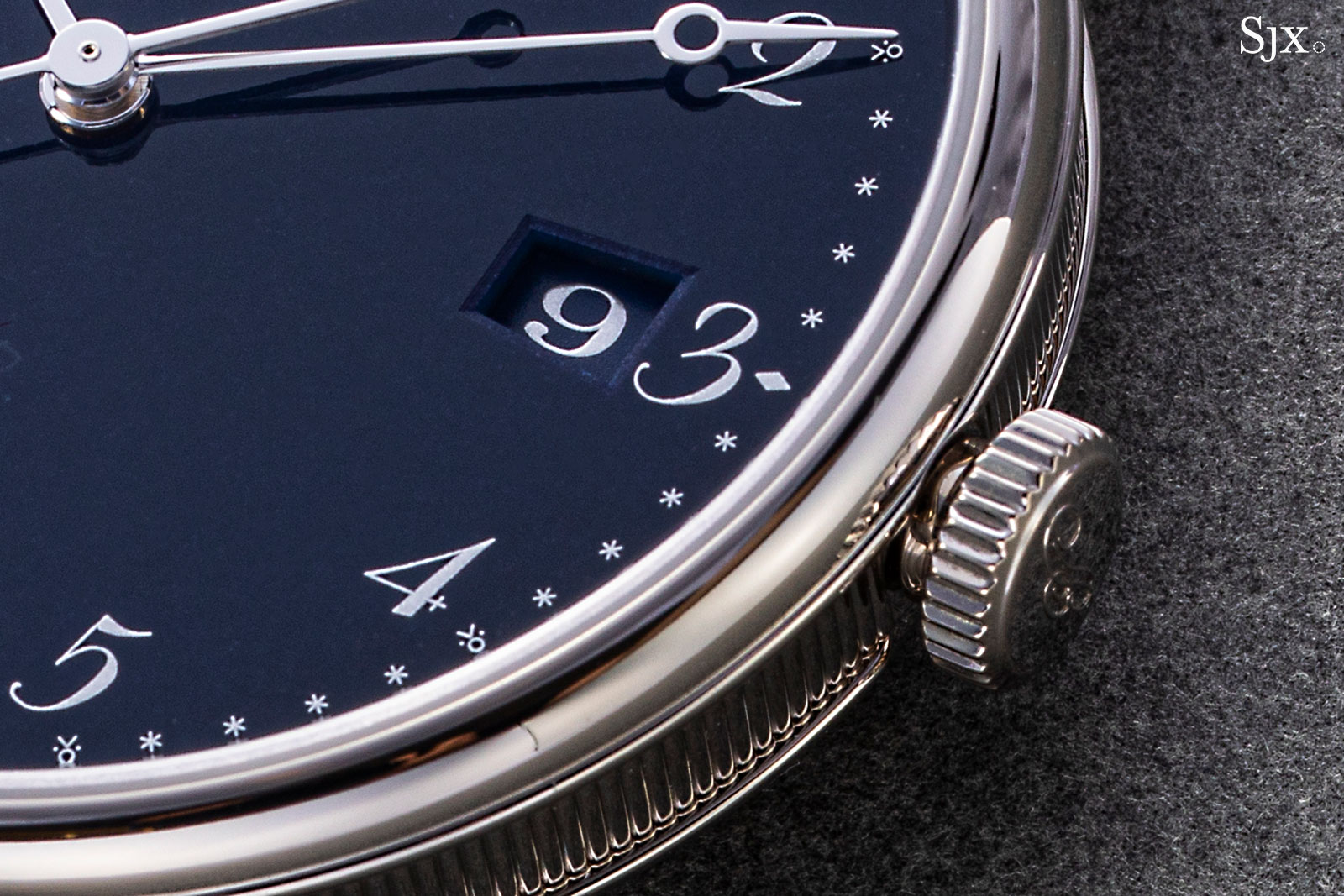 Some of that serenity is interrupted by the date window. In its favour, the date disc is the same colour as the dial, with date numerals that are identical in colour to the hour markers, and even in similar typography. As a result, it is not as prominent as the date on other versions of the 5177, but it still gets in the way of the dial aesthetic. Up close the vitreous enamel dial is smooth, glossy and consistent in colour, with few of the imperfections found on enamel dials. Its quality is illustrated by how the hands reflect perfectly on the dial surface.

But Breguet, along with its sister brands Blancpain and Jaquet Droz, has the advantage of a modern technique for producing enamel dials. The enamel is applied on a ceramic disc with metal backing (as compared to the traditional method of enamel on metal), which reduces defects, like warping for instance, when the enamel is fired in an oven.

Like many of the dials used by the high-end brands of the Swatch Group, this enamel dial is probably produced by Rubattel et Weyermann, a dial maker in La Chaux-de-Fonds that the Swatch Group acquired in 2002. 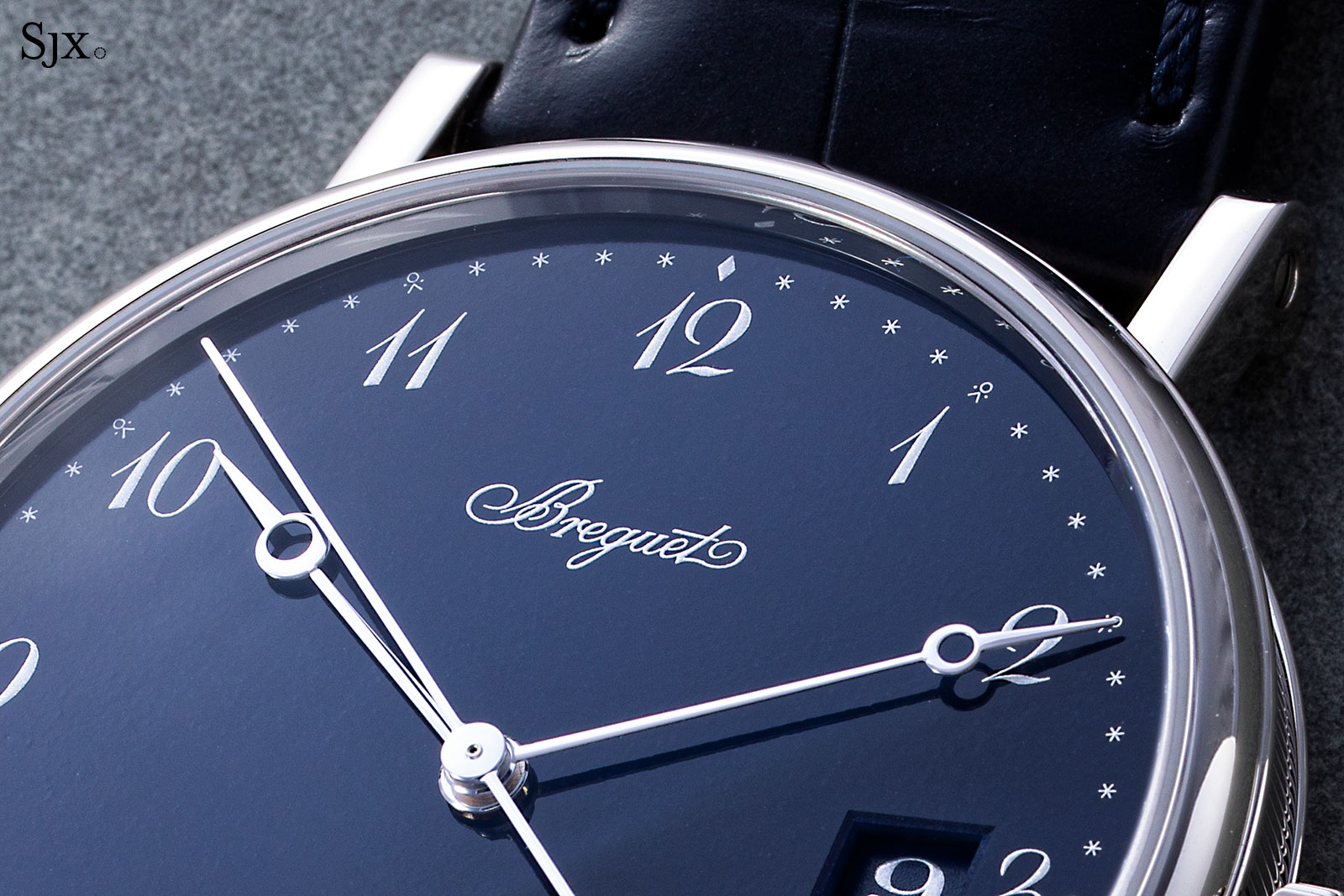 Inside the Classique 5177 is the cal. 777Q, which is the same movement found in the model since it was first launched. Despite being a relatively straightforward automatic calibre, it is attractively constructed and finished – done well enough, in fact, that is is one of the better movements in its segment. The cal. 777Q is notable for being the first Breguet movement to feature silicon components, alongside the cal. 591A unveiled the same year. Both movements were launched in 2006, inside the Classique 5177 and Classique 5197 respectively.

But while the cal. 591A was derived from the decades-old Lemania 8810 (itself based on the Longines 990 of 1977), the cal. 777Q was a newly developed movement, a fact that is obvious in its more elaborate construction as well as longer power reserve of 55 hours (compared to 38 hours for the cal. 591A).

At a distance the cal. 777Q looks like many other Breguet movements, with the view dominated by a full rotor made of 22k gold decorated with guilloche. But up close it reveals several appealingly details, including bridges shaped to emphasise bevelled edges as well as two elongated springs for the winding mechanism. 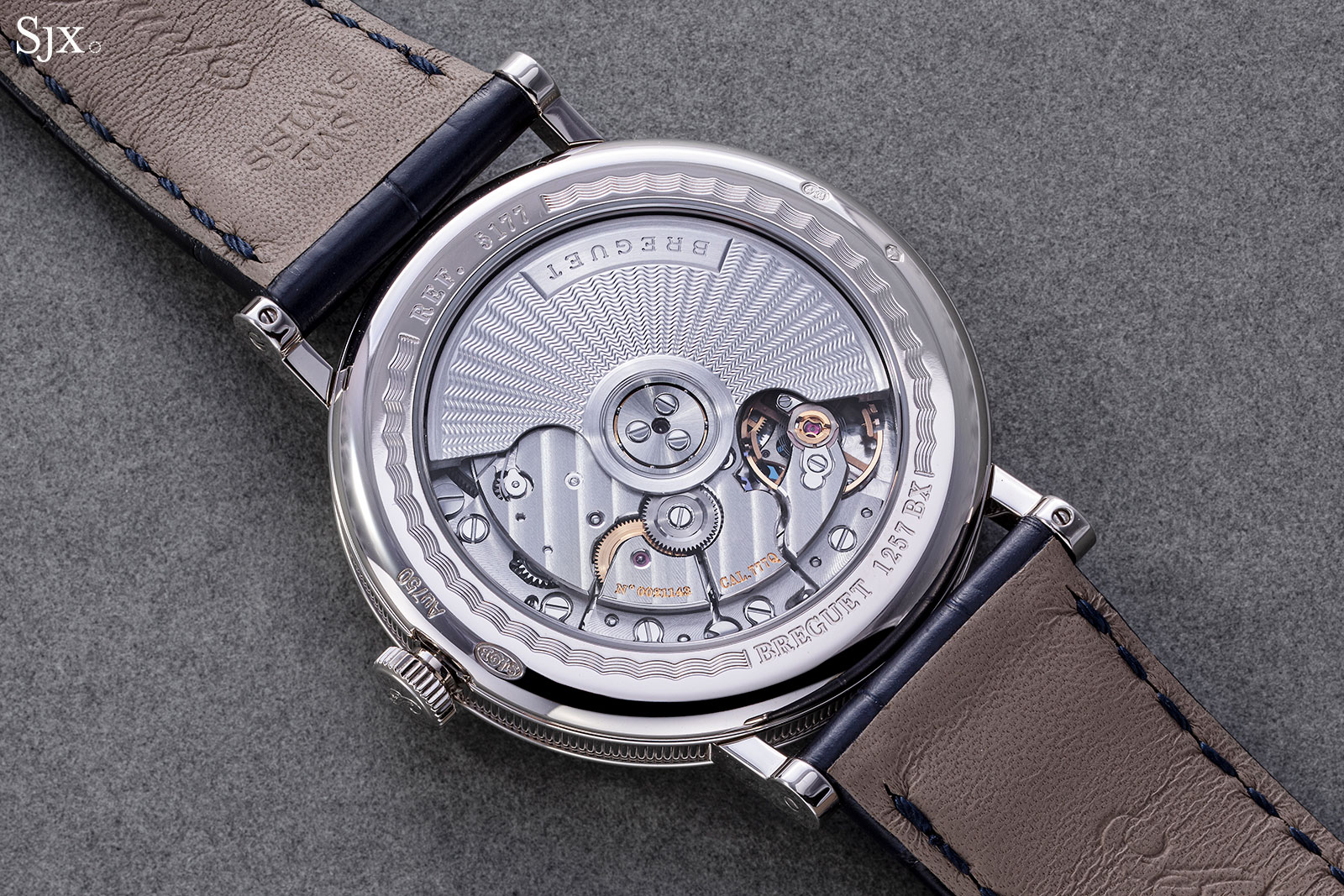 The rotor is white gold to match the case The springs for the winding mechanism, with the single barrel visible below: one is a winding click spring for the barrel ratchet wheel, while the other engages the crown winding wheel

One of the most attractive details are the two inward angles found on the going train bridge, right next to the balance wheel, which reveal the degree of hand finishing on the movement. 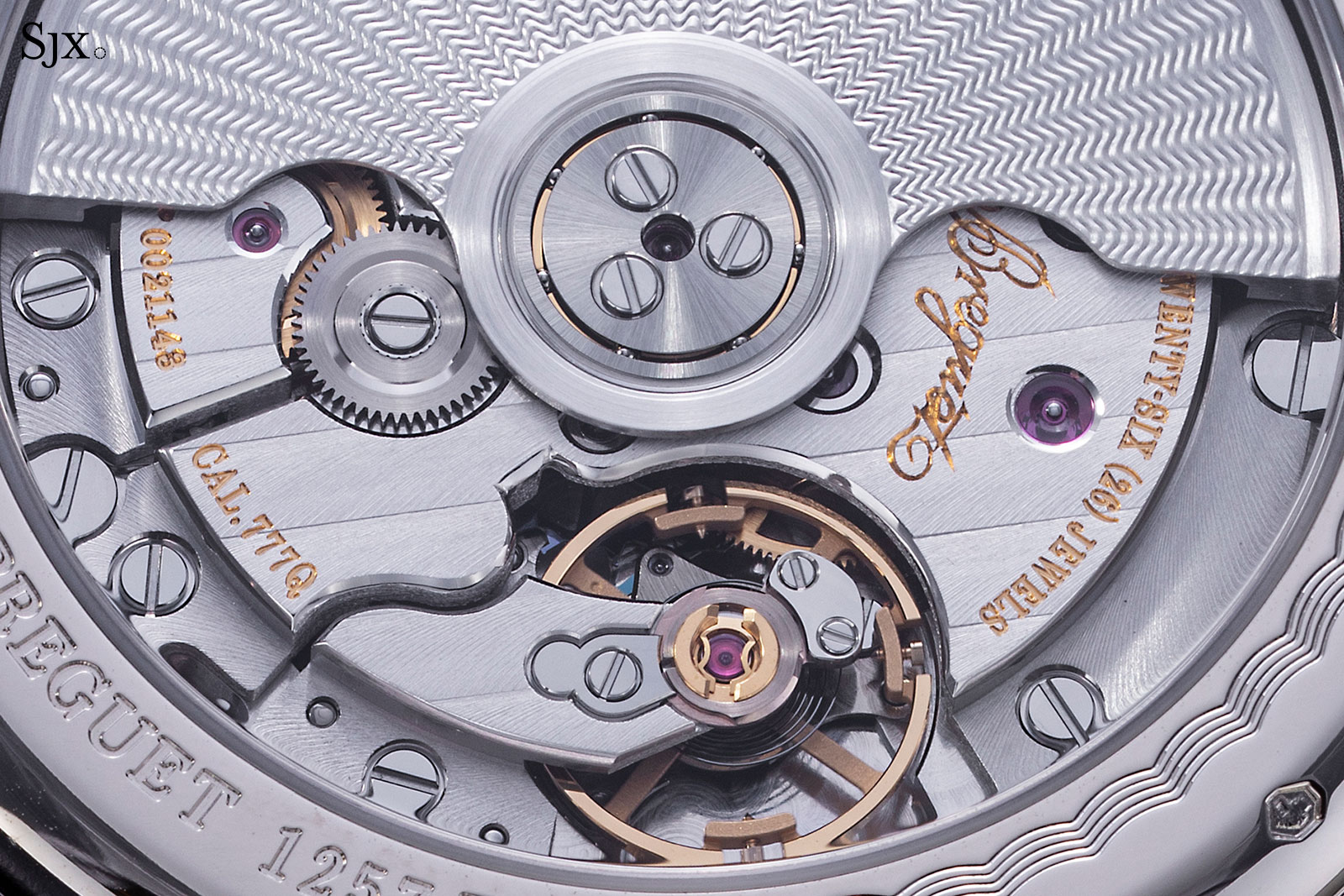 Like many other current Breguet movements – including those in top-of-the-line models like the new 5395 skeleton tourbillon – the cal. 777Q has a silicon escapement. The escape wheel and pallet fork are in silicon, although the pallet jewels are traditional rubies.

While the silicon parts no doubt confer performance advantages on the movement, primarily in terms of greater efficiency due to the light weight and negligible friction, they feel a bit too high tech compared to the rest of the movement, which is still quite traditional.

The Classique 5177 is a beautiful in both finish and design, possessed of the quintessential Breguet style, but being slightly more contemporary because of its unusual blue enamel dial. Even though the date window does look out of place, and I do wish it wasn’t there, it doesn’t detract from the quality of the watch.

And for what it costs, just under US$24,000, the 5177 is competitively priced against the competition, essentially because it has higher specs for the same price. Comparable watches by Vacheron Constantin, for instance, cost about the same, but do not have an enamel dial. In short, the Classique 5177 is one of the most compelling buys in its class. Availability: At Breguet boutiques and authorised retailers
Price: US$23,700