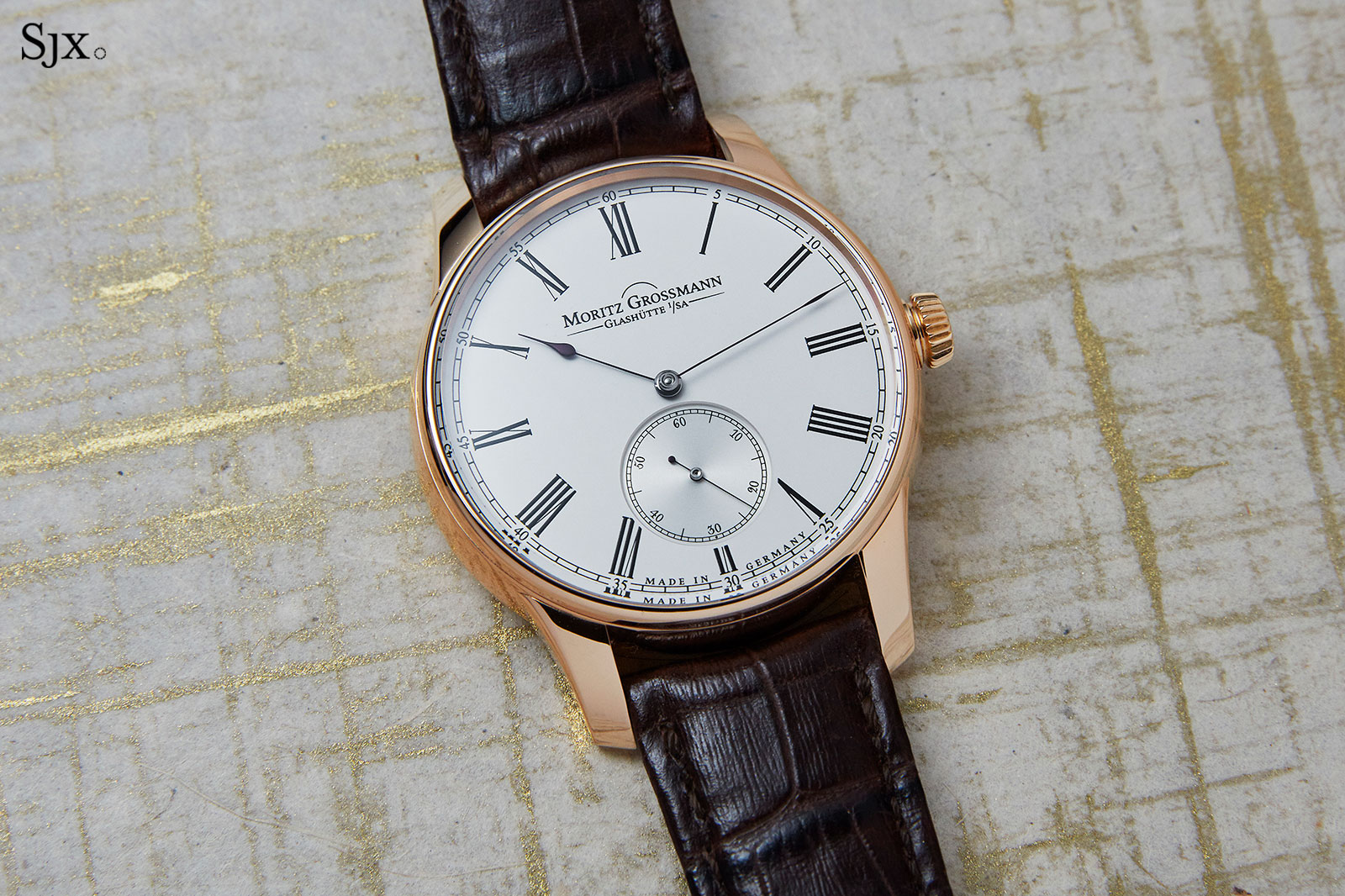 The very best time-only watches tend to be hand-wound; Akrivia, Credor, Dufour, Voutilainen and the like. Automatics are few, so rare that they can be counted on one hand. The Laurent Ferrier Galet Micro-Rotor was probably the best automatic – in terms of finishing and construction – of recent years. But now there’s a new addition to that very small club, the Hamatic by Moritz Grossmann.

Named after a 19th century German watchmaker, Moritz Grossmann is indeed the same company that brought us the ridiculous watches that commemorate the Kim-Trump summit, FIFA World Cup, and Super Bowl. But forgive them those transgressions, because the Hamatic is powered by a truly impressive and novel movement. 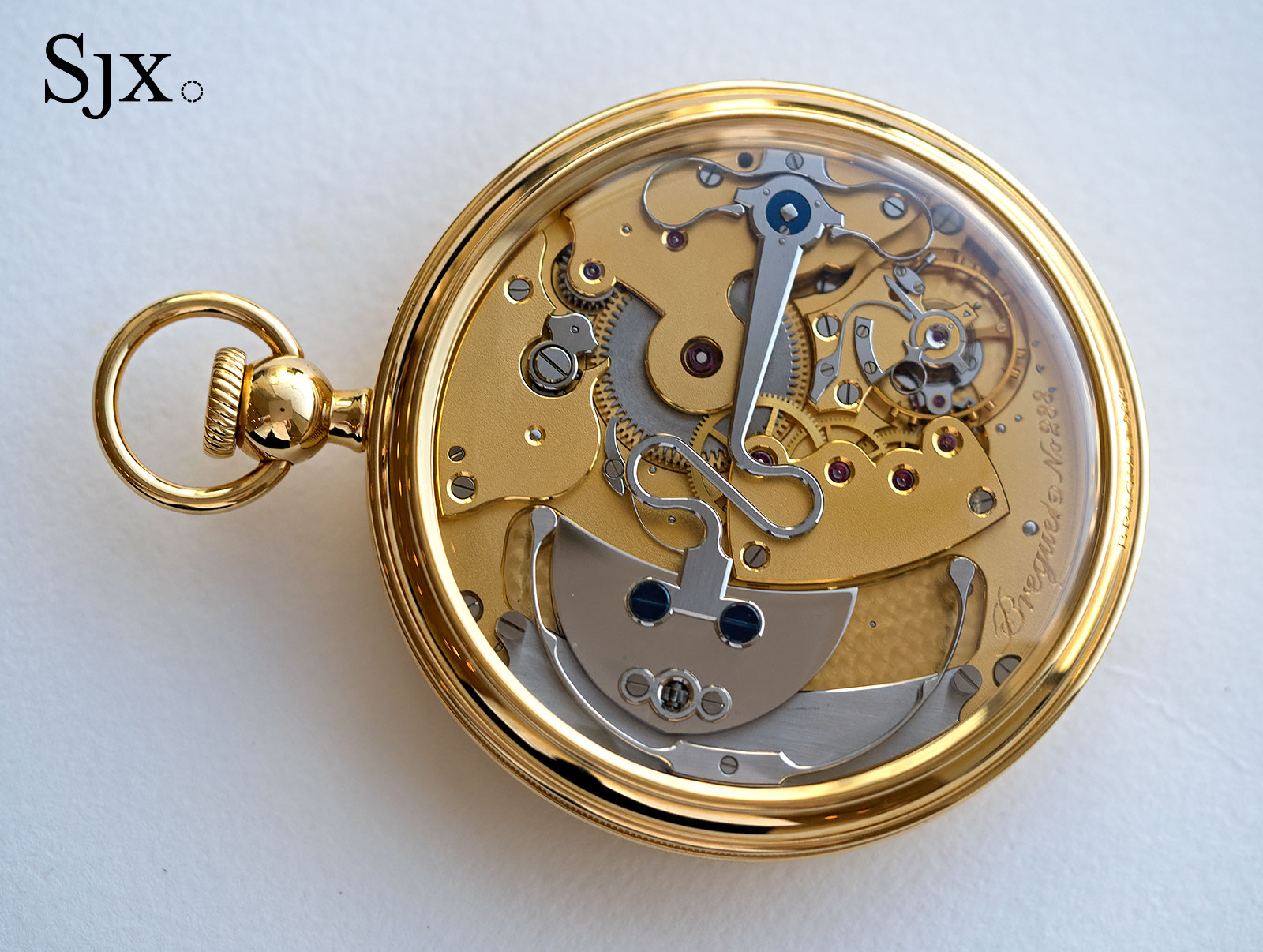 A Breguet Souscription pocket watch made in the 1990s by Michel Parmigiani, equipped with a hammer automatic mechanism similar to those found in the 19th century originals 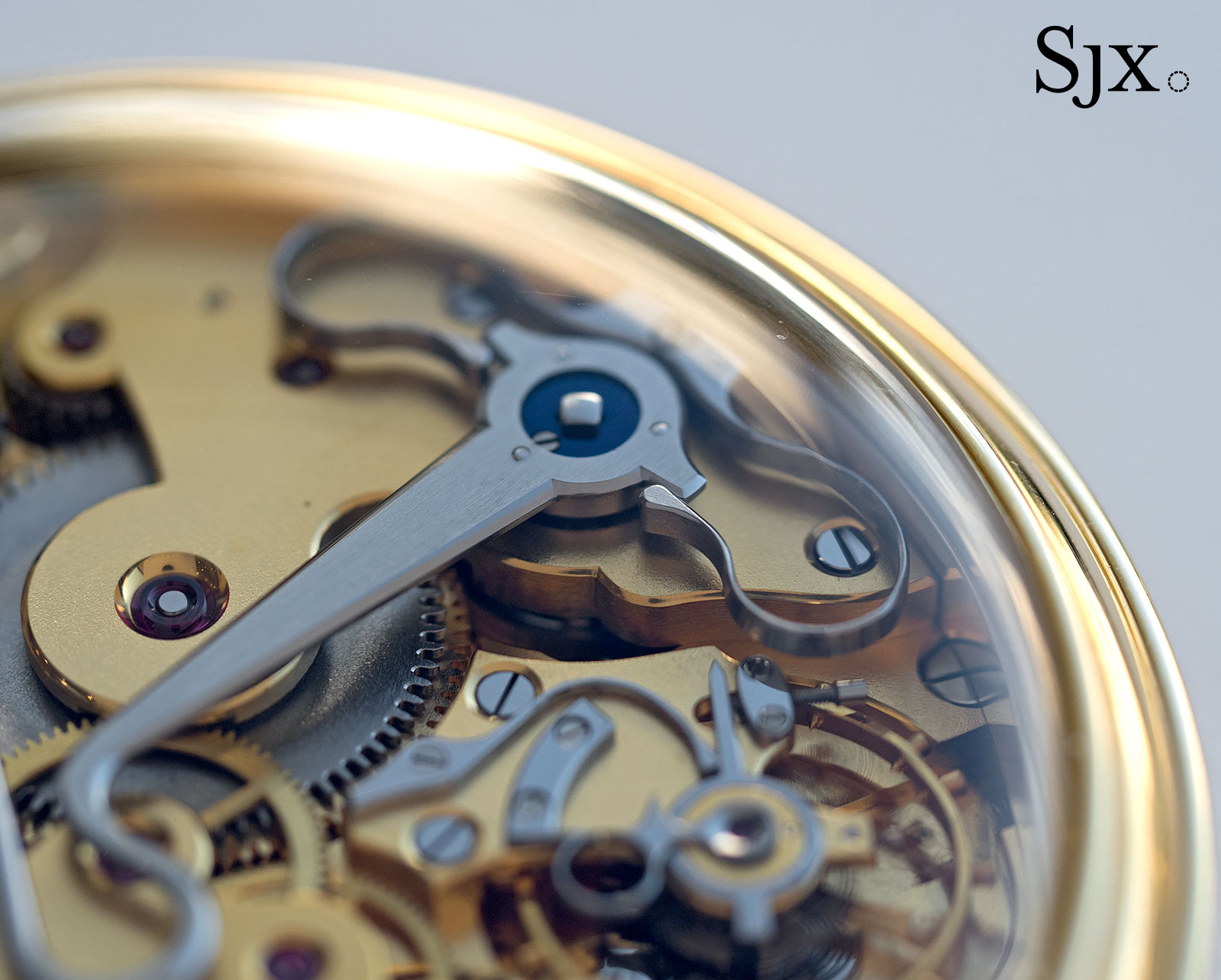 Commercially, the perpétuelle did decently well as a niche product – Breguet was, after all, the original watch marketing genius – but mechanically, less so. Breguet produced perhaps 80 or 90 perpétuelle pocket watches over about four decades, but the winding mechanism did not work particularly well. The swinging weight did not wind the barrel efficiently, while also generating too much friction and shock.

Subsequent efforts to improve the mechanism made by various watchmakers over the subsequent century, culminating in the bumper automatic of the 1920s. But it was Rolex that invented the modern automatic movement, characterised by a full rotor oscillating 360 degrees, when the Oyster Perpetual made its debut in 1931.

The Hamatic is a return to the hammer winding mechanism; ironically an anachronistic mechanism made possible by modern engineering. It relies on an egg-shaped weight that swings back and forth, and in the process winds the barrel. Most importantly, the hammer winding works: according to Moritz Grossmann’s chief executive, Christine Hutter, six hours on the wrist while doing moderate activity – neither sitting still nor jogging – results in a fully wound barrel. 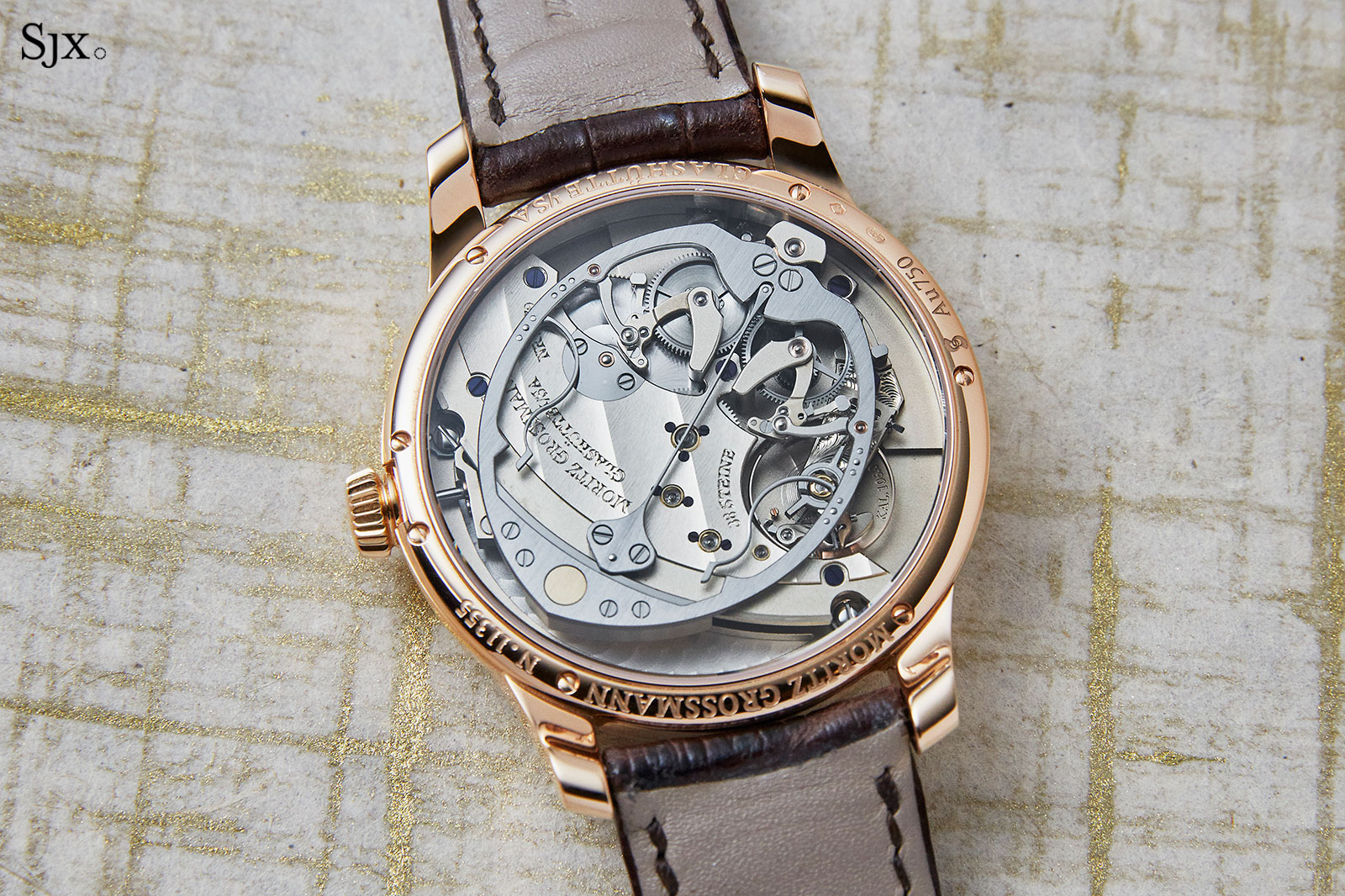 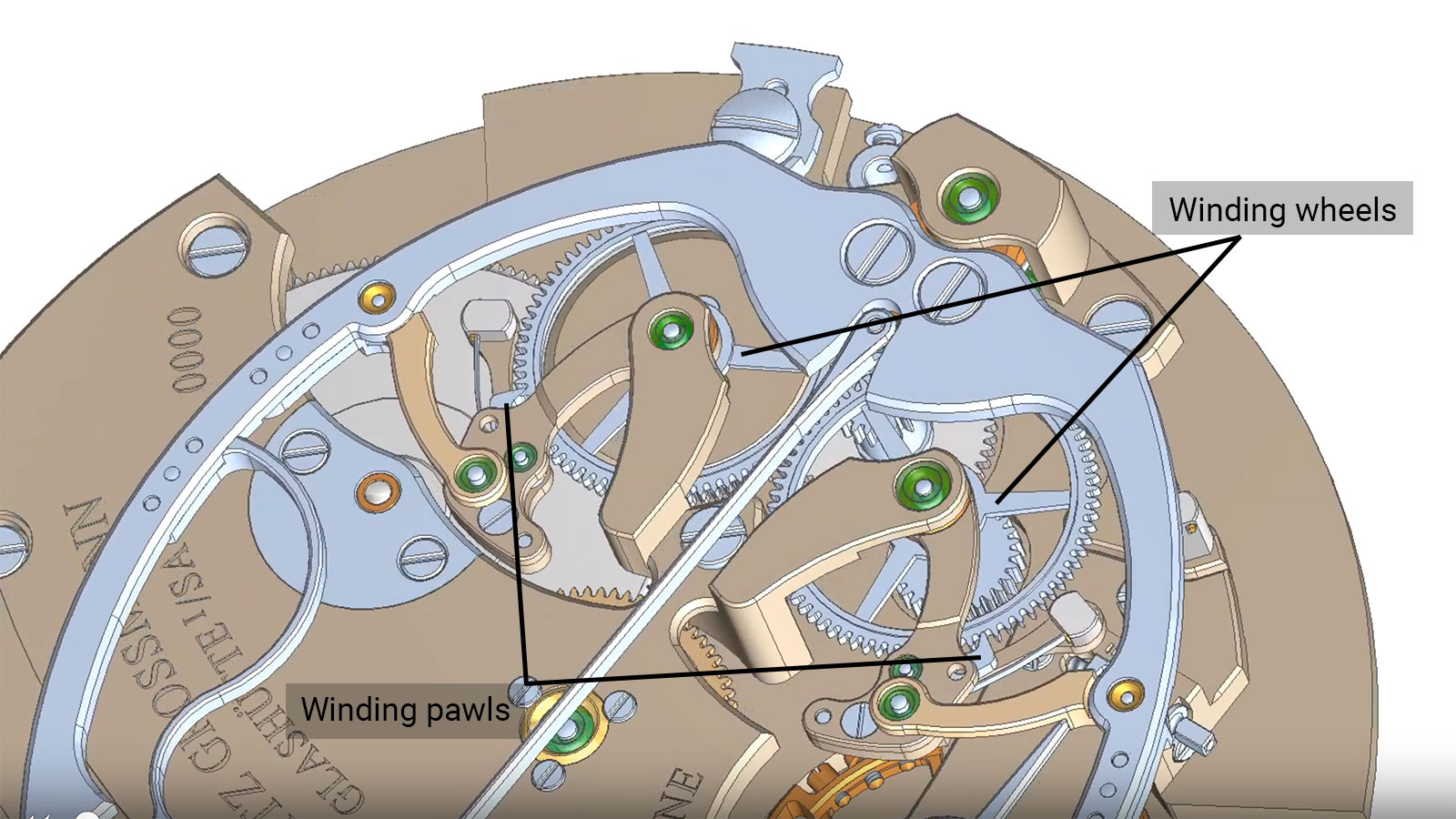 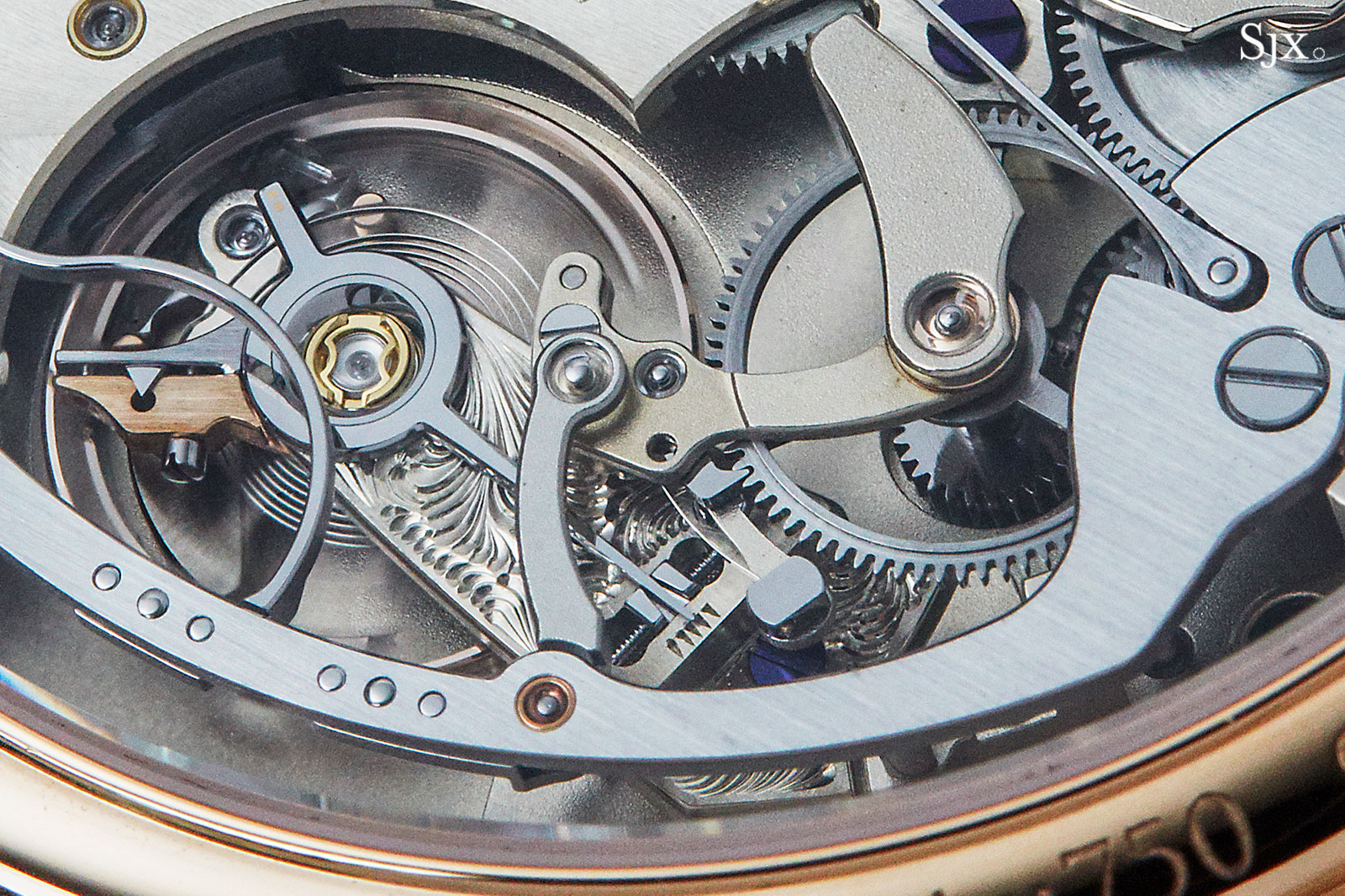 The swinging weight causes a pawl to catch the teeth of its winding wheel, pushing the wheel and winding the mainspring. When one pawl-and-wheel is engaged, the other is disengaged, and vice versa.

Each pawl-and-wheel pair engages only in a single direction of the weight’s movement, each winding in a single, opposing direction. But together they wind the mainspring bidirectionally.

One of the downsides of the IWC Pellaton mechanism is its volume; it takes up a lot of space inside the movement. On the Hamatic, the winding mechanism dominates the movement, but that is exactly the point. In fact, the hammer winding is the most visually interesting automatic mechanism in recent memory.

The elaborate construction of the winding mechanism is marvellous. Even the weight, which in essence is just a swinging mass, is filled with beautifully executed details. Its tip carries a solid gold medallion to increase its inertia, while each arm is fitted with an elegantly curved spring that functions as a shock absorber to dampen the movement of the rotor at the end of its winding track. 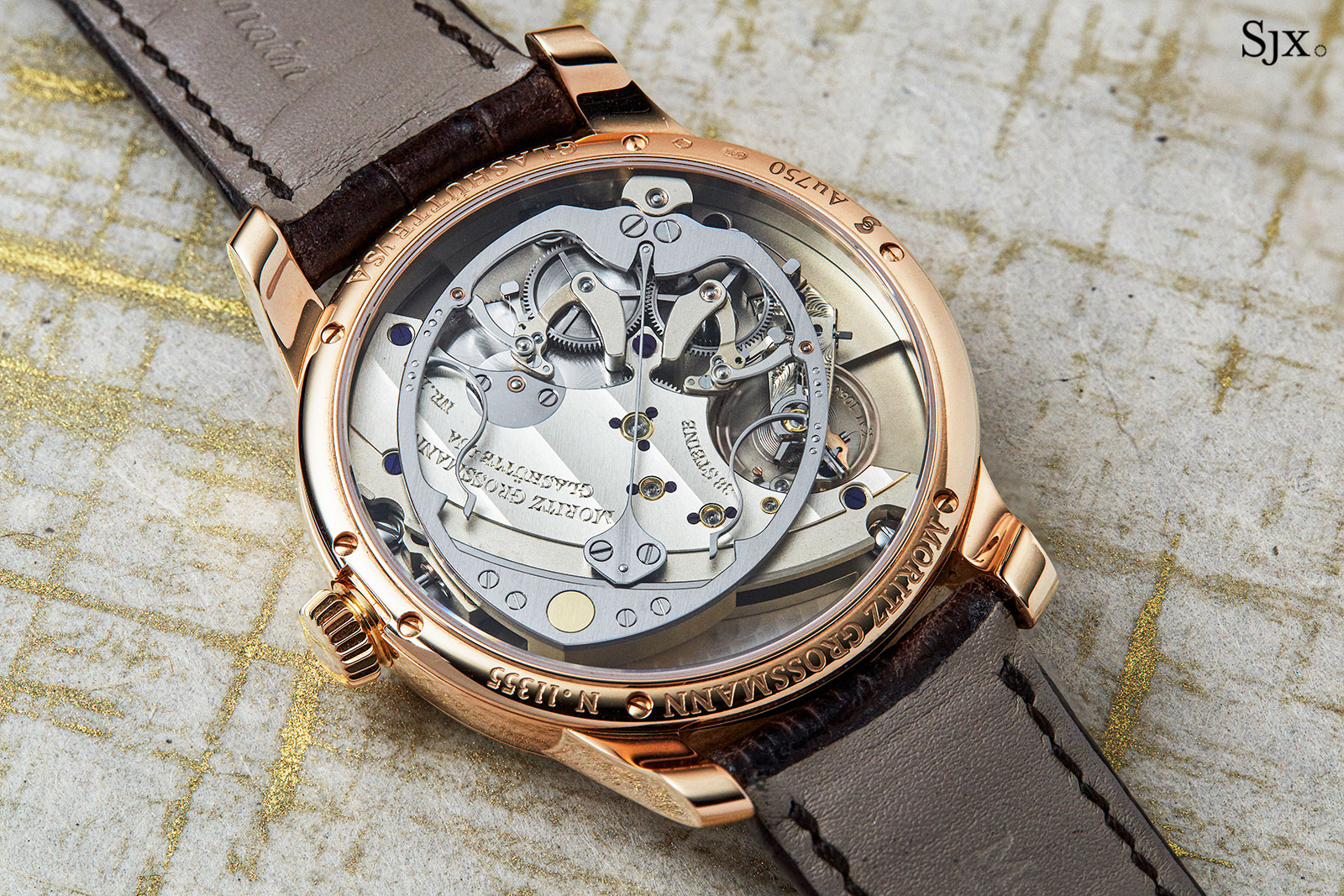 The twin springs acts against the thin steel detent that sits right down the middle of the weight. The purpose of the detent is to cause the rotor to return to its neutral position, which ensures that the movement winds optimally regardless of the position or motion of the wrist. Without such a device, the weight would sit stationary at its extreme position if the watch was on its side. 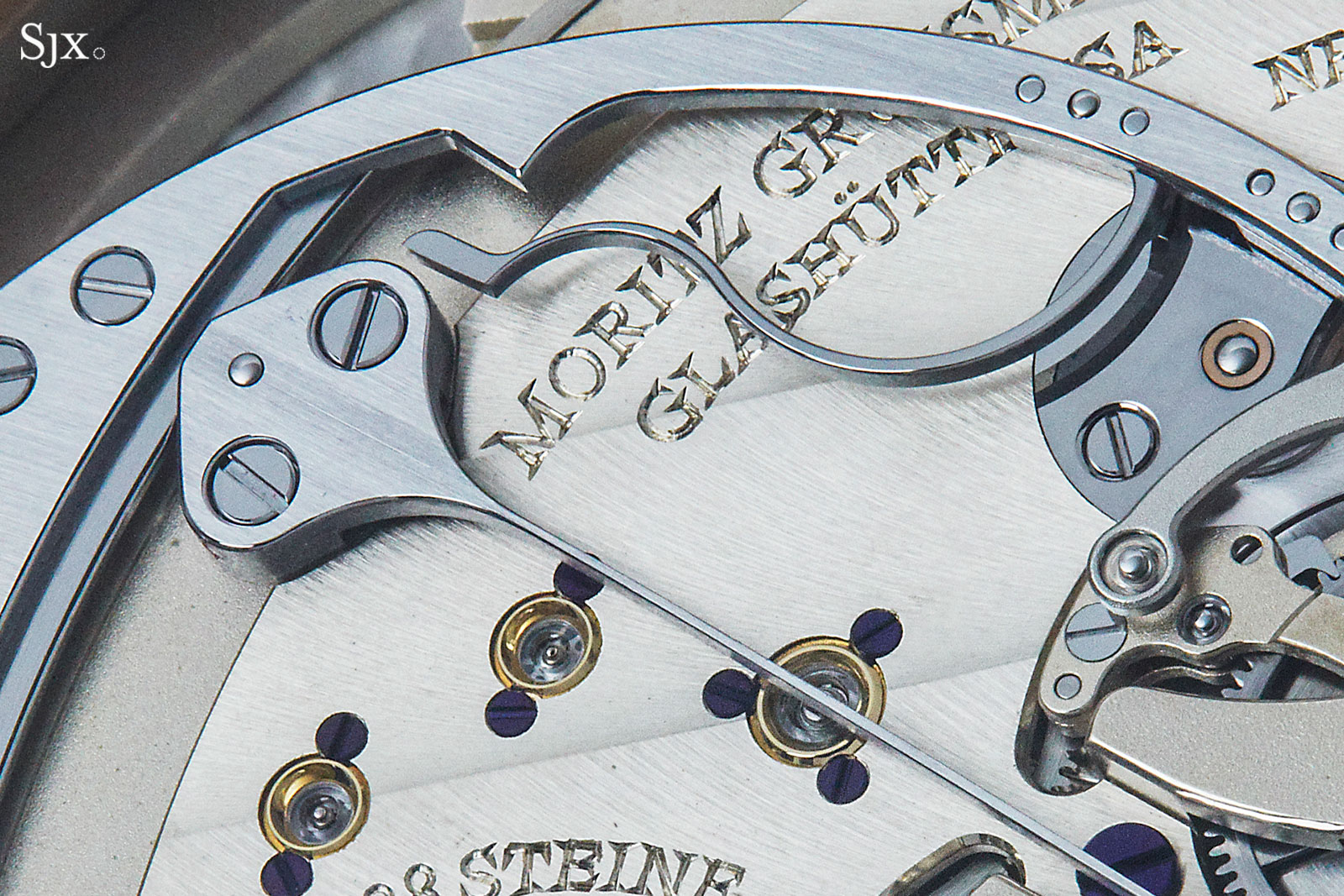 Because the hammer winding mechanism occupies that much real estate, the rest of the movement has been reduce to the bare minimum. A handful of concessions have been made to that end, most notably the flat hairspring instead of the overcoil that’s standard on other Grossmann watches. The flat hairspring is necessary because part of the winding mechanism sits over the balance cock. Beyond the novelty of the winding mechanism, the other attraction of the movement is its excellent construction and finishing. The winding mechanism is entirely steel and gorgeously finished, with straight graining on the top, and polished, bevelled edges all around. Even the finely shaped steel springs are decorated with anglage. 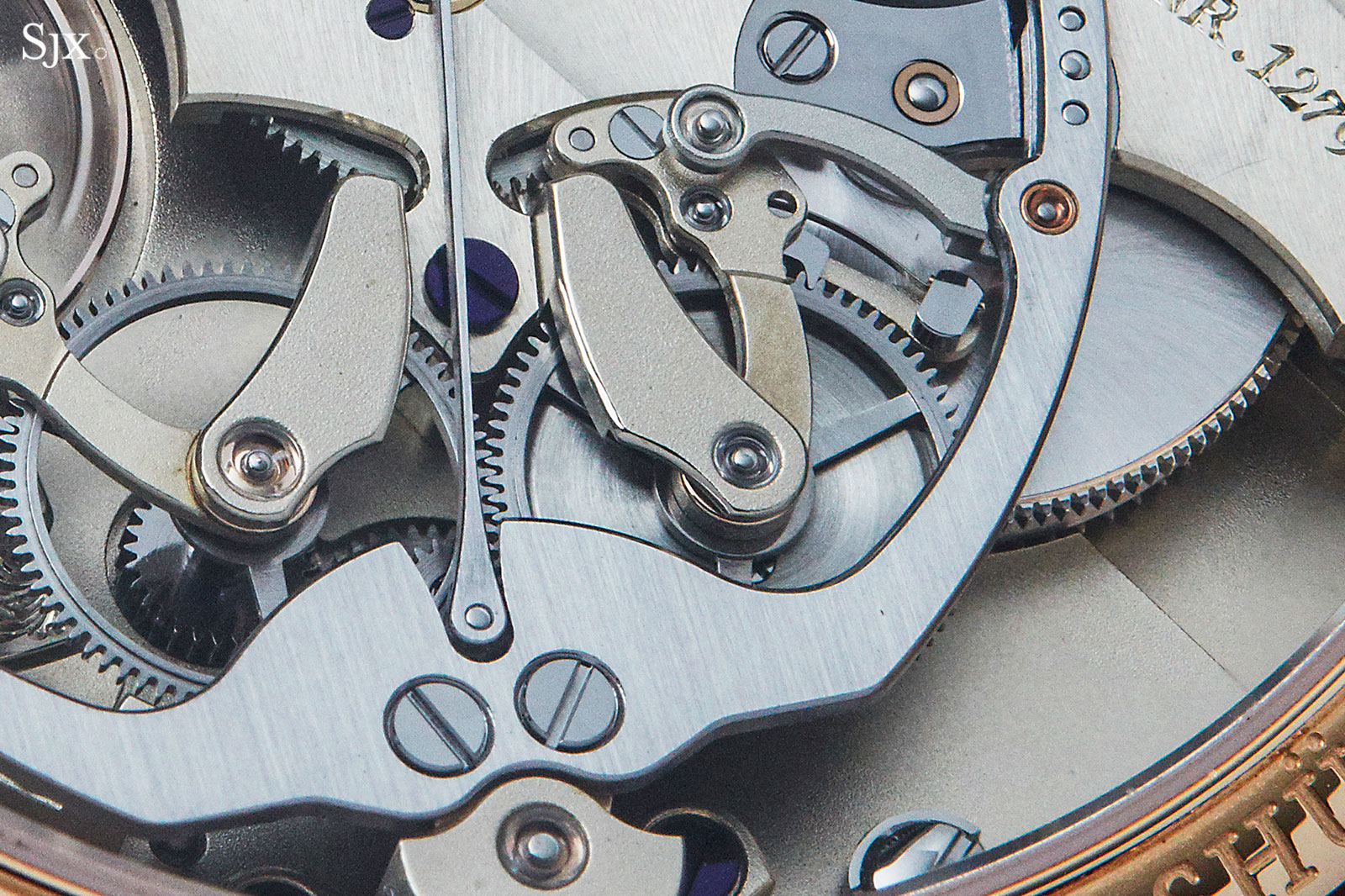 Note the prominent anglage on the damper spring 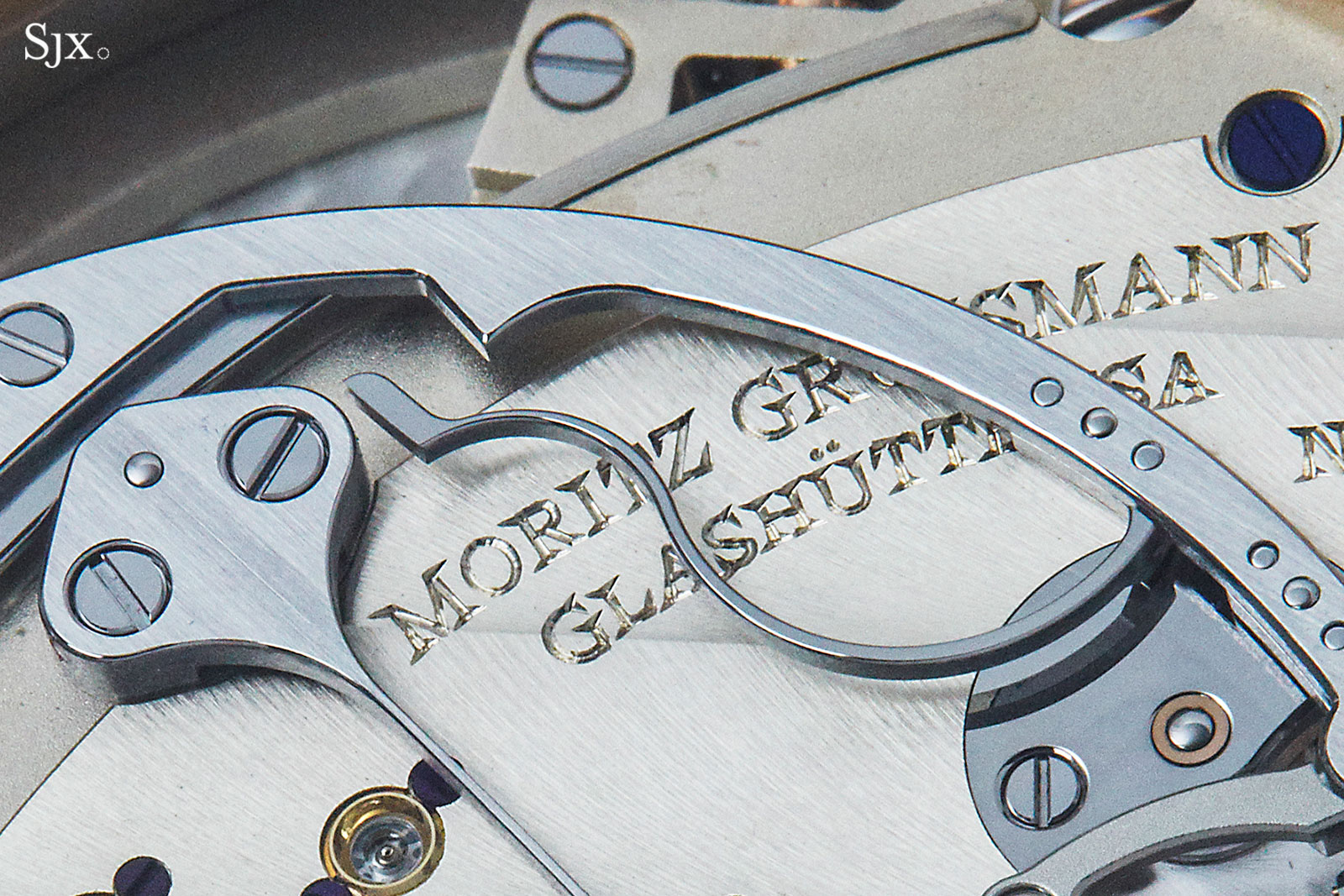 All of the lettering on the bridges is hand-engraved, hence the characteristic serif font

The rest of the movement is replete with details widely associated with Glashütte watchmaking, including the trio of jewels sitting in screwed gold chatons. Another is the black polished steel cap, which is conventionally found on the escape wheel cock, that covers the upper pivot of the barrel. And of course the balance cock is hand-engraved and fitted with a micrometric screw regulator, an old fashioned detail inspired by 19th century pocket watches.

The polished steel cap at centre-left 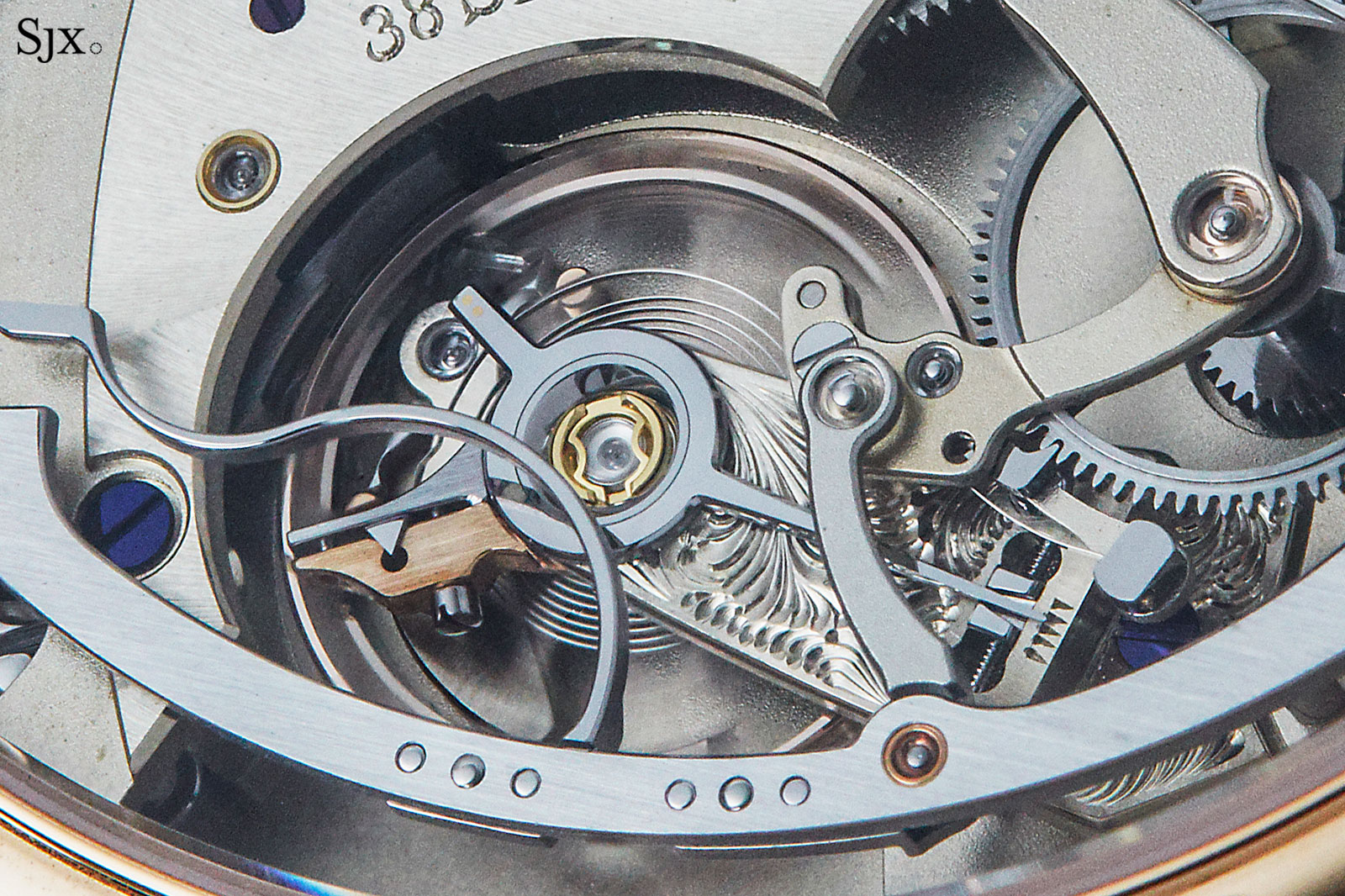 And the incredible hands

On the front, the Hamatic is similar to other Grossmann watches. It’s classical and slightly plain, but handsome enough; Grossmann fortunately abandoned the initial dial for the Hamatic, which featured unsightly cut-outs to reveal the winding mechanism.

The dial is made of solid silver, with a design modelled on 19th century pocket watches. That means narrow, elongated Roman numerals and a retro serif font for the numerals on the sub-seconds. The only element on the dial that is modern is the Grossmann logo that wears a little arch much like the Citibank emblem. Grossmann now has an alternative logo, modelled on its 19th century signature on pocket watches, thought that is now only offered on the Vintage Power Reserve. 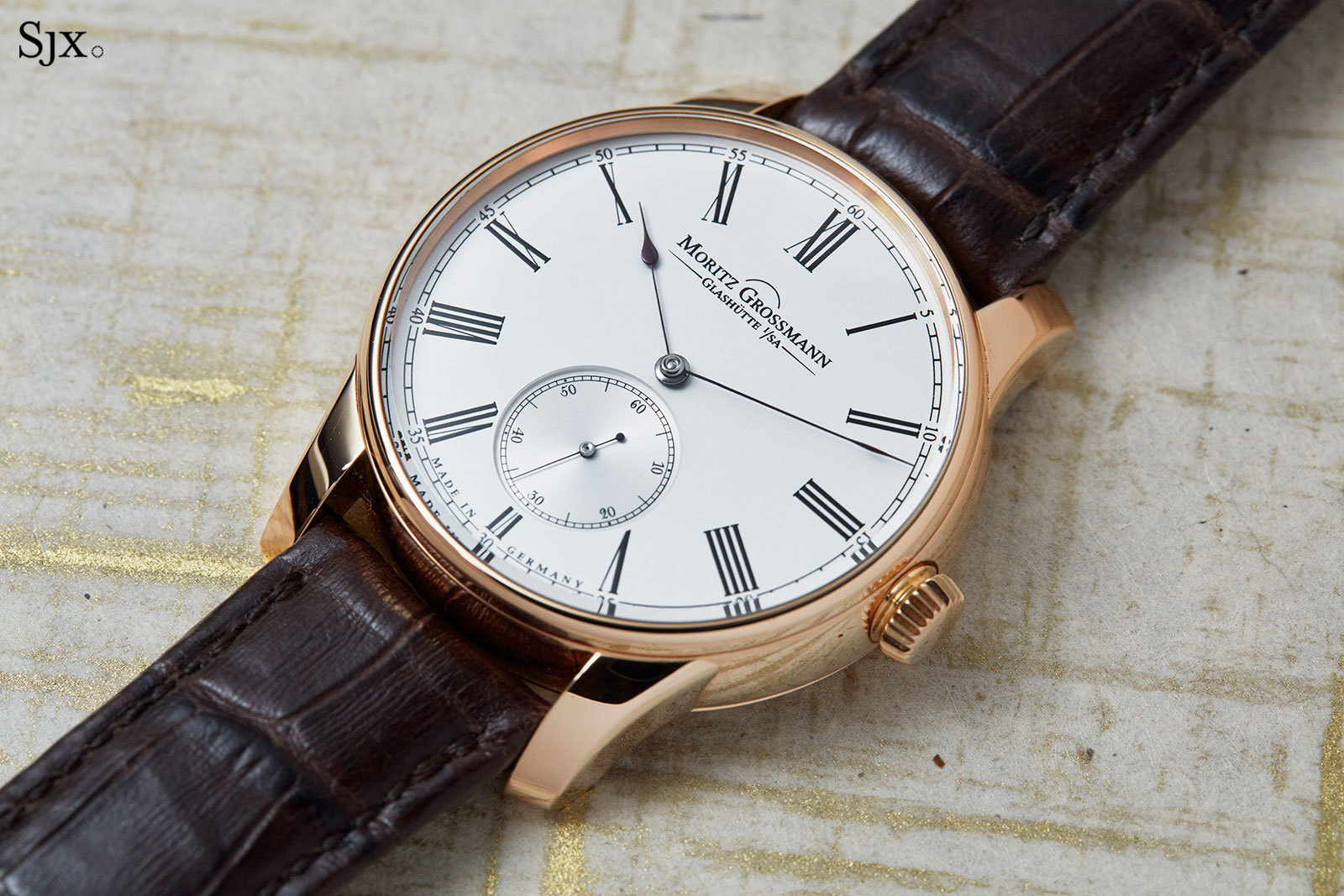 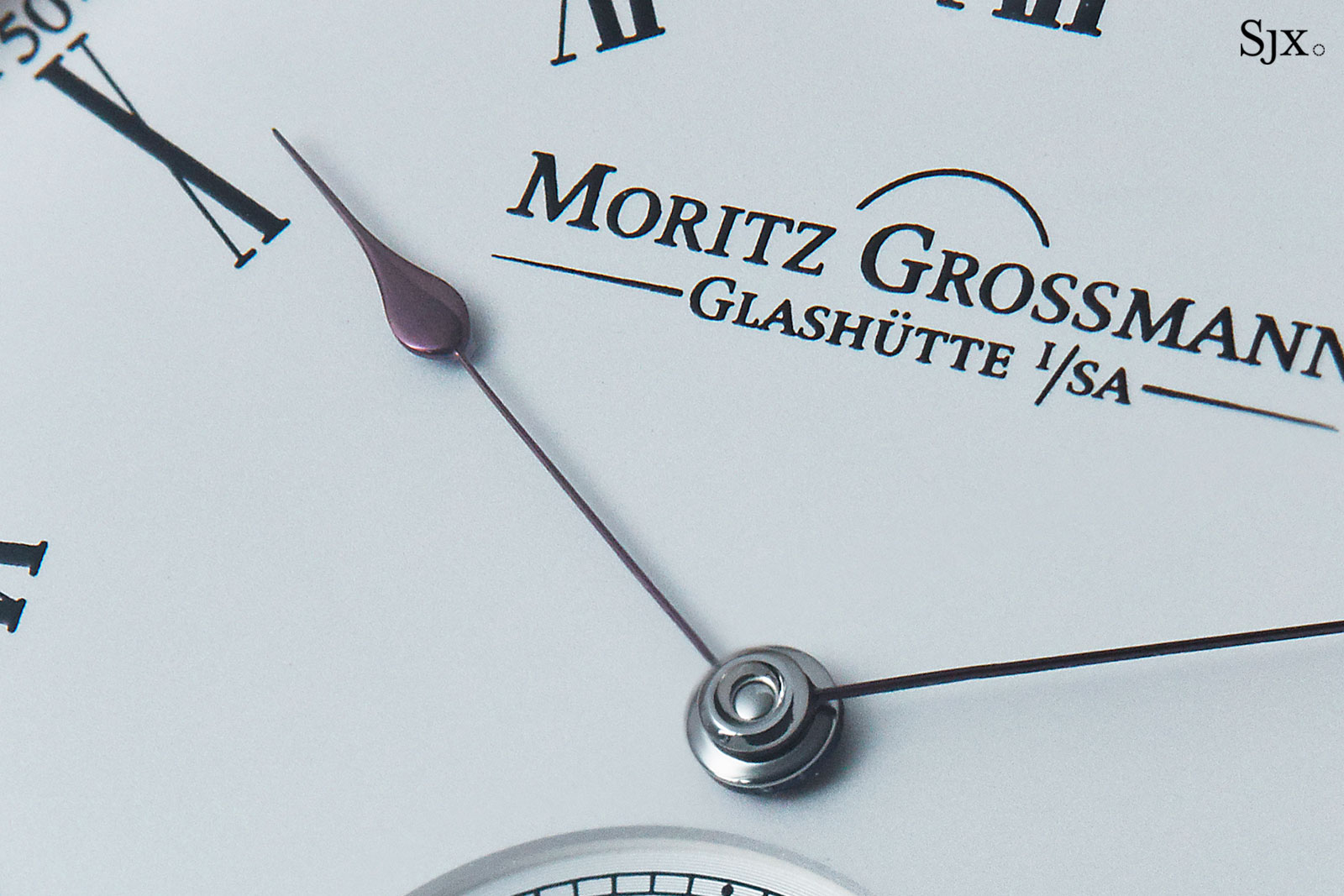 The most outstanding element on the front are the hands, which are impossibly fine. The thinnest point of the hour hand is an incredible 0.1mm wide, while the seconds hand is only 0.05mm. In fact, the minute hand is so thin it’s narrower than the Roman “I” numerals on the dial, and the seconds hand is barely the same size as the five-second hashmark on the sub-dial track.

All of that takes a significant amount of manual finishing to achieve; the hands are filed down to the desired size, then polished and finally, heat-treated. Every step is done by hand.

That being said, the hands are a rare occurrence in modern watchmaking – too much effort was put into refining them. Even though the hands are remarkable examples of craftsmanship, they are too thin for the watch. The watch is large, and the dial correspondingly sized, which leaves the hands looking mismatched. The standard Moritz Grossmann hands – larger but still refined and fabricated entirely by hand – would fit the dial better. The watch case is the standard Grossmann case, which measures 41mm in diameter and 11.35mm high. Though it’s not large by any means, the case design means it feels slightly chunky. The case sides are flat and slope upwards towards the bezel, while the lugs are wide and high. Add to that a mirror polish on all surfaces, and the result is a case that is good but not great. The Hamatic has a fascinating, inventive movement that’s finished to an exceptionally high degree. Yes, the front is a bit boring, but it still ranks as one of the most, if not the most, notable and interesting automatic movements for a long time.

In terms of value, the Hamatic costs slightly less than the Laurent Ferrier Galet Micro-Rotor. That’s fair, and the Hamatic has the advantage of being more unusual in construction and function.

The only weakness of the watch is nothing intrinsic, and instead lies with Moritz Grossmann’s direction – Kim-Trump watches do not a great watch brand make. But in all tangible parameters, the Hamatic scores highly.