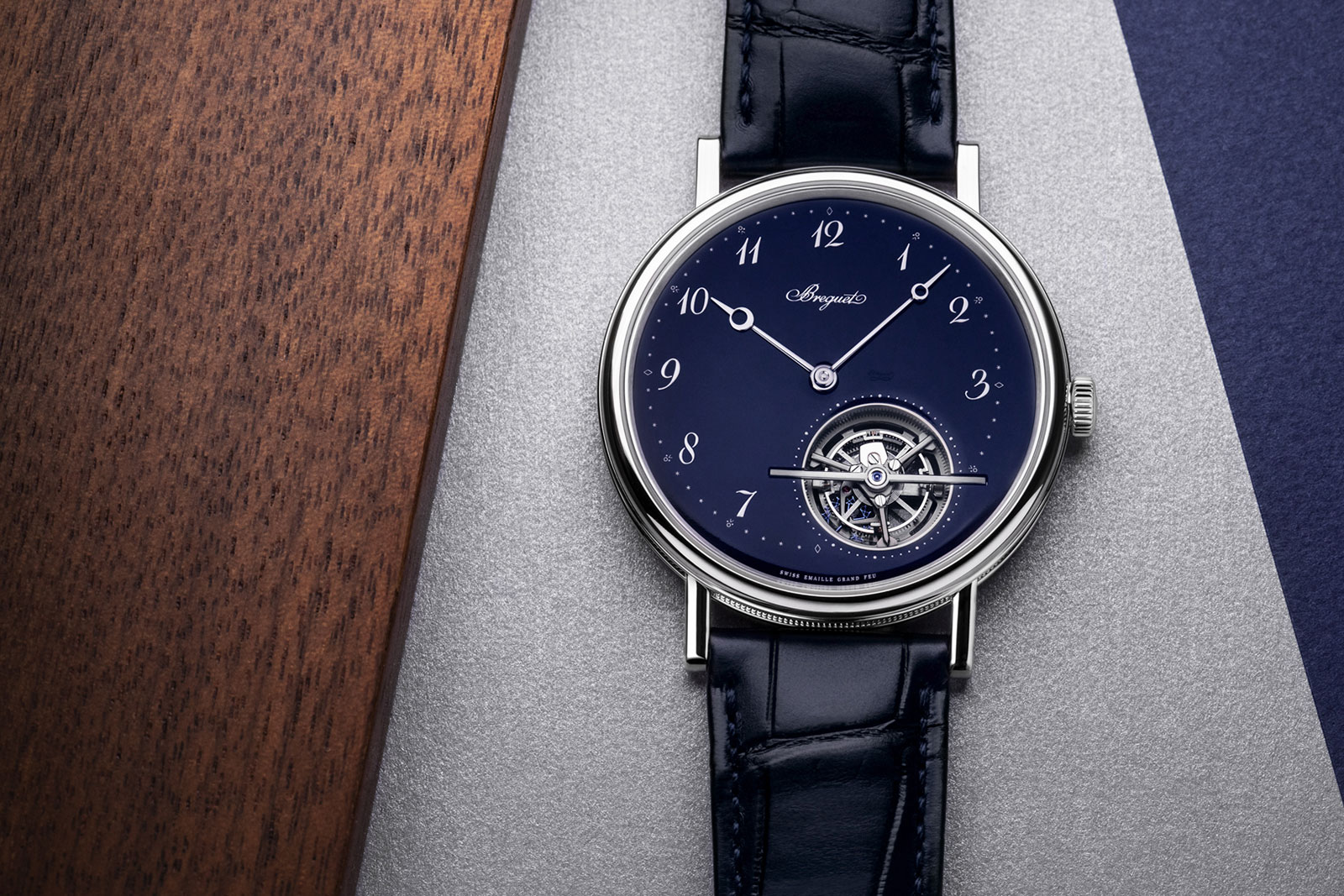 Slim, elegantly and typically Breguet in style – the gently off-centre dial echoes asymmetric pocket watches – the Classique Tourbillon Extra-Plat 5367 was originally launched with a guilloche dial, before being given a white, fired enamel dial. And last year Breguet debuted a striking variant with a fully skeletonised movement decorated in a surprisingly elaborate manner.

For 2020 Breguet has returned to its traditional look, albeit with a twist: the dial has been transformed into deep blue enamel for a boutique-only edition. 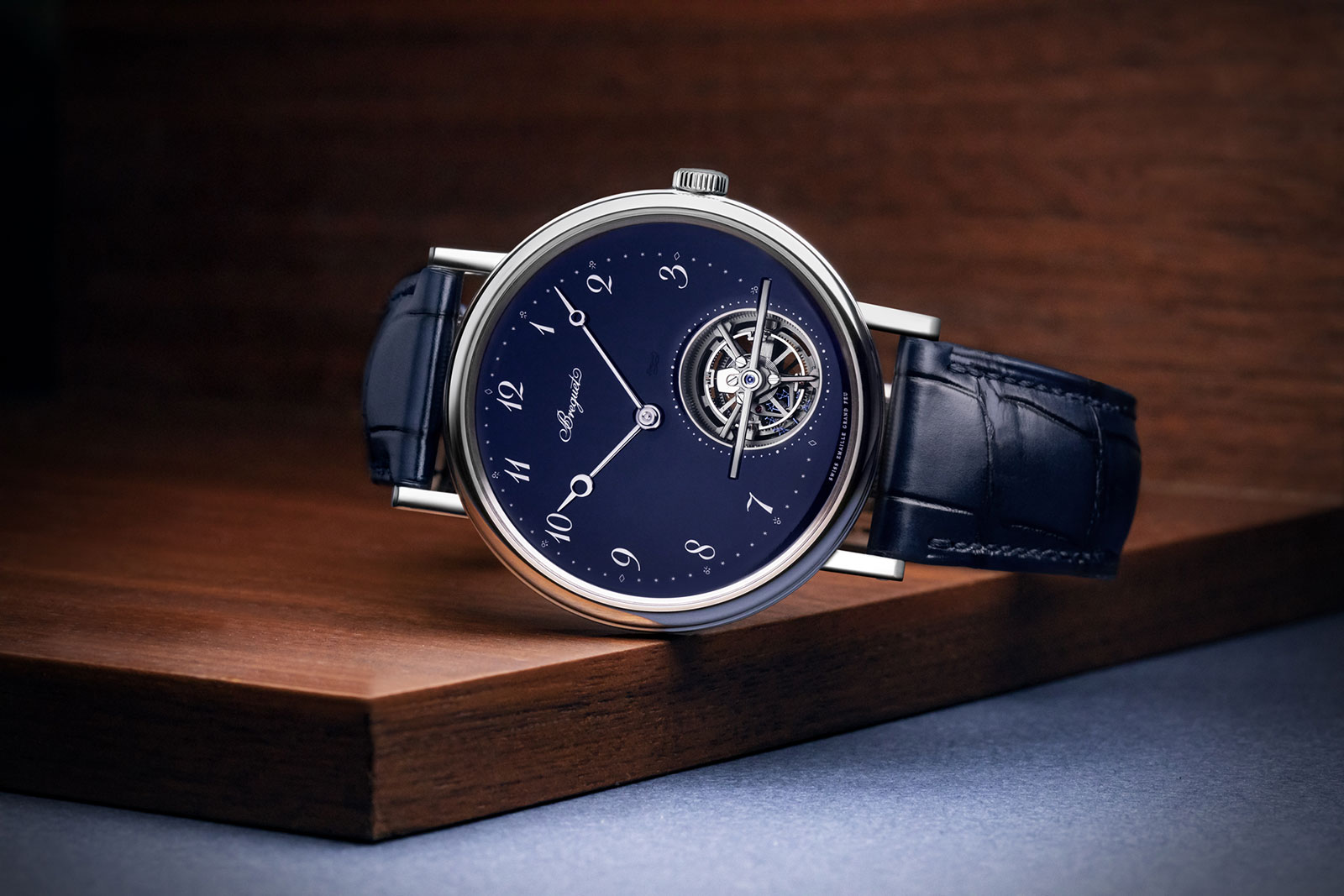 Similar to the makeover applied to the time-and-date Classique 5177, the blue dial is grand feu enamel – vitreous enamel set by firing it in an oven at temperatures over 800°C.

The dial starts as a disc of solid gold, which is then painted with a mixture of enamel powder, water and oil.  It’s then baked in an oven, and the process repeated several times until the deep blue colour is achieved. The surface is then ground down by hand to give it a mirrored finish, before undergoing a final trip to the oven. 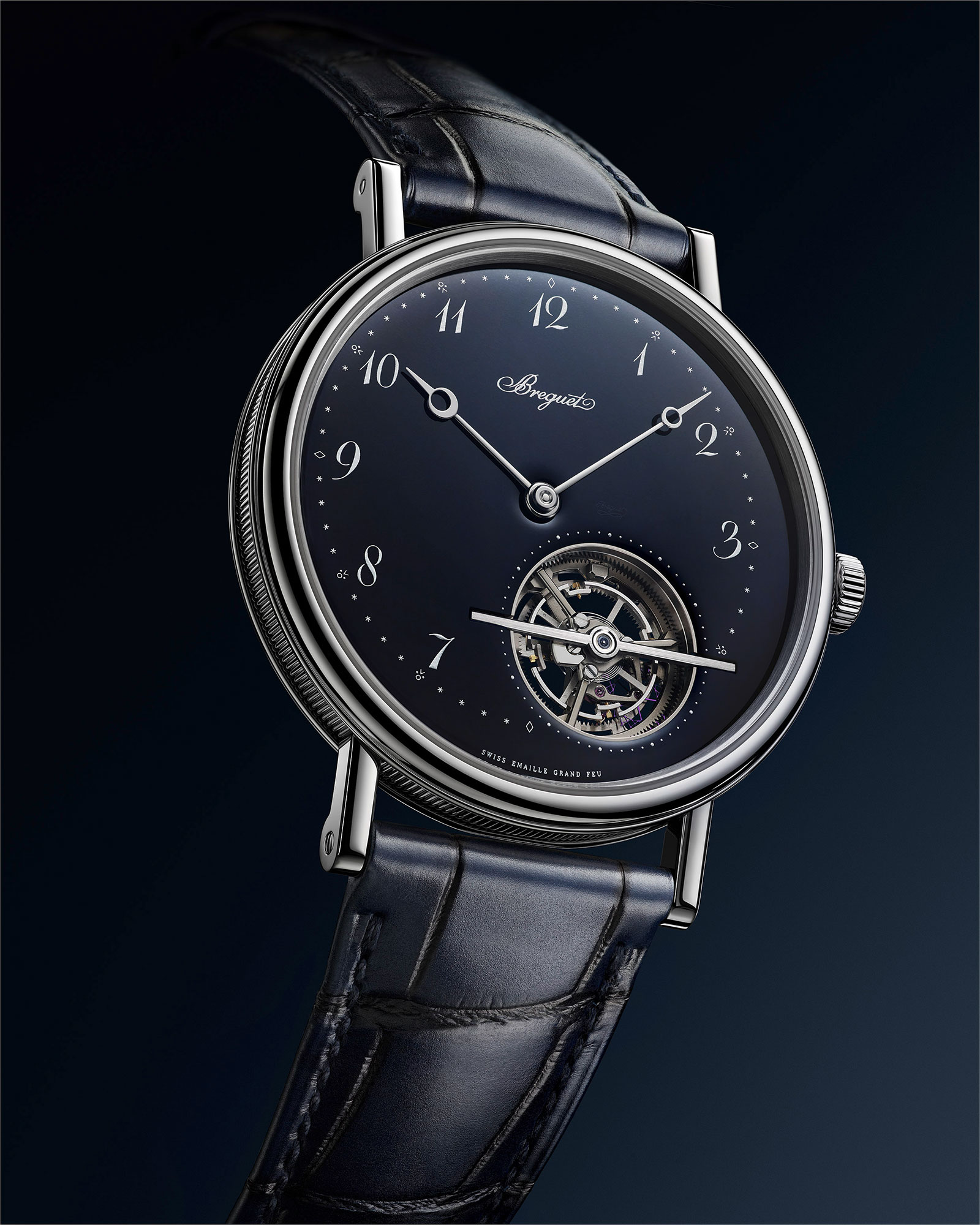 Then the markings on the dial – including the symbols of the minute track and Breguet numerals – are printed in powdered silver, which gives them a granular, metallic sheen. And faintly etched by laser just above the tourbillon is the Breguet “secret” signature, a feature devised in the 19th century to distinguish genuine Breguet pocket watches from counterfeits. 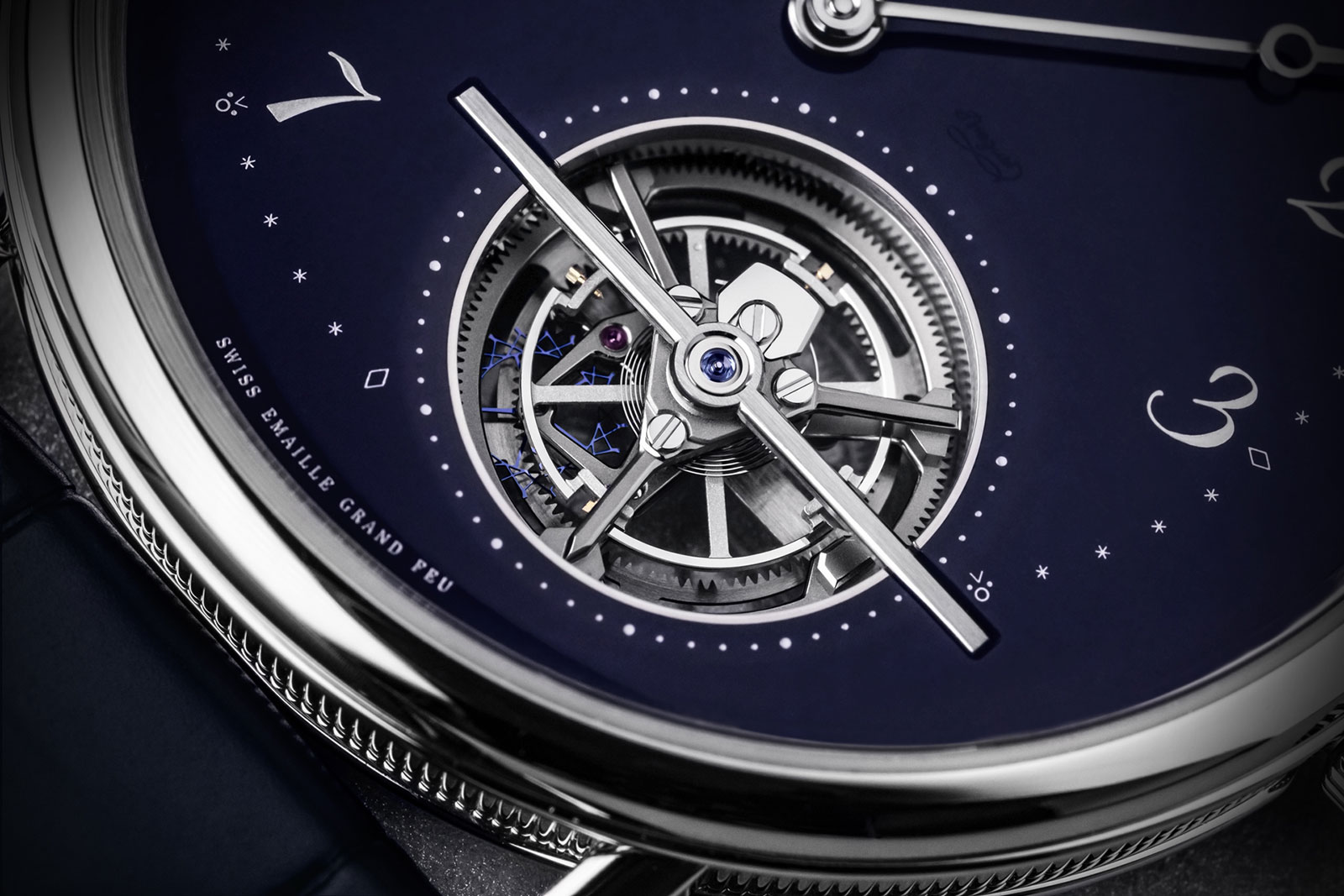 Part of the gold dial base is visible as the metal border for the tourbillon aperture, with the “secret” signature visible just above

The rest of the watch is identical to the standard model. The case is platinum and 41 mm in diameter, but just 7.45 mm high, making it one of the thinnest tourbillon wristwatches on the market.

Credit for the svelte case goes to the cal. 581, a sophisticated movement just 3 mm high. Amongst the features that contribute to its thinness are the floating barrel anchored only on the dial side, as well as peripheral winding mechanism that has the narrow rotor sitting around the perimeter of the movement. 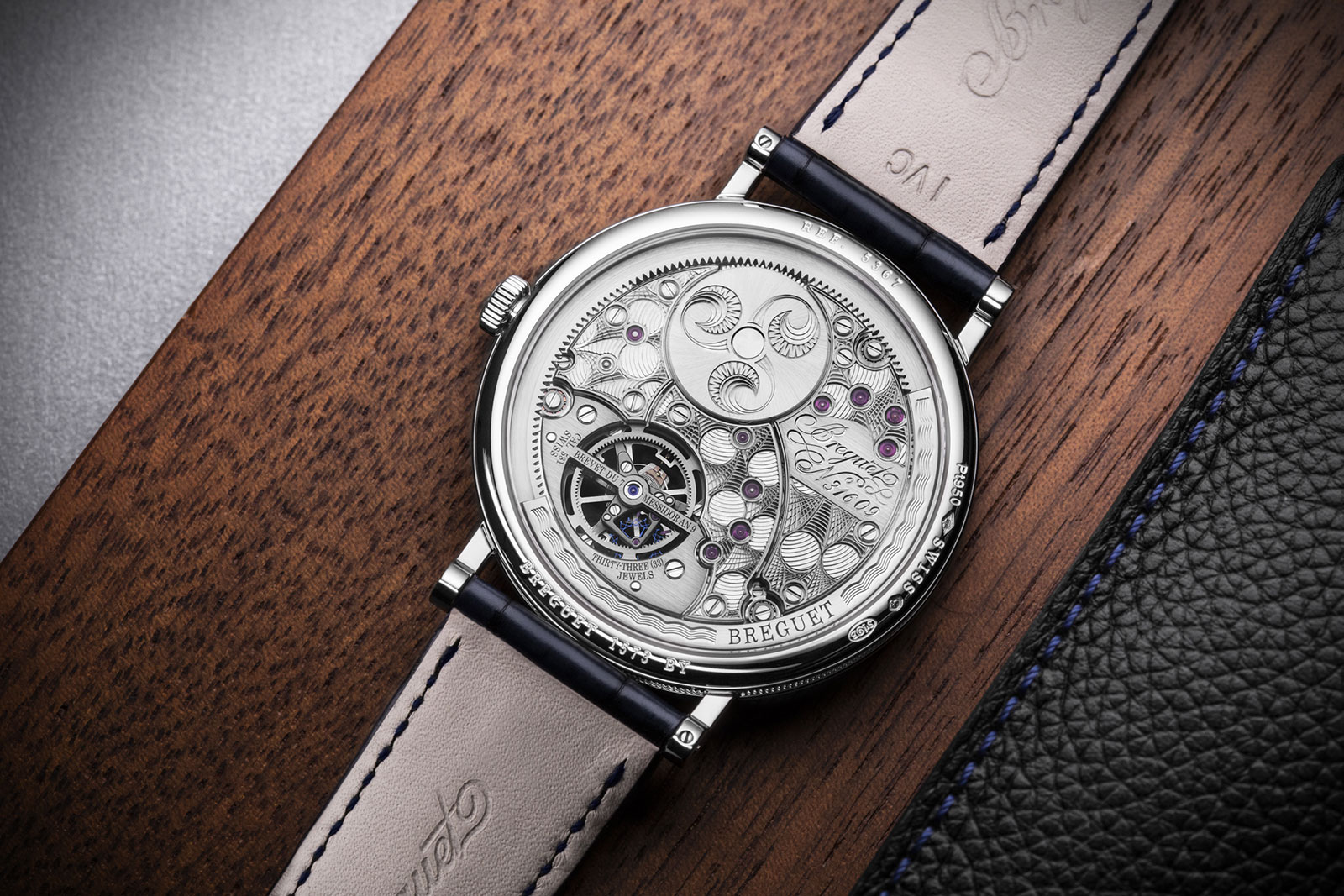 The bridges and barrel cover of the cal. 581 are hand engraved with a geometric motif 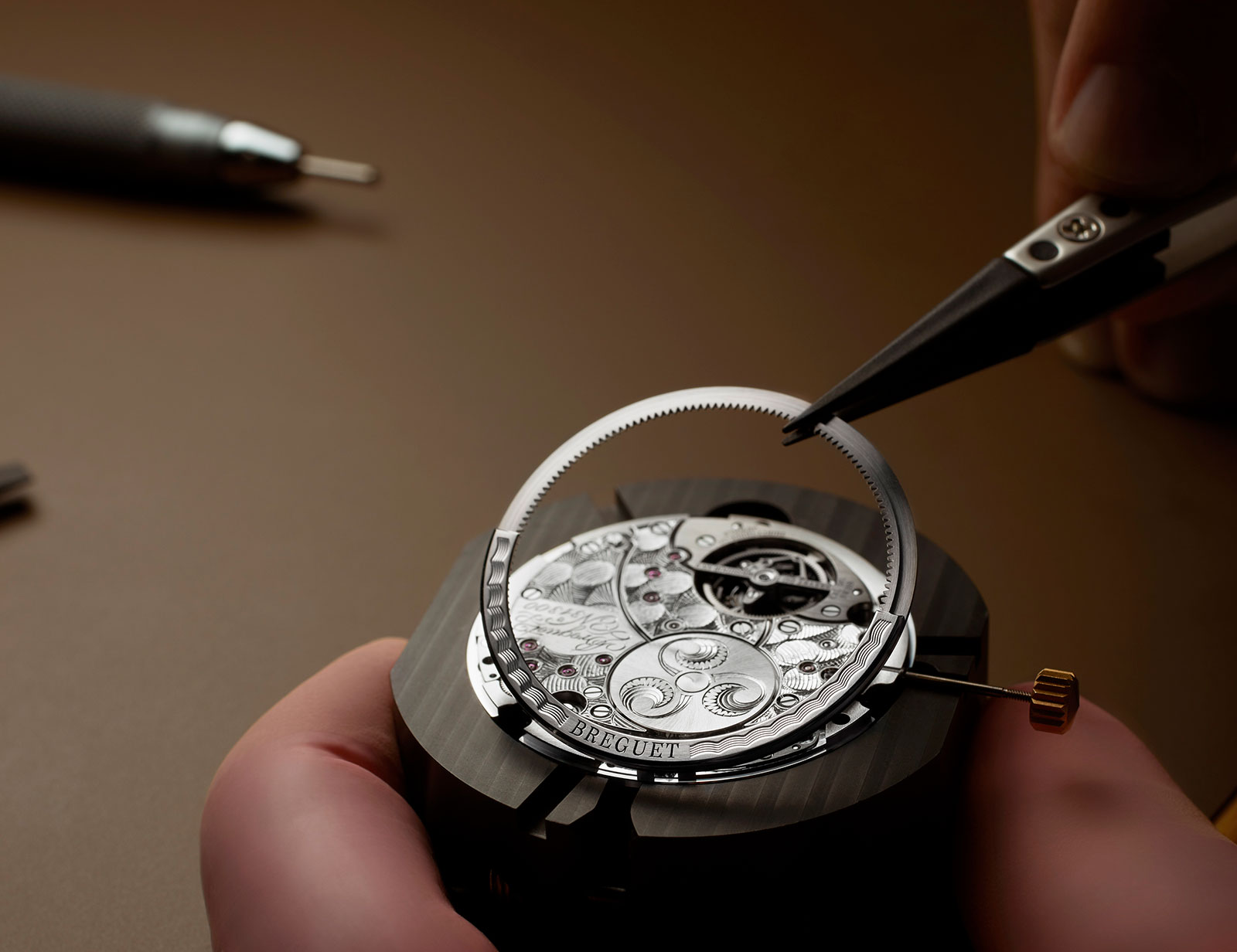 The cal. 581 with the peripheral rotor removed

And the cal. 581 has a longish, 80-hour power reserve, despite the relatively large tourbillon carriage and 4 Hz balance wheel, thanks to the silicon escape wheel and pallet lever horns that operate with negligible friction. Another crucial factor is the “high energy” barrel, which is essentially a mainspring that is longer but thinner than usual, allowing more of it to be coiled into a single barrel.