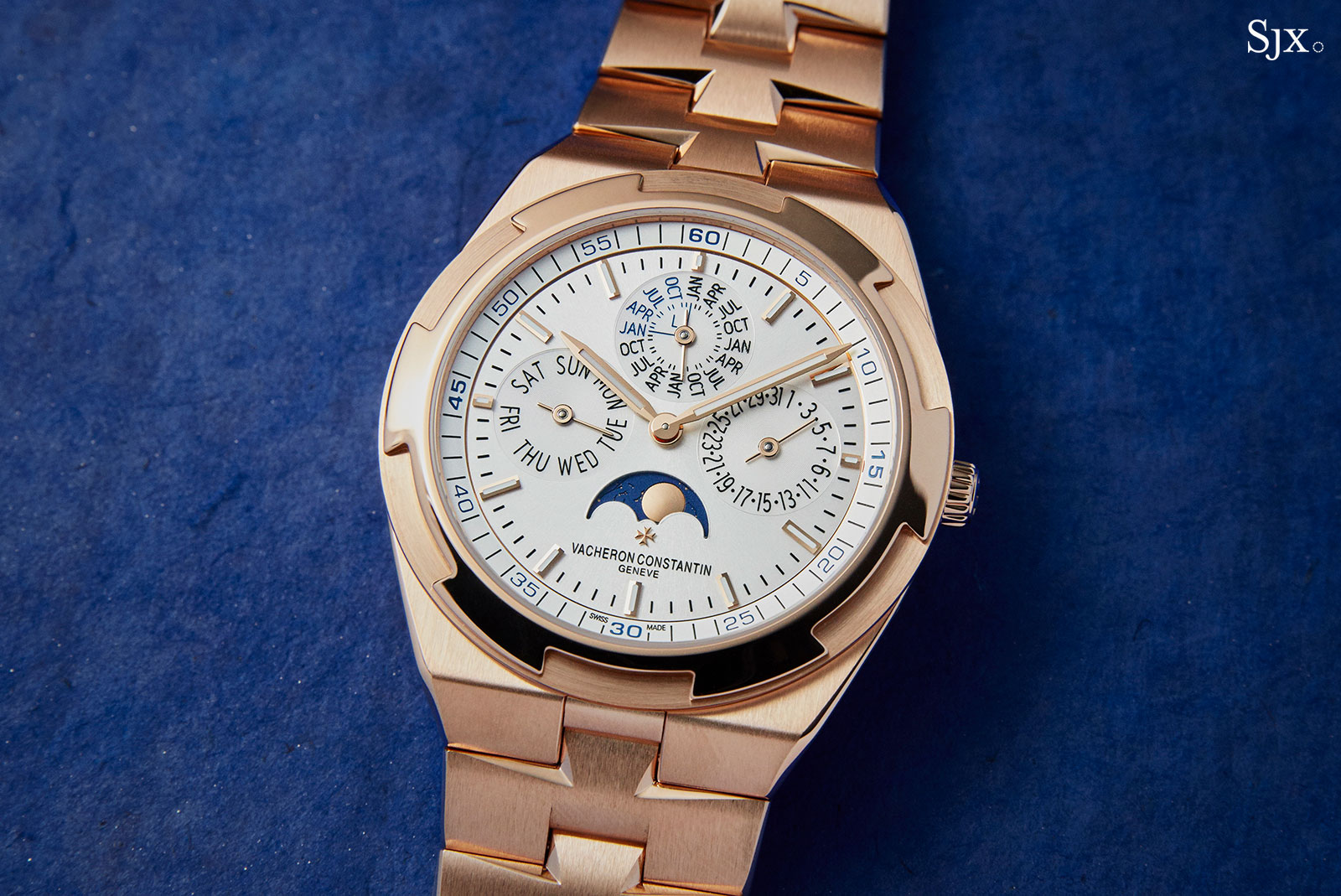 Vacheron Constantin’s sports luxury line-up is a diverse one, including a world time, dual time, and chronograph. The most appealing models in the range, however, are unquestionably the Ultra-Thins, which are unfortunately only available in 18k gold, making them the most expensive. But they are slim, sharply executed and sit beautifully on the wrist.

The collection includes two ultra-thin models, the time-only Overseas Self-Winding Ultra-Thin, and the Overseas Perpetual Calendar Ultra-Thin ref. 4300V. Both share the same base movement, and nearly identical dimensions; close your eyes and it’s difficult to tell the two apart on the wrist. But this story is only about the top of the line perpetual calendar. The perpetual calendar looks like all other Overseas watches, with the trademark bottle cap bezel and sloping case sides. But it is the most elegant of them all despite being a largish watch.

It is exceptionally refined in profile – the case is 41.5mm in diameter, but just 8.10mm high. The elegant proportions are similar to those of the luxury sports watch greats, namely the Royal Oak and Nautilus.

Because the watch is available only in 18k white or pink gold, it weighs enough to feel as expensive as it is. The weight is reassuring, and an important quality. Put simply, it’s a big, flat and heavy watch, which is what a luxury sports watch should be. Though the perpetual calendar is available in pink gold on a leather or rubber strap, the versions on a gold bracelet are definitely the ones to get, even though the price difference is enough to buy a base model Overseas in steel. At this price point the cost of a gold bracelet is unfortunately a fact of life. A big plus that’s unique to the Overseas and not found on any of its peers is the quick-release bracelets and straps. The bands snap onto a fixed bar on the case, so pulling on a tab located on the back of the band is all that’s needed to release it.

But this propriety mechanism brings with it the need to use only Vacheron Constantin replacement straps, which means the style of straps is limited. 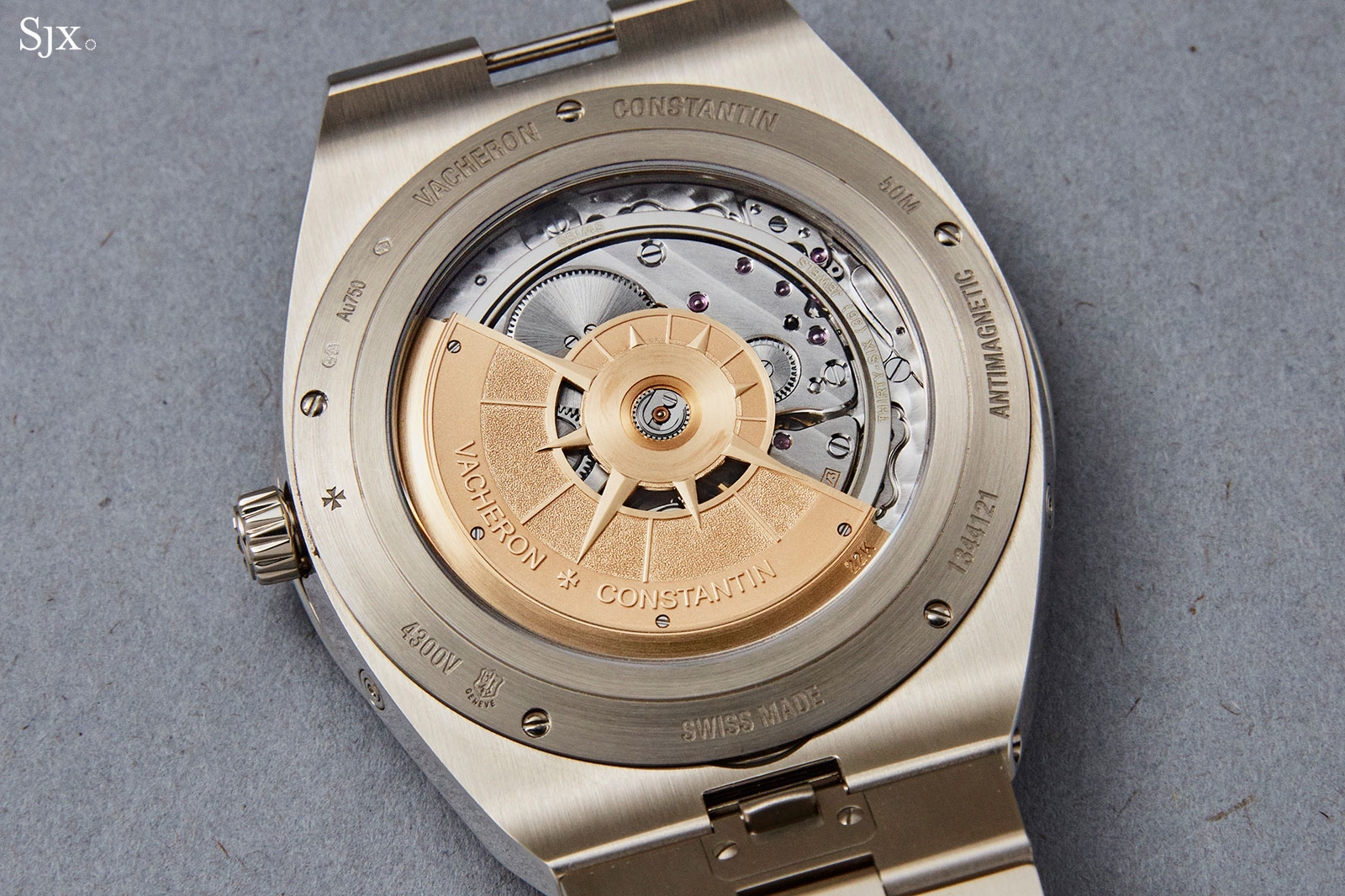 With the top half of the bracelet removed 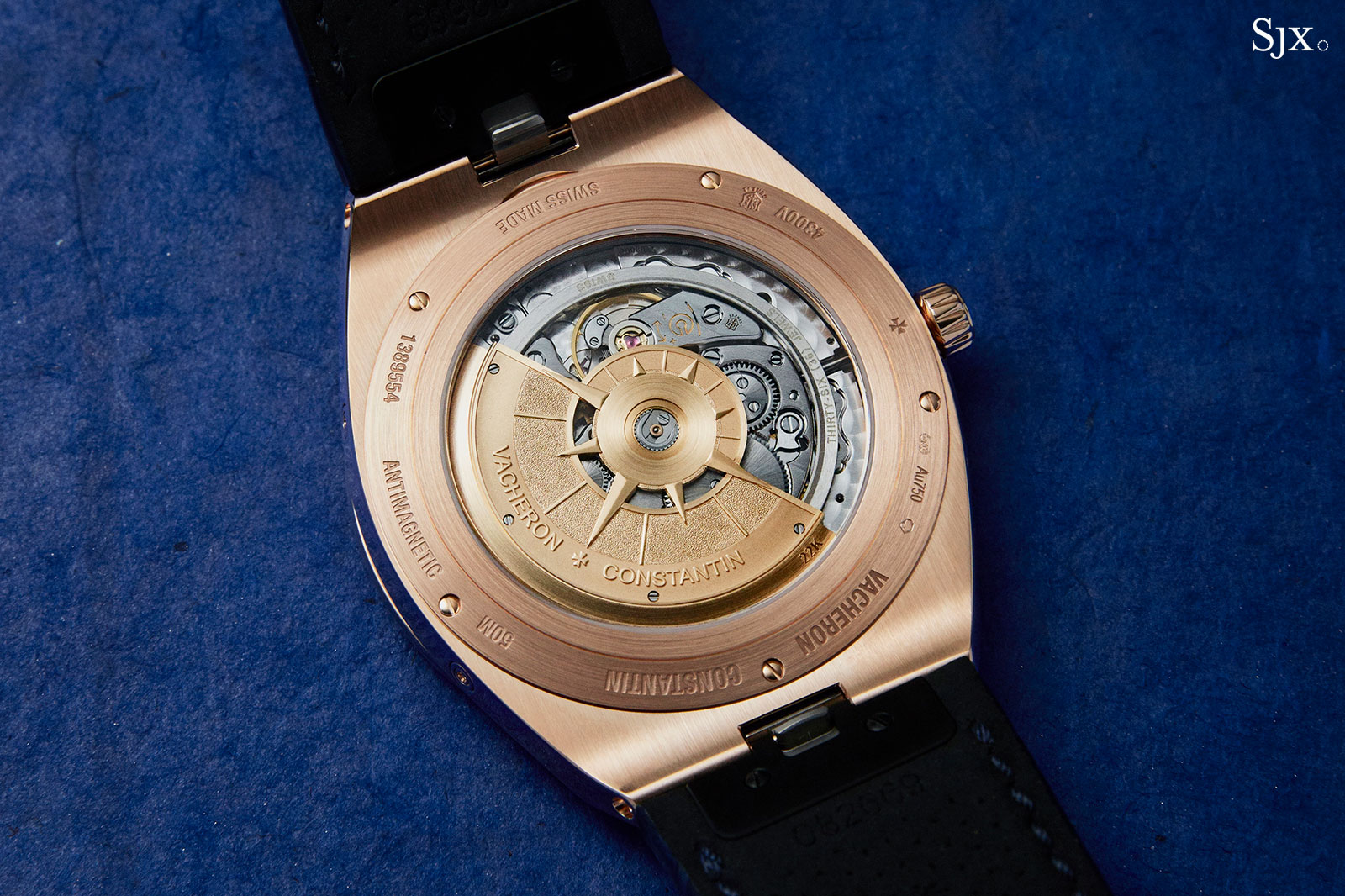 The quick-release tabs visible on each half of the strap

The case and bracelet are carefully and finely decorated, even on inner or recessed surfaces. The vertical surfaces in-between the notches of the bezel are brushed, while the inner angled faces of the bracelet links are mirror polished. That being said, the shapes and forms are not as complex as those found on the Nautilus or Royal Oak, which means the case is presumably slightly easier to finish.

It’s worth noting that the white gold model has the metal in its natural state, giving it a yellow-grey tinge but arguably better longevity.

Many white gold watches are rhodium-plated to create a bright, silvery finish that easily catches the eye. But it also brings with it the downside of making it more difficult to refinish the case since the plating has to be stripped before the surface can be polished. The dial of the watch is a conventional perpetual calendar. That means four sub-dials and so-so legibility, since all the calendar markings are small.

Even if readability isn’t the best, the dial is high quality. The hour markers and hands are 18k gold, and all of the printed markings are sharp, even on the sub-dials that have a concentric guilloche surface. The moon phase disc is unusual: while the moon is represented by the usual gold disc, the gilded dots for the stars are actually constellations, though they are minuscule enough to be barely noticeable. The best looking of the dial variants is the blue, which has a smooth, grained surfaced finished in semi-translucent lacquer. Mostly a deep, solid blue, this dial only reveals the translucency of the lacquer around the edges of the sub-dials, creating a subtle, nuanced finish that isn’t often found on perfectly executed but slightly stiff looking high-end sports watches. The primary reason for the old school calendar layout is the old school movement inside. It’s the cal. 1120 QP/1, an ultra-slim automatic movement that’s one of the longest lived calibres in modern watchmaking.

Originally introduced by Jaeger-LeCoultre in 1967 as the cal. 920, the movement was supplied only to the greatest names in Swiss watchmaking. Patek Philippe used it inside the original Nautilus ref. 3700 as the cal. 28-255, Audemars Piguet named it the cal. 2120 or 2121, and at Vacheron Constantin it was known as the cal. 1120 and 1121. Despite being decades old, the cal. 1120 is highly regarded for its sophisticated construction and reliability. Here it has been improved significantly compared to the original cal. 920 of 1967.

Besides the free-sprung, adjustable mass balance wheel and other unseen technical upgrades, it also features the Poincon de Geneve, or Geneva Seal. That means the movement meets both the decorative and functional criteria dictated by the hallmark.

But the age of the movement is apparent in its short, 40-hour power reserve. With most modern movements able to run for 70 hours or so, 40 hours is a bit short. Visually the cal. 1120 inside the Overseas is dominated by the 22k gold compass rose rotor, a signature feature of all Overseas watches. Though that takes centrestage, the movement is instantly recognisable as the cal. 1120 thanks to the characteristic beryllium ring sitting on ruby rollers that supports the rotor. Though invisible to the wearer, the under-dial perpetual calendar model is as well finished as the visible bits of the movement. Although the calendar mechanism relies on the same principles as much less expensive modules – like the common Dubois-Depraz module used by the likes of Montblanc and Habring² – it is built and finished to a much higher standard. So while inexpensive calendar mechanisms include pressed wire springs, all of the springs inside the Vacheron Constantin module are fabricated via wire erosion. 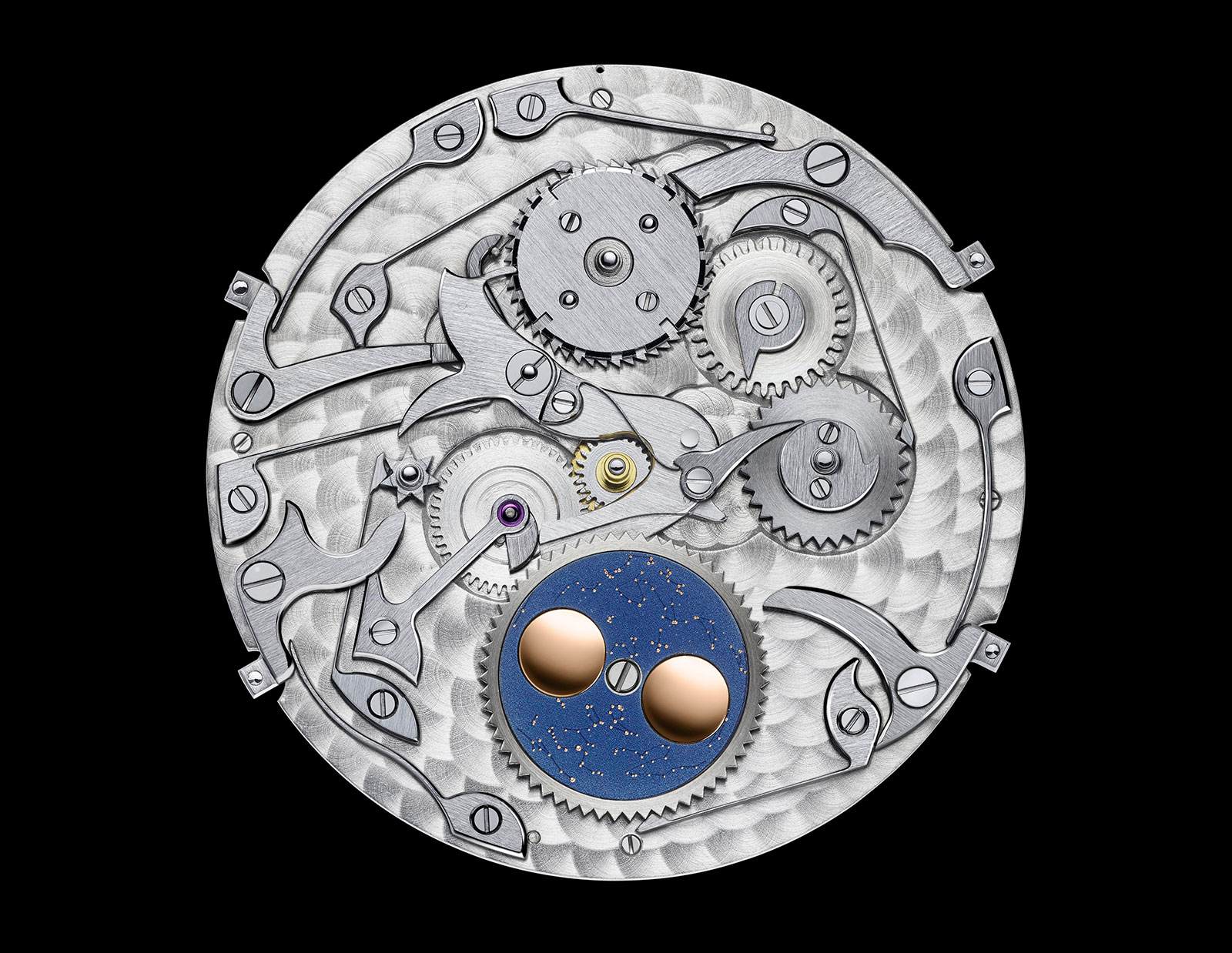 The inconvenience of a traditionally constructed module such as this is twofold. One is the need for a stylus or tool to adjust the calendar display, via the recessed pushers on the case band. And the other is the inability to adjust the calendar during the hours around its changeover at midnight; doing so might jam the mechanism.

More advanced perpetual calendars like the Ulysse Nardin Perpetual Ludwig are pusher-less and can be set at any time, but such watches are few and far between. The de facto standard setup is exactly as it is on the Vacheron Constantin – both the Royal Oak and Nautilus perpetual calendars function similarly – so the Overseas is not at any disadvantage relative to comparable watches. The Overseas perpetual calendar is well executed inside and out. Its only weakness is the inevitable comparison with the Royal Oak and Nautilus, both watches that have longer and more established histories in this segment.

The Nautilus Perpetual Calendar ref. 5740/1G is about 20% more expensive, so even though it’s a more fashionable watch right now, the Overseas is better value based on numbers alone.

In contrast, the Royal Oak – the original luxury sports watch – costs about the same as the Overseas. So nine out of ten buyers will, and already have, picked the Royal Oak. But that one buyer who both appreciates the quality and wants something different will pick the Overseas, which is probably why Vacheron Constantin limits demand and production by offering the watch only in gold.

The Overseas Perpetual Calendar Ultra-Thin costs US$90,500 on a gold bracelet, and US$73,500 on a leather strap. It’s already available at Vacheron Constantin boutiques and retailers.