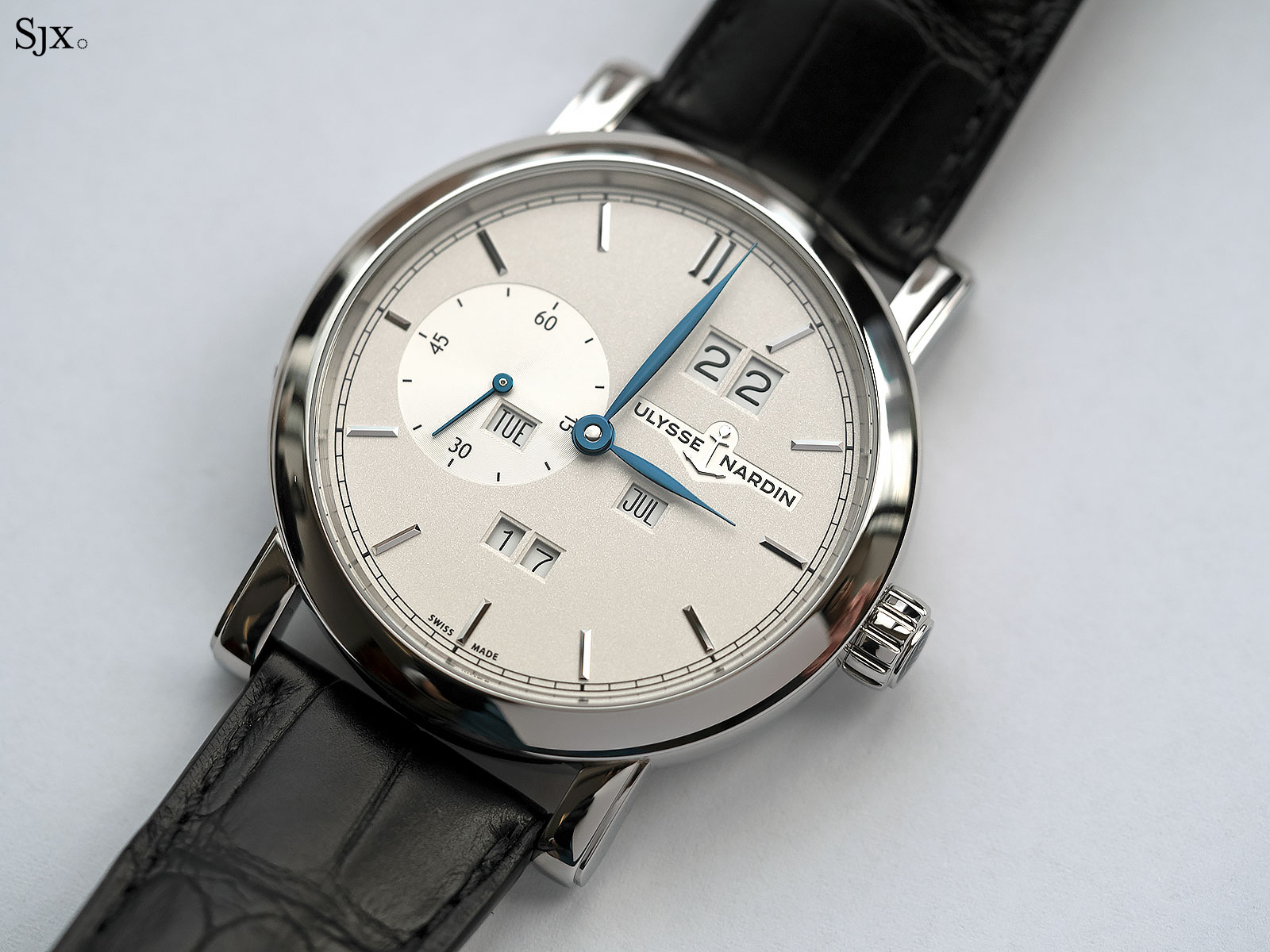 The original Perpetual Ludwig was launched in 1996 to mark the 150th anniversary of Ulysse Nardin. Its brilliantly conceived calendar mechanism showed the calendar in legible windows, while allowing it to be set backwards and forwards, even around midnight, via the crown – in short, the calendar could be set in any direction, at any time, without the need for any tools.

Subsequent iterations of the watch grew progressively bigger – unfortunately many got progressively uglier – but two years ago Ulysse Nardin rolled out the Classico Perpetual Ludwig (alongside other historical remakes), which stuck to the original styling, albeit in a larger case.

Powered by the same movement from 1996, the Classico Perpetual Ludwig remains an ingenious innovation despite being over 20 years old, and the new remake also manages to be good value.

The UN-33 of the Perpetual Ludwig 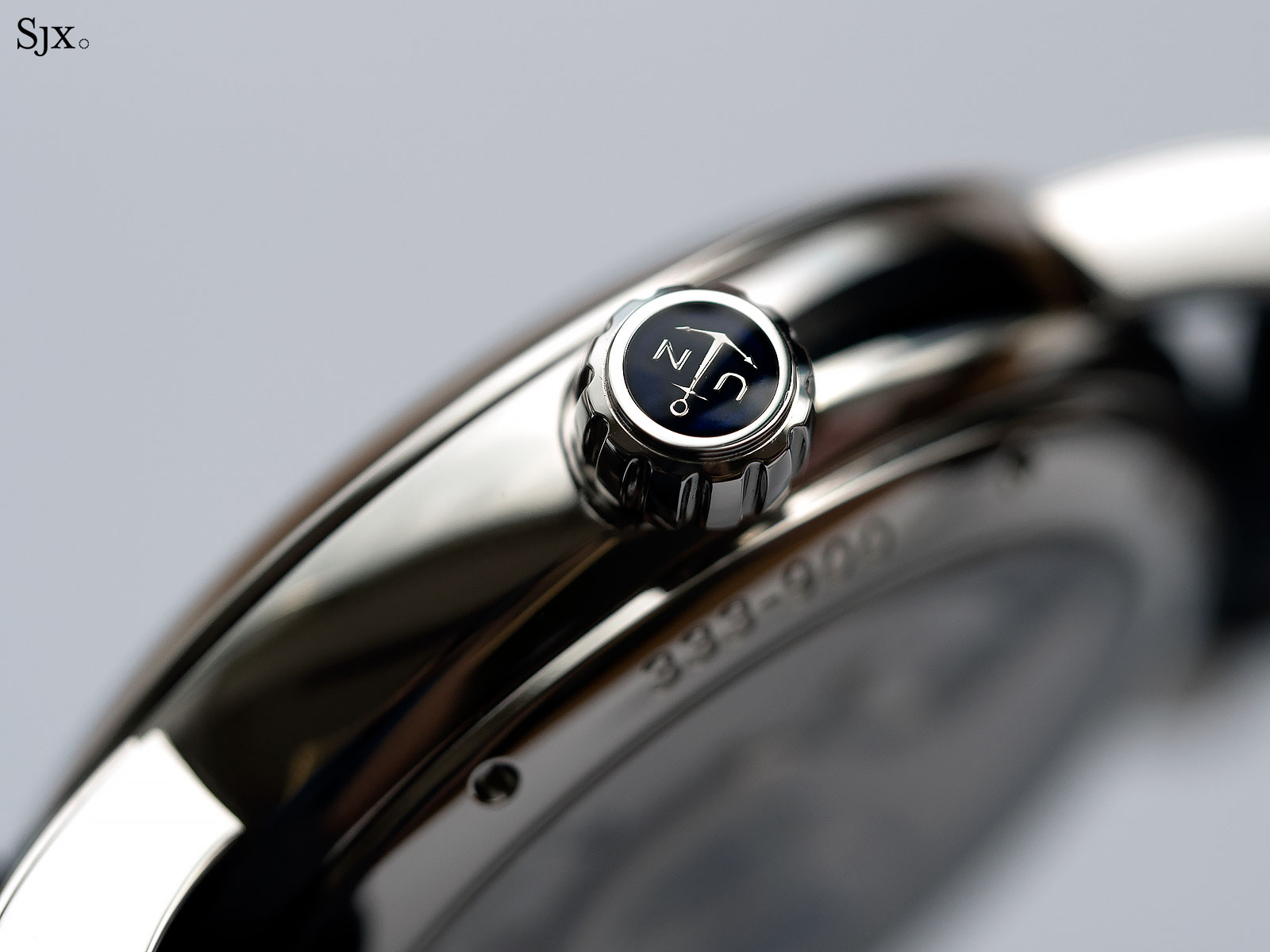 Ludwig and his wheels

The watch gets its name from Ludwig Oechslin, an inventive, self-taught watchmaker whose professional qualifications are in ancient history and archaeology. Working for Ulysse Nardin while it was owned by the late Rolf Schynder, a Swiss entrepreneur who made his fortune making low-cost movements in Asia, Mr Oechslin was responsible for the bulk of the brand’s inventions, from the Freak to the astronomical Trilogy of Time.

Mr Oechslin’s fundamental innovation in the Perpetual Ludwig – patents EP1351104B1 and CH696861A5 – was the use of stacked gears to operate the calendar, replacing the levers and springs in traditional perpetual calendars. This allows for the bidirectional adjustment, albeit at the expense of instantaneous changing of the calendar indications; the calendar displays change over swiftly, but gradually. 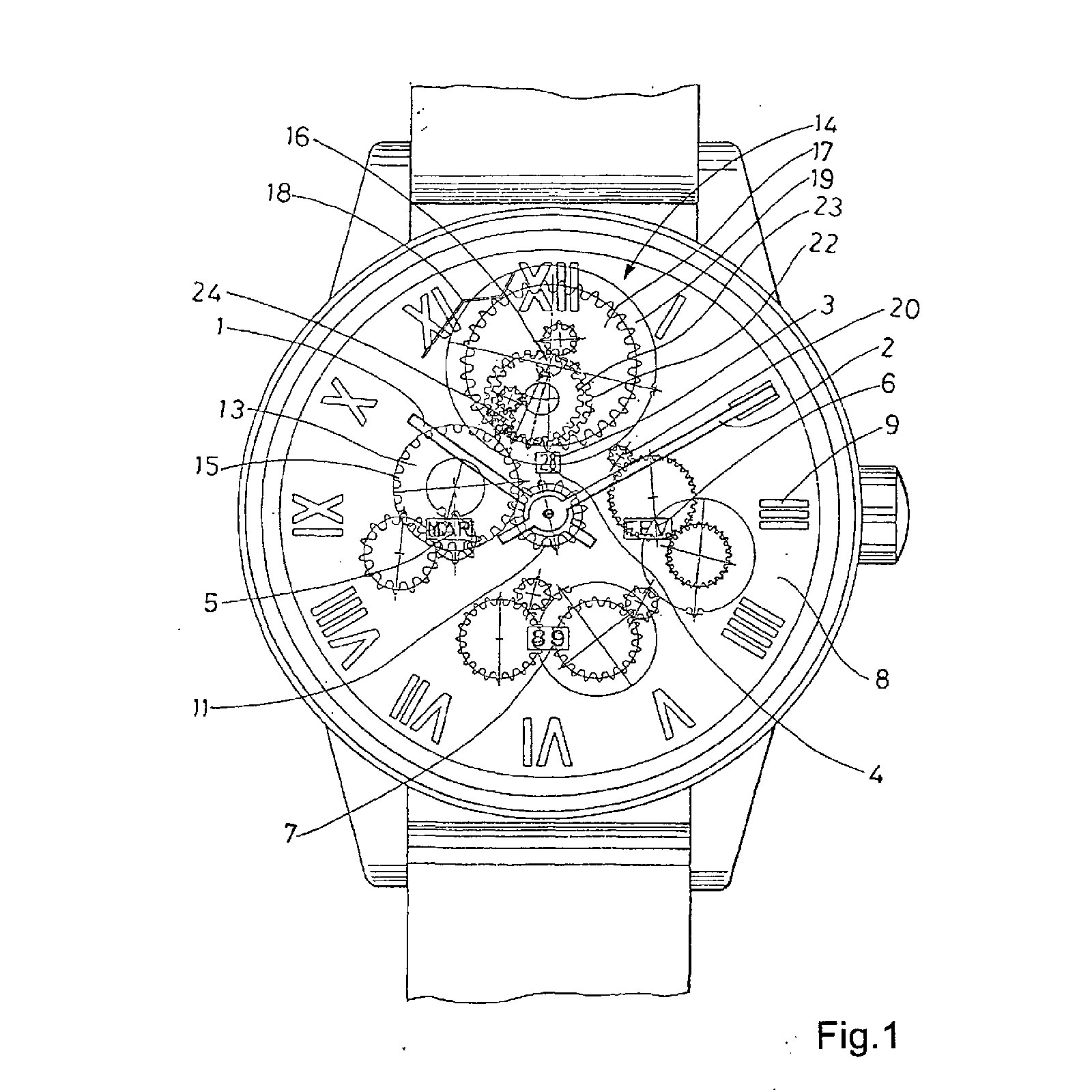 The wheels of the perpetual calendar, taken from Ulysse Nardin’s patent filing

Subsequent perpetual calendars have built on the work of Mr Oechslin, like the Cartier Astrocalendar devised by Carole Forestier, while Mr Oechslin himself has gone on to establish ochs und junior, a maker of innovative and minimalist watches in which Ulysse Nardin has a minority stake. But the Perpetual Ludwig remains the pioneer.

One of my earliest memories of the Perpetual Ludwig was a review on watch forum Timezone.com posted by someone name BAE (and the review is still available here, about two decades later). His review was enthusiastic and positive, as the watch deserved.

The original was classical in design, maybe a bit boring, although the wave guilloche dial gave it a bit of sparkle. Most of the later variations of the perpetual calendar were unattractive and over-designed, some to the extreme.

So it is fortunate that the Classico Perpetual Ludwig doesn’t try to be anything new, instead it replicates the look of the original. It doesn’t need to be said, but legibility is excellent.

Because the new Perpetual Ludwig is larger than the original, the calendar windows sit closer to the centre, but the dial has been tweaked enough to keep it looking balanced. The hands are naturally wider and longer, while the baton hour markers are slimmer but elongated, which also give the dial a cleaner look.

The dial surface is finished with a coarse, granular frosting that’s neatly done but not as refined as the guilloche on the original. Because the sub-seconds and logo are rendered with a different surface finished – concentric azurage and brushing respectively – they stand out from the rest of the dial, perhaps unnecessarily. The effect is to magnify the seconds, which is oddly large. Minor issues aside, the dial is overall good looking and well designed. 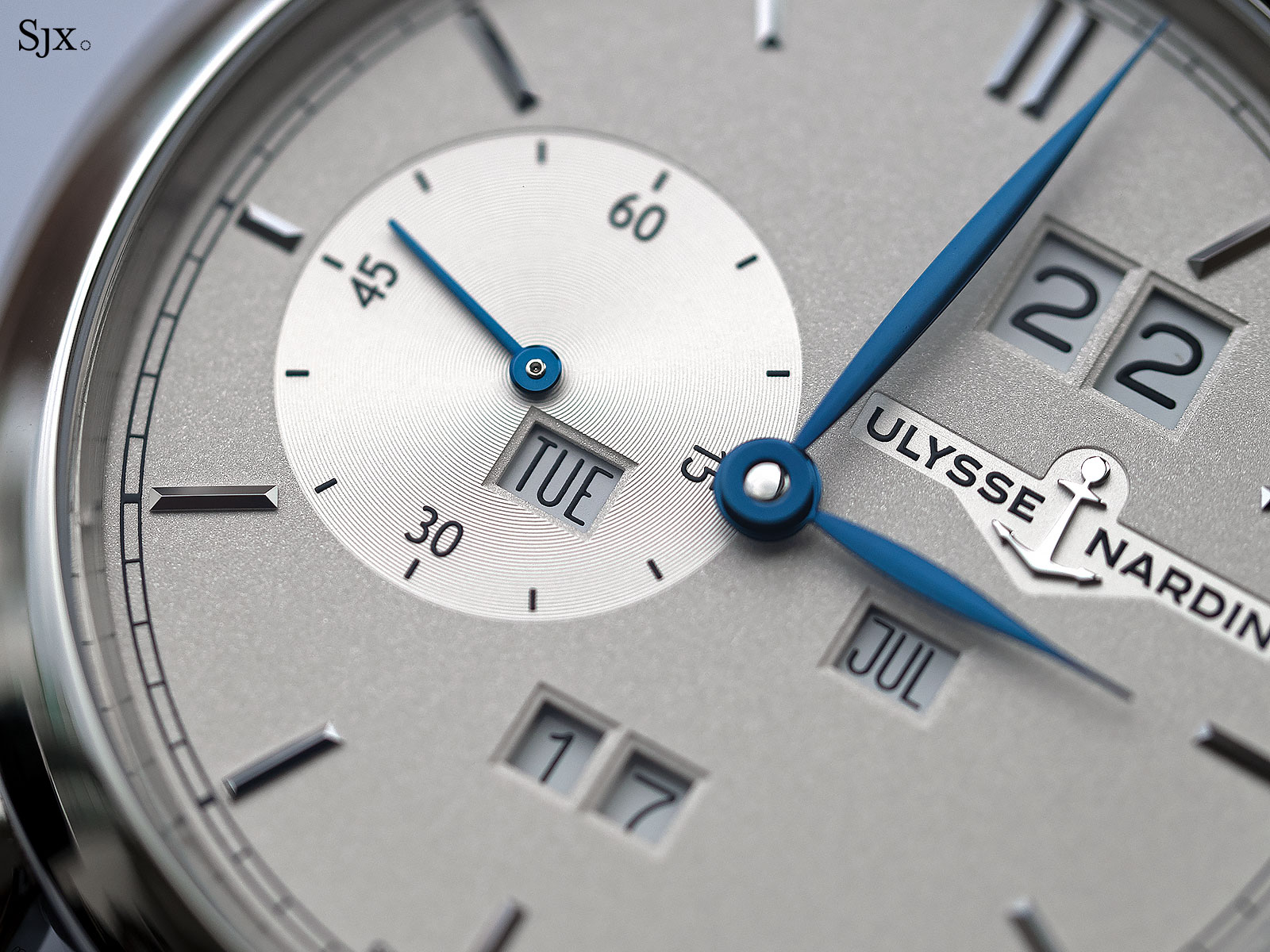 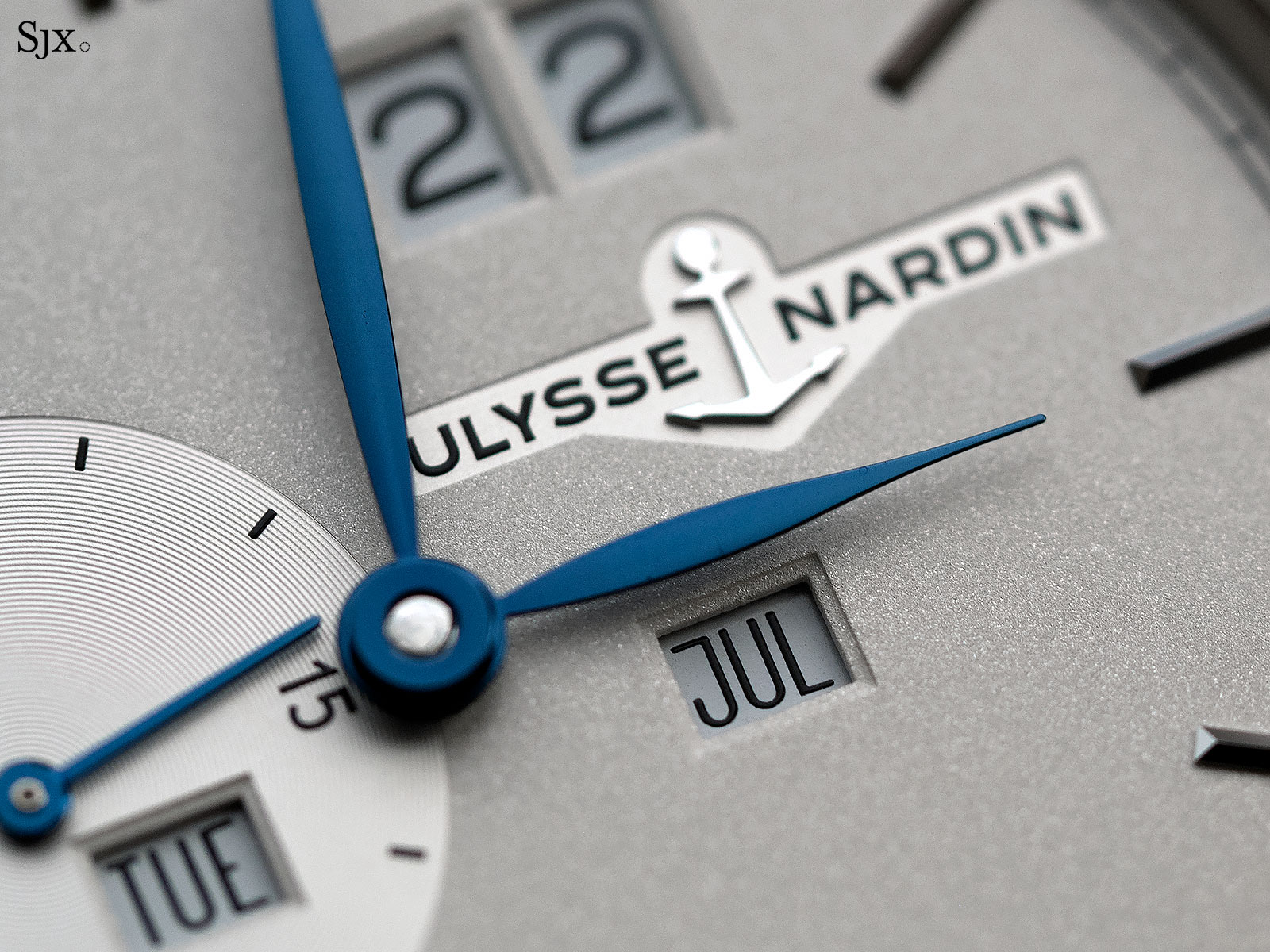 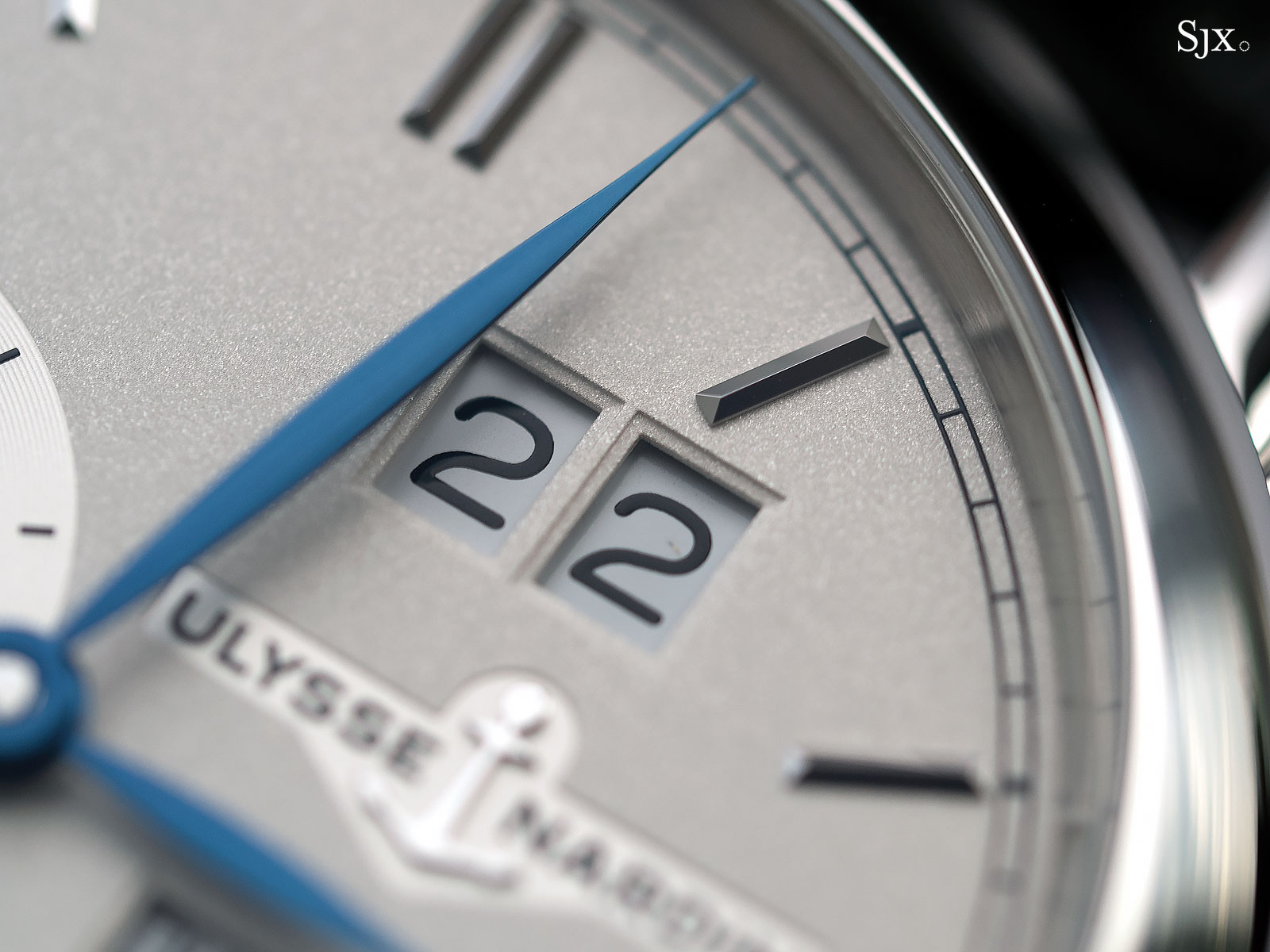 Although the dial proportions are harmonious despite the increase in size, the whole watch feels larger than it needs to be. Its thinness, combined with the wide diameter, creates a bit of a dinner plate effect.

In fact, the watch is actually larger than it needs to be. The UN-33 inside is only 31mm wide, and the original Ludwig managed to be just 38.5mm in diameter. An increase to 39mm or 40mm would have been workable, but the current case is about a millimetre too much. 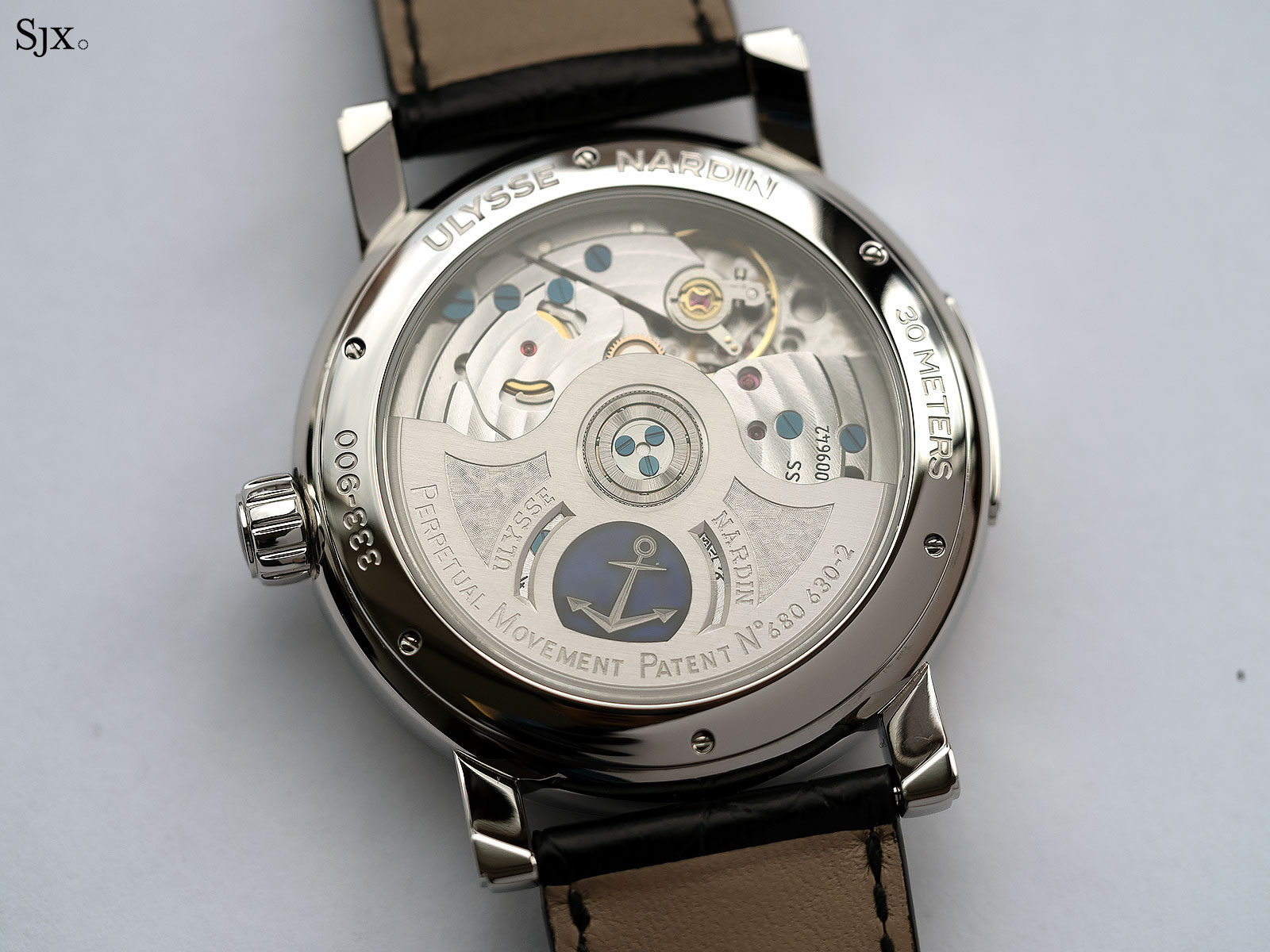 Visible through the back is the UN-33, which is a proprietary Ulysse Nardin automatic movement combined with the patented calendar module – the same calibre found in the 1996 original.

The base movement has an interesting history: it was developed in 1995 by Lemania for Ulysse Nardin as well as Ebel, then in the last years of its heyday. Based on the Lemania cal. 1340, the movement was conceived to be a versatile movement with the ability to be adapted to various complications.

The result was the Ebel cal. 137 (or Lemania cal. 1350), which was a chronograph movement that Ebel used to replace the Zenith El Primero. And the other was the UN-33 in the Perpetual Ludwig. Another derivative was the Lemania cal. 1377, now known as the Breguet cal. 582 in Type XX chronograph, and later the cal. 583Q and 584Q.

The UN-33 inside the Perpetual Ludwig is attractively decorated, with lots of blued screws, circular striping and so on, though done so industrially. But it’s well done in its price range, especially for such a complication. The decoration is neat and machine-made 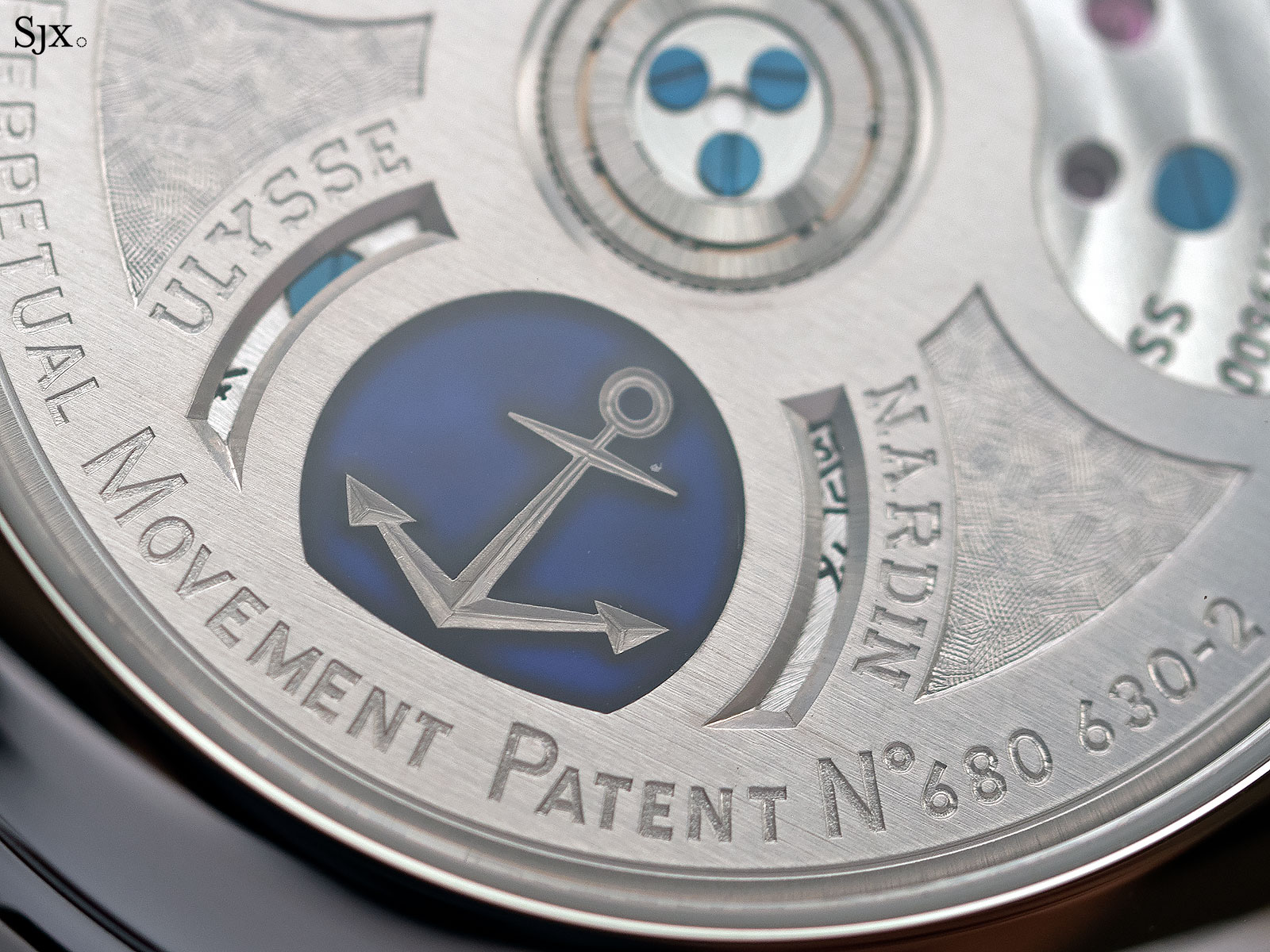 The blue enamel logo on the rotor, a common element in many of Ulysse Nardin’s in-house movements

A notable detail of the UN-33, and all its relatives, is the “Magic Lever” bidirectional winding mechanism that relies on a Y-shaped pawl.

Though invented by Seiko in 1969, the “Magic Lever” is now popular with Swiss watchmakers, including Vacheron Constantin, IWC and Cartier, for its robustness and thinness. Size aside, the Classico Perpetual Ludwig is the best accessibly priced perpetual calendar on the market.

There are cheaper perpetuals available – Montblanc is an example – but they are almost uniformly powered by the same ETA 2892 movement combined with a Dubois-Depraz module. While the combination is tried and tested, and no doubt functions well, it’s uninteresting.

Though it costs more than the very cheapest perpetuals, the Classico Perpetual is far more sophisticated and compelling.

The Classico Perpetual Ludwig (ref. 333-900) is available only in steel and priced at US$19,800. In Singapore it costs S$30,500 including GST. It’s already available at Ulysse Nardin retailers and boutiques.

A quartet of watches modelled on watches from Ulysse Nardin's distant, and more recent, history.